Before we dive into the WECC back-end of the curve, we’ll wander through current fundamentals. We do this because if there aberrant back-end markets it is most likely caused by anomalous front-end events. We are faders, APT is a fade system, and it’s always a good idea to know/understand what is driving these aberrations since once they are worked out of the front, their price impact on the back disappears.

On another note, you may have received a new Emailed Report called “Energy Oracle,” to be confused with the Oracle of Omaha, in this case, it is the Oracle of Eugene, also known as Garrett, or as we call him “GMAC.” Garrett will be publishing an “Oracle” every day and will be following a similar pattern that I do on my Front and Back updates. He first looks to APT Best, then looks at the shooting and falling stars, then highlights four trade ideas each day. His schedule is thus:

If you are not getting this and would like to, drop him a note ([email protected]); his Oracle is prepared the night before and is sent out at 4:35 AM PDT.

Before gandering at temperature, forecasts let’s look to actual loads as there are seismic shifts afoot, at least in the Northwest and Rockies: 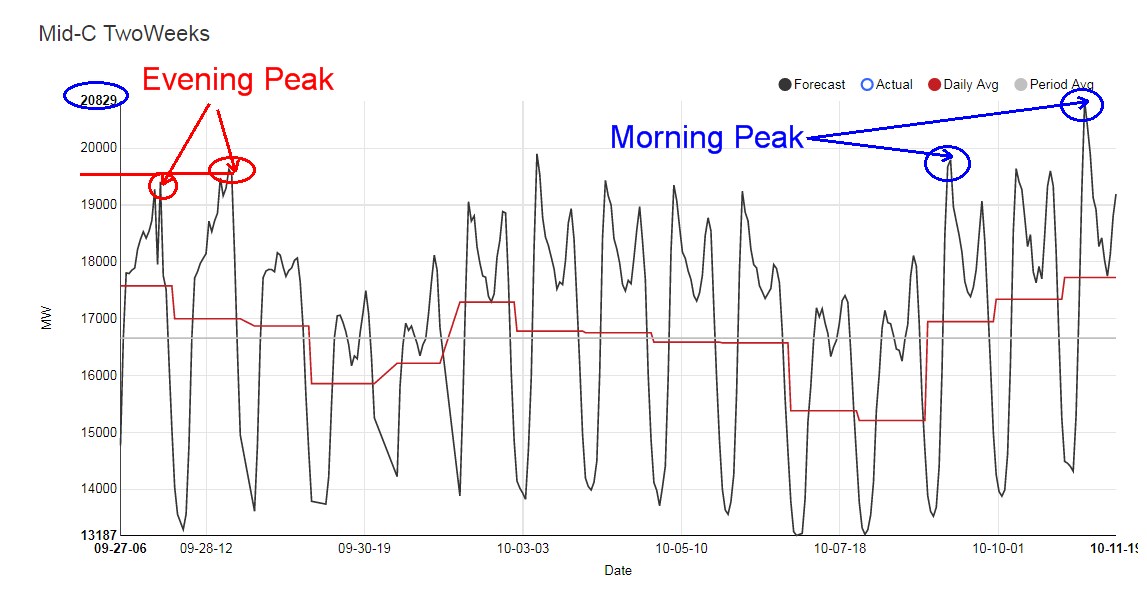 Twice a year you can see the Northwest swing from a “heating” to “cooling” system, which usually means from an Evening Peak to  Morning Peak. You see it in the above plot, but you also view the region reach higher highs (at least over the last two weeks), and those highs are happening in the 7-8 AM time slot. Winter is Coming!

Something similar is taking place in the Rockies as reflected by PSC’s loads. Where the ute was pure evening peak last week, now it is morphing into a dual peak. Not as dramatic as the MidC, but it is taking place. 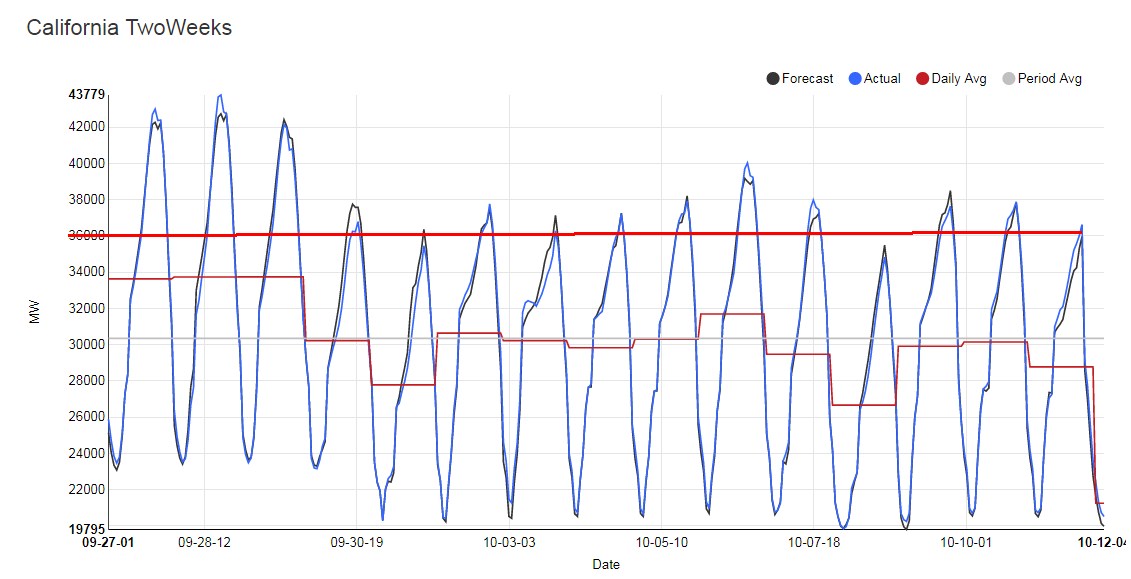 Loads inside California (ISO + nonISO) are uneventful, which is surprising given that recent cash has been surprisingly robust:

Even the MidC joined the party, check out those heat rates, and even more remarkable are the strong LL prices from two days ago all of which suggests a hint of what those heating loads do to the intra-day prices. 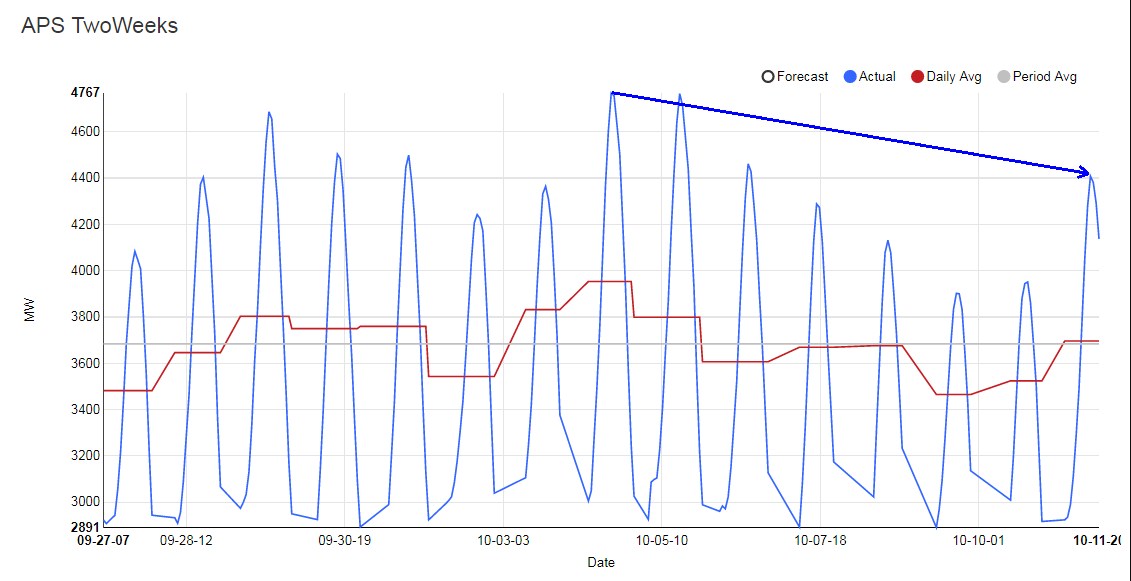 To conclude our walk through load-land, we took APS as an example of what is taking place in the Southwest. Still, an evening peaking system, still cooling degrees are driving prices, but those are falling off as temperatures decline. The saving grace at PV will be the fall maintenance and its surrounding hubs heating loads.

But don’t expect cooling loads to drift away just yet, not in Arizona, the state will enjoy low to mid-90s for another week, then high 80s to low 90s beyond. Denver doesn’t get cold, yet, but that is coming. 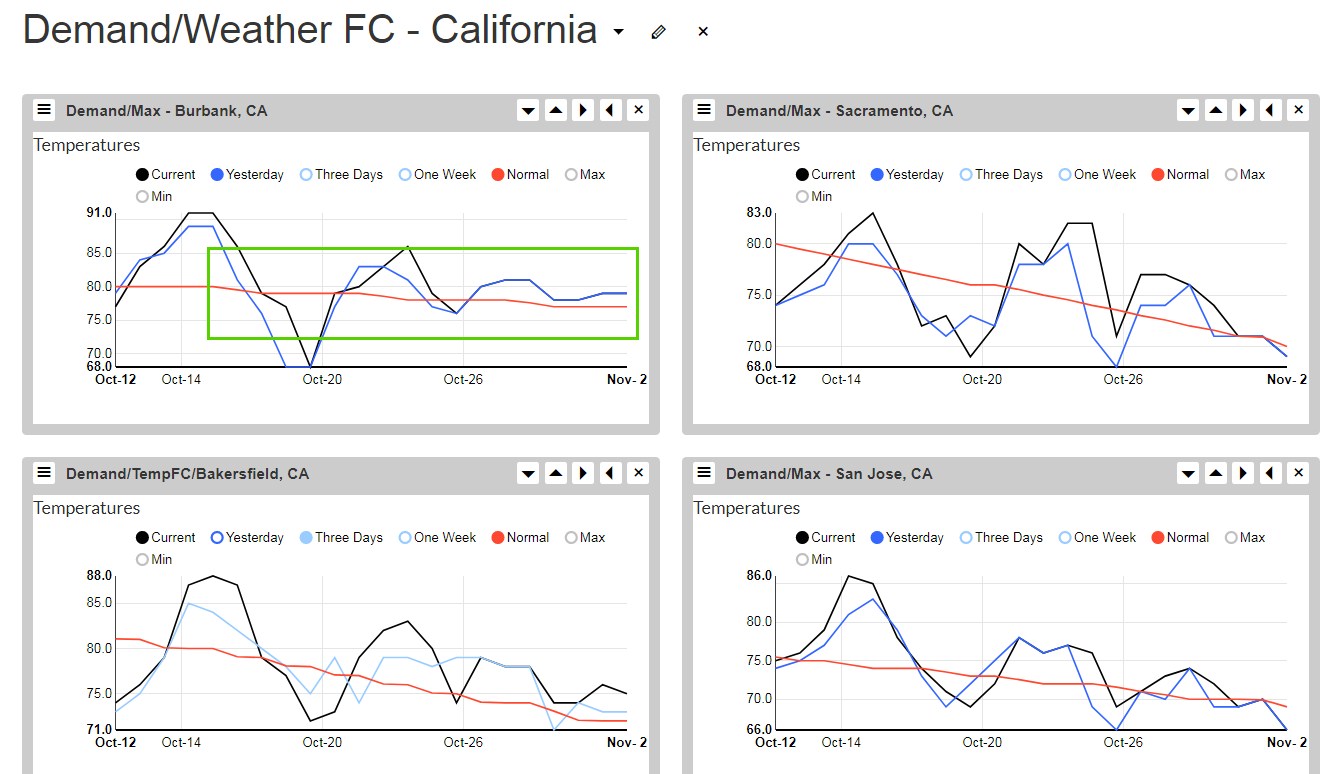 California sees new heat (same that was there on Monday, but it didn’t go away) but, alas, those two hot Burbank days fall on Saturday and Sunday; then the LA basin will wallow in beautiful, and mild, days — which should make for a lovely WSPP. We’ll be there, look us up for a beer. 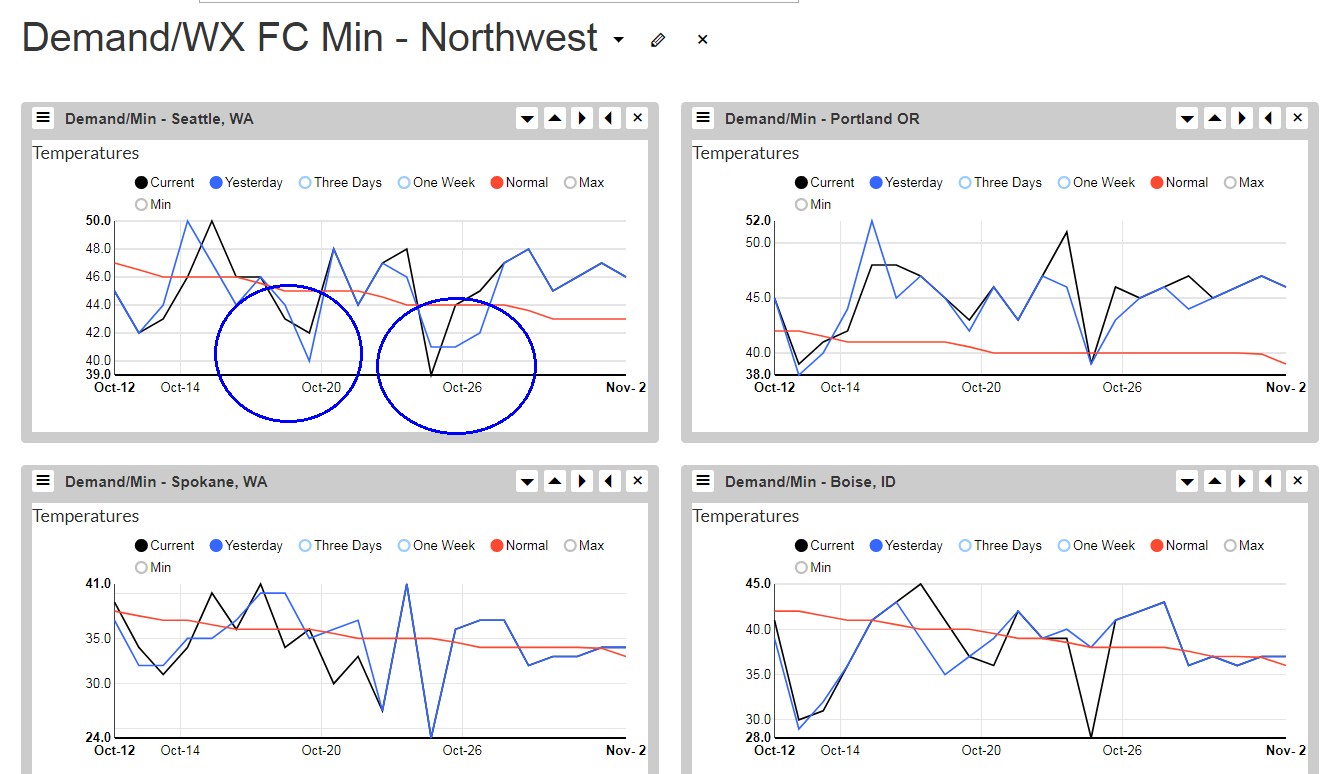 The Northwest will be pleasant, too, though there are a few days in Seattle where temperatures (at night) drop into the low 40s which will keep the pressure on the off-peak markets. 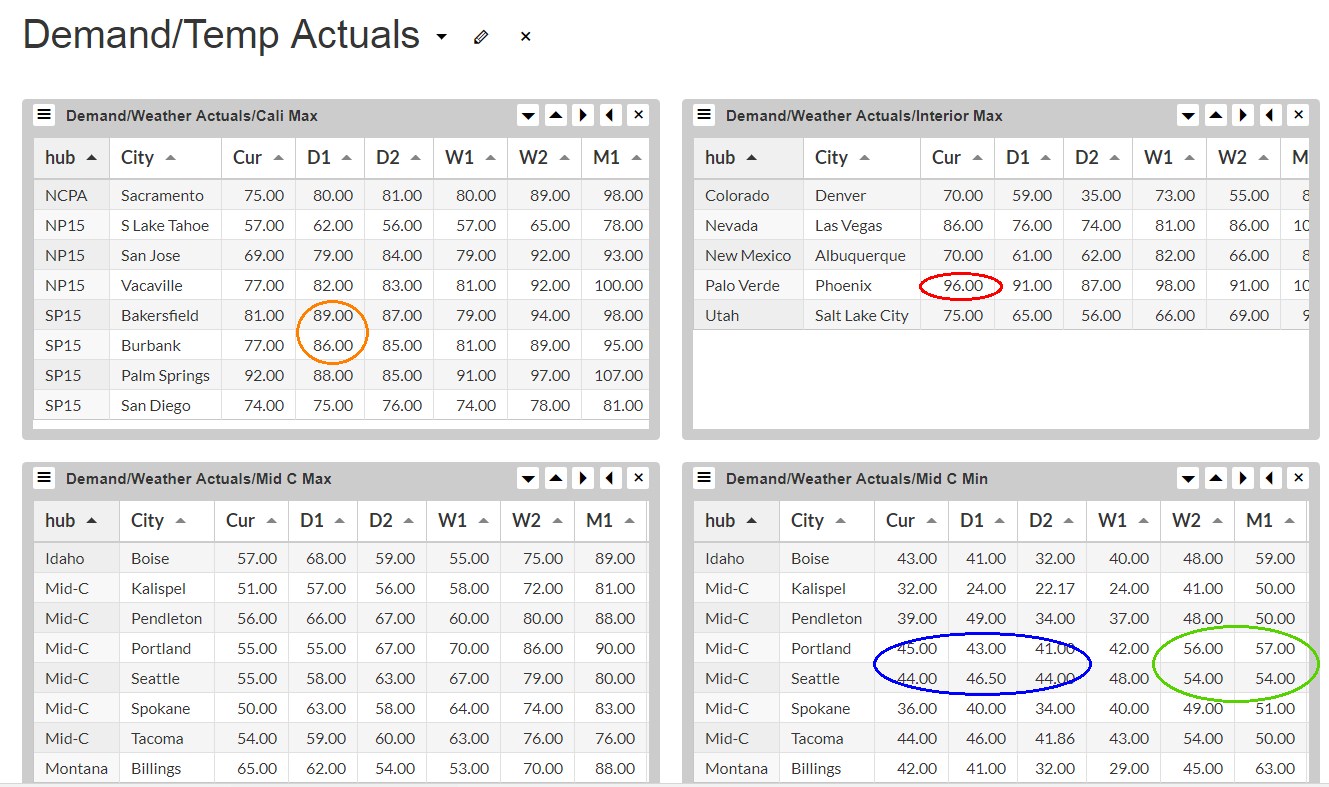 Firm prices two days ago, but hard to find the reason in the temperature (realized) table, just the mid-80s in Burbank. Look at the changes in lows at MidC (Seattle – Portland) – dropped about 12 degrees which is all it took to morph to heating load.

The big gen news is the PV nuke going down for its refuel; coupled with other coal and gas maintenance; the hub might remain tight for a while. 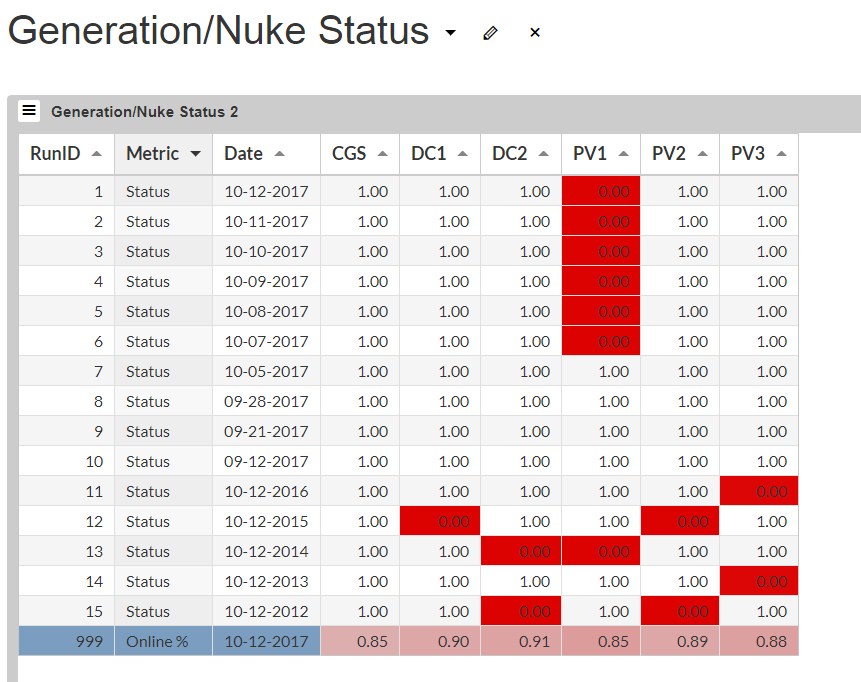 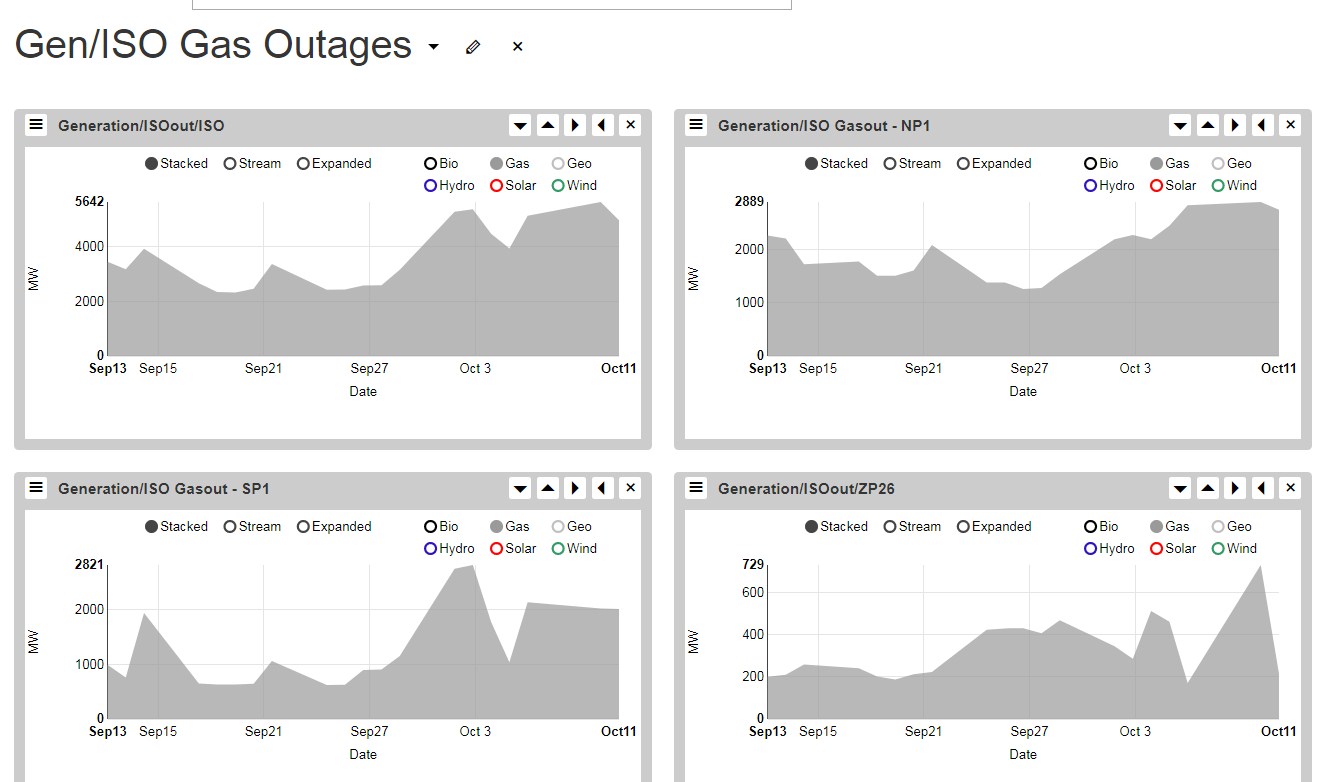 The outage season has commenced inside the ISO, but no significant changes from Monday: 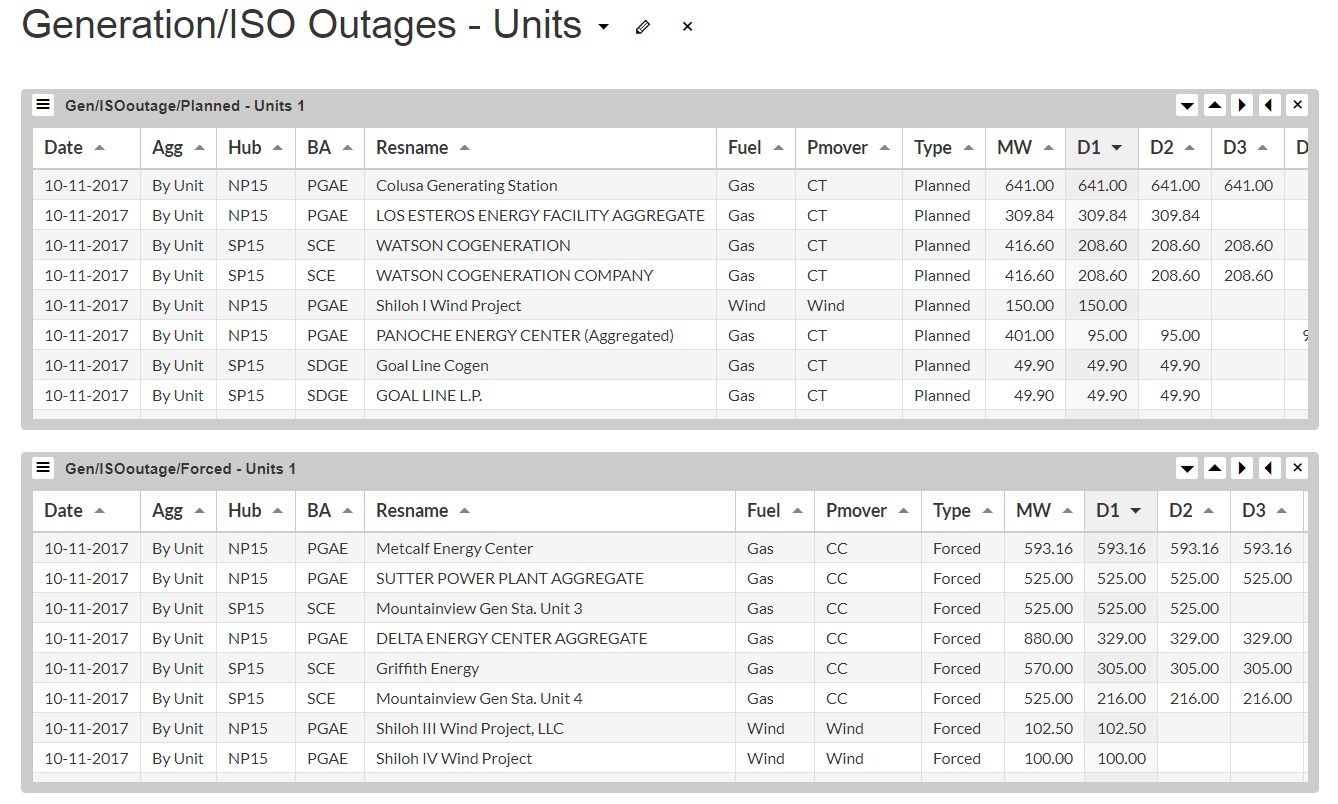 There is about an equal split between planned and forced, at least this week. 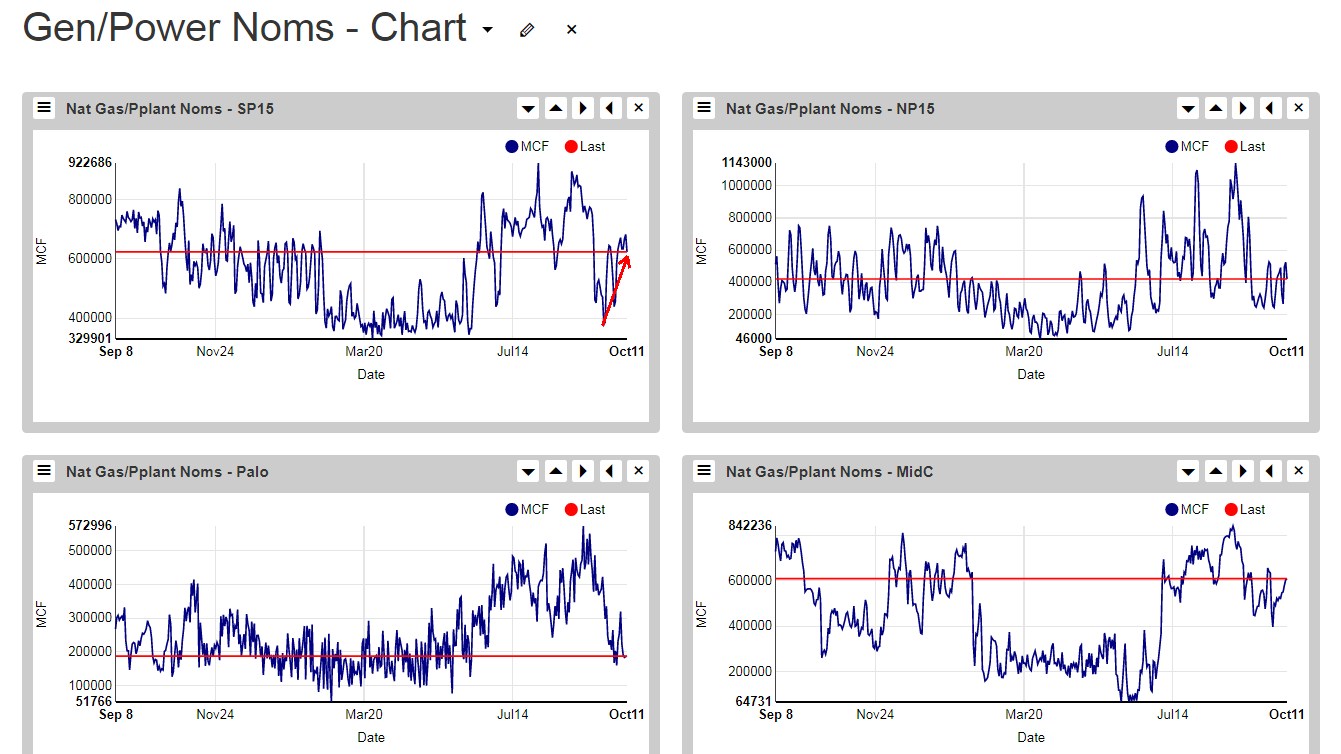 SP gas noms have rallied, way more than NP, but that comes as a surprise given that NP is trading at a significant premium to SP. MidC noms remain strong which is driven by tight water and the first hints of heating loads. Palo noms are weak, but its price isn’t. That hub will have plenty of reserves waiting for an opportunity and will put a cap at on prices. 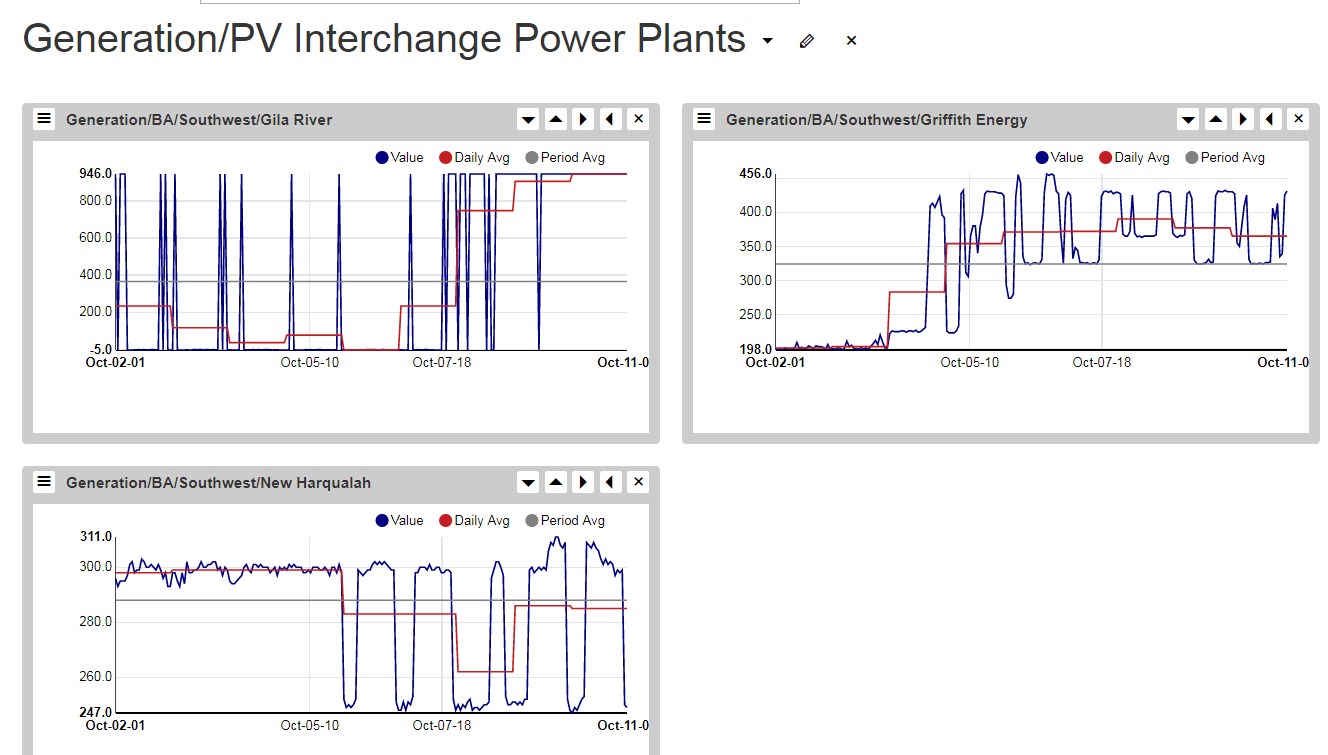 Historically, all three plants are running harder this year than they have in the past, but temperatures are also higher this week than they were in the past couple of years. 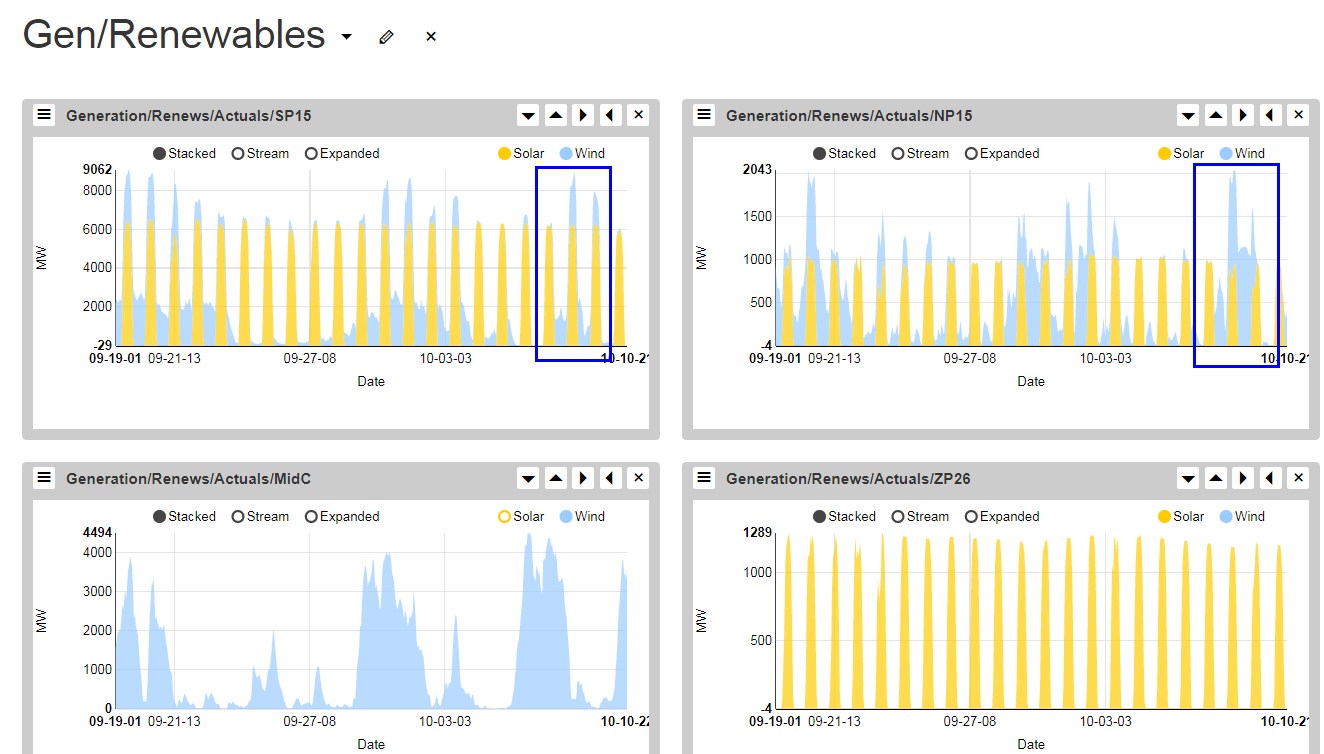 The wind blew, and that didn’t just blow for the ISO longs, it also fueled and fanned the raging fires in Napa. Our hearts go out to those victims of yet another eco-disaster in the Golden State; we also suggest going long Napa Cab futures as some of the world’s most cherished vines have perished in flames.

We’ve been beating the reservoir drum for most of the summer. The mantra was “full reservoirs are bearish, ” but now we need to pause as the reservoirs are not as full, relative to prior years. The MidC ponds are currently below average, and the BC overhang has almost been worked off. Kally remains an over-flowing tub, but there is an end in sight there, too.

The rate of deceleration on both the On and Off-peak ISO hydro energy has picked up. In fact, hydro in the ISO is falling hard. Let’s look closer at the ISO hydro:

In the past, we’ve pointed out the pause in declines from a few weeks ago, but now every metric realized a significant drop, week-on-week. This most likely is due to the state seeing its load drop and they are now husbanding the scarce resource, especially given the very dry outlook the land is facing for the rest of October:

Nary a raindrop to be found for the next twenty-one days; no relief from above to save those precious cab grapes. Opus  One will be selling for $1k, mark my words.

The MidC isn’t dry, not in the next ten days, but then it too swings dry. Not a big deal, the water year is still young, and October anomalies are meaningless unless they are like last year where Portland received 10″ in October. Doesn’t look like she’ll get that this year, and with reservoirs below average, we can see BPA tightening up the spigots, especially when the DC is down.

Powerex is already tightening; Mica is setting five-year lows, and so are flows on the Columbia at the border.

Granddaddy Coulee continues to draft, even while knowing the DC is going down. We’d be surprised if the MidC has any cataclysmic meltdowns over the loss of that 3k MW export; most will come out of backed down gas units.

Yes, the DC is heading to zero, but that news should be priced in. The big question is “will the outage be extended.” Current plans suggest not, but those have been known to change once work begins — watch BPA’s TTC plans closely over the next couple of weeks.

While the line is up, the Northwest has been filling it; note how many times exports hit TTC caps. Same on the AC. Now the Canadians are backing off their selling; they even bought for a few hours. We mentioned backing off gas to absorb that 3k loss in Net Demand; we think our friends to the north will incorporate some of the pain as well. The balance will be picked up by heating loads and refilling, or at least not drafting, the reservoirs.

It’s choppy, but we’re in transition mode and that is to be expected. Our take on the WECC term markets to follow in a subsequent post.