With all the heat from the past week making its mark on high-elevation snowpack, let’s take a look at how it’s affecting the sideflows.  The Entiat, Methow, and Wenatchee sideflows all increased by more than 50% week-over-week, though the Entiat had a sharp decline day-over-day.  The sideflows of the Lower Columbia and Sanpoil were the only two rivers to show significant decreases (more than 8%).

The Okanogan didn’t have large week-over-week increases, but that’s mostly because it has been flowing heavily for a while now.  As of yesterday, the Okanogan had already surpassed the highest flow from each of the past five years and falls short to just 2011 (which peaked on June-16th).

One last look at Northwest rivers for today, as the Spokane is forecasting one last increase culminating tomorrow afternoon at 15,348 CFS. 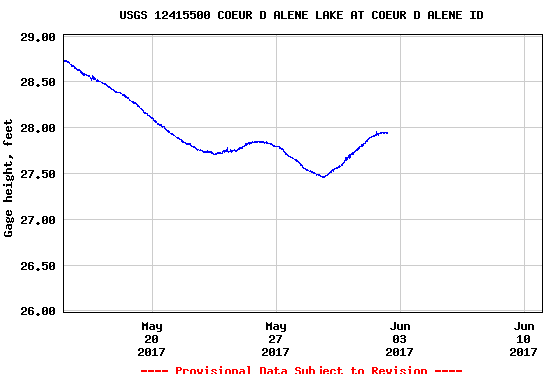 The peak tomorrow makes total sense if you take a look at the USGS Lake Elevation chart for Lake Coeur d’Alene (the source of the Spokane River).  We see the effect of last week’s heat which ultimately increased the lake half a foot, and also see that the lake is no longer filling as of right now.

STP still up heavily over the 10-Day Forecast.  The RFC calls for a low of 26,574 aMW on the 3rd followed by steady increases through the rest of the forecast.

Most of Mid-C’s spring has been spent with demand well above last year’s levels, though the past two days have been one of the few exceptions.  Yesterday finished 150 MW below the same date in 2016, the first year-on-year decline since May 12th.

Slight changes to Spokane’s forecast this week – basically a couple degree increase each day through the 8th.  The new high on the 7th comes in at 86, which could likely be the second-hottest day of the year.  The largest difference is starting to show up two weeks from now where we are now forecasting the next 80-degree day on the 15th.

Seattle is quickly dropping back to reality after last week’s preview of summer as the daily high should sit in the mid-60’s through the weekend.  There isn’t a forecasted high in the 80’s through the next three weeks, though mid-June is trending up compared to yesterday.  The 7th also had an adjustment, moving from 69 to 73 and making a brief stint above normal in the process.

Burbank is forecasting a high of 85 on the 6th which could surprisingly equate to a new ten-year record for that date.  The rest of the three-week forecast will hover just below normal, and incidentally just below 80.

Unlike Southern California, San Jose is expecting a warm up in Mid-June with temps as high as 84, four degrees warmer than forecasted yesterday.  Other than that quick spike in temps however, it’s looking like a mild end of Spring for the Bay Area as well.

Move north-east 100 miles and it’s a different story, however.  Sacramento is showing temps as high as 96 by next week, a big change from yesterday and 11 degrees above normal.  We should see them warm up again in mid-June as they briefly peek above 90 for consecutive days.  Will be slightly cooler than normal this weekend as the 4th is forecasted at just 81.

Phoenix is on pace for a new 10-year high on the 9th as the forecast calls for 109 degrees, seven above normal and two degrees hotter than what was forecasted yesterday.  The area should stay in triple digits through the 14th where it will cool down to a brisk 98 before diving back into the mid 100’s through the month.

Gas Demand continues to drop in Mid-C where it now sits at 953 MMCF, though it’s forecasted to drop even more (down to perhaps a new minimum of 819 MMCF).  We saw a similar drop year as well as demand fell to 884 MMCF on the same day in 2016. 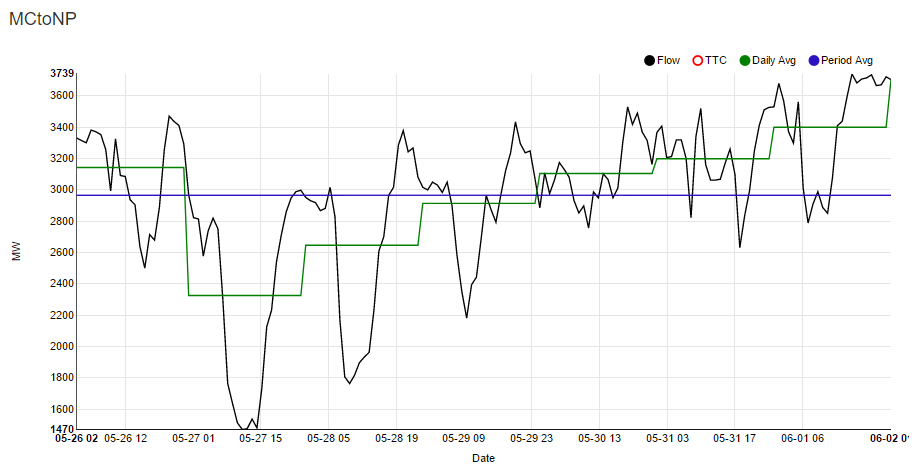 Trend is your friend this week as we’ve now seen five consecutive days of MC-NP growth in flow.  Flow hit a low of 2325 MW on the 27th, but has now seen the daily average increase to 3399 as of yesterday.  Flow also hit an hourly high of 3739 yesterday, the highest point in the previous seven days. 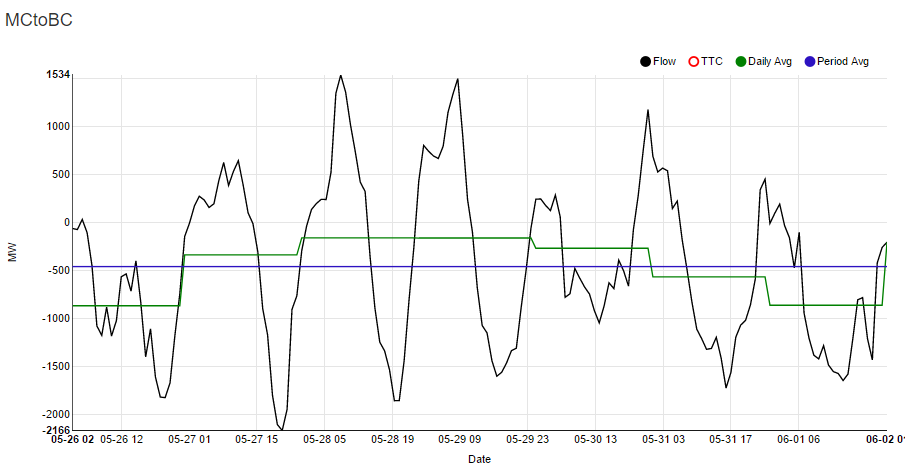 We see the opposite trend on the other side of Mid-C where the daily average reached a high of -161 on the 28th and has dropped four days straight since, eventually culminating in a low of -862 MW yesterday.  Flow hasn’t moved north since the first two hours of yesterday morning, though we are seeing less dramatic shifts in flow as well as the daily high and low differ by just 1500 MW compared to 3000+ late last week.