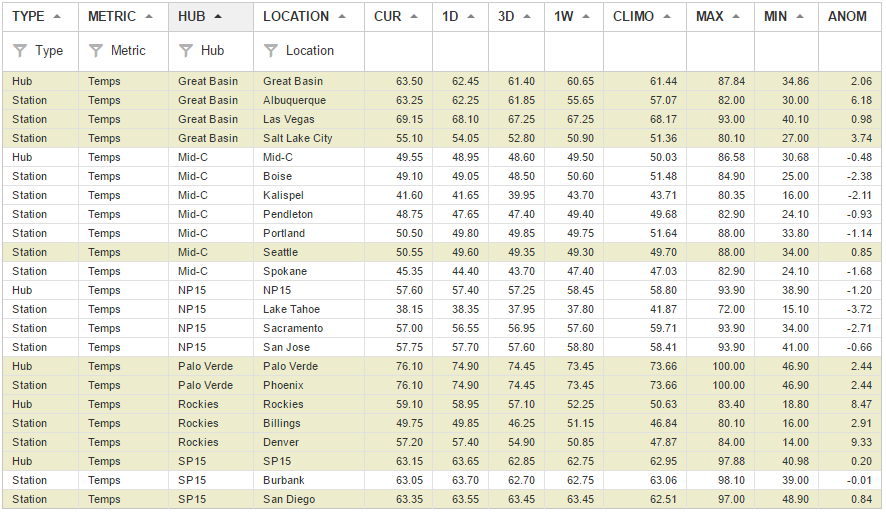 There is a split in the West’s temperature forecast as the Northwest and Northern California are set to dip below normal while the Southwest and the Rockies should settle comfortably above. 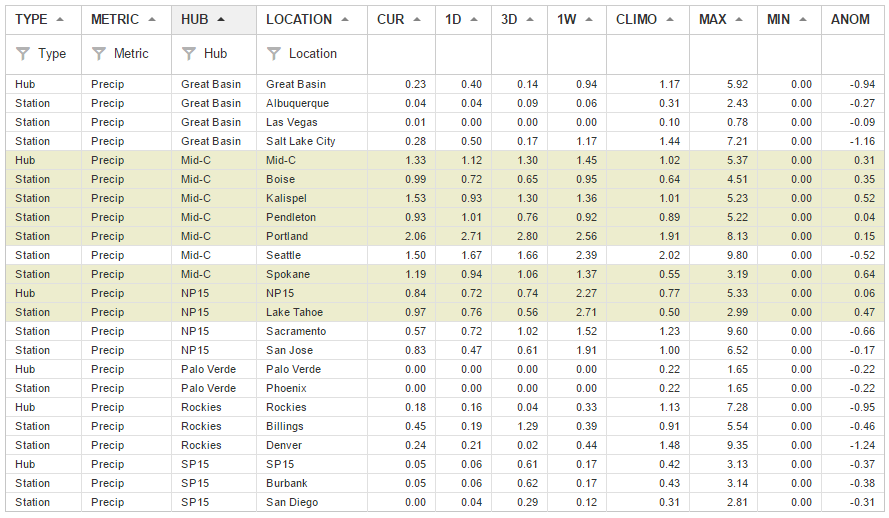 The precipitation forecast is almost a mirror image of temps as it’s now the Mid-C and NP-15 forecasting above normal precipitation levels.  Cooler temps and wet weather in April…looks like the snowpack could continue to build as we approach a month deep into spring. 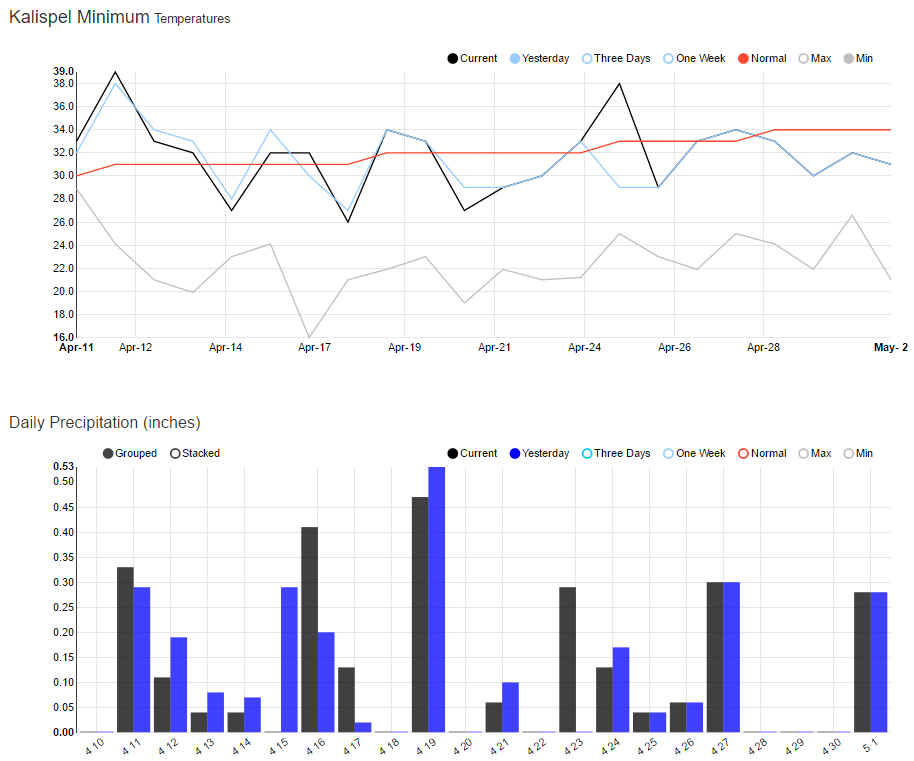 Kalispell is set to dip below freezing several times over the next ten days, and if it’s freezing at 2950 feet, the surrounding mountains will be freezing as well.  Couple those temps with the region’s forecasted precipitation and we should see significant snowfall in the Clark Fork and Flathead snow basins. 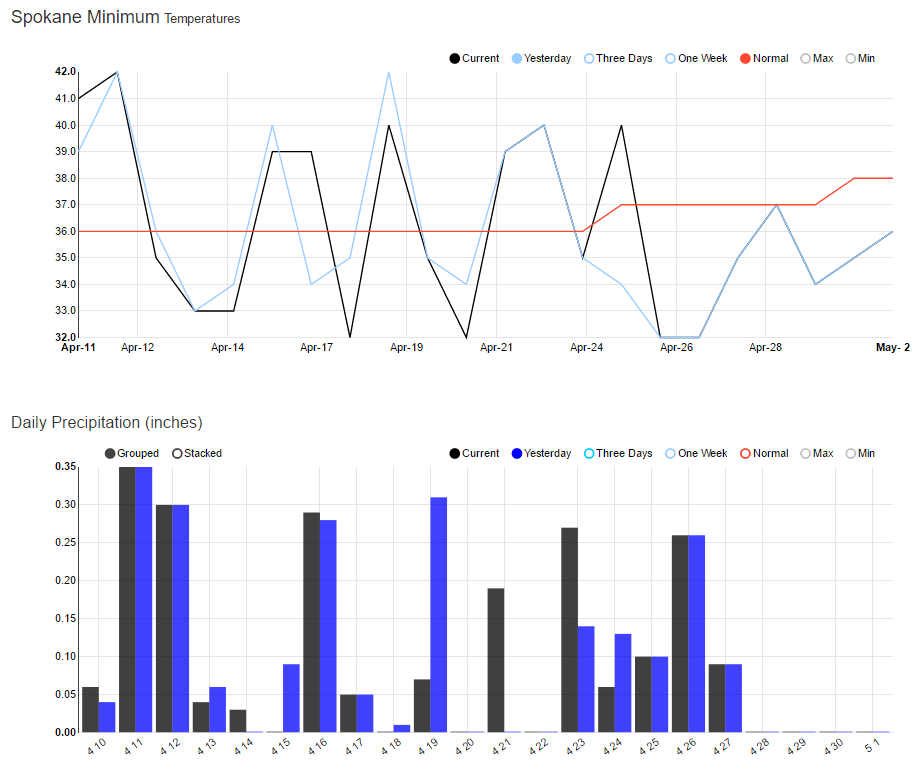 Spokane’s forecast is much more erratic than Kalispell’s as minimum temps alternate four degrees above and below normal seemingly everyday.  Several of the cold days align with moderate precipitation which should continue to delay the runoff and add to the snowpack.

Another week and another warm Denver forecast.  The daily max temp will reach a peak on the 13th at 78 degrees, 15 degrees above normal, and should stay elevated well into next week until it finally drops below normal on the 20th.  Also a chance for a new 10-year high on the 17th as temps are forecasted to reach 74, two degrees above the 10 year high.

It’s not a dramatic change, but San Jose is forecasting a couple degrees cooler over the next week than what was forecasted yesterday, and with temps well below normal already, the max temps on the 13th is approaching 7 degrees below what is typically seen.

Things are even more dramatic on the other side of the forecast where a new 10-year low could be set on consecutive days.  The 13th is forecasted just a hair under the old record (44.1), while the 14th is a full degree below.

Cool Bay Area weather has ultimately added up to lower degree days as San Jose is 22% below normal.  SP-15 has had an even more extreme April as degree days are more than 40% below normal in both Burbank and San Diego. 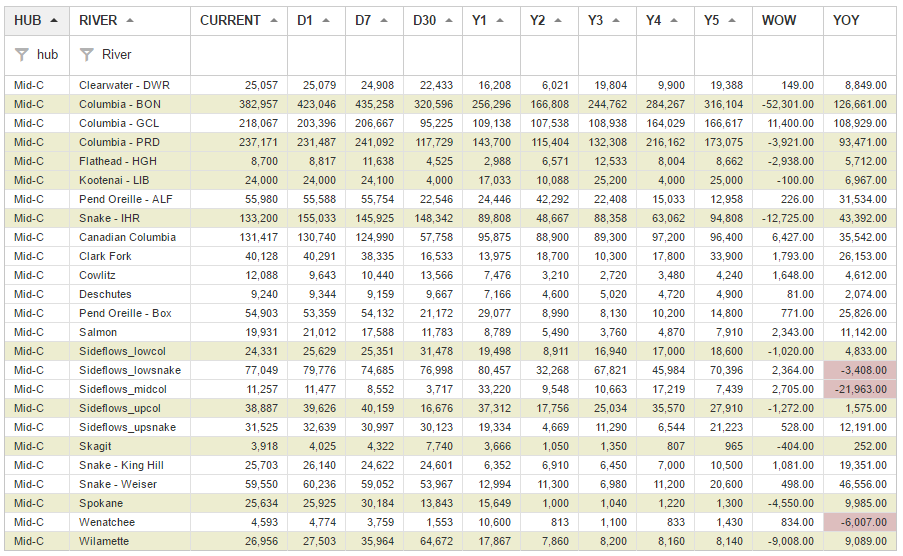 Mixed results for Mid-C rivers as there is close to an even split in increased and decreased weekly flow.  The largest nominal changes unsurprisingly came from the Columbia where Bonneville dropped 52,000 CFS, and Grand Coulee added 11,400 CFS.  The Snake at Weiser increased just 500 CFS but is still a massive 46,000 CFS above the same point last year.

The 10 Day River Forecast Center is projecting a peak on the 13th at 27,458 MW, roughly 600 MW higher than STP, and just a few MW lower than yesterday’s forecast.  Next week’s forecast was adjusted lower compared to what was shown last week, with some days coming in 300 MW lower.

After consecutive days of decreases last week, gas outages have climbed back above 6000 MW, now reaching 6236, more than 4000 MW higher than what we saw at the beginning of the month.  Meanwhile, solar has nearly completely returned online, now with just 90 M of outages, though that has been partially offset as wind outages increased to 194 MW.

With the latest drop in Great Basin gas demand, gas fell below the 365 day average of 424.  Compared to the same day last year, gas demand is nearly 50 MMCF lower.