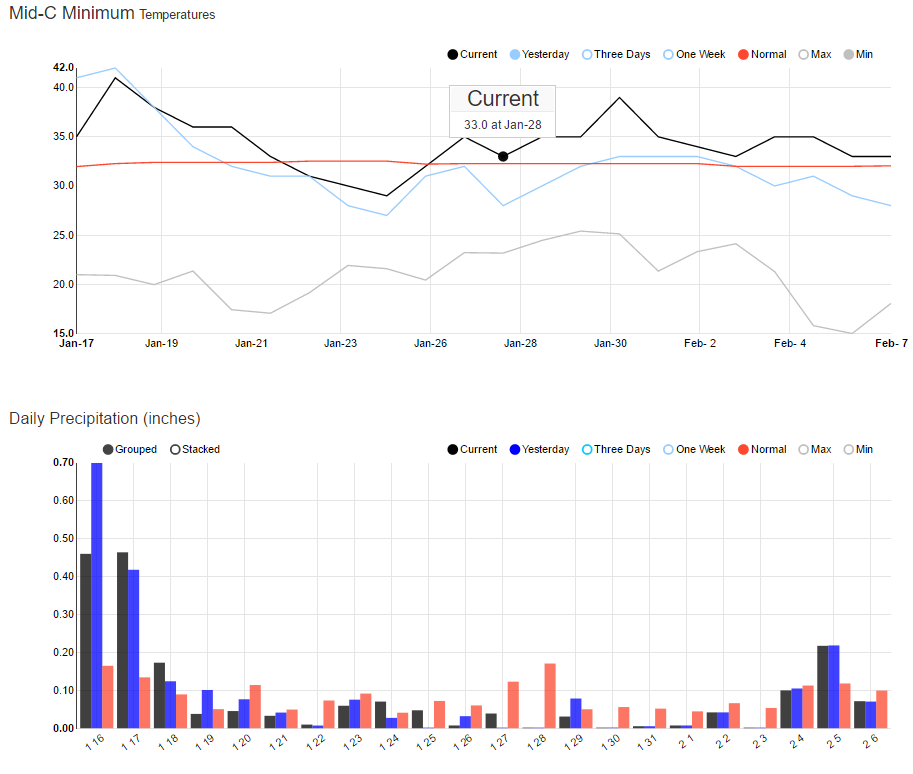 Warmer than normal minimum temperatures and wet weather have arrived in Mid-C.  Min temps should be nine degrees above normal tomorrow while heavy rain will fall in much of the hub.  Over 0.40″ should fall over the next two days.  The only question is whether it will fall as snow in the mountains. 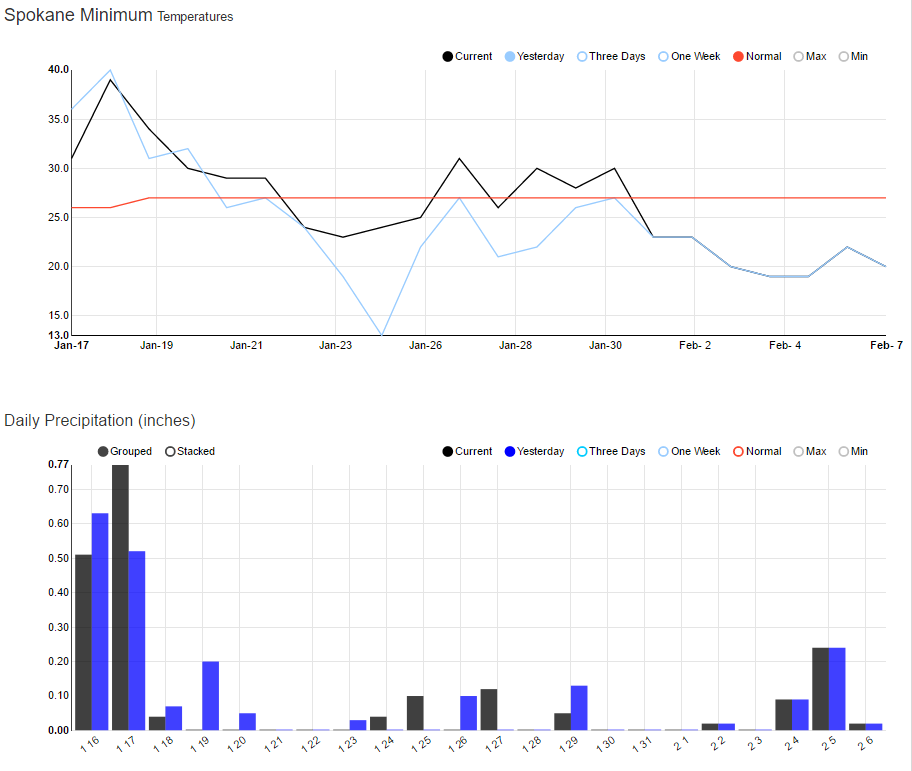 Eastern Washington will also be warming up, and with heavy precipitation mixed with more than 12″ of snow on the ground, we should see significant runoff over the next few days.  Spokane will be 13 degrees above normal tomorrow, and may not dip below freezing again for three days.

In a reversal of trends that we’ve seen over the past month, Mid-C and Rockies are now showing temps above normal while NP15 and SP15 are slightly cooler.  Palo Verde is a bit more extreme with temps four degrees below climo.

The 2017 Mid-C snow year is now significantly ahead of each of the past six snow years.  As of Jan 12 2017 sits at 139% while the next closest year (2013) was 118% on the same date.  As noted above, Mid-C should see very wet weather over the next three days, and while it should fall as rain in the lower elevations, it’s still undetermined how it will affect the snow supply.

Close to half (7/15) basins are pacing above 100% of the 10-year normal water supply which is up from last week, though Clearwater and Flathead lost ground.

The 10-Day River Forecast projected an increase in MW for the 16th, and smaller changes for the rest of the week.  Both forecasts are well below what was projected last week.

Mid-C demand remains elevated, particularly when compared to last year.  Demand is up 5400 MW over the same day last year, and up nearly 1500 MW over last week.  Loads should see some relief as warmer temperatures move in for the next week or so.

NP-15 Loads increased yesterday to it’s highest level of 2017 (16,711 MW).  This mark a weekly increase of close to 500 MW, and an annual increase of nearly 1300 MW.  The year-over-year difference in off-peak demand has grown more than on-peak, most notably yesterday when the gap reached 1500 MW.

Gas ISO outages recovered 650 MW over the past week, but still remain up more than 1000 MW since the beginning of the new year.  Hydro increased its outages by roughly 50 MW.

All plants have back to running at 100%.  This marks just the second period of full generation since Mid-December.

Just as a reminder, the next scheduled refuel is set to take place on Feb-10th for Columbia Generation Station.  The refuel is expected to last 58 days.

Solar generation in SP15 slowly increased over the last several days, moving from just over 4000 MW on the 10th to a potential high of 5800 MW tomorrow.  While generation is expected to slow back down for the rest of the week, there is a chance we could see solar reach 6436 MW next Monday.