Extreme precipitation looms in California and a cooler Mid-C persists.  Here are a few highlights of what’s going on in the West. 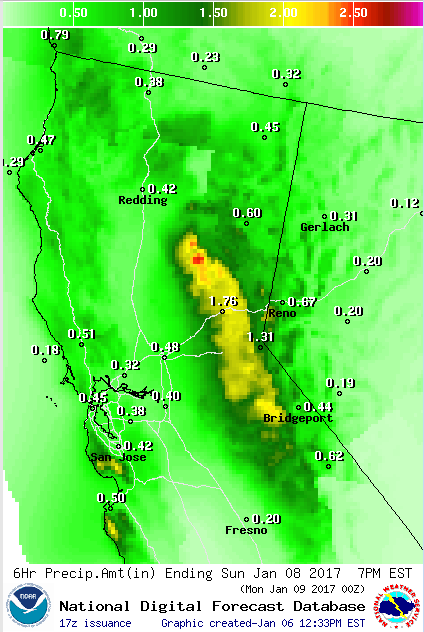 Heavy precipitation is about to hit California as nearly 10″ is forecasted to fall over the next five days.  The atmospheric river is expected to bring 4-5″ of rain to Fresno, 8″ to San Francisco, and more importantly, at least 10 feet of snow to the Sierra Nevadas…but only the tallest mountains as the freezing level may be as high as 10,000 feet.

Needless to say, it will be important to keep an eye on whether the freezing-level is able to drop a couple thousand feet, but as of now the atmospheric river is warm.  These snow stations currently sit at 120%+, but will drastically move either up or down after the storm.

Today marks the last day of definite ten-year low temperatures in Mid-C, but what might be most notable is the change in next week’s forecast over the last few days.  What was originally expected to be above normal temps heading into Monday, has slowly changed into cooler weather, and it keeps getting cooler with each refresh.

Couple the relatively cooler temps with the above chart and we can now expect some major snow fall in the mountains.  Mid-C should have decent precipitation for most of next week.

If next week’s forecast holds true, Mid-C should easily jump back above 100% of normal.

After hitting a bottom on  Dec 24th, Grand Coulee has slowly built up storage back to 88% capacity despite the record cold temperatures.

Taking a look at the reservoirs up river explains why Grand Coulee was able to add to storage.  While Grand Coulee added 4 percentage points to its reservoir from the 24th to today, the BC aggregate dropped from 62% to 54% during the same span of time.

Not much change day to day for the 10 Day River Forecast, but it remains largely above the STP forecast for the next seven days, and roughly 1000 MW higher today.

Gas outages are up 750 MW in the last two days, and nearly 1500 since the 30th of December.  About 180 MW of hydro has returned since the 4th, and just negligible changes from the other sources during the same span of time.

Wind picked up several days of high generation over the past week, including three peaks of over 3000 MW.  Wind is forecasted to build up over the next four days and potentially peak at over 4000 MW on the 11th. 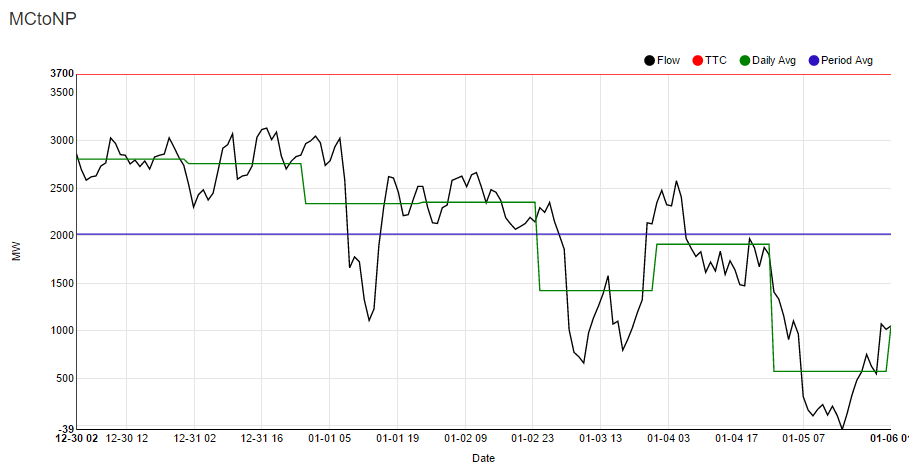 TTC has held steady over the past week, though flow has been steadily dropping.  The daily average reached a bottom of 573 MW yesterday, and even saw flow move north with MC-NP hitting -39 MW at 3:00 PM yesterday. 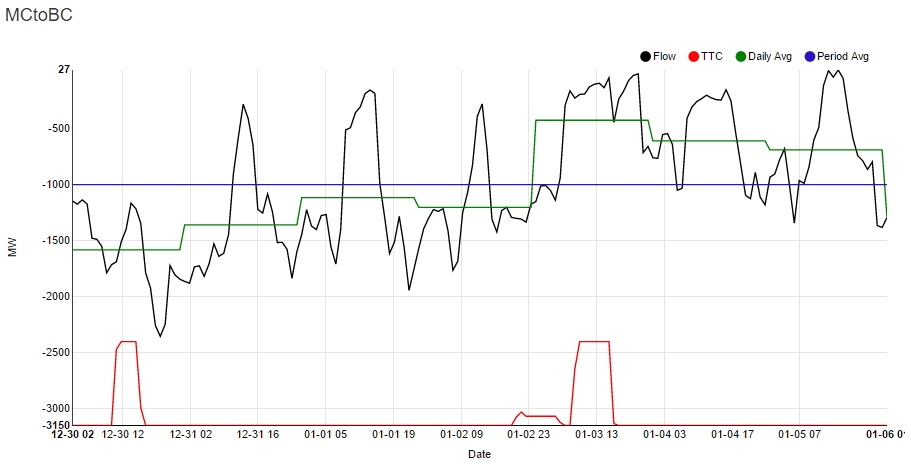 Flows reached an hourly high of 21 MW yesterday afternoon before settling at -687 MW for the daily average.  Transmission continues to move into MC as cooler weather persists.