As Grand Coulee draws down a little faster than most years (for December), snow is beginning to pile up.  Mid-C is sitting at 94% of normal, significantly ahead of the past two years.  94% is also a decent increase over the past several days as snow storms have blanketed the northwest.

Rockies and Great Basin are both pacing above 100% while PV has yet to show much snow at all as it sits at 14% for the 2017 snow year.

Mid-C loads have tapered off a bit from last week, though remain above last year’s demand with a difference of 2200 MW yesterday.  Demand is also up week-over-week by nearly 1250 MW.

Sacramento won’t be as warm as Burbank, but it has also seeing a re-forecast bringing higher than normal minimum temps beginning on the 22nd.  The 23rd is now forecasted 9 degrees warmer than what was predicted yesterday.

The 10-Day River Forecast continues to forecast well above the STP forecast, especially for the next five days.  The 10-day forecast is more than 1000 MW higher than the STP for Dec-20th.

Outages of all types, and particularly gas, have further decreased since the 16th.  Total outages for the ISO sit at 2671 MW, down from a high of 7188 MW on the 9th of December.

Solar generation in SP15 had very high production the past several days, each of which registered above 5200 MW.  Solar is expected to dip to 4500 MW for the next two days before again reaching above 5000 MW to close out the month.

Mid-C wind has the potential to hit a several week high today with a projected generation of over 4000 MW.  Generation reached a week high yesterday at 2782 MW. 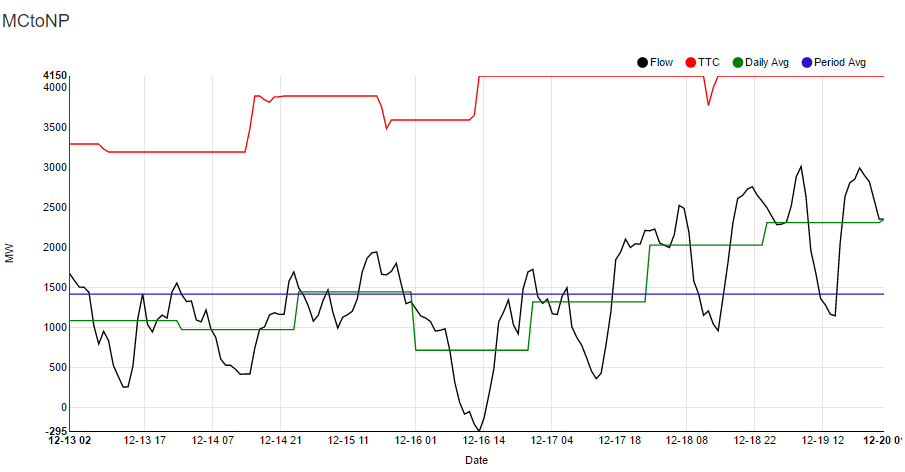 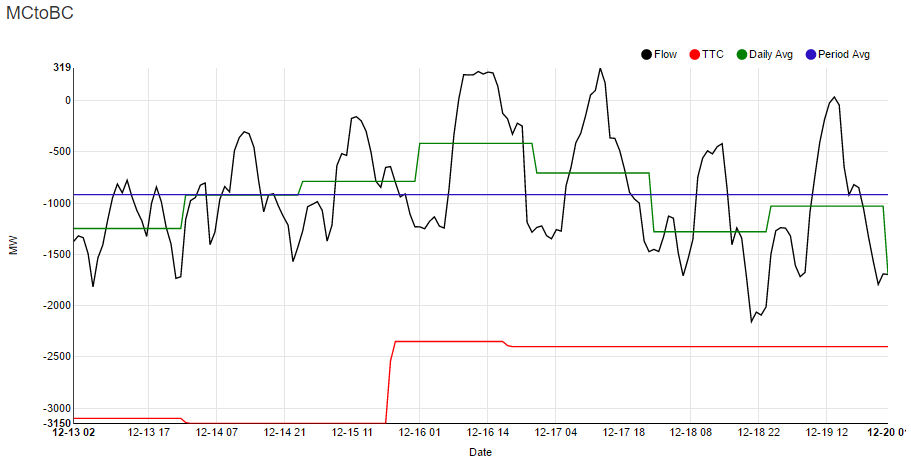 BC imported from Mid-C twice during last week’s Artic Express.  The flow north reached a peak of 319 MW at 2:00 PM on the 17th, and was then followed by flow quickly moving south with a low of 2156 MW on the 18th.