We had a wet weekend in Seattle and that trend appears to be continuing on through the rest of the week with at least another inch expected by week’s end: 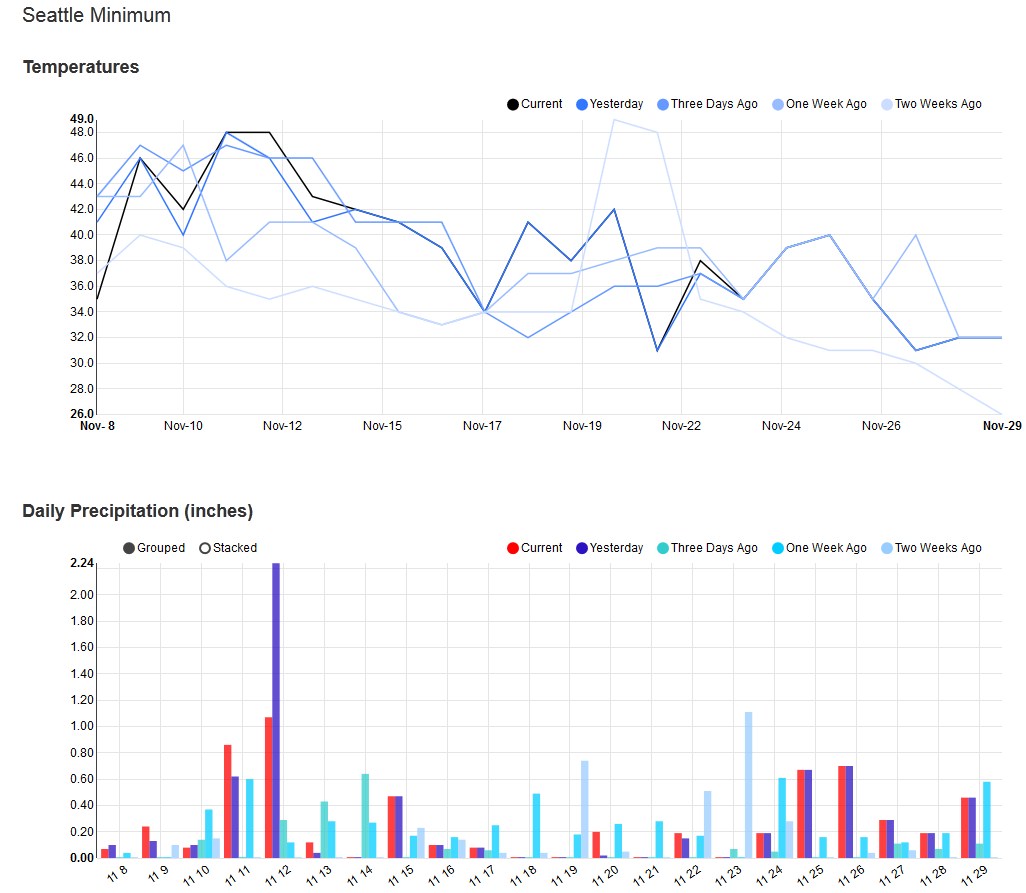 Check out yesterday’s (Sunday) forecast for the 12th – 2.24″; apparently the A Team was home watching football and the weather scrubs were turned loose and ran amuck.  The pros backed that forecast down to 1″ but spread it across two days.    This storm track is clearly on a northern bent as California is getting very little, even Portland is missing much of the rain: 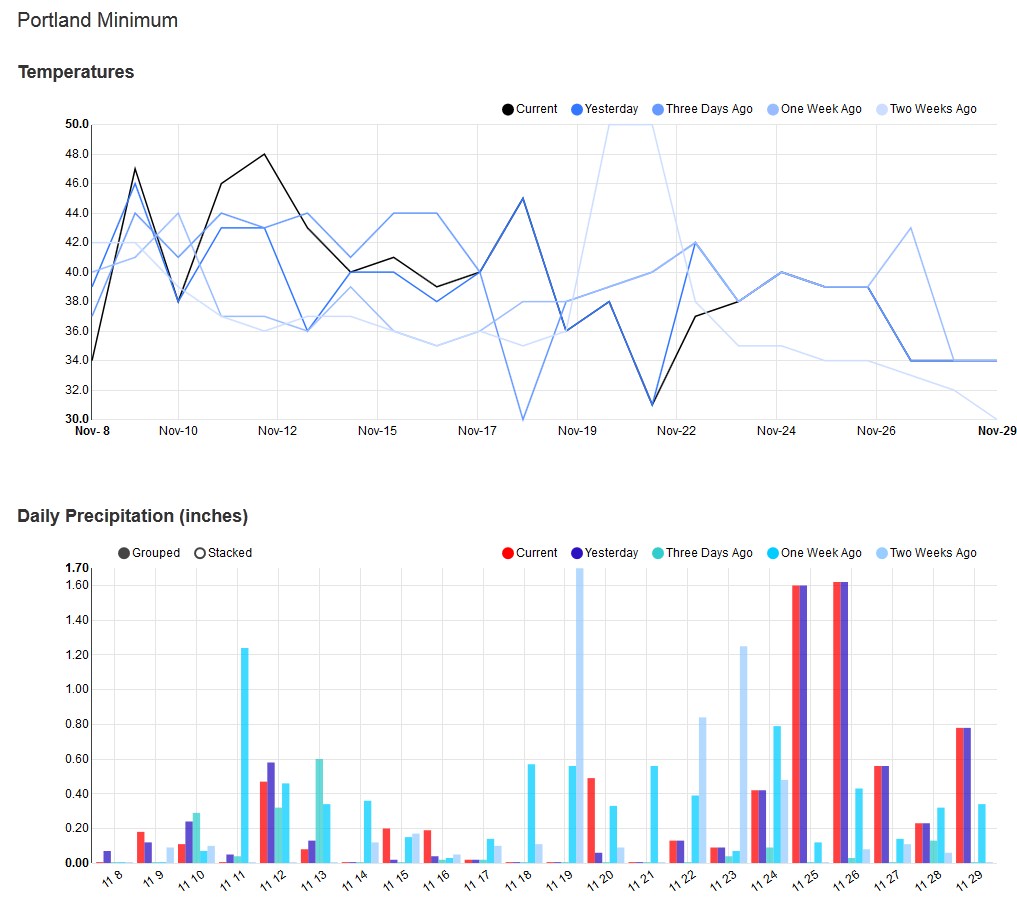 Clearly less precip in week one but check out those crack-cocaine forecasts for Thanksgiving week … nearly 4″.    Highly unlikely, too far out in the forecast, not even sure why any one would dare to place such an anomaly in a forecast (oh that’s right, Ansergy does it nearly every day).

Most of the northern basins are starting to accumulate snow, though they remain below normal.  The Clark Fork is at 50%, Salmon at 87%, Kootenai is at 67%, and the Flathead is at 76%.  It is far too early to call the water year but the trend is setting up for dry.   A study done a few years back showed the correlation between the current anomaly and final anomaly not becoming statistically relevant until mid-December.

The northwest reservoirs begin the water year nearly 4% behind the last three years:

All of this shortfall is explained by Libby and Hungry Horse (each off about 10%) while Coulee,  Dworshak and Lake Pend Oreille are near normal.  None of those facts can lead to any compelling water year trading/hedging strategy yet, they are just worthy of our attention as the year plays out.

Today will deliver the latest installment of the NWRFC’s STP forecast.  Probably the best tool to forecast the forecast is Ansergy’s 10 day versus STP report, at least it is in my opinion:

The trend from last week was to cut water in the 10 day forecast (for the same days as the STP) which would lead me to induce a modest cut in today’s 120 day forecast.   This induction is confirmed by relatively dry east-side forecasts, though if the RFC places any credence in Portland’s 21 day precip forecast they may go the other way.  This morning’s update will be important to monitor as it probably will tip their hand as to the STP’s direction.

Renewables have tapered off considerably adding a modest bullish element to the picture:

Most of the cuts in wind are coming from the Mid-C.    While we are on the generation front it’s worthy of noting that the Diablo Canyon refuel is over and that unit has begun ramping up.

Ironically, as Diablo 1 was returning CGS burped, but appears to be a short-lived phenom and now is almost back to 100%.  We are forecasting PV 2 to exit its refuel by week’s end thus returning nearly 2000 MW of baseload to the bearish WECC outlook.

Loads?  Slightly bearish in the south and neutral to slightly bullish in the north.  The weather forecasts show a hint of cold weather east of the Cascades at Boise and Spokane, but it is short-lived and not that cold (1-2 days, 15 degrees):

I’d put as much faith in those low temperatures as I did with Portland getting 4″ of rain on Thanksgiving, but it’s worthy of watching.  The Mid-C continues to fill the AC into NP15, and Powerex continues to remain, mostly, on the sidelines:

Clearly the folks up north are opportunistically buying and selling as they see fit which suggests a further dampering of MId-C price volatility.  If things get bullish they have bullets to sell; if prices get soft they will buy.  Meanwhile the northwest will keep the lights on in California and fill the AC, at least until Diablo comes back, then let’s revisit that premise.

The Ansergy price forecast for Mid-C remains range driven as the water year swings from dry to wet, but that should change as we get a bit further into the developing water year: 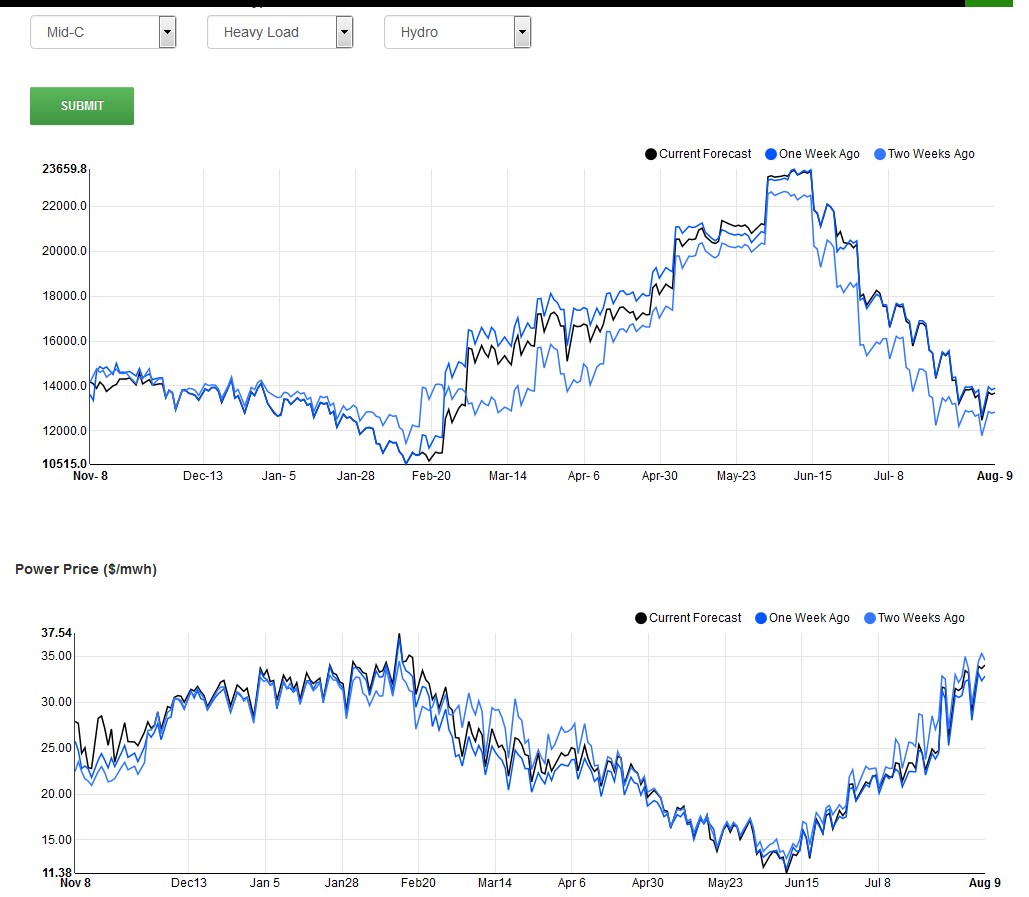 So given all of the above what are my sentiments you may be asking?  Don’t really have any strong opinions, now is the time to watch and wait.  I’d not be making major bets on wet/dry, just looking for market mistakes.  Tomorrow I’ll identify a few of those mistakes, at least what I consider mistakes.

Watch for our STP update later today, there might be some fireworks in that water report, but probably not.

In passing  I would like to mention with deep sadness the passing of Ryan Hoppe, a close friend and colleague of mine.  Ryan was my first hire at PowerLytix and most recently was in charge of Analytics at Tacoma Power.  He will be dearly missed by many.