Just a quick update on a few things, more NW hydro focused than anything else. The last storms have now set a few of the principal basins in positive territory for precip, including the Clark Fork, Clearwater; and several others are now at normal (Kootenai, Flathead, and Pend Oreille).   Maybe more interesting is the recent rains on the east side of the Cascades have pushed the Methow and Wenatchee to 160% of normal.  These latter two can are relevant as they enter the Columbia below Coulee and are effectively unregulated.

Though these side flows are not contributing much to total flows today, they can account for 100kcfs in flood stage, something that can, and has, happened in early Winter.  I am seeing another storm blowing through the northwest as evidenced in the Seattle 21 day forecast: 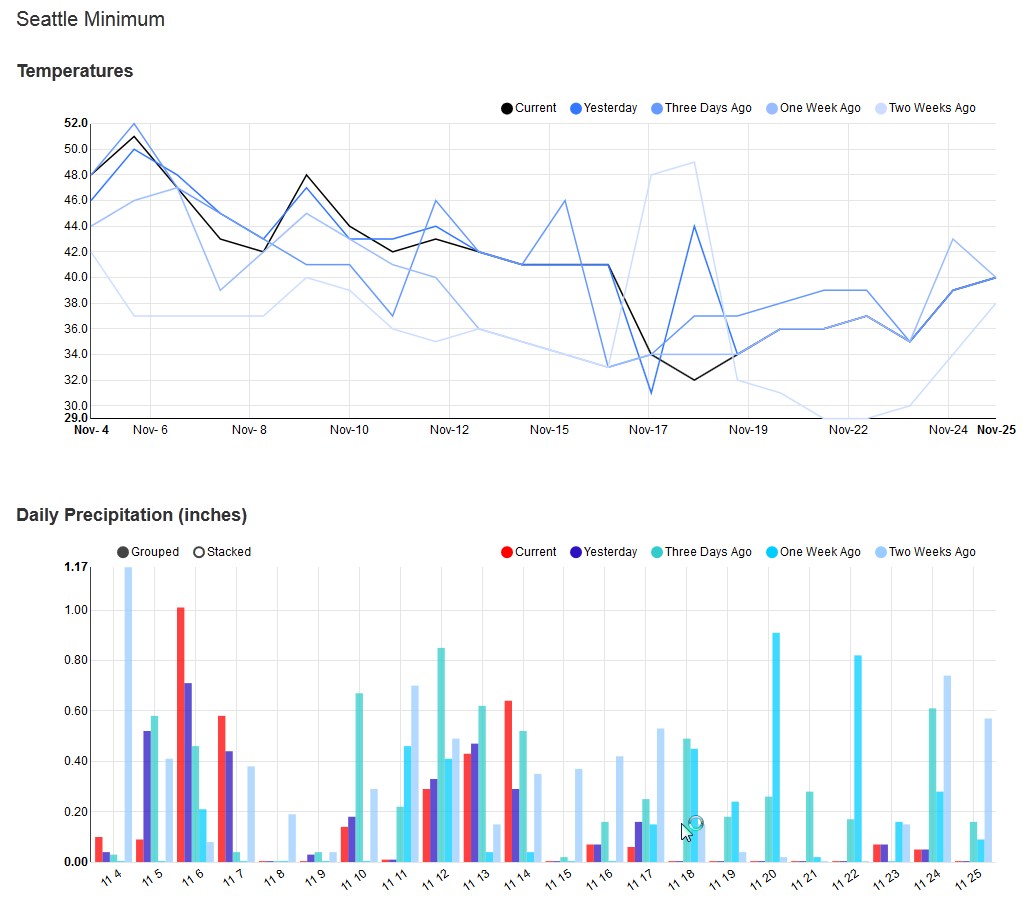 Today’s forecast is putting nearly an inch of rain on Seattle, some of that will make it over the hill, and what looks like another storm next week.  None of this is coming as snow, it’s too warm, at least not in the lower elevation northwest sites.  Lake Tahoe looks like it is going to get some early snow: 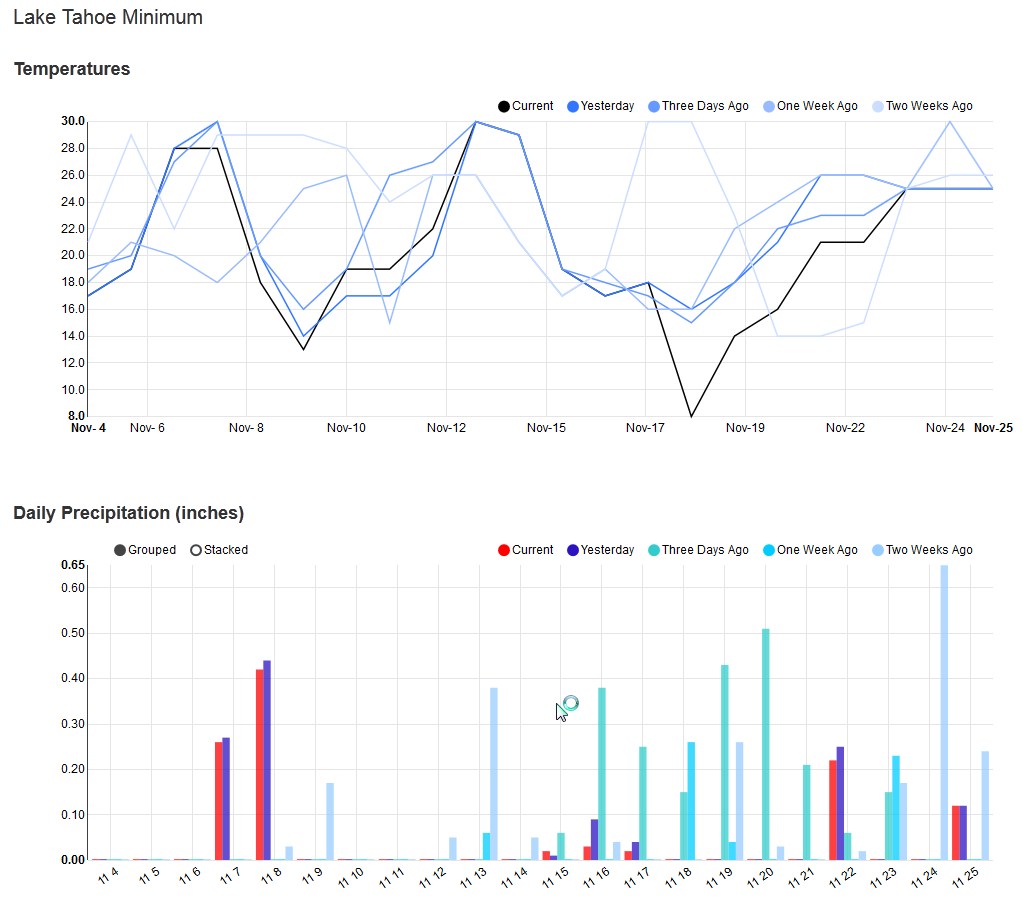 Check out that off the wall forecast of 8 degrees on the 18th of November – a bold and ridiculously low prediction so far out, but that aside, there is .5 to 1″ of precip coming with temps certainly in the 20s.  Skiing by Thanksgiving?

Right, they do, right they are bearish, so is the nuke outlook.  Diablo and Palo each have a unit returning this month.  So what is bullish?  Nothing, its bearish everything and everywhere.   The River Forecast Center has given back what it tooketh last Monday:

And she is consistently being consistent all week long suggesting an unchanged STP on Monday, though I’d be inclined to predict that they may put some more water into BOM and Dec.  I know that is contrary to what I’ve been saying, but there are new storms a coming, storms that have passed through, and water supply outlooks that have been revised upwards, albeit modestly.

I’d suggest those forecasts (water supply) continue to be revised upwards through next week casting a bearish pall on Q2 and  Q3.  Speaking of which, let’s look at these (Mid_C OnPeak), beginning with Q2:

Our forecast has taken a drop in the last few weeks while the market remains mired and unchanged in the low 20s.  Yeah, I know it’s El Nino and, by the way, the latest weekly index is now 2.7 vs 2.6 same week in 1997, but we just aren’t seeing the classic El Nino dry.  I’d be inclined to off load any Q2 length today thinking I could pick it back up cheaper in few weeks.  The Q3 is more interesting:

The market has tumbled, the forecast has slipped a bit, but the delta is non-existent suggesting a possible long entry point.  So yes, I am saying how about long the Q3:Q2?   Yes, that is what I’m trying to say, “How about that Q3-Q2 Mid-C roll?”:

I am almost giddy over this trade, from the long side.  The market has pounded it down while the forecast has dropped much less.  From an inflection perspective there is way more upside in the 3 than the 2; probably some of the current price is driven off of last year’s end of June lotto ticket, one that has a very low probability of recurring.  Put me down as bullish on this roll.