Lots of things happening across the WECC’ some bullish, some bearish. Too many to dally on an intro,  so instead, “let’s get at it.” 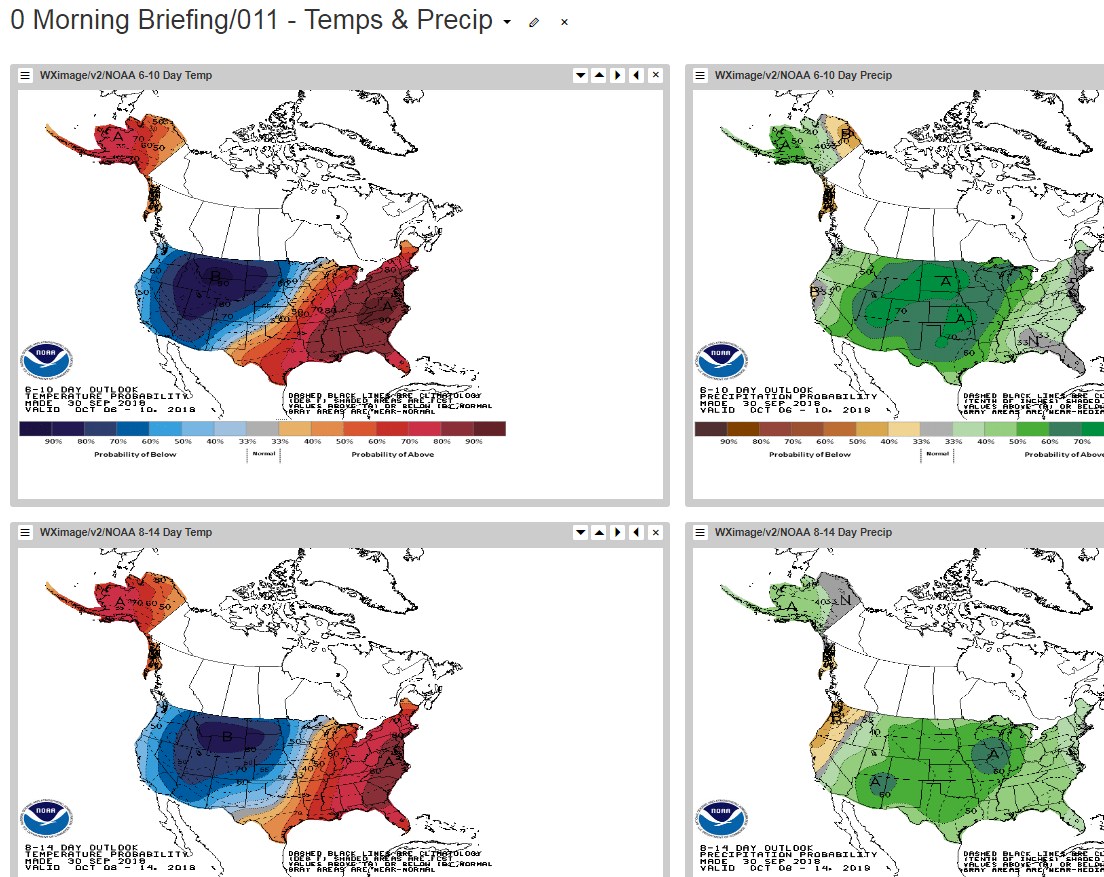 If only the date of this commentary was Dec 1, 2018, and not Oct 1, 2018. If such were the case, the above temperature plots would send shivers of delight down the long’s backside and shudders of dread into the short’s shorts. But it’s Oct 1 and that dark blue means the end of Cooling Degree Days for most hubs, and it’s too early to render many HDDs, so this is just bearish. The precip is bearish also, mostly above average.

And, the remnants of a hurricane is heading for Palo Verde. 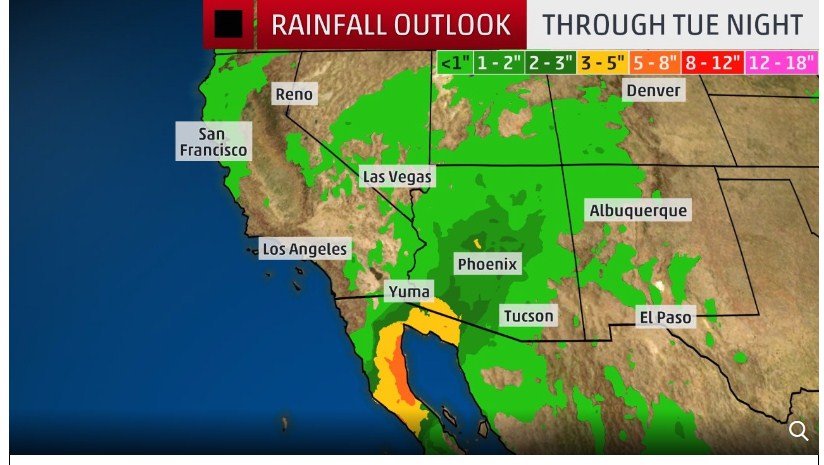 The bullish news is the solar will go dark, but the demand decay will more than offset that sliver of silver in these dark clouds. 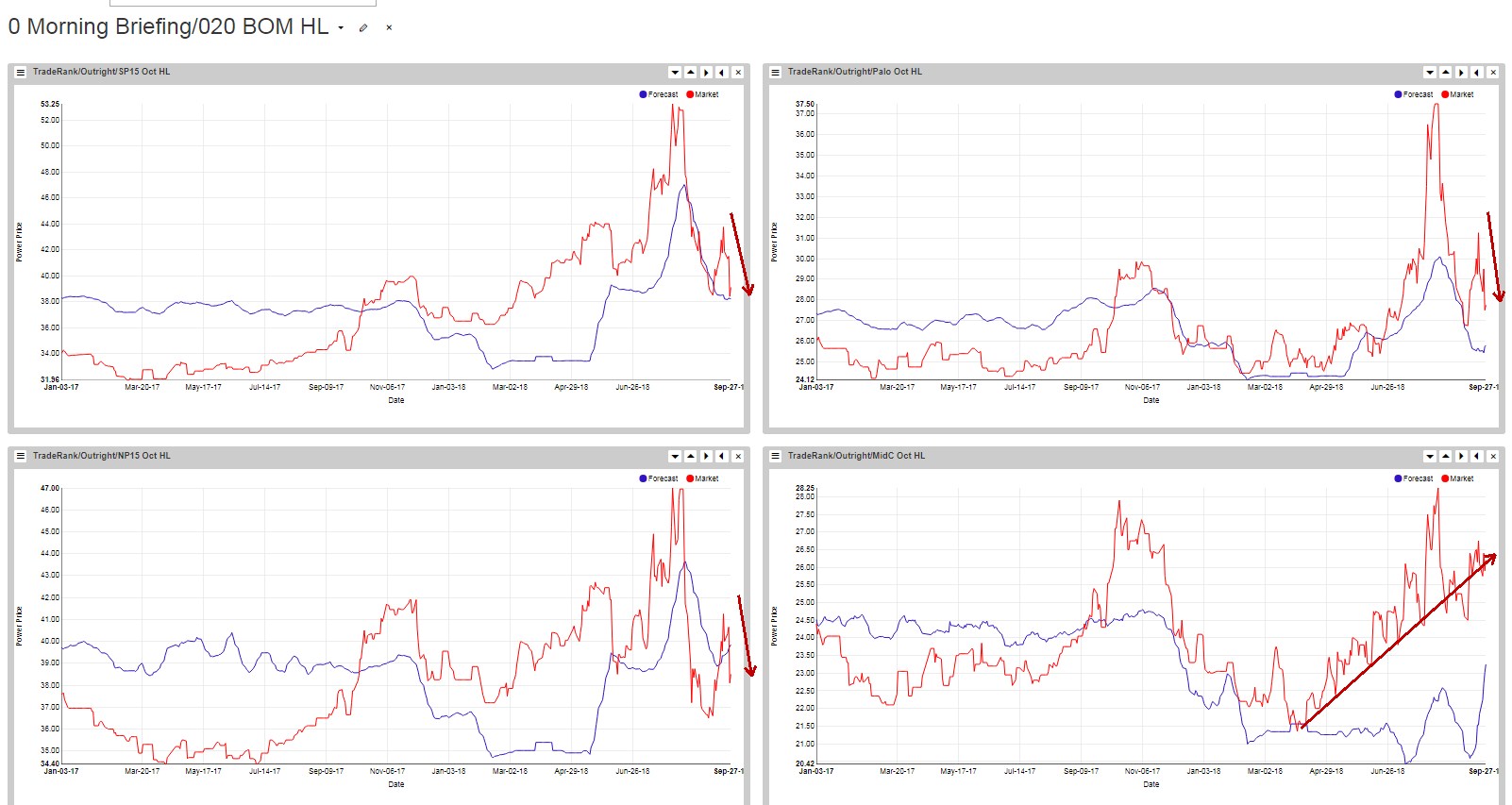 It’s a new month, October, and a new BOM that is sending mixed signals. The South is tanking while the Northwest is rallying. We’d be inclined to fade that move off of a rallying hydro outlook in the Northwest. 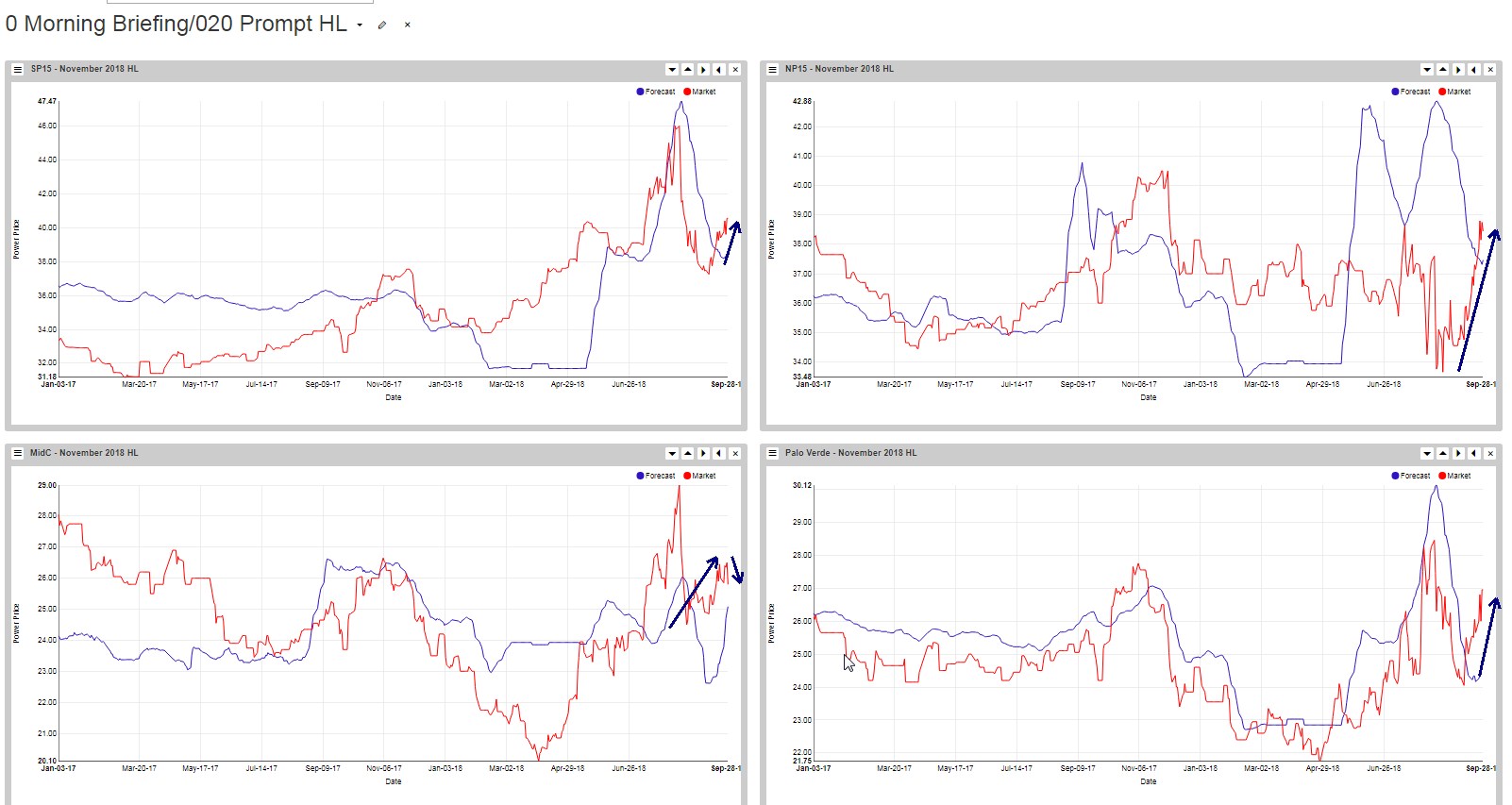 The new Prompt, Novy, is up across all four hubs and we’d be more inclined to sell the roll than buy it (Buy BOM, Sell Prompt). 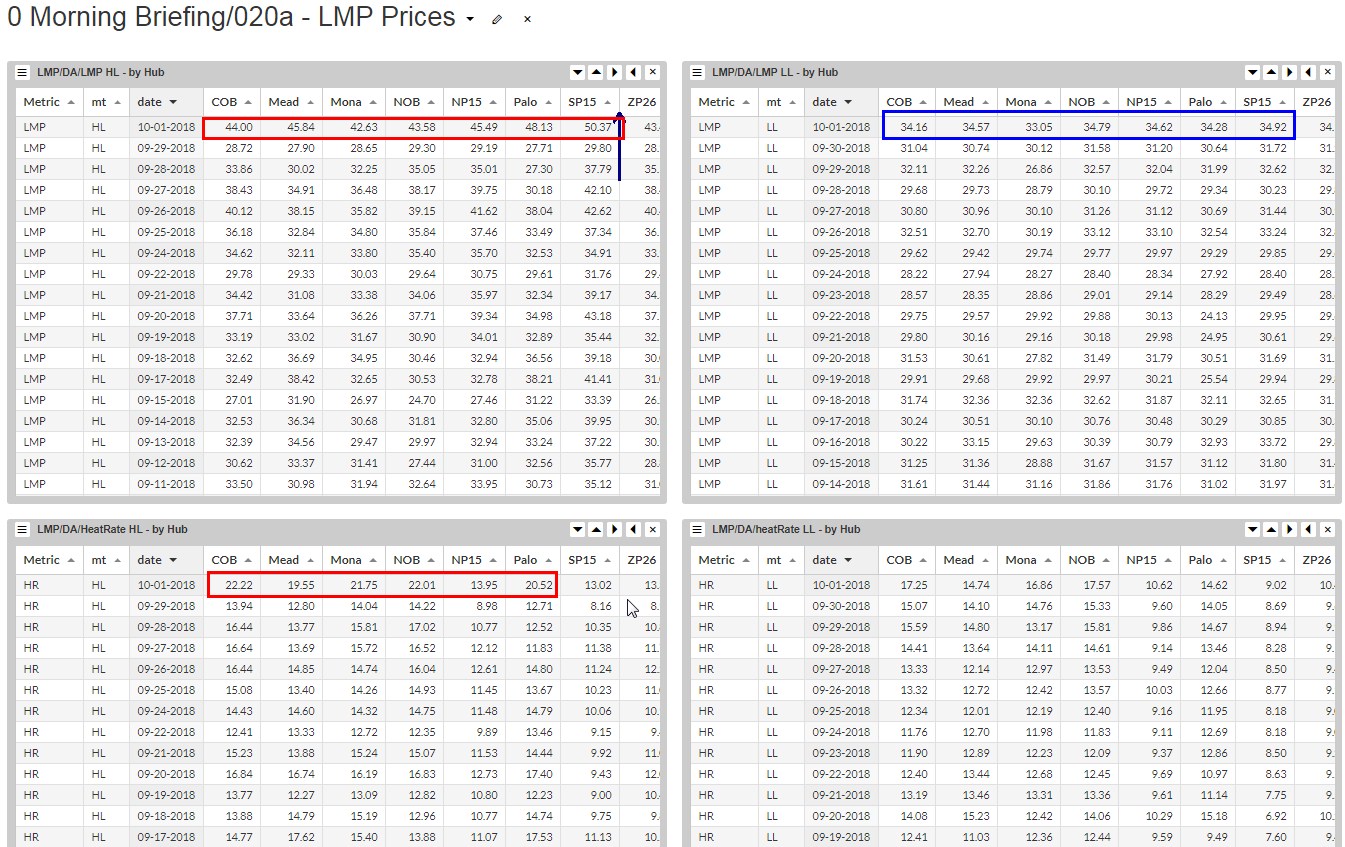 Here’s a harbinger, LMP DA set a two-week high on the Sunday for Monday market. And take note of those heat rates, these are still those other-worldly summer 20ks. Another change, the On|Off spread has blown out; it’s been tight all of Sept.

The SP-Palo tightened up in yesterday’s Day Ahead, there was a fair amount of congestion the prior three days. We’d think that spread will blow back out with Rosa pounding Palo. The SP-NOB also blew out while the NP-COB remains tight reflecting the dearth of water in the Northwest. 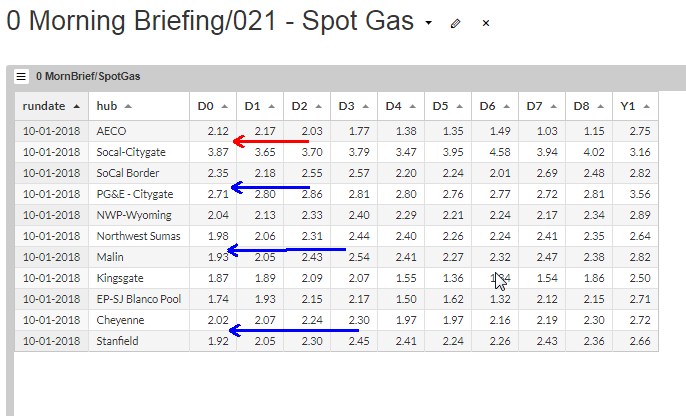 And Socal Citygate found a bottom and rallied off of new problems with Socal Gas infrastructure. That poor utility, they can’t fix anything. Instead of repairing they just break more things.

Seems they dumped another 425 MMCF import capacity over the weekend. This is a new outage, there were no hints this was coming.

Fitting, since today is the One Year Anniversary of the TWP Needles explosion; now it seems that measly 275 MMCF capacity has been cut in half. How long does it take to fix a pipe? In a year, they should have been able to build a new pipe from AZ to LA and all they had to do was patch a small segment. 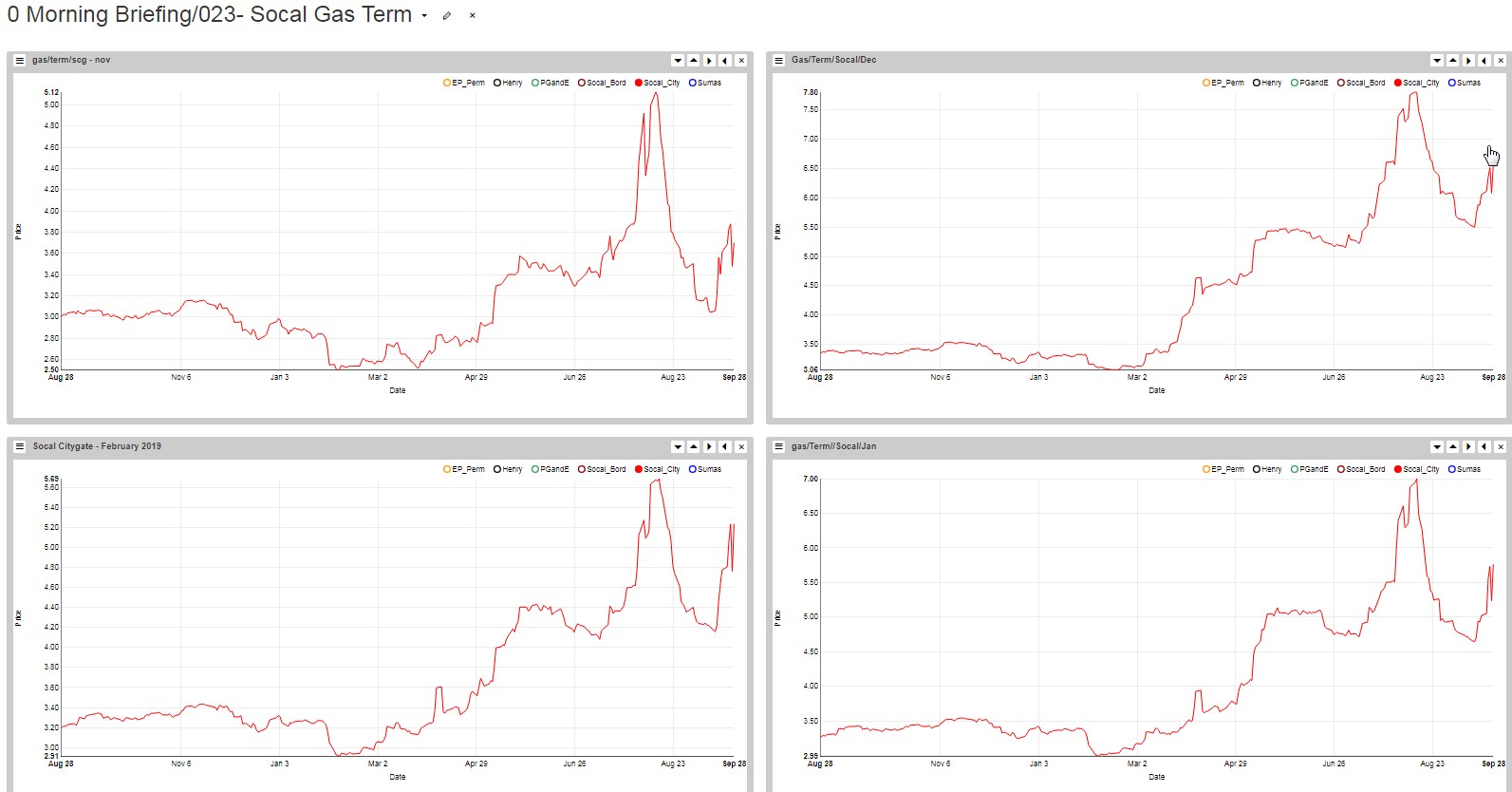 Meanwhile, the Citygate term market found its bottom and is back into bullish territory; this new outage won’t help things. Just be glad it isn’t Dec 1 as that NOAA 6-10 day would set this market afire. 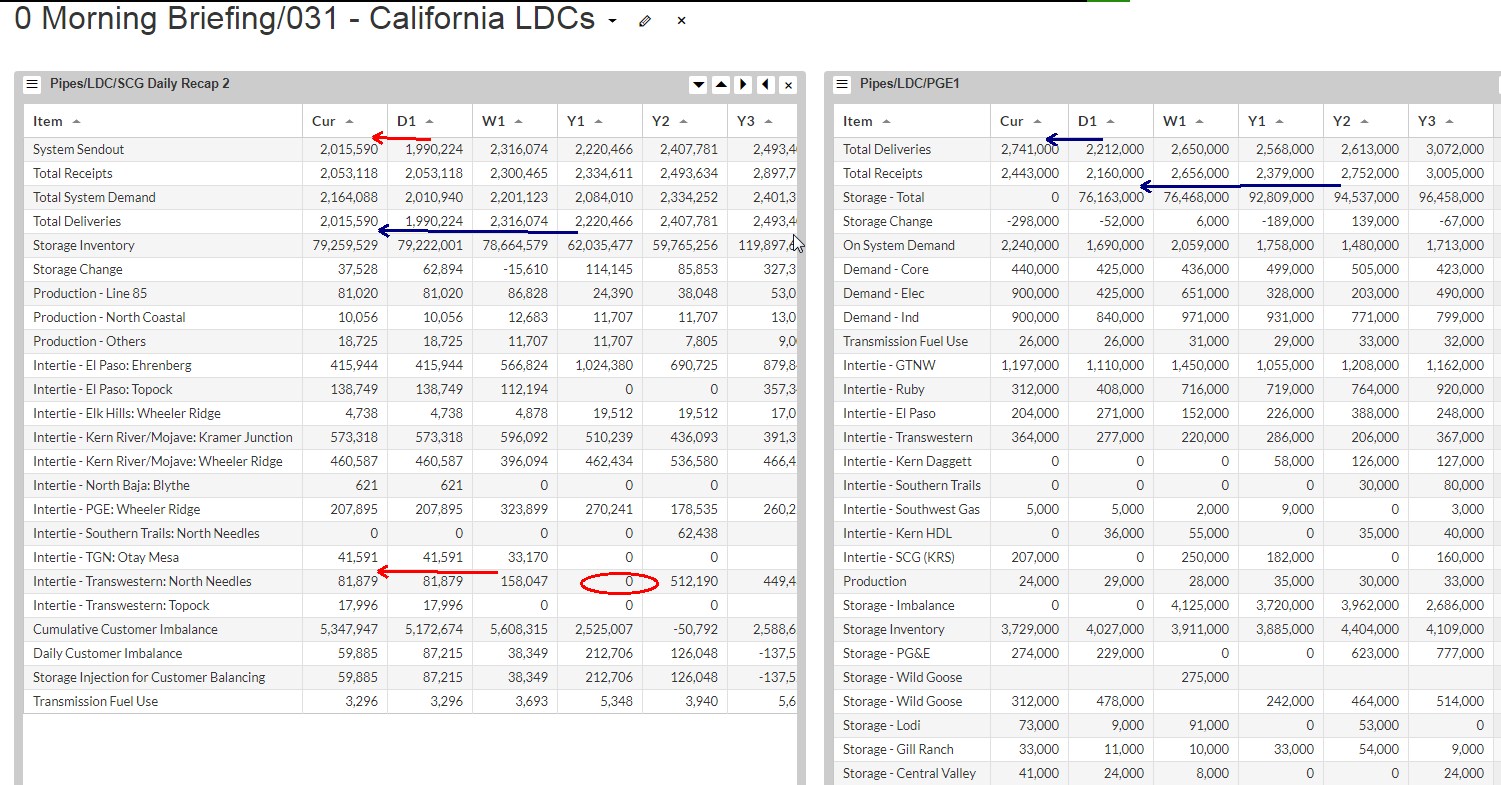 Demand rallied at PG&E, but is off at Socal Gas. Storage is strong at Socal and not at PG&E. 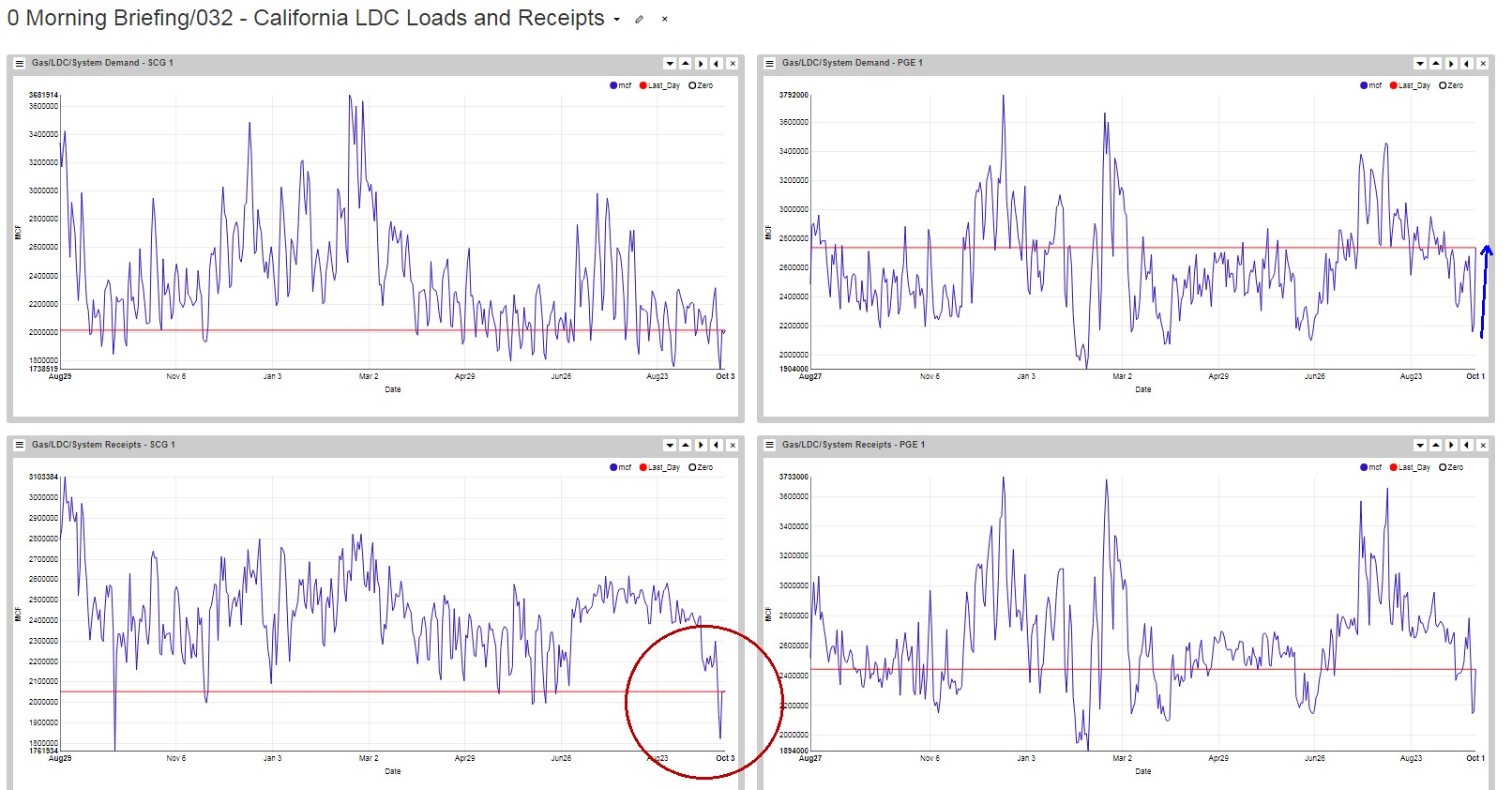 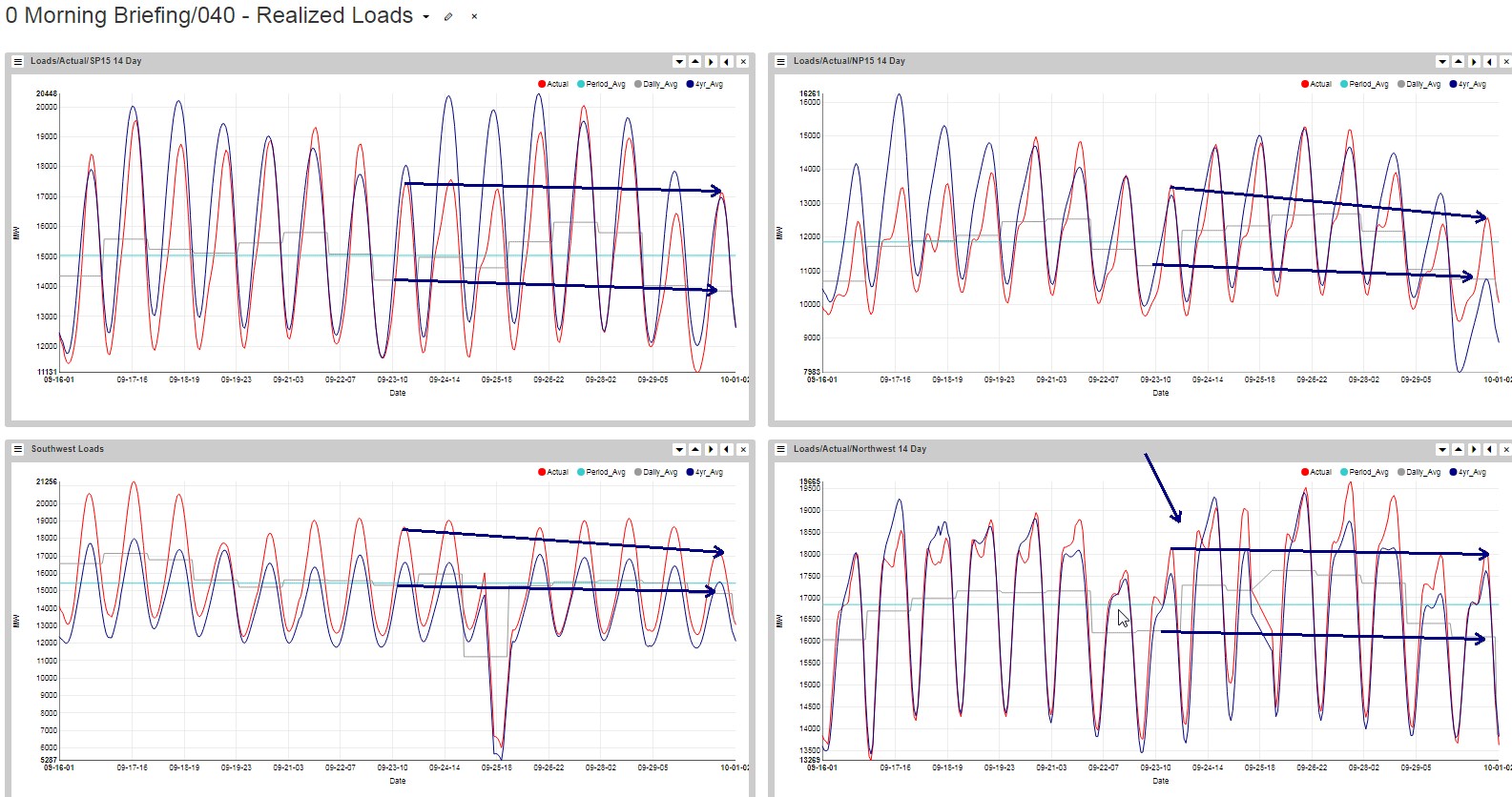 Loads are off everywhere, falling off of cooling temperatures. 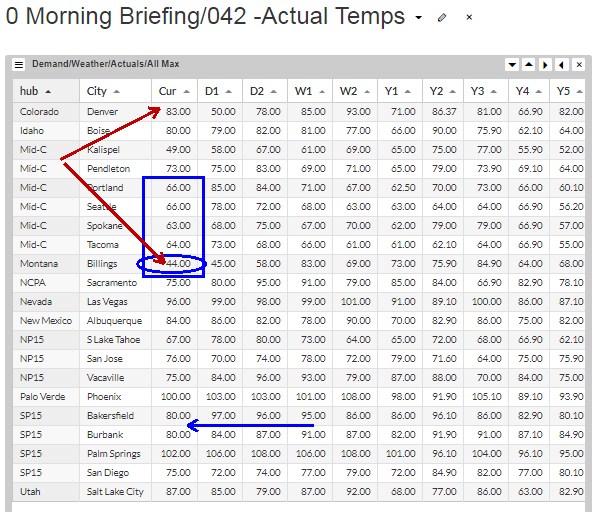 The MidC I-5 corridor chilled in the mid-60s; Burbank dropped 11 degrees to 80. Billings (where’d this come from?) reached a Sep 30 high of 44 degrees, contrast that with Denver’s 83. And those two cities are just 300 miles apart. 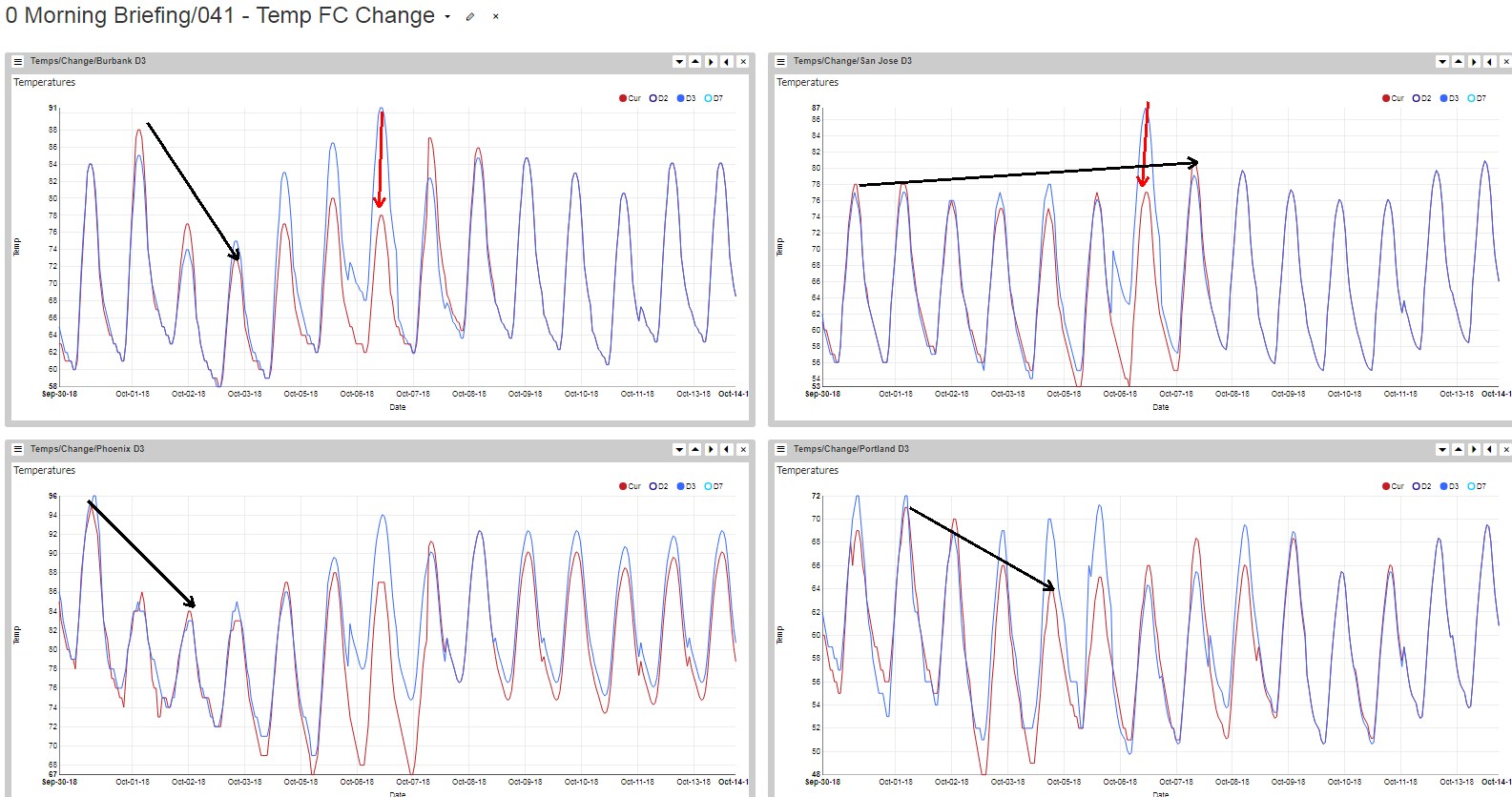 Not only are temperatures falling, the forecasts, day-on-day, are falling too. This report compares the most recent hourly against three days (Friday’s). 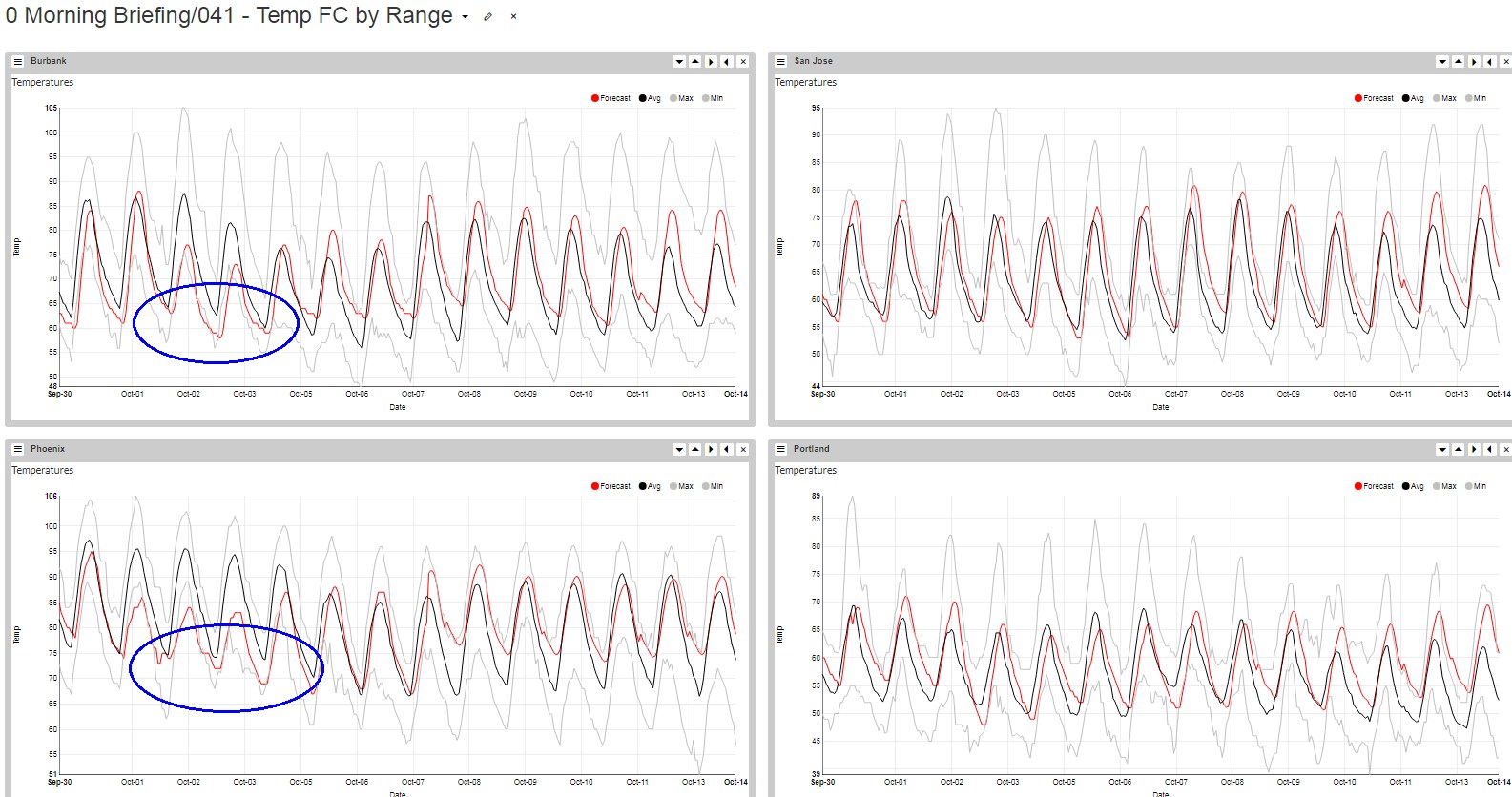 And all of this cooling is going to set some new ten-year lows. The above is the “Range” report which shows the ten-year highs and lows around the current forecast and the ten-year average. Nothing bullish in either set of plots. 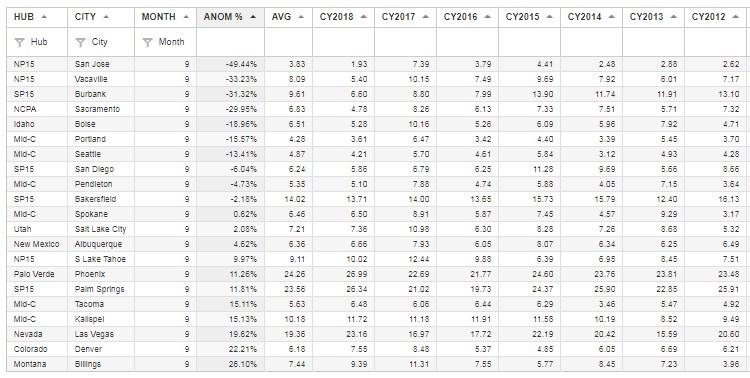 It’s a good time to step back and take in the big picture, with the expiration of September. The above highlights the Degree Day anomalies by city and hub and demonstrates what a bust last month truly was. 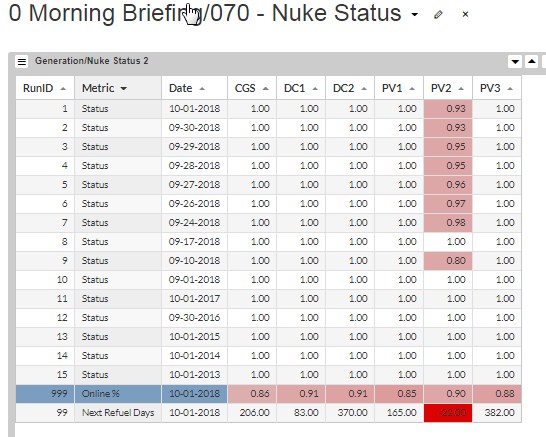 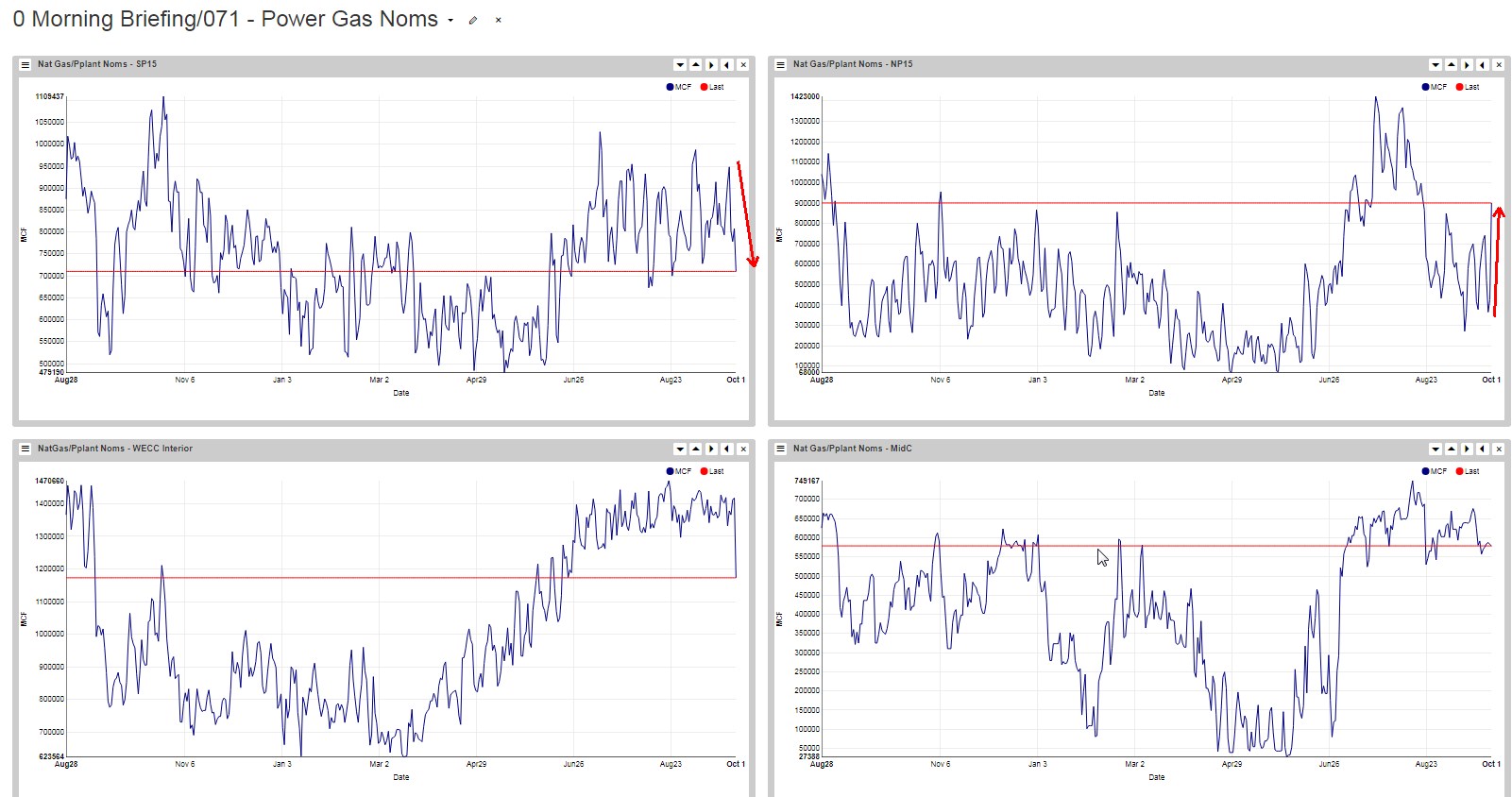 Gas nominations at SP have cratered while rallying at NP.  Here is a detailed look… 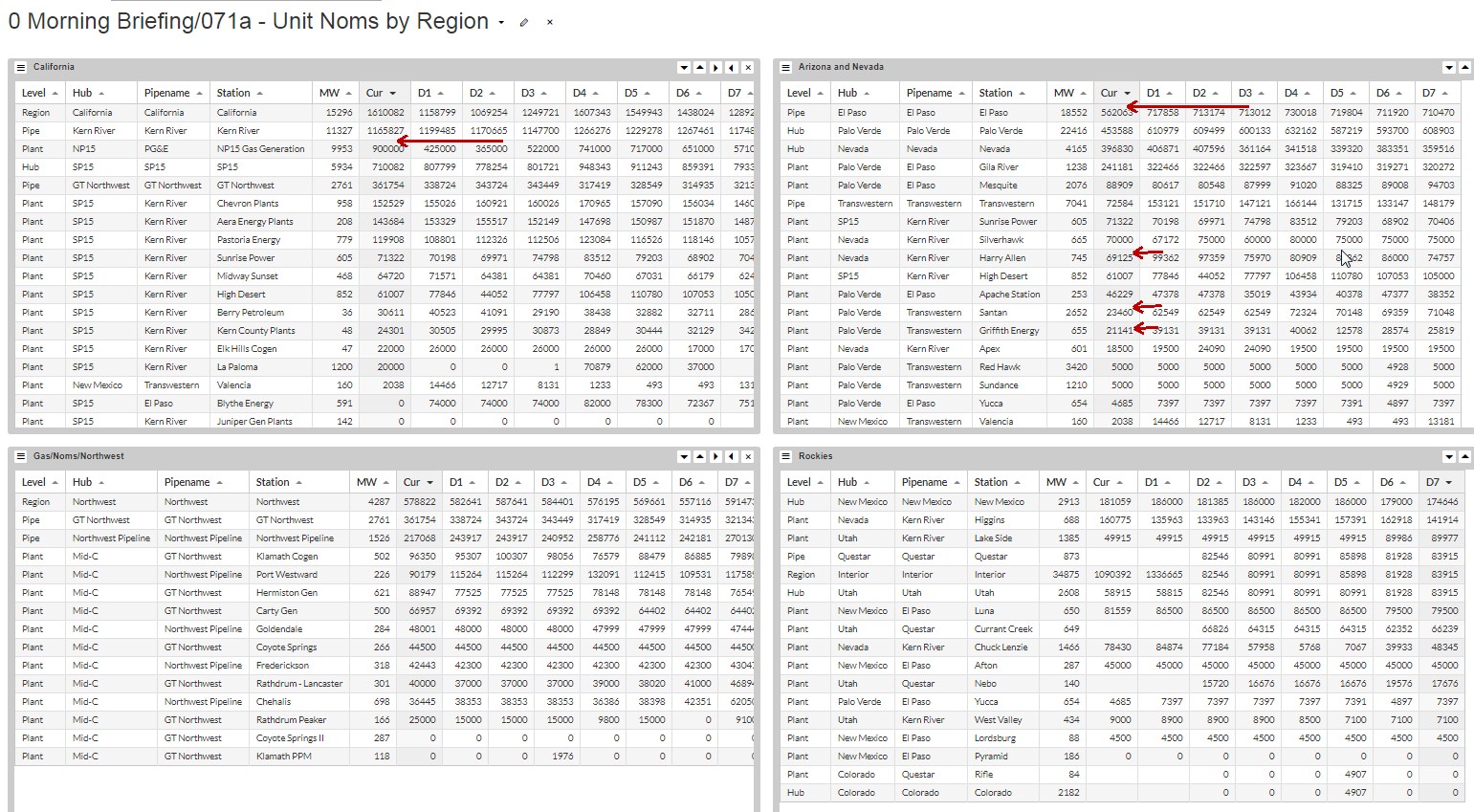 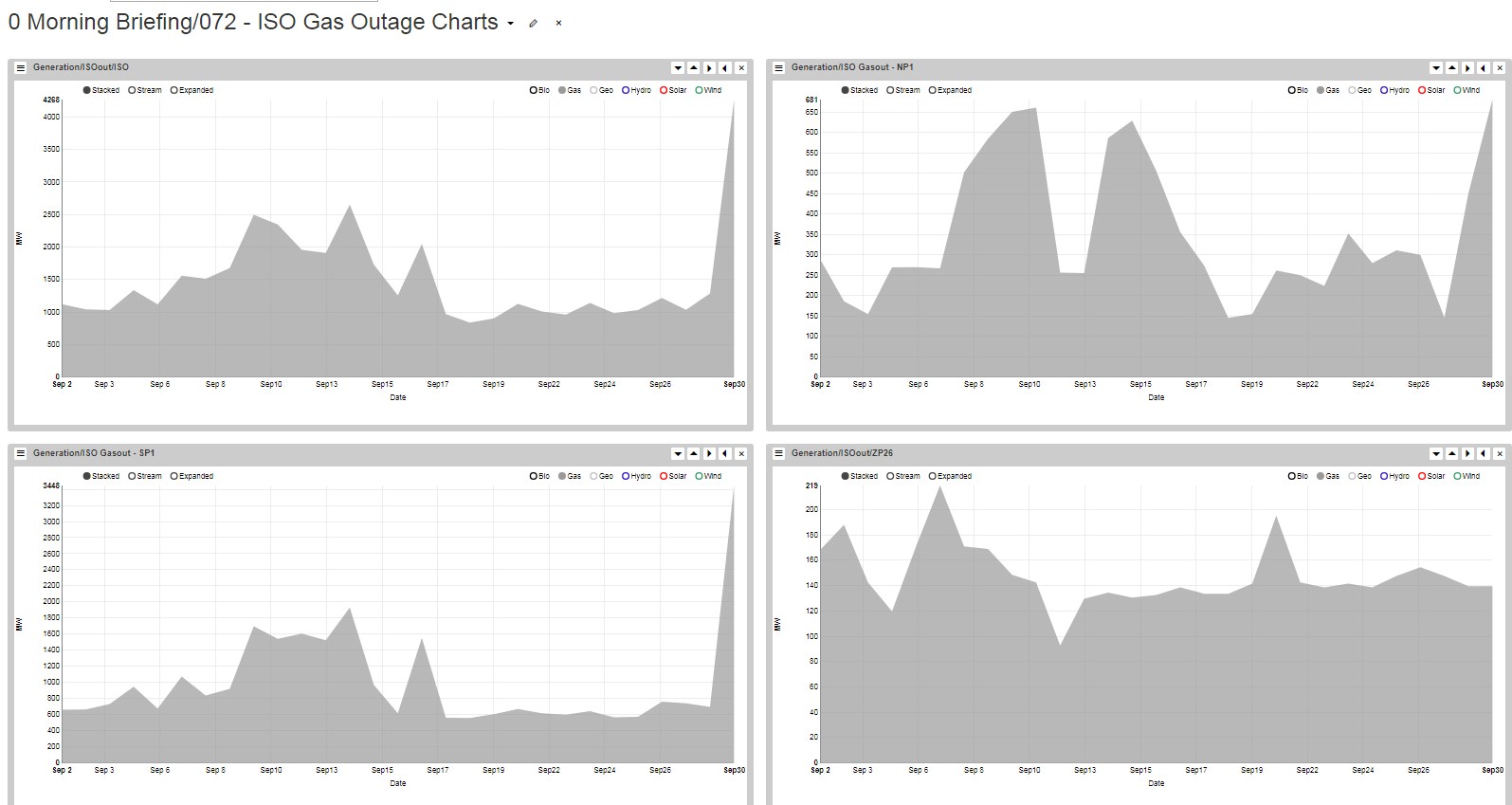 And ISO gas outages soared over the weekend, and most of that was forced, not planned: 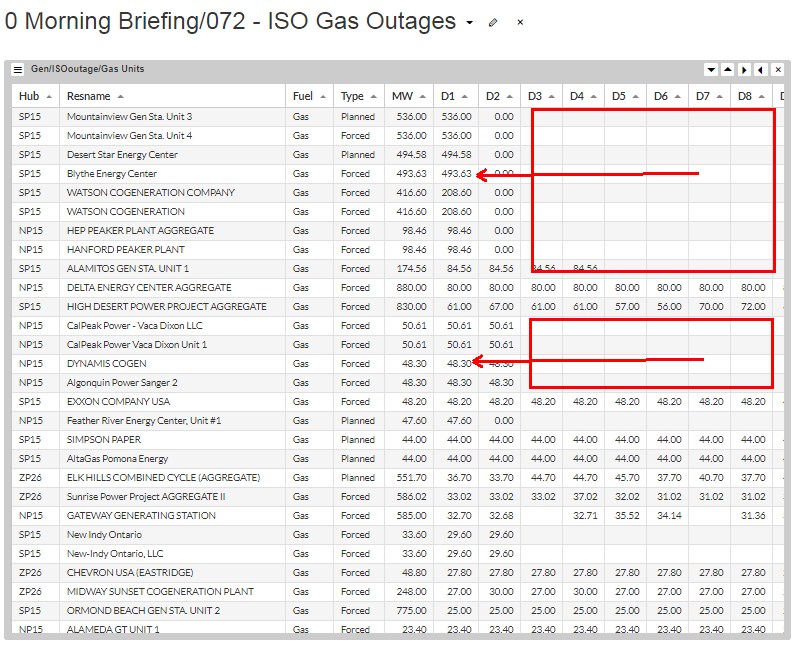 Large blocks of units are offline which explains those SP nom drops.

NP enjoyed a large block of wind energy while the MidC enjoyed a calm and windless day on Sunday. 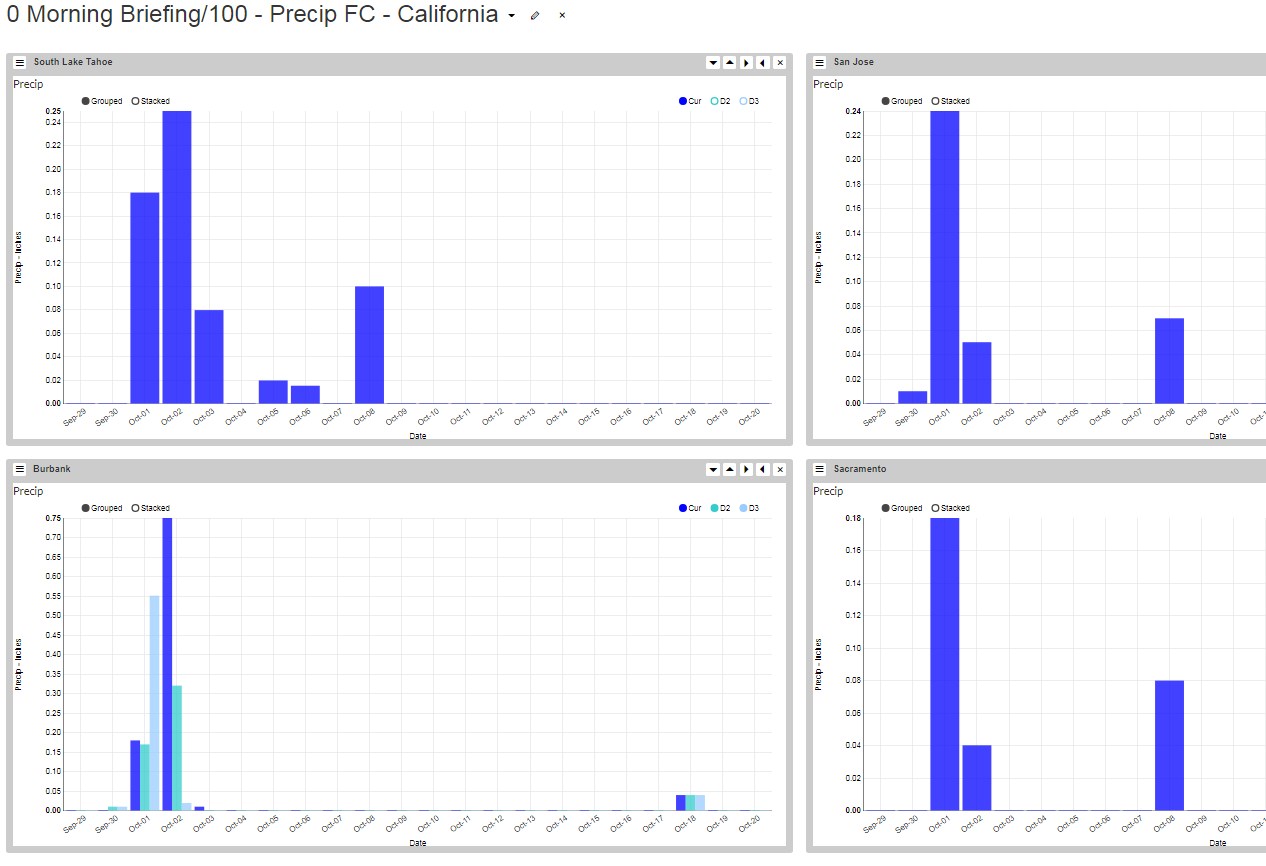 Here’s a change, California is getting some rain. Not much, but more than the state has seen since April. 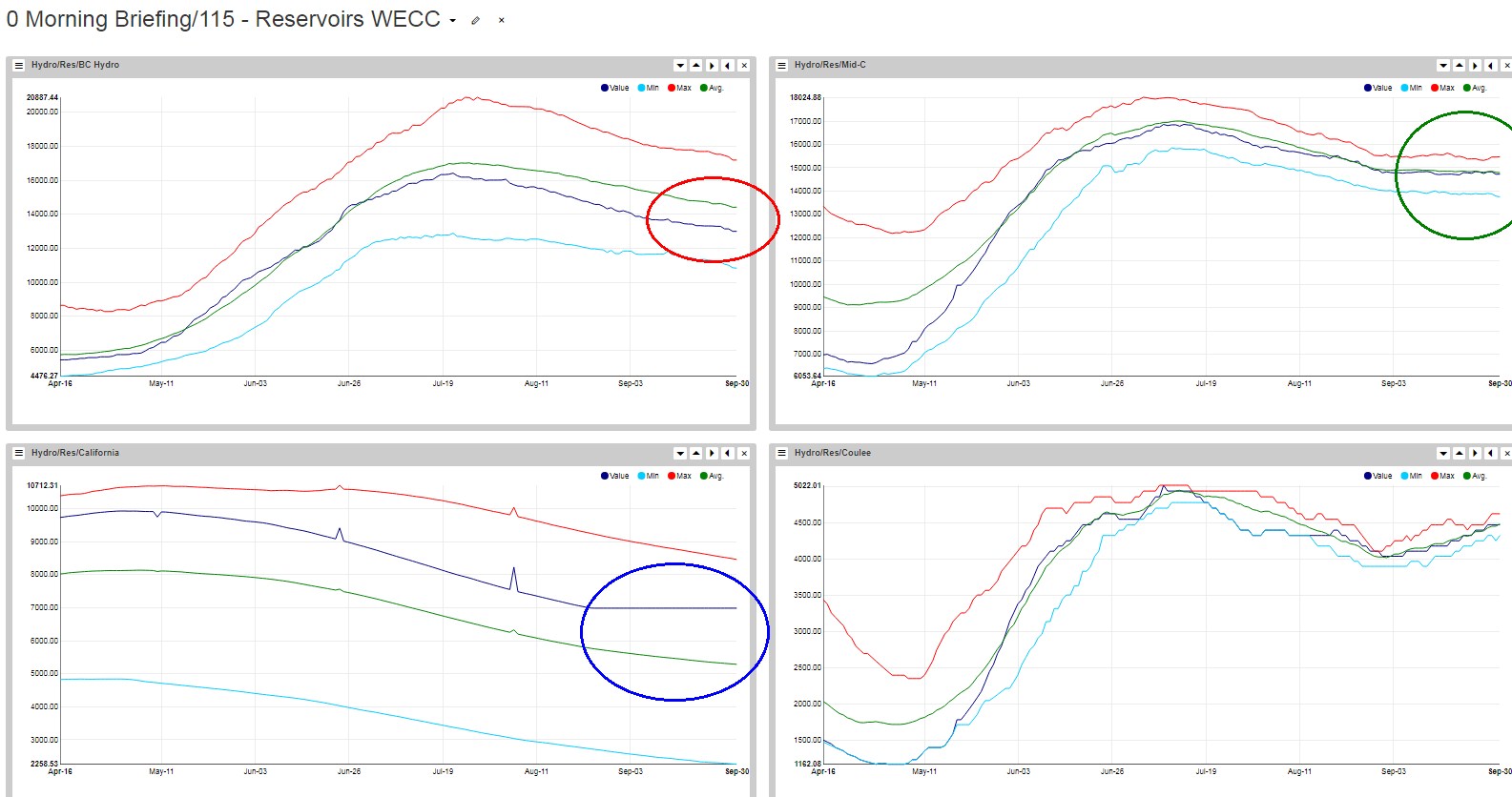 Shasta discharge is above average as is the Pit; most other production rivers are well below normal all of which means ISO hydro energy is falling …

We’d suggest much of that decline is a result of those negative DD anomalies pointed out above; the ISO didn’t need the energy but the state does covet the water.

The MidC gets more than a smattering of precip; in Seattle, it rains nearly every day. More importantly, in the production regions of Spokane and Kalispell, there is almost an inch on its way, and it is only first two weeks of October.

Coulee production is down; its reservoir is nearly full. 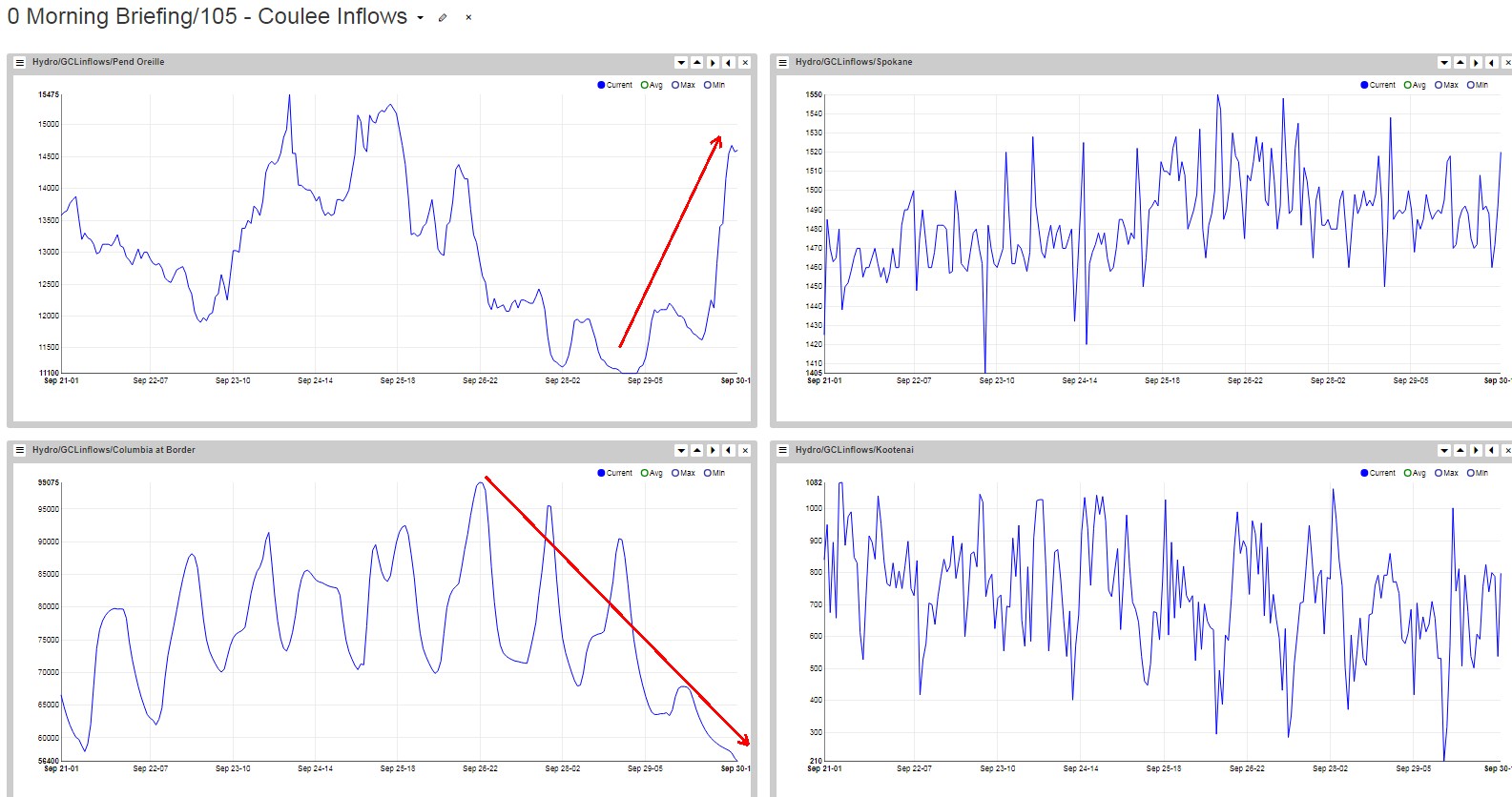 Flows at the International Border are off explaining why Coulee is off.

The Peace is mostly idling away; there isn’t any load in BC and not much energy is flowing southbound on the Northern Intertie. These charts will look a bit different in two weeks, once those rains hit and make their way into the rivers.

Today is STP Monday and the River Forecast Center’s 10 Day offers little “TELL”. Mostly, the ten-day matches last Monday’s STP, but we still think the RFC will need to make some dramatic changes in the backend of its forecast. 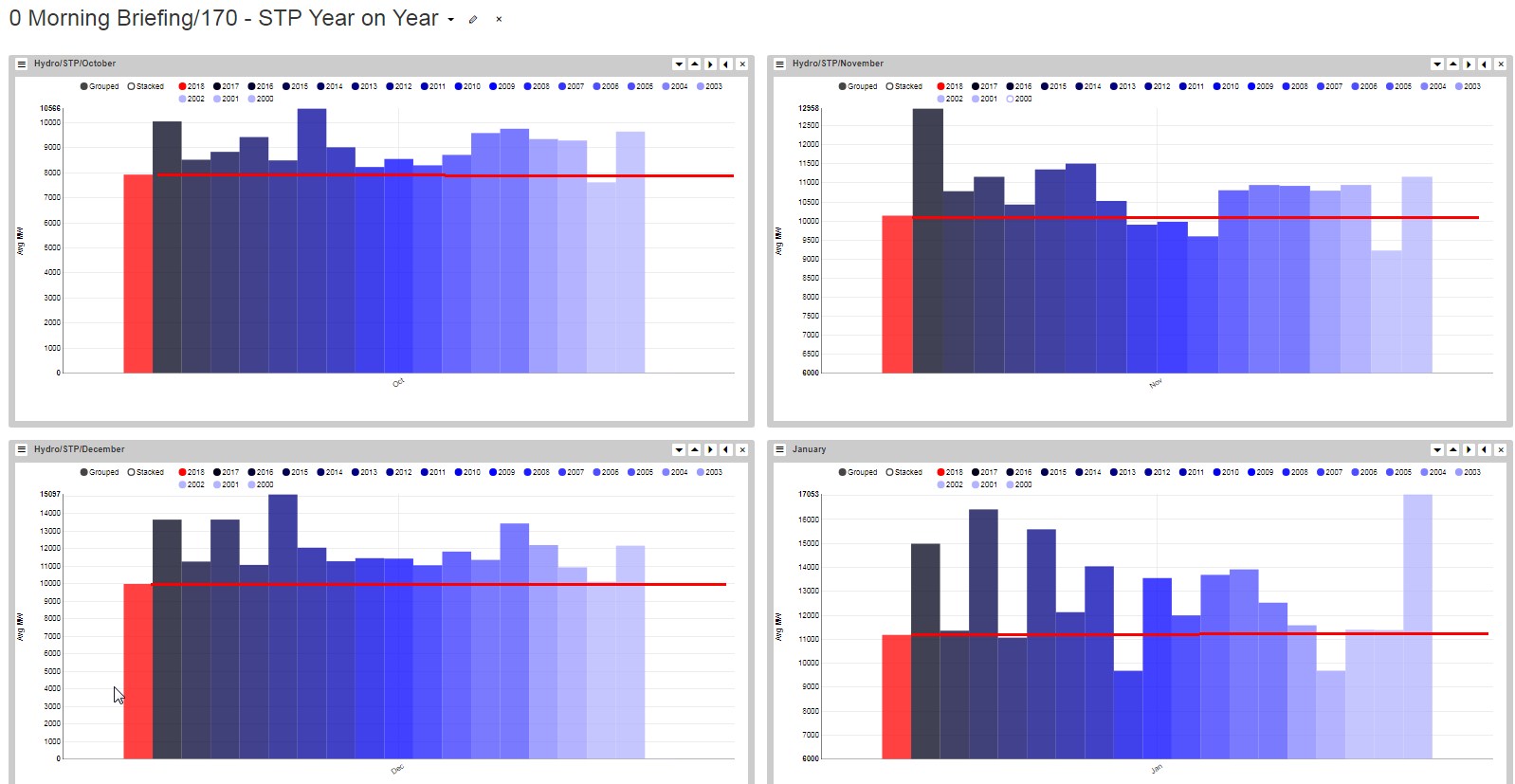 The above is a plot of monthly energy (aMW) for all the STP stations with generation. The red column is last week’s forecast; the others are the actual energy by year since 2001.We believe bumps are in store in Dec; that month is projected to become the tightest in the last twenty. Doubt it. 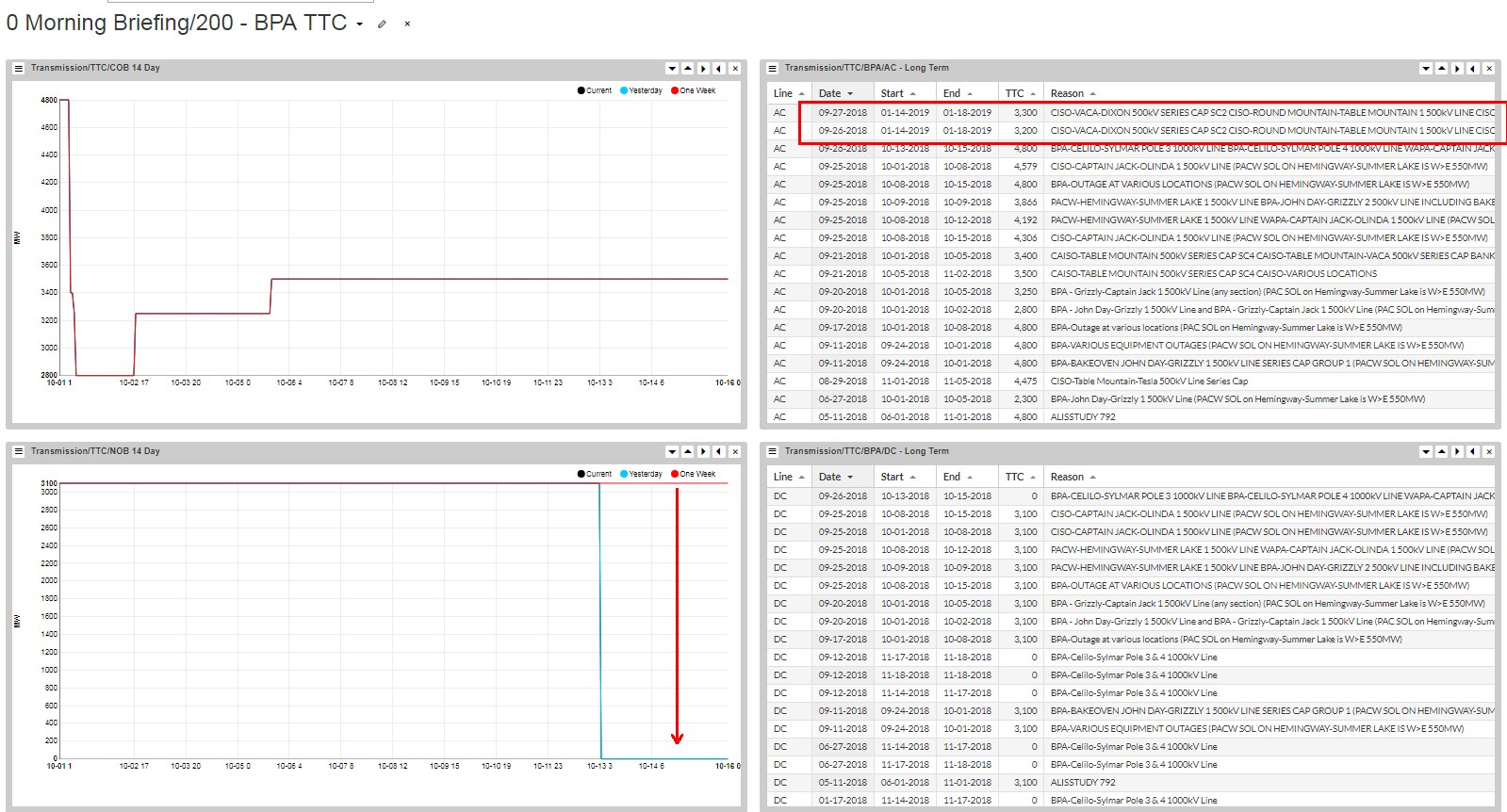 Now we are just twelve days from the DC going to zero; it is showing up in the hourly TTC reports. Also, took note of a new AC outage in January.

The Path26 outage is over, not that it ever mattered; flows didn’t change when it was derated and didn’t change when that expired. Note the dearth of flows on the Northern Intertie; nothing is going north or south. The DC had a massive swing yesterday; one hour touched TTC then it collapsed. The AC shrugged off its derate; flows didn’t change there, either. Palo cut flows to the ISO, surprised given falling loads and rising prices.

These gas outages in Socal are spooky; we’re spooked, so should you. LA still has another month of potential Santa Ana, but in this forecast, there is no sign of such. The Northwest rains may rain on that Northwest rally and, if they build, that “may” will become “will.”