Fundies are growing tighter; the temps are dropping and the rain is evaporating and the markets staged a small rally, both gas and power. 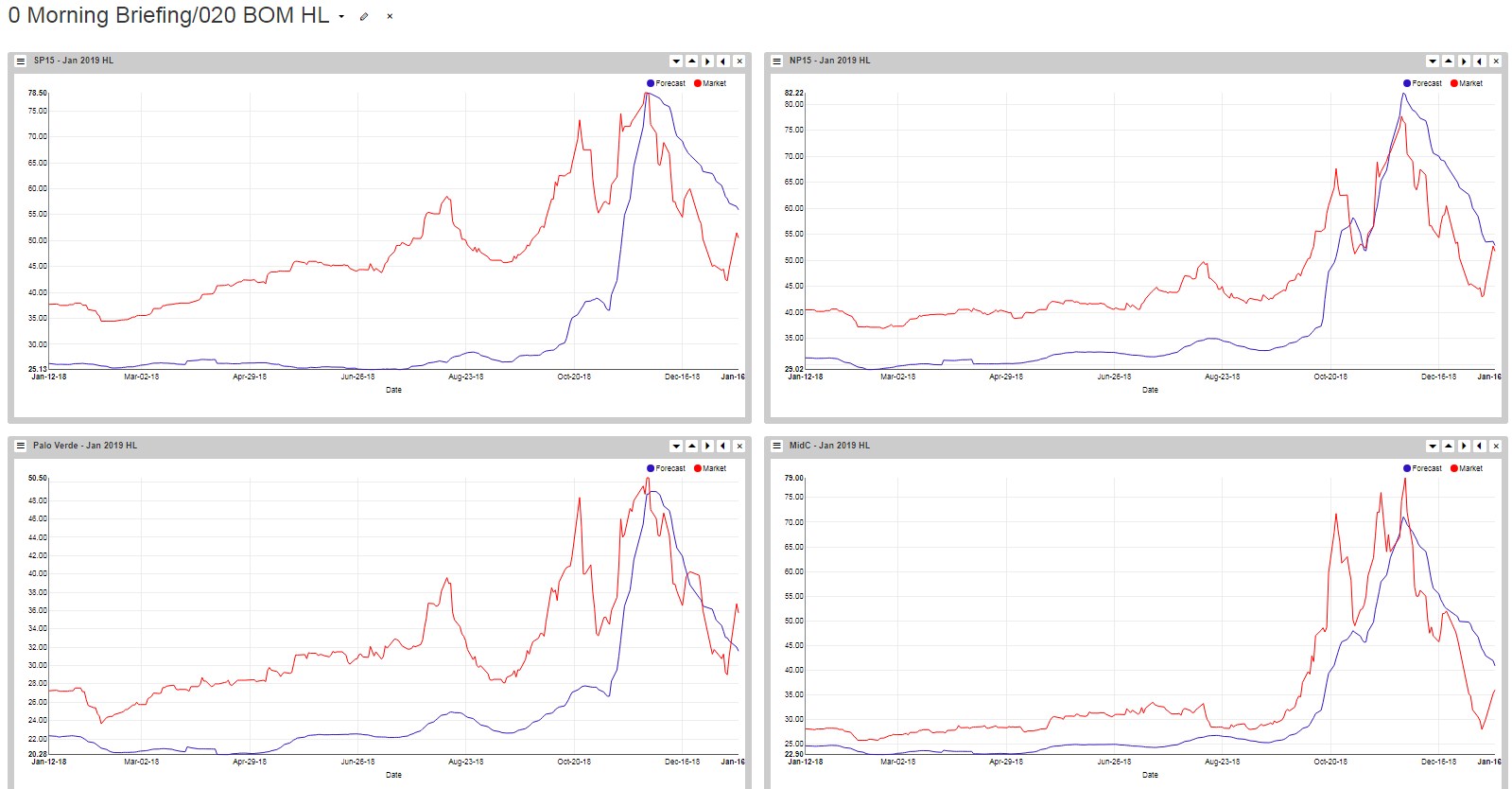 Bom bounced off of six-month lows but seems to have stalled; we think there is room to continue moving up. 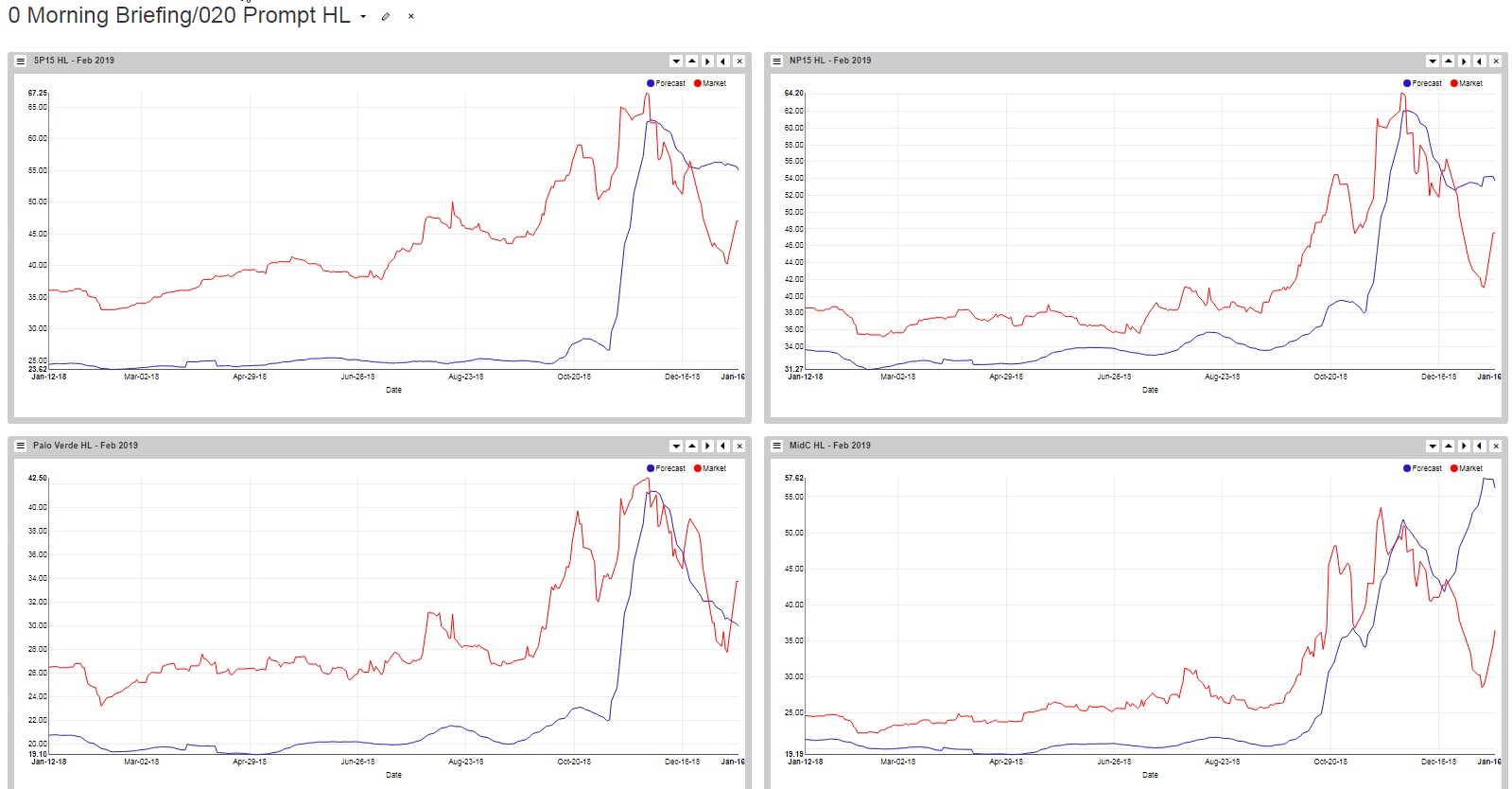 Prompt rallied harder and didn’t take a pause; we think it keeps going up off of falling temperatures and an overall drying out.

The Socal Citygate | Sumas spread tightened up nearly a $1.00; both are up though Sumas has rallied almost $1.50 in a week. Some of Sumas rally might be explained by wildly fluctuating inflows at the border: 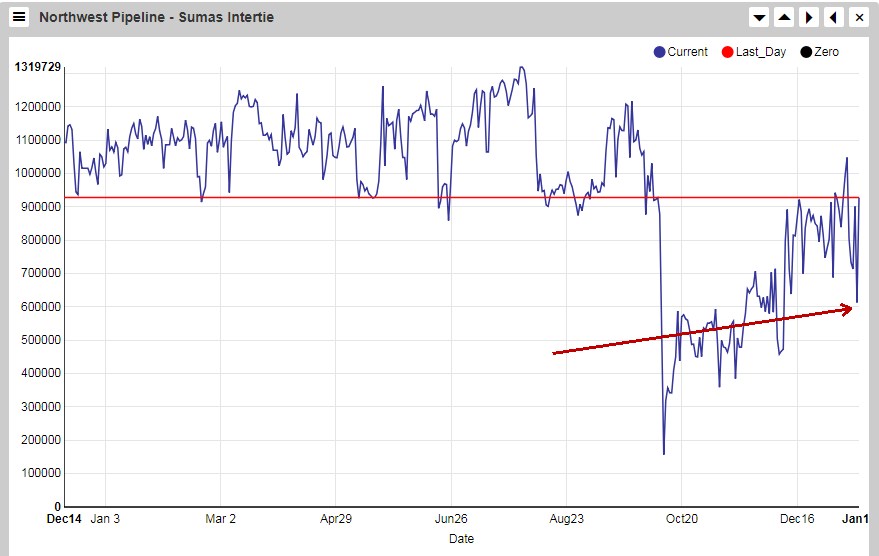 Tuesday’s flows hit a 30-day low, but that was short-lived as yesterday’s exceeded that 30-day average. Most of these oscillations were scheduled; Enbridge is testing pressures in expectation of a return to full pressure soon. 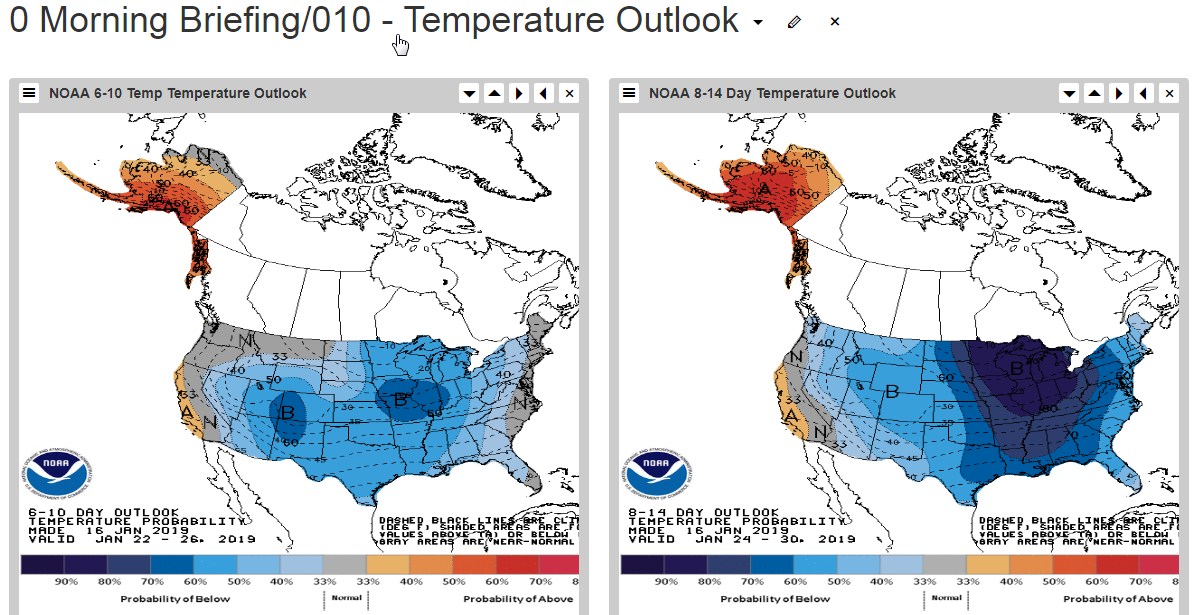 While the east coast has turned bitter cold the west is colder, especially outside of the ISO. The Cal coastal cities are clinging to above average, but as we discussed on Monday, the cold has shifted west and grown in intensity; this isn’t “cold” per se but is much cooler than Monday’s outlook and way colder than last week’s. 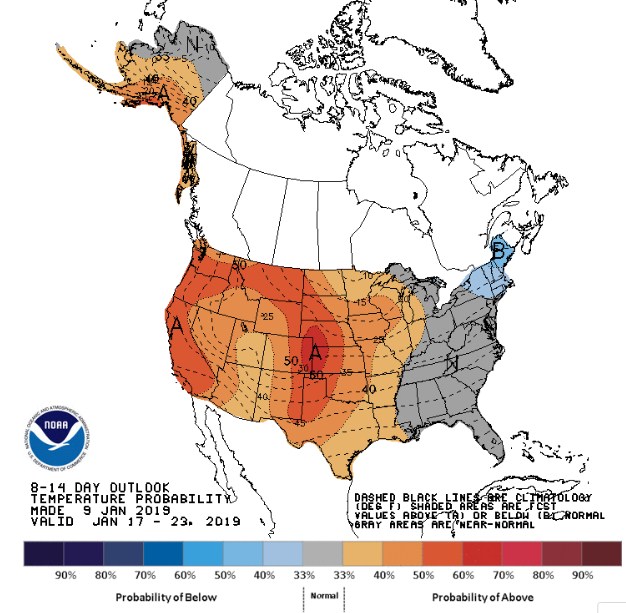 The markets should have rallied off of that implied change in demand, but there is another fundy that is taking the WECC on a more bullish turn – that is the hydro outlook. 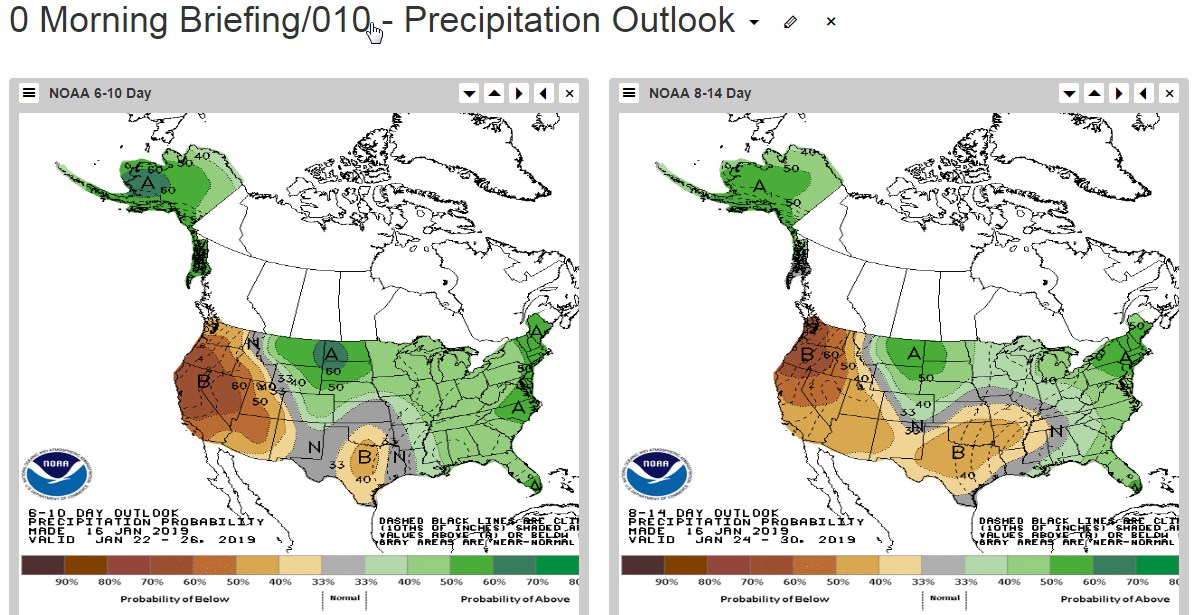 All of the west is bone dry; that’s what high-pressure systems do, they block out the storms. This outlook takes us through what’s left of January and gets us also past the half-way mark in the water year. 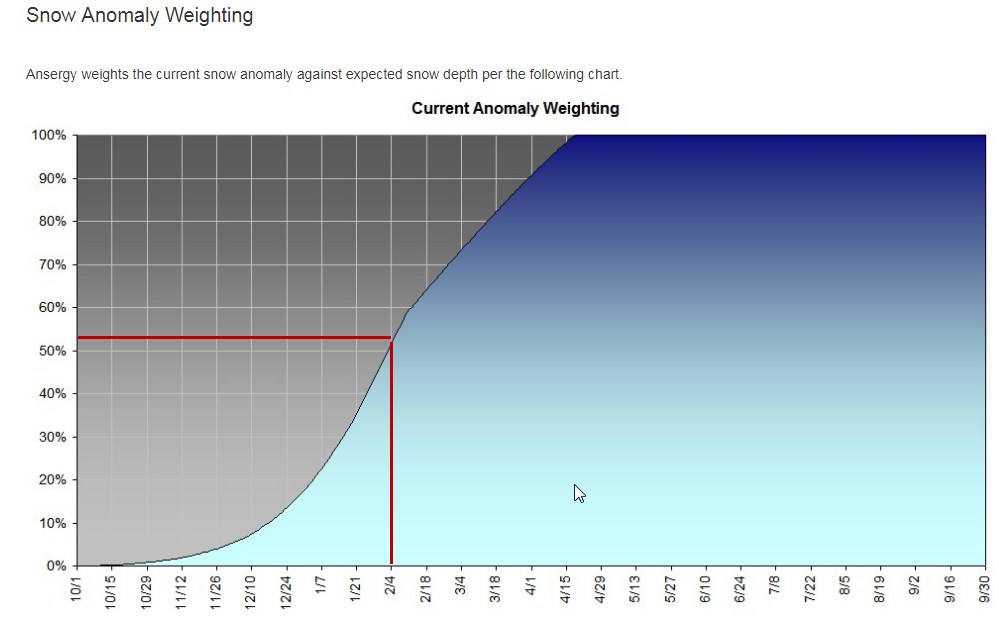 On average, by Feb 1, we’ve realized 52% of our precip for the snow year; Ansergy defines April 15 as the end of the snow year. Some would argue it is earlier than that since all Flood Control drafts are in place by the end of March.

The average of all the gauges at MidC are now at 80% of normal, as of yesterday, having dropped 10% in a moderately wet week; should NOAA’s forecast hold, we’ll be sporting a 70 handle with half the year over. Dry years tend to drive early runoffs that are short-lived; they also are of shorter duration with little draft. 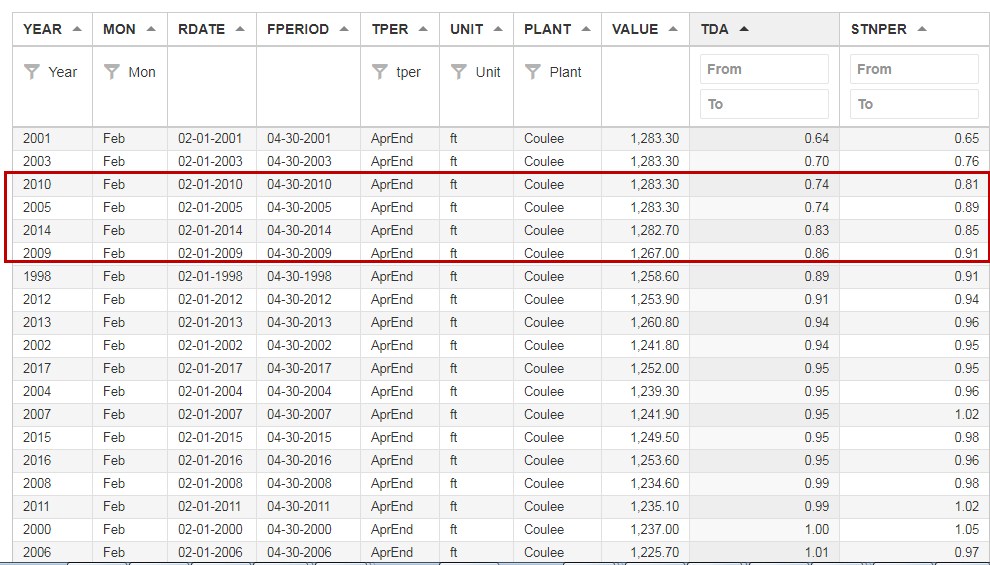 If you assume a water supply in the low 80s or high 70s, you can plan on little or no draft at Coulee. Three of the four design years had no draft; the Coulee target was over 1280′, a higher elevation than today. That’s interesting since it means very little regulated water in Feb-April and don’t expect any low-elevation snowmelt surges; there isn’t low-level snow.

Though we aren’t at a low 80 yet, the NWRFC has the Apr-Aug TDA at 90% as of today, but this very dry forecast during a period that is typically very wet will pull down that number. Point of all this snow chat is that the outlook is growing more bullish with every dry day. 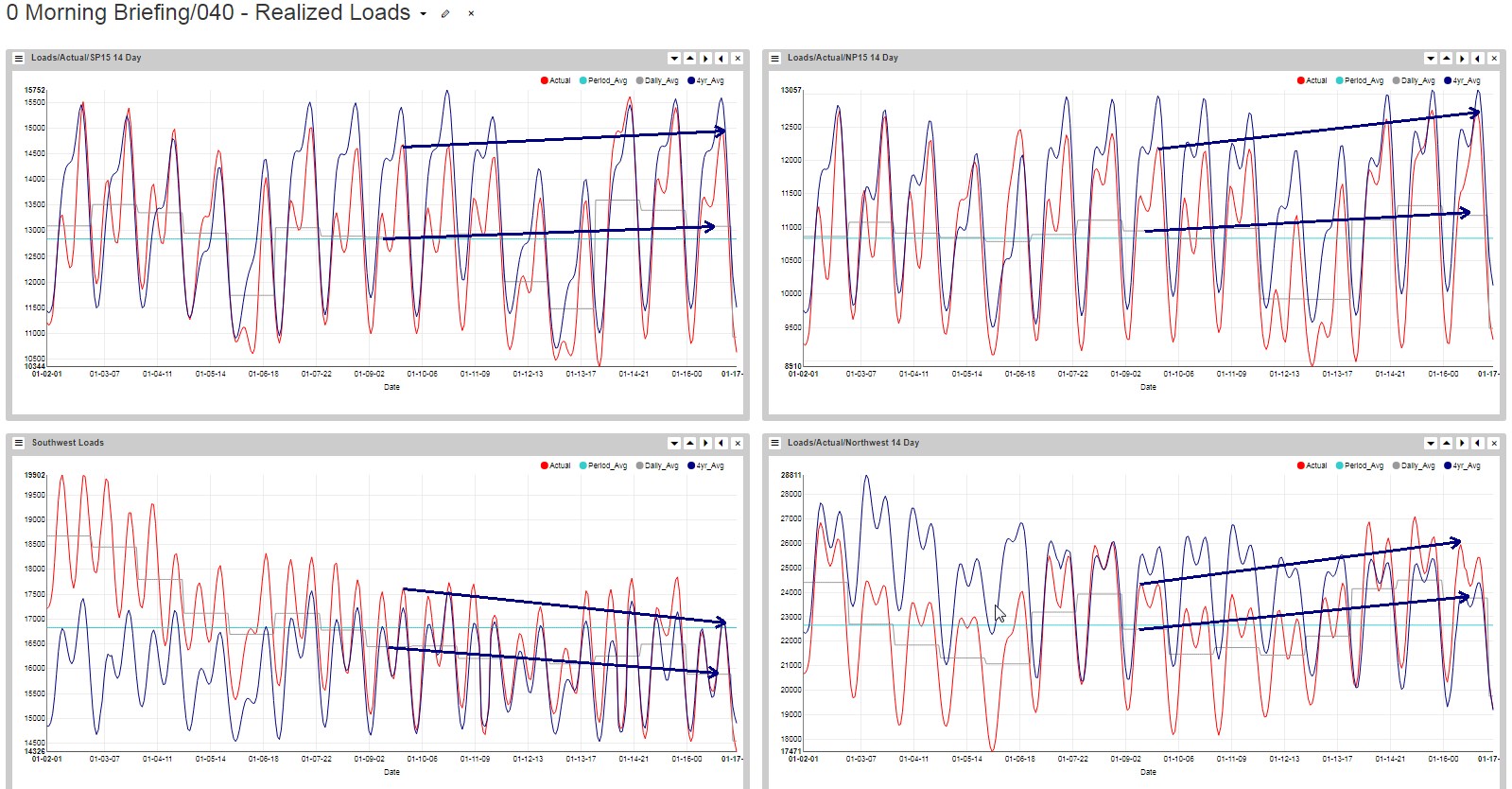 Loads were up at three of the four hubs, all but Palo; the forecast for temperatures will drive next week’s loads higher.

Another source of bullishness has been the weak renewables, both wind and solar. The Northwest hasn’t had any wind energy for nearly a week and the ISO solar tanked over the last couple of days; of course, cash would tighten. 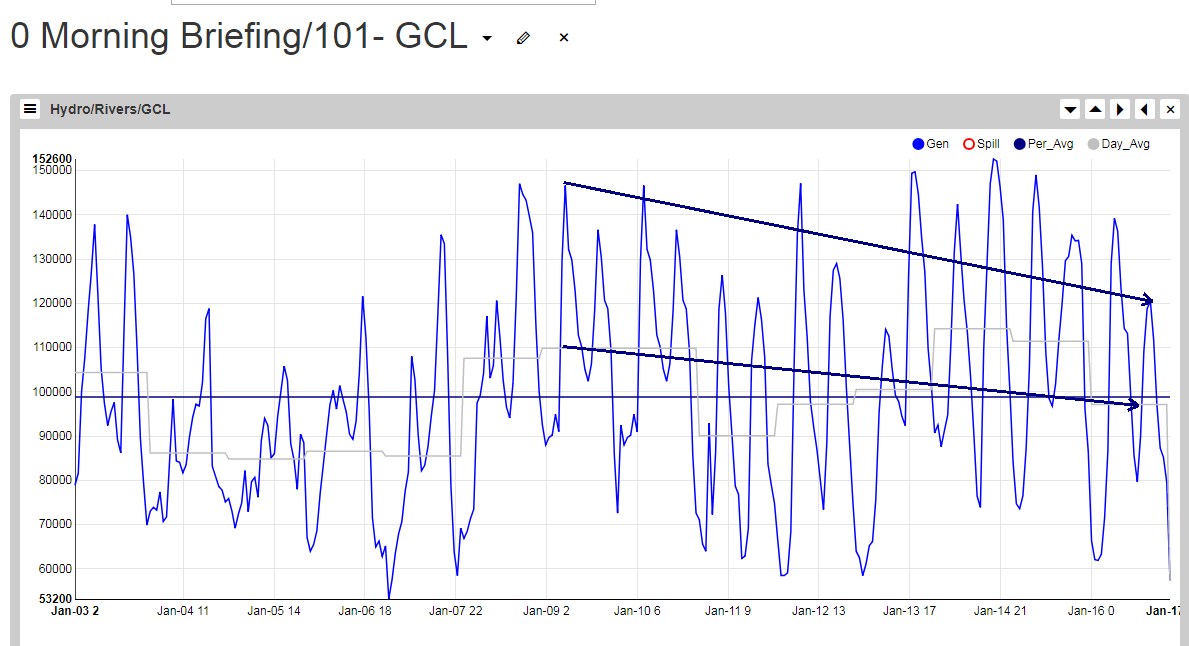 Several of the BC Hydro stations are falling; most are below normal.

California is realizing a bit different scenario; regulated discharge at several of the dams soared the last couple of days. 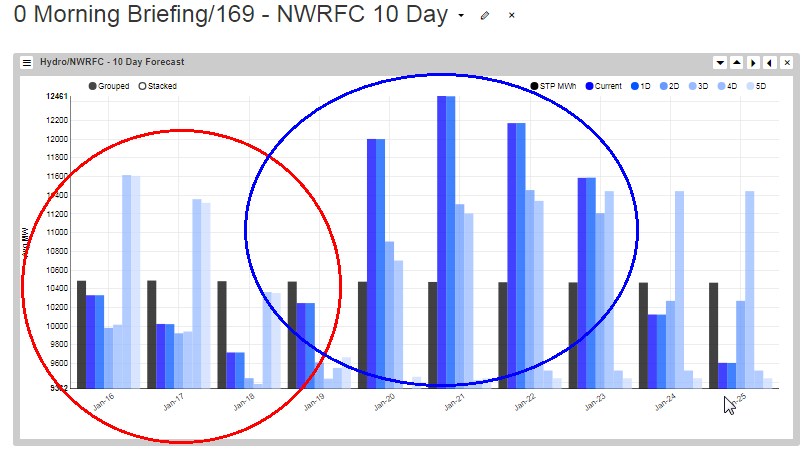 Meanwhile, the NWRFC’s Ten-Day outlook is once again all over the map. Big cuts in Bal week and a rally of sorts next week; perhaps that latter is driven by BPA’s expectation of higher loads?

The Northern Intertie flowed energy into the MidC for the last four days, but today its back to importing into Canada. The AC remains derated as does the IPP line.

We were bullish last week, we were bullish on Monday and looked like we got paid. Usually, I’d take profits, but there is nothing in this outlook that isn’t bullish, we’d stay long the front, both the ISO and the outside hubs.