I hope everyone had a pleasant and safe New Years. I spent mine on Whidbey Island and enjoyed this sunset over the Olympic Mountains. 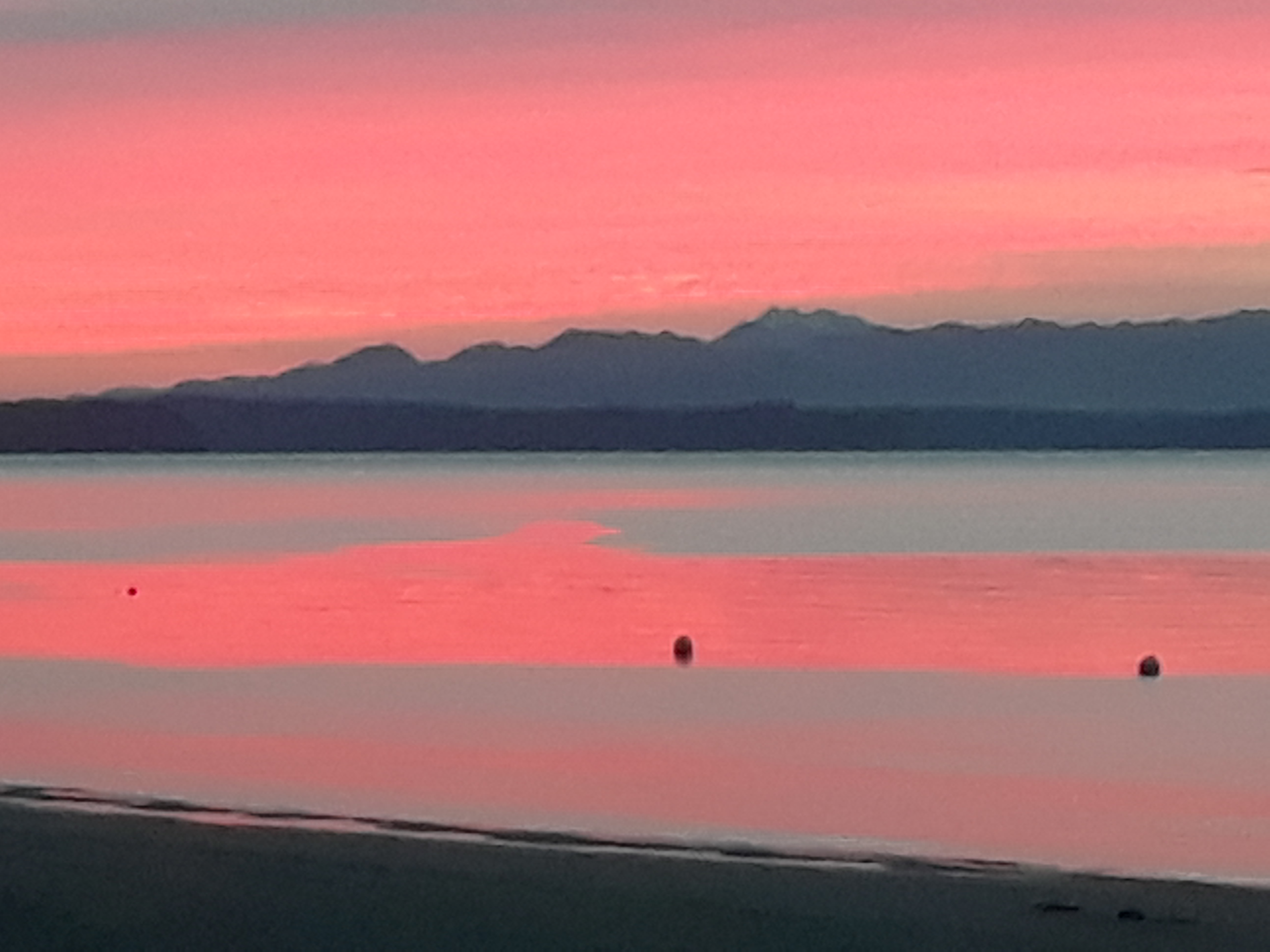 Pretty, huh? That was the end of 2018, which was another exciting energy year – they all are, right? Last year we saw Socal Citygate dominate the markets, until that explosion in central BC on Westcoast’s pipeline. Then, all of a sudden, right before the WSPP meeting commenced in Palm Springs, Sumas became the WECC’s driver. A legitimate fear spread across the market that there wouldn’t be enough gas to serve winter loads, the Northwest would see rolling power and gas blackouts.

But that didn’t happen, instead,  Winter never arrived, and Enbridge quickly restored service, most of it anyways, and MidC saw massive price gyrations in its term market. Now, Citygate is back to being the driver, Sumas is rapidly fading. On top of the gas issues, the MidC also enjoyed an extremely dry fall, at one point, around the start of December, the hub’s cumulative precip was about 50% of normal, but all that changed with significant rain and now its closer to 90%.

And 2019 is starting with a whimper, weather-wise. 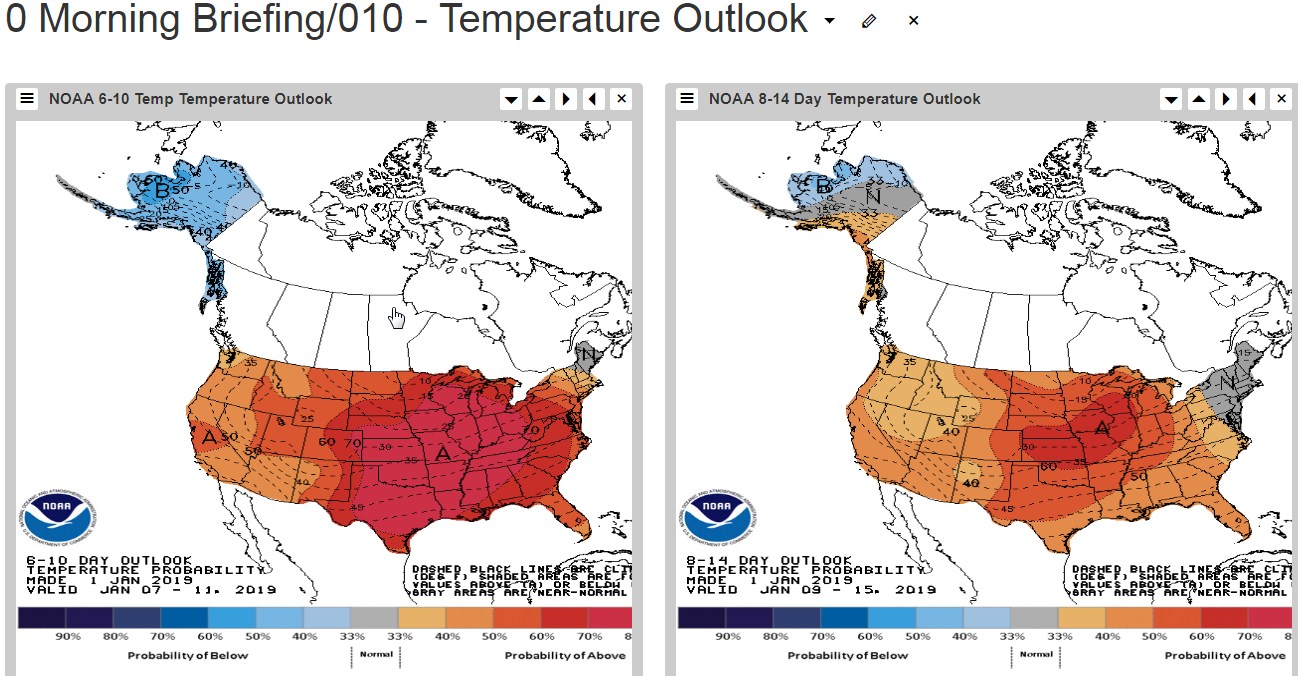 The entire USA (continental) is warm in both the 6-10 day and the 8-14; these maps take us half way through Jan, the new BOM.

Not only is it warm, but it is also wet; most of the production basins will see above normal precip over the first half of the month. Given the warmth, much of that will come down as rain; only above 5000 feet will snow accumulate. Tough year to own a ski resort.

Surprisingly, the Day-Ahead LMP markets staged a rally yesterday for today. Well, all the markets but Palo, the congestion was priced in across most on-peak hours for PV, but not at the MidC. That hub hardly congests against either NP or SP. 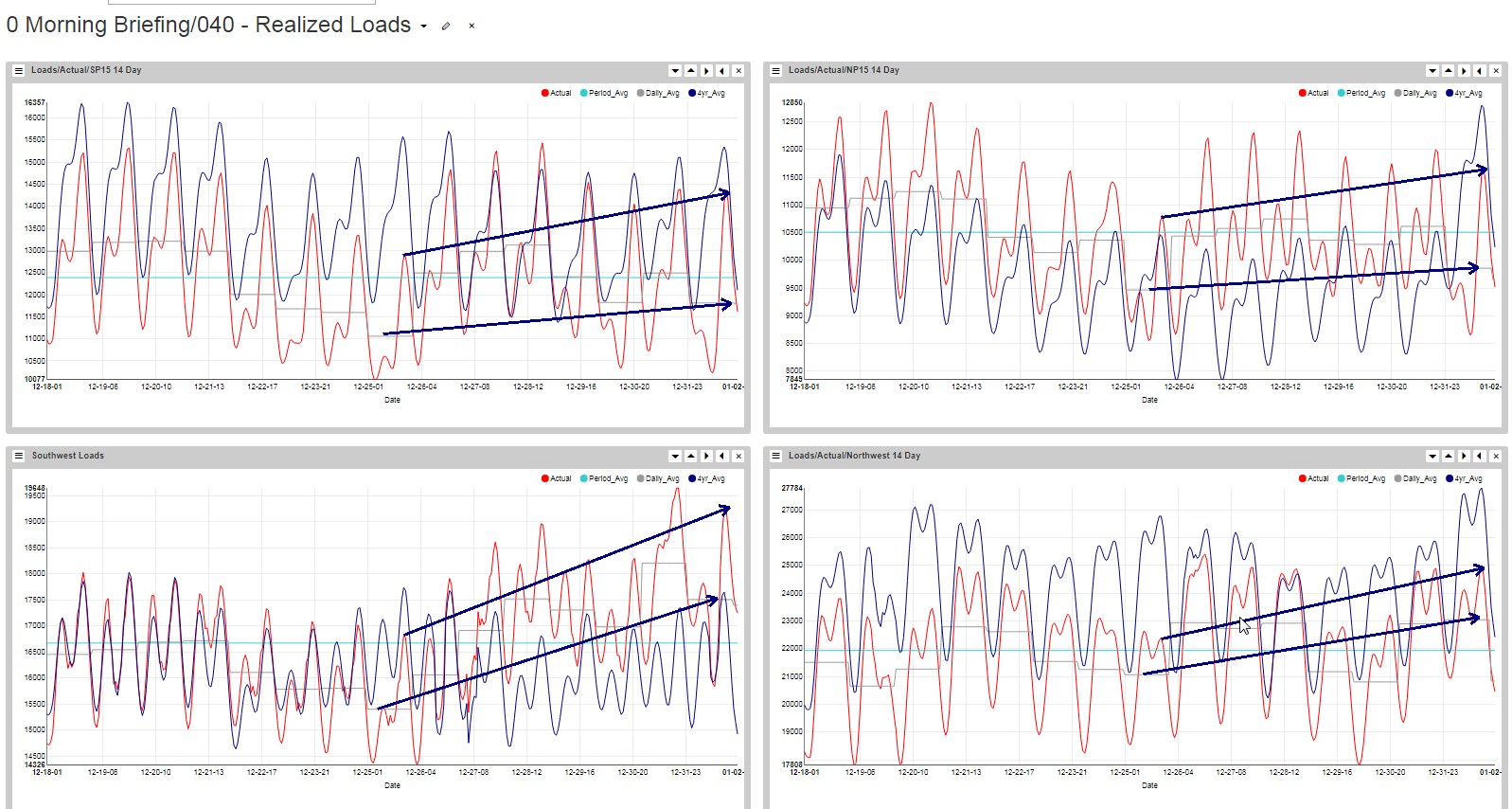 Some of the tightness is explained by rallying power demand, all four traded hubs are up, week-on-week. That doesn’t say much, the pivot date was Christmas, but yesterday was New Year’s, so the comparison was holiday to holiday. Strange that Palo saw the sharpest rally but still congests into SP. 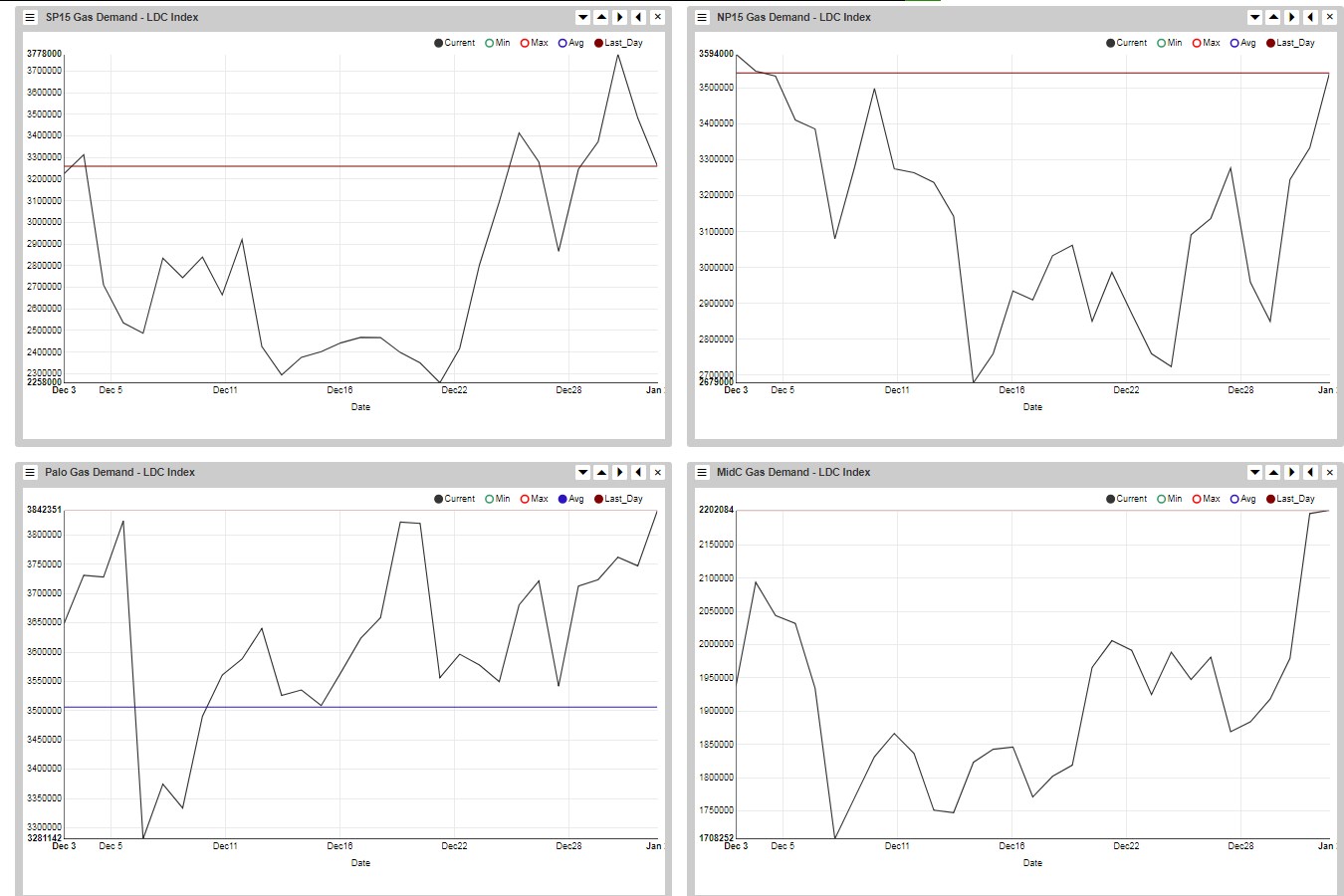 Much of the price strength is explained by cold weather in the south and which drove high gas demand. Socal set a winter peak a few days ago, so did Palo.

Socal Gas’s system sendout matched last winter’s high; if you recall, the prices then gapped up into the teens. That didn’t take place this time, Socal Citygate didn’t move despite the big loads.

Some of this can be explained by the short duration of the cold and the rest by timing – this cold took place over the holidays, most traders were at home counting their bonuses. There was no one around to hype up the cold. 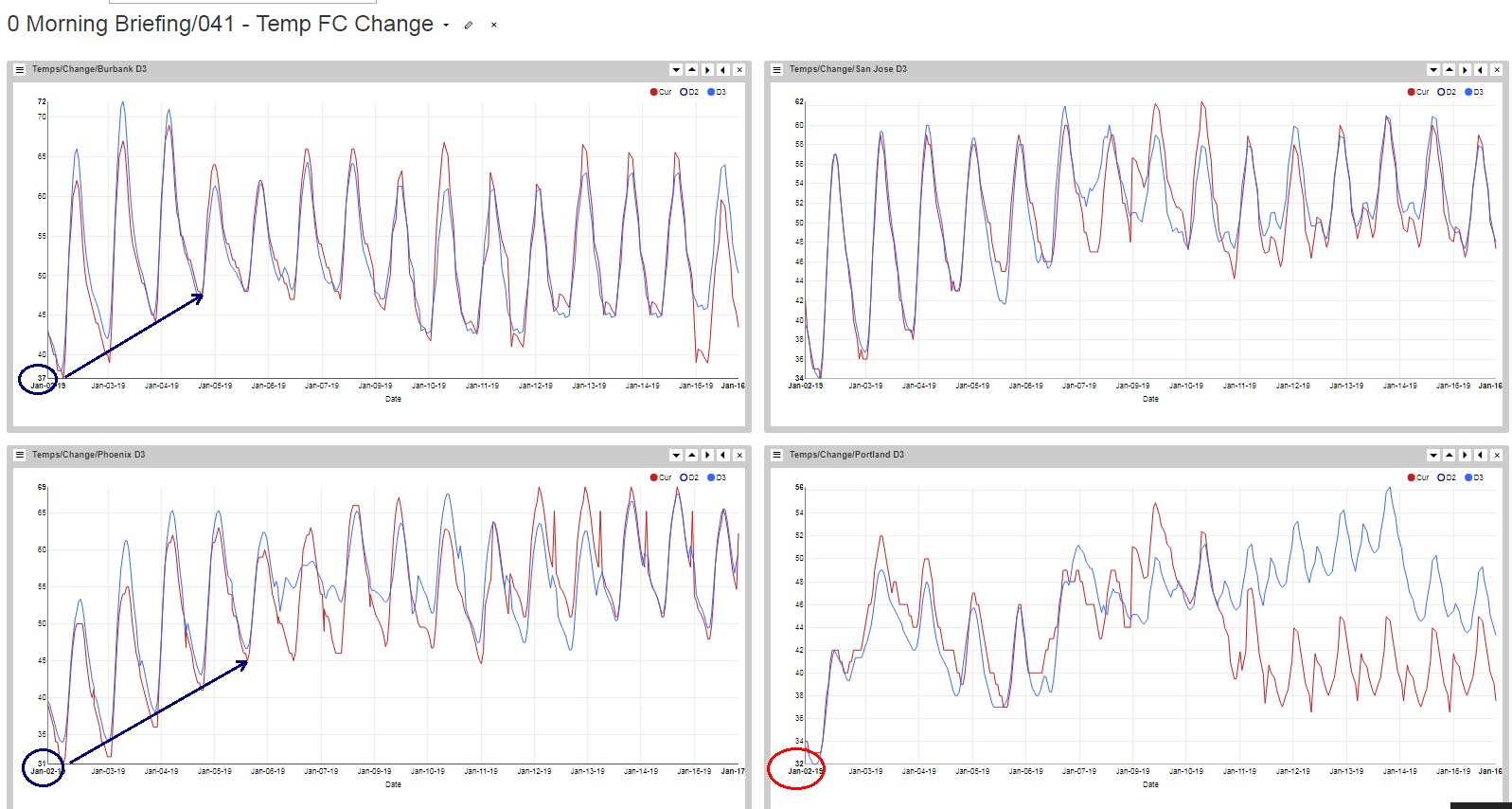 And it is short-lived, low temperatures at both Burbank and Phoenix will rally ten degrees. But let’s stick with gas as I have a few more observations to share.

The above chart plots daily change in total Socal storage. Check out the deep draws, nearly matching last winter’s peaks. This is interesting as it proves Socal can pull 1BCF from storage when it needs to; not only did they pull that BCF, the price didn’t move. Contrast the draws over the weekend versus last summer, only half as much then as now. Why is that? Why didn’t socal pull a B last summer on those sweltering days? Is summer SP worthy of those massive term-market premiums without these Aliso constraints? Will Socal allow a B to get pulled next summer on a sweltering day? 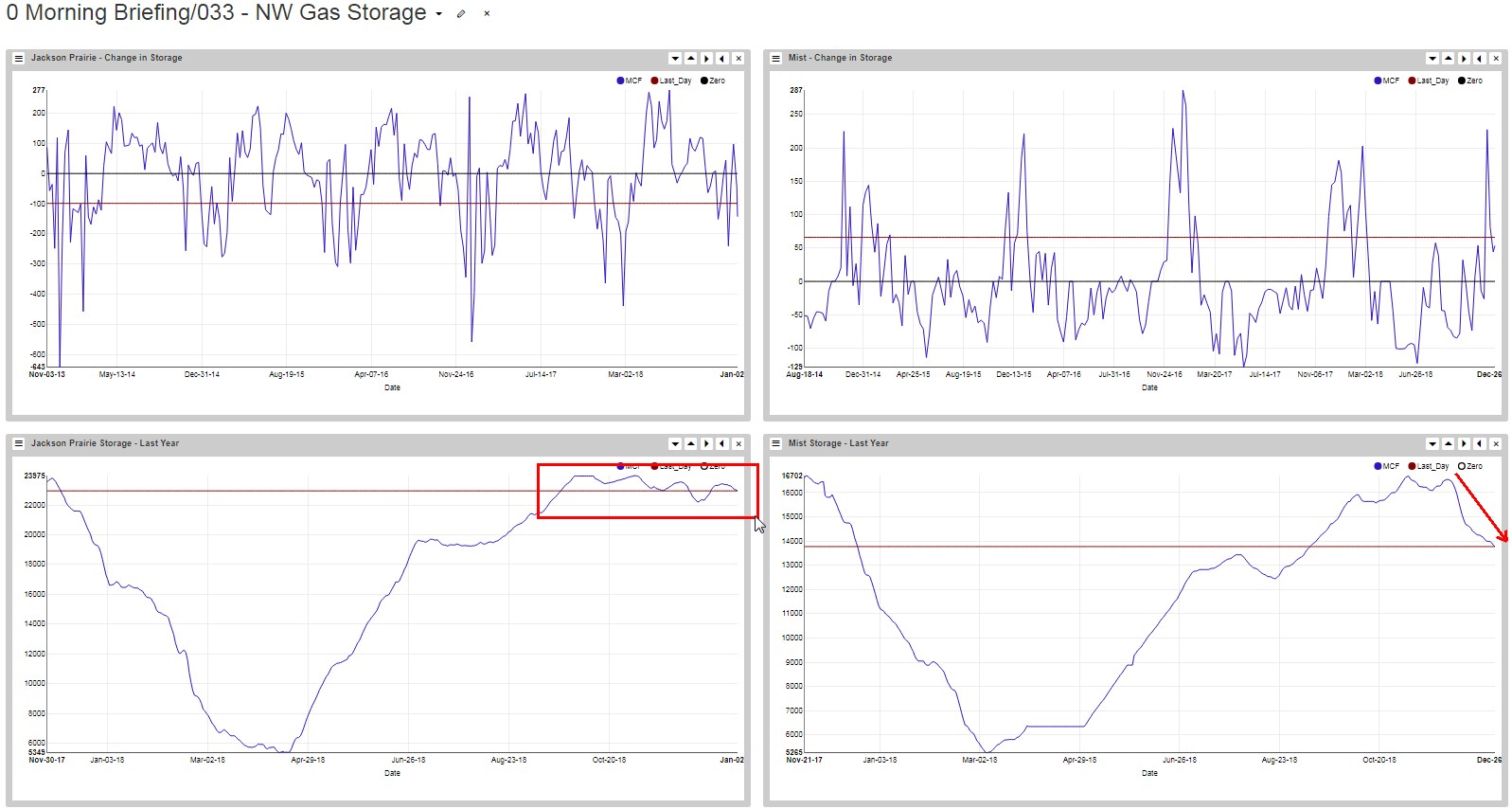 While on storage, take a look at Mist and JP. Mist was pulled hard during the Sumas crisis all the while JP didn’t budge. How ironic, when gas was tightest the facility had builds or modest draws and now has more gas in storage than perhaps ever as of Jan 1. That is bearish for Sumas suggesting there is more room for the term markets to come off. 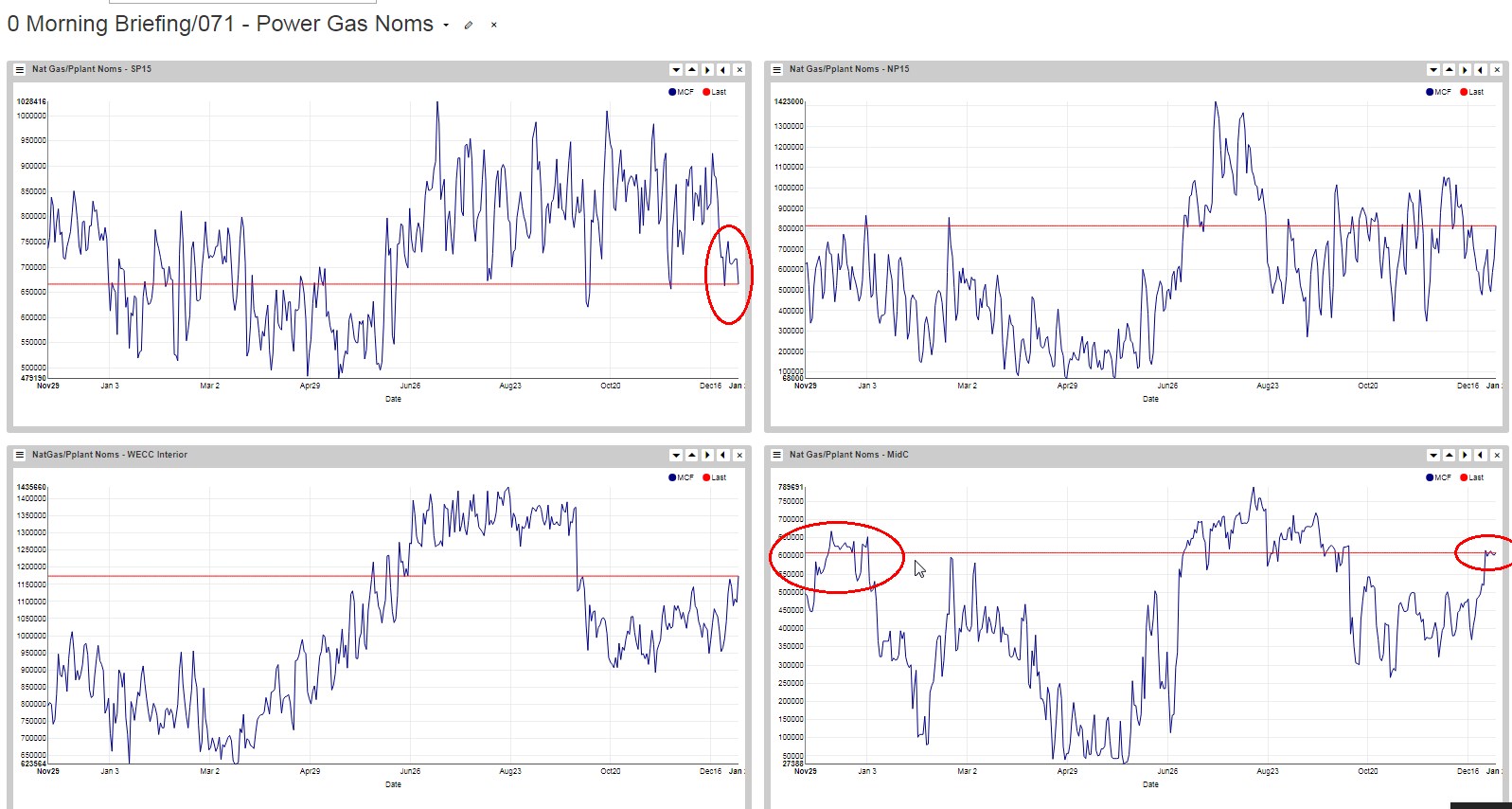 Socal system sendout was at a seasonal high but power noms cratered at SP all of which underscores how the ISO leans on imports from ZP to serve SP loads. I could have proven that statement by posting Path 26 flows, but the ISO pulled that critical market information for nefarious reasons. 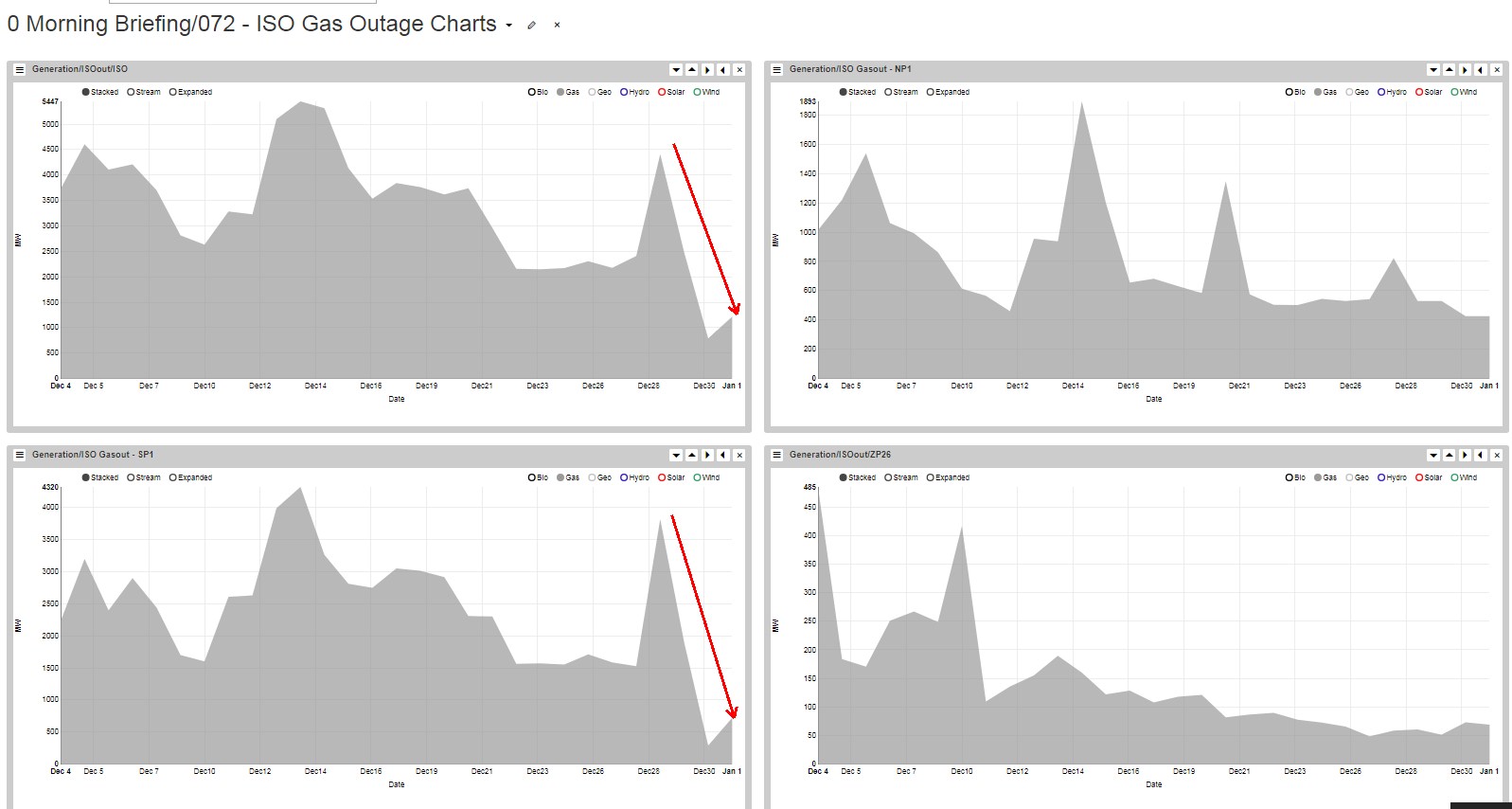 Gas outages at SP cratered with the expiry of 2018, but we’d expect these to rally as the hub prepares for summer. Though in this new world, SP’s gas units are just standby units because of high Citygate prices; now the hub leans on its neighbors to serve its load. 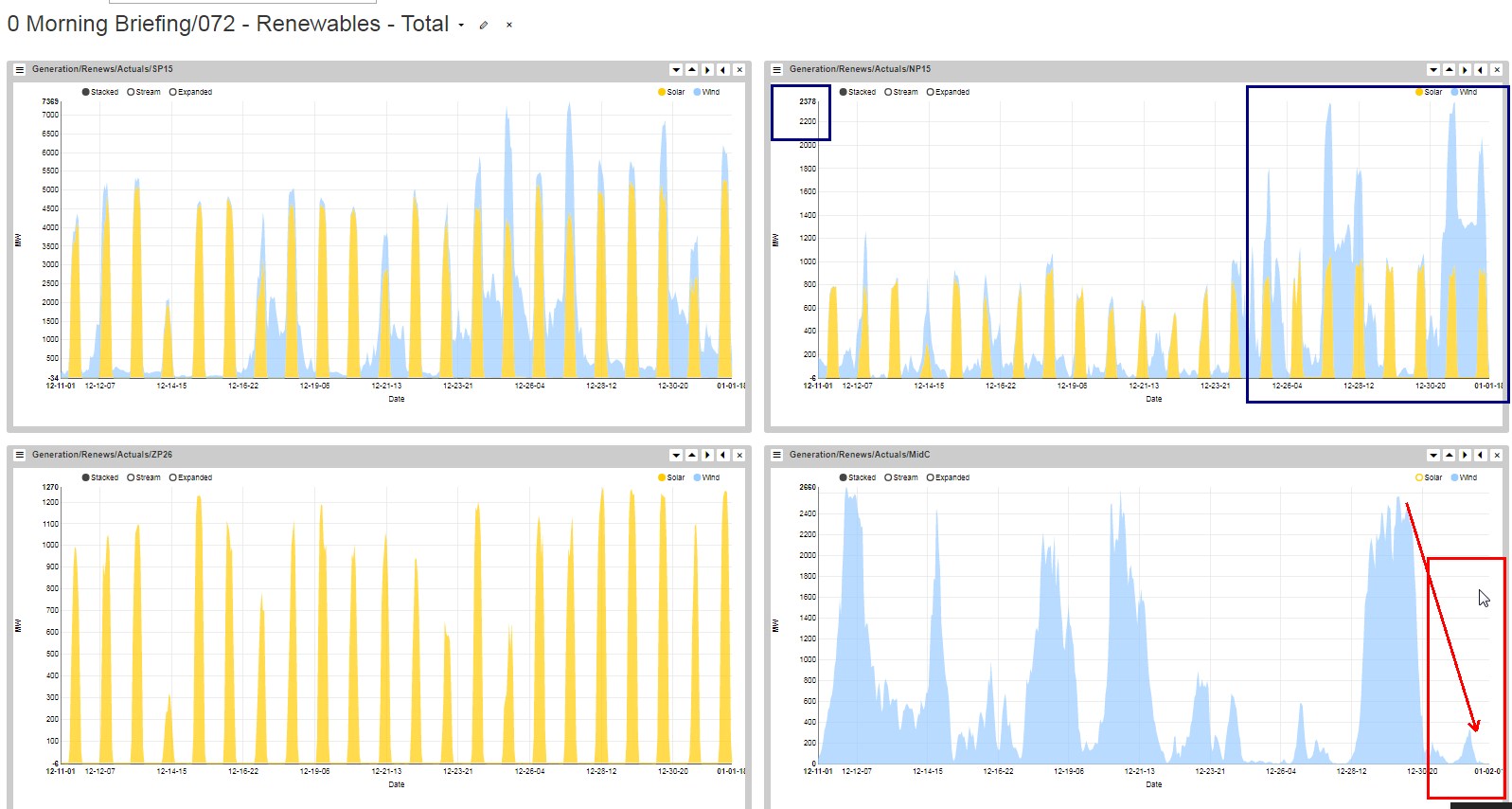 Strong renewals over the holidays; both NP and SP had big wind while the MidC had no wind yesterday. 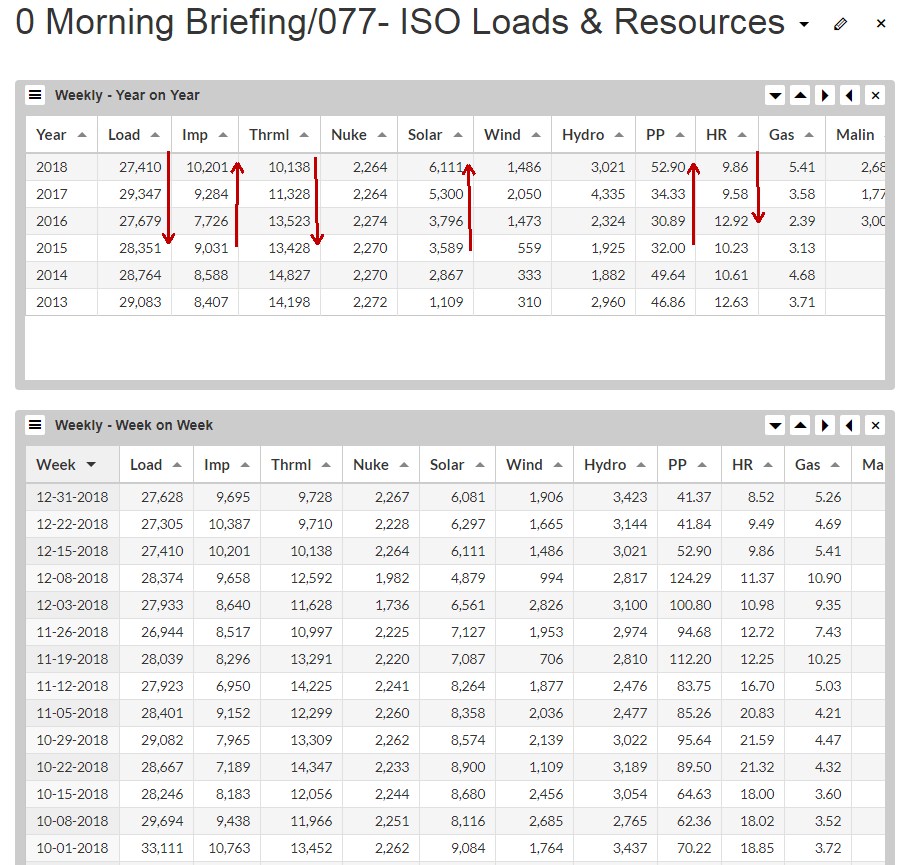 This dashboard summarizes weekly fundies inside the ISO (there is a daily version of the same). We can easily draw some conclusions by comparing last week against the same week from prior years.

In the fall, the California water gurus were drooling over another El Nino, a big and wet water year. But that hasn’t happened, there were a few storms but more dry days than not. Now the state’s rivers are all below average, cumulative precip. 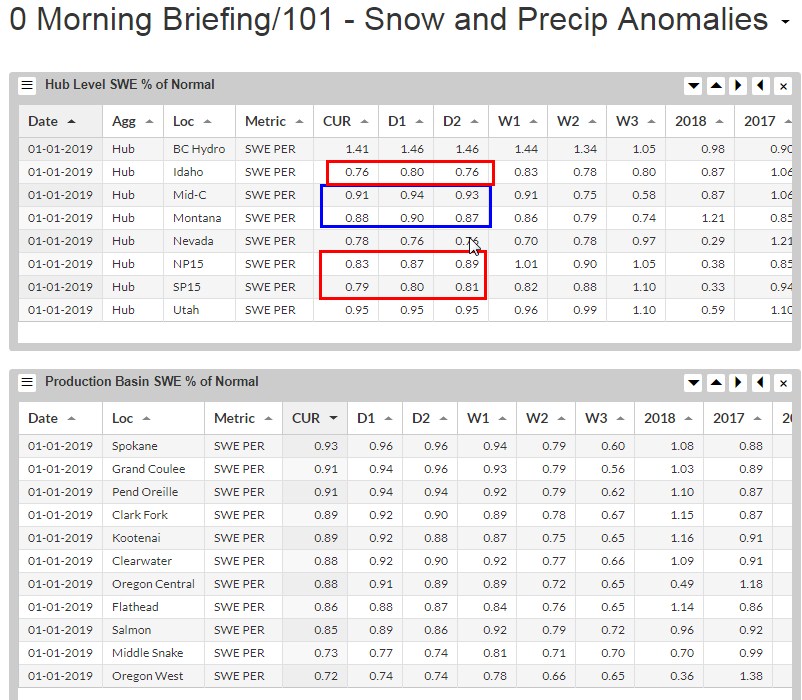 Three weeks earlier, both NP and SP were above normal and now are around 80% each. The MidC staged a rally, moving from the 50s to 90s but Idaho hasn’t changed, the hub remains in the mid-70s. I like Ansergy’s historical weather image tool, useful for capturing changes across time. Let’s see how the snow year has unfolded: 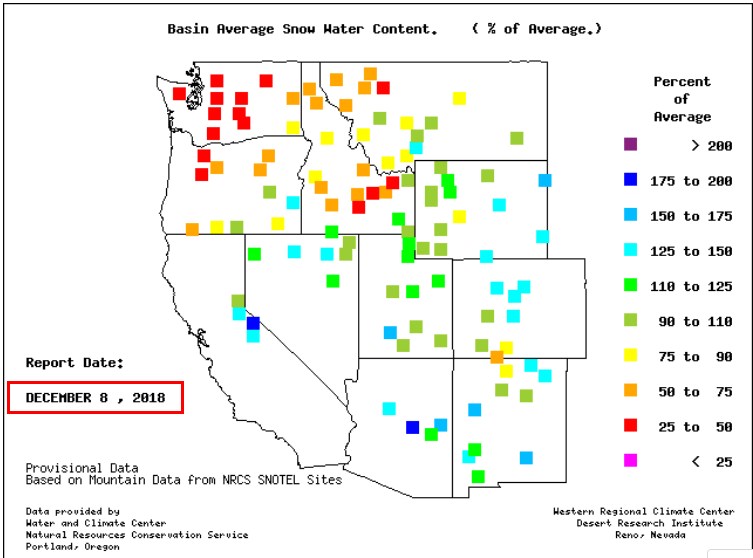 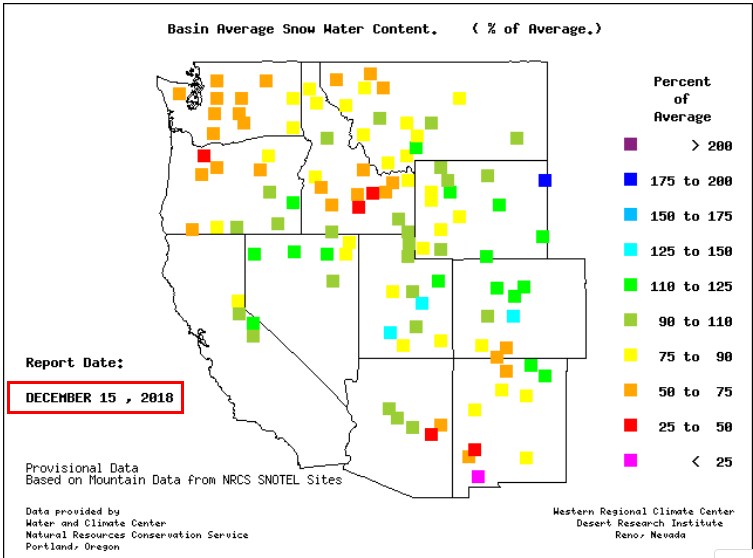 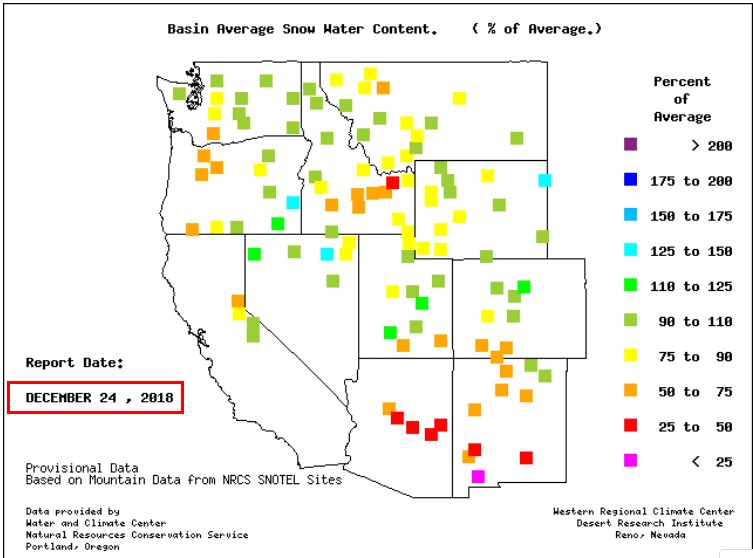 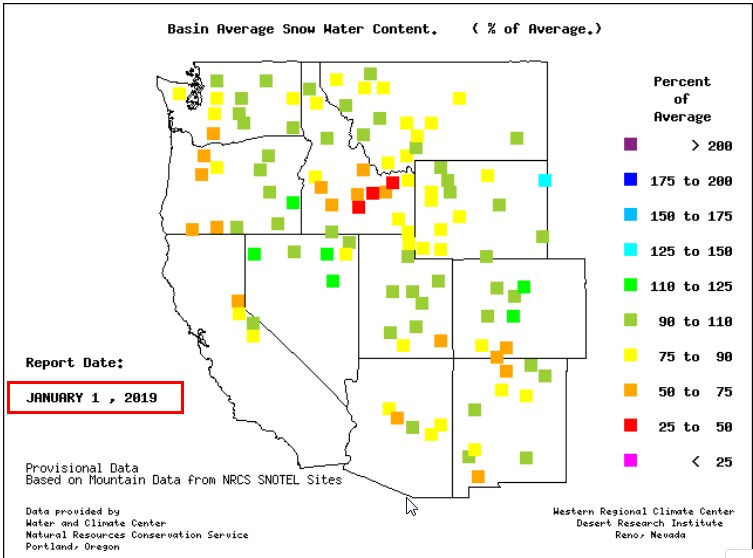 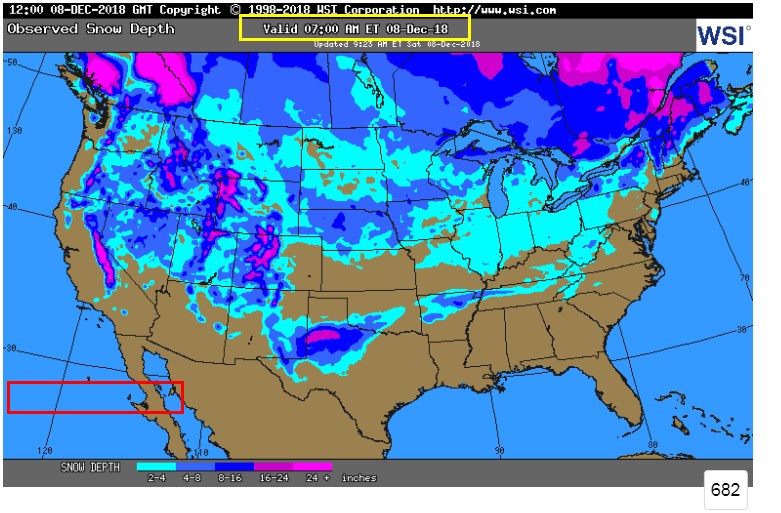 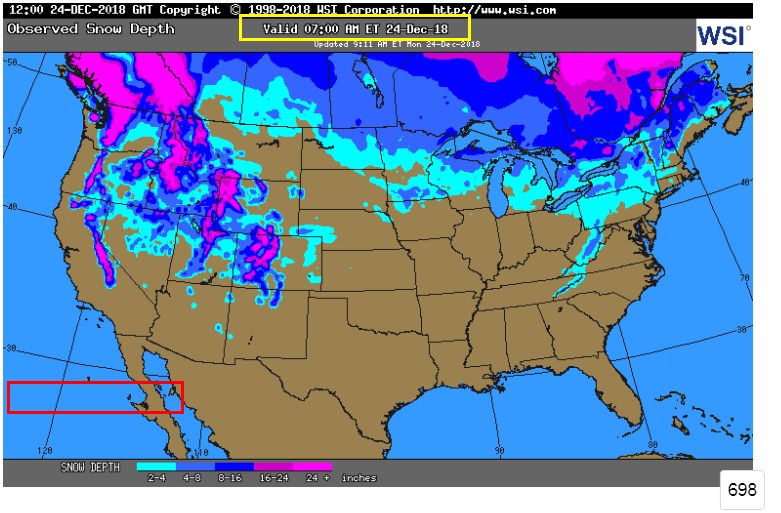 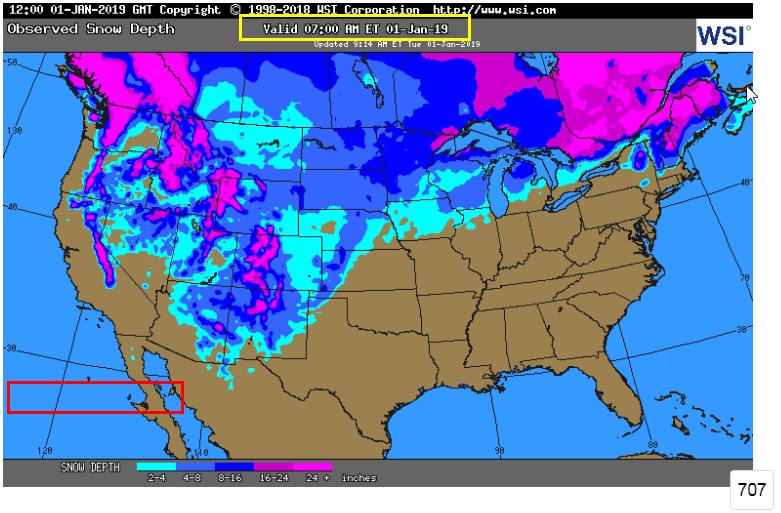 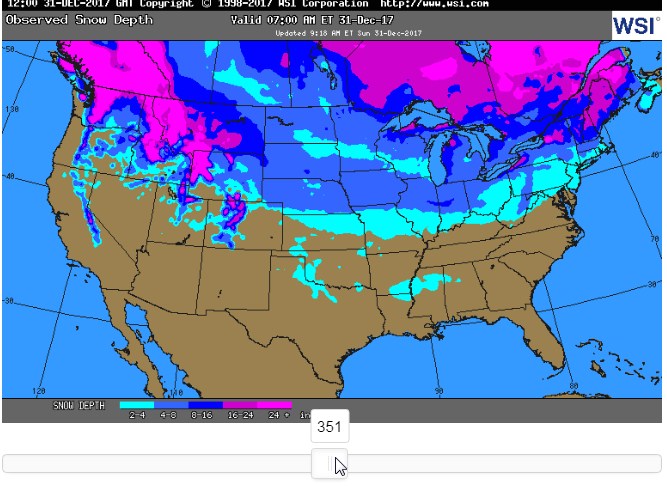 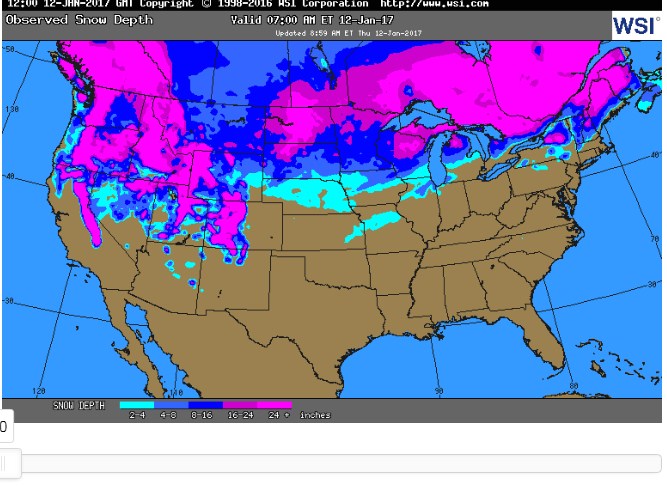 The snowpack built over December but is nowhere close to that big 2017, yet the water year is relatively young still. 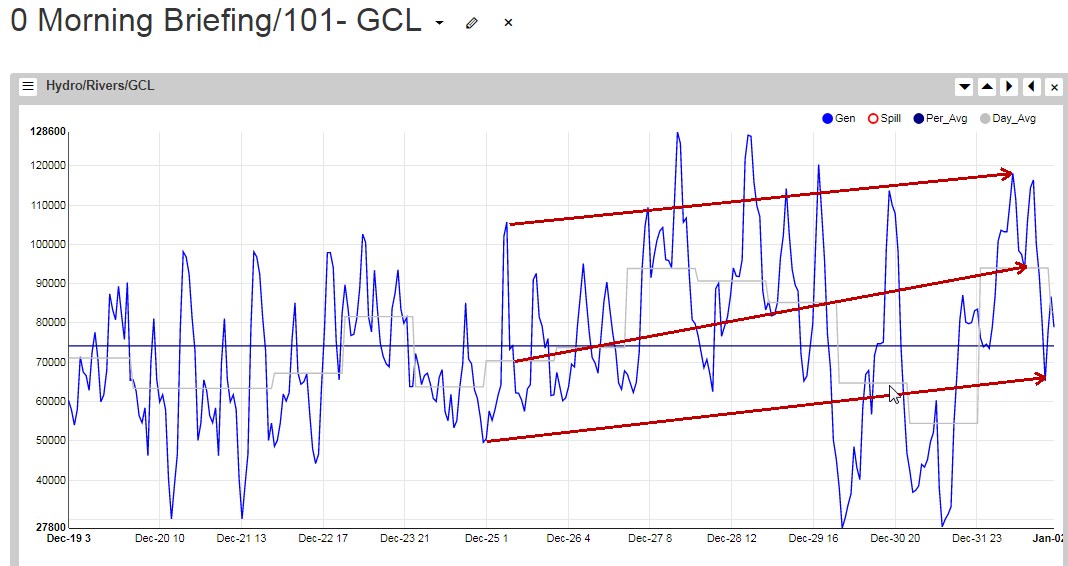 Flows through Coulee’s turbines are up, week-on-week.

Some of the new-found water can be explained by increased inflows, most of those are regulated. They are about to get more regulated, next week the Corps of Engineers will release its first Flood Control guidance (is the Corps impacted by the Federal shutdown?). Here is our early bird on that release: 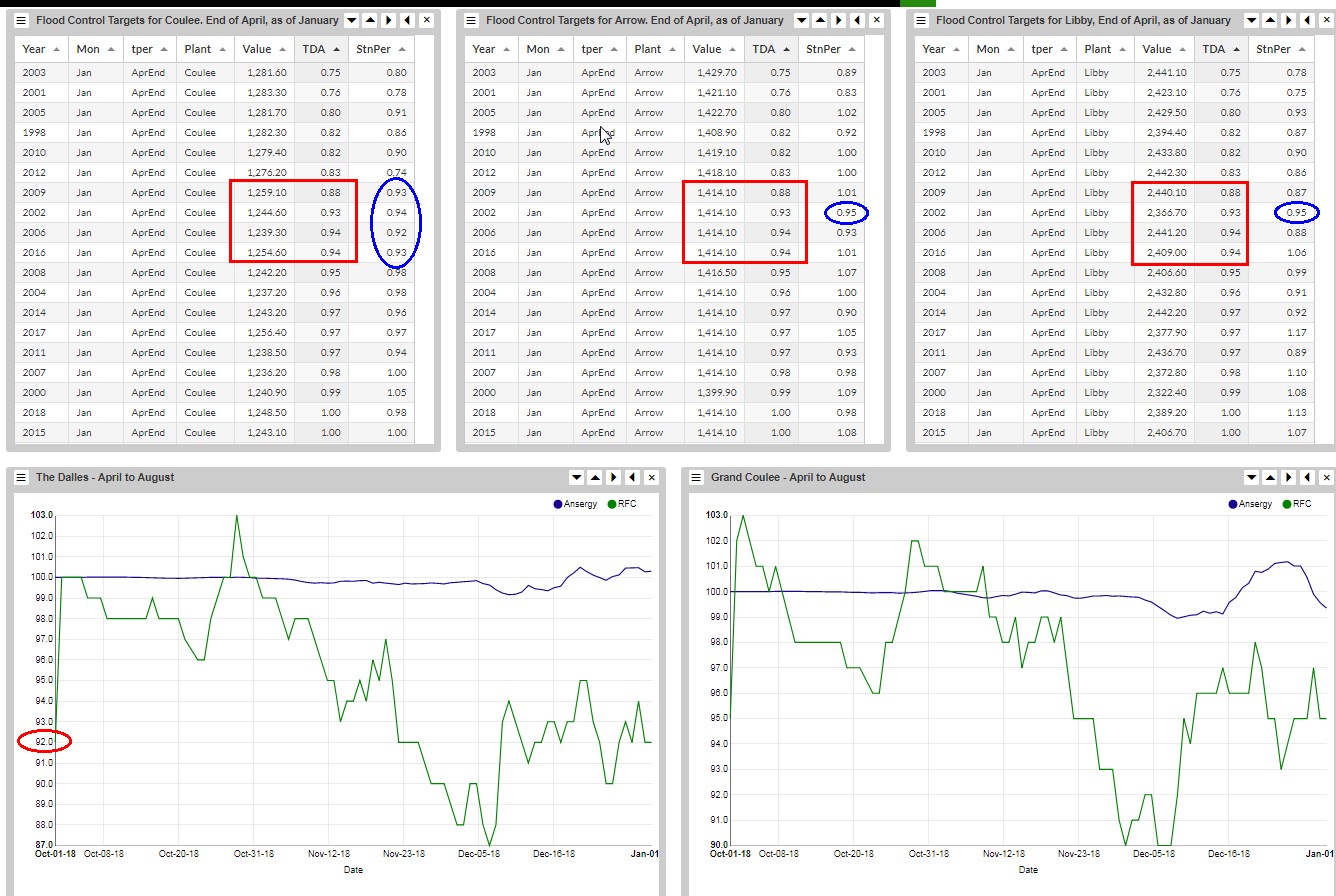 The NWRFC’s current TDA Apr-Aug water supply forecast is 92%; using that and comparing to the last 20 years (See tables) we can surmise the Coulee draft will range between 1244 and 1258. That range also puts drum gate work in play, we haven’t heard any news on that, have you?

One certain bullish item is reservoir levels – these are all off, in aggregate, when compared to last year. The Coulee deficit is narrowing as averages are falling and the project is not drafting. BC remains well below average but has a big snowpack building. 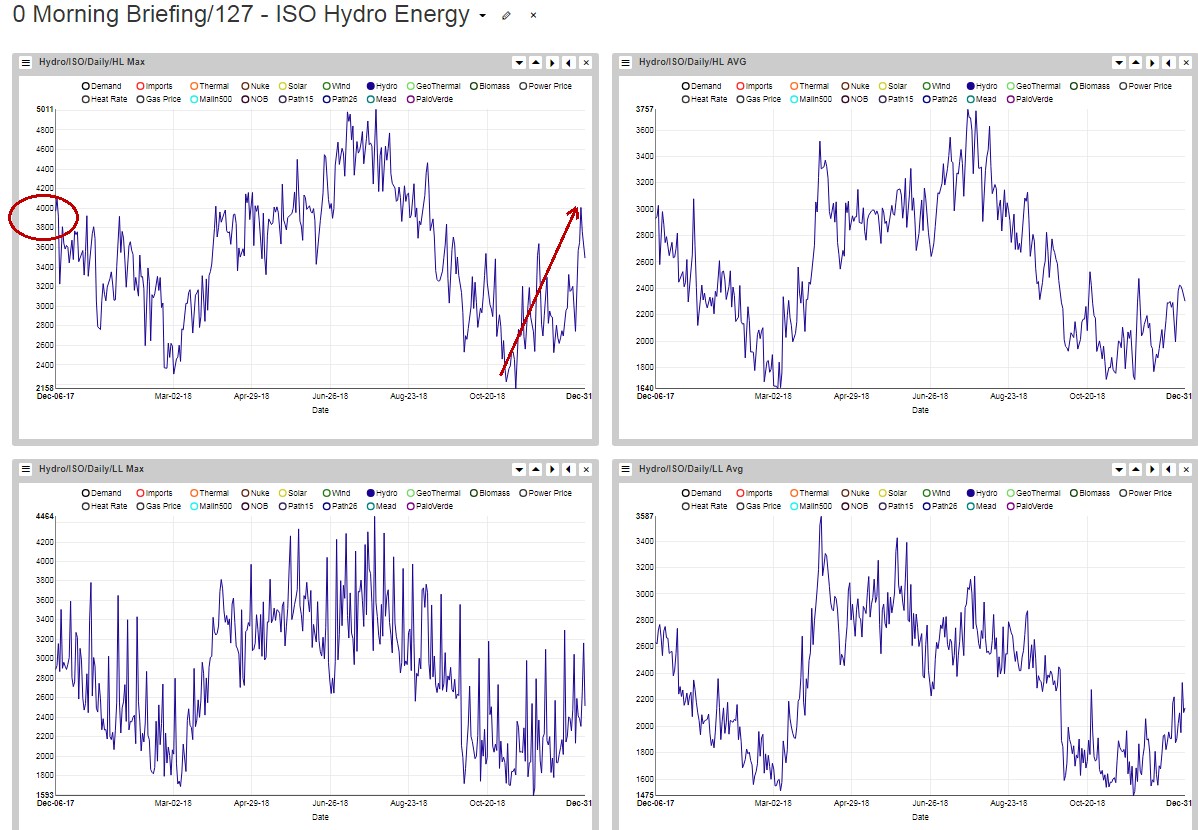 Check out peak HL hydro energy in the ISO; this has soared from the end of summer and hit 4000 MWs a few days earlier. 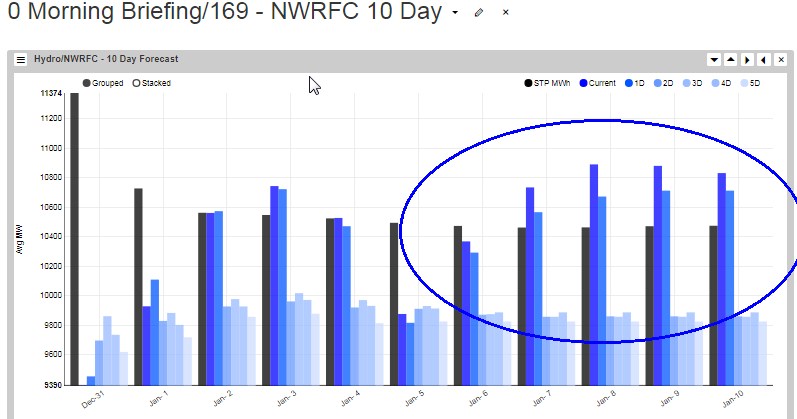 The NWRFC has revised its forecasts from last week; those were ridiculously low, and now is projecting energy builds over last week’s STP. Our take is that the entire 120-day forecast is too low, we’d expect big builds across all months.

Take note of the change on Monday in the AC’s TTC – this is an extended derate to 3100 for nearly two months. Another bearish nail in the MidC coffin.

BC exported to MidC yesterday; this followed a week of strong buying. Perhaps that dearth of wind is the explanation? Maybe BC is just MidC’s wind battery? Something was tight at MidC, the DC actually flowed north for an hour, and the AC didn’t come close to TTC for the entire day. Palo cut its exports to the ISO, probably angry over the hefty congestion charges for its dirty energy.

Bearish. One word to say it all; there is nothing in the fundies that I saw to make one want to get long. Well, let me caveat that last thought by saying nothing but the market. I guess if prices are low enough, why not buy? More on that in the next post.