While the Easter-half of the country looks like they will be basking in a warmer than normal Christmas, the WECC is set for another cool down, especially the Great Basin and the Sierra Nevada.  The week following Christmas may be even cooler as the blue blog on Winter flows north into Mid-C to ring in the New Year.

Look for heavy precip stretching from the Southern Cascades to the Eastern edge of the Rockies as we move toward Christmas.  The rest of the west projects a wetter than normal precip total in over days 6-10, while the latter half of the forecast could revert to normal.  The real question is whether this precip will coincide with cool enough temps to make a noticeable impact on snowpack.

SP-PV DA prices have both come off considerably over the past week and are both showing similar peaks as well.  The 17th had a difference of just $3 at $74 and $71 respectively.  SP-NP showed a similar relationship with the same $74 and $71 prices on the 17th, though NP has fallen off a bit since. 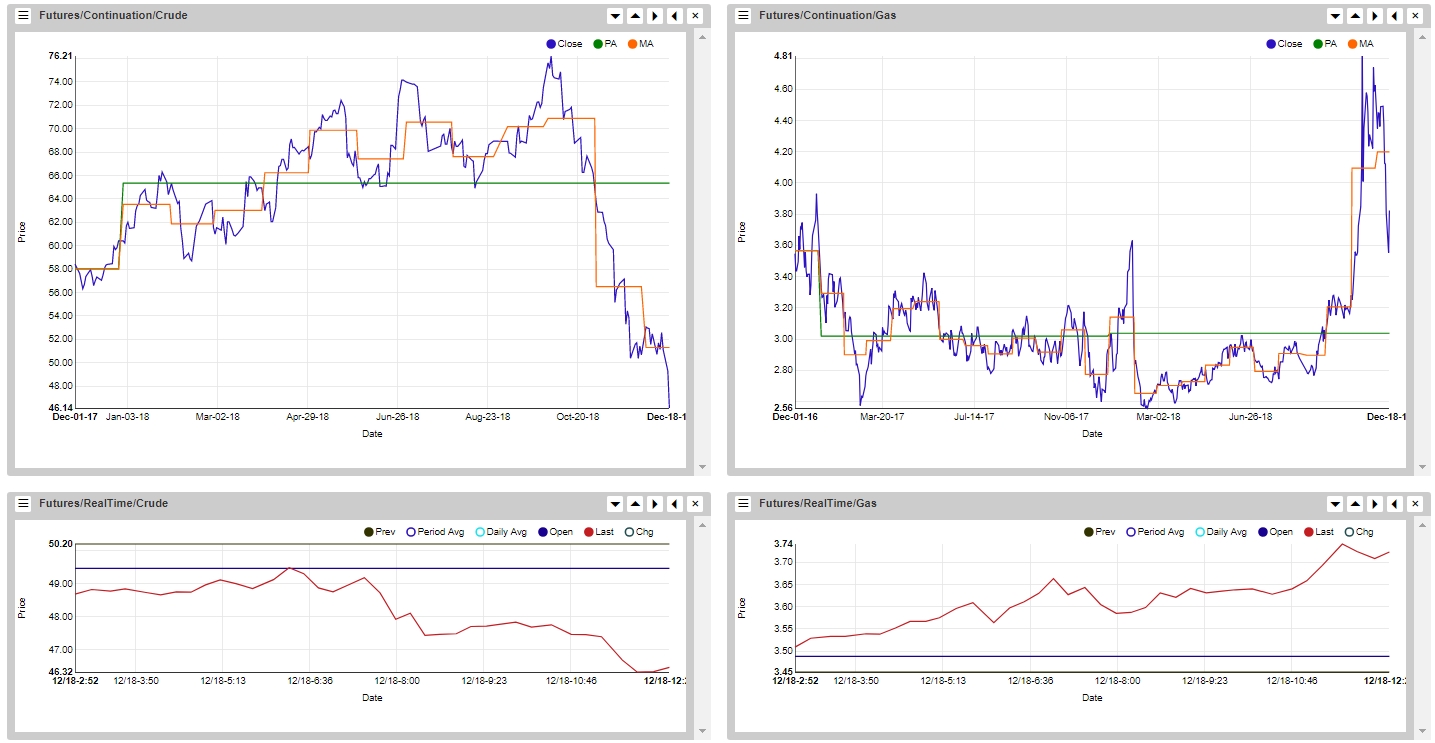 Crude is desperately searching for its floor as it dropped another $2.20 yesterday and is now marking consecutive days under $50.  Crude managed a $1.00 gain by mid-day but that quickly evaporated as prices fell more than $3.00 in just a few hours.

How low can it go?  January Sumas dropped $1.24 week-on-week and $0.55 day-on-day.  A mild start to the winter isn’t helping prices and without a significant cooldown in the forecast, that may not change significantly.

February had an even more dramatic change (at least in terms of percentages) as prices fell $1.11 week-on-week, or 23%.

Citygate is in the midst of its own freefall with prices dropping more than $2.50 week-on-week for January and $1.45 for February. 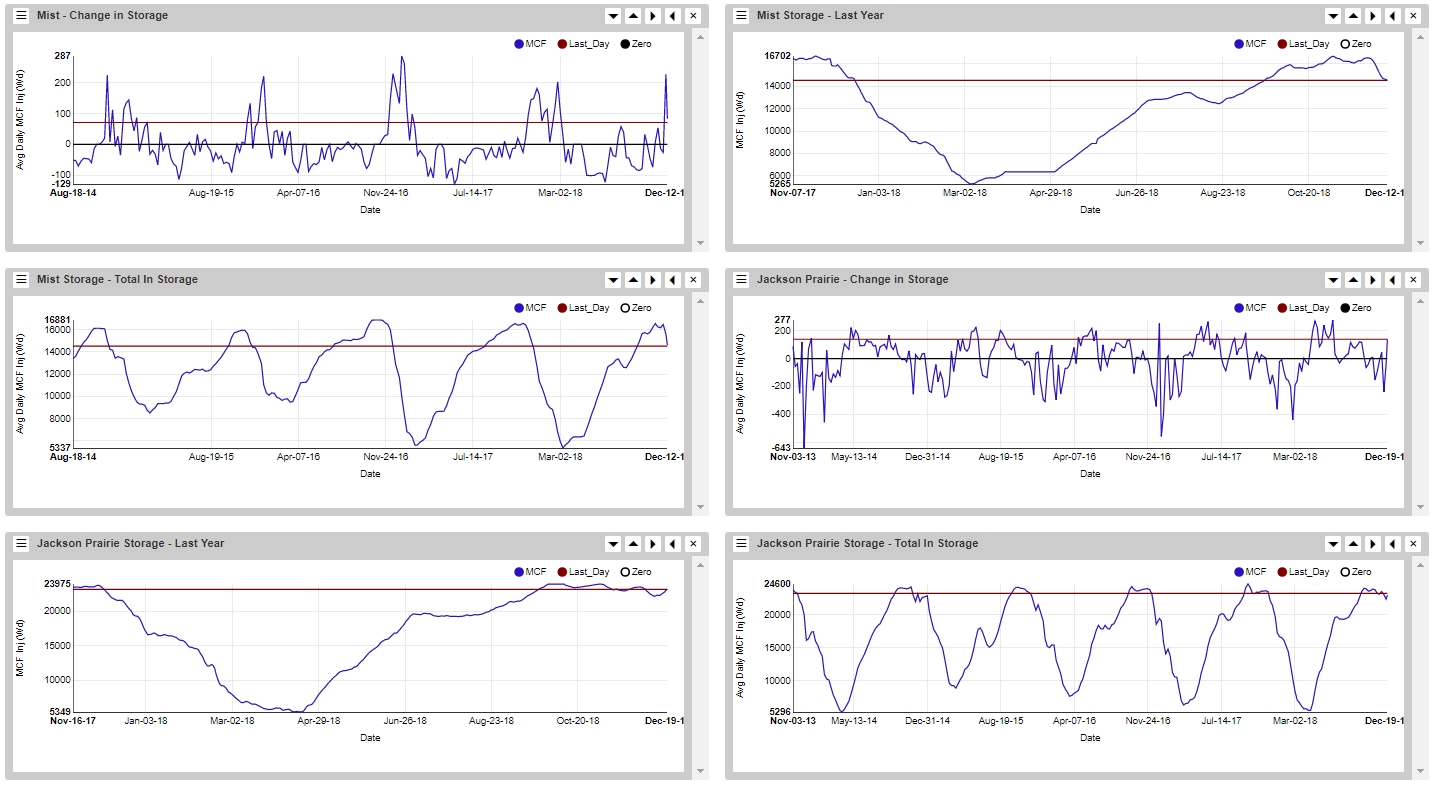 It was mentioned in chat last night, but with Jackson Prairie’s 139 MMCF injection yesterday, the site topped any single-day injection from all of last winter.  Total storage is more than 1,400 MMCF higher than each of the last three years on the same date and roughly equivalent to what we saw in 2014. 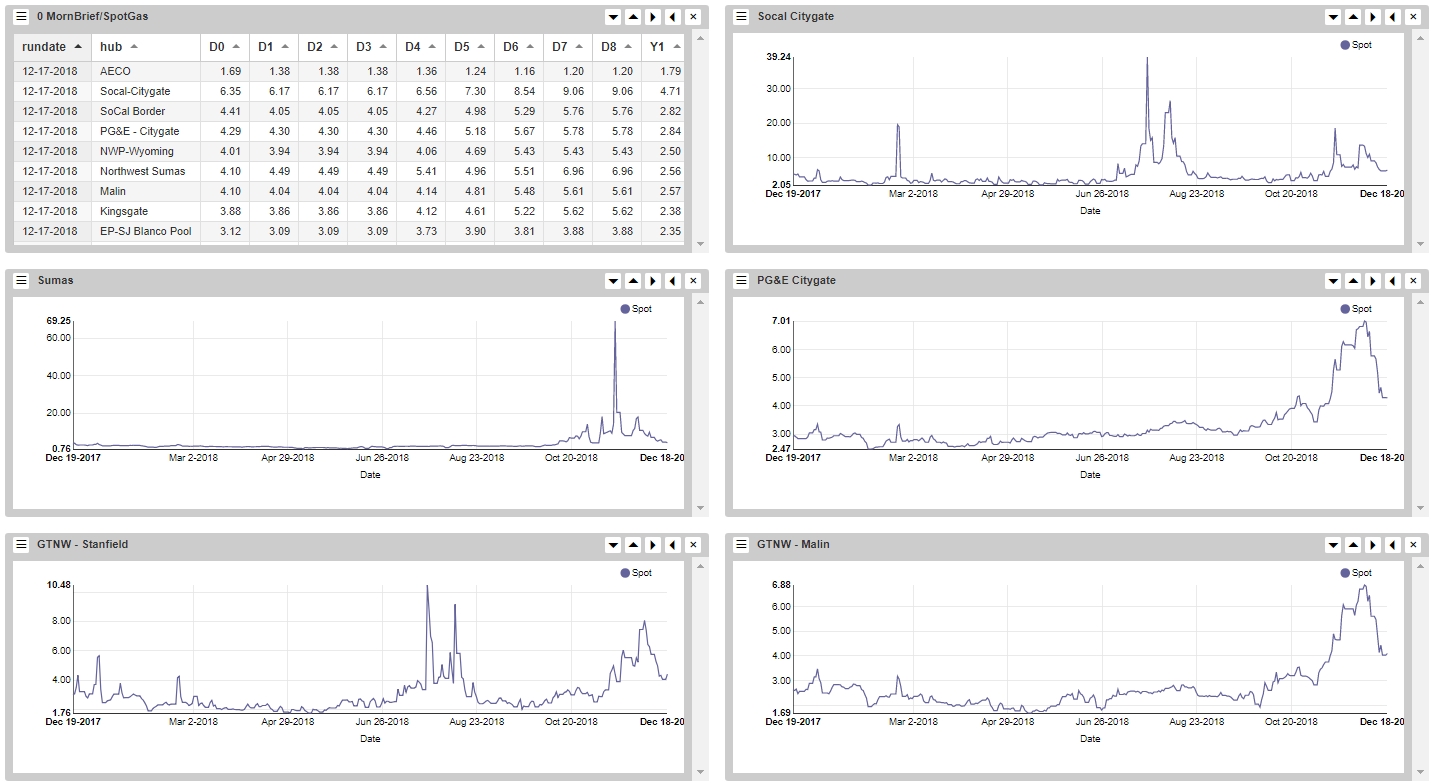 Sumas spot fell $0.39 day-on-day yesterday, relatively mild to what we saw last week, but still a significant drop.  AECO was the big mover in the other direction as it added $0.31 to its price after finishing at $1.69. 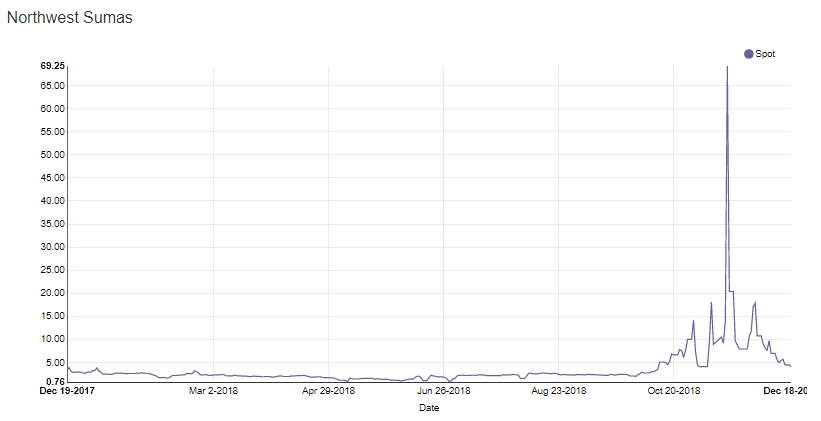 Sumas spot has nearly returned to a pre-explosion price. 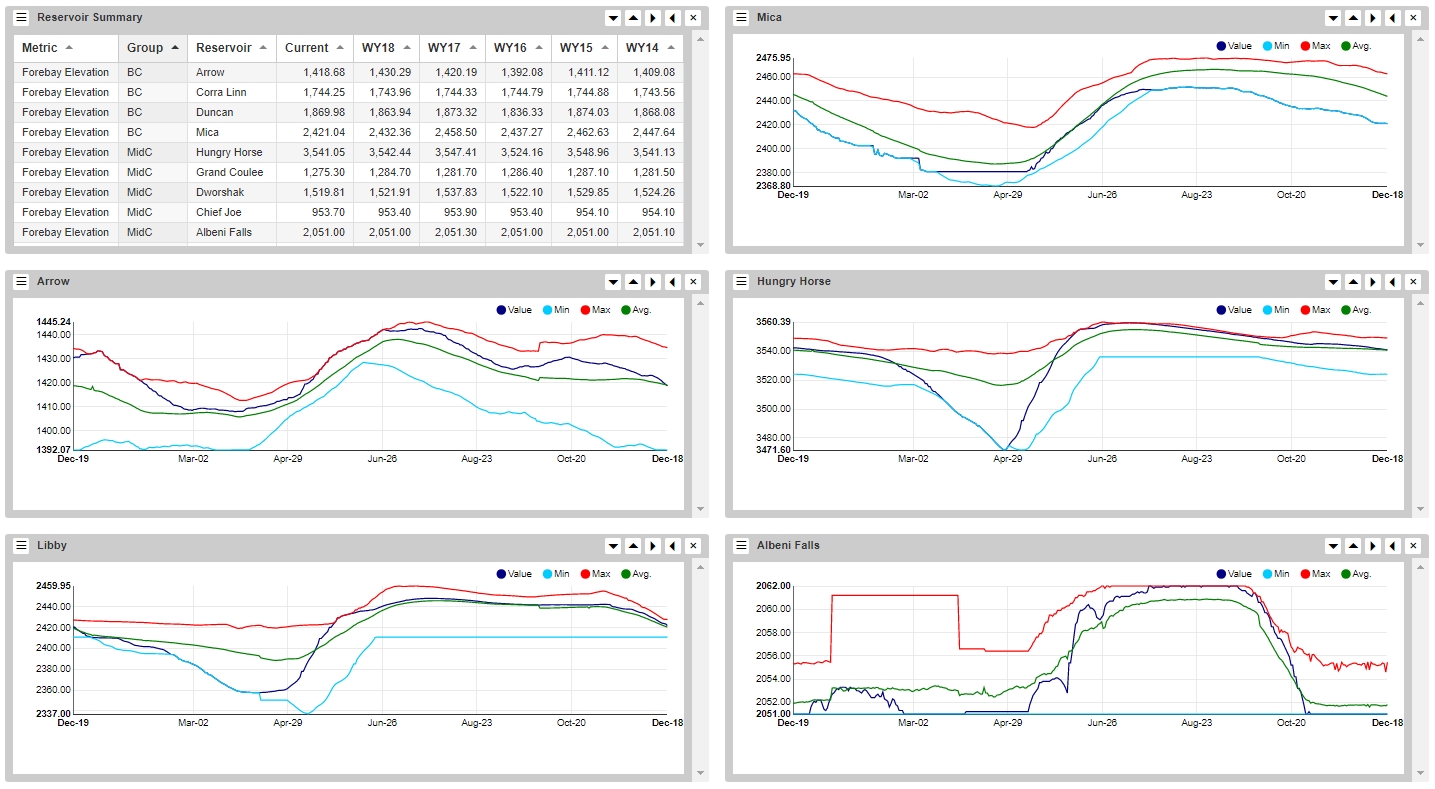 Arrow has shed roughly 4.5′ since the 9th and has dropped below average for the first time in over a year.  The reservoir is now 12′ lower than it was on the same date last year.

Hungry Horse dropped below the average line for the first time since May, though its decrease is much more gradual than Arrow.  Hungry Horse is only a foot lower than it was last year, not quite the anomaly that we see in Arrow.

While most of the low-level snow has melted (thanks to warm temps and rain), the higher elevated mountains were just cold enough to add significant snowpack.  The Cascades were able to cross the 50% of normal barrier while the Idaho and Montana Rockies are approaching 80% territory.  We could see normal levels approaching soon if the forecasted precip manages to hold true this week. 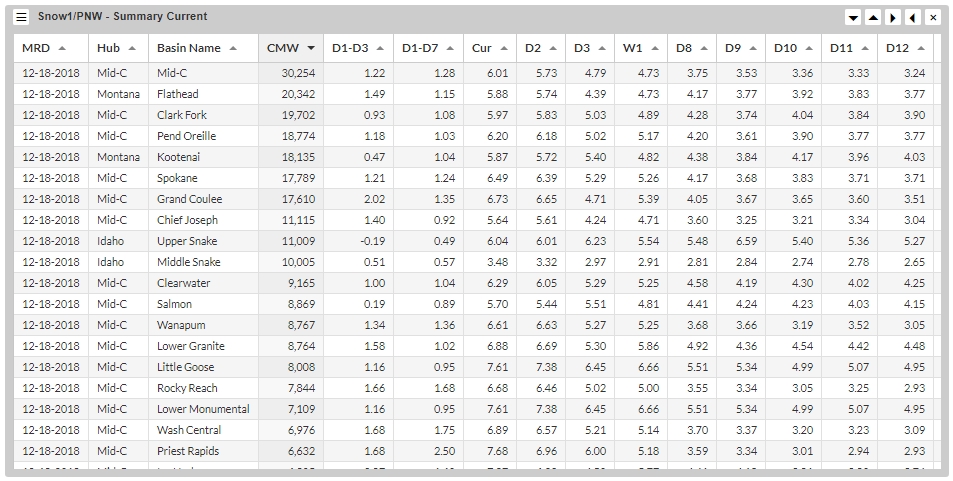 Wash West and Priest Rapids checked in with the largest week-on-week increase — each with over 2.5″.  Looking closer at the columns you may notice the totals fluctuating daily, showing how fragile the freezing level has been in these Mid-C storms.

Mid-C as an aggregate added 1.2″ over the past week.

Grand Coulee added enough snowpack over the past week to briefly cross 2018, though a warm day was enough to wipe out most gains.  Just to illustrate how an early-season lack of snowfall isn’t a harbinger of the rest of winter, I’ve added 2010 to the chart.  Notice as of today, 2010 would be leading both 2019 and 2018. 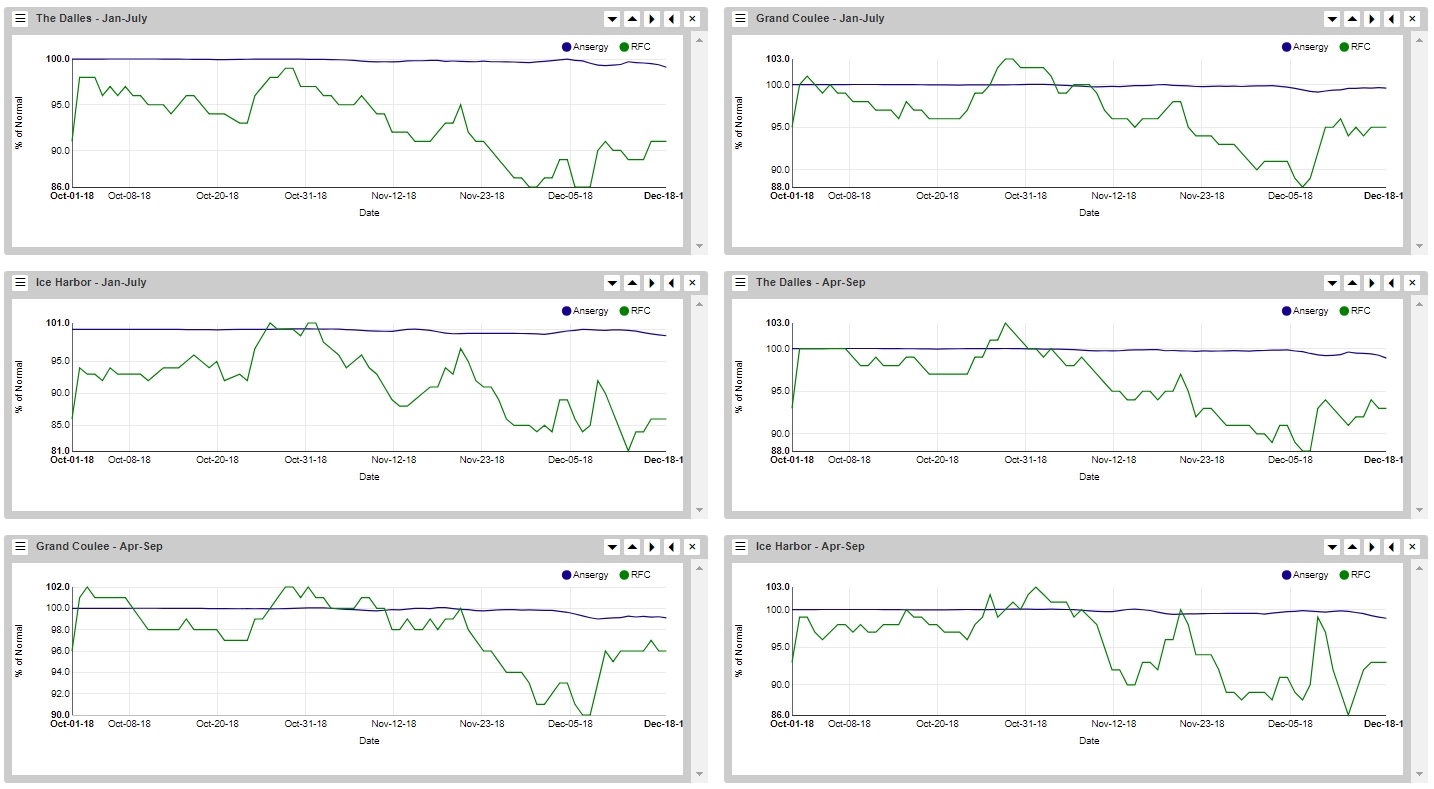 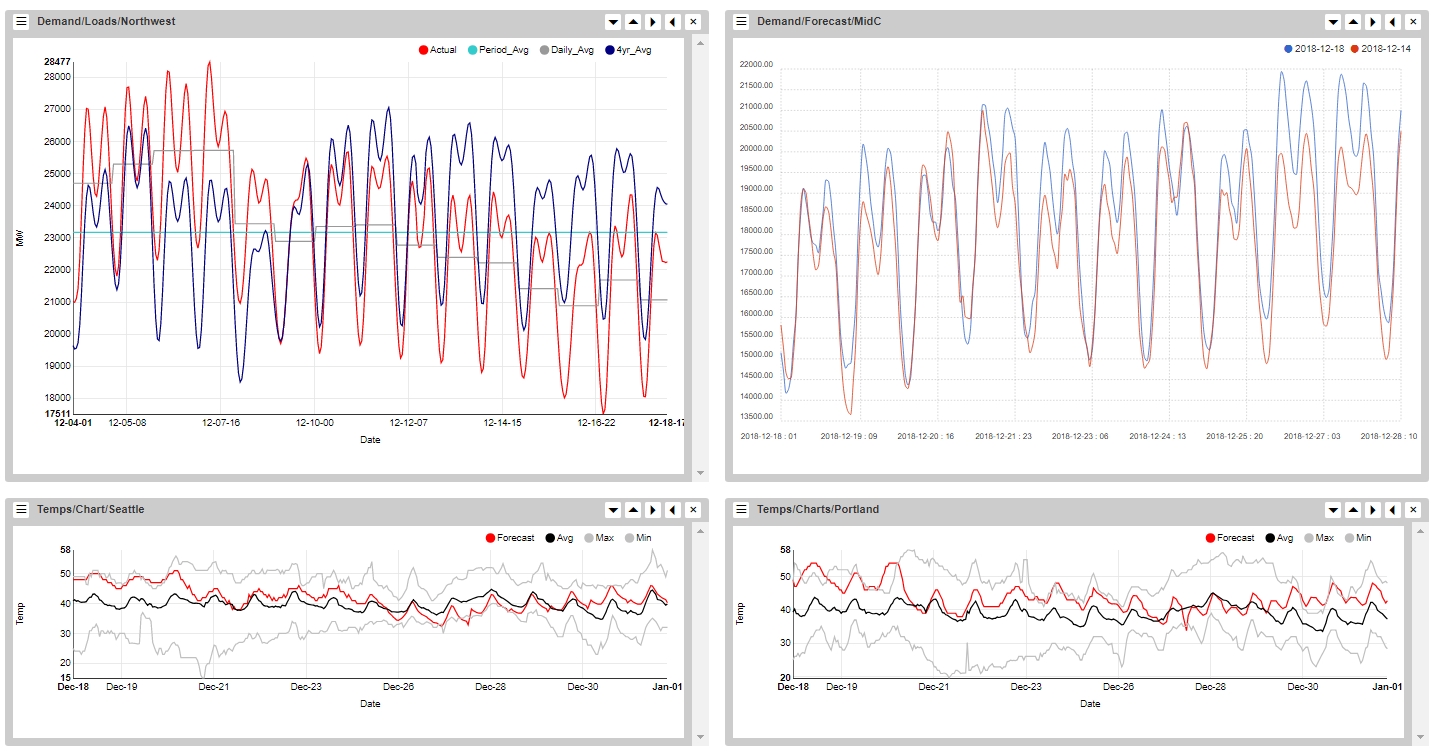 Christmas should mark the end of consistent above-normal hourly temps for Seattle, but until then we could see a variance of up to 8 degrees on the 10th with a balmy high of 51.  There isn’t a single hour of freezing temps in the current forecast.

Not surprisingly, Portland will be even warmer as the 20th shows a high of 54, ten degrees above normal.  Temps fail to drop below freezing in Portland as well.

Loads were off close to 200 MW yesterday and were down more than 2,000 MW week-on-week as mild temps blanketed the Northwest. 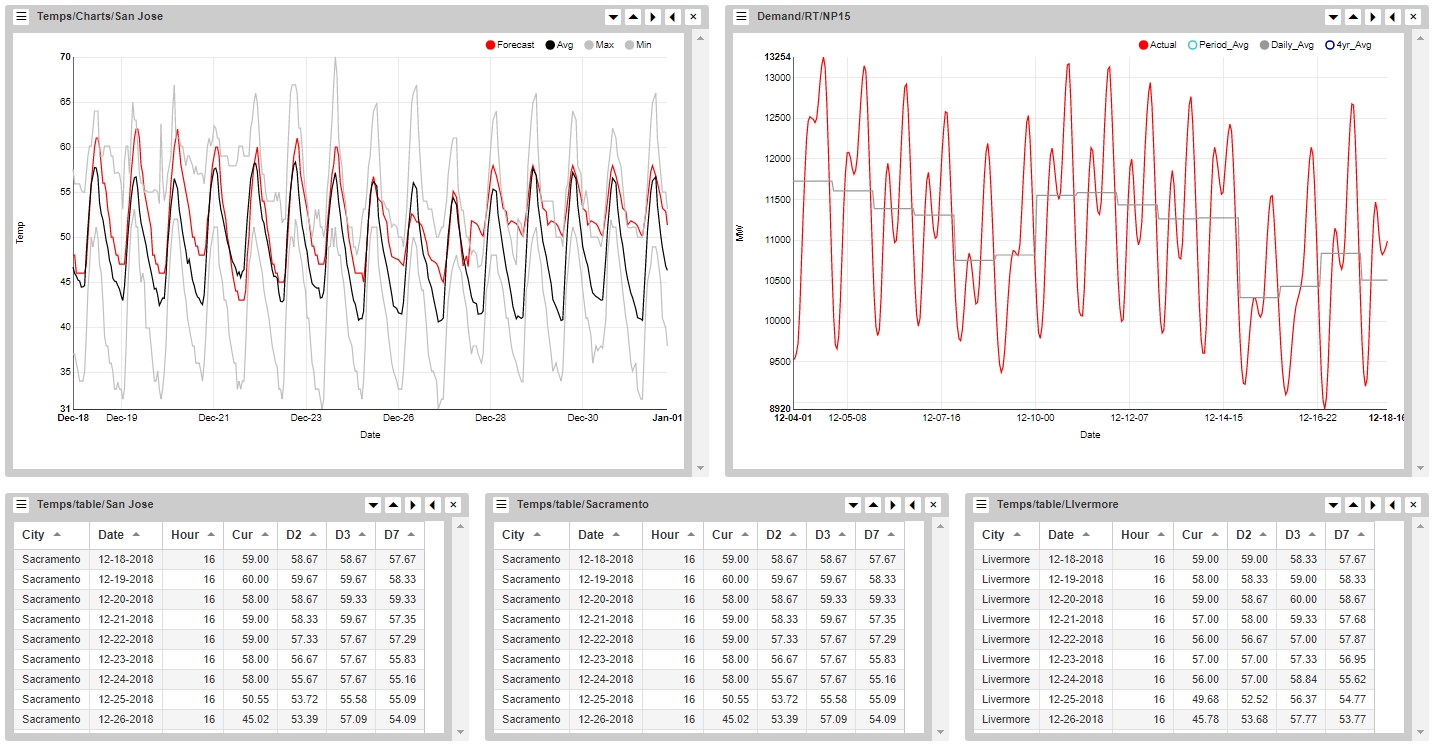 NP peak demand was up slightly yesterday compared to Monday but remained well below last week.  With mild temps in store for San Jose (highs in the 60’s through the 24th, and nightly lows consistently above 45), loads may stay in this range for another week at least.

Sacramento is holding onto several highs in the 60’s as well, though one day over the next 14 managed a sub-40 forecasted low. 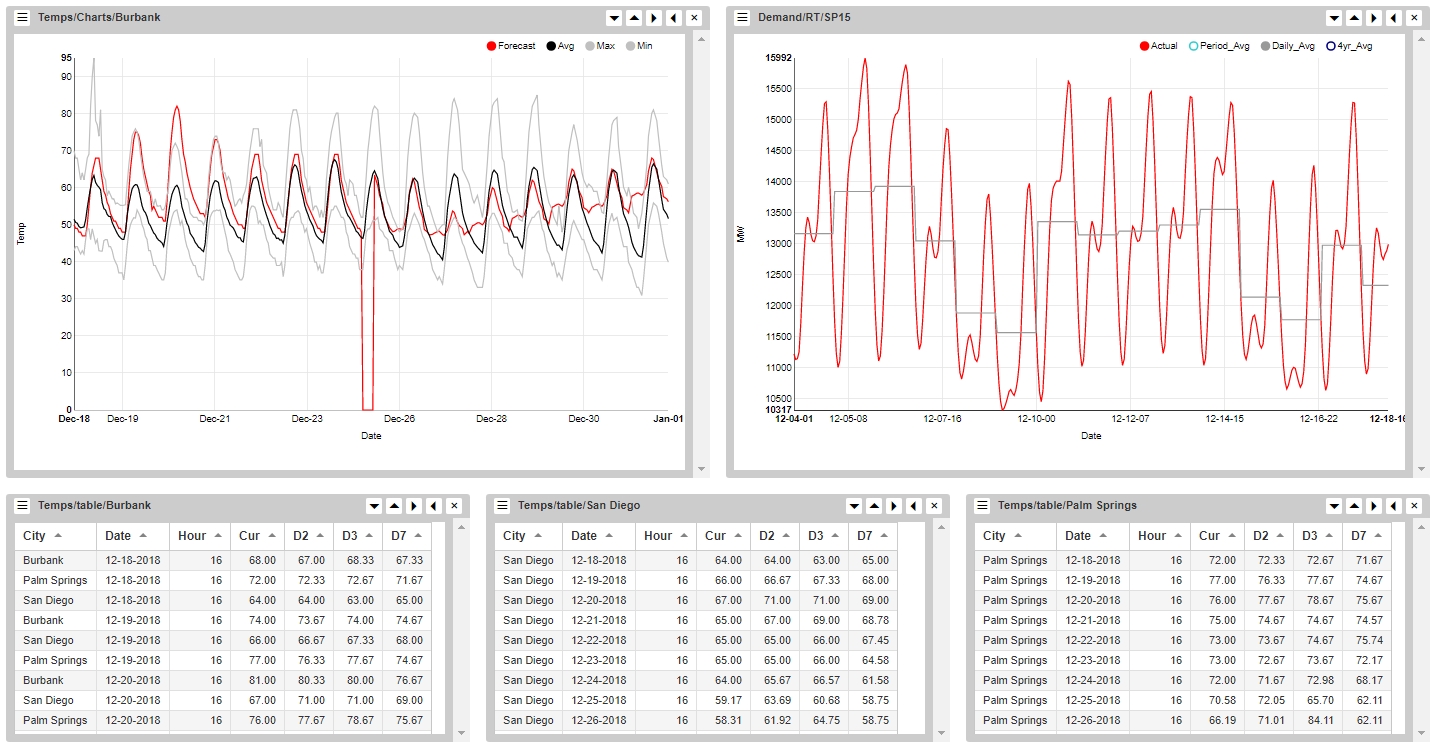 SP peak demand was mostly flat yesterday, maybe increasing 50 MW day-on-day.  There wasn’t much of a difference week-on-week either as just 100 MW made up the difference by most measurements.

All eyes are on Burbank’s impressive high of 82 on the 20th, 21 degrees above the previous 10-year high.  With lows in the 50’s, there isn’t much to drive demand this week.

The deserts are slightly cooler but are still forecasting highs in the upper-70’s through Christmas.

Phoenix is projecting highs in the 70’s through the 24th before temps drop off a cliff, bringing a high of just 55 on the 26th.  Despite daily highs dropping next week, lows are above normal in most cases as temps fail to fall below the high-40s. 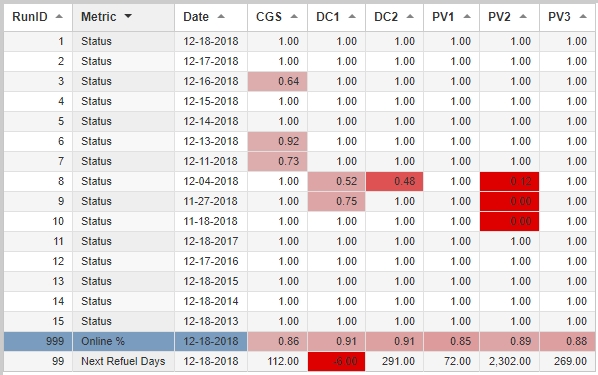 With CGS back at 100%, all six nukes are generating at 100% capacity once again.

Mid-C wind was back above 1,000 MW yesterday after being mired in some slow generation days since the 15th.  Still a far cry from the 2,600 MW hourly peak we saw on the 12th.

ISO Gas outages was up 300 MW yesterday, reaching a total of 3,811 MW.  Despite the day-on-day increase, total outages are still 1,600 MW short of the total from last Friday.

Mountainview Gen Sta. Unit 4 was the main culprit for the outage increase though several other stations also contributed.

COI marked two more changes this week as TTC runs 250 MW lower through 6 AM tomorrow.  Also note the large increase beginning on the 29th at 10 AM where TTC moves from 3,840 MW to 4,550 MW through the remainder of the Forecast.

NOB remains unchanged in the most recent projections.