Increases across the board this week, albeit relatively modest in most cases.  December followed up last week’s addition with another 340 aMW tacked onto the forecast.  January had an almost equal 368 aMW increase, ending a two-week slide in the process.  February added 418 aMW and prevented the fourth-consecutive weekly decline in forecast.  March added a small 247 aMW jump to round out this week’s update.

APRIL NOTE: Though we only have data through the 16th, this is material, and bullish, change to that strip’s outlook – a cut of 2 gigs. We are less confident in their confidence; it’s so early in the water year to be making such drastic and draconian changes, especially in the face of the massive storm system that has already landed and will continue to pound the Northwest for another week.

December falls as far as 1,000 aMW behind last week’s forecast as of the 23rd, but make an even larger jump thereafter, climbing up to 1,400 aMW higher by the 26th.  January begins the month a few steps behind before maintaining a 500-700 aMW increase going into March, which, coincidentally, holds a similar pattern through the month as well.  April shows a massive drop to begin the month — 2,800 aMW as of the 3rd, though that tapers toward the end of the forecast. 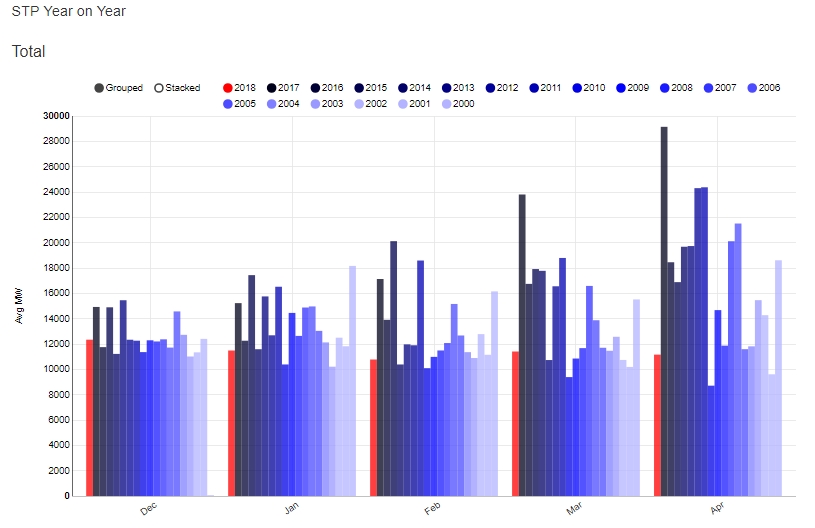 This week’s update showed enough in the way of increases to at least look worth of being displayed on the same chart…save for April which fell further behind every year aside from 2010 and 2001.  With only half the month forecasted, it’s possible April could still see significant changes over the next couple weeks.