It feels like the markets could turn if only they’d get some help from Mother Nature. Where we were all raging bulls with visions of blackouts blanketing the Northwest and LA, now no one owns anything, and the markets keep sliding. 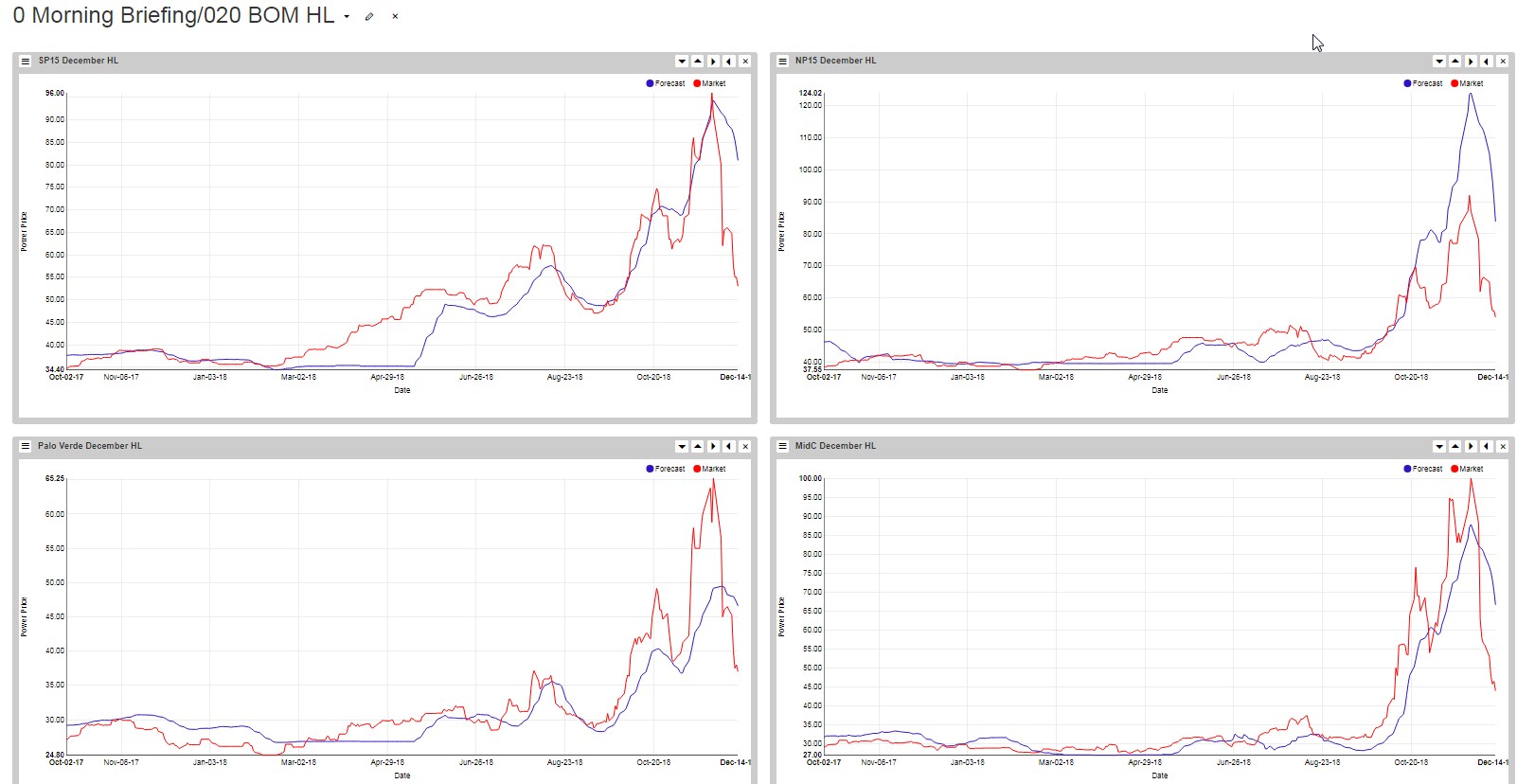 BOM Power is a freefall, a death spiral to zero, or is it? If gas firmed up, the pain would dissipate. Will it? Has it?

Socal Citygate looks more tippy-toppy than it did last Monday; back then, the hub looked nearly invincible, now all the prompt bullets pulled back last week. How about Sumas, trainwreck that she is…

The Market hates Sumas, the bleeding hasn’t ended, or at least as of the close on Friday, it wasn’t over. What would turn around the Sumas would be some new bullish news on Westcoast’s pipe – like another cataclysmic explosion of about sixty miles of pipe that would take a California-like three years to repair. Let’s see if that happened over the weekend:

Oh my, just the opposite. Those pesky Canadians fixed the dang pipe; now it is flowing just below last year’s winter levels. No respite here, but maybe our initial savior, Mother Nature, will step up to the plate and lob us a watermelon. 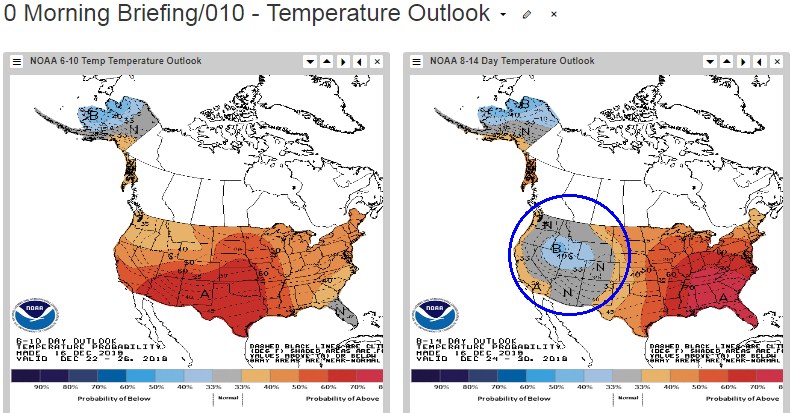 Well, Sunday’s forecast has hints of bullishness; recall last Friday, there was but a tiny circle, a total of about 2.1 square miles, of normal temps somewhere between Utah and Idaho. Now, the entire WECC hinterland is either below average or normal – that is a confirmed bullish change. But the load-center coastal strips  – from SD to SEA – are above normal. Still, the trend is cooler, perhaps that extends and turns these maps dark blue!

Cash is up a bit but more interesting is the flatness of the curve across all LMP nodes – there is like zero congestion anywhere. Free transmission, pay nothing for losses.

The Northwest was cold, so was California, and we bet that cold made a big dent in Jackson Prarie’s storage – right? 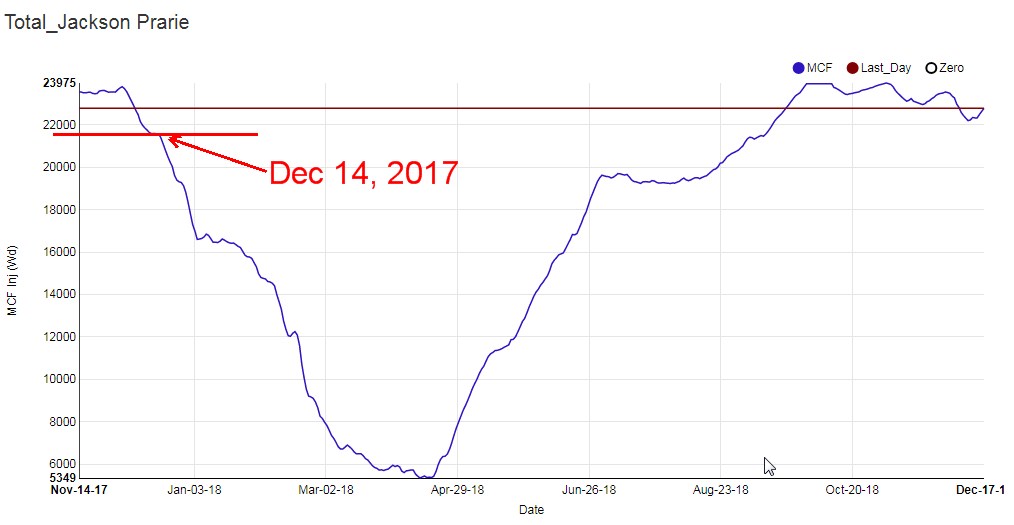 Wrong, storage at JP is above last year’s, same day, levels. How’s that happen when Sumas has been a half a BCF a day lower than last year? Call it the resiliency of BPA and its wards; they quit burning gas at the I-5 turbines, and it wasn’t that cold, loads were never that high, and whatever rally occurred was quashed by a slight ramp-up in hydro.

We love this dashboard, and so should you, as it summarizes everything you need to know about the MidC. The top group is a weekly week-on-week; the bottom is a year-on-year comparison; and the right side is the same for LL. Here’s the same for the ISO:

The ISO’s dashboard is slightly different since it deploys its own data sources. But at a glance, you can see what you need to know. 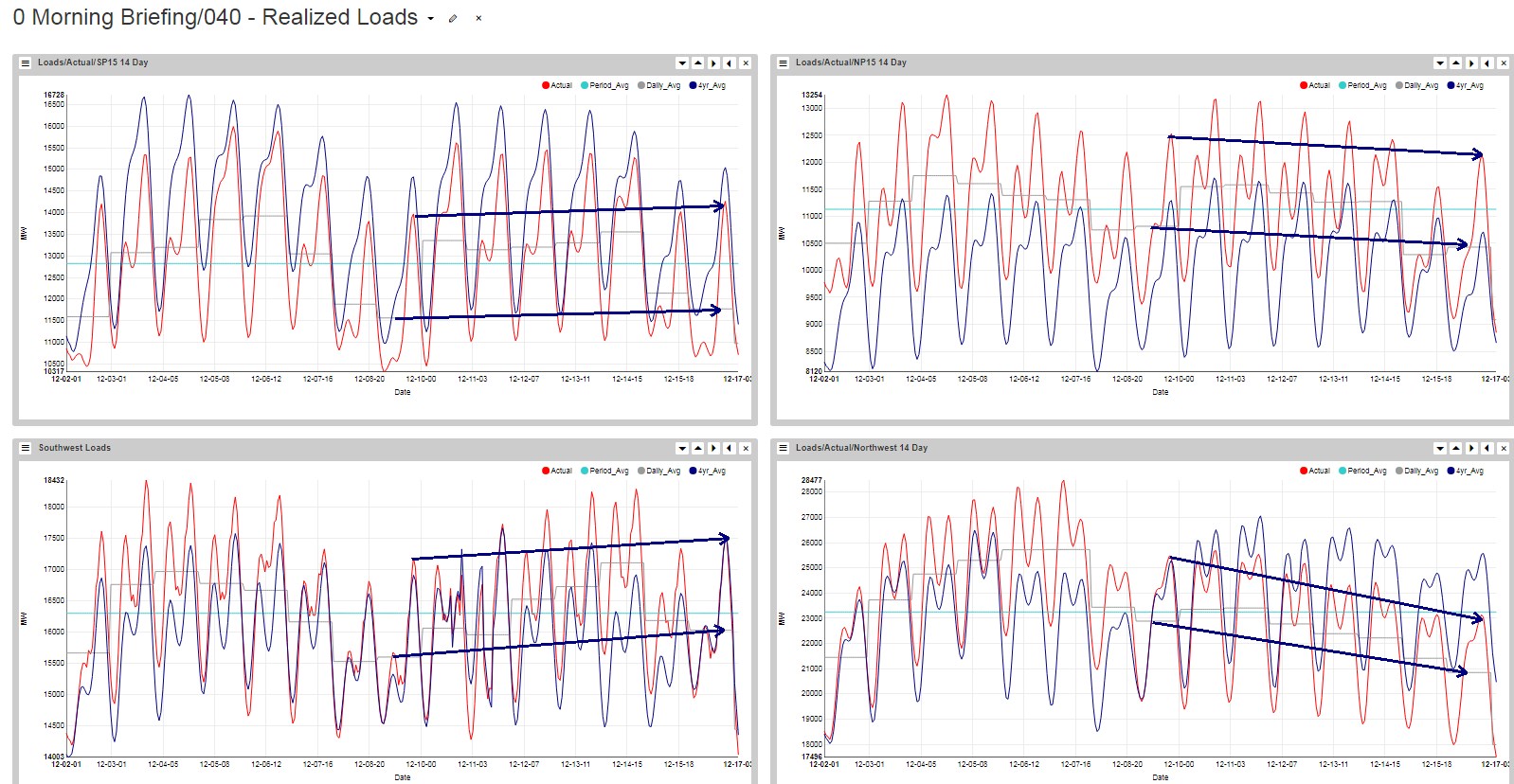 One fundy you already know – MidC Loads cratered, week-on-week, while SP’s are sideways and NP’s are off. Here’s the gas side: 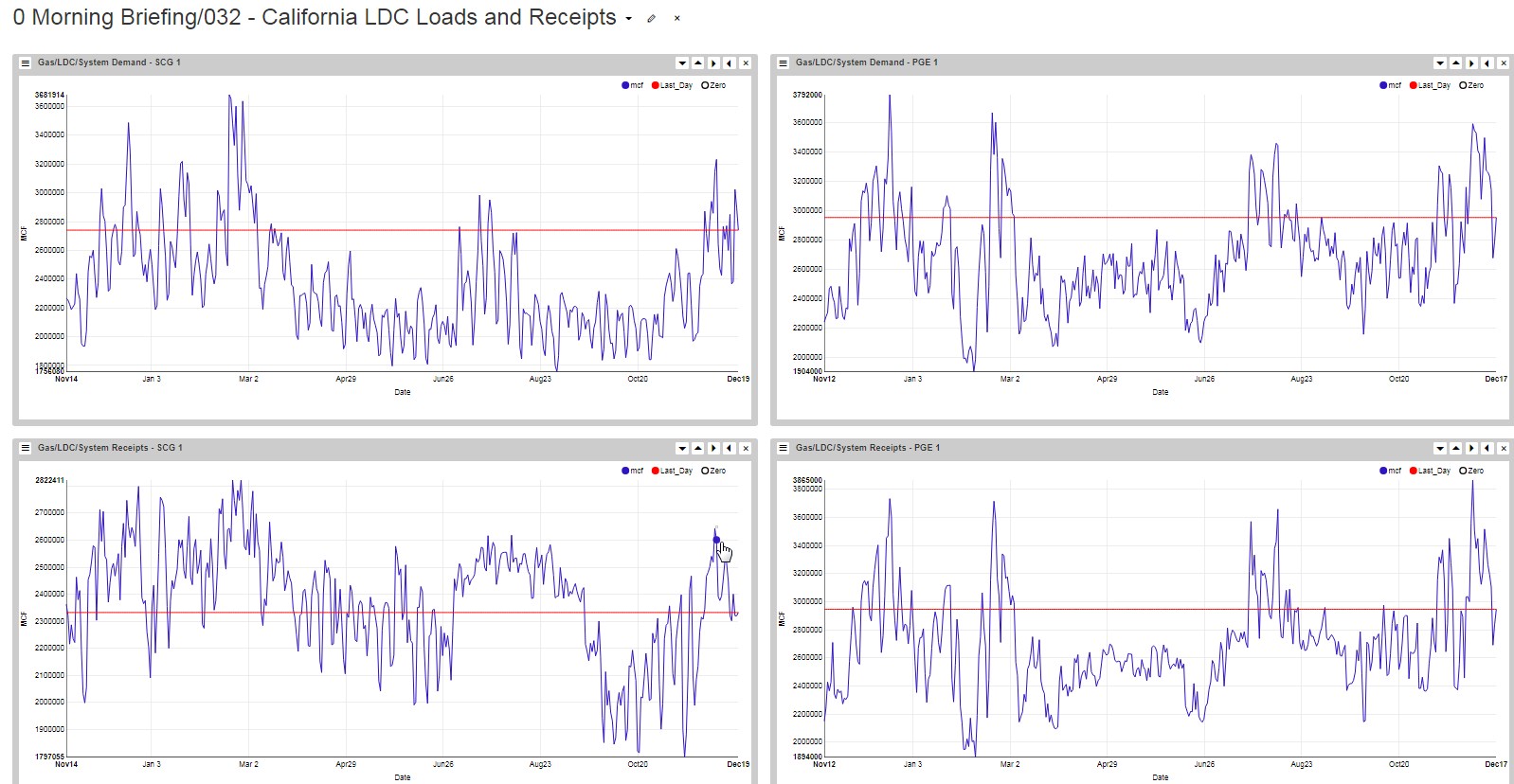 PG&E demand has tanked while Socal’s is sideways; but while PG&E load is off, so are its imports. 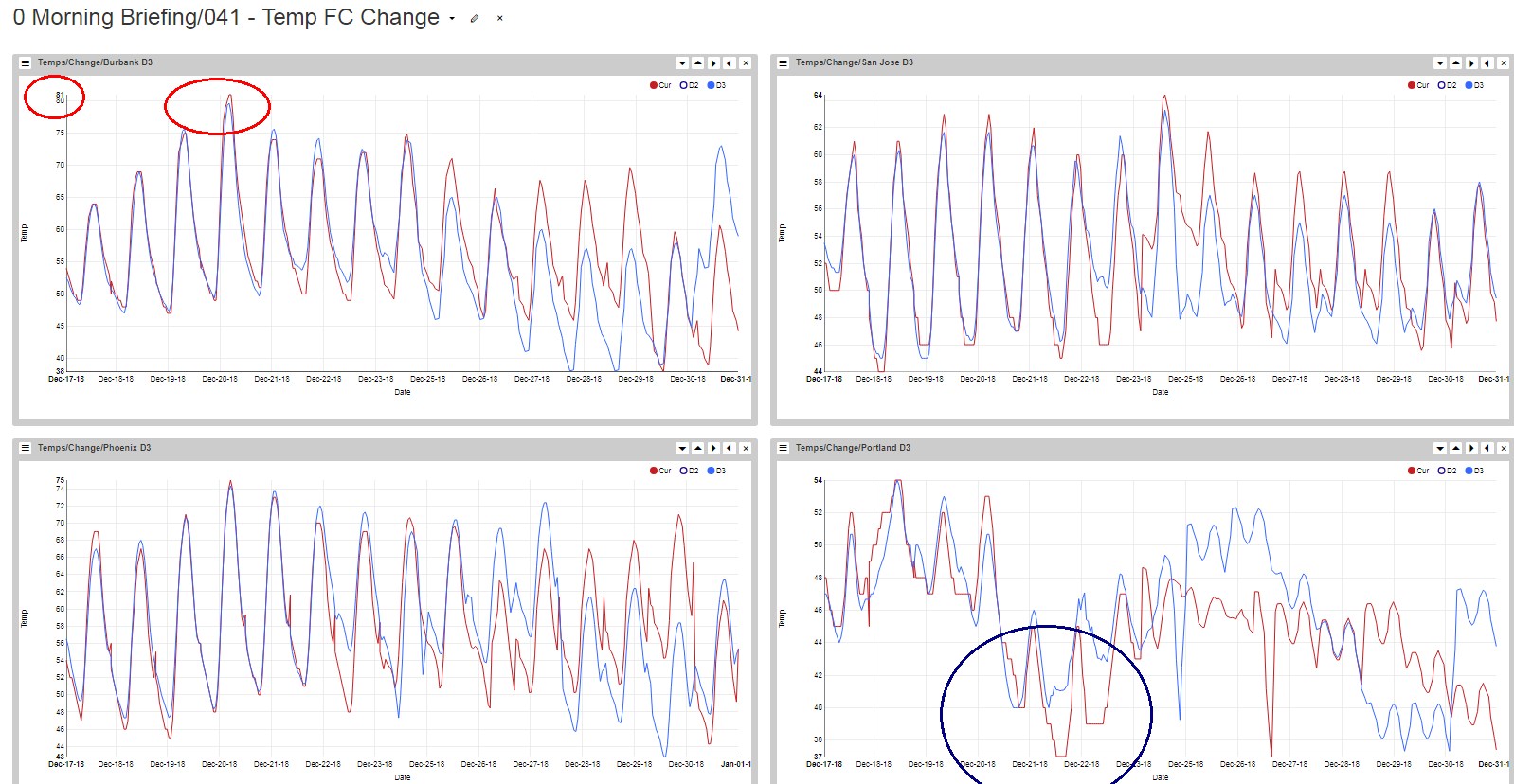 Yet it’s getting colder, right? Not in LA, that land of plenty may hit the 80s this week!. Dust off those AC units and pool-chillers my friends, it’s getting toasty. While LA roasts, check out the changes in temps at Portland, not only are they falling, they are getting colder than three days ago. The trend is the friend and Northwest loads are going to soar by week’s end. 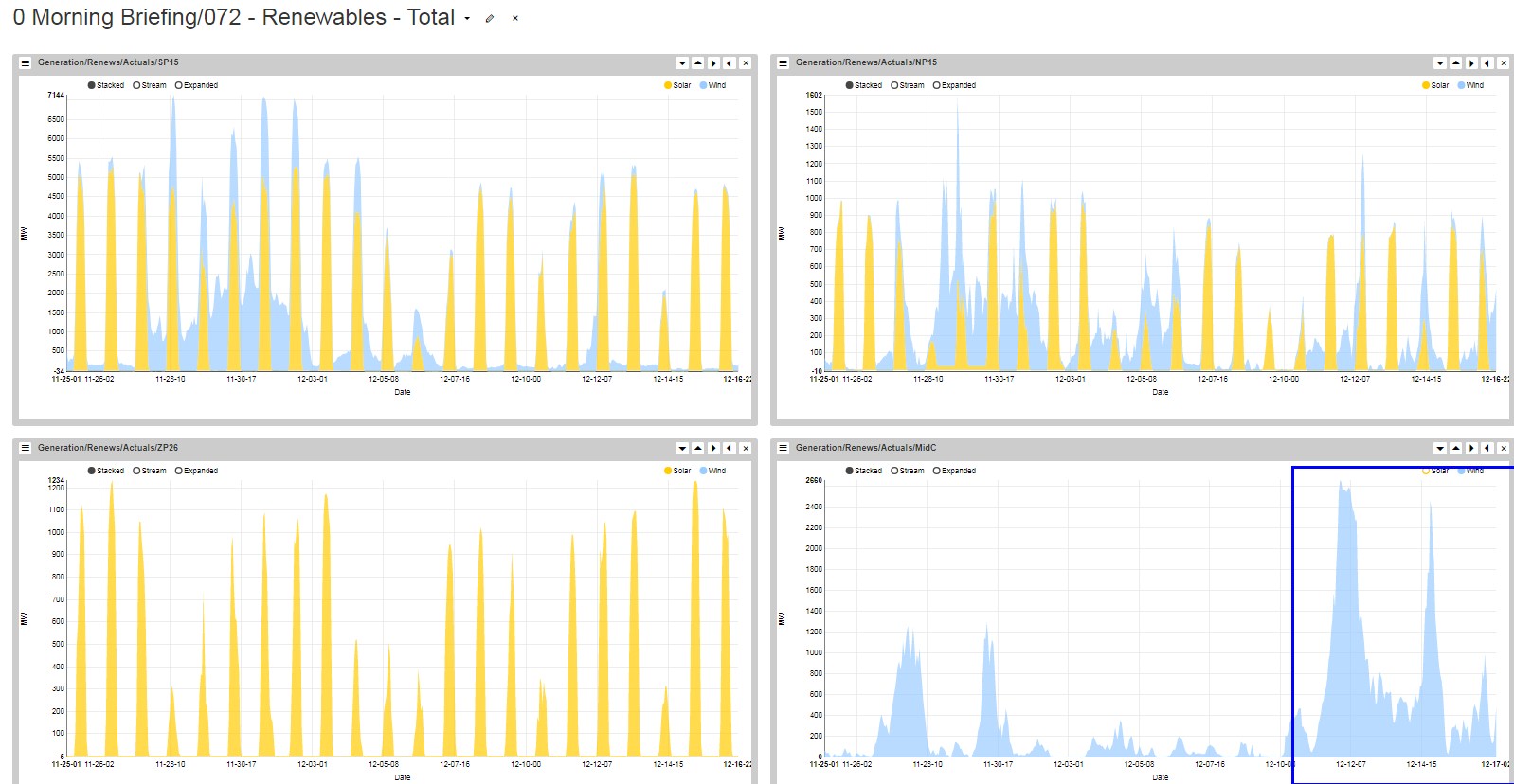 Kally was wet over the weekend, check out those solar haircuts; the Northwest was blustery, Seattle had gusts in the 60s, and BPA was awash in wind energy.

Our water supply forecasts for Cal are mostly just normal to slightly above while the PNW is below average, but not by much.

The precip outlook is above normal across the WECC: 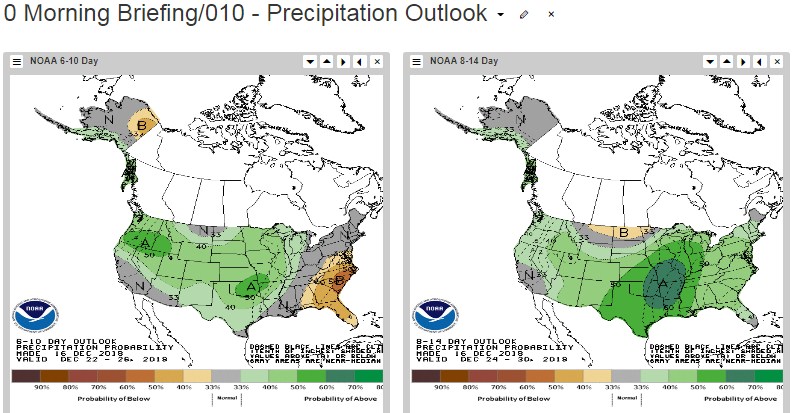 Which should push the NWRFC’s forecasts up, perhaps converging back to Ansergy’s numbers?

Speaking of the RFC, those folks must have gotten back-door long as they just shaved about a gig off of their 10-day. I’d guess this is more a reflection of how warm it is which drives BPA to cut discharge and conserve scarce water molecules. Either that, or it is just random noise? Given that today is STP Monday, you might brace yourself for a BOM haircut.

We see flows out of Coulee dropping following the warm-up; inflows are not rallying fast enough to force more water through the turbines. Instead, water is staying in the reservoir:

Don’t be confused by the “MIN”; the current values are the MIN, and you can see that over the last few days BPA has filled a foot or so.

Flows in BC are mostly up on substantial rain and snow.

The US flows above Coulee are also mostly up, though we see some substantial regulation changes taking place at Libby, Horse, and Lake Pend Oreille. Check out the flows on the Spokane, those just gapped up to nearly 7kcfs, which is approaching hydraulic capacity for most of Avista’s projects.

Some modest changes in BPA’s TTC: the derate at the end of the month is off; now the AC is back to full capacity.

Energy is flowing into Canada from the MidC; that is a gig swing in net energy at MidC; the DC went to zero for a few hours yesterday; flows into the ISO are off at both Palo and Mead.

It’s not easy to call bottoms or tops, but this recent sell-off is feeling tired, to me. The weather is trending colder and prices are cheap, both relative to where they’ve been and just cheap fundamentally – as long as gas quits puking. More on that in the next post.