Another changing of the guard; now we’re seeing drier conditions in both California and the Northwest, though the warm remains in the 6-10 and dissipates (in the NW) in the 8-14 day; though CA stays warm primarily through Christmas. 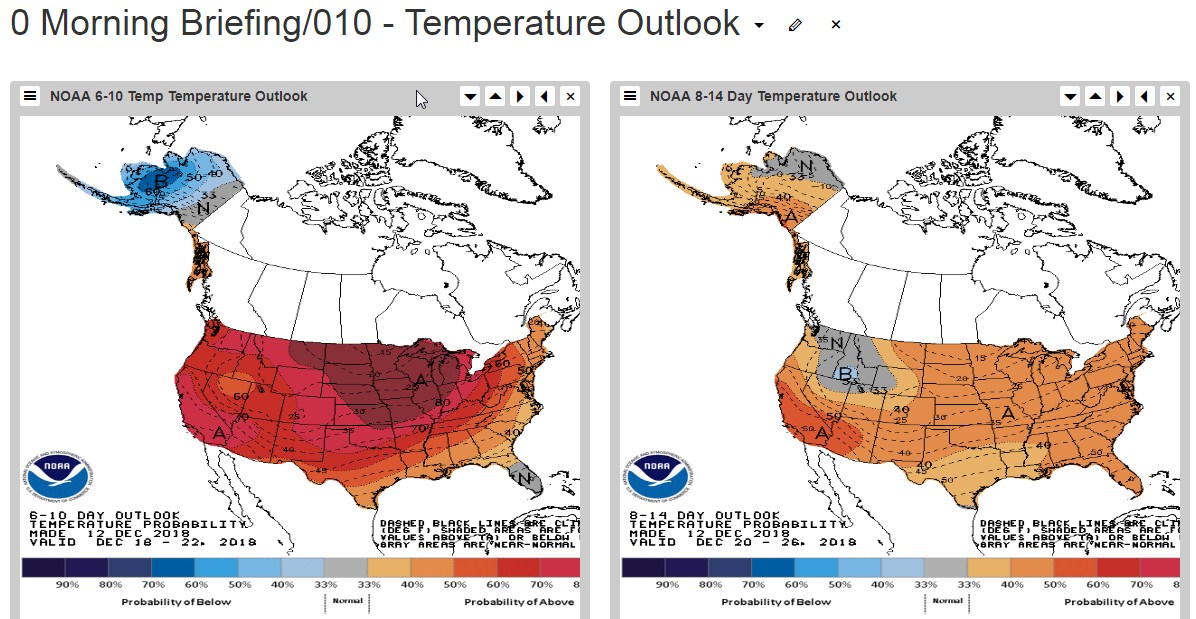 Where yesterday the NW was blanketed by dark green, today it is barely “mint green” in the 6-10 day and just one of those 50 shades of gray in the 8-14. Interesting, the forecast is growing colder – could that trend extend through the weekend and we get another dark blue blob by Monday? 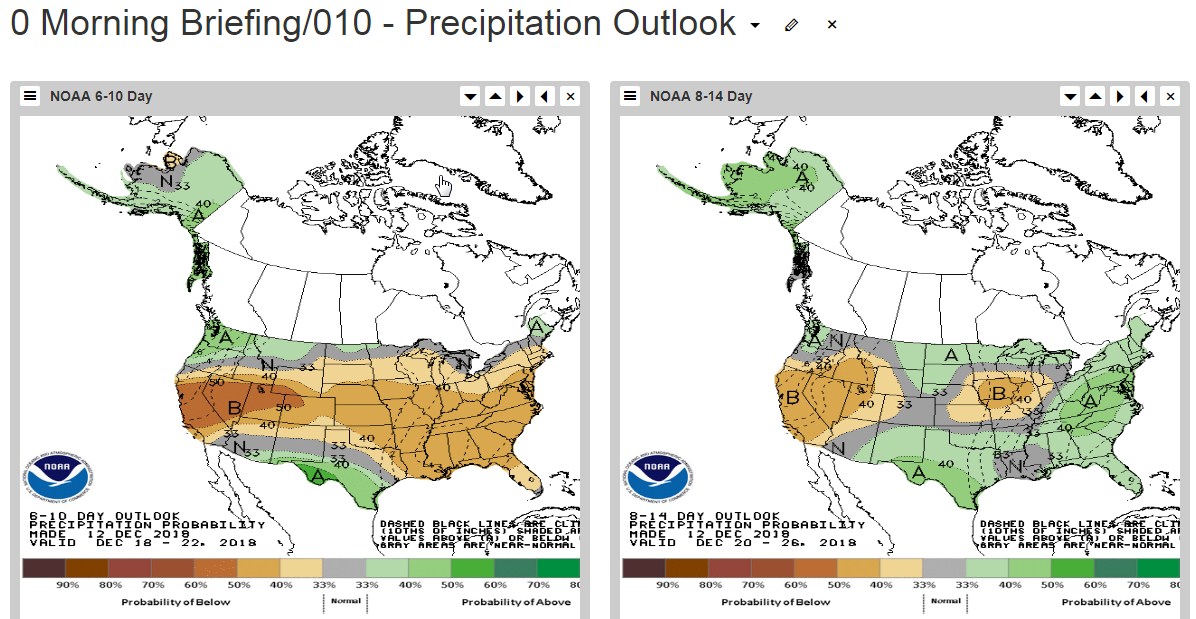 Kalistan, where our friends desperately need water, is a muddy brown, which is appropriate, given that the state’s slogan is “Brown is down, Yellow is mellow”; which refers to how they dispatch their toilettes during these dry times.

Meanwhile, the BOM has been battered: 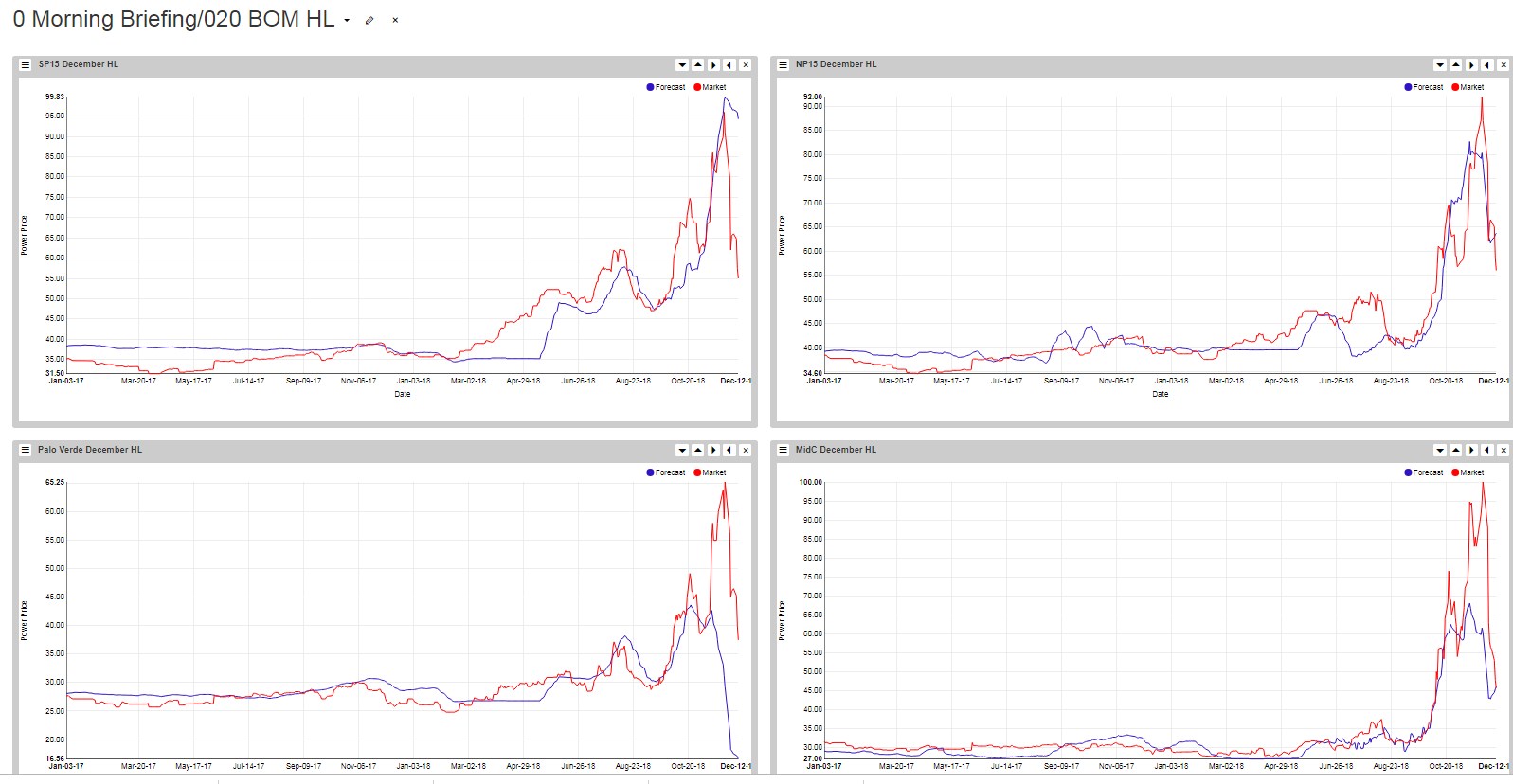 Every traded hub is down from the peaks with no end in sight. Don’t expect that to change as long as that 6-14 day outlook remains warm. Gas is trading in sympathy to power, or is it the other way around?

Sumas desperately clings to a positive basis to Henry in Jan and Feb; we doubt that holds by post-holiday.

Socal Citygate is more resilient, that hub’s infrastructure problems are more widespread and its ability to resolve those problems more problematic, all of which suggests long spreads is/was money.

Both Citygate and Sumas tanked, week on week; the latter has two bearish factors currently in play. Weather, we already discussed, and a restoration of full capacity on WEI, which we’ll address in the following package of plots:

Forget these day to day oscillations, look at the trend post-Oct 10 (day of explosion); nothing but up. Now, on the Canadian side, flows are back to pre-explosion levels. How long until some of that new-found gas seeps across the border? We’d suggest almost immediately. The fact WEI restored cold-snap levels during a warm event suggests they are itching to get flows back to 100% of capacity and why wouldn’t they? As a shipper, they only get paid for moving MCF; plus their customers are screaming to get their capacity back.

Think about what that means. If Sumas is back to normal, all that remains which can be construed bullish is snowpack, and this latest storm system helped move the needle closer to normal. No wonder the forward curves (gas and power) are tanking.

We mentioned that the situation in Cally is a bit different; there the storage system is probably permanently broken, and full import capacity at Socal shows no sign of returning. Though it warmed, PG&E demand has barely come off, its electric demand is up. Socal’s demand fell harder, off 400 MMCF, and now its back to injecting gas, something we’d expect to continue for the next few weeks given the extended warm weather. At some point, even Socal Citygate will come under attack, but not in Dec; we doubt – hang on to those long spreads. 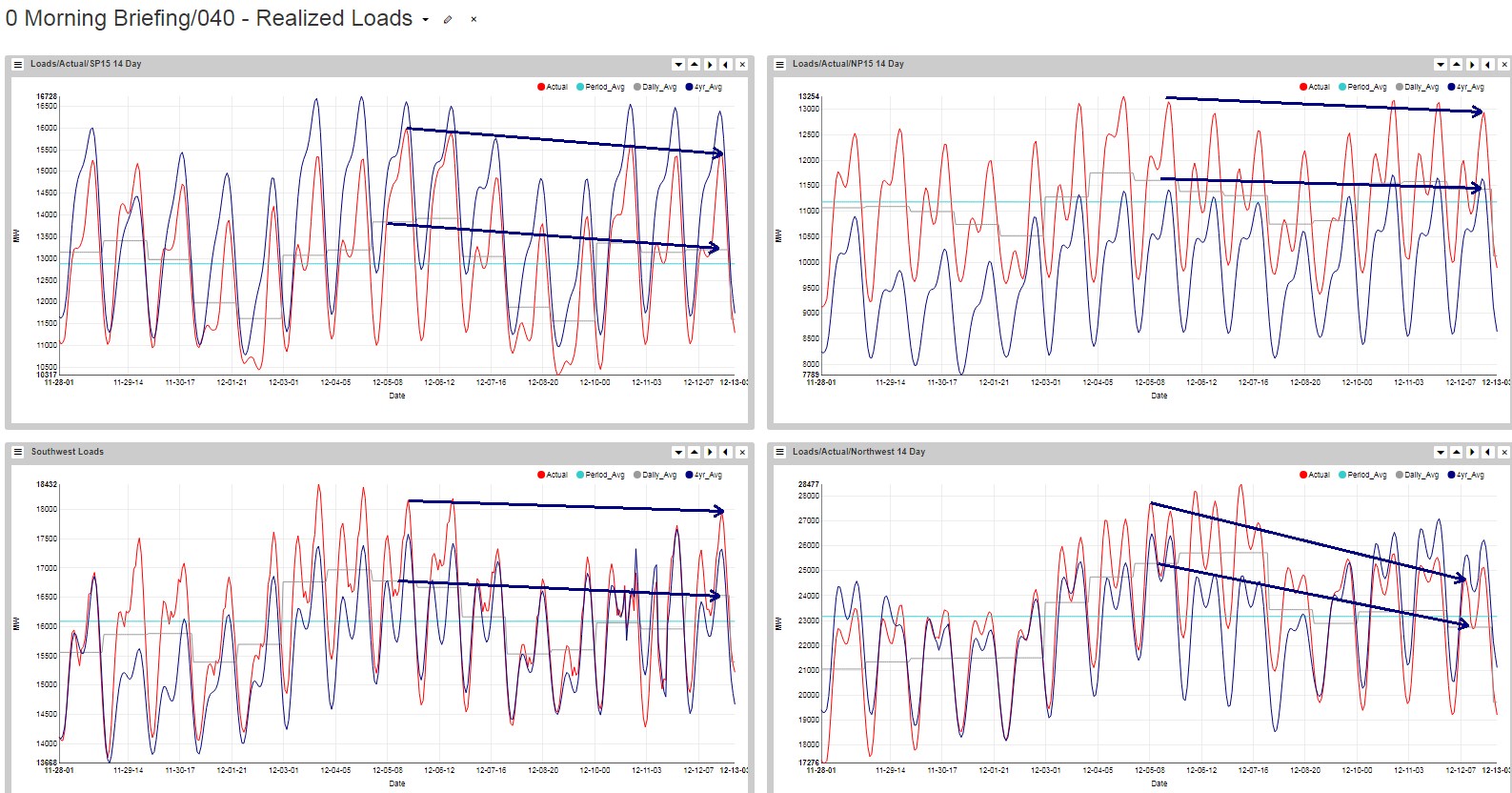 I think we predicted the week-on-week power demand anomalies would get ugly; all hubs are down, but the MidC has the sharpest decay. 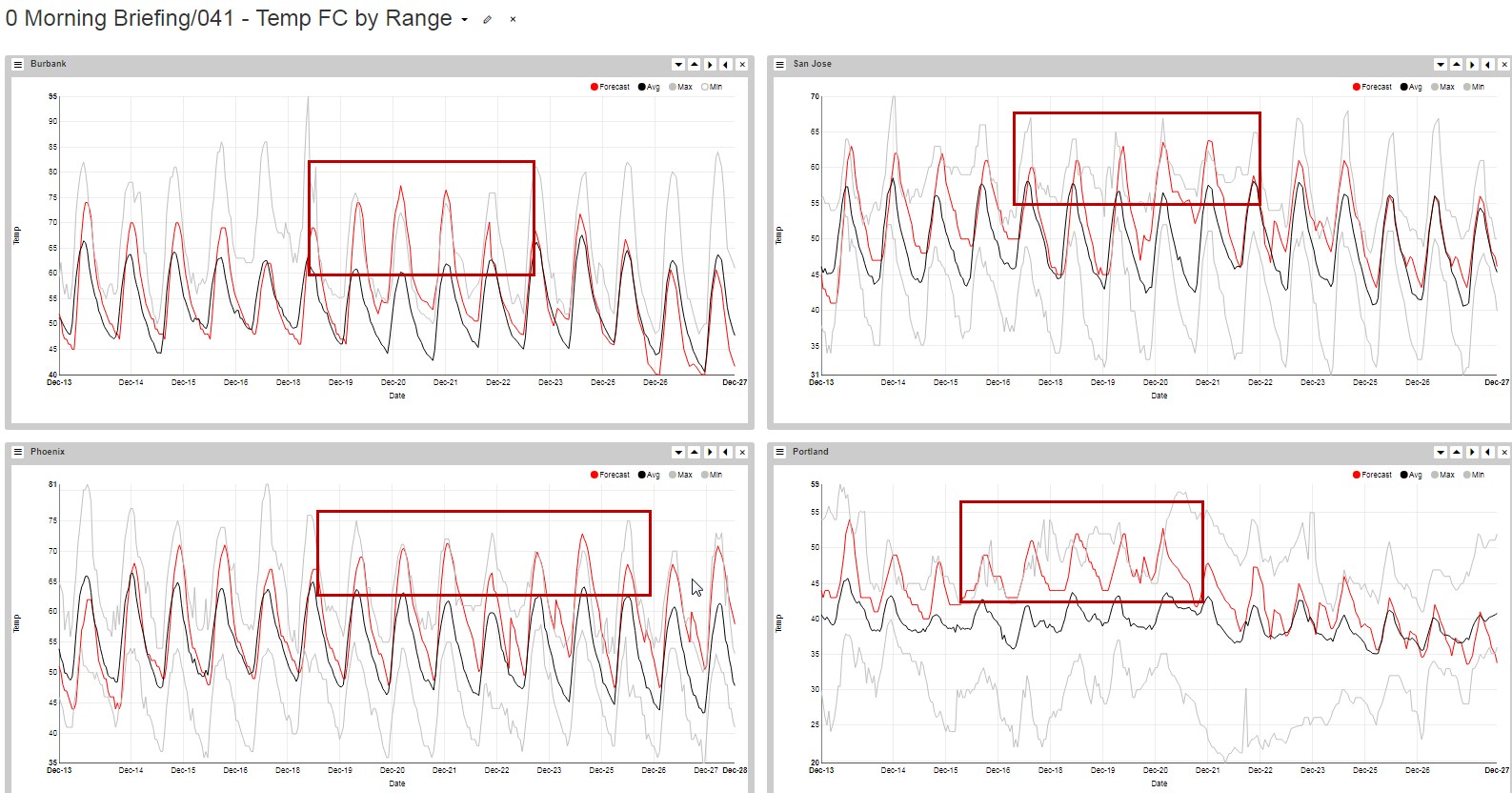 And if anything, that decay will continue well into next week as every hub will approach record warm (ten-year records) by the middle of next week. 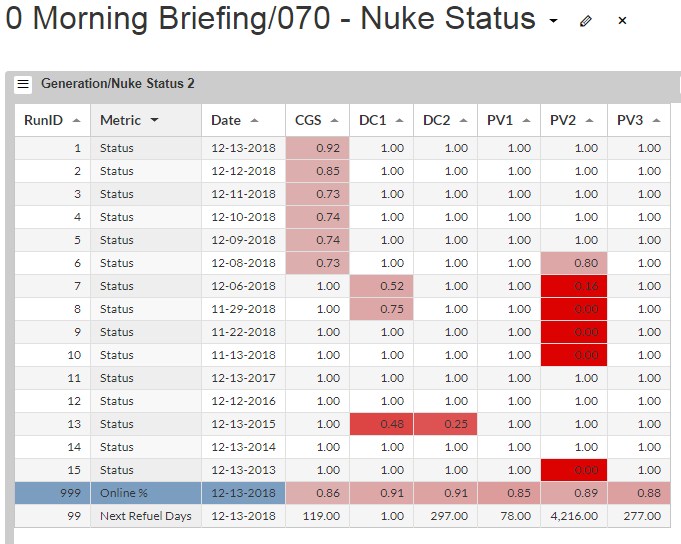 CGS is sputtering, now BPA doesn’t even care. All the other nukes are back to full capacity, just when they’re not needed.

With Sumas flows increasing, now the I-5 gas turbines are returning, adding more misery to the MidC longs. All they can cling to now is a dry year but won’t get paid for that until we get a bit deeper into the water year. More on that in post #2.

Did we say the misery index was rallying? Oh yes, and check out that MidC wind – like nearly 100% of BPA’s capacity for a few hours. On top of that, all three ISO hubs have seen their solar approach full capacity, too.

Water supply (NRWFC’s version) rallied with these storms, but now its pulled back slightly at TDA and GCL, but check out that whipsaw at Ice Harbor (Snake). An upswing of 11% (for a day), then a plunge downward of 7% a few days later; for our model to do that we’d need about 20″ of SWE, then 90 degrees to melt it. 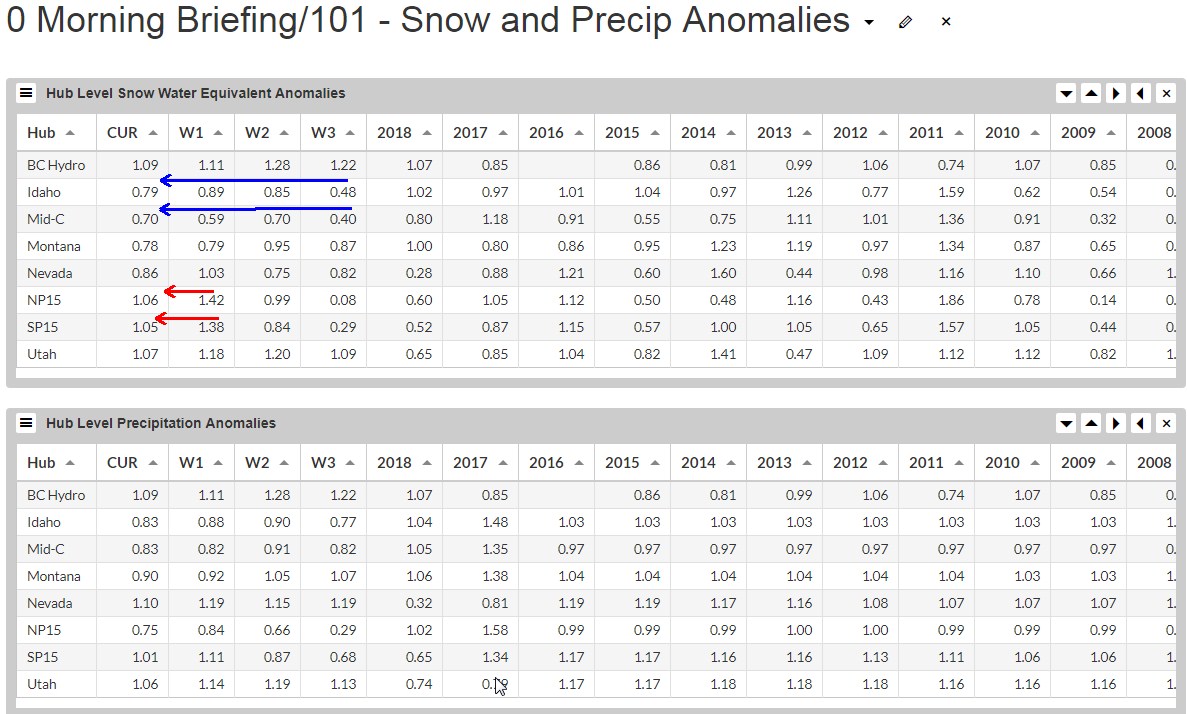 This a new dashboard, one which summarizes the Precip and Snow at a hub-level. The Northwest rallied but remains well behind a typical year while Calif. tanked but is clinging to above average. El what? 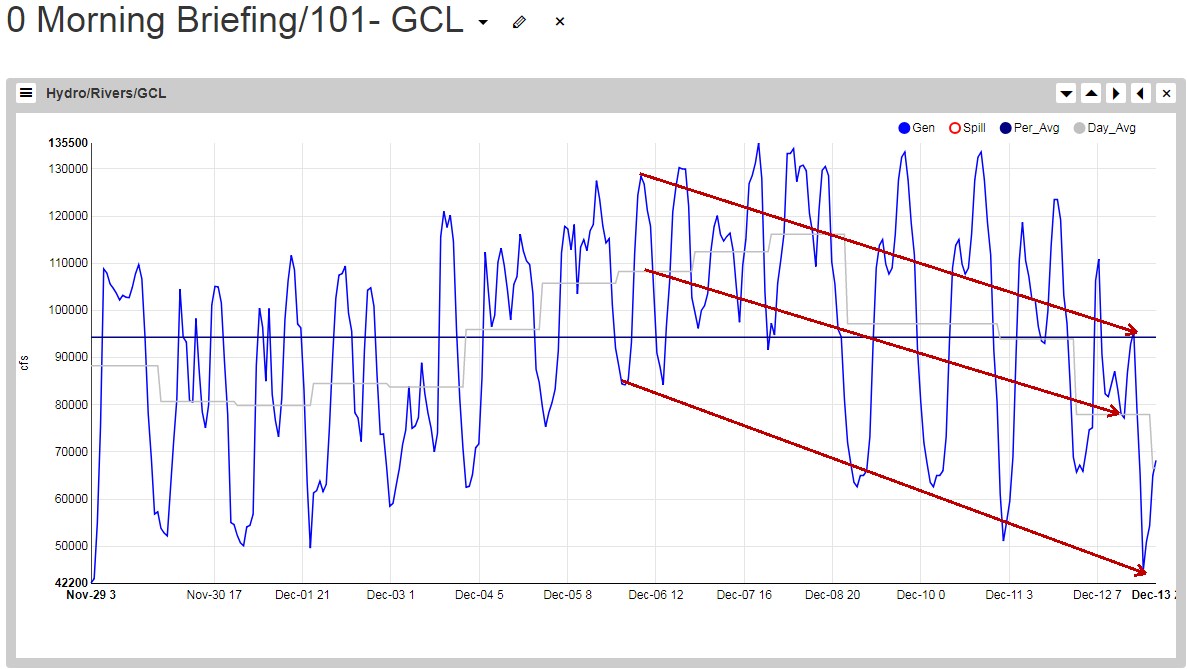 Coulee discharge is off because loads are down; BPA doesn’t need the energy, especially with the return of its gas generation (Sumas).

This is just the start; we see another 2000 MWs of peak thermal coming back online soon: 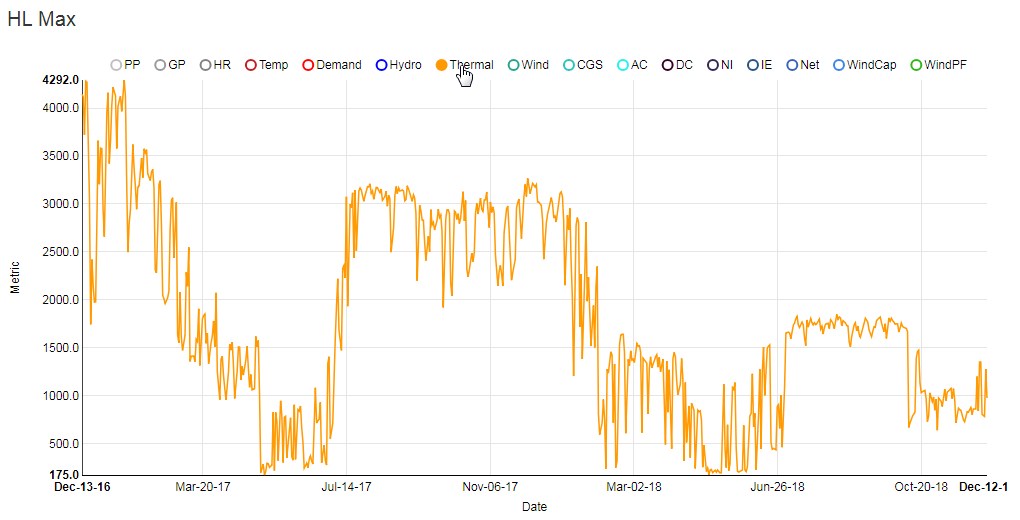 Soon as in by year’s end, most likely.

As discharge drops at Coulee, its inflows are picking up; check out that spike to 6k on the Spokane; rallies at Clark Fork and Pend Oreille too. Regulated discharge at Libby is up to 22k. We don’t expect increases in inflows to result in energy rallies; instead,  BPA will refill its reservoirs. 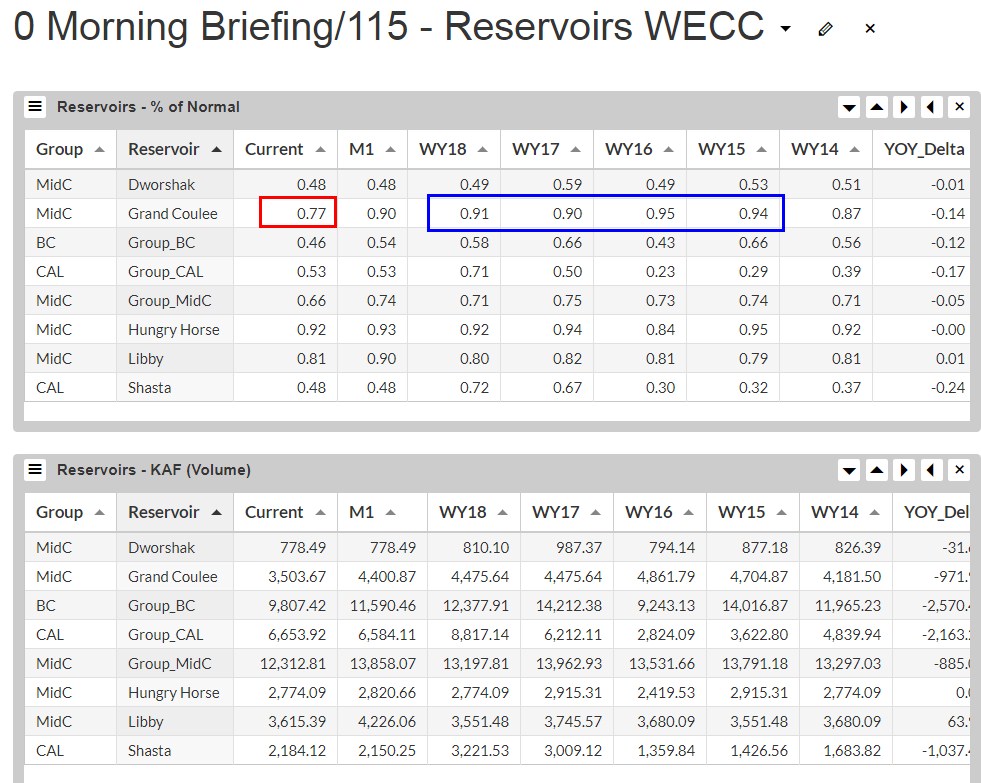 Coulee is a full MAF (14%) lower than the average of the last four years. No, these new inflows will be left in Lake Roosevelt and used for the next cold snap.

More evidence of a big storm; flows on the Snake River side flows rallied hard, and most of that water will flow through all the Lower Columbia projects. Hells Canyon can catch the Upper Snake but not the Clearwater or Salmon.

As loads fall and the state dries out (again), the total ISO energy is fast declining adding an, albeit, modest bullish factor to the mix. 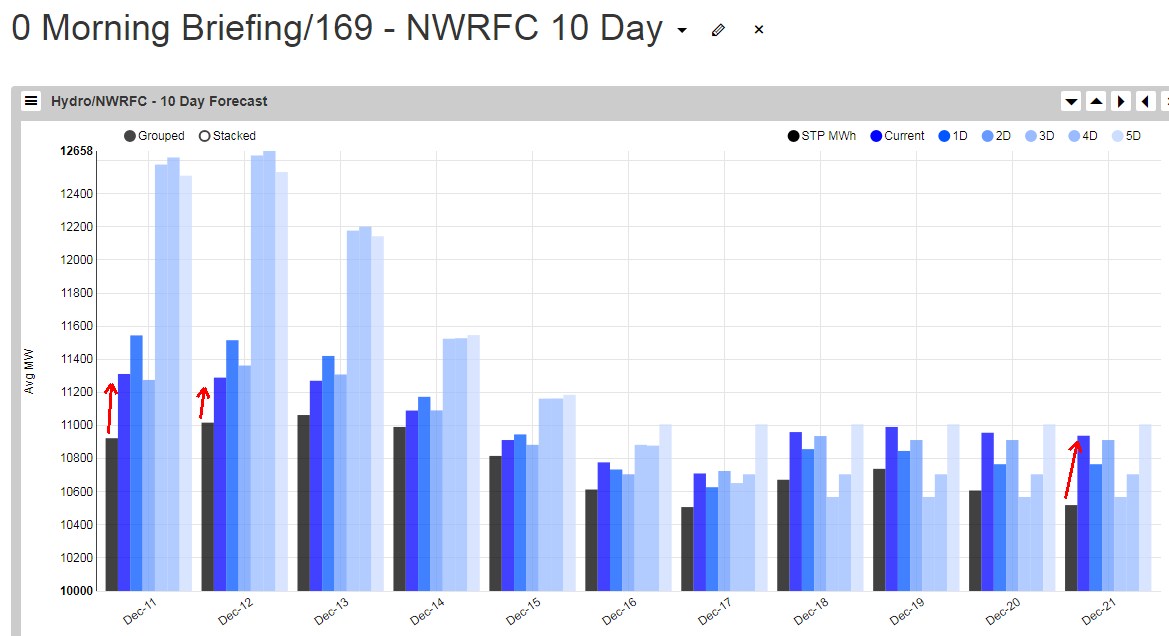 All ten days in the NWRFC’s 10-day are showing increases in energy versus Monday’s STP, but these are small and speak to the relative stability of Northwest hydro.

No material changes to BPA’s TTC; the AC is derated from a week ago’s forecast; the DC is unchanged.

Check out northbound flows on the Northern Intertie (to BC); another strong bearish indicator. Same with southbound flows on Cob and Nob, each approaching TTC. Just the opposite in the southern interties, most are at flowing at two-week lows.

Bearish, but that sentiment is relative to price. Has price dropped enough to warrant buying something or unwinding those long rolls and spreads? More on that in the next post.