The chances of a white winter are fading fast as a warm front moves in following this weekend and should linger well into the next weekend as well, though the Northwest may see normal weather during the 19th-25th.  There is a 75% chance of above-average temps for the entire WECC for the 17th-21st.

While temps are expected to land above average, the weather won’t be dry in the Northwest as the chance of more than normal precip hits 70% for most of Mid-C.  Whether that falls as rain or snow in the mountains in still to be determined, however.  The 19th-25th look decidedly drier for California and the Southwest.

SP-NP congestion is much more subdued as the 11th had a difference of $5 during peak prices. 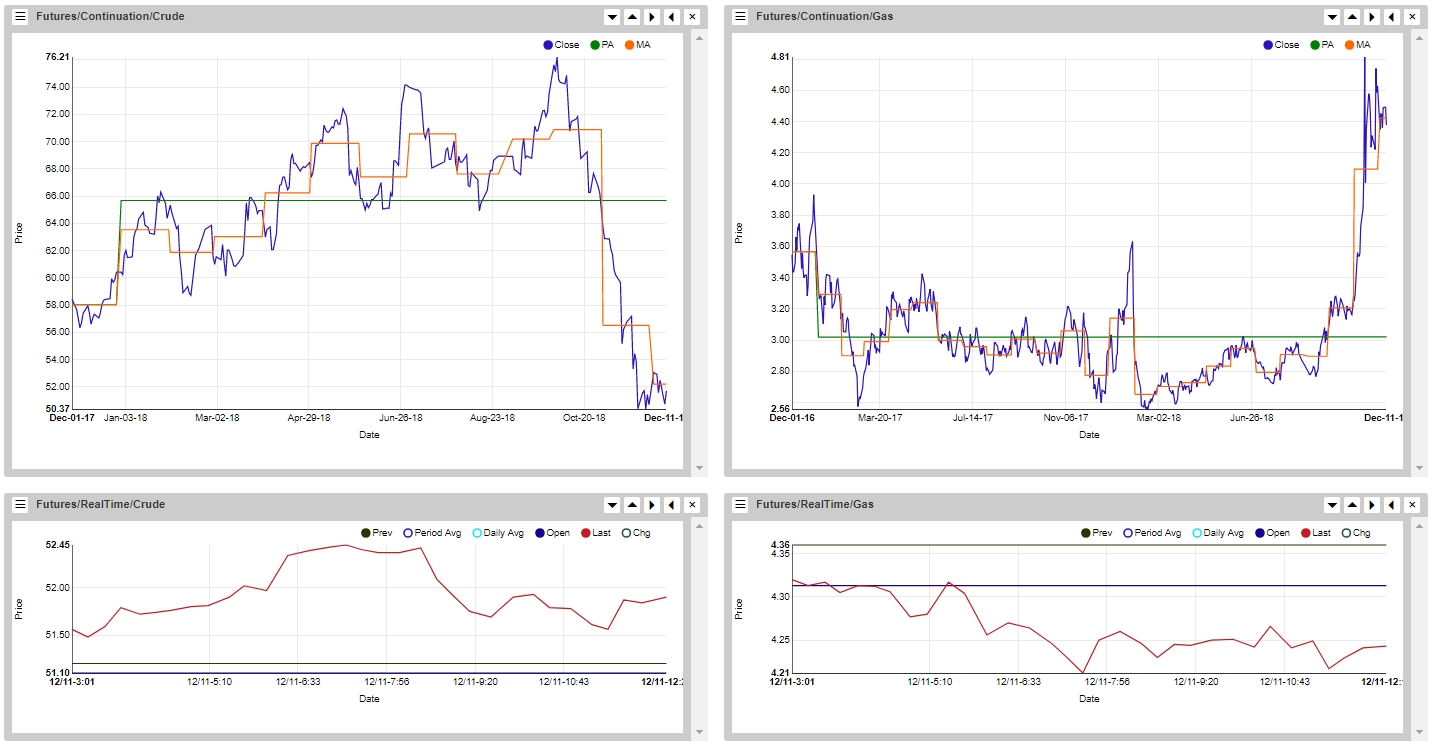 January Sumas is still sinking after yesterday saw prices fall $0.62 day-on-day to $6.72, also marking a $4 drop in just a week.  February is levelling out in the high $4’s, after notching its place at $4.87 yesterday.

Meanwhile, Citygate has taken over as the high-watermark in both months at $10.15 and $8.45 respectively. 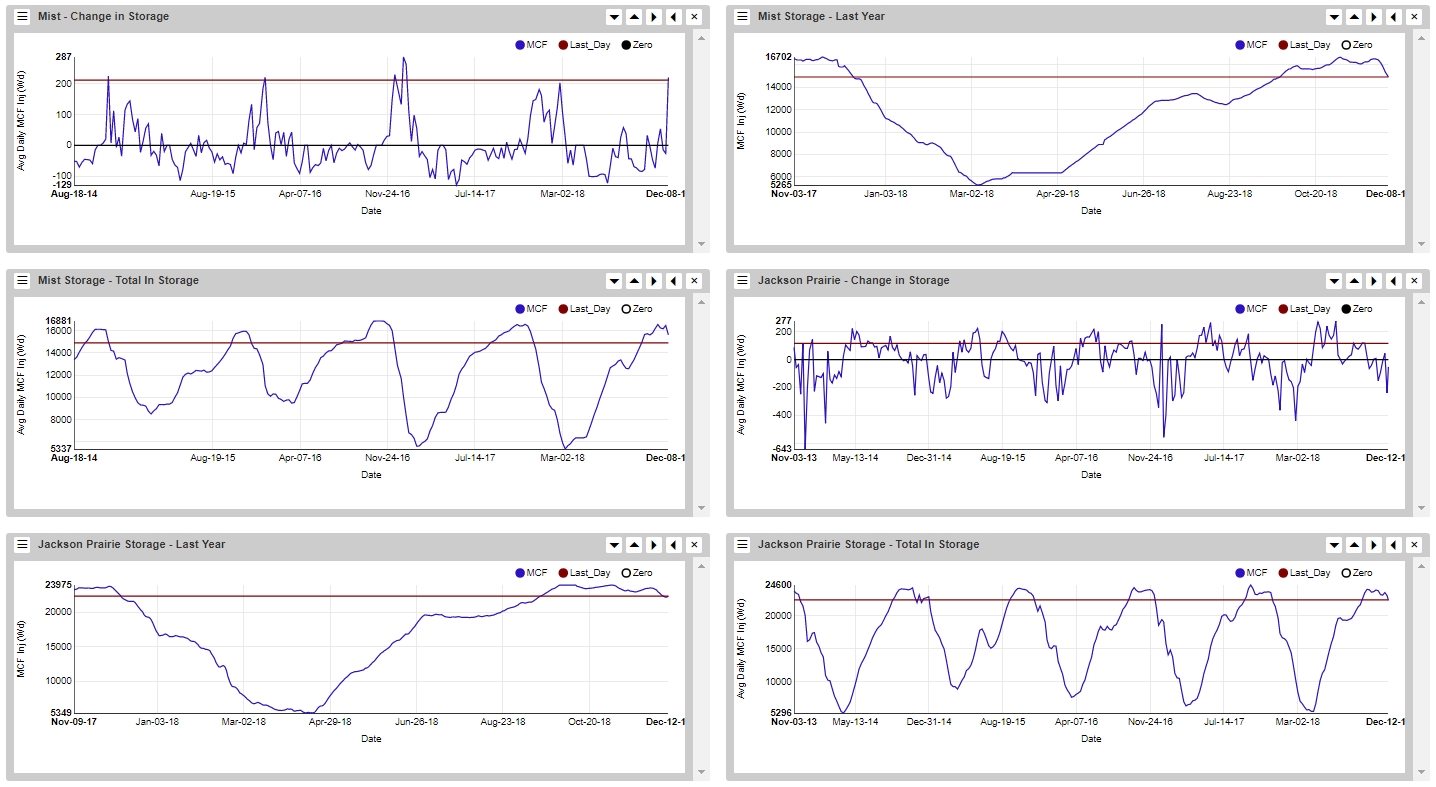 Mist saw storage run positive once again in its most recent update, though the total storage fell 700 MCF short of the same date last year.

Jackson Prairie remains negative at -53 MCF as of yesterday and has added to storage just once since Mid-October.  Daily change in storage dipped as low as -240 MCF as of the 8th of December. 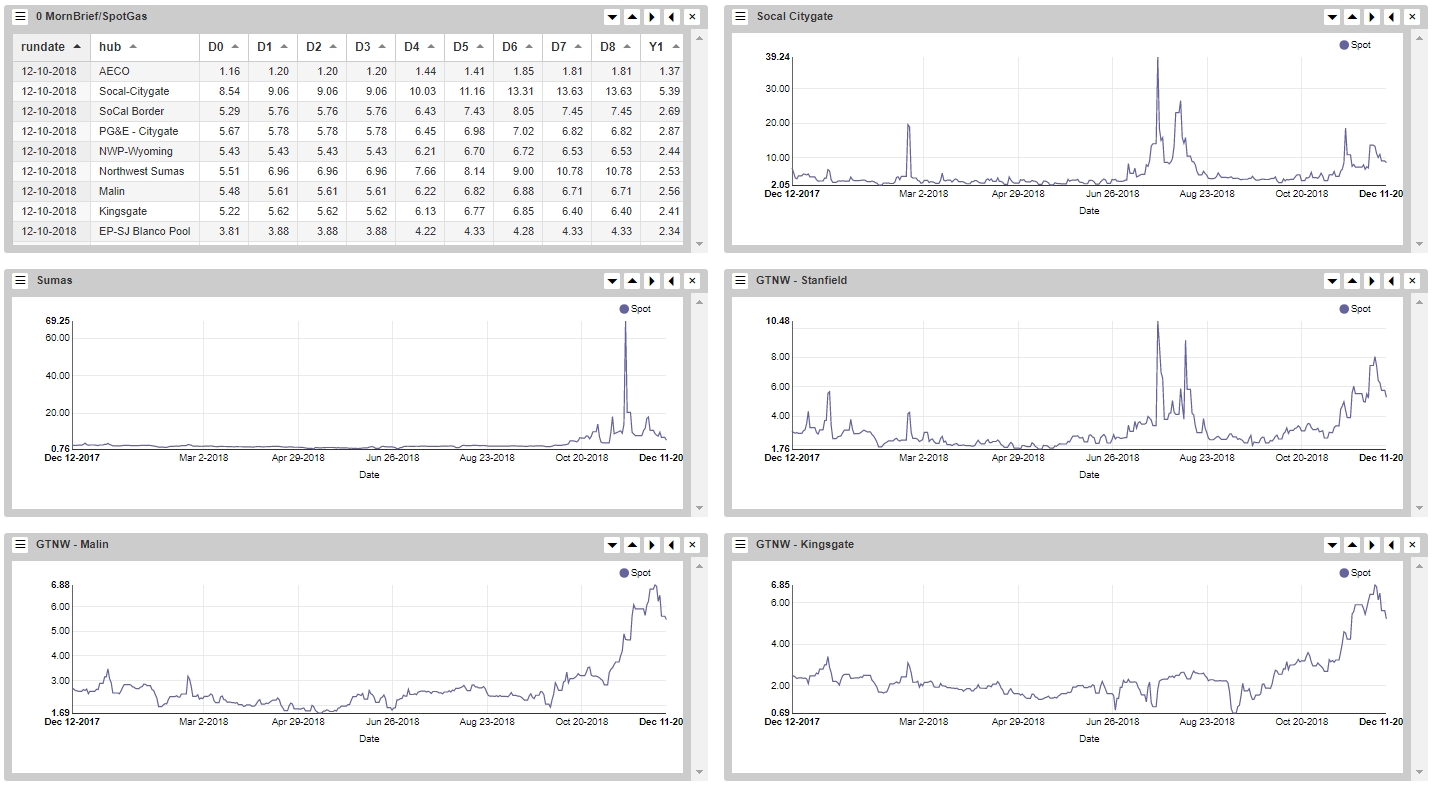 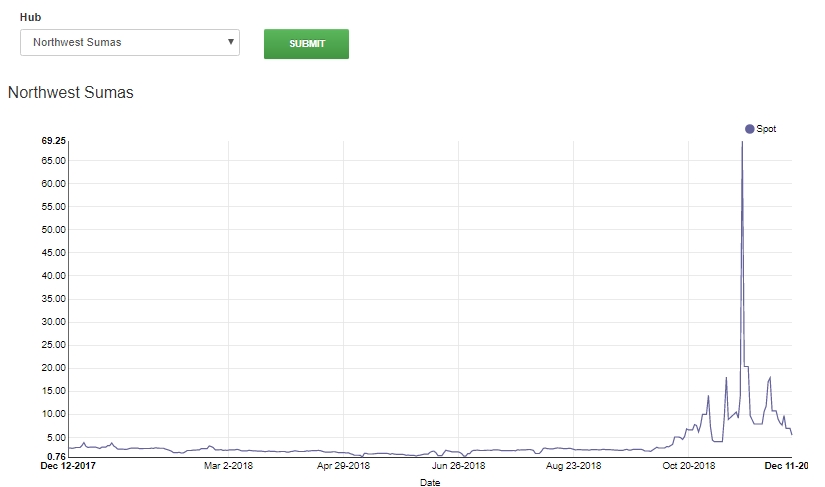 Sumas is now less than 1/3 its price from November 30th. 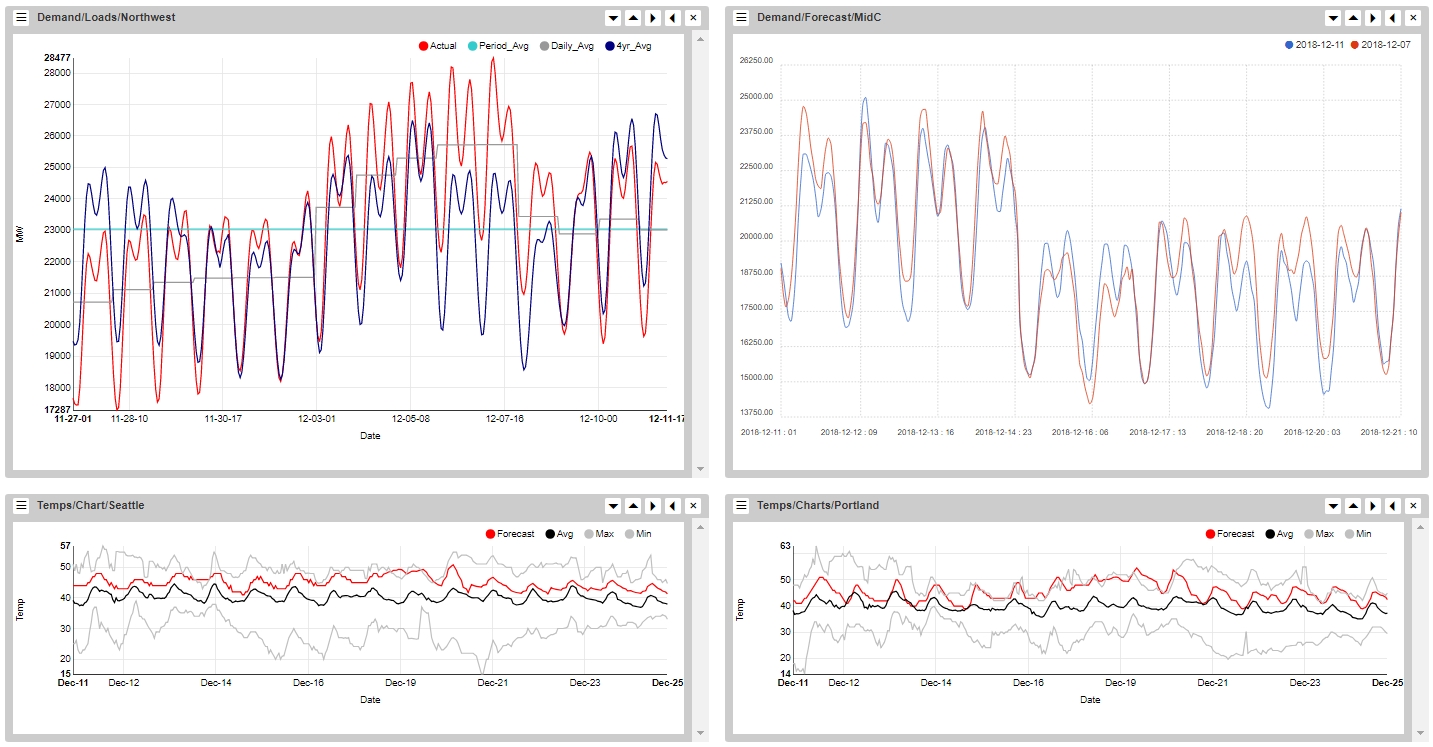 Seattle doesn’t show a single hour below normal through the entire two-week forecast as most hour fall between 5-8 degrees above normal.  December 20th marks the highest high at 51, while daily lows never drop below 41.  Mild, mild, mild Christmas.

Portland crosses normal three times over the next two weeks but remains well above normal for the rest.  Look for a high of 55 on the 20th, and daily lows never falling below 39.

Loads were off close to 100 MW yesterday but were down more than 1,500 MW week-on-week. 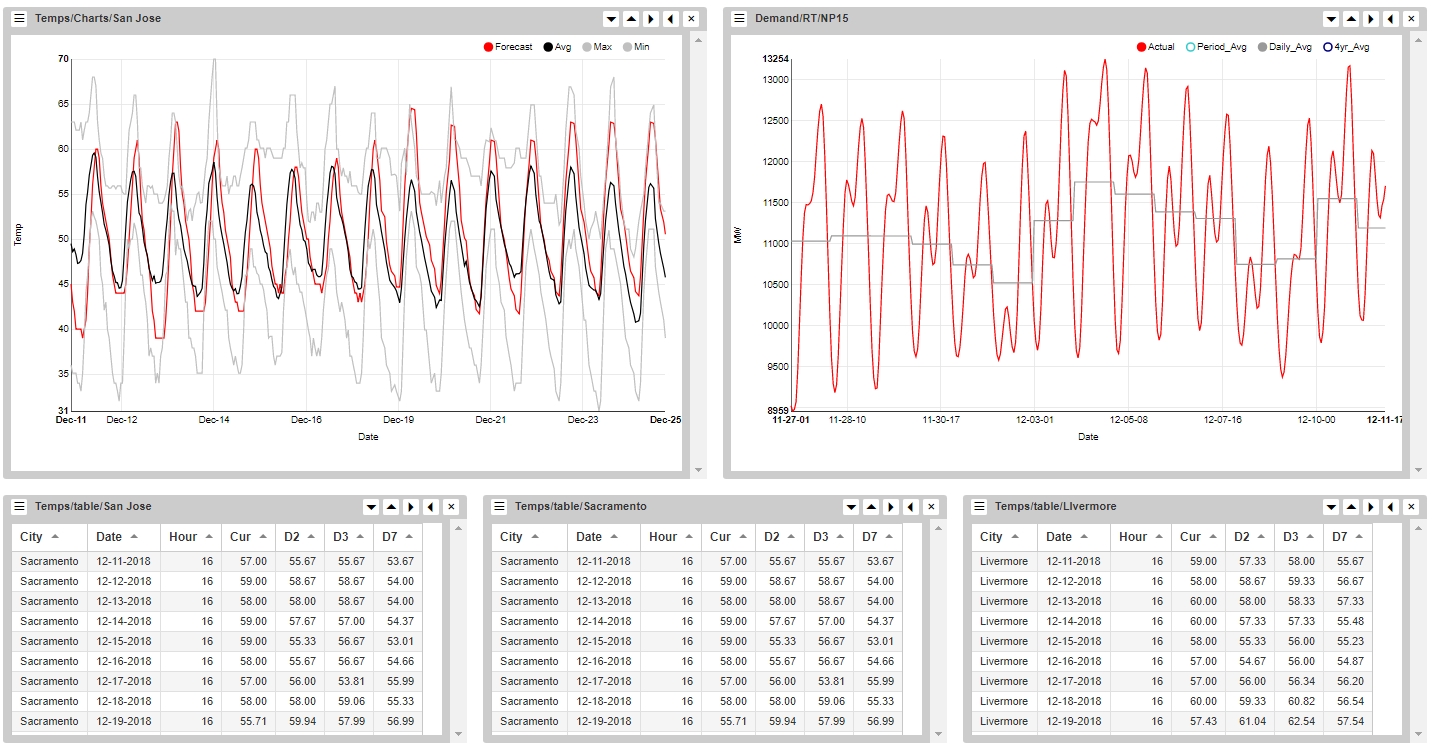 NP peak demand fell yesterday, though off-peak loads were up close to 300 MW.  Week-on-week loads came off more than 300 MW as well.

San Jose is projecting cold nights over the next three days, especially on the 13th where temps fall to 39, six degrees below normal.  Despite cold nights, San Jose is forecasting above normal daily highs as well as the 13th is set to hit 64, seven degrees above normal.

Sacramento is showing temps three or four degrees cooler than San Jose, though all hours should remain above freezing.  Temps should also stay above normal during daylight hours. 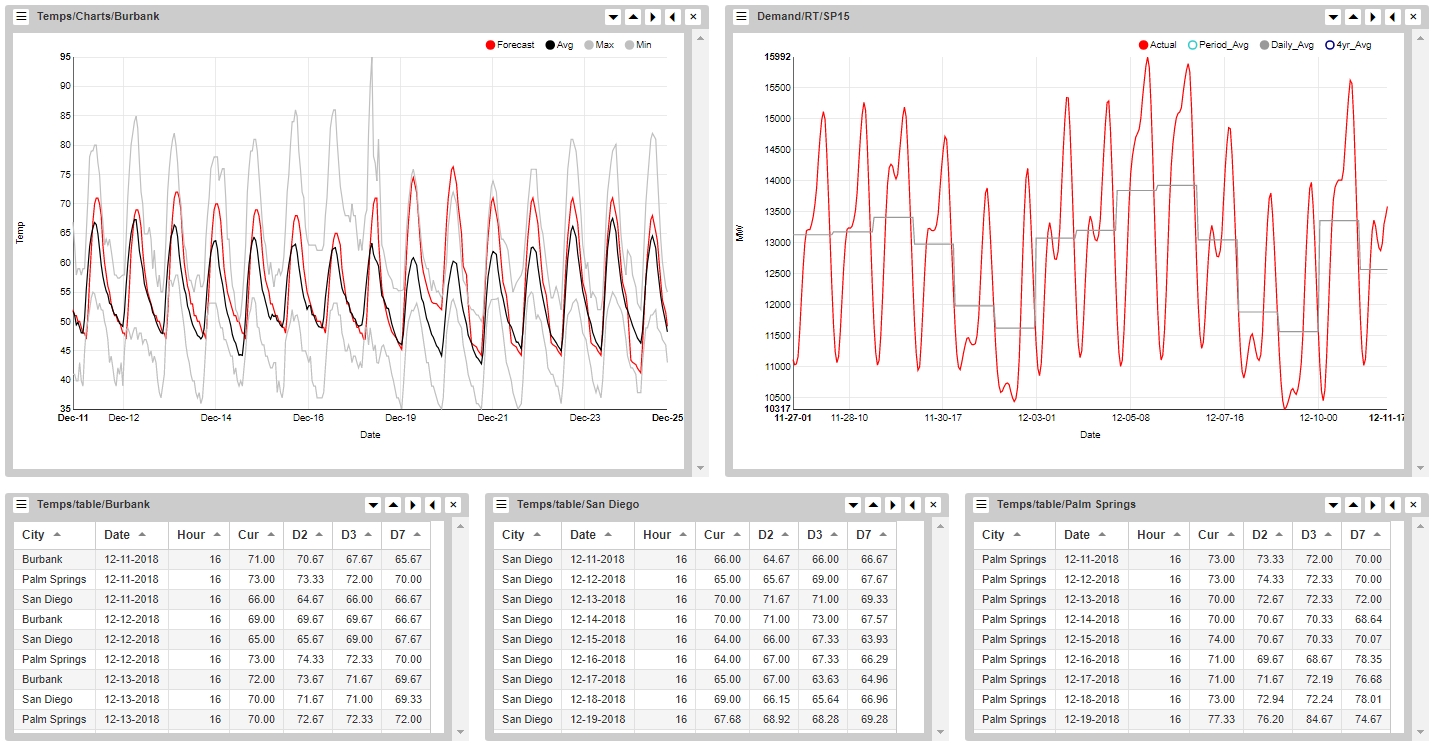 Burbank should top out at least 70 in two of the next three days and could climb as high as 76 by the 20th.  Despite the warm days, overnight temps are projecting right at normal for most hours.  The deserts are warming up as well with flirtations of 80-degree days as we approach Christmas.

Other than a pair of cool nights on the 13th and 14th, Phoenix should record consistent above-normal temps for most hours over the next two weeks.  Look for highs near 70 for days 4-14.

Las Vegas could get a couple cooler nights on the 14th and 25th with temps at 39 and 31 respectively. 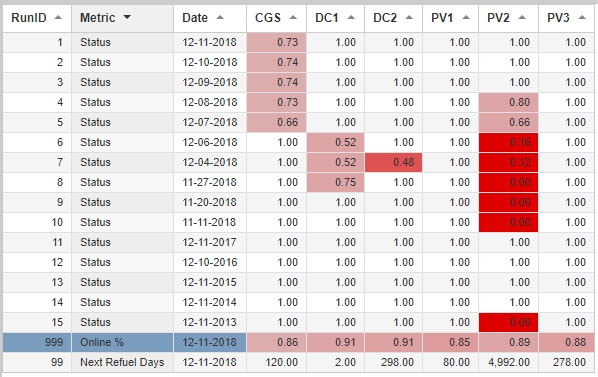 SP-15 solar sunk to under 1,000 MW on the 6th and slowly made its way back toward normal by the 8th before again dropping to just over 3,000 MW yesterday.  Wind added just 150 MW on most hours during the drop, coming a far cry from making up the difference in generation.

Mid-C wind remains largely down for the month of December as no hours managed more than 470 MW, though the monthly high was set on Monday, perhaps a sign that generation could pick up soon.

The Encina units contributed the most to the outage increase. 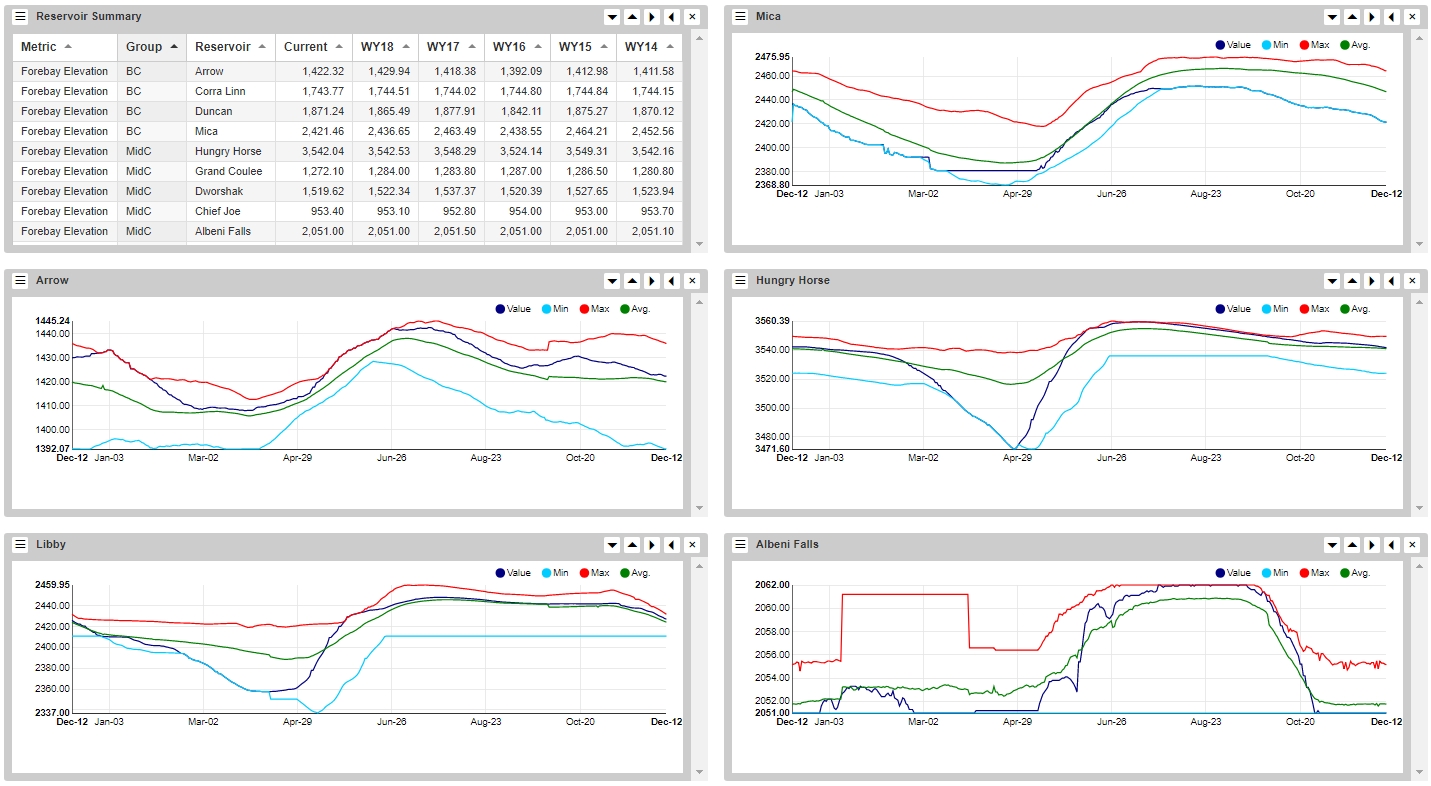 Mica and Arrow mark the largest year-on-year movers in BC with reservoirs 15′ and 7′ lower than last year.  Despite the drop, Arrow remains higher than most years.

Two weeks has added plenty of low-level snow, but that’s not equating to much in the mountains, especially in the Cascades which sit well below 50% in most stations.  Montana lags behind now as well despite early season snow falls.  California is hanging onto a normal to above normal early water year, while the Snake River Basin lags behind. 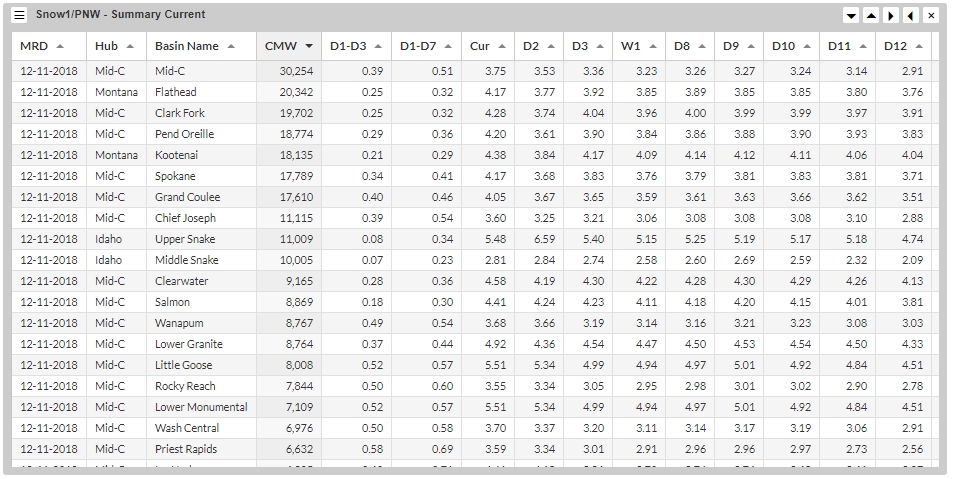 The snow depth summary shows that there isn’t any melt that’s contributing to the slow year, it’s simply due to little snowfall.  The heaviest week-on-week snow station, Wash West, amounted to just 0.87″.

The Salmon River wasn’t always pacing this far behind normal.  The basin was comfortably above normal by the end of November, but with little snowfall since, the Salmon is ahead of just two years as of today, 2009 and 2010. 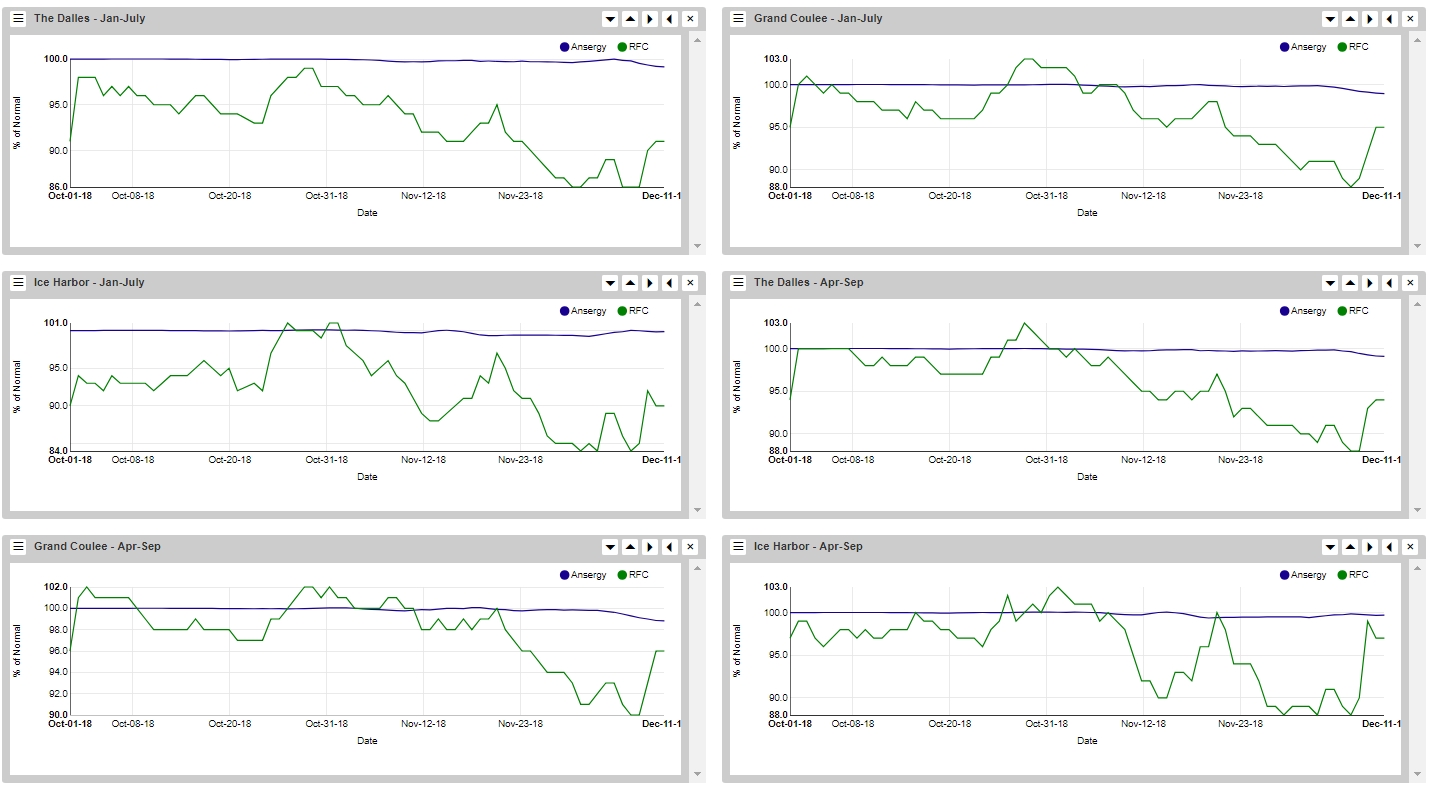 This is a peak at the difference between Ansergy and the RFC water supply estimates.  Ansergy is maintaining its position that we will see a revert toward the mean while the RFC holds a below-average estimate for this year.

COI marked two changes, the first was a three-hour, 1,200 MW drop on the 17th, and the second, a much longer, 1,000 MW decrease beginning on the 20th and extending through the rest of the forecast.