Well, it seems most of the cold weather is over, at least forecast-wise, though today is technically the last day of the cold.

Most of the WECC reverts to normal, maybe slightly below, and then slides into a warming trend per NOAA, though Dark Sky teases of another cold wave hitting LA and the Bay Area in days 9-10. We wouldn’t bet on that; we’d bet on every city on the west coast growing ten degrees warmer by the weekend. 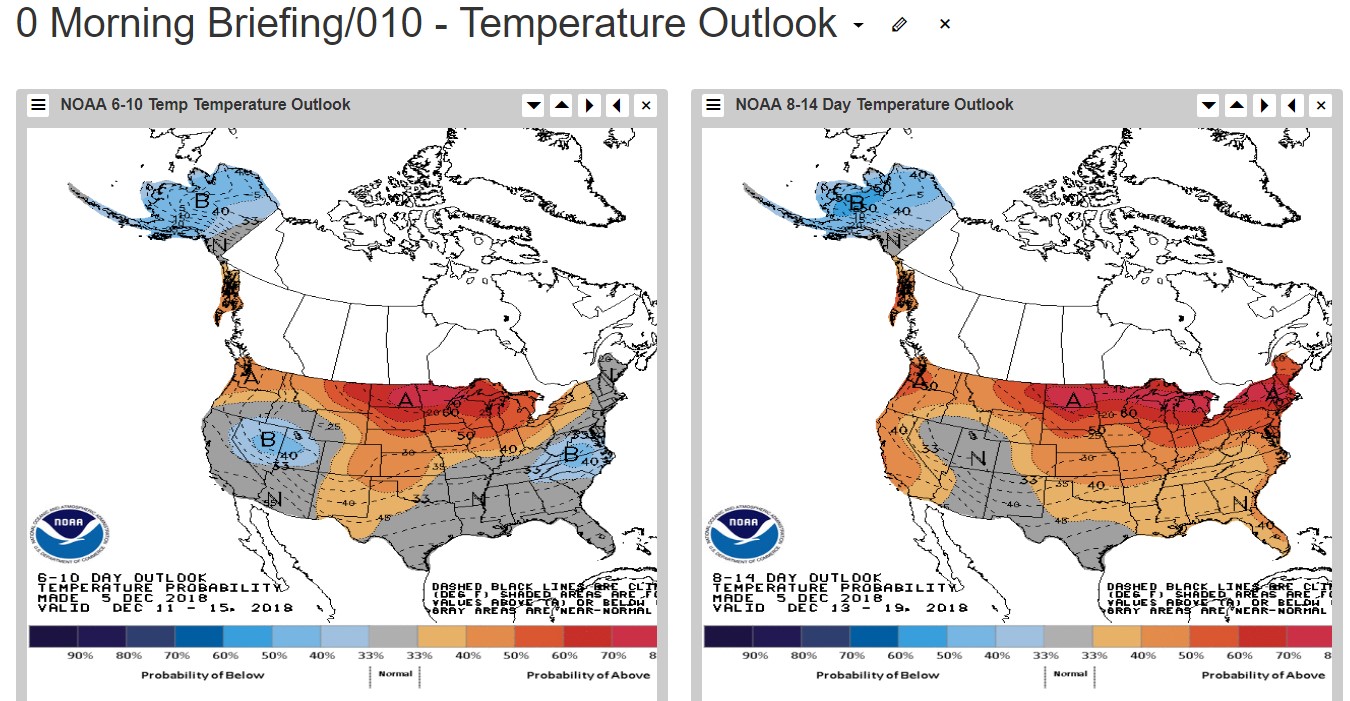 That’s what NOAA painted yesterday, who knows what she’ll post today; these 6-10/8-14s have been all over the weather map, kind of like Sumas Spot or those pesky winter MidC rolls??? While we’re on the weather wagon, here’s the precip outlook: 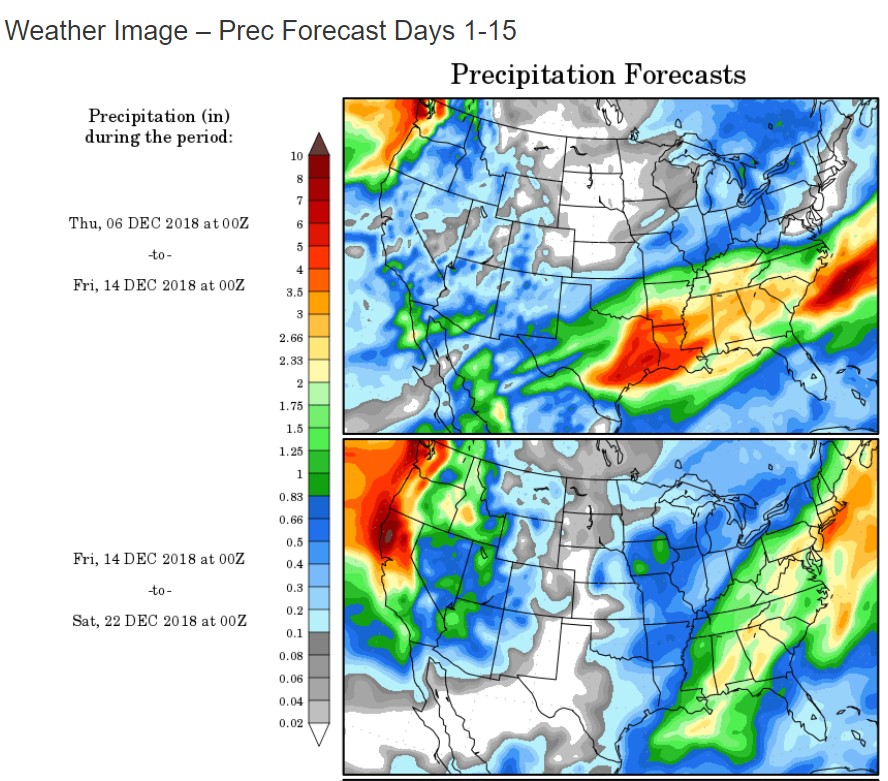 These precip forecasts are as volatile as the temps, though the trend this winter has been to tease of catastrophic wetness in the 8-15 which turns to draught in the 1-6. Would only take one to land to revert the Northwest close to normal; Kally’s already there.

Let’s talk about gas since that fundy remains the WECC’s primary driver. 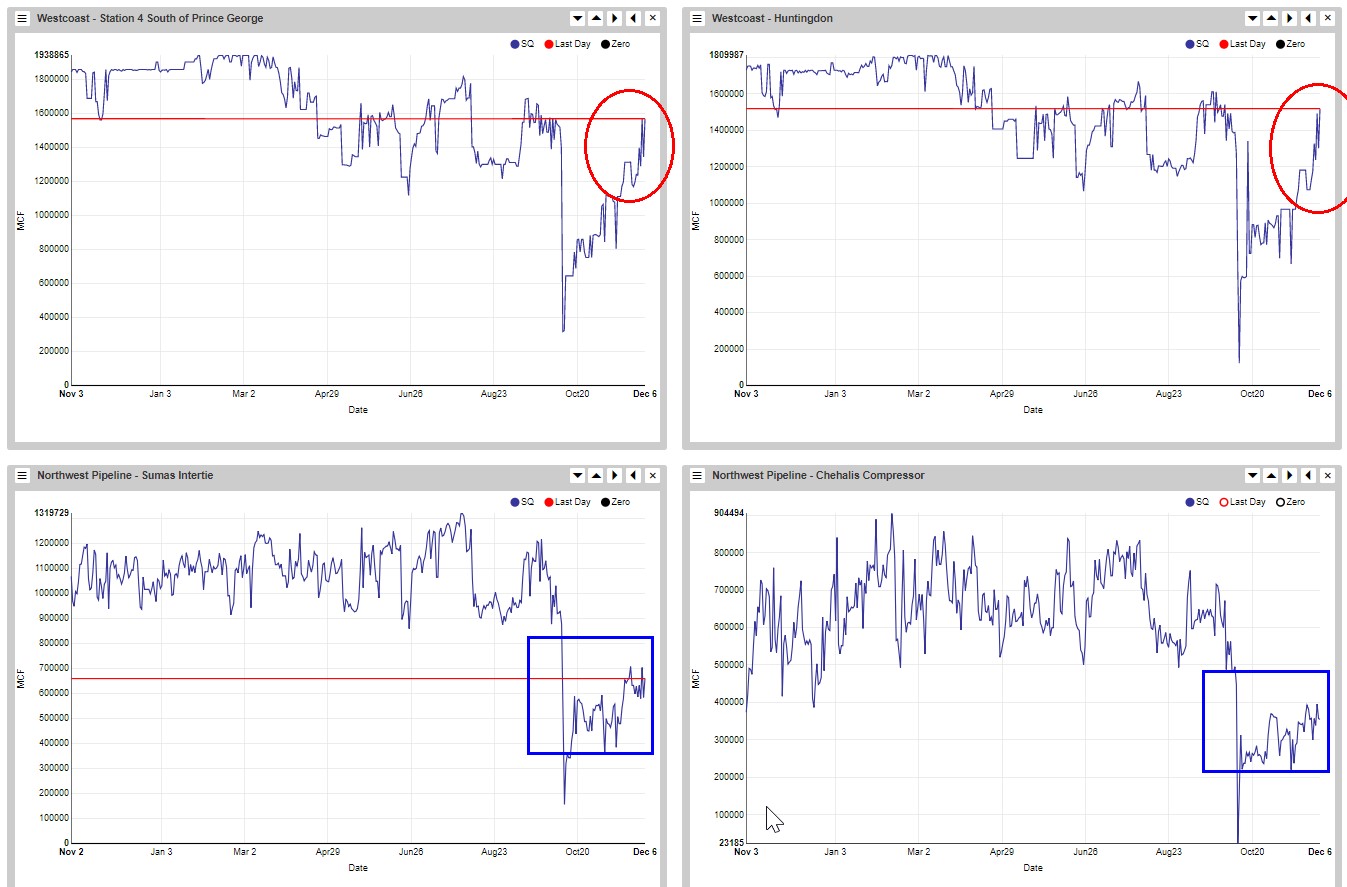 Westcoast Pipeline has restored nearly all of its southbound capacity, at least for the short-term. One alert reader pointed out this was just to serve the incremental cold-driven demand and suggested the pipe backs down to a “safer” pressure level. Not so sure about that, didn’t WEI just prove the pipes are safe? If I was a betting man, and once was, I’d be leaning more towards WEI going to 100% sooner rather than later. If so, most, if not all, of MidC’s Sumas premiums disappear. We already see that take place, but more on that in the post to follow. Also, take note of the disconnect between changes at Huntingdon versus Sumas. In past times, the R Value between the two points was nearly 1.00; not so much of late.

Something else we saw was the return of gas-fired power in the I-5 corridor:

Chehalis, Freddy, and Goldendale all fired up which means so did River Road. Of course, this was to serve load, but somehow, somewhere, the operators found the gas. Some of that they pulled from JP: 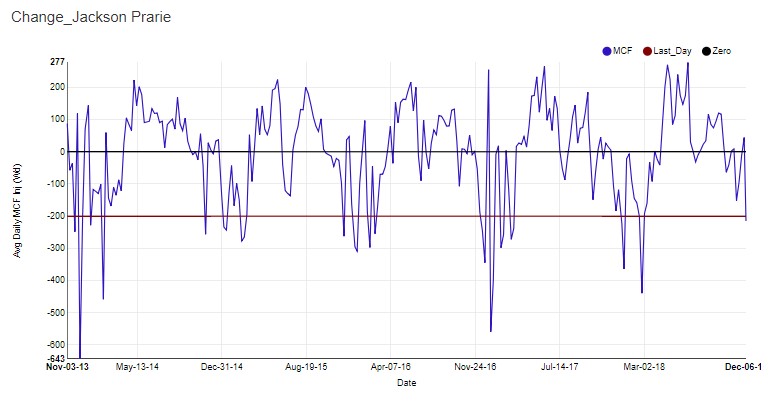 A big phat 200 MMCF draw, but compare that draw to other big winter draws – not even close the 600 pulled a few times in past cold events. This is interesting since it bookends what happens during a constrained Sumas day while Seattle posts lows in the high 20s and confirms a fear/hope/expectation that all the dire predictions were driven by hype and not reality. The truth is the system is reliable, and utilities hate posting unserved load. Just how did they dodge the blackout bullet?

BPA’s peak loads were up 2000 MWs, nothing to sneer at, but Hydro rallied 1400 and exports dropped 300. All of BPA’s cold snap load is thus met. Coulee provided much of the incremental power: 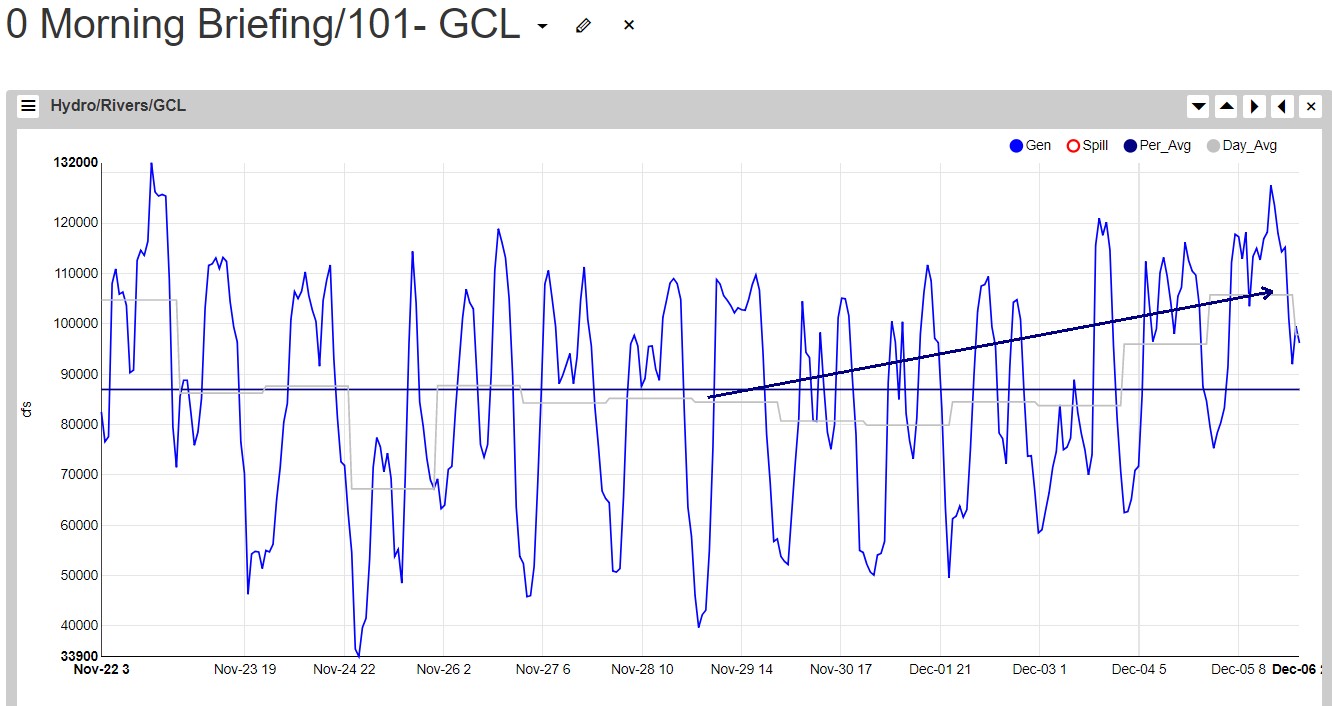 Flows through the turbines were up 30,000 cfs from last week, some of this came from increased inflows, the rest from drafting Coulee’s reservoir:

Coulee’s reservoir is not even close to its ten year low for this day of the year, suggesting there are more bullets left, though the number is finite. But what with more warm weather and possibly big wet, it seems the Northwestern Americans dodged a disaster. Given the return of the I-5 turbines and increased flows into Huntingdon perhaps those increased flows into Sumas saved the day?

Note something odd? Check out the rally in the derived Vancouver area demand (Huntingdon minus Sumas) and the Puget Area Demand (Sumas minus Chehalis). Either there is a lag between NWP and WEI’s nom cycles or the Canadians are not sharing the love. What happens when they loosen the Sumas spigot? Well, we could expect to see at least an additional 200 MMCF south-bound and those I-5 turbines run through the balance of winter.

Let’s look at DA LMPs to get an idea of how bad it indeed was this week. 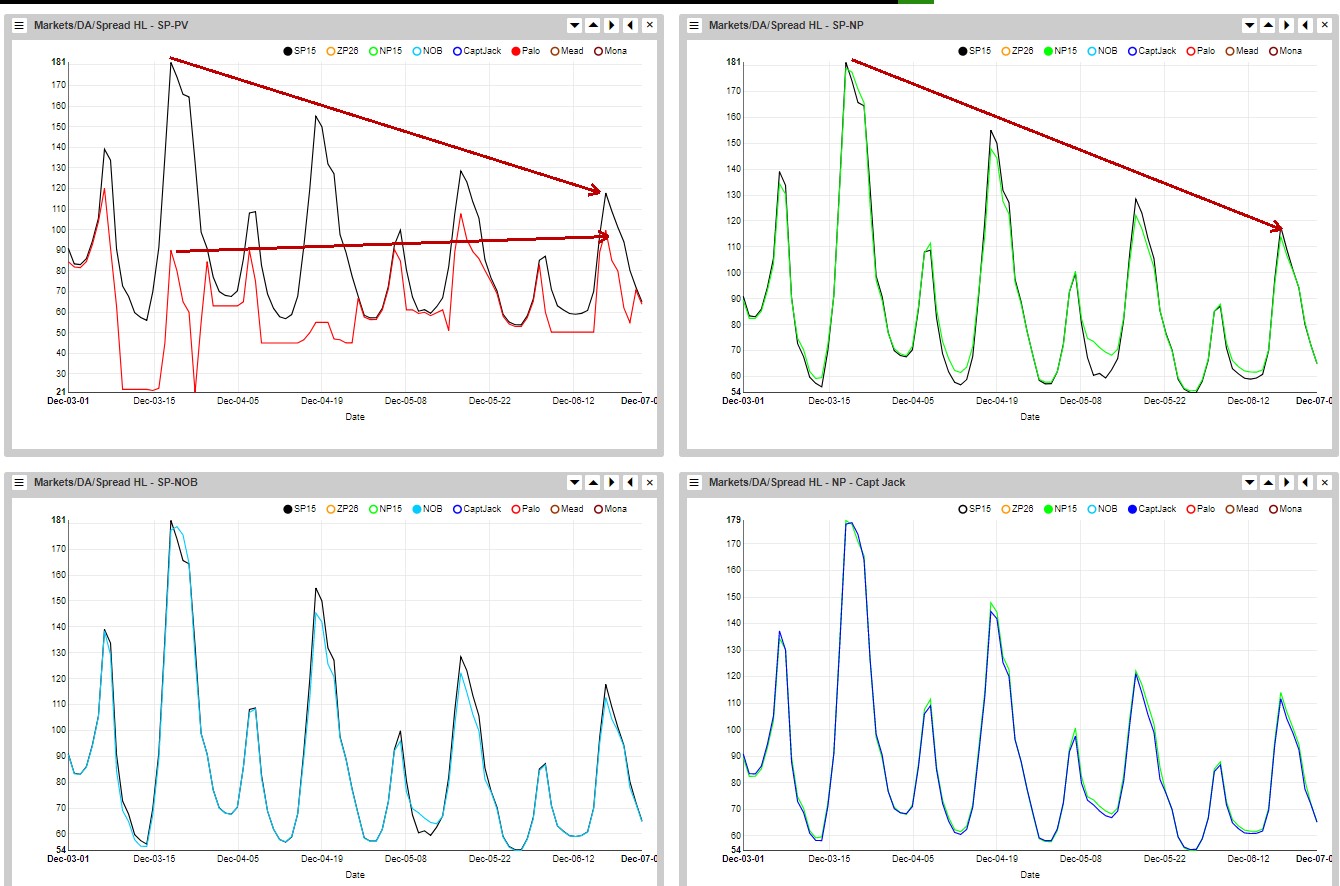 Oh, prices came off, they didn’t rally. From the ridiculous Sunday for Monday clears, the LMPs tanked $65/mwh. Also take note of the massive PV congestion, almost every hour traded at a discount, a big one at that. As goes power, so goes gas – or is it the other way around? 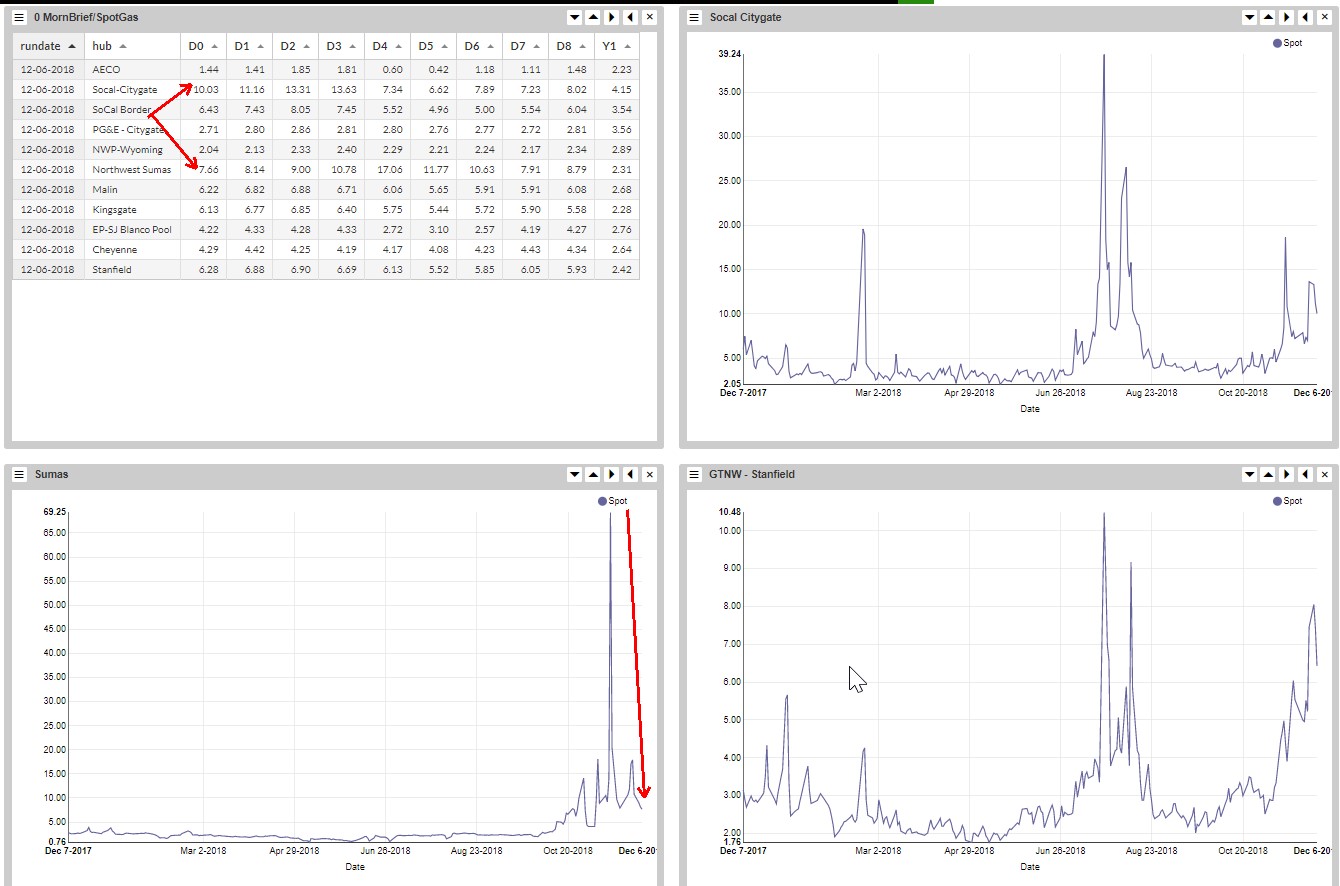 Sumas is now trading at a discount to Socal Citygate with its single digit handle ($7). Term gas, too, came off. 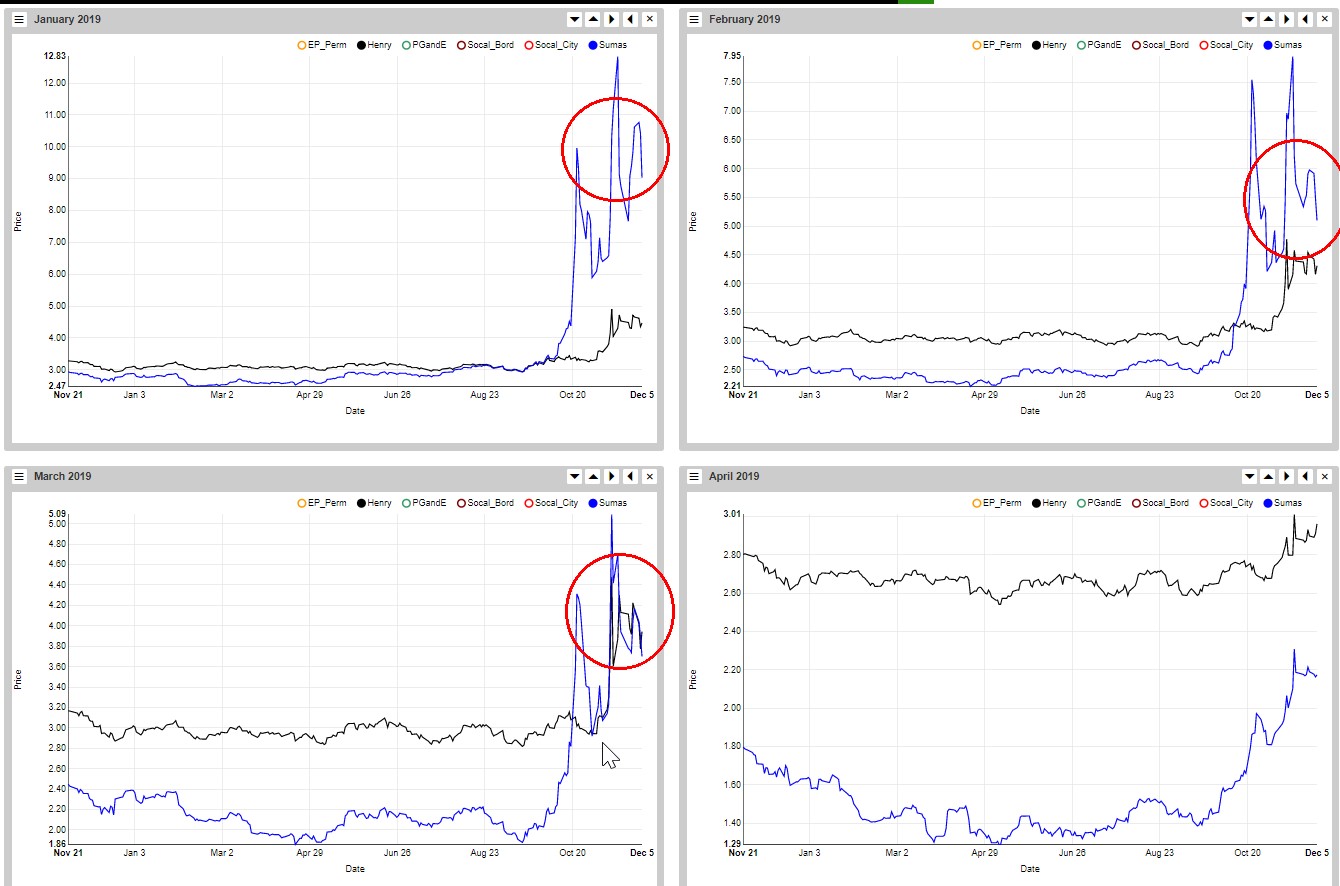 Yet a fat premium remains, one that must be highly at risk should Sumas get its fair share of the Huntingdon rally. Socal is tighter… 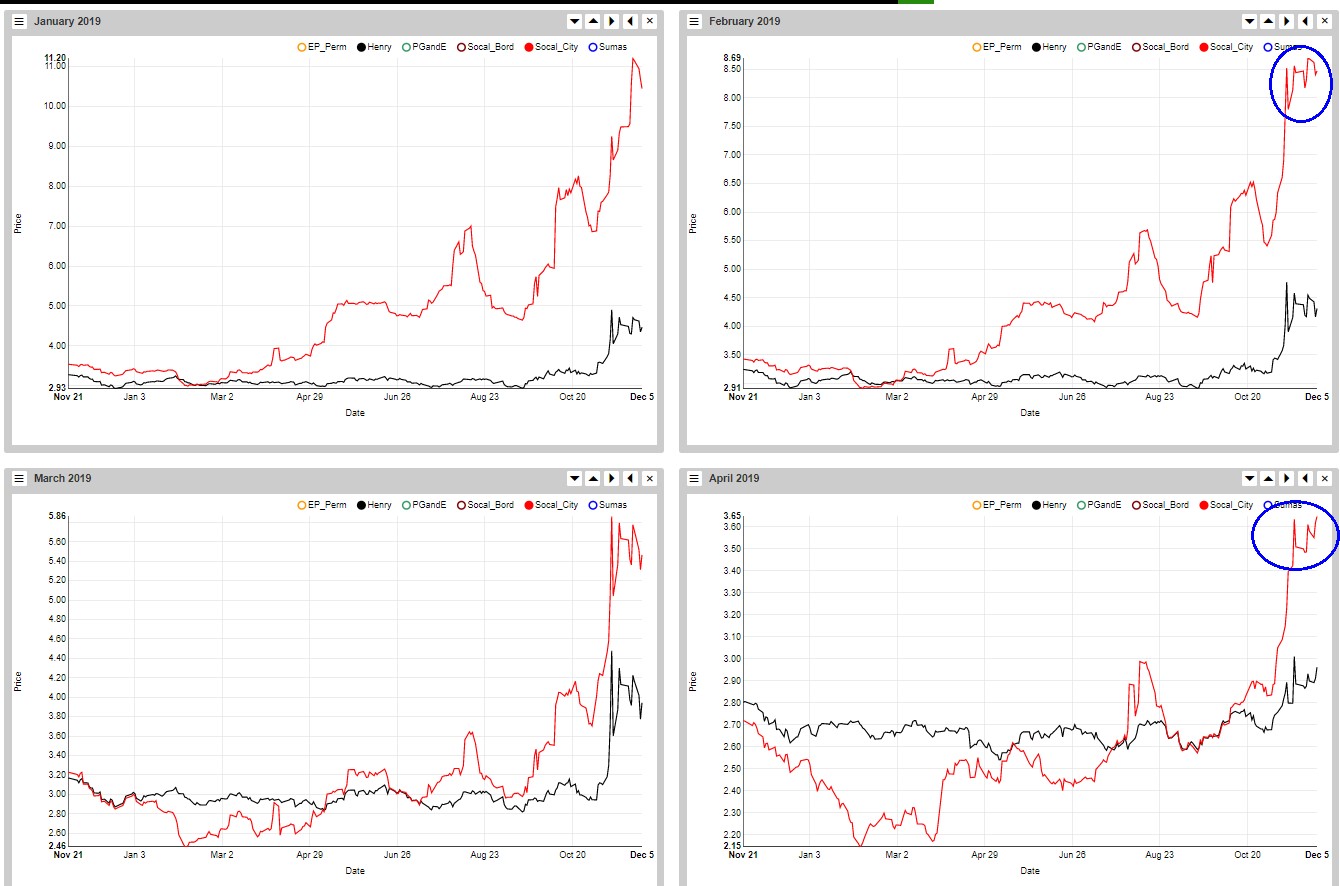 Jan pulled back a bit, but the other bullets either rallied or drifted sideways. Let’s look at supply and demand.

Loads rallied in California, but not anywhere near last winter’s peaks. Equally important and relevant, check out the rallies in supply at both SCG and PG&E all of which speaks to the resiliency of the system. When needed, extra gas is found. 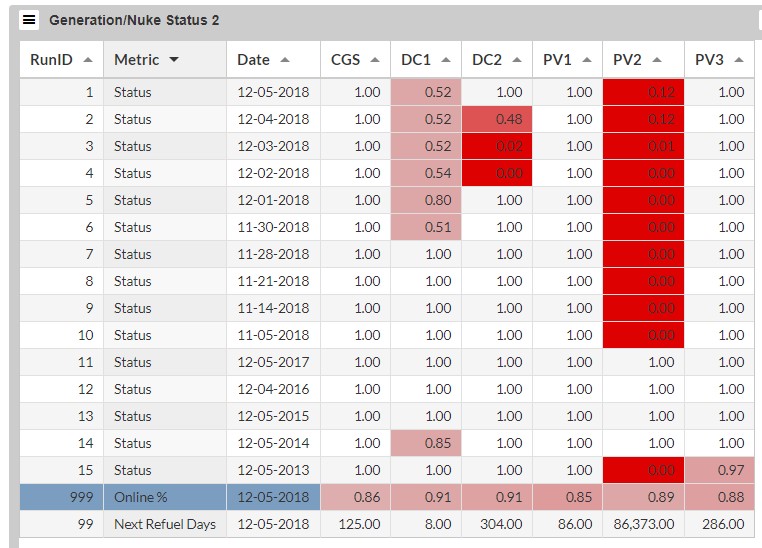 The nukes are in flux; Diablo #2 is back to 100% but #1 remains at 52%, we still think its heading towards refuel next week. Meanwhile, PV#2 is ramping up and should be at 100% by Monday. Not that PV needs PV2, the hub is congesting heavily into SP. Diablo, should it be offline for all of December, is more problematic if another cold snap settles into the Bay Area.

Renewables didn’t help the cause; every reporting hub is off. California’s solar was rained out yesterday, and the Northwest is back to being becalmed.

Finally, let’s look at how much power demand was booked:

Clearly, very bullish in the Northwest and the other hubs also rallied. The fact the DA LMPs came off during the event speaks to the solid supply fundamentals.

A bullet dodged, a hype exposed, and massive term price volatility. With warmer weather, and possibly big rain on the horizon, one can’t help but feel bearish, but that sentiment is best measured relative to the market, so on to that next.