The increases at Station 4 are now cuts and flows south-bound on Westcoast Pipeline are back to post-explosion levels. Not sure if this was test gas or something else, but the cuts were felt all the way through Chehalis. Also noted the Rathdrum Peaker fired up – seems she’s chasing soaring spot gas prices.

Sumas spot just set a possible historical high, topping out at a remarkable (and Citygate-like) high of $18.09. Thanks to power’s dutch auction, Avista can buy the $3.22 Kingsgate and sell at an $18.09 Sumas. 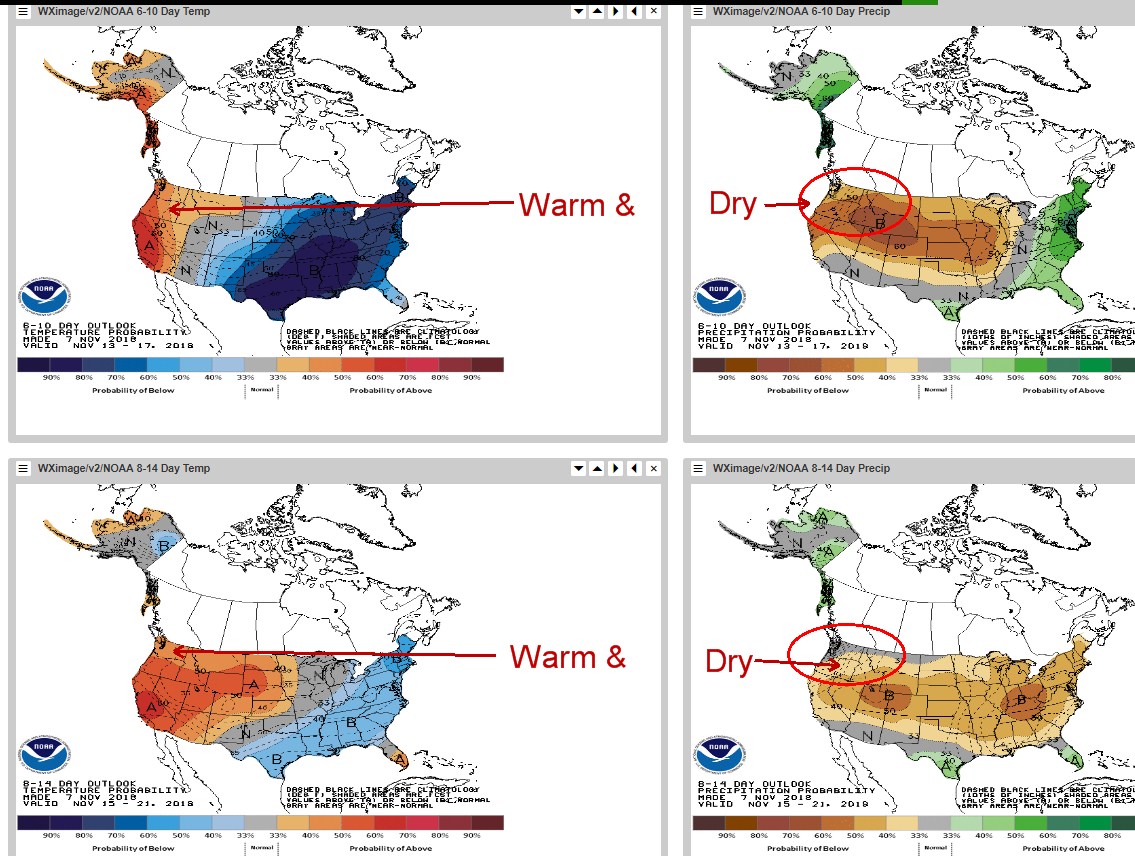 BPA must be laughing every day upon release of NOAA’s 6-14 day outlooks. You couldn’t script a better degree day scenario for a hub missing half its gas. The operative words here are “Warm and Dry.”  Well, BPA smiles at the warm and winces at the dry, to be more exact. The dry is becoming increasingly relevant as the earth approaches its winter solstice. Each day of draught is increasingly more relevant, though one big set of storms will put everything back to normal.

What’s notable in these set of plots isn’t the River Forecast Center’s violent (and irrational) swings up and down, it is Ansergy’s slight moves down. The Ansergy Water Supply volatility will pick up over the next few weeks as we move into the more heavily weighted Water Year Days of November and December. For now, the outlook is slightly below average. Another fear, empty reservoirs. 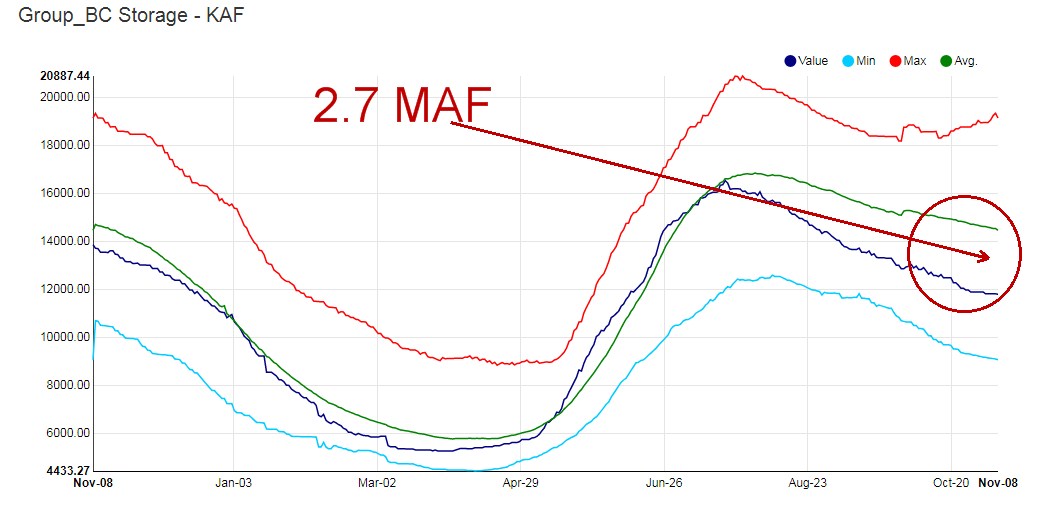 That BC hole may explain the province’s proclivity towards importing US power. 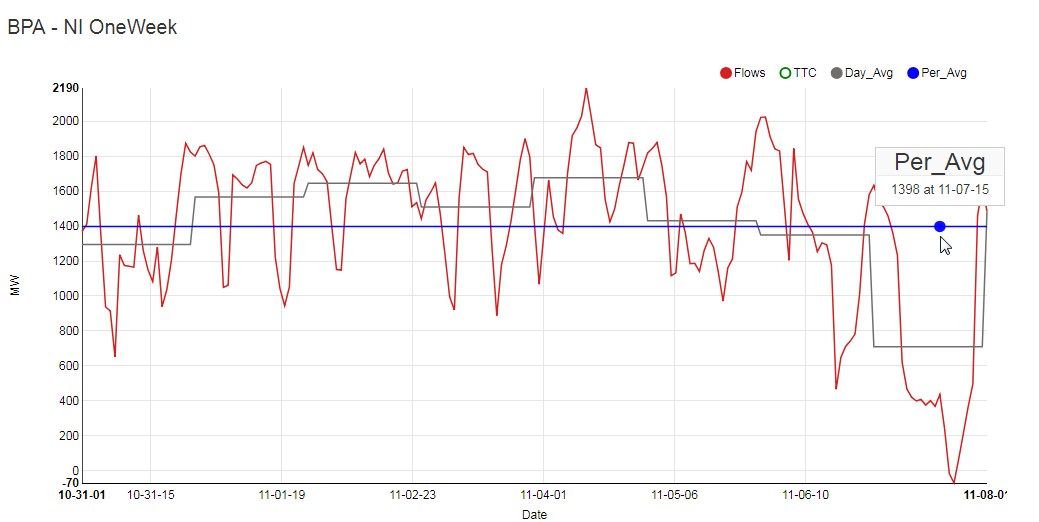 1400 aMW has flowed northbound over the last seven days, a ten-year high.

A few other notable highs and lows are :

The spread to Palo has blown out, now SP congests in every hour; last month it was just the solar ramp, now all day long. And this is while the nuke is in refuel; what happens to these spreads when PV adds another 1200 aMW of baseload energy?

Loads are ticking up across all four hubs, week-on-week. Surprising, given the bearish weather of late. 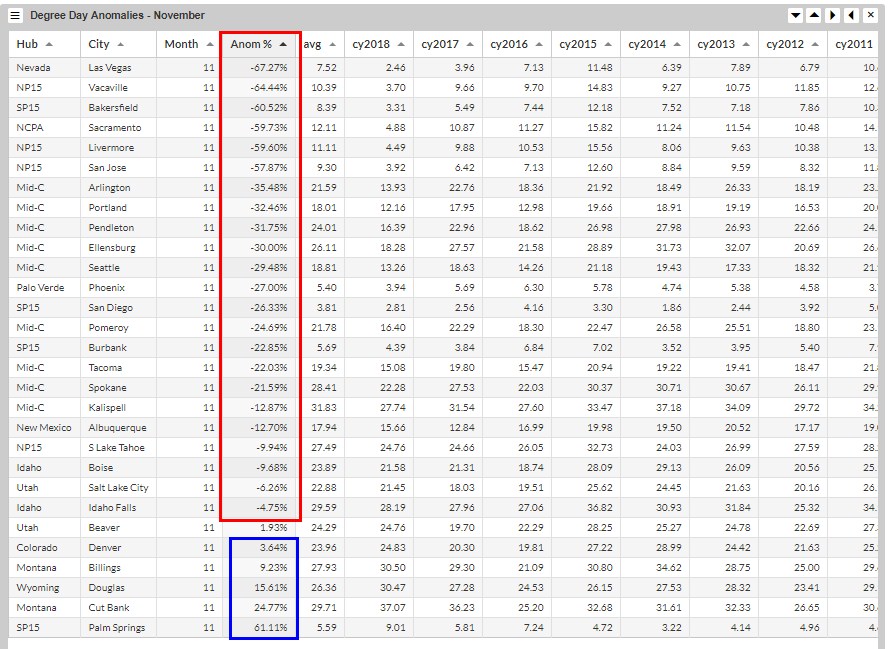 Just how bearish? Look above and answer your question. Only Palm Springs, Douglas, WY and Cut Bank, MT posted significant positive degree-day anomalies for month-to-date. Load-center cities are way in the red. 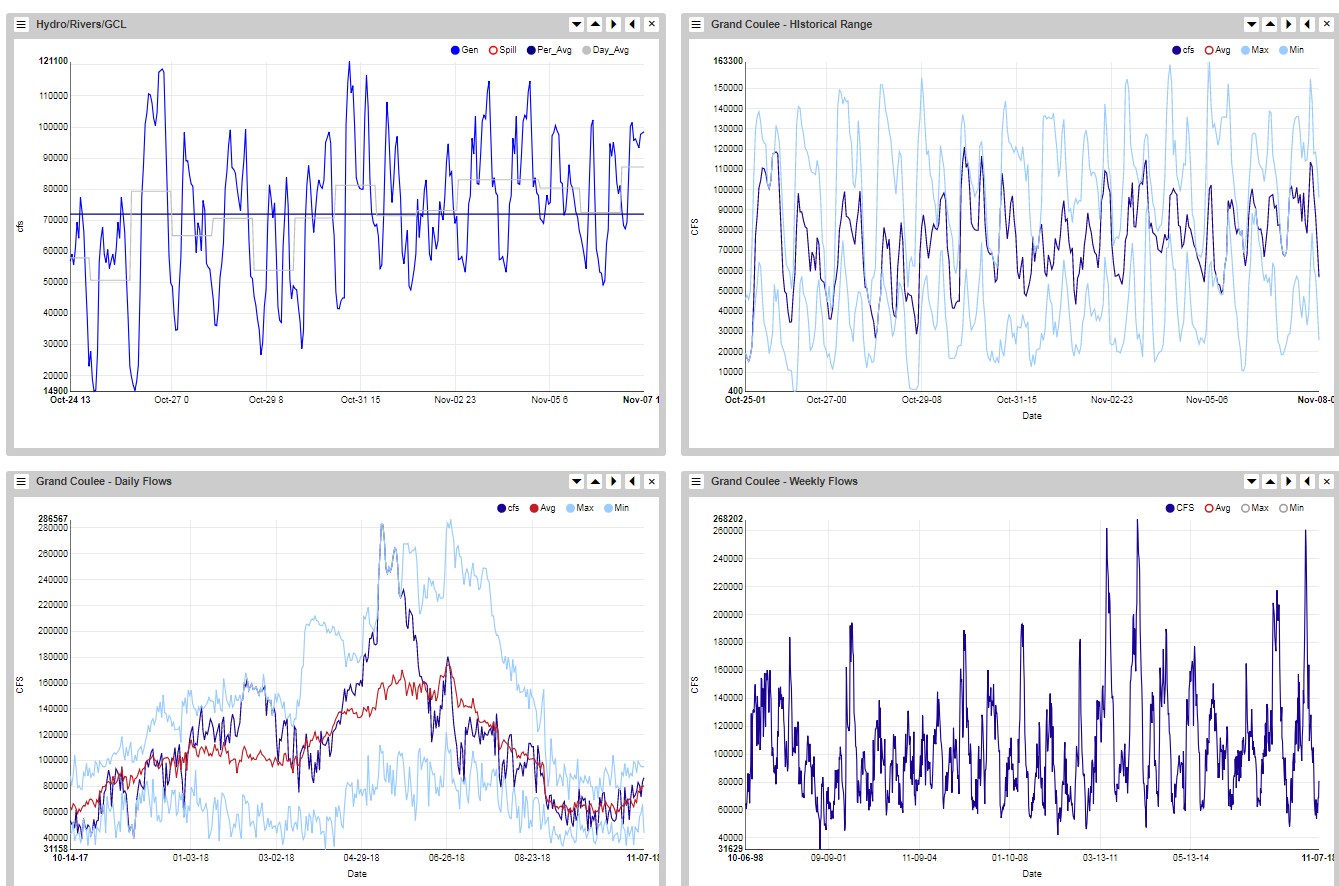 This is a new dashboard which incorporates our new River Reports. The first chart is the same as old; it plots hourly discharge through Coulee’s turbines (QG). The next is what we call the “Range” report as it shows current flows as compared to the 12-year highs and lows. The third is the daily average flows for the last year bracketed by 12-year highs and lows (daily averages). The last chart plots a twelve year weekly average. You can create the same for over 100 rivers. 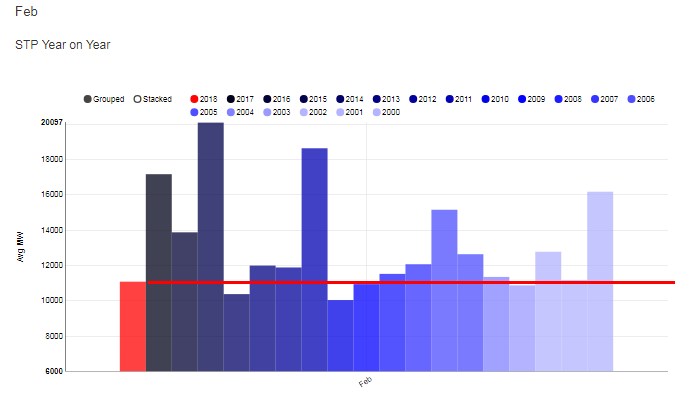 A brief comment on Monday’s STP is warranted. The NWRFC made massive cuts to February which now sets WY19 to be one of the lowest on record. And we don’t disagree with our friends in Portland on this one, but two weeks earlier was a different story. That forecast was two gigs higher than Monday’s and made no sense. 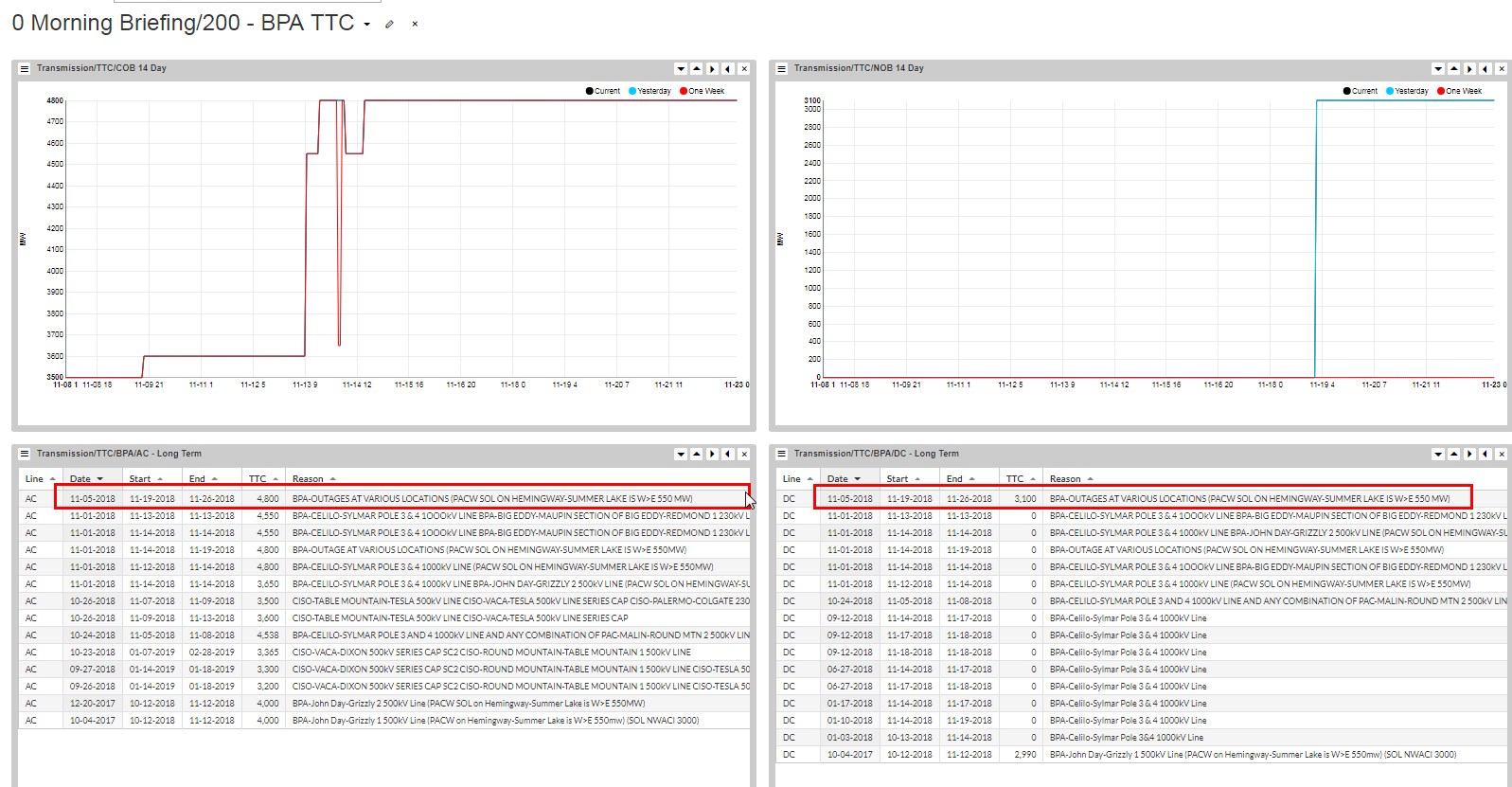 Both the DC and AC are back to full capacity on Nov 19, just eleven days from now. Not sure how much energy will flow south-bound, however. Not sure NP15 (or SP15) has much of an appetite for $18 Sumas gas.

BC has been an importing machine, but those levels have trailed off over the last couple of days. Speaking of trailing off, check out those flows to NP15 on the AC, almost down to zero. Meanwhile, the Palo line’s TTC is oscillating like Grand Coulee’s discharge. Maybe bad data?

Very bearish temperature outlooks but the cloud on that outlook is the dearth of clouds. Clouds that bring precipitation, there are none. As this pattern holds, both California and the Northwest are increasingly looking at very dry years; all the while, each region has gas problems. Not a time I’d be wildly short, way too much uncertainty. More on that in the APT post to follow.