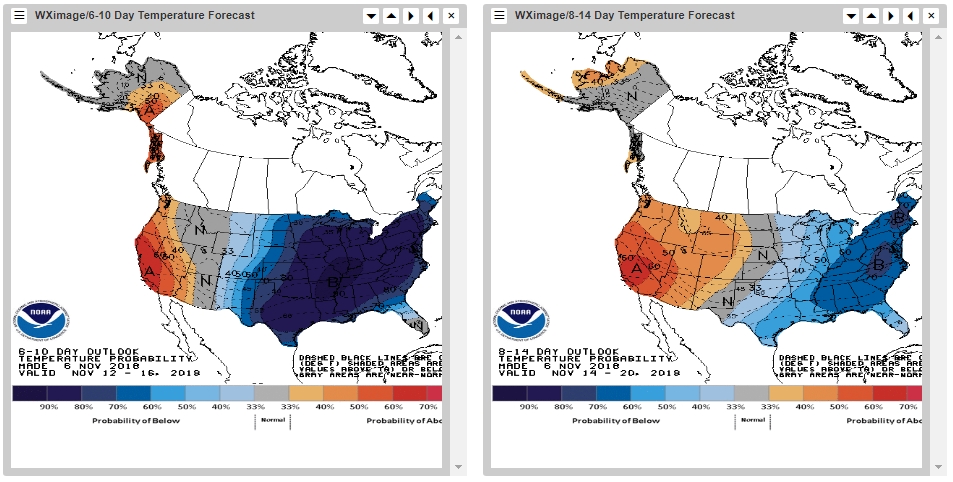 The Rockies are doing their best to hold off a dramatic cool front that’s enveloped 2/3 of the country, but if the second-half of the 2-week forecast holds true, we should expect most of the WECC to stay in the normal range at the coolest.  Southern California is on an island with its warmer than normal forecast in both weeks. 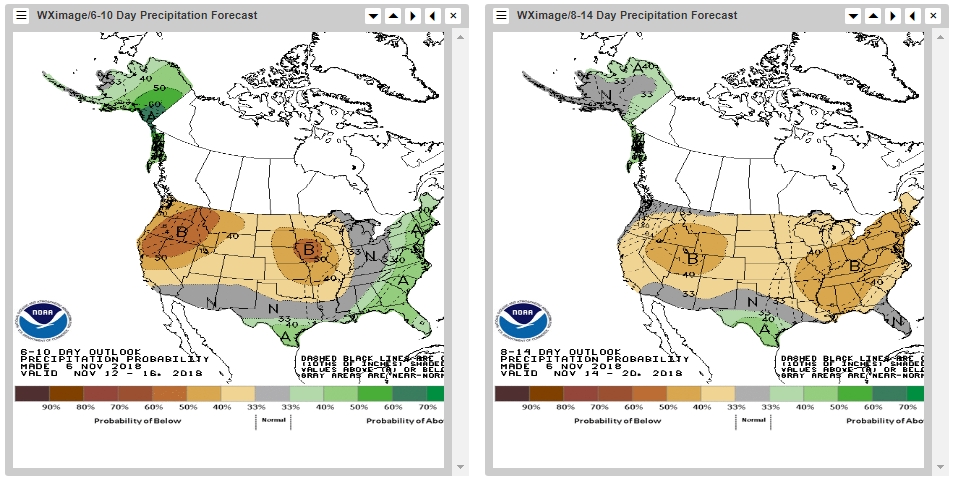 Cool, warm, it doesn’t matter when it comes to precip as the forecast is calling for a dearth of rain, at least in terms of percent of average, for the entirety of the WECC.

The SP-PV day ahead spreads peaked at a massive $27 on the 5th but narrowed to $4 on the 6th.  SP-NP showed a difference of $4 and $2 on those same days, respectively. 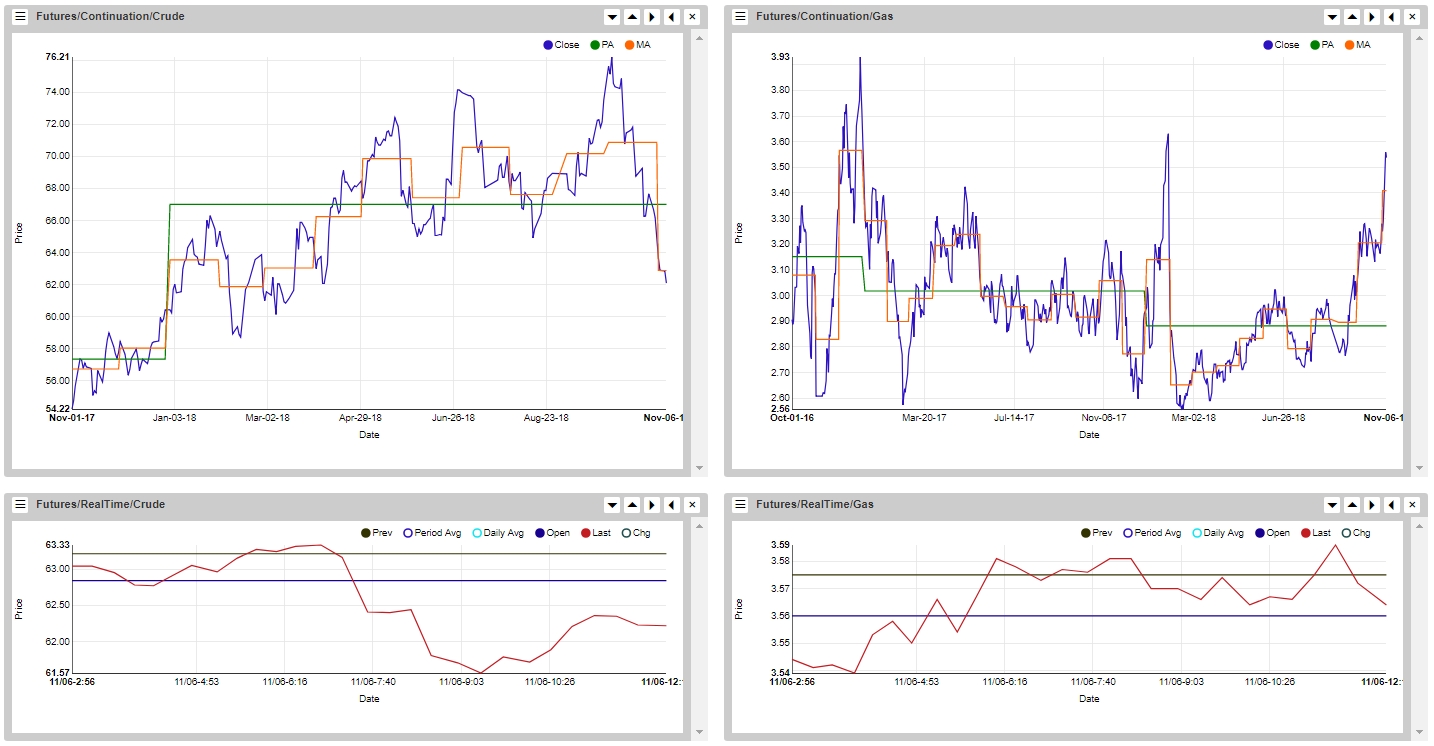 December Sumas is staying on its erratic and mostly unpredictable course following a $1.25 rise over the past three days.  That comes off the back of what had been the lowest price since the early stage of the Enbridge explosion at $7.16.  April and July appear stable for Sumas, though July is beginning to rise for Socal Citygate. 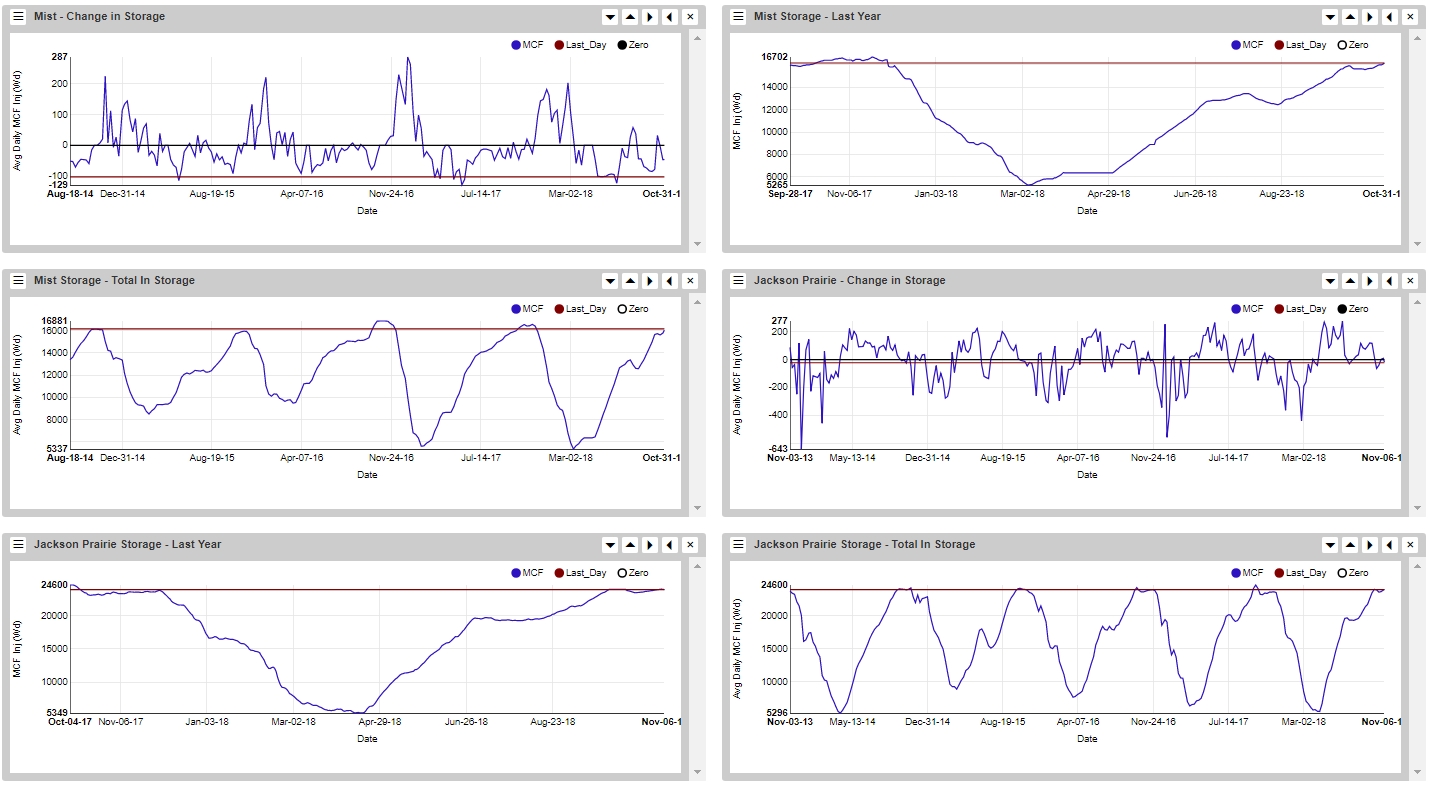 Jackson Prairie made a small climb to 9 MMCF on the 3rd, the first positive storage number in several weeks, but has since fallen back below 0. 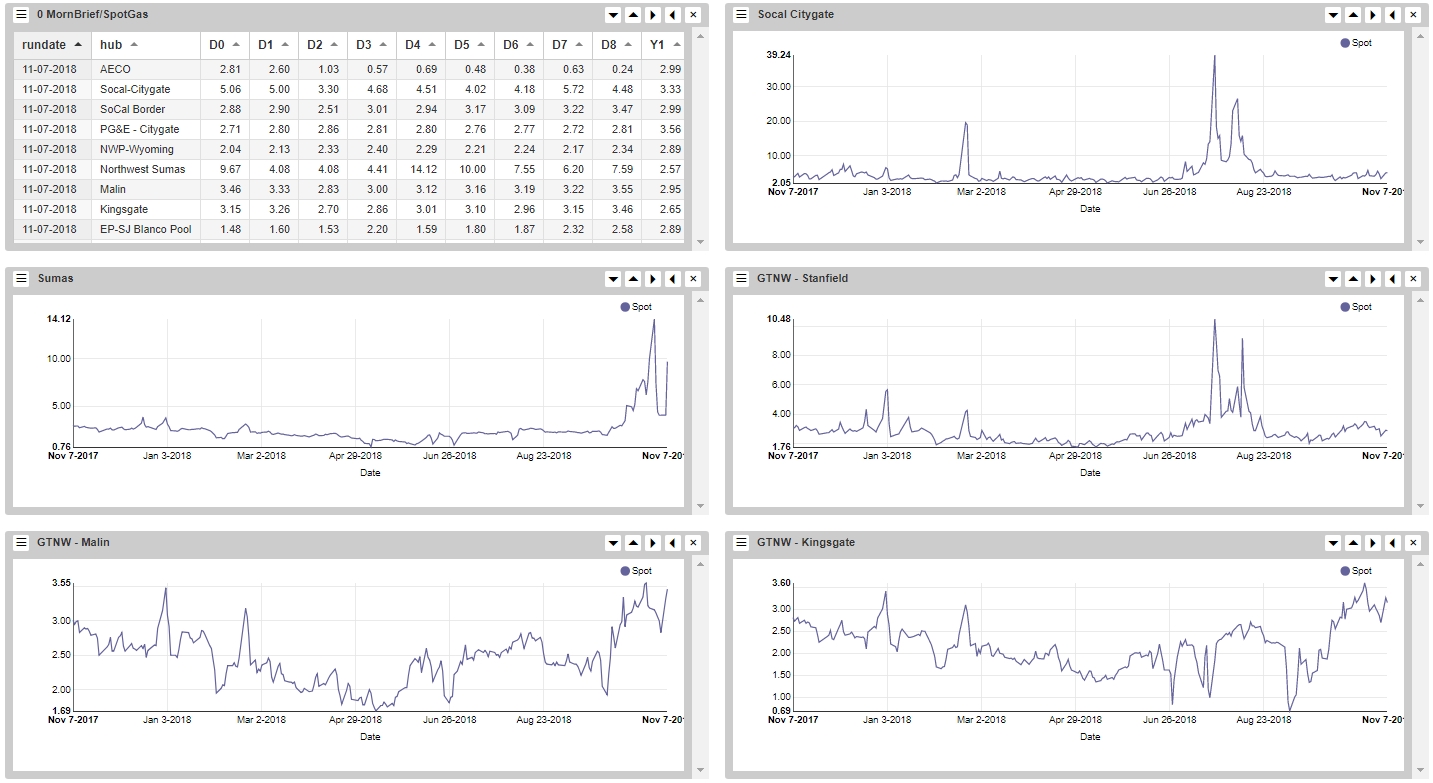 AECO has more than quadrupled over the past three days and now sits at $2.81, compare that to $0.57 from Saturday.  Sumas more than doubled overnight after settling at $9.67 compared to $4.08 the day before. 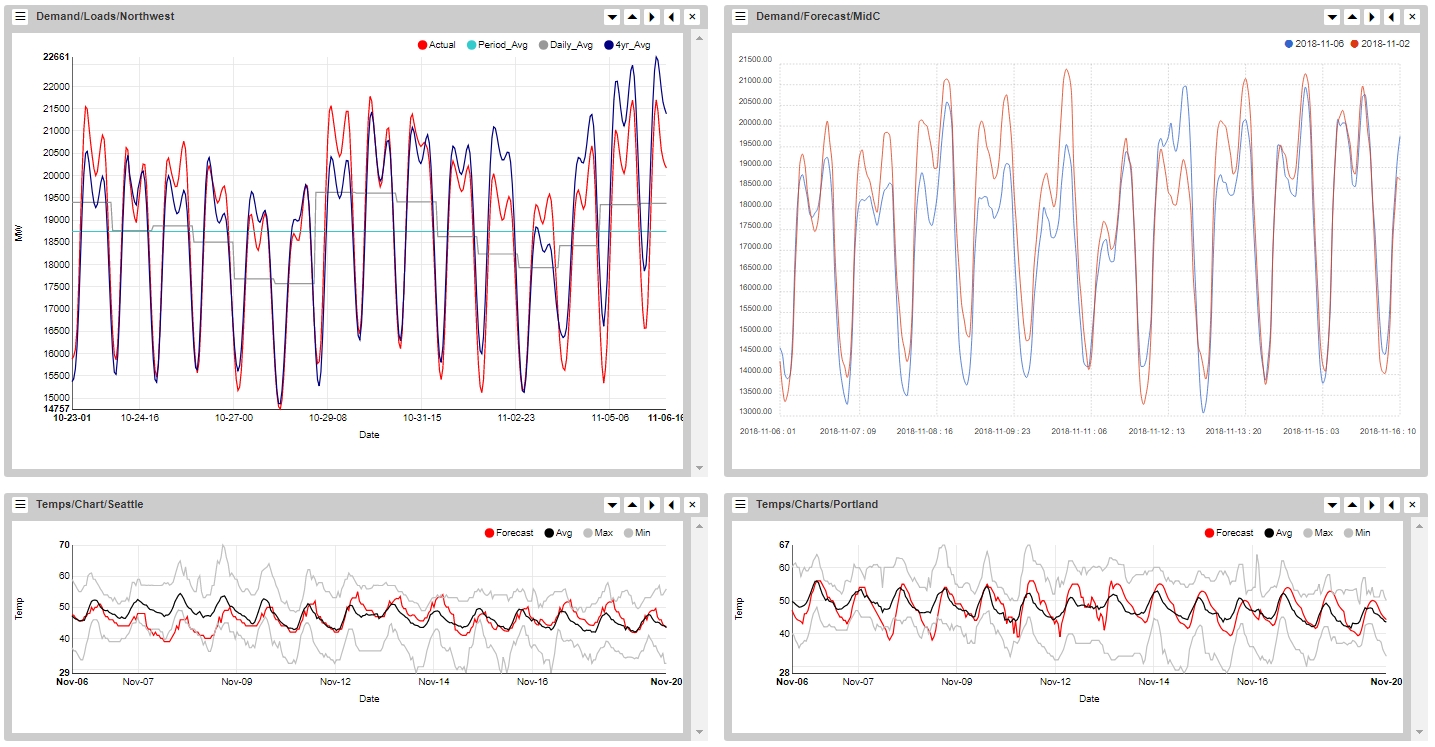 Seattle is projecting overnight lows tonight at eight degrees below normal, and tomorrow high to come up seven degrees below average.  The following two days appear to climb back to normal before a very slight warm spell approaches.

Peak loads in Mid-C made a moderate increase of 600 MW yesterday, but the main story was in overnight loads as the low jumped 1,200 MW day-on-day.

No doubt Northern California is exempt from the Eastern-half’s sudden chill as San Jose projects highs above normal throughout the remainder of the two-week forecast.  Today calls for a high of 76, eight above normal, while lows should maintain a 50-degree floor.  Sacramento shows much of the same with daily highs in the mid-70s to round out the week. 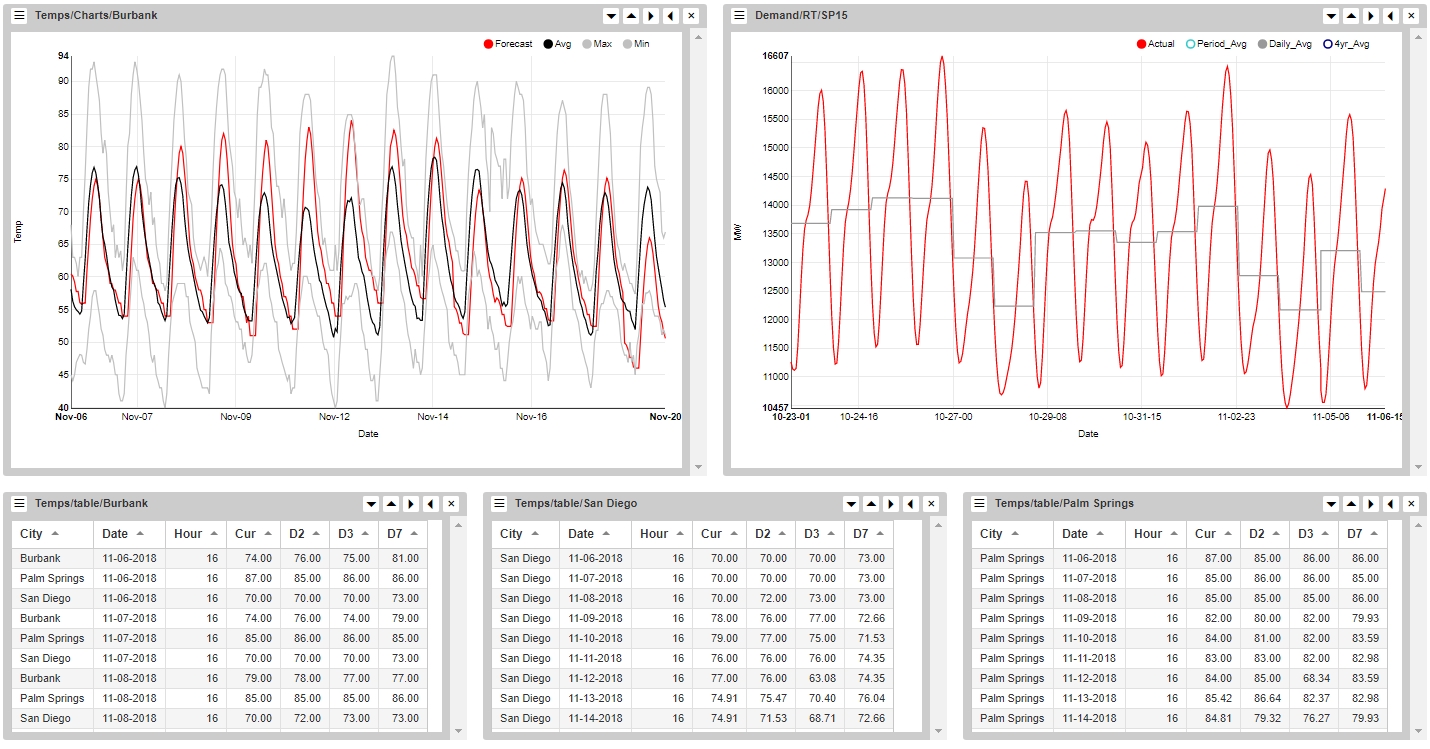 Look for Burbank to get progressively warmer leading into the weekend, eventually welcoming a high of 84 by the 12th, as impressive 12 degrees above normal.  We aren’t seeing as much anomaly in daily lows, however, as most days hug the average line tightly.

Phoenix is projecting very mild temps, some even below normal albeit remaining in the mid-70s.  Just two days over the next 14 are projected in the 80’s.

Vegas is even cooler as the 8th and 9th mark highs in the 60s. 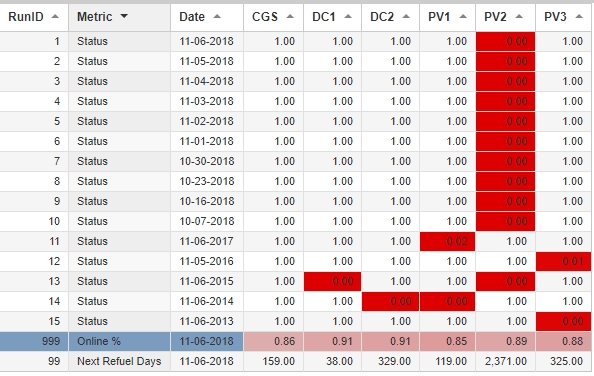 Mid-C wind peaked at 2,700 MW on the 2nd but has seen a sharp decline day-on-day ever since, though it remains well above 1,000 MW in nearly all hours. 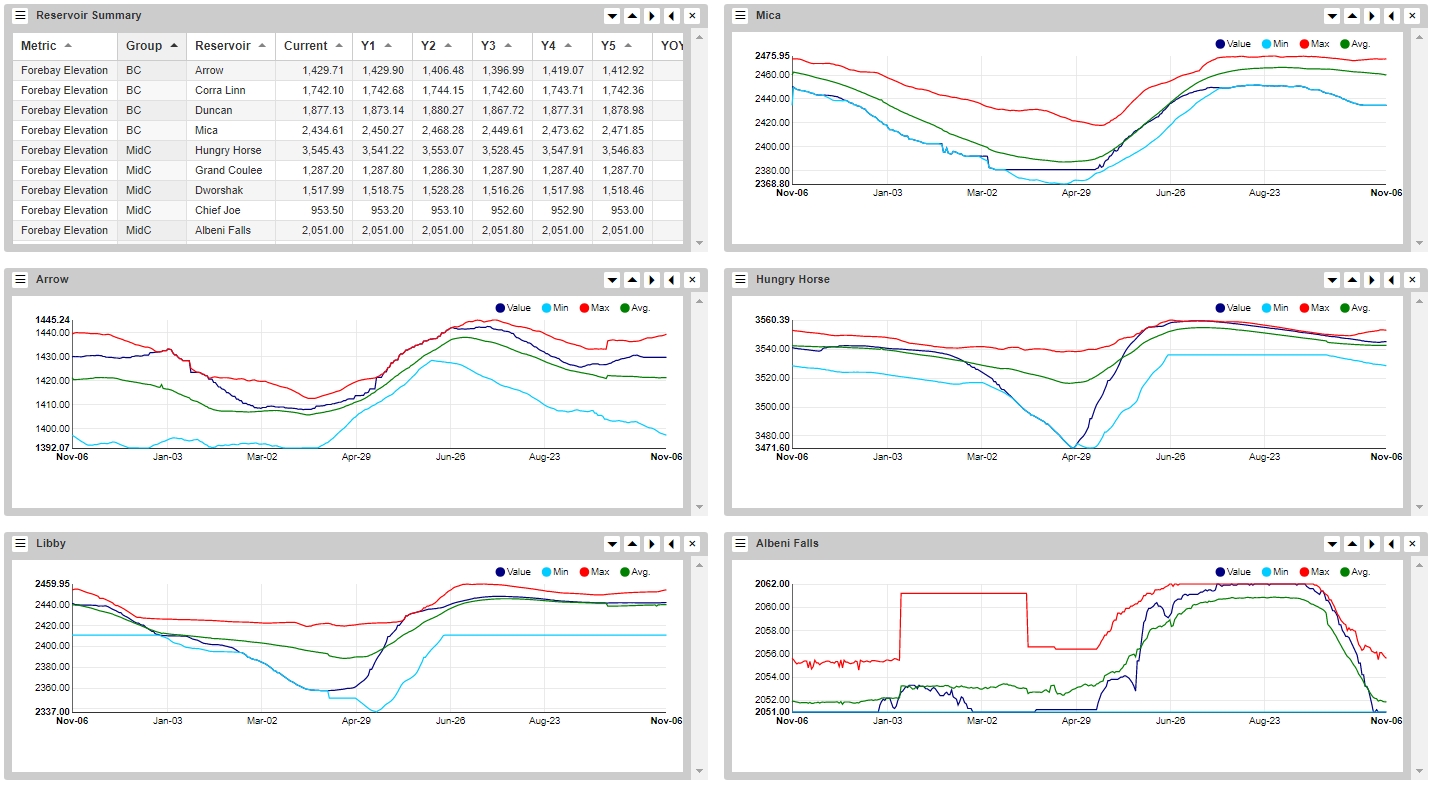 Albeni Falls remains a foot under average and continues to set a new 10-year low for elevation on this date.

Cooler weather and measurable precipitation led to a decent amount of snow in the Rockies and Washington’s Cascades.  BC added to its early-season snowpack as well, and Montana shows much of its stations above the 110% mark in early results. 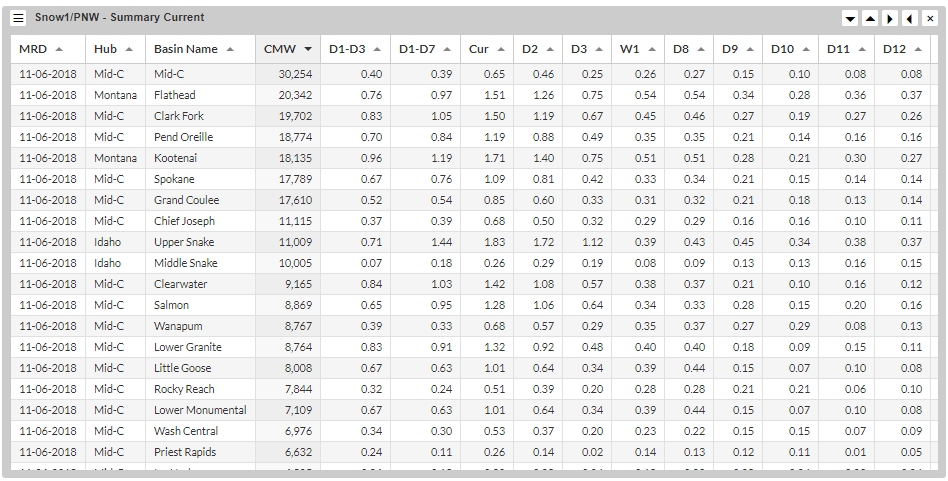 Clark Fork, Upper Snake, Kootenai, and Clearwater all generated more than an inch in snow build over last week, though Kootenai saw most of that over just the last three days.

Note the first signs of NOBs return, currently scheduled for the first hour on the 19th.

Very subtle changes to the COI line as there are a scattered few hours on the 13th and 14th with week-on-week differences, otherwise everything is moving forward as shown last week.