Let’s lead with the weather which is suggesting a Massive Blue Wave hitting the US heartland. 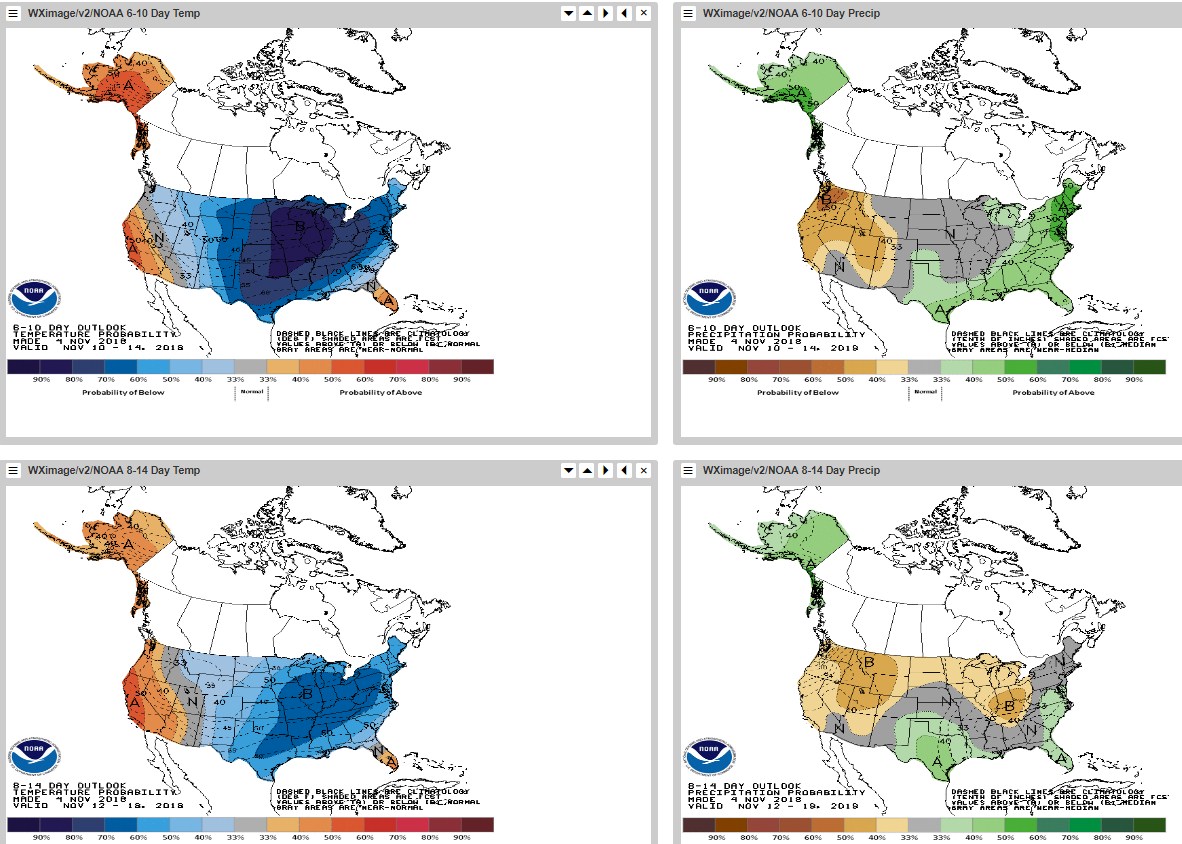 Big bluish-black blob parked across the mid-west and spilling into the PJM, NY pool, and NEISO but, alas, mostly bypassing the WECC.  That wasn’t the case on Saturday, NOAA had some of that blue in the Northwest. 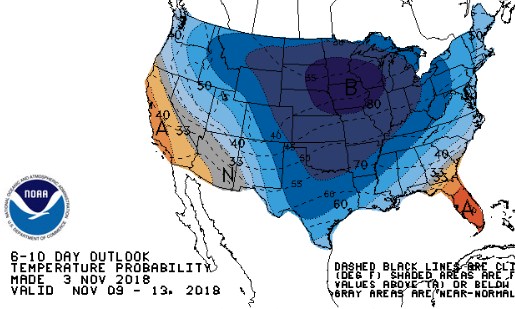 All of which suggests the pattern is volatile and could shift again. How crazy would that get if that dark blue was sitting atop Seattle/Portland? Right now it’s not, but the chances are non-zero, and we’d be cautiously bullish until we know for sure this isn’t shifting west.

Meanwhile, there is Enbridge; we know the pipe is returning to 80% pressure and we know that will take place in the next few days but to date, we see no sign of changes in gas flows.

We saw slight upticks of flows passing through the Chehalis compressor but only because Puget Sound’s demand fell – flows at Sumas are mostly unchanged. All I-5 turbines are idle thanks to low demand, highish hydro, and massive wind. Check out the MidC’s L&R: 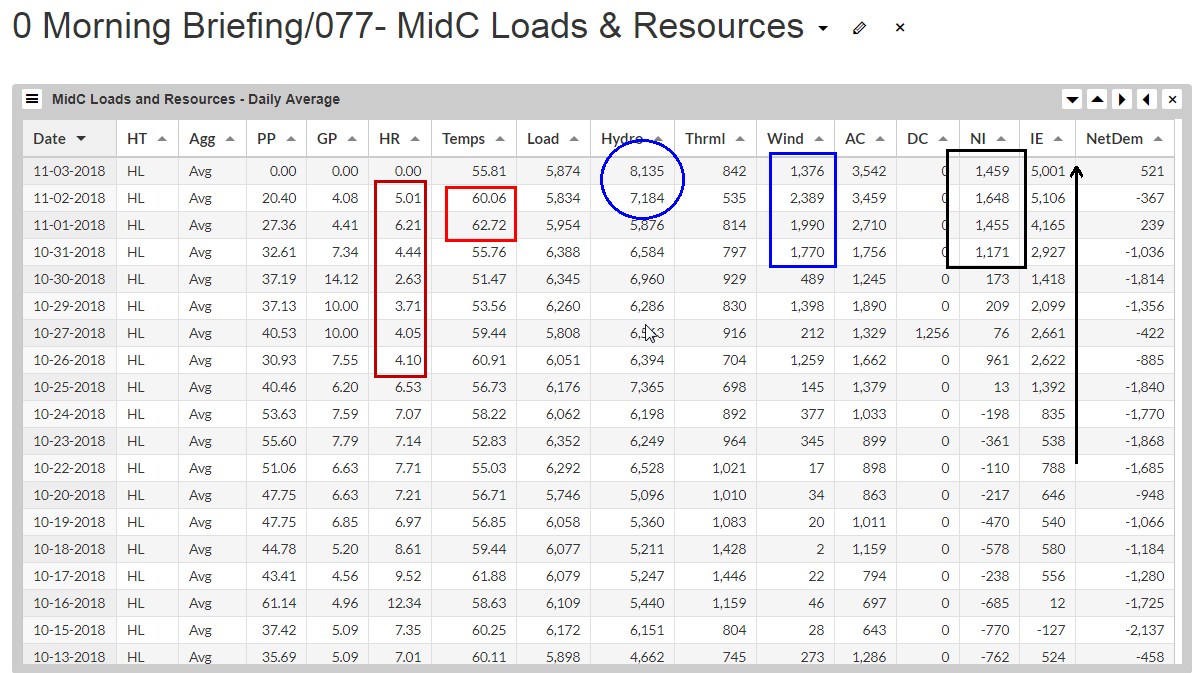 The MidC heat rates over the last week are SP-esque and hydro surged. But perhaps most bearish is the reversal in the wind; the MidC realized its greatest four day total in months. Offsetting these bearish factors are exports out of the MidC; it seems the hub is awash in energy and begging for buyers. Not what we expected a few weeks ago, then the fear was rolling blackouts, and now we fear rolling genco bankruptcies from these miserly heat rates.

With weak demand comes a Sumas pullback, the spot has cratered; even Socal Citygate took a dive. The market is confused, going out on Friday it priced Malin over PG&E citygate. Weird, because PG&E is short storage, shorter than they’ve been for a few years. 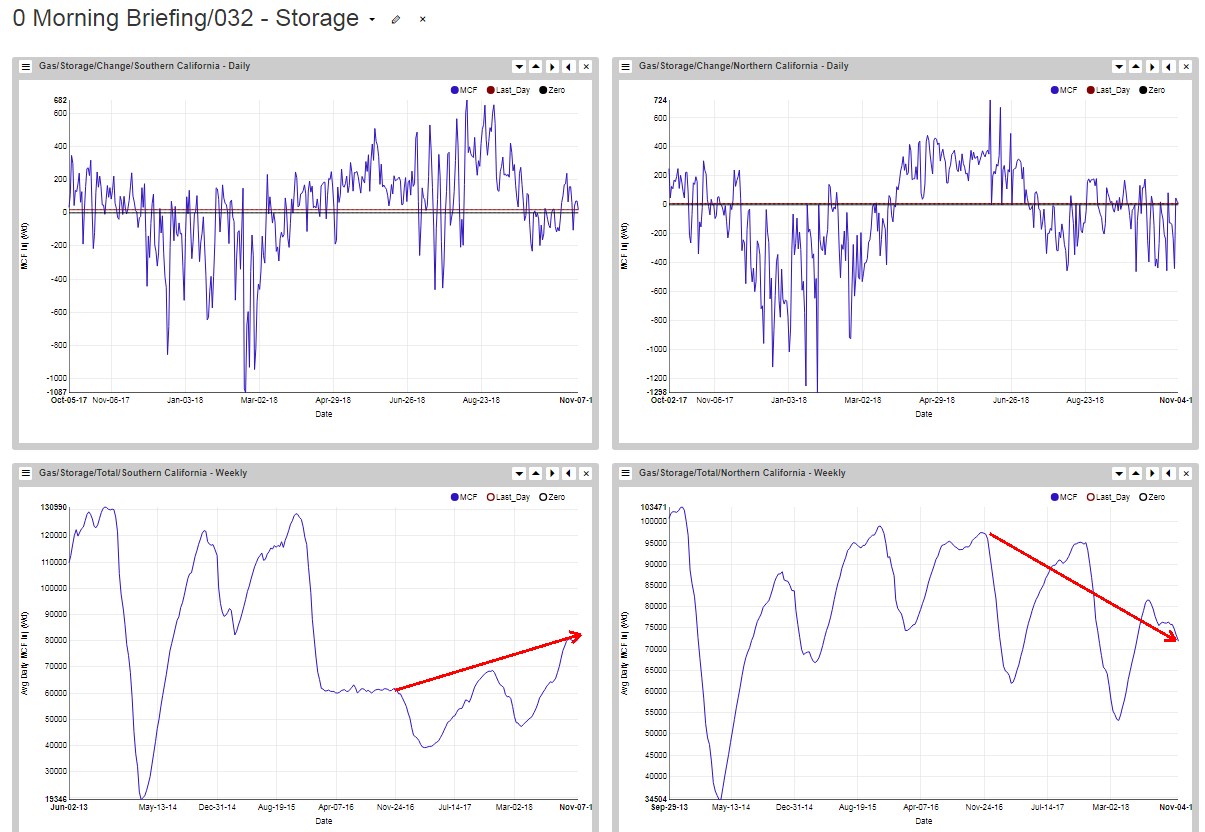 Short at PG&E but a post-Aliso high at Socal and that hub’s prices are reflecting this gas largesse.

The Citygate has been correcting for a few weeks; the gas is starting to look reasonably priced. It’s almost like the Enbridge news just made Socal more bearish, but we don’t think either hub is out of the Winter woods, not just yet. Perhaps these pullbacks are an opportunity to cover shorts or build a winter long lottery ticket? 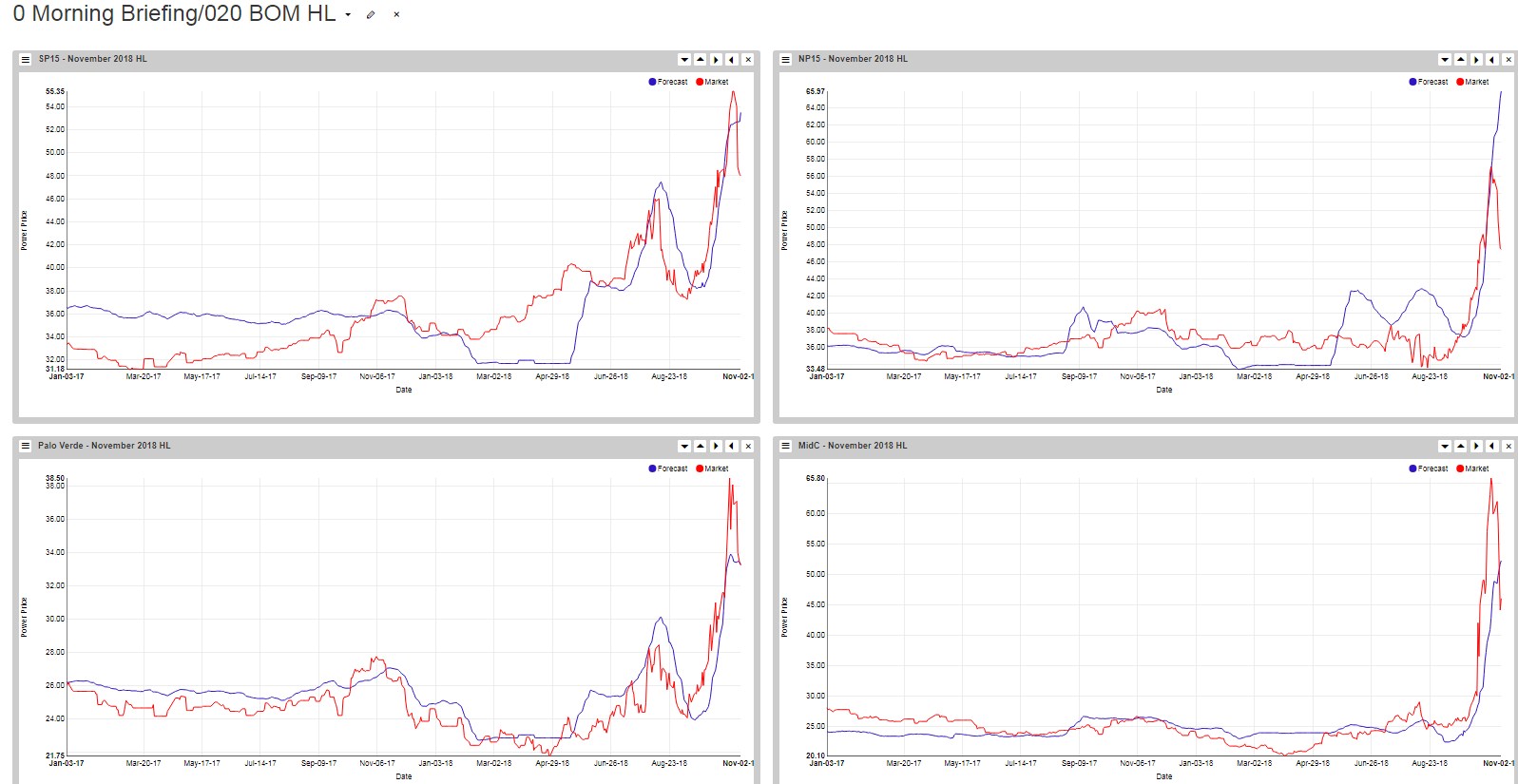 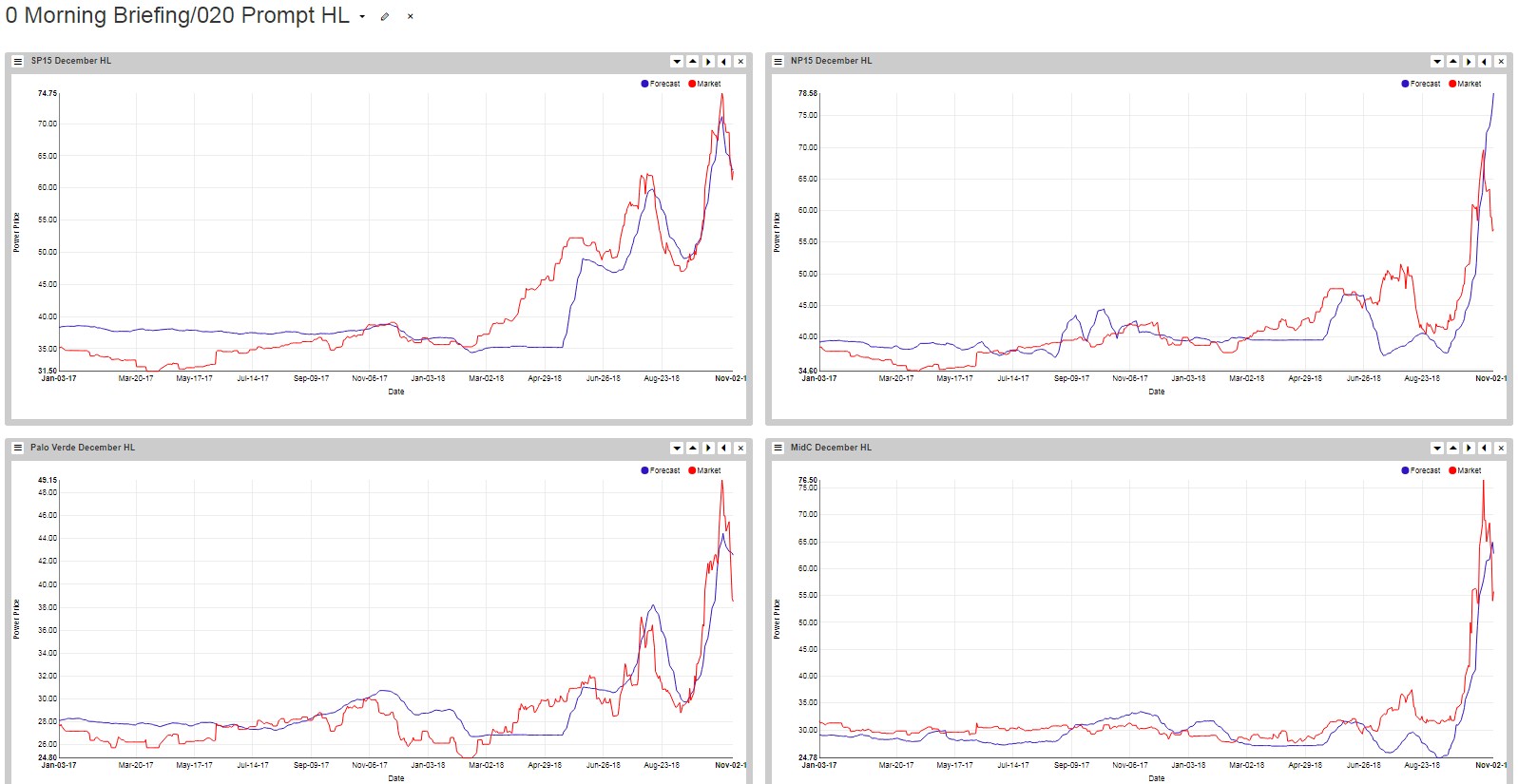 Like gas, the near-term power markets are dropping and, at some point lower, they become compelling buys since we still haven’t had a winter test, not even close. That will come, it might come soon, and length will pay. 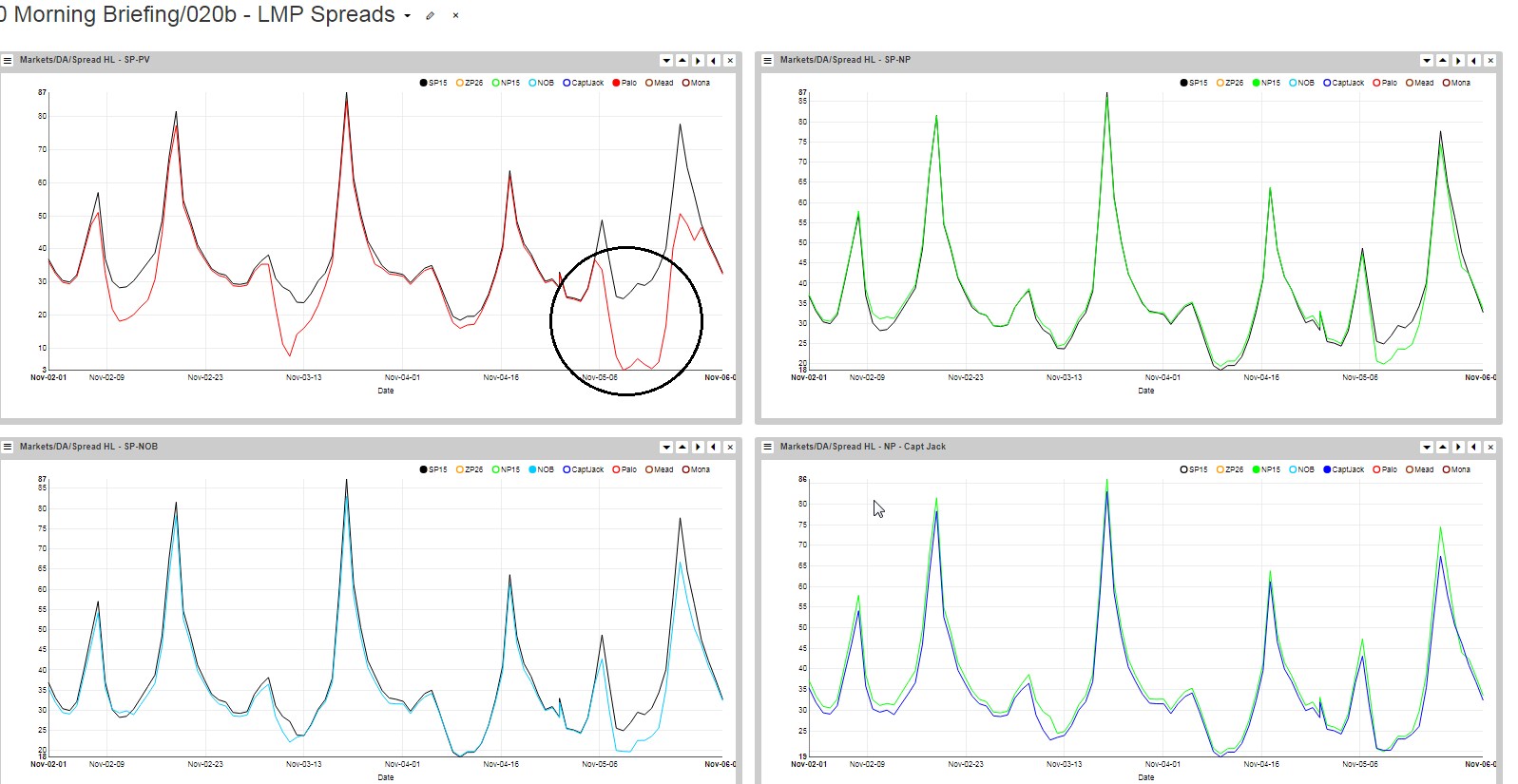 Palo congested massively to SP yesterday in the DA LMP market but no other spread separated too much or at all. 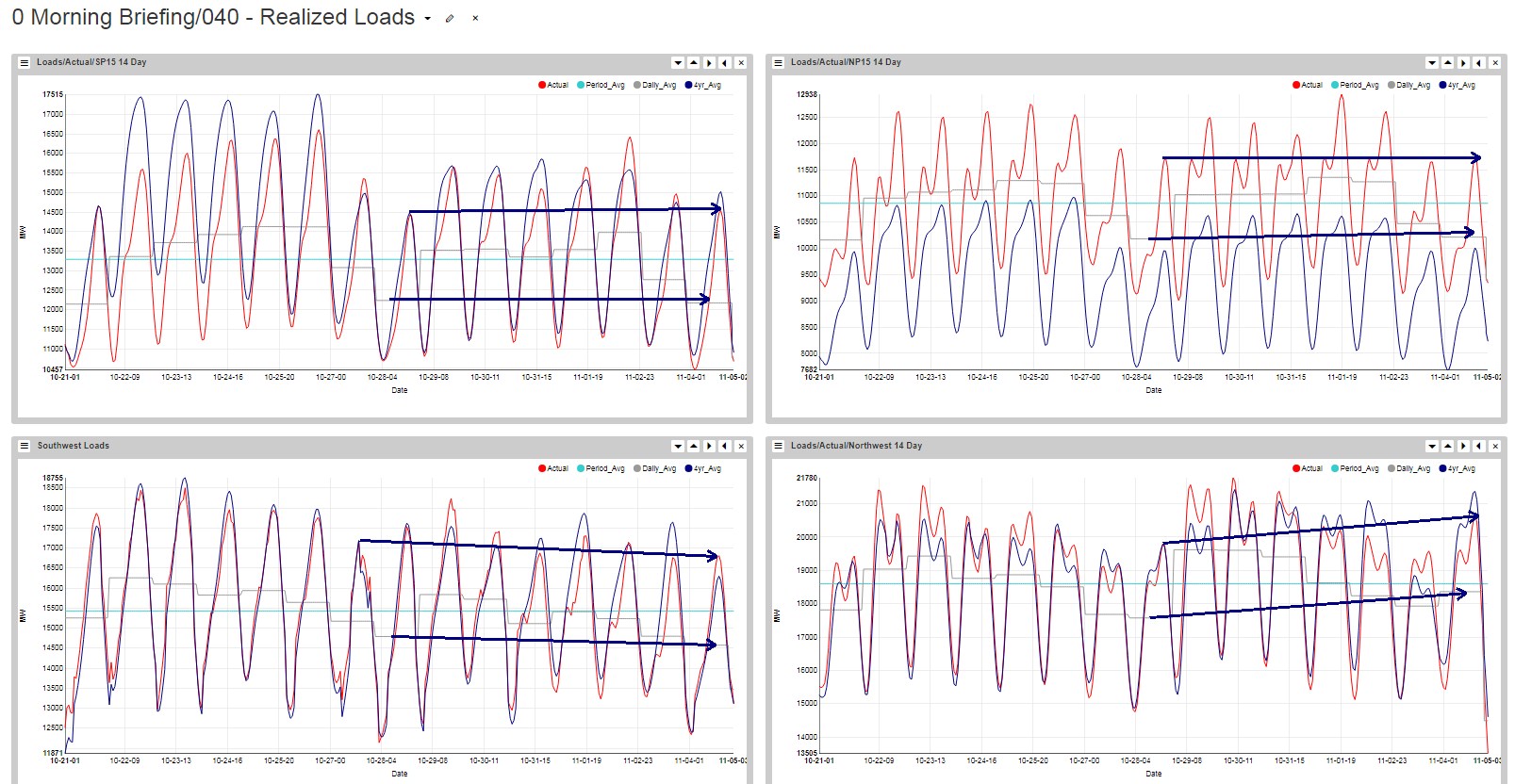 Loads were sideways, week-on-week except at the MidC which saw its Sunday loads rally. That is just the start; the MidC is going to see peak loads up about 4000 MWs over the next ten days. 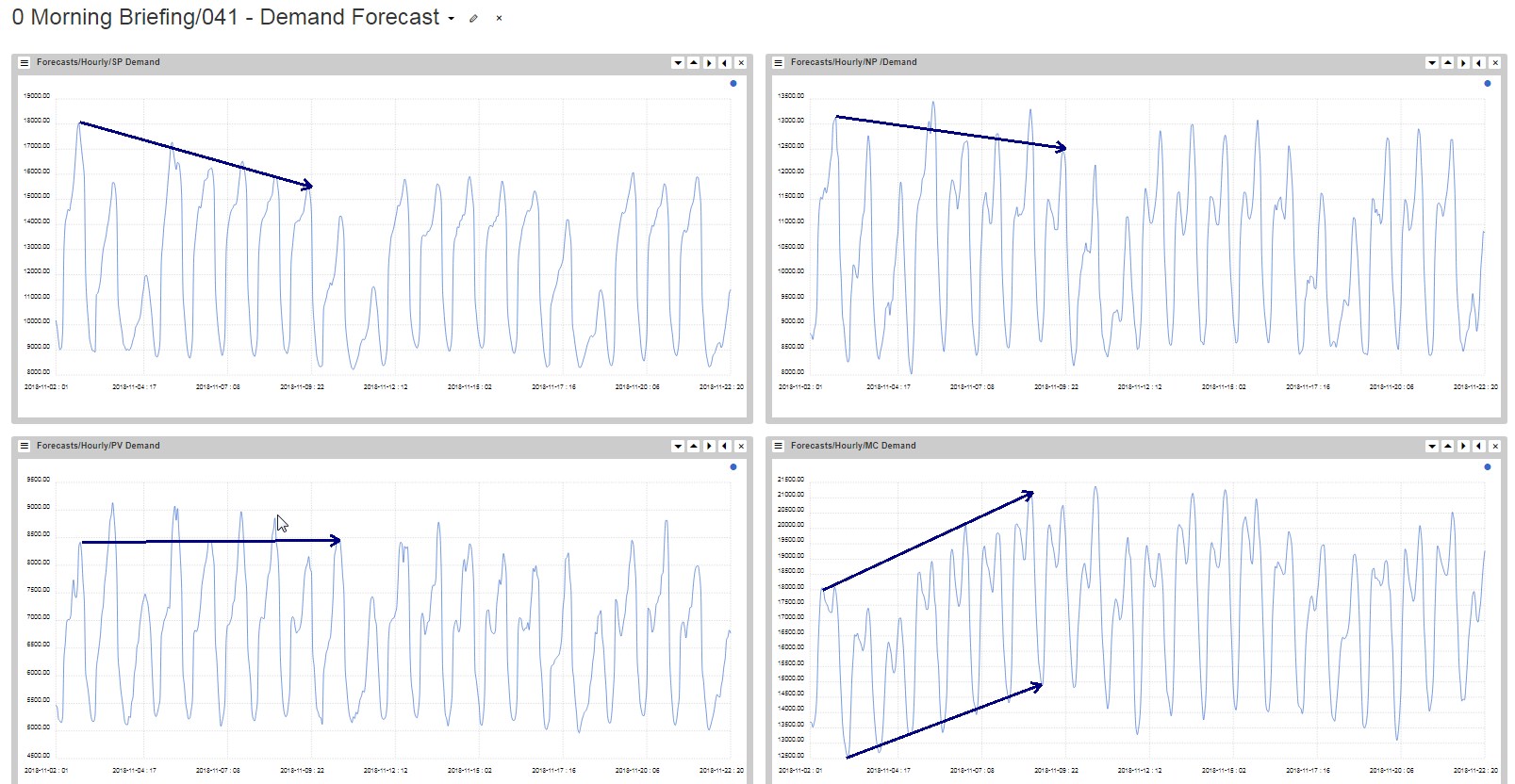 Maybe MidC goes up, but the other hubs are either sideways or down. Just imagine the dark blue shifts west 1000 miles.

Since it isn’t raining its all about temperature and since it’s November it’s all about minimums. Check out those current Mins versus the ten-year lows. That light blue line is where we’d see current temps if the Blue Wave shifted west but it hasn’t and we see twenty-degree min deltas. We did note Burbank is flirting with a ten-year low in the low forties. 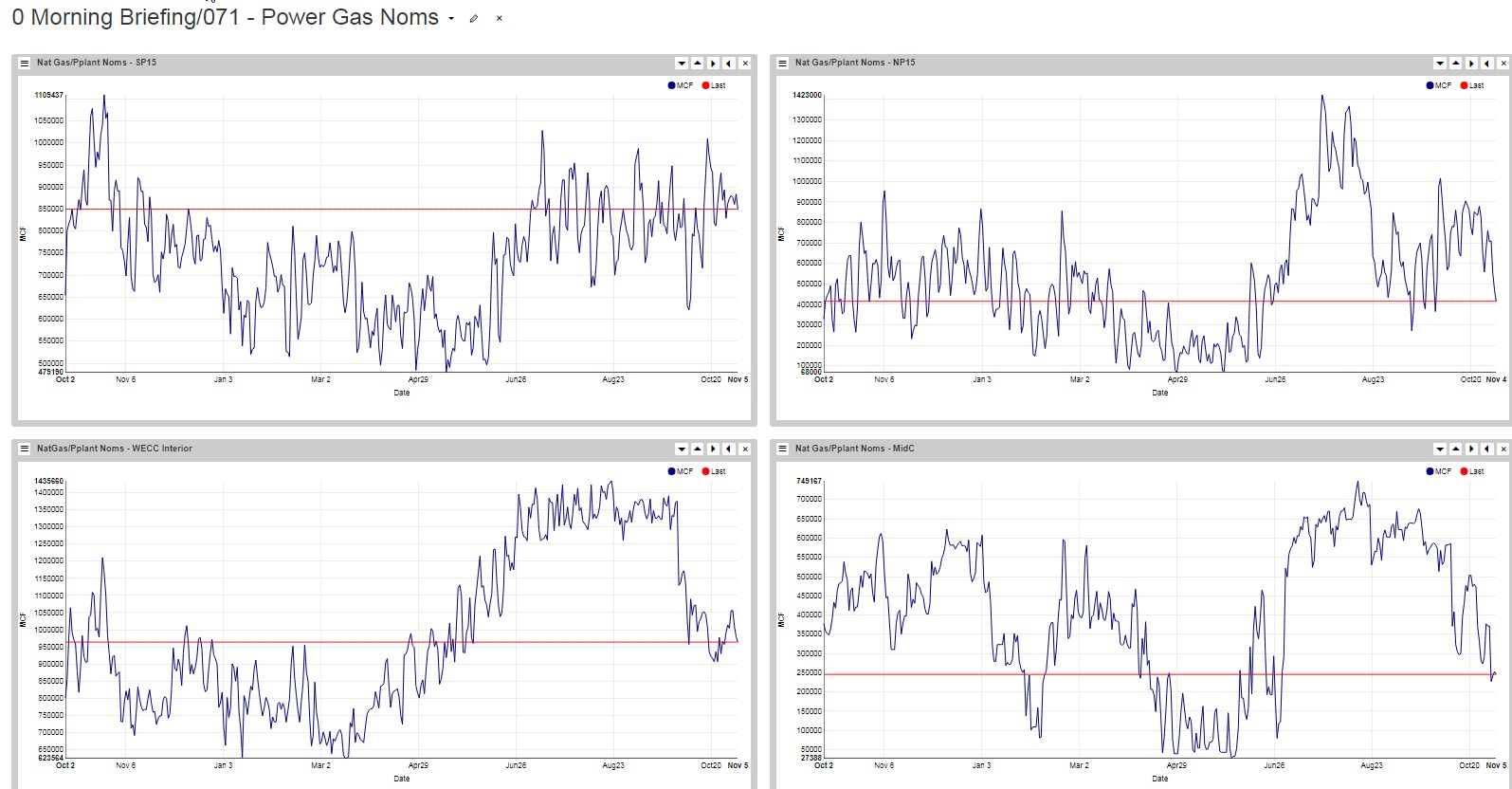 Noms for power plants are weak as to be expected. The MidC is approaching runoff levels, short-lived because its load is set to rally hard. 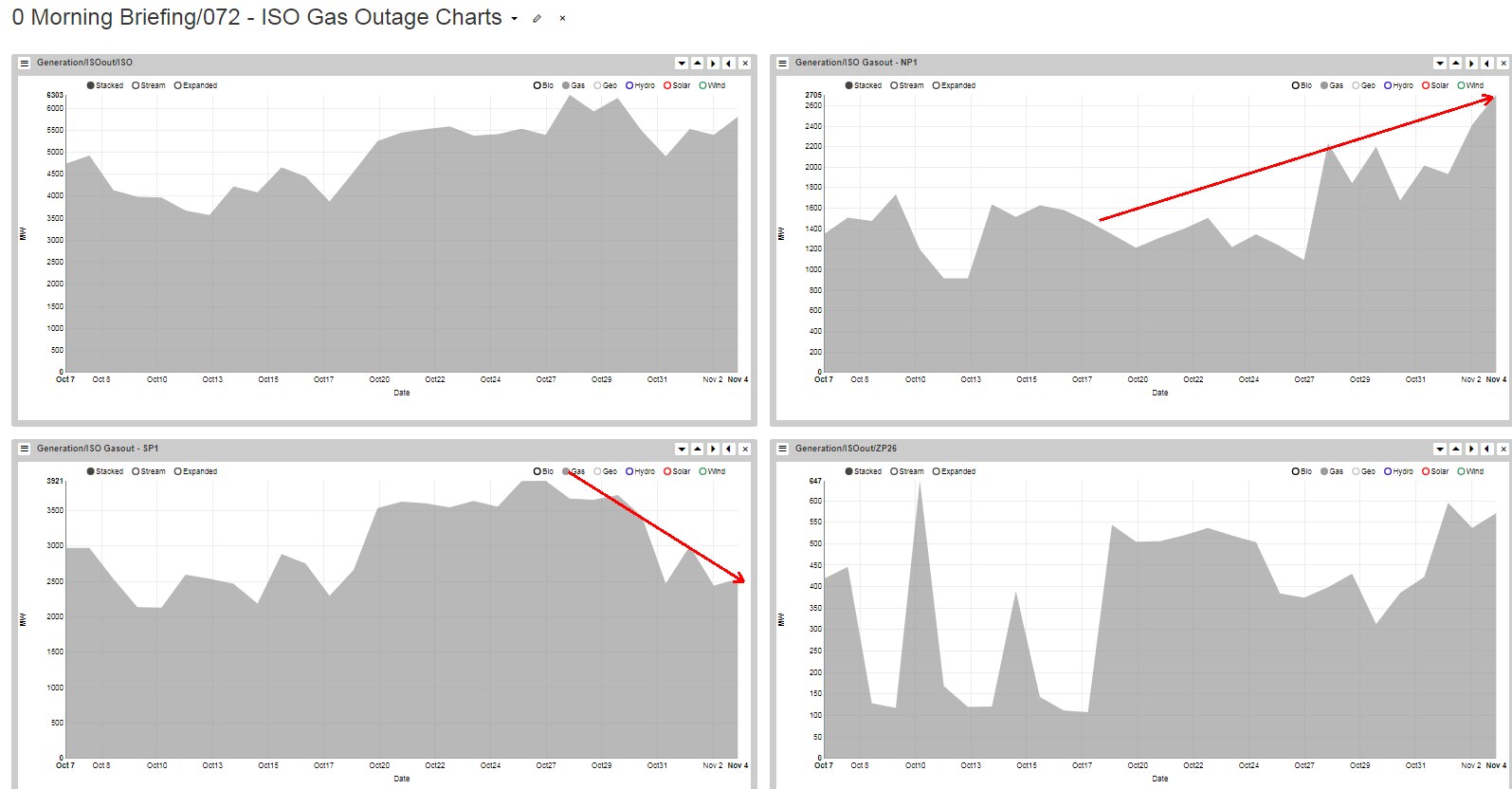 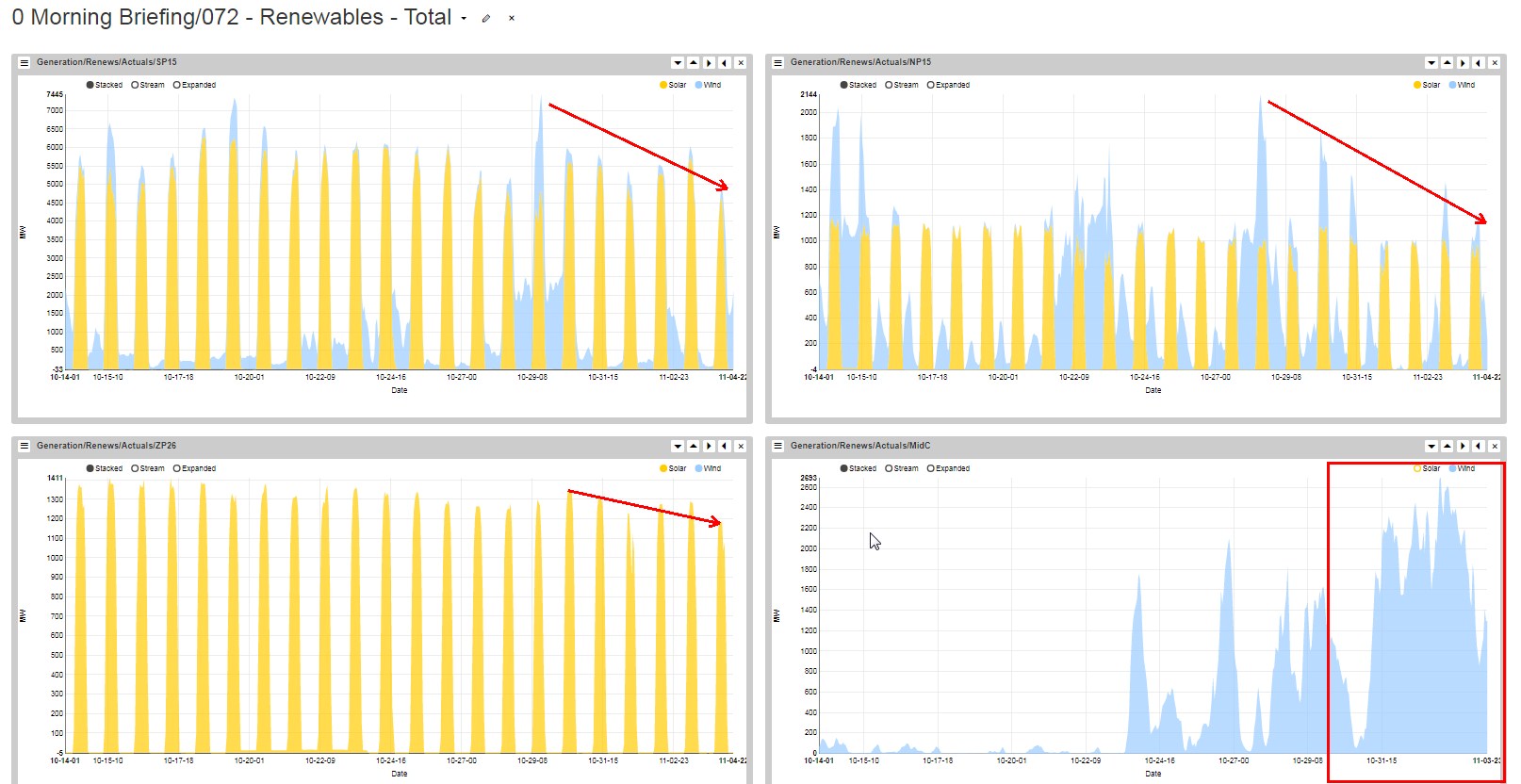 There’s that blob of wind at MidC and the renewables in the ISO are off. 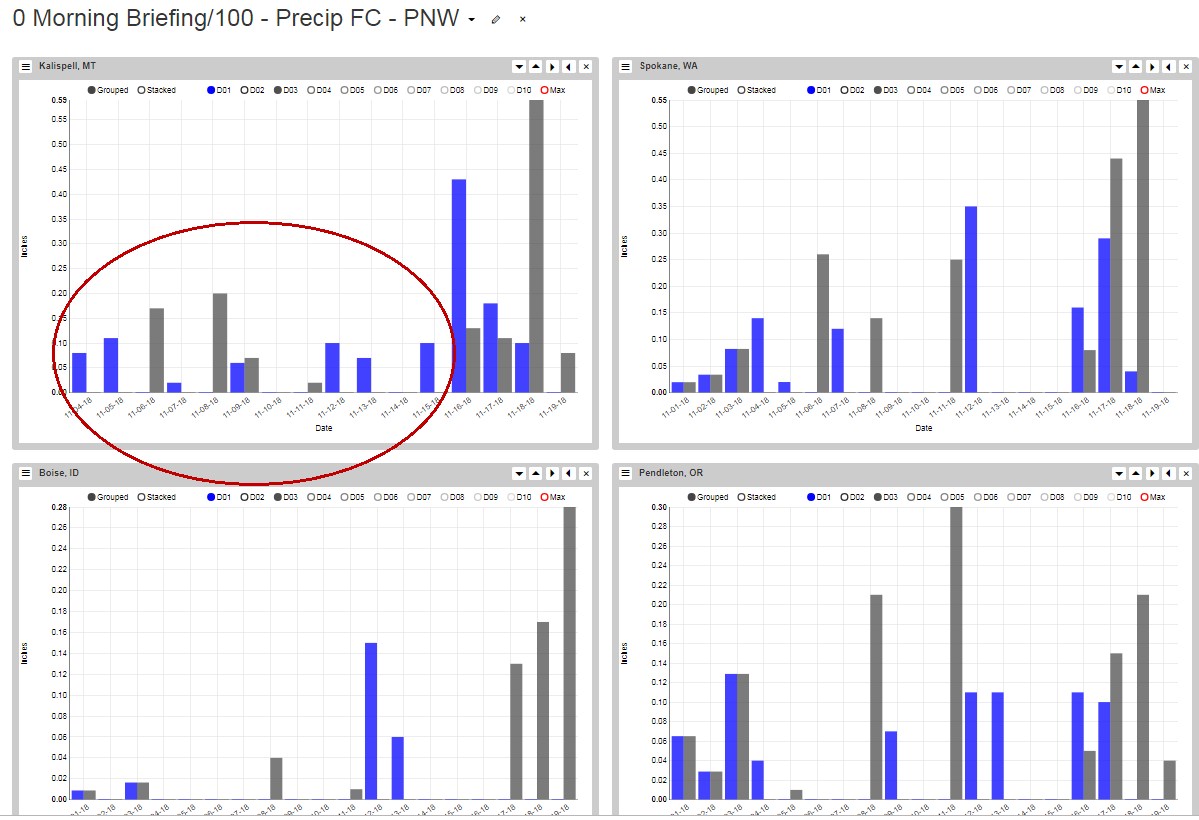 We mentioned dry, and that is confirmed in the above. There is no precip in the near-horizon and now that it is November the draught begins to matter.  Our forecasts are still hovering around normal but the weighting grows daily; yet too early to bias a book off of cumulative precip anomalies. 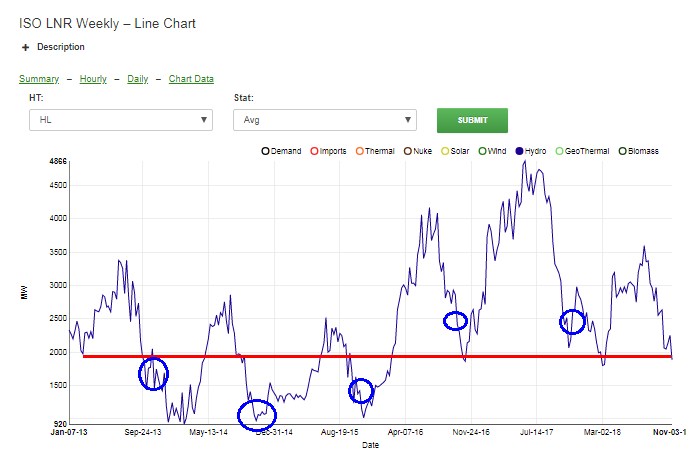 The ISO’s hydro production is in a freefall and approaches the 2013-15 draught levels. There is no rain forecasted for California in the next seven days. 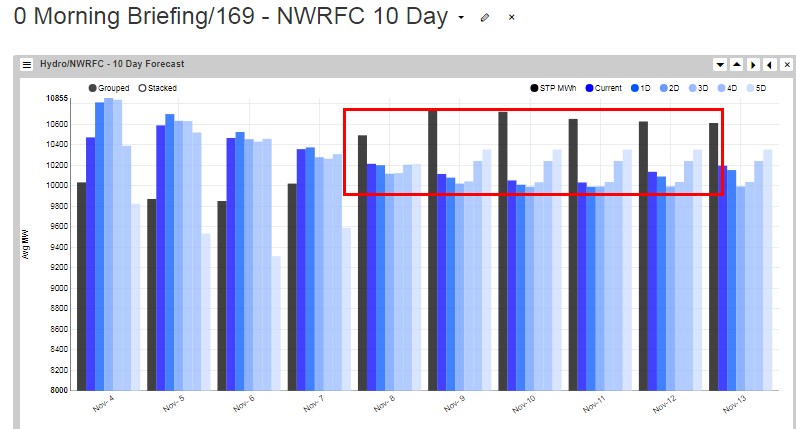 The River Forecast Center cut its flow forecasts and we’d expect today’s STP to show cuts in BOM and perhaps spill into Dec. 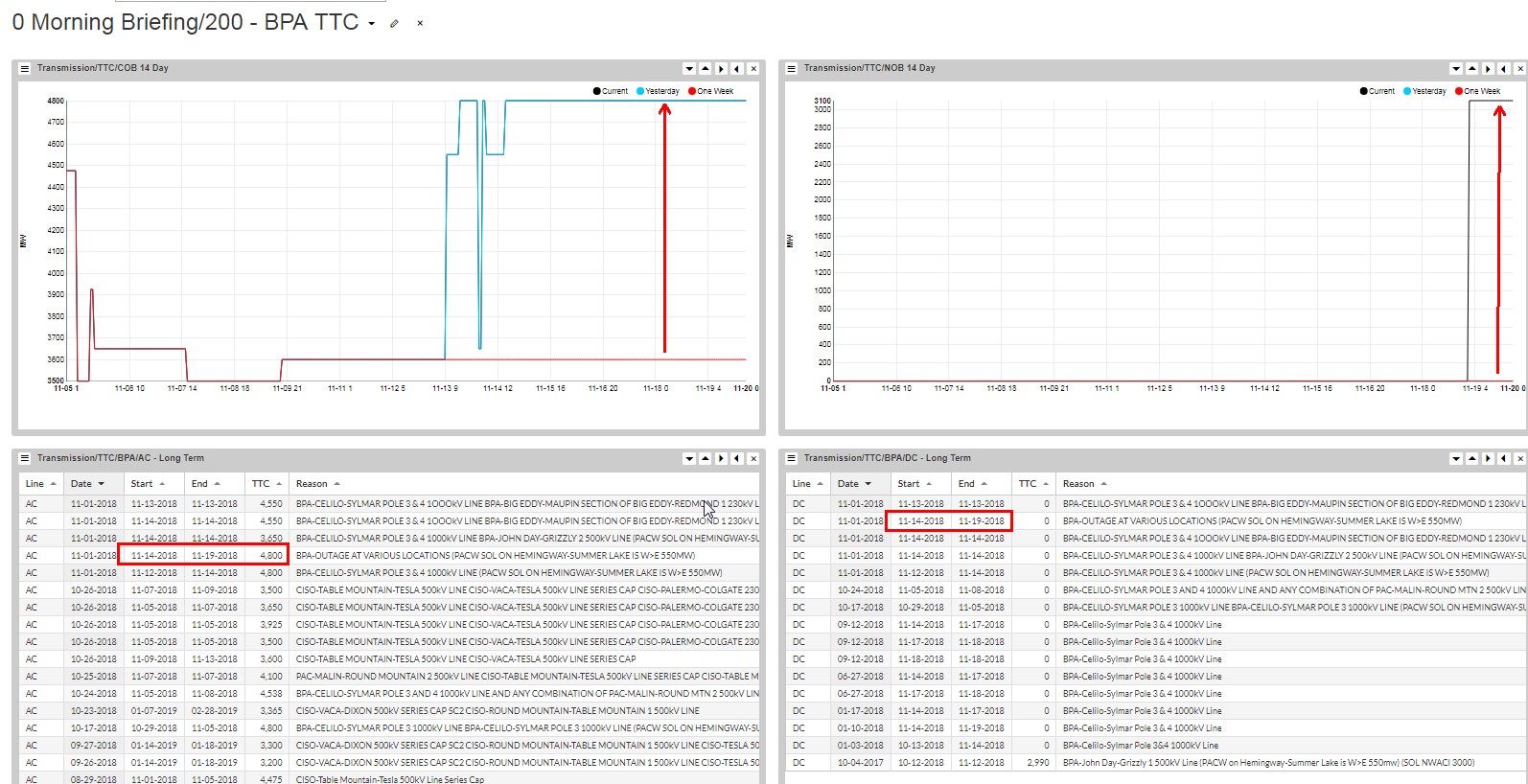 The DC returns in fourteen days and the AC’s capacity is fully restored next week.

We’ll publish our APT thoughts in a subsequent post.