Here is the release from Westcoast Pipeline … 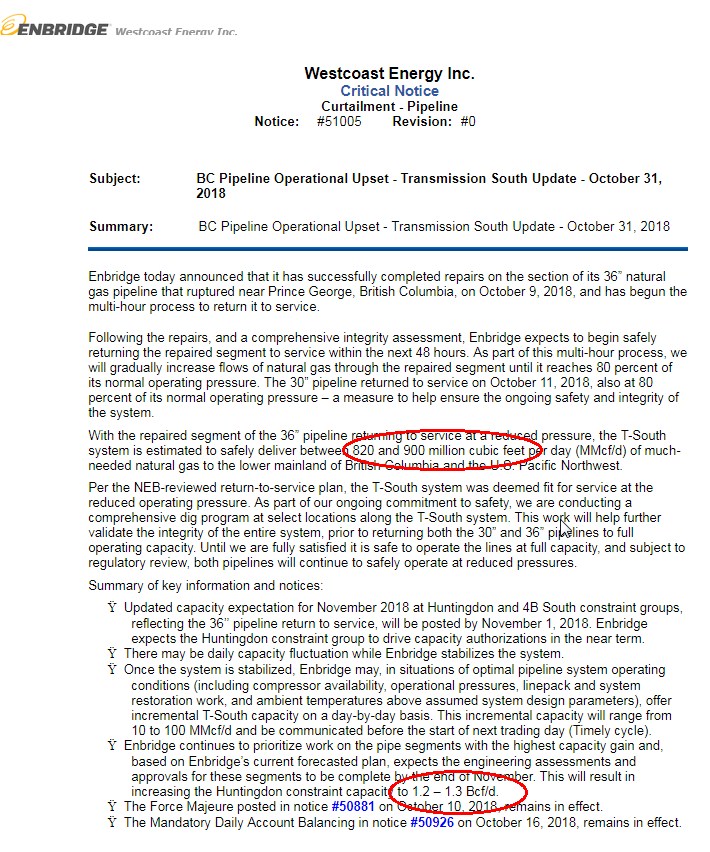 Now, that is how you fix something — two weeks ahead of schedule. Maybe Socal Gas should outsource its repairs to Enbridge?  So initially, perhaps for the next couple of weeks, flows into Huntingdon will be up to  900 MMCF then rally to up to 1300.

Even with the accelerated repairs, the flows will be substantially lower than 1800 peaks seen in each of the last five years. Assume Fortis and Northwest Pipe split the haircut; this will result in 200-300 MMCF lower inflows at Sumas. MidC will be tight but rolling blackouts? Not sure we see that without extreme dry or bitter cold. Don’t see the latter but living the former … 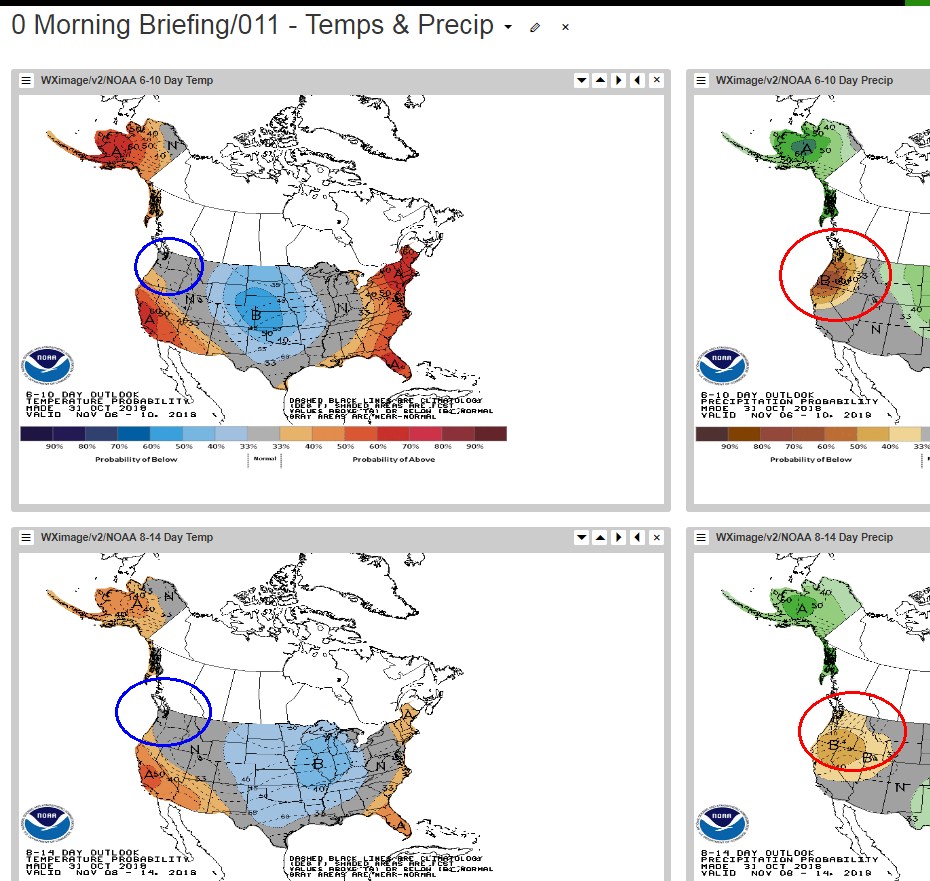 Not bitter cold, but much colder than the outlooks earlier this week; and still very dry.

Portland even has an outlier where it sets a ten-year low, but that is just beyond the NWS horizon, and we place low reliability on that outlook. That said, every major city in the WECC is getting colder, and gas loads will rally.

Sumas term gas has pulled back; we would expect that given the inevitable return of 80% of the pipe’s capacity, but don’t expect the hub to return to pre-explosion pricing just yet; Winter just started.

Socal Citygate dropped as well, and nothing has changed there. All markets are holding their collective breaths waiting for that first “Dark Blue” paint in the 6-10 or 8-14 day. 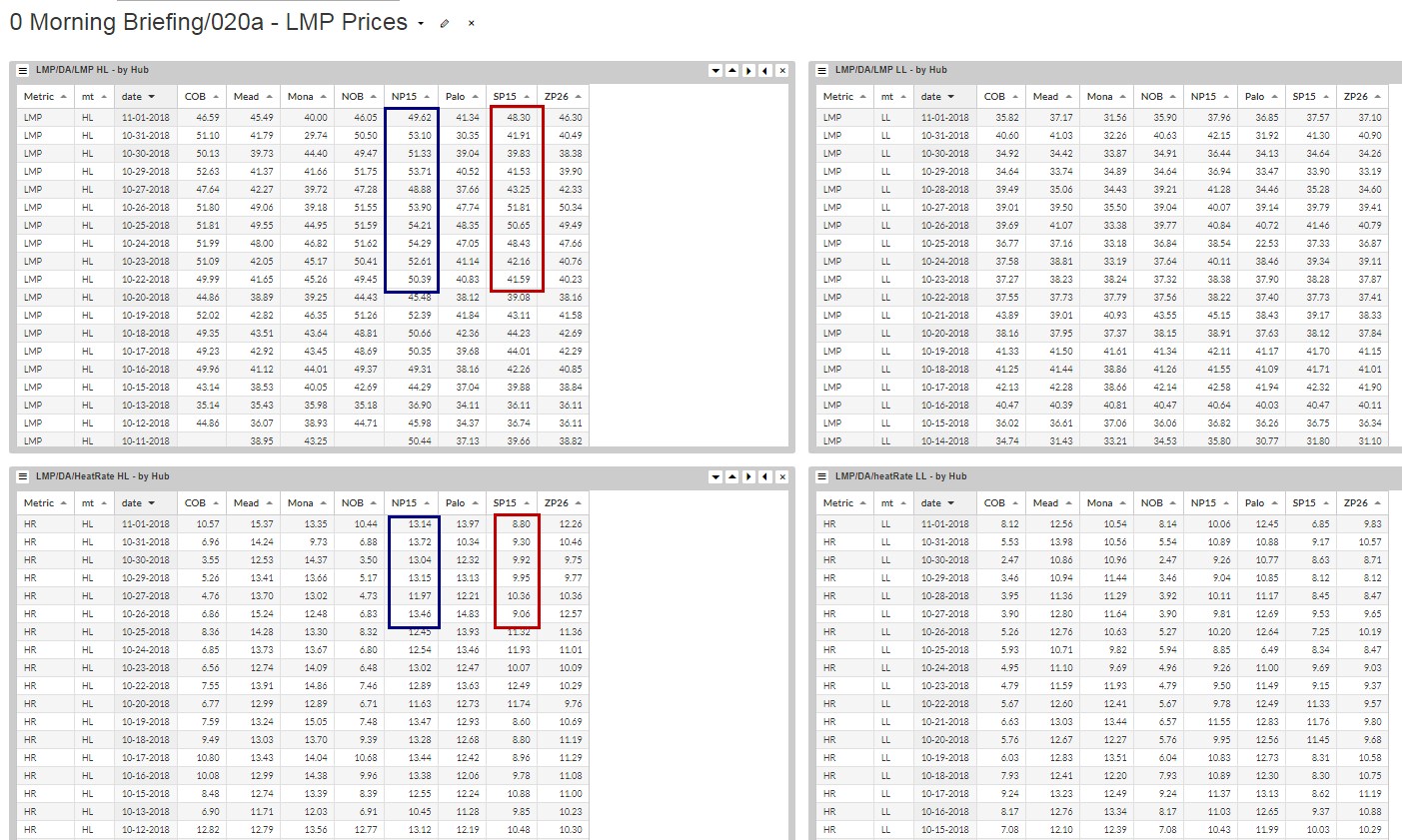 We were surprised to see NP’s DA LMP clear over SP’s, not only heat rate but also price. Surprising given the loss of the DC imports, warm LA weather; most likely the term spreads will react to cash – they always do. More on that in the APT section. 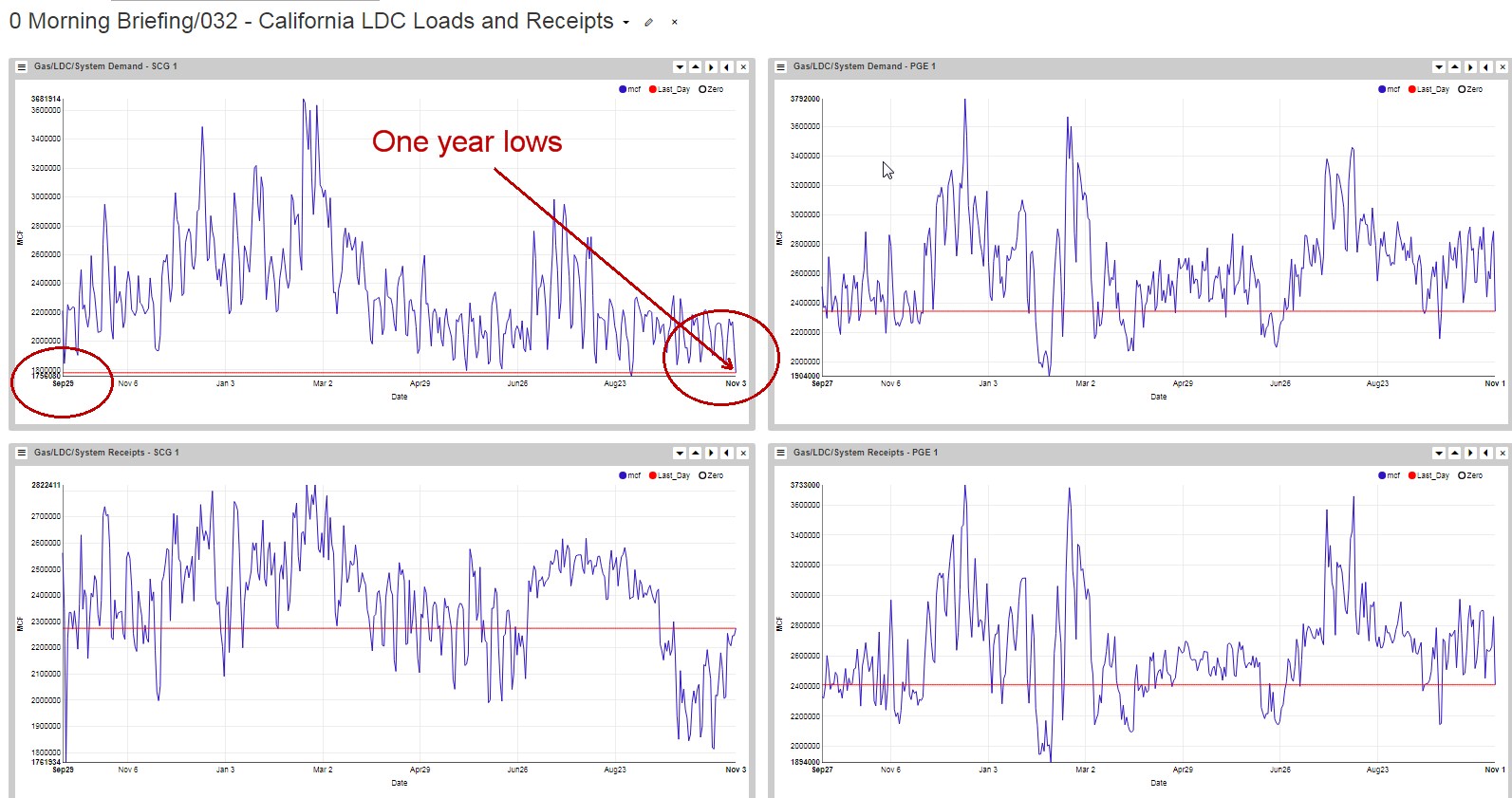 Demand, no doubt, is one reason Citygate is soft; the LDC set an annual low for Sendout yesterday. 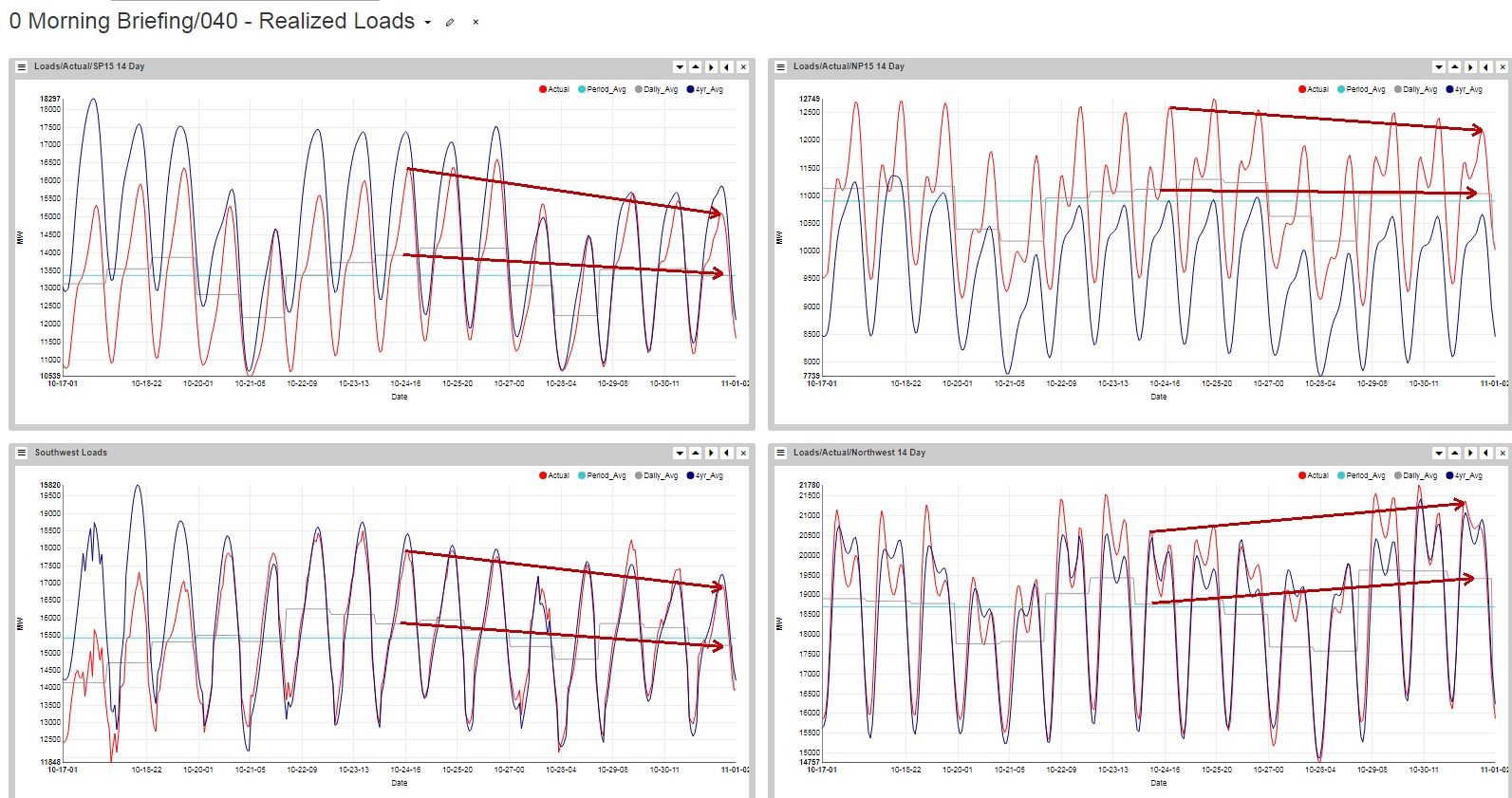 Realized power loads are off everywhere —- except at the MidC, those loads have rallied off of cooling weather. 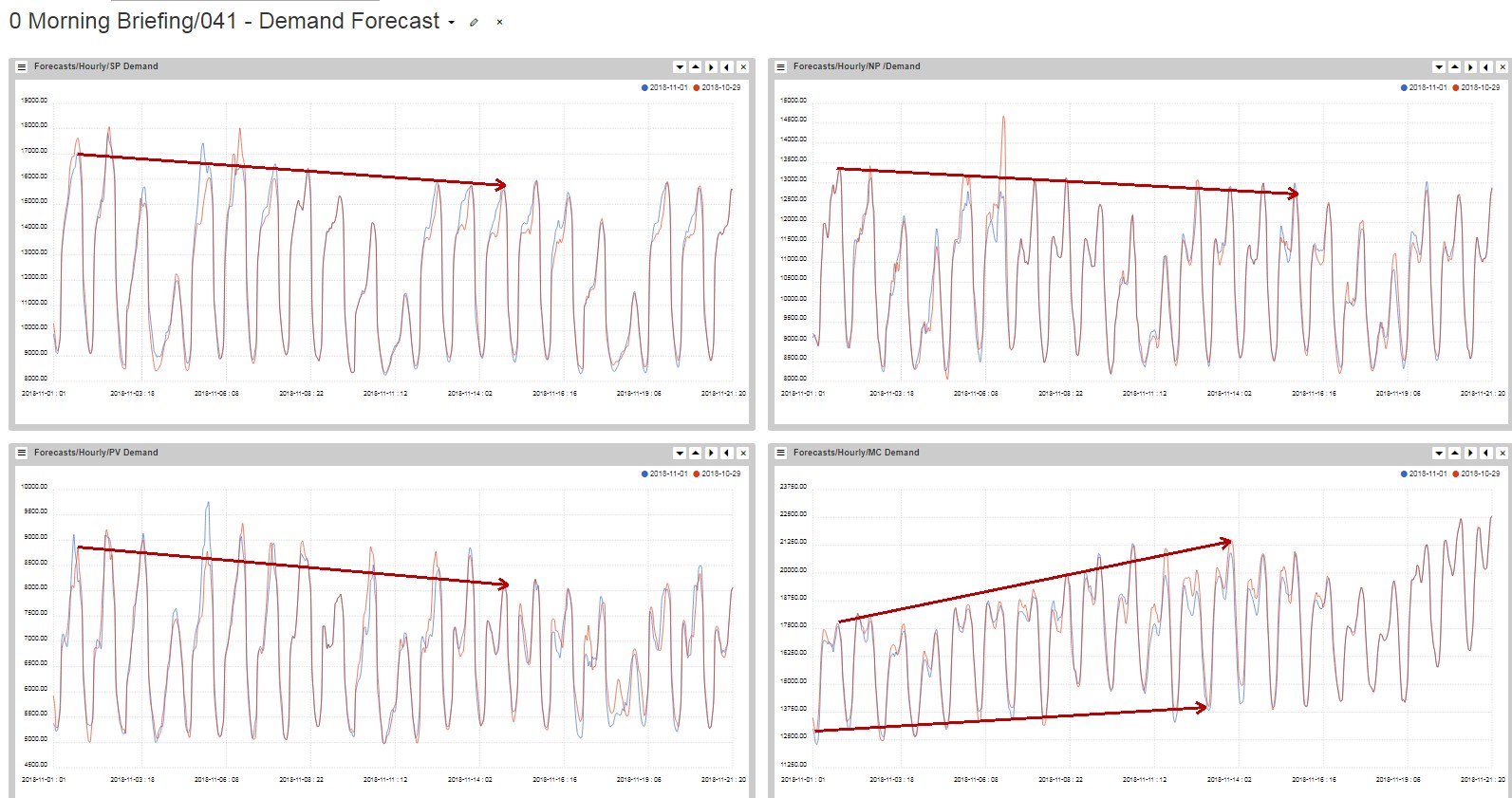 The above plots are forecasts and like actuals, all are tanking expect at the MidC where that hub is now officially into its heating season. Even on mild/normal weather, the hub will see peak loads rally 4000 MW over the next two weeks. 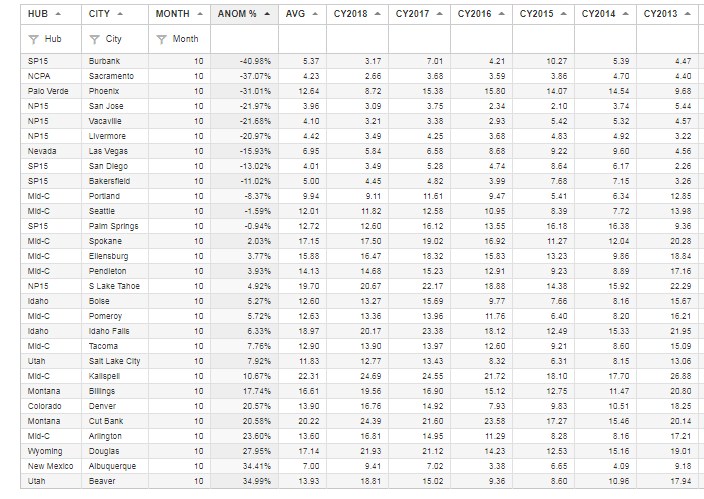 With the expiration of October, we’ll post the final degree-day summary – lots of negative anomalies because Socal never had a late-season heat event. 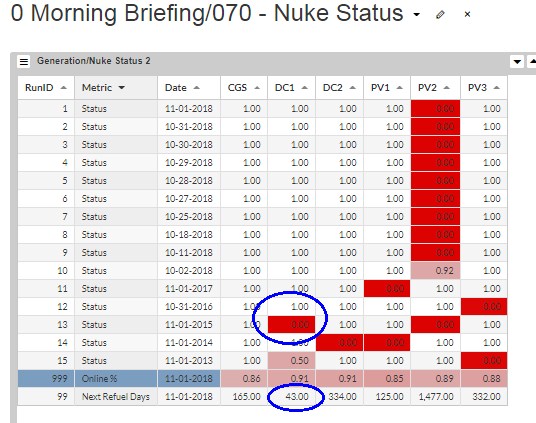 PV2 is still in refuel, but we’re expecting Diablo #1 to go down for its refuel in the next few weeks; It started its refuel on Nov 1 in 2015, though we show 43 days of fuel left in the tank. Doubt they want this off in Dec, we think it comes down soon. 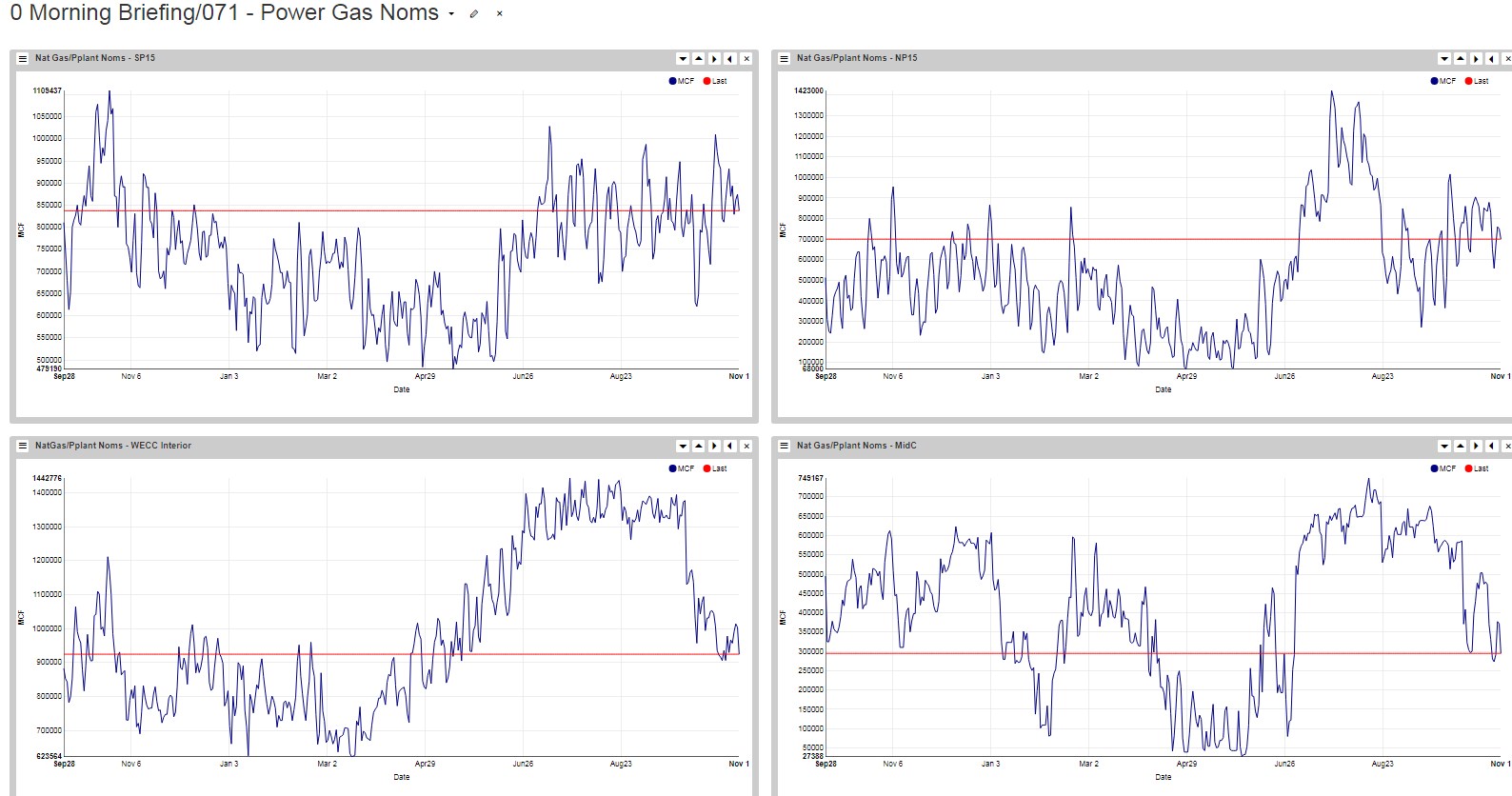 The ISO hubs are sideways while Palo and the MidC’s gas noms are down. Palo is down from cooling weather while the MidC is down because it doesn’t have the fuel to run its turbines – the hub has no choice but lean on its hydro. Fortunately, the wind is blowing and helping things out.

Big wind at all three hubs, even at SP which may explain some of the weak LMP prices. 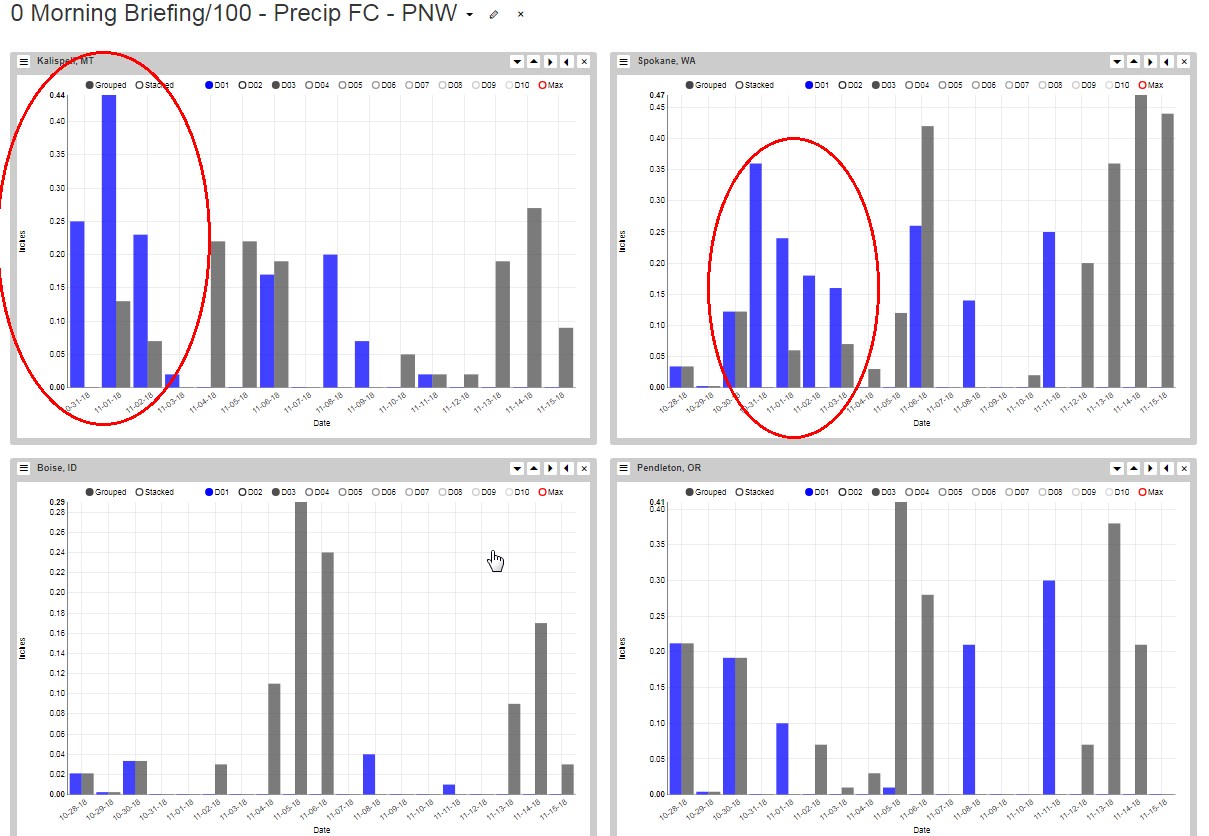 We said it is dry in the Northwest but NWS bumped its outlook yesterday and now the Production Center stations of Kalispell and Spokane are wetter in today’s forecast than Monday’s. Not “wet” but wetter.

The River Forecast Center has moved up its water supply outlooks while ours are just slightly nudging up. Still, we cling to normal as it is far too early in the water year to project any anomalies, in our opinion. 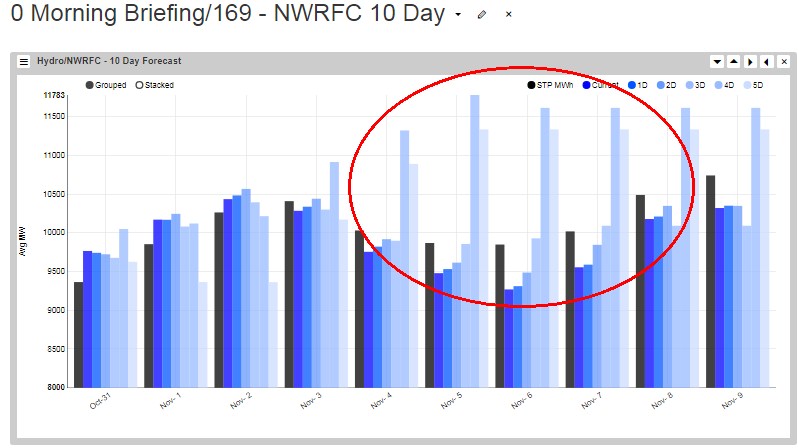 Last Friday the NWRFC was all hot and bothered and projected a massive bump in Northwest streamflow; now it has second thoughts on that bold and wrong outlook; big haircuts. 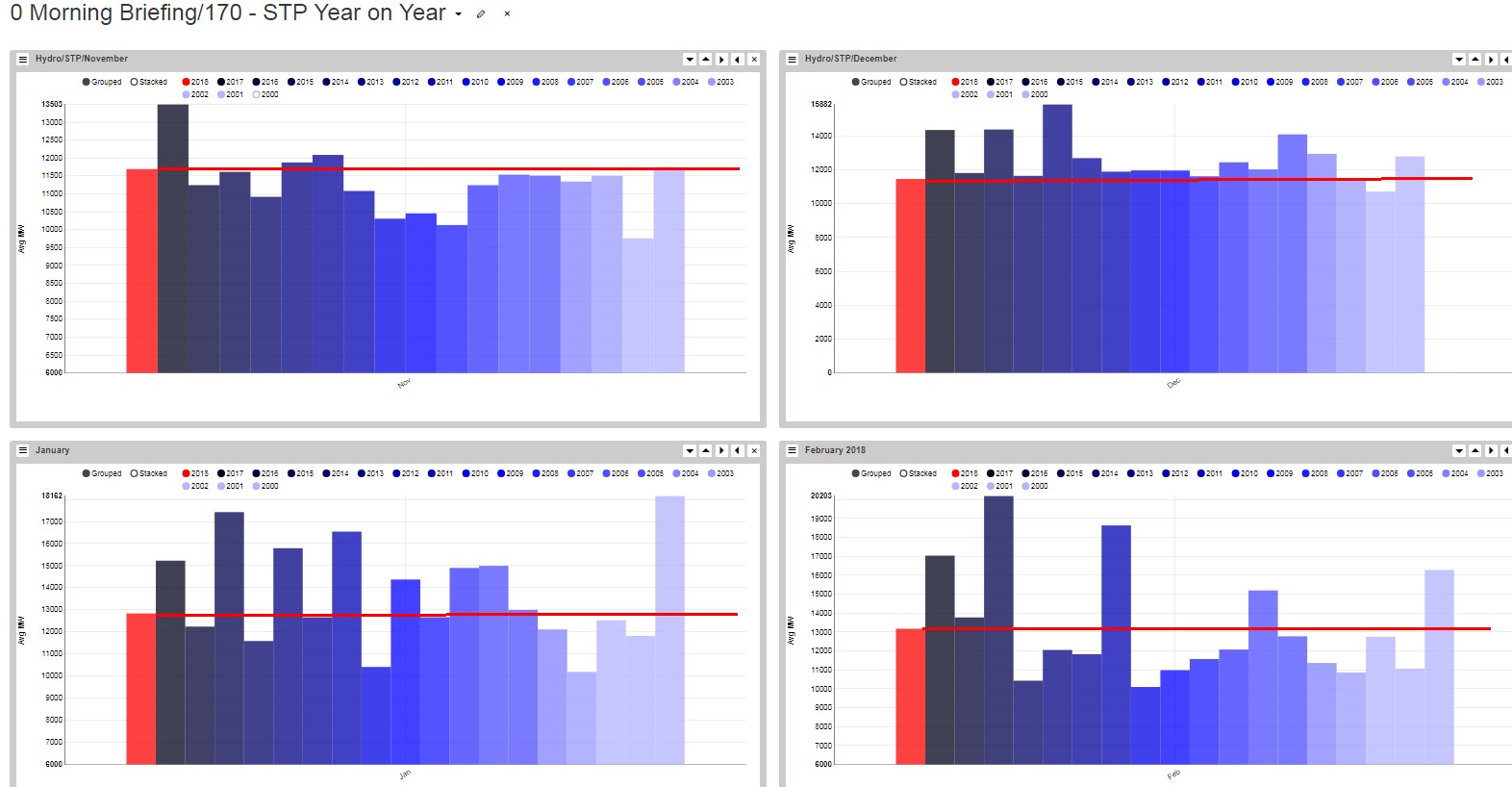 Where three weeks earlier the NWRFC was projecting Nov and Dec to be the dryest in the last twenty, now Nov is the third wettest! And it hasn’t rained much, mostly below normal has been collected. 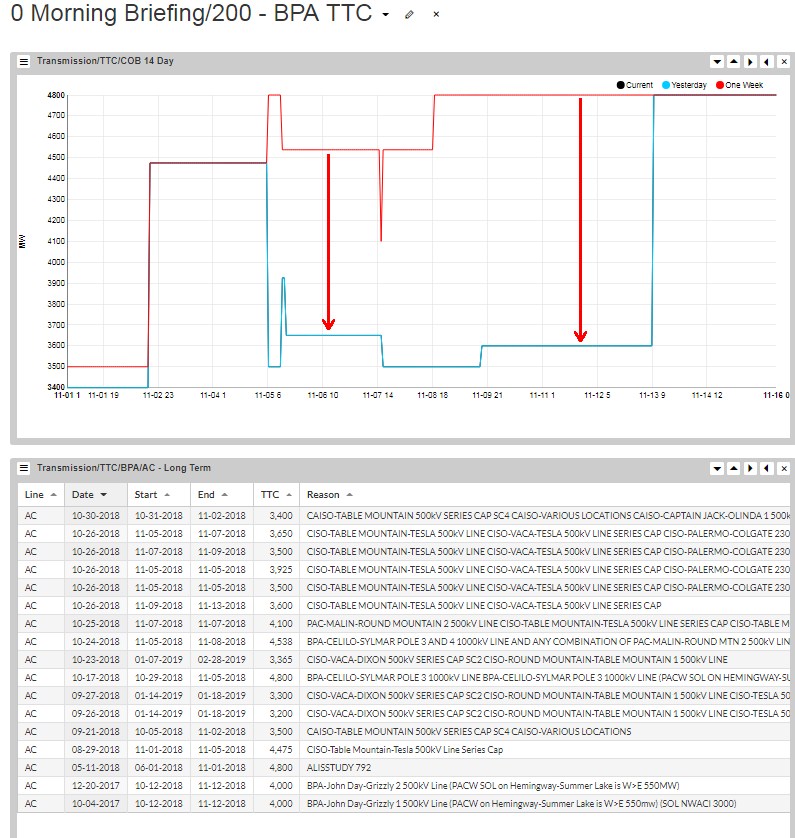 BPA has cut capacity on the AC versus last week but returns the line to full fourteen days out. Doubt it matters, the line isn’t fully loaded anyways. 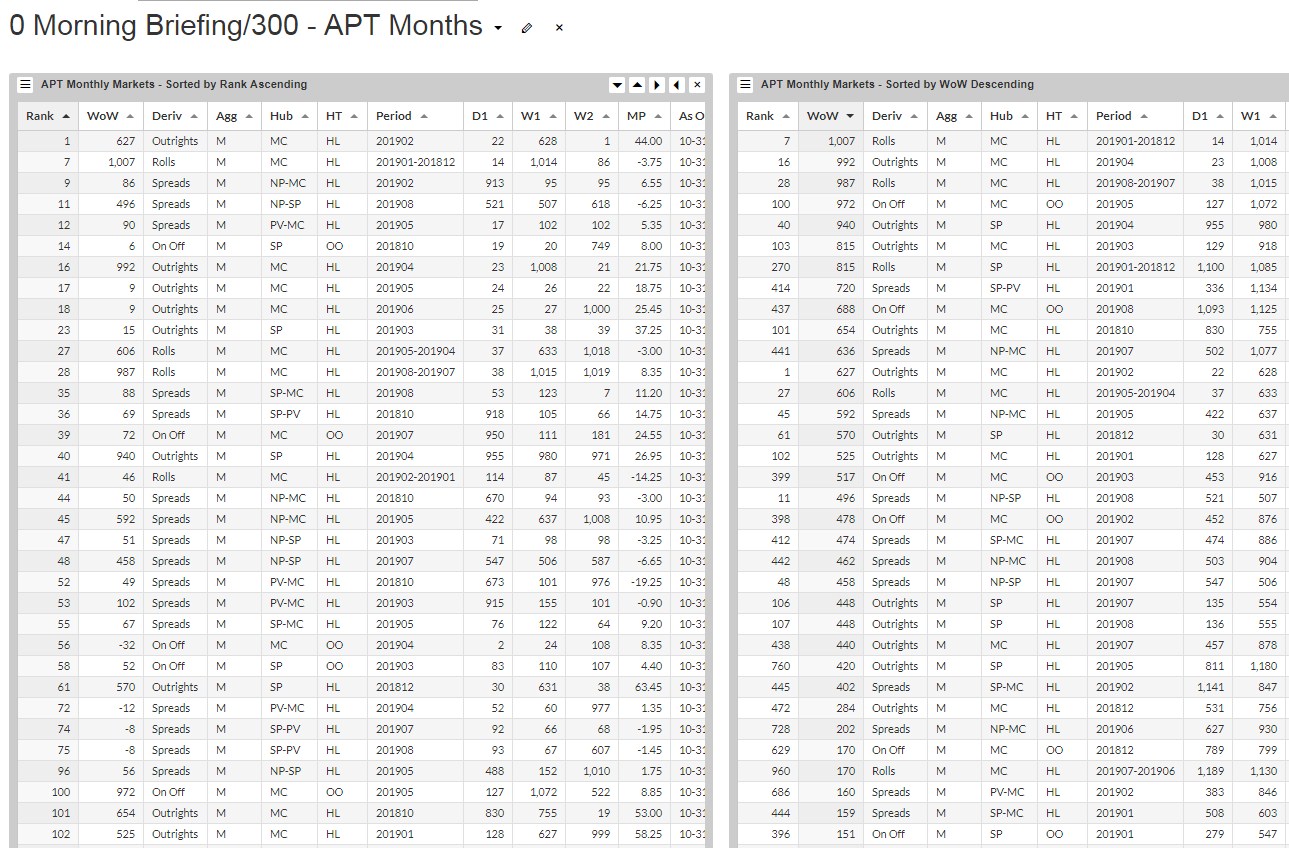 The above table is from a new dashboard; we selected Monthly MidC and SP15 and all related derivatives. The first table is sorted on Rank Ascending; the second on WoW descending which will return the week’s most significant moves. Sort WoW ascending to find the biggest moves towards value, these are the trades to consider liquidating.

The following few caught our eye. These are in no particular order. 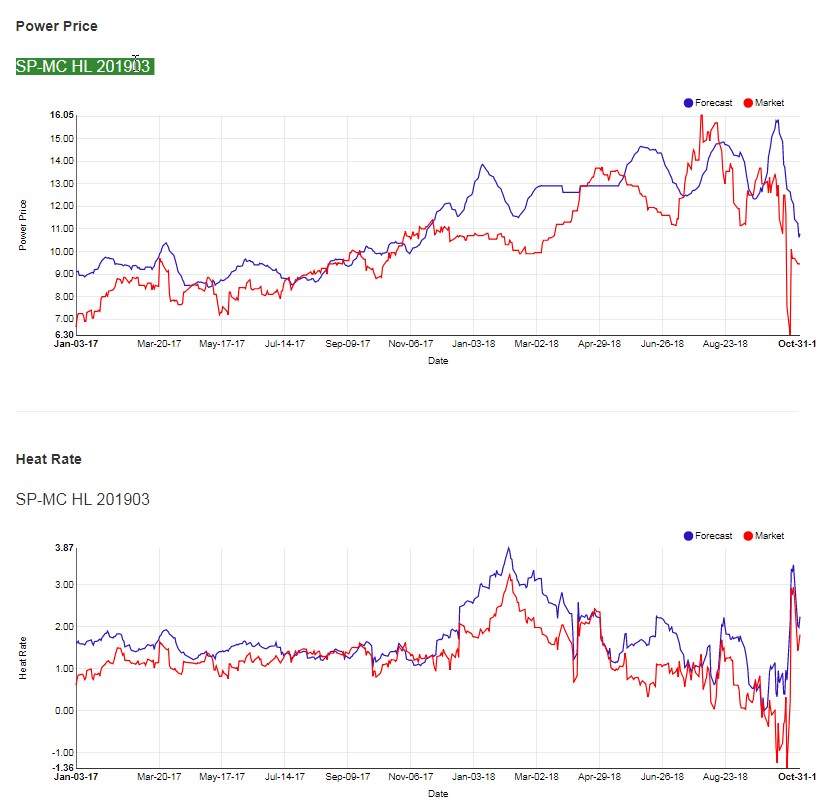 The March SP-MidC was too cheap to meter, for a day, but we’d suggest it is still cheap. The thinking here is that any issues at MidC are mirrored at SP and that by March Enbridge has restored Westcoast to full capacity. We see the value of the spread between $11 and $12. 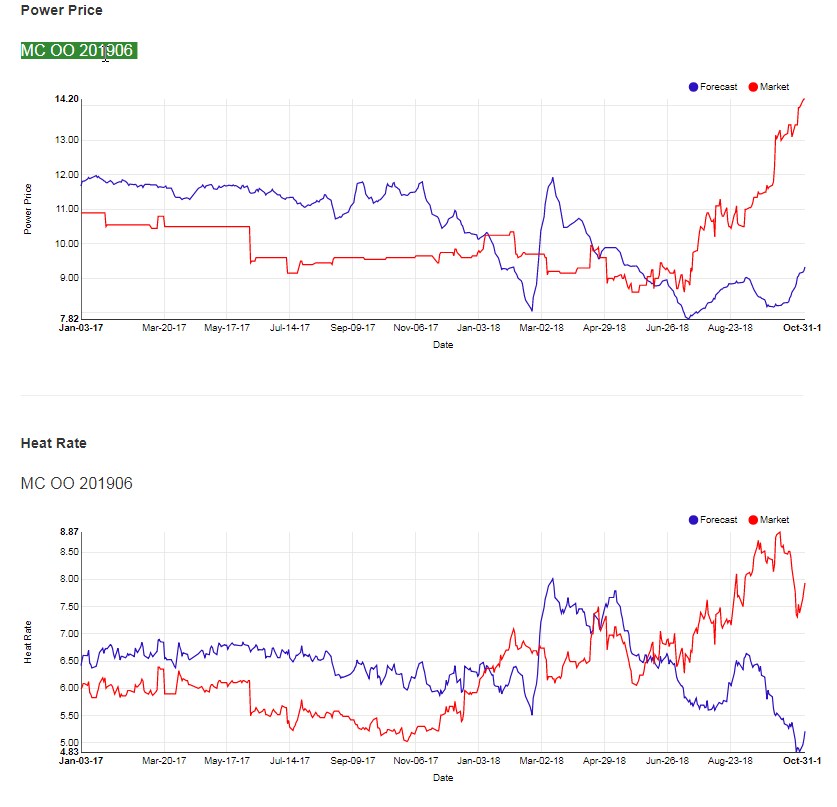 June MidC’s on|off is rich in terms of price and heat rate and we’d be comfortable shorting this. To reach those levels a couple of things must happen. First, we’ll need big enough water to put the LL into the low single digits but not so big that HL falls out of the gas stack. Already, you’ve defined a universe that has less than a 50% chance of occurring. Massive water or extremely dry will crush the spread, plus it is way too early to be making outlandish and unsupported bets on the water year. Sell. 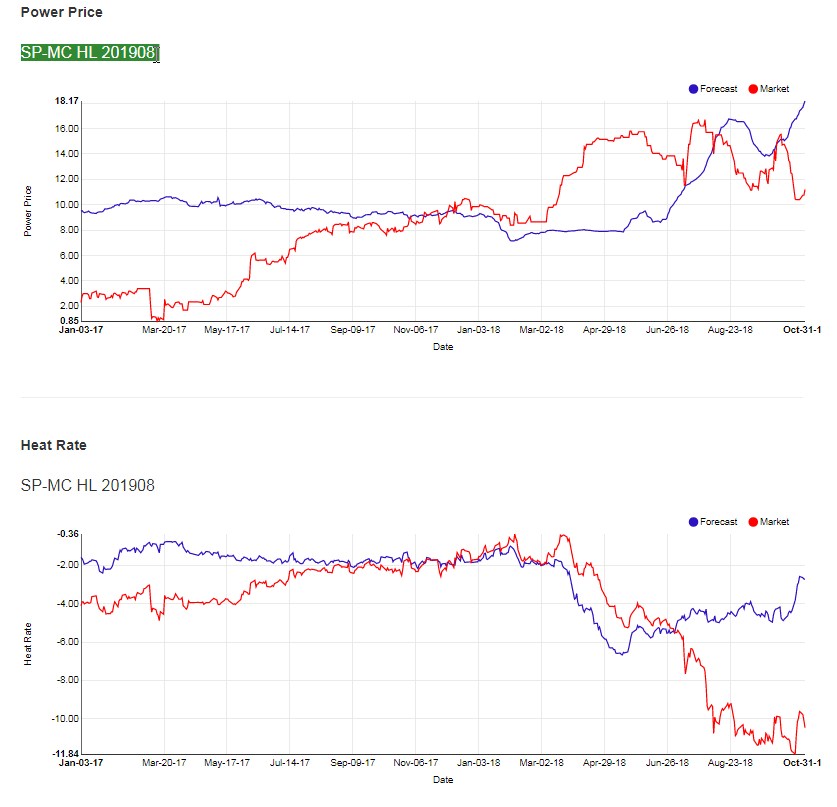 A bit deeper in the curve but August is fair game when playing the water year. This caught our eye because the forecast is well above the market and the latter is at a seven-month low. You have to trade this from the Q, but we’d do it and own the Socal. One thing we can be confident in is the incompetence of Socal Gas and the obtuseness of the CPUC. In other words, SP’s gas problems won’t get fixed by summer but the MidC’s will. 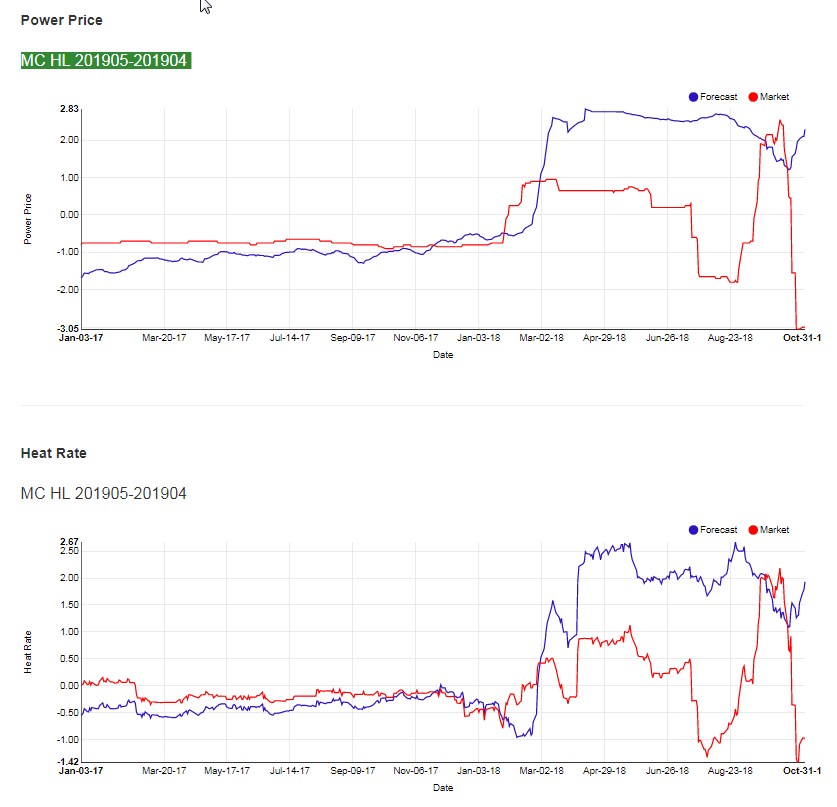 We ranted on this in an earlier post and are still ranting. Our strategy is to fade extremes and this May-April MidC Roll is just that. Both the heat rate and the price are at contract lows, yet the forecast hasn’t budged because our model uses an accurate forecast of flows during these periods and the market uses a collective Ouija Board. 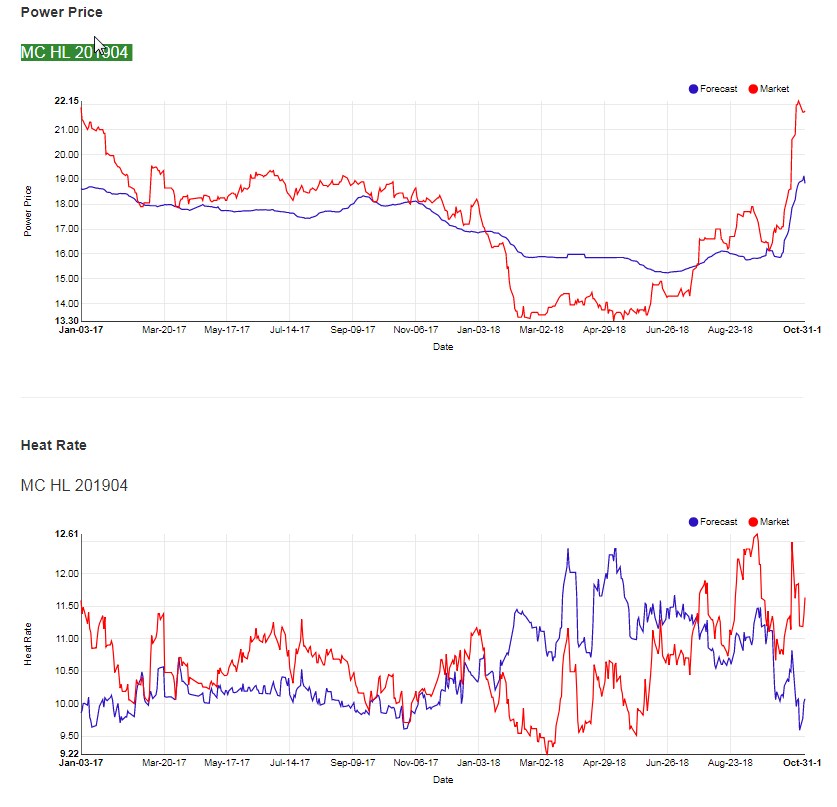 We pulled out one of the legs, the April and it’s easy to see why the roll is so high. For April to clear at these levels there cannot be much of a draft; how does anyone know that on November 1? These prices also assume extended problems at Westcoast; we doubt that happens. 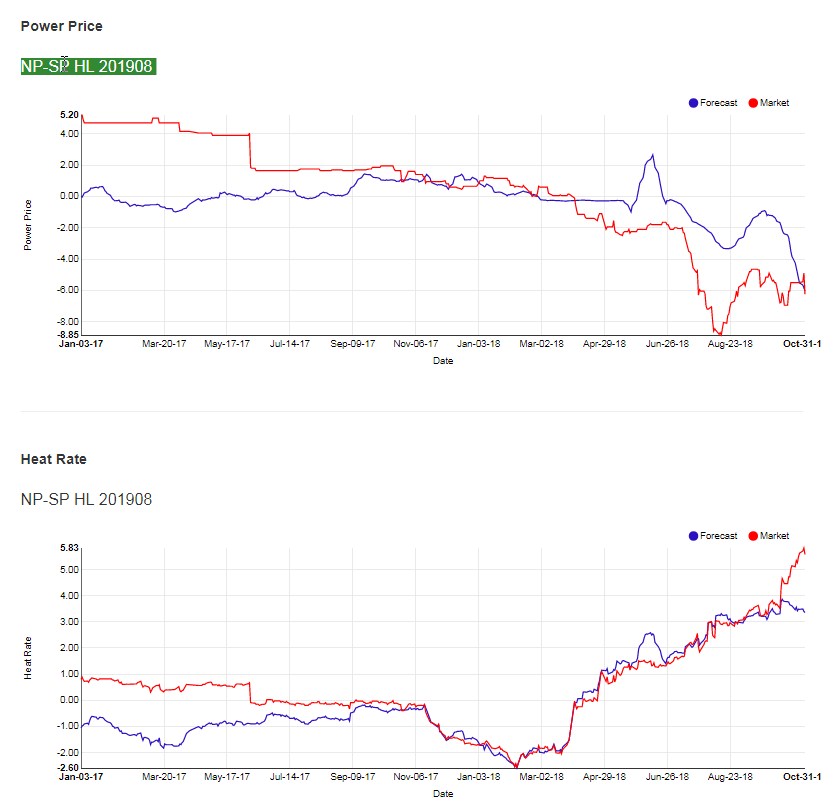 This late summer spread between NP and SP is modestly cheap from a price perspective. The market correctly assumes Socal Gas still has issues and we concur. Pass. 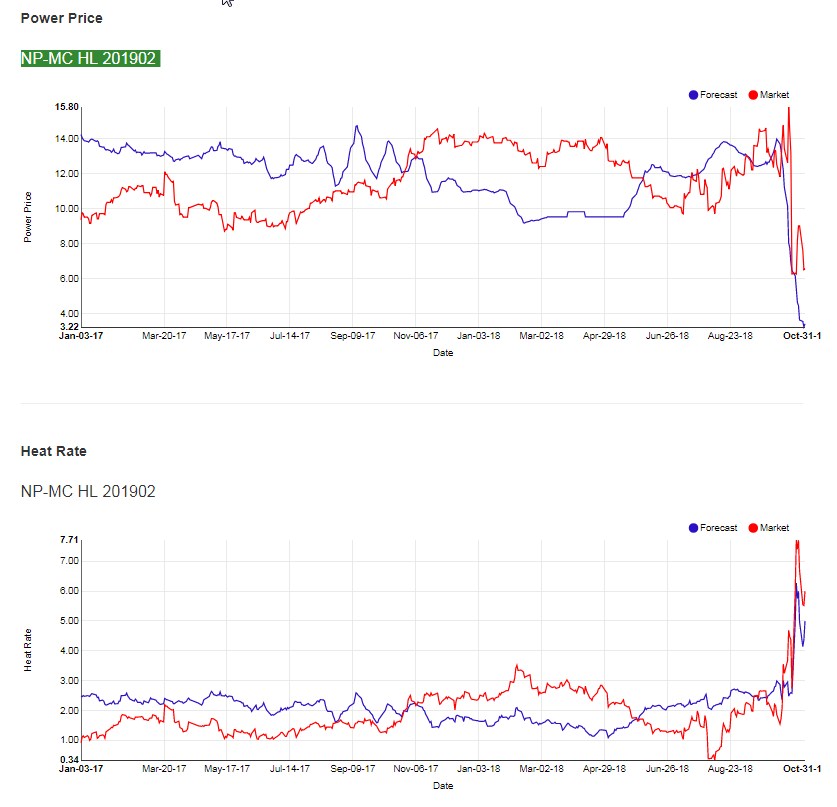 The Feb NP-MC is cheap as the fear of Enbridge rallied the MidC; the questions unanswered are how long the derate of the pipe lasts and how much water will the MidC see in Jan-Feb? After watching these Canadians rebuild Rome in a few weeks, we’re more inclined to think they’ll be back at full capacity by December. BUY. 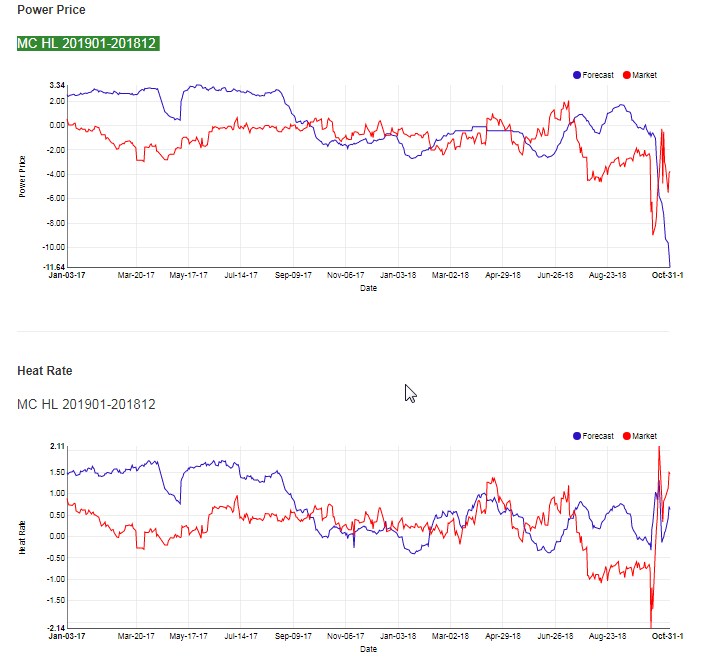 Talk about whipsaw, this Jan-Dec roll swung $6.00 in a week and now its more fairly priced than not.