With the advent of the new water year, I switch to an APT focus. Still, there will be references to significant developments in the fundies and some weeks I’ll skip APT. Today, we need to address the Enbridge situation, then we’ll post some trade ideas.

For starters, Enbridge announced the repairs to its ruptured 36″ line will be completed by mid-November. That’s the good news; the bad news is the pipeline won’t be fully repressured this winter; instead, it will flow between 900 MMCF and 1400 MMCF through March 2019. So what exactly does that mean? 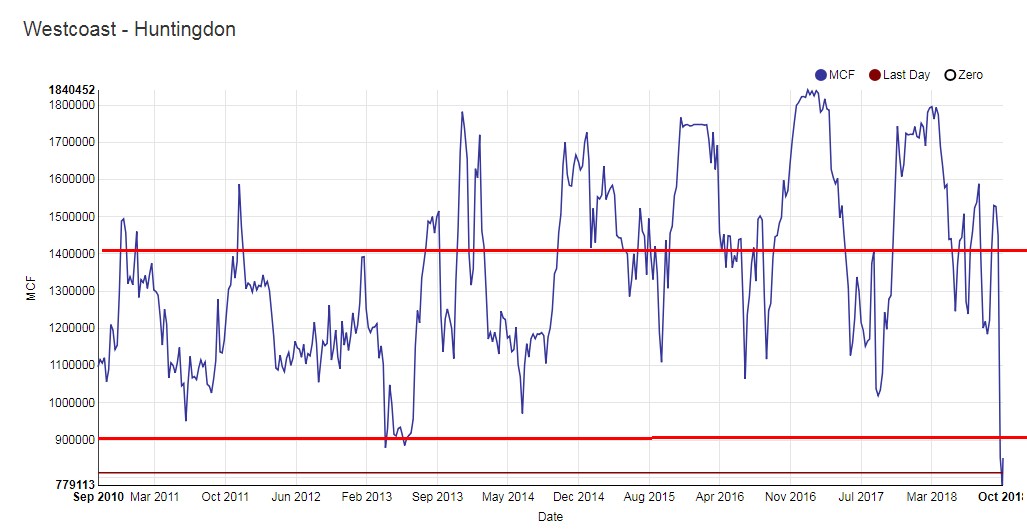 That’s what it means. At the low end, the 900 MMCF suggests loads won’t be served, and at the high end, the Northwest might limp through this by slamming its storage, and maybe not even that will prevent disruptions to service. A bigger wildcard than Enbridge is water – how much hydro energy will be generated this winter? More on that later, below.

Just how much gas are we talking about? 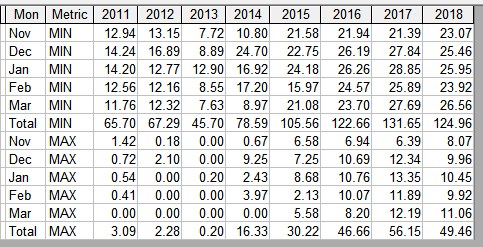 The above table compares actual nominations at Huntingdon versus the two caps. The Min reflects the 900 MMCF lower range and the Max reflects the higher range (1400 MMCF). If this year looked exactly like last year, and only the Minimum (900 MMCF) flow,  then Huntingdon would be short 124.86 BCF from Nov to March. If the max end of the range flows, then the shortfall would be 49.46 BCF. Each year and month is depicted in the above table. The haircuts are relatively consistent across all six winter months and the last three years have seen the most Westcoast gas flows.

Indisputable, the Northwest will need to lean on its gas storage to limp through the winter. The above summarizes Mist and JP; each is slightly off from their five-year averages, but overall pretty close to average heading into this dystopian gas world. Meanwhile, the market has reacted to the news:

Spot gas soared to the mid $6s, but strangely, AECO is now about free. I guess all that lost south-bound capacity has forced shippers to send their BC gas to Alberta and now AECO is too cheap to meter. LOL.

The pain is not just in the spot; not hardly.

We left Henry in the chart to provide a relative benchmark; where Sumas soars past the market bets a high probability of supply disruptions and shortages in serving gas demand. Naturally, these fuel prices are driving the power market nuts.

Take note, the market prices are well above the forecasts, and the forecasts are using Friday’s end of day term gas prices; mostly the forecast matched the market pre-explosion. This suggests one of two things. Either the power market has over-priced the Sumas issue, or the power guys feel the gas guys have under-valued the situation. We’d tend to think the gas guys are better at their job than the power guys, no offense power guys, but they are. Not because you aren’t good, but because there aren’t enough of you out there so the liquidity is abysmal and small ripples become tidal waves of irrationality. Just look back at last summer.

No particular order to this, just a few trades that caught my eye. 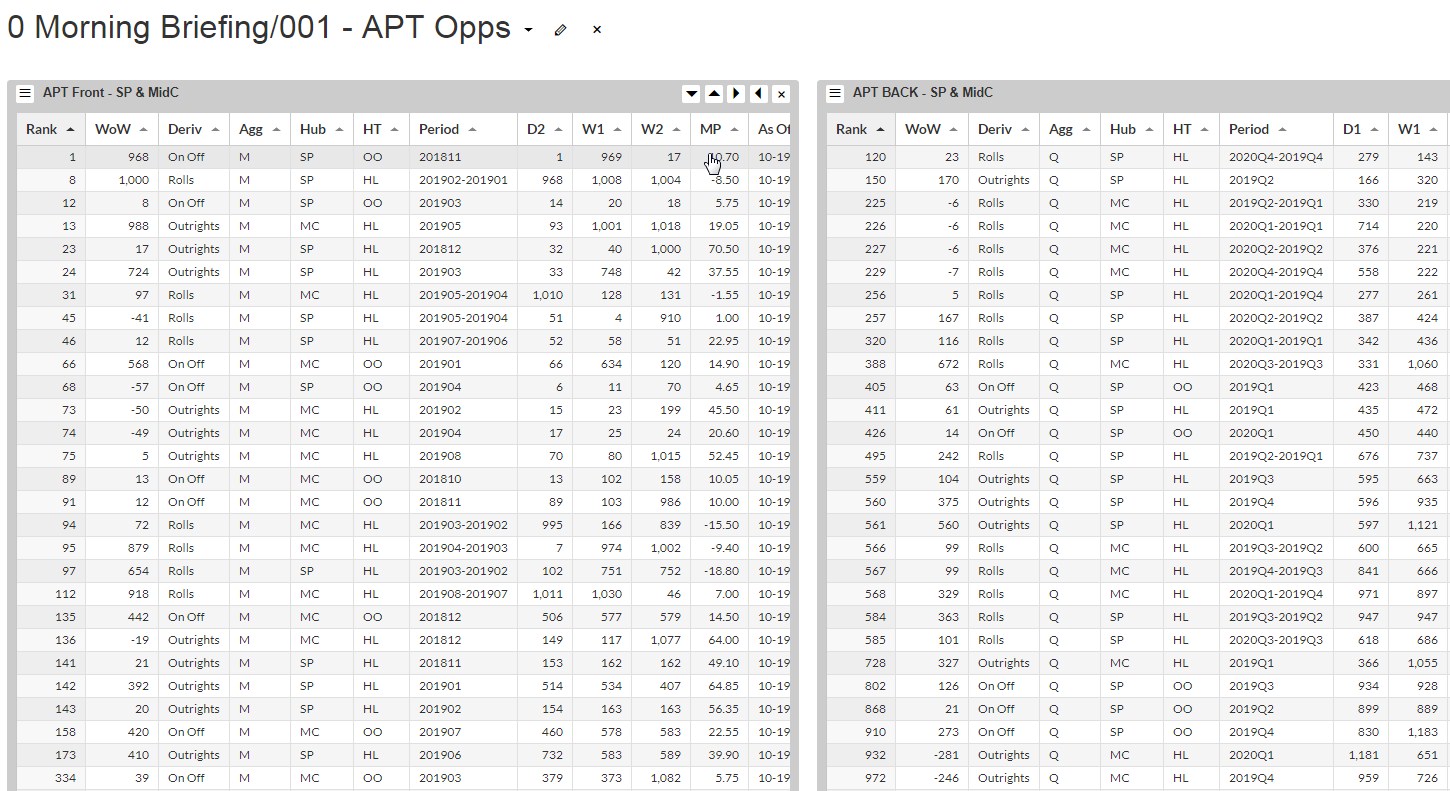 I am using the above dashboard; this is a new one because it summarizes everything I care about in a single screen. The left side is months for MidC and SP15 (no NP or Palo because of liquidity issues) and the right side is Qs and Cals. Mostly, I’ll be focused on the months but will, on occasion, post a few Qs. 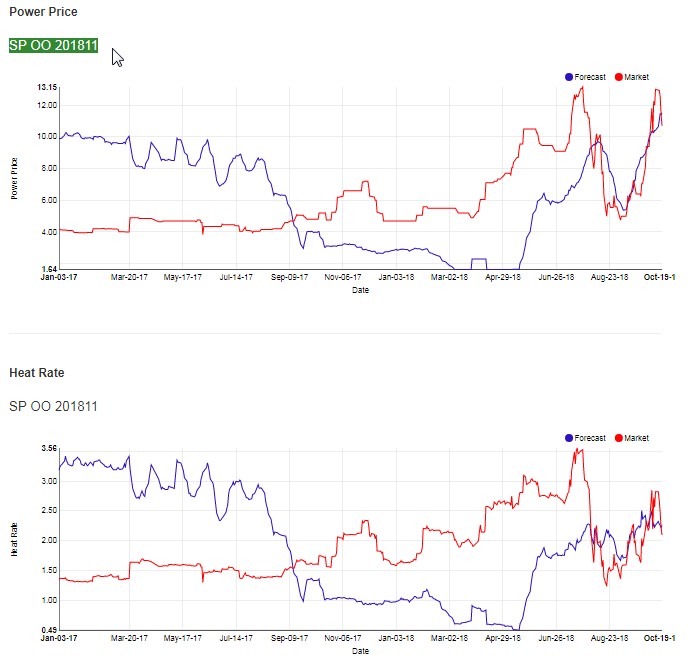 The highlighted in the green text reflects the product name. For some of the new users, the APT naming conventions are as follows:

All charted prices reflect First minus Second; so for a roll, the values reflect Jan minus Dec even if Dec is premium.

Back to the SP Nov On|Off; I would not trade this just because the forecast is so tight to the market making me believe its reasonably priced. It looks to be at a double top and poised to crash rendering the seller a free $6.00, but we doubt it. Look at the second plot, the heat rate; this latest rally wasn’t driven by fundies, the heat rate is quite close to a six-month average. PASS. 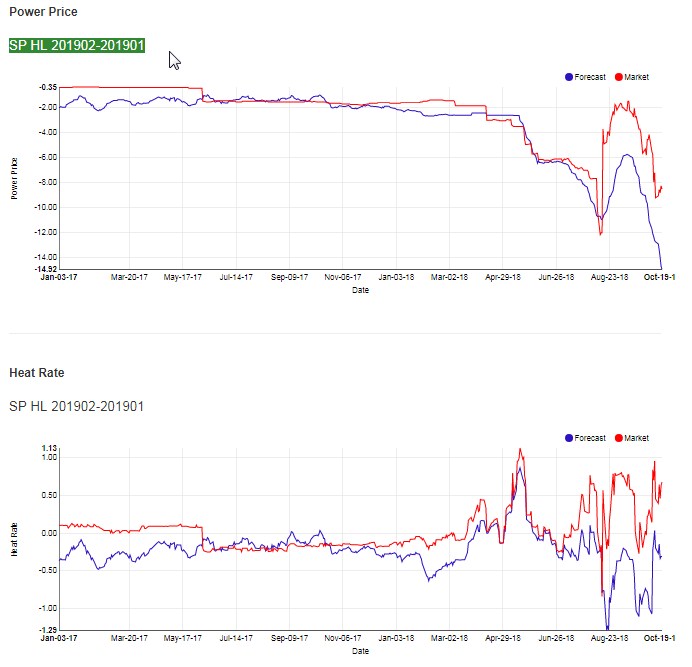 This is a roll, hence two dates in the title; in this case, it is the Feb-Jan roll. Note the plotted values are negative because Jan is premium to Feb – just pointing this out so you can understand the charts.

Though the roll is in a free-fall, we think there is more room to come off given that the forecast is well below the market price and heat rate. Jan is premium because of Socal Citygate issues and the fear the LDC can’t serve all its load (hey, that sounds familiar, right Puget?). Early cold in LA will make a short-side a winner but late heat just the opposite. Right now, it looks warm in LA: 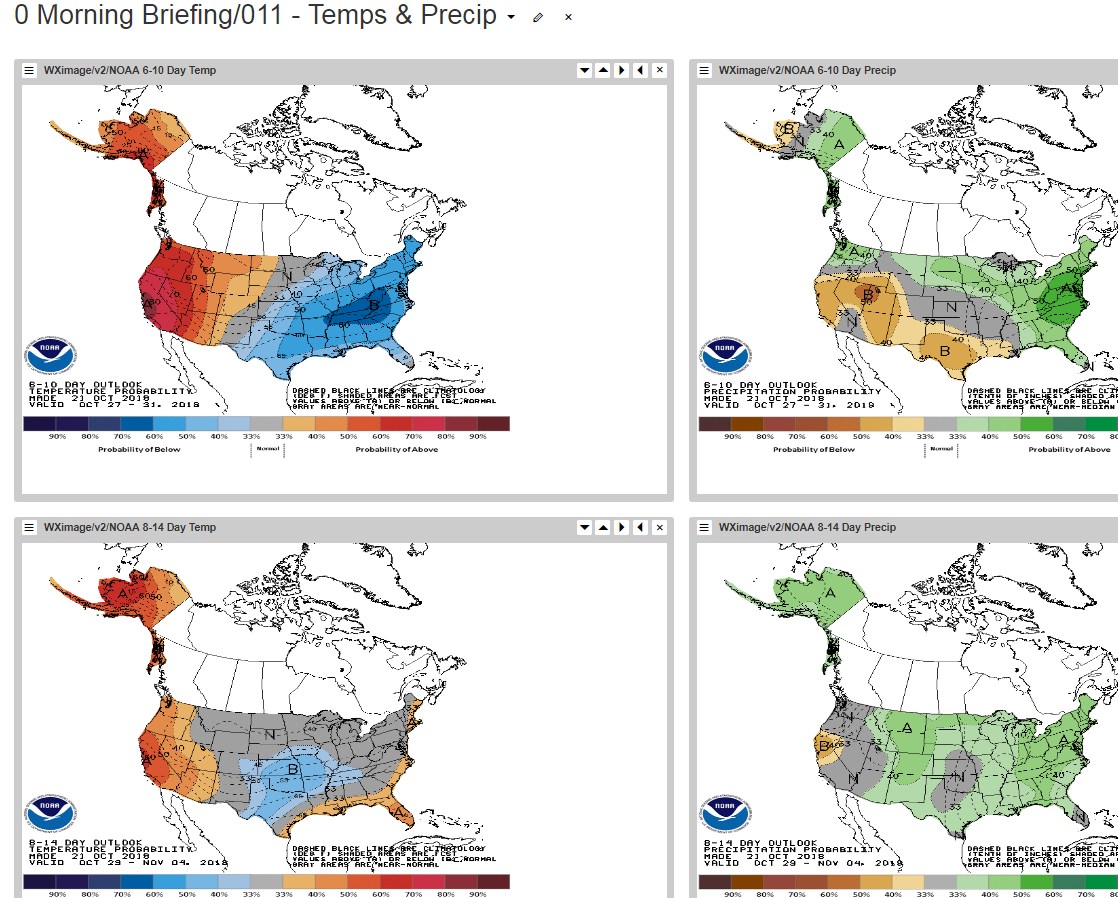 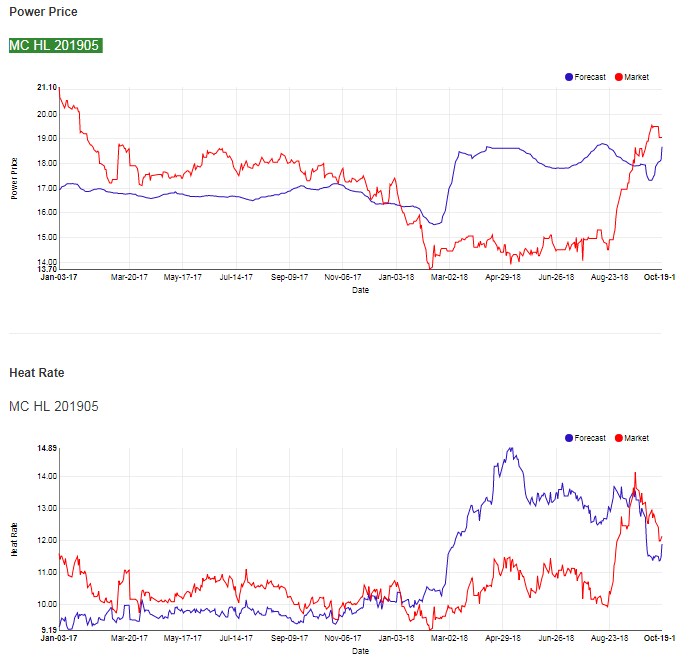 This one is easy to read, MidC HL May 2019; it’s an outright and is a shade to the pricey side. Despite the big rally since mid-August, all the market did was return to where the forecast was all along. Now we see the two in sync and would have to pass on this opp. It is way too early to make any Snow or Runoff bets; sure, things are dry now, but a single storm can reverse 22 days of dry anomalies. Way too early to make any water bets at MidC; instead we’ll look for irrational fade opportunities. 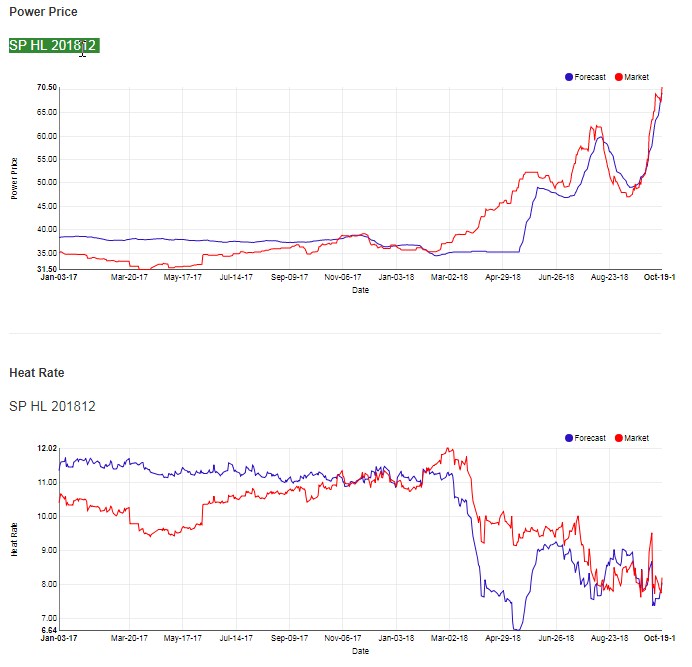 Another outright, Dec SP; and another reasonably priced bullet. Pass. 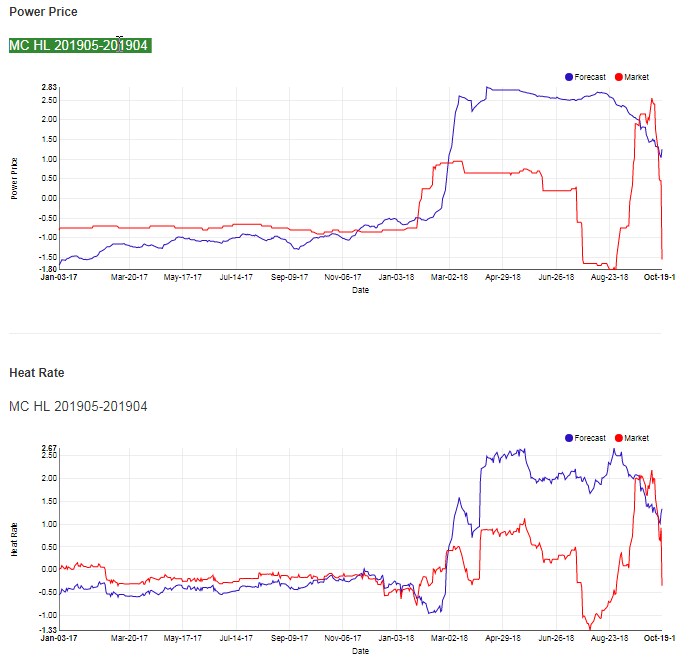 OK, now this is interesting, the MidC May-April roll. The market is confused – it loves it and hates it, now it just hates it, so we love it, long time. The market is under in both price and heat rate. Let’s try to rationalize what happened. All of this most recent move, by the way, is Enbridge. The thinking is either the pipe’s not fixed and returned to full capacity by April or the preceding months will be so insane the madness will spill into April. The former argument is probably groundless; Enbridge is fixing the pipe next month. The latter may have basis but shouldn’t that be reflected in the Sumas contracts?  The forecast reflects forward gas; the power market doesn’t. 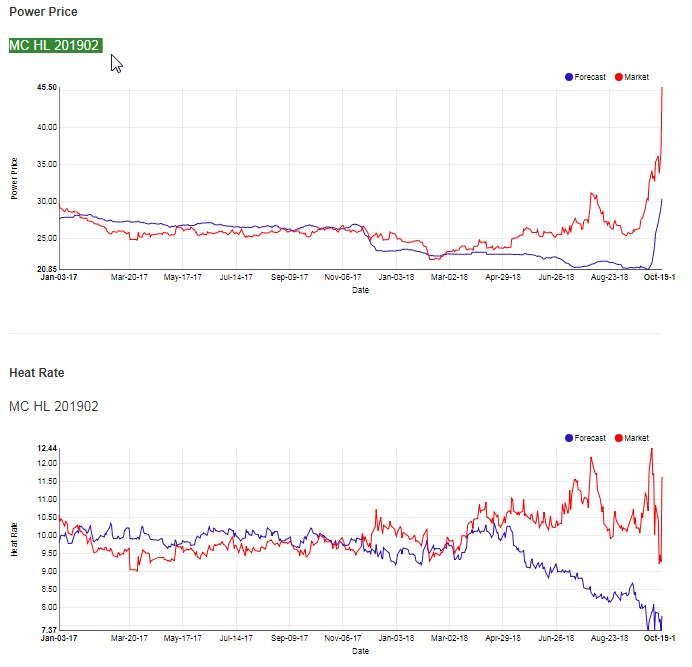 More fade the dysfunctional power market, this time in Dec MidC. Not an easy thing to do, but a rational person would draw no other conclusion given the Market-Forecast deltas. Also, look closely at the heat rates, they rallied back to near contract highs after gas soared. Contrast the market heat rate to the forecast, which cratered. Do you recall SP15 heat rates this summer?

Let’s think through what happens if winter is at the low-end of Enbridge’s range – the 900 MMCF to Huntingdon. First, the MidC will quit exporting to California and might even import energy. Between the DC and the AC, that is about 4000 aMW that can serve MidC. Most likely the I-5 gas turbines are not going to run the entire winter like they usually would.  How much capacity is potentially impacted? 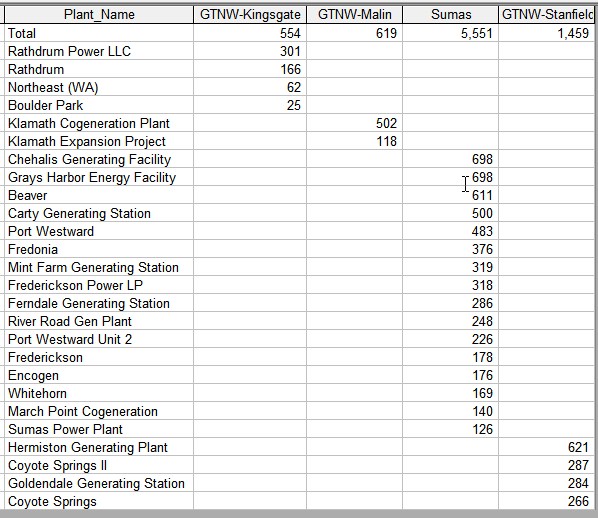 GTNW plants are not impacted, aside from capturing higher plant factors, albeit at probably much lower heat rates than they would have otherwise enjoyed. The Sumas capacity totals about 5500 MWs, which is not too much different than the potential imports from California. The ultimate wild card in all of this will be how much hydro energy is generated. But, before exploring that concept, recognize that not all of this Sumas capacity will be idle. Port Westward has Mist storage, and on warmer days the rest of the turbines might run, at least the lower heat rate ones should.

We mentioned the unthinkable – the Northwest importing from the ISO. That concept must send shudders of dread down Folsom’s spine, huh? We already seen hints of that, check out the line loading on the AC over the last ten days:

Does 2018 jump out, or what? Only 2006 had lower flows; so my suggestion that the ISO might become MidC’s energy bitch may not be so outer space after all.

Back to that wild card – Hydro Energy.

This table reflects actual energy (aMW) from the Northwest projects by Water Year Ending as reported by the COE. November and December are going to be the tightest; most Decembers have averaged around ten gigs whereas Jan and Feb are closer to 12. But the more interesting takeaway is the volatility across the water years. Take Jan, for example, with output ranging from 9.1 to 12.9; that is a 3.8 gig swing, which is like having all of the Sumas gas capacity fully fueled and running. 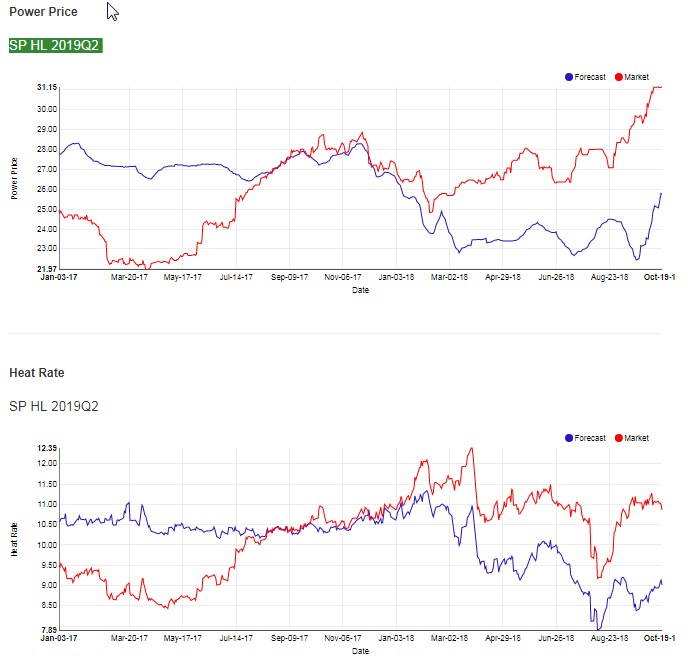 The first Q, SP15 Q2. We hate shorting the big bullets, its a big bet, but would be tempted here. The market has soared, all off of an expectant hot and bullish June. Heat rates have fully recovered but if gas prices blow out heat rates will get crushed. And, the Sumas issue will be in the history books, and the Northwest will be back to exporting. The problem with shorting this is precisely that if the Northwest imports power from the ISO those ISO prices will go bonkers and you won’t want to be short anything. 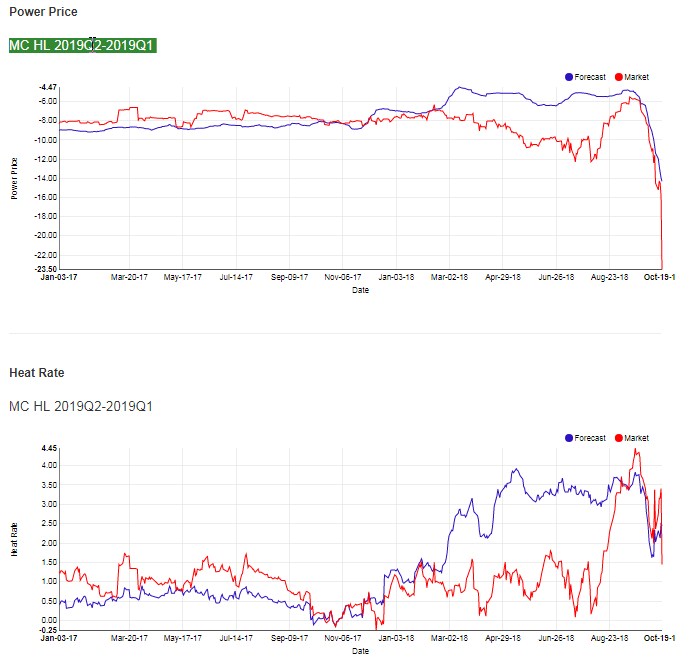 A Q roll and a potential executable opportunity; This is the Q2 to Q1 (Q2-Q1) at MidC and has completely melted down, well beyond the power forecast price. To support this bold price you are already banking that the Q1 hydro is on the low side, not sure you can make that statement today. 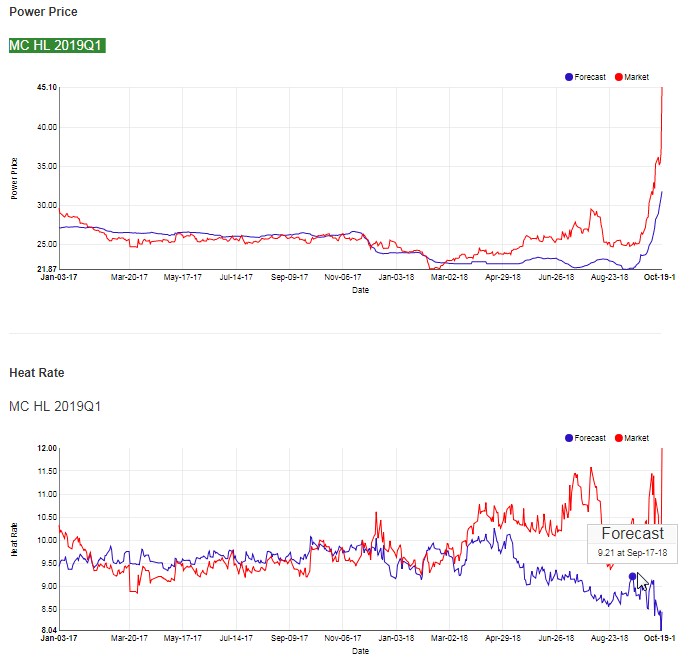 This is the Q1 outright and note the collapsing heat rates in the forecast, yet the market heat rate soars in sympathy with price. This is over-priced, but who wants to stand in front of that runaway Enbridge freight train?

Just as last summer was one of the greatest short ops in the history of west power, so shall there be fade opps that will make grown men cry next summer because they didn’t jump in. For now, I think you have to play the rolls and spreads and stay out of outrights; and if you can only do outrights you better be buying on the cheap.