By request, I’ll be resuming my market reviews every Monday. These will rotate between SP and MidC with occasional comments on Palo and NP15. The first section will examine a few fundamental developments taking place in that hub; then I’ll use APT to filter out interesting opportunities (Hedging or Spec).

Since Sumas is the new Socal Citygate (Bellingham Citygate?), we’ll start with MidC this week. First, the fundamentals. As everyone knows, an explosion took place on the Enbridge pipe near Prince George BC. During the first few days, the flow-through went to zero but now the 30″ parallel pipe has been re-pressured, and gas is flowing. As of this writing, Enbridge has not announced a timeline when the 36″ pipe will start flowing gas.

We’ve made a new dashboard to help track those impacts. After almost a week, the effects are stabilizing to around a 600 MMCF cut at Sumas, and about 250 MMCF drops at Chehalis (350 MMCF cut in Puget Area Demand). Most of those haircuts came from power plants; the Northwest isn’t cold enough to drive much heating demand.

Fortunately, the weather is unseasonably warm. 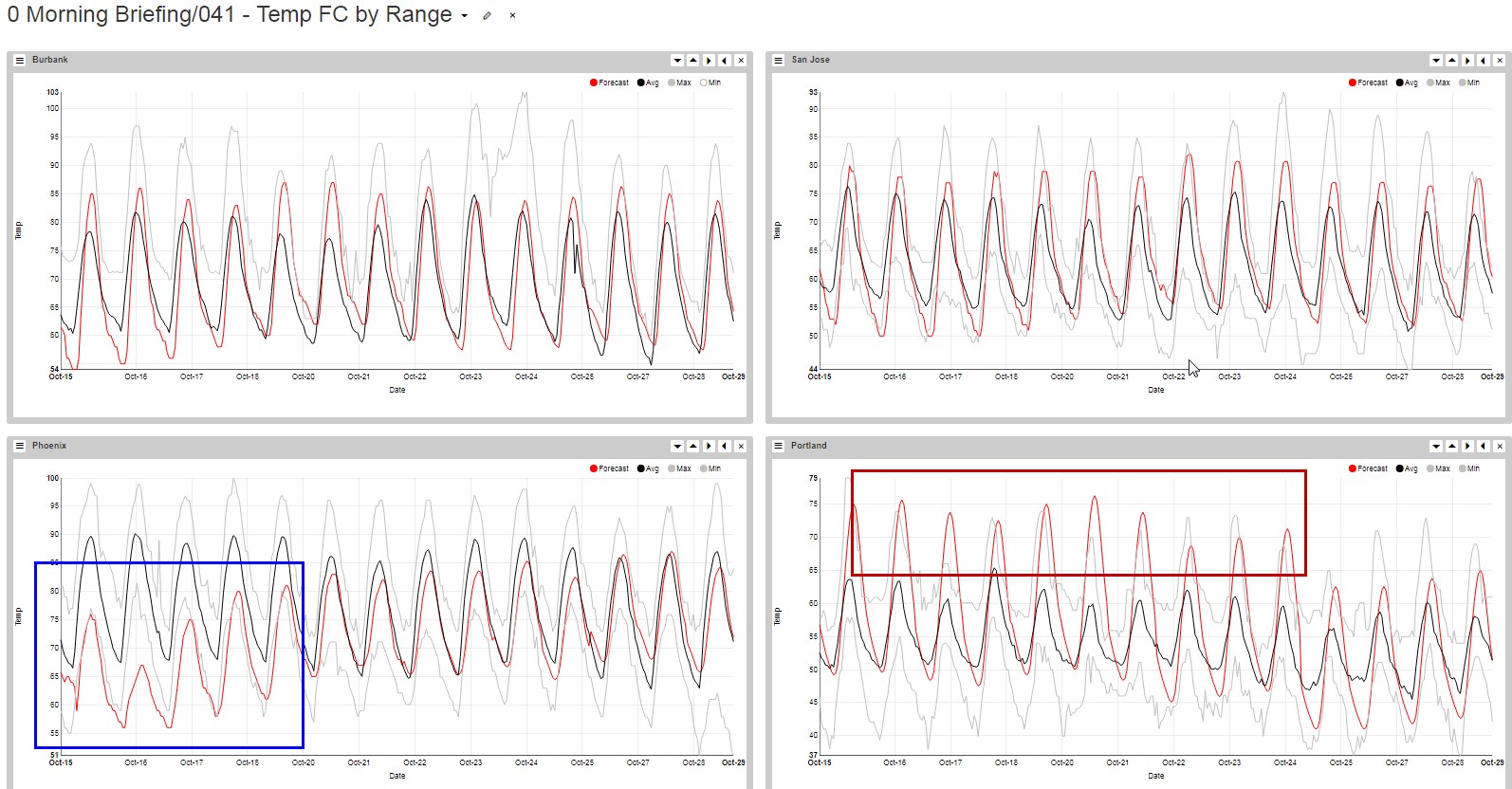 Portland is poised to set a string of record highs over the next eight days – so is Palo, but record lows in Sun City. Those highs in Portland are just bearish which is precisely what BPA needs while all Northwest utes try to figure this out.

Ansergy’s Gas Demand report summarizes all the LDC load by day; the above plot is an aggregation of all LDCs in the MidC region.  It is those spikes which will create problems if the pipe is still impaired; those reflect between 500 and 1000 MMCF of additional demand, over and above what is being burned today. But it isn’t just gas demand which has the utes worried, MidC is a winter-peaking region. 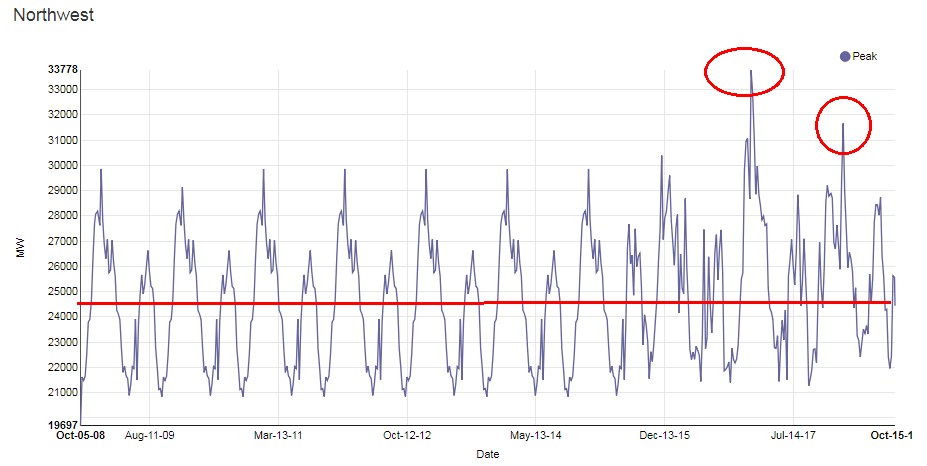 Loads today are on the lower end of the annual range. Should the weather turn cold, not even bitter cold, the MidC will see an additional  5000-7000 peak load on top of that incremental one BCF of Res/Comm gas demand.

This is also a new dashboard, one that tracks the price impacts of the Enbridge explosion. The first plot is Sumas spot; the second is a summary of all WECC spot markets, and the remaining are Sumas term prices. Using Henry as our lodestar, it appears the market is assuming reasonable odds the fix is in place by February. More system demand peaks have occurred in December than any other month.

One interesting aside – who gets the gas that is flowing?  Canada or the USA? After all, it is Canadian gas. 85% of the Fortis load is served from the pipeline. Clearly, Vancouver and its suburbs will be impacted, or will they? There is enough gas on the 30″ to serve most, if not all, of the Fortis load – if you cut flows at Sumas to zero.  Hmmmmm, interesting, huh? Trump might even wink his eye should that happen, after all, Washington and Oregon are liberal bastions that would sooner vote for Satan than Trump. 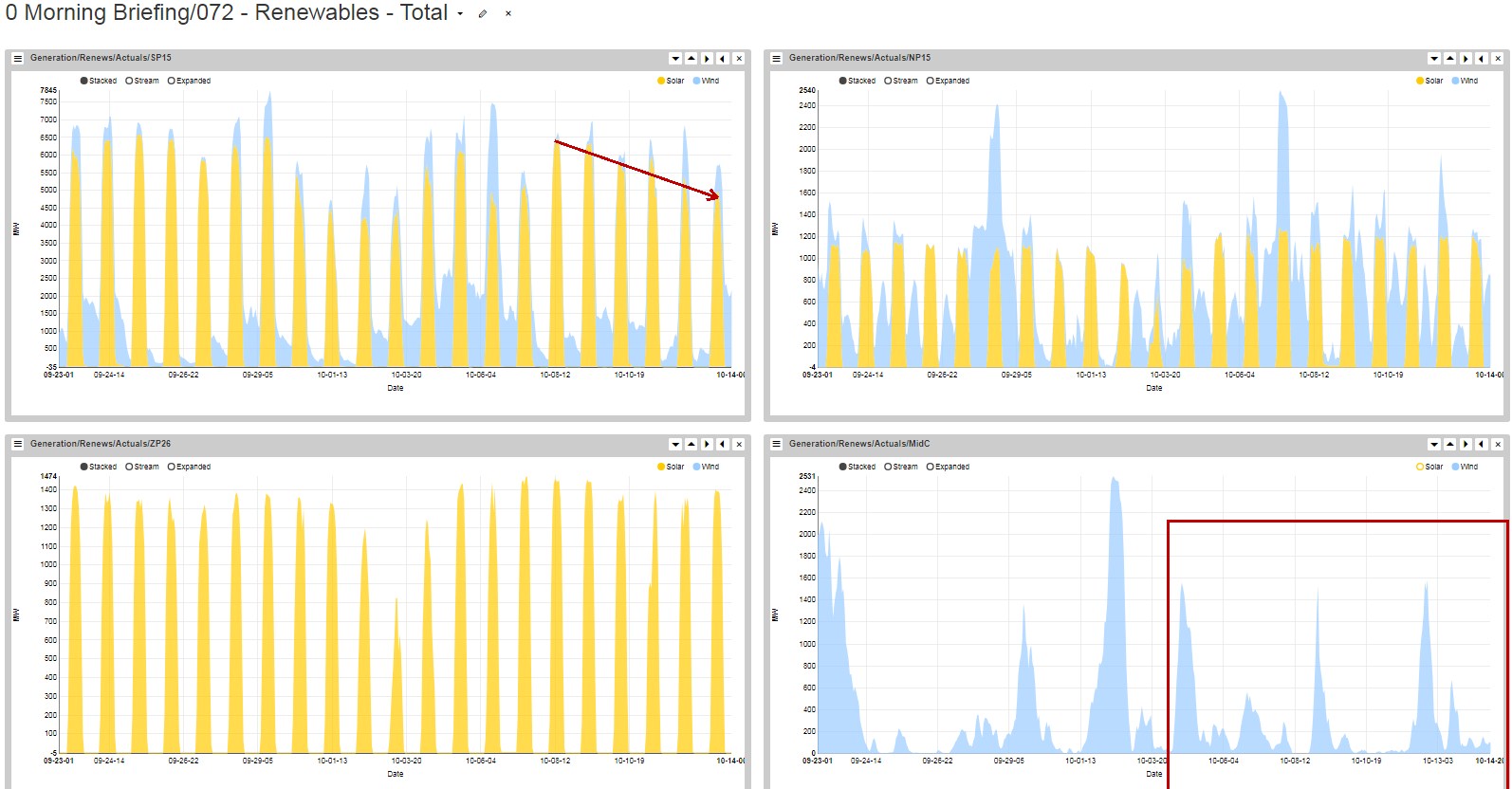 The lack of wind hasn’t helped things in the Northwest, and it looks like SP’s solar has taken a haircut. PV #2 is down for its derate; we think a Diablo unit will be down in the next 30 days for the same.

Production at Coulee gapped up post-explosion; flows at BC reacted too:

The Peace is a base-loaded machine, and for a few hours, the flows on the Columbia at the International Border set ten-year highs. I guess there are many ways to skin a cat, if only it would start raining like in the days of Noah, then none of this would matter. Thankfully, the DC is down. 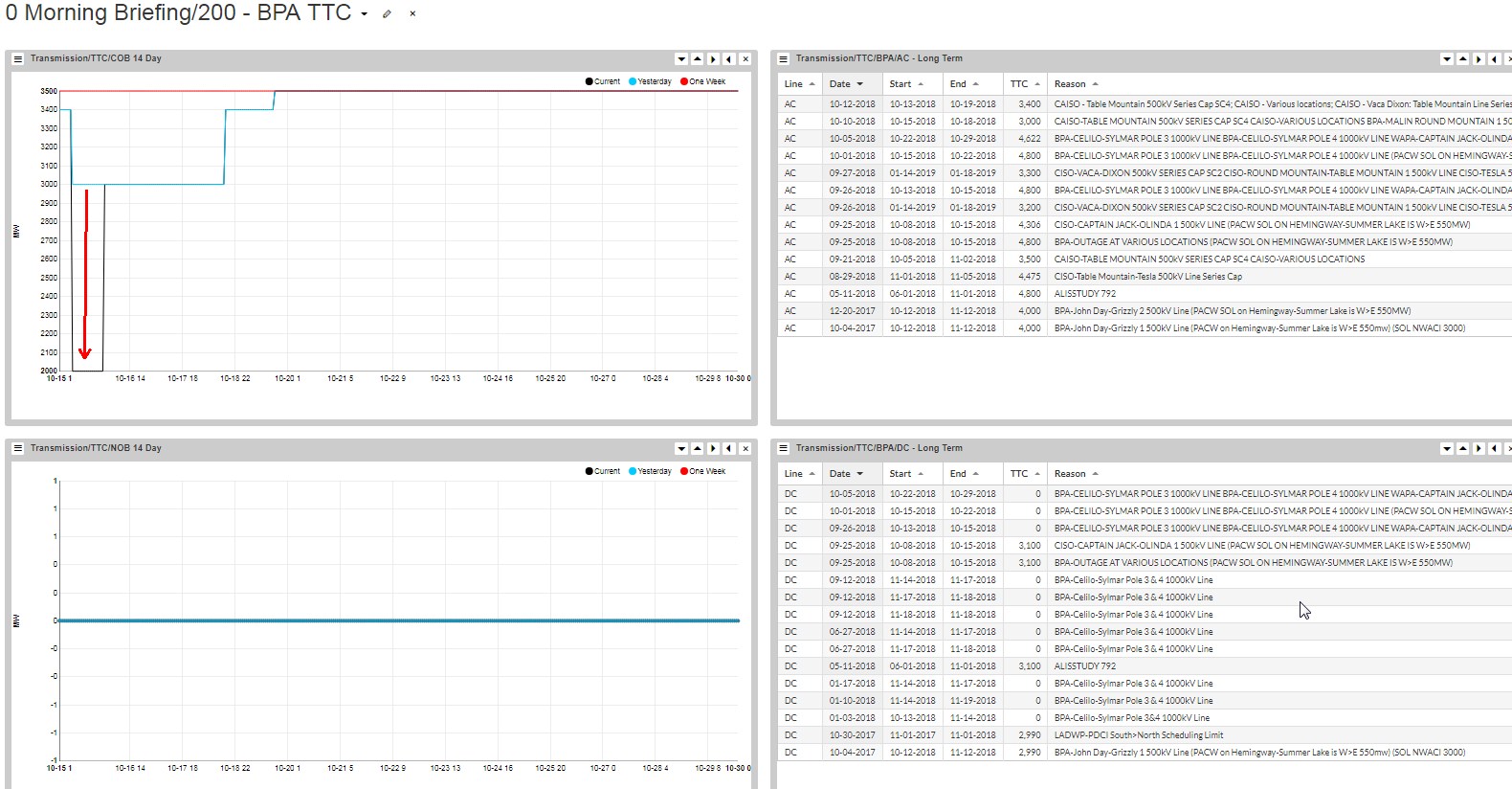 We also took note of a one-day cut on the AC; all of that helps the MidC as everyone scratches body parts trying to figure out what to do.

BC decided to quit selling as much energy to MidC, don’t blame them, though they don’t have any gas turbines in the province so not sure that has anything to do with a pipeline.  The MidC decided to quit selling energy to the ISO, both on the NOB and COB lines, though the NOB has nothing to do with the pipe issues. Path 26 is flowing to SP and Path 15 is flowing less to NP rendering import haircuts in both directions. 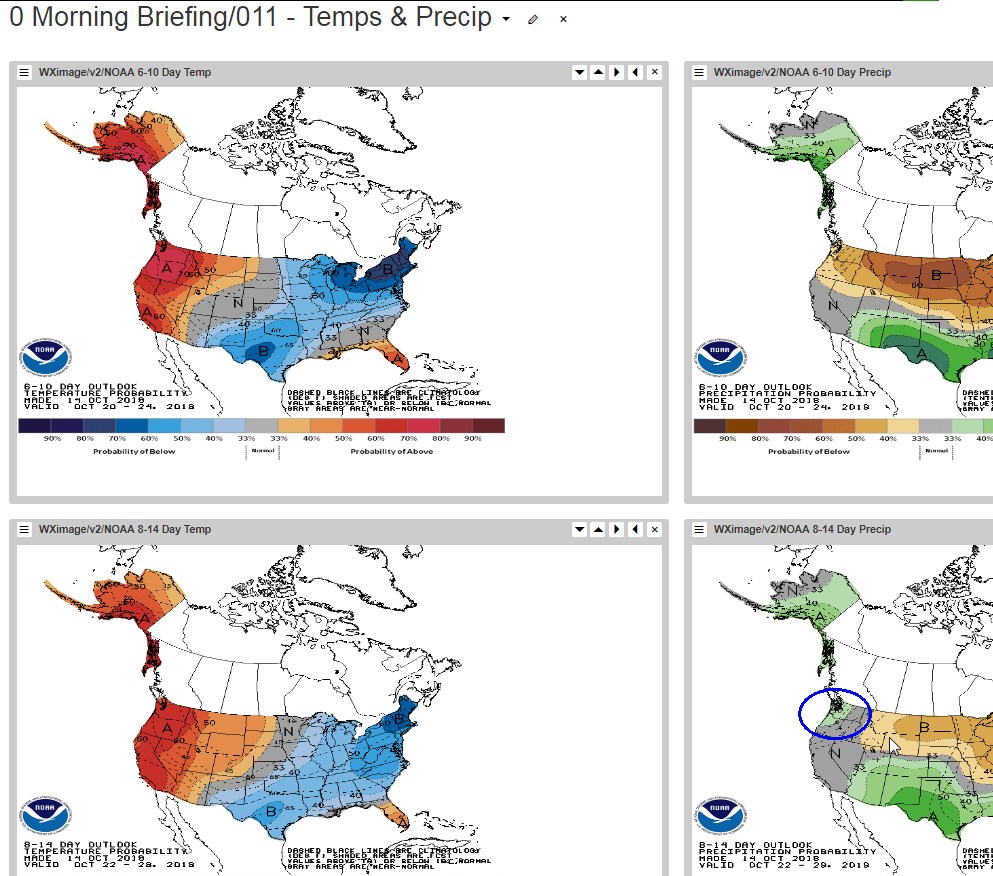 The 8-14 shows hints of resumed rainfall in the Northwest, for now, the hub is Sahara-like. Great for fall golf, not so rosy for producing hydro energy. The good news is the warm anomalies; both power and gas demand will remain at the low ends of the scale for the remainder of the month.

Now, finally, on to APT.

The following were pulled from this sub-set of APT. 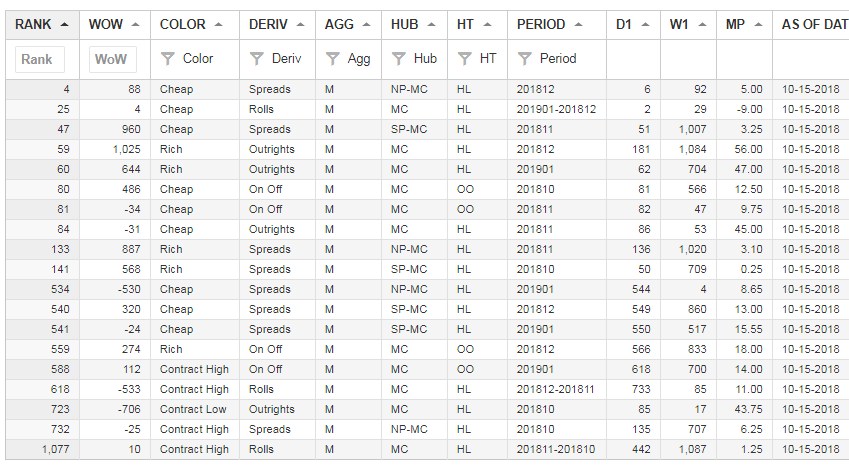 These trade opportunities are all MidC or MidC spreads, rolls, and on|offs and are sorted by Rank. I’ll post a few comments on the first 6-7. All of these markets have been materially impacted by the pipeline explosion; the question remains if the price moves were reasonable. Each plot includes Price and Heat Rate; all APT ranking is based on Heat Rate. 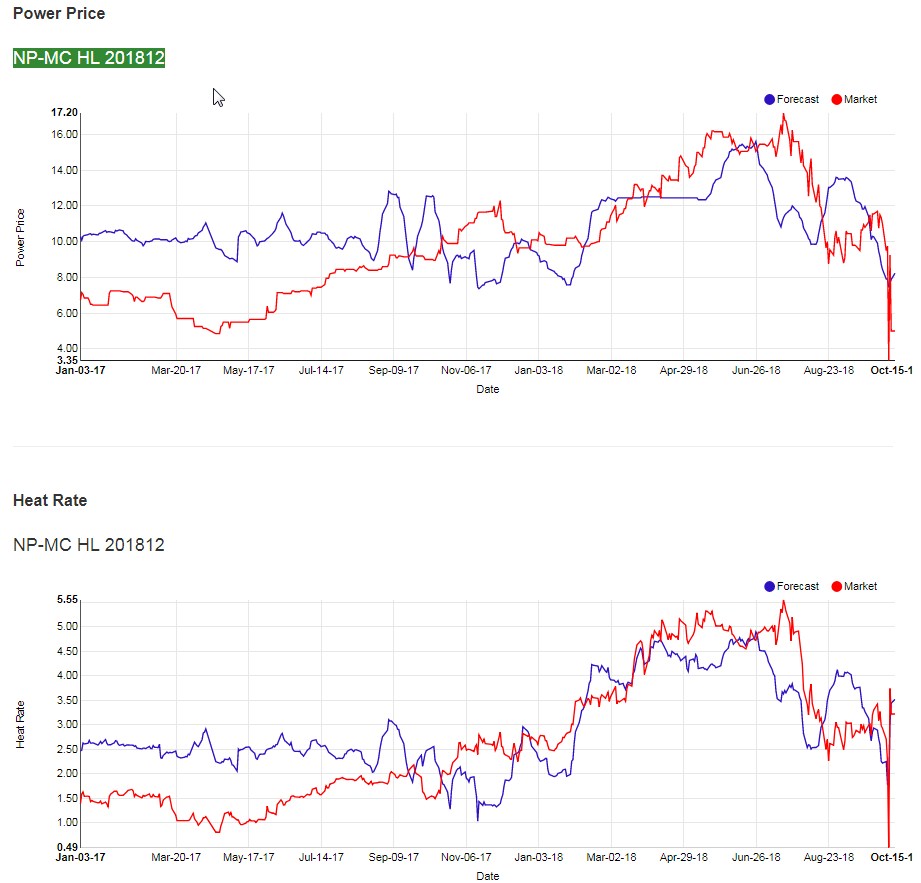 This is the NP-MidC Dec HL spread and is cheap. At these levels, the AC cannot begin to pay for line losses so, in other words, there is no energy flowing on the line. A couple of risks with that assumption. First, the line can flow both directions, if the MidC gets tight enough energy will flow North. Another risk is a wet November where MidC doesn’t need its gas units. What if Enbridge announces the pipe will be fixed in two weeks? After all, this isn’t Socal Gas and BC isn’t the CPUC. They know how to get things done in BC, unlike our friends in Kalistan.  Finally, the DC is down for most of November, unless the spread stays tight throughout Nov the pressure on Dec will be high. Selling this spread at these levels means you are 100% confident the pipe won’t be repaired by Nov 30 – I’m not and would buy the spread. 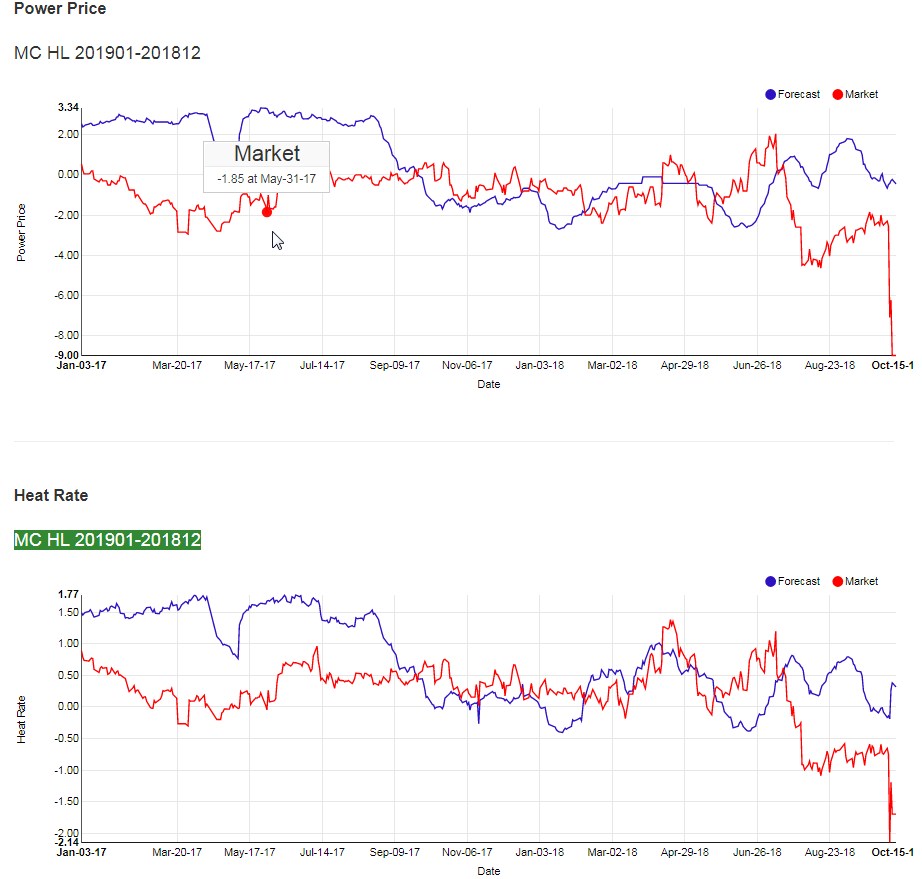 The Jan-Dec MidC HL roll collapsed while the forecast remained modestly unchanged. The market is assuming the Sumas derate for all of December and maybe part of January. However that isn’t what’s reflected in the Jan Sumas contract, which is what the forecast uses. We’d be buyers of this roll, it was oversold and is dirt cheap. 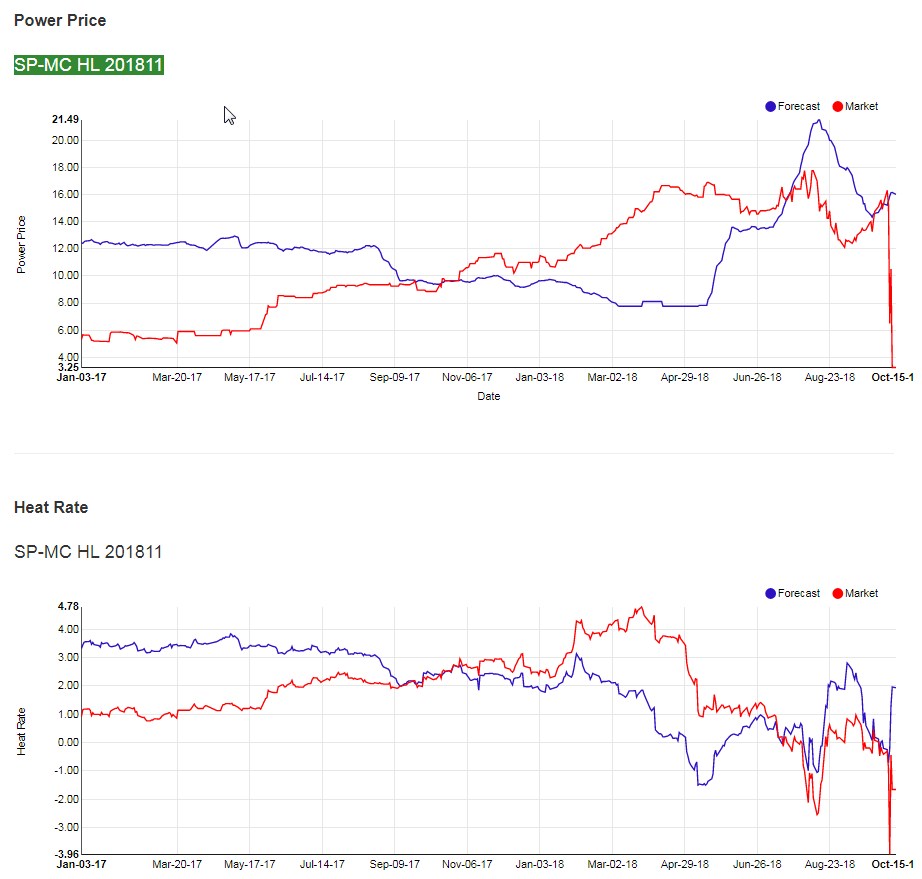 Similar trade as the Dec NP-MC, but this is Nov and SP. Let’s look at what we know. First, the pipe won’t be fixed in Oct. Second, Northwest loads will remain weak while SP’s loads will be reasonably robust, plus the DC is down, a nuke’s offline in PV and soon a Diablo unit will be off. The ISO is already into its outage regime. I’d fade this, too, but its pick your poison, you only need to fade one or two of these, they are all the same trade. 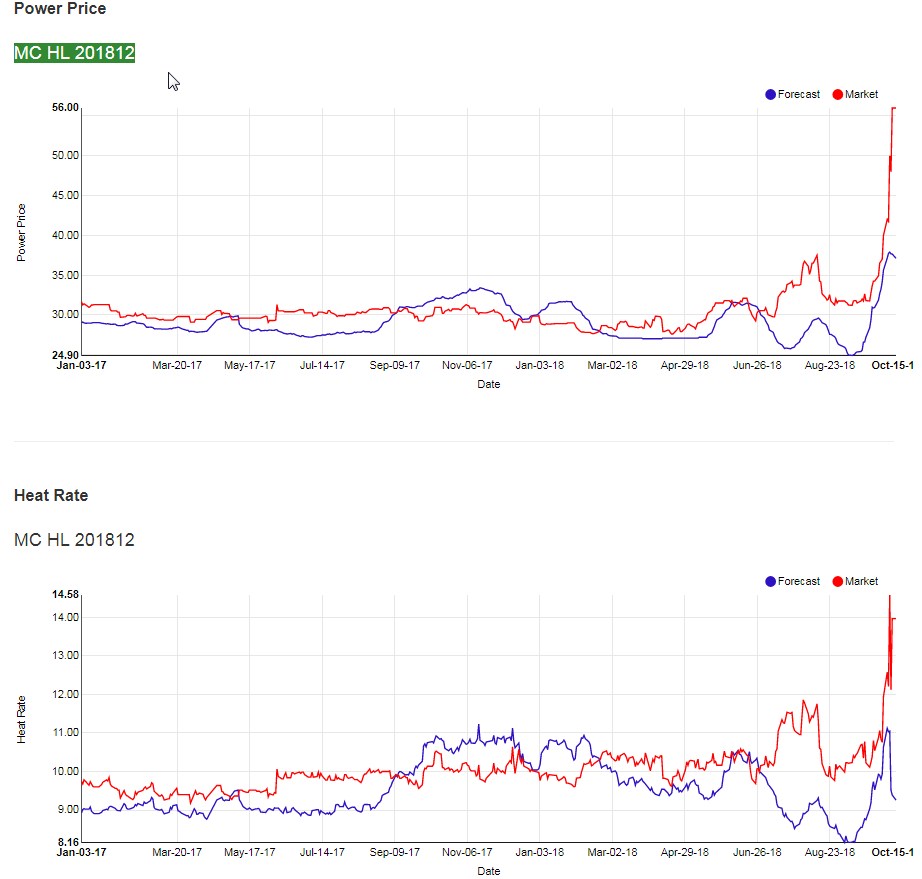 I like the outrights less, there is more risk. That said, the Dec appears over-priced both from a Price and Heat Rate perspective. Bear in mind, the forecast includes Friday’s Sumas settle for Dec, and the deltas (Market-Forecast) are off the charts. It’s back to picking your poison, but Dec right now is over-priced given Sunday’s weather outlook. 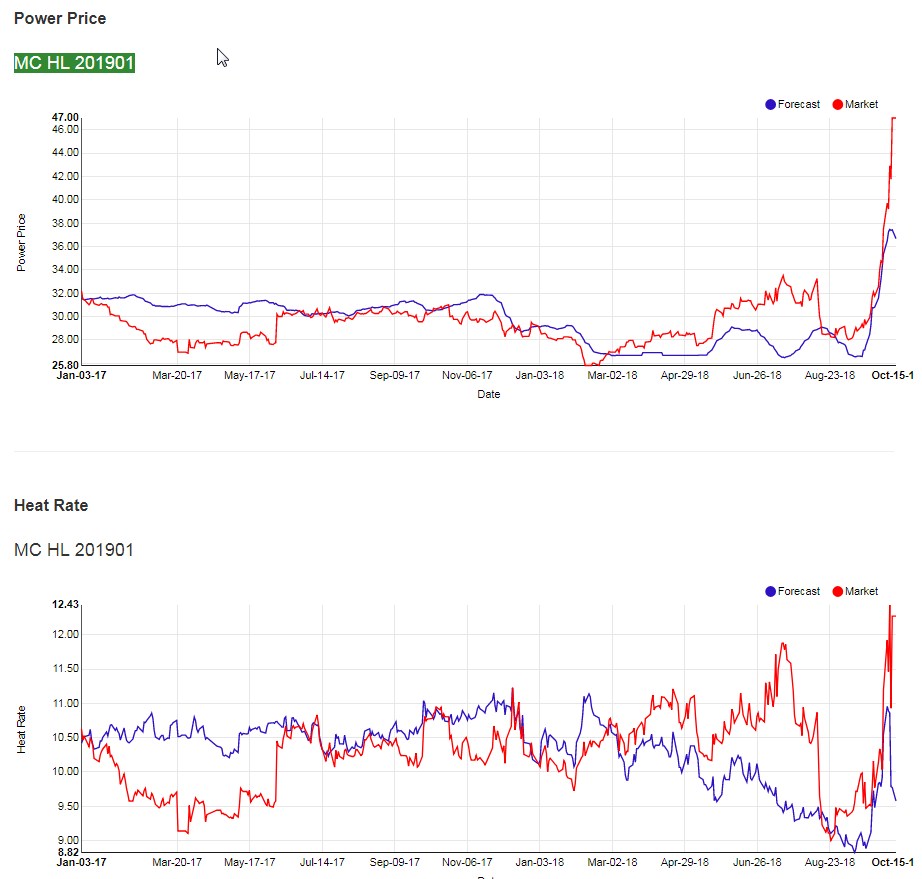 Jan is a tempered version of Dec; not as extreme and therefore not as impressive. I’d be tempted to attack both through the roll or just focus on the front. 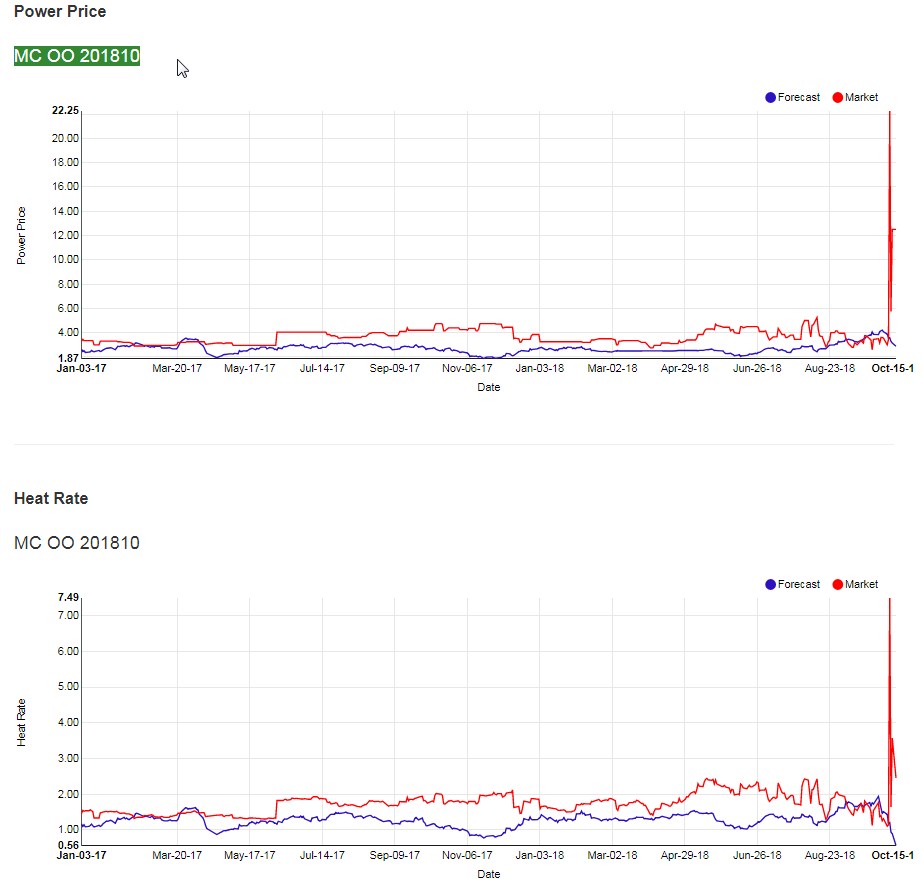 This one is exciting – the BOM On|Off. A couple of problems with how the market priced this during those first days following the explosion.  For starters, it massively over-priced the spread. This is October; there is no AC load left in the Northwest; it is heating load that is the concern, and that, for now, is taking place at night during the off-peak hours. And don’t overlook the water situation; water is tight, and if there are drafts during on peak that means cuts in the off-peak, but that’s where the load is. Nah, we’d fade this one too. 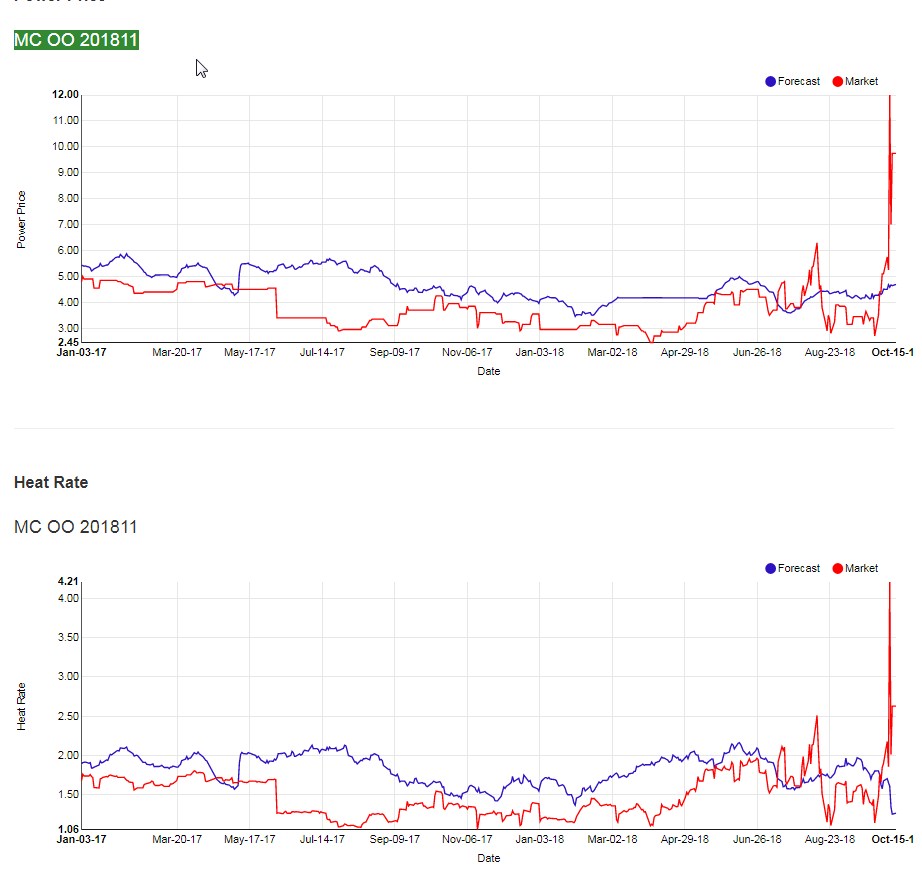 Same trade, just more MWH and a bit further out. Cash will drive the Prompt On|Off; if you are right in the BOM, this is going to tank, too. Until we see cold weather, this is over-priced as well.