The BOM continues to soar, Socal Citygate craters (cash), and it looks like LA might get hot again. Lots of news, so let’s get after it. 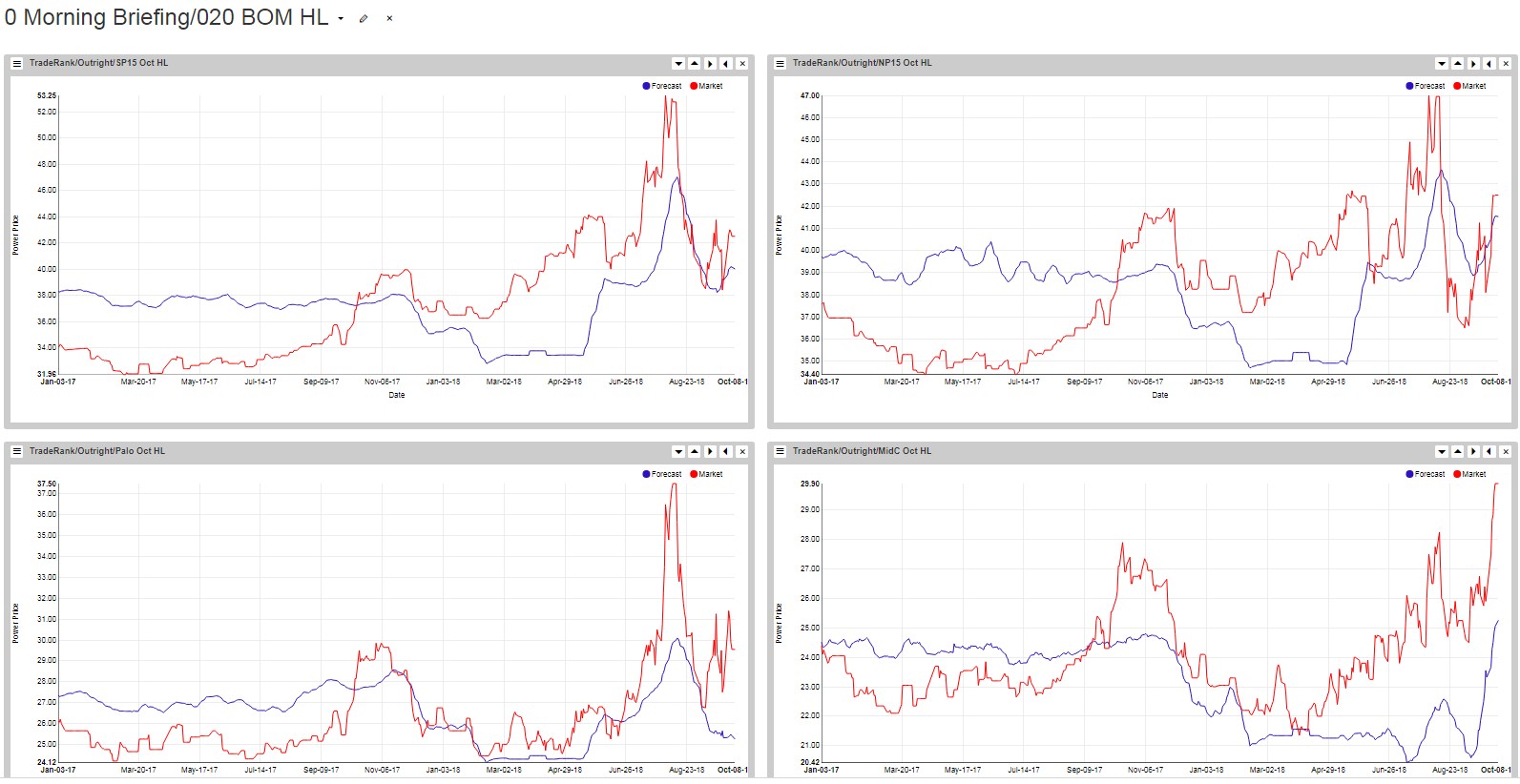 Check out the MidC, it’s now trading above levels last saw in August when cash was clearing north of $200; now cash clears $30. Some of this strength is explained by Henry Hub:

The November contract is up $0.40 in a few weeks; the rest is told by a significant tightening in Northwest cash gas: 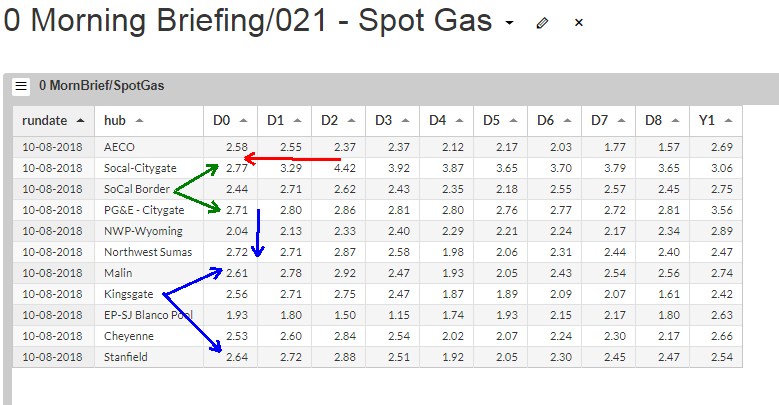 Check out the Socal Citygate | Northwest Sumas cash spread as of Friday –  a meager $.05 and Sumas cleared over PG&E Citygate – whoa! Also, take note of the Socal’s collapse from earlier last week – down an astounding $1.40 in just a few days. Cool weather is to blame, power demand inside the ISO collapsed, and prices in the Solar Ramp are trading low, sometimes negative. 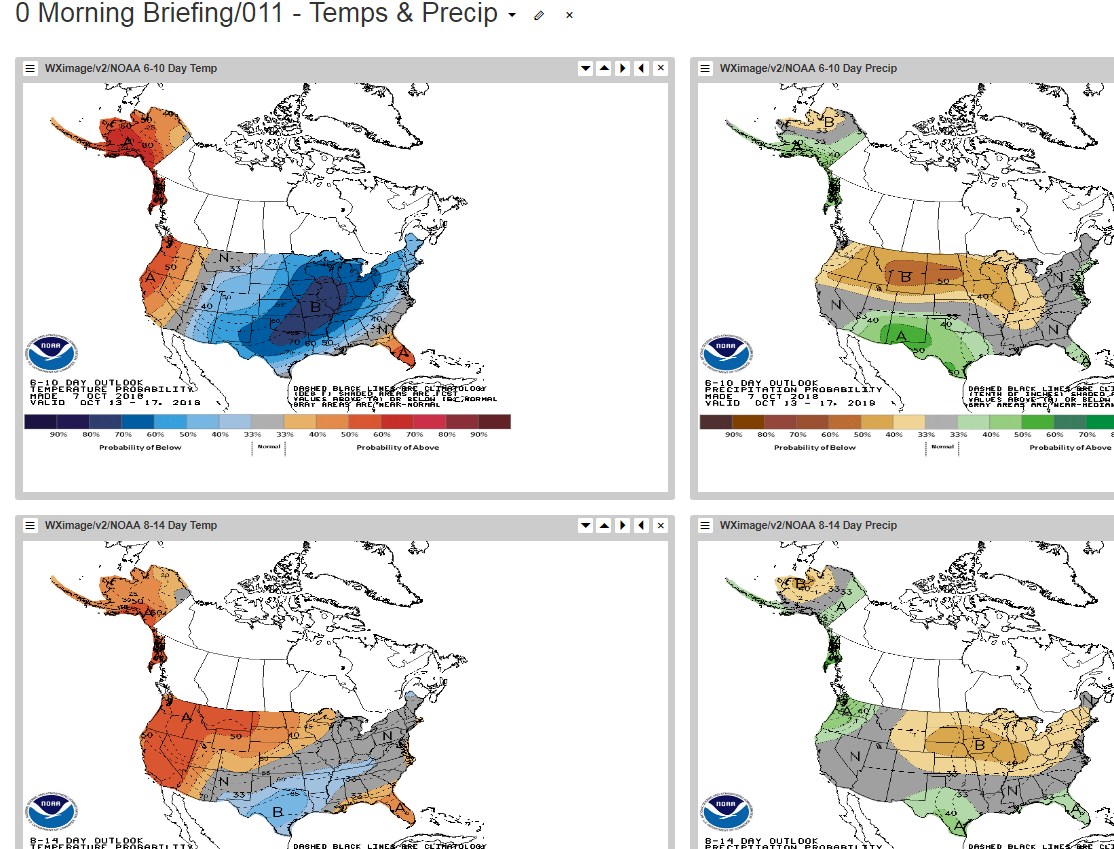 But that might change next week, NOAA’s 6-14 day plots are all hot across the load center west. 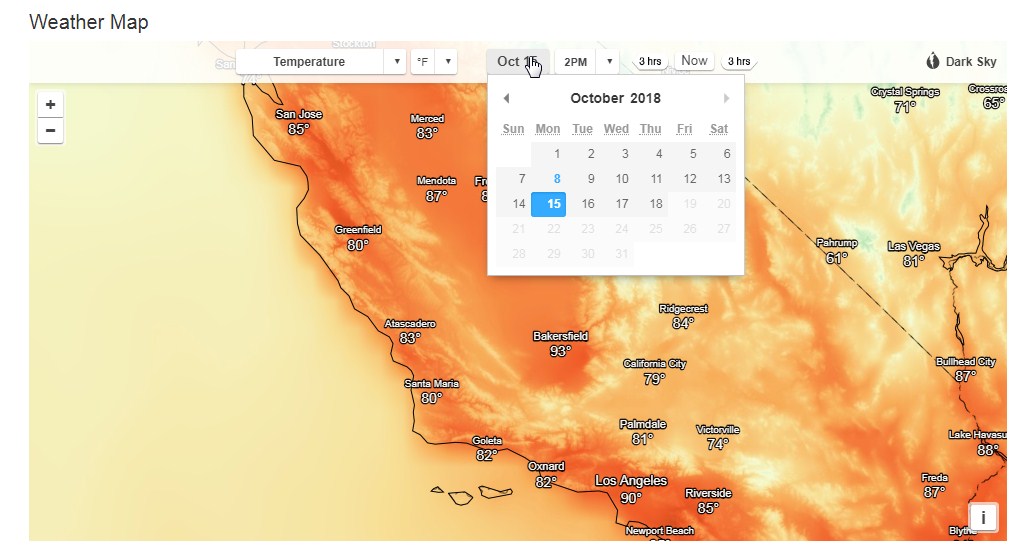 This is for Monday, October 15. Note LA at 90, 9 degrees warmer than Las Vegas; even San Jose is warmer than Sin City. Crazy, but just call it what it is – Santa Ana. Those hot winds pouring off the desert will bake the City of Angels. 90 probably isn’t hot enough to stress things, but we’d suggest watching these forecasts over the next couple of days for builds.

But “why” you gasp; it’s late October, Summer is over, right? Wrong: 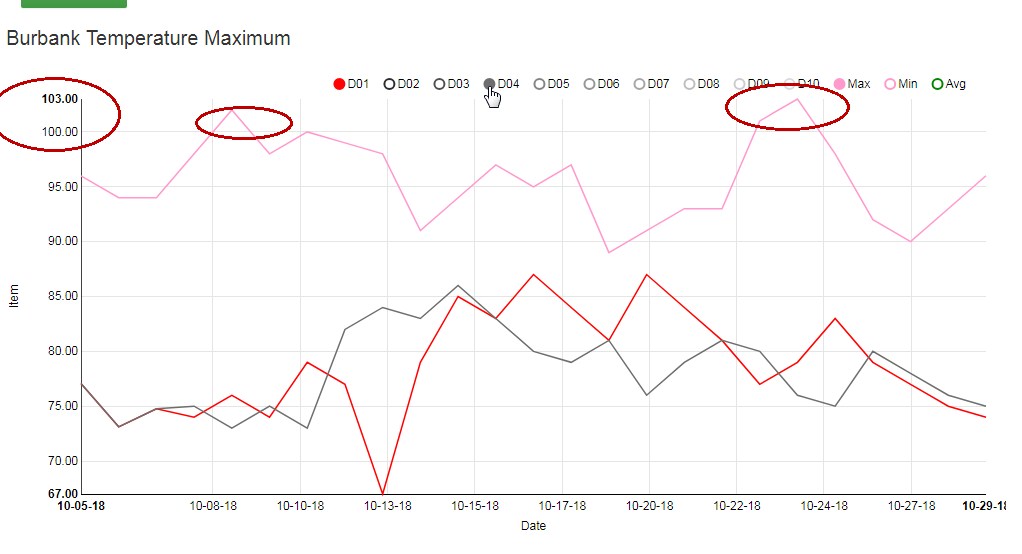 LA has hit the 100s a few times in Oct, in fact, there is an outside chance of setting Season Highs in October. This system isn’t set up to do that just yet, hence the need to keep an eye on it. If nothing else, this might be an excellent time to buy BOM SP or Citygate, as a lotto ticket the temps creep up over the week. 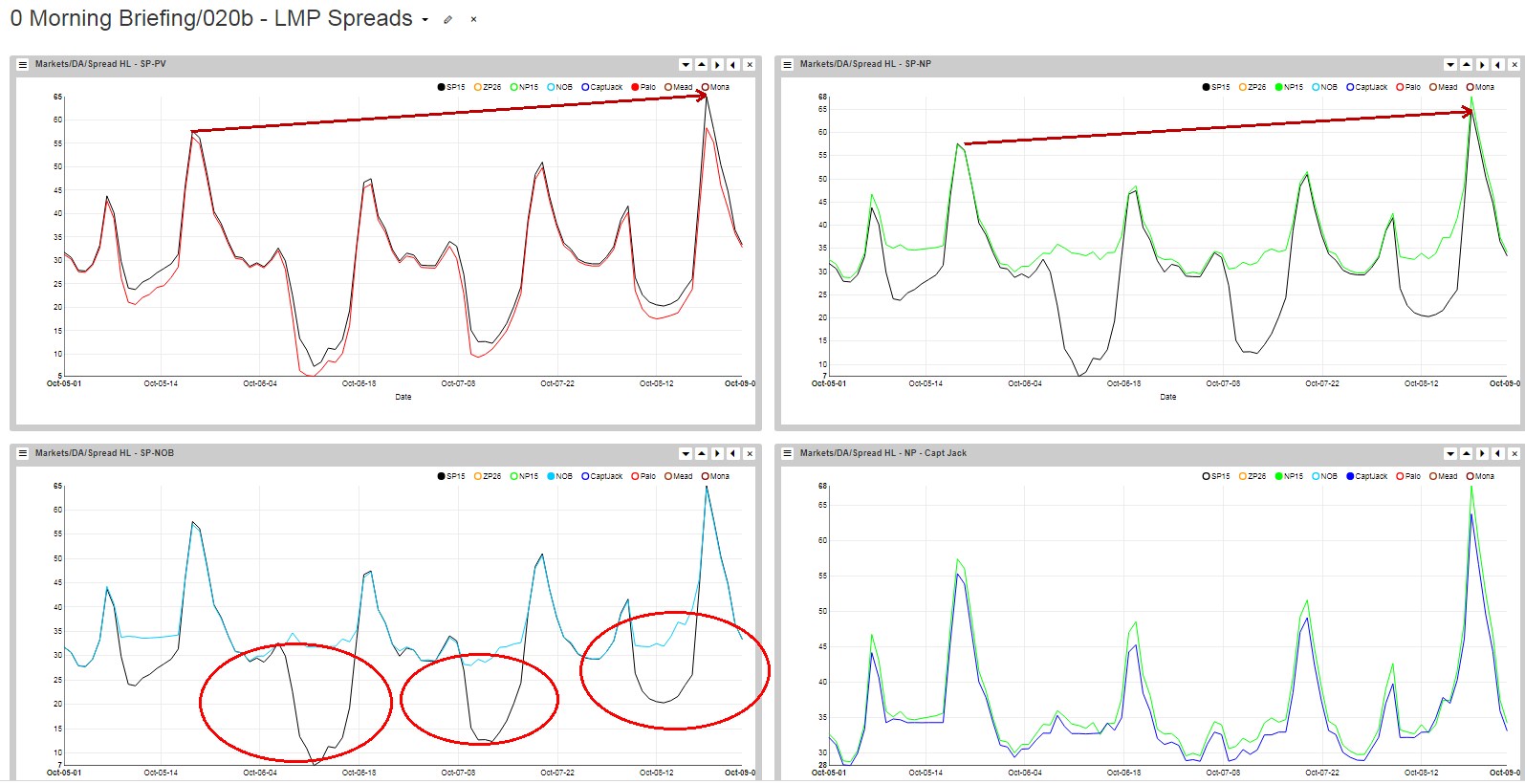 The Day Ahead LMPs rallied off of Thursday for Friday’s numbers; we also take note of the massive NP|SP congestion in the solar ramp. All the while. The Northwest remains tight to NP; there is no discount on this hours; water is too dear to them. 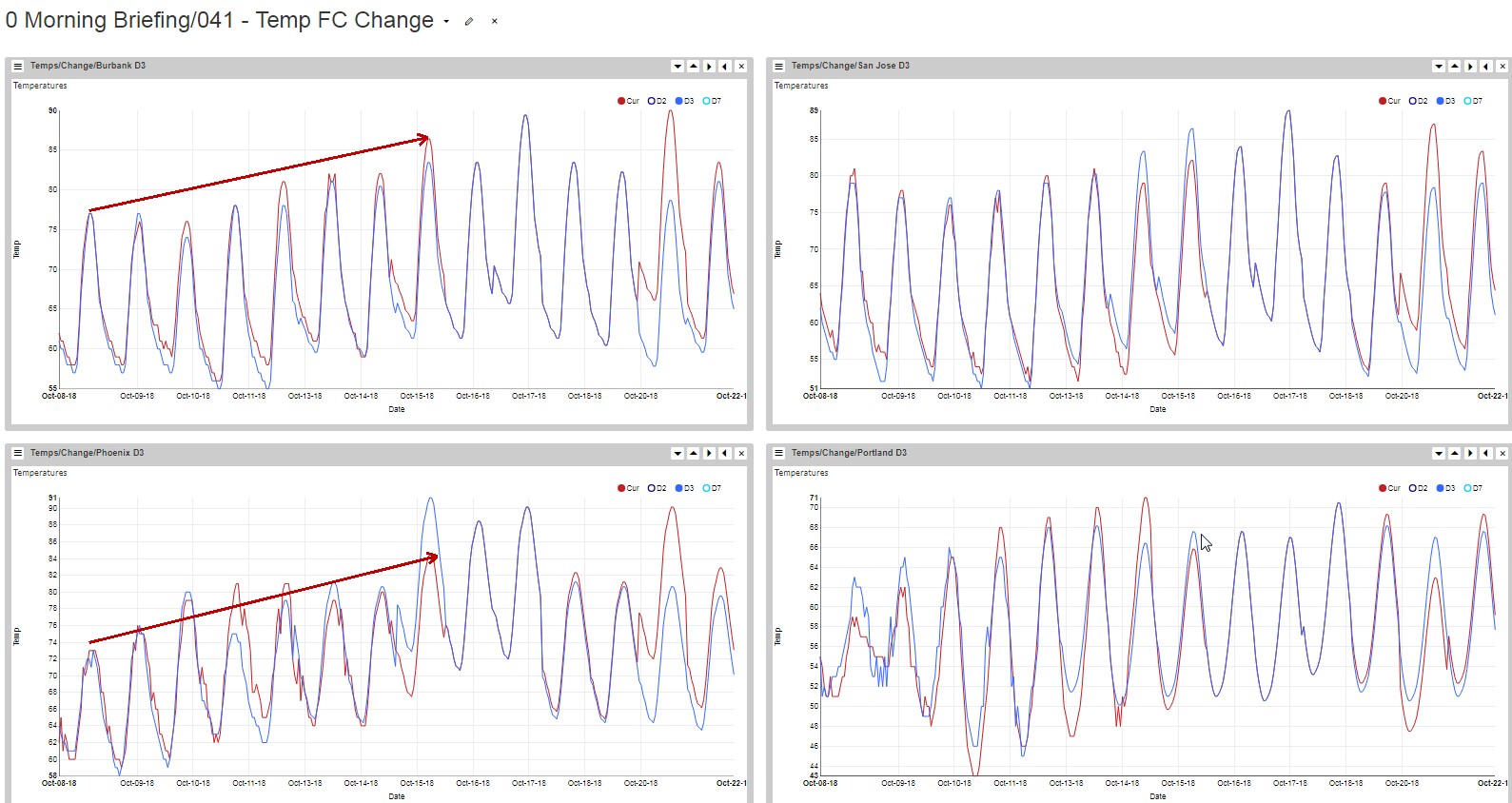 We already mentioned it was growing warmer, the above compares today’s forecast with Fridays and in many hours today’s has grown warmer. 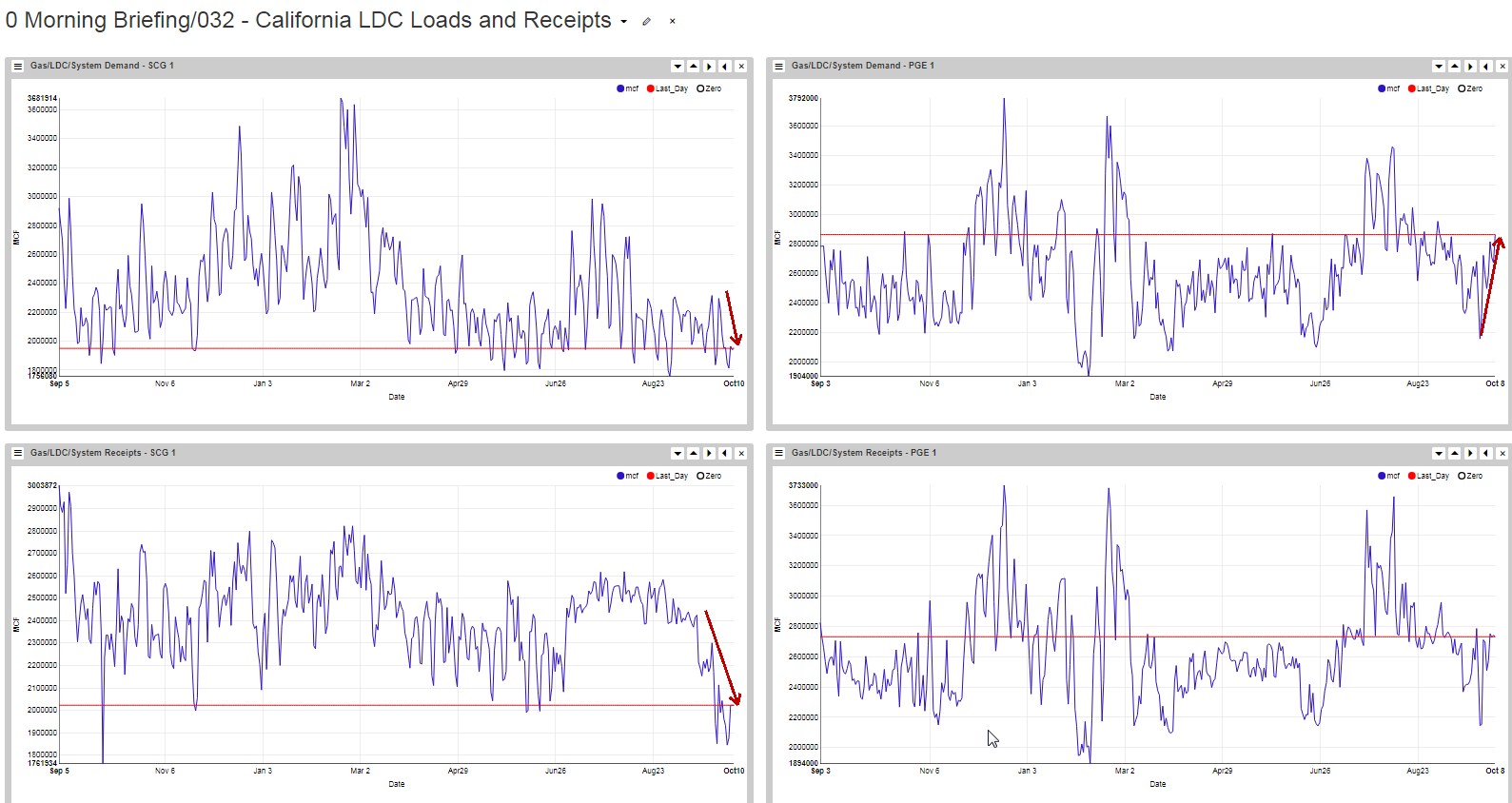 Both supply and demand are tanking in Socal; PG&E demand has sustained a modest rally, perhaps off of nighttime heating load?

Realized temperatures are cool enough, especially in the Northwest where highs were in the fifties. The table to the right measures the cumulative degree days by the station for October. 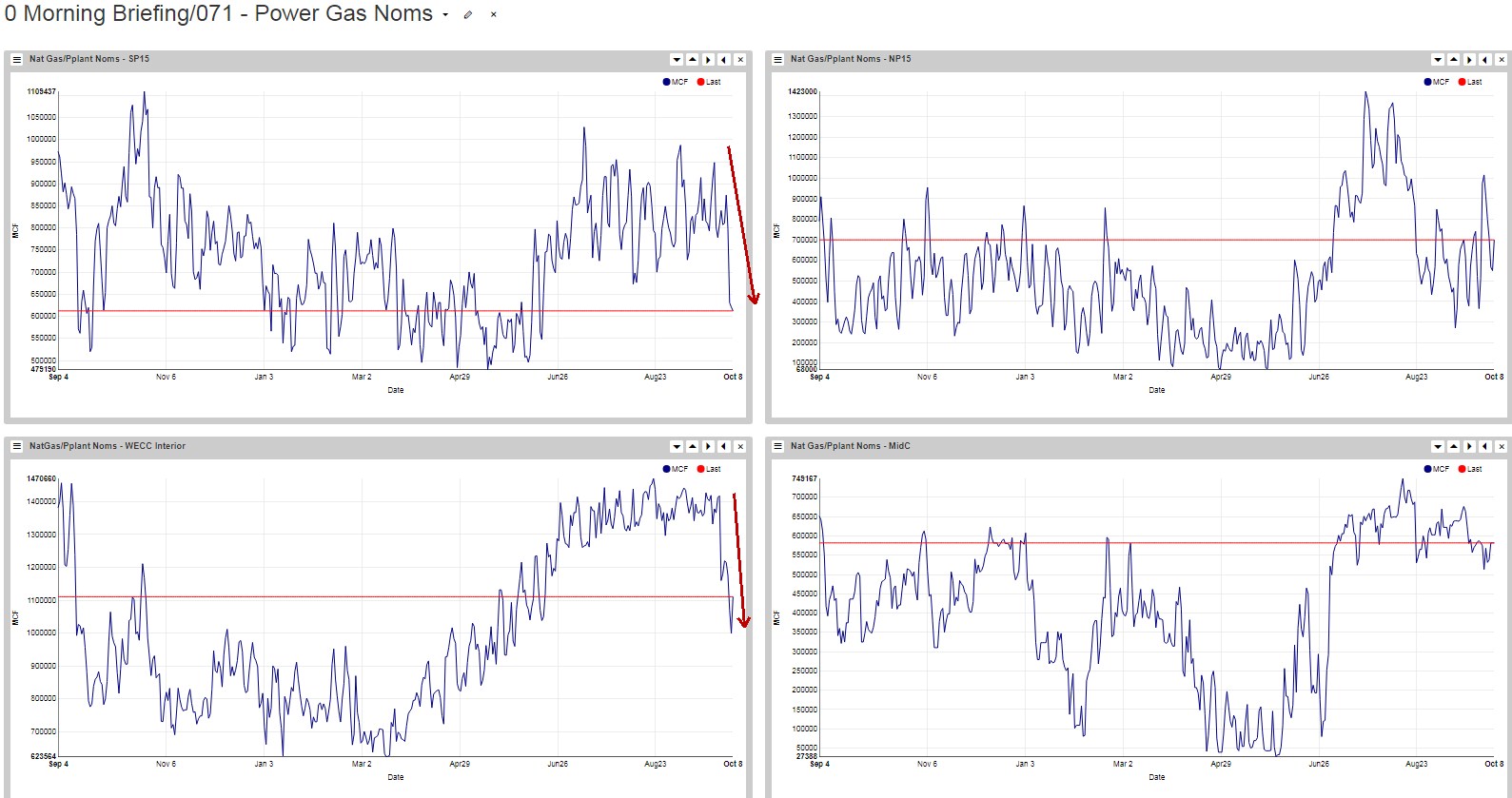 Wonder no longer why Citygate crashed; power plant burn at SP is nearly non-existent; PV too. 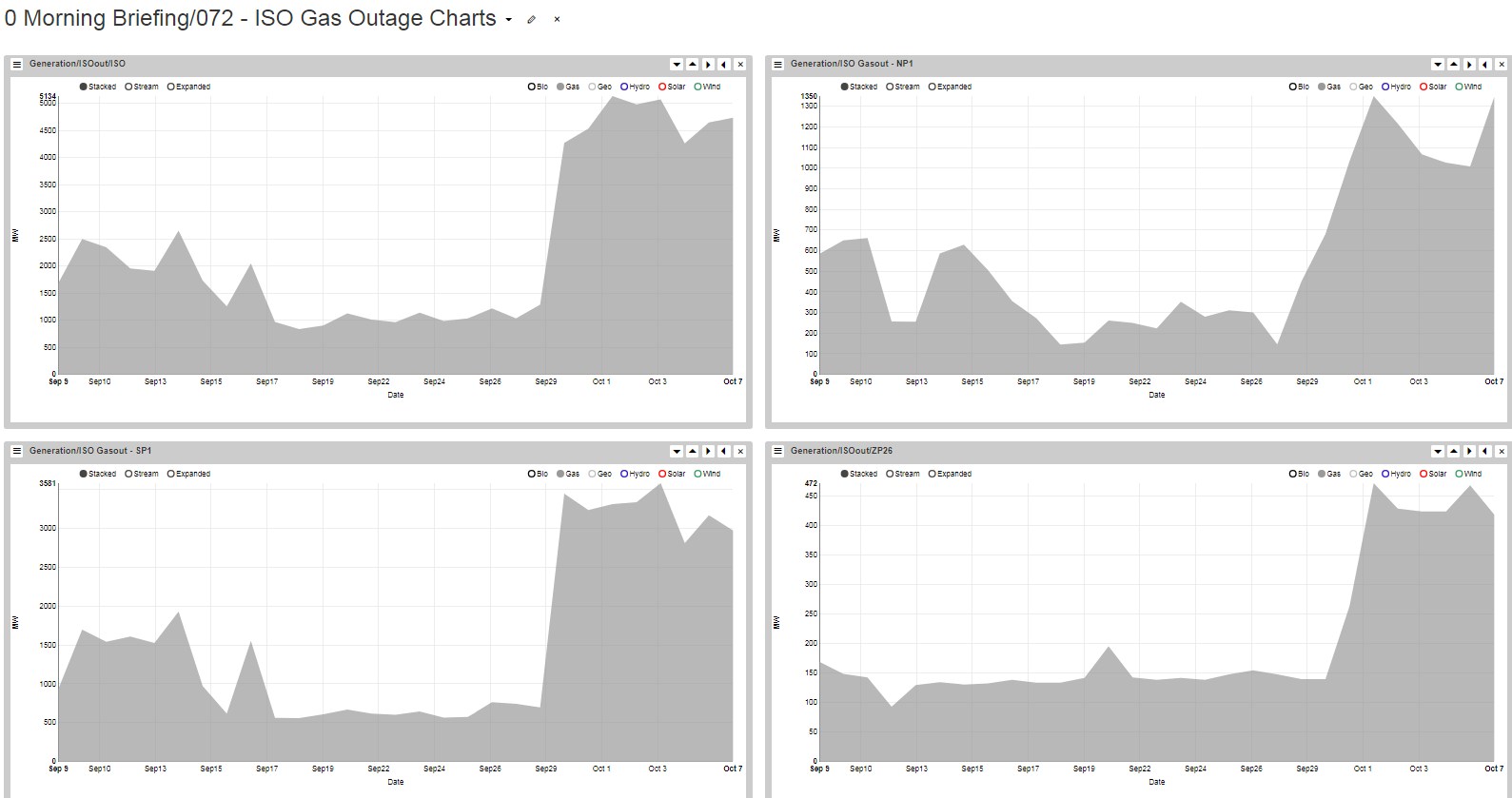 Outage season has started; all three ISO hubs had sharp bumps in gas units offline, all on the same date, suggesting most were Planned. Take those charts and project them onto Palo and Nevada, a similar situation there, too. 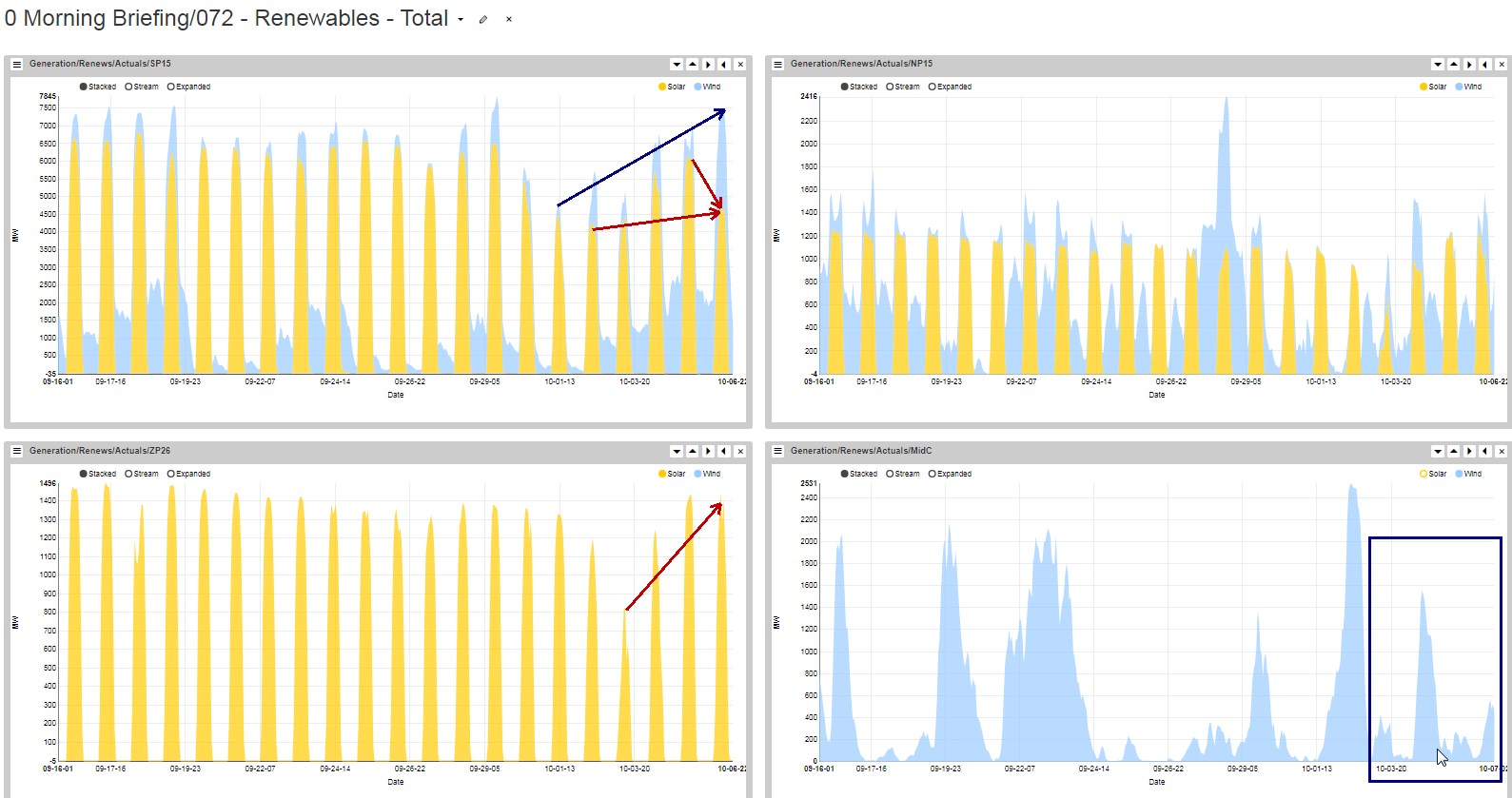 Check out the crash in solar energy on Thursday – nothing like a bit of rain to block out the sun. MidC’s wind was a no-show over the weekend but not true at SP – there the hub realized its highest combined renewals in several weeks, further explaining Citygate’s problems.

That caught our eye, the forecasted precip totals for Kalispell today – 1.5 inches of the wet stuff. That is a material amount of water this early in the season and will increase the October totals by 150% to 2.5″.  But, following that storm, the entire Northwest goes mostly dry.

Coulee discharge is at a calendar year low; mostly because BPA has elected to refill the reservoir. What little water is coming into the reservoir is staying in the reservoir, to be pulled at some future date, probably when BPA least needs the water.

The Peace is a massive energy producing baseloaded machine, either serving BC’s internal loads or supporting an aggressive export regime. Arrow discharge collapsed but flows at the US border are back to average.

Total energy on the Lower Columbia is off, week-on-week. Watch flows this week, let’s see what impact that Kalispell rain has on the system. 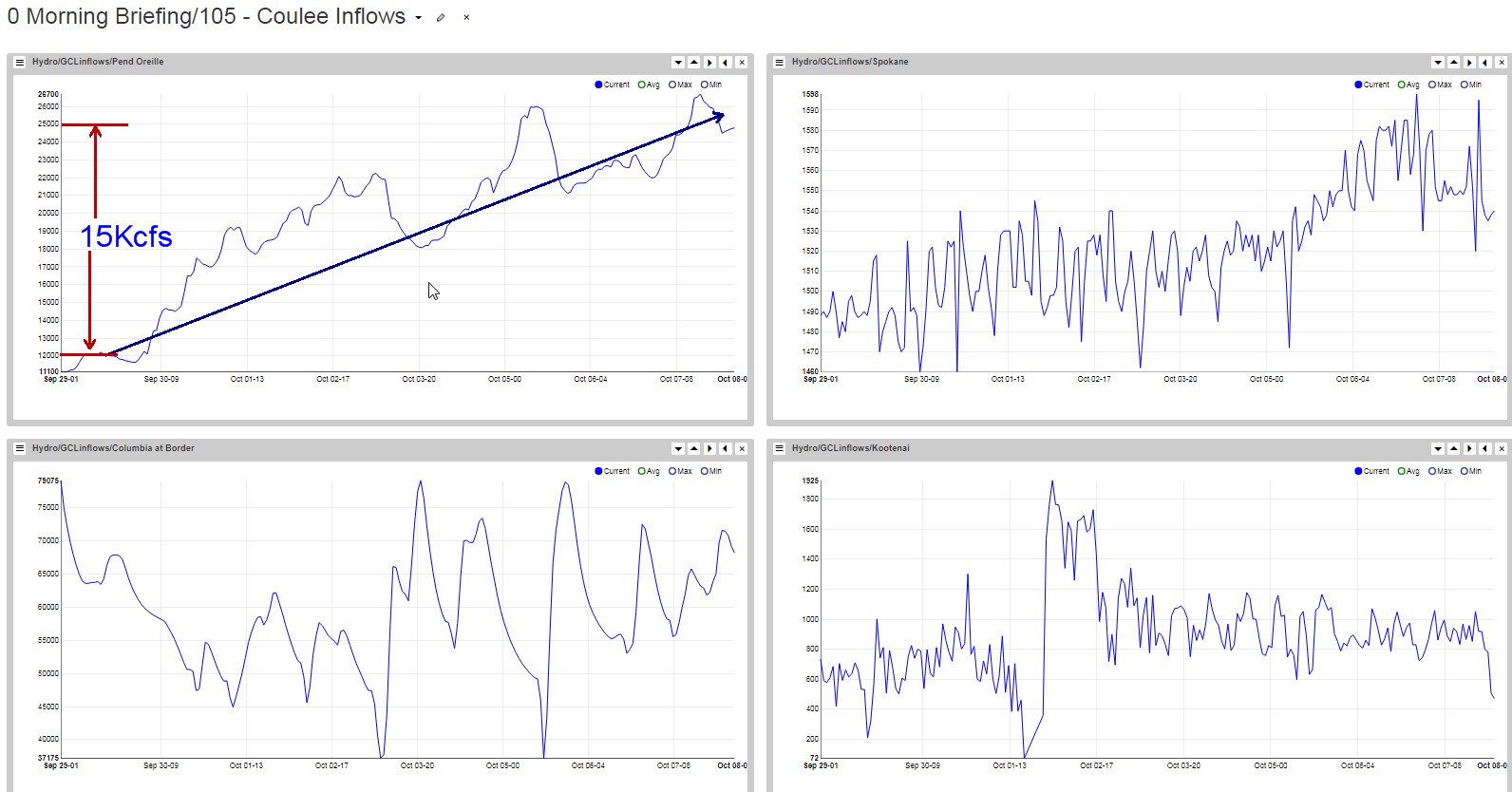 The Pend Oreille is up 15kcfs, not a trivial amount for early October. All of that is regulated off of a Lake Pend Oreille draft.

Albeni Falls regulates the lake, check out the dropping reservoir levels; but that’s normal, BPA always drafts the lake at this time of year.

Shifting our water eyes to the south, we see Shasta generating well-above normal, and the Pit posted some high numbers while New Melones production is off; seems the state is just playing a shell game with its reservoirs as it prays for an El Nino. 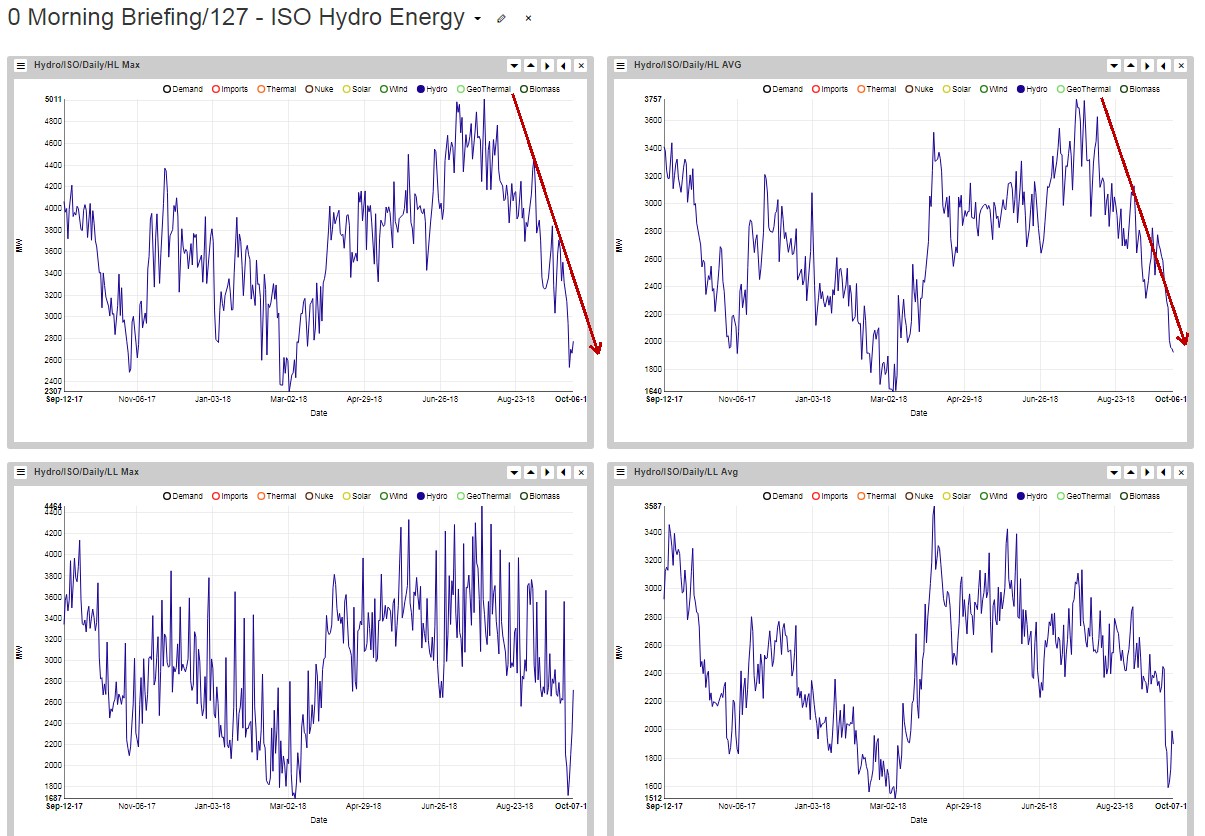 Meanwhile, total Cal ISO Hydro energy is off, tanking to be exact. I guess the ISO doesn’t need (want) the energy, better to save the water for growing federally subsidized cotton that no one wants. 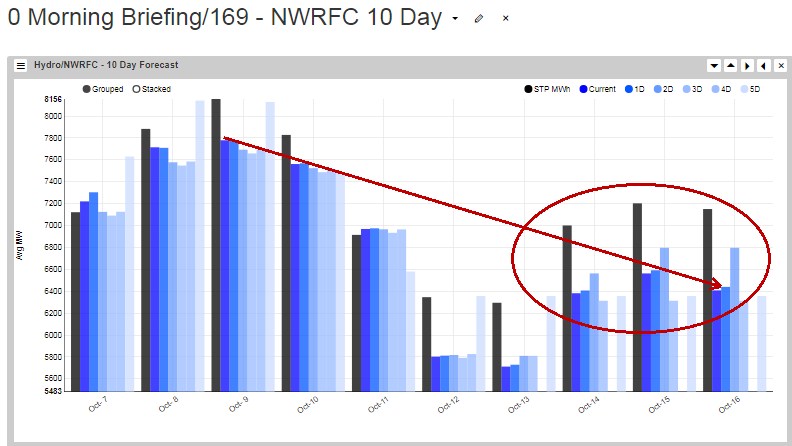 Hey! It’s Monday, that means today is STP day. The RFC’s 10 Day often provides some near-term Tells; the tell today is telling us to expect cuts in Oct. We need to look deeper for insight into the rest of the 120-day forecast. 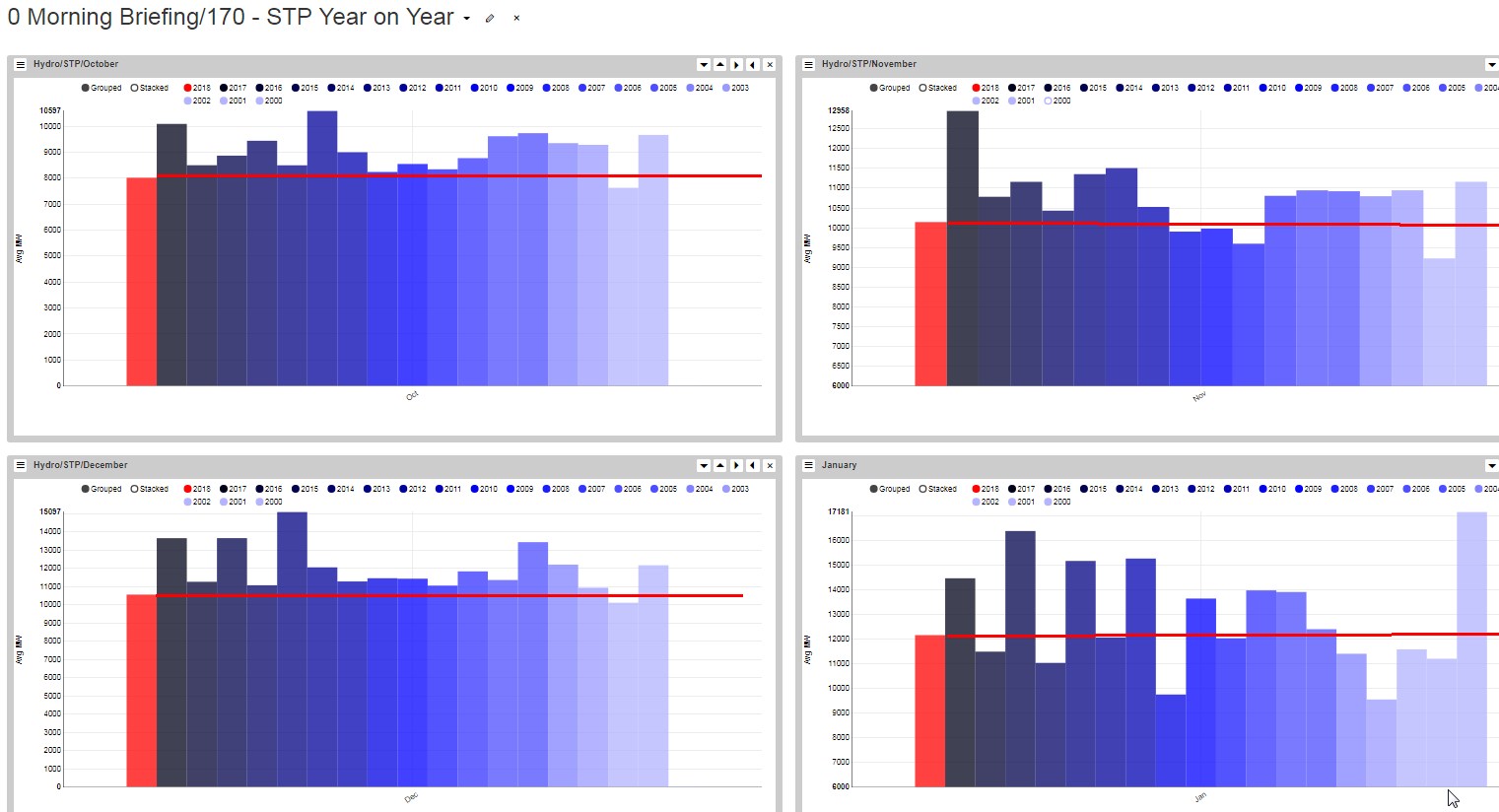 If they cut Oct much, it will become the lowest in 20 years. November used to be in that position, but after several weeks of successive bumps, it is now projected to be the fourth lowest. Only one year was lower in Dec while Jan seems just average. Our prediction will be cuts in bom,  nov sideways, bumps in dec that are paid for with cuts in Jan. 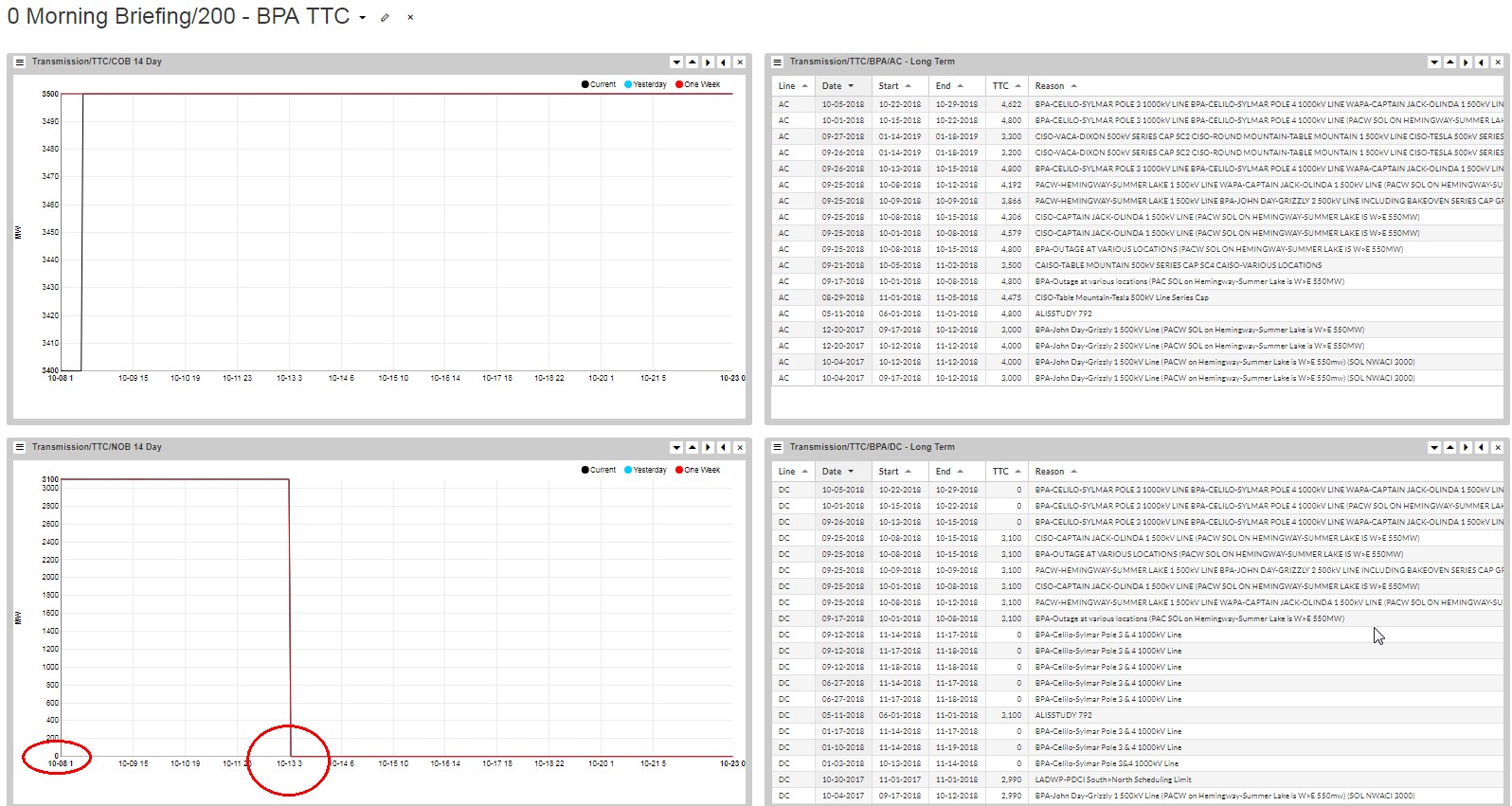 No changes in the Northwest’s TTC on the AC and DC; just be forewarned the DC is going to zero this weekend.

BC is selling more into the Northwest; the DC line is selling less (why would they give the ISO its energy at those prices?); same is true on the AC, though some of that can be explained by cuts in TTC; Palo sold more just because it didn’t have the load to absorb its own generation. All energy is flowing net north on the ISO’s “Paths.”

Loads are going up; supply is going down. We’d be modest buyers, and our books would be long.