The most striking report I discovered today was the big move taking place in BOM MidC HL: 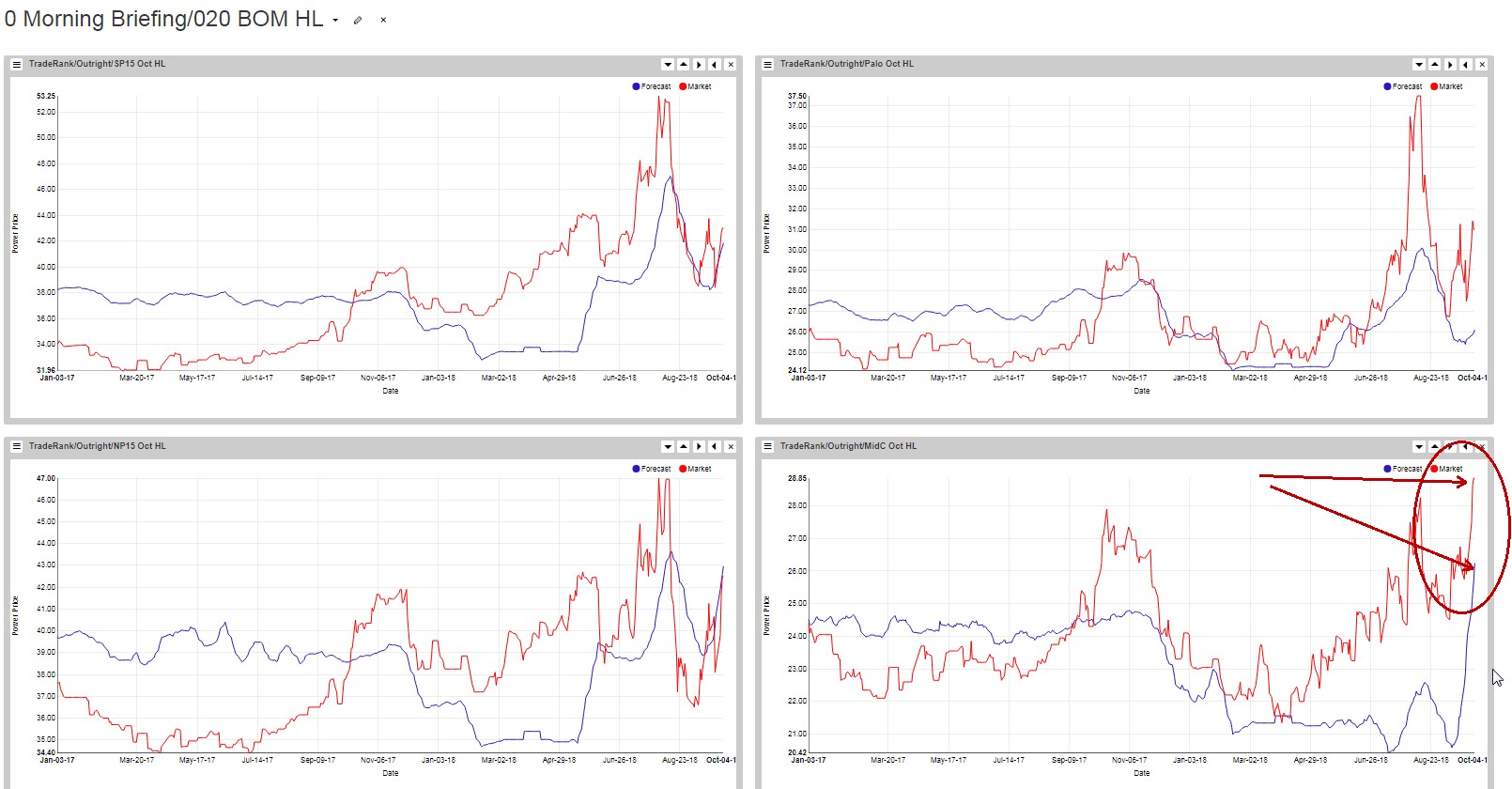 The market went bid, and no offers appeared, though we are not so convinced things are as tight as that chart would suggest. In a week, the region loses 2000 MWs of export capacity and gains in flows on its rivers from expected rain, though you’d think not a drop was coming based upon NOAA’s 8-14 day: 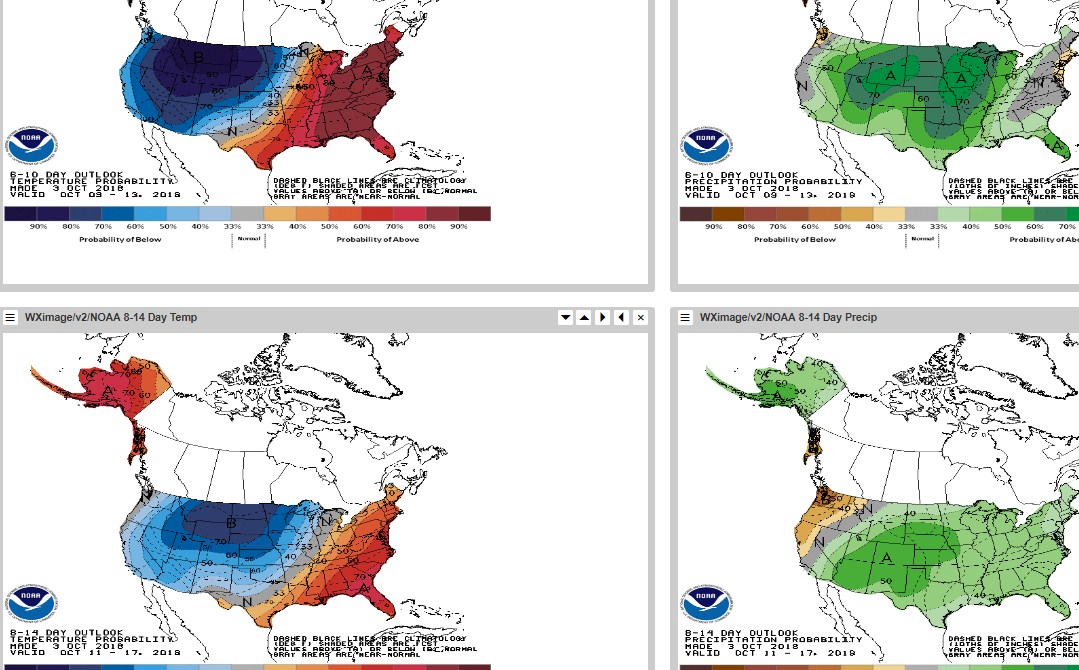 At least not much on the coastal ranges, but those don’t matter as much as the west-side Rockies, and in the 6-10 day they get drenched, same shows up in the NWS forecasts:

We’re most interested in the top three, the bottom three are more westside and will feed much smaller projects. These are not biblical amounts but they are bearish, yet the BOM is off to the races. Perhaps it is that cold weather, but this is October and those cold anomalies mean about 55 in Seattle, not 35. 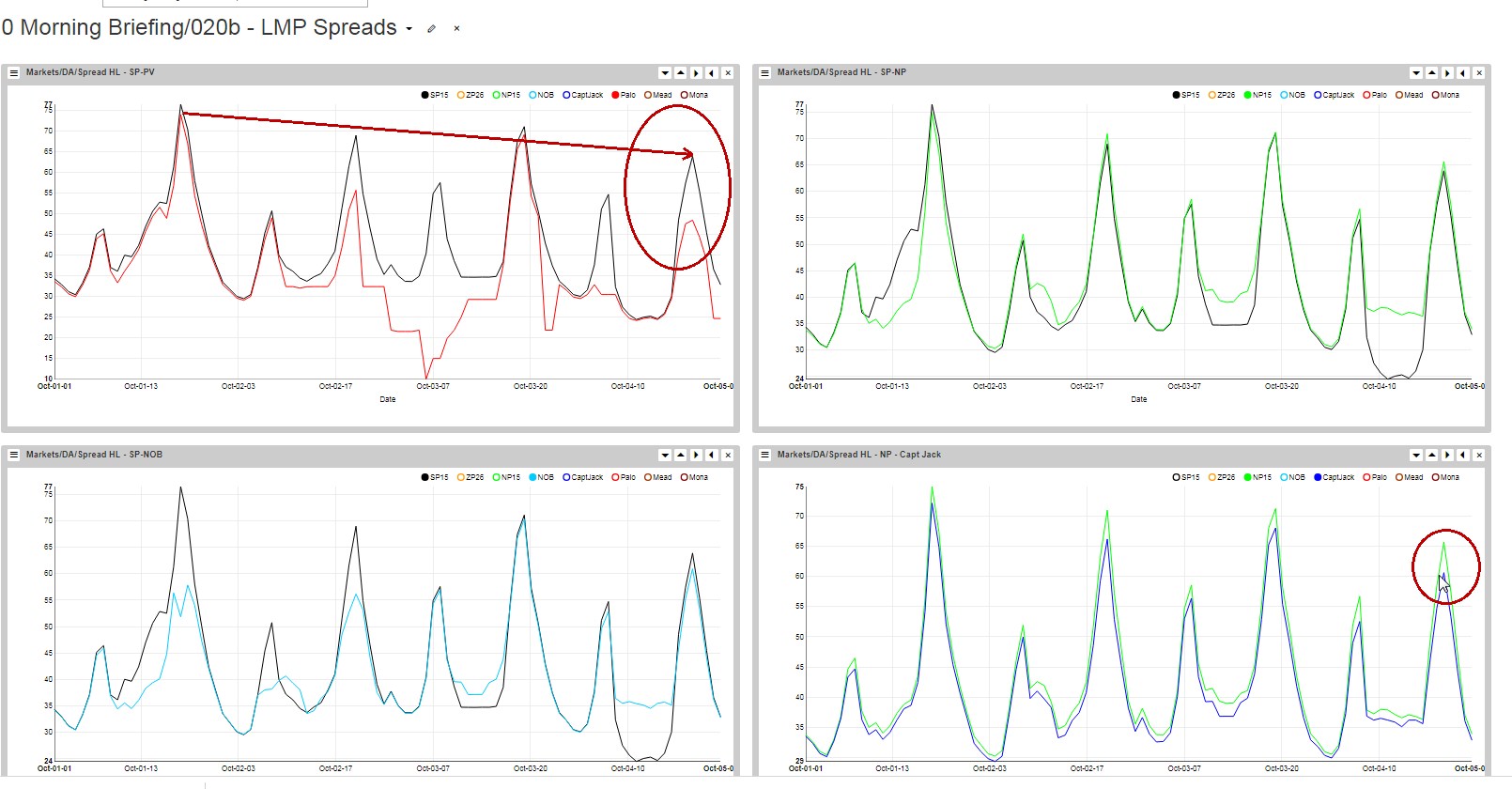 SP15 is off from last week’s levels and the SP-Palo spread is blowing out, possibly from the remnants of hurricane Rosa which crushed temperature and brought rain. 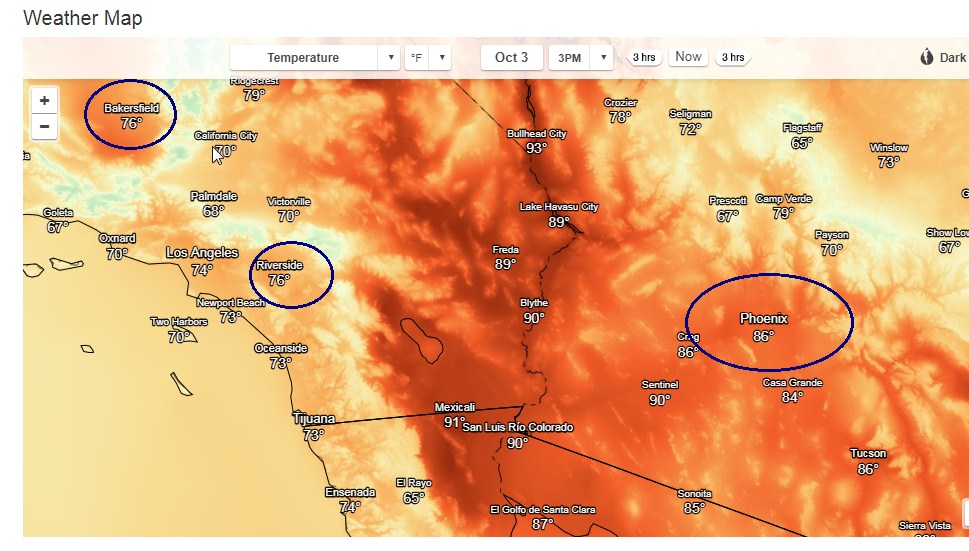 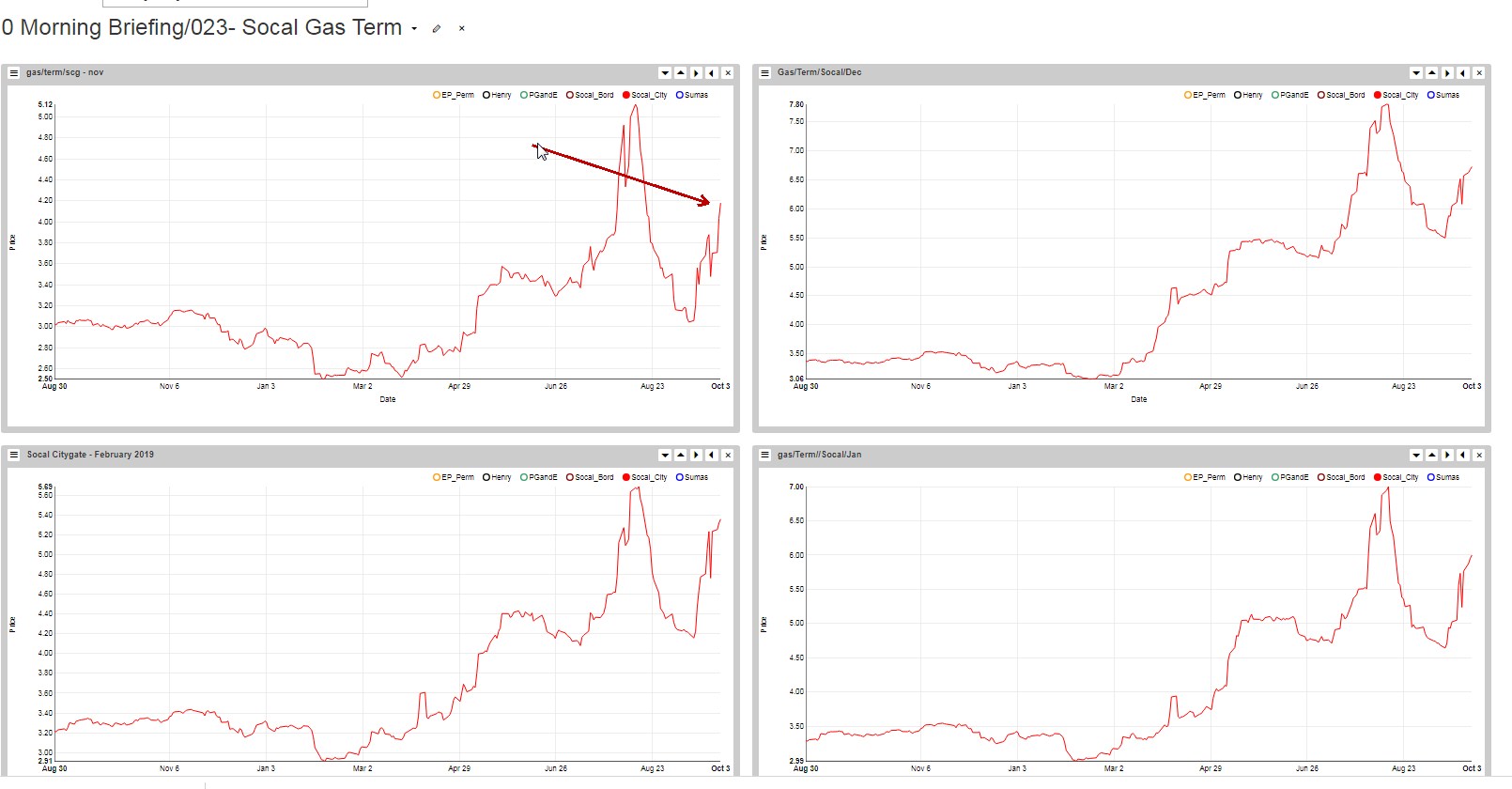 Cash might be falling, but term Socal Citygate is rallying, having recovered about 50% of the selloff. 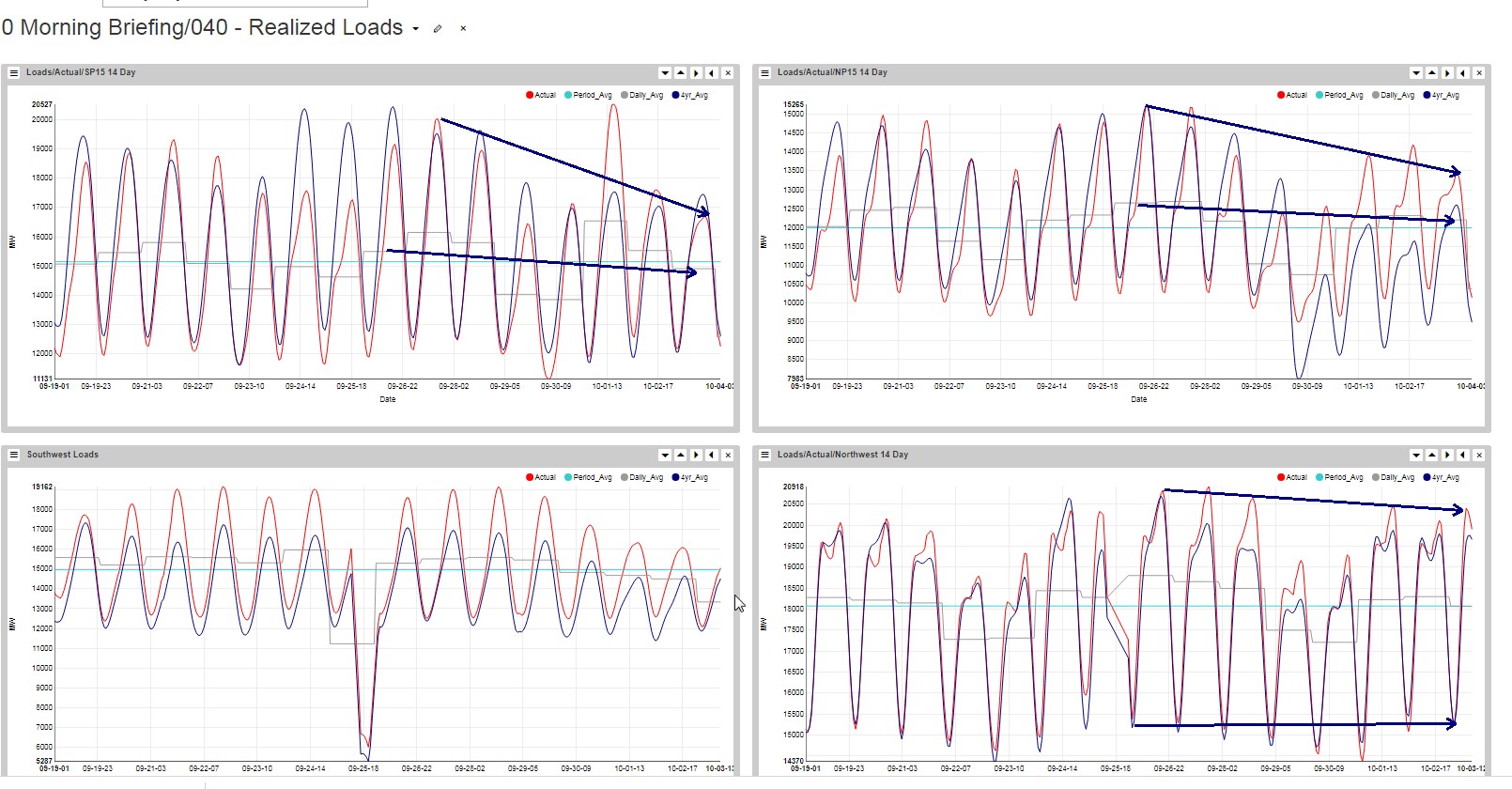 Yes, loads are off everywhere, including the MidC, though we are starting to see night-time Northwest loads rally as the hub swings to heating load. 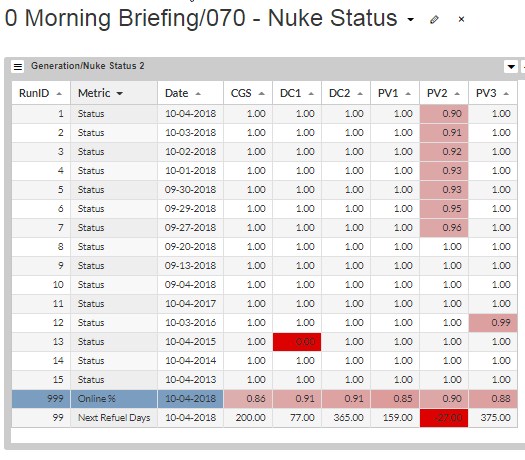 PV2 just isn’t quite ready to shut down for its refueling, but that is coming, most likely over the weekend. We believe a Diablo unit (#1) is next in the refuel queue. 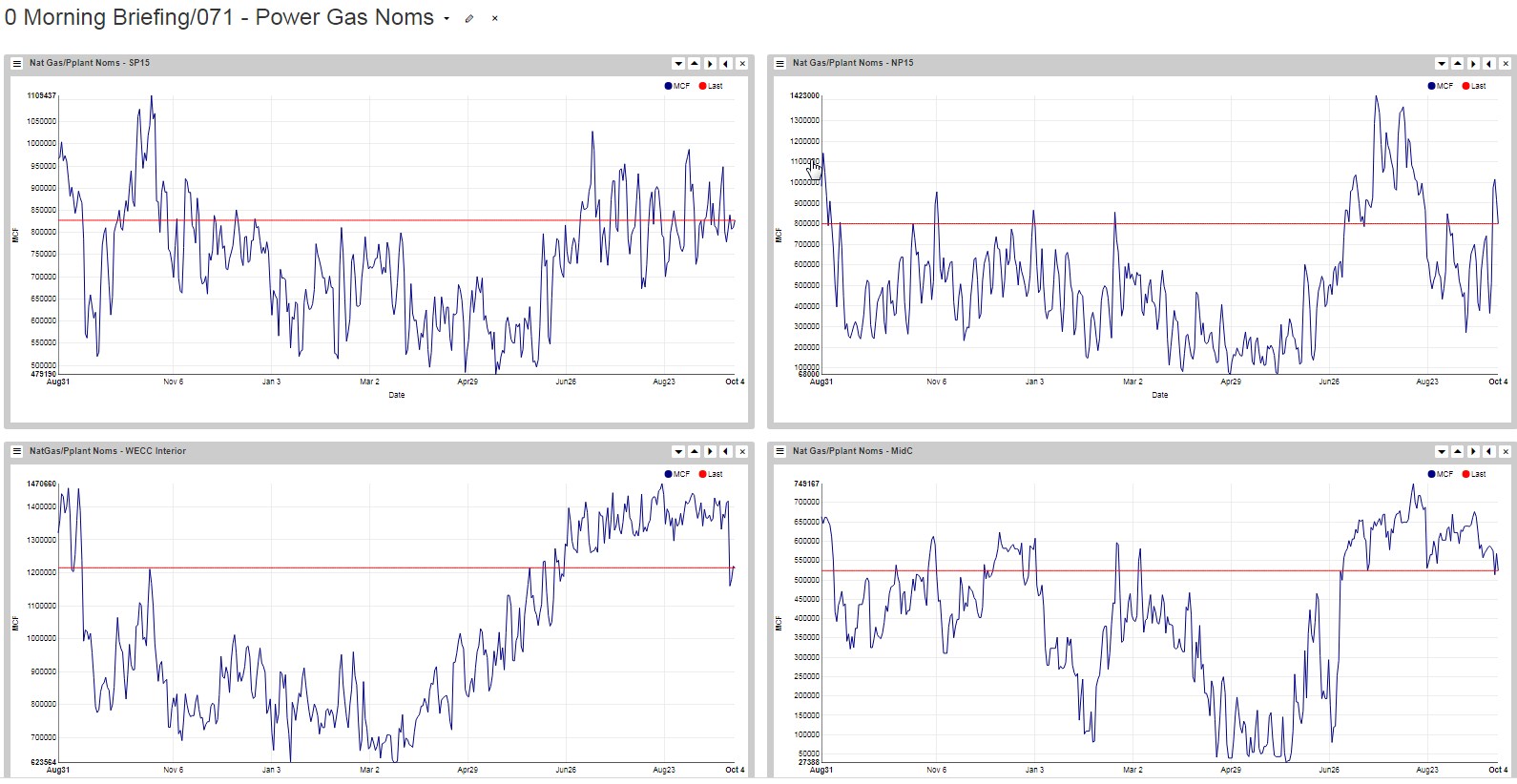 As temperature’s plummet in the Sunshine state its gas noms follow and are heading towards the winter lows. NP’s have rallied of late even though a few of its gas units are offline. SP has more outages than NP. 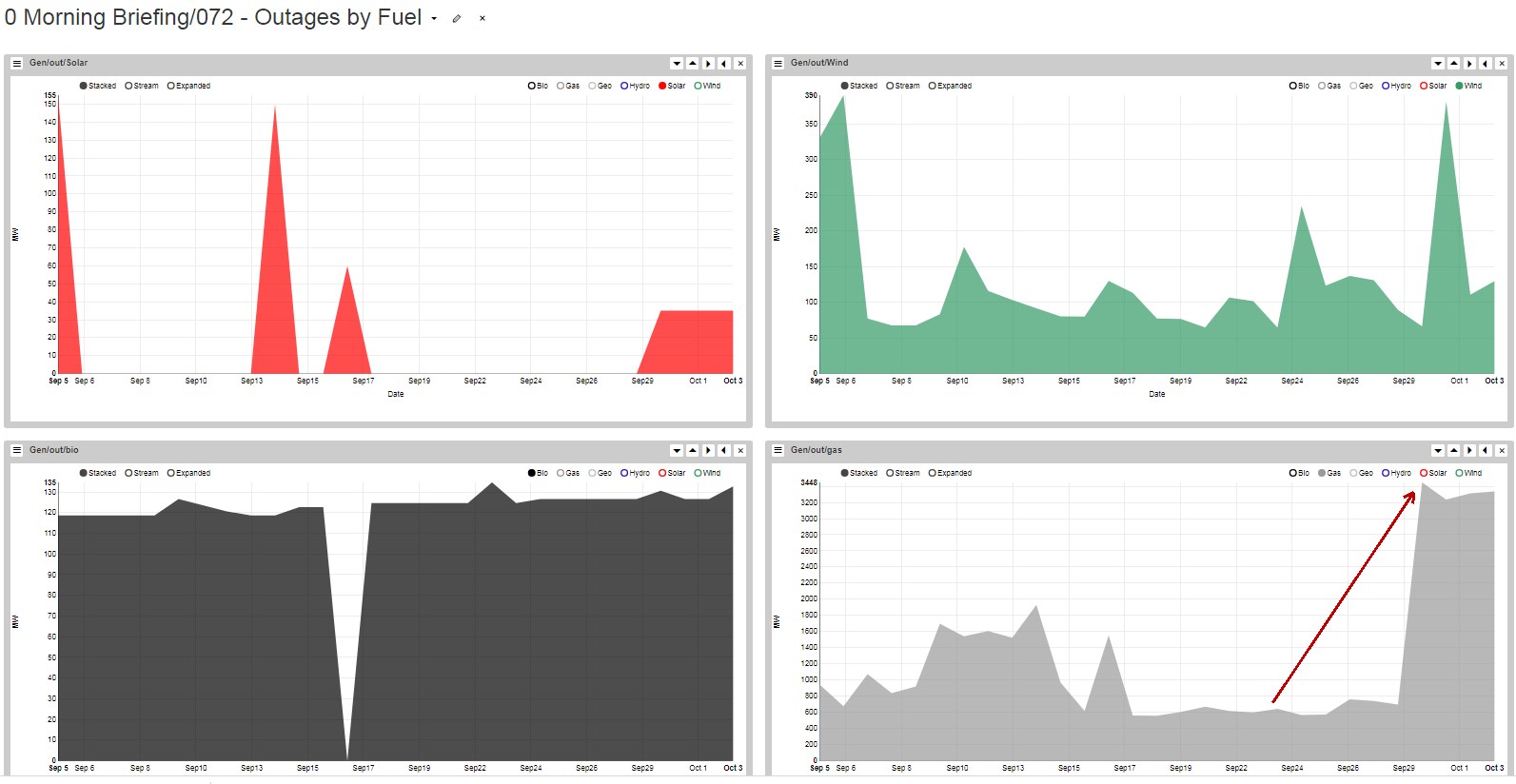 About half of those units are in planned maintenance; more will follow as we move through the month. 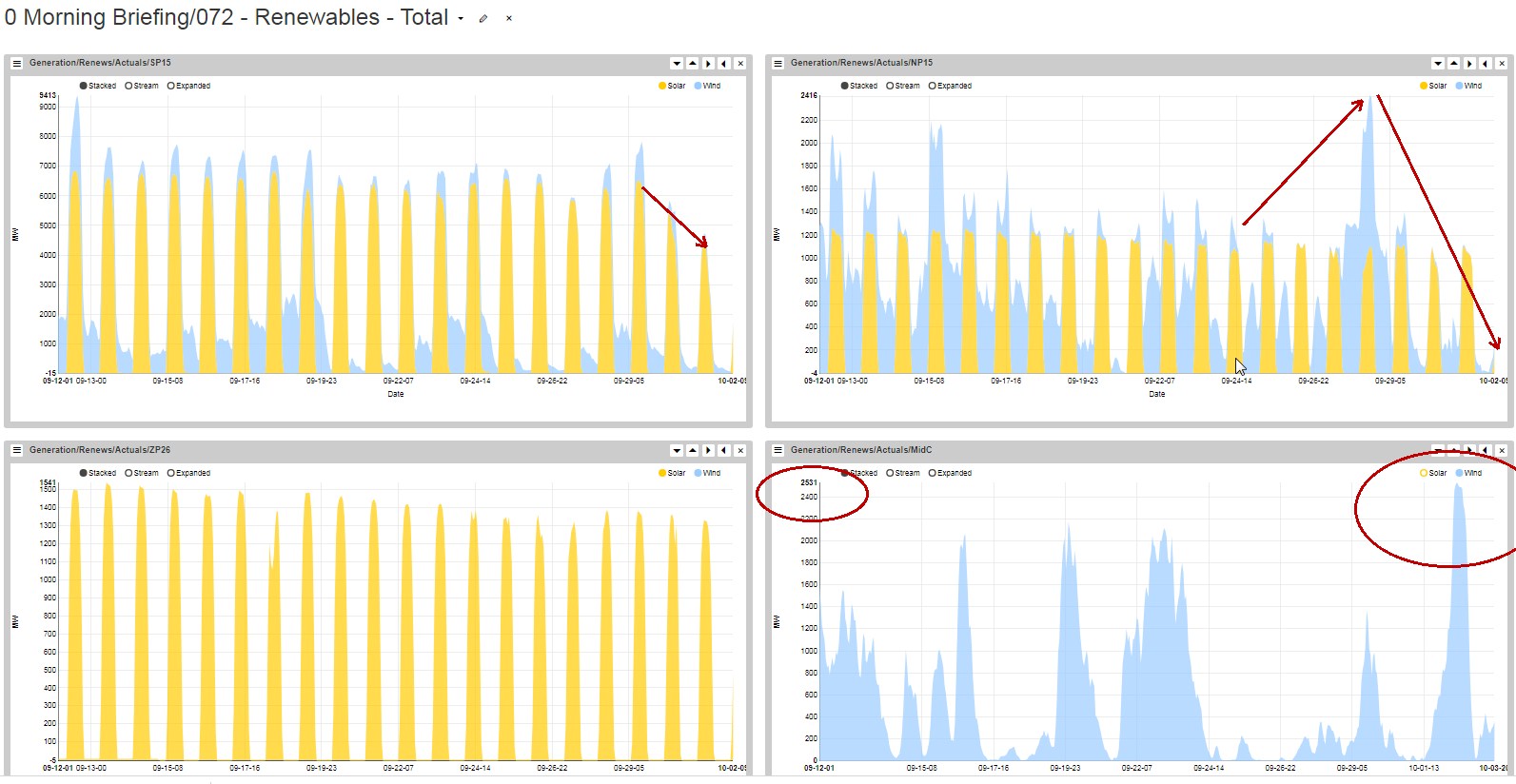 SP’s solar took a two gig haircut yesterday and NP saw its greatest wind production in months on Tuesday. Same with the MidC, that region cranked out nearly three gigs for a few hours. 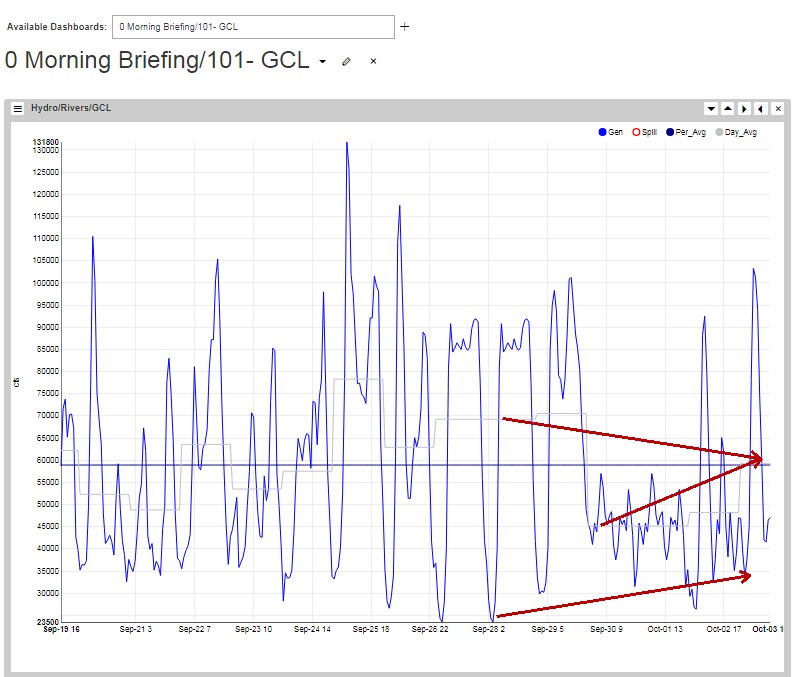 Coulee discharge continues tight, though yesterday was up from Monday and the lows aren’t as low.

The mighty Peace projects cranked up, most likely to serve exports to the Northwest and BC’s own loads. While the Peace rallied, flows out of Arrow tanked as did the Columbia River flows at the US border.

Further downstream, on the Lower Columbia, production dropped from last week which may explain some of the BOM rally.

So might BC’s reservoirs, which are now about 2 MAF behind the ten-year average. Don’t hit the panic button, but that is two a MAF hole that must be filled in. In a very dry year, it would be problematic.

Discharge at Shasta is now well above average and the Pit is back to shaping its water and is also above normal. That doesn’t say much, normal California flows in October are the equivalent of a couple of cows taking a leak in the Sierras. 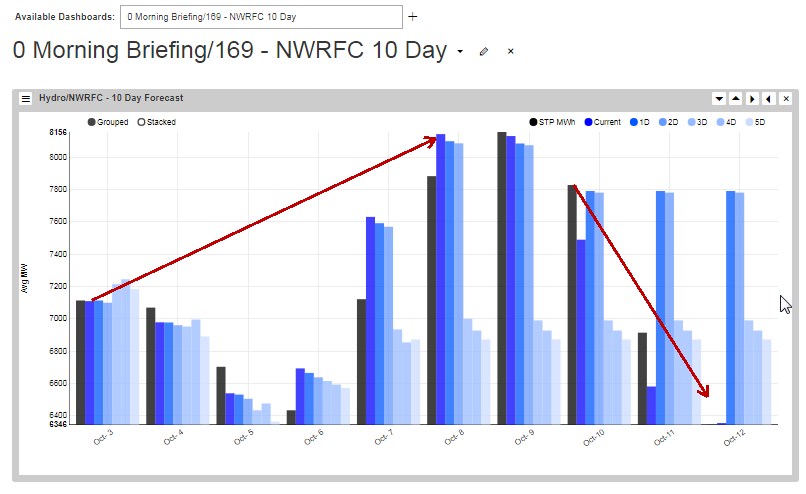 The River Forecast Center is projecting higher energy production next week, then takes it all away the following week. 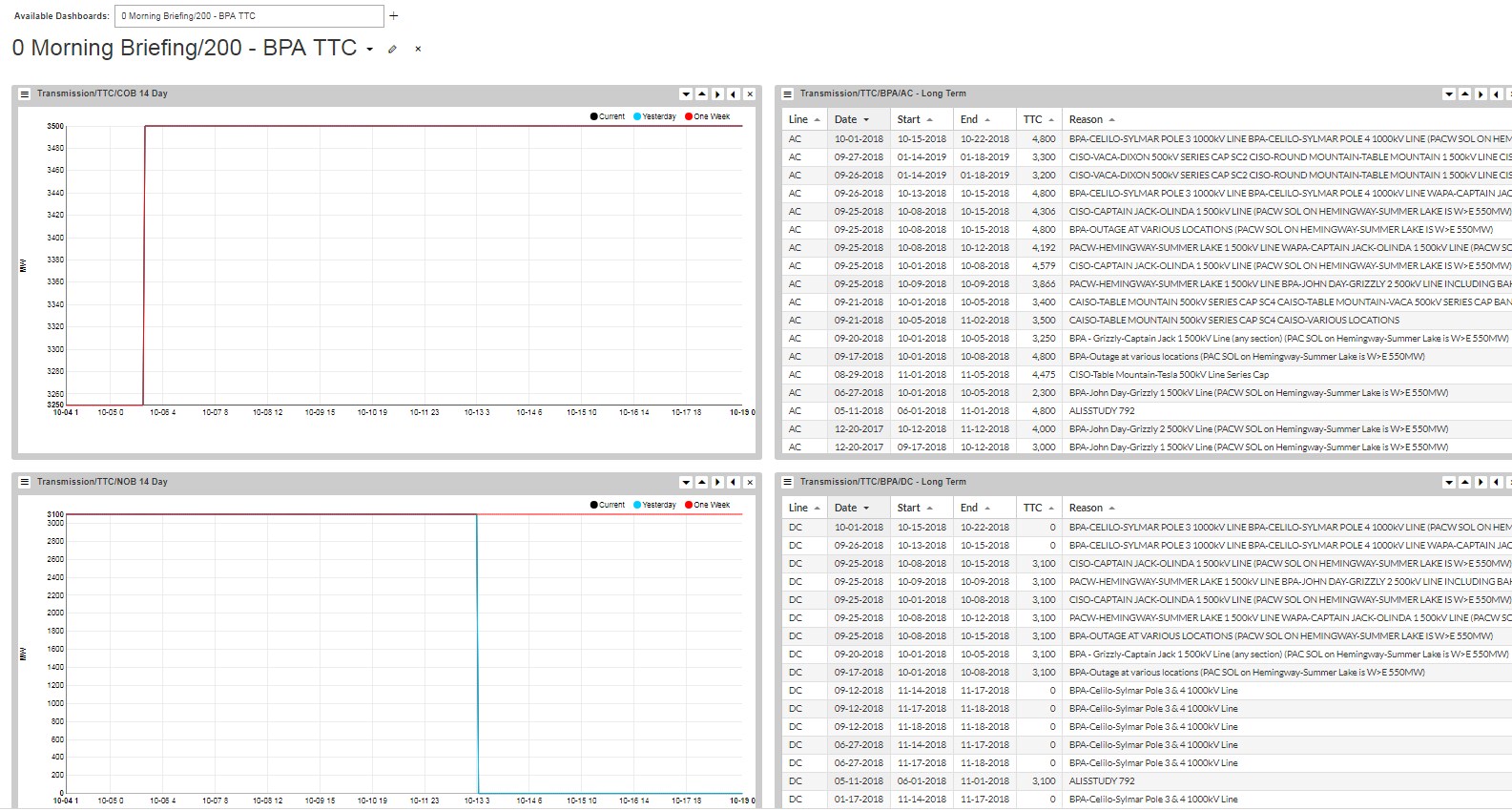 No changes in BPA’s TTC outlook; the DC is going to zero in a week.

The Northern Intertie is exporting; the AC went to zero for an hour yesterday (where did that come from?); Path 26 restored its TTC (but it never mattered), and even the Palo line saw a derate yesterday. But that didn’t matter either, flows exceeded TTC for most of the “outage.”

I don’t get the BOM MidC Rally but can’t deny the Northwest is water-tight. NOAA’s 8-14 day bodes poorly for SP and Palo length, that forecast takes us out to Oct 18. Still, time for a Santa Ana but those hopes are quickly fading.