Every morning, when it’s my turn to blog (Monday and Thursdays, usually), I sometimes fear there may not be anything to report. That is never the case; there is always something changing in the wonderful world of power. Many of the changes are subtle, a creeping transition to a new world; others are rabidly rapid, like Socal’s pipeline explosion last year. Yeah, that was one year ago on this coming Monday. 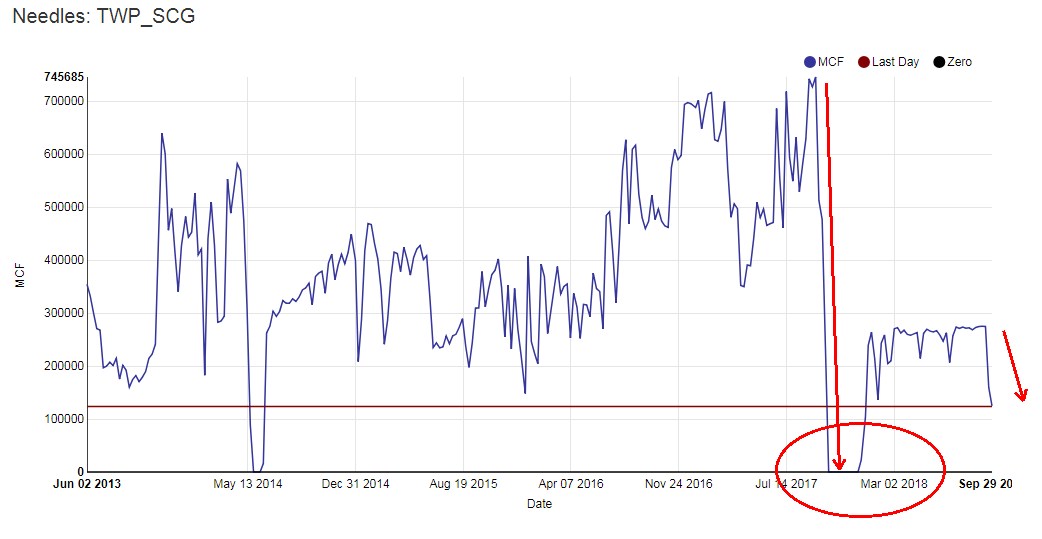 How much havoc did that explosion wreak? All of those heat rates greater than 20k are explained by what happened a year ago. I’m not talking about SP15 heat rates, but MidC and Palo and NP15’s (and Utah and Nevada and Colorado).  Or you could blame Aliso, but the nail in the coffin was the loss of that 500k import capacity. Some of that has been returned yet the system remains crippled.

Speaking of amputees, it looks like Socal’s injection days are about over:

Both Aliso and Honcho are full leaving just Playa and Goleta with storage capacity, but those too must be nearly functionally full. 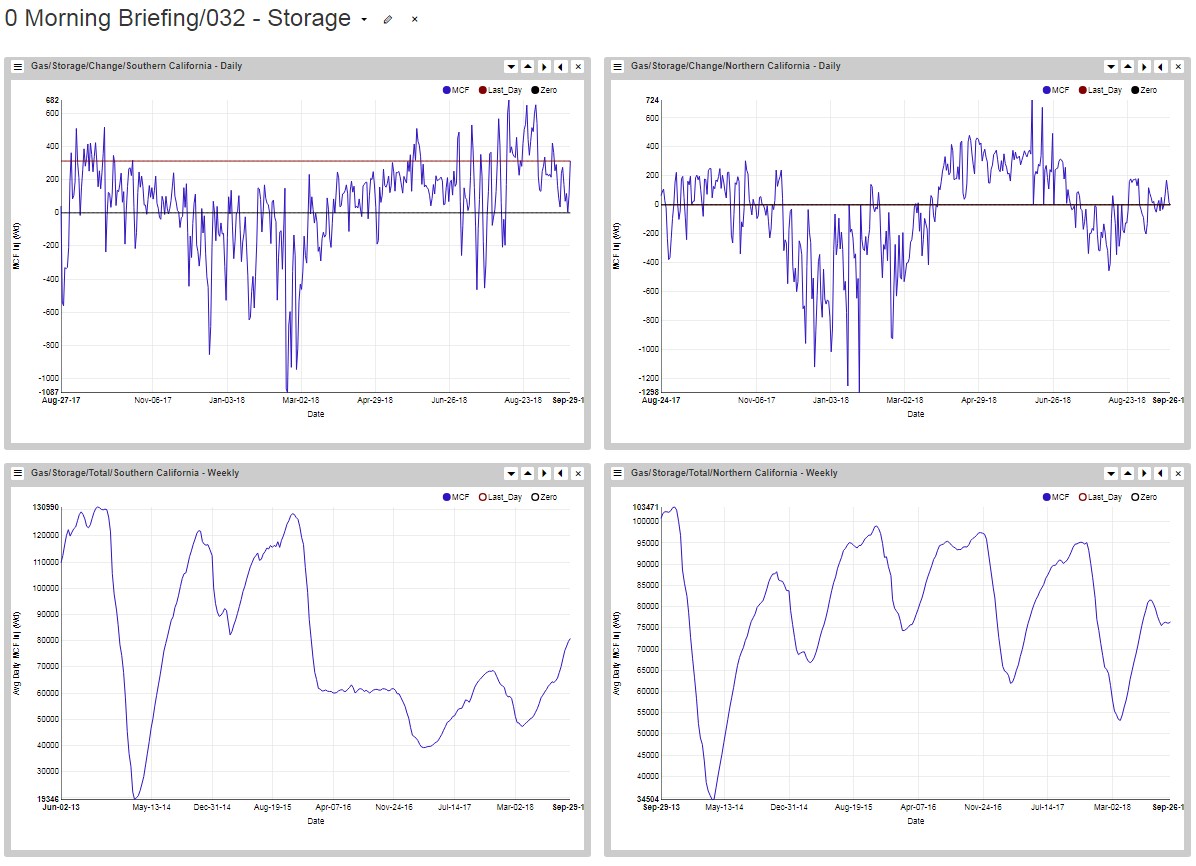 Socal now has more gas in the ground than PG&E, yet the threat of a shortage lingers in the term pricing: 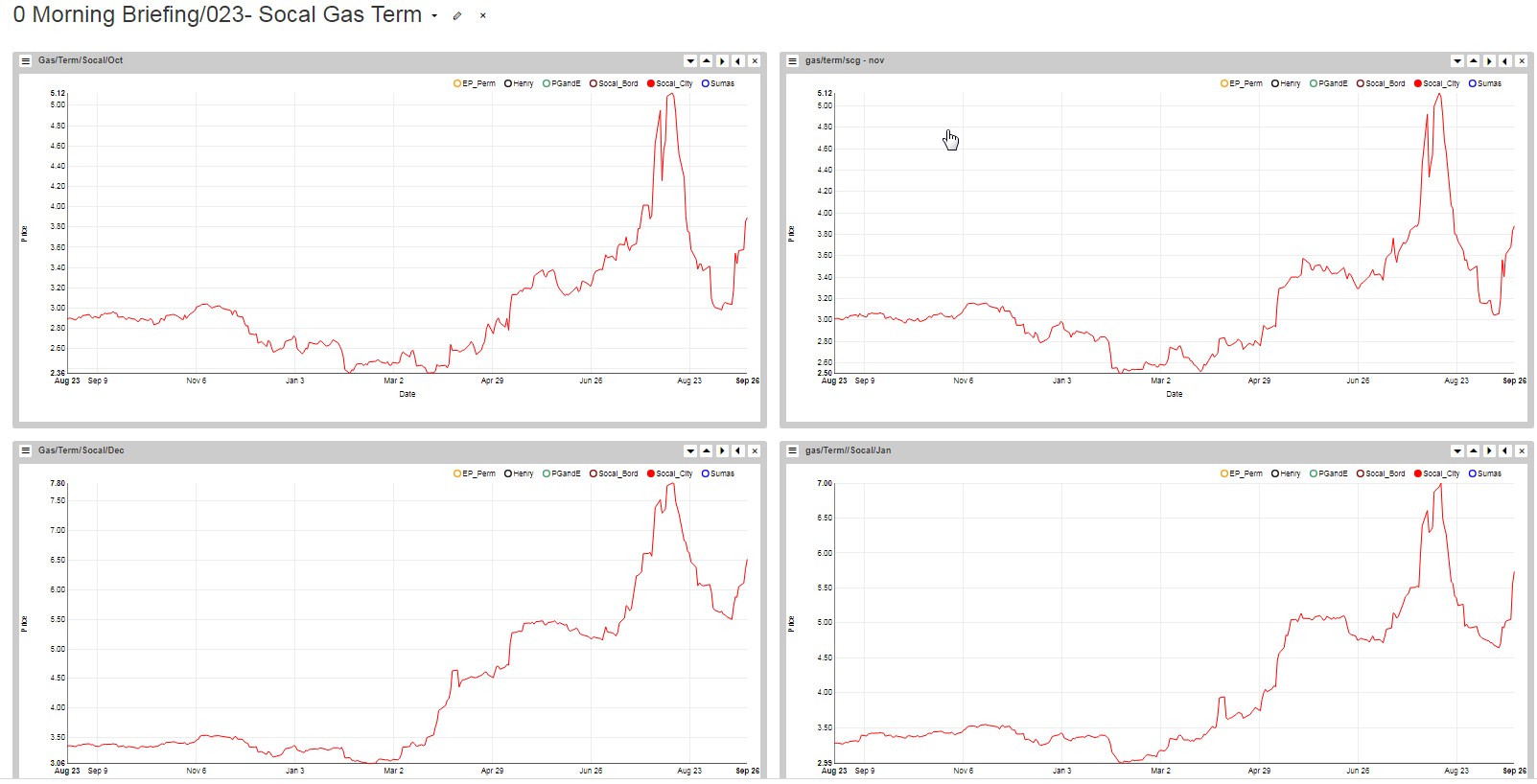 All bullets are rallying off of the bottoms achieved during the August meltdowns. Speaking of meltdowns, check out BOM’s collapse. 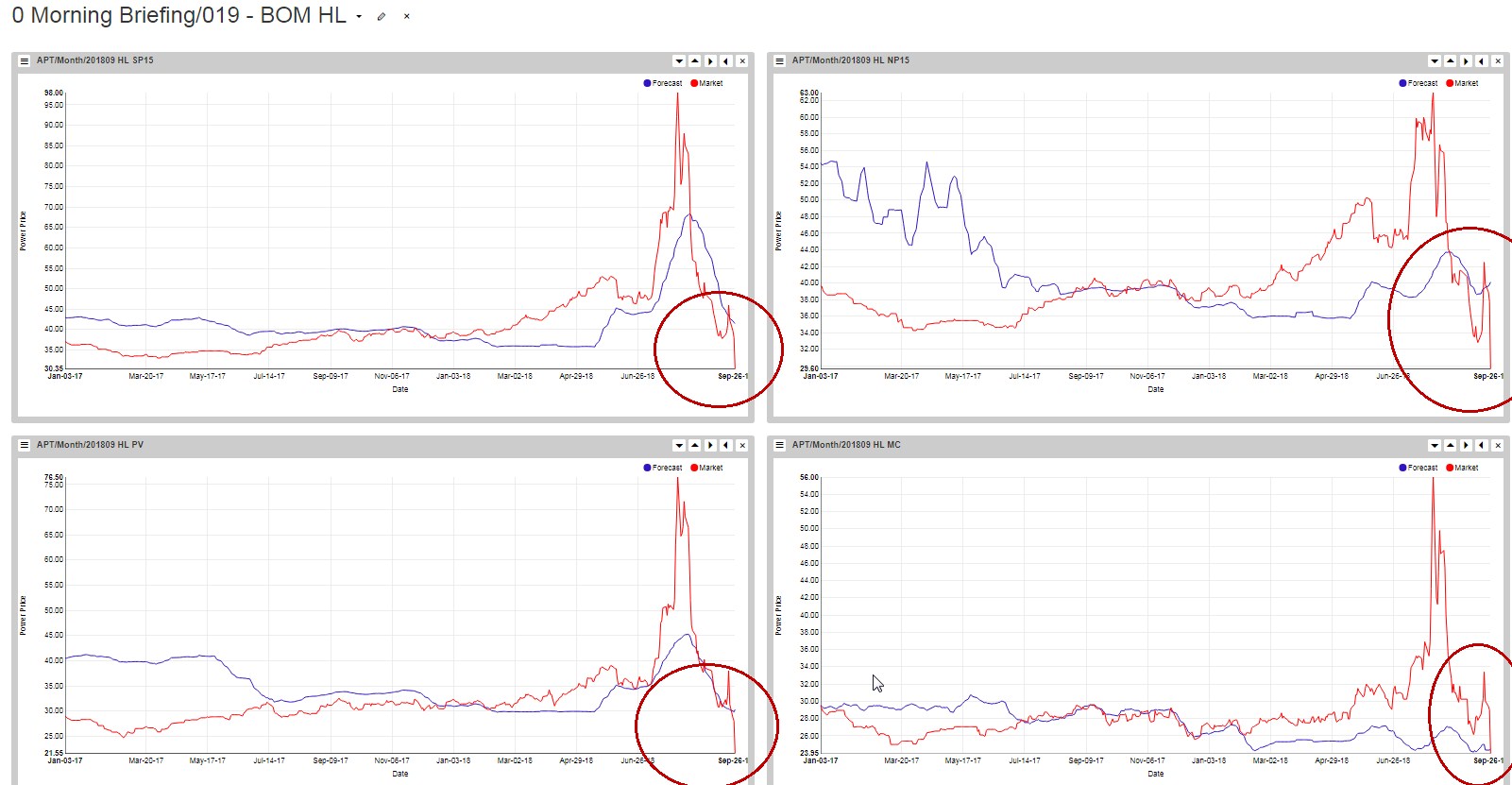 Not entirely fair, given that most of the BOM was the Friday-Saturday package, but still, the move is remarkable given the lofty heights September once traded. Ouch, who bought those? Am guessing it was Genscape or GPS clients. 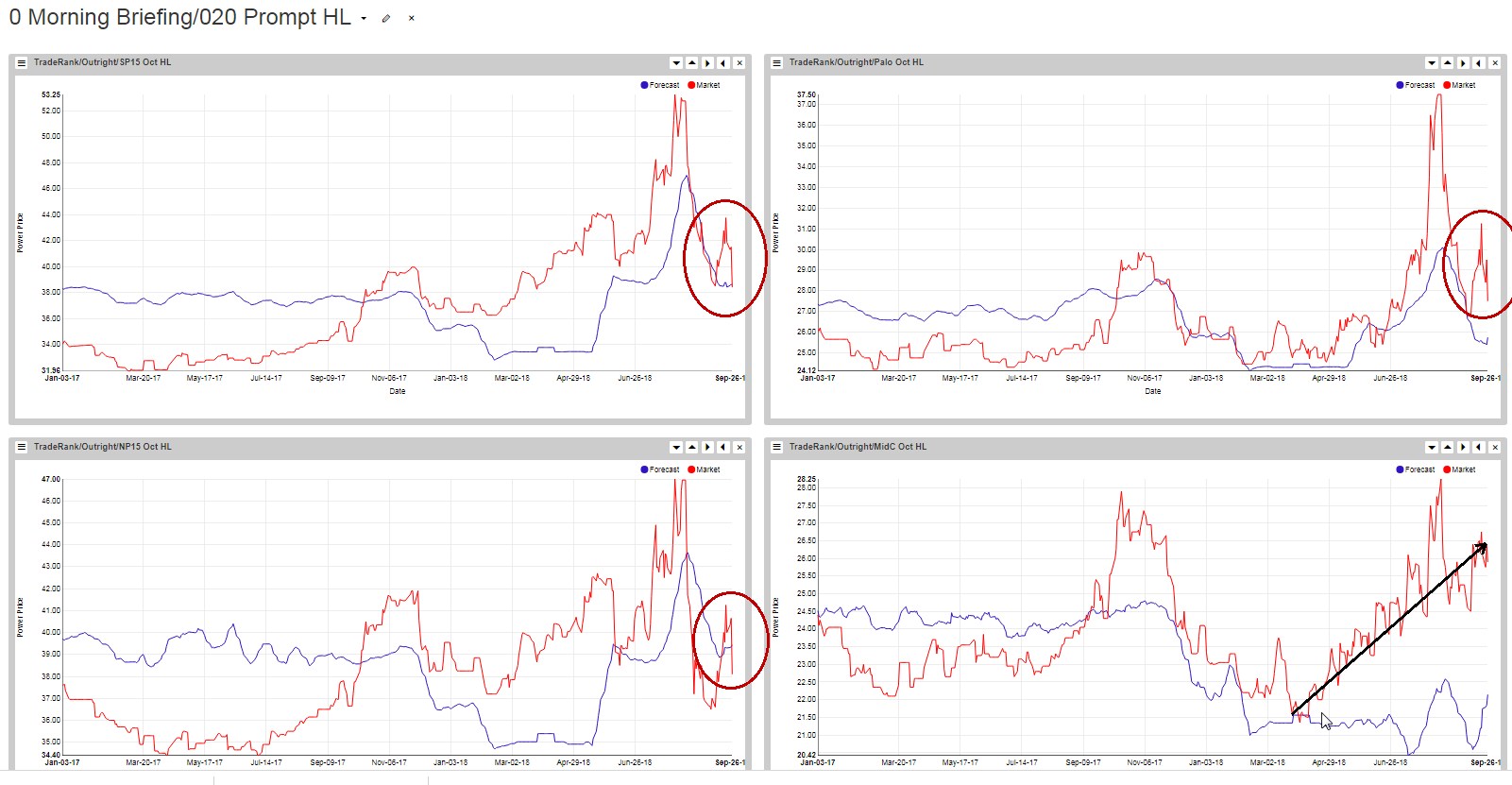 Even Prompt, soon to be BOM, has burped, though less so at the Mighty MidC where long has not been wrong, but it soon may become sinful, but only if it rains hard and long. There are hints of change in the air … 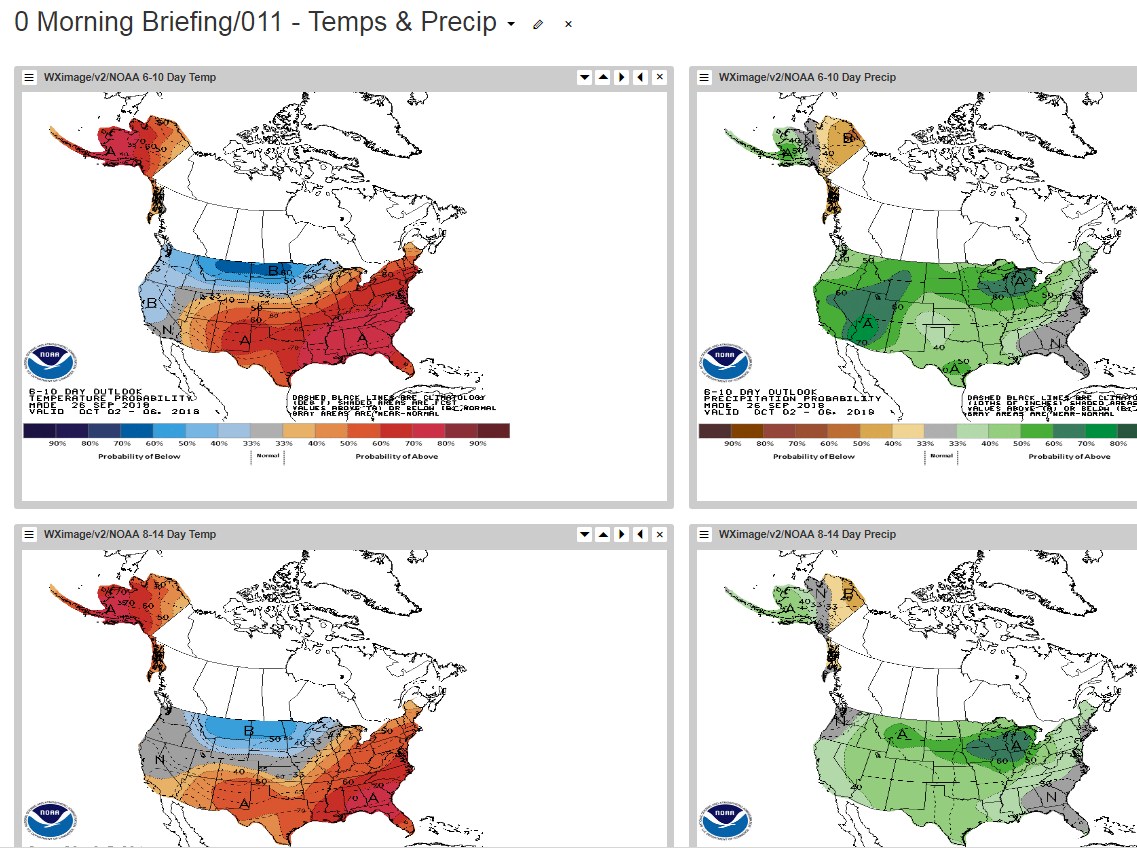 The Northwest is either normal or cool and wet or normal; California is mostly normal both temp and precip-wise. Some of that AZ/NV heat has shifted east. Winter is coming and the Socal Citygate Nightwalkers are astirring. Hah, we’ll need some frigid weather in LA before those monsters get over the wall. 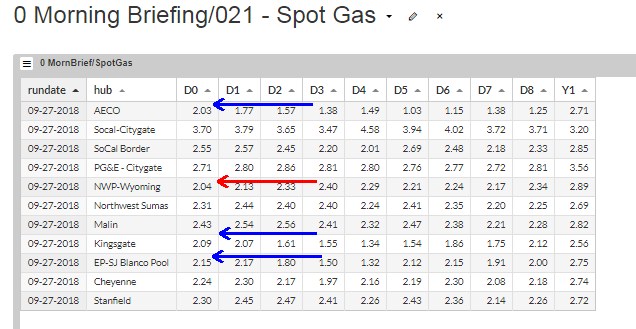 Northwest gas is firming, especially north of the border; both AECO and Kingsgate saw prices soar 30-40% in a week. California gas not so much, but San Juan is rallying. 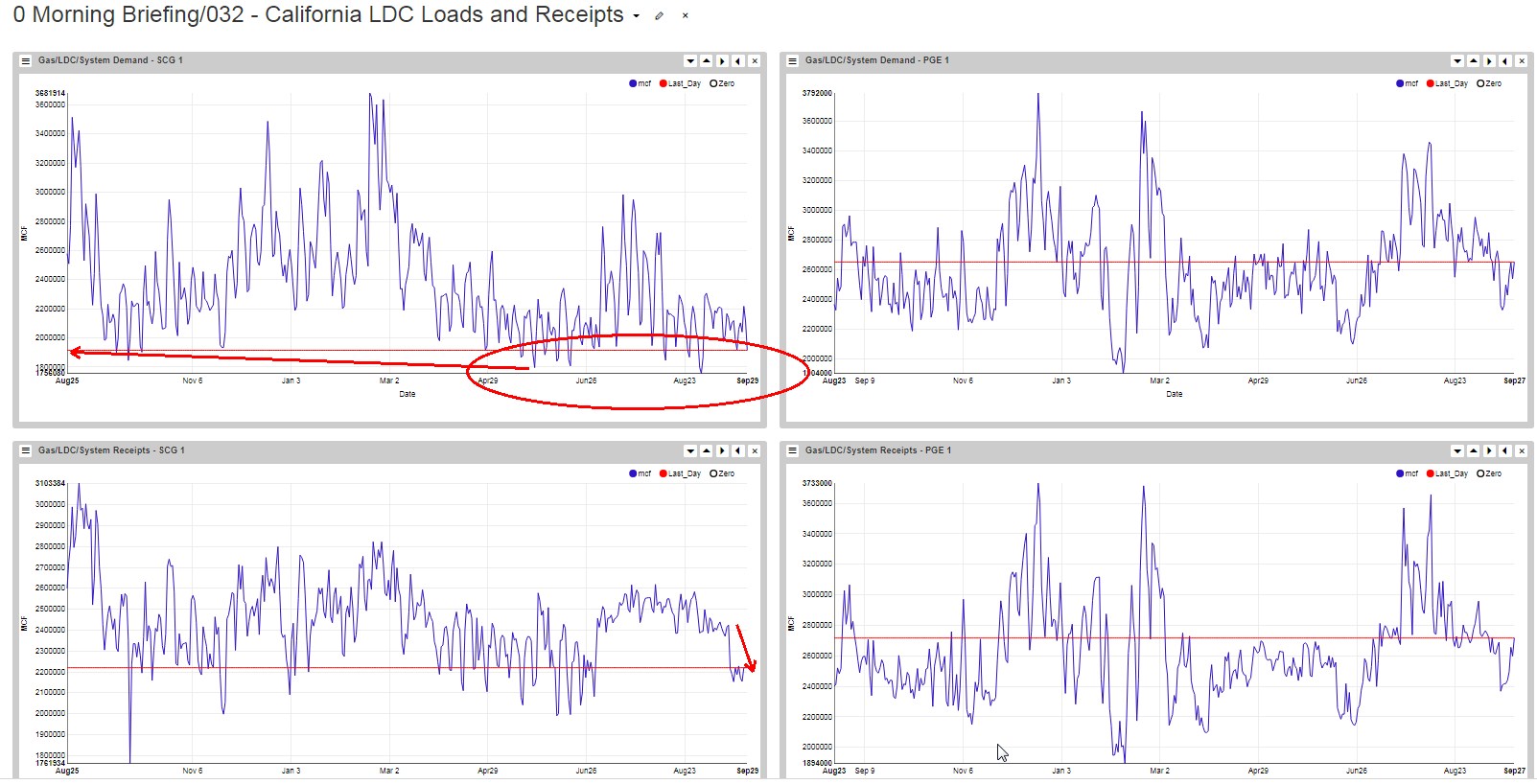 What’s not rallying are California gas loads; these are mired in fiscal year lows at socal; nocal not so much, just about normal there. 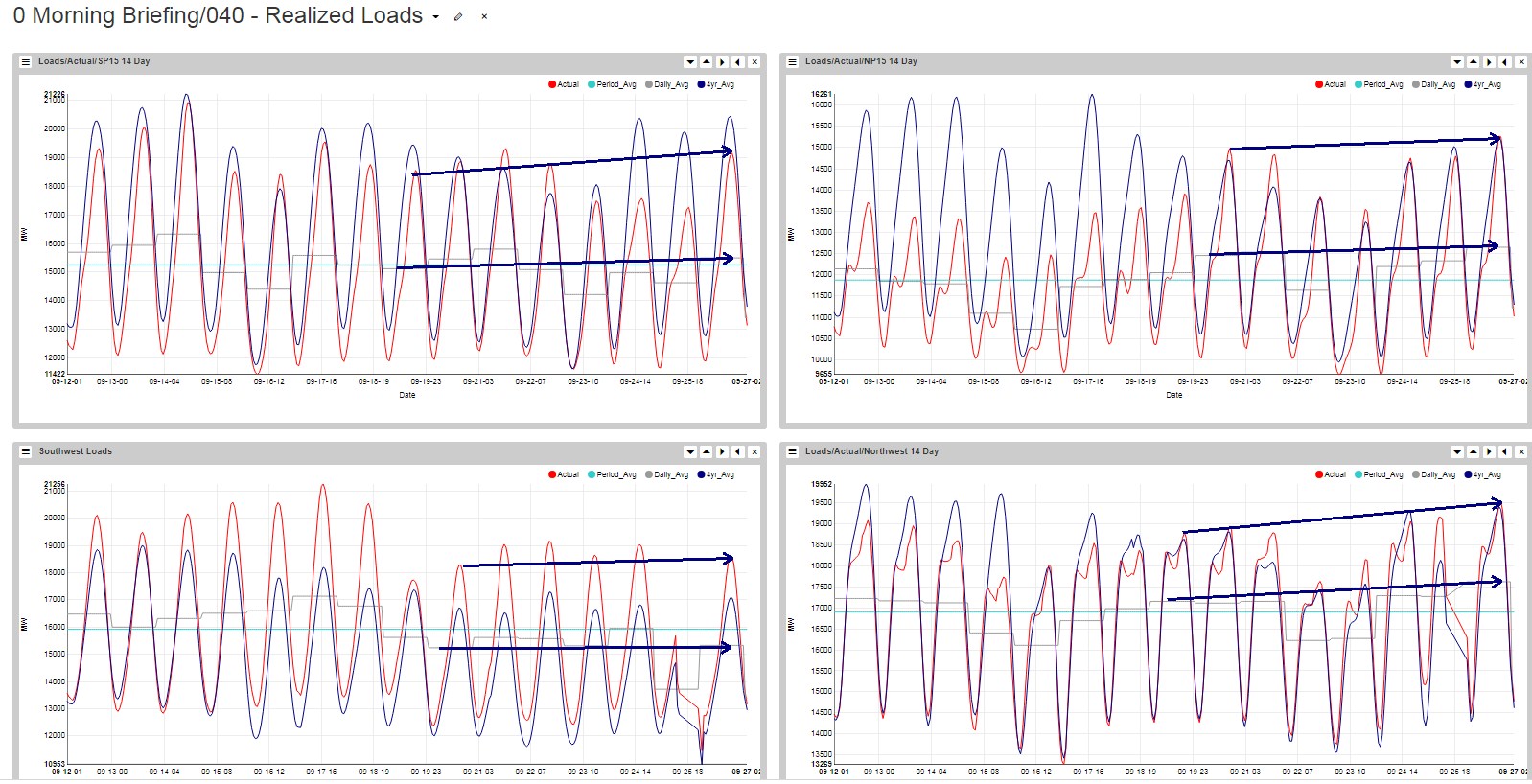 Power loads are up across the WECC; not because the weather is all that bullish, but incrementally more bullish than last week. 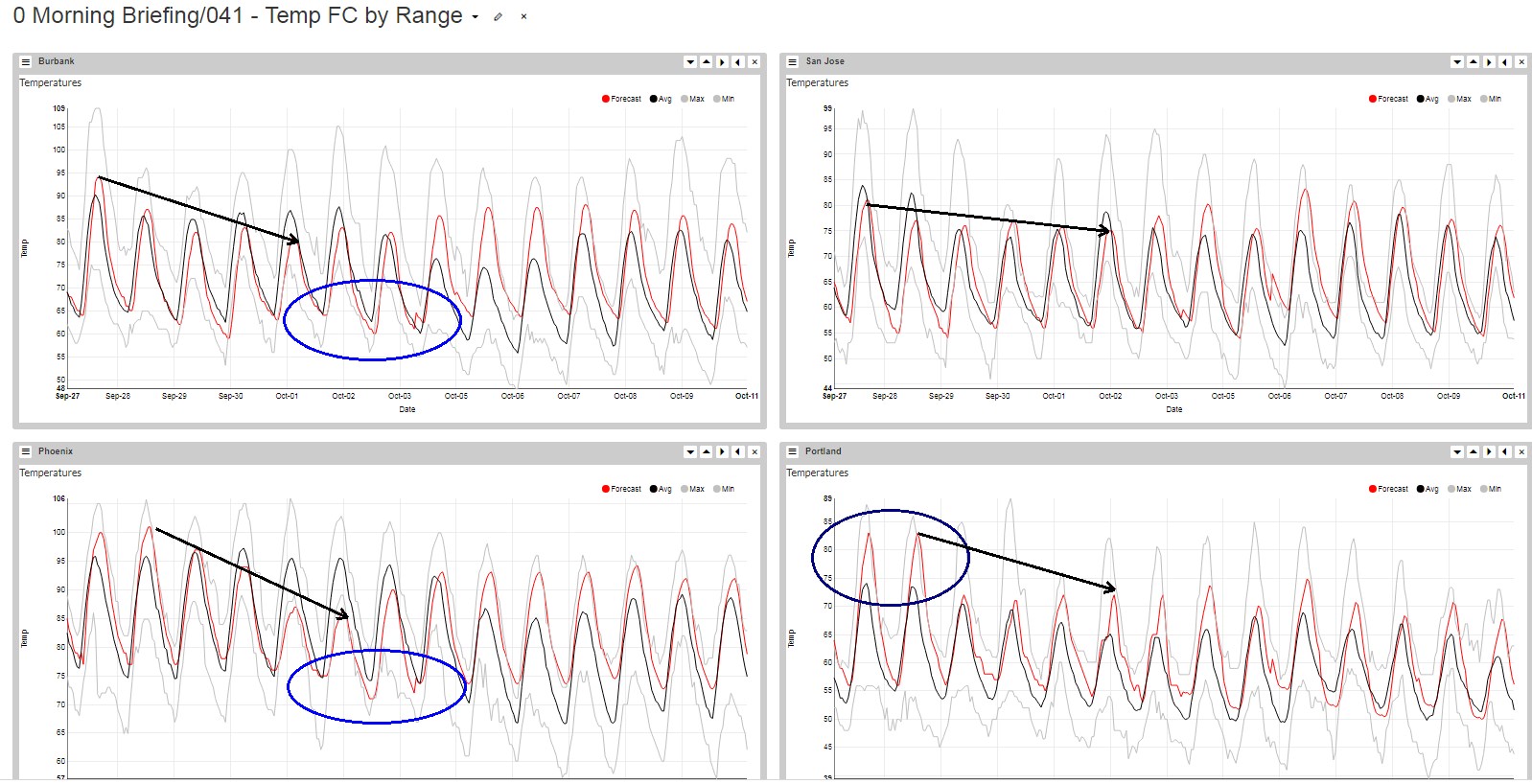 What goes up must come down per someone’s theory, and temperatures are falling across the WECC, even approaching ten-year lows at Burbank and Phoenix in the morning hours. This is just bearish; these don’t drive heating degree days, they just wipe out the cooling degree days. 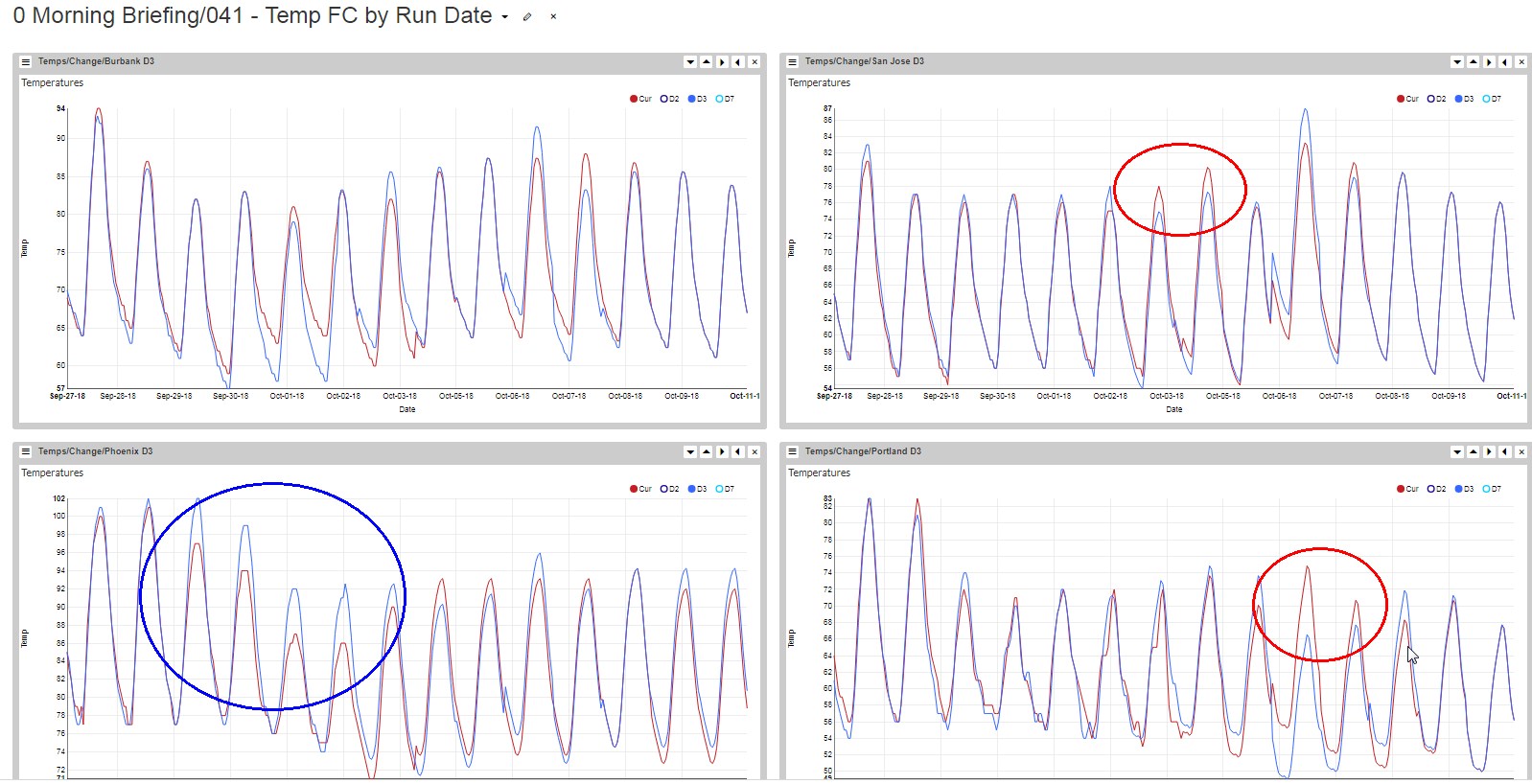 And the change in the temperature forecasts are either neutral or bearish; Phoenix sees its outlook cooling versus a few days earlier.

The odds of late season heat are slipping; it is still possible (look at the Range plots for Burbank). For now, its cool and the September degree day anomalies for California are coming in near-record bearish. No wonder BOM bombed. 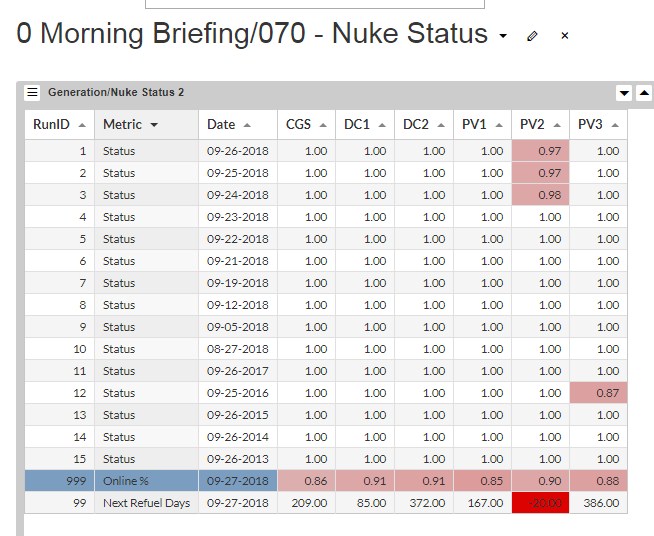 Hey! Here’s a bullish nugget to chew on – PV2 is finally heading down for its refuel; we’d expect it to be at ZERO this weekend. Coincidentally, that 1200 MW is about equal to the demand destruction from cooling temperatures. 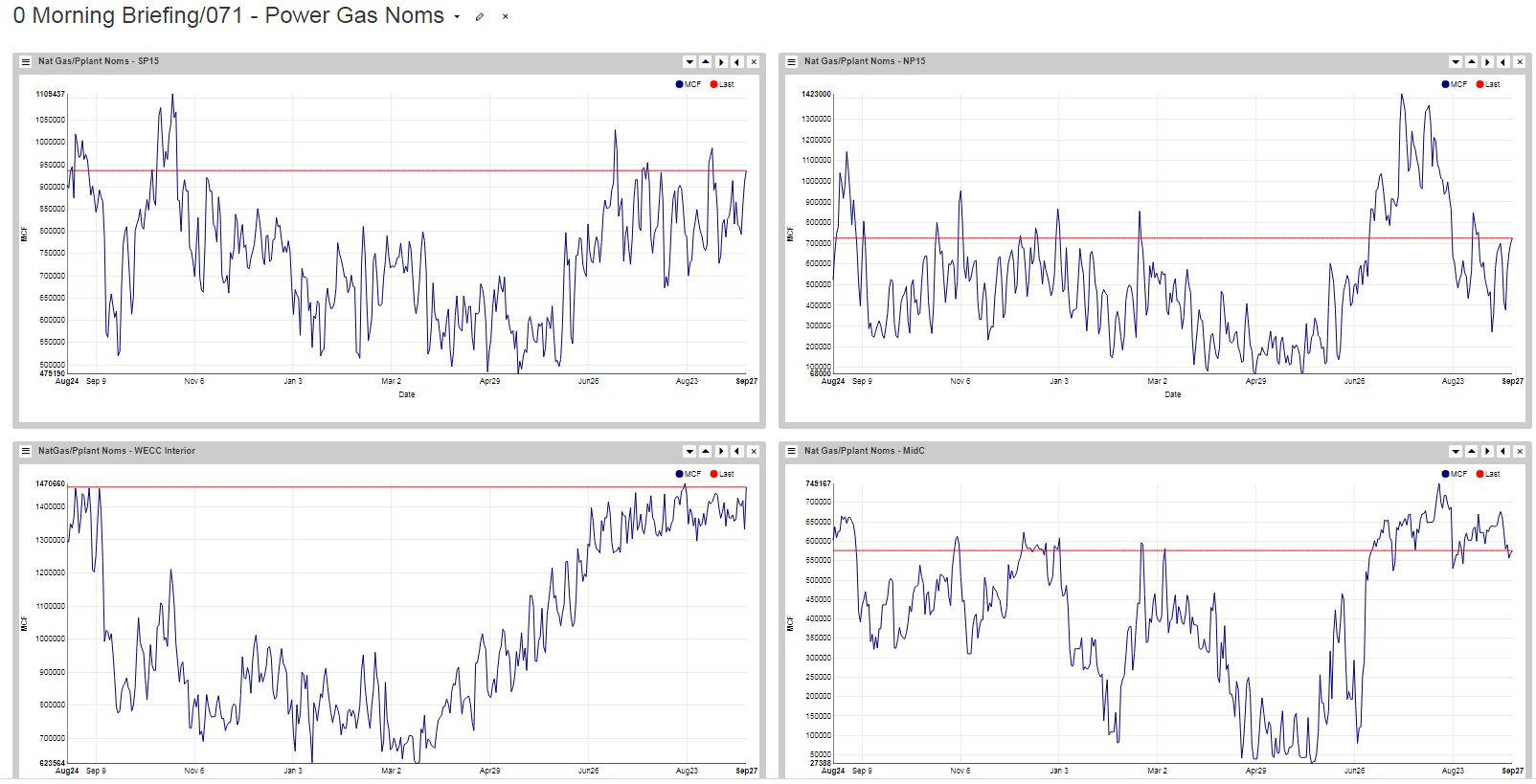 Gas noms at both MidC and Palo remain strong and about average for California. Digging deeper, here are the unit-level noms: 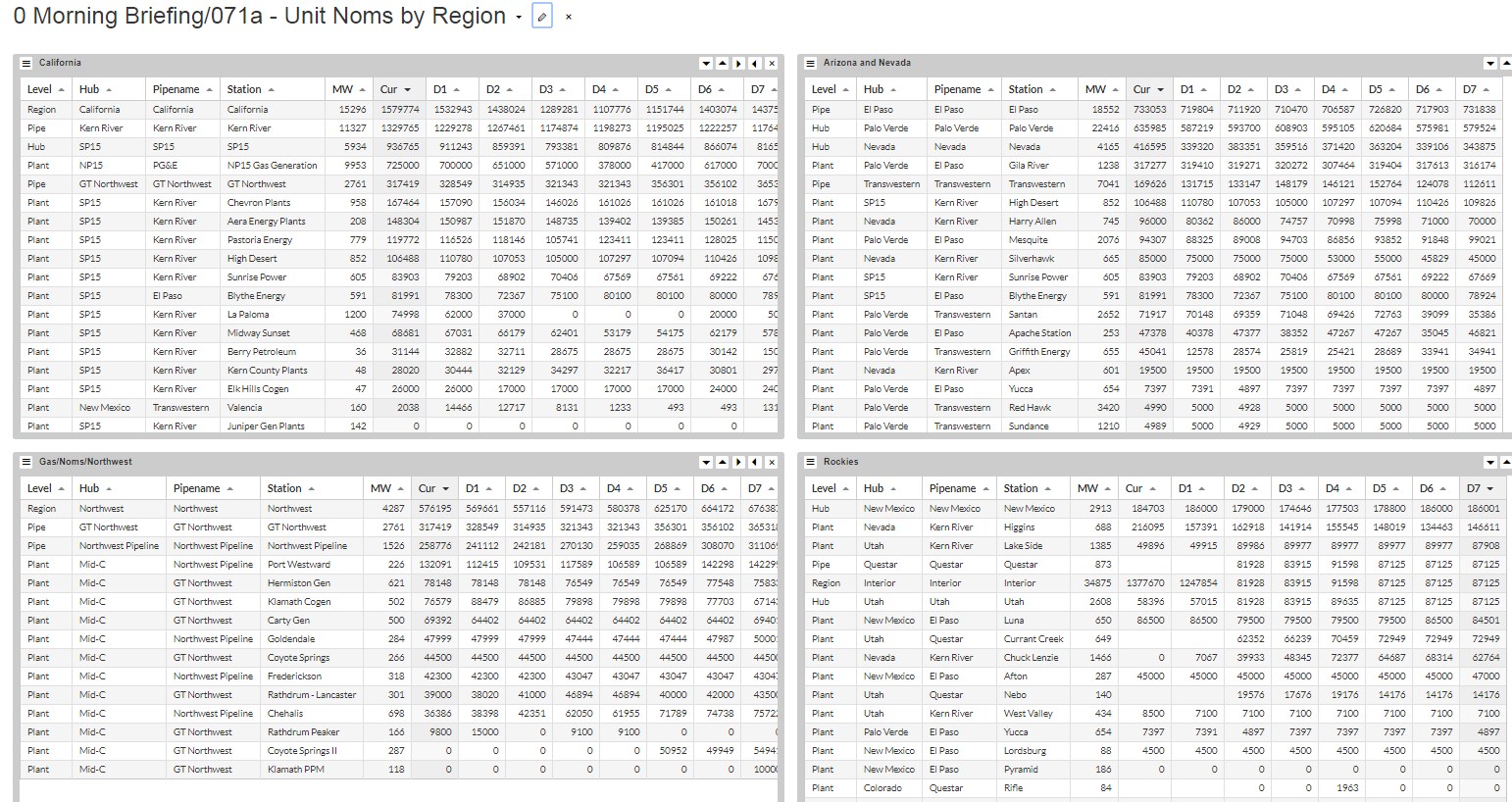 Mostly posted this to announce a new dashboard; hard to read for me.

Gas outages remain low, that will change with the expiration of September.

A becalmed day, yesterday, across the WECC; not only did it not blow, but solar was also off at both ZP and NP.

We mentioned the subtleness of change in some of the fundies. Temps can swing violently, even from the 00Z to the 12Z; hydro is more of a slow crawl. One trend we’re seeing is an increasingly wetter Northwest. Contrast today’s precip forecast with Monday’s: 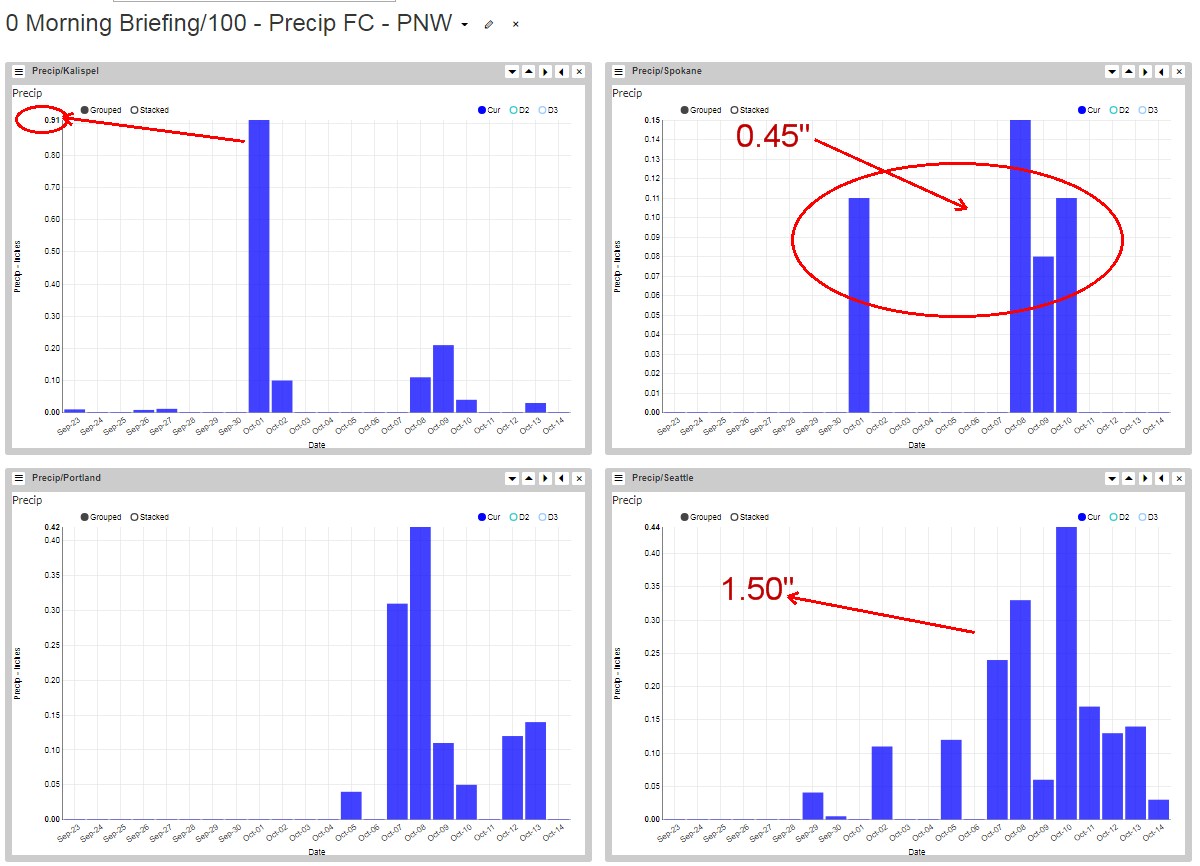 All stations about doubled in total precip over the next 14 days. Still not the massive events that will crush the MidC but its not zero, either. 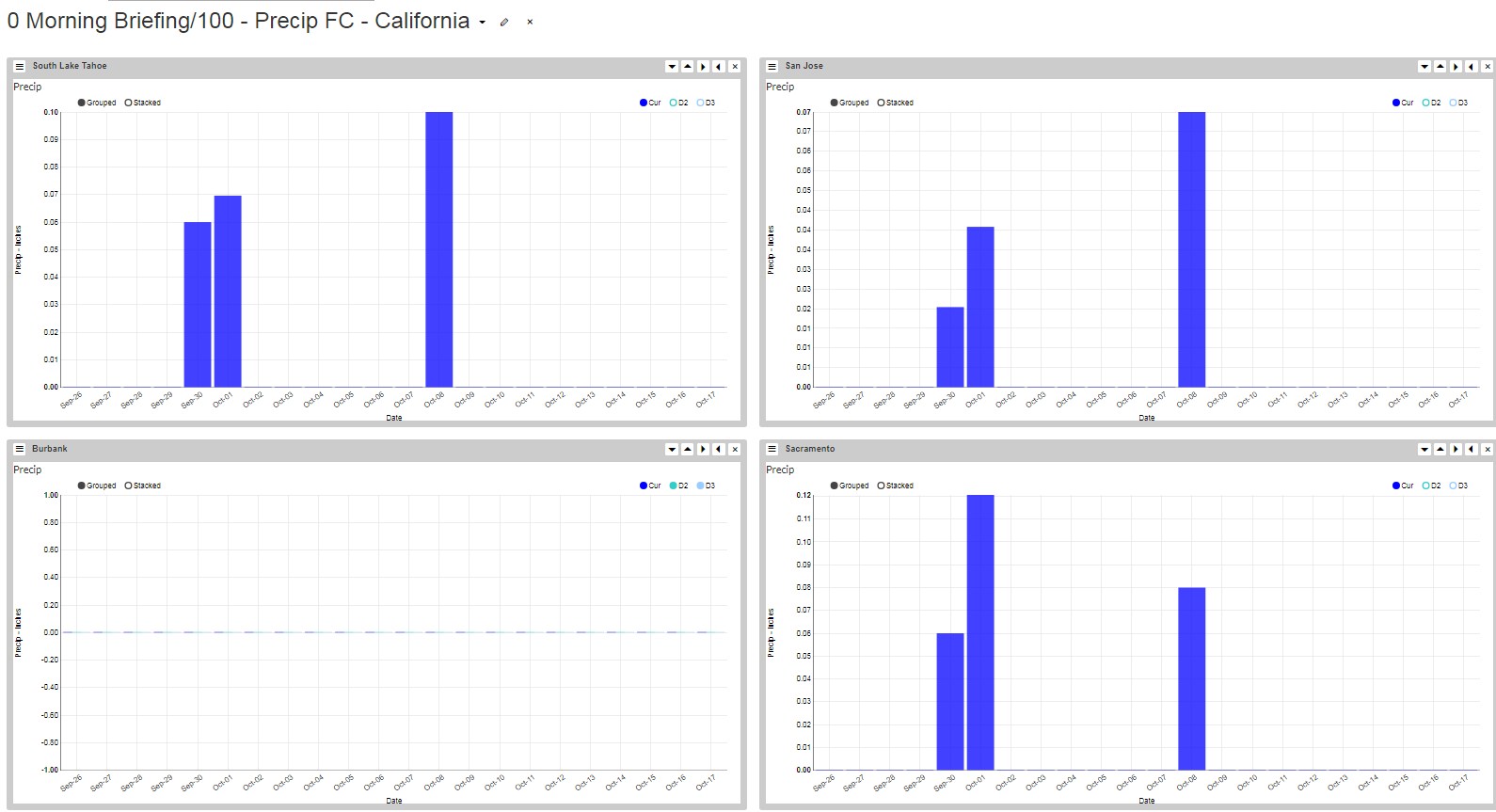 Even our friends in the Golden State will reap some rain; hardly a trace but its the first since spring.

A not subtle change are flows on the Columbia at the US border; these are up 30% (20kcfs) in a week. Some of that largesse is going through the turbines, the rest into the reservoir:

Coulee’s reservoir is just 1.4 feet from its ten-year high; BPA has bullets should they need them. But, alas, they don’t need them, they needed those bullets on Aug 5 when MidC cleared 70k heat rates, but no bullets were fired then. Still wondering why the feds didn’t draft Coulee another five feet? How easy would it be to refill today by buying those $25s?

The Lower Columbia has seen a surge in energy production while the Lower Snake is sideways.

Inflows to Coulee are not just up at the border, pretty much most stations are seeing modest rallies. With above normal precip, those modest bumps may become material. 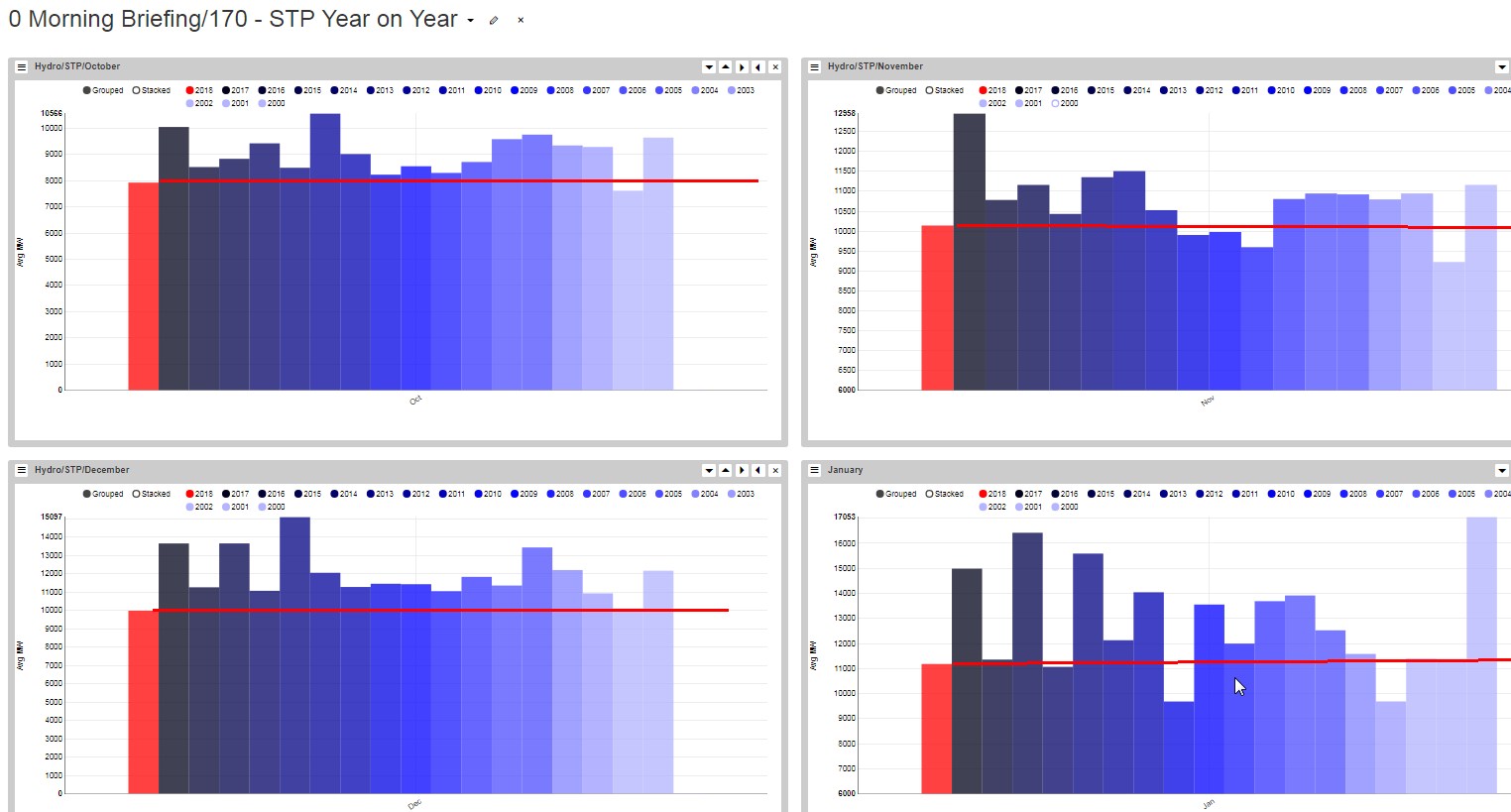 Meanwhile, our other friends in Portland, the guys, and gals running the NWRFC, got bullish on the MidC last Monday. They cut energy across their 120-day forecast window. Now our Portlandia pals are essentially predicting the tightest Oct-Jan water in twenty years. LOL! 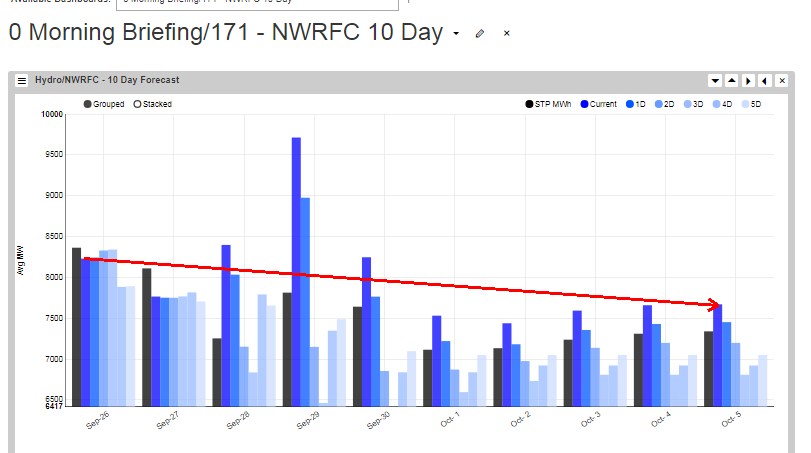 And they’re cutting the front, too. 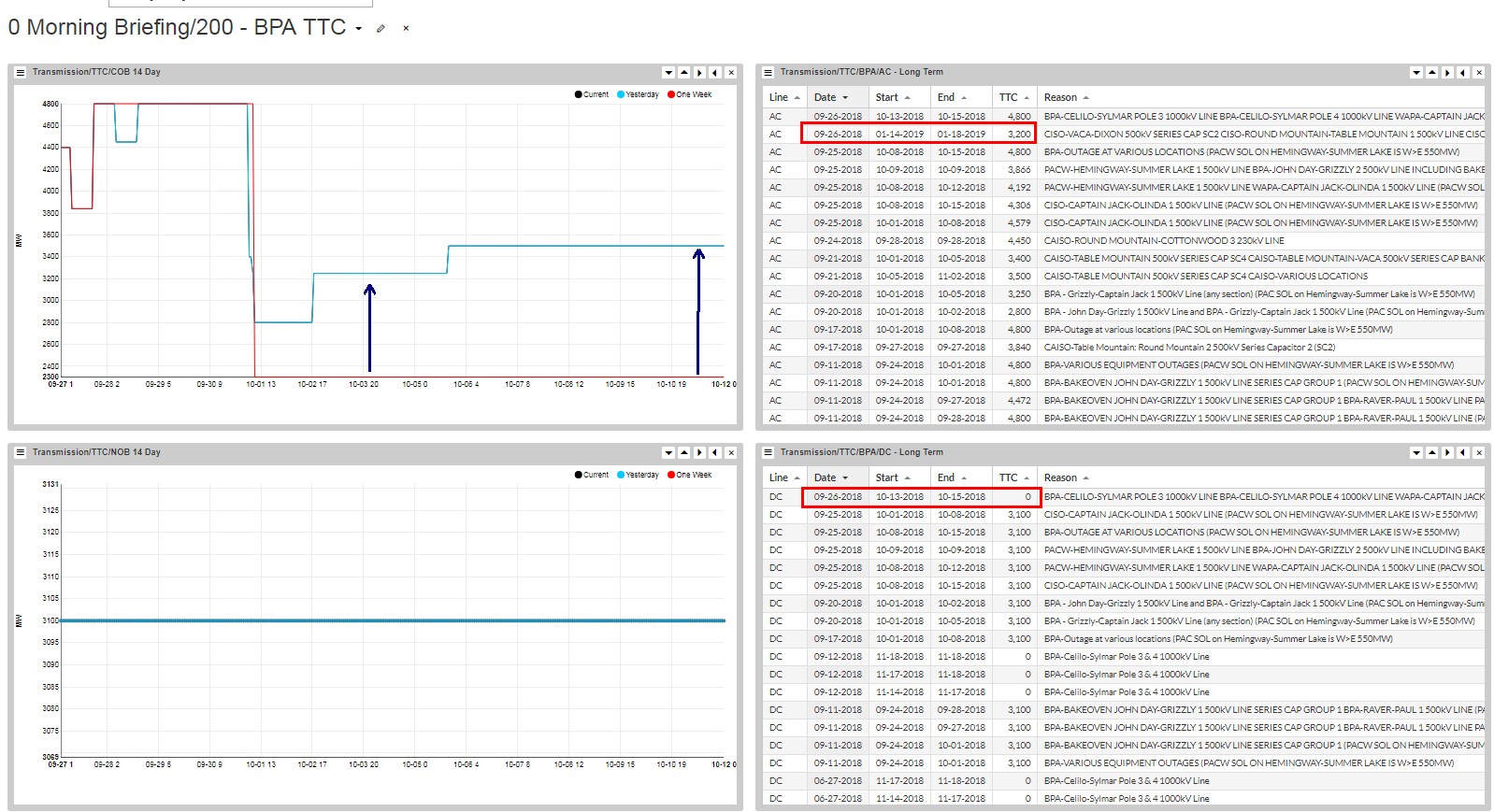 And they’re neighbors, our friends at BPA, also got out their scissors and cut the DC to zero a couple of days earlier than the last forecast. Now the line’s outage starts on Oct 13, just two short weeks away. So what’s the term market do? It rallies Oct.

Flows from Canada switched direction, and now energy is pouring across the wall-less border like a  horde of angry MS13 migrants.

Nothing to get excited, or depressed, over. We still like buying the spreads to MidC, we think the wet weather and accelerated DC outage will take its toll, but you have a week or two before any of that comes into play. Plus, the south is getting more bearish, so we’d probably hold off until next week on any big plays.