We see some hints of a weather reversal; from cool and bearish to warmer, perhaps the first hints of those Santa Anas? 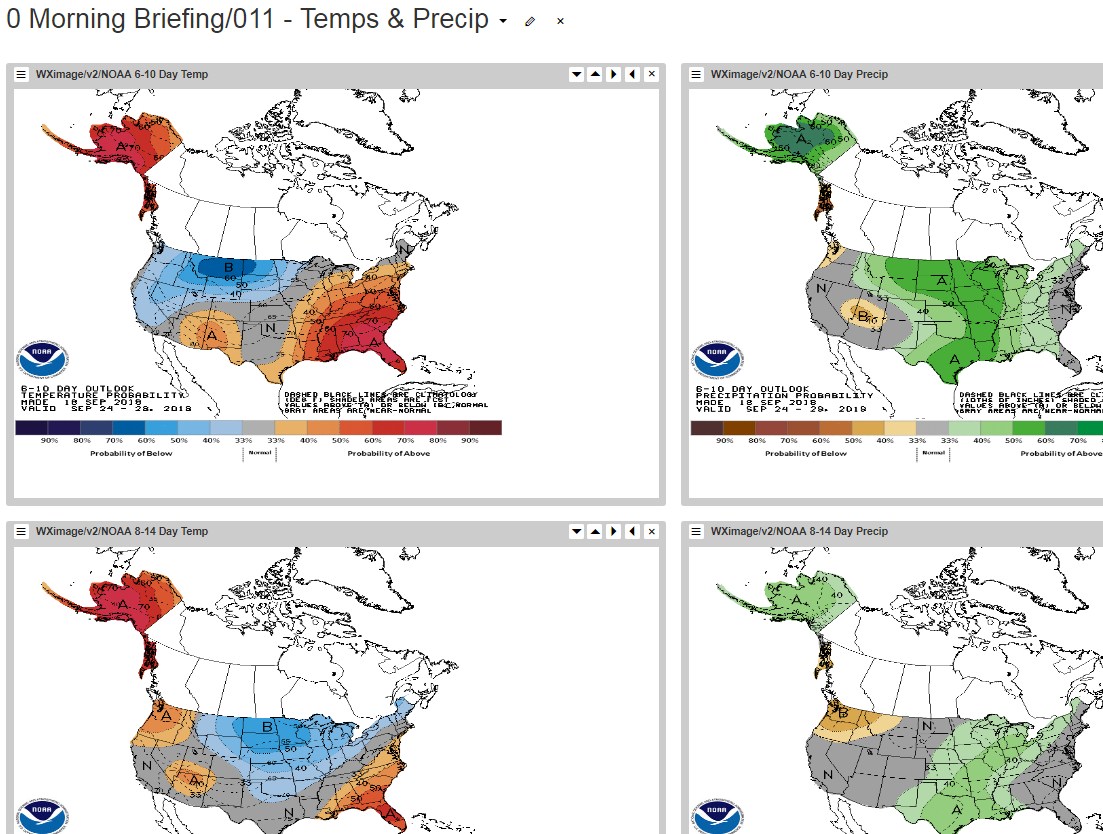 The Northwest turns much warmer in the 8-14 day which spills into California. Drilling deeper, we see this on the 27th: 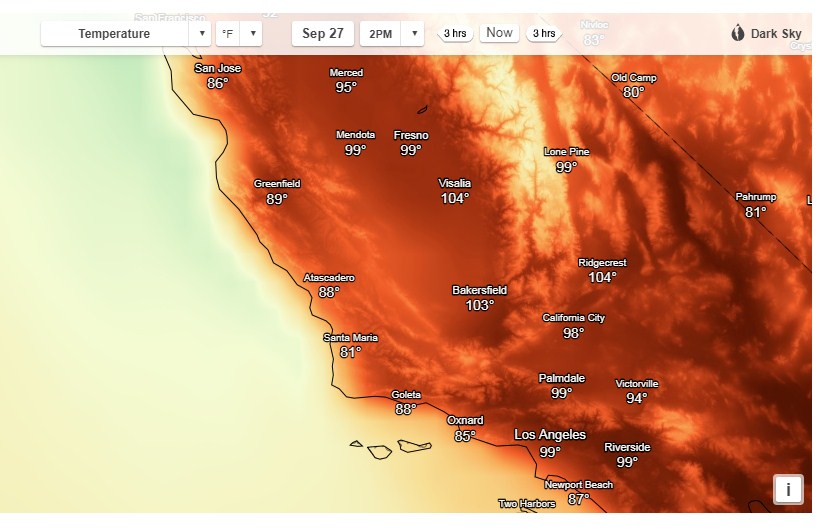 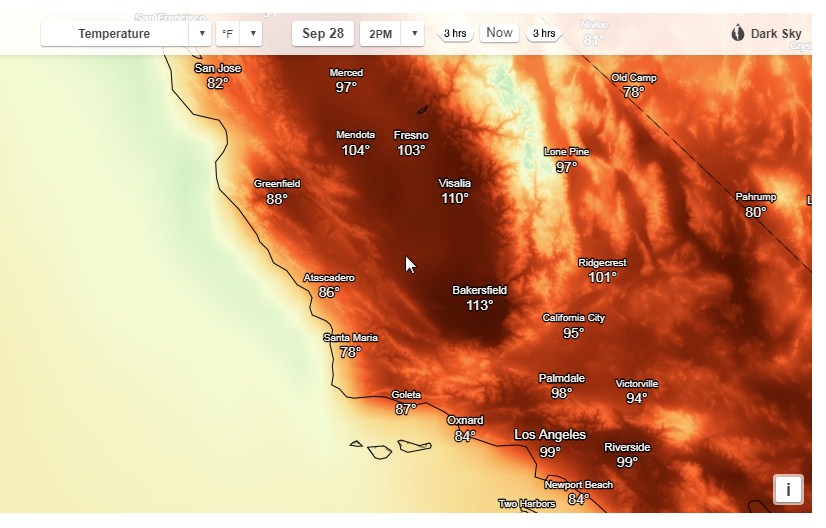 A bit far out to bank on, but we’ll be keeping our eye on late next week. Check out Bakersfield – 113; the San Juaquen bakes in this forecast. If it arrives, expect BOM to soar, so will Prompt and the latter already has been bullish, relatively speaking. 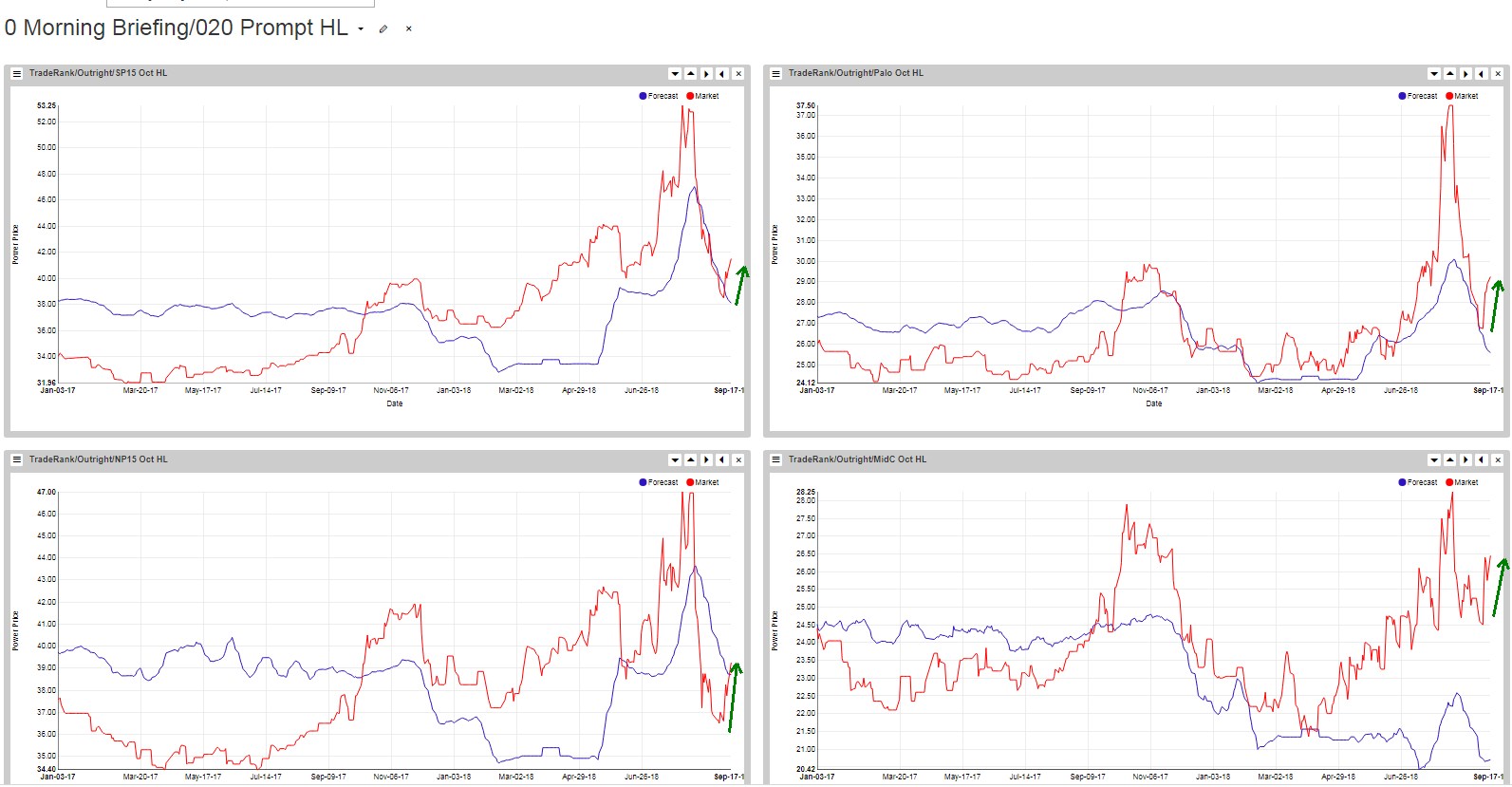 All four hubs are up from the lows, the great sell-off of 2018 has ended. We’d expect markets to bounce around in this range without significant weather anomalies; those DarkSky plots are substantial to the bullish side. That said, anything beyond day six must be skeptically looked at; caveats aside, we’ve also seen high-pressure driven heat events build as well as decay. 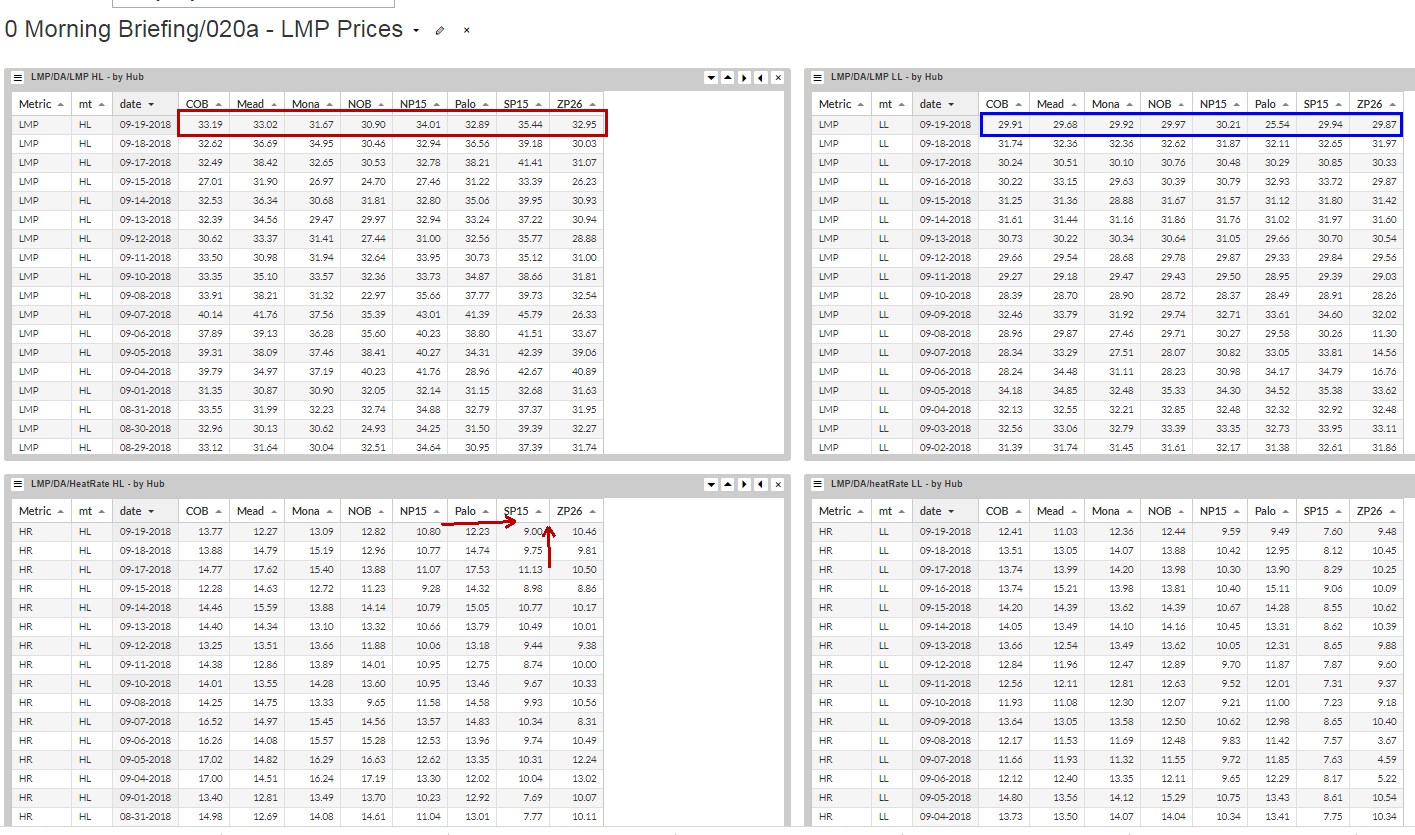 The On|Off remains tight; the locational LMP spreads even tighter – barely a few dollars separating all of them. The SP heat rate tanked, now NP is trading premium. 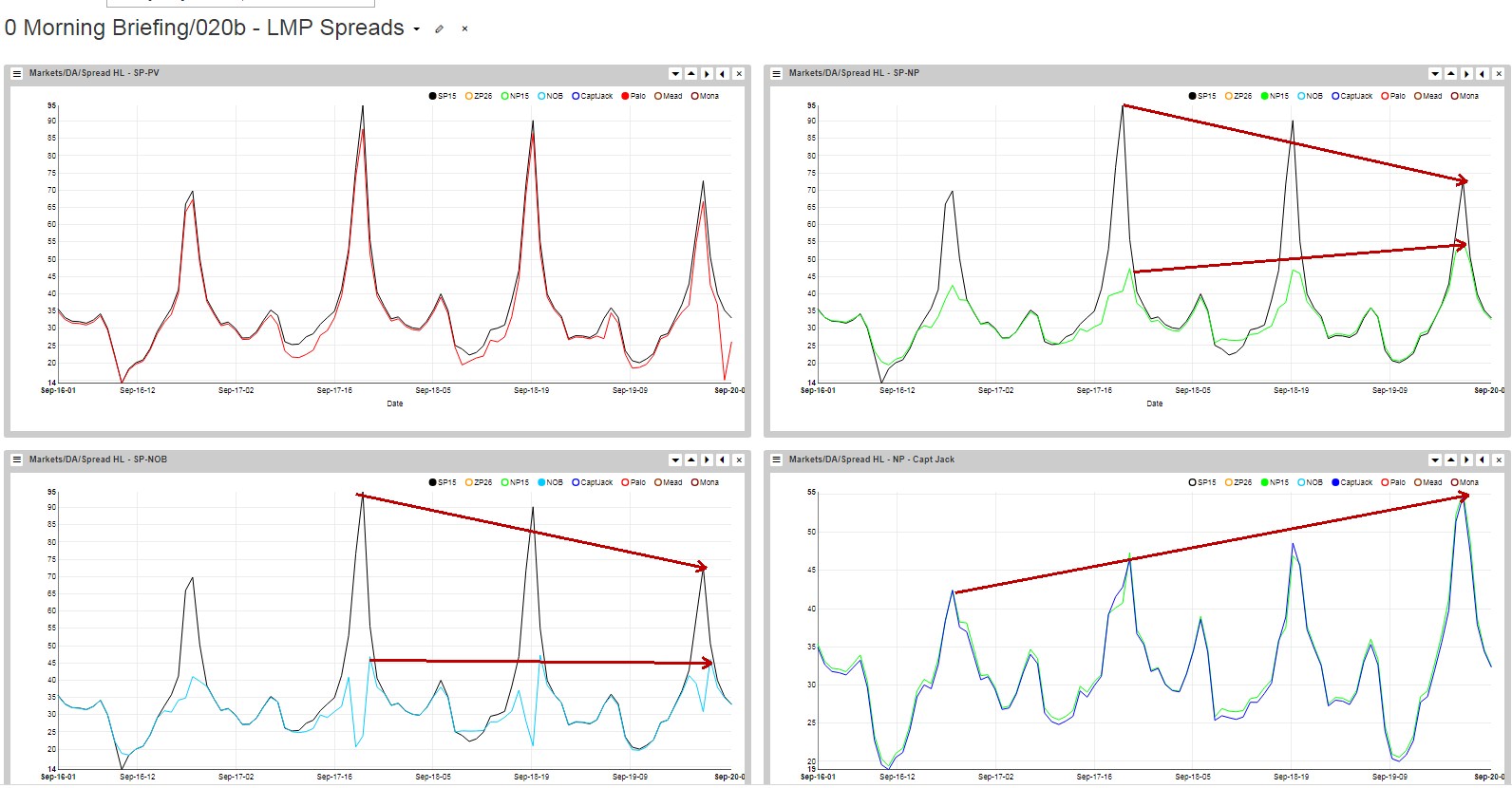 SP – PV is still tight; the SP-NOB has come in because SP has dropped, the NOB is unchanged. The SP-NP has also tightened because the NP rallied while SP fell, and the NP-COB has little congestion. 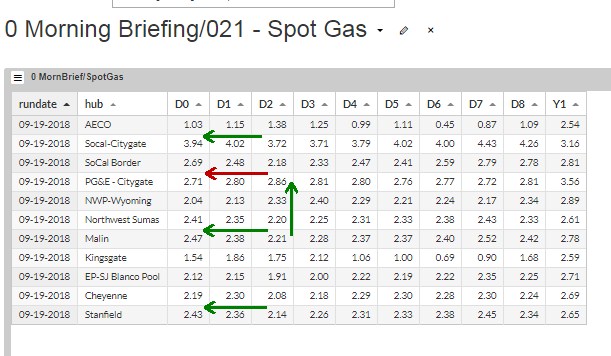 PG&E Citygate dropped $0.15 at the same time that Socal CG rallied $0.17; While PG&E fell, Malin rallied, and the spread collapsed. Stanfield and Sumas also rallied, probably because the Northwest is running almost all its gas units to offset seasonally low water. 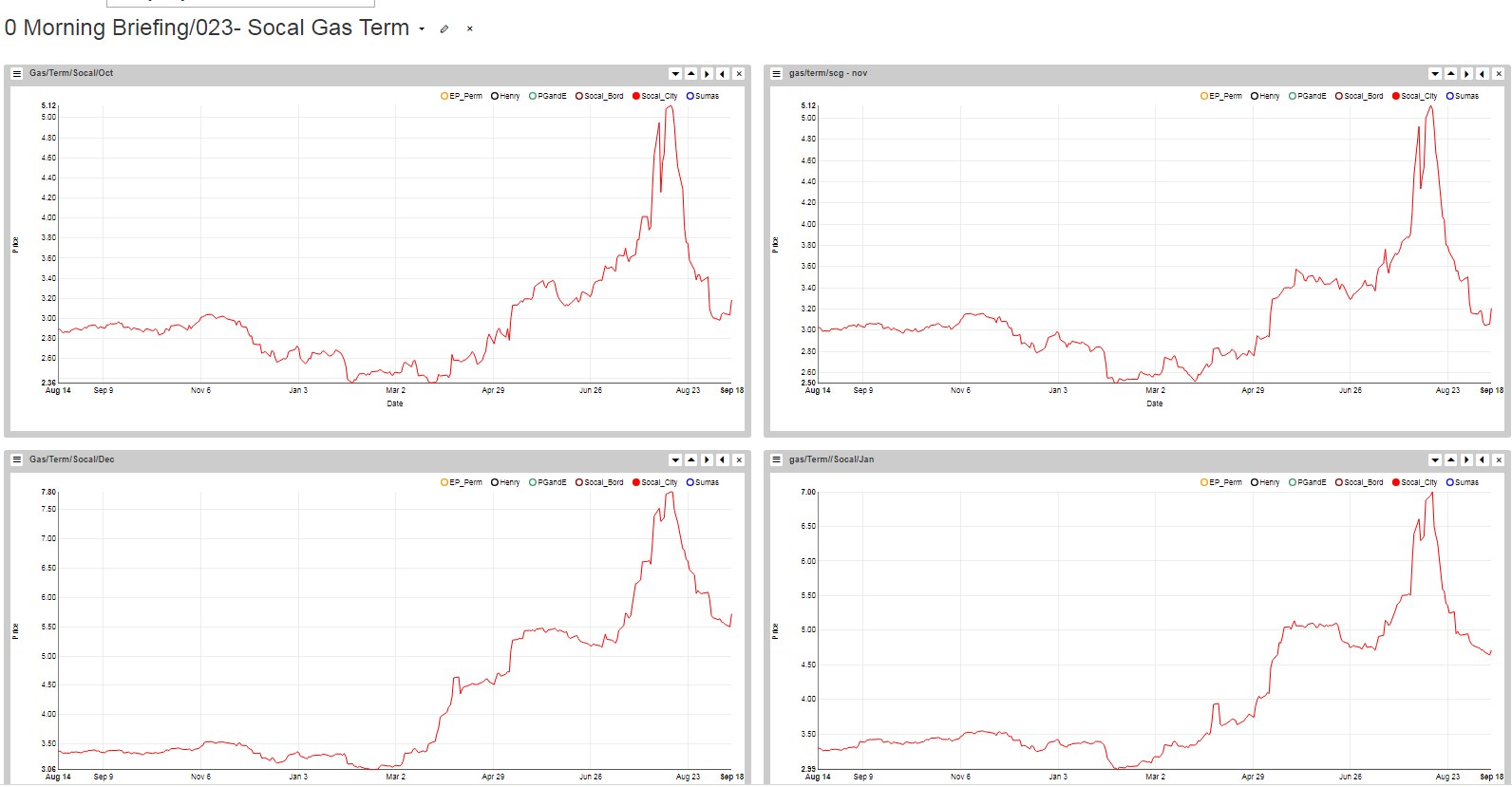 Speaking of bottoms, Socal Citygate term markets have found one; the bleeding is suspended, at least for now. Should we get that LA heat next week, expect these to soar. 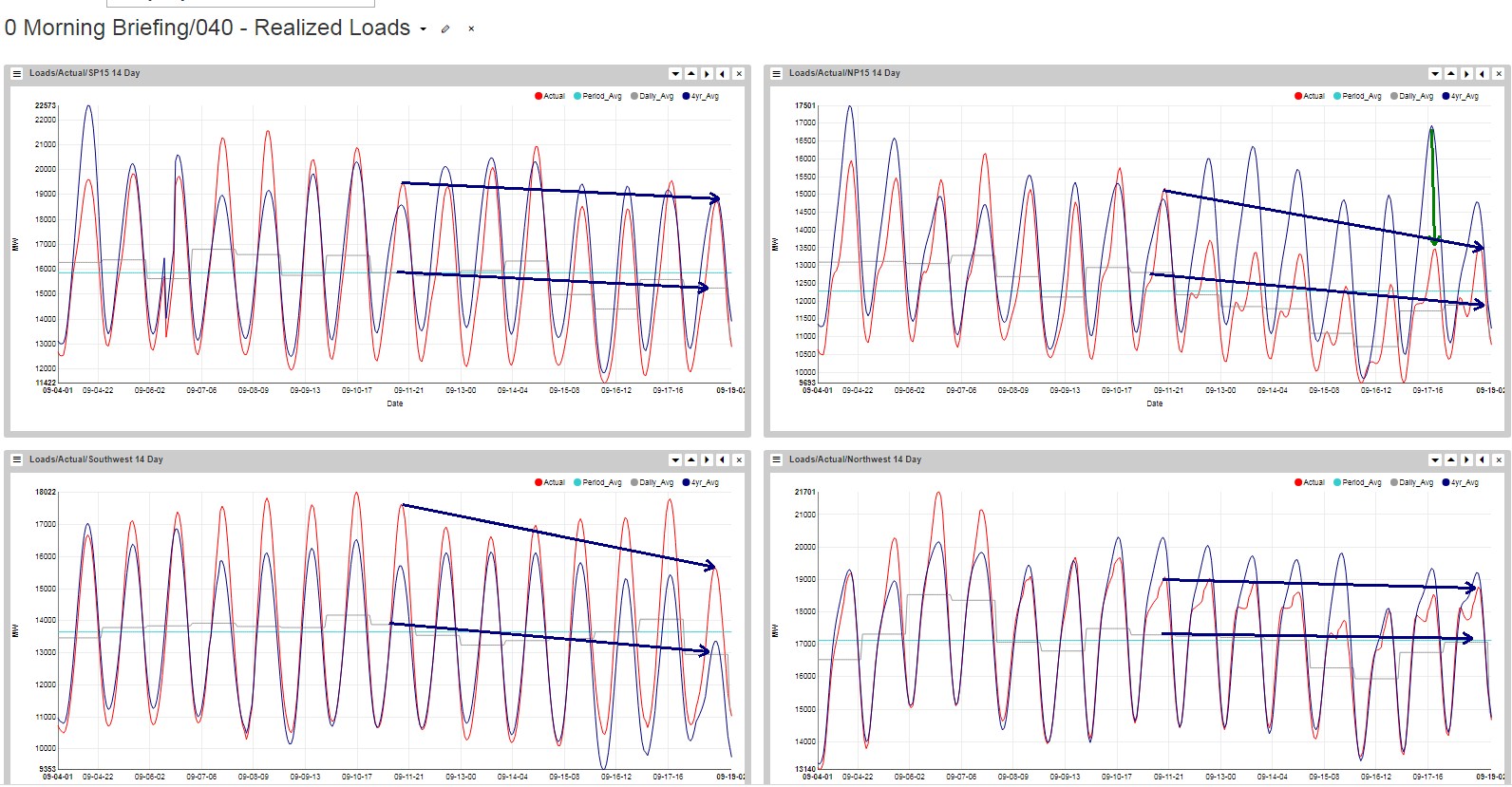 Loads are off across the WECC. Take a look at the NP four year for yesterday; goes to show how high loads can get with some heat. 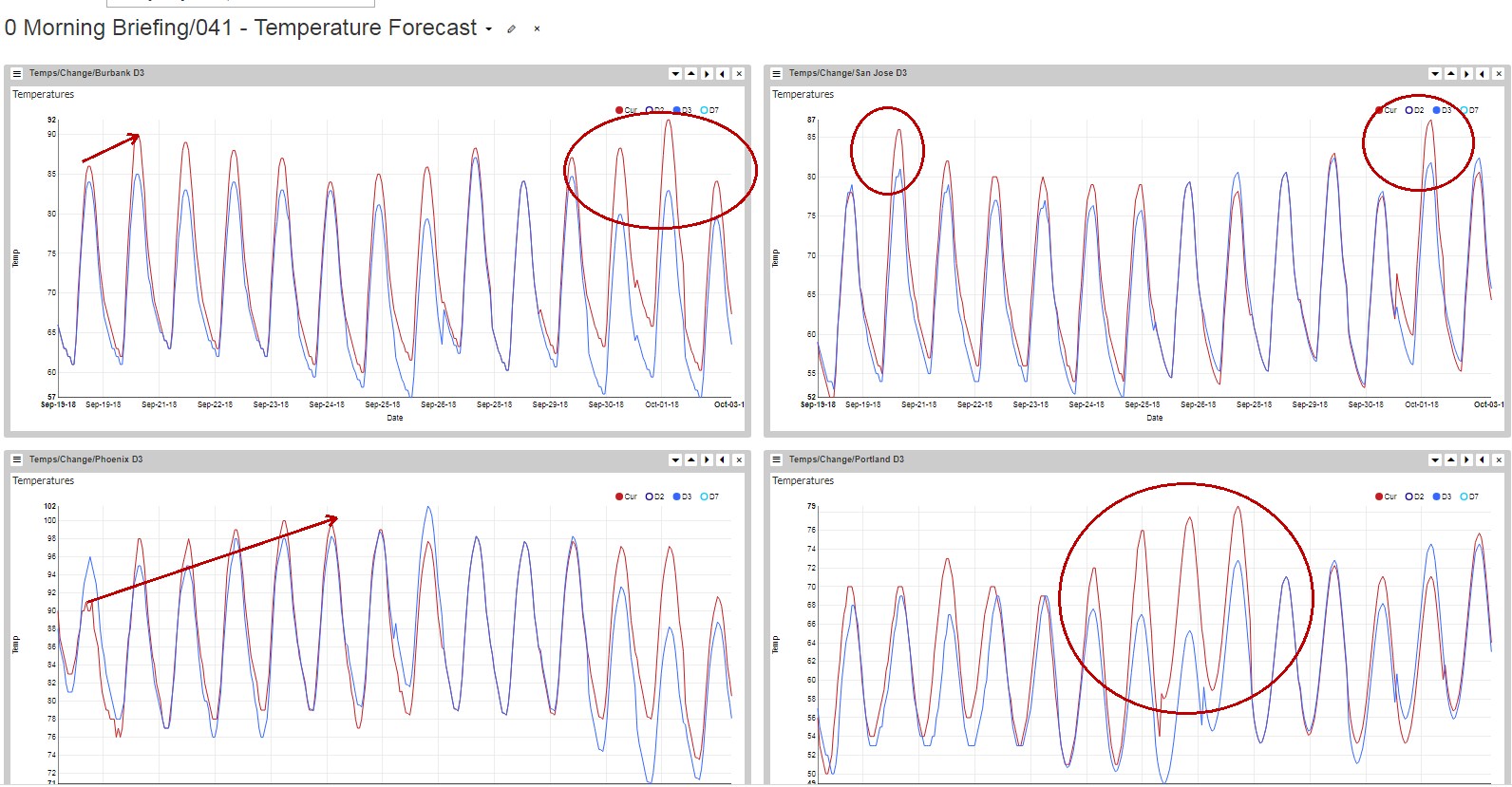 Not the significant changes in the Portland forecast in days 6-9; Burbank shows a rally in days 10-12. Phoenix is projected to be warmer, too. 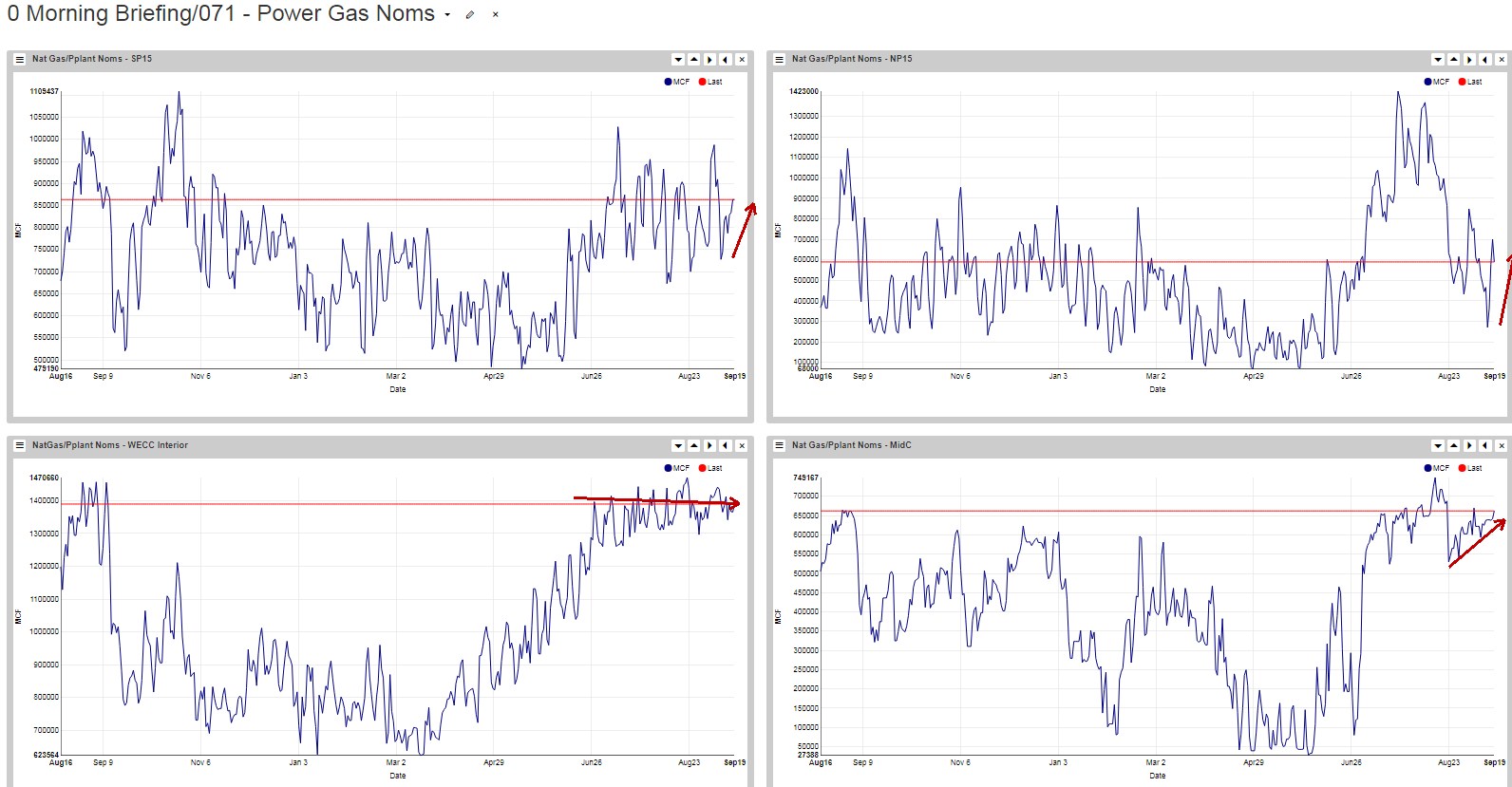 Palo and MidC’s gas noms are still summer-tight, not so much in California, though NP’s gas burn rallied off of last week’s lows. 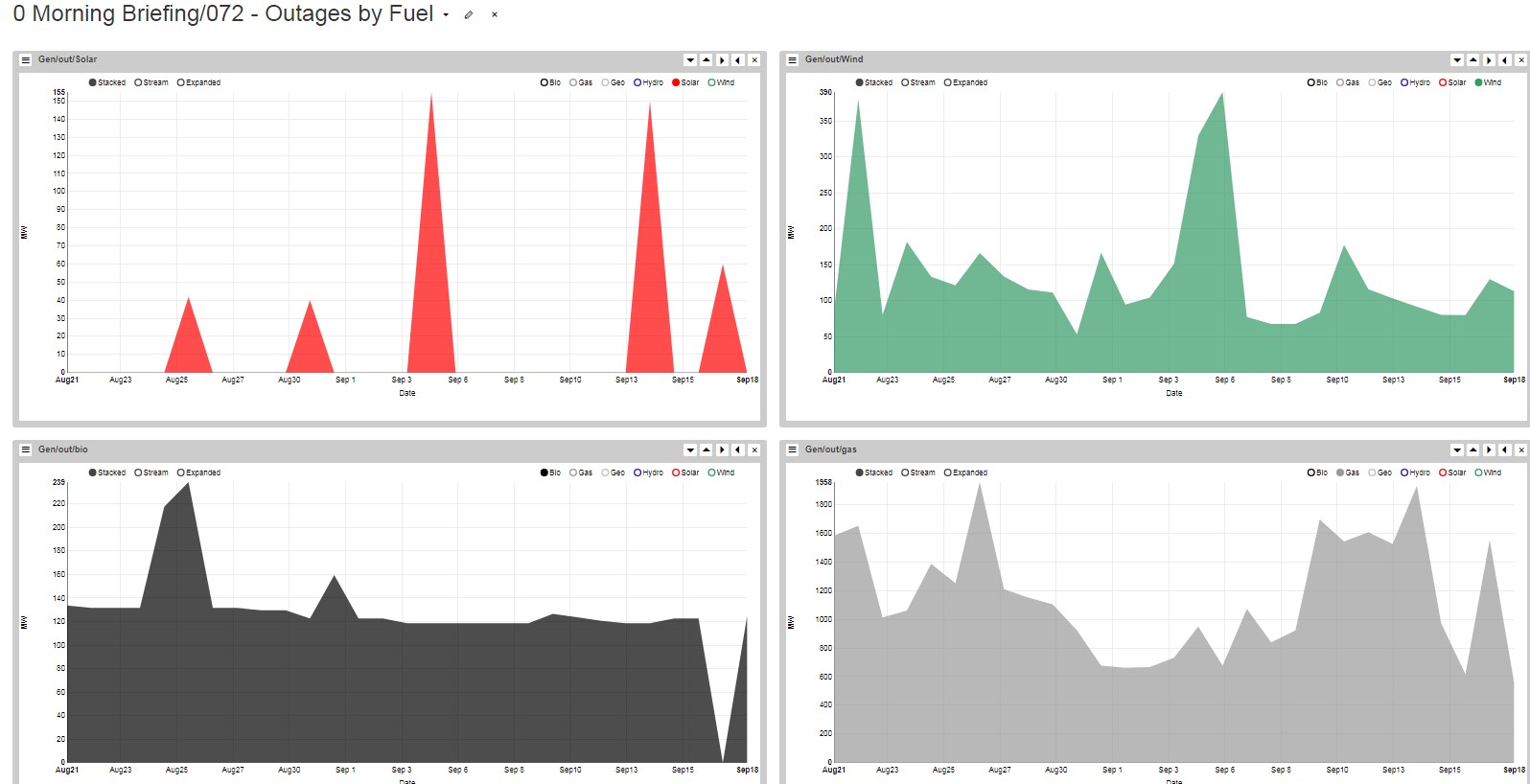 Not a lot of outages, but those are coming as we approach Fall outage season.

Total wind declined; it fell at all three hubs. 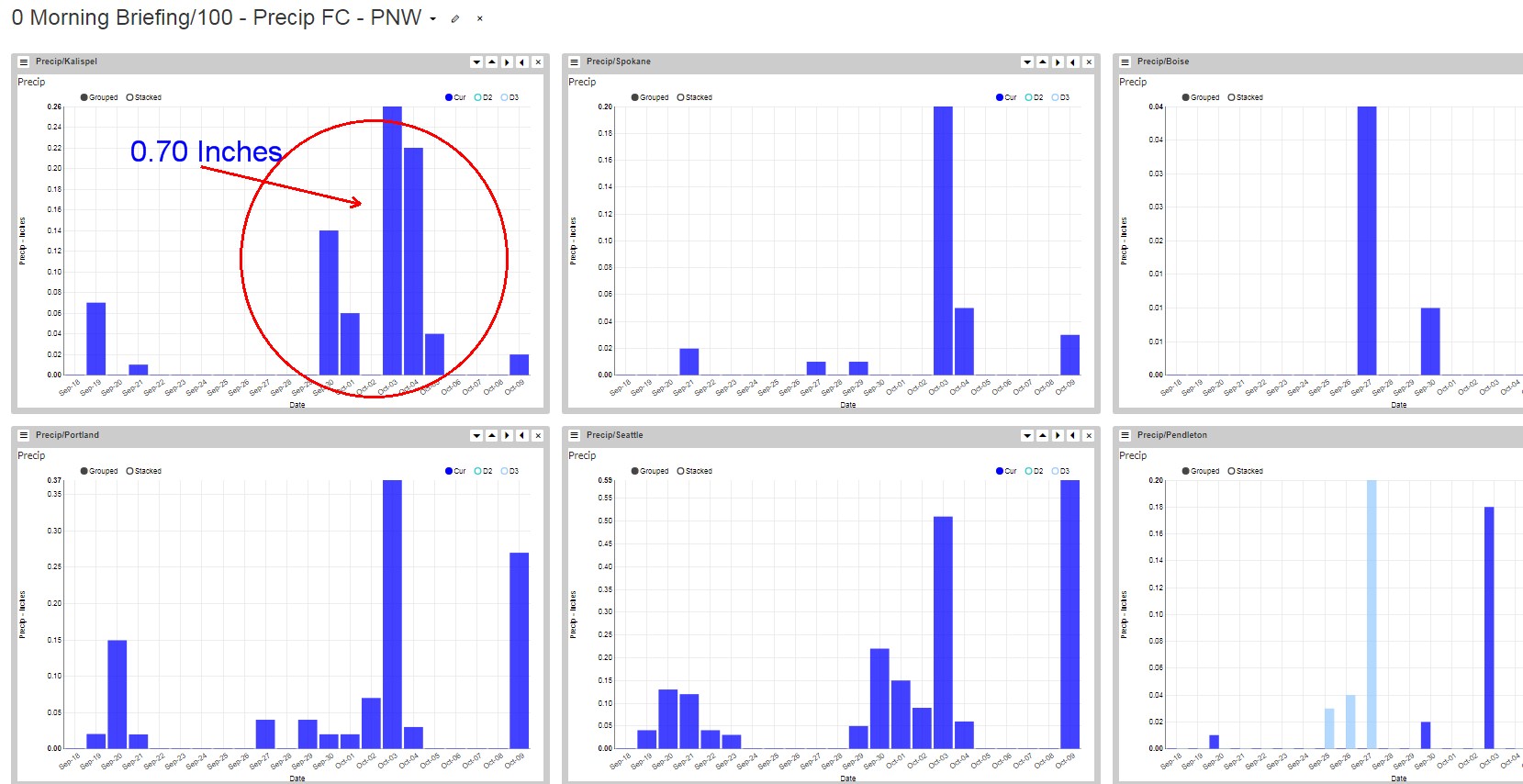 This precip forecast surprised us; you don’t see it in NOAA’s pretty plots. Kalispell is projected to receive a cumulative 0.70 inches over a week; that is material if its real. There are NOAA hints as well; the system doesn’t come from the Northwest, its a spill-over from the Plains. 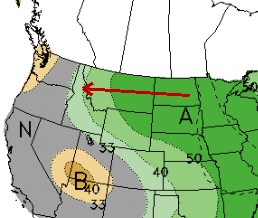 The Peace is at peace; it’s not even shaping. Arrow cut and the border flows are well below average.

Take a good long look at those Coulee discharge plots; that is the bottom, it won’t get any lower than this for another 11 months.

Most of the mainstem projects showed energy rallies, week-on-week.

This is a new dashboard and pulls Net Demand from the Forecast. Nearly every hub has slight rallies before entering the collapse to winter. Even MidC which is a winter-peaking system. Why you ask, would the MidC’s net demand decline going into winter? Doesn’t its loads rally? Yes, they do, and so does hydro, which rallies faster than demand, hence the decay in net demand.

Shasta got tagged only because its discharge is now above average. 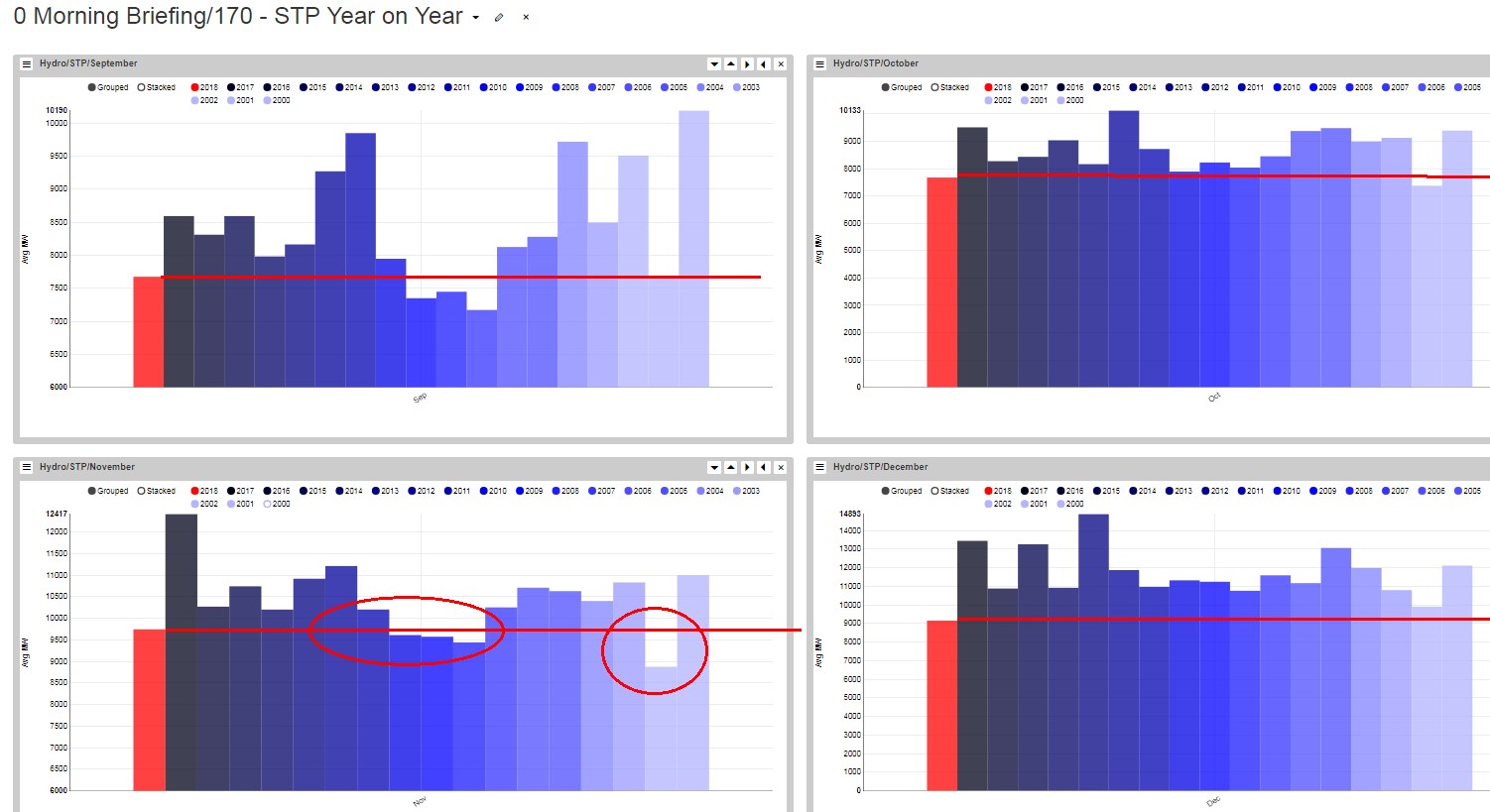 Had to comment on STP; the NWRFC again raised its Nov outlook (two weeks in a row) by another 800 aMWs, they raised Dec, too. Nov is now, after 1600 aMW bump, reasonable, perhaps still a shade light.  Dec, however, is way too low; we think it needs another 2000 aMW to make it right. 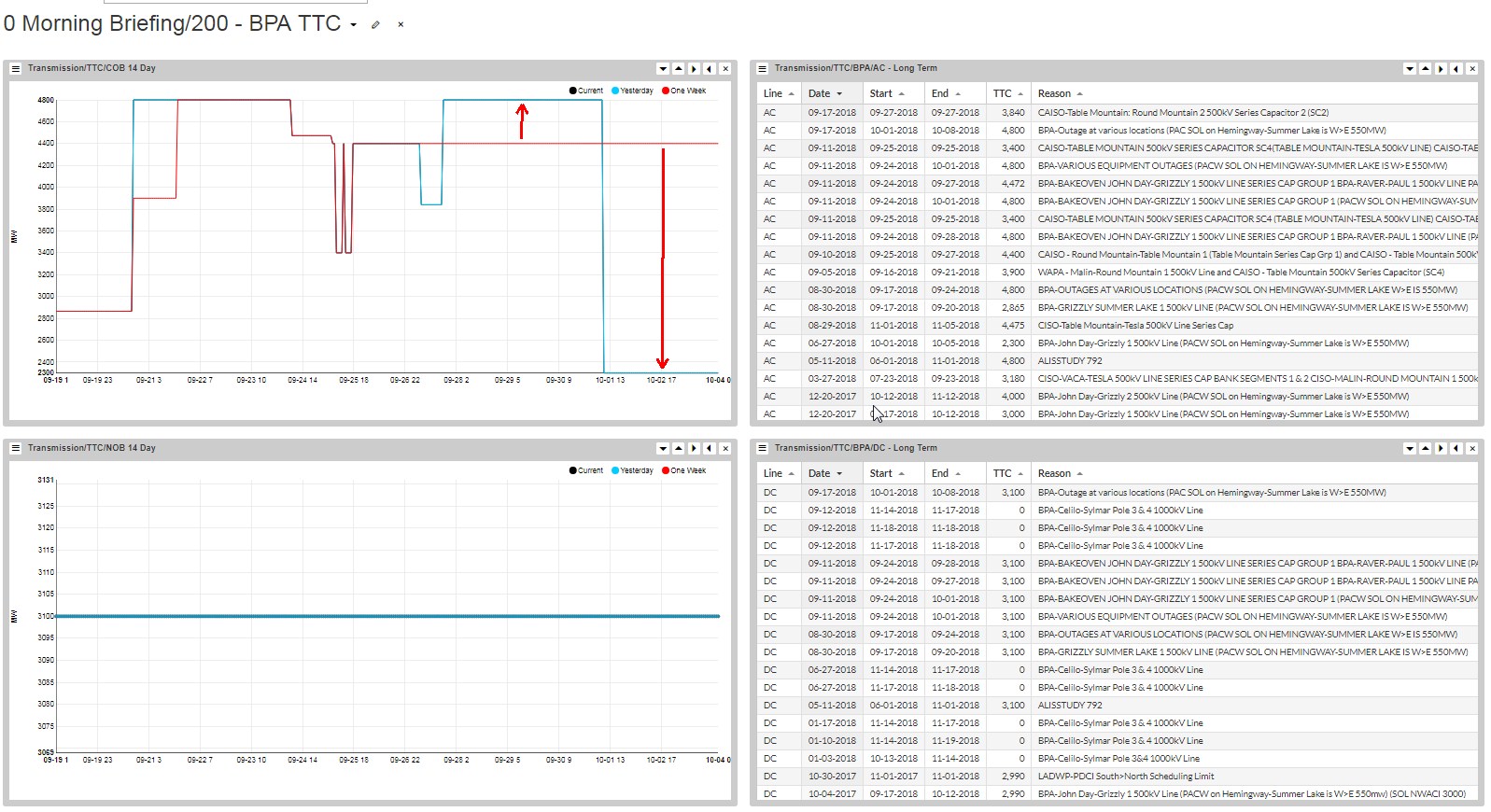 A few modest tweaks to the AC, nothing changed on the DC.

The Northern Intertie is not flowing much; total flows on the COB are sharply declining, reflecting those non-existent NP-COB spreads. Path 15 flows north, and 26 is going both directions. Palo had robust exports yesterday on a few hours.

We were biased long last week, we still are, but might be buying more off of those heat hints. Prices feel cheap, really cheap at SP if there truly are hints of 100+ weather in LA. Trading SP15 is like buying one of those 3X EFTs; you get an exponential move both directions off of Citygate and Power.