Weather looks more bearish, where is the Autumn Santa Ana? 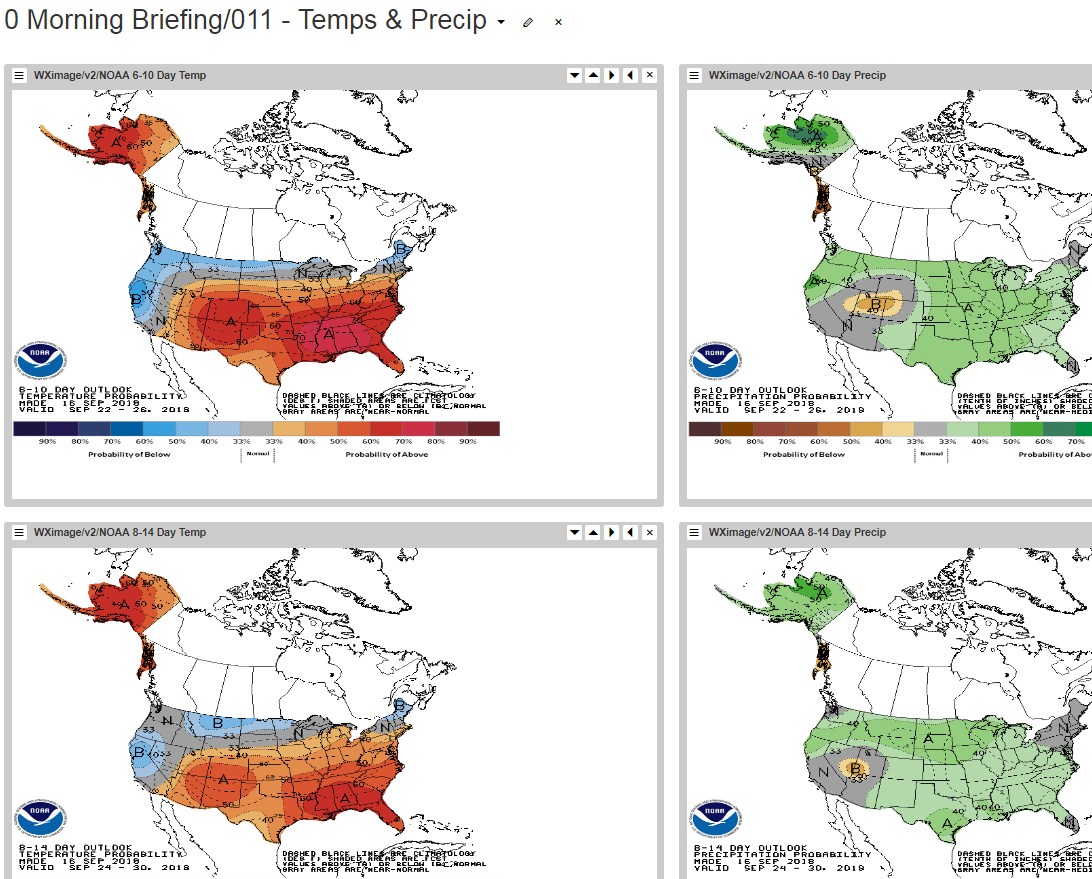 While going out, last week, Socal stayed warm with positive anomalies, these forecasts (Sunday’s) put cool anomalies into the Golden State. These forecasts also put wet anomalies in both the NW and Cal. That’s a change, the first time we’ve seen rain in CA. 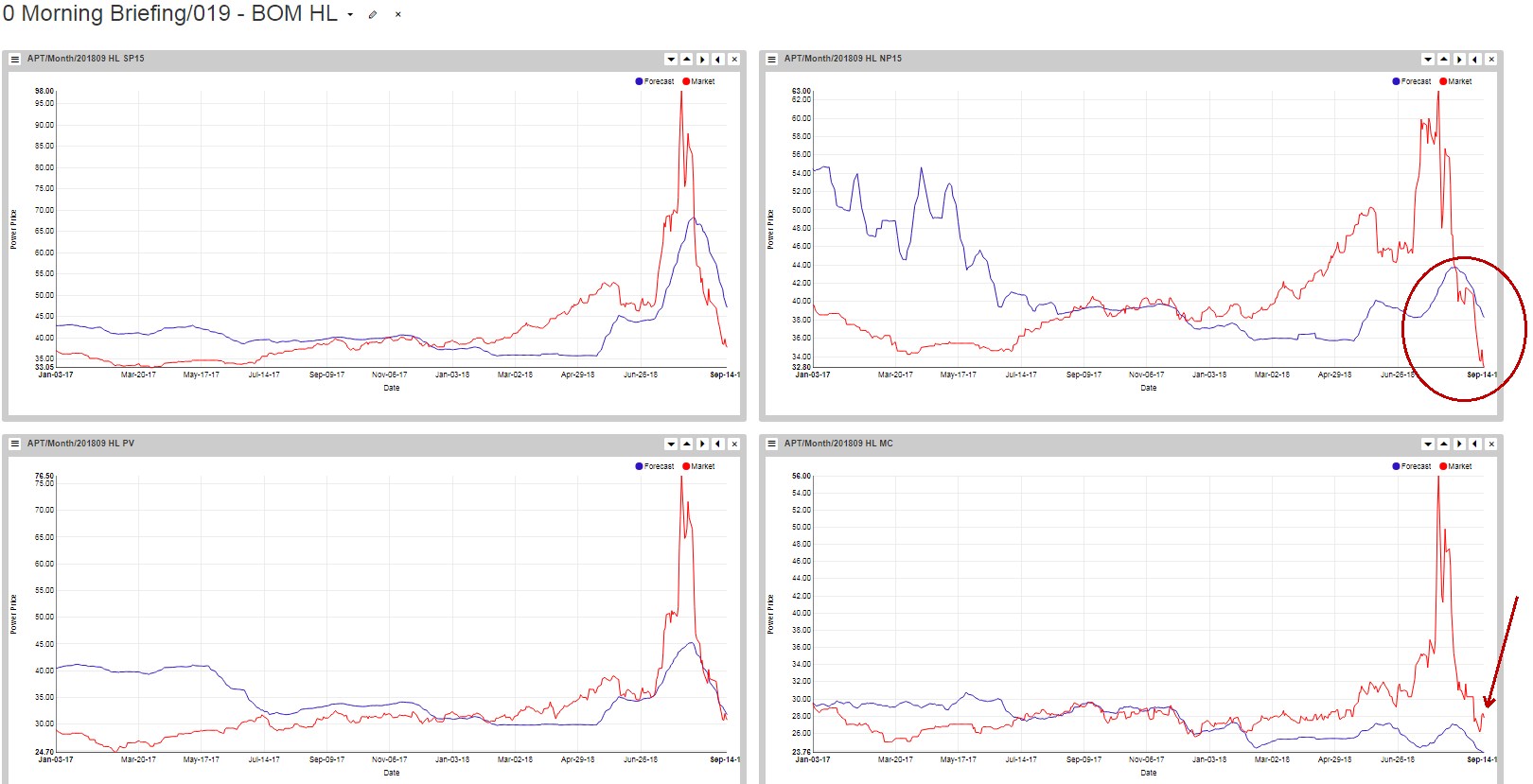 BOM continues its infamous slide from those even more infamous highs of early August; only the MidC has arrested its collapse, and not by much. 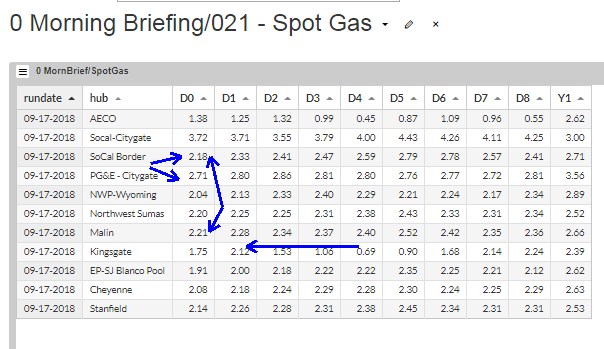 Socal Citygate seems to have found support in the $3.70 range; its traded there for four straight days. Canadian gas didn’t collapse over the weekend like it has over so many summer weeks. PG&E now trades premium to Socal Border – so does Malin! 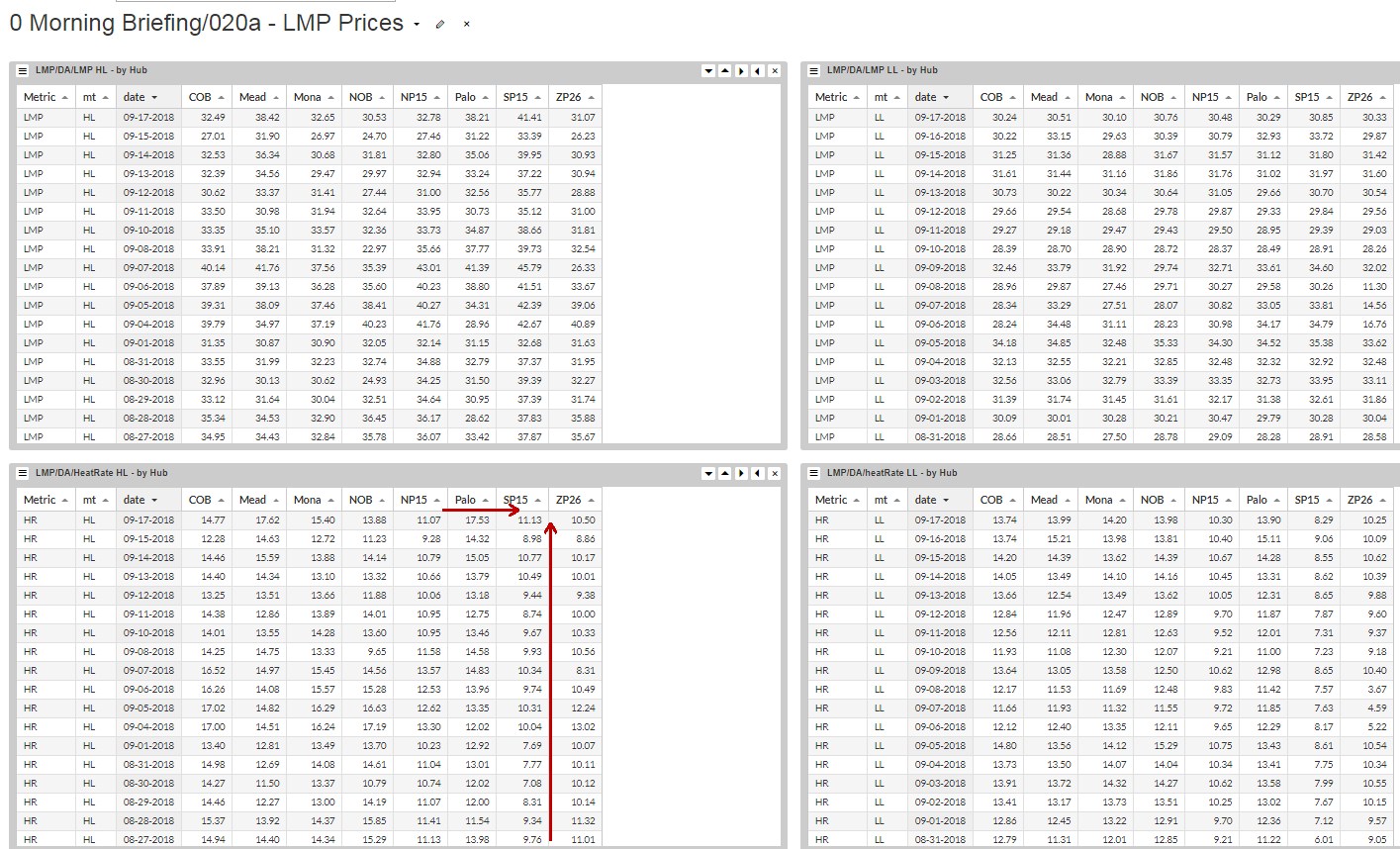 SP15’s LMP heat rates have rallied with the collapse of Socal Citygate. Heat rates outside of Cal remain strong, especially at COB and NOB, though NP’s heat rate traded beneath SP, something not seen for a while. ISO On|Off spreads are widening from last week but remain tight at COB|NOB . 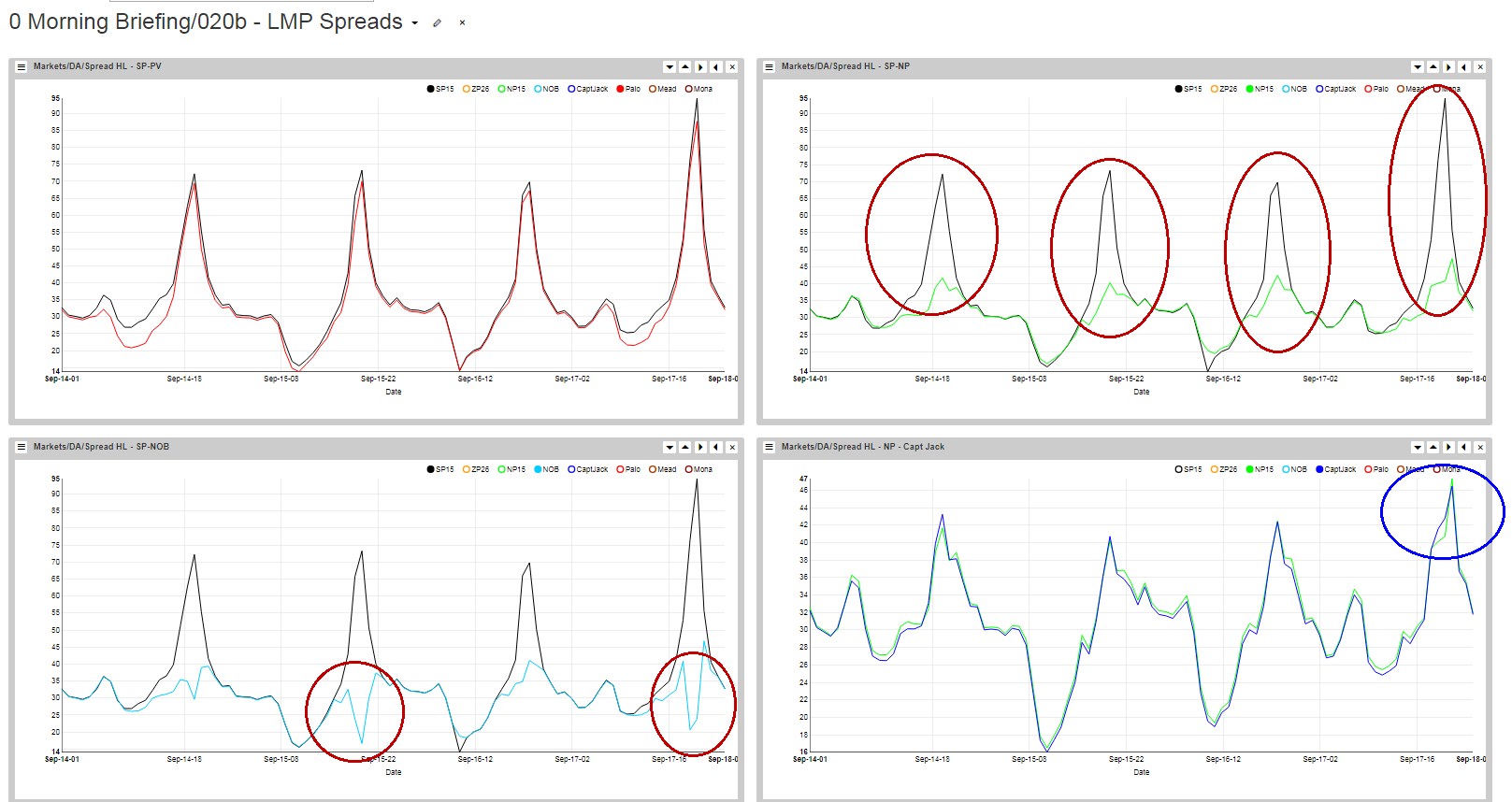 Spreads between SP and PV are very tight because Phoenix is very hot and LA is not. SP to NP spreads are wide just because SP commands such a Solar Ramp premium for those few hours. NOB looks dysfunctional, collapsing on those solar offramp hours. NP and COB spreads are non-existent. 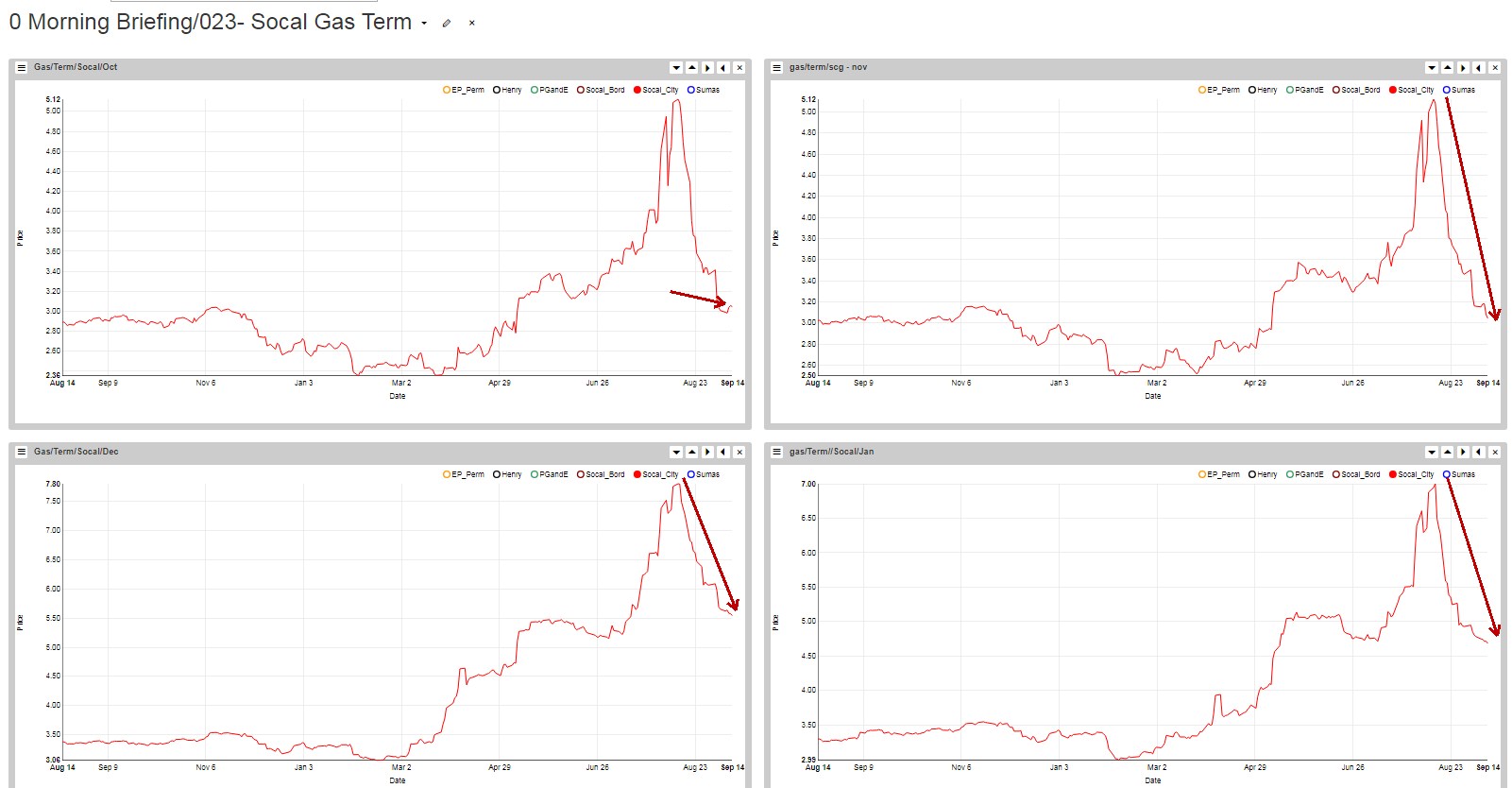 Term gas at Socal continues to melt away; without support from cash, the silly premiums look even sillier. Without that late-season heat, those premiums will continue to wither on the vine.

Storage doesn’t support significant Socal premiums, either; there is 19 bcf more in the ground today than last year. Just the opposite at NP, PG&E is 15 bcf “behind.” You couldn’t tell by looking at the spread. 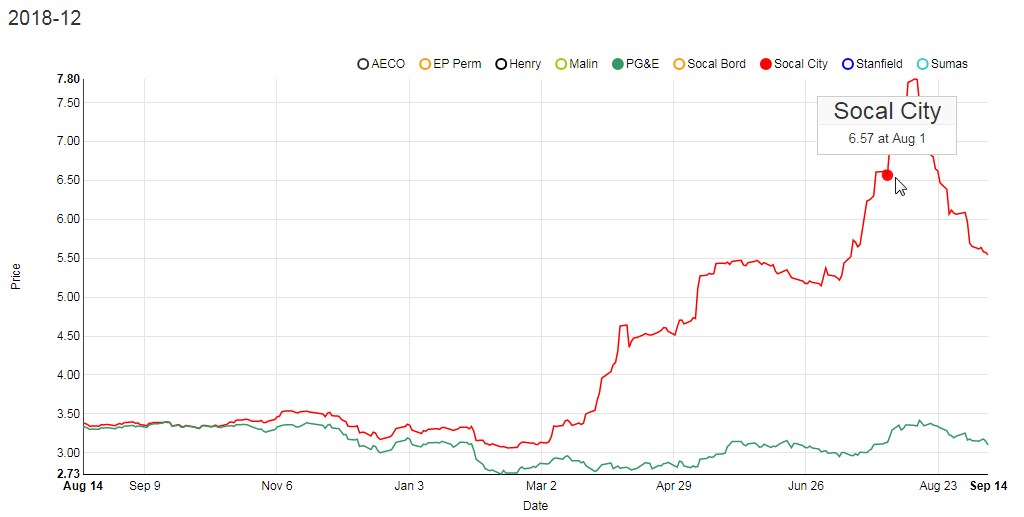 In the old world, PG&E would be trading $0.50 over – maybe that world will return? 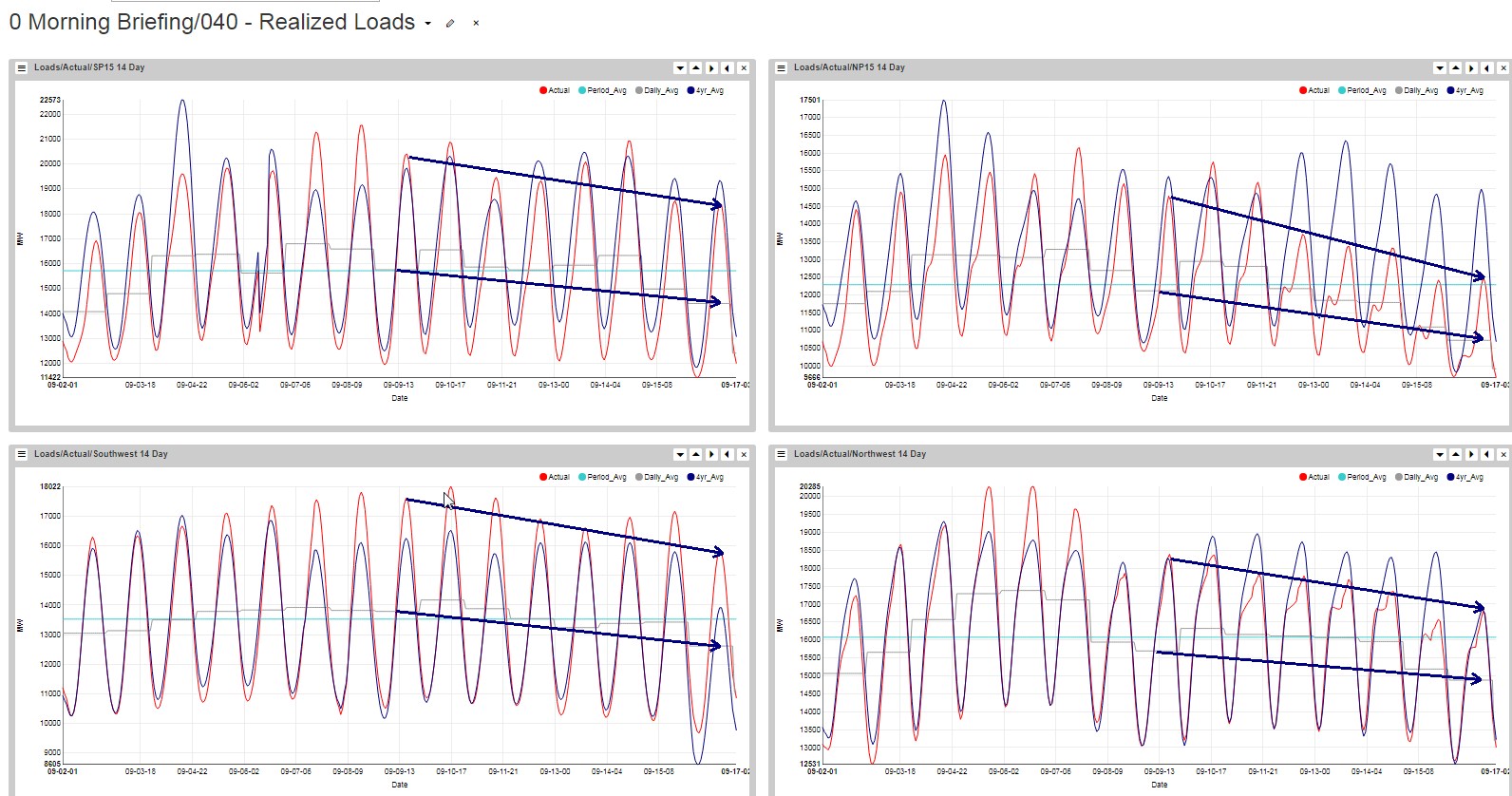 It will return sooner as long as SP loads continue to crater; but it isn’t just SP that is seeing demand fall, every hub is off, week-on-week. 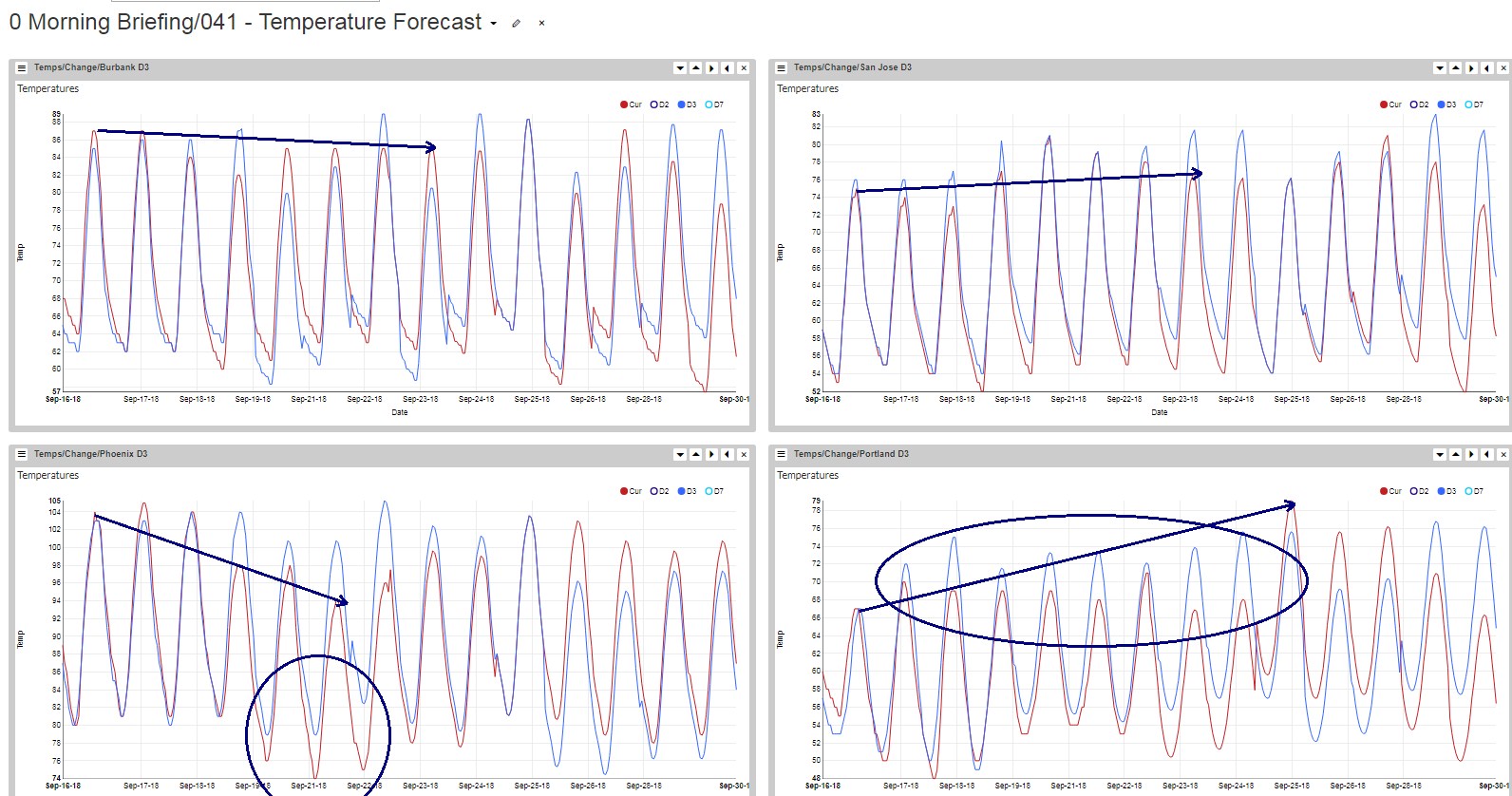 Nothing in the next ten days suggest anything different; temperatures are either sideways or falling. Check out Phoenix, that city drops over ten degrees next week. Portland stages a headfake rally; at best those warmer days eliminate what little heating load the City of Roses was enjoying. 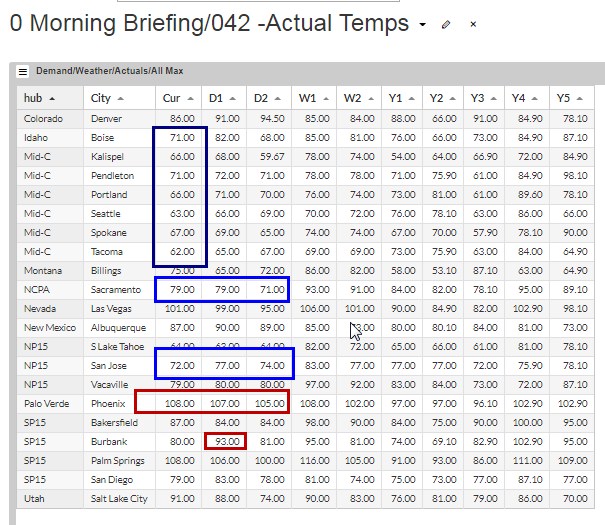 The Northwest load centers are now all in the 60s; NP’s cities are in the 70s, and Burbank clings to the low 80s. Summer over? 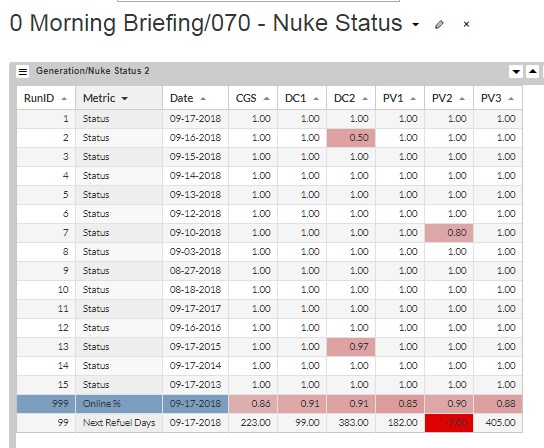 Diable #2 burped over the weekend; we think PV#2 is due for a refuel any day now; maybe AZPS is waiting for those 90s? 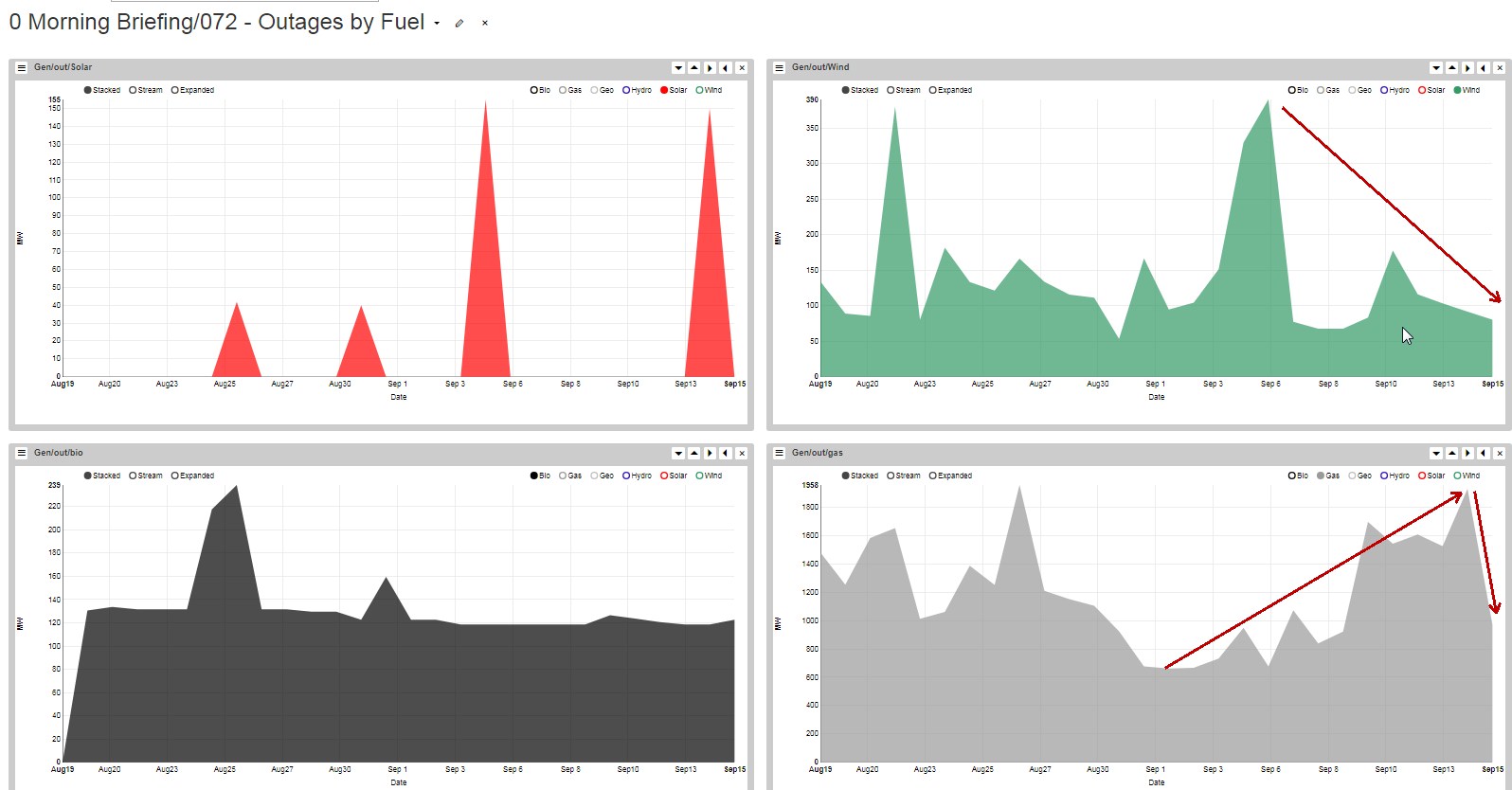 150 MWs of solar is offline, and some new gas units tripped. Below are the units.

Outage season is approaching, with cooling weather that may accelerate. 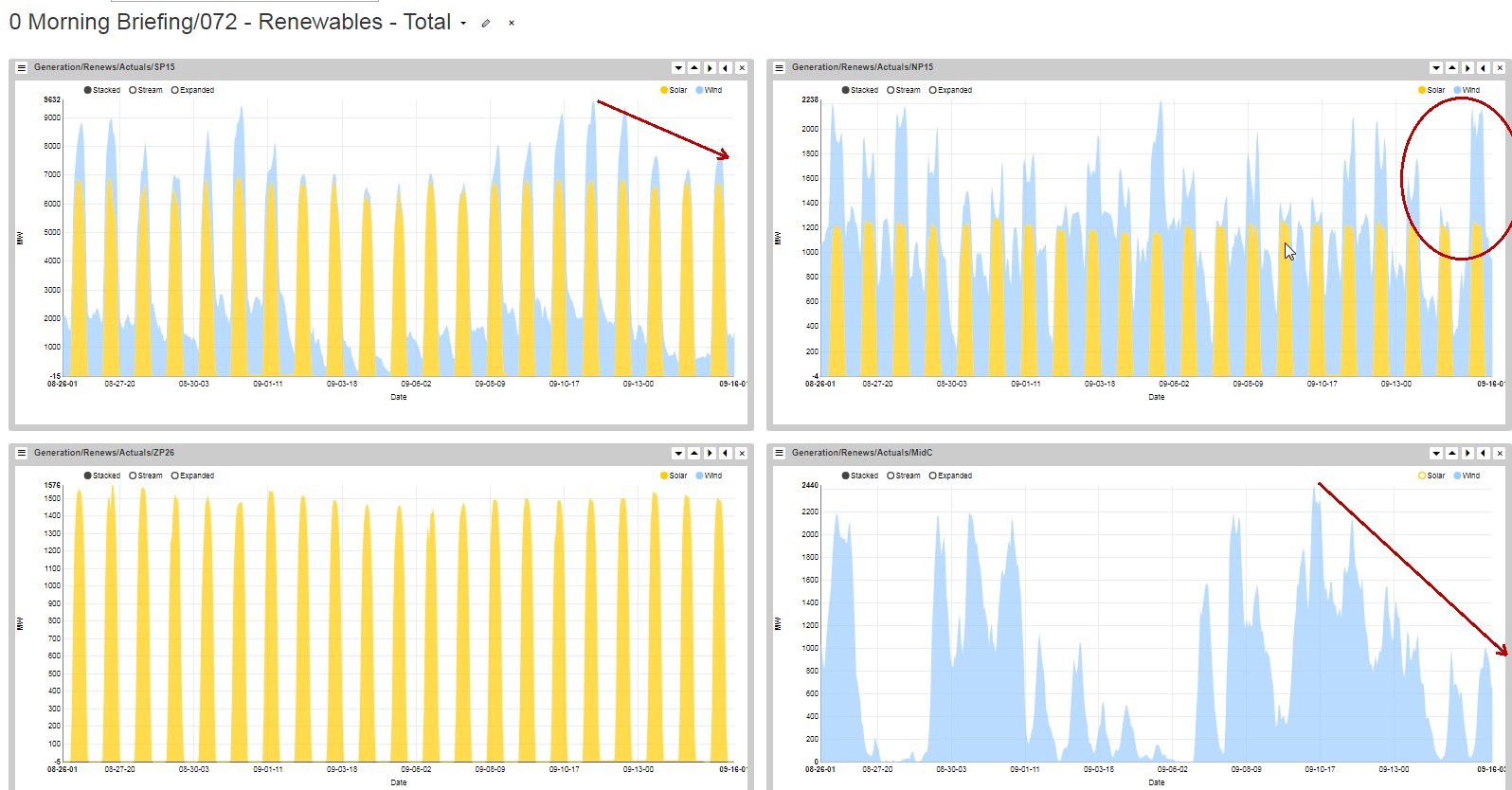 The Northwest lost a few gigs of wind, NP found some and set a two-week renewable high.

Looks wet at a glance, but it isn’t wet. The production centers aren’t getting more than a tenth of an inch in a day. Wet is a place called the “Carolinas”; there they reach 30 inches in a day. Here, we moan over our 0.10 inch. 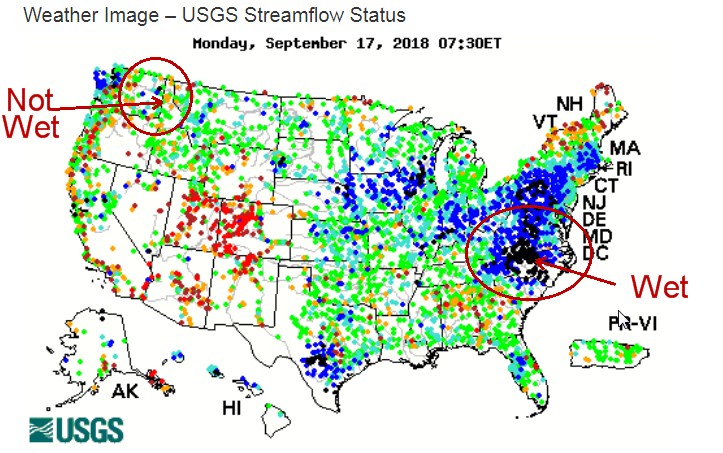 The cuts at Arrow continue while total flows on the US|Canadian border are well below average.

Perhaps one reason is flows above Coulee (not Canada) are mostly up; not a lot, but up off of recent rains. Goes to show, not all of that rain is going into the ground and speaks to what to expect when Kalispell gets an inch.

Cuts in Canada, rallies in the US, all are a wash at Coulee; flows are unchanged, and the reservoir is precisely where it has been over the last twenty years.

Another sampling of Northwest rivers, these are all below Coulee, and most are down from earlier last week.

These are Snake River side flows; not highly relevant as far as MidC price, at least not today, but they also speak to the elasticity of streamflow in September. 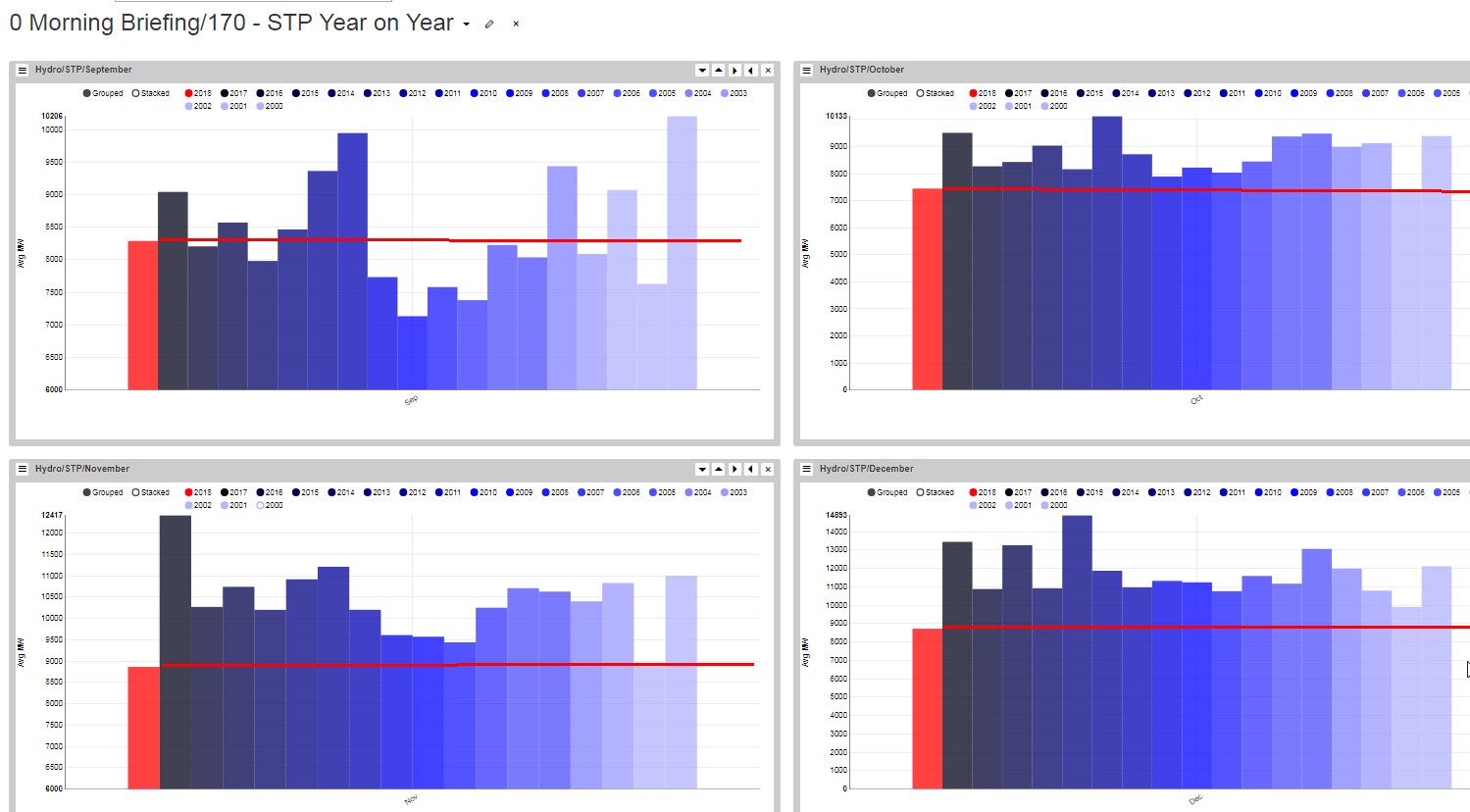 Today is Monday, that means STP this afternoon. November received an NWRFC pardon last week; the folks in Portland padded another 800 aMW to that battered bullet. It looks like Dec needs some love too, they have it at the lowest in twenty years. I can see predicting major anomalies in BOM or even Oct, but not that far out. One big storm and Dec could set twenty year highs. 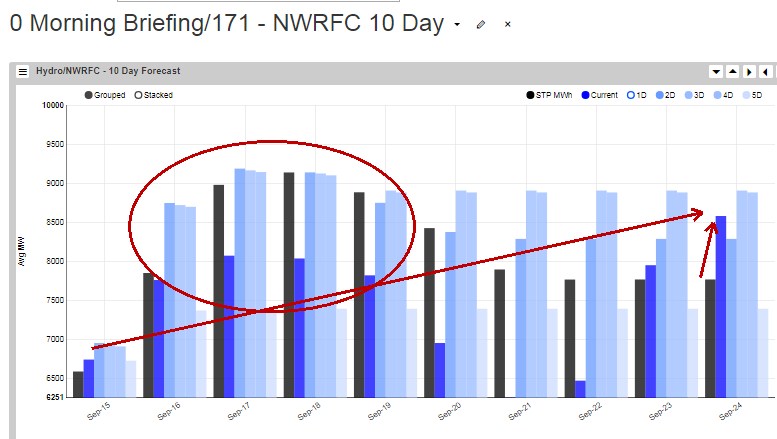 The 10 Day Tells are leaning more towards BOM cuts, though the last day suggests a BOM build. 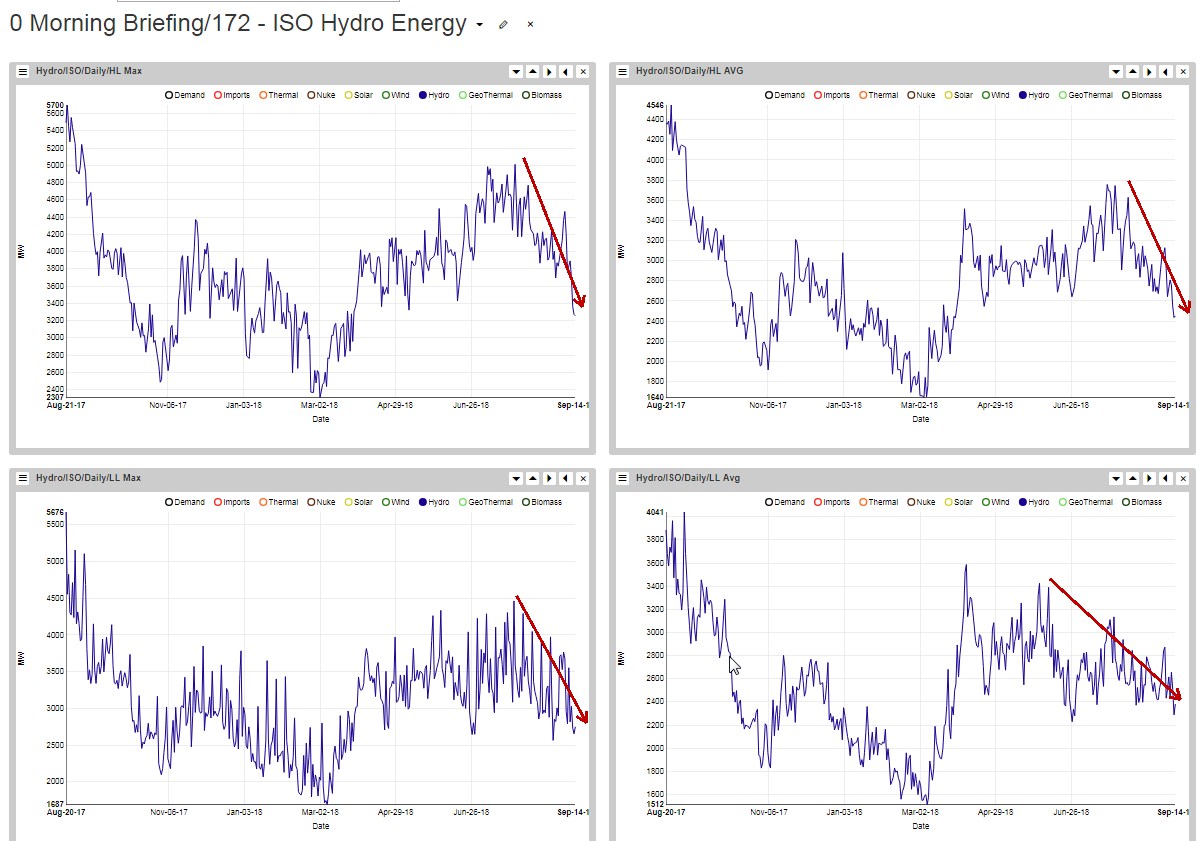 We haven’t posted these plots for a while, the ISO Hydro Energy by HourType. All are down; Max and Average, On-Peak and Off-Peak. Not a big surprise, the ISO doesn’t need the energy, and the state needs the water. 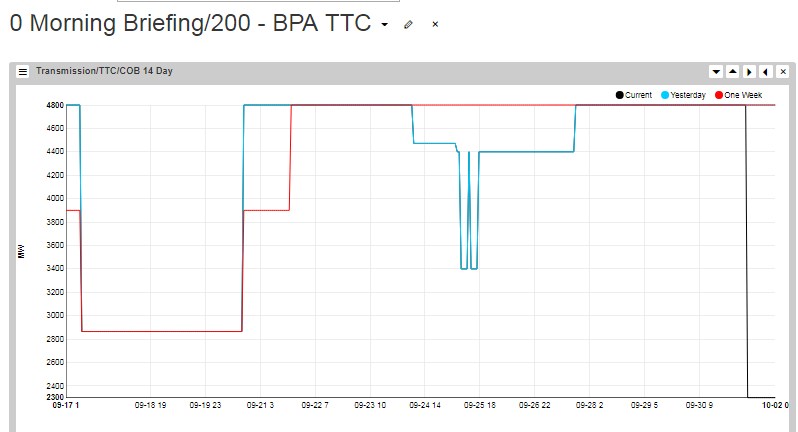 The Northern Intertie flipped, energy flowed south over the weekend. Strange, because a few hours yesterday the COB and NOB set season lows.

It’s too early for winter, there are no heating degree days out there, and yet late-season heat is nowhere in sight. Term markets continue cratering but will find a bottom which suggests a long book may not be a bad place right now.