More of the same, weather cooling down in the Northwest and staying unseasonably hot in the Southwest while all of the west remains dry. 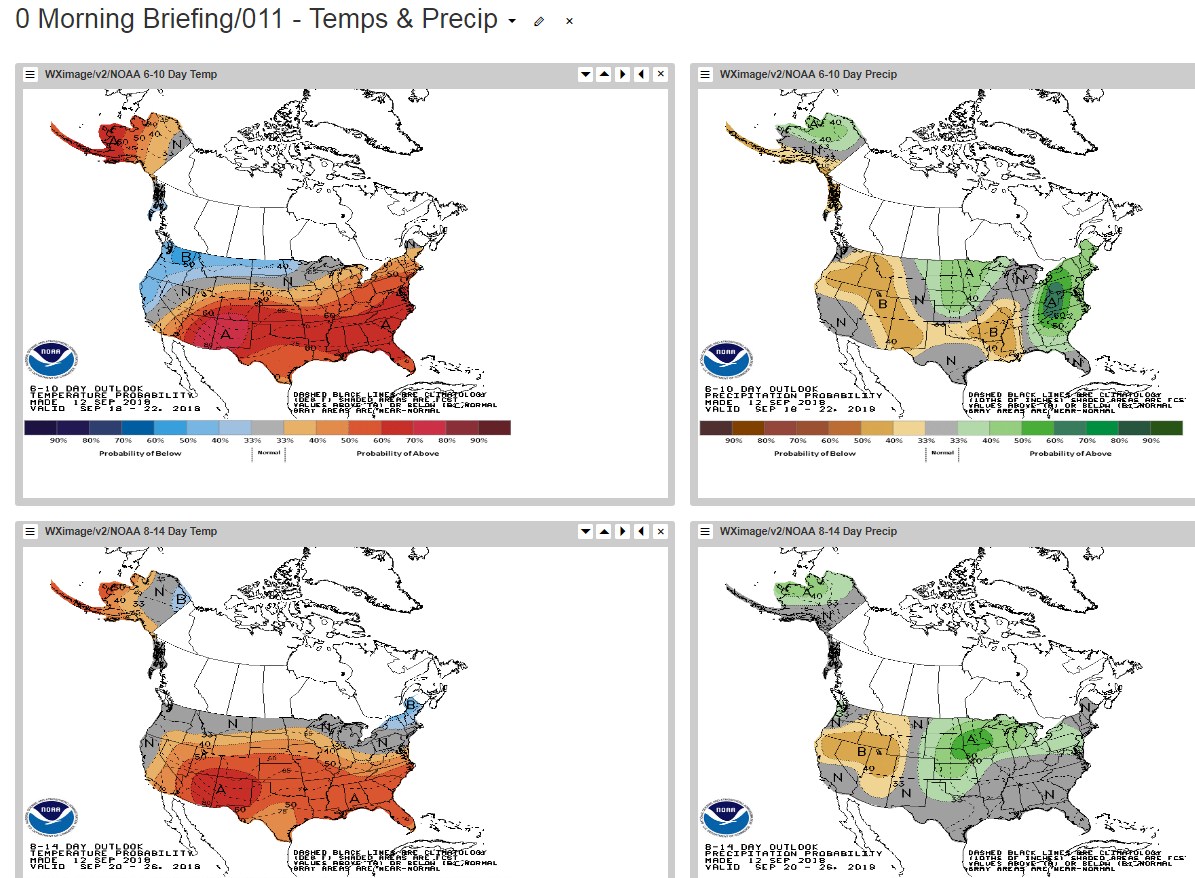 The above dashboard is NOAA’s outlook starting on Day 6, before that the Northwest will get a spattering of rain:

Nothing that will make much of a difference, maybe a few hundred MW west-side rally, but zero impact where the production resides. Term markets, led by BOM, continue their slide. 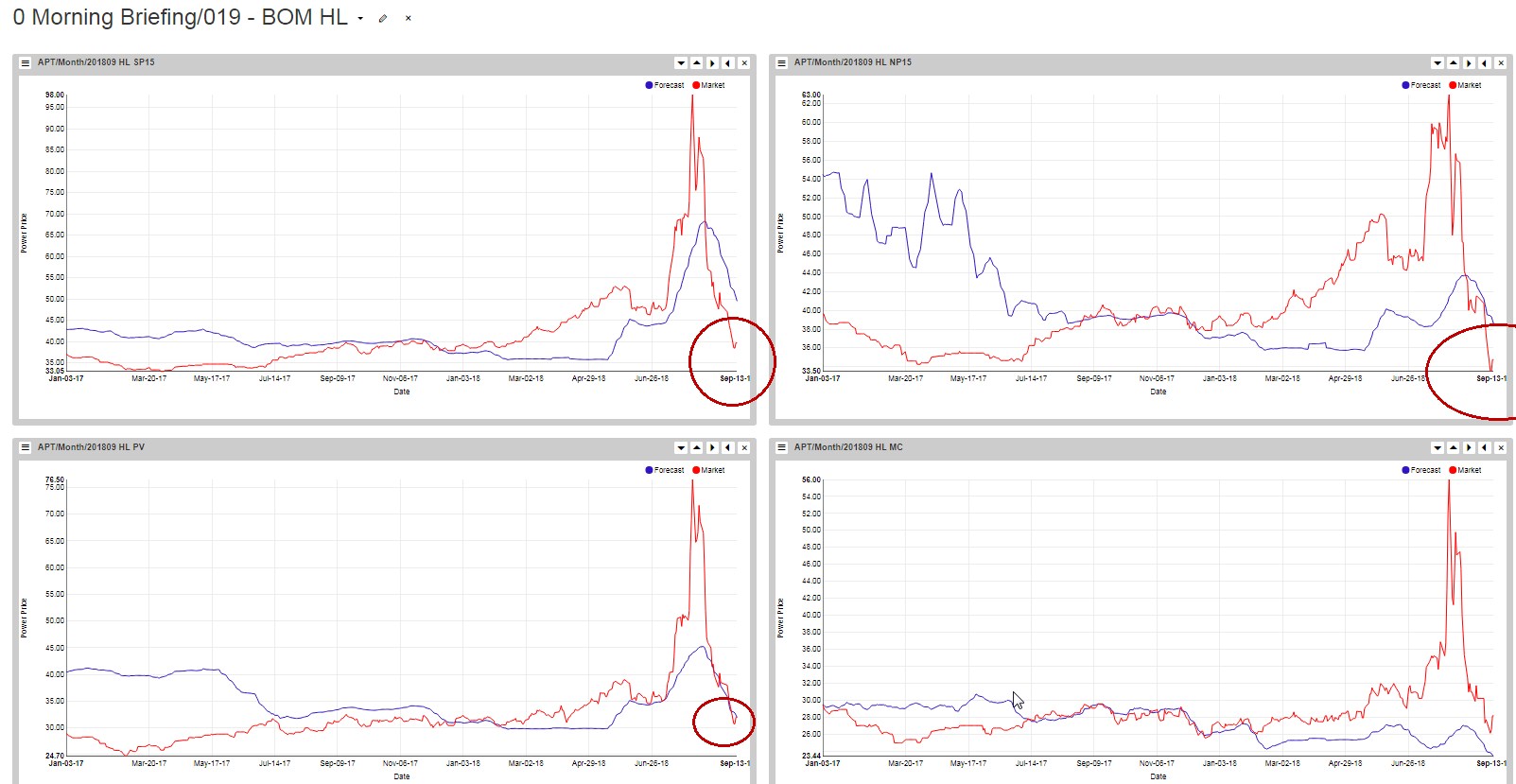 The ISO contracts are low; the NP is at a contract low price-wise, and Palo and MidC are approaching the same. Surprising at Palo, given that its temperatures have been well-above normal but goes to show its all about SP15; if the mother ship crashes so do all her wards. 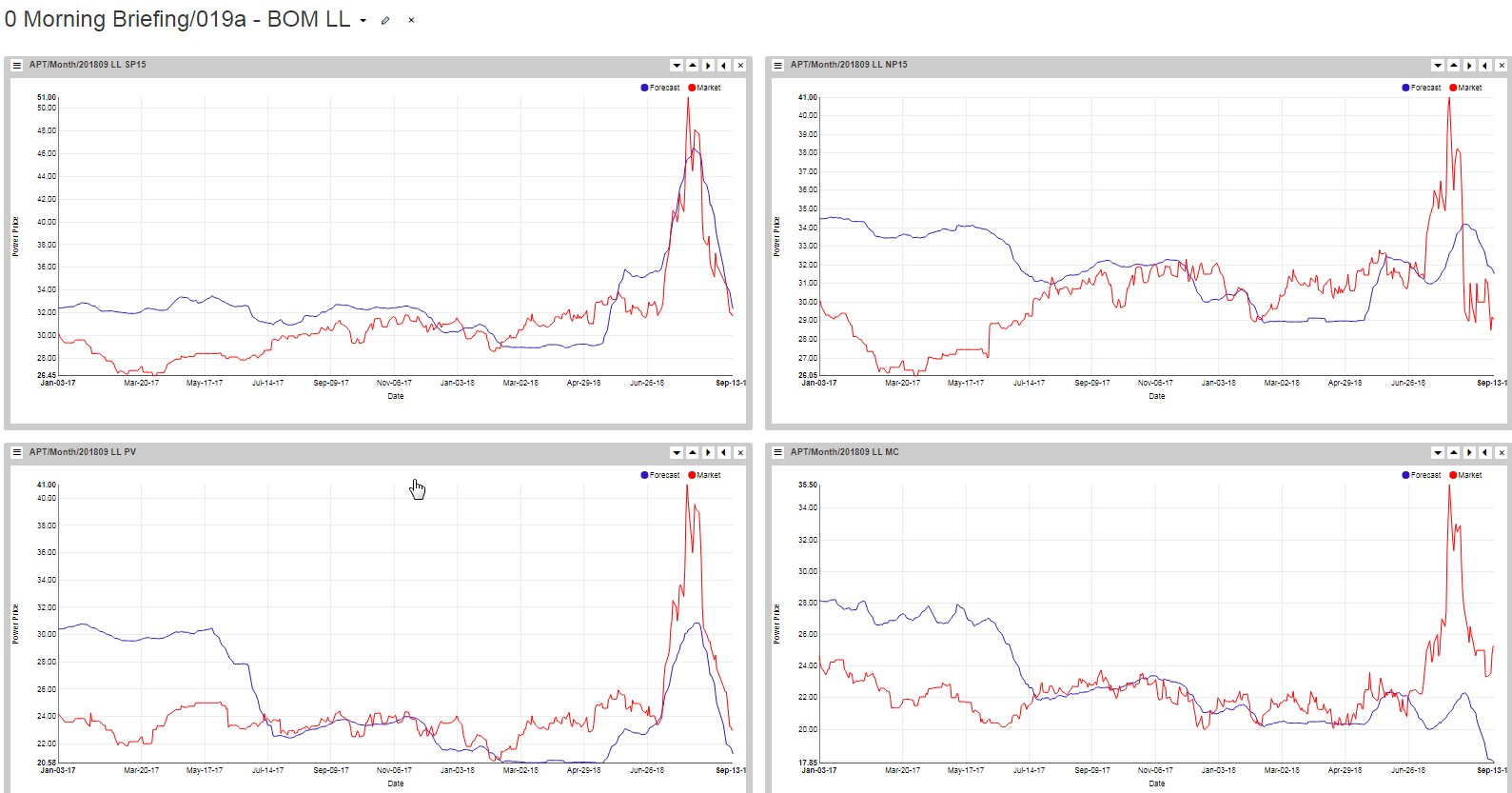 Off Peak is a similar story, perhaps less dramatic. All both dashboards say is how poorly the market traded during the late-July early-August period. Mostly, you can blame liquidity; there isn’t enough depth to stop these rabid moves. No big daddy left in the market to stand in there and sell into the rally. Instead, the market gaps up $50 on about 200 MWs and guess who pays? The Ratepayer, of course. And who is to blame? The  FERC and other paranoiacs who don’t understand trading.

Noone talks about term markets anymore; go to a conference and everyone is drooling over the EIM -a five-minute market. Why? Because you can’t lose much money in five minutes, its safe and predictable, meanwhile the 1000s of open term MWs are left unhedged to be ultimately covered in real-time. 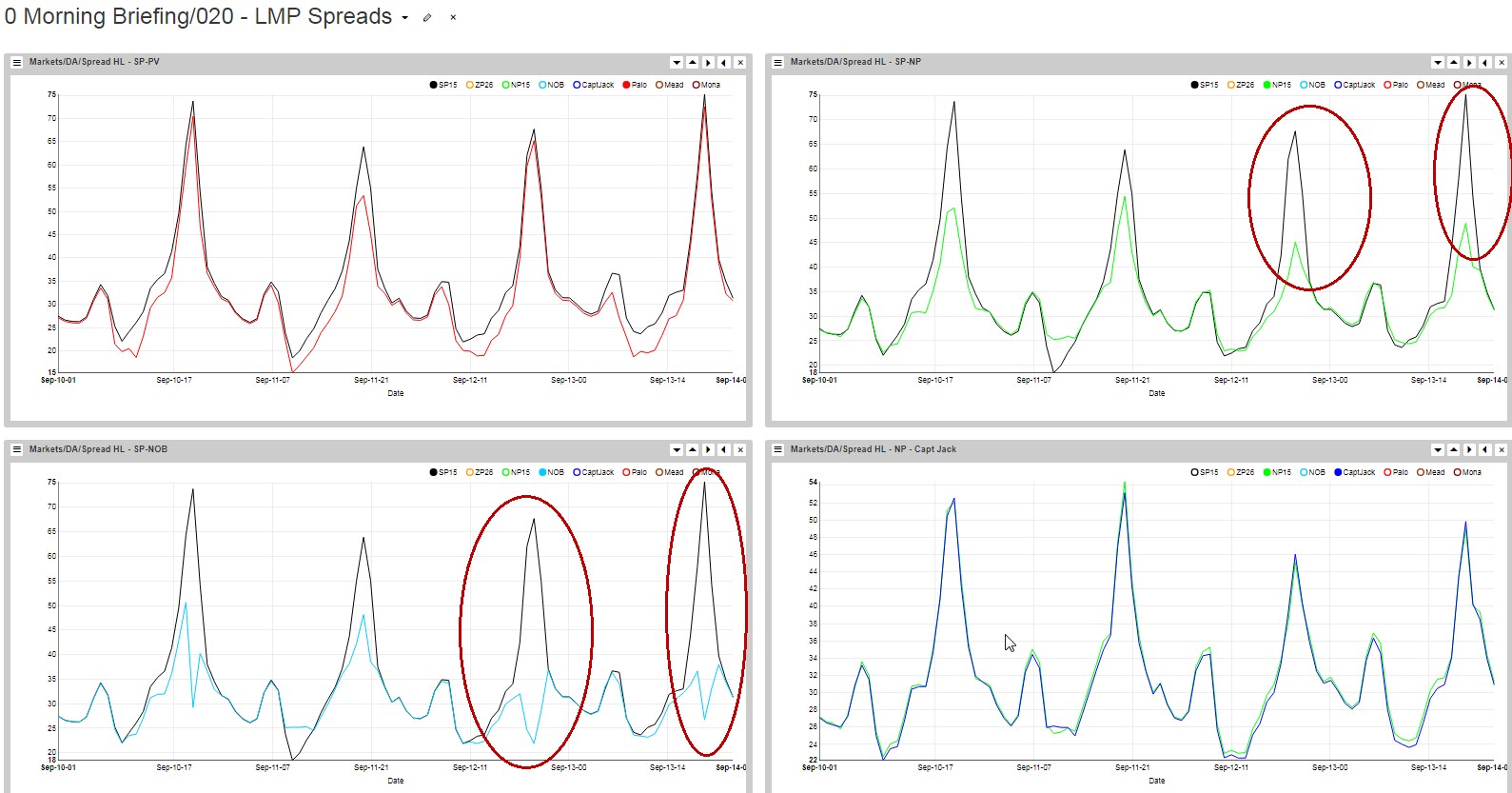 LMP spreads are tight at SP-PV because PV still has strong summer loads; the spreads blow out between SP and NP and SP and NOB. The NP-COB spreads remain tight, in fact, most hours the COB line is not full. You’d think the spread would trade at losses, but it just trades flat. 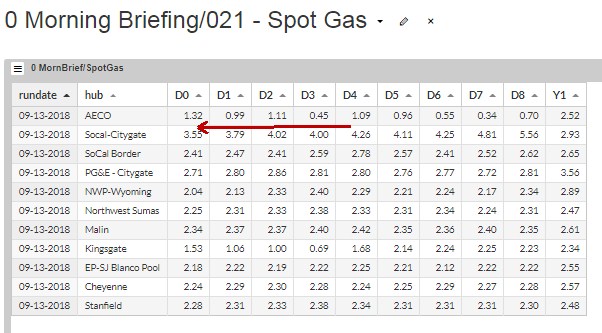 Socal Citygate spot continues to melt back to reality; now she’s back to a three handle, something we haven’t seen since June. Not surprised, the hub is sitting on 20 bcf more gas today than the same day last year. Yet, Socal still commands a premium over PG&E even though the latter is 15 bcf behind last year. I guess the fear of running out of winter gas lingers. 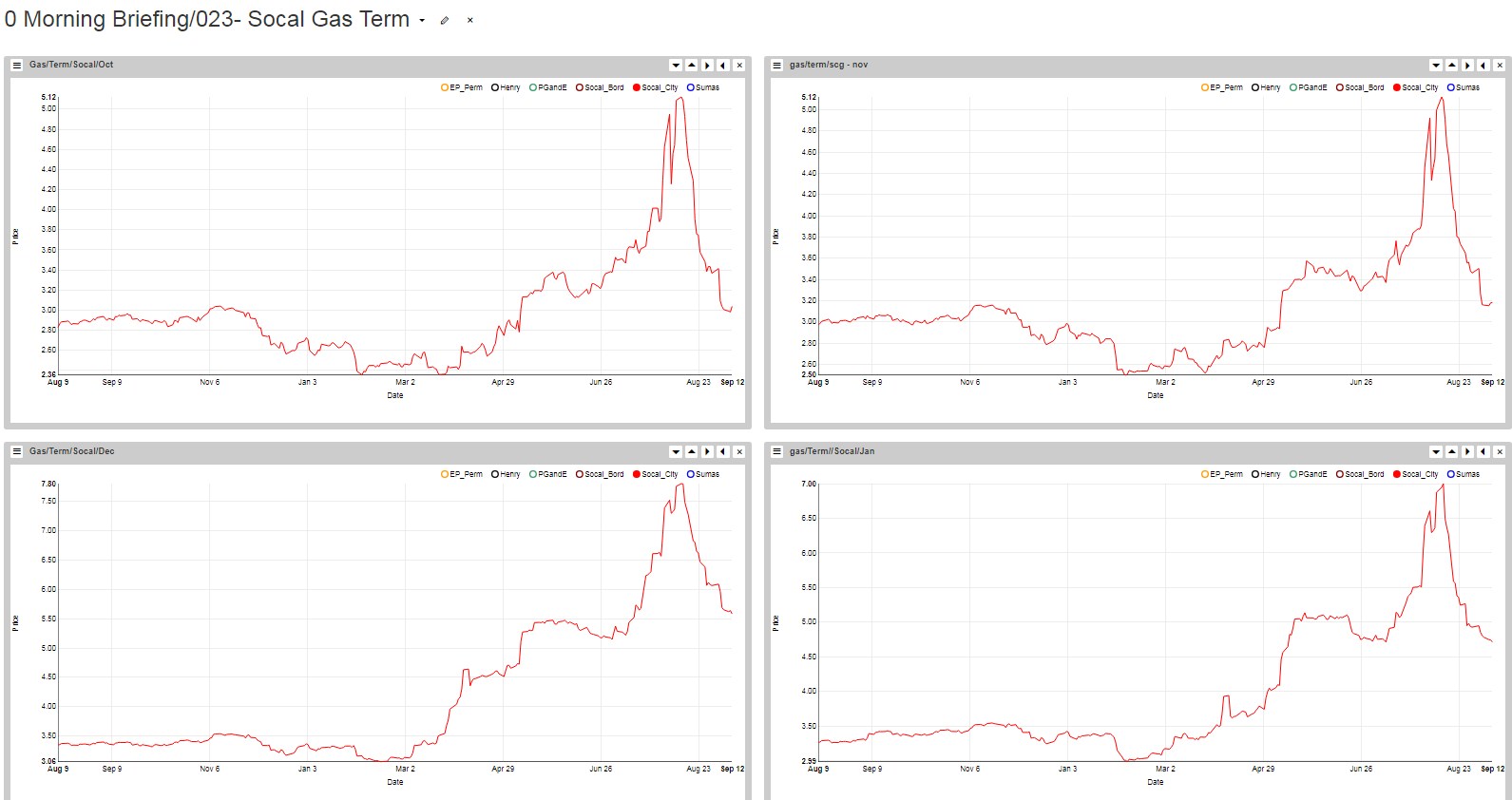 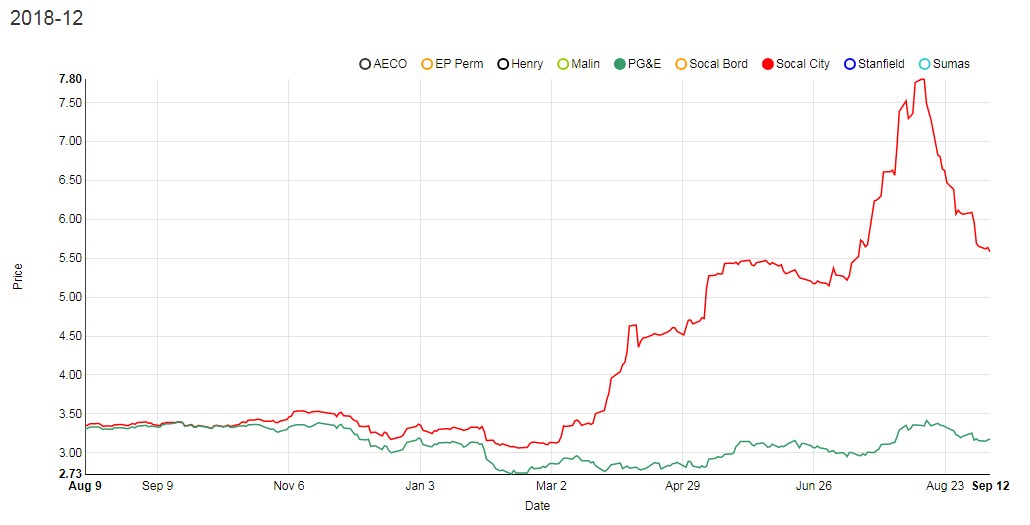 If I were to guess, I’d say Socal has an embedded twenty-degree cold anomaly within that price. That is about how cold every day between Nov 1 and Dec 31 would need to be to support those prices. Does anyone want to take that bet? Obviously not, given the current market price. Remember, this is Dec and will quit trading around Thanksgiving. Its price will be a function of November cash as much as where Dec spot clears.

How cold does Novy get? or Dec? 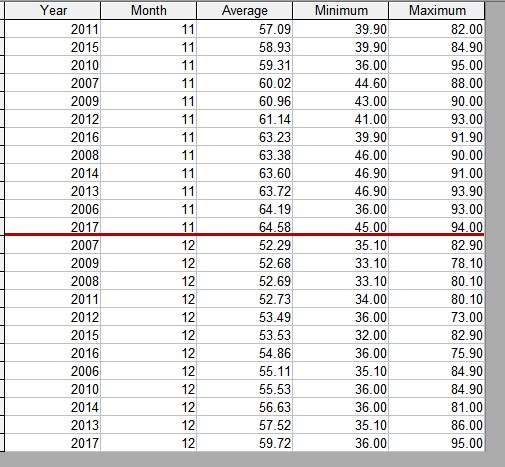 Just for fun, we computed the Average, Minimum, and Maximum temperatures at Burbank for Nov and Dec over the last twelve years. Burbank has a better shot at heat than cold in November, the coldest it ever got (on any hour) was 39, and that was in 2011 and 2015; last year it hit 45 for a single hour.

December is chillier, about five degrees on average, but still, the odds of extreme cold are less than Trump resigning.

In fact, there is less than a 1% chance of seeing any hour colder than 36 degrees; 97% of all December hours were warmer than 40 degrees (last twelve years). The odds of extreme LA cold are even lower if you throw out the years 2006-2010, given the warming trends of late. The point is, Dec is over-priced, still. 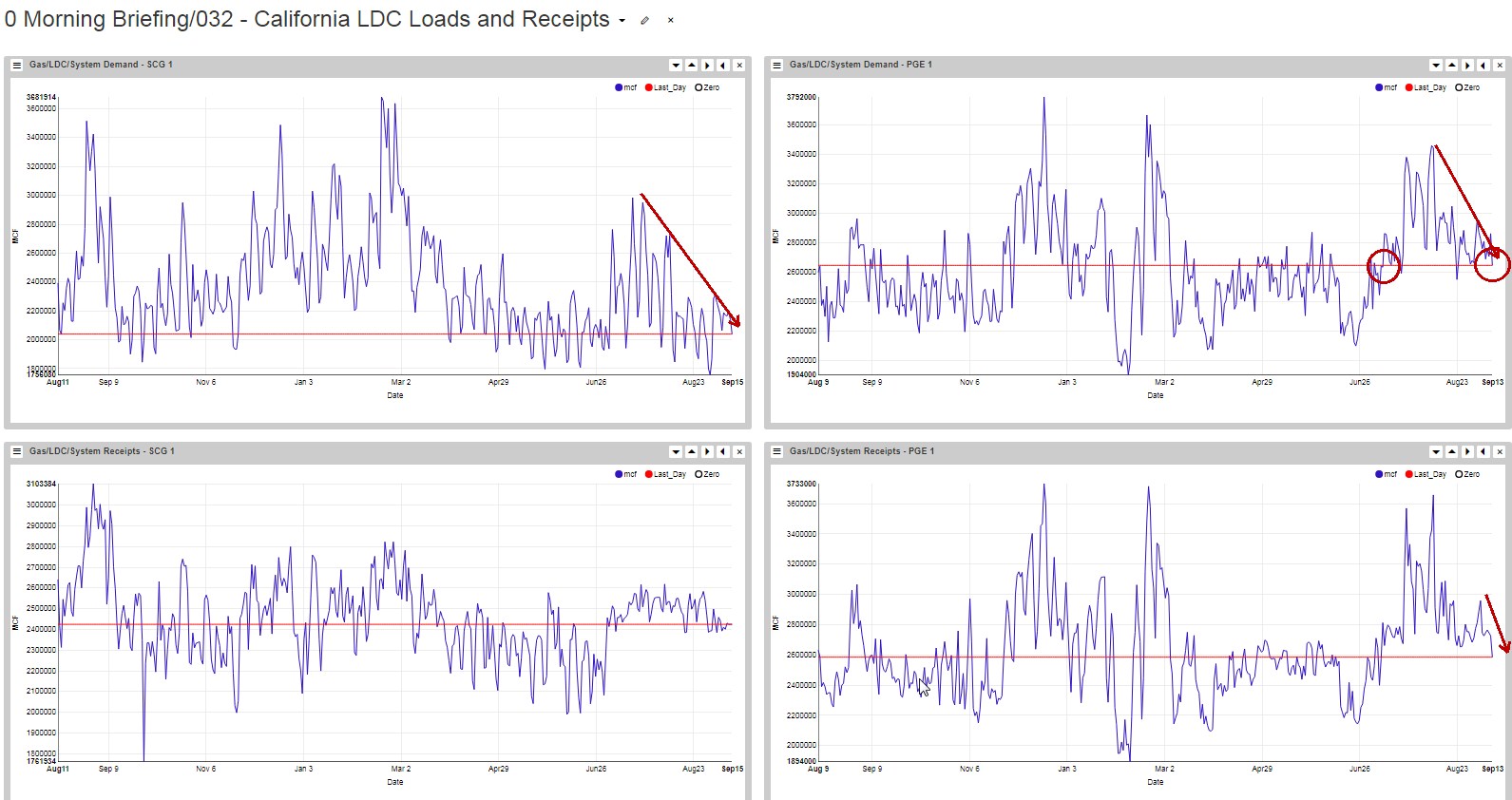 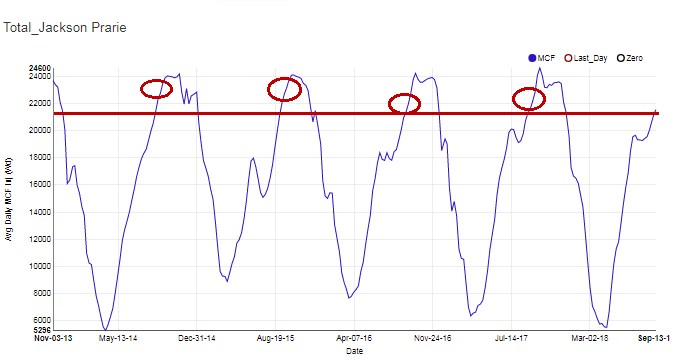 The above plots daily totals for Jackson Prairie; we were curious to see how far behind the Northwest fell because of tight water. The circles reflect same day for the previous four years; JP is behind, but not by much and would only take a few weeks of hearty injections to be back on track. 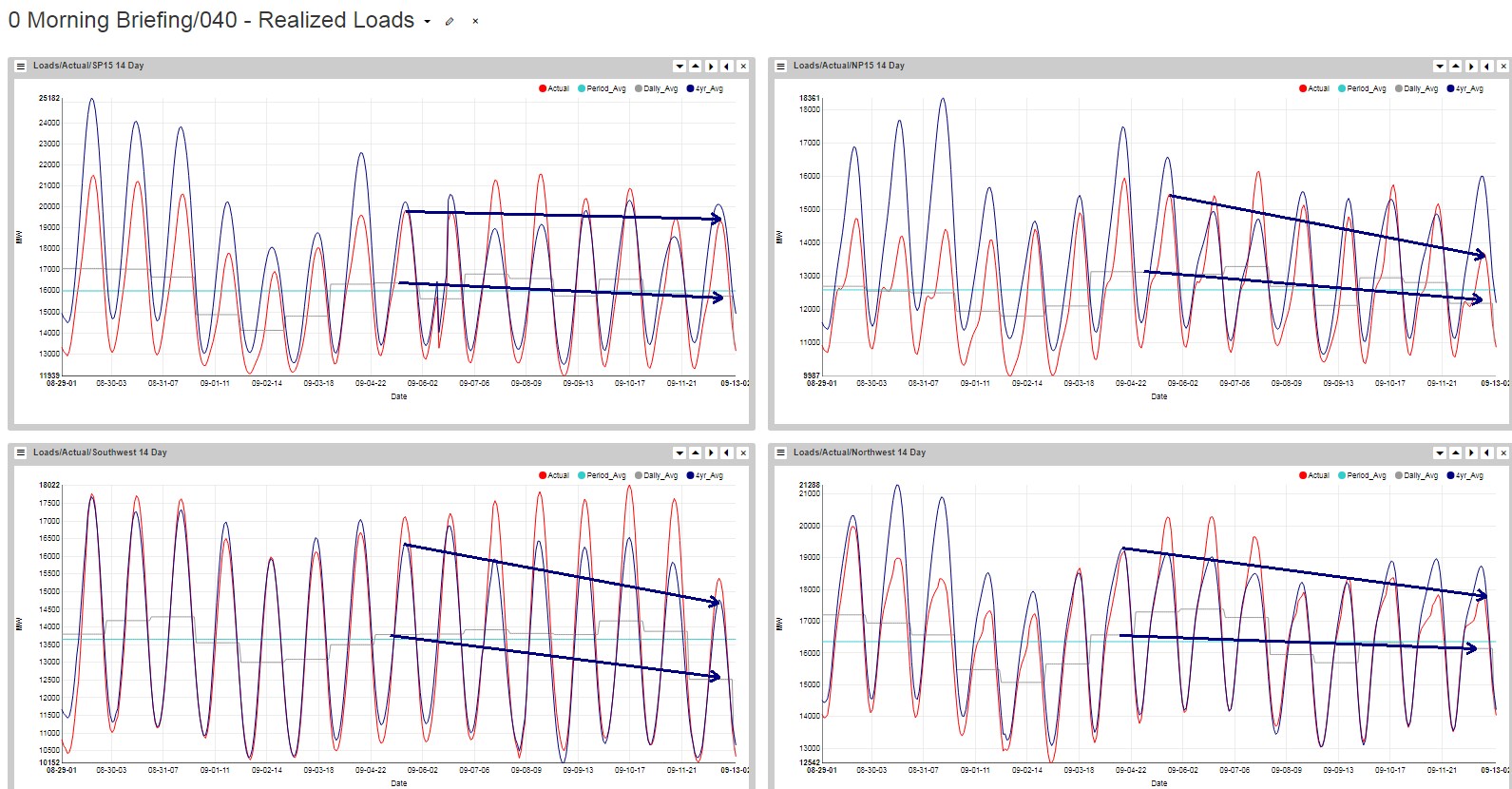 Loads are off, week-on-week, at all four hubs. 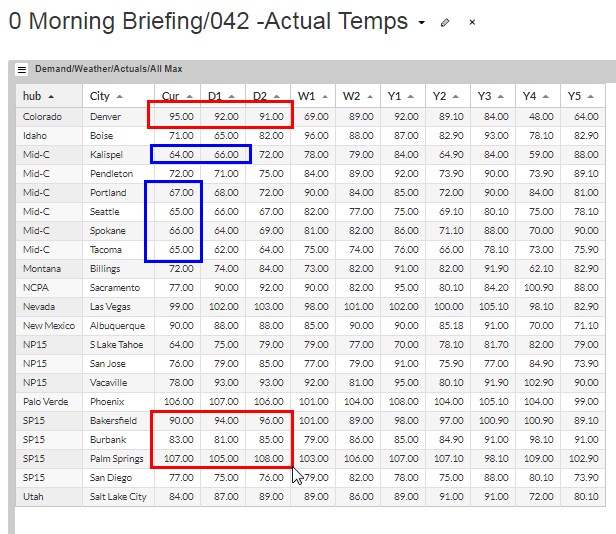 Vegas has now fallen 5-10 degrees behind Phoenix, Burbank has bounced along in the low 80s for a week, and the Northwest is flirting with Heating Degree Days. 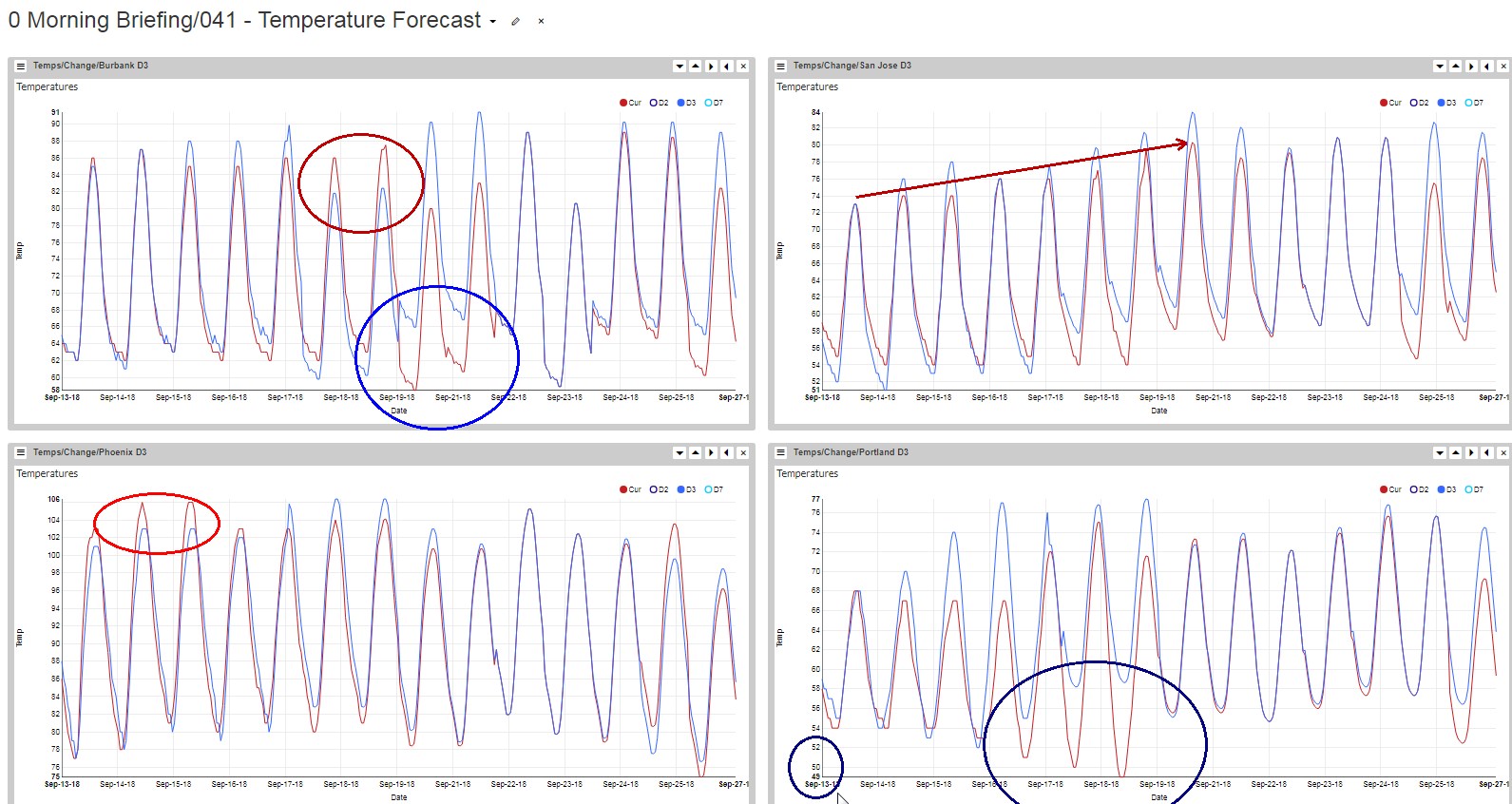 SP’s forecast got a bit warmer in days 5-7; San Jose will see steadily warmer weather, but nothing hot and the Northern portion of the state will stay bearish. Phoenix remains hot, but its price can’t rally because of that bearish ISO. The Northwest got colder in days 6-8, and many homes will be flipping the thermostats to heat mode. 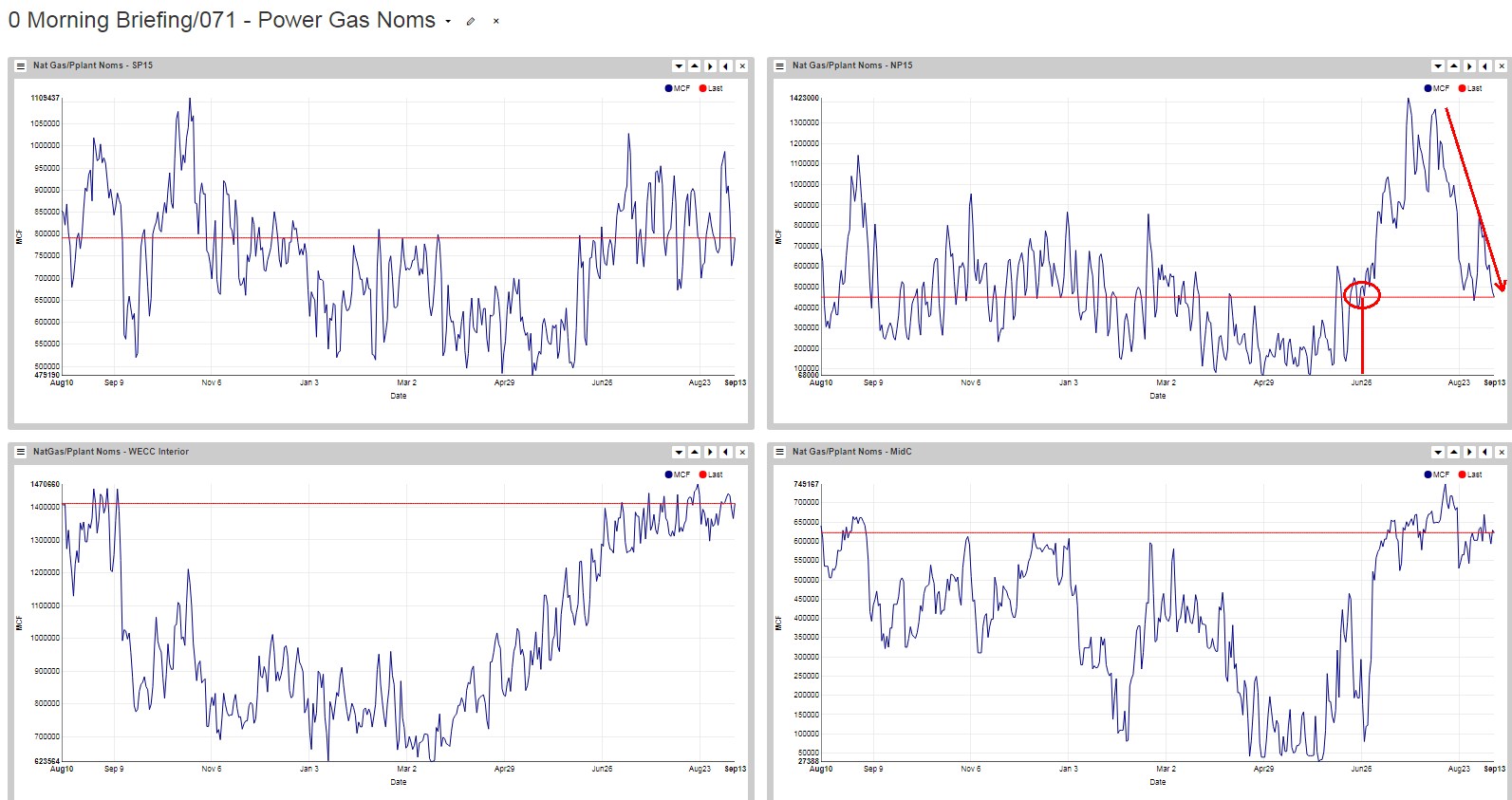 Meanwhile, the Southwest and Northwest continue running most gas turbines; the former because of loads, the latter due to the dearth of water. 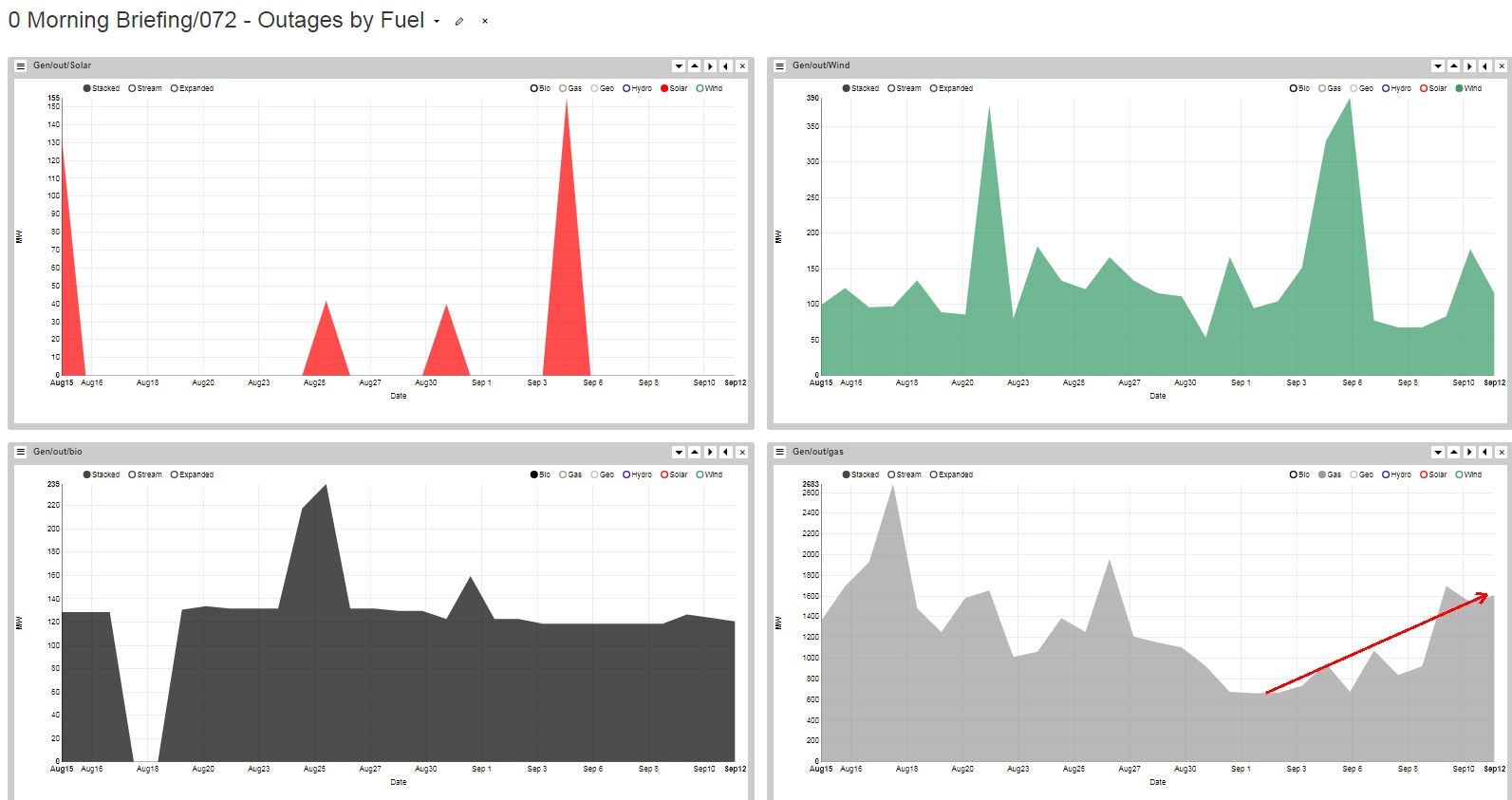 Gas outages rallied, let’s see which ones are off:

It looks like the entire Encina project is offline as of a few days ago. Seems too early for planned maintenance and odd that the whole complex is down. 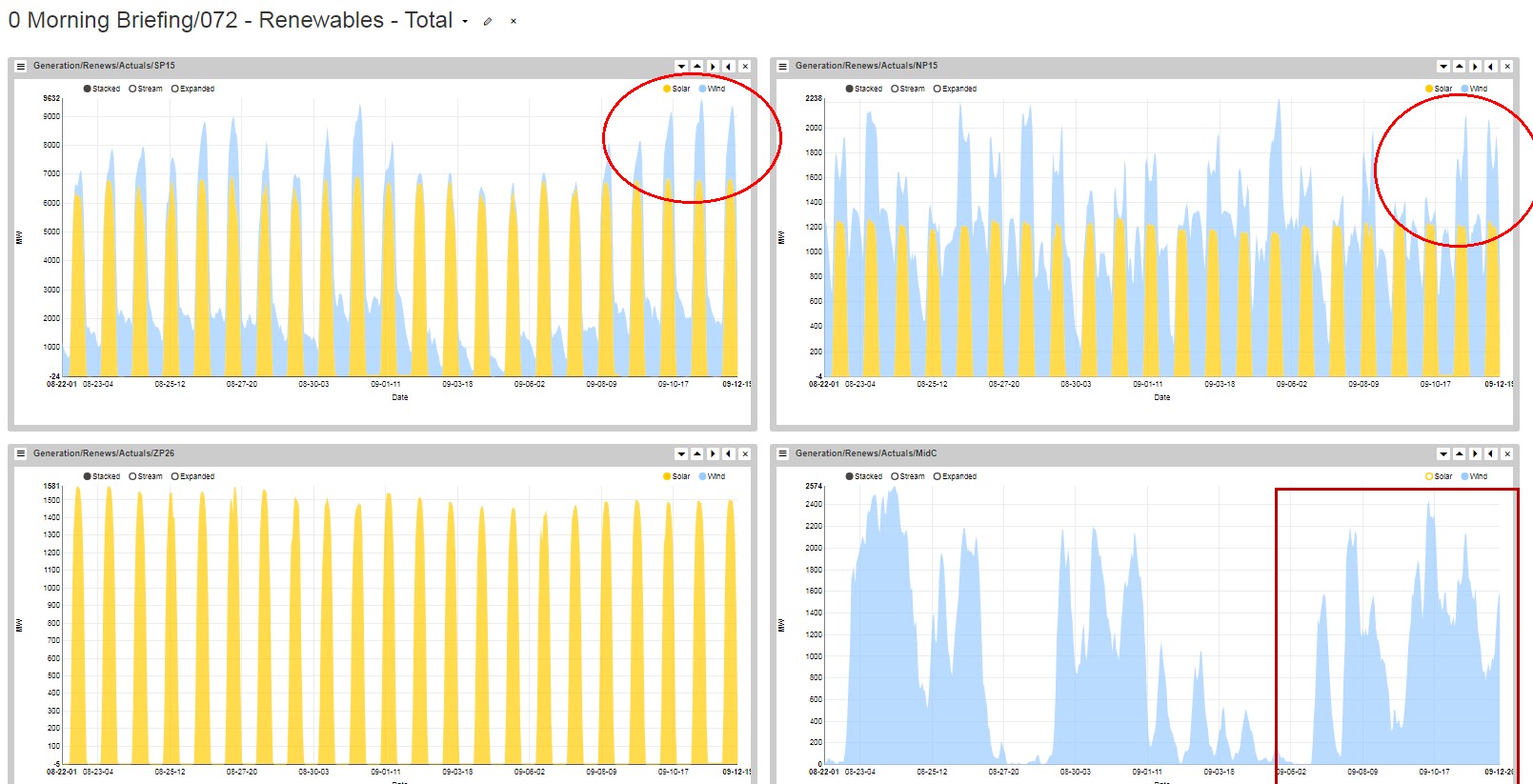 The ISO saw surges in wind energy coincidental to peak solar. The Northwest saw a massive and steady block of wind energy over the last couple of days.

Arrow remains cut which is driving flows at the Border to set seasonal lows. Fortunately, the wind is blowing south of the border, and BPA doesn’t need the water. 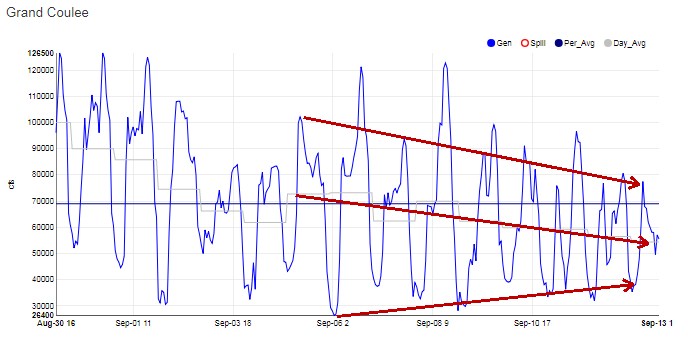 Coulee remains castrated by a lack of inflows and BPA’s desire to maintain the reservoir elevation, all of which has constrained the project’s shaping capacity. Yesterday was the least-shaped day in months. Perhaps that suggests its time to buy the On: Offs? 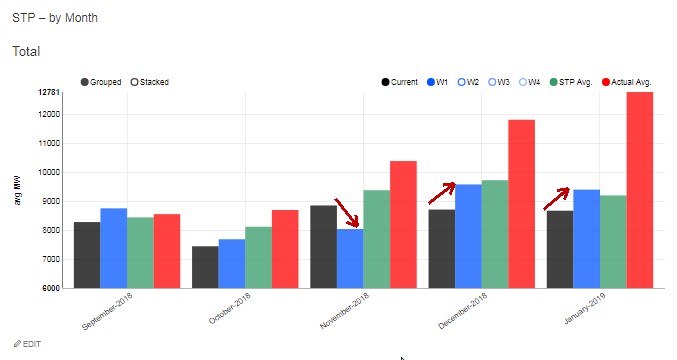 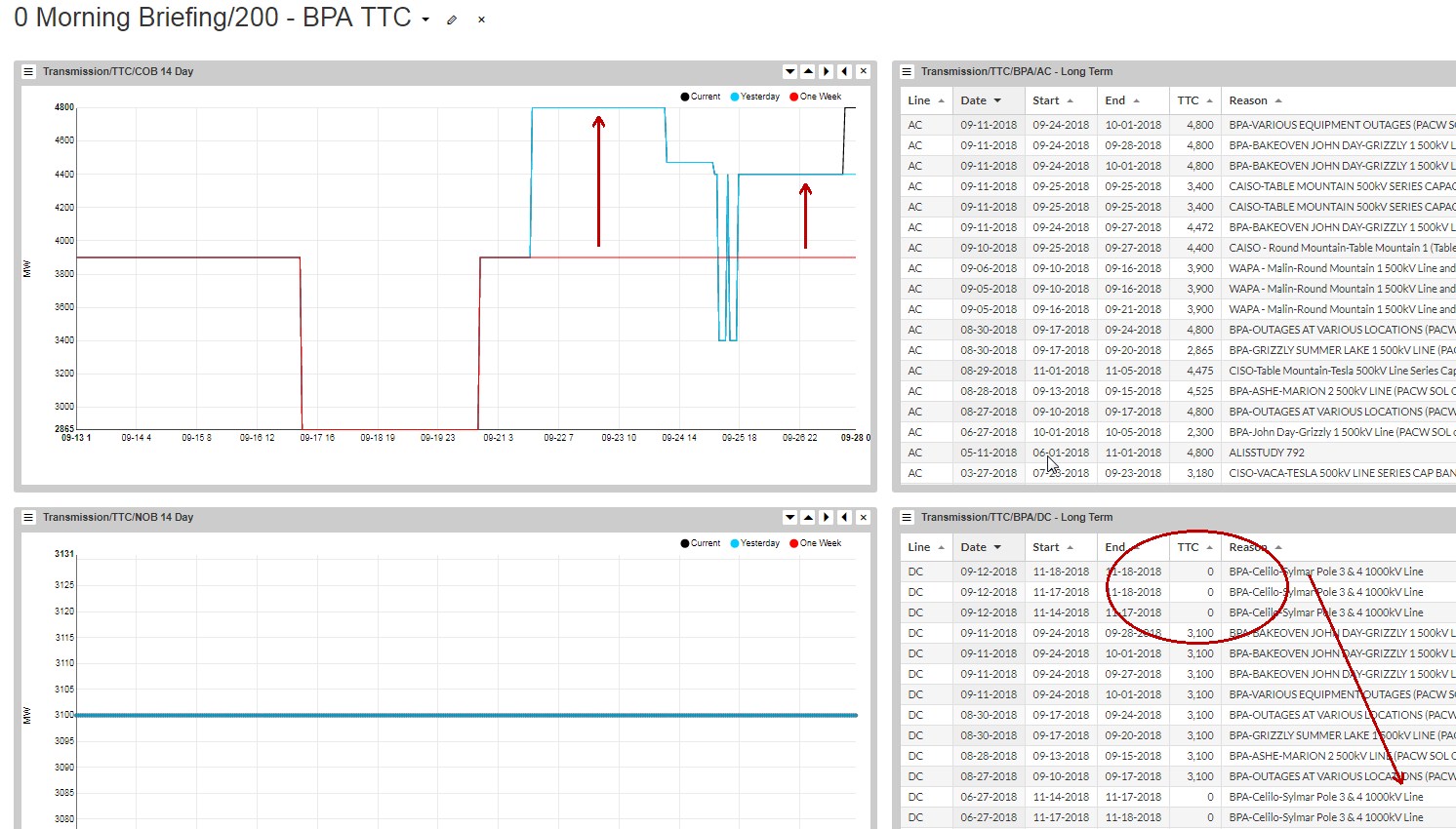 Not sure why BPA published its DC outages yesterday, they are identical to what they released in June. Perhaps just a reminder that the line is going to zero in another month. The AC has uprates in the back of the 21-day forecast.

Flows are net northbound on the Northern Intertie reflecting weak MidC Prices;  same direction for Path 15 and for the same reason; Path 26 flipped, most energy went into SP, and Palo realized its single most significant swing of the season.

It is tempting to go long; we’d be net long, all off of low prices, and hope for Socal heat. The position remains somewhat protected by dry Northwest and all of the WECC is approaching the fall maintenance season.