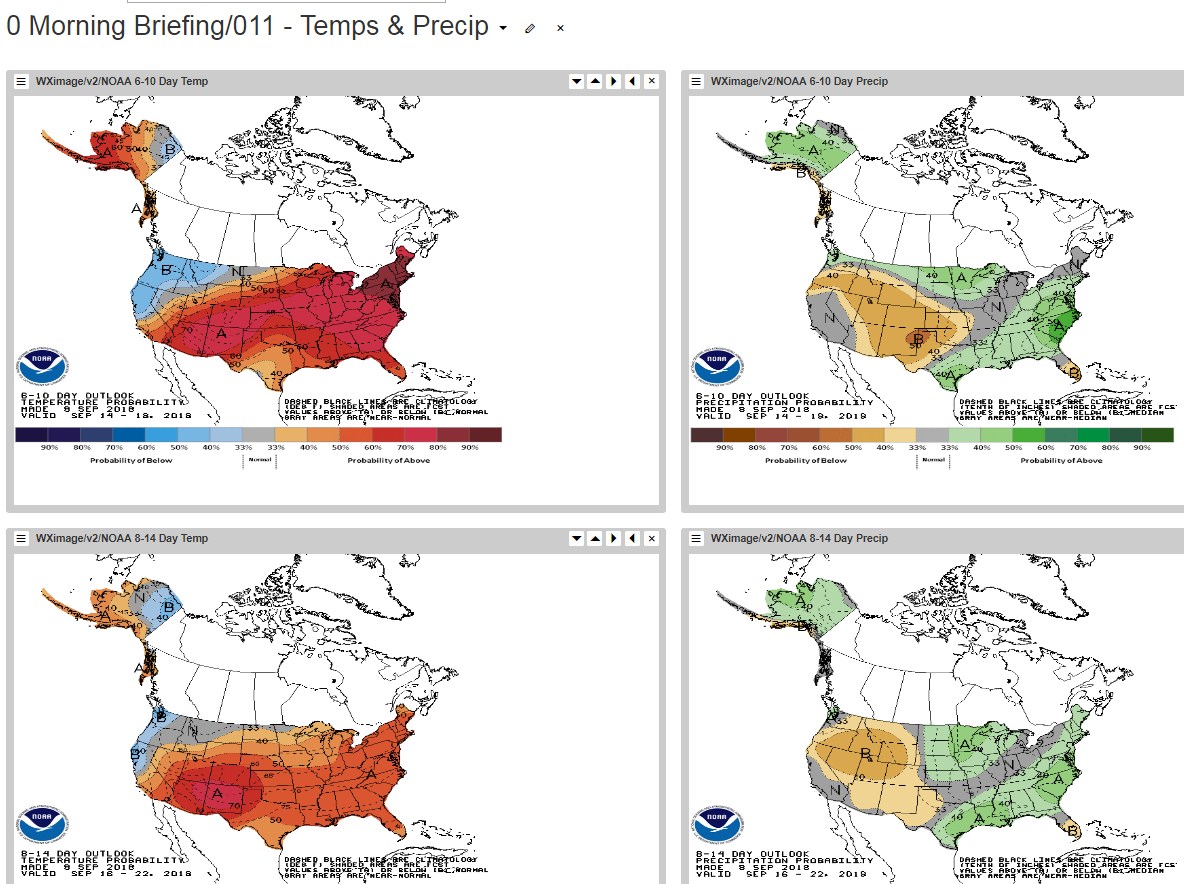 In a word, bearish demand-wise and very slightly bullish hydro-wise. That cold anomaly in the 6-10 day spills deep into California; this will crush ISO demand. The deserts will remain hot, but that’s the only place, aside from New England, where it is roasting. It is that warm weather, held in place by a blocking high, that is pushing Hurricane Florence into the Carolinas. 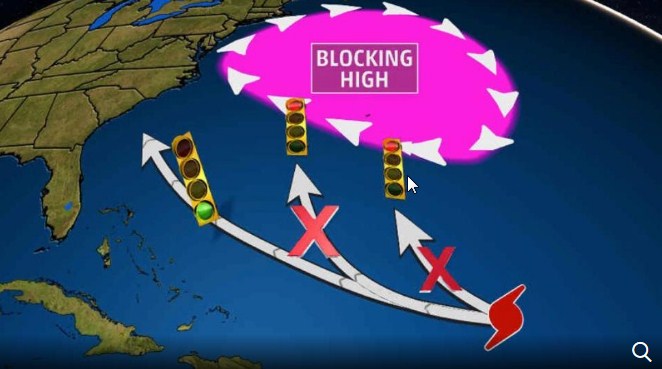 They say no hurricane since 1950 has hit the US from where Florence sits today. Never say never! 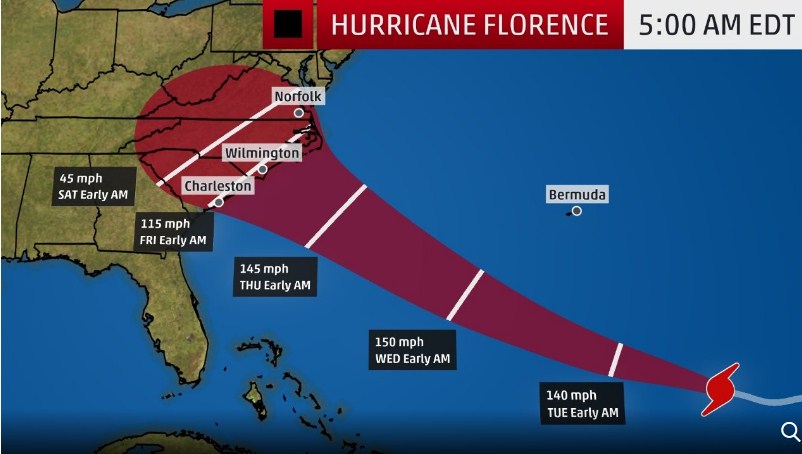 This monster is set to land as a Category 4 and will rain on everyone’s parade.  Speaking of monsters, the WECC genie has been put back into the bottle. 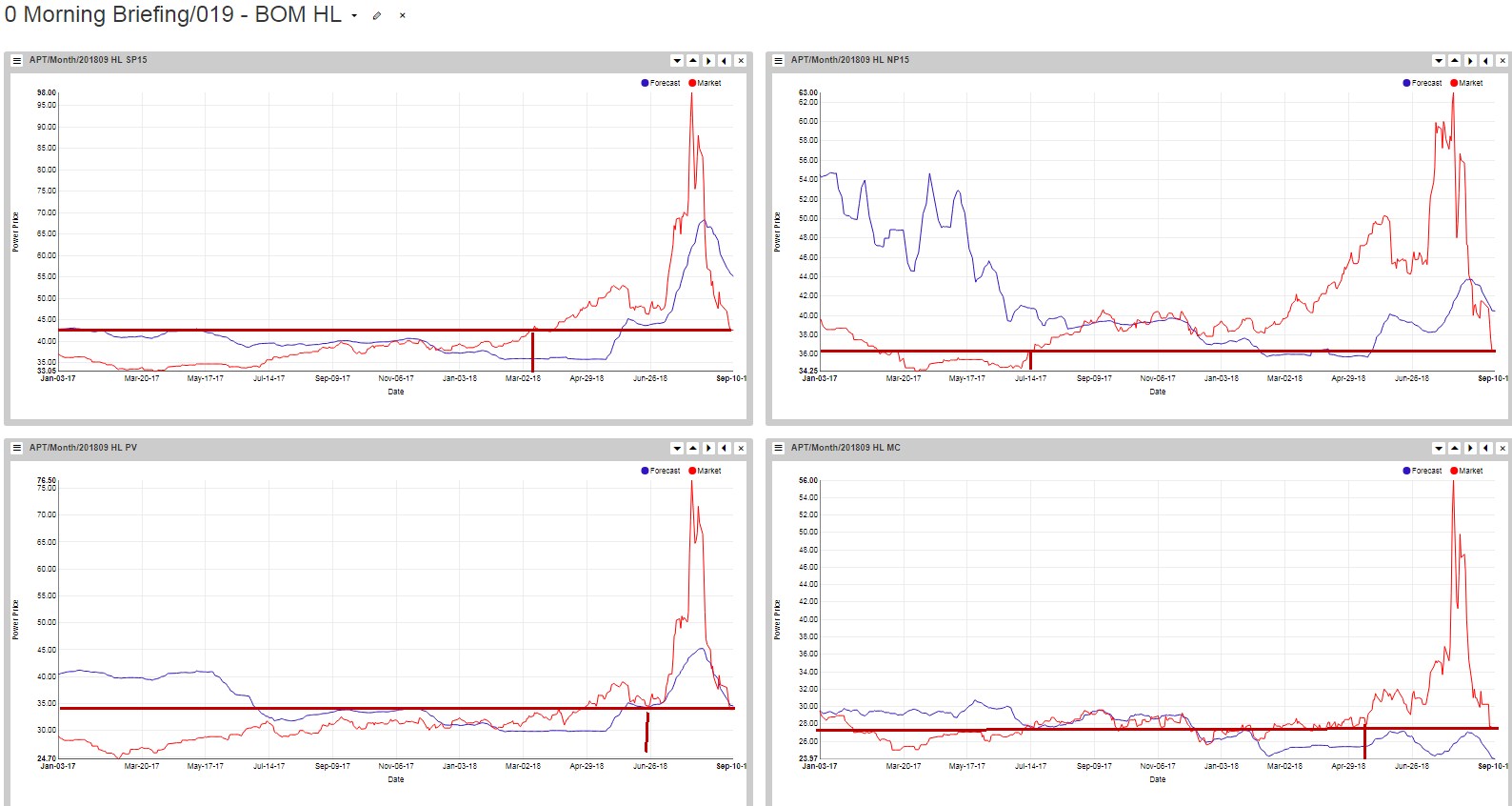 Check out those four crashes; prices are back to pre-summer, pre-Aliso Hype, levels. You may color in all the area above the red line and label it “hype” or better, “fear”. Now the fear is gone and its safe to be long, all you need is one of those Santa Anas to get paid, but we don’t see any in the next fourteen days. 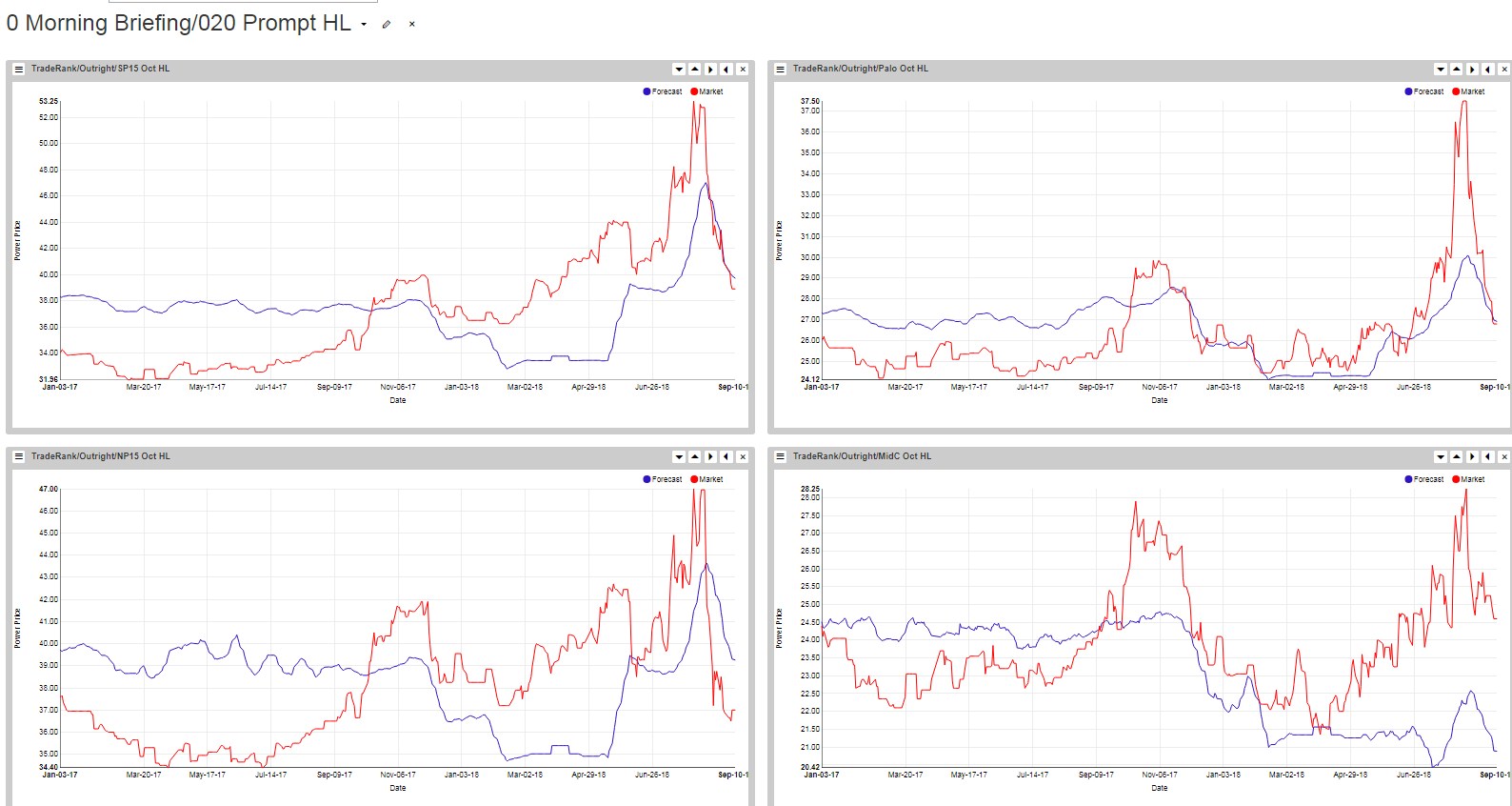 Prompt premiums have been removed, too. Could this be the start of a long-term bear market? If LA doesn’t get hot, and it doesn’t always have a late-season heatwave, then there is nothing to rally this market until it gets cold, and that is at least two months from having a snowball’s chance in Burbank of coming to fruition. Two months of just bearish news. But there’s money to be made in those kinds of markets; there are always pricing anomalies. Perhaps its time to dust off APT? 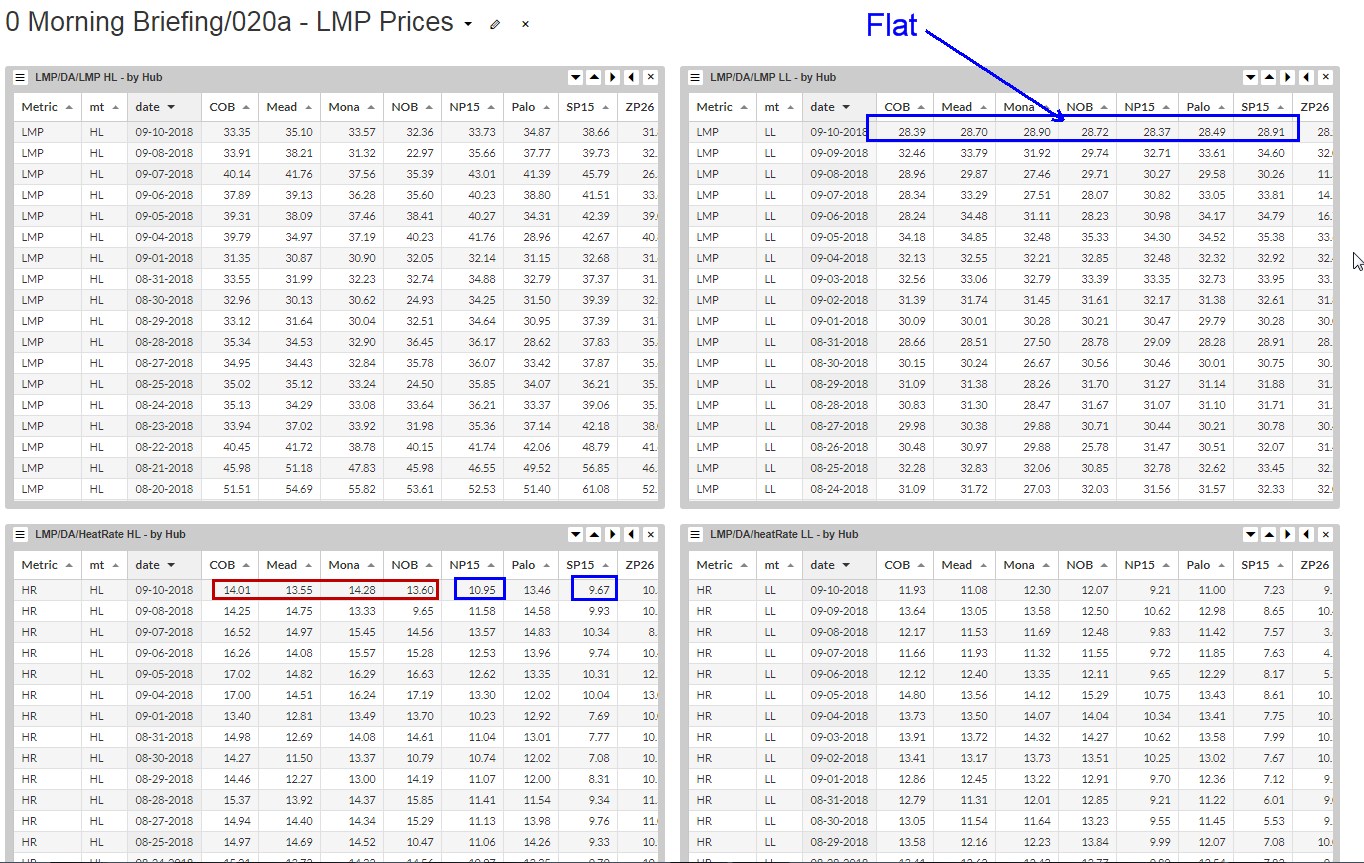 The LMPs are noteworthy in two ways. First, the external hub’s heat rates are still sky high when compared to the ISO. Second, note how flat the off-peak prices are. Across every node, there isn’t even a dollar spread. 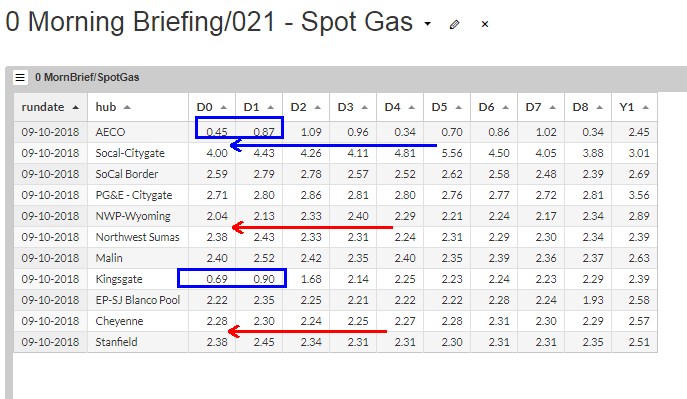 Socal Citygate still commands a premium, but now its just $1.30 over PG&E and Border is below both. Check out the train wreck in Canadian gas; both AECO and Kingsgate busted the buck, they can’t even give their gas away. Finally, and most interesting, the only hubs that saw a rally over the last five days were Sumas and Stanfield, which speaks to the lingering tight water situation in the Northwest. 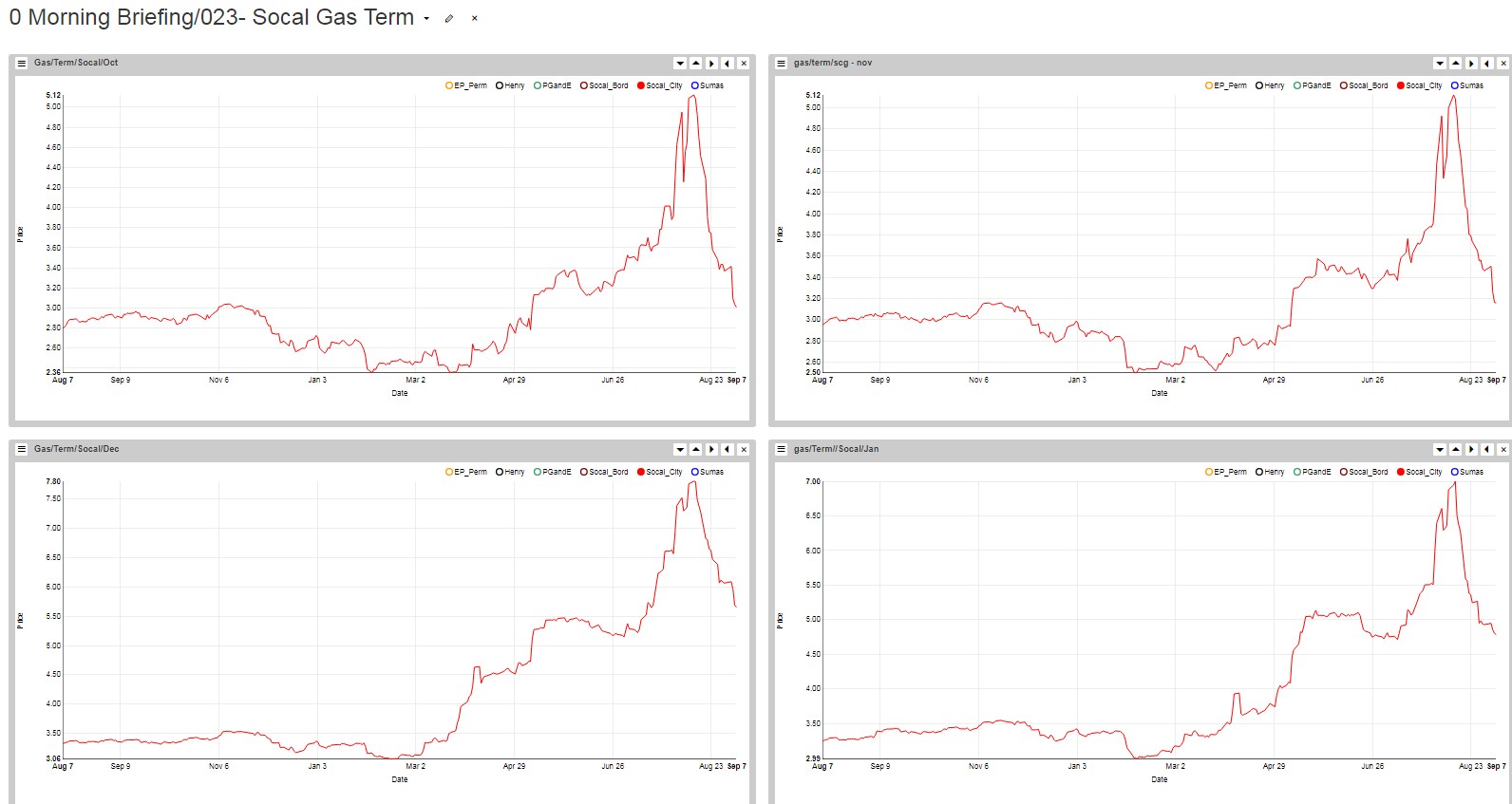 Hey, don’t those charts look like BOM? Well, those are plots of Citygate, why would the MidC chart look like LA gas? Meanwhile, the fear has been beaten out of these strips, and without that late-season heat, the angst won’t return until LA dips into the 30s and even then, it has to stay cold for an extended period to make a difference. Remember, Socal is sitting on 15 BCF more gas today than the same day last year or the year before.

PG&E is in the opposite position; that LDC is about ten bcf behind the previous two years. Socal hasn’t had a draw in a month, PG&E is still drawing while Jackson Prairie injects most days. 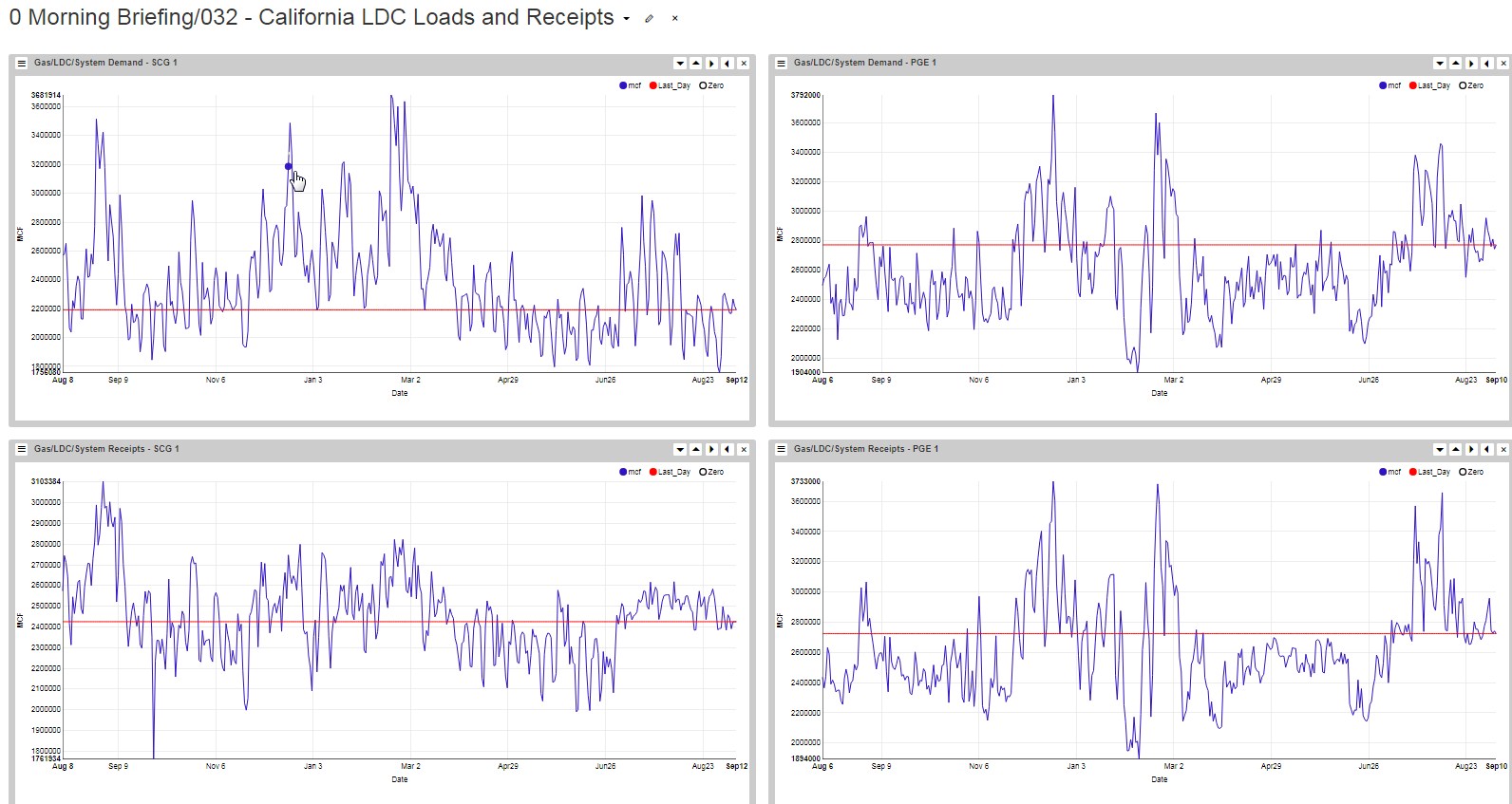 Not a lot to say except everything in Cal gas land is back to normal. 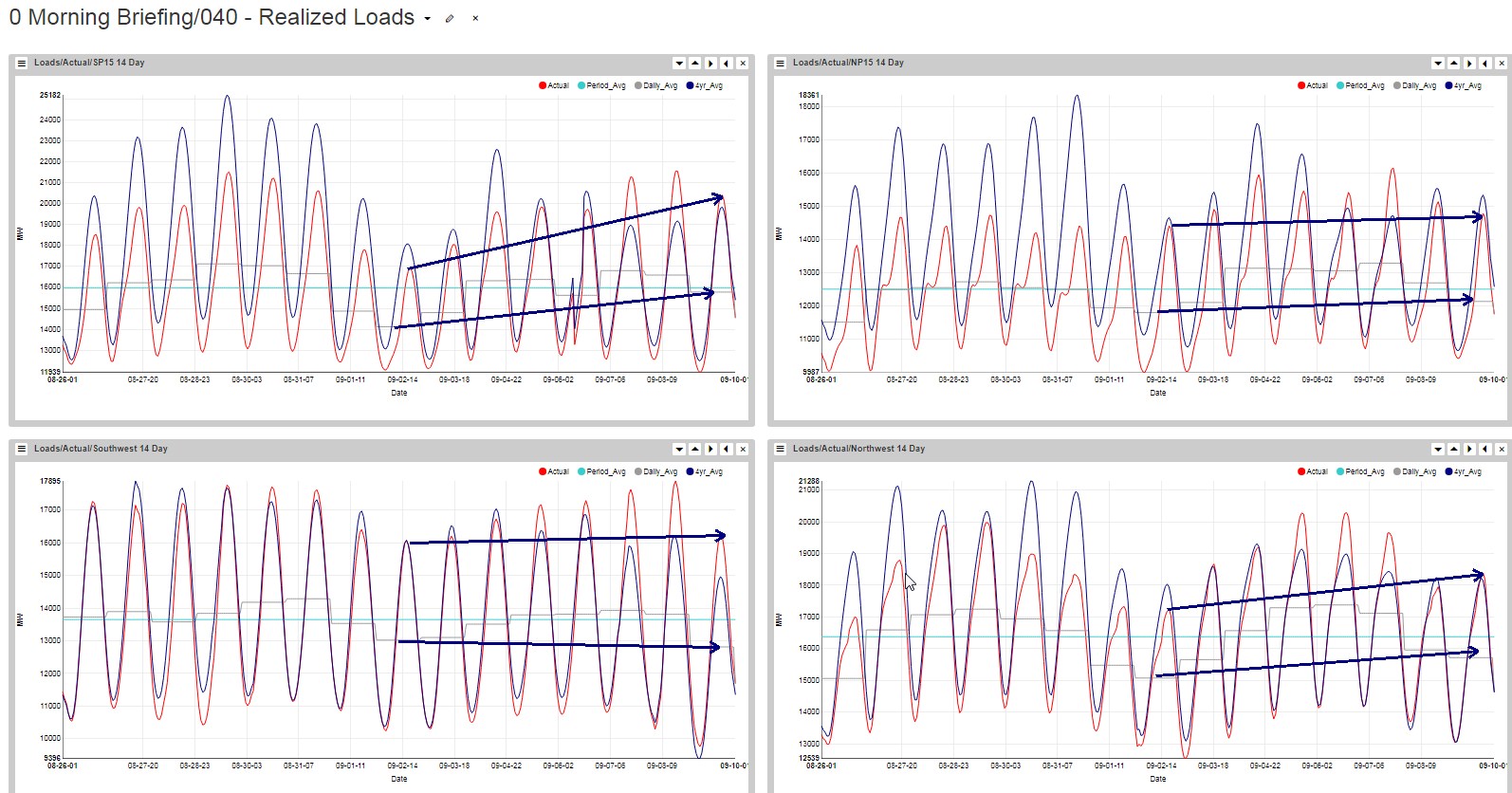 Loads rallied across all four hubs with SP leading the charge off of the 90s in the LA Basin. 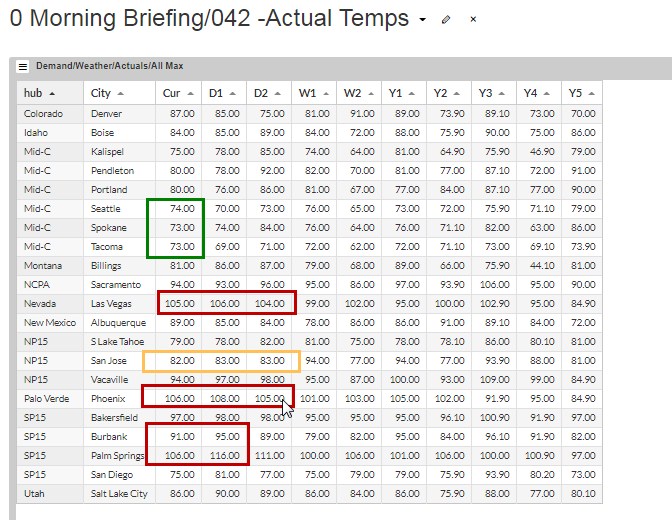 The Northwest was as temperate as temperatures get, stuck in the low 70s, perfect golf weather. That teasing heat we saw last weekend dissipated into the low 90s in LA and low 80s in San Jose. Now, it looks like those temperatures are poised to slide to the colder side. 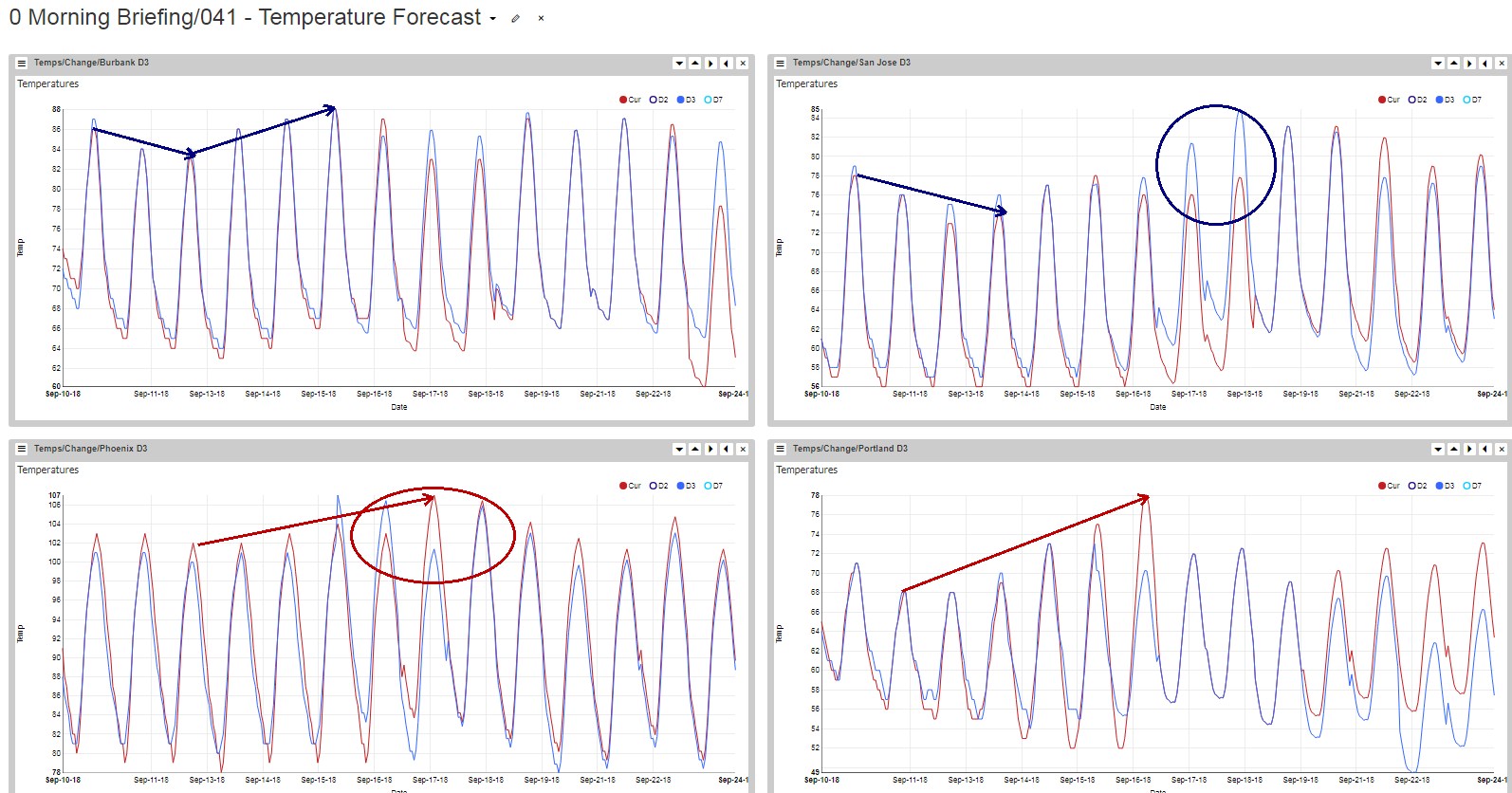 Phoenix and Portland all show builds from the forecast three days earlier, but Portland’s build only takes the City of Roses rallied to the high 70s, not a load event. Phoenix, however, remains unseasonably hot. The ISO has no surprises, good or bad, just mostly more of the same. 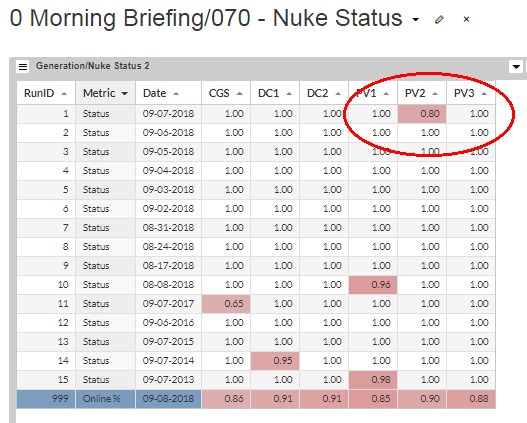 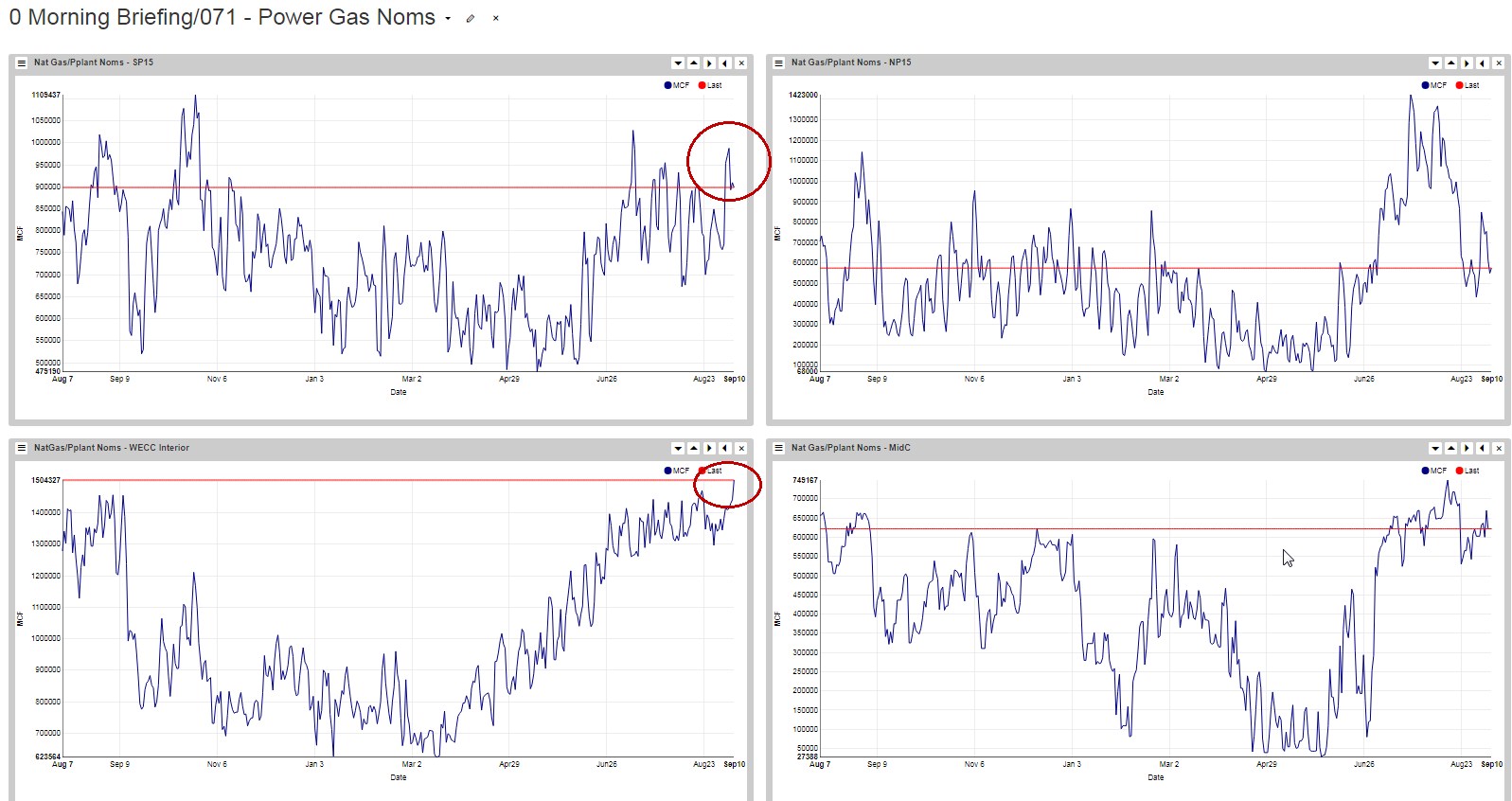 This is interesting, SP15 saw its gas noms spike off of the modest weekend heat, yesterday it burned almost as much as it did when Burbank hit 105 in July. I guess that’s what happens when the price of gas is just $4.00 instead of $16.00; the gencos can afford to burn their own gas. Palo and the Northwest remain quite bullish, the former off of that lingering heat and the latter off of that persistent drought. 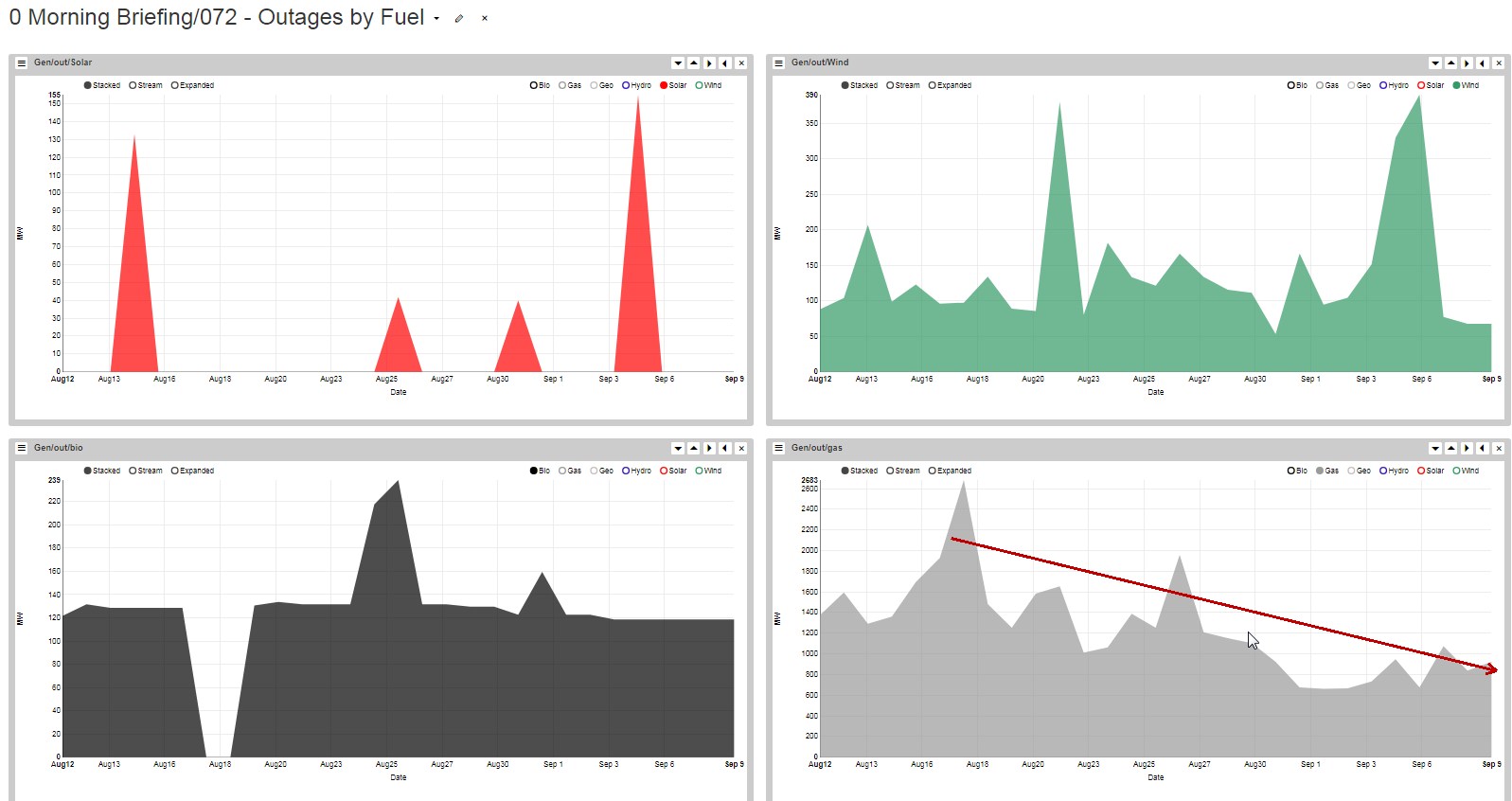 Gas outages remain at minimum and now that SP is using its own units those outages might potentially matter – emphasis on “might.” SP is barely clearing a 10k heat rate which leaves a lot of economically dispatched capacity on the sidelines.

Seattle and Portland will get wet this week, but the production-centers won’t see much. This forecast will have zero impact on Northwest hydro resources.

The Peace swung into a baseload regime, drafts from Arrow tanked, and the flows at the US|Canadian border continue to decline. 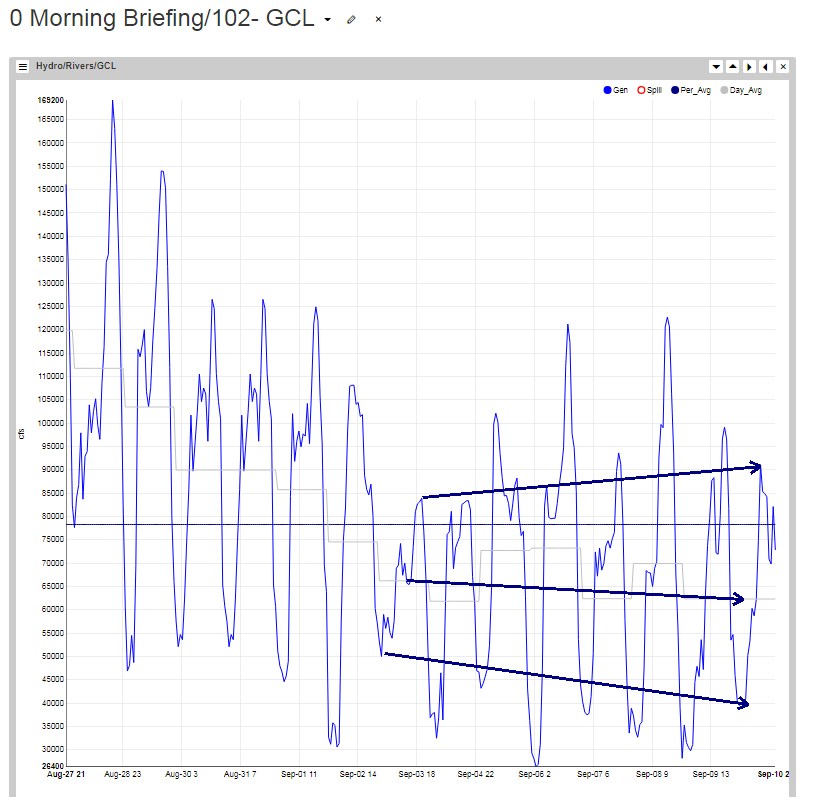 Coulee discharge has been scaled back post-Spill, BPA doesn’t need the energy and is in its saving water mode. 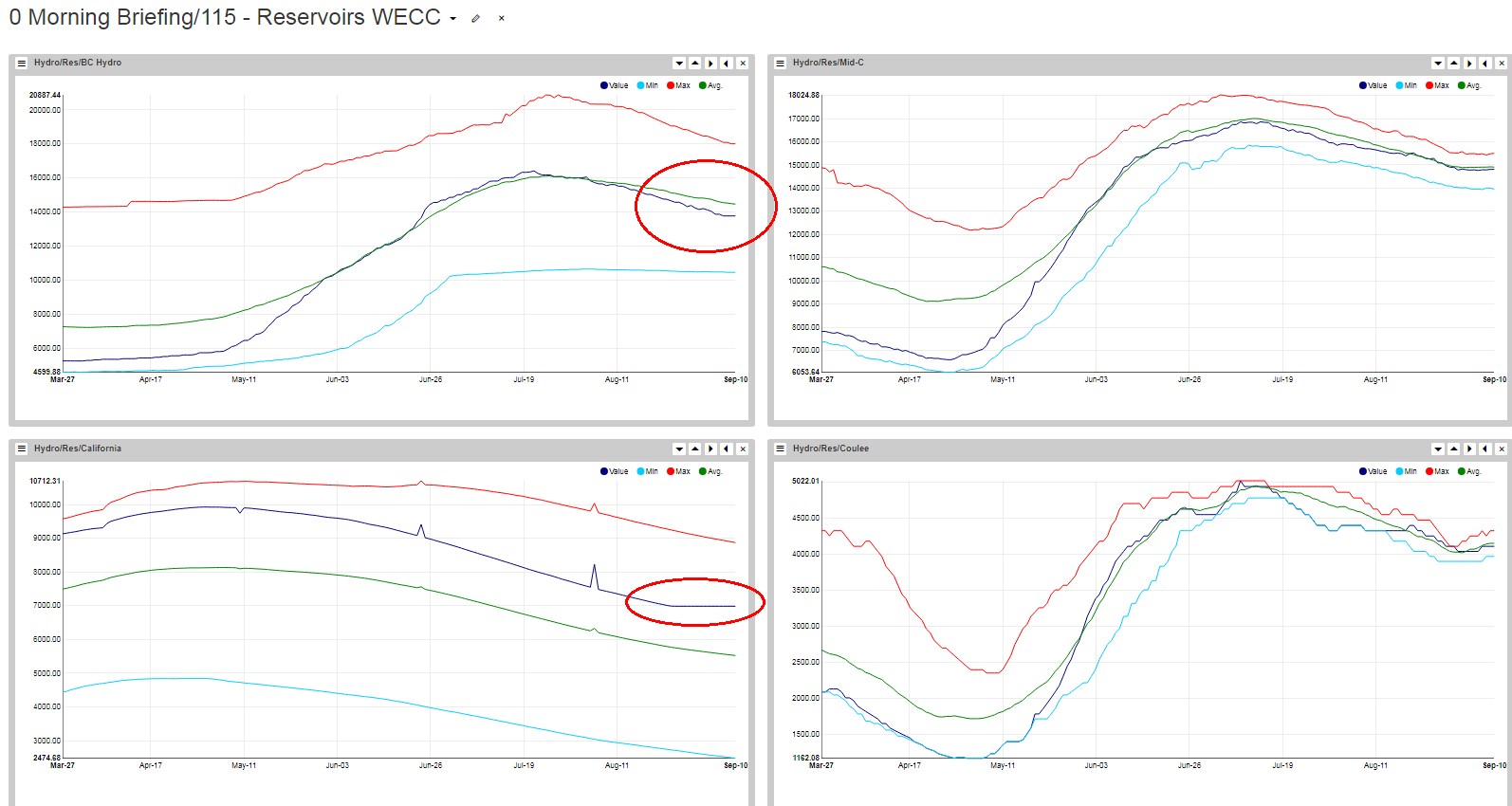 BC Hydro has a hole in its system, total storage is slightly behind average, while the Northwest is precisely at normal. California quit drafting its reservoirs as it stares at a potential El Nino. Per NOAA “The odds of El Niño emerging in the tropical Pacific by fall have dropped slightly to 60% (from 65%), but remain at 70% by winter. ” Those seem like pretty good odds to us; no doubt our friends in Kalistan are praying they get one. It’s like manna from heaven for them.

Flows through the turbines on the mainstems are nearly back to Spill levels. There was a surge in energy for a week, now almost back to the August production levels.

Shasta scaled way back, the Pit quit shaping water, and the rest of the rivers are at minimum flows. 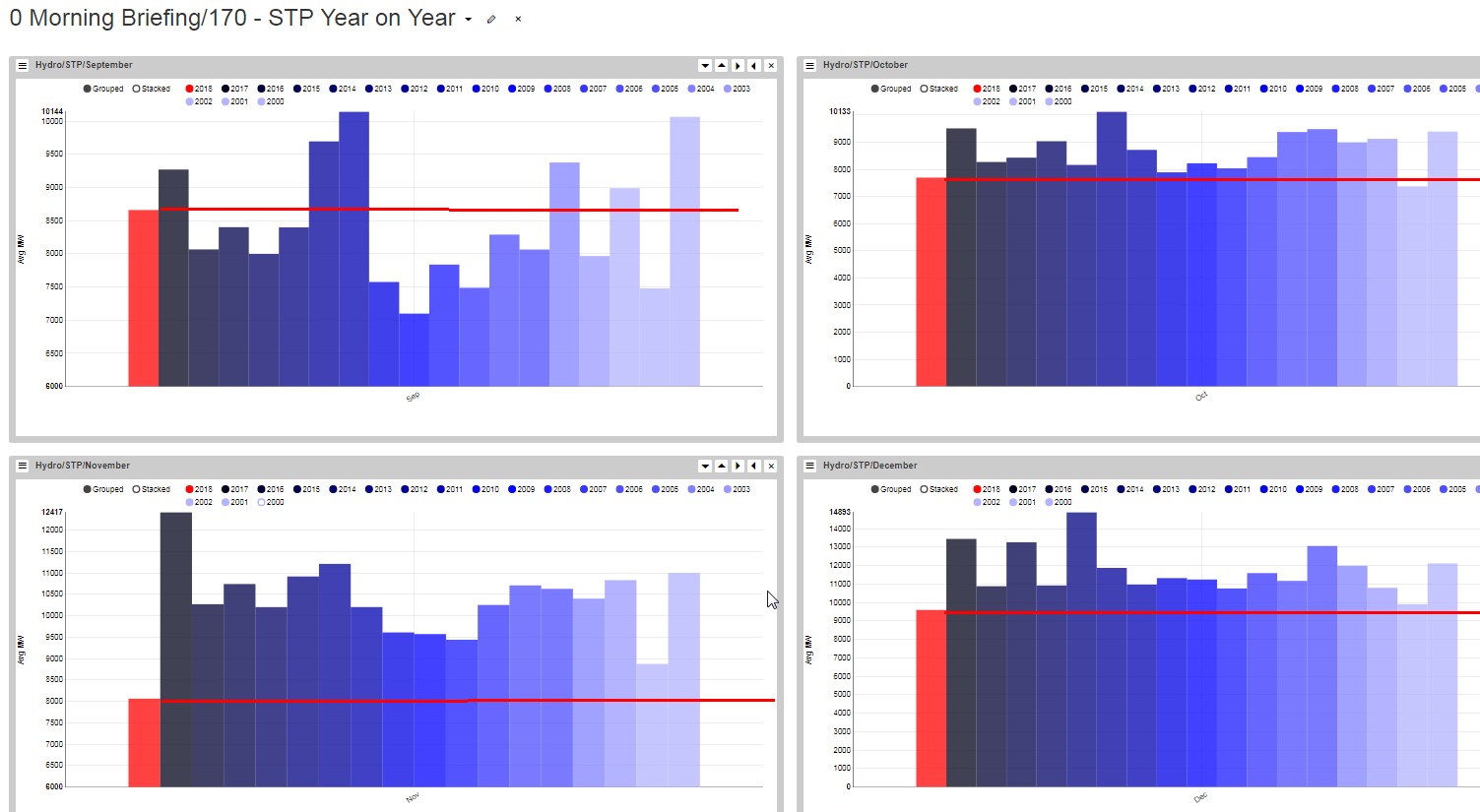 Time to climb back on this horse, the Nov-Dec STP pony, that is. We still think its way too bold for our friends in Portland to predict the lowest November in 20 years, not while they are forecasting BOM and Oct to be about average. What gives? Are they really that good that they can predict a massive precip anomaly sixty days out? From past performance, we think not. 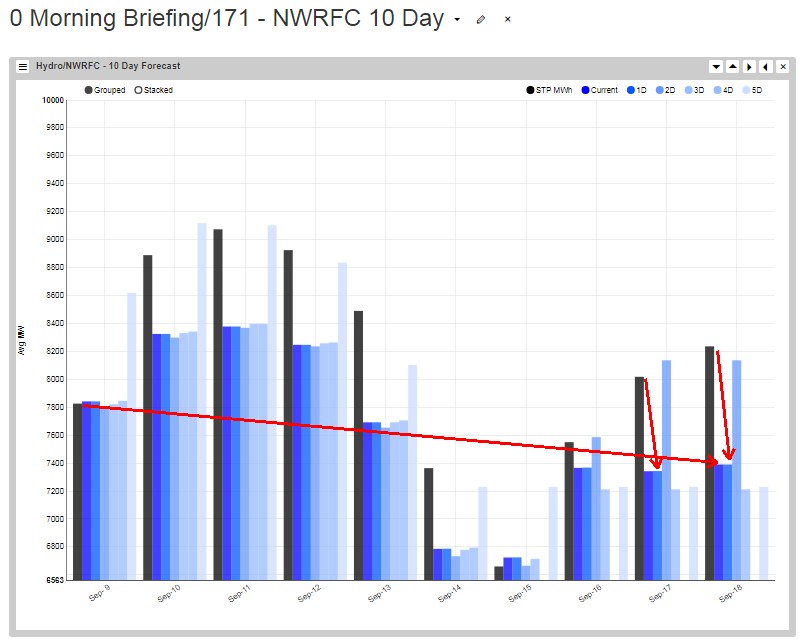 If the 10 Day is a Tell, it is telling us to expect BOM cuts in today’s STP; those BOM cuts may spill into OCT and heck, why not cut Novy-Dec some more, too? 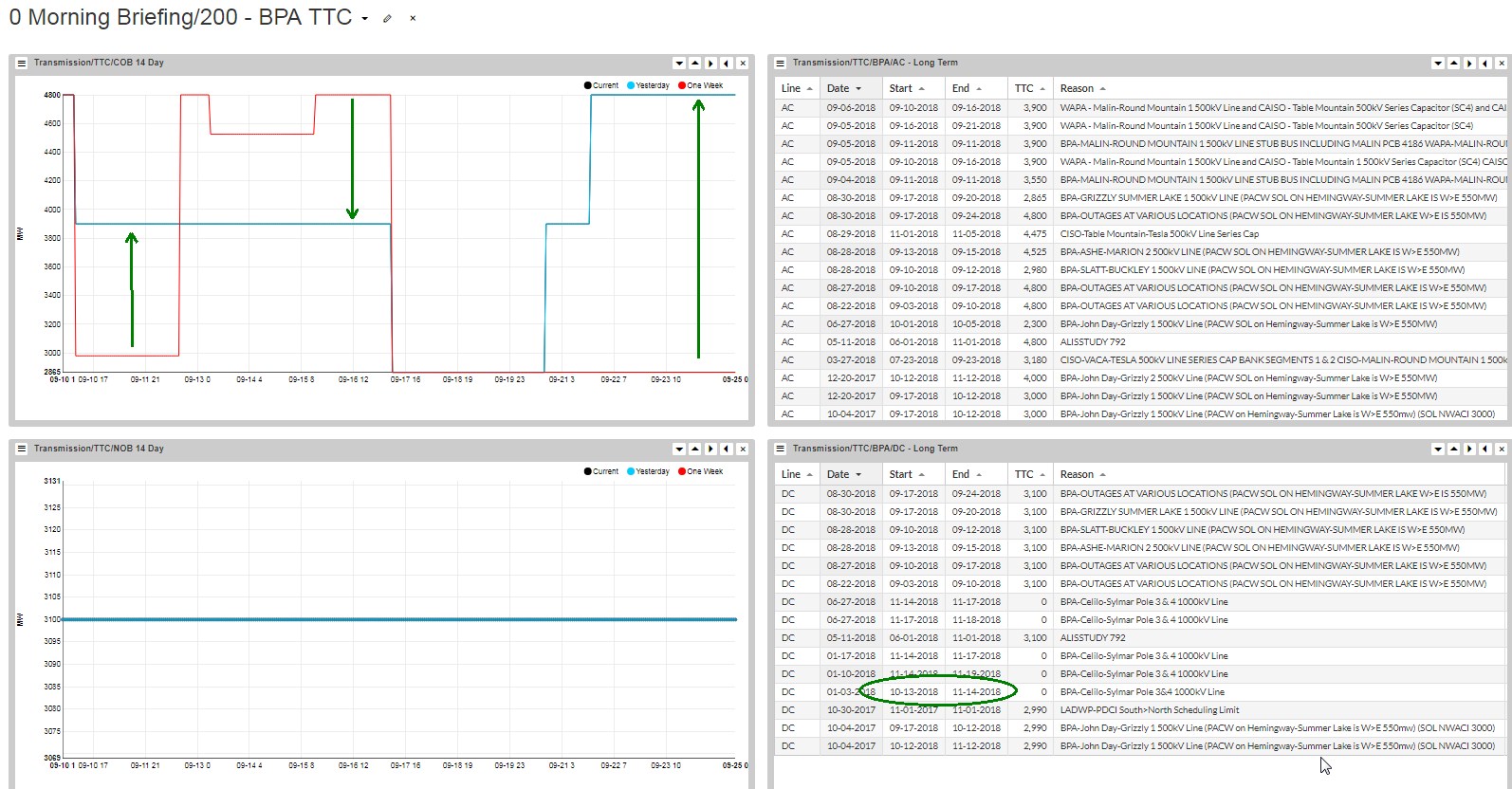 Some tweaks to the AC’s TTC, nothing changing on the DC front. We circled the Oct DC outage since its approaching that thirty-day window.

The Canandians are saving the Mid-C day by importing energy, otherwise, the price would be that much uglier. The AC cannot fill the line which speaks to how tight those spreads are. Despite a warm event in SP, flows on Path 26 are more north-bound than south. Flows on the Palo line have declined over the last week as APS tells the ISO “no thanks” and keeps its energy at home.

Bearish, but the best cure for a bear market are low prices, and that’s what we’ve got. I’d start layering in some long lottery tickets in the south and pray for a big Santa Ana. If it doesn’t happen, doubt there would be that much pain. As long as the Northwest doesn’t get any significant precip, energy will be tight everywhere.