The heat’s back but somewhat short-lived. We saw big heat in San Jose yesterday, today the Bay Area has cooled down, nearly ten degrees cooler than yesterday’s forecast. Still, the heat is real and will arrive this week. 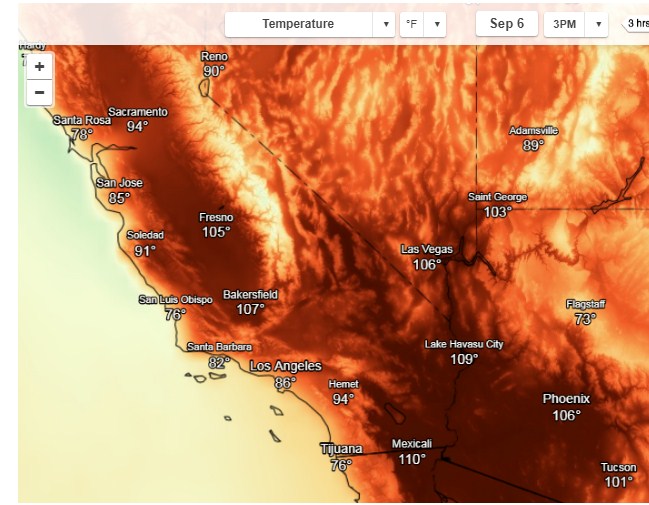 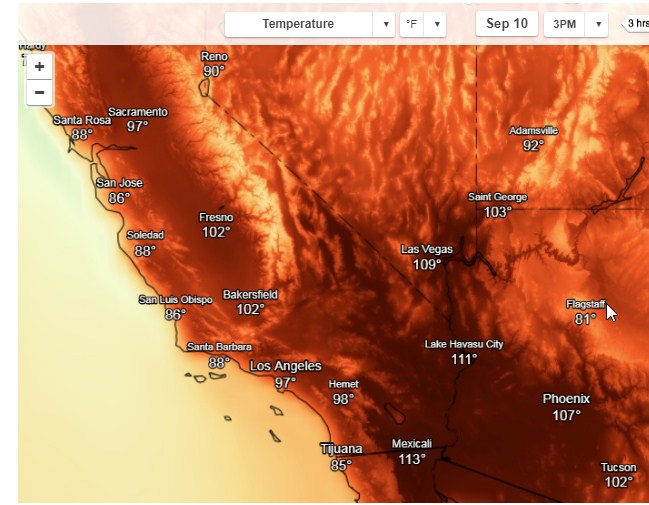 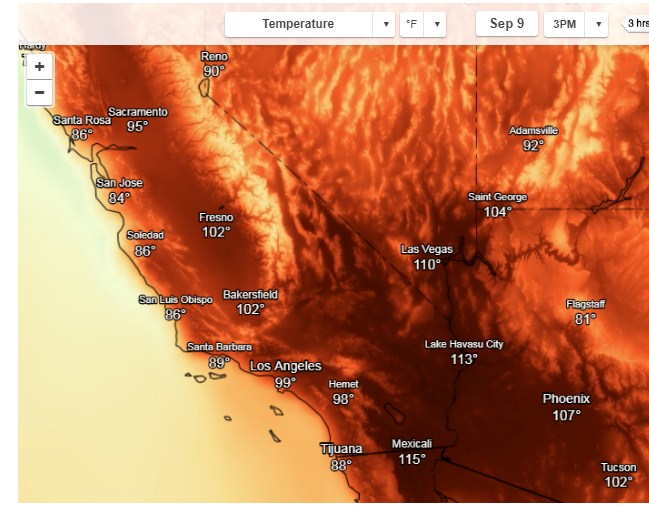 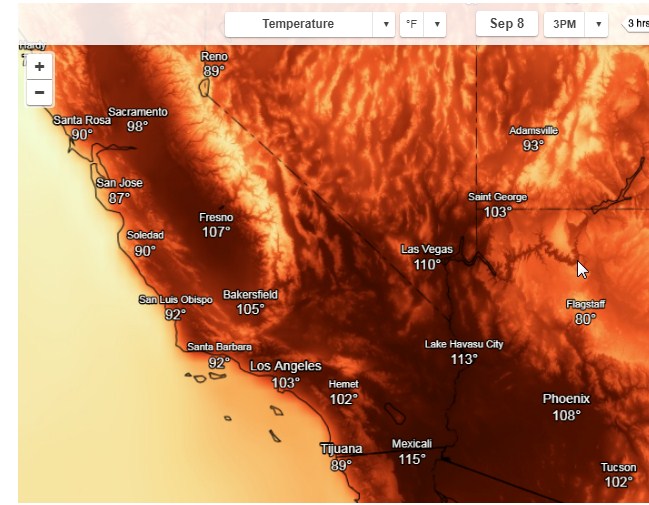 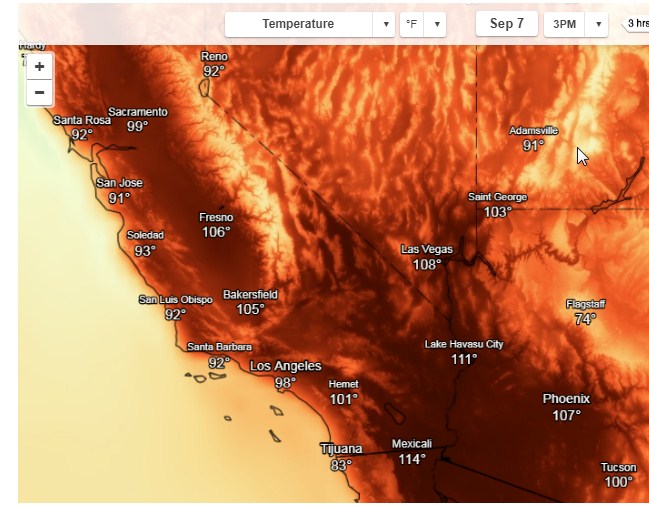 Sunday looks to be the hottest, seventeen degrees warmer than Thursday. BOM LL, anyone?

It’s easy to overlook days 0 to 6 if you over-focus on NOAA’s term forecasts.

Those remain warm in the southwest and well-below normal in the Northwest. Unlike the late-July early August events, the Northwest won’t find itself in such dire straights. Not only will loads be off, the spill ended.

Net, this change isn’t creating much new energy, mostly it means BPA has way more bullets in its magazines to fire at head-fake bullishness. Should NP enjoy big clears you should expect Malin500 to be full. Of course, NOB will be full as well. 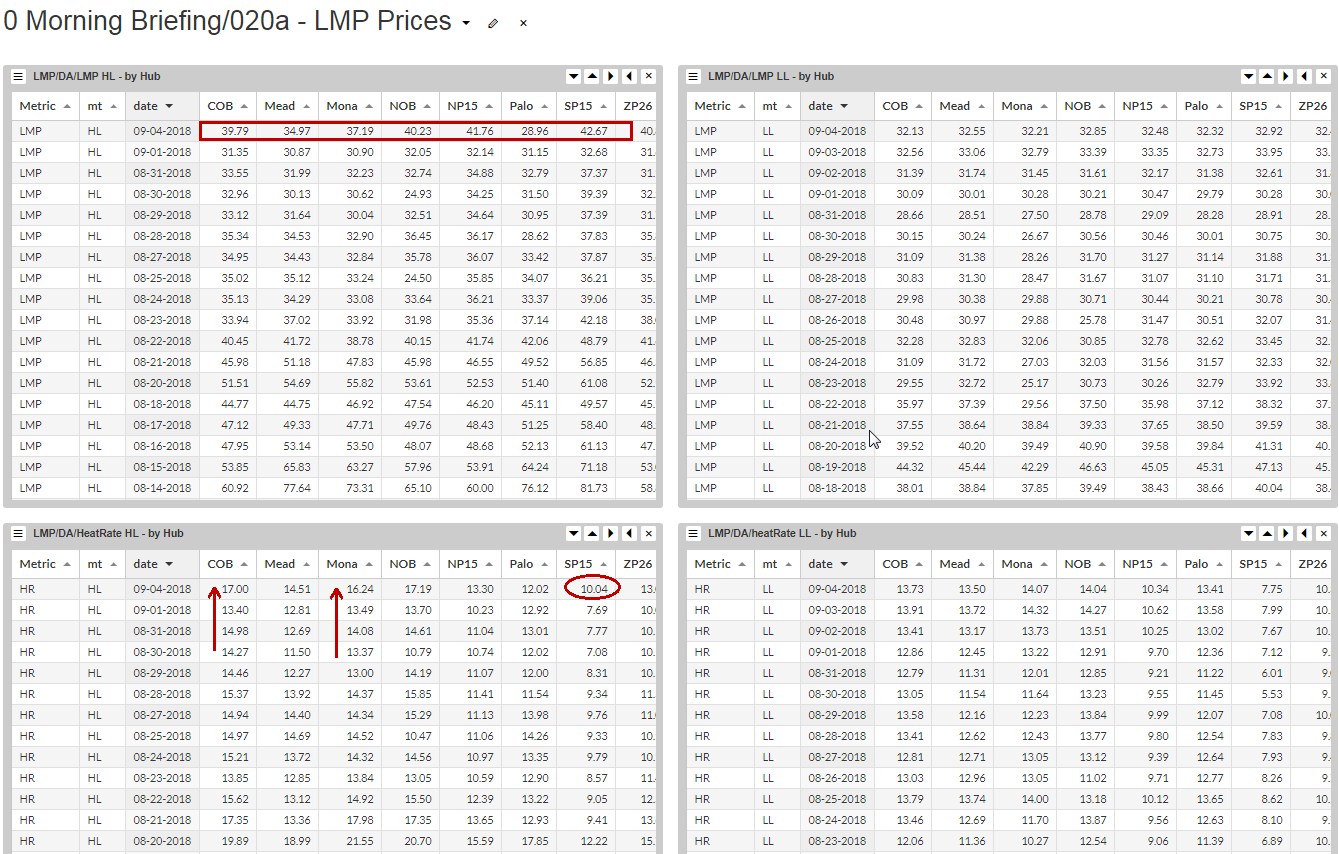 Even with the relatively mild forecasts for today, 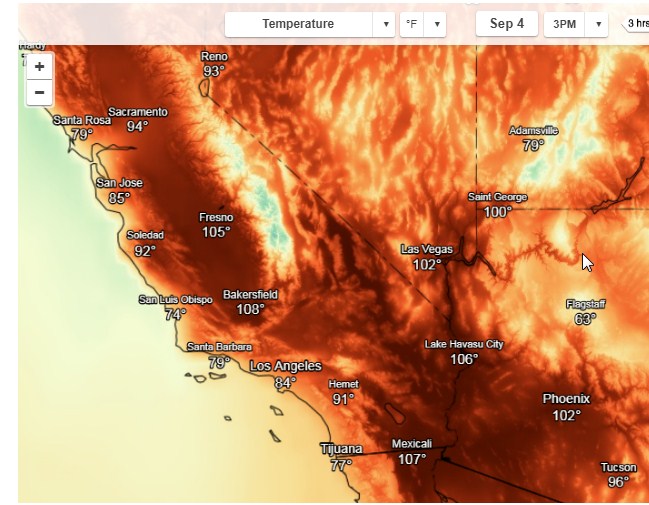 the LMPs rallied up everywhere. It seems the market wants to jump, just wait until loads support those leaps and we’ll be back to triple digits in power and double in gas. 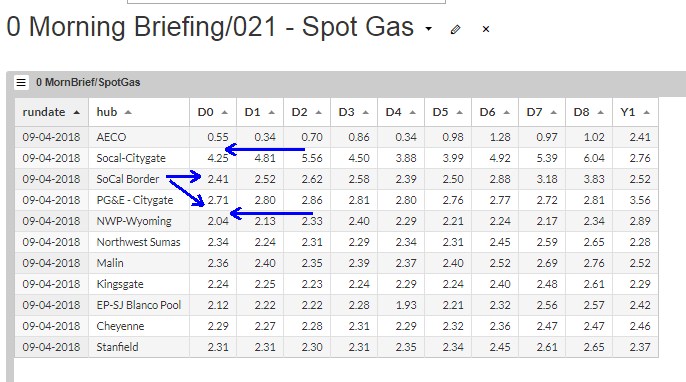 That small rally in LMP price was in the face of spot gas declines resulting in a more normal type heat rate for SP15, 10k. The rest of the heat rates are nuts, still 13-15k on mild weather. Seattle realized a high of 73 and Burbank flirted with a 70 handle, too. 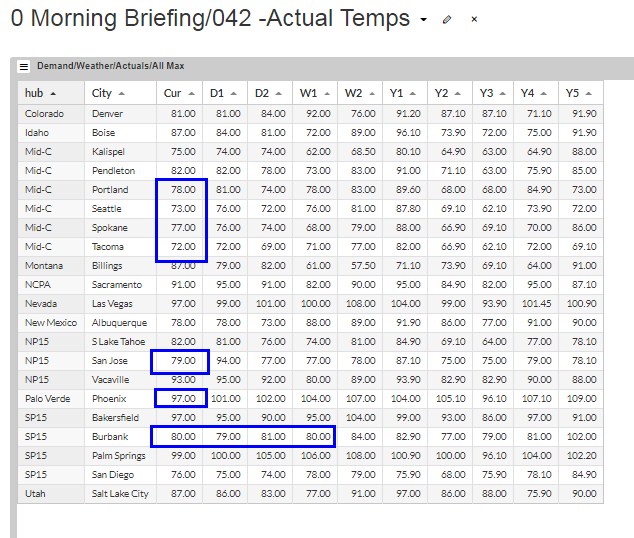 The above charts are all major west gas hubs, the Socal bearishness is amplified when just looking at that hub: 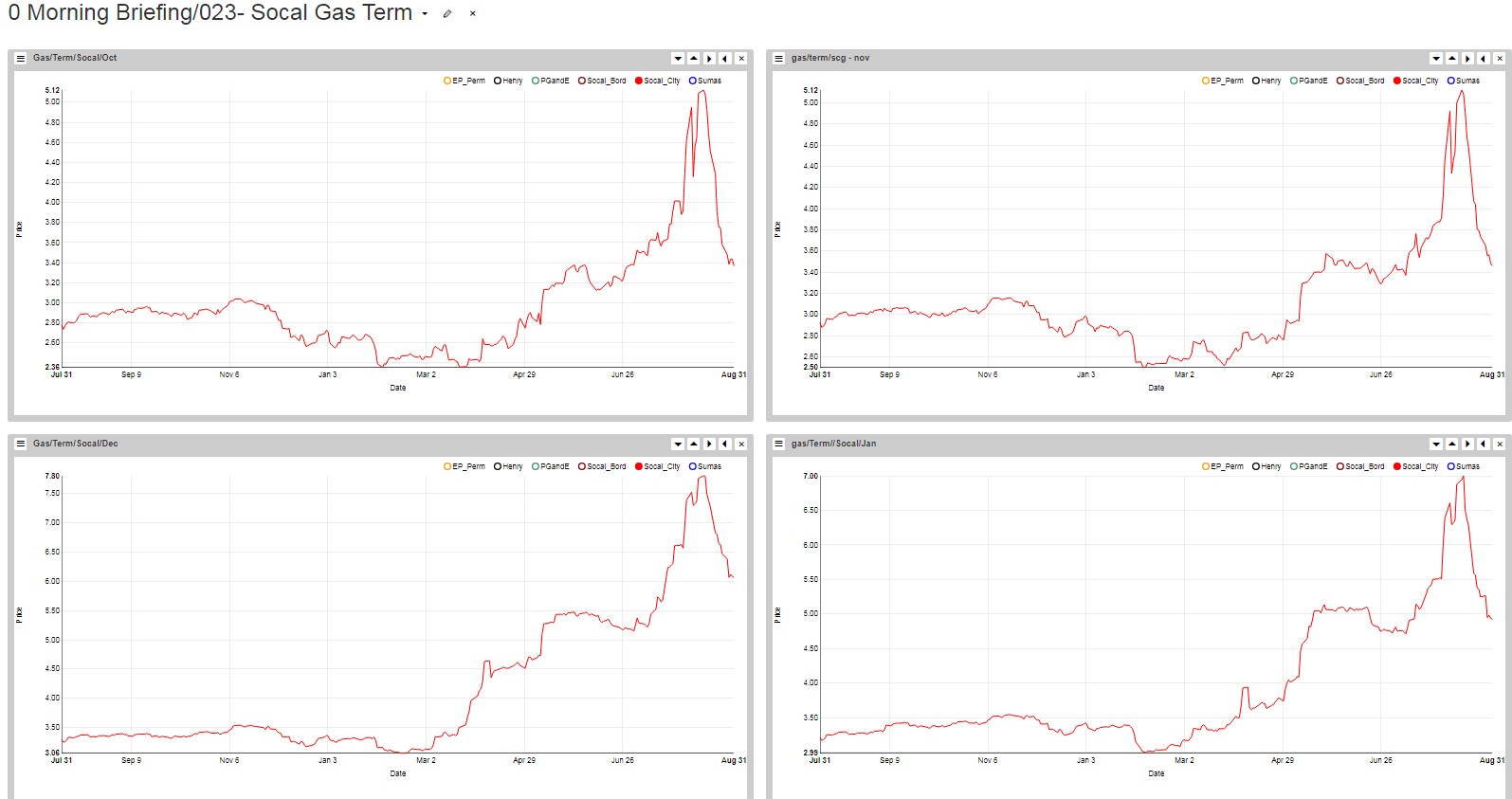 We think October is interesting given its proximity to September and the number of late season heat events LA has realized (Santa Ana, anyone?). Let’s see if term gets bid up this week. One fundamental reality that may have finally been factored into price is storage. Socal is sitting on 20 bcf more today than in the last two years.

PG&E is a different story, that LDC is 15 BCF behind its three-year average, but you wouldn’t know that from prices. 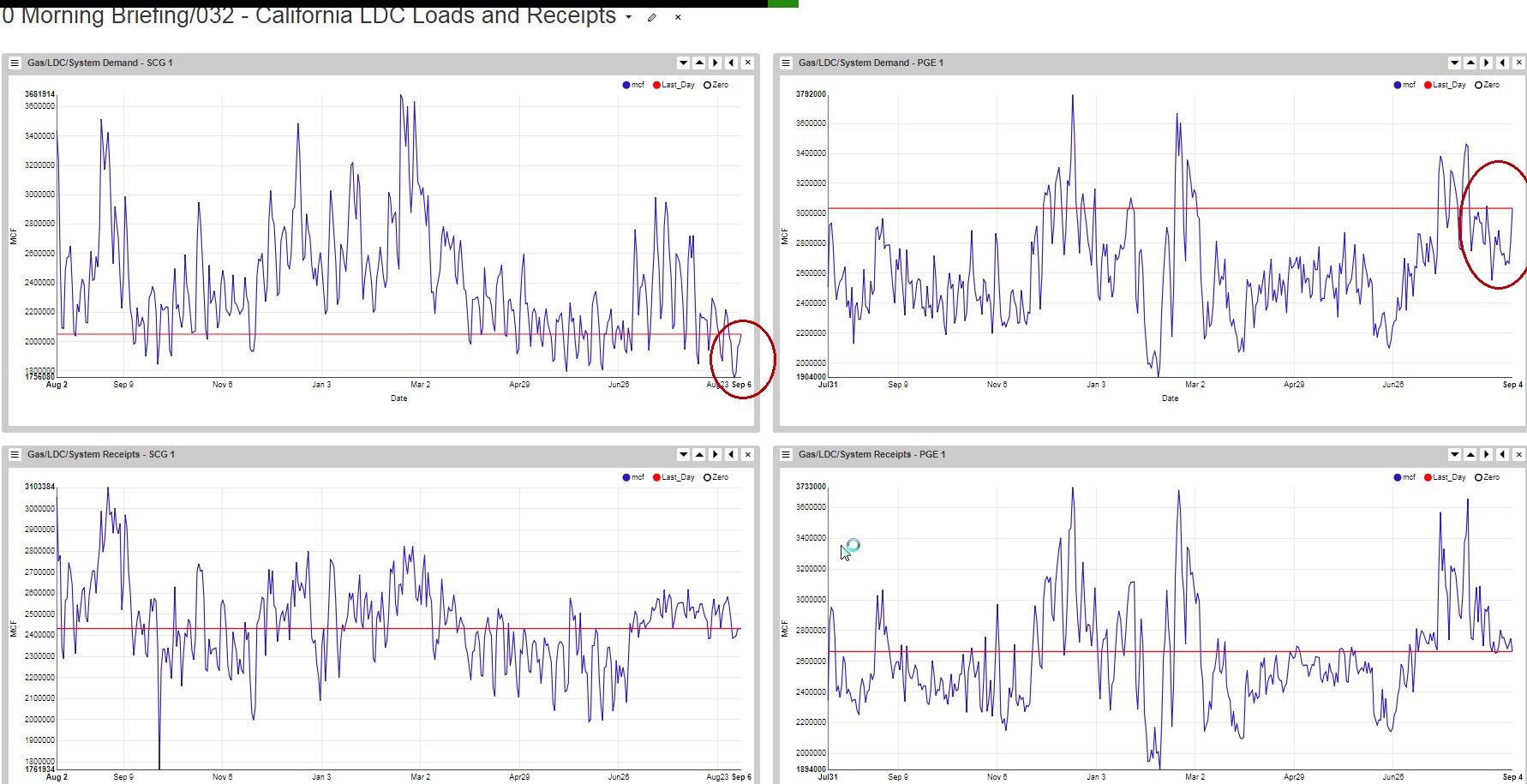 Demand is up, slightly at both LDCs, while imports are sideways in Socal and dramatically off at PG&E. 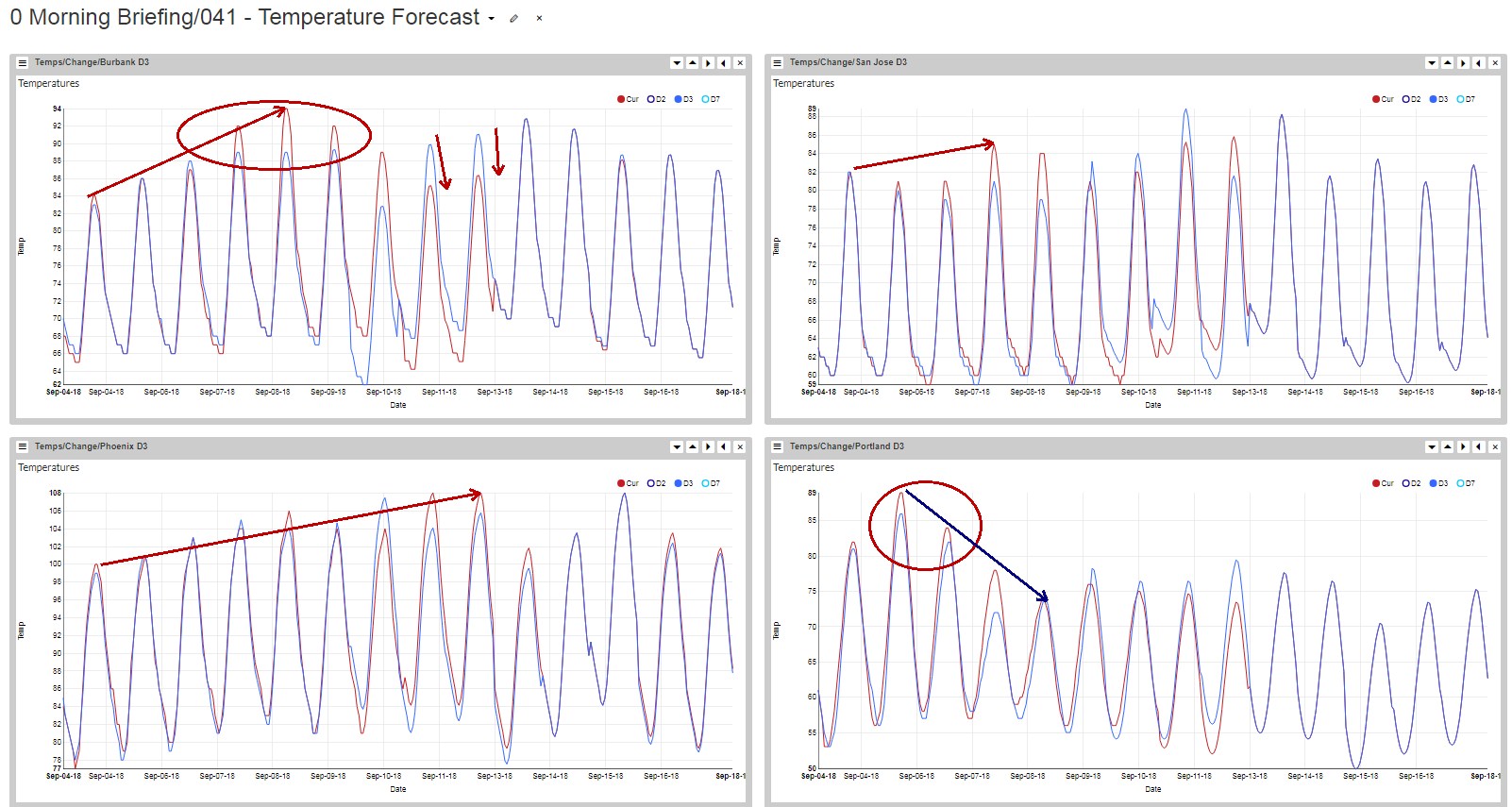 We already talked about Socal heat, but didn’t mention Palo. It appears Phoenix will be getting ever hotter every day for the next ten days, cresting close to 110 which will set several new September records. 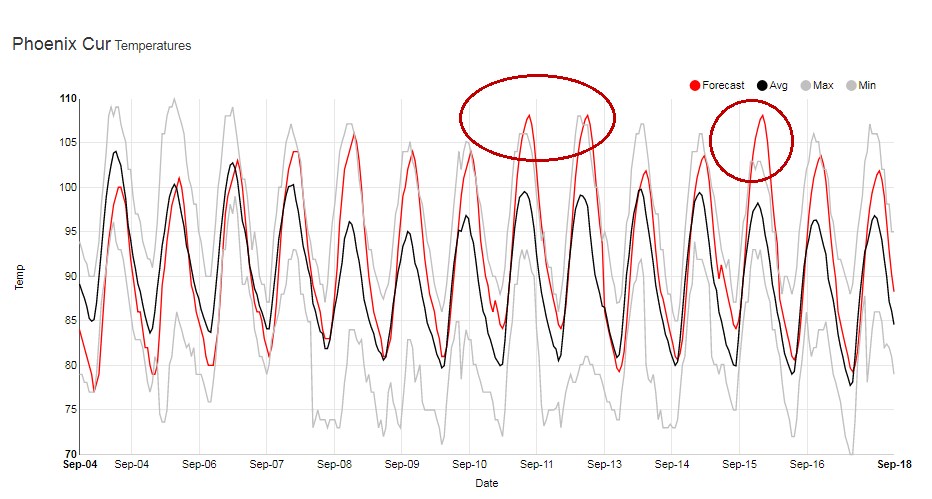 NP loads are up, SP sideways, and Palo’s are off. The Northwest’s were up. slightly, off of very cool weather last Sunday.  On the generation front, not much to report. The nukes are all running and its too early for Fall maintenance. 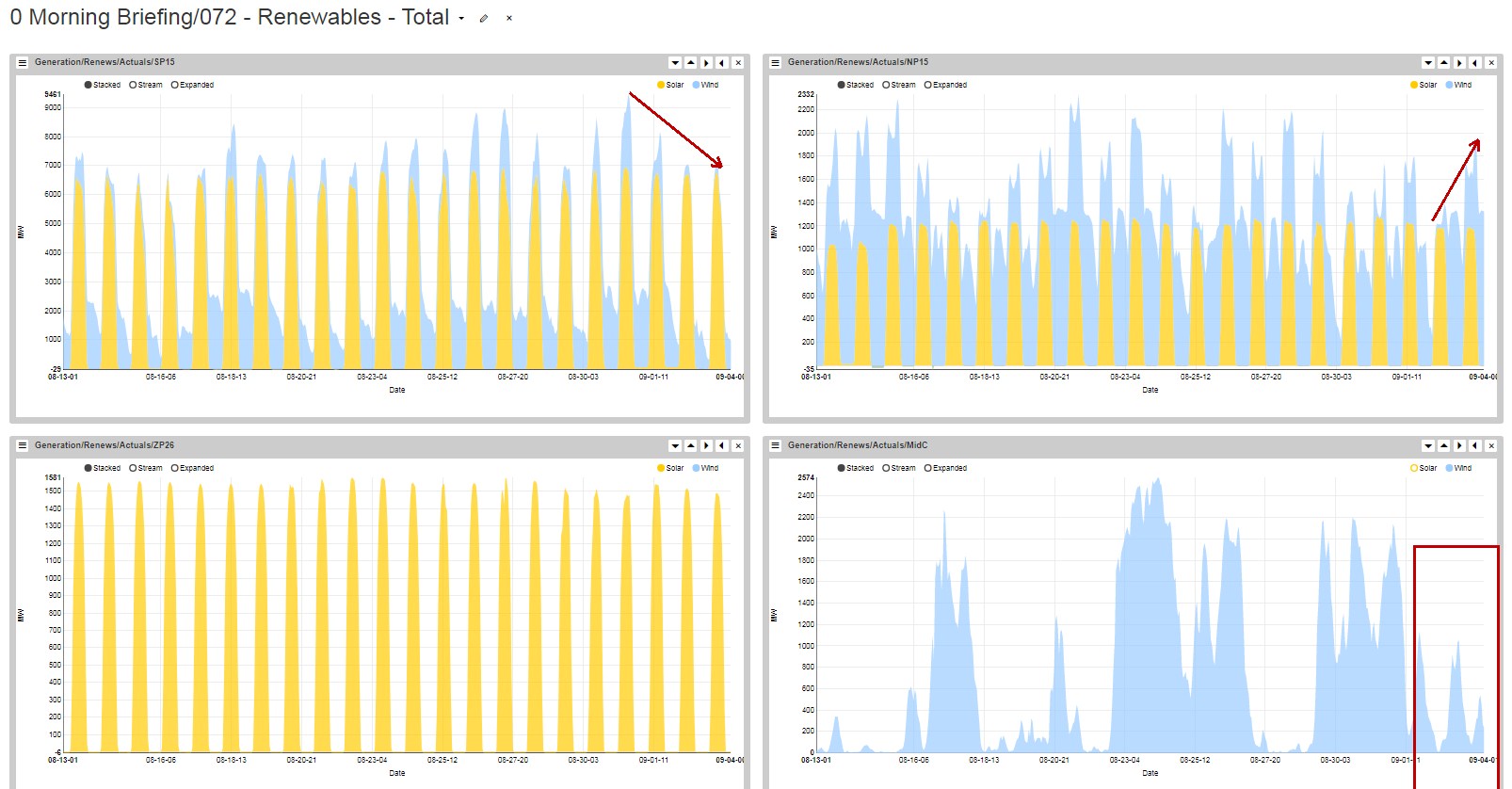 SP was becalmed over the weekend, as was the Northwest, but not NP. 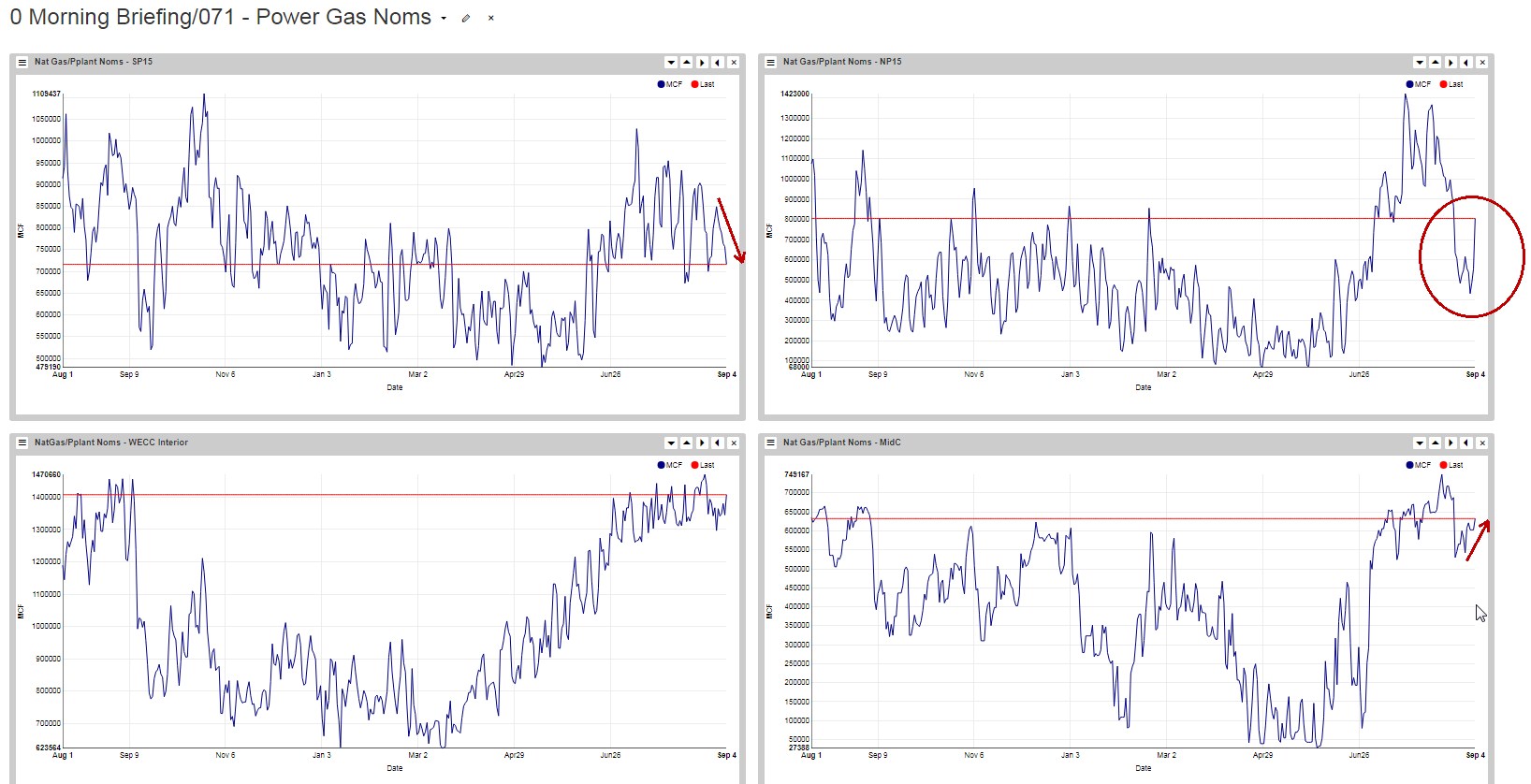 NP’s noms staged a rally of sorts while SP’s cratered even further. Palo and MidC’s remain strong, be interesting if the latter backs off now that the spill is over. It must be tempting for BPA to make itself long by drafting into these 13-15k heat rates now that it isn’t wasting half its fuel on fish. Of course, if BPA makes itself long (by drafting) it makes all its Slice clients long too. Perhaps we might see cash spreads blow out?

Way too early to care about rain, or is it? The backend of this forecast is more wet than not and water is a cumulative commodity. Eventually, the ground gets saturated and the rain hits the rivers. Worth watching, not worth trading around it, yet.

The Peace is cycling, pretty much load following while energy flows northbound on the Northern Intertie. Arrow has been backed down mostly because BPA ended the spill.

The mainstem saw energy production jump because of the termination of spill, but total BPA hydro energy didn’t move. 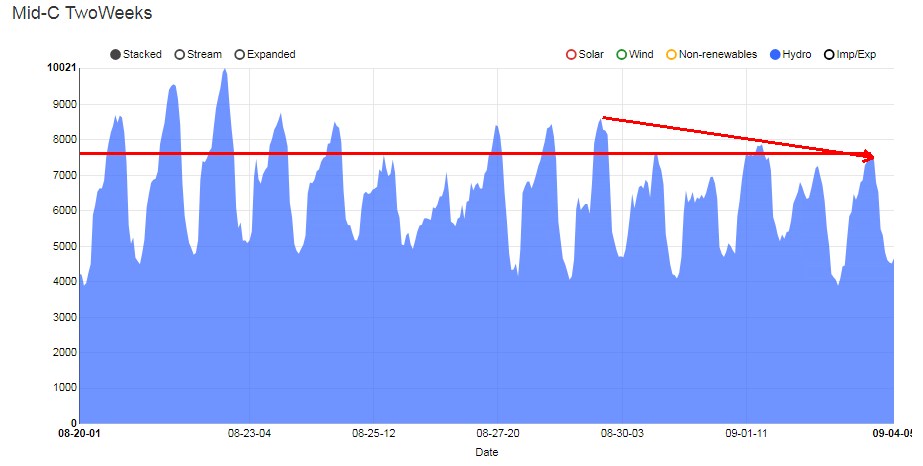 Think that Pea game, no not the “Pee tapes”, the Pea Game. The one where there is  a pea beneath three shells and the scamster makes you guess which one the pea is under (when in truth, its under none of them.). BPA does the same with water; it now flows more through the mainstem turbines and backs off Coulee. 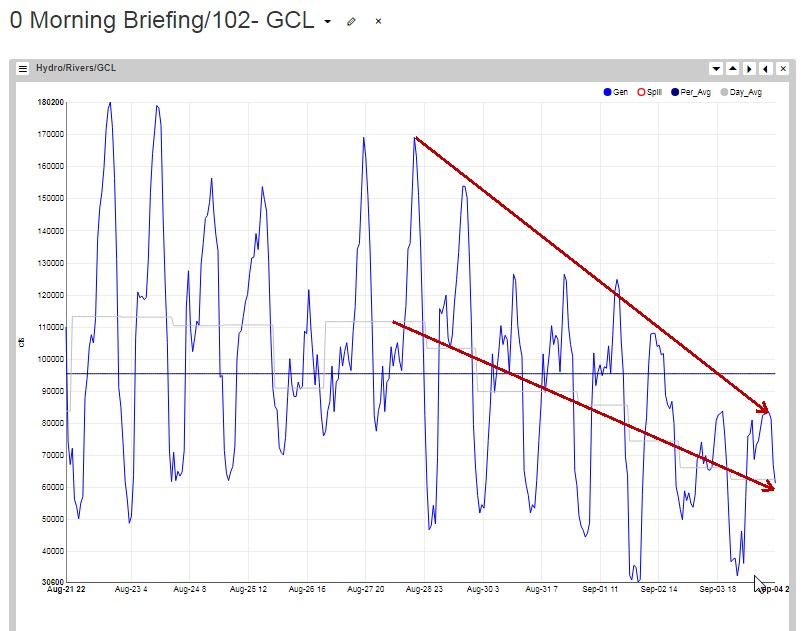 Where’s the pea? More important, where the heck are those “Pee” tapes? I’d give a free week to all my clients to see the Donald’s golden shower on CNN.

California water is getting tighter, Shasta continues to cut discharge but note that is inline with the ten-year averages. Strangely, the Pit quit shaping, not sure what is happening there. Did the reservoir  finally run dry? 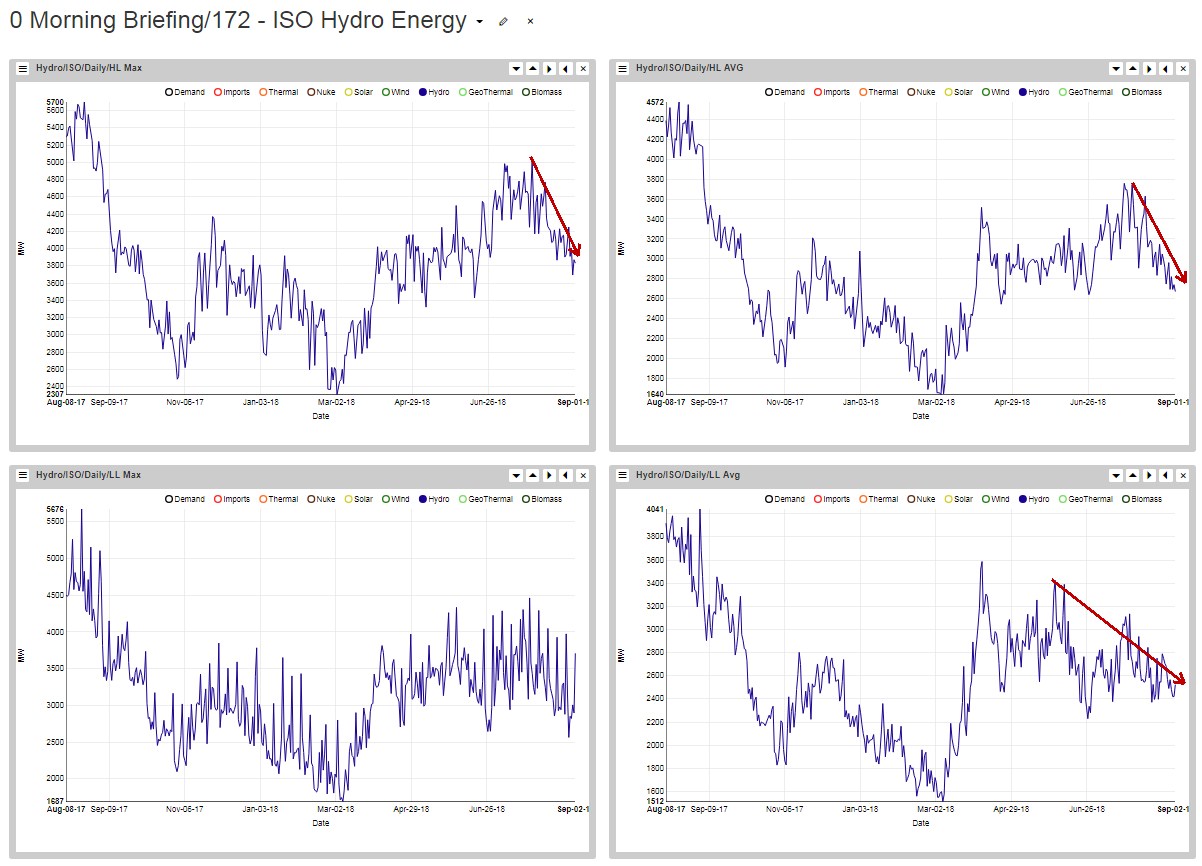 Total ISO hydro energy production is off and, until it rains, will continue to drop. Although, with this week’s impending heat, we expect the ISO will draft again. 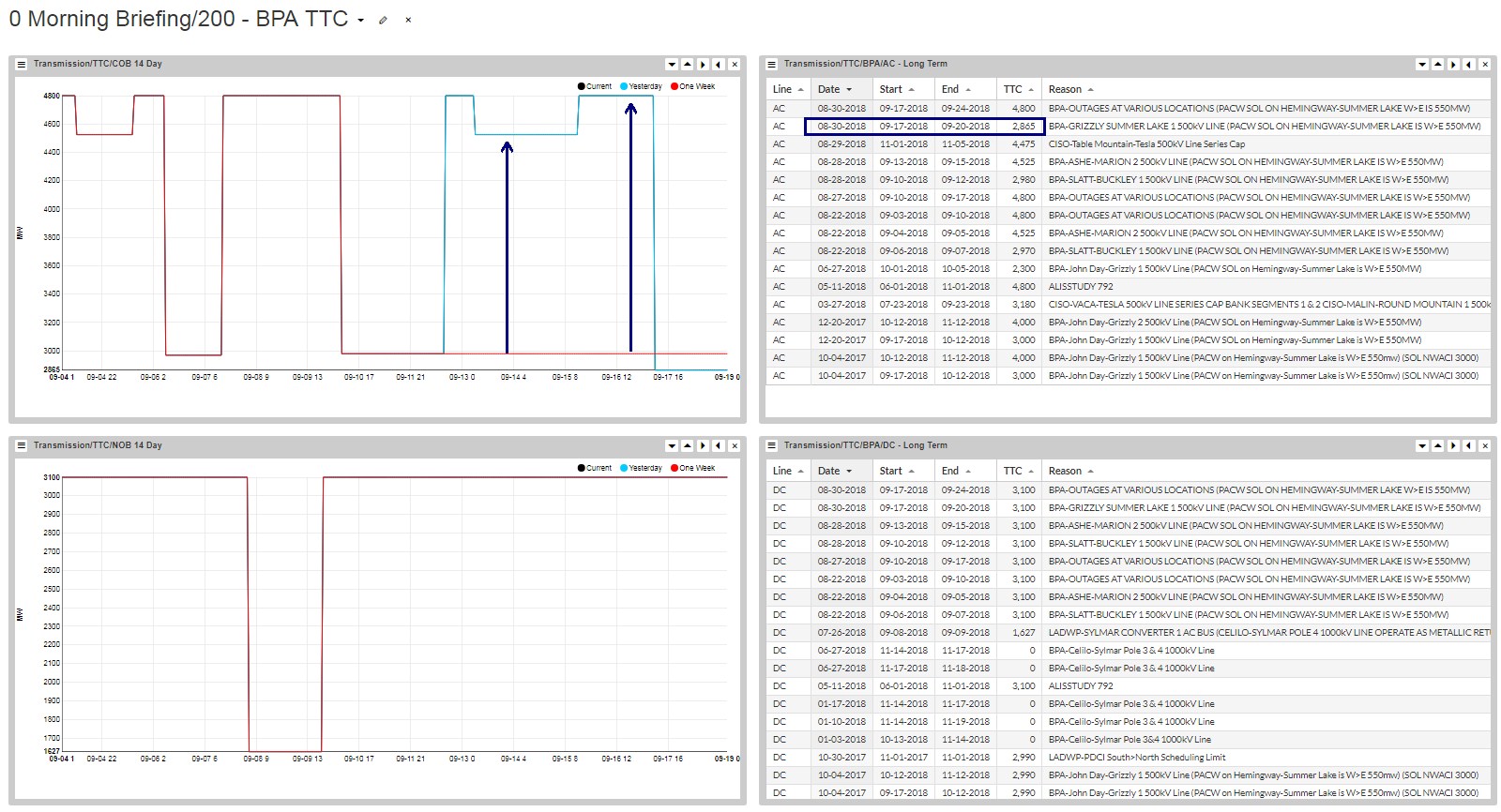 BPA raised TTC on the COB, no NOB changes.

The Northern Intertie is flowing North reflecting weak prices at MidC. Which reminds me, does anyone else follow the EIM clears? 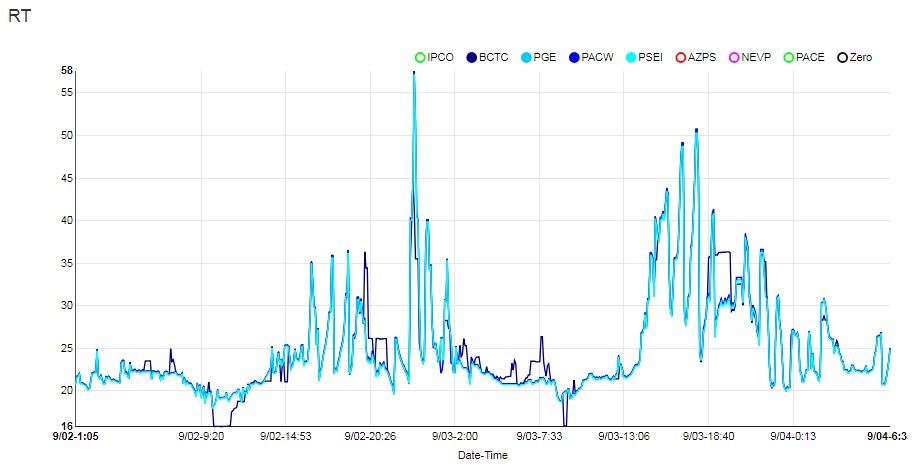 In this plot, we filtered out the Northwest participants (Puget, Portland, Powerex, and PacWest). First, note they all begin with “Pee”; second, check out the tight settles for all four which makes sense since they are all clearing against each other, mostly. The question we have is this. “Do these prices reflect hourly real-time?” If yes, perhaps this is the long-sought hourly MidC index, published in real-time in five-minute ticks? Let us know what you think. We’ll do some averaging and compare to the dailies and publish our conclusions.

I wouldn’t be short SP, PV, or NP going into this heat. The MidC, maybe, but probably not. I might be tempted to own some spreads, BOM and Prompt, however. Eyes must be focused on the heat and today’s 12Z – does it build or not?