The heat is back, at least in LA, which is where it impacts the WECC the greatest. The current forecast isn’t that mind-boggling 100+ heat, but the trend has been warming, and it wouldn’t take but a few more days of incremental warming to get back to those panic levels. 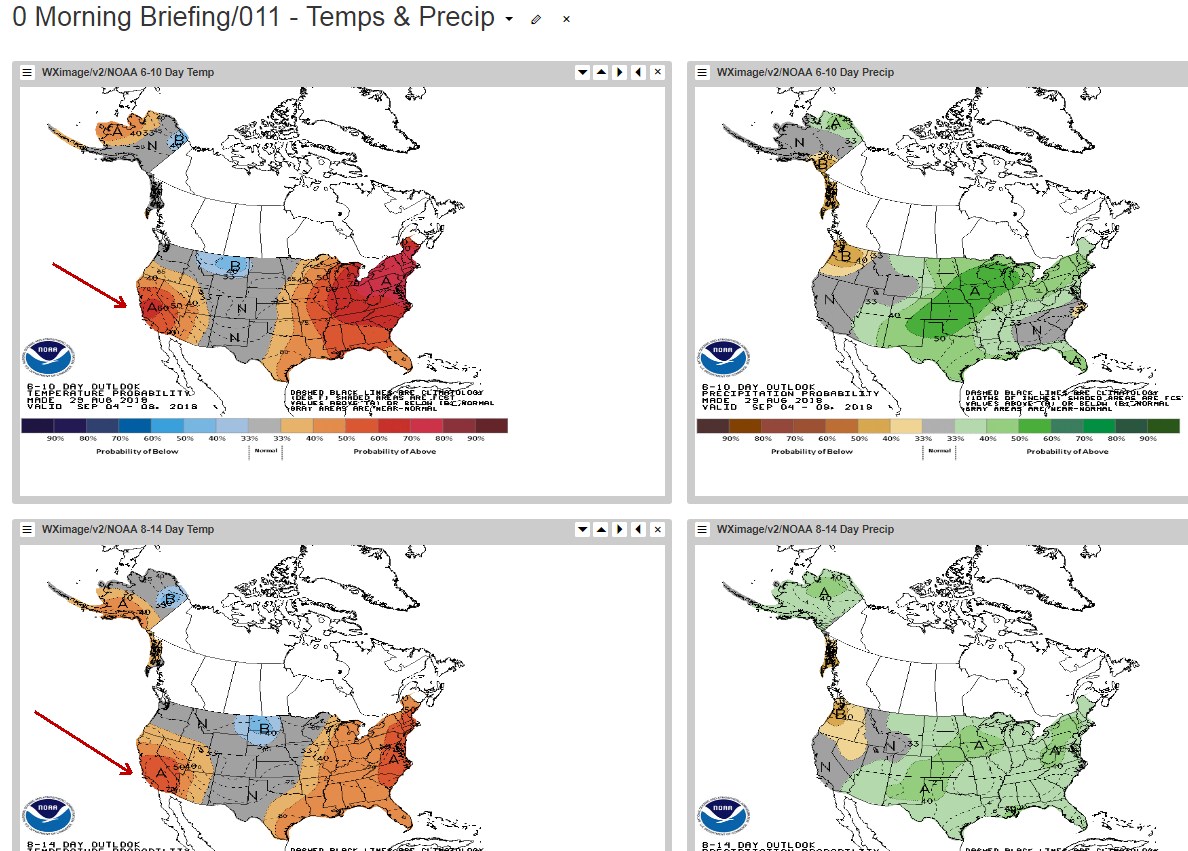 We have combined Precip with Temps since the seasons are changing and our focus on hydro will grow. For now, we aren’t too concerned about precipitation but will still watch it. Back to the heat … 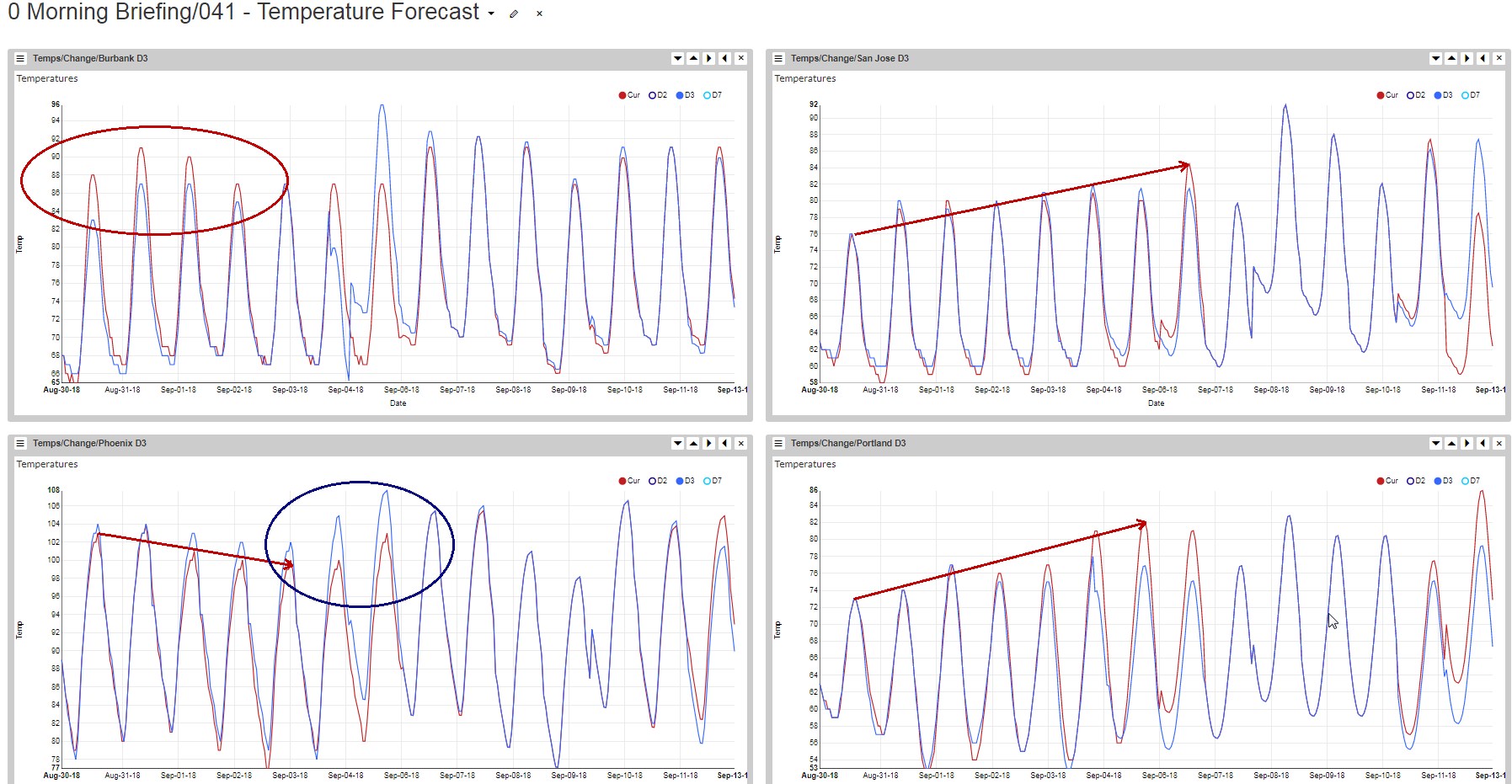 Check out the deltas between today’s Burbank forecast and three days back; those are the values most interesting. The absolutes, 91 high, of course, are relevant, but the trend is too, and that is building. Keep a wary eye on it over the weekend; we will be. 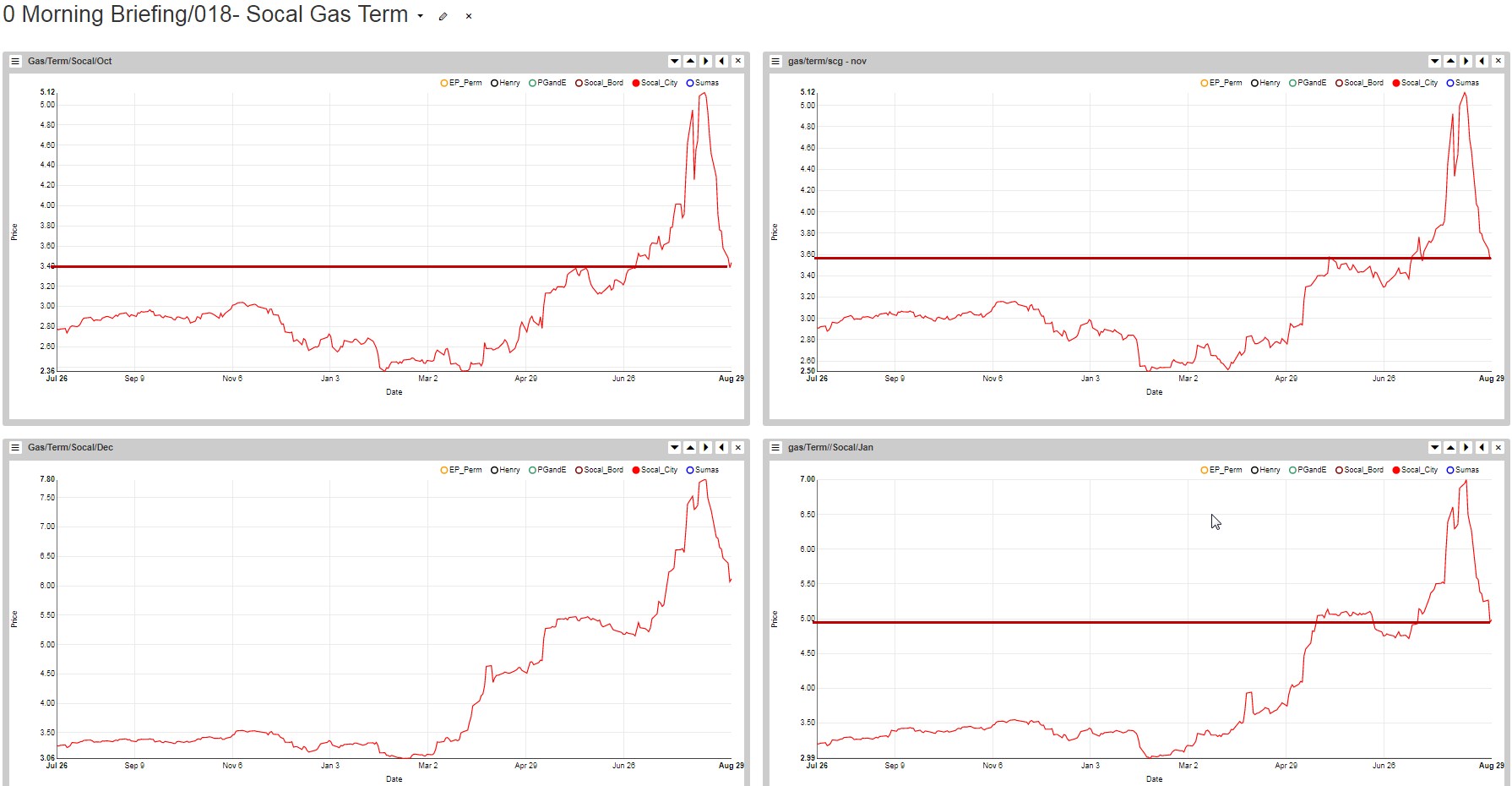 Because, if temps do build in LA, this massive term socal citygate selloff will stop and reverse itself. For now, the entire strip is in a freefall which goes to show how much hype is built into term markets. You’d think after 20+ years of trading the market would be more mature but those charts suggest otherwise. I guess that is because the average tenure of a term gas (or power) trader is about five years; no one can remember what happened beyond that because they weren’t around, they were in drunk in college dreaming of becoming the next Marc Rich. 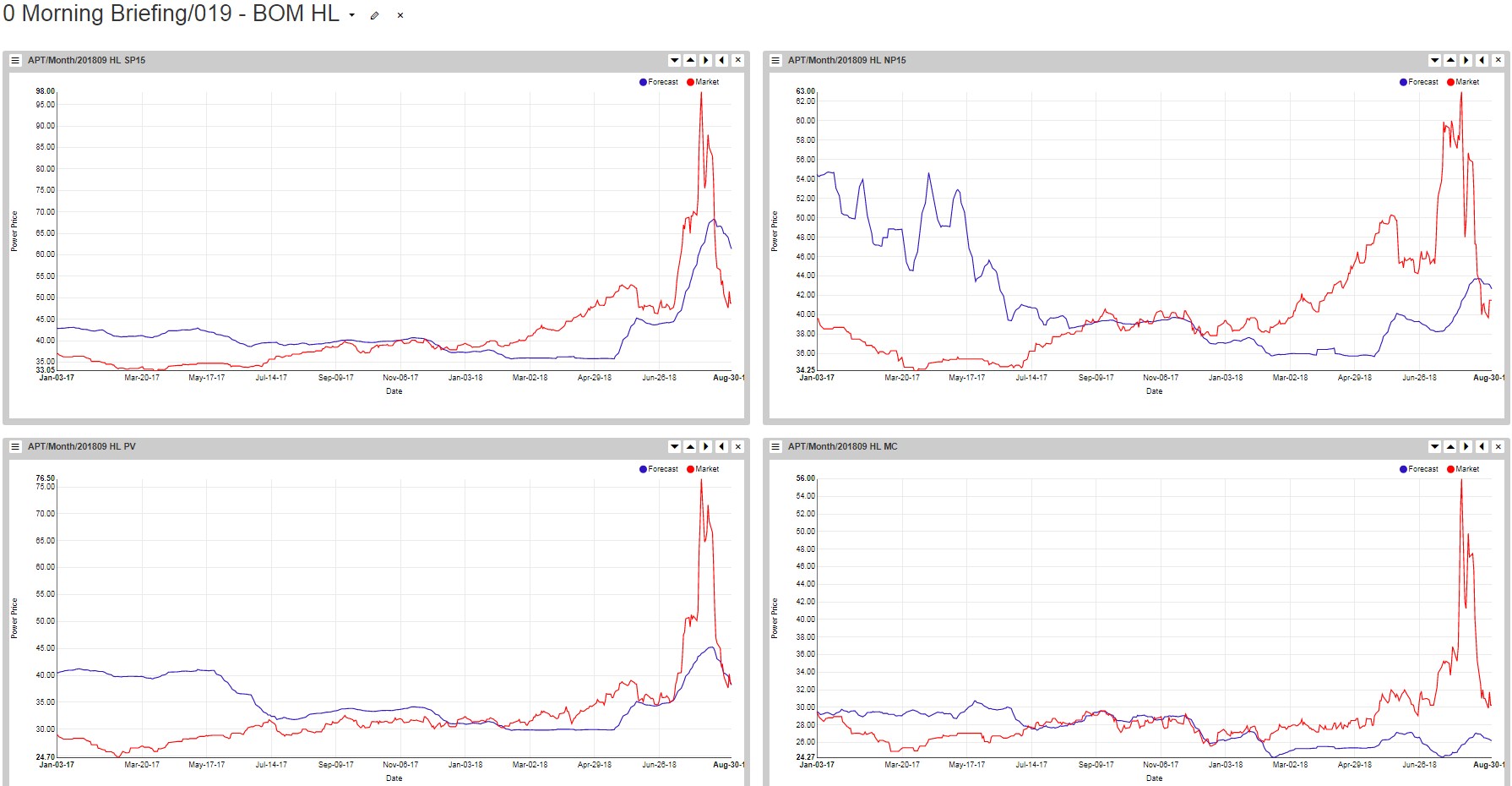 And power follows citygate, everywhere! LOL, you’d think every power plant in the WECC burned citygate gas, but you’d be wrong.  They burn Sumas, Stanfield, Malin, Permian, Cheyenne, Kern Delivery, and PG&E; but they don’t burn Socal Citygate. That is the most astounding takeaway from the 2018 Energy Crisis – the virtual gas pipeline that ties every western price point to Socal Citygate. 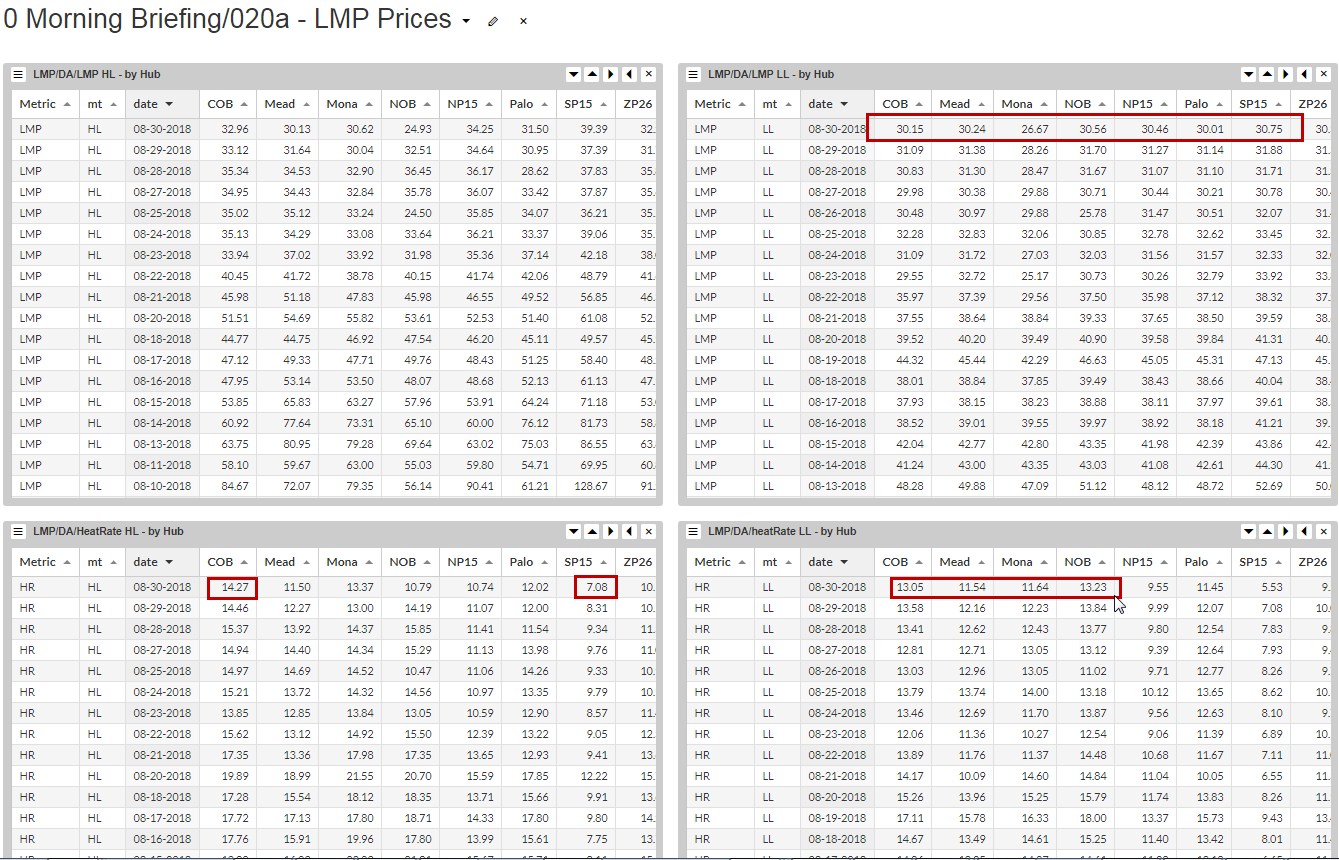 LMP prices are a bust of late, or maybe they are just back to reality. Probably more of the latter than not, though the weather is mild and loads are off, and prices are down. But wait, a ripple was felt yesterday in spot gas. 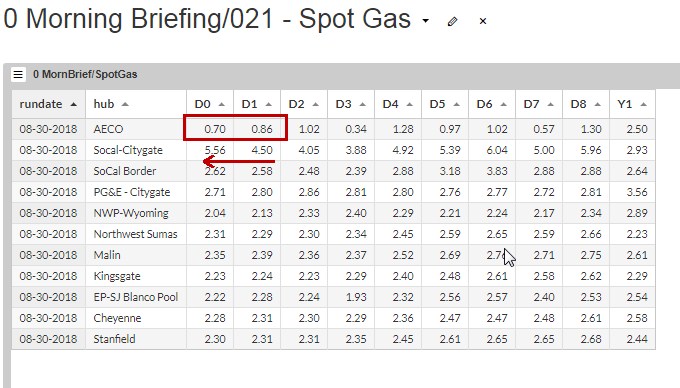 No, not the AECO bust-a-buck price, check out the Buck Rally at Citygate! I’m Baaaaackkkkkk! That off of the return of heat, we suspect. In the pre-Energy Crisis days a dollar rally would be astounding, now you’re so numb to these moves you may not have noticed. Well, start noticing because the moves may get bigger if that heat grows. 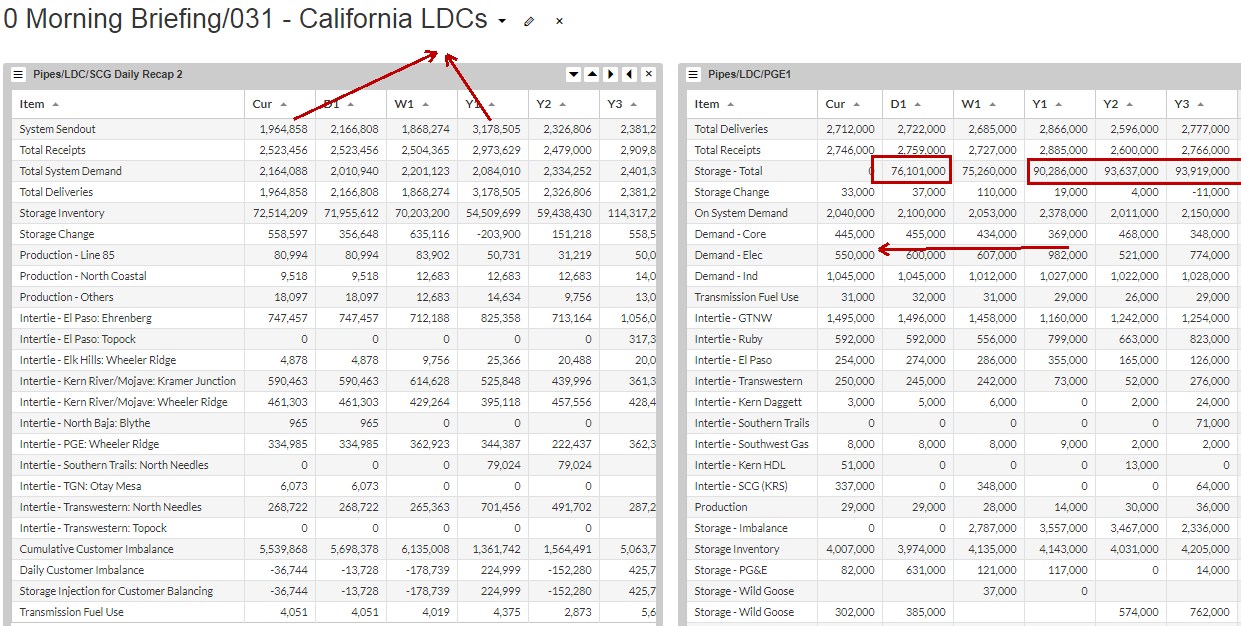 Check out the Socal Sendout last year versus today’s; that’s what happens when LA gets hot. It may be almost September, but that cauldron called LA runs a higher risk of deep heat now than it does in July. Also, take note of Storage in Socal vs. PG&E; the latter is running about 15 bcf behind the three year average. The former is about the same ahead of a two-year average (the Aliso-derate period).  Once the risk of summer heat fades (mid-October?) we think this reverse storage issue will impact term markets; for now, it is overshadowed by the prospects of Socal not serving its winter loads. 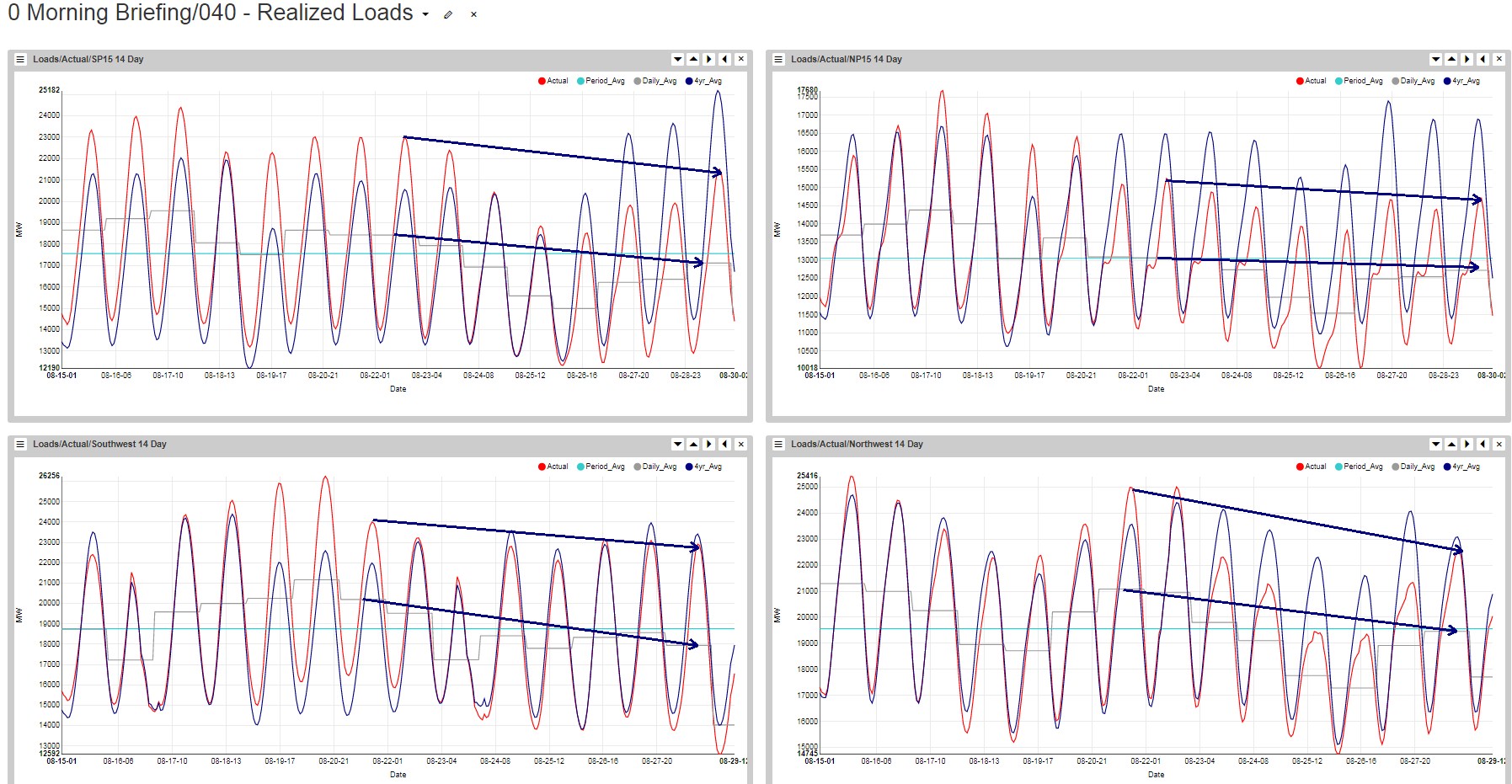 The decay in loads continues, every week it’s off, but that will change in LA and probably Palo, once the heat arrives. 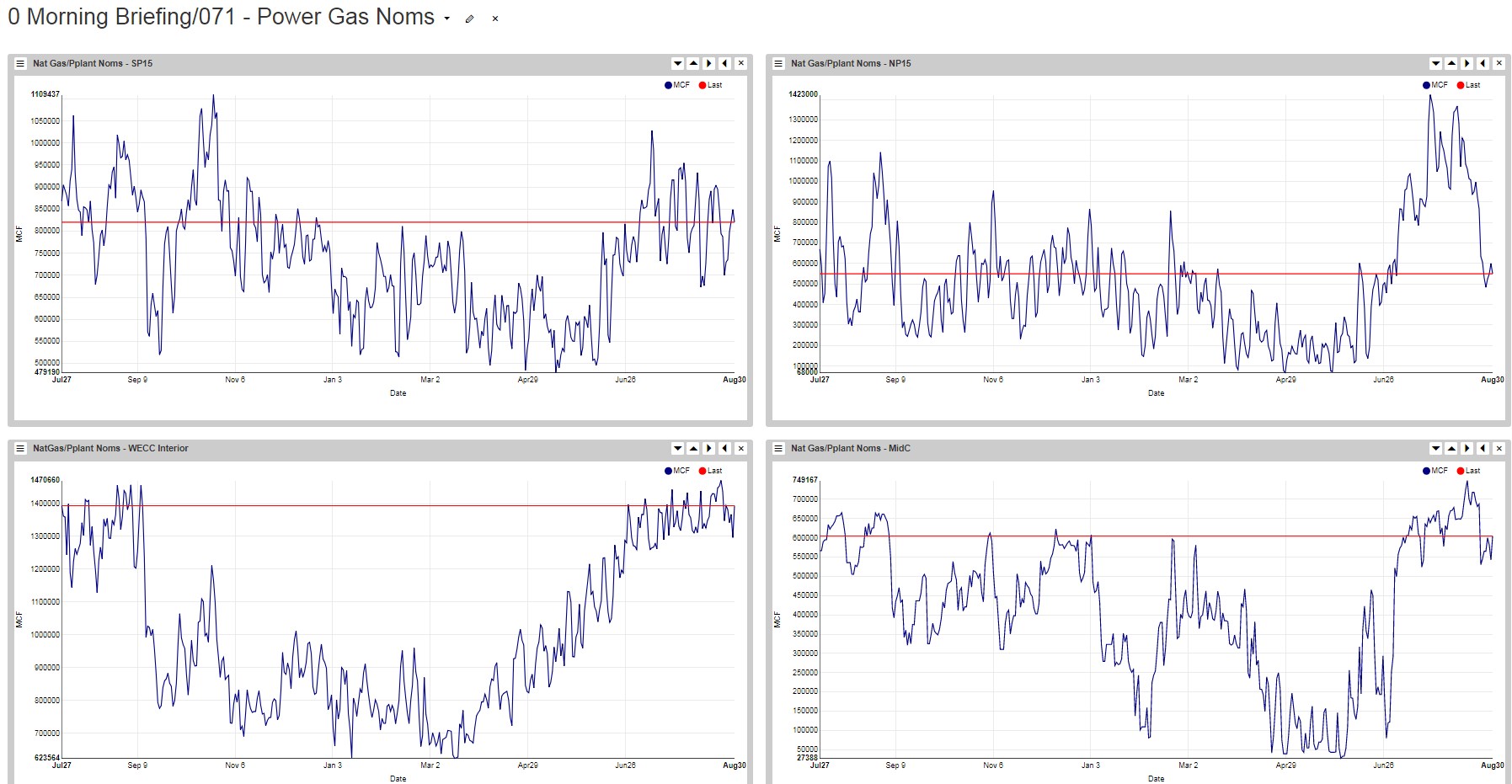 NP and SP’s freefall in gas noms has abated; expect both to rally strong next week. 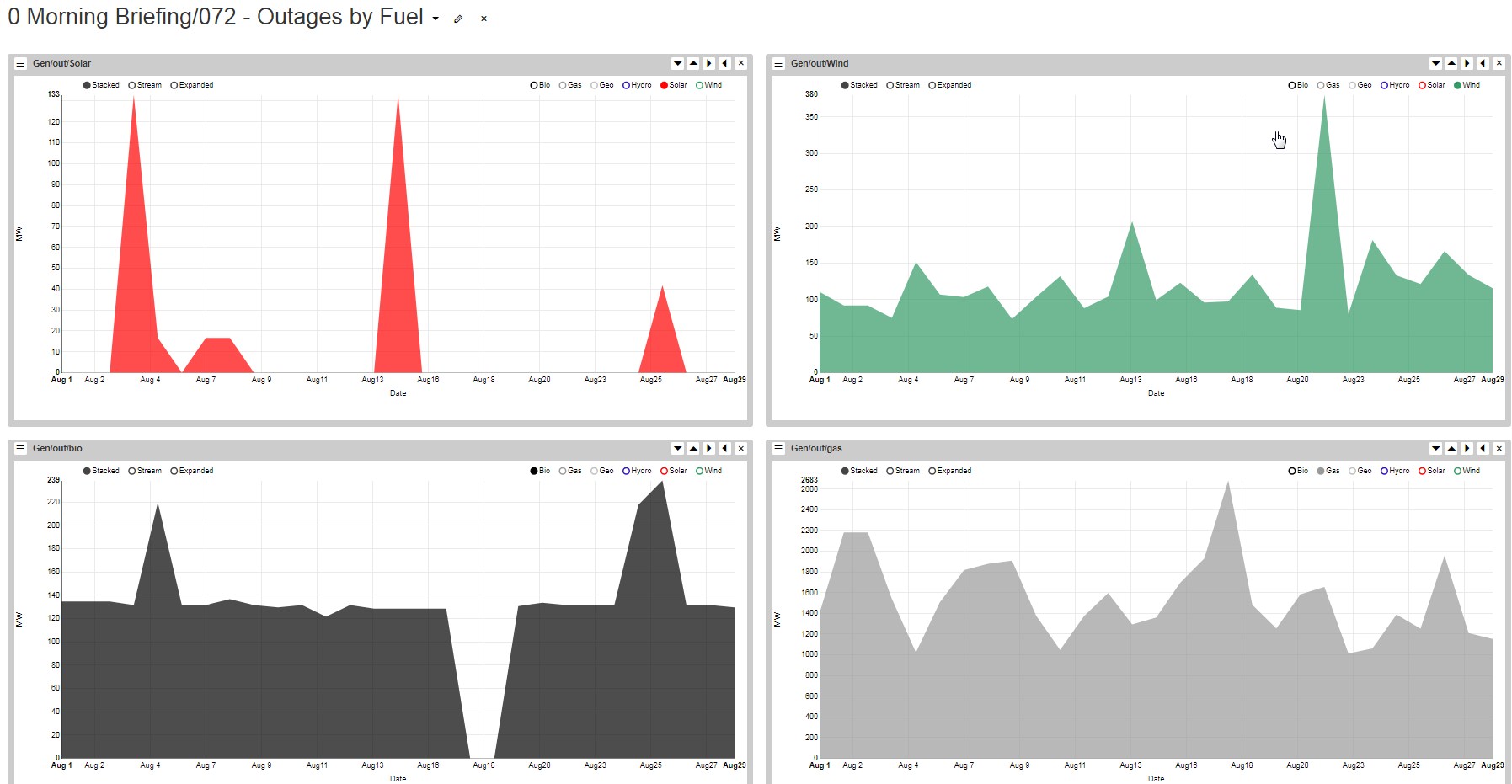 Outages in the ISO remain a non-issue. All the nukes are running making one feel like the cowboys sitting around the campfire saying “it’s too quiet out there” seconds before they all get scalped then barbequed. 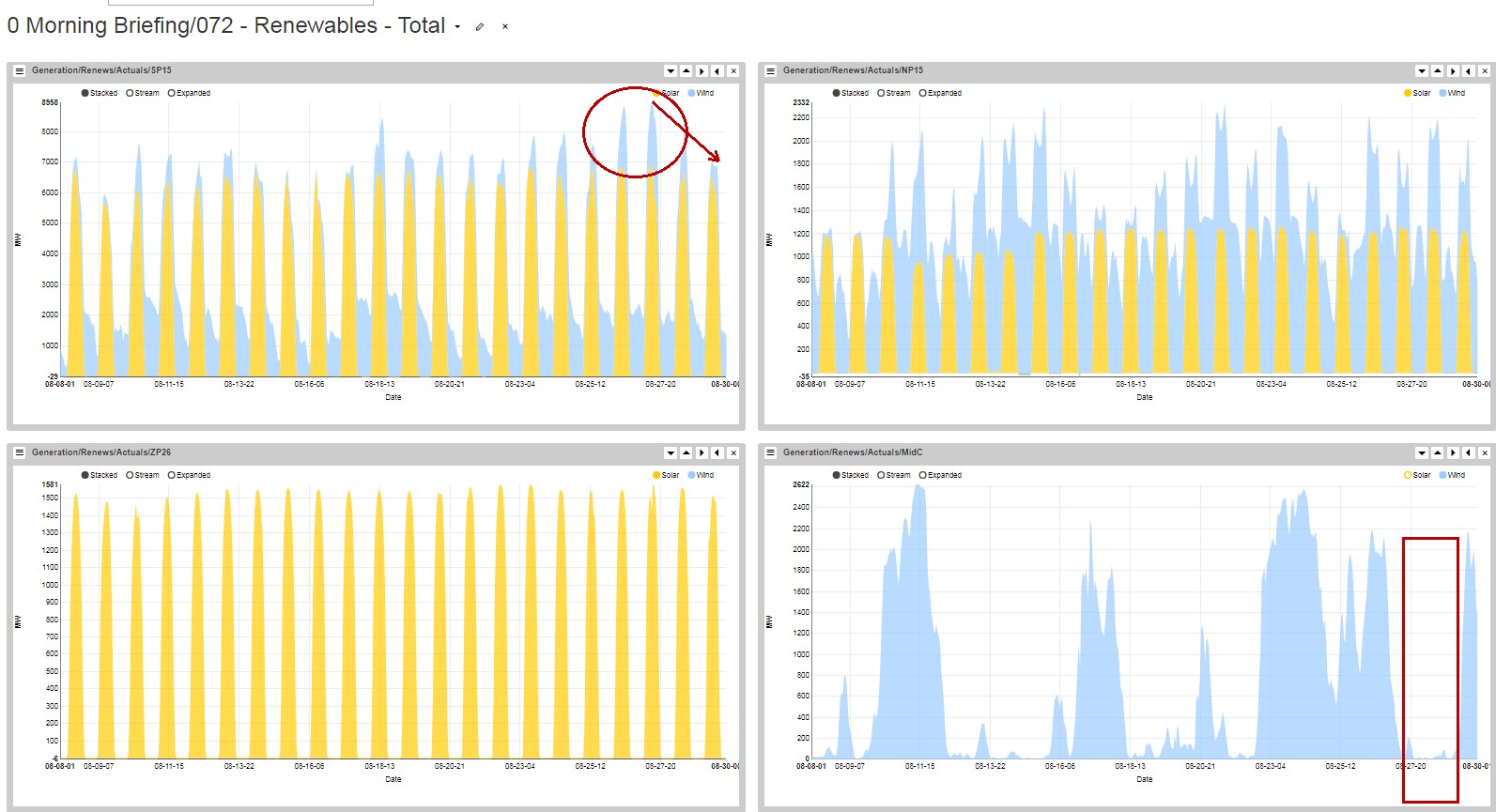 Blame some of SP’s weak prices on renewables, Monday and Tuesday set summer highs . MidC’s wind remains on/off; was on yesterday and off Mon-Tues.

Told you we were starting to look at water; the Northwest gets a smattering next week. Not enough to change streamflows, but this is the biggest dump since spring. Not sufficient to saturate the ground, but its a start.

Lots of changes afoot in the regulated BC Hydro reservoirs, all triggered off of declining loads and the anticipation of Spill Abatement on Saturday. BPA doesn’t need the water; they survived summer.

All of that CFS going over the spill gates could be shifted to the turbines starting on Saturday. It won’t; most will just stay above the dam, filling the reservoirs or, more accurately, not drafting the reservoirs. That said, the return of this water for energy is a big deal; BPA’s bullets just doubled in an emergency. 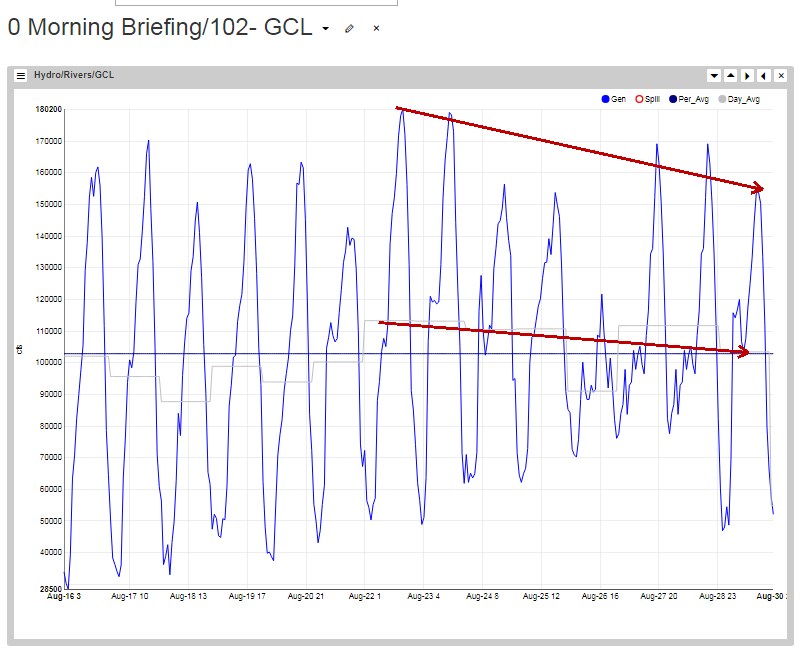 There is no volatility, day to day, in Coulee’s generation. Compare the Period Average line (Black) to the Daily Average line (gray); very tight all of which says things have grown soft in the Northwest. BPA has no problems serving load. 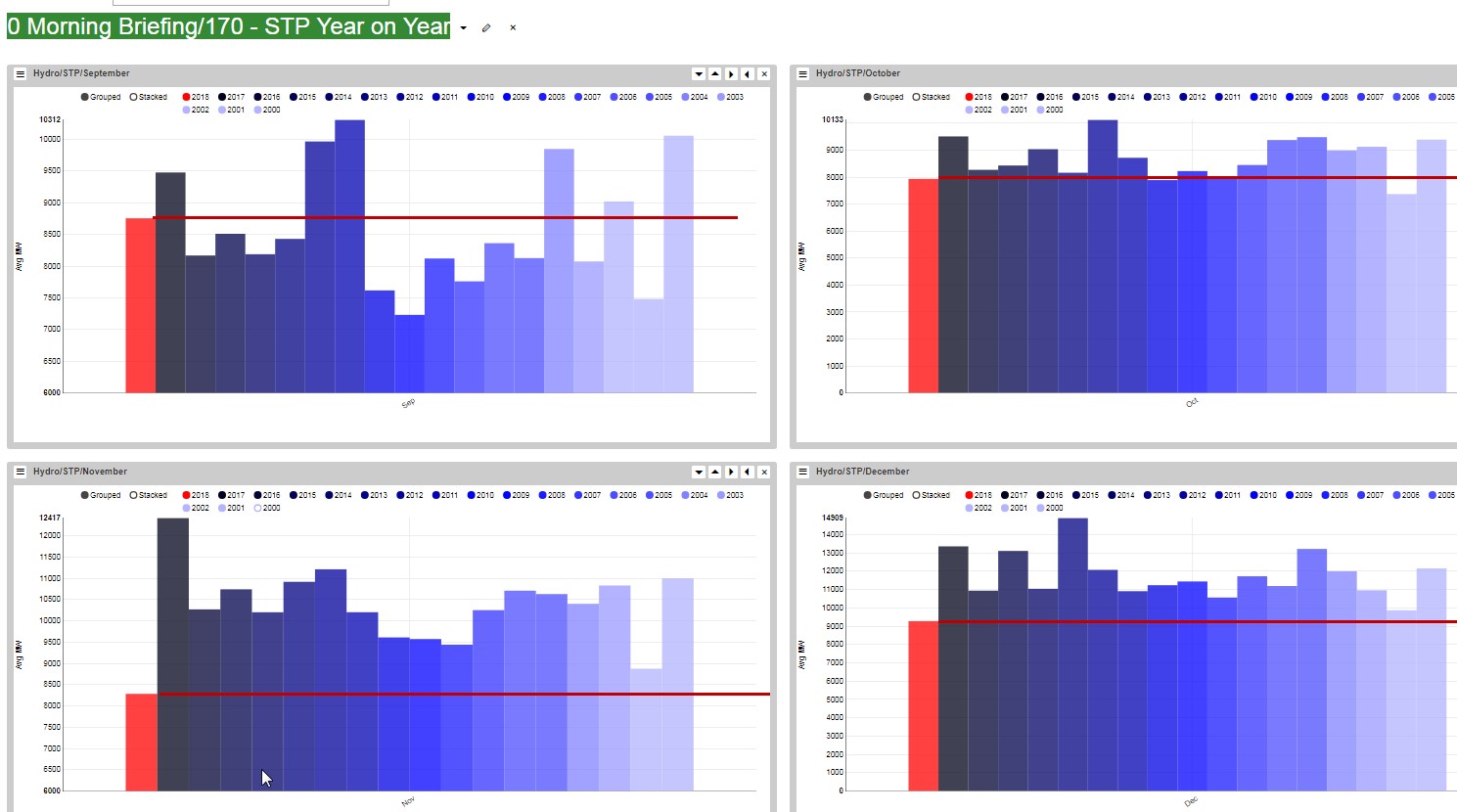 We still don’t get the NWRFC’s November and December forecasts; both are projected to come in at 20-year lows. Huh? We understand, the reservoirs were pulled to serve big summer loads, it was a mini-Energy Crisis. Still, reservoirs are not that low, in fact, they are just average. 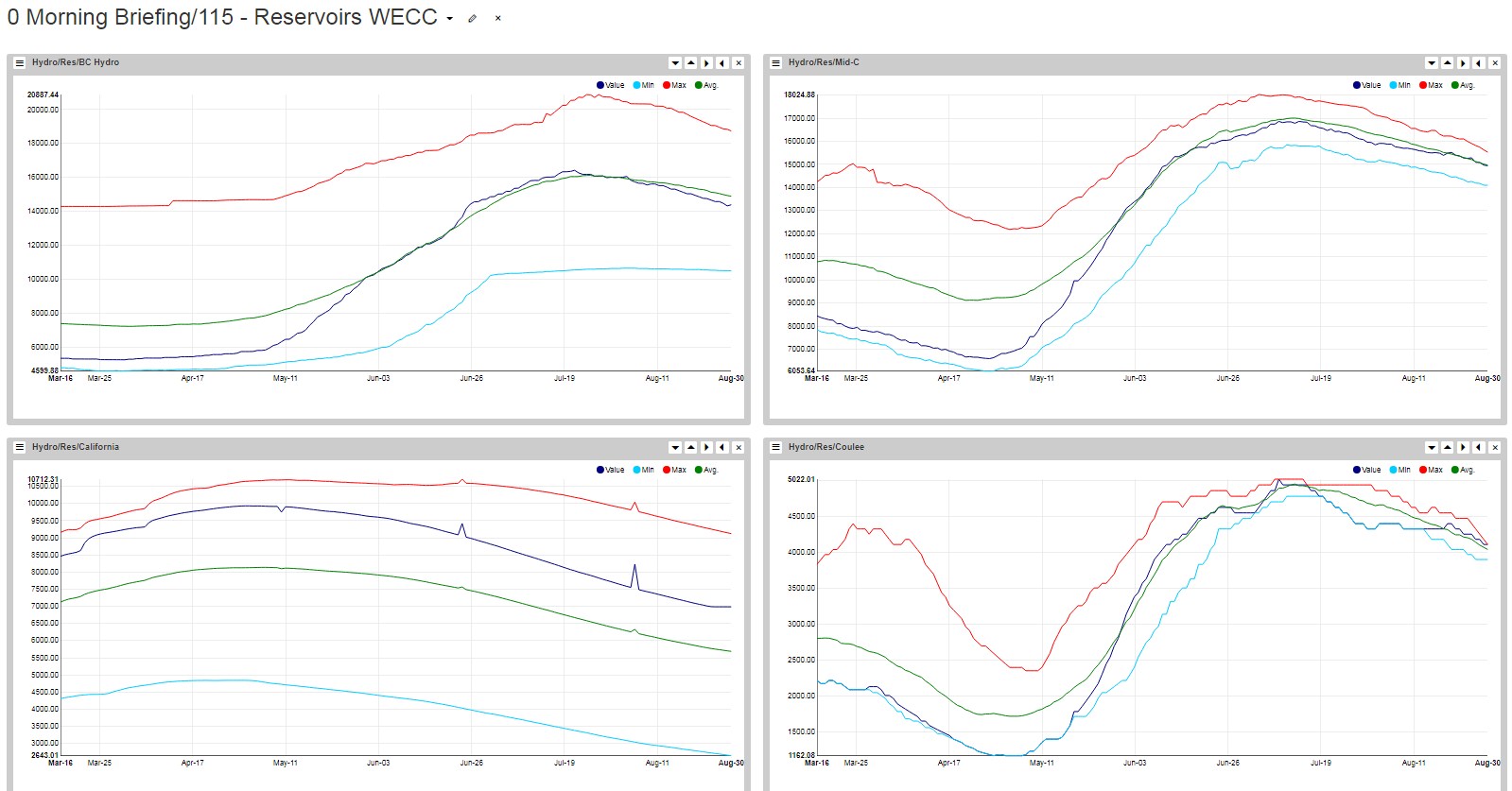 BC is off a bit, but I’d call that rounding error. Contrast today versus the low; it’s like 3 MAF higher. And the US Northwest is precisely at the average which is a 1 MAF above the minimum. No, these storage levels do not support those Nov-Dec STP forecasts; we are convinced they will be radically revised upwards. 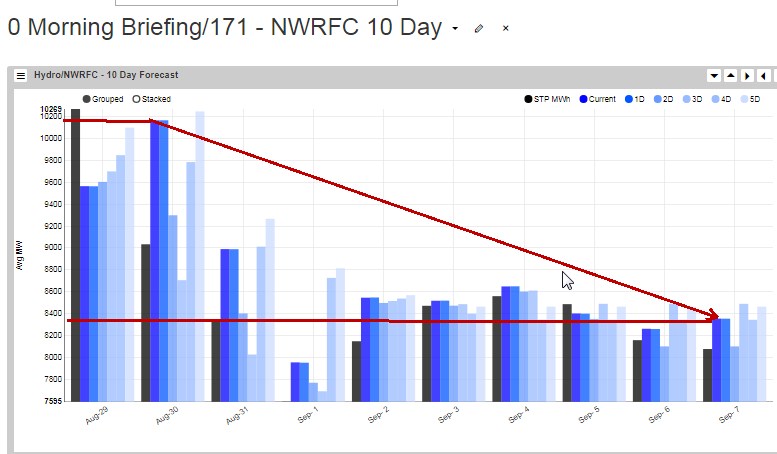 The 10 Day is poised to slash total water but only because Spill goes away; water through the turbines (QG) won’t change, or if it does most likely will go up. The above plot merely reflects NOT wasting water on fish. 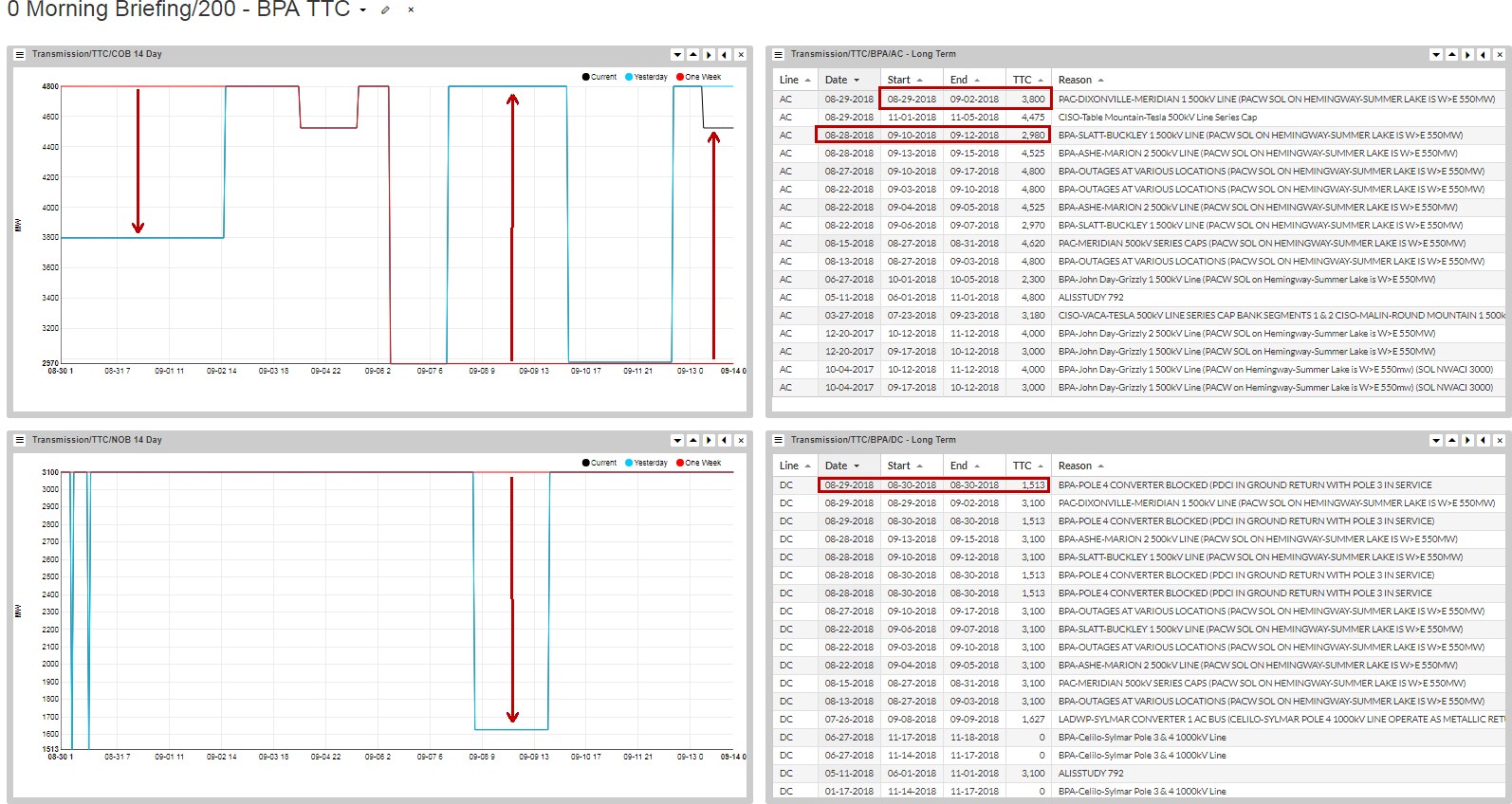 Look at the direction on the Northern Intertie, just to show how weak the Northwest is. Plus, the DC is hitting TTC on many hours, and the AC even blew past TTC for a few hours yesterday. Now Path 15 is northbound nearly every hour, and even Path 26 is flowing North more than south.

Cheap often means buy, cheap coupled with growing bullish fundamentals means buy even more. We’d be long in the south off of a heat lottery ticket which means we’d be long everywhere because it doesn’t matter what a non-SP hub’s internal fundamentals are in this new world. If SP blows up, so shall the rest of the WECC.

Final thought for the day, check this one out. 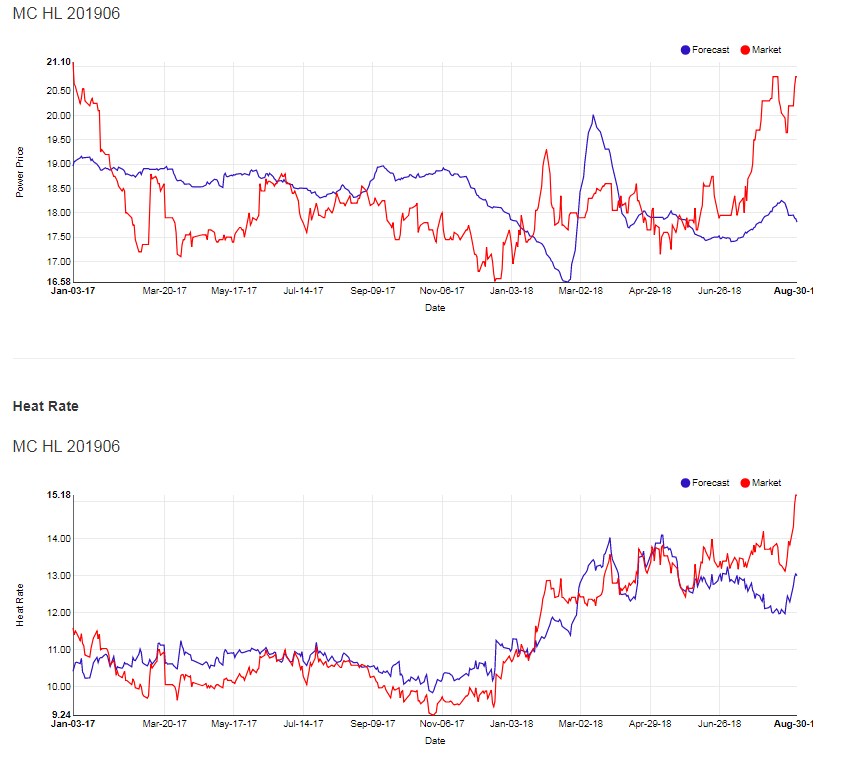 The market has taken a shining to June MidC. Whoa, June? We guess its all about El Nino… 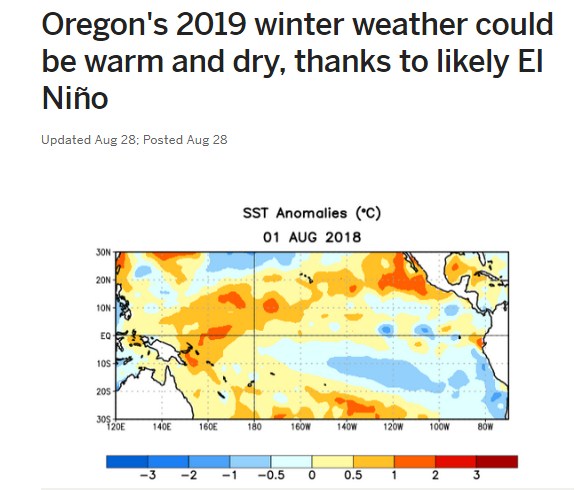 Sorry, that is one of the weakest equatorial anomalies we’ve ever seen associated with El Nino. Sure, it will build, but to jack June up to a 15k heat rate off of that?