We mentioned a few weeks back that the market was teed up for one of the greatest short opportunities of all time, and it was. The plunge has been epic, take a look at the MidC Sept:

That’s heat rate; price looks the same (gas didn’t ever move in the NW). The prompt is now back to the same heat rate we last saw in January, it hasn’t been this cheap in eight months. I know the lights are blindly bright, everyone’s doe eyes are locked onto the freefall, and no one will push that “BUY” button, but perhaps you should. The MidC remains squeaky tight despite that half inch of rain forecasted to wash the smoke particles from the air. Where three weeks ago  was a once in a lifetime short, today is just a good solid buy. Downside is limited and so might the upside … unless LA gets blasted with some more 100-degree heat. Than that contagion of price will return, and those $20/mmbtu Citygate prices will seep north.

But, we see no signs of that 100-degree heat in yesterday’s forecast. 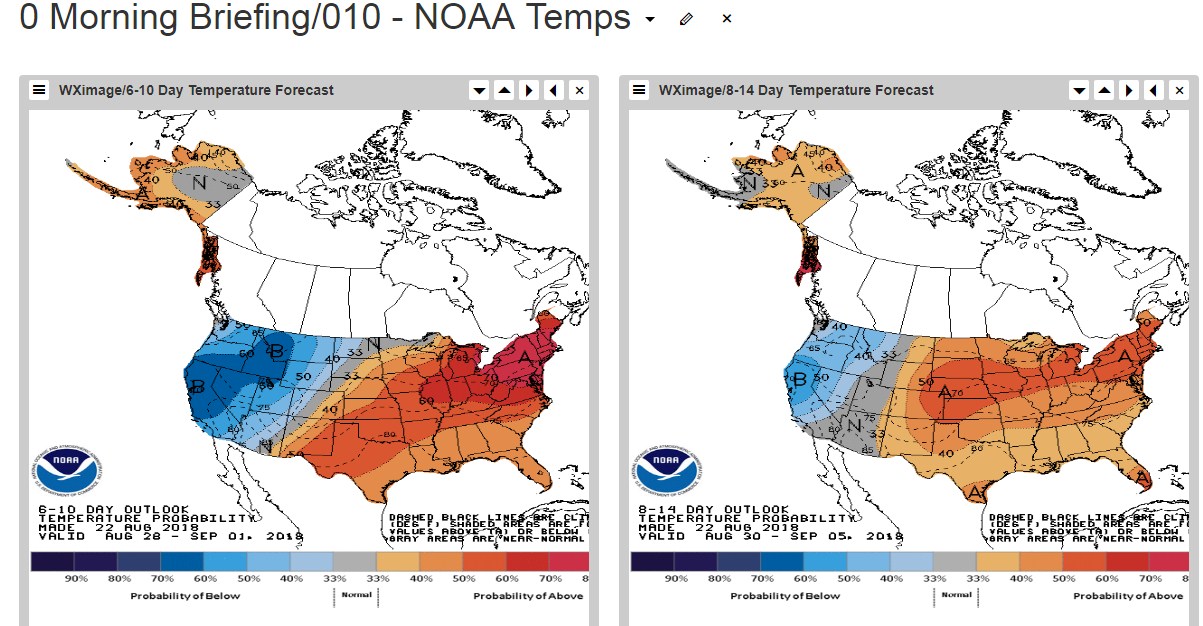 Just below average for the next two weeks which is precisely why you can get long at such an attractive price. The Northwest gets a bit wet.. 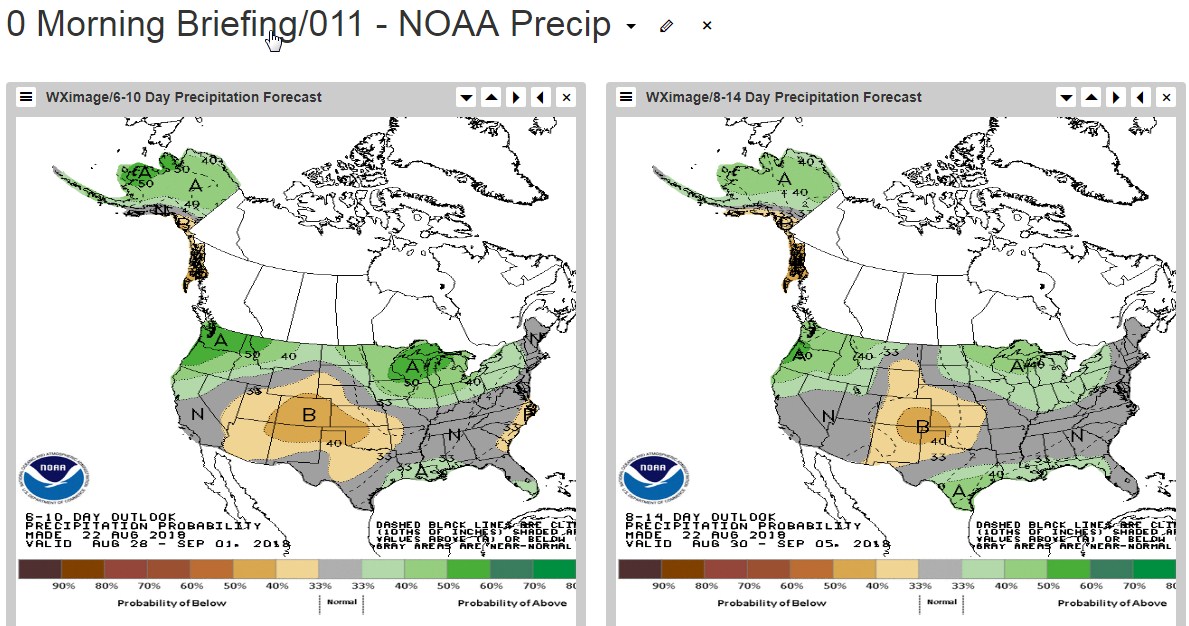 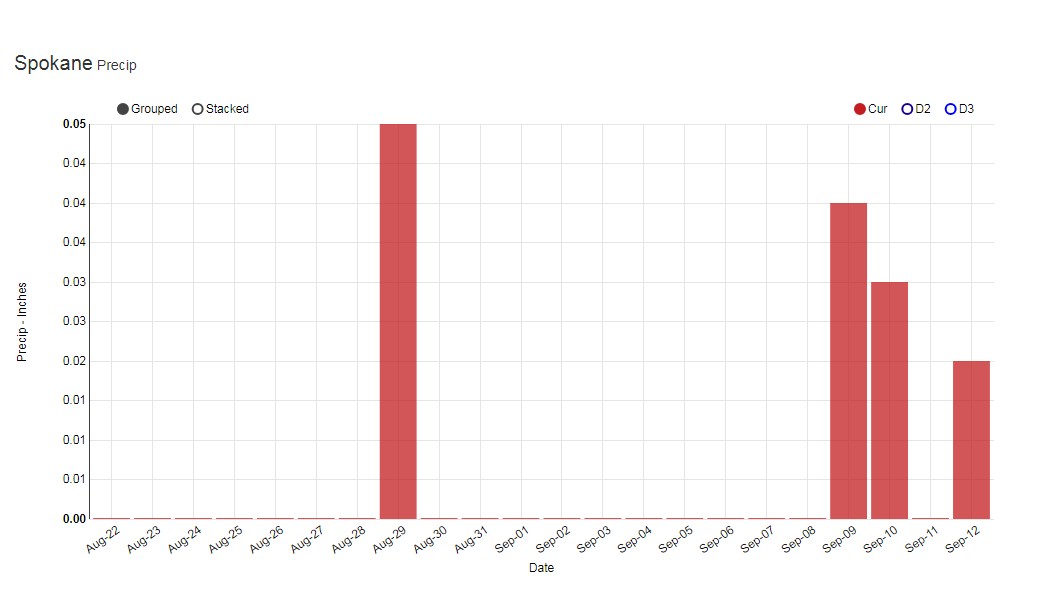 Until you measure it in inches, then you realize the east side MidC gets a whopping 0.05″ of rain, not enough to create a single mud puddle. The ground is so dry after twelve weeks of draught that even an inch wouldn’t matter, but this is just a twentieth of an inch. 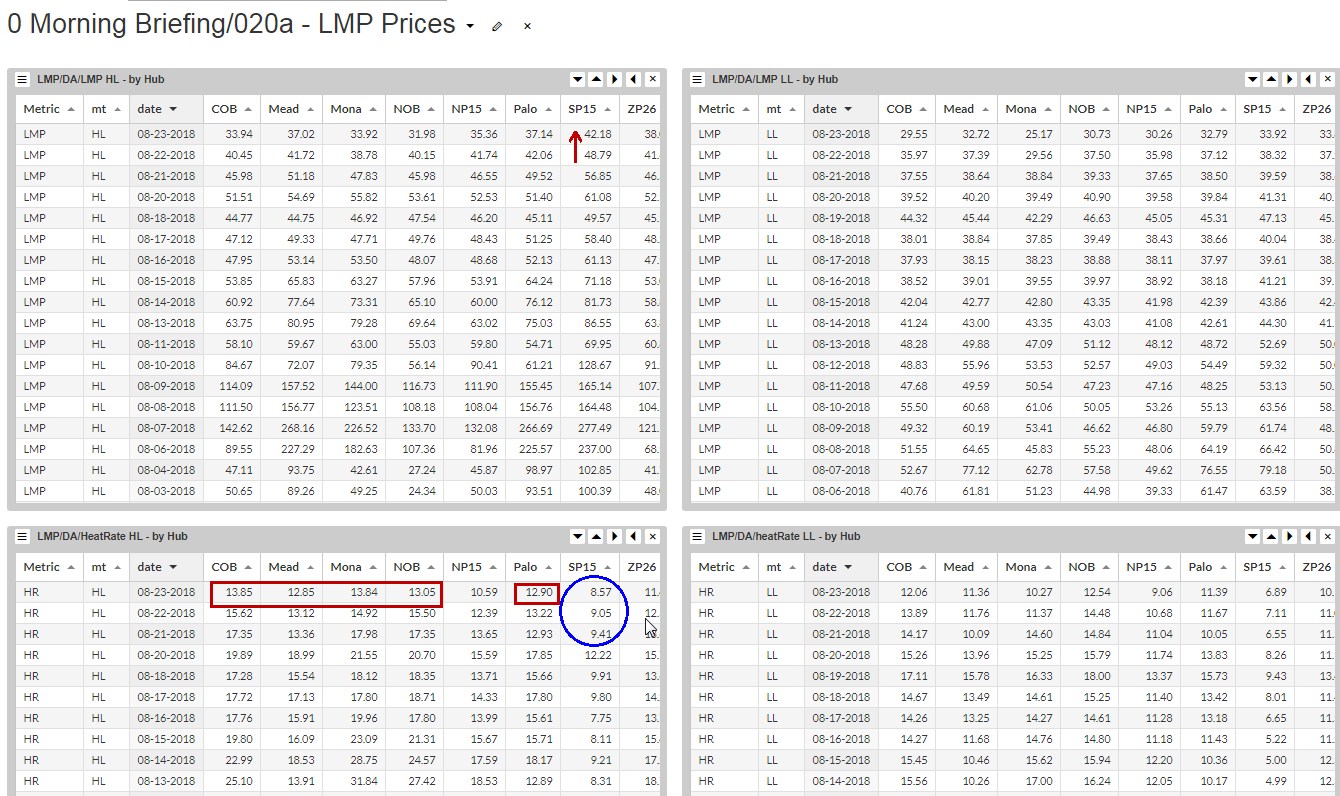 The LMPs are still tanking, and the weather will grow cooler so we doubt cash stages a rally any time soon which is why you can get long at such a low price. Heat rates are holding up, though, and are trading more at a hot level than not, reflective of how tight thing still are. 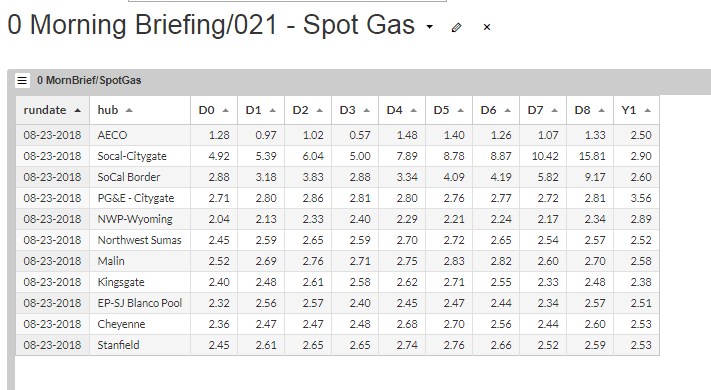 Even with Burbank in the 80s, Citygate still commands a $2.00 premium to PG&E; even Border trades at a premium. The Citygate term  gas continues to freefall. 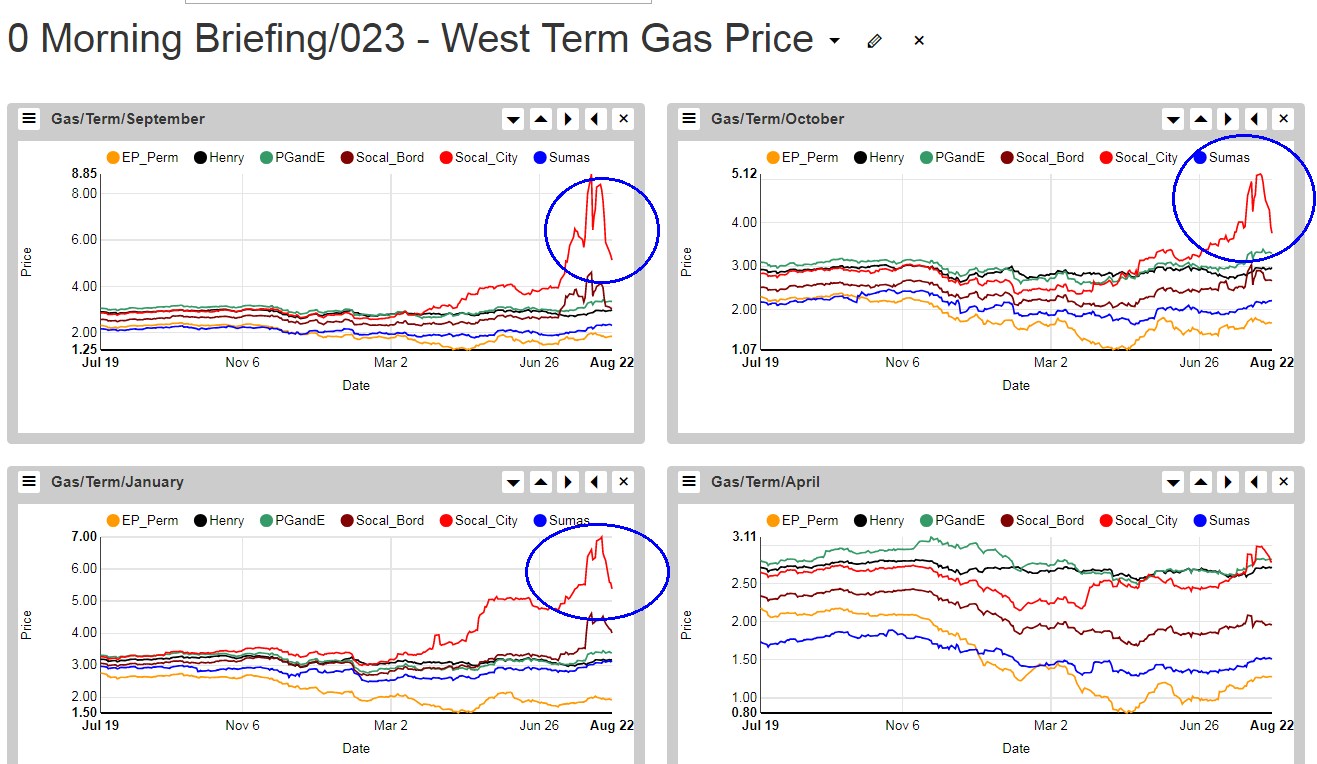 What’s changed? Nothing in Socal’s outage plans, I guess the delta from peak to today was called “hype,” kind of like the power hype. Shows how irrational markets behave in times of stress.

What remains, after a time of stress, are the dents in storage. Check out PG&E’s levels; they are fifteen bcf behind the last three years while Socal is ten ahead of last year. 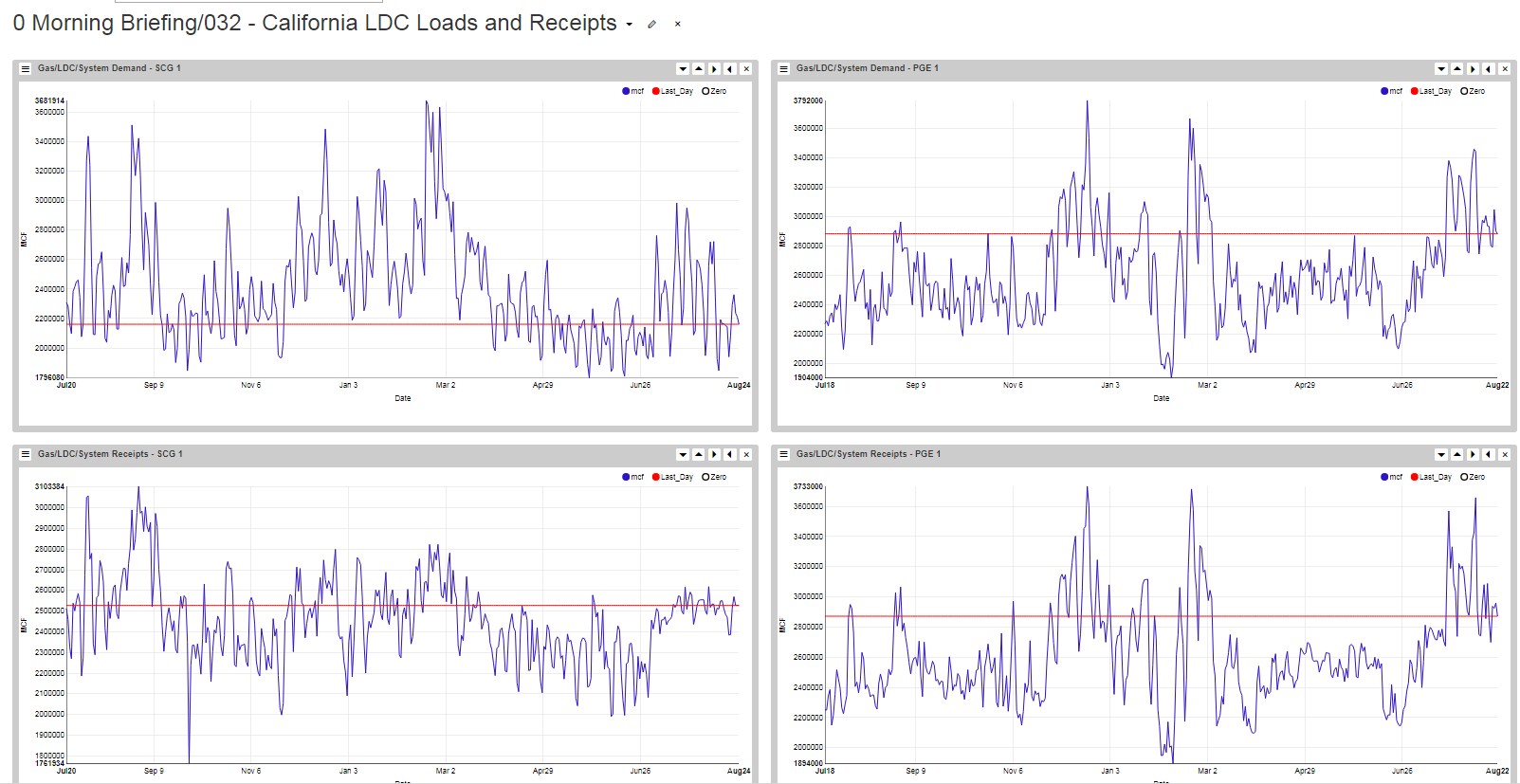 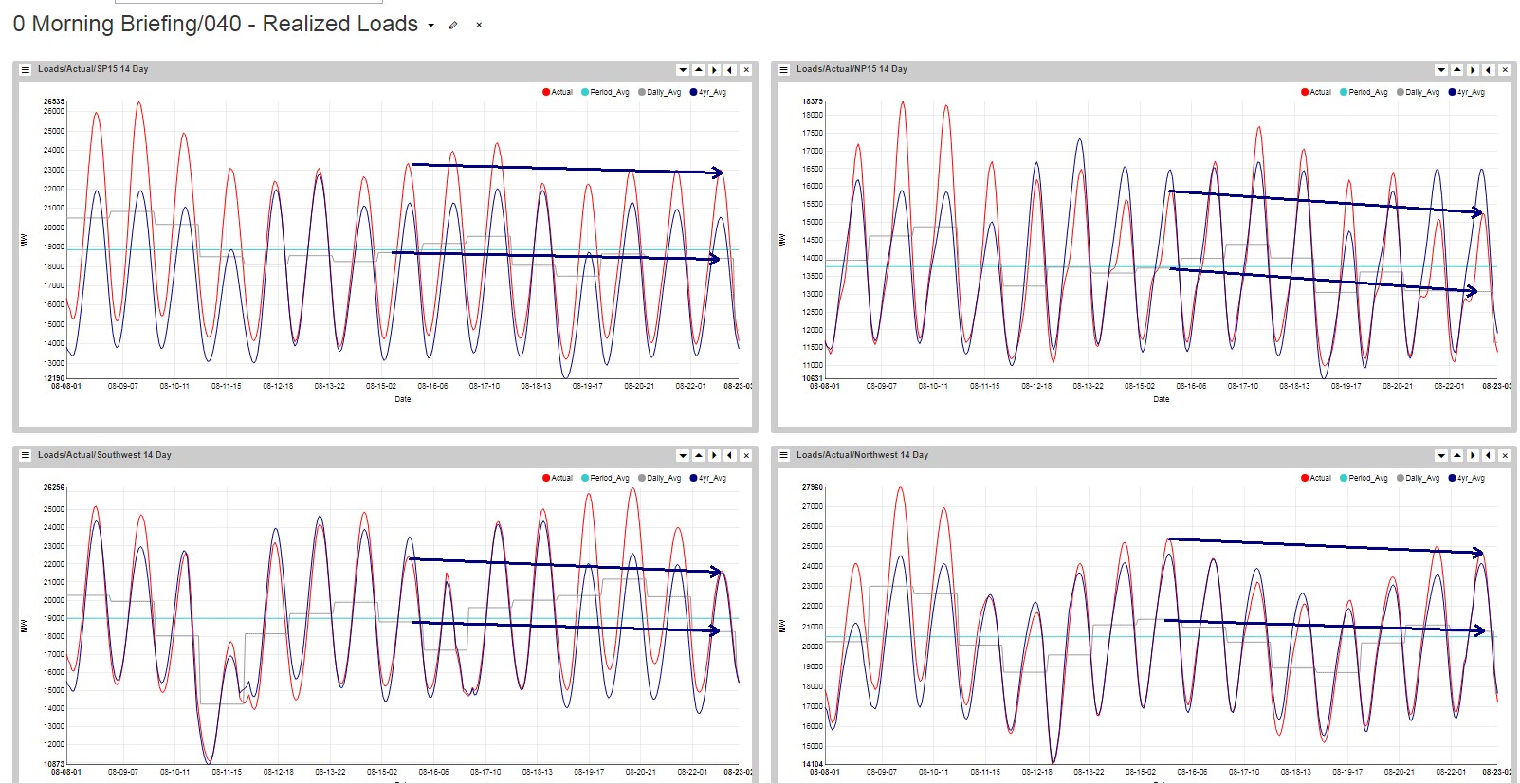 Realized power loads are off at all four hubs. Let’s look to see where they’ll go in the future. 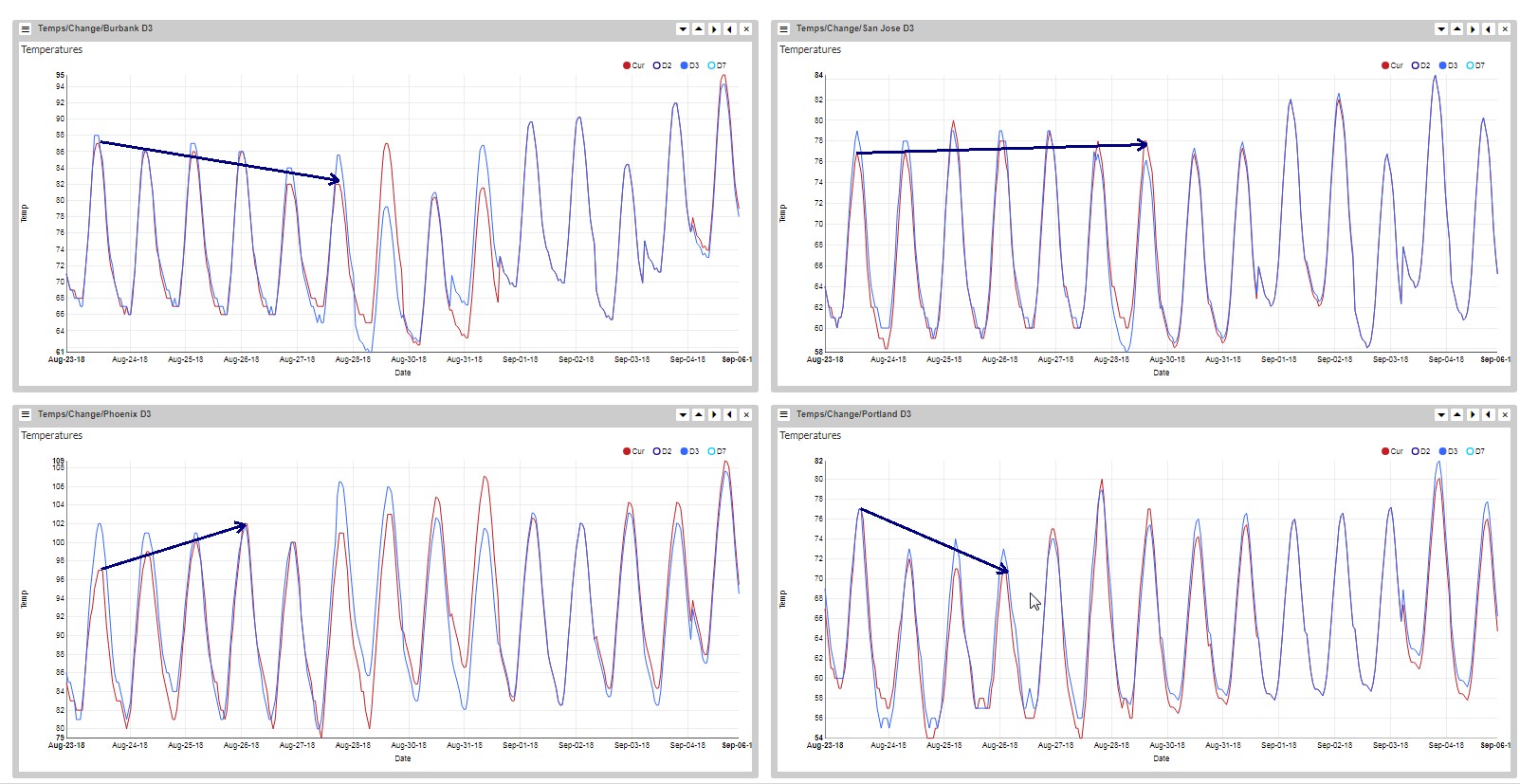 SP grows a bit cooler, NP is sideways, Palo is hotter, and the Northwest cools off. None of these forecasts are radically different than today. 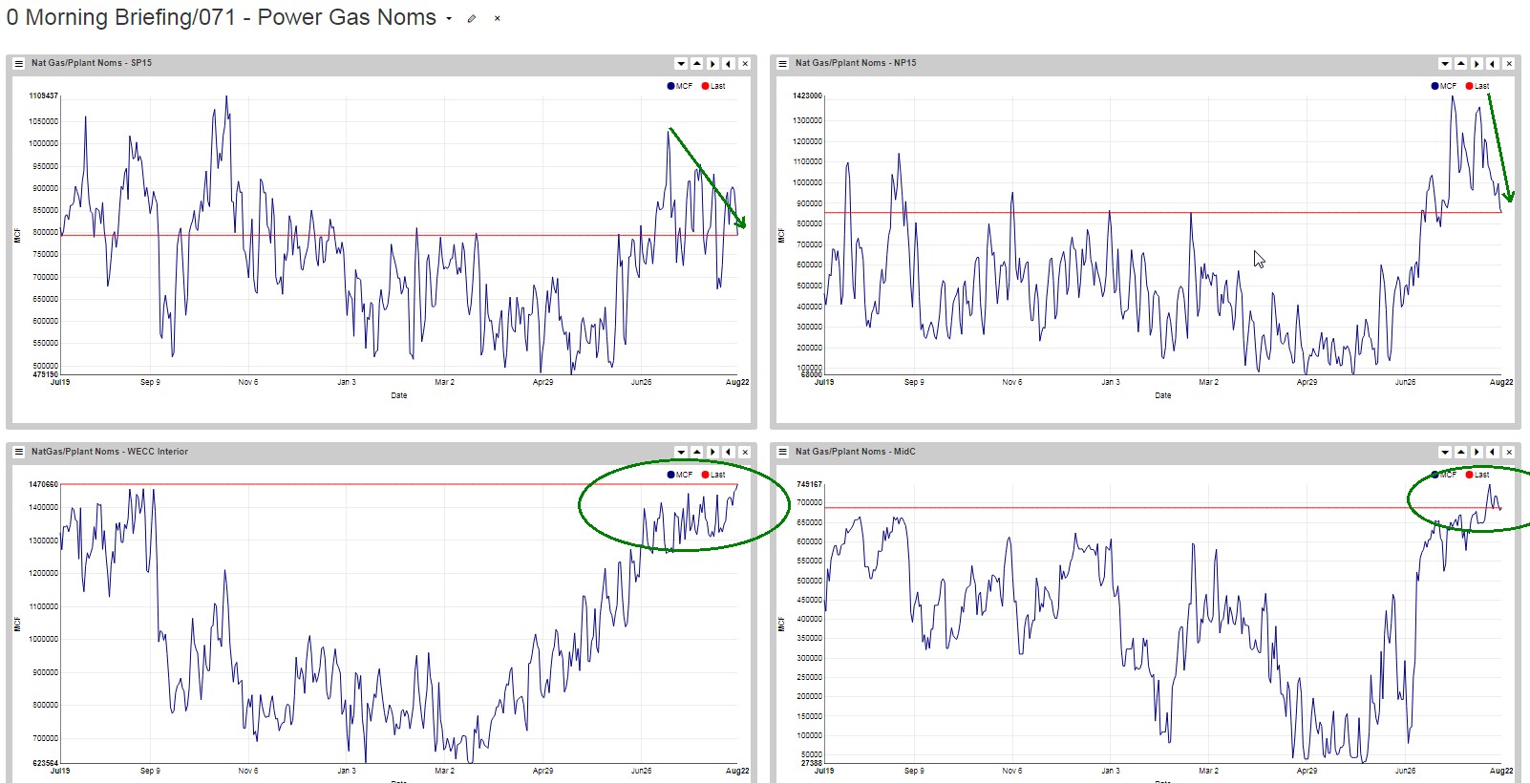 Both NP and SP’s gas noms are off, but not so at Palo and the MidC. Let’s look closer at the latter. 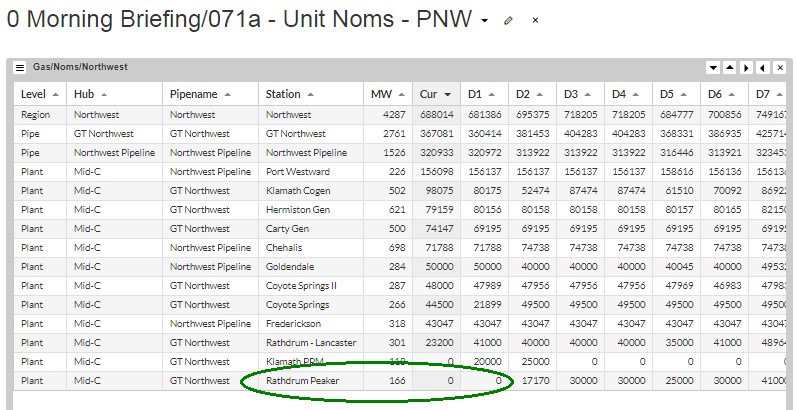 Everything is running but Avista’s Rathdrum peaker. Doesn’t look that bearish to me? 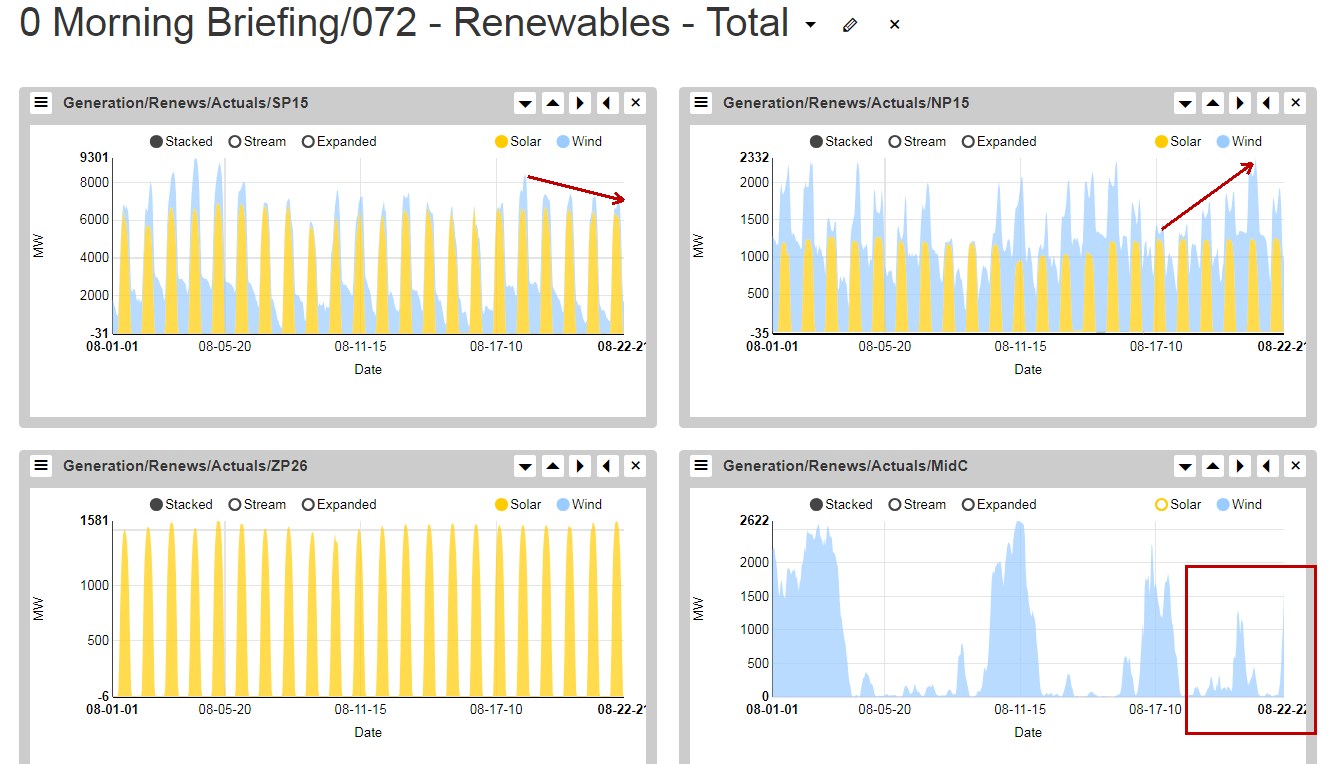 Some of the MidC strength is due to the unreliability of wind energy, production of that resource has been weak.

Our forecast shows a rally in wind energy over the weekend and spilling into Monday but after that it’s about the same as yesterday. 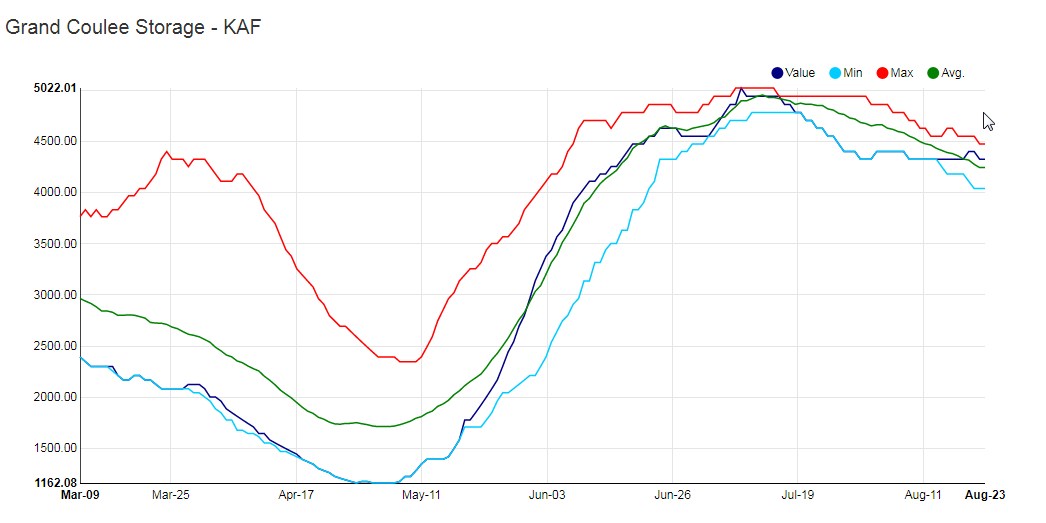 BPA has Coulee above average, just barely. They have drafted Arrow to get there.

Another sign of weakness is discharge on the Peace is way off; the plant was baseloaded last week, now it’s weakly cycling. 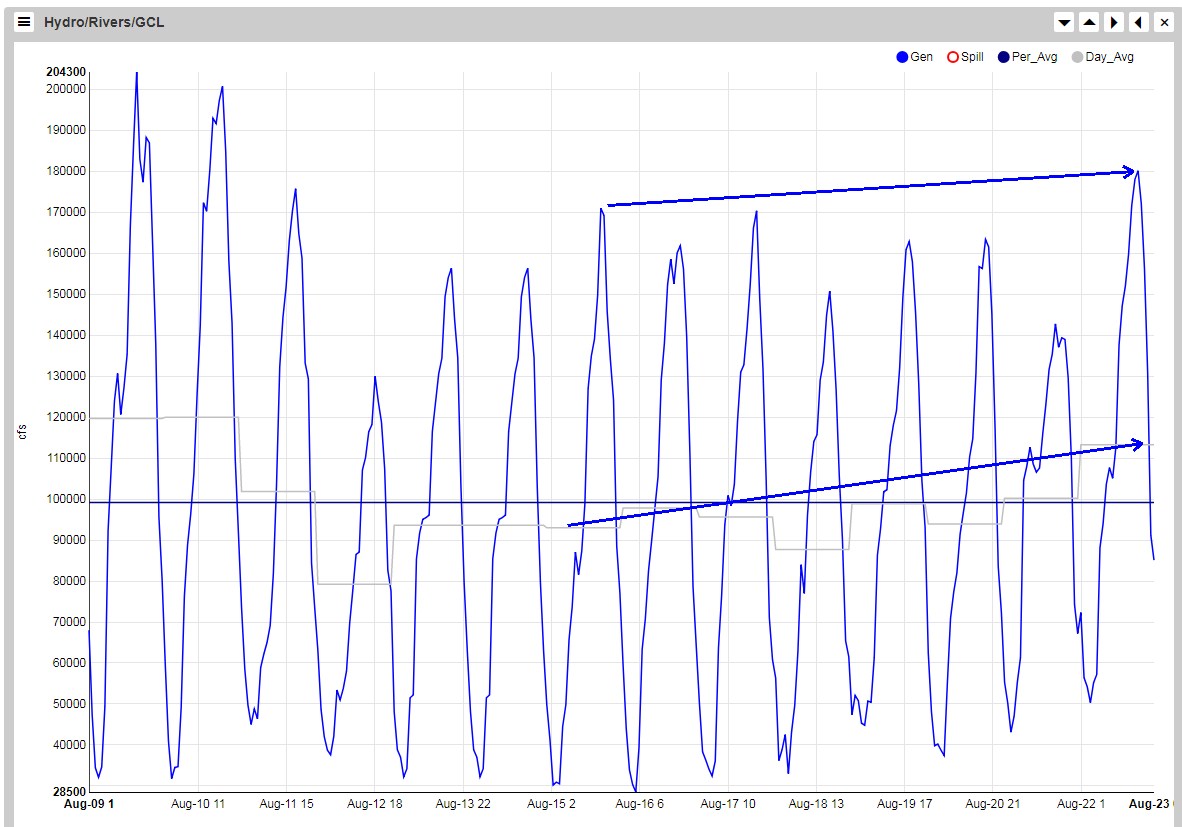 Flows out of Coulee have rallied week-on-week and day-on-day. In nine days spill ends, that will add to net energy, we think, given how low flows are today. There isn’t much QG to cut, so cutting spill should increase production. 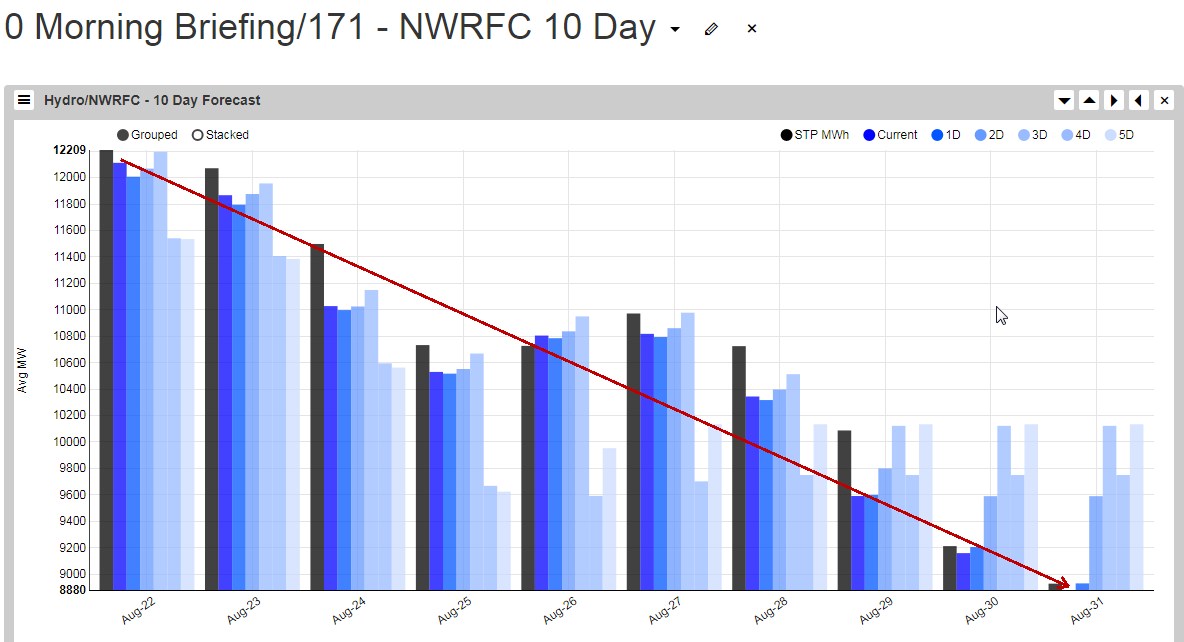 The RFC’s 10 Day has things tightening up, now they are forecasting into the post-spill period. Most likely these cuts simply reflect the end of the spill. 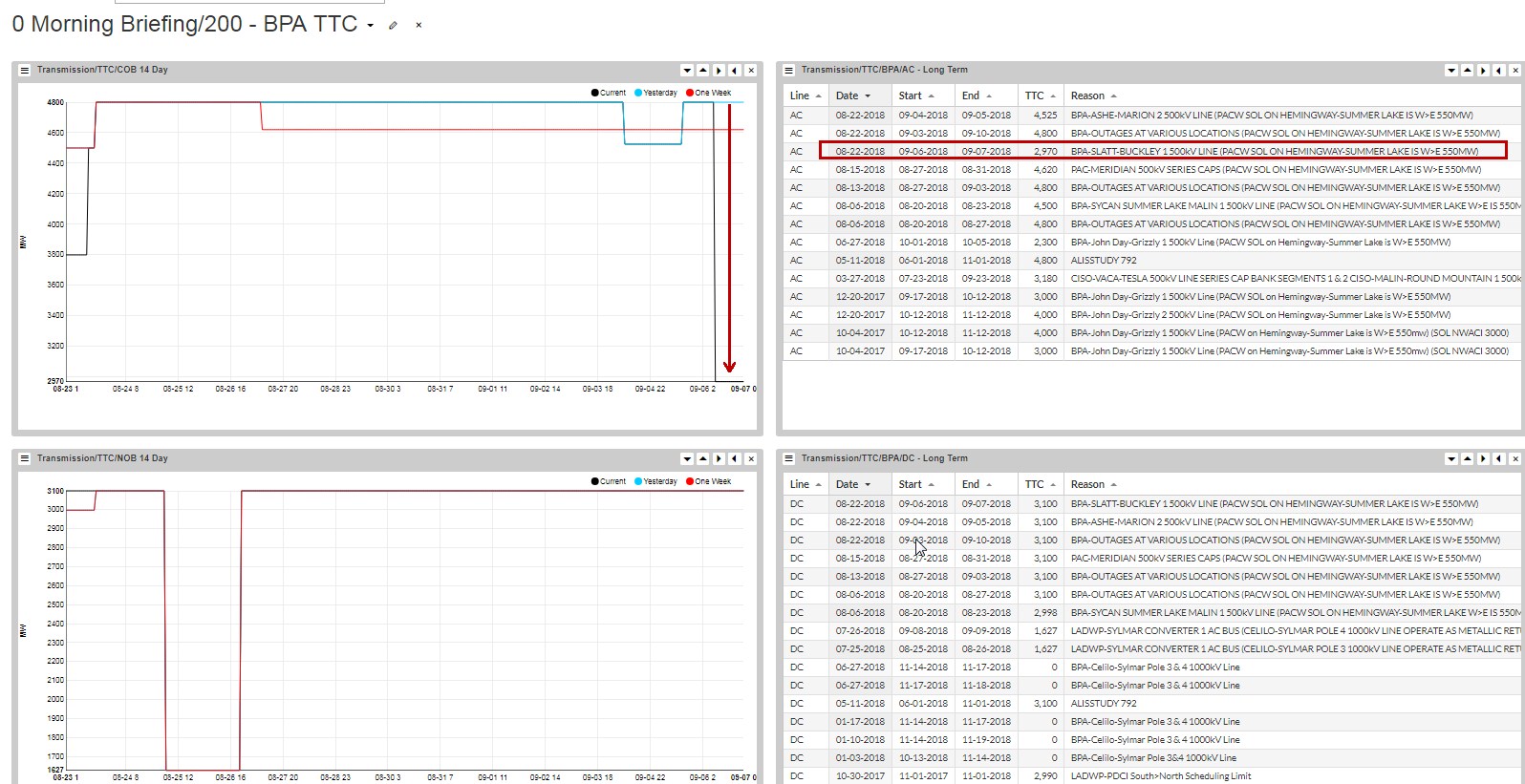 BPA layered in a new AC outage for the first week of September, cutting the TTC by 2000 MW for a couple of days. No changes on the DC.

Another sign of weakness is transmission flows. Powerex was a net buyer for several hours in the last day, plus the NOB and COB are mostly full.

There may seem like a lot of reasons to not go long – falling temperatures, rain, the trend is your friend. Despite all that, we think there is one very compelling reason to fade this recent bear trend – and that is the price. It is cheap and once the forecast changes, you won’t be able to buy anything at these levels.