Weakness, a return to reality? Possibly, or just a return to average temperatures, but no one can dispute the BOM has turned into a BOMB – if you’re long, you were wrong. 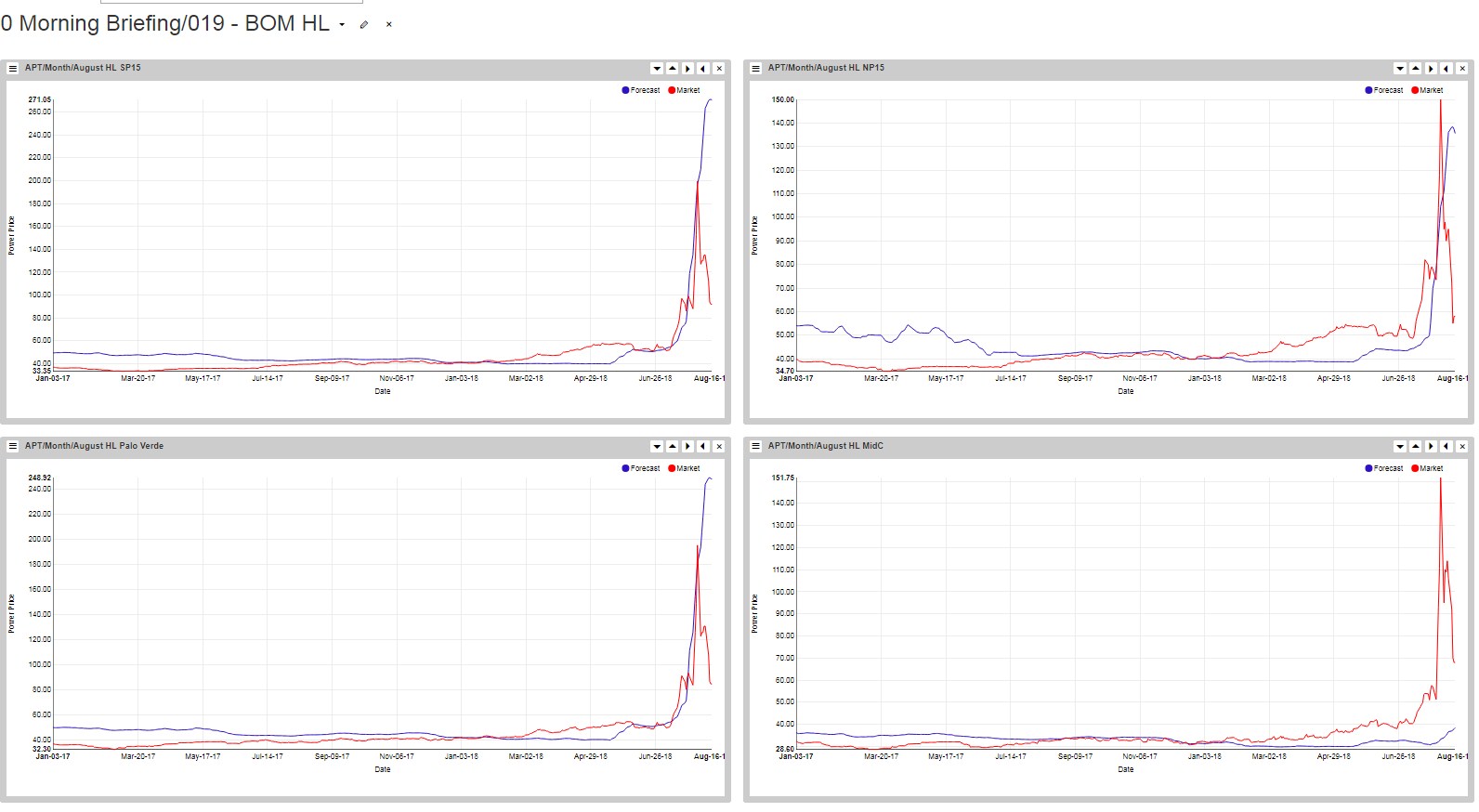 All hubs crashed and burned, but really they just over-rallied; those tippy top peaks were probably set on 25 MWs, but the post is the post and will remain in the record books for all time. Not all-time highs, those were set in 2000 and 2001, but all time recent highs. Twenty years from now, you can tell the young whippersnappers how you made zillions trading the Energy Crisis of 2018 and they’ll stare in awe at your greatness. When in truth, you probably bought 25 MWs in the morning, one day, then sold it in the afternoon for $20 more.  No doubt someone was left holding the bag; our TradeBook says it all: 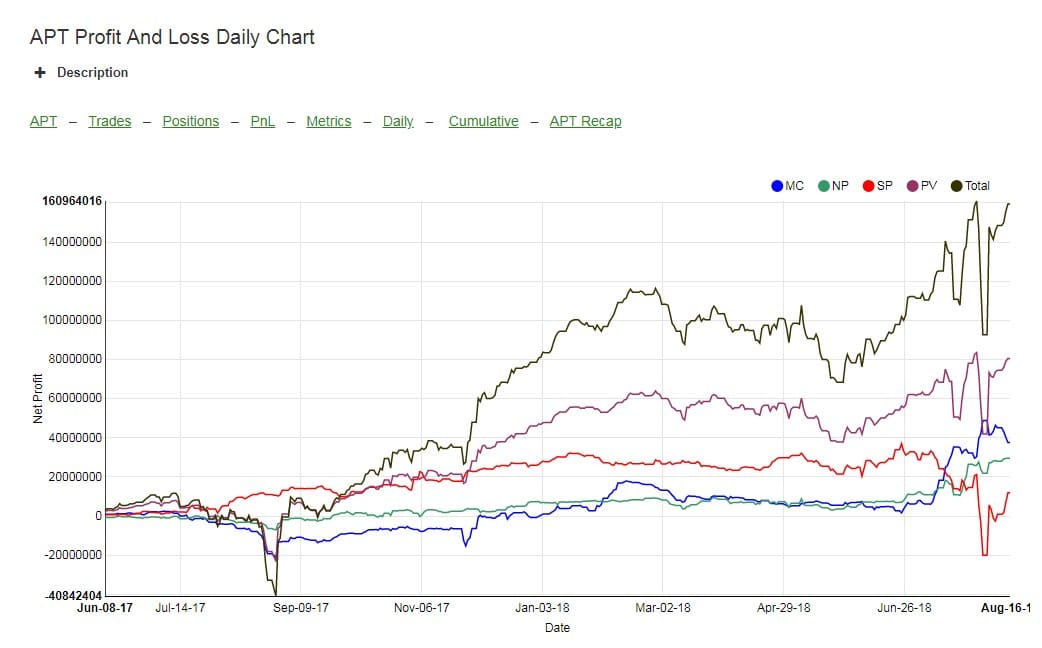 Focus on the moves in the last three weeks. The book hit a high of $160 million, then cratered $40m, and now has rallied back to $160m. Speaks to the pain of actually having a Risk Manager, after seeing a $40m daily hit you’d be forced to liquidate, if not fired. Sadly, all of that booked loss would have been recouped. NOTE – this is a machine book, we are no advocating the size of these positions. We call this the “Orange” book because if you had it on, you’d be wearing Prison Orange. It is simply a set of rules the machine blindly follows and blindly prints profits.

It wasn’t just HL that laid a hot and steamy dump on the sidewalk, so did her lil sis LL: 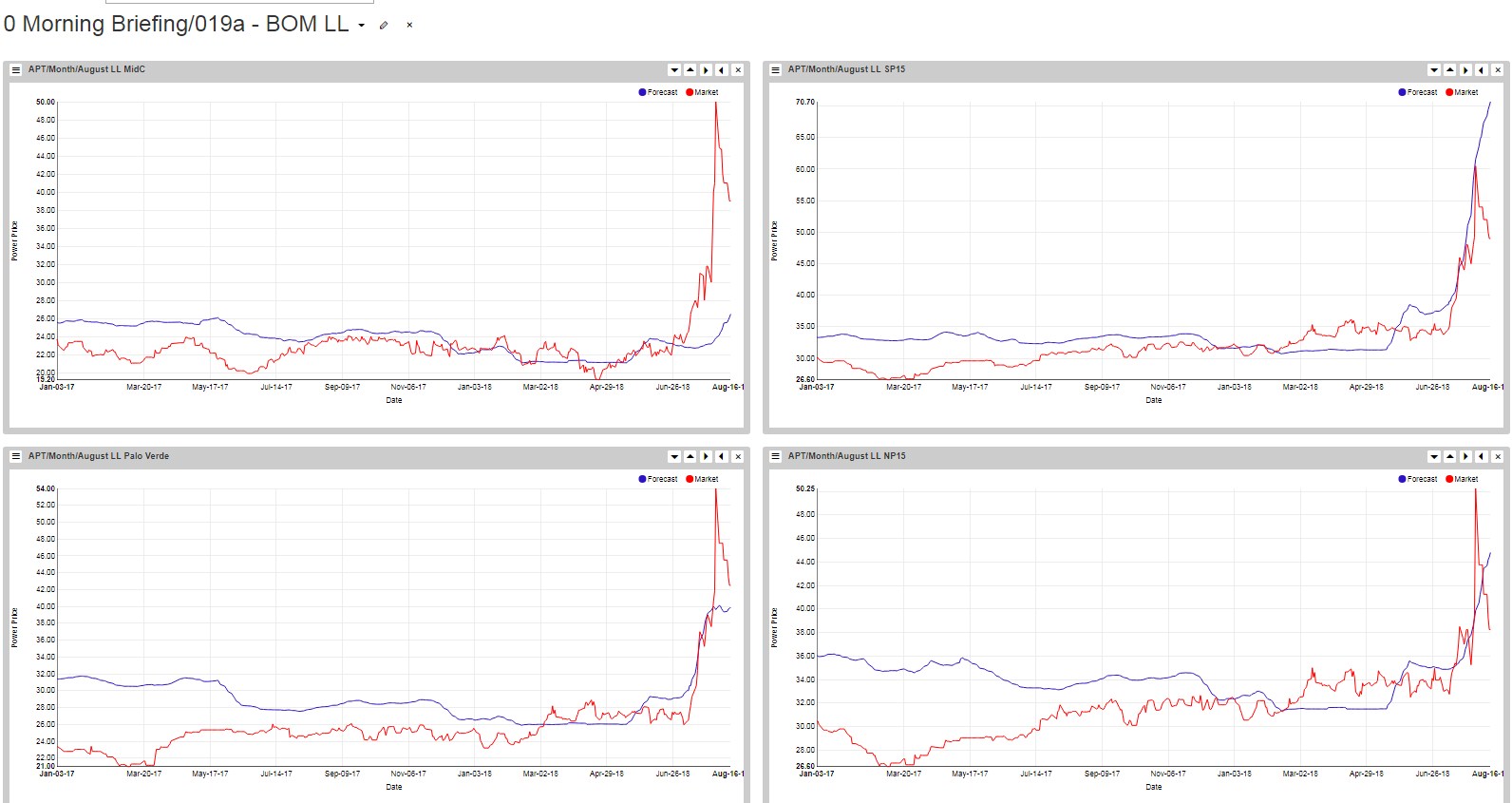 Blame it on Socal Citygate, those daily gas prices broke the WECC; the irrationality of a Dutch market was never shown better than during the last three weeks. So who were the ultimate winners and losers from this fiasco? One obvious winner was the Gencos outside of SP15, especially at MidC. They’ve been realizing average heat rates over 20k while SP has been lucky to bust 12k on a peak day. The Losers? Like always, it will be the ratepayers everywhere. Because utilities are hedge-shy, most came into this flat but the surprise heat rendered them short. Would be interesting to compute the cost of Socal Gas’s miss-management of their outages on the rest of the WECC, am guessing its in the 100s of millions. Maybe I’ll do that this weekend. 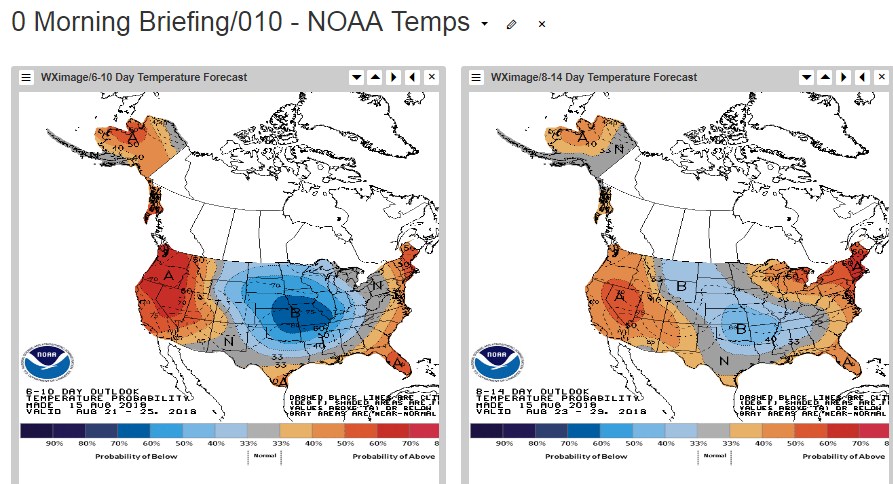 Oh Oh, it gets hot again, but nothing like the end of July event, but the load centers will all be above climo. The deserts, especially Arizona, are mild from monsoon-like conditions. 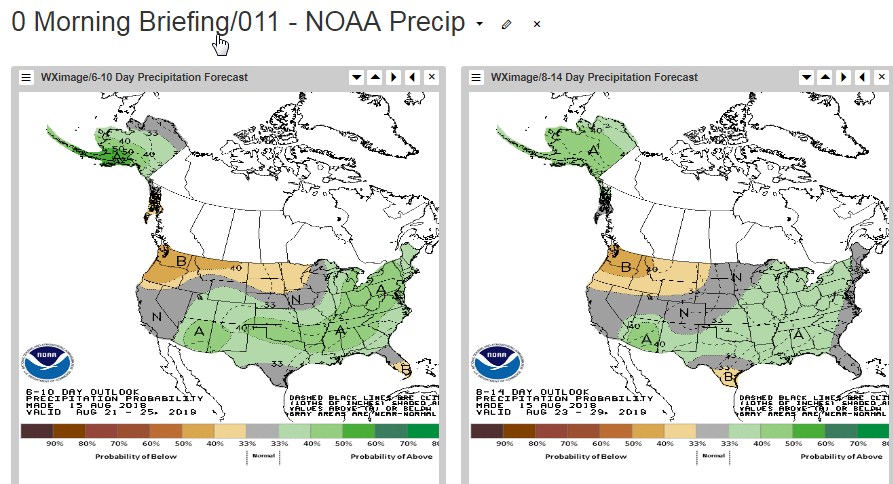 Those rains will provide succor to SP, PV will have the energy to spare. No rain in the PNW, that region has become desert-like itself. 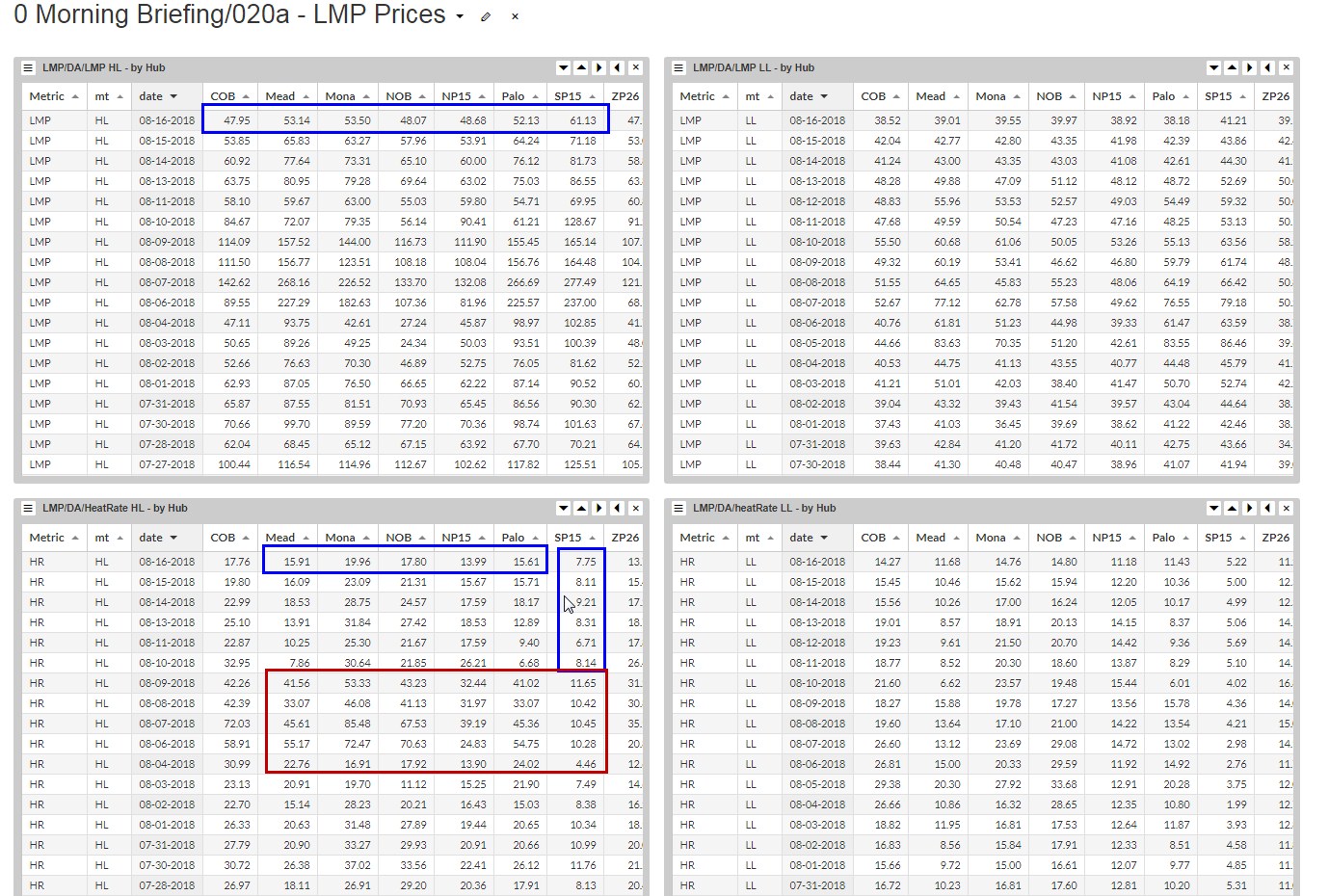 See what I mean about tempering prices, but this pullback may be short-lived, though the system has had a chance to recover. Socal dropped in another two bcf of storage since the start of the month; Northwest reservoirs have narrowed the gap to normal. Without the Interior hot, this next heat set won’t be like last week; we don’t think. 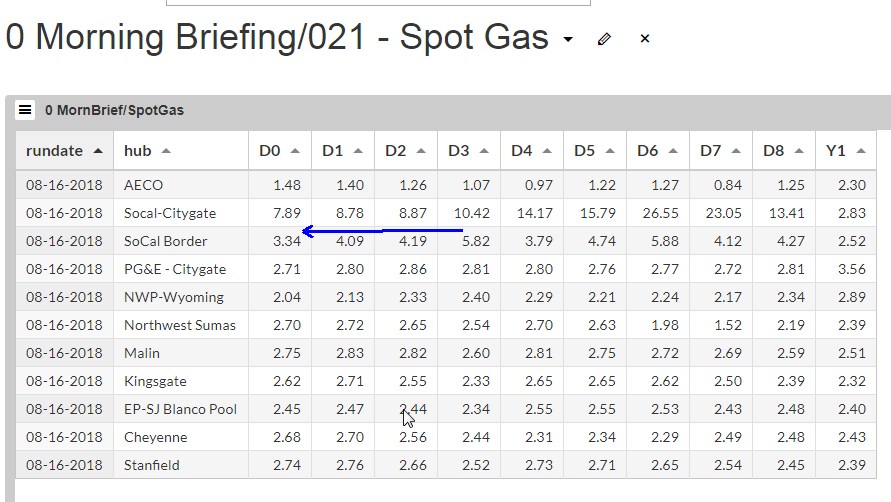 Check out the collapse at Border; dropped $1.70 (35%) in four days, which is in lockstep with Citygate. Meanwhile, the rest of the WECC may as well be in Alaska; those prices have zero correlation to Socal. 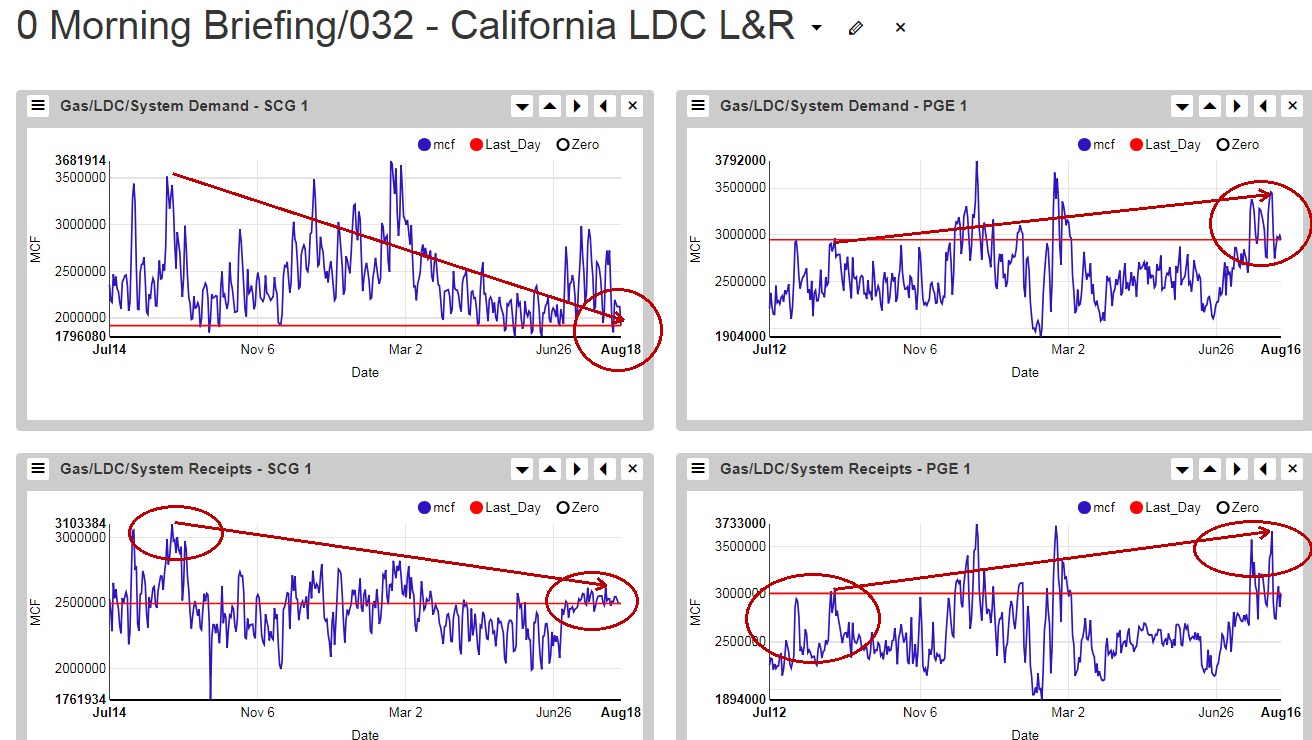 This is interesting; Socal’s loads are off, year-on-year, as is its supply while Nocal is up in both. The correlations are negative and speak somewhat to California’s natural gas flexibility. 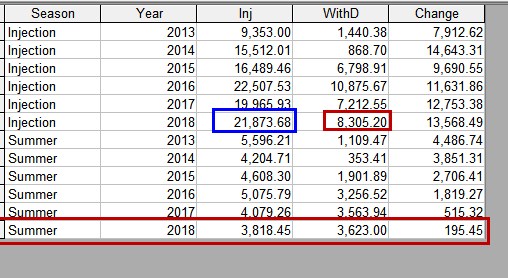 We were curious as to how the Northwest gas picture looks and used the storage at Jackson Prarie to answer that question. The two seasons, Injection and Summer, reflect the period from April 1 through today and July 1 through today, respectively. As we guessed, Summer 2018 has seen the lowest net builds in JP storage in the last six years – a meager 195 MMCF. Last year, the summer build was 515, on average it has been around 3000MMCF. But, when looking at the Injection Season, JP is ahead of all years except 2014. All that means is the water year was massive and no gas burned, it all went into the ground, then the gencos pulled it out to sell 20k heat rates. 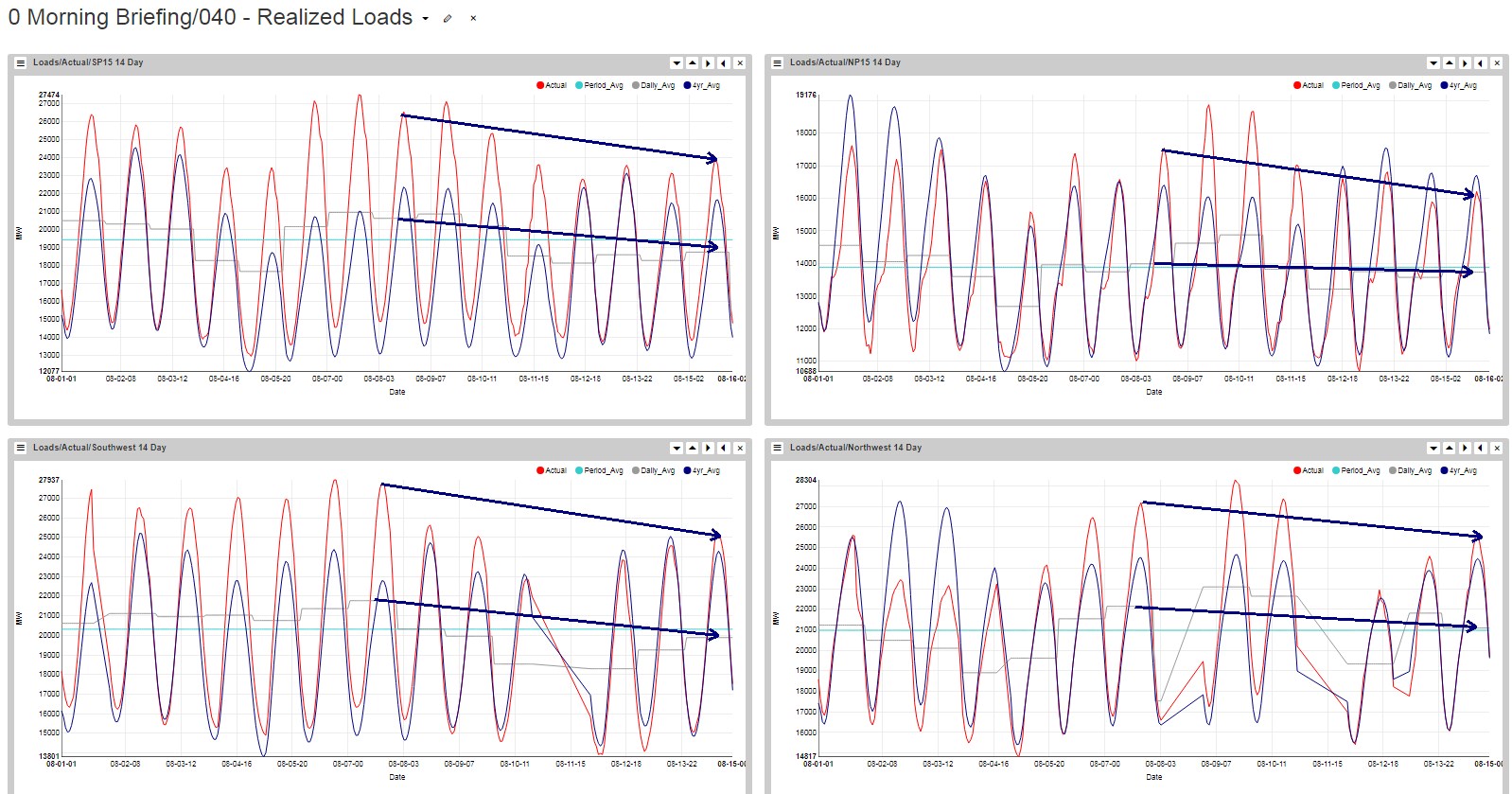 Realized loads are off across the WECC, most dramatically at SP and PV. 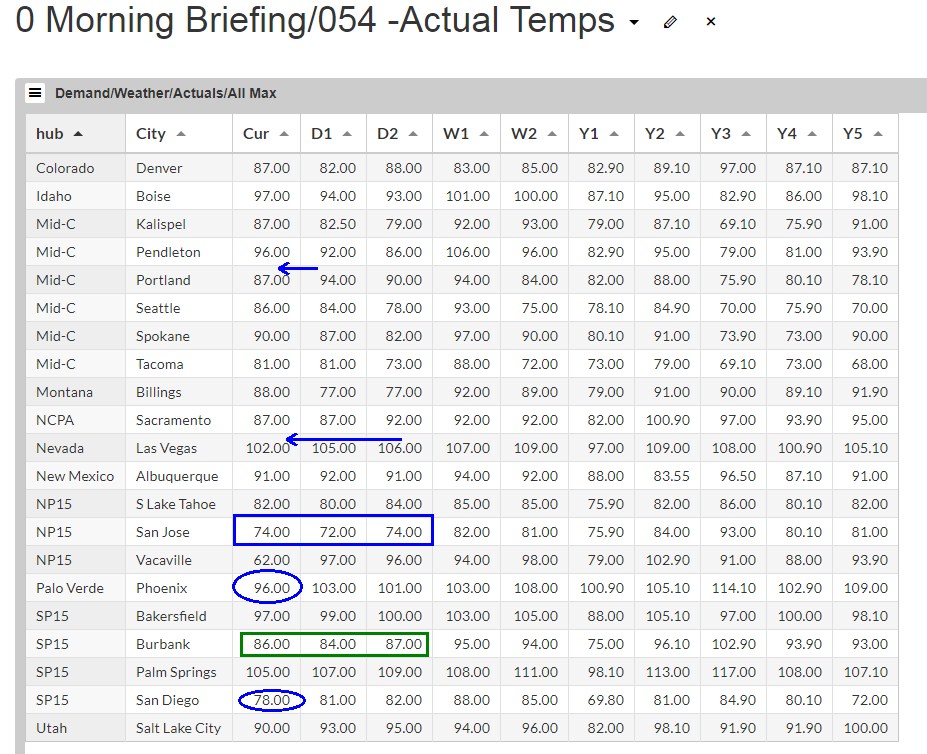 San Jose barely can post a degree day, yesterday it was a mild 74 degrees. Burbank never cratered but is now a more comfortable mid-80s. Phoenix is back to double digits, though doubt that lasts long. The Northwest remains toasty, Seattle and Portland were as warm as Burbank. 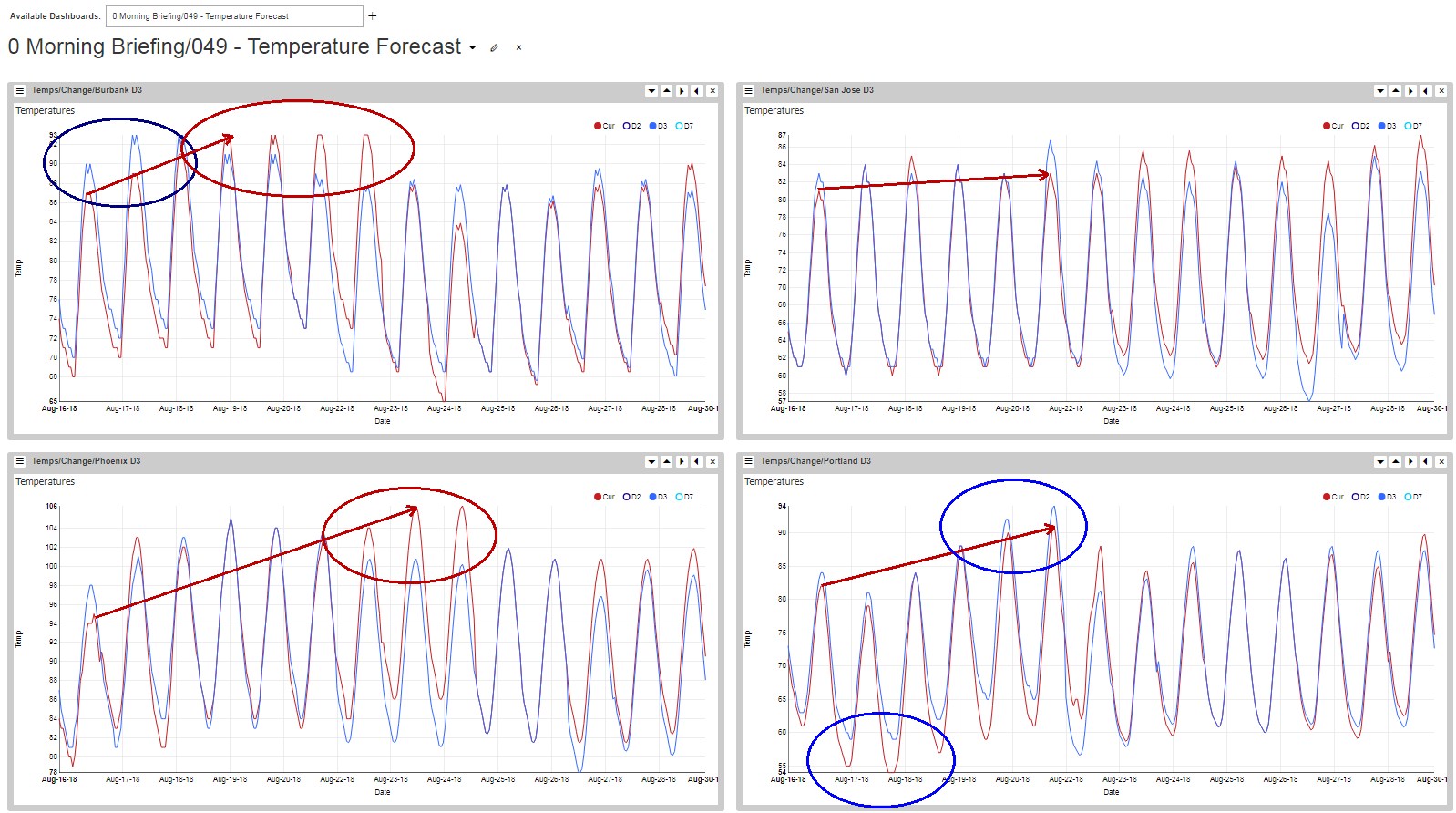 Looking ahead, there is more heat everywhere, especially in the South. The Phoenix and Burbank heat is not exactly coincidental suggesting less pressure on loads, plus the LA heat is nothing like it was last week. The Northwest forecast grew cooler versus three days earlier while both Burbank and Phoenix did the opposite, they are warmer. 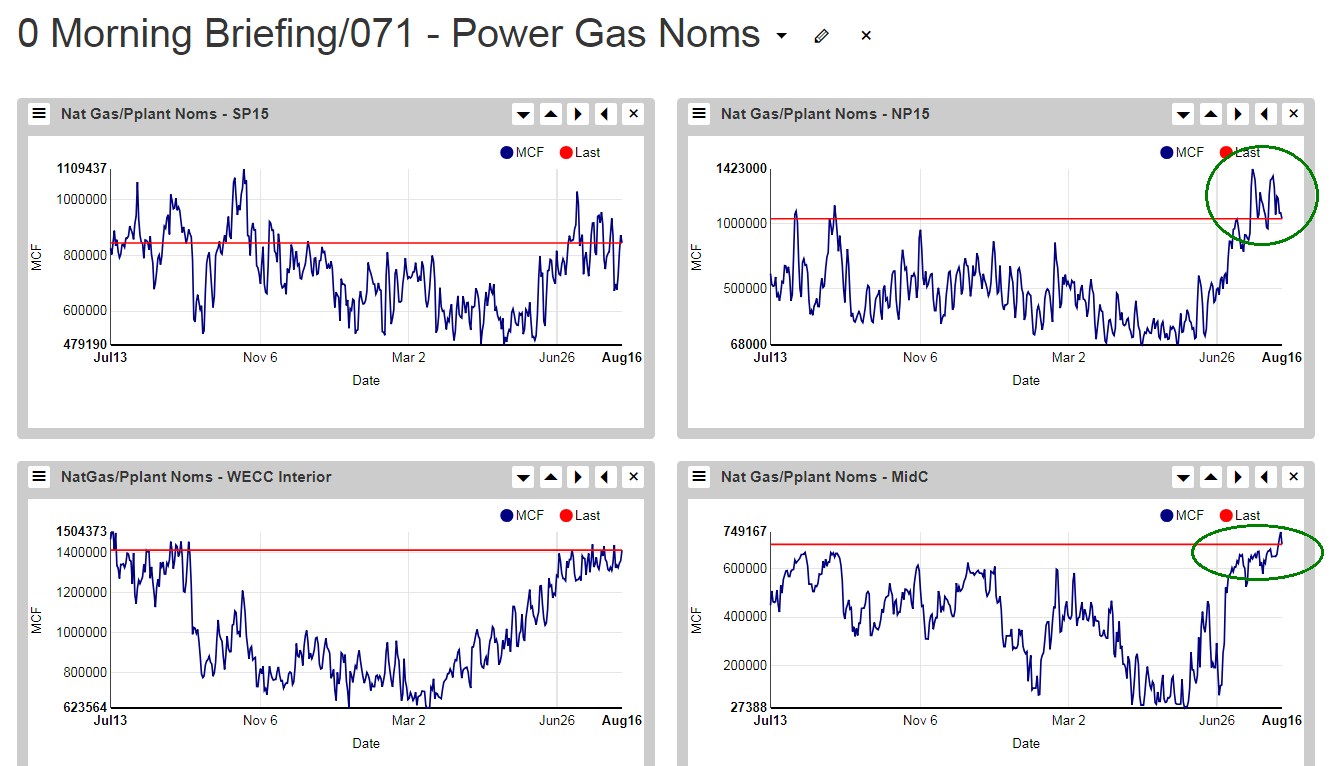 Everything is running everywhere but SP15; it would suck to be  a genco there. What would suck even more would be a ratepayer anywhere in California. Those poor devils are stuck in a $400-$500/mwh market every day of their lives, regardless of what the wholesale market does. So here’s a question – how can AZ and NV have rates of $0.11/kwh while all three cal utes have peak rates of $0.45-0.55? Don’t they realize their miss-management will eventually lead to their demise? 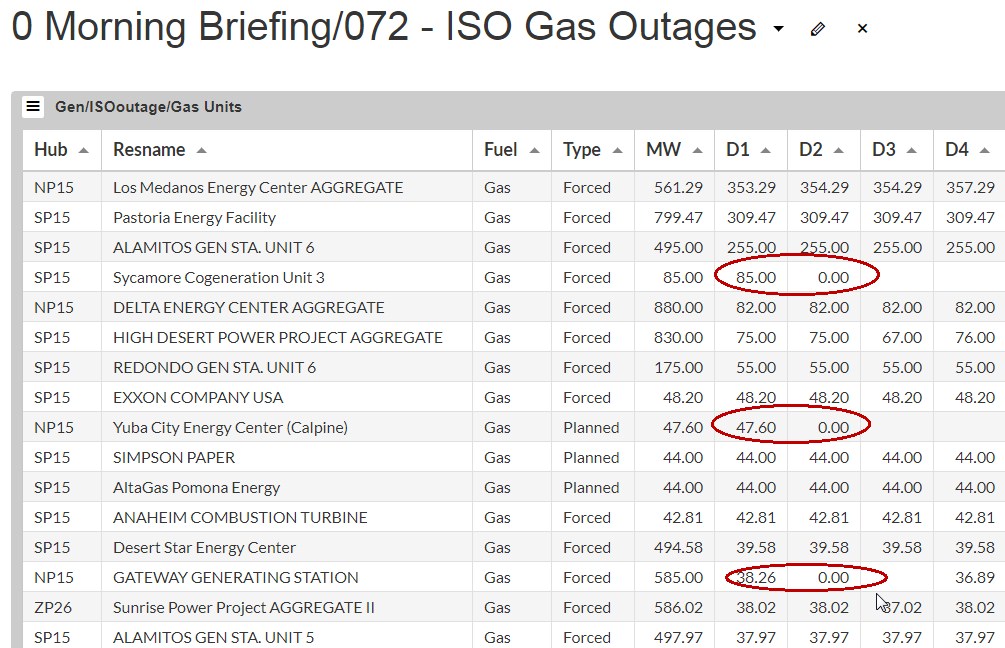 A couple of minor new outages, no big deal. 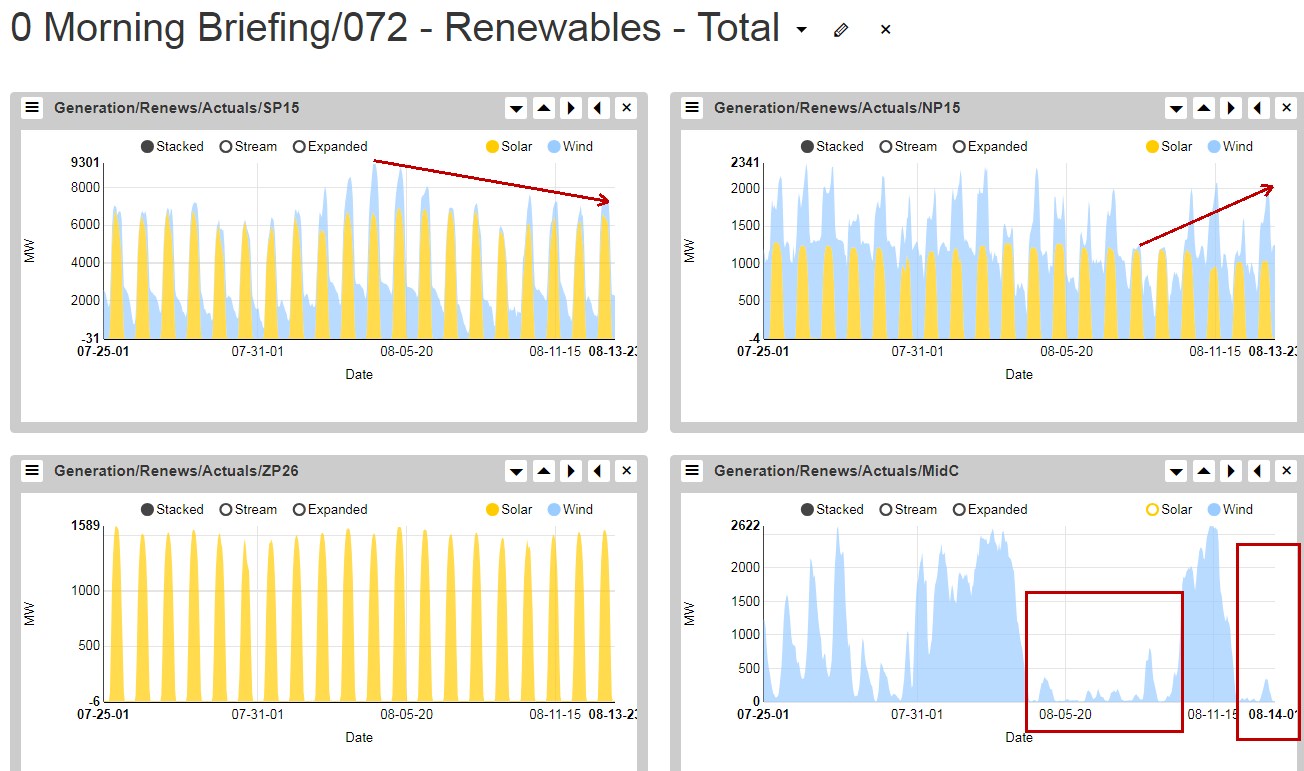 Wind quit blowing at the MidC, that is a big deal for BPA. NP saw a big renewable day yesterday. 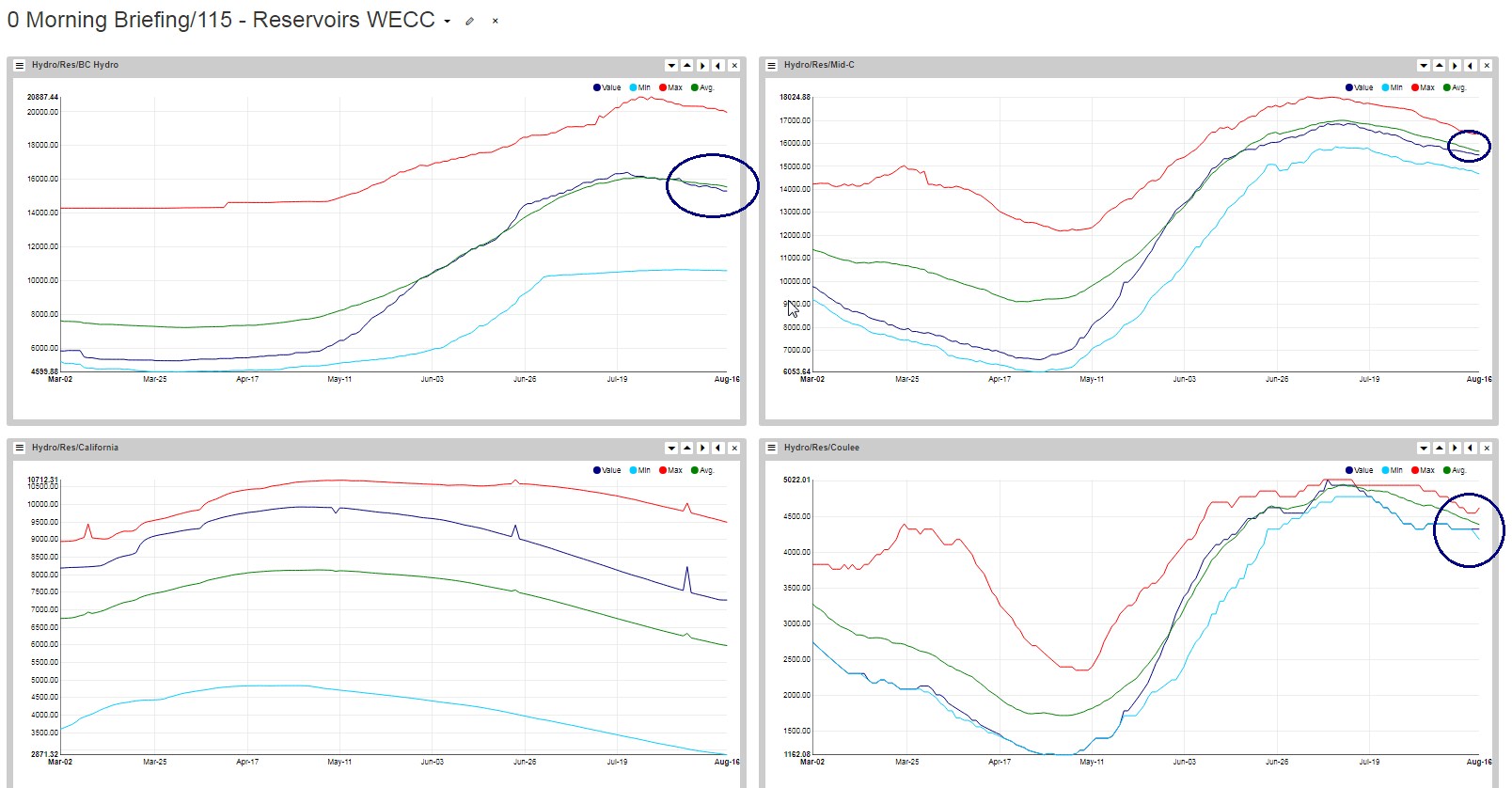 We mentioned earlier that the Northwest’s storage outlook is improving; the gap between current KAF and normal has tightened. The differences were always small but doubt BPA liked seeing those; now the delta is even lower. 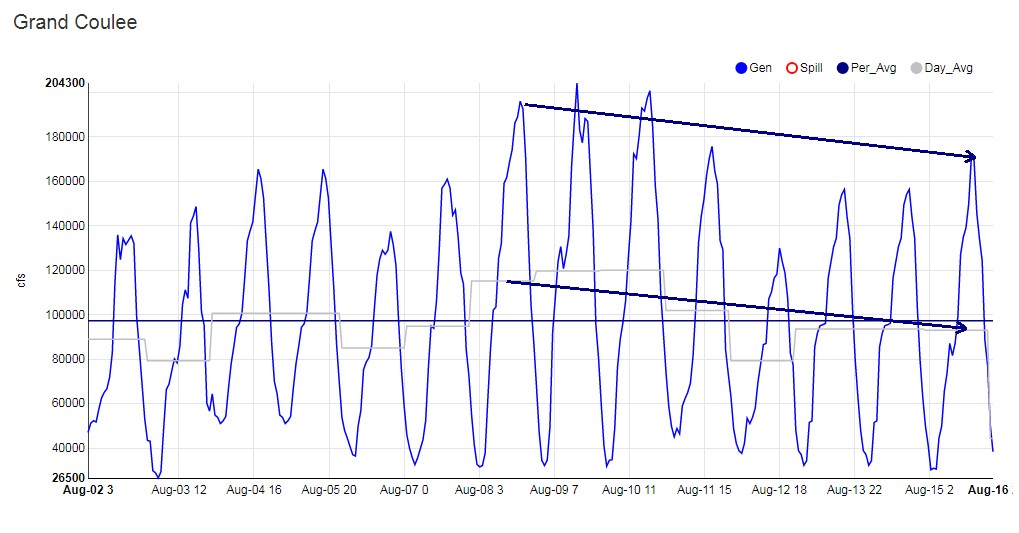 To get Coulee back to a more “normal” level, BPA turned the valve and cut discharge which just keeps the MidC tight, as reflected in its gas burn:

Everything is running there; interesting because most of those units are 7-9k heat rates and they are all selling into a 20k market. Maybe the trade is to go long NRG and Calpine equities? Nah, the east coast has been a train wreck this summer.

Those cuts on the Peace were short-lived, so was the draft at Mica.

Shasta continues to cut its discharge, but that is precisely how the Bureau runs the plant every year. Look at those step-downs in Average, almost lockstep with this year. 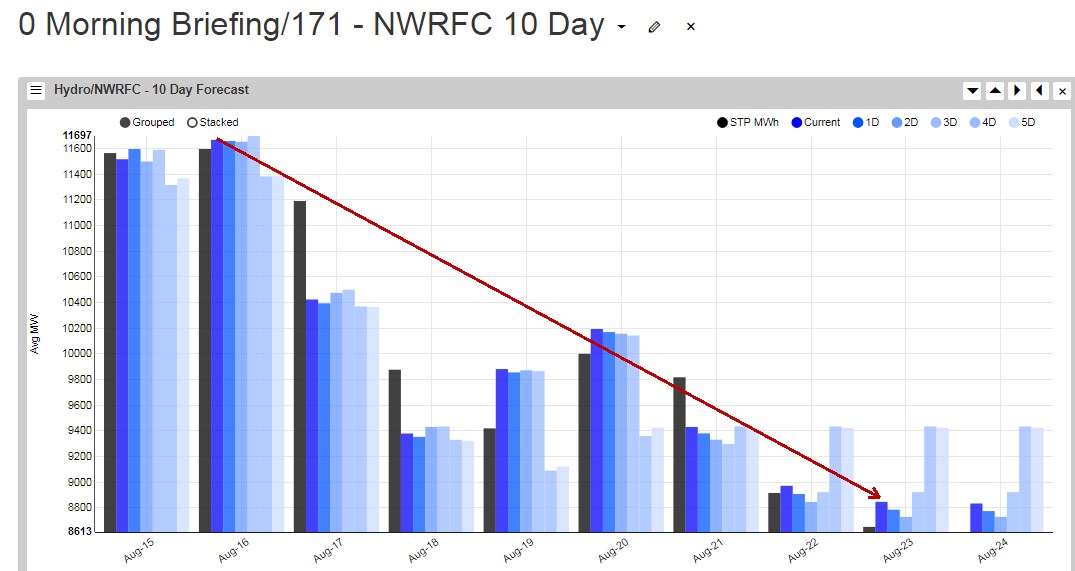 OK, brace yourselves, the Northwest is set to get a lot tighter if you believe the NWRFC. Those bad hombres in Portland, Trump’s boys, dare to suggest a three gig cut, week-on-week. Bear in mind, the Northwest grows warmer next week; loads are going up: 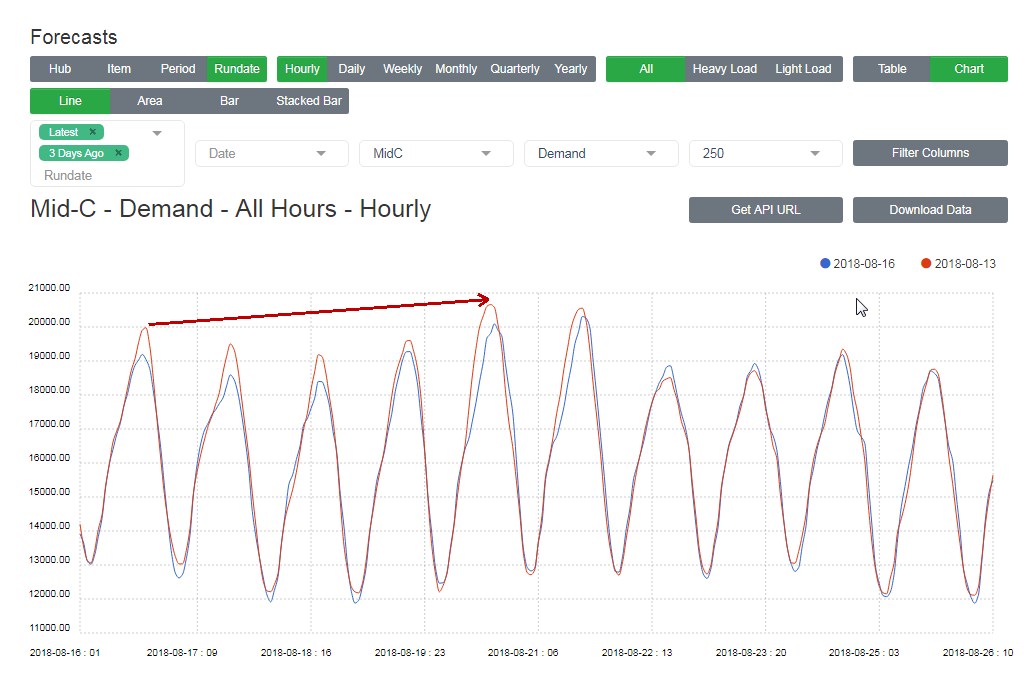 This is our forecast, and it’s a good one, as long as those temps stay where they are currently projected. We have peak loads rallying 1000 MW all the while the federales are cutting 3000 MW of hydro energy. Oh boy, something has to give. 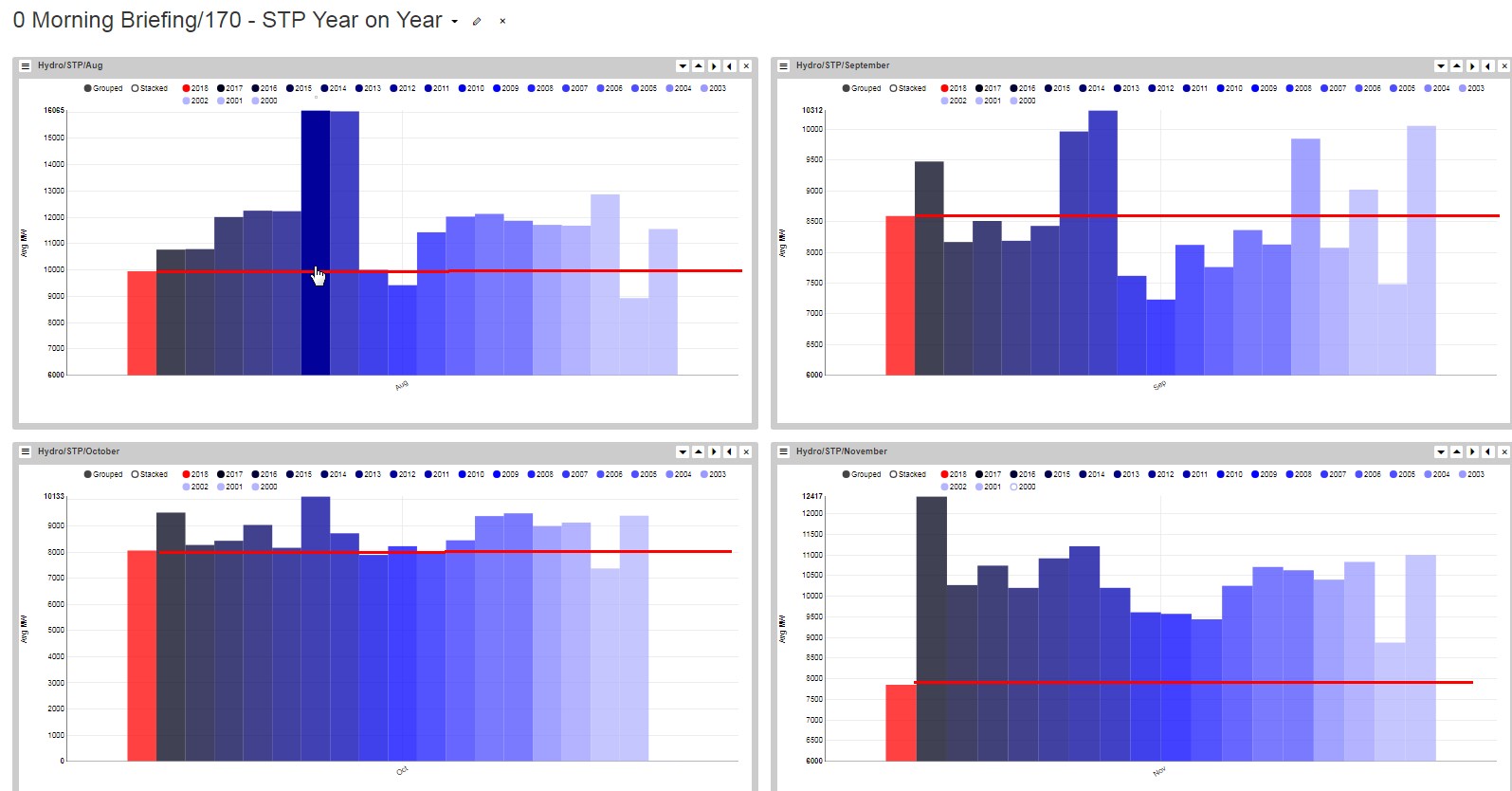 Speaking of giving, those same feds have destroyed November; it is now projected to be the tightest Novy on record. We get a carryover from a dry summer, but reservoirs are almost back to normal and who dare predict those kinds of precipitation anomalies 75 days out. Not I, nor should the bad hombres do it either. We are buying their 7.8 gig forecast for size. 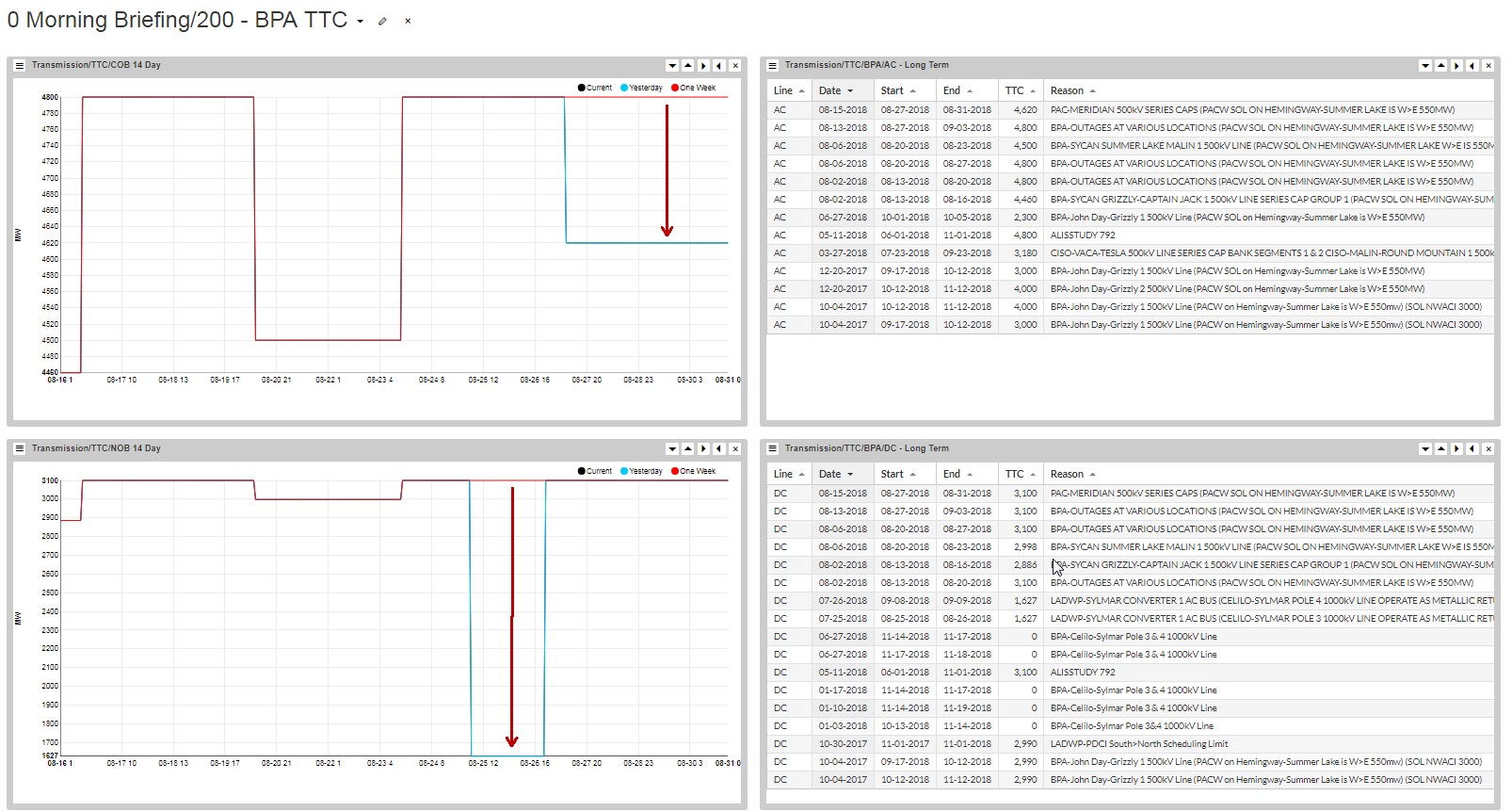 Some new cuts on both the AC and DC.

The Northwest can’t fill the south-bound lines, even with cuts in TTC, because it so dang tight up there in God’s Country. Path 26 continues to be loaded south-bound and Path 15 may as well open the lines, net energy wouldn’t change much.

Brace yourselves, for round Nth of the Summer of Love. Not sure this one will rock the boat like the last few, but after this year, nothing would surprise me. Maybe its time to fade the recent crash and buy some BOM?