Markets have cooled in sympathy with the weather, but whether weather stays cool seems to be up for debate. 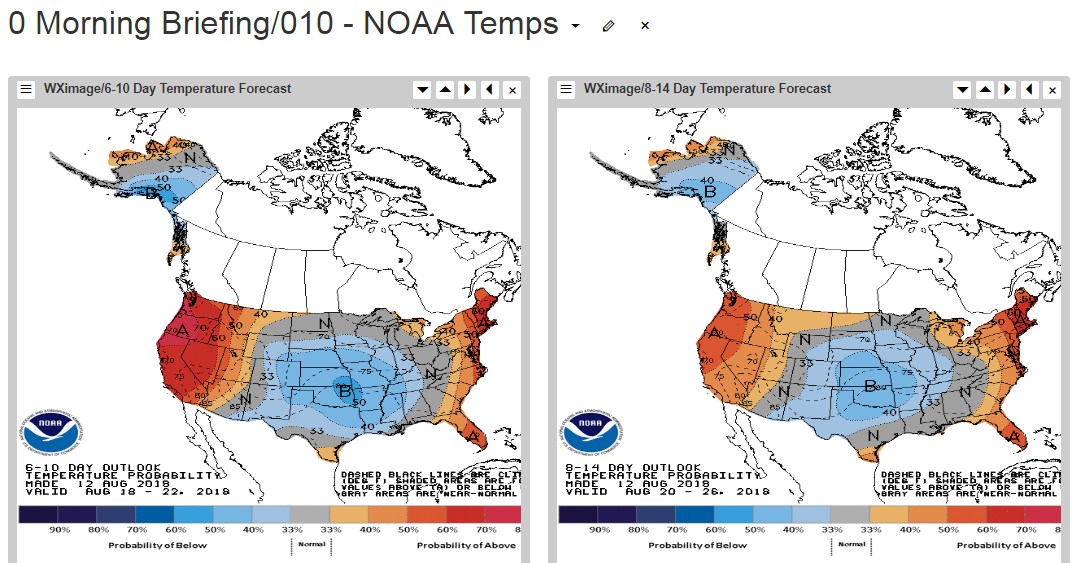 NOAA (yesterday) puts the 6-10 day in the hot pot; the 8-14 day is cooler but still above average. The US interior is below normal, which bodes poorly for Nymex. Today is August 13, one of these days we are going to title this blog “Winter’s Coming,” but not today or probably ever in August – but it is coming. Most cities (outside of LA) are already seeing declines in Normals. 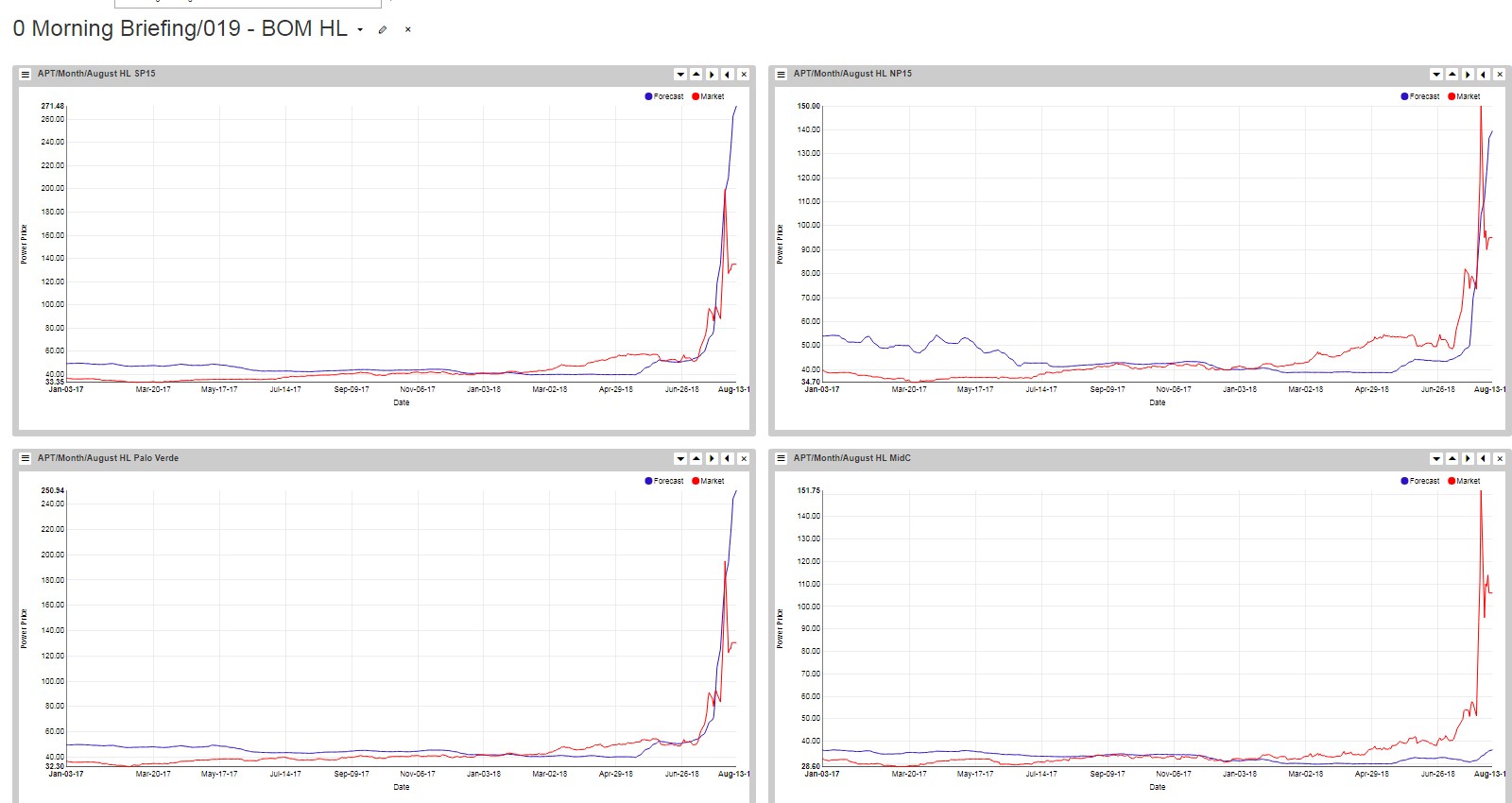 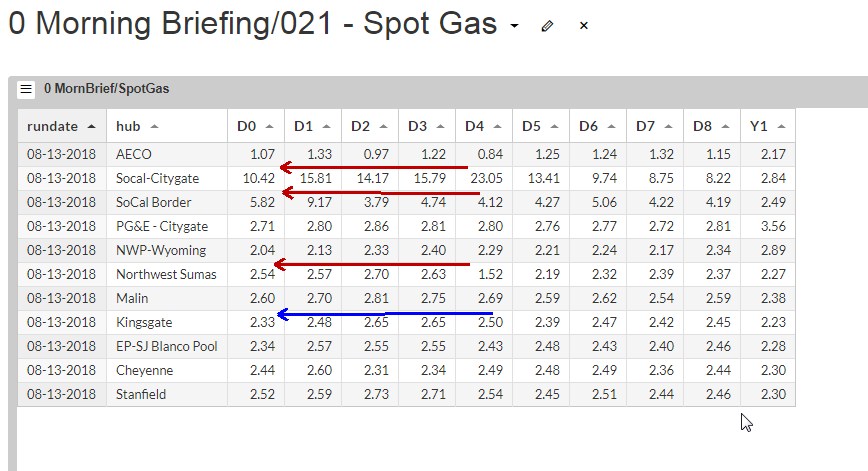 Despite the cooling, Citygate remains in double digits. Equally impressive is the new premiums Border has adopted; on Friday it traded $5.82 and Thursday it cleared at an astounding $9.17.  This is a relatively recent phenomenon and has a material impact on the southwest markets – most of AZ and NV gas units are pegged to Border prices.

The contagion of price remains in effect, as witnessed in the LMP clears for today.

Mona realized 30k heat rates, COB and NOB in the 20s, the only hubs with reasonable heat rates are SP, Palo, and Mead.  NP may seem fair at 18k, but not when San Jose is 80 degrees.  With another round of heat, we cannot see these high clears going away this, or probably next week, which is pretty much the rest of BOM. That leaves September as the soonest we see a return to sanity, but the market isn’t priced like that is going to happen. 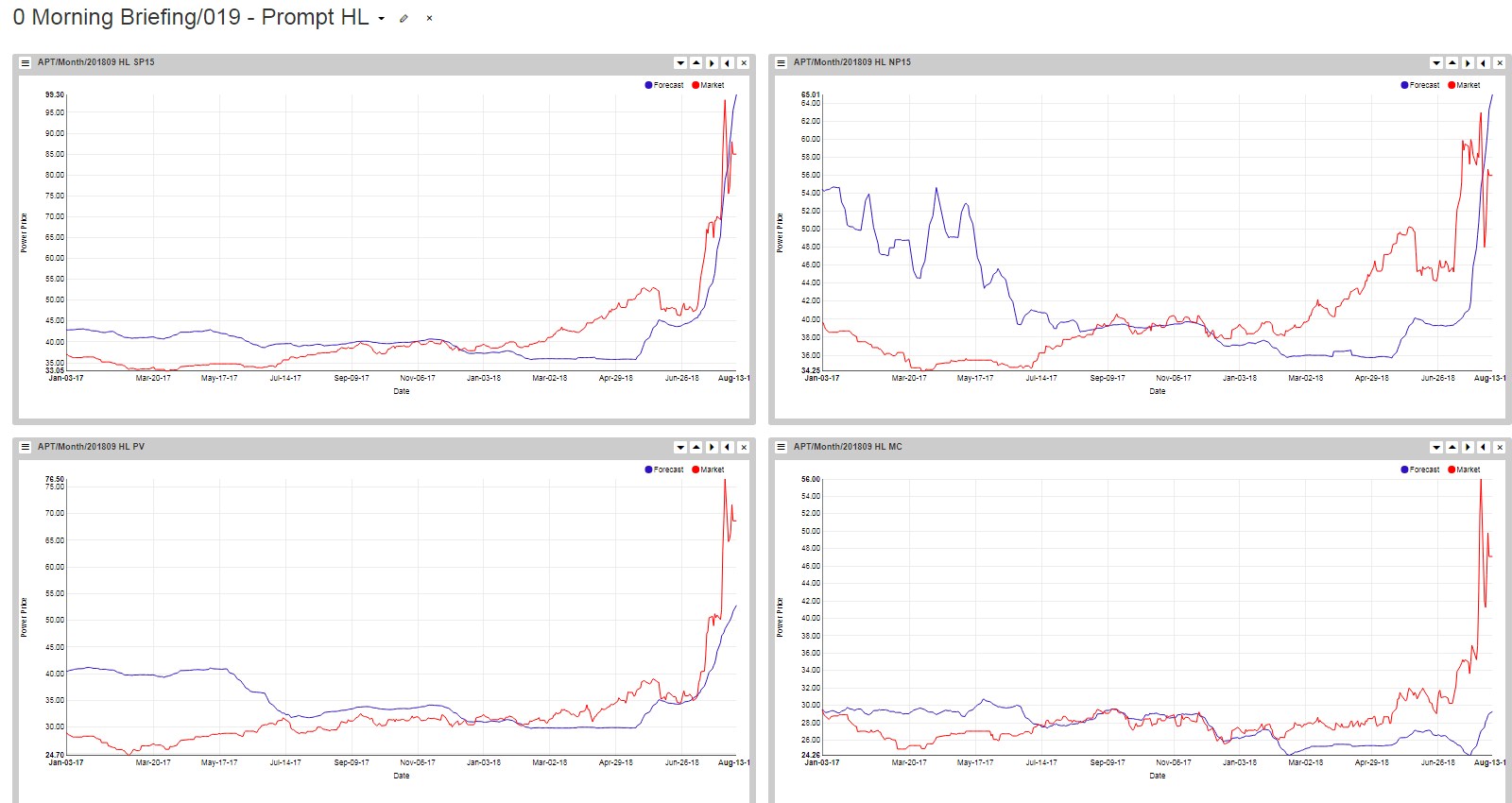 And perhaps the market is right. The Northwest’s problem is water, and there isn’t any and until it rains there won’t be any changes. That big rain is probably 8-12 weeks away. Loads will decline, but we already have proven that fundamentals don’t matter; all that matters is the Socal Citygate price. When will that drop?  Net capacity doesn’t change in September; the North Zone will remain constrained to about 280 MMCF passthrough. Perhaps if LA temperatures drop back into the 70s, the gas price will come back to earth, or not. 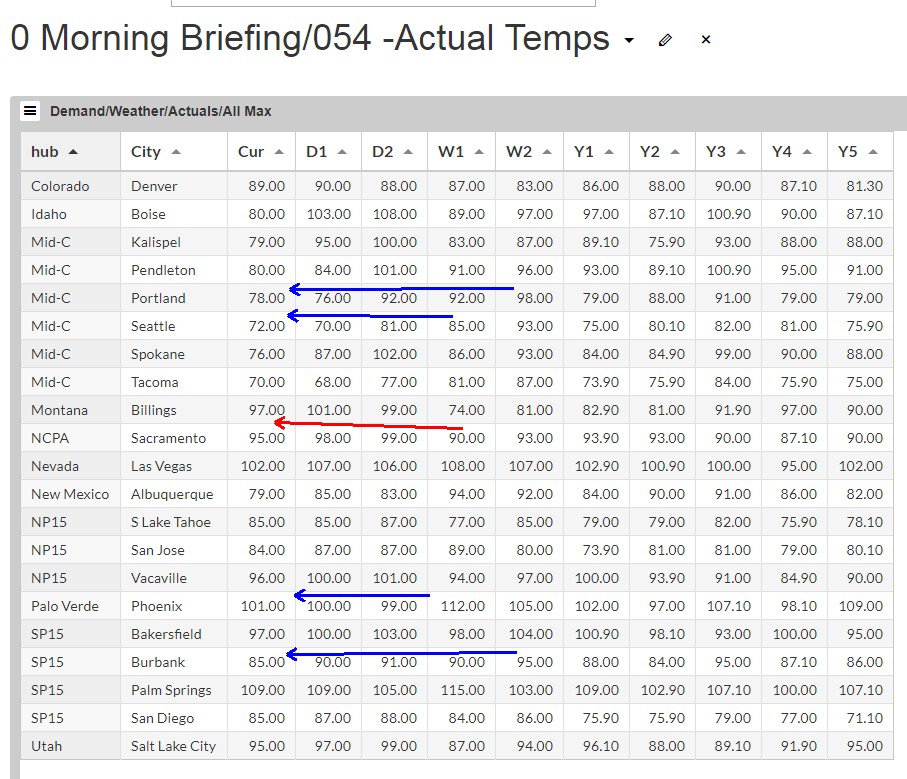 Temperatures already cooled, Burbank’s high yesterday was 85 and was in the 100s last week; Phoenix dropped below 100 on Friday, yesterday was “just” 101. Seattle and Portland are back to 70 handles, yet heat rates are still off the charts. 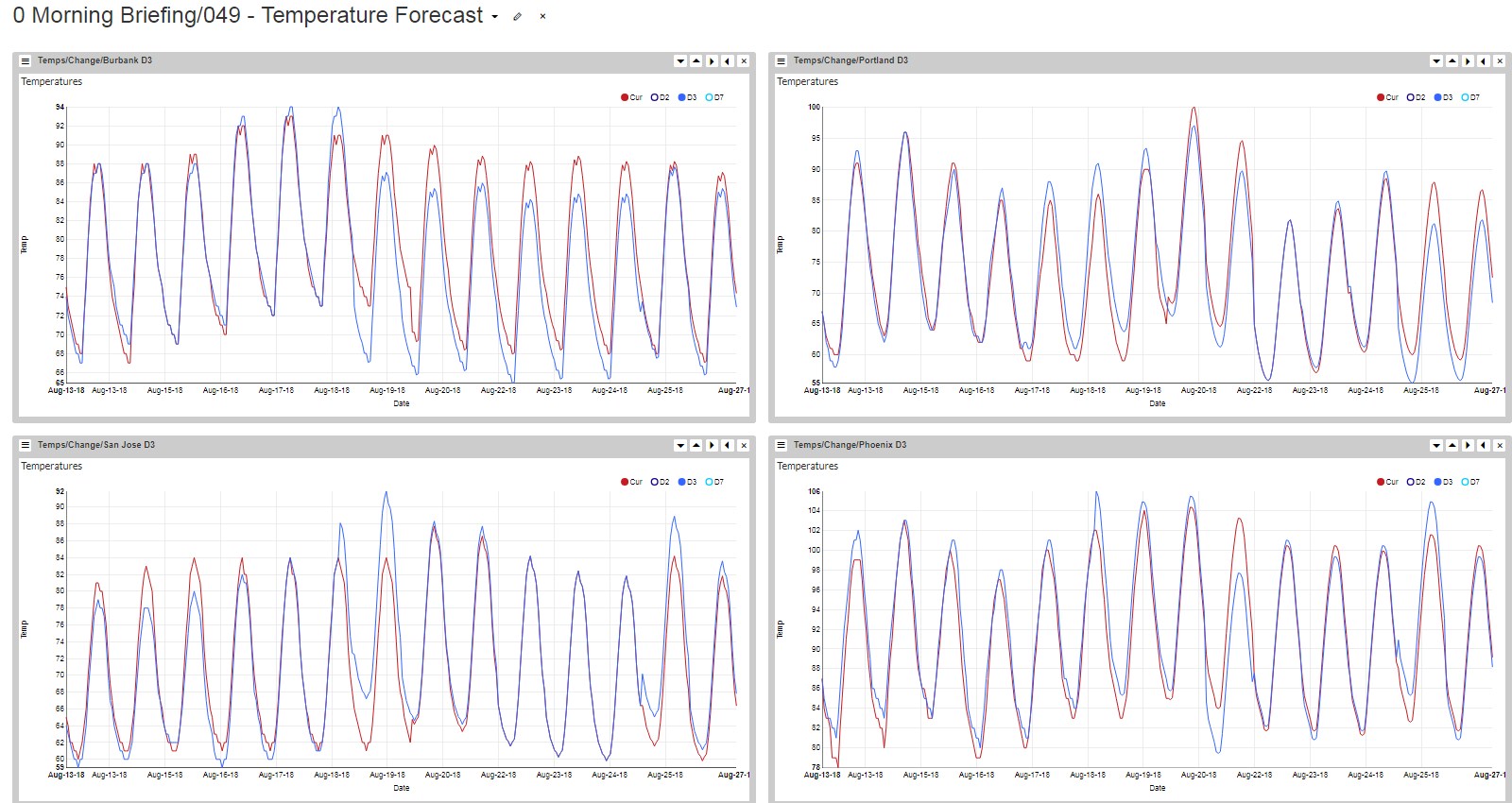 Every load center is forecasted to see increasing temperatures; nothing too extreme but don’t be surprised if these forecasts grow hotter, that has been the trend this summer.

NP and SP’s solar is off; we have to think that is from the smoke. The Northwest finally enjoyed some wind energy, the region has been becalmed of late, but not yesterday. 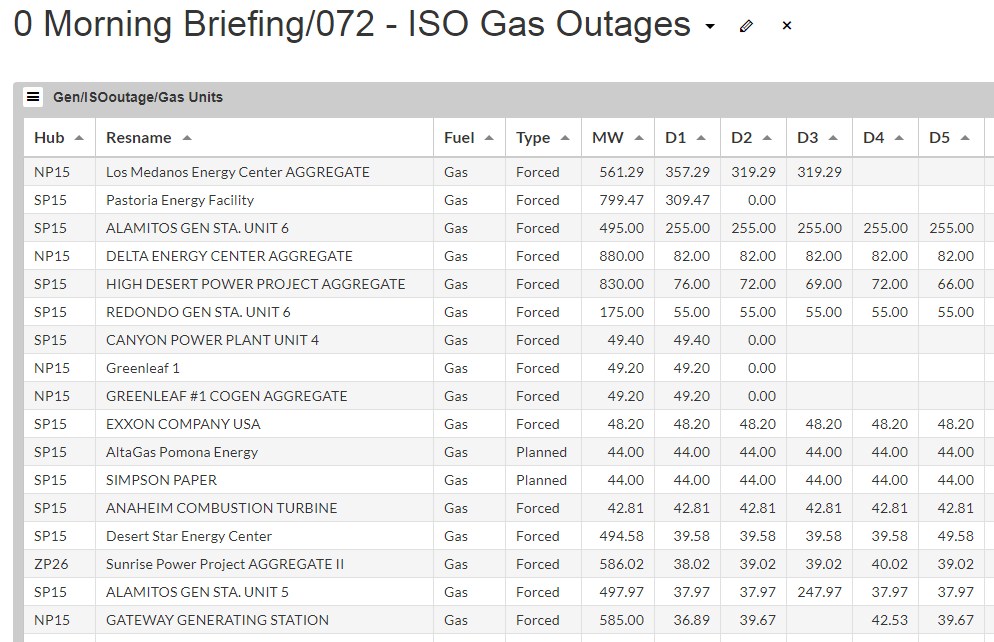 Los Medanos and Pastoria have units offline; we don’t think the SP ones matter as much given the hub’s preference for serving load via imports. Doubt the NP units matter that much either, at least not until loads pick back up. 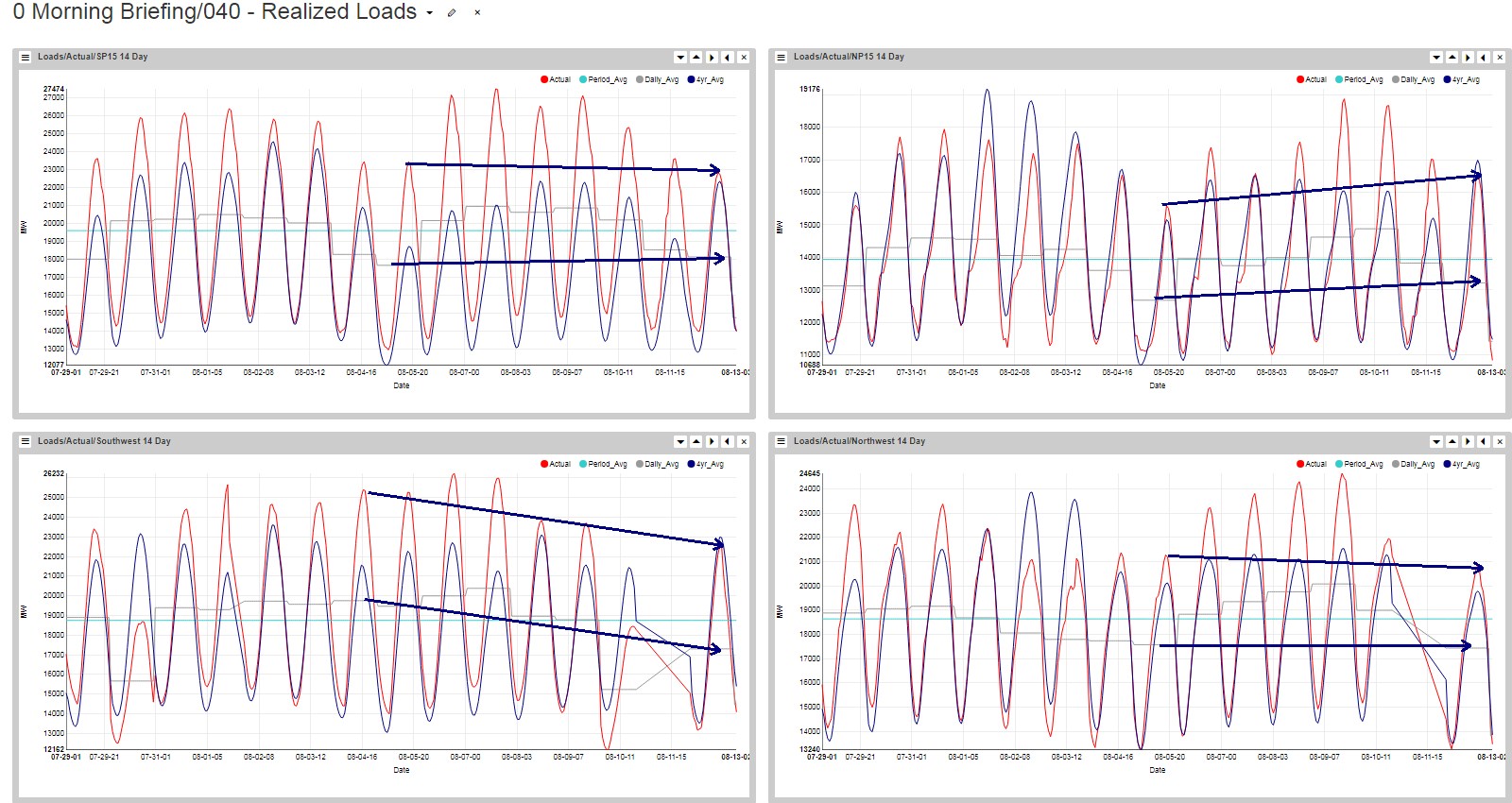 Only NP’s loads are up, week-on-week; Palo’s are off the most.

Northwest reservoirs are below average, but not by much. If BPA needs the energy, they have water to draft, but the big ute is reluctant to pull that water, not with 8-12 weeks of Indian Summer staring it in the face.

Coulee’s reservoir has been around 1282 for two weeks; all the while inflows are dropping resulting in declining output. So, despite a drop in loads, if hydro drops the same nothing changes. 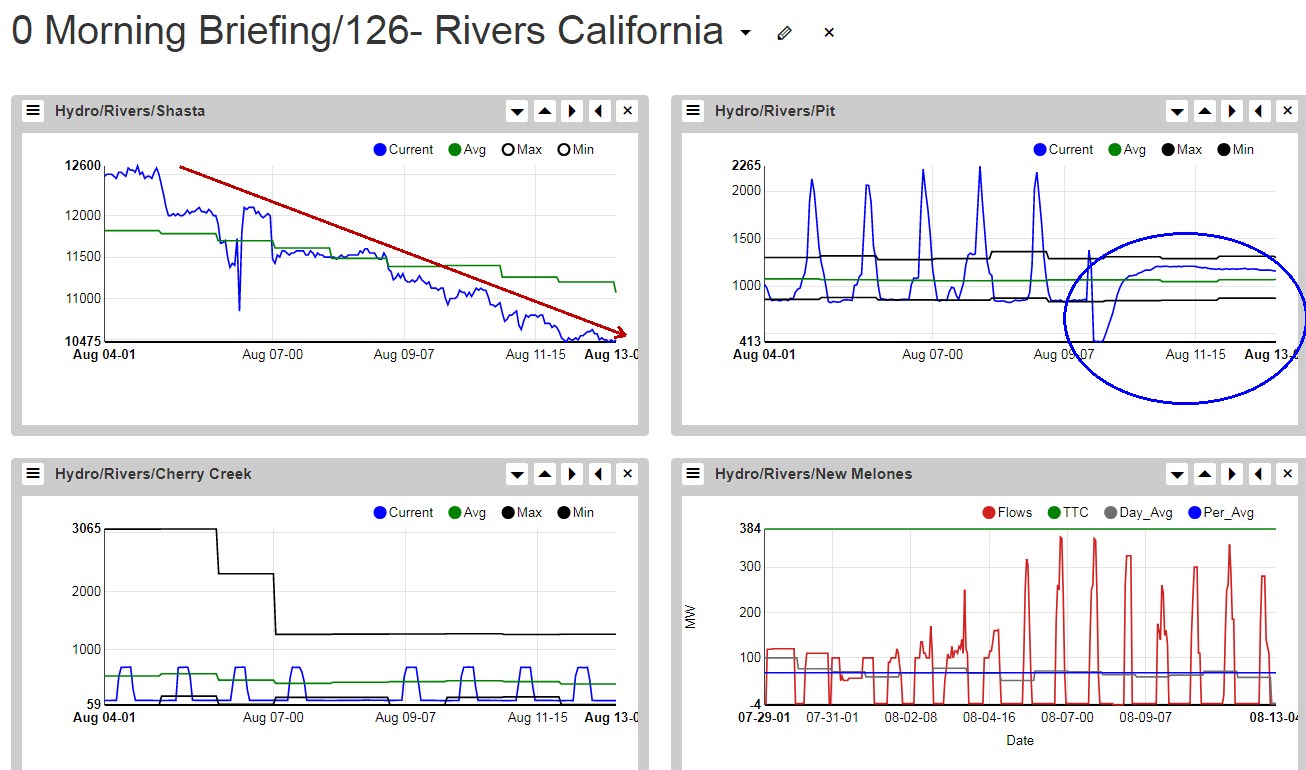 California also sees some changes, primarily at Shasta. That regulated project has seen a 20% drop in discharge; no longer is the plant running at hydraulic capacity. Perhaps they took Trump’s hydrology advice and decided to not waste that water by dumping it into the Pacific. Makes me sleep sounder knowing our President is also micro-managing the nation’s hydro plants. 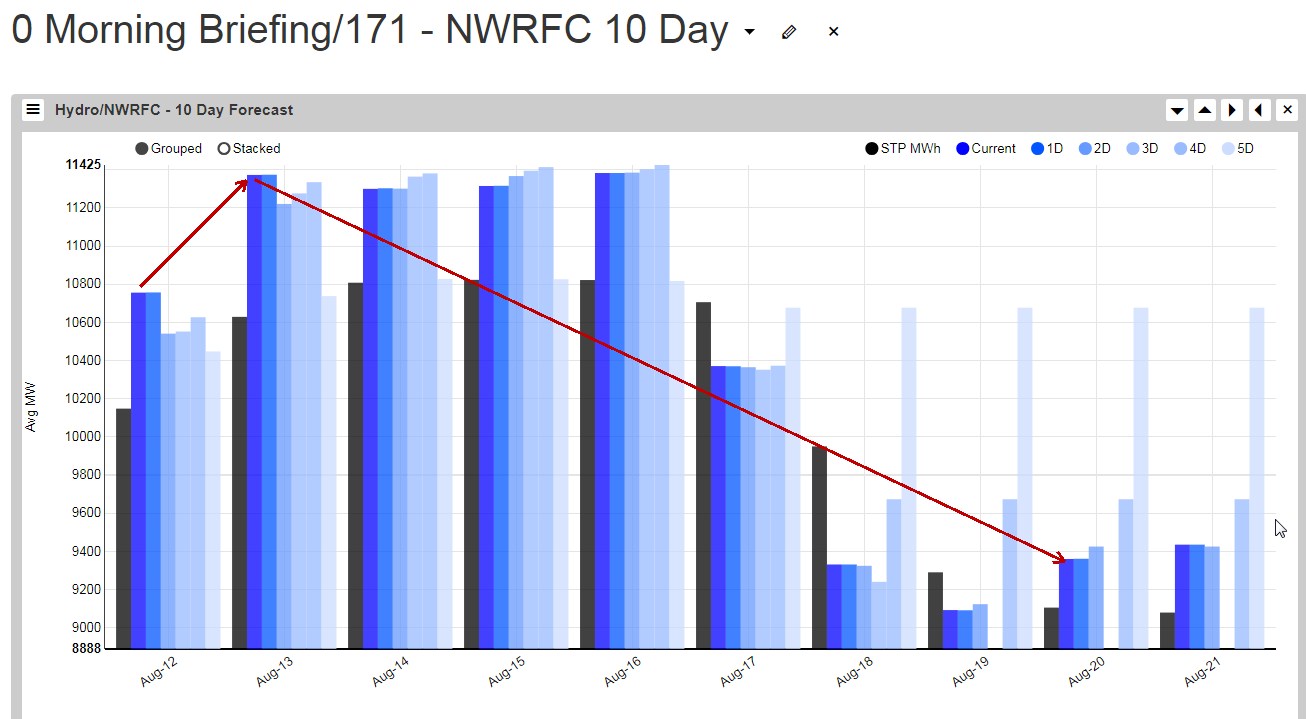 The Random Forecast Center’s forecast as of Friday had big drafts projected for this week, but we think those get revised downward off of the cooler temperatures. Note the significant cuts in week two, not sure those are realized either given that is when the NWS puts the warm weather back. Today is the STP, doubt we see anything material change, but then it is the Random Forecast Center, so anything (and everything) is possible. 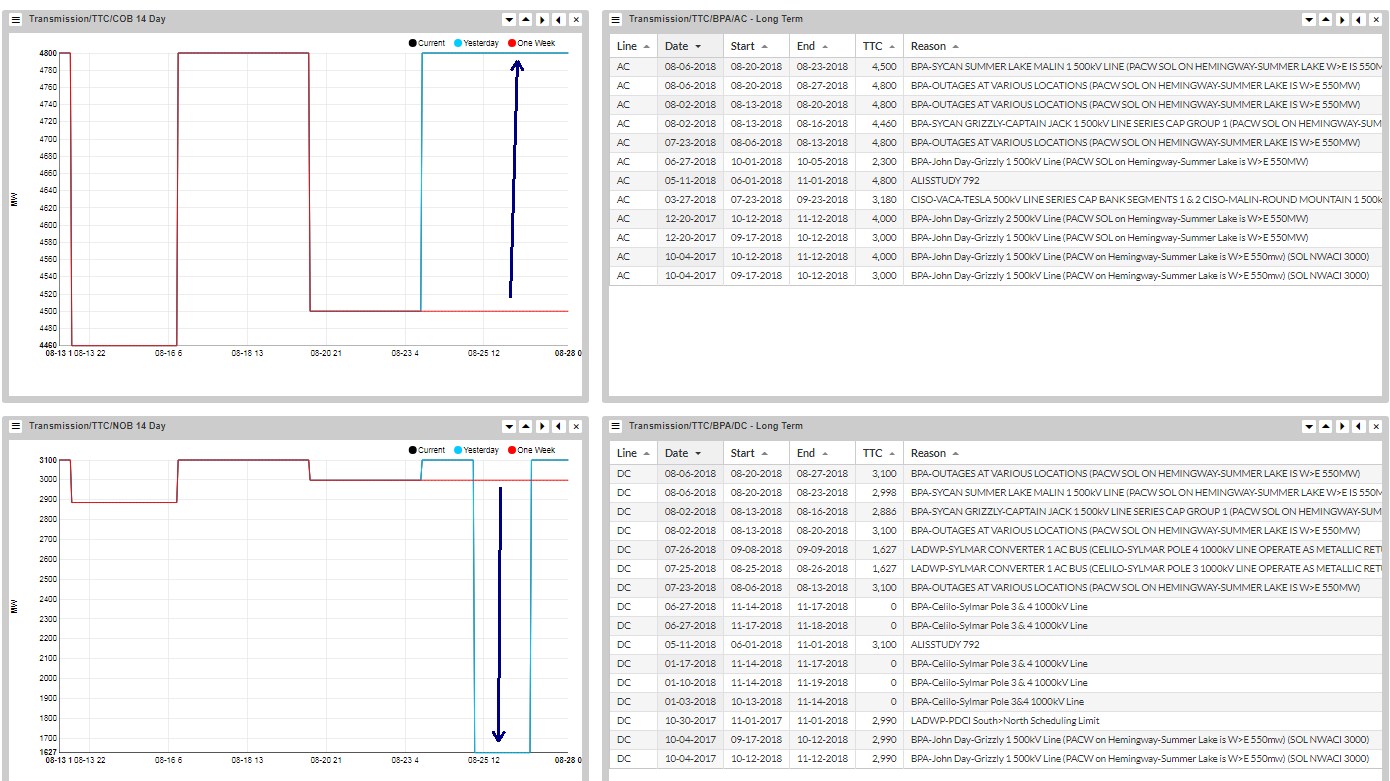 Where the AC giveth, the DC taketh. One line sheds capacity; the other increases it.

The Northern Intertie has been range-bound over the last two weeks, averaging around 1500 MWs of exports into the USA. The AC line is seeing a higher utilization rate, and Palo has increased its exports as its load decayed.

These are troubling times to trade, what with bid/asks of $20. Sometimes the best seat on the field is the bench; we think we are in one of those periods. The odds of Socal Citygate returning to the $20s are high which means all hubs will rally. Watch the weather, until it grows cold and wet, nothing much will change.