Check out the recent BOM moves on the HL:

Note the size of the rally and subsequent pull-back. Both moves are astounding, more so because BOM was only nine days in. The crash at SP was over $60/mwh, harsh, right? But more interesting than SP are the sheep-like moves at the other hubs. We get SP’s drop, it was mostly gas-driven. 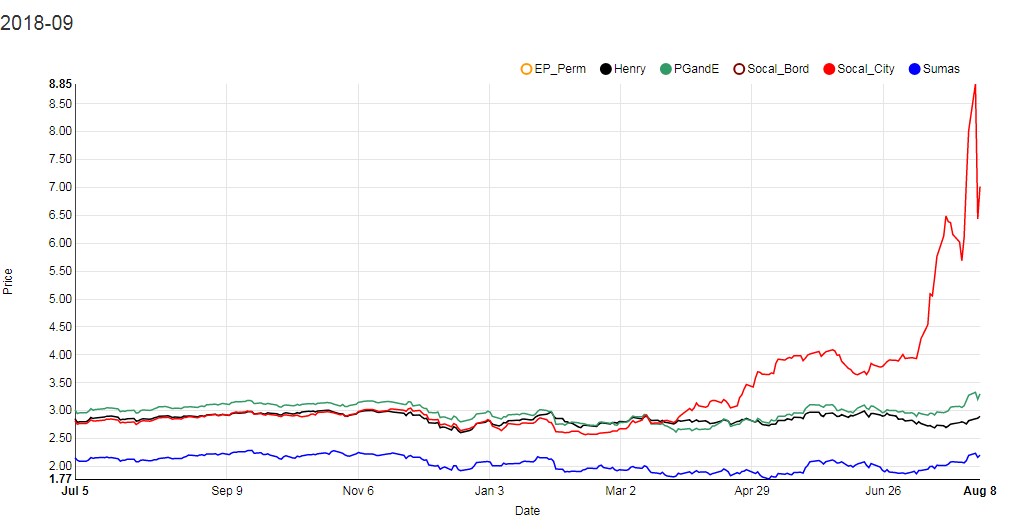 Note the violent pull-back from the highs at Citygate; likewise, look at the non-moves everywhere else. This week’s BOM gas is essentially unchanged at all hubs but Socal Citygate; now go back and look at BOM power prices. One would think every hub burned Citygate but only one does. This is “contagion” and illustrates how dysfunctional today’s WECC market truly is. Fundamentally,  all the other hubs should be clearing at their own marginal costs, but none are, they clear at SP’s marginal cost. SP is the only rational hub in the WECC, proof of that is in the LMP heat rates.

The last four days, SP15 has cleared around 11k; the other hubs around 30k to 85k. There are no 30k heat rate units, unless you look in your garage at that 2000 watt honda, let alone 85k. Plus, no hub came close to running out of power, they didn’t even settle on their highest heat rate unit, yet they traded 2-3x higher than that marginal unit. I guess we can call that the Virtual Transmission Line.

The rest of the Citygate strip has pulled back too, though fundamentally nothing has changed. There has been some confusion about the September outages at Socal. 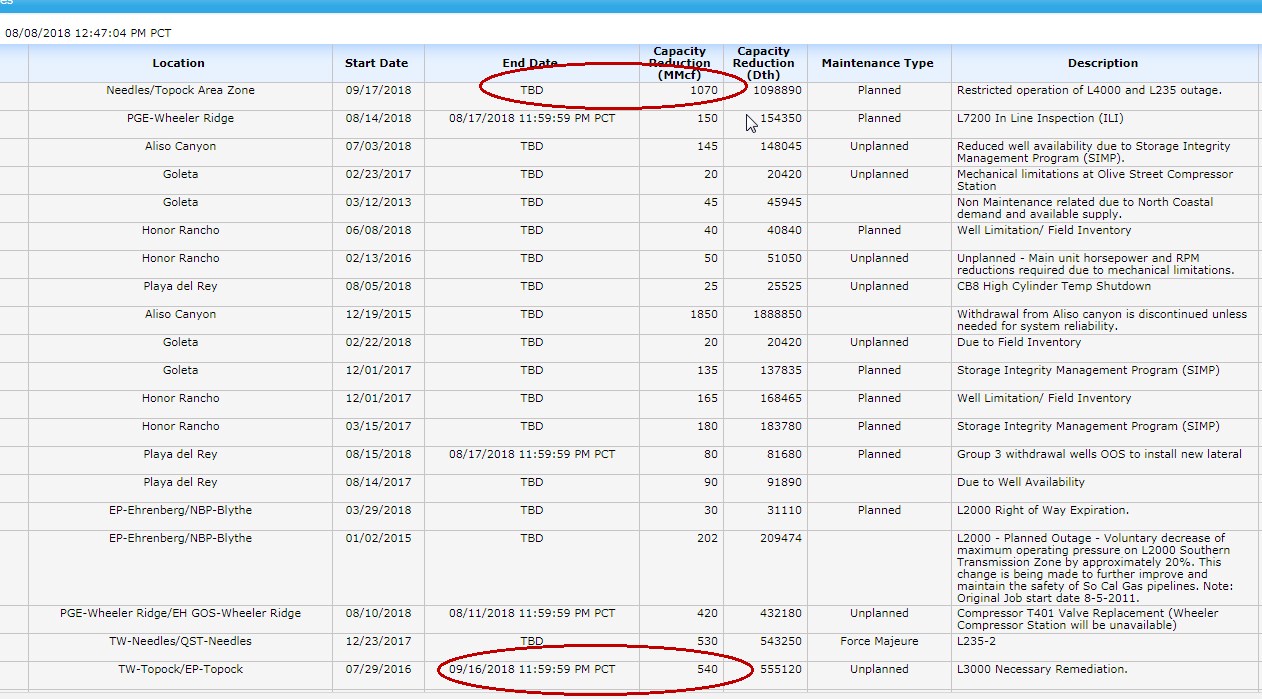 “Overall the North Desert Zone Capacity is not changing. What is changing is the location of the origin of the gas.   The system will now have the opportunity of having gas delivered once again at Topock . That will be mixed with Needles gas to make up the 276,000.  At the present all the firm capacity is at Needles .” 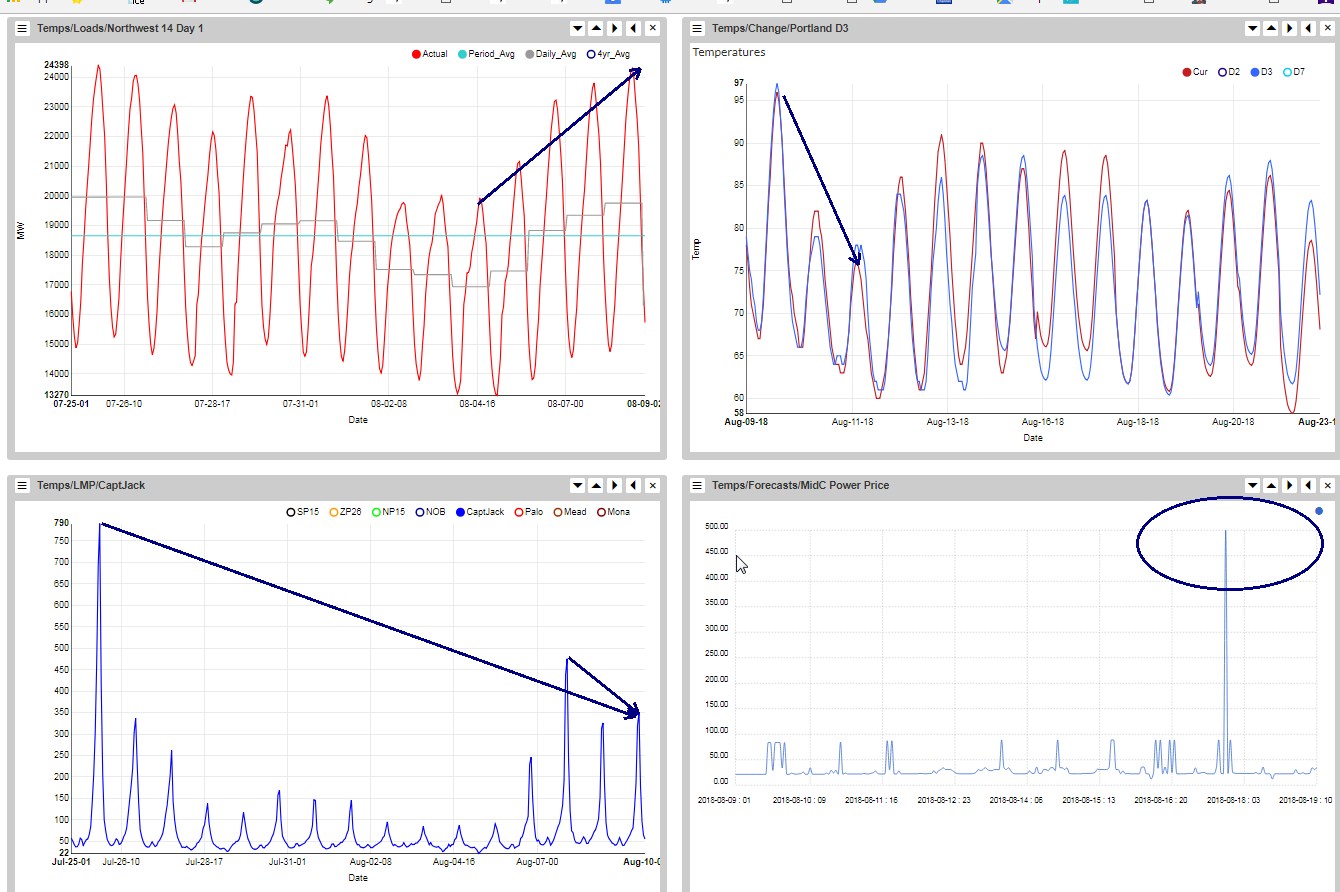 Demand surged at the MidC and set a summer high, but temperatures are poised to plunge over the weekend. Good thing, too, BPA is running low on water. The recent heat wave drove much lower peak LMP prices versus the end of July event.  Next week temperatures are slightly above normal, but loads will be 2k lower than yesterday. 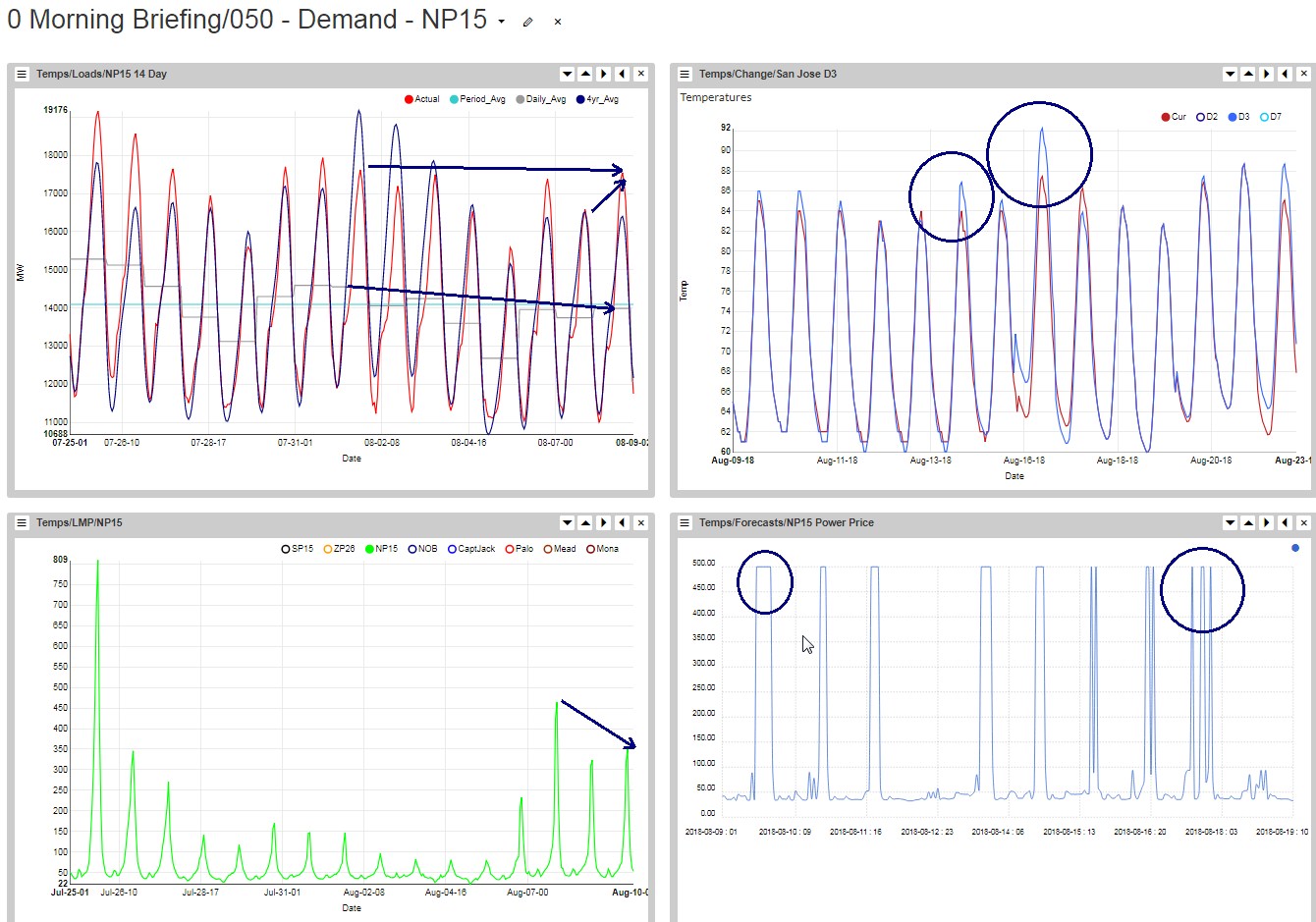 NP’s loads are slightly above normal and about flat to last week. Temperature forecasts are slightly cooler than three days earlier. But who cares about NP’s fundies, all that matters is Socal Citygate. Hah! 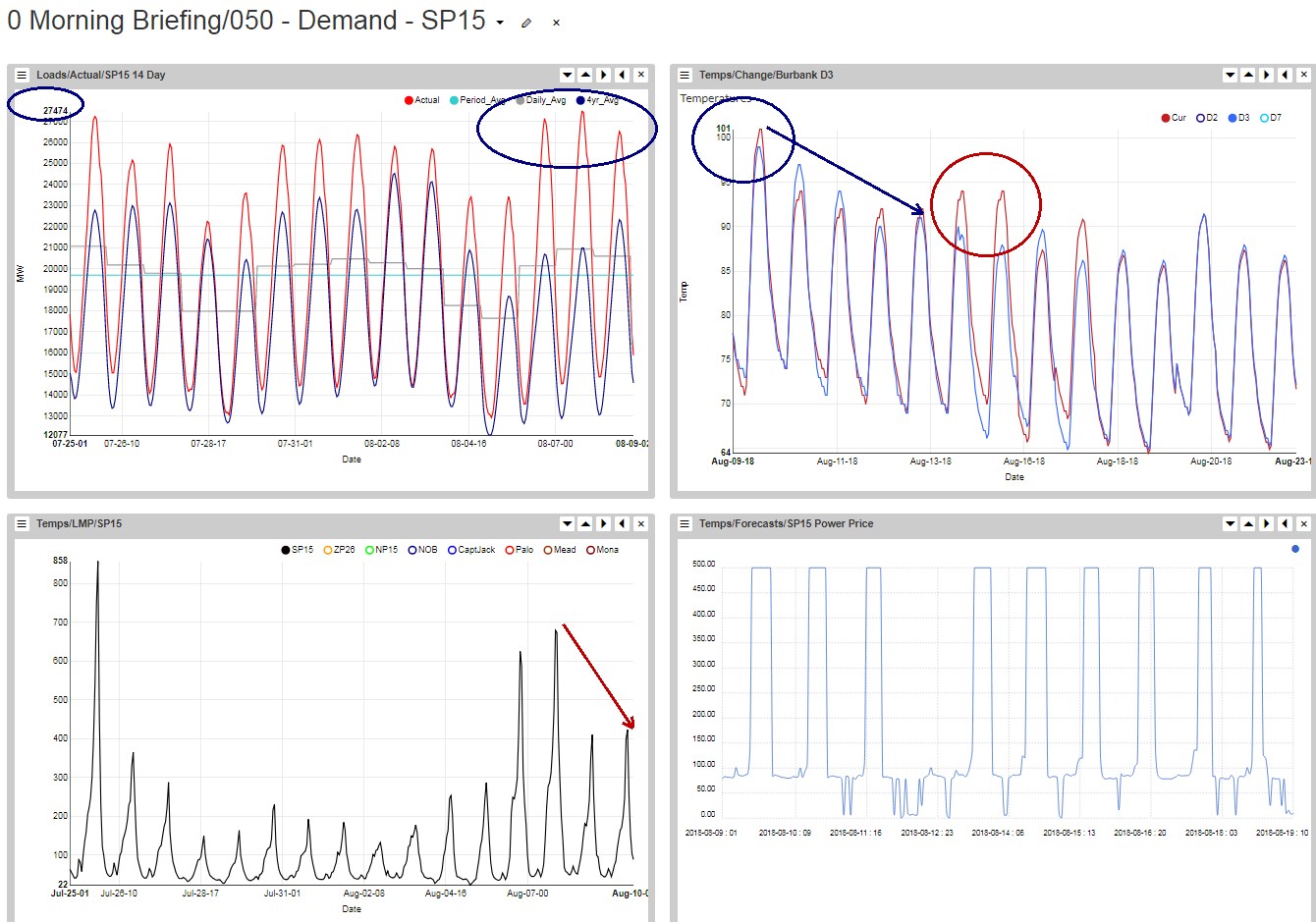 And Citygate’s fundies are driven by LA’s temperatures and those are crashing like so many trader’s PnLs. Still, the last three days have set near-record loads for the hub but prices were way lower than the July heat event. Though the temperature is cooler, the change in forecast versus three days ago is warmer in days 6-10. 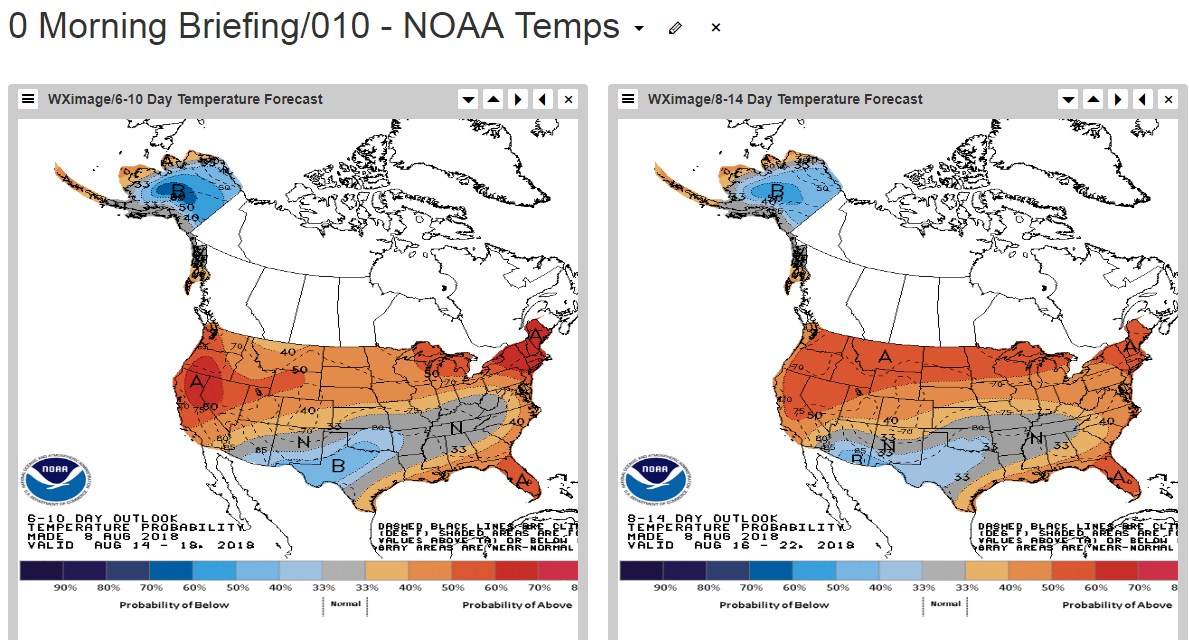 NOAA teases with another heat wave, not anything like this week’s, but these high pressure systems have a tendency to build both in intensity and duration and we’ll be watching this over  the weekend. The last thing this battered grid needs is more heat. 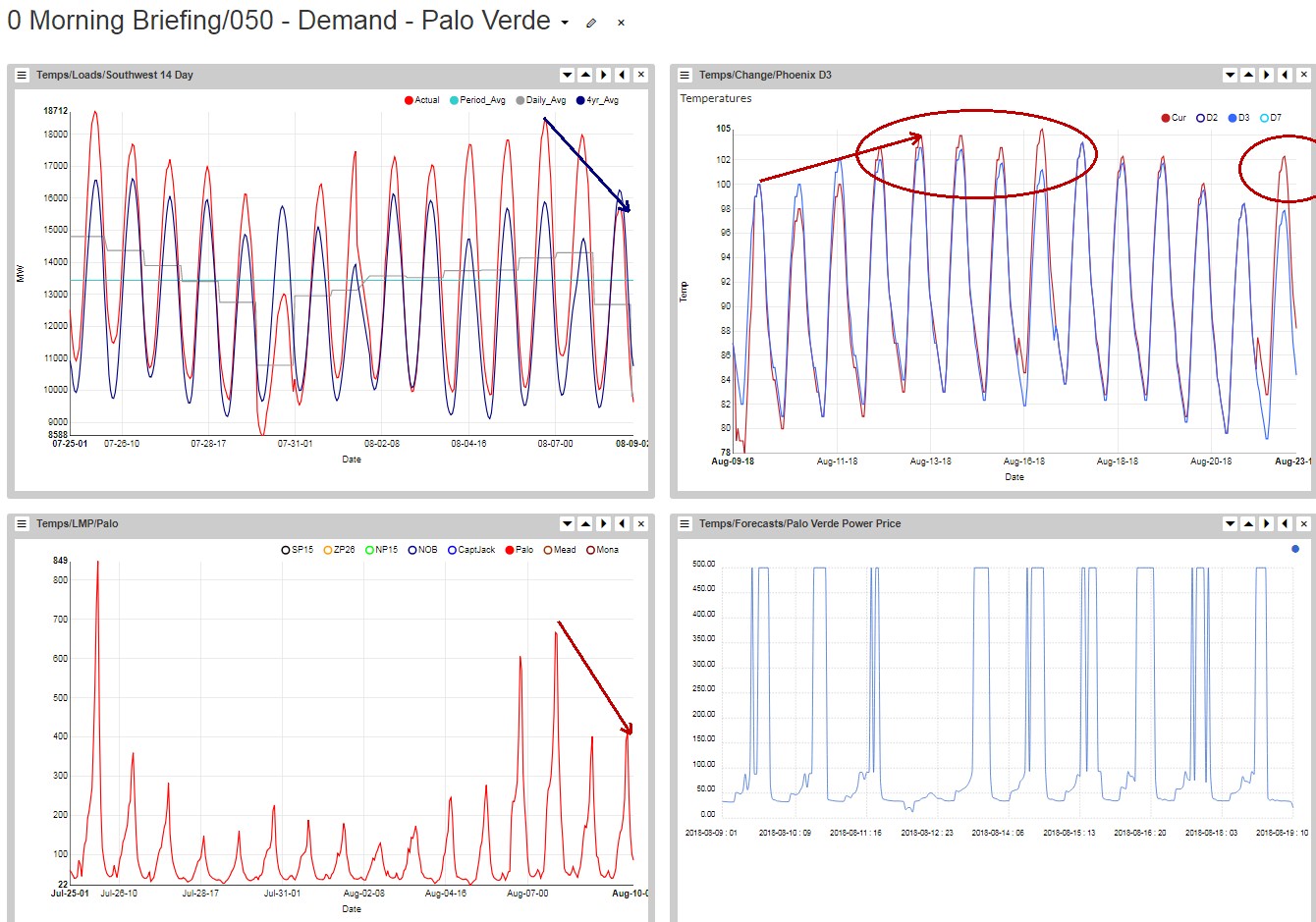 Palo’s loads tumbled yesterday, but that won’t last long, temperatures are expected to rally another ten degrees by next week. 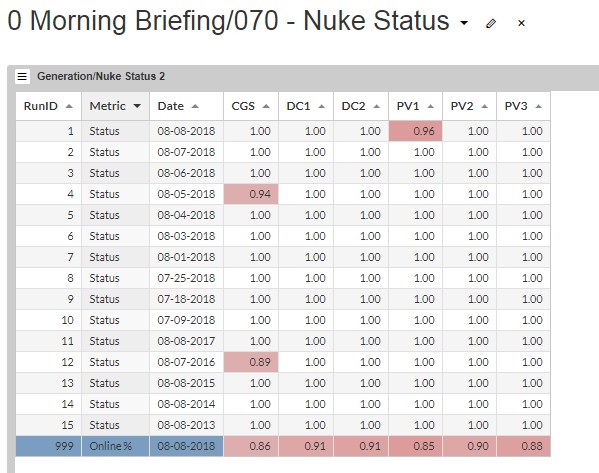 Trouble in paradise? PV1 burped, not sure what that’s about, but watch it.

Forget burping, how about gagging? Check out BPA’s wind energy (I mean lack of); there wasn’t a single turbine blade spinning across the vastness of the northwest. These last 48 hours may approach an all-time low at just the very time BPA needed it. 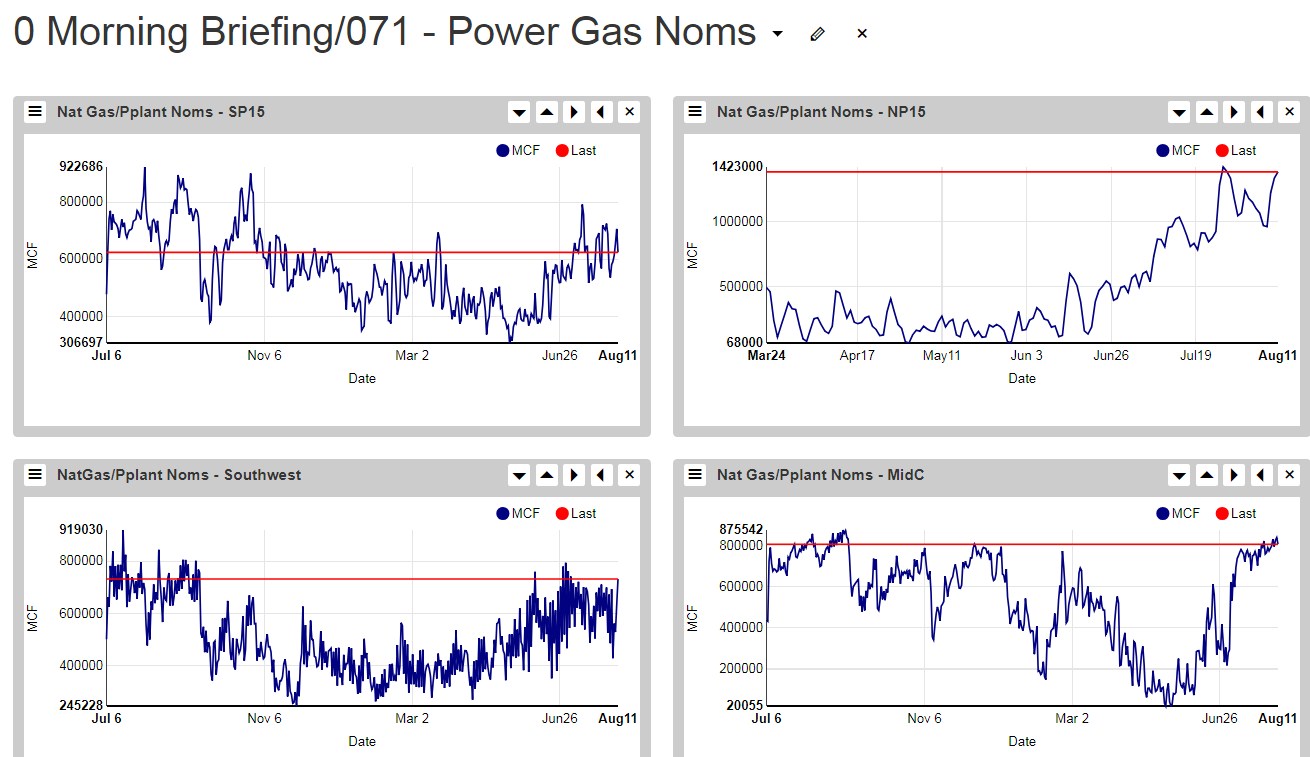 Noms at NP and MidC remain off the charts high, not so much at PV and SP. 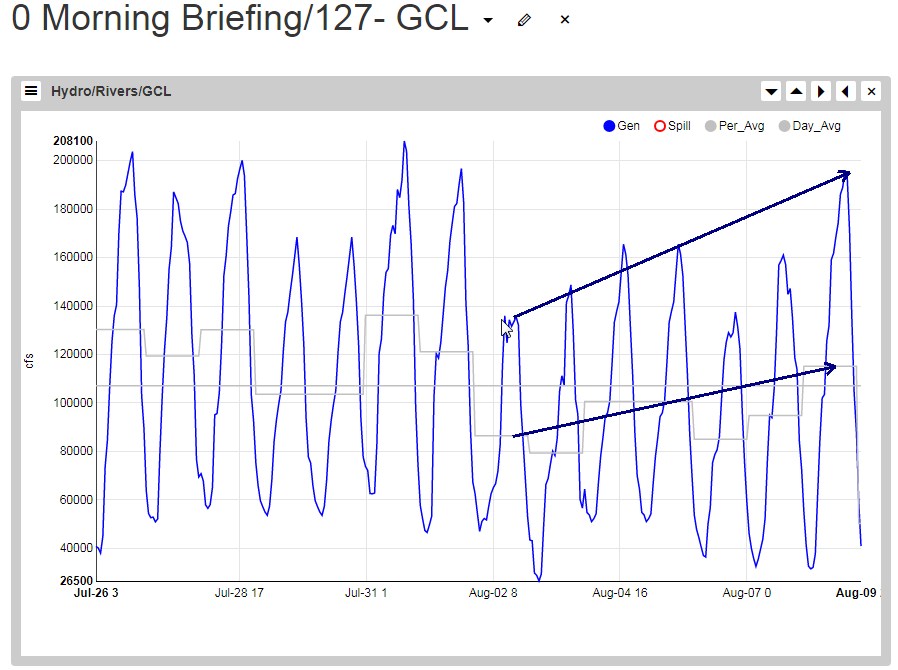 BPA had no choice but jack discharge at Coulee to meet loads. Week on week averages are up 10kcfs and the peak was up nearly 80kcfs, but the pond didn’t move.

We thought they’d draft deeper, we thought wrong. Flows on the Clark Fork are up, probably drafting the Flathead.

The Peace is setting highs, BC is not even cycling discharge there, its set at hydraulic capacity every hour and has been for the last week as the ute serves its own load and throws a few bones at the MidC.

The ISO is squeezing every kwh out of its hydro, they really cranked on New Melones the last few days. 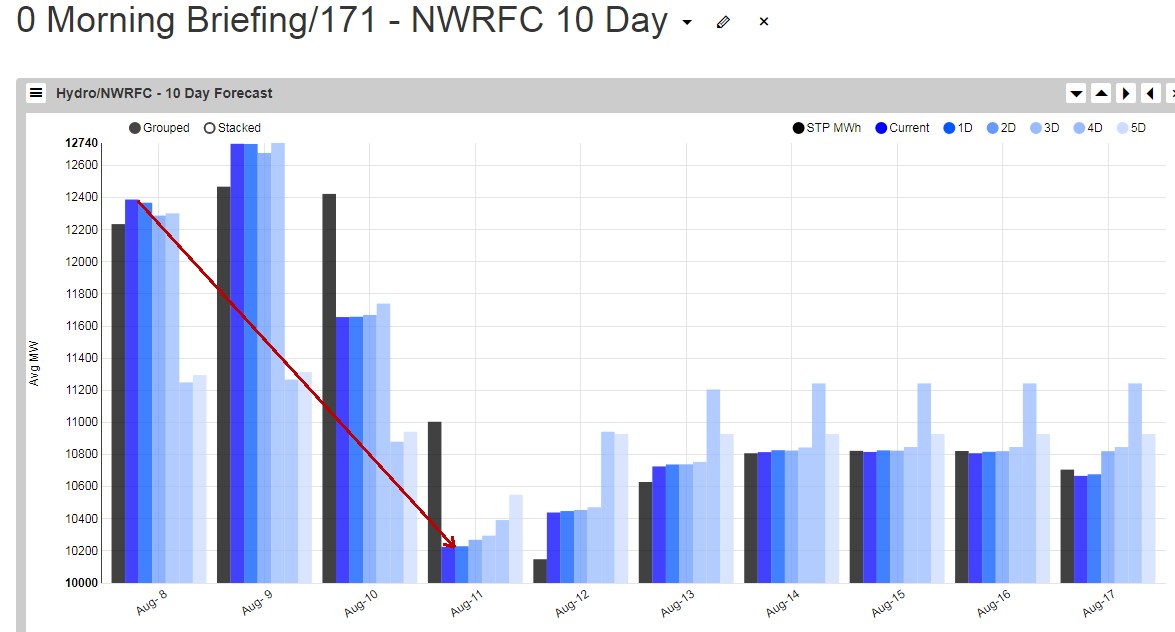 Big surge in Northwest hydro energy, per the RFC, then production tanks. So ,even though loads are dropping, so is energy from the hydro system mainly because BPA pulled hard this week. There isn’t much left to squeeze out of BOM. 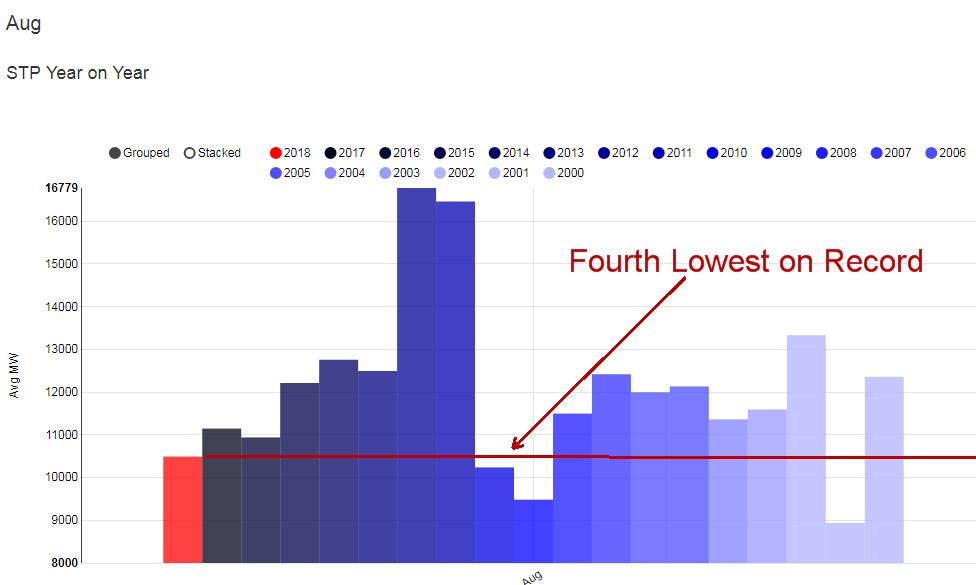 Both months are off 2000 aMW in the last two weeks. Those are not a reflection of what was pulled from August, they are merely corrections to stupid forecasts from two weeks ago.

The Northern Intertie hit a two-week high in south-bound flows yesterday. The NOB was full on HE18-20, but nothing is flowing on the COB, that line actually “bought” energy from NP15. Talk about tight! Nothing is flowing on Path 15 but Palo jacked its exports after seeing its loads tank.

Broken market, hard to trade. A respite is coming once LA cools down, hopefully Socal Citygate drops back to the $3 handles. If that happens, all of this term premium in every hub will be wiped out and long will be wrong. Don’t see that happening next week, but its coming.