Another heat wave in LA, another significant price spike (power and gas) in the dailies that ripples into the forwards, and then the WECC cools, at least per yesterday’s NOAA extended outlook. 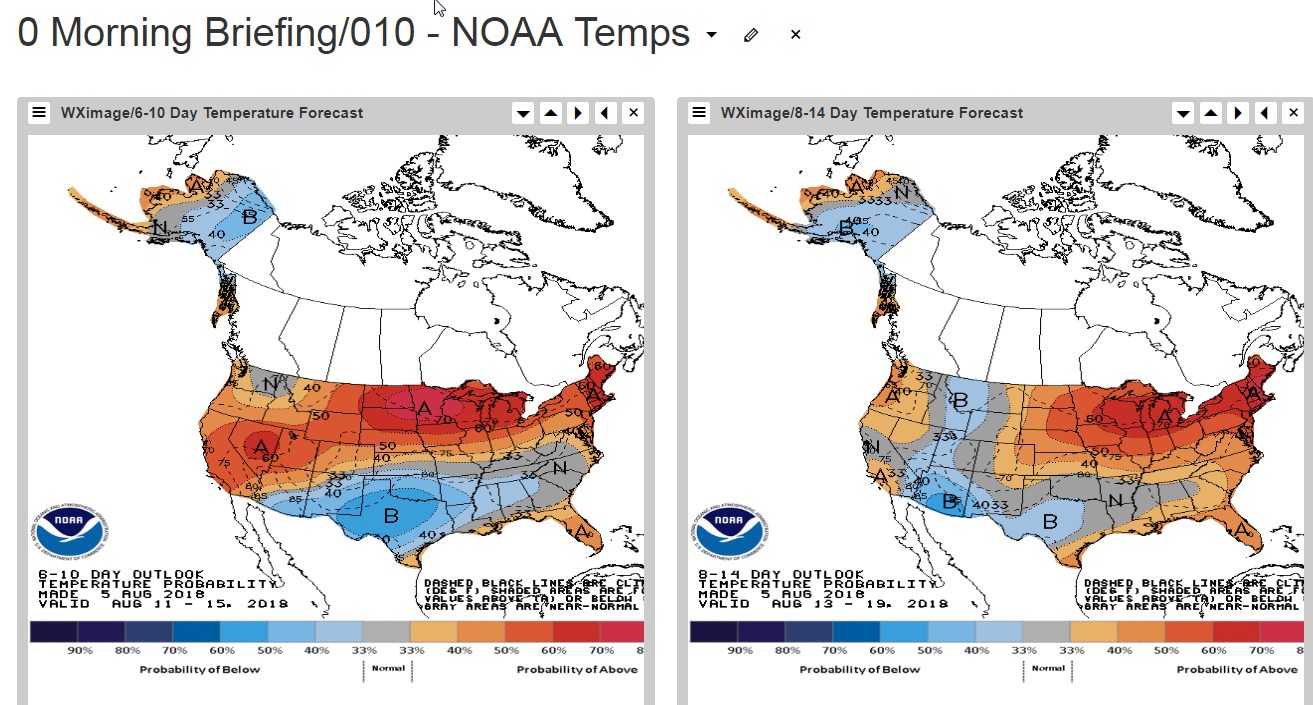 Unless Socal Citygate “cools” down and returns to the sub-$4s, we doubt the cooling in ambient air drives term prices much lower. And that price collapse may not take place until Sep 17, that is when 550 MMCF of Socal Import capacity returns; when the TOPOCK/NEEDLES outage is restored. It astounds me that it can take a year to fix a broken pipe; you’d think something as critical as 550 MMCF of transport would be fixed in a few weeks, you’d be wrong. 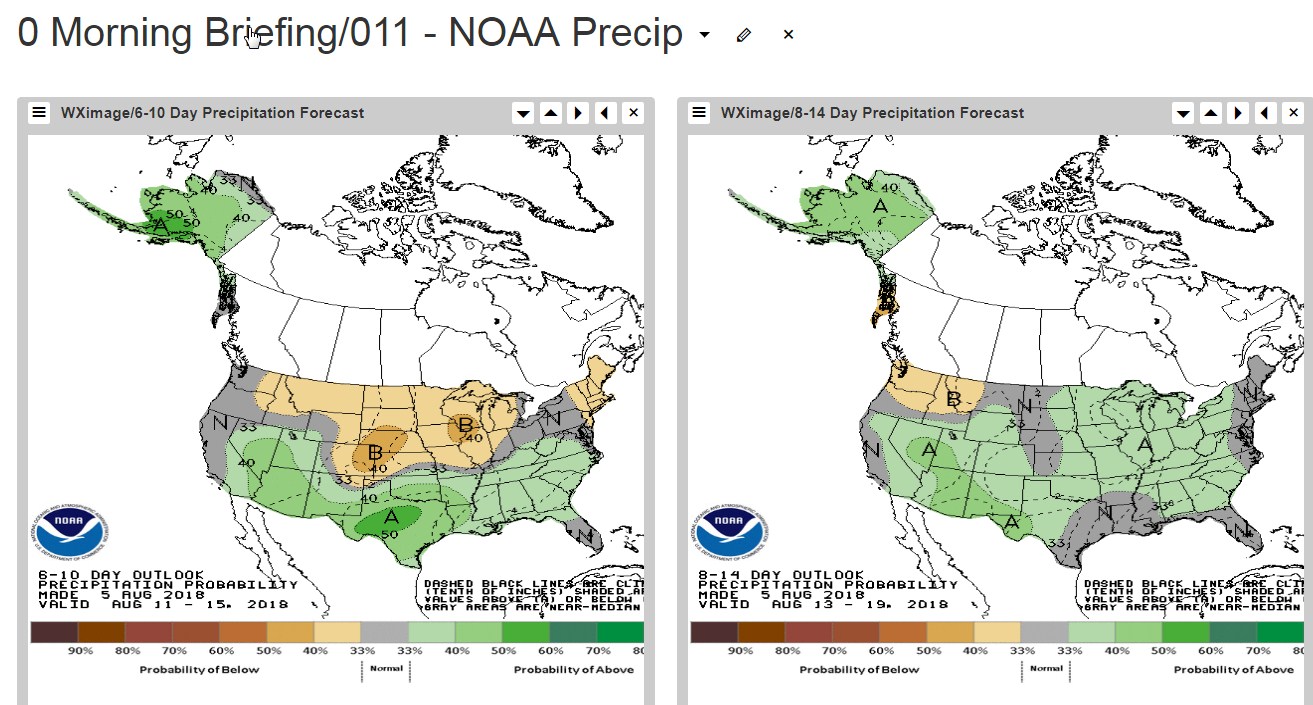 You might be wondering why we are posting “Precip” in August – Monsoons, my friends; these summer storms crush Southwest demand, and it looks like there will be a few days of this over a couple of weeks. Note the bone-dry Northwest, nary a raindrop to be found. 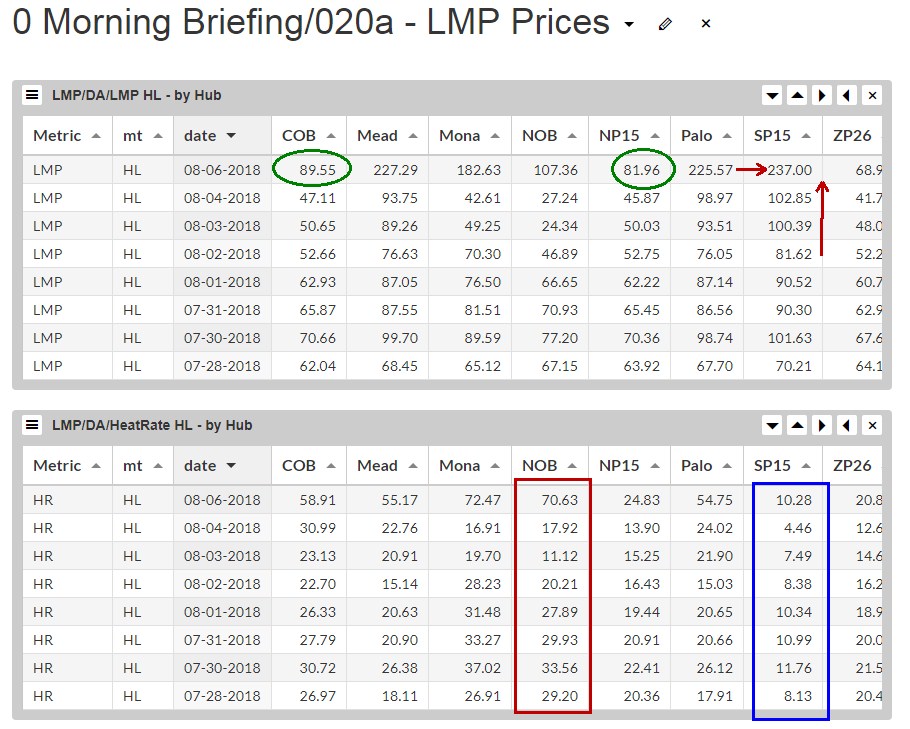 We said it would be hot, and the ISO dailies confirm; SP is back to the $200s and Palo and Mead are right there with it; congestion is nearly non-existent which speaks to how desperatly the ISO is trying to avoid Socal Citygate gas. From a heatrate perspective, however, one could argue the SP15 markets are BEARISH; contrast SP and NP, the latter has twice the heat rates and forget about NOB, today’s heat rate is 7X greater. 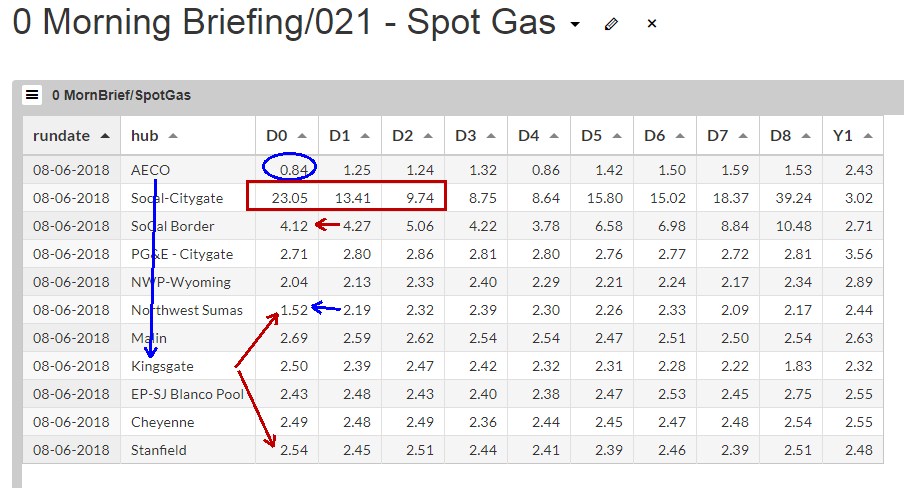 It is all about gas and Monday’s cash price is $23.05 at Socal Citygate. Not quite so bullish at AECO, the Canadians are almost paying you to take their gas, the price is under $1.00. Check out the Stanfield/Sumas spread that is a buck. Wow, some massive margins for Puget’s gas units. Another oddity, the AECO-Kingsgate is a buck as well, but both are Canadian. Huh! Maybe it is time to extend the Northwest Pipeline to LA? 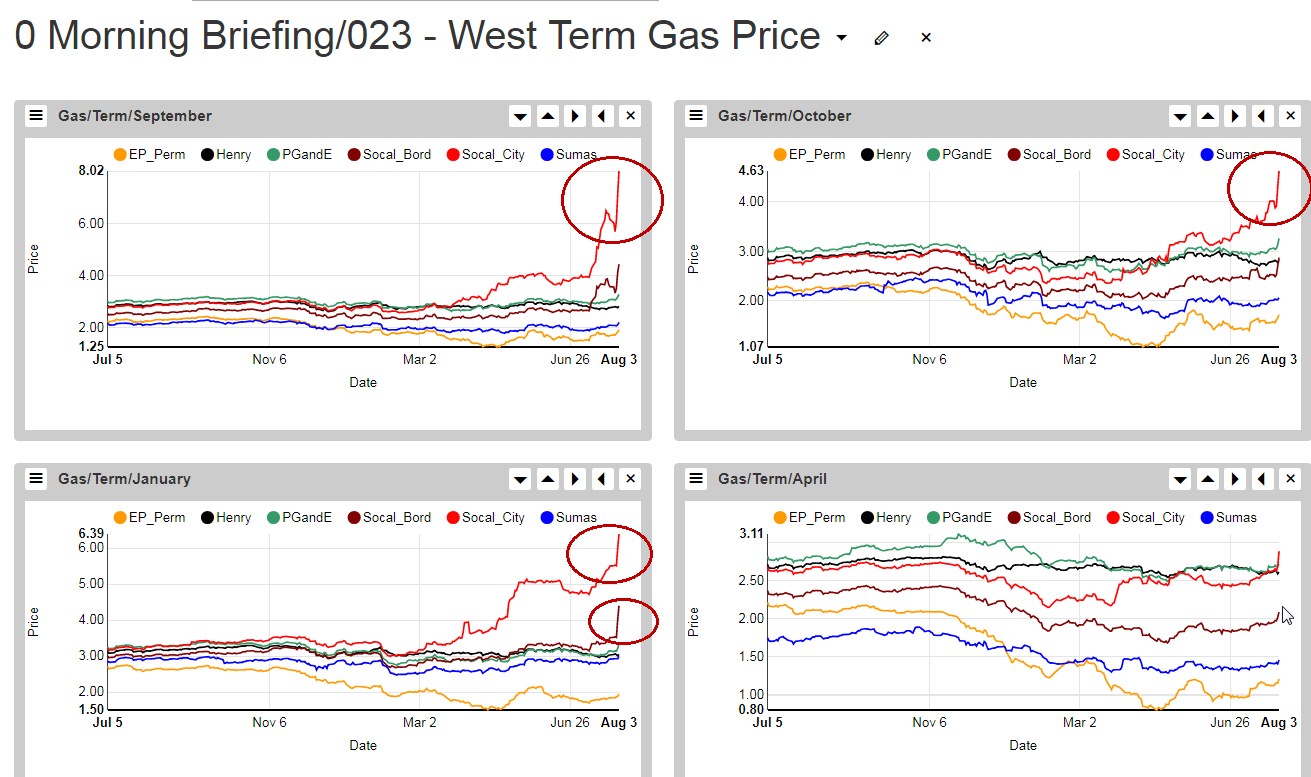 Socal Citygate is soaring in the terms; it will take several days of weak cash to break this trend, and that may happen if the Transwestern fix takes place in Sept. Check out the weak prices in the Permian, under $2.00. California should build a pipe from the Permian to LA, at these spreads they could pay for it in a few years.

Today’s sendout (Socal) is less than the heat event from two weeks back, but weather grows warmer over the next couple of days. 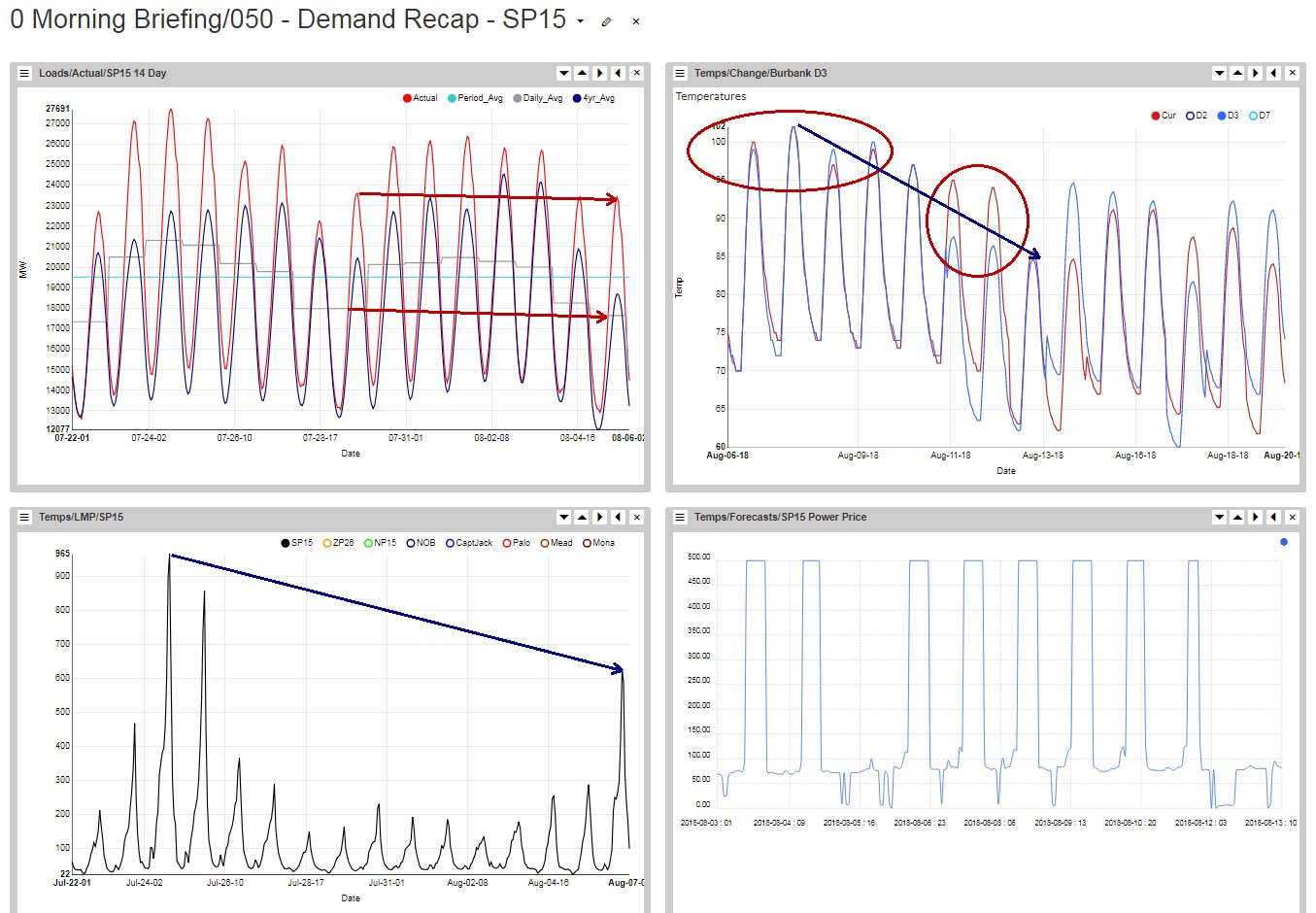 Burbank realizes a few days over 100, then tanks back to the 80s. As of today, there are no signs of another heat event in August. 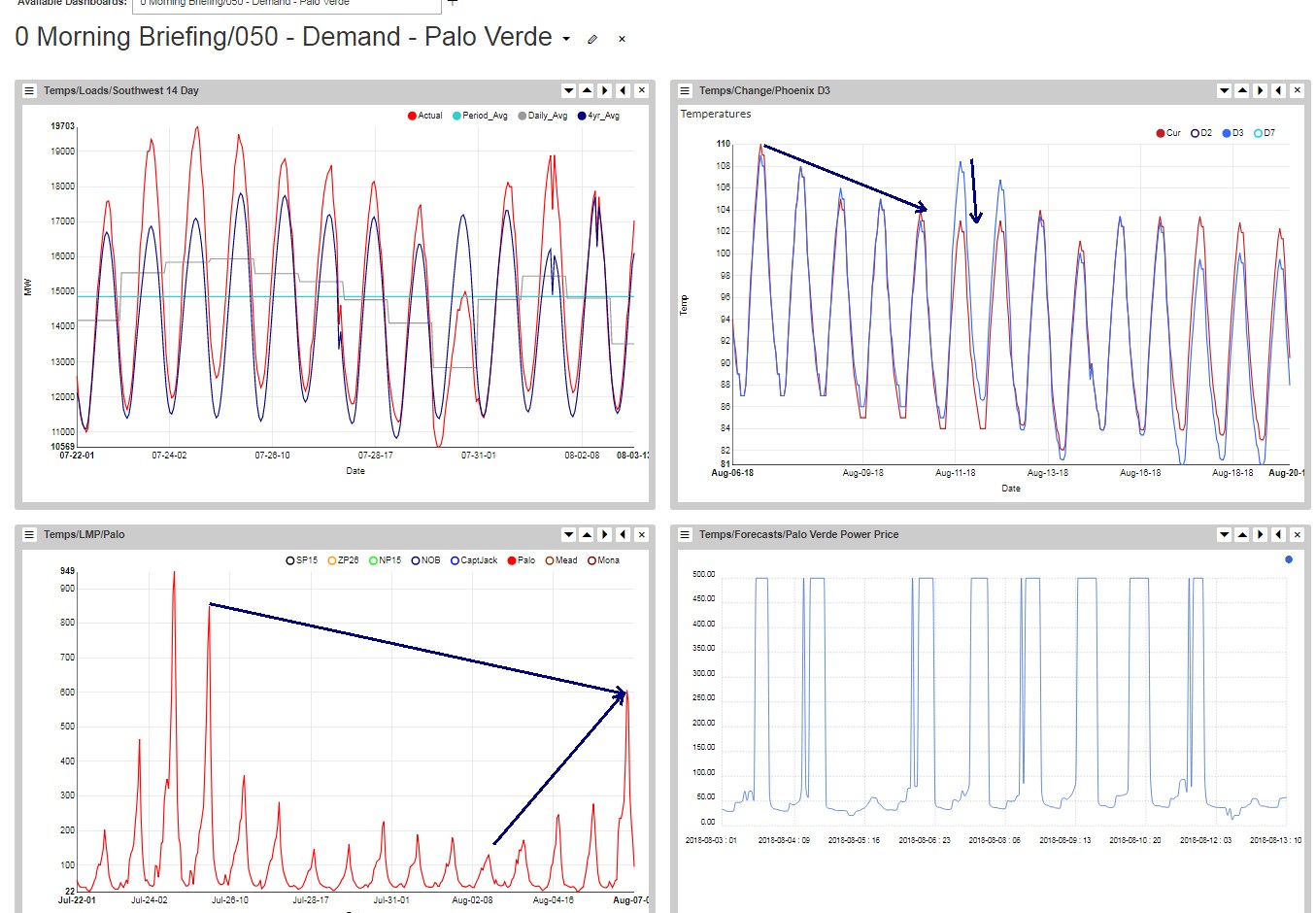 Phoenix posts its hottest day today, then sees a ten-degree slide over the rest of the week. The forecast as compared to Friday’s is also cooler starting on day 6. 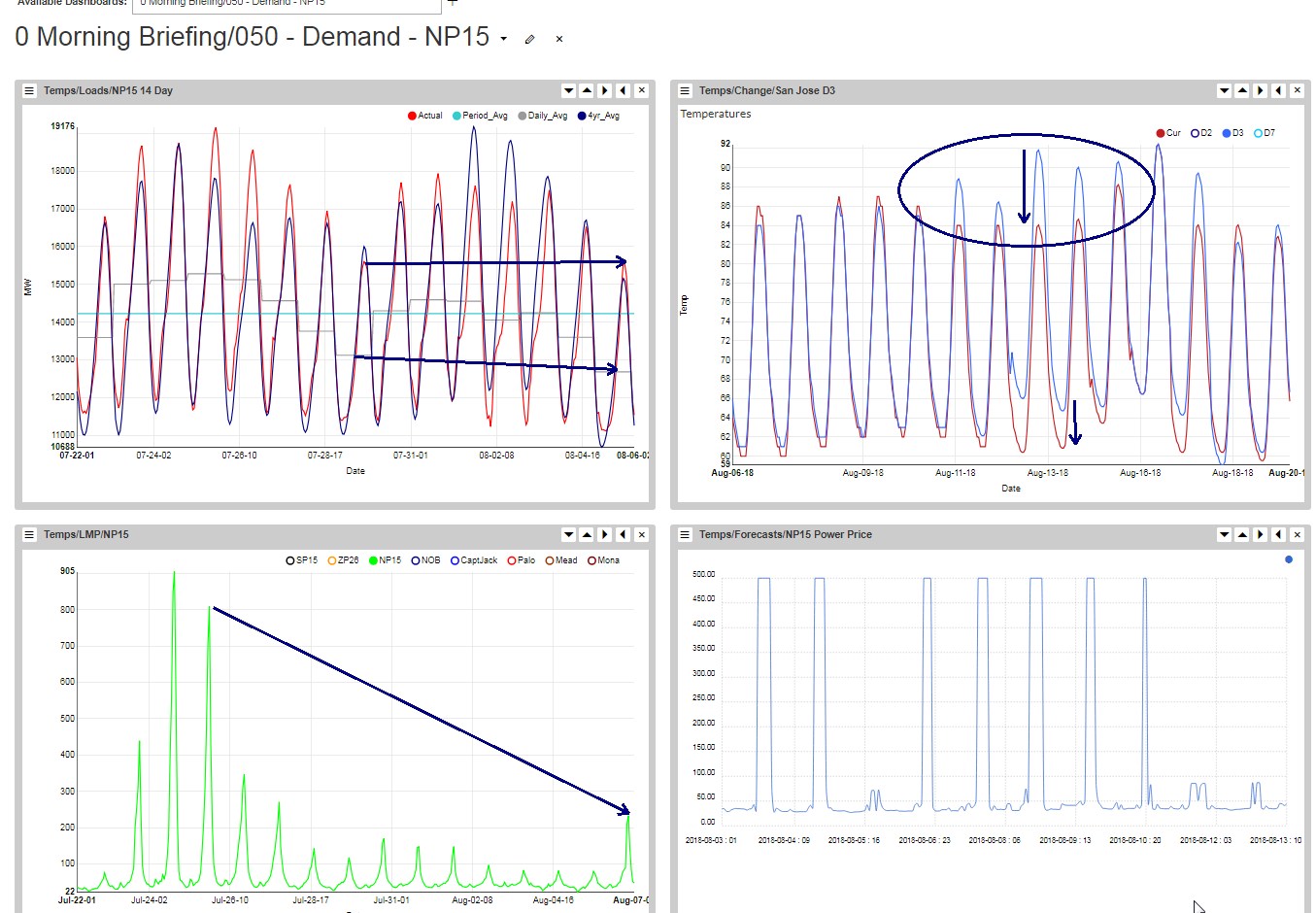 NP’s loads are sideways, so is the hub’s temperatures. All of the heat is south, there are no “events” in the Bay Area, yet the LMP clears in the triple digits while PG&E Citygate settles <$3.00. Contagion, we wrote about this a week ago. 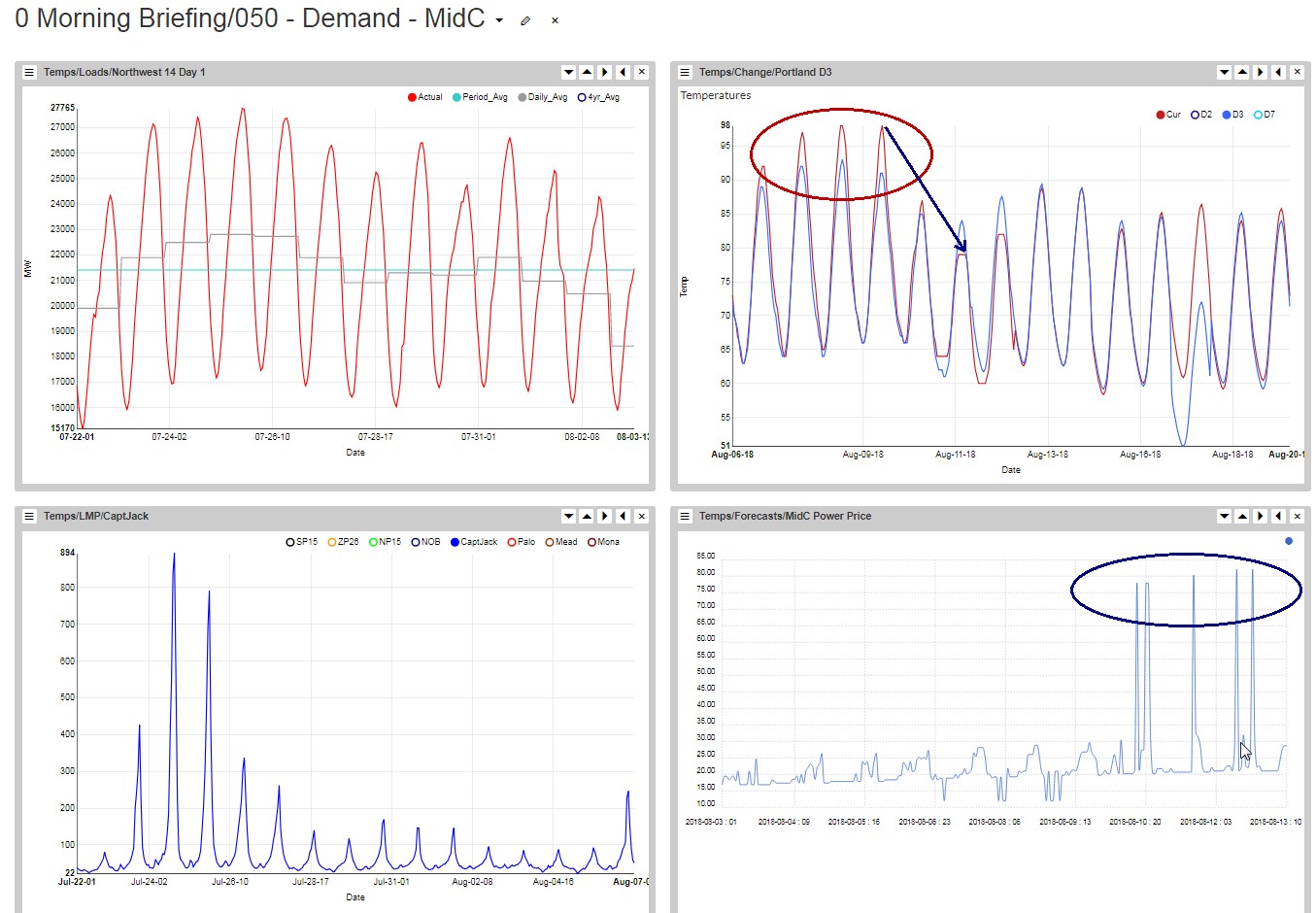 Portland grew several degrees warmer versus Friday’s forecasts; the heat lingers through most of the week, into Thursday. The system was already tight, these four hot days will stress it even more. Price-Wise, all that matters is what happens at SP15; until that hub returns to normal every other hub will command premiums. 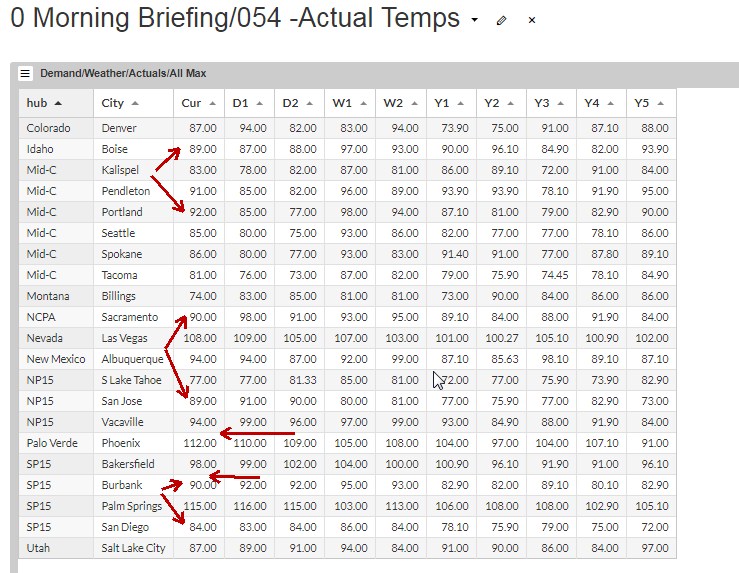 The above are temperatures as of yesterday. How often have you seen Portland warmer than Boise in the summer? Or San Jose and Sacramento with the same temperature? San Diego (the Airport!) was hot, almost as warm as Burbank.

Not a lot to report on the generation front. A few ISO outages, all the nukes are running, and renewables are bouncing around. 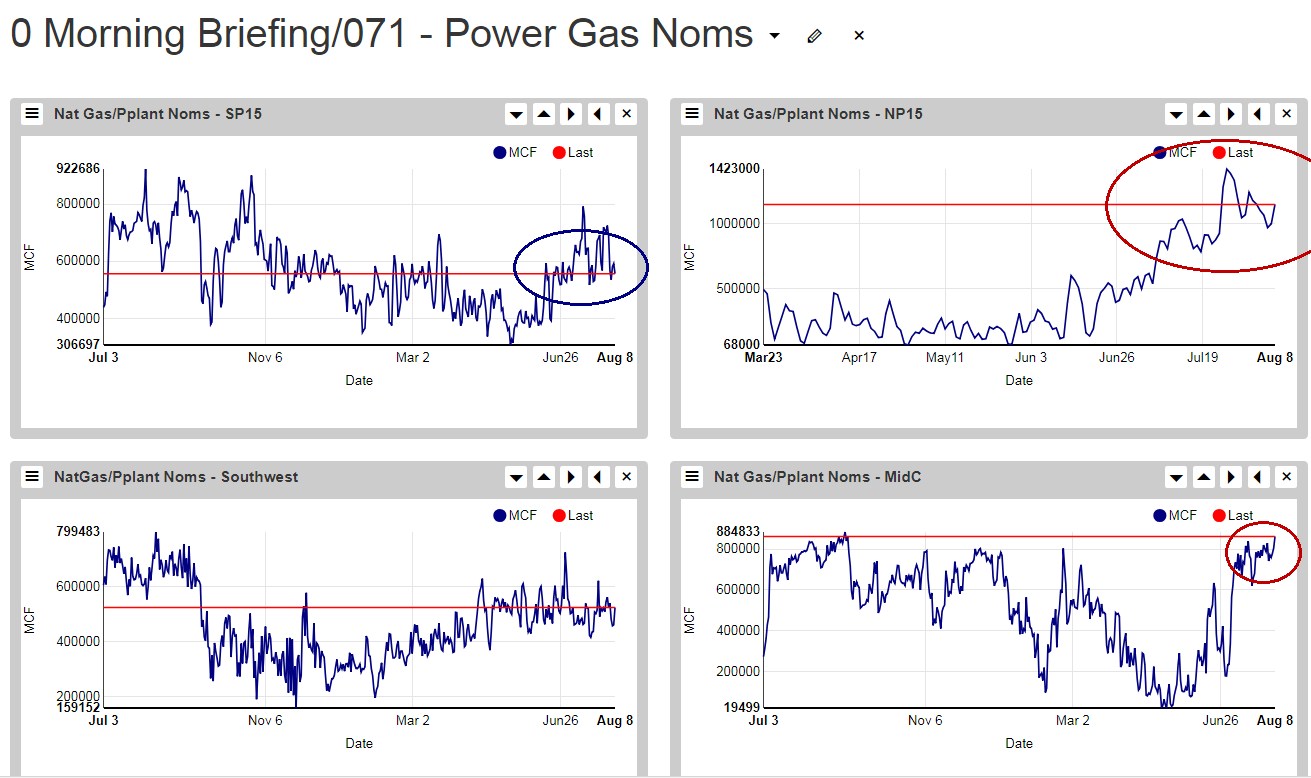 Those Noms at the MidC are newsworthy; the hub set a yearly high for today and with a four day build, a new high will be made. Same with NP as that hub has become SP’s swing resource. 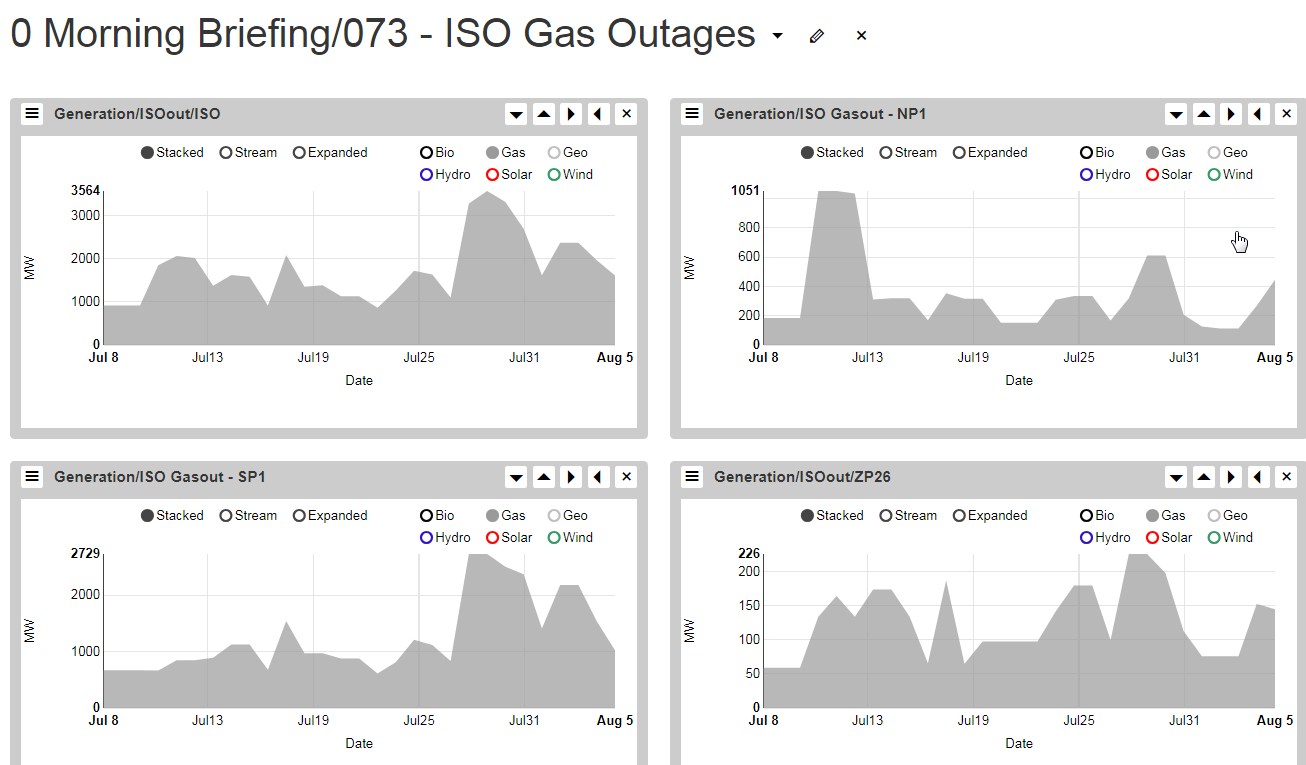 It almost doesn’t matter if gas units are offline at SP given the spot gas price there; NP units matter, so do ZP, and there just isn’t much offline at either.

SP’s solar hit some new highs, rallying off of last week; so did the hub’s wind, the weekend aMW of wind was the largest in months. Not so much at NP and the MidC; the latter had next to no wind yesterday.

Coulee quit drafting but we’d expect some drafts over the next four days to serve loads. The RFC confirms in its 10 day: 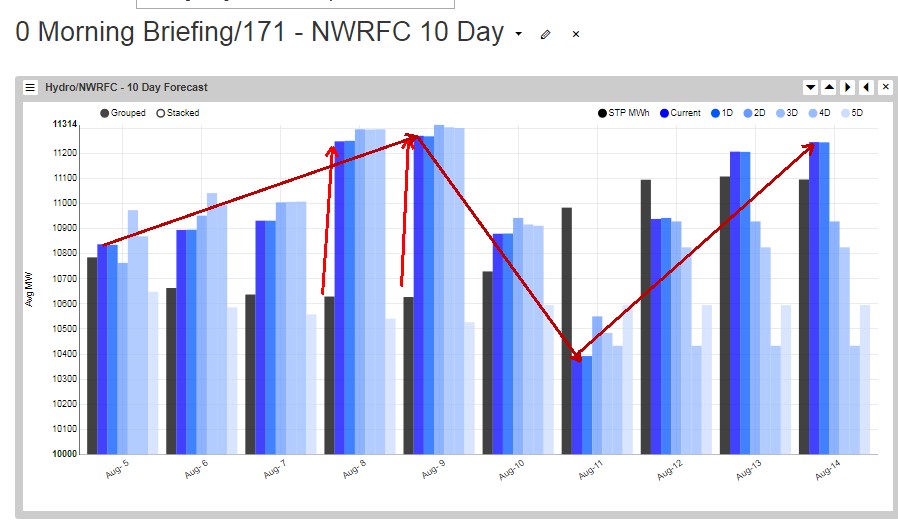 We get the bumps, BPA has no choice but jack drafts to meet its loads. That additional water is coming out of the ponds, putting the Northwest in a more significant deficit position. No reason to hit the panic button, the price is already at panic levels. I wonder if Northwest ratepayers realize how much Socal Gas’s bone-headed maintenance policies have cost them? After all, this contagion of price is all because of $20 socal citygate; if SCG were trading at $3.00, MidC would be clearing at $40, not $100 or $200. The collective cost of Socal Gas’s outage, for the Northwest, must be in the hundreds of millions. The cost for all of the WECC is about the price of a one bcf pipeline from Sumas to Sylmar.

The Peace River system went baseload over the last couple of days, reflecting robust BC Hydro loads and consistent exports to the Northwest.

Generation across the mainstem Columbia and Snake Rivers is off, week-on-week, reflecting two months of no rain and natural river flows that aren’t flowing. Meanwhile, the spill continues. It would be fun to compute the Cost of Spill for summer 2018; it must be in the hundreds of millions at these price levels. High enough to serve lobster and caviar to every homeless person in the USA until Christmas. 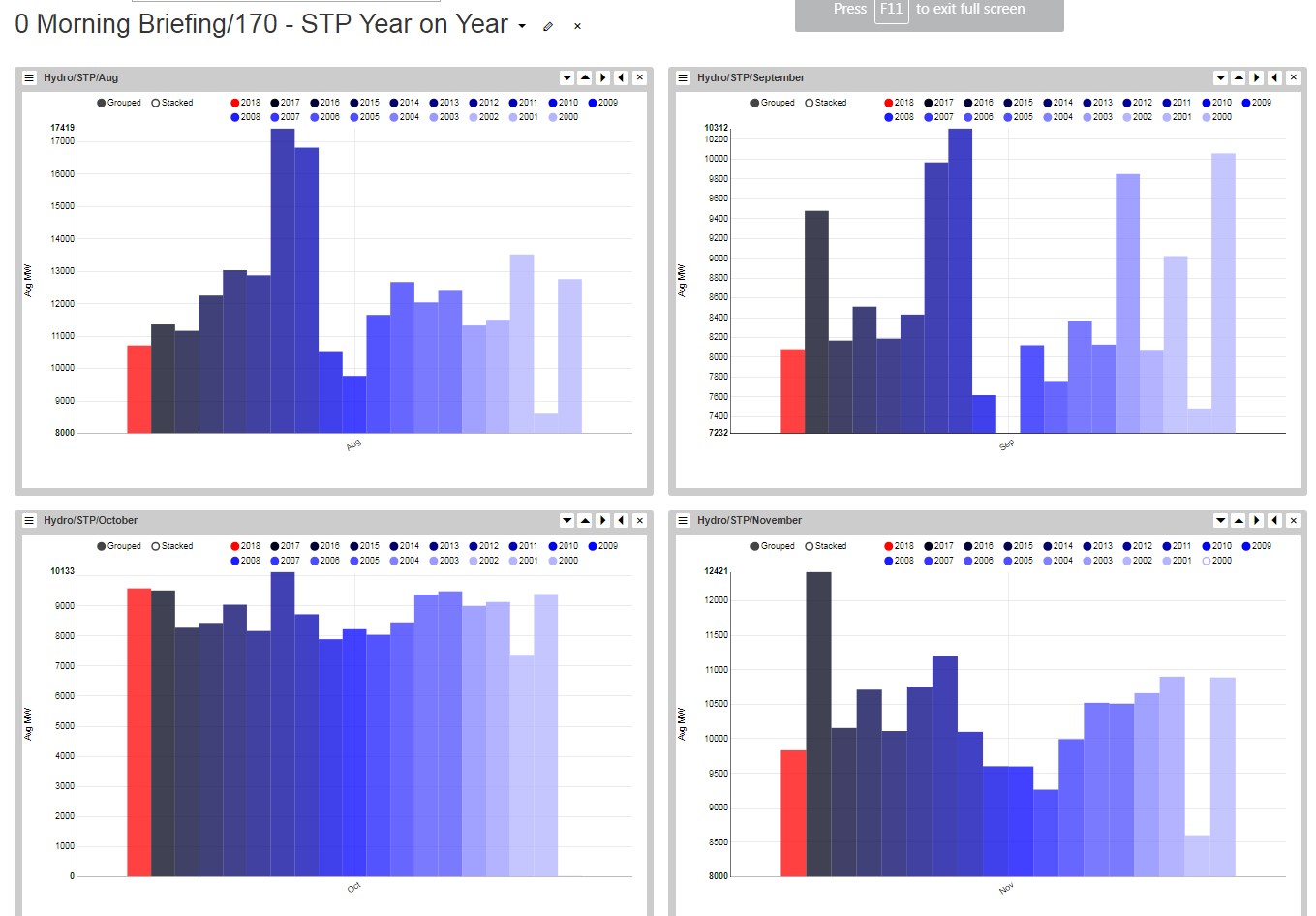 Today is STP, and we’d have to guess that BOM rallies some, after all, it is already one of the lowest August in the last twenty years. Sep won’t rally because someone has to pay for Aug; perhaps big haircuts in Oct, the RFC has that month as one of the wettest. 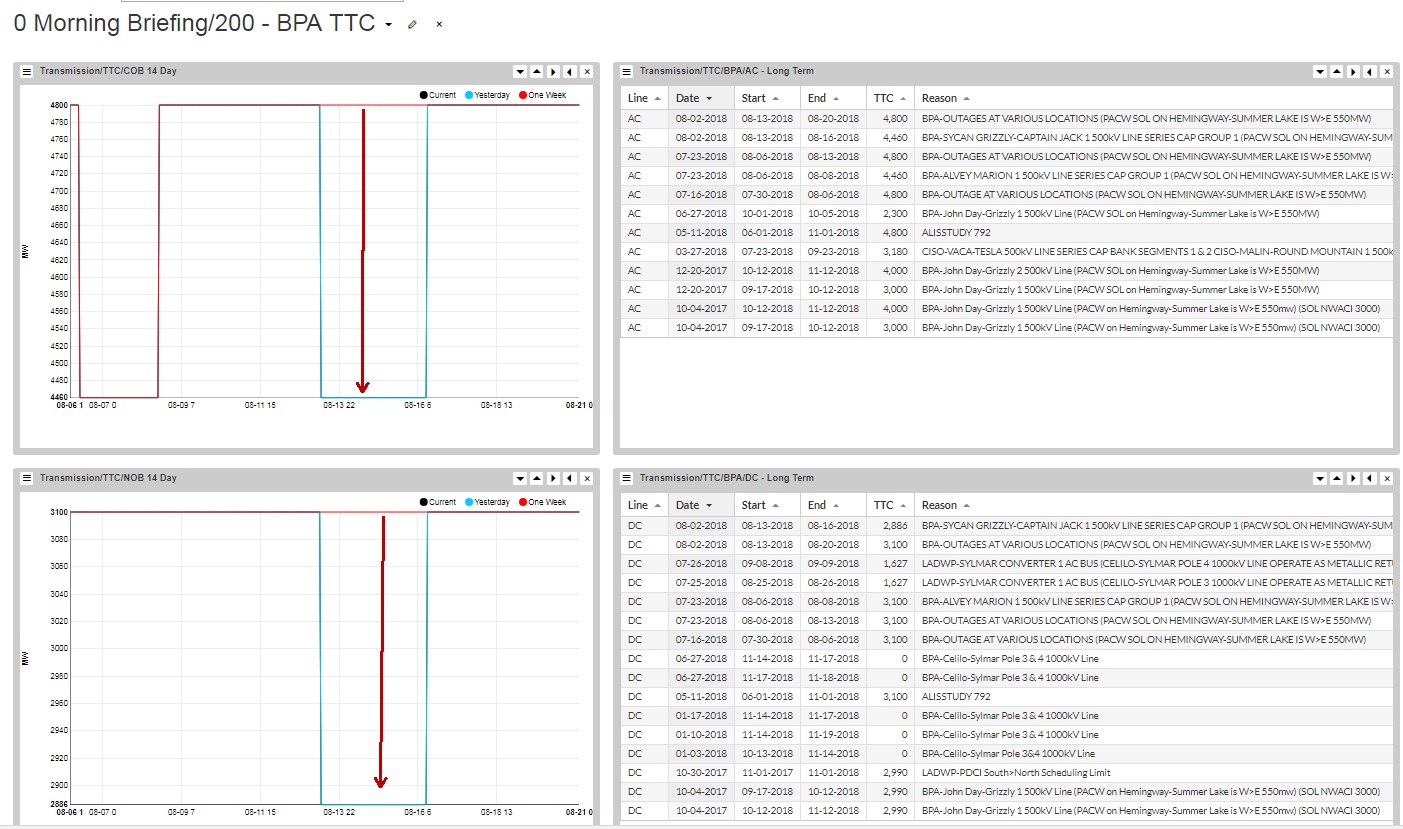 A couple of minor cuts on the DC and AC this week; each short-lived and just a few hundred MWs.

The Northern Intertie is flowing less energy into the MidC, week-on-week. The DC is back to mostly full while the AC is never full. Another under-utilized line is Path 15; nothing is moving north or south there. Instead, ZP is sending every kw to SP via Path 26.

Things could get crazier than they already are over the next couple of days. This week is not the time to be a contrarian and shorting the market; that day is coming, but it isn’t today.