Contagion – “the spreading of a harmful idea or practice.”; “the contagion of disgrace.”

Our thought of the day is Contagion of Price. SP15 suffered a genuine meltdown, the hub literally ran out of gas but didn’t run out of power, and the price appropriately exploded into the stratosphere setting the highest prices since the Energy Crisis. SP15 was exciting but paled in comparison to how the rest of the hubs adopted SP’s price regardless of their underlying fundamentals. It was like there was a contagion of price that seeped virtually across the transmission lines and permeated every WECC hub.

Check out the LMPs; you’d have thought there would be massive congestion when SP trades $1k, right?

And you would have thought wrong; there was very little “relative” congestion throughout this week.

But all WECC cities were scorching hot, load records fell across the WECC, right? 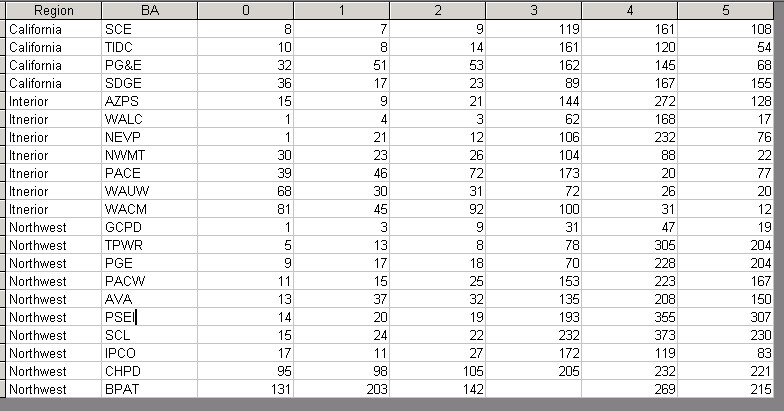 No, not true up north, but kind of correct in the South. The above table is ranking of loads by region by Balancing Authority. The columns are Days where Day0 = July 25, Day1 = July 24, etc. The values are the Peak Load Ranks for summer (June to Sept) over the four years. A rank 1 means that BA had the highest summer load in the last four years;  a rank of 131 (BPA yesterday) meant it was the 131st highest summer load.

Yesterday was notable for a few utes, WAPA Lower Colorado and Nevada Energy set peak highs (ignore Grant, we think in the confusion of triple-digit prices their load analyst got confused). California? Edison had its 8th highest load day; PG&E its 32nd, SDG&E its 36th.

NOTE: Several BA’s are missing (Salt River, PSC, etc.) because they did not report a full two weeks of loads. Throw LDWP and IID in that group, too – both simply quit reporting loads over the last five days. Perhaps they felt they were giving up “trade secrets”; EIA should fine them a few million.

Contagion. The ISO set price for the WECC and every greedy hub accepted that price, then bogarted their energy to keep that price. BPA could have, should have, released water from Coulee and sold into this BOM madness, but didn’t. Instead, they ran the system like it was a mild summer day like they’ve run it all through July. 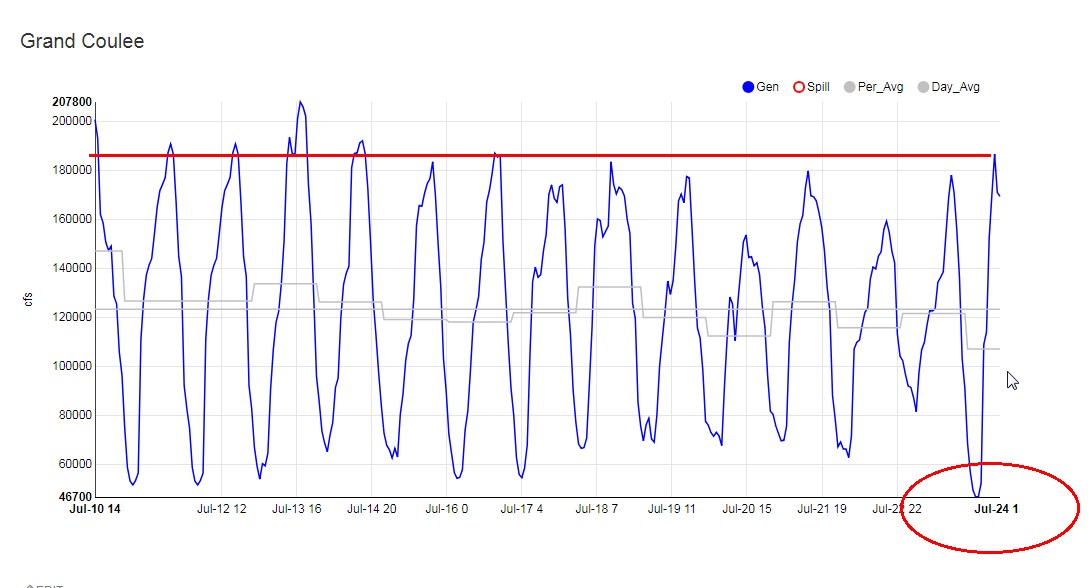 In fact, BPA set a two week low for discharge and their peak yesterday wasn’t even a two week high. The average discharge was 120 kcfs. What would have happened had they jacked average up to 180 kcfs? That would have put another 3000 aMW more energy into the system, most of which would have flowed into the ISO. The spread (SP-MidC) would have exploded, and BPA’s wholesale energy margin targets may have been impugned – or would they have?

If I were running their system, I would have forward sold 2000 MWs of BOM, Aug, and Sep then jacked discharge at Coulee. The MidC would have cleared at 15k heat rates, or about $40. The big beneficiary would have been Northwest Ratepayers. Instead, they will eat these $100 prices next year.

But you say “BPA can’t draft, they have targets, pond elevation is inviolate,” or so you say. 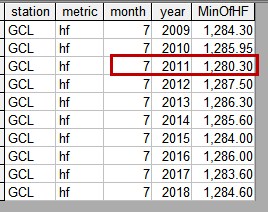 In 2011 the pond hit a July low of 1280, just last year it was a foot lower than today. Clearly, BPA can pull deeper than its current 1285, but elected not to; instead, the big ute just stared, deer in the headlights, at triple digits while the owners of those assets got snookered.

One takeaway from this week is how severe the resource imbalances are inside California. Be it natural gas, electricity, or water; the entire state is teetering (almost always) on some potential catastrophe. This latest, EC18 (Energy Crisis of 2018), was caused by Socal Gas problems. Problems at Aliso Canyon (almost entirely the fault of Socal Gas) and problems in the North Zone (Topock/Needles) which, again, is entirely the fault of Socal Gas. Total demand (sendout) didn’t even approach last summer, but the crisis as measured in price was astronomically more severe.

Three summer events, last year, had higher demand than this latest heat wave yet you couldn’t guess that from the price. Losing a BCF of import capacity will do that, plus another 0.5 BCF of withdrawal capacity from Aliso.

Up north, where it wasn’t that hot, had even bigger load: 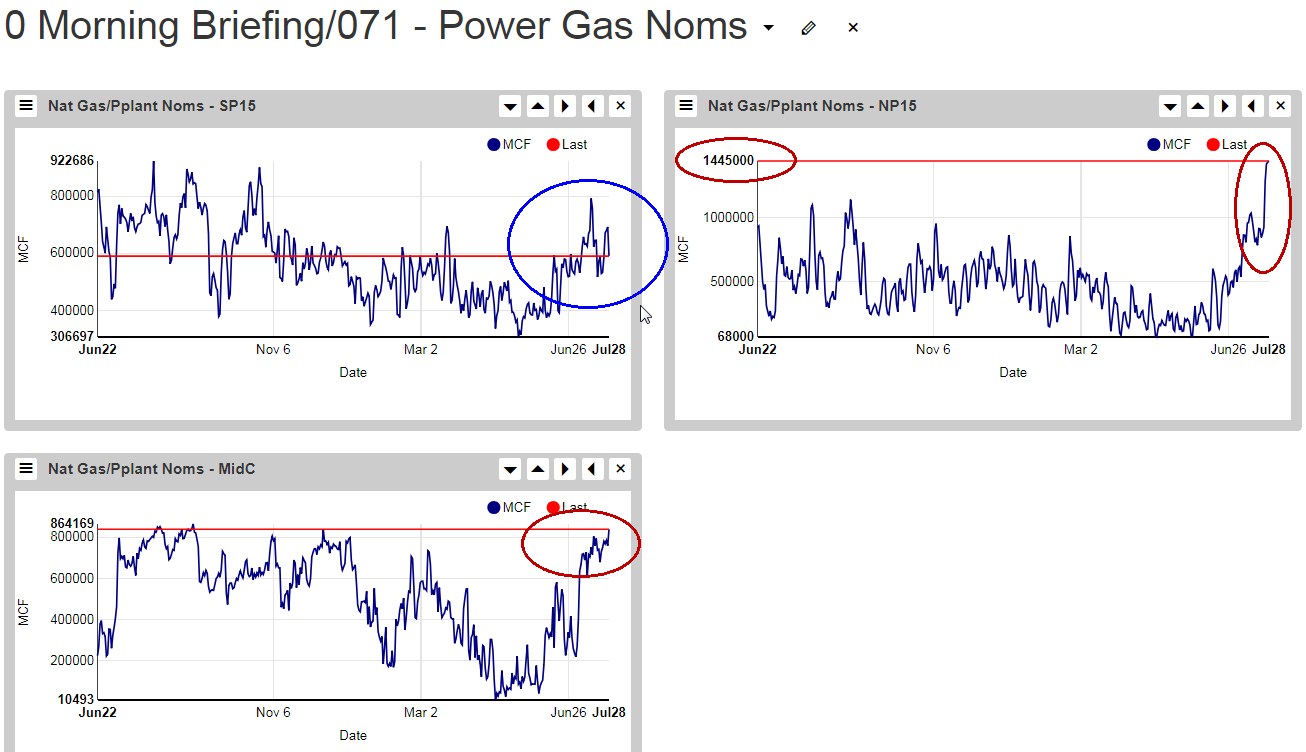 PG&E blew out its one-year highs for power gas nominations; the MidC wasn’t too far behind. We get PG&E, they are ISO-controlled and tightly integrated to SP, but the MidC is a different story. That northern hub turned on every gas unit because BPA wouldn’t turn on the hydro. 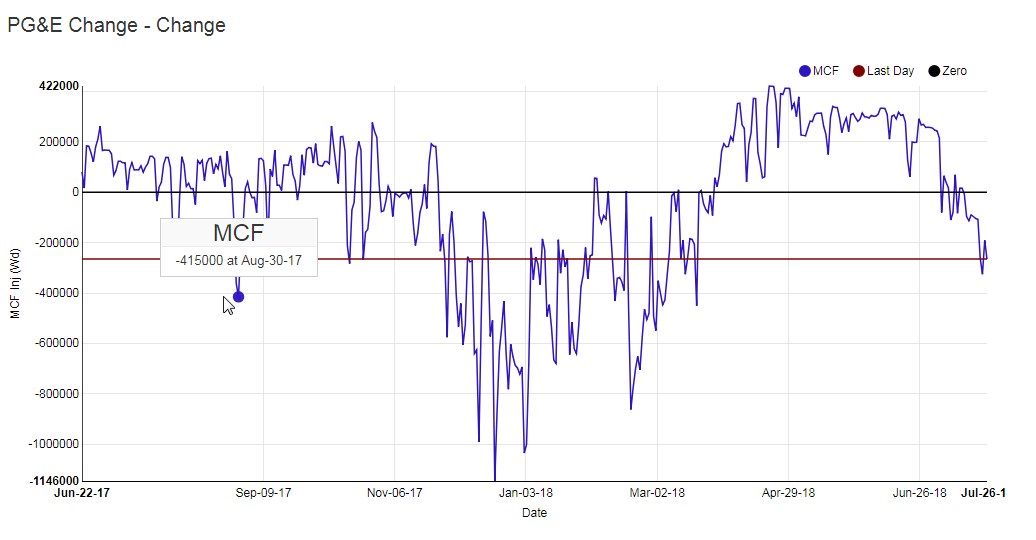 Both California LDCs pulled massive storage; each set a summer record. Yet the party is over; the heat wave is dissipating …

The Northwest reverts to mild/ average, so does Northern California, while Southern Cal and the interior stays above normal. We doubt Citygate gas settles back to those early July levels, at least not while there are threats of more heat. 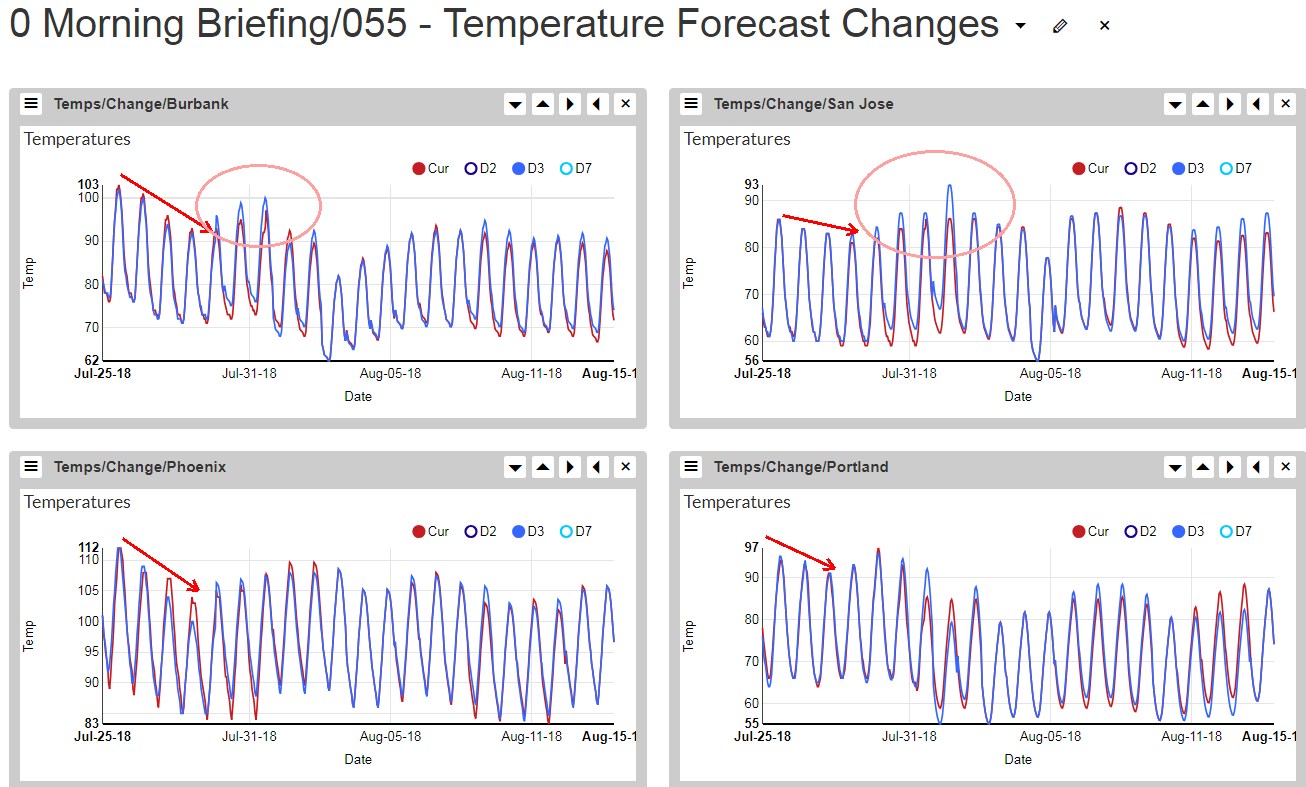 Not only are temperatures dropping over the next few days, but the forecasts themselves are also cooler for the same days. But in a week or so there is more Socal heat on its way. 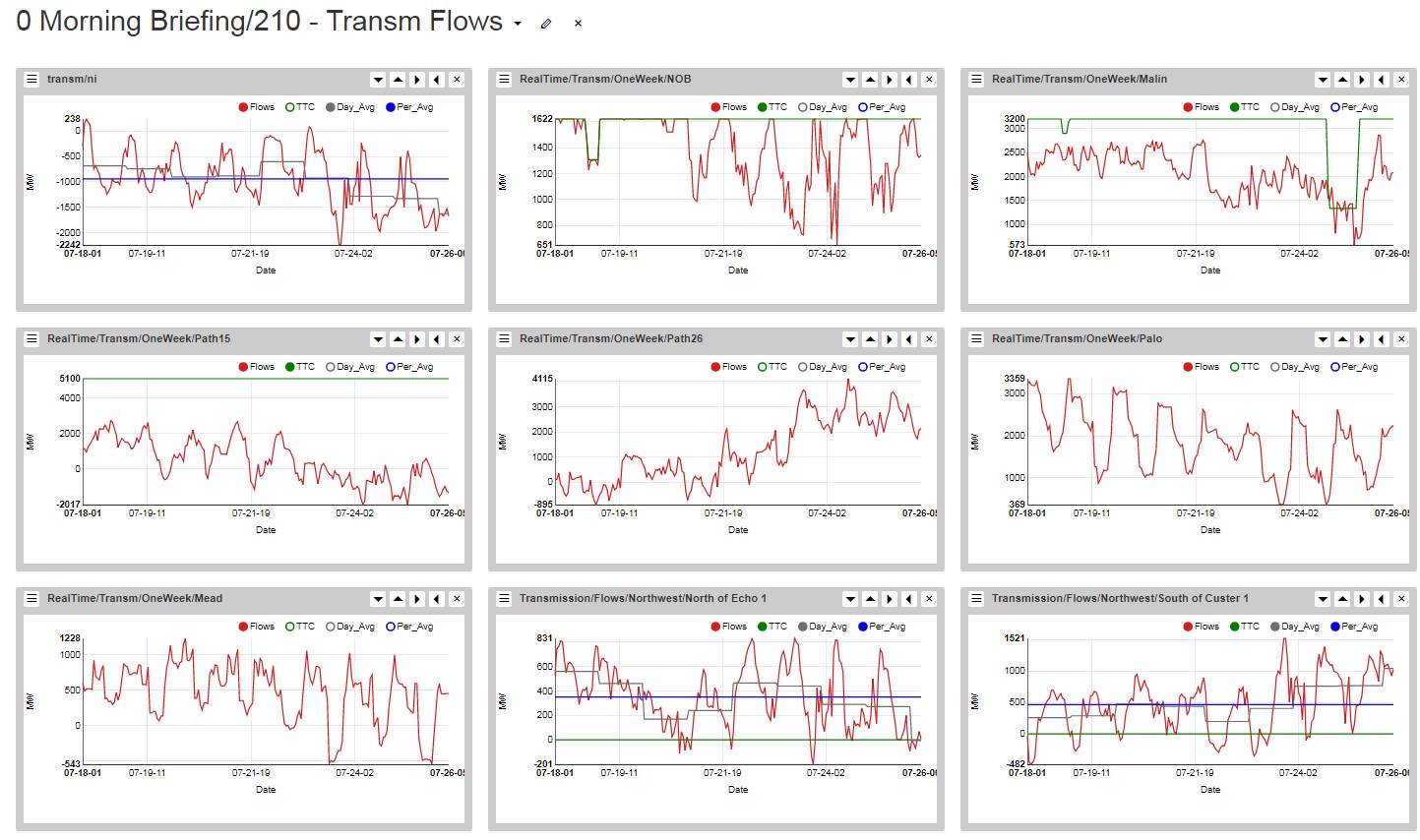 Canada did its part, our friends to the North were constant sellers making up for BPA’s lethargy. Strange that the AC wasn’t full, you’d think with triple digits at Capt Jack the line would be full, but without the hydro-owning utilities drafting/generating/selling there just wasn’t any energy to fill the line. There should have and could have been, but there wasn’t.

Both Palo and Mead backed exports down; they had real problems of their own.

Forget TTC, there is a new transmission line in the WECC, and it is called “contagion.” This reality makes one want to throw the fundamental models out the window but we won’t. 98% of the year the fundamental models work, it is just in the 2% they fail.  Just get very long in that 2% and stay long. In this new world, long ain’t wrong. That said, we’d still be short Aug and Sep MidC and NP.