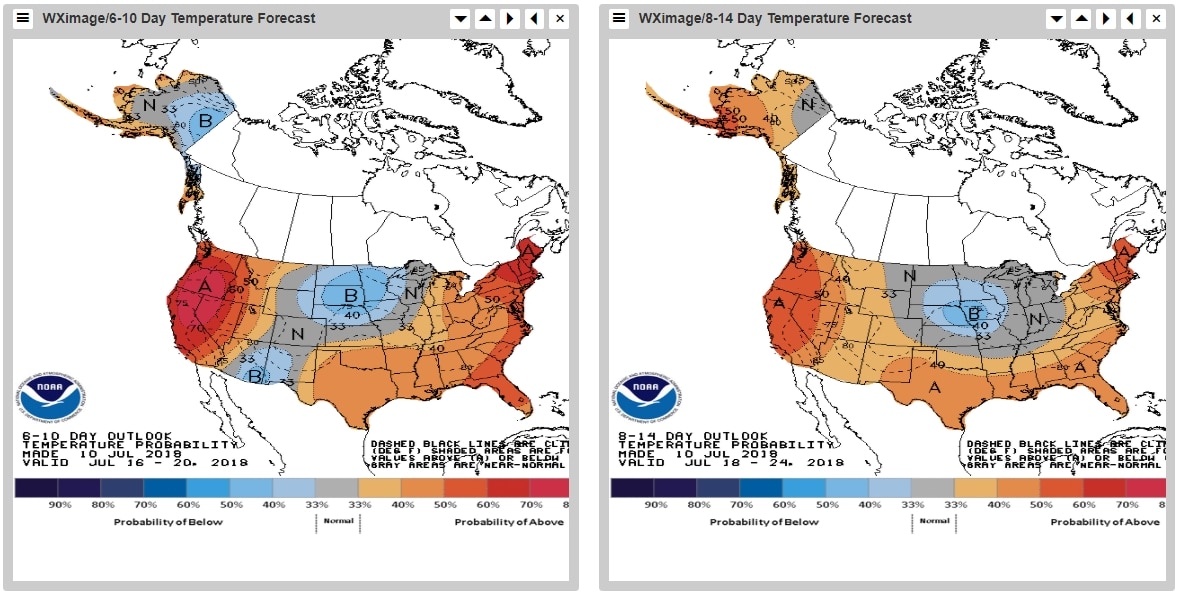 Southern PV shows temps slightly below normal this week but will move to the other side of the spectrum by day 10.  The rest of the West should be consistently hot, especially NP moving north. 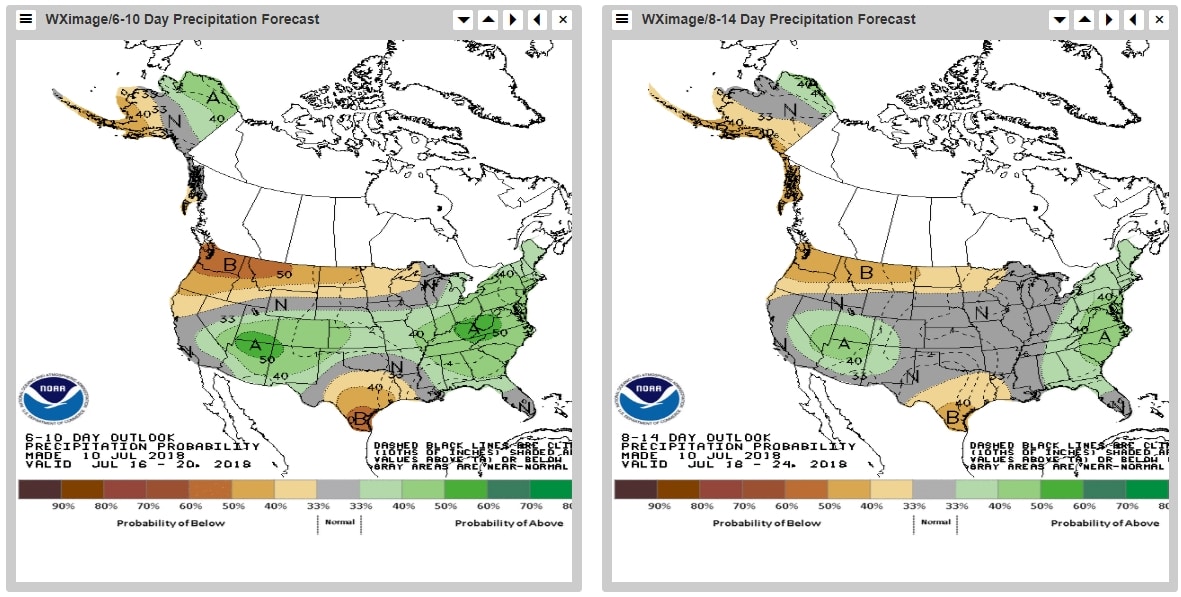 The Upper-Northwest is particularly dry, while the southwest, including SP, may get a reprieve from its typical dry summer.

Crude was up $0.20 yesterday, but most of that came late in the afternoon as the better part of the day showed flat prices.  Alternatively, gas was on a steady decline, finishing with a five-cent drop in all.

Southern California gas storage dropped as low as 251,705 MCF on the 6th as heat battered the region.  Since then, storage has remained positive, albeit at levels lower than what we saw last week. 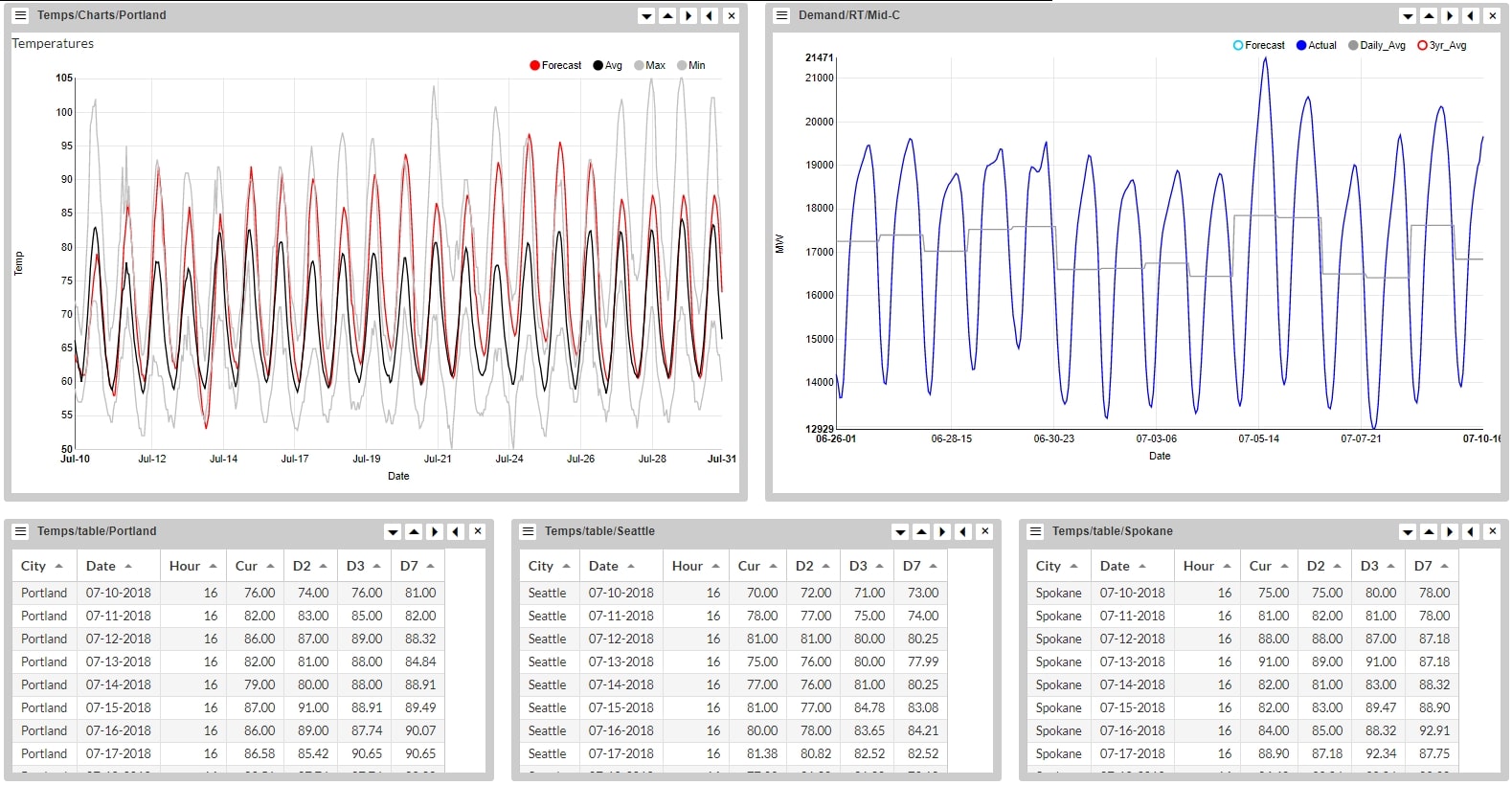 Temps are heating up quickly in Portland where today’s high comes in eight degrees warmer than yesterday and is equal to nine degrees above normal.  Thursday will be even warmer at 92 and is currently projected at just a degree below the ten-year record.

Looks for Seattle to make a consistent foray into the 80s beginning next week and extending into the end of the month as just one day shows up with a high below 80 degrees. 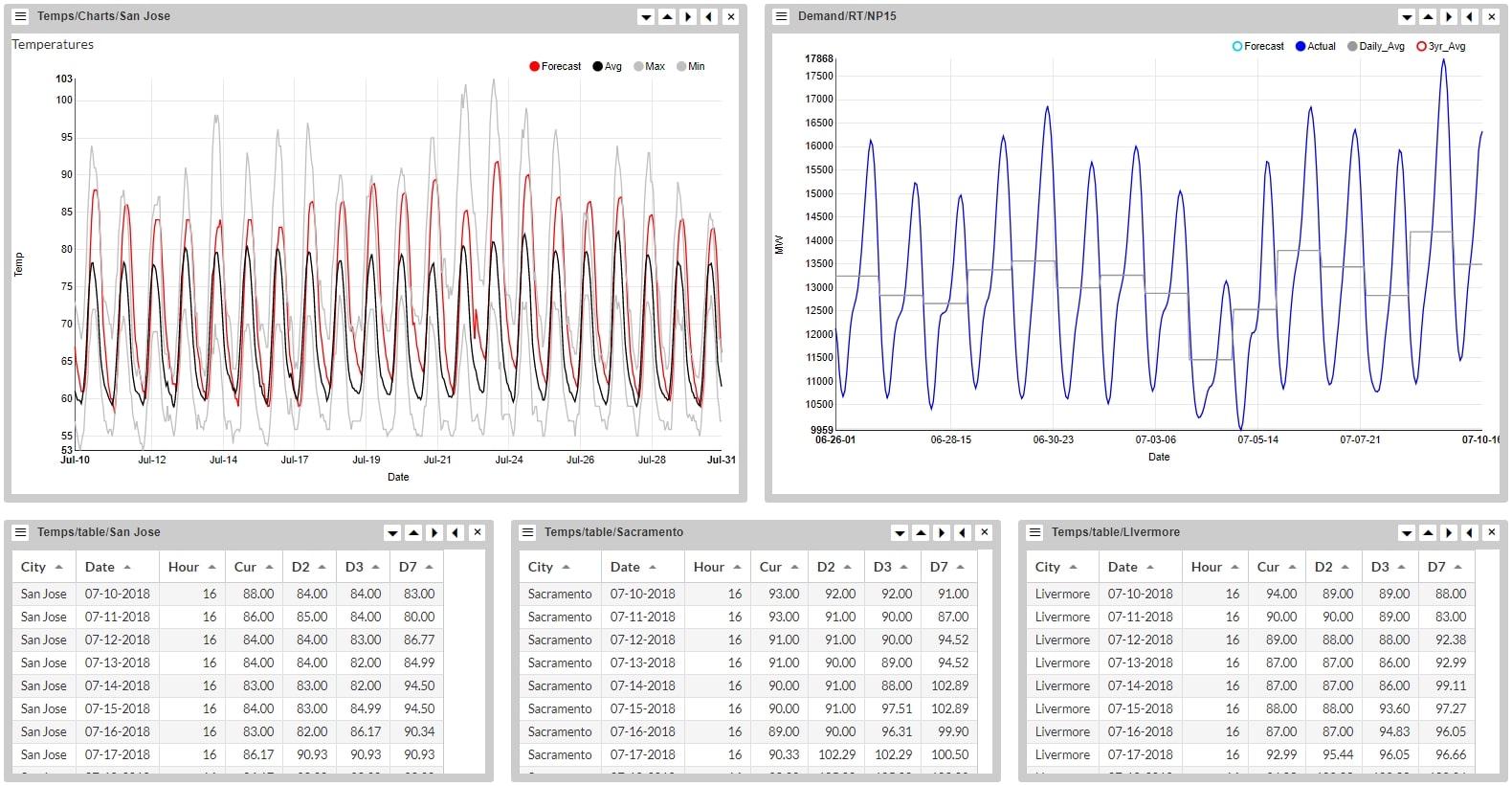 Monday’s average daily demand was the highest in the past two weeks as peak loads reached 17,868, an 1,800 MW increase week-on-week.

The next week shows a three degree drop in high temps for San Jose but a consistent above-normal forecast persists.  Sacramento shows potential for a return to triple digits by the 19th where the forecast predicts a high of 107. 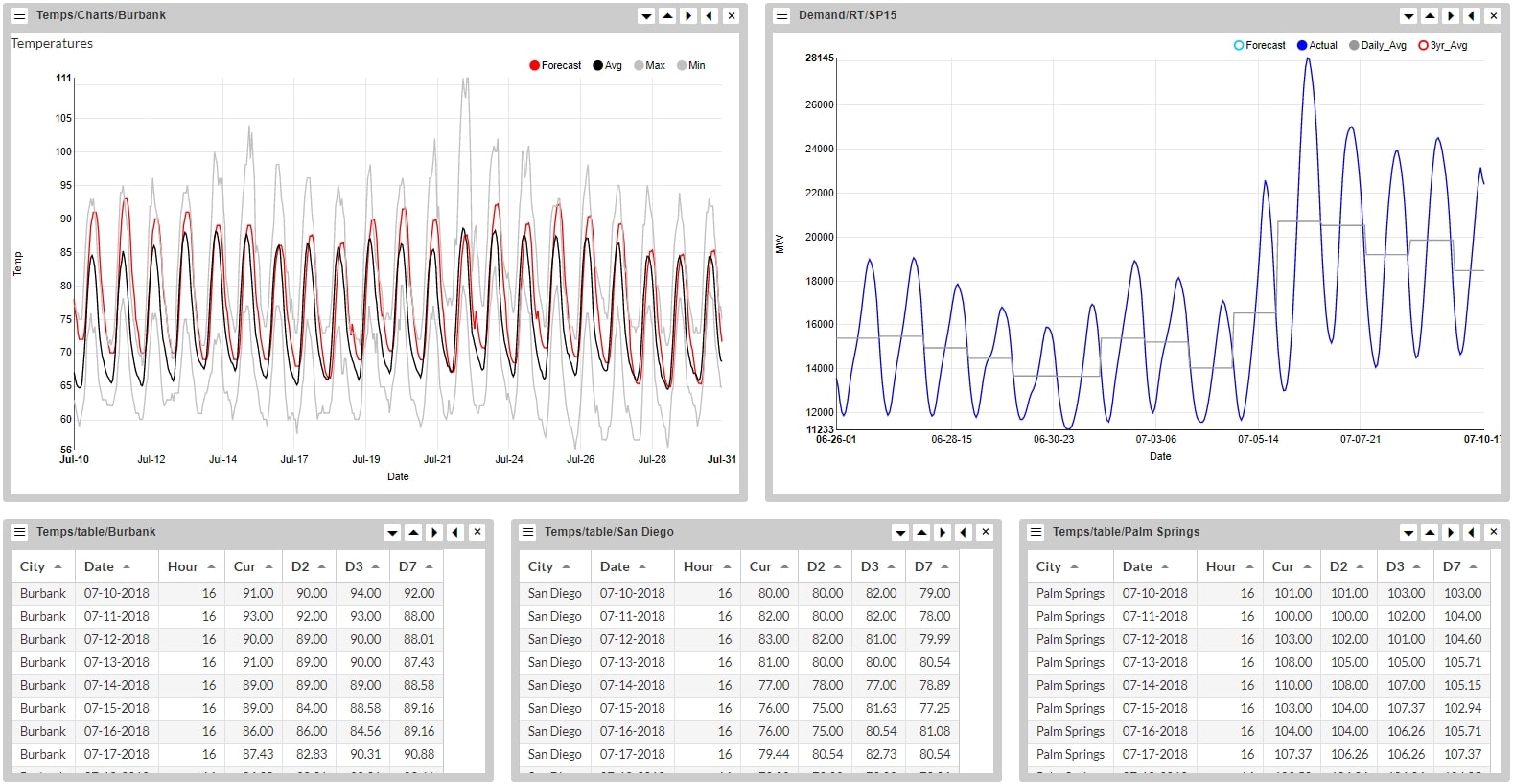 Burbank’s projected high of 93 puts the peak at 8 degrees above normal, and that is shown as the largest projected anomaly though the remainder of the 21-day forecast.  90’s should remain until the weekend, then settle into the 80 for most of next week. 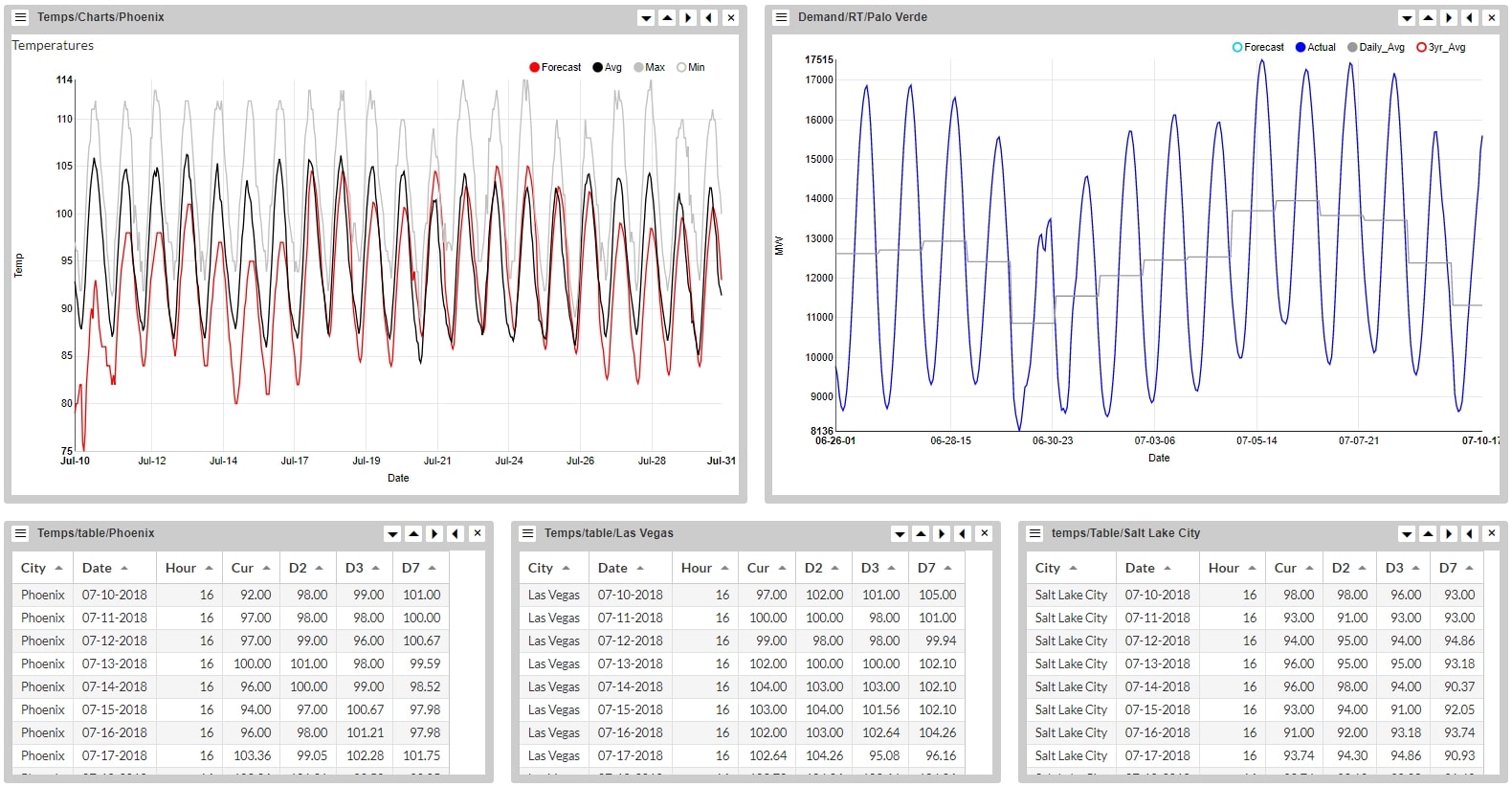 Below normal temps are projected though the next seven days for Phoenix and are highlighted by the 14th’s high of 97, eight degrees below normal.  The cool-down is carried into the night as well where temps fall as low as 80 on the 15th.  PV AC units might be getting a breather at some point next week.

Looking north, Vegas won’t be participating in the cooler weather that we see in Phoenix.  Temps are consistently forecasted in the triple digits through the 18th.

Demand plummeted on Monday as temps did the same.  Average daily demand fell to 12,384 MW, up 300 MW week-on-week, but down 1,100 MW from Sunday.  Yesterday’s light-load hours were down close to 900 MW compared to Monday as the nights cool off and become slightly more bearable. 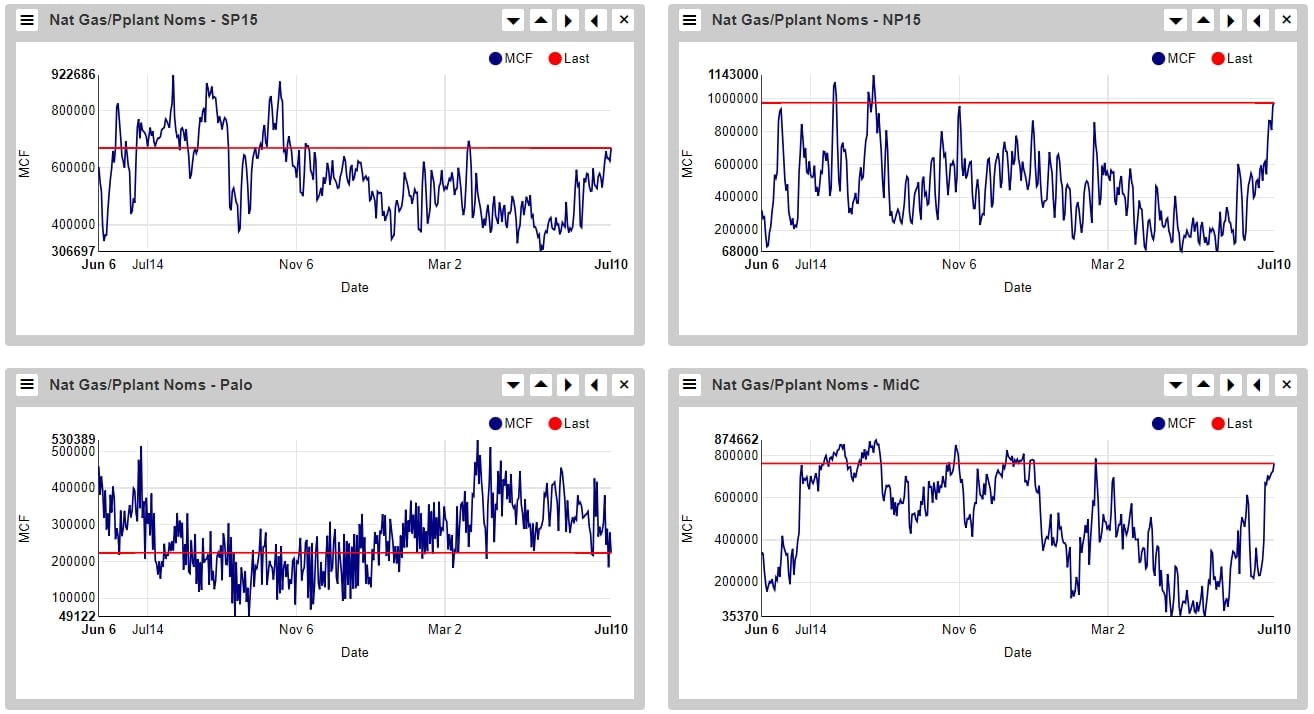 NP-15 gas noms rocketed to 975,000 MCF yesterday, a 160,000 MCF increase day-on-day, and a continuation of the jump that began on the 4th.  These levels haven’t been seen since last September. 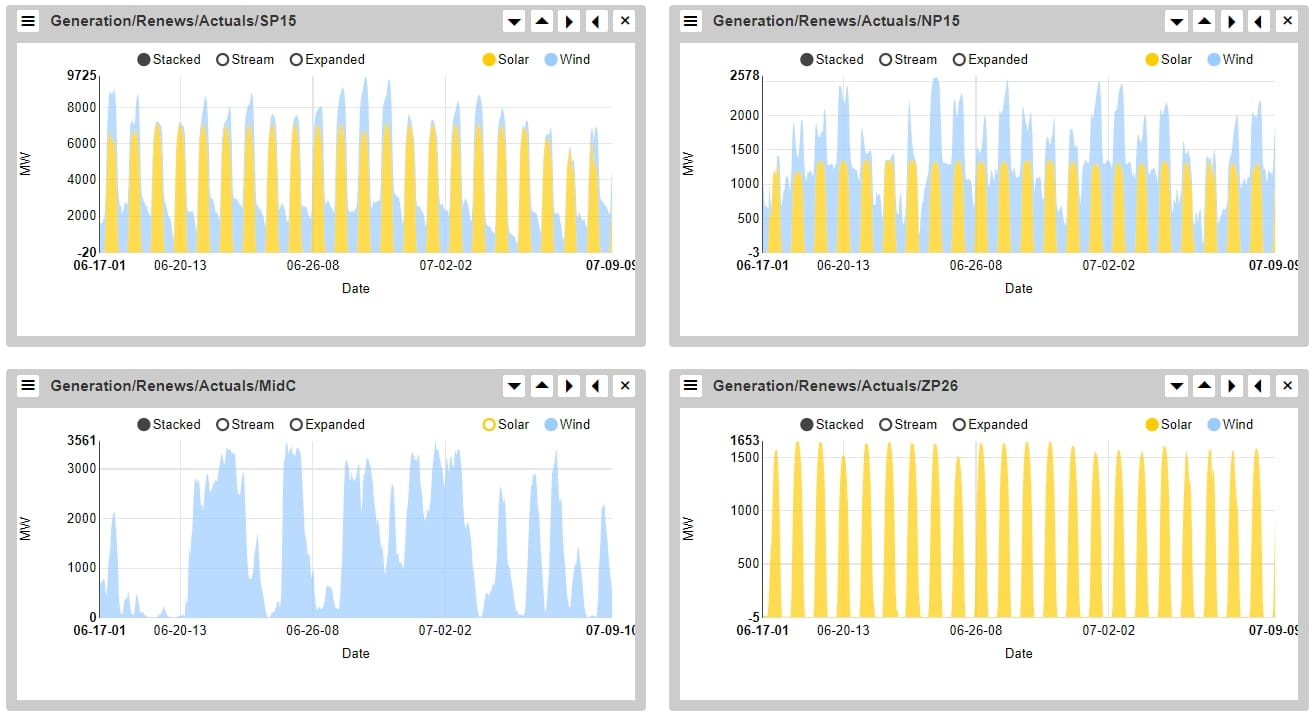 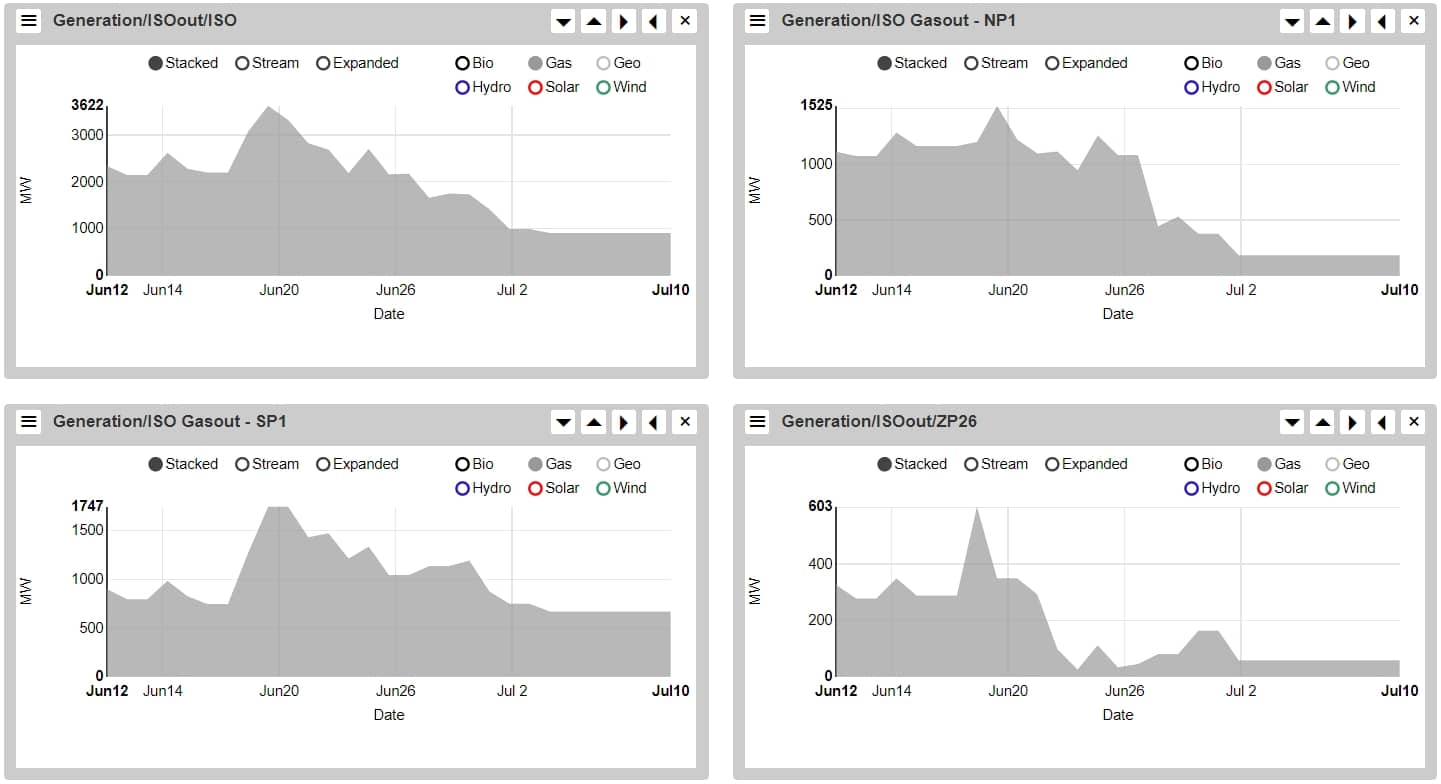 ISO gas outages are holding steady at 912 MW; the same outage numbers since the 4th. 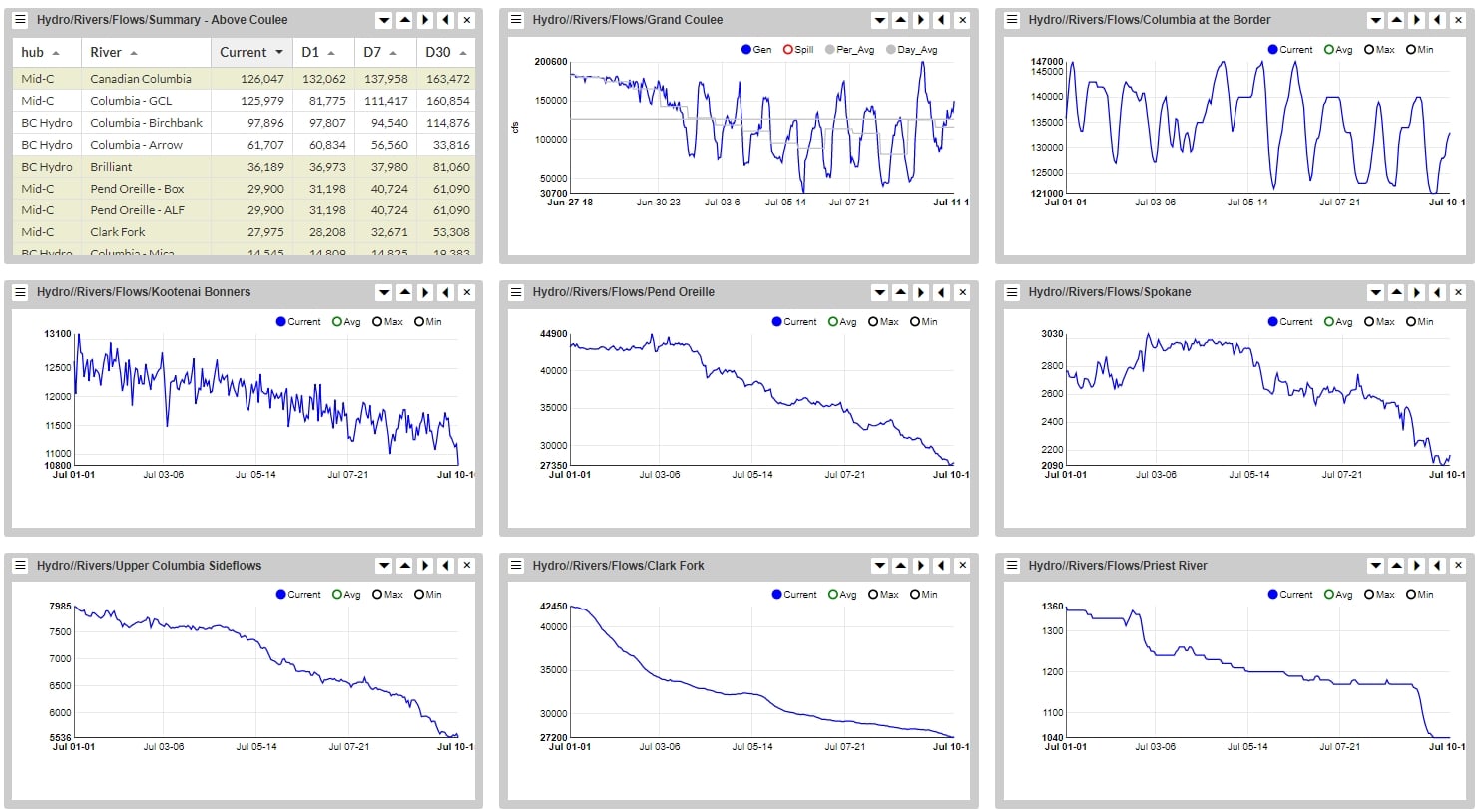 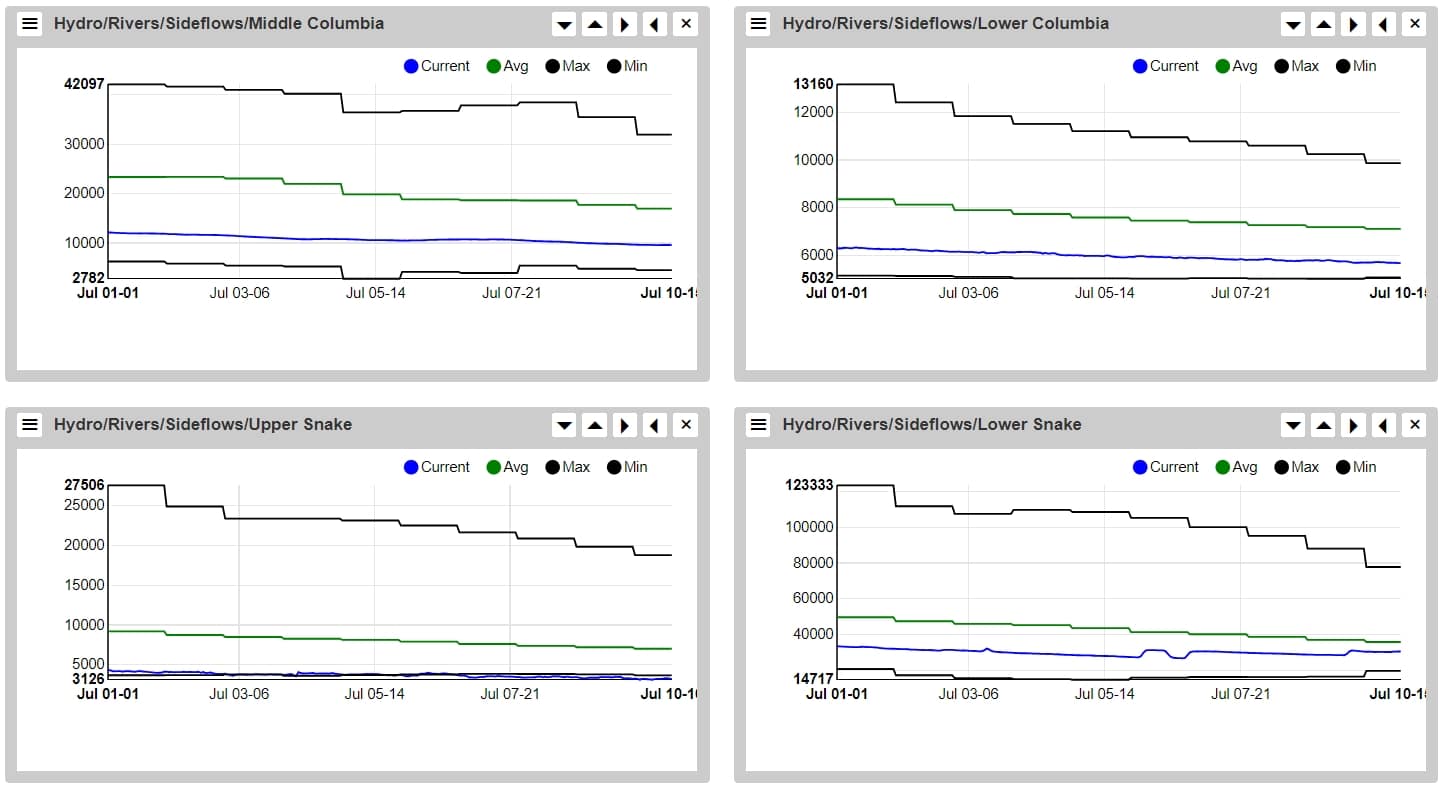 The Lower Snake remains as the only side flow that is remotely close to the average.

Grand Coulee topped out at 1,289.9 yesterday before coming off close to half a foot by the end of the day.  Hungry Horse and Libby continue to fill, on the other hand. 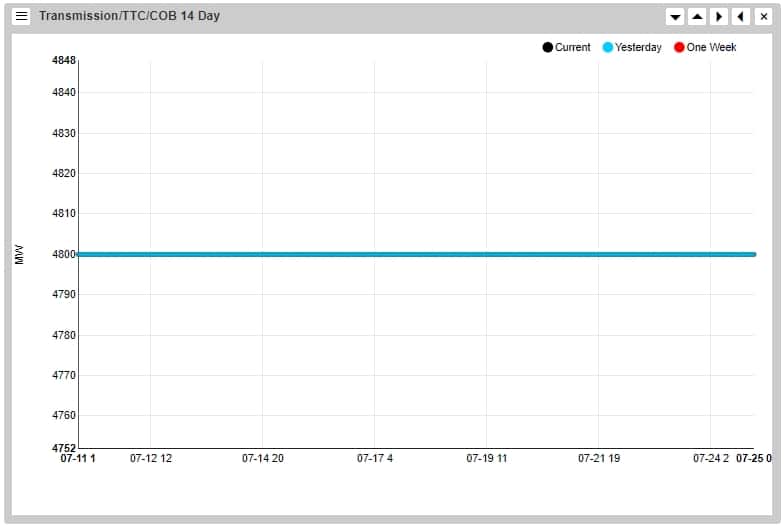 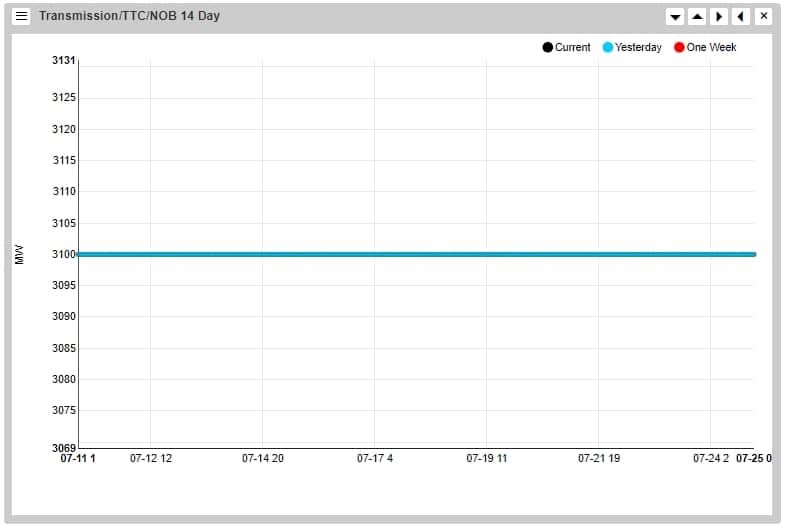 No changes to either line, once again.