Well, we set several all-time high temperatures in the LA Basin on Friday. That would suggest to me that power markets were stressed and be a case study to illuminate the numerous nat gas problems that region suffers . Let’s start with the LMPs.

OK, those are some crazy high clears on the Friday DA. SP hit a Friday peak of $188 on HE20, but that traded on Thursday for Friday.  SP’s HL heat rate was a yawner – it didn’t even clear 10k – on the hottest day in LA’s history. The HA prices, Friday for Friday, were less impressive, the peak hour was HE14 and cleared $114. HE20 HA was a more modest $65. All of which suggests that maybe those record temperatures were NOT that stressful to the system?

Of course, we are equally concerned about what happened to the gas system on that “design day”. Spot prices soared, clearing $5.41/mmbtu, the highest spot price since Winter. 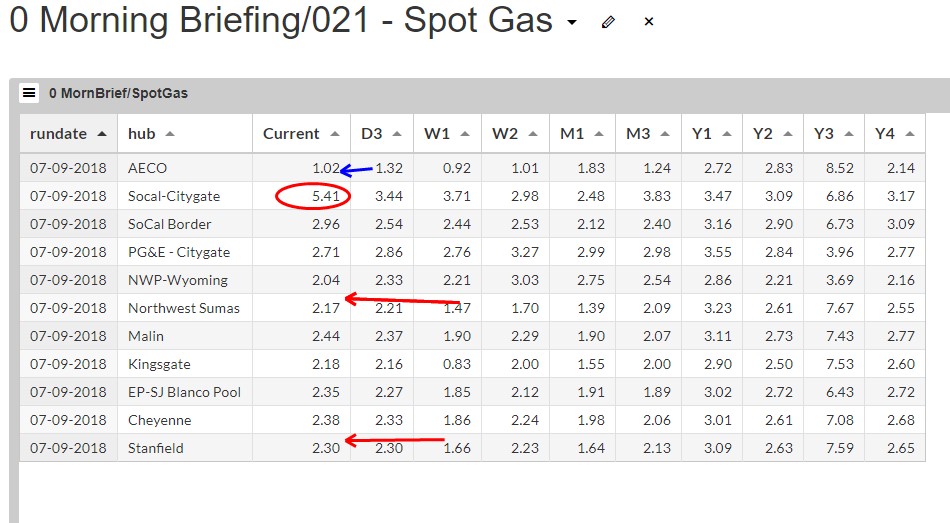 The rest of the WECC spot gas market tightened, too; Stanfield rallied $0.64, up about 30% in a week. Even everyone’s red-headed stepchild, Sumas, surged $0.70 which was strange because AECO collapsed 25% from a few days earlier.

How did the term gas react? 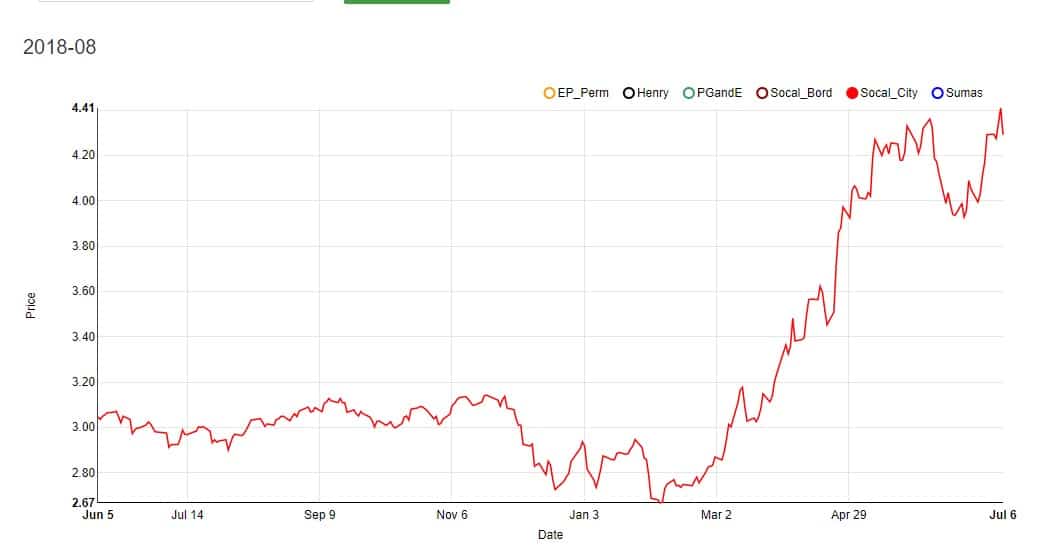 Dang, Socal Citygate is back to those same dumb levels from  a month ago, all over the last ten days.

OK, this is an SP autopsy, not MidC. Those $5.40s prove how precarious Socal Gas’s system is, right? Well, not so fast, cowboy, there is more to discuss.

Socal’s system demand rallied 500 MCF, that’s huge, but not even close to extreme levels seen last summer. Both the June and July heat events in 2017 had higher system demand. How can that be, LA set heat records? One explanation can be summarized in a word – “friends.” With a little help from SP’s friends there wasn’t a gas problem. 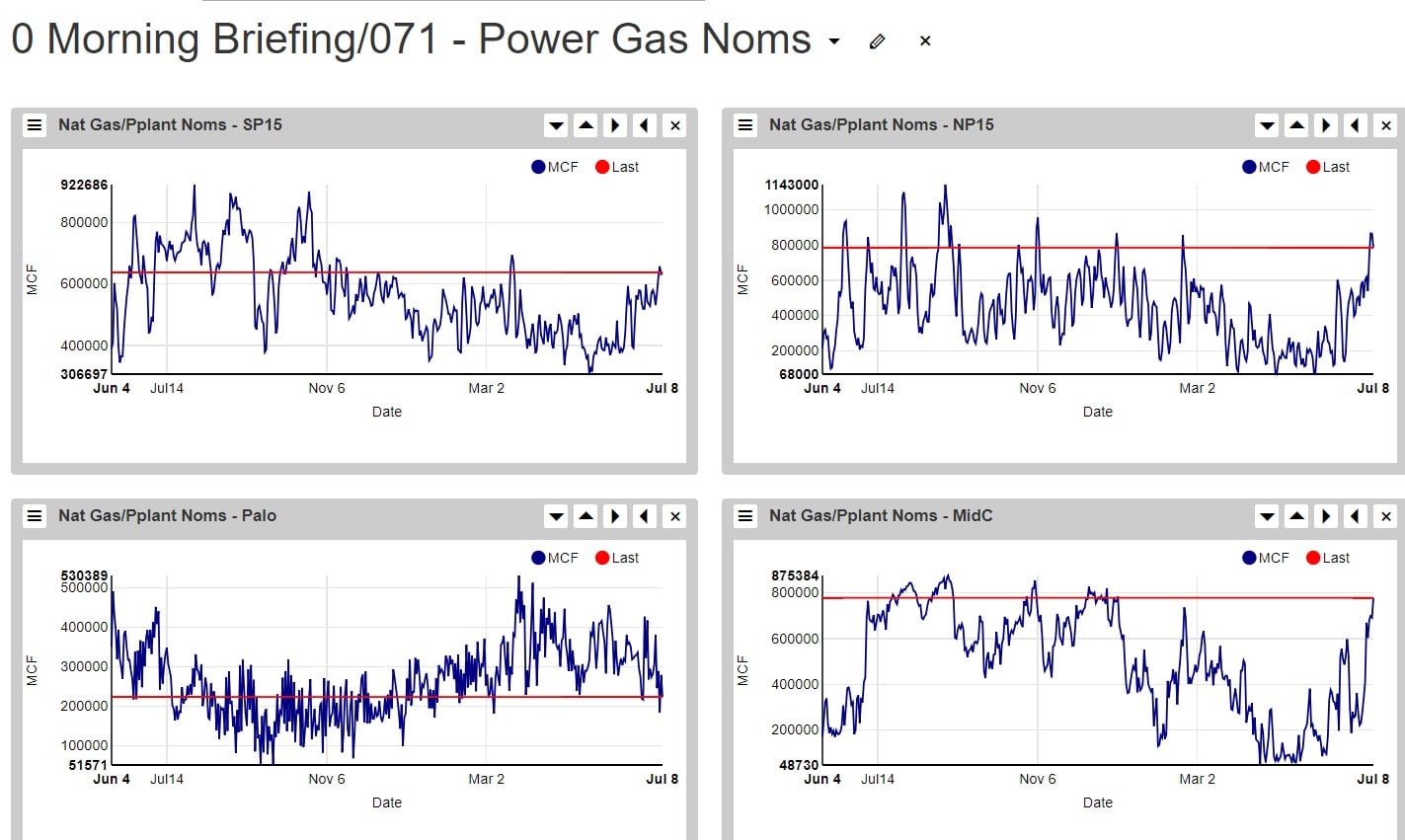 Note gas noms doubled at NP but barely moved at SP. In other words, the marginal load was served via the transmission grid and not from SP’s gas plants. That is why system demand barely hit 2.5 bcf. The rest of the WECC just wasn’t that hot.

Palo to SP spreads were non-existent, but the SP-NP spreads blew out (so did the SP-NOB), and the NP-Capt Jack was next to zero. All of the congestion was in ZP26. The rest of the WECC wasn’t hot, and SP served its marginal load via transmission lines.

Loads were responsive; peak demand rallied 12 kmw. There, that is the good news, now look at forward-looking temperatures – they are collapsing ten degrees. The party is over, at least in SP15.

The big story in today’s outlook is at the Mid-C where Portland is poised to rally fifteen degrees and stay hot for a week. With tightening water and these warm days, the MidC may be poised for a rally.

NP, like SP, is just getting cooler. Friday’s loads didn’t budge, and you wonder why SP’s HA didn’t scream?

We saw those blues in NOAA’s 6-10 day, and now we see the mid-90s in actual Phoenix temperatures. Loads were healthy, now they will be weak for a week. 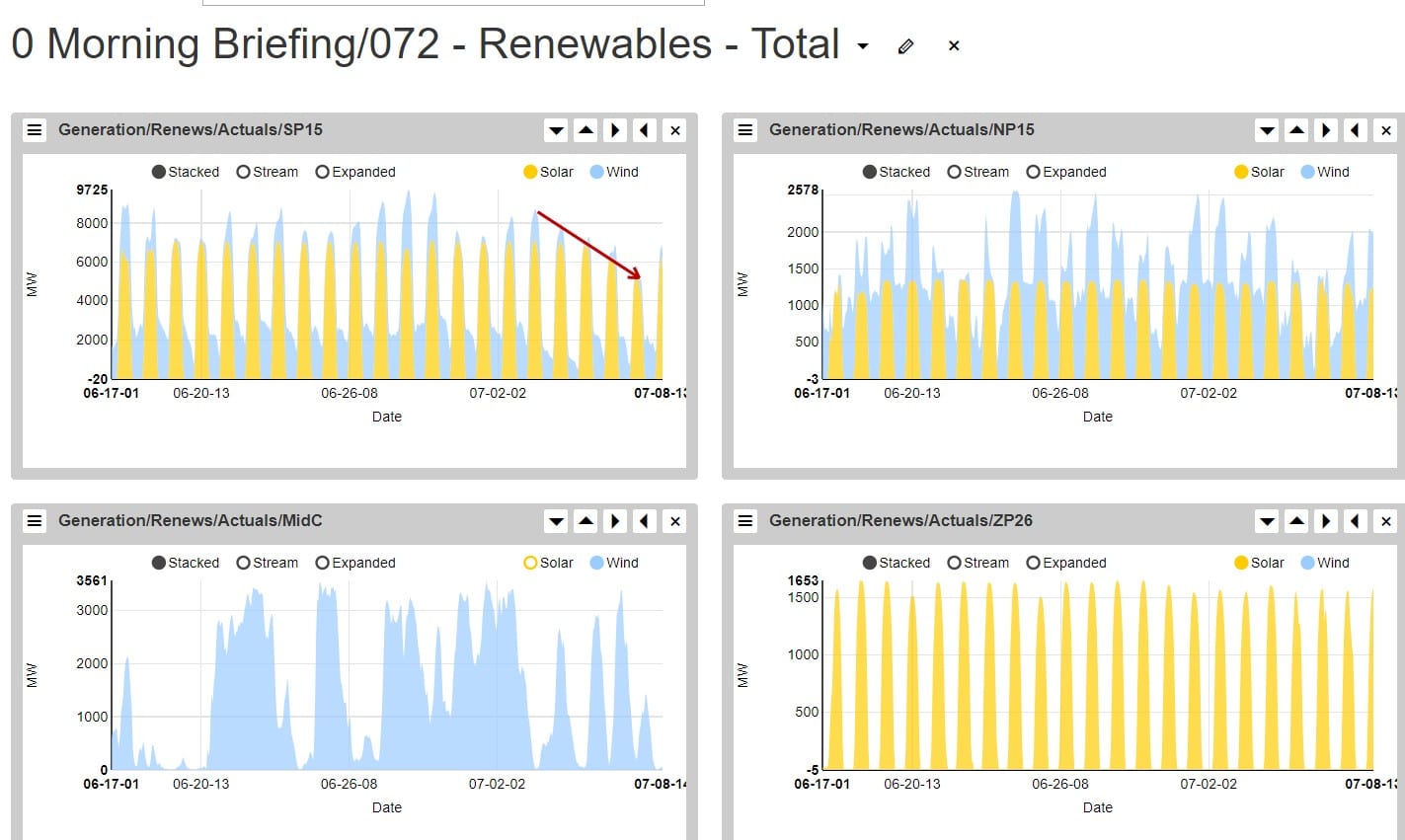 Note the collapse in all renewables at SP on Friday. Just when you need them, they aren’t there. 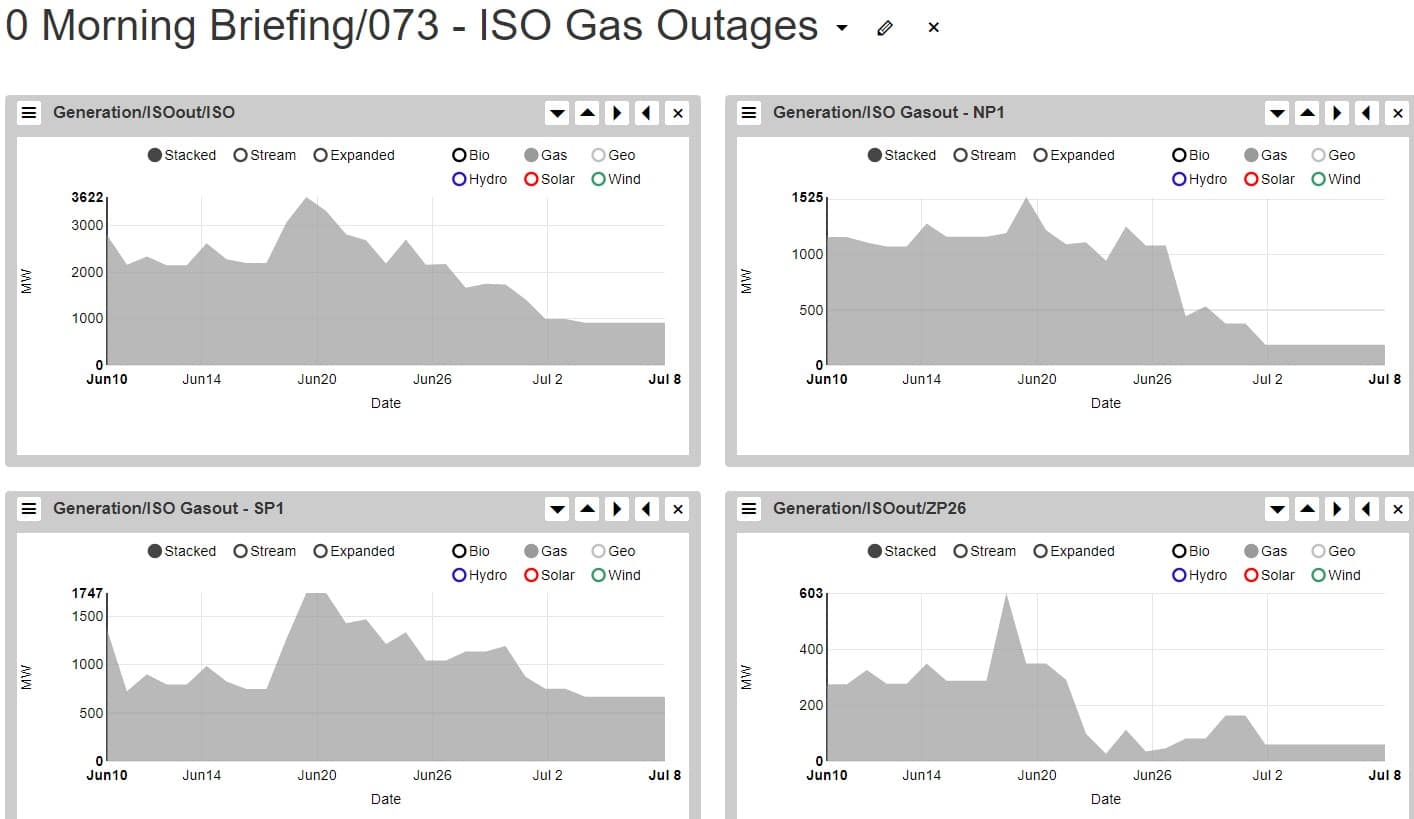 All the gas plants were available, but most weren’t called upon on the hottest day in LA’s history (at least for a few cities). 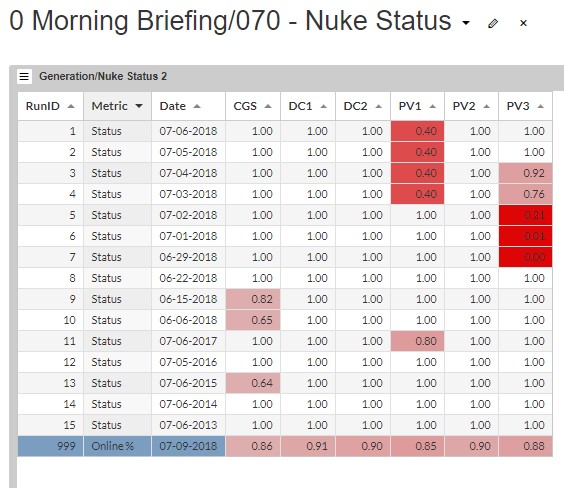 Palo nukes continue to have problems, now it’s PV#1 that is running at 40%.

Coulee’s inflows continue to collapse, and the reservoir is officially full. Total MidC storage is below average, though.

That’s a mostly irrelevant fact, the difference between current and normal is small. What isn’t irrelevant is the ever-declining inflows on the major Northwest rivers.

The Kootenai and Pend Oreille are in a free-fall, WY18 is over, and the snow is mostly gone.

Discharge from Arrow is up 50% while flows at Brilliant are collapsing (See the Kootenai’s flows at Bonner).

No rivers were drafted on Friday which speaks to how little the ISO was worried about serving its demand on the hottest day in LA’s history. 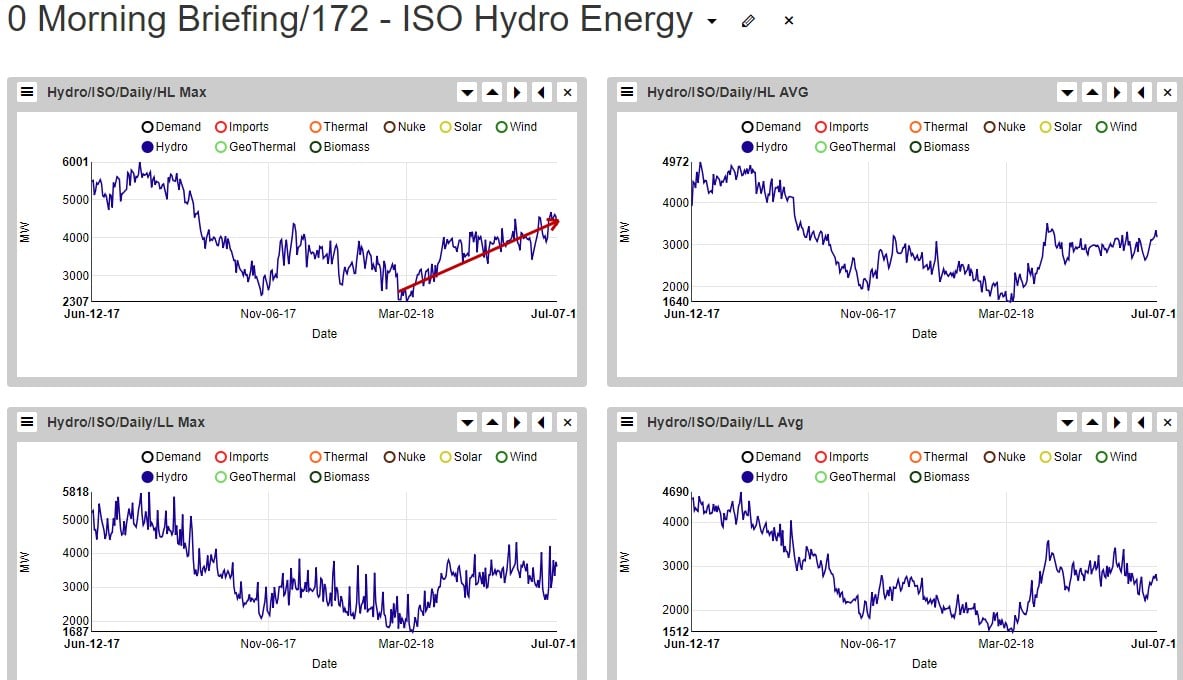 Peak energy is up, but there is no gap up on Friday. Total production barely changed.

The RFC’s 10-day is rallying though in the front the delta between STP and 10-day was negative. Generally, Friday’s forecast is entirely in line with last Monday’s STP and we don’t expect any surprises in today’s STP. 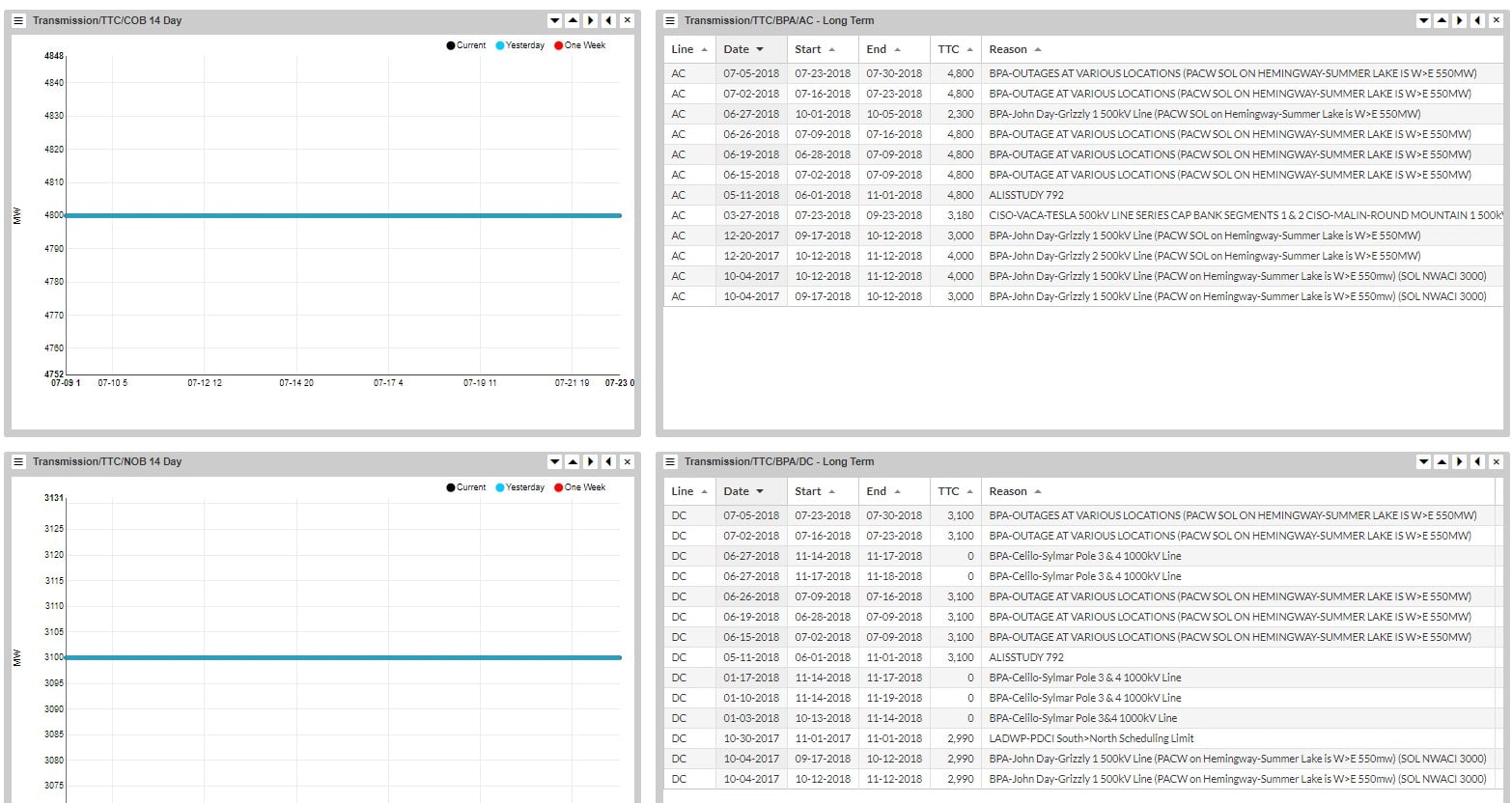 No changes in BPA’s TTC.

The Northern Intertie is aggressively selling into the Mid-C. Flows at NOB were maxed out on Friday, even when the HA LMP cleared negative. The AC couldn’t fill but Path 26 sent everything it had at SP15. Palo and Mead barely acknowledged those $160s; they had load issues of their own.

The heat event was a head fake because the other hubs weren’t stressed out. August Socal Gas rallied hard off of the spot gas rally, but we’d short it off of the mild ten-day outlook. Mid-C looks to be the tightest of the WECC hubs off of hot weather and declining streamflows.