Wet Dreams and lucky charms, if you’re long. The WECC heat finally arrived and, if you have a grubstake in some length, you’ll probably get paid. Patience got paid, too, because June was abysmally cold – let’s start with that reality. 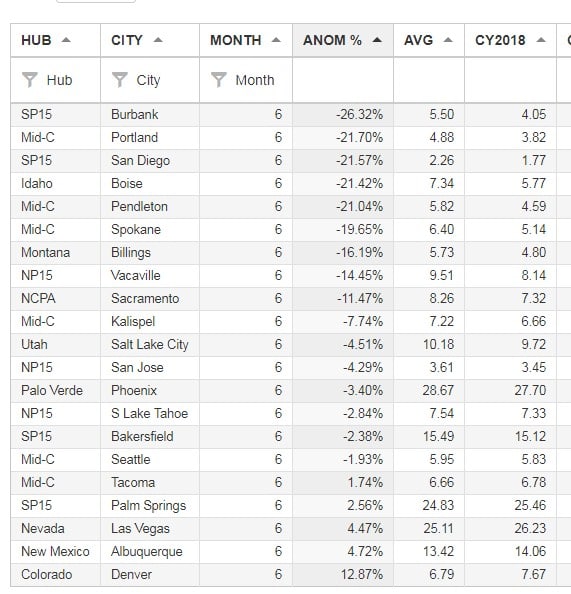 Unless you exclusively traded in PSC, you were wondering what happened to Summer, right? Well, you were only off by one month, summer’s coming… 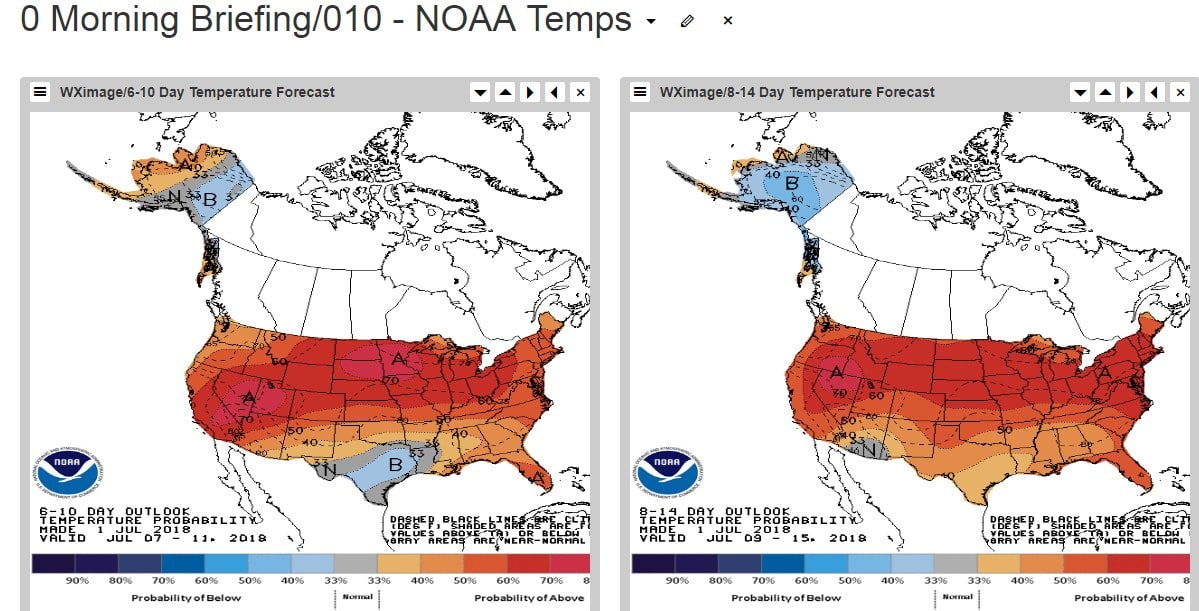 WECC heat, even coastal, and it is pretty much universal meaning all hubs will enjoy stress at the same time, at least per those pretty pictures. 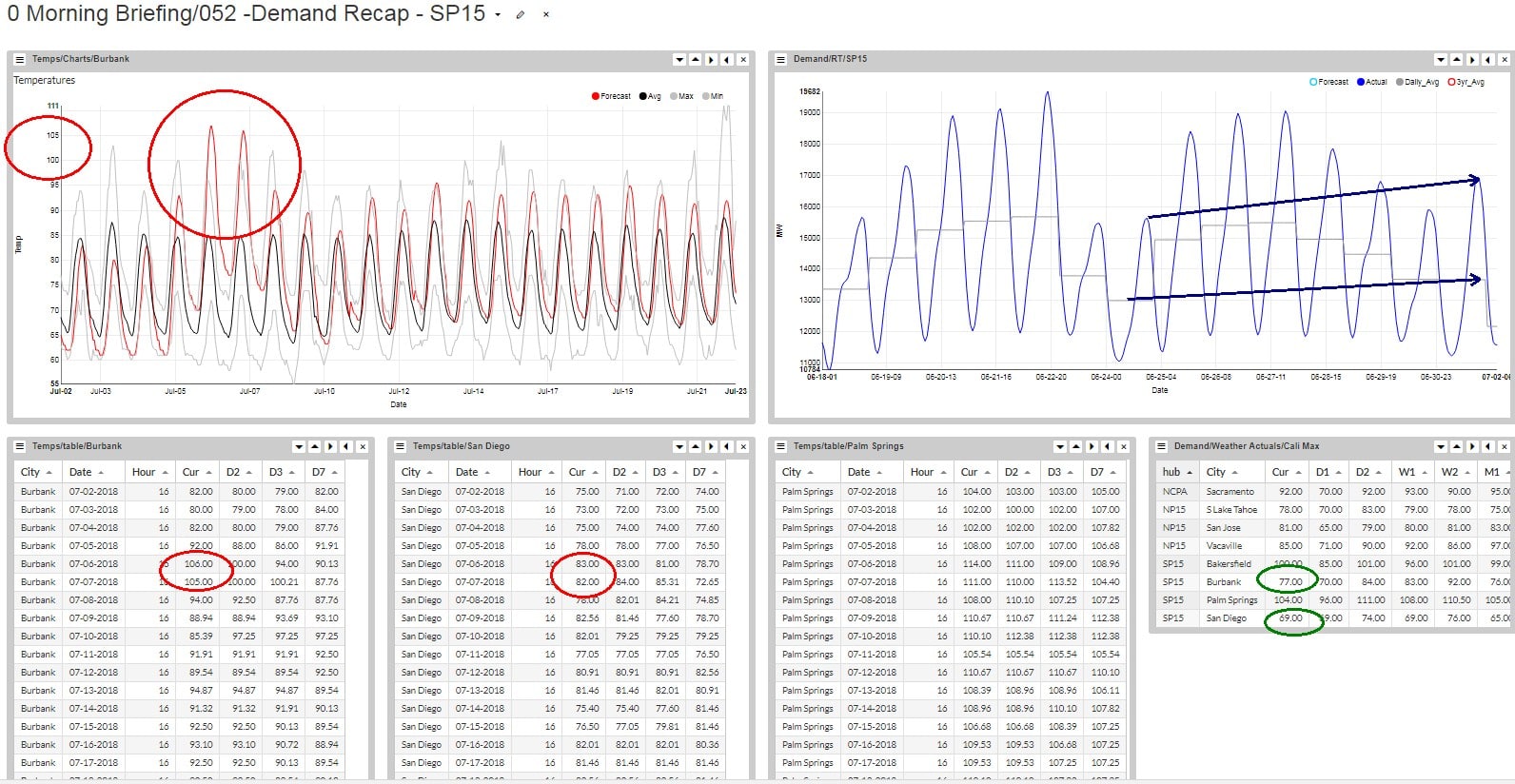 Just as Burbank led the Degree Day negative anomalies table, we’ll let it lead our temperature forecasts. Yes, those are the long-sought triple digits in Plastic City. Friday is projected to hit 107 degrees and Saturday 106, both which will shatter the ten-year highs. But alas, those are weekends and reality sets in the following Monday, but still, LA will enjoy the hottest days of 2018. 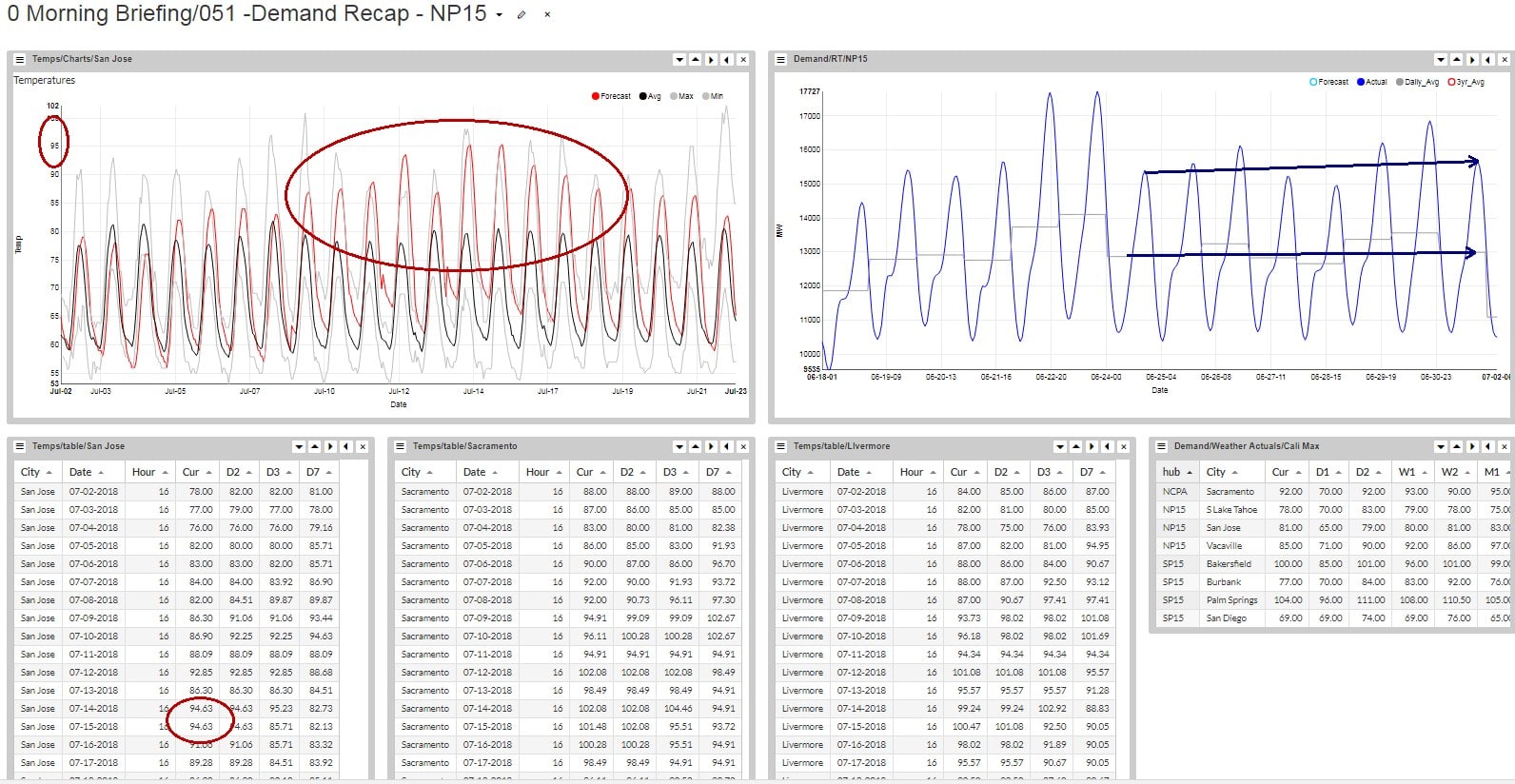 Sadly, NP15 won’t be hot on the same days, despite NOAA’s pretty picture, and those coolish NP days will act as a governor on how high the LMPs will trade over the weekend. NP’s heat, at least in this forecast, arrives about a week later. 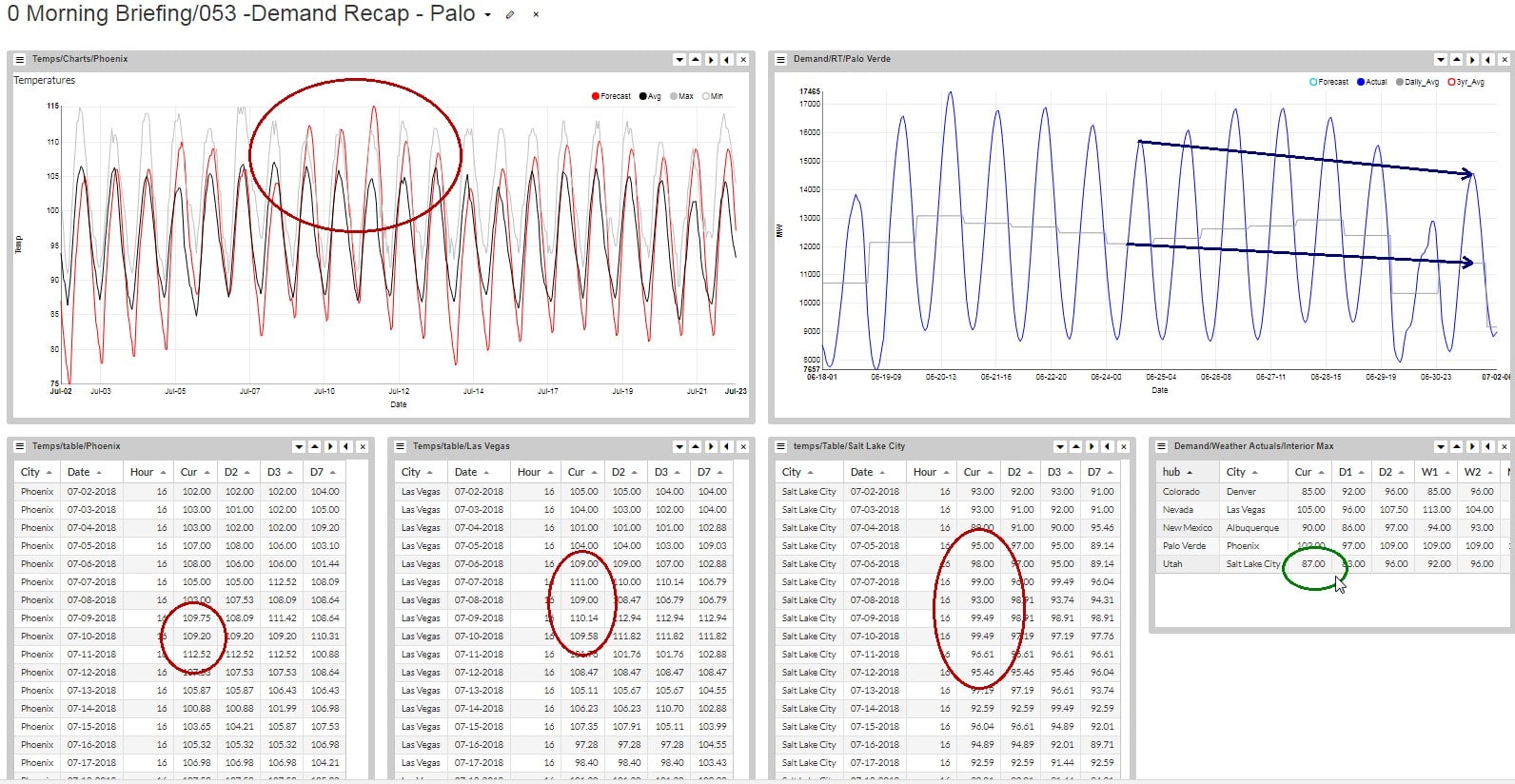 Same is true in Palo, the heat is a week behind SP and will approach 115 degrees in Phoenix – ouch, that is hot. 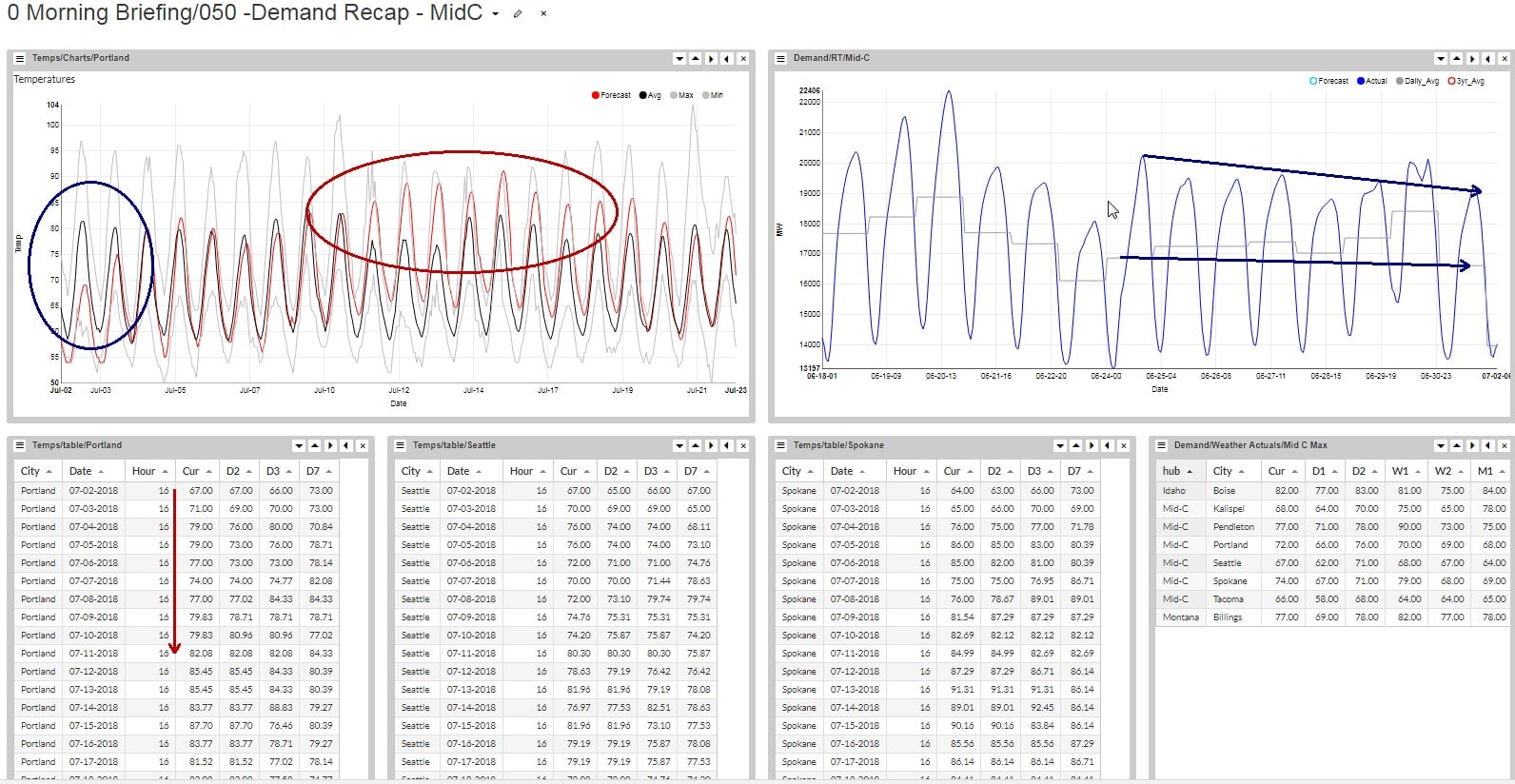 The Northwest is cold yet even that Siberian-like hub has a teaser out just beyond the range where we are confident it could actually happen.

The Northwest LMPs, Captain Jack and NOB, saw some crazy low prices in the HL and the LL was higher! 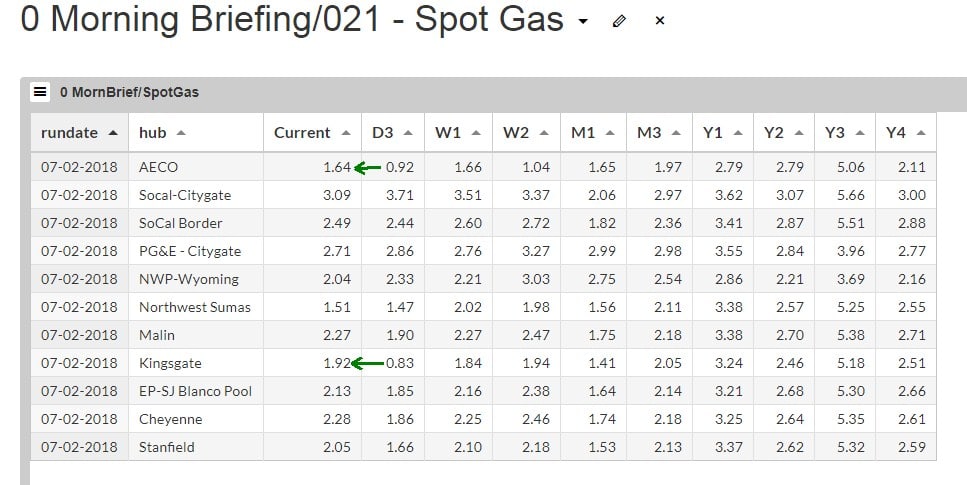 Canadian gas firmed up over the weekend, both AECO and Kingsgate nearly doubled. The SCG to PG&E spreads collapsed like they do every weekend, but we expect those to blow out off of Burbank’s design day on Friday. 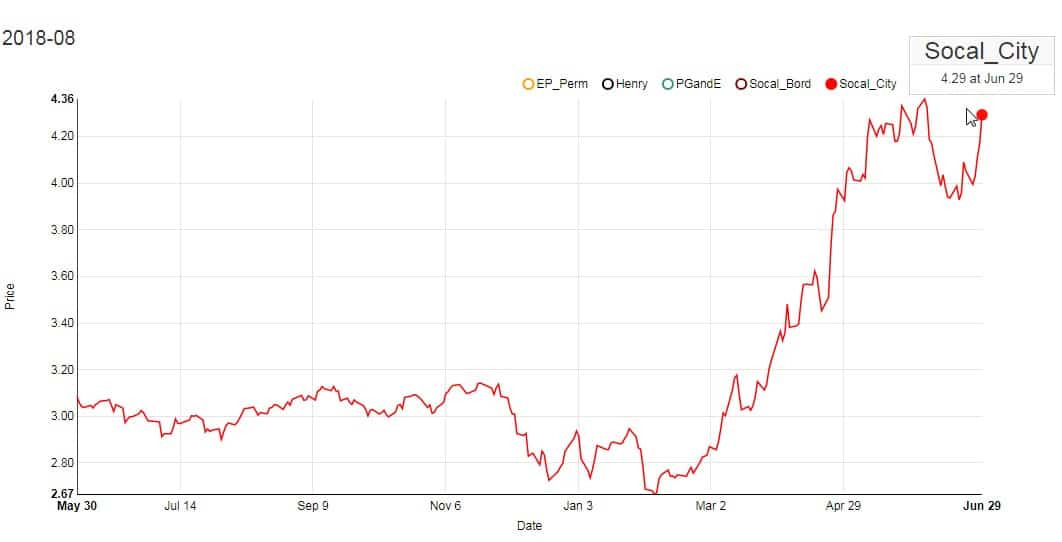 Term gas at Citygate has recouped most of the June collapse, Friday and Saturday will be “The Test” of summer. If Socal Gas can serve all its load on a 105 LA degree day, the summer hype hypothesis can be permanently put to rest, and these big summer premiums will dissipate.  Watch where cash clears this week. 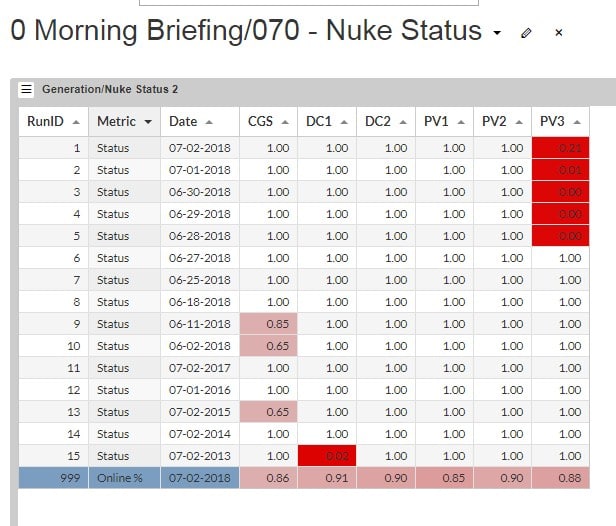 PV #3 is offline adding to the Palo drama. Given the weak Gas Noms at Palo, the loss of that 1400 aMW doesn’t matter that much, not with Phoenix below 100 degrees. 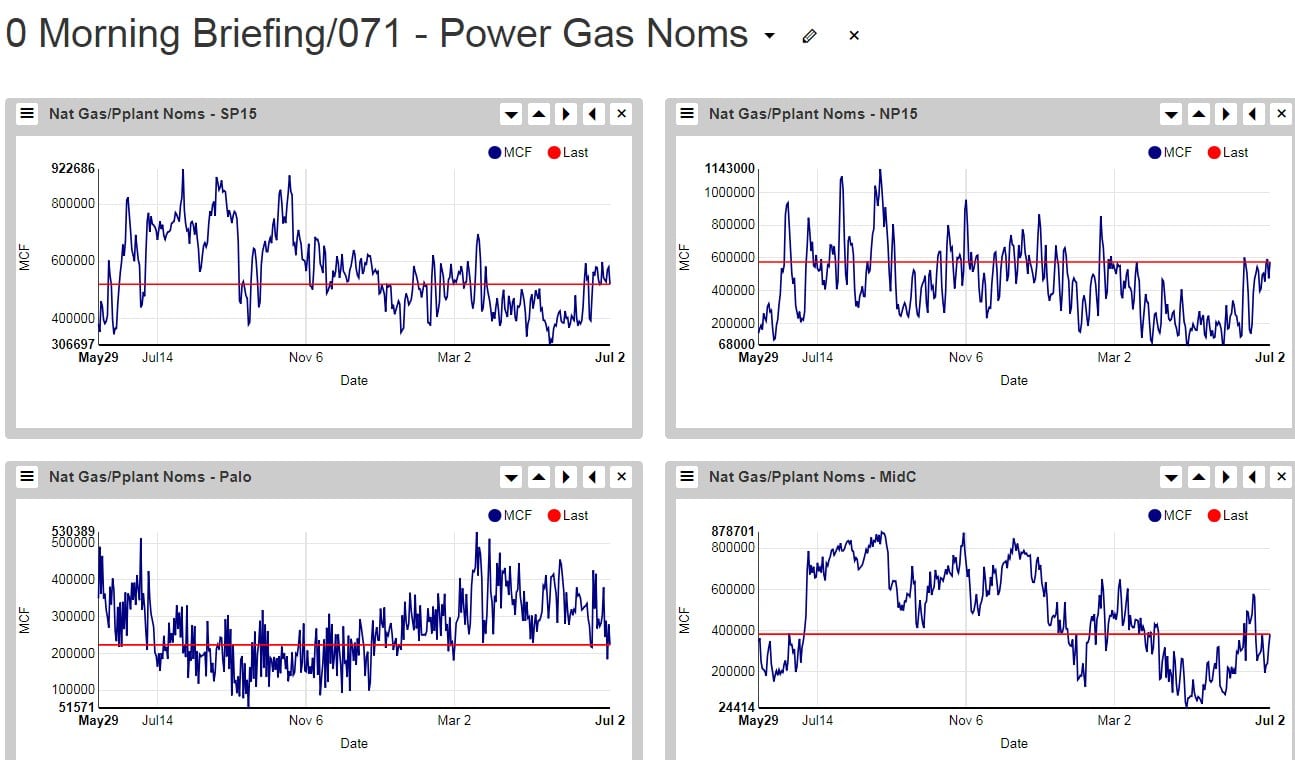 It seems Gila River alone could make up for the lost nuke: 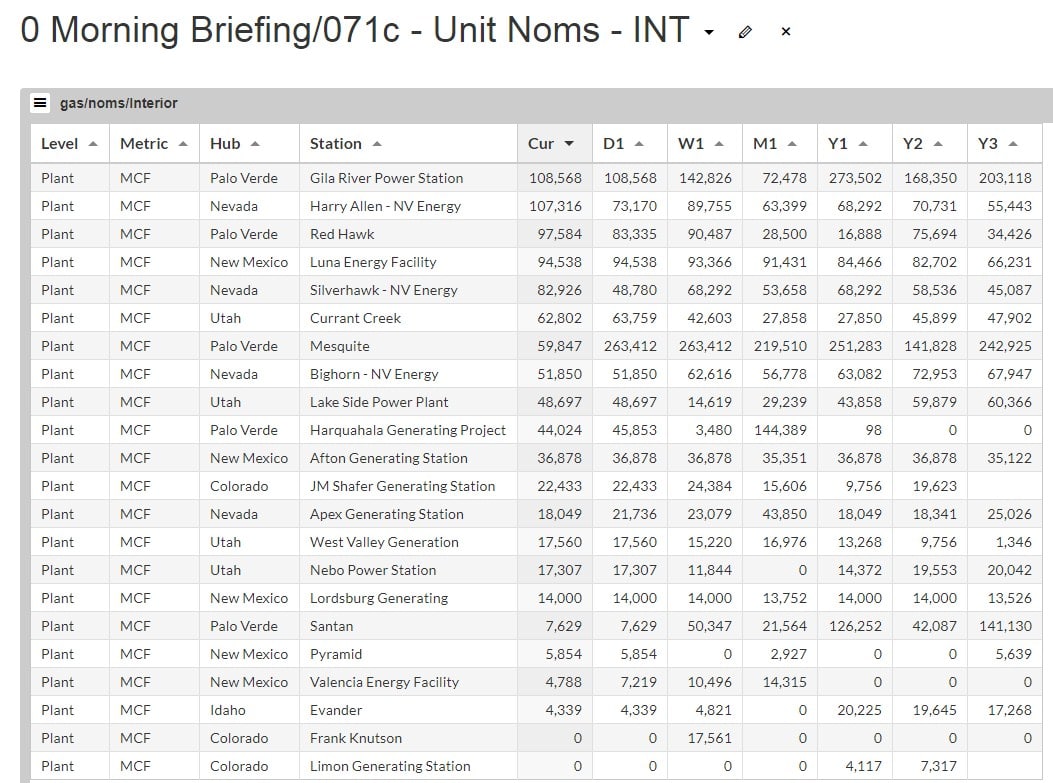 And those noms reflect the lost unit!

Renewables were strong over the weekend, especially at MidC where nearly every hour was at maximum production. 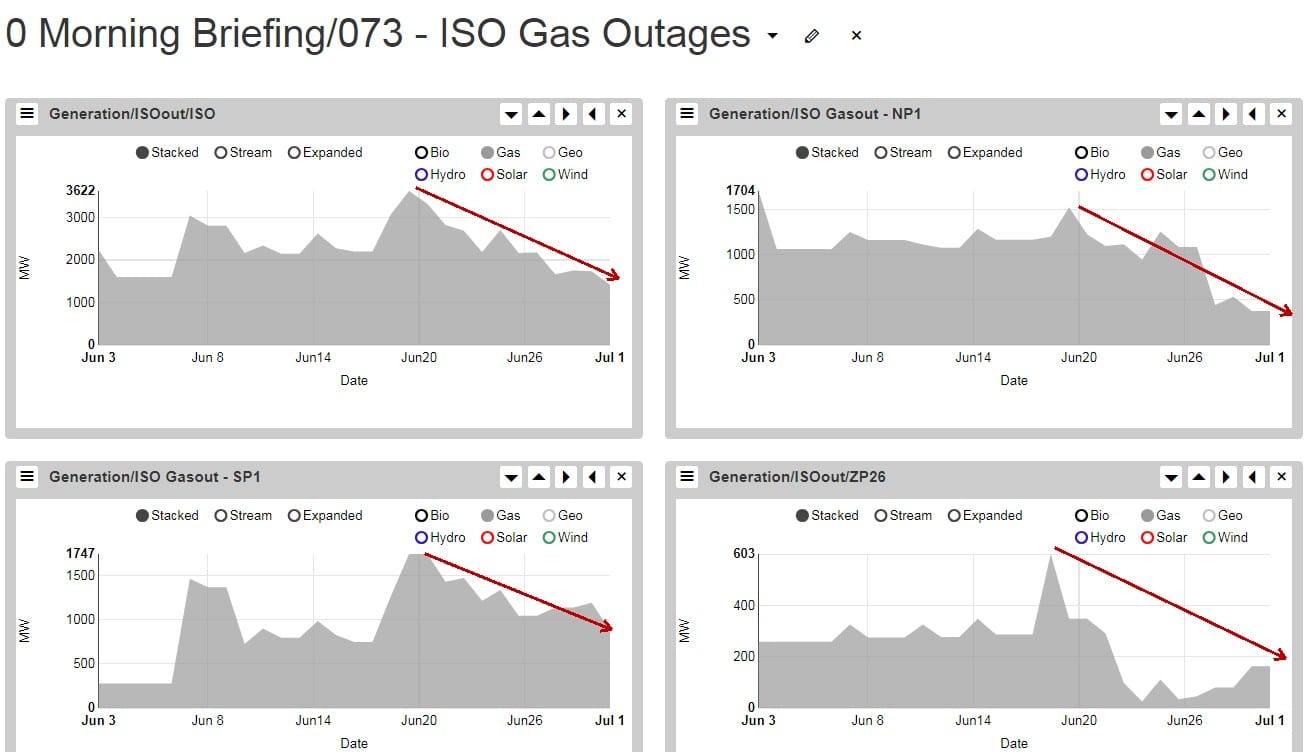 All hands are on the ISO deck as far as unit availability goes; gas outages are at a two-month low.

It is July, yet Hydro still has some newsworthy bullets.

For starters, Coulee never got full! In the old days, BPA always touched 1288′ by July 4. In these days, the feds touched 1285 then “Pulled” water out of the pond, and now it sits at 1284′. Huh? That fact alone is kind of scary, is water really that tight? 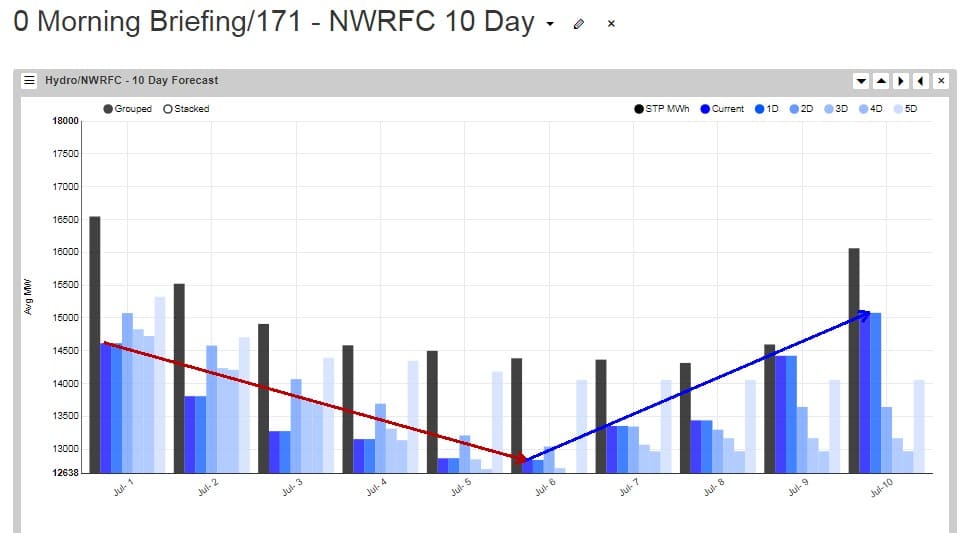 Check out those cuts from last Monday’s STP; the answer appears to be a big YES, water is that tight, though the RFC’s 10 Day forecast does rally in the backend yet every day is lower than last week’s STP, suggesting a bullish number today. 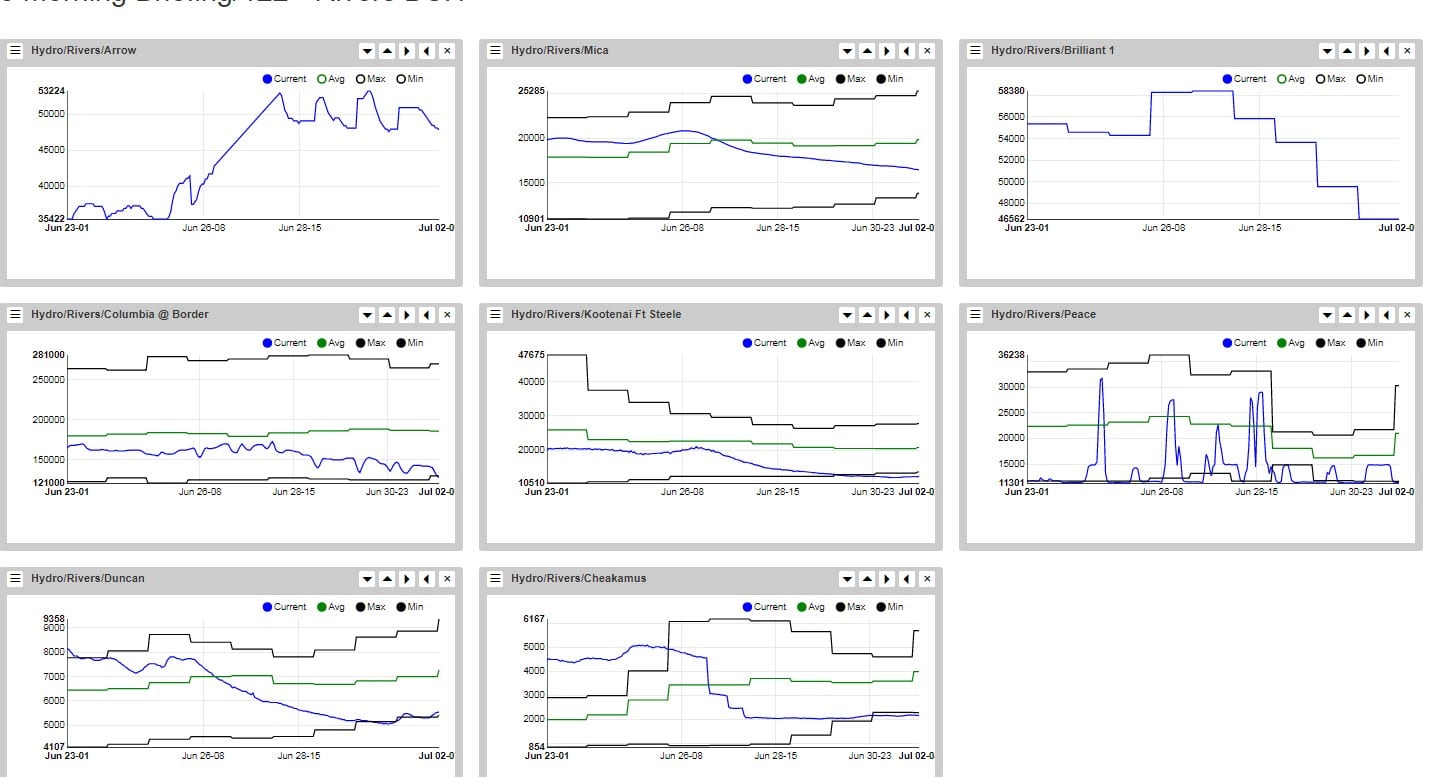 Flows at Arrow rallied all the while total flows on the Columbia at the Border continue their decline. 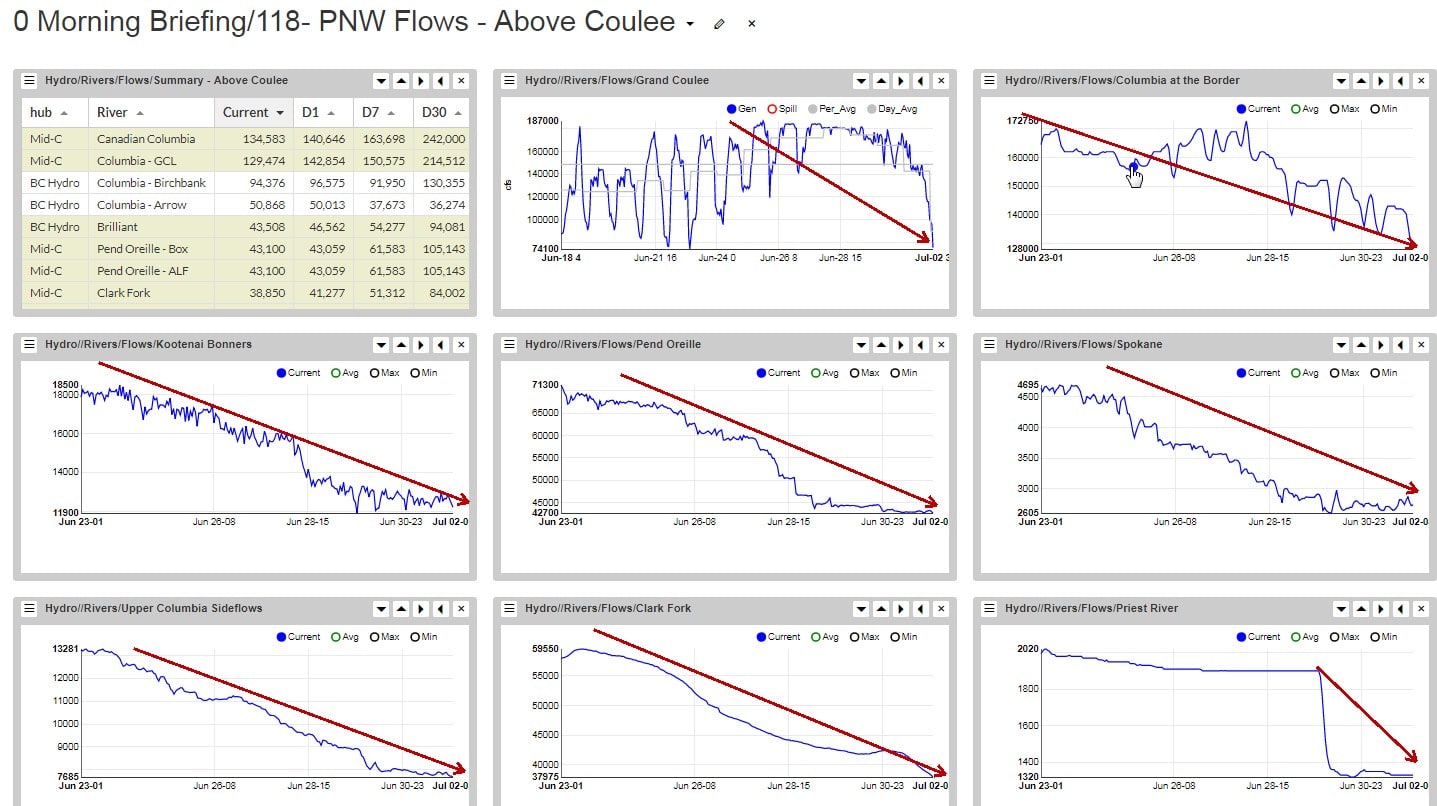 All stations above Coulee are in a freefall; this is what is driving the RFC’s bullish forecasts.

Despite no loads in SP, the energy is all flowing there. Path 15’s direction flipped, Path 26 hit a two-week high and Palo is a big seller to the ISO. The one line that isn’t selling is the DC – it is offline!

Those Friday-Saturday temperatures in LA will be a solid test of Socal Gas’s ability to serve its load. 105 degrees will set records, will LA survive? We’d rather see every city across the WECC hit records on the same day, but we don’t see that. Expect SP15 imports to soar and so will prices.