There are many ways to measure a market’s richness, perhaps the most popular is “GAHBAB.” This method, also known as “Get a Hunch, Bet a Bunch” works much like “flip a coin” and is also noted for its Affirmative Action characteristics as every human, or animal, has an equal chance of winning. We prefer Ansergy’s “APT” ranking system which has been right 63% to 70% of the time.

APT nailed MidC  70% of the time over 3,559 “trades” while SP struggled and was correct but 63% of the time.   For fun, we built a trading system around APT which opens and closes trades blindfolded, if you will, or with one hand tied behind its back if you’d rather. In other words, it is a machine-based trading system that uses Ansergy’s forecasts coupled with other rules-based logic. 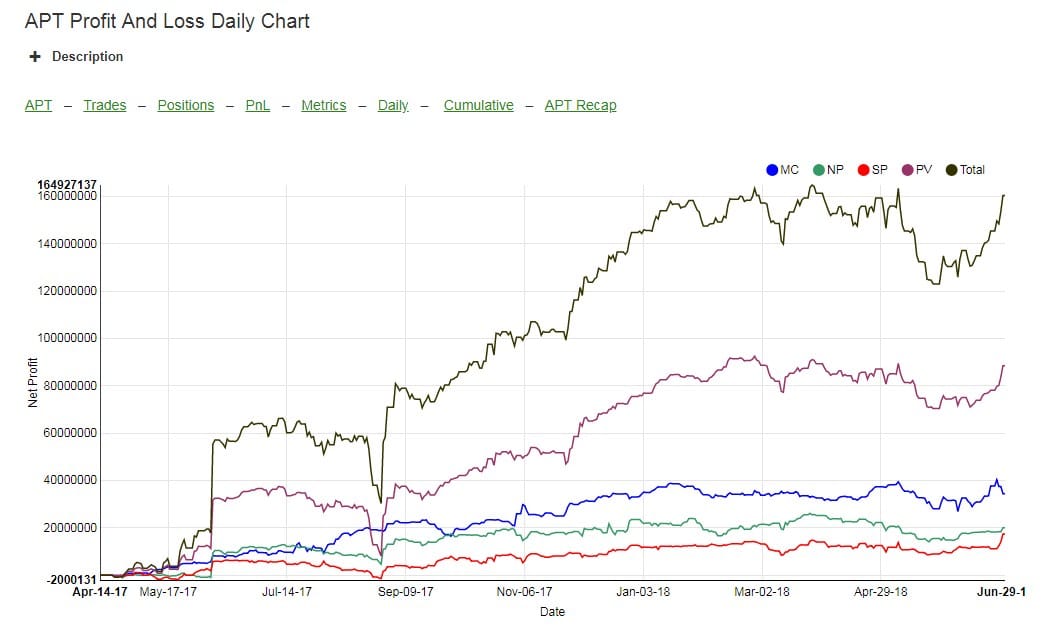 Don’t bother wiping the smudges from your glasses; the number is $160 million in little more than a year. Of course, it had a pull-back in April but in the last 30 days has rallied back, up $37 million. Of course, these are not the position sizes for the faint of heart, but all trades are published daily. The main point is GAHBAB is Garbage when compared to a learned system like APT.

But hey, you say, the blog’s Title was about Settles vs. Market, not APT. Good catch, alert reader, and the rest of the blog is about just that. Ansergy is not one to rest on its laurels; we are always seeking to improve our client’s hedging/trading experience. Several of us like examining a market from a “historical settle perspective.”

So we made a new report that works with the APT product rankings but adds a new dimension – the last eight years of historical settles vs. current market vs. forecast.  You can access the report via the following path:

From there you’ll see the following report:

Hard to read, right, we’ll break it into sections.

Filter on the following to isolate products:

After querying your products you can view the following metrics:

The average, by period, of the daily settles from 2011 through 2018. The As Of Date reflects the market settle date.

Possible Uses of Market vs. Settles

A client recently asked me about July MidC HL and what I thought of the bullet. This report would have been handy.

I filtered on MidC (MC), HourType = HL, Agg = M then sorted, descending, on Average Delta. Interesting, the July has the highest premium of any MidC bullet and is currently trading at an 86% higher heat rate than the average of the last seven years.

The next richest bullet is June 2019 – HAH! What do we know about next year’s snow build? NADA, nothing, zero, yet Mr. Foolish Market has tagged June with a 13k heat rate.

You can go the opposite direction and quickly filter out the cheapest products (Sort average delta ascending):

The “cheapest” product, when compared to historical settles, is Feb SP15 HL, though all Winter SP strips are impacted by the Citygate issues, still from a heat rate perspective it is 13% below the average of the last eight years.

For fun, let’s look at the Cals. 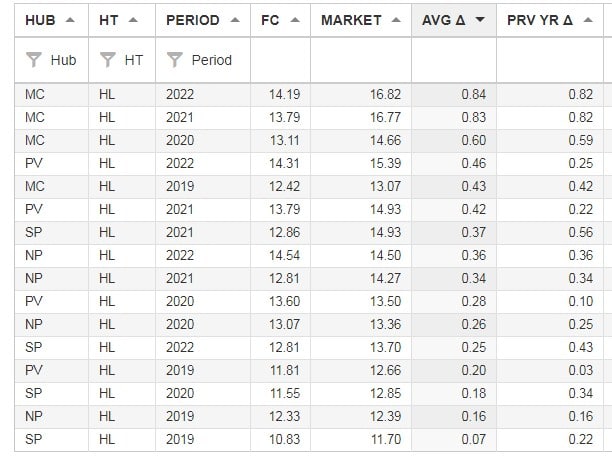 And wow, some vast premiums built into the forward market, at least as measured against where the last eight years have settled.

Grab a coin, get a hunch, or cut open a chicken and see how the entrails spill out. There are many ways to trade and value something; we hope you enjoy using our new Settles Report.