Blue, and in some cases, dark blue. Check out last year’s 6-10 day around the same time:

That’s a temperature forecast, at least if you’re long. Now, if you truly are long, you’re just wrong. But at least you’ve been consistently wrong; this June has chased the global warmers into their hot tubs. Check out these degree day anomalies for the WECC: 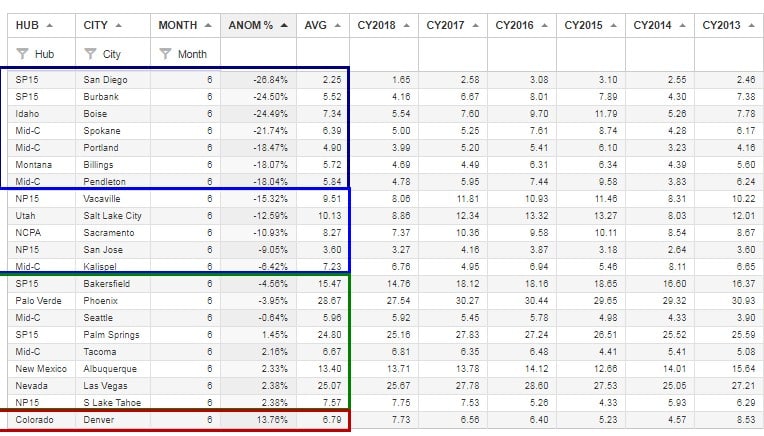 Aside from Denver’s 13% positive anomalies, most of the WECC is having a chilly June and is led by SP’s two load-center cities, Burbank and San Diego. Both are over 24% below average and you need to go back to 2014 to find a colder June in Burbank. So if you stayed long all through BOM at least you were consistent and, on top of that, consistently wrong. So there you go, Trump was right once again. Global warming is a lie created by MS13 to help the Democrats run the oil industry into the ground to be replaced by MS13-made solar panels smuggled in by rapists across our open borders. Where in the HELL is the wall?

On the gas front, we noticed a recent oddity at Wheeler Ridge. 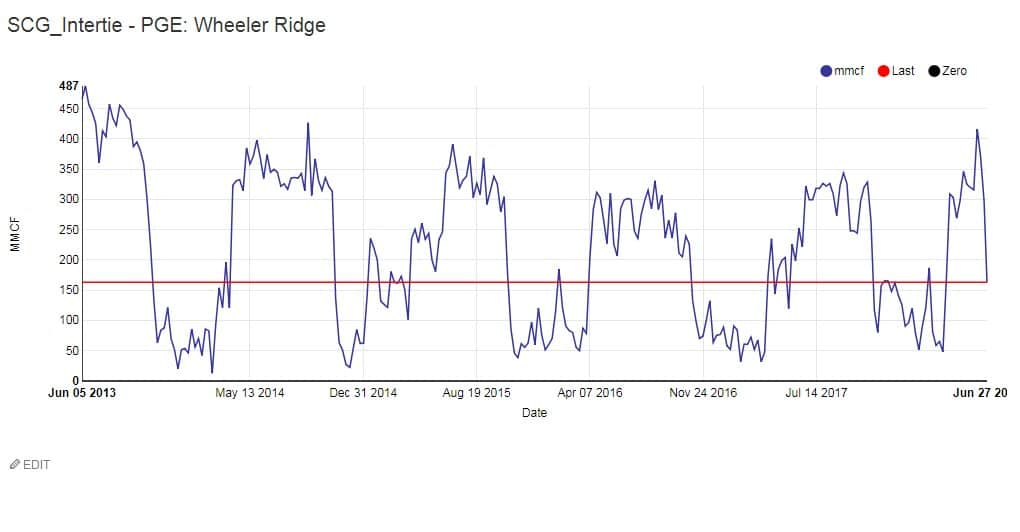 Flows have plummetted, which isn’t unusual, they do every year, but not until Oct-Nov. This is the first time in five years we’ve seen flows at Wheeler Ridge (into SCG) drop in June. I have no explanation but found it singular, and perhaps one of our alert and knowledgeable gas readers will be able to explain it.

Something else that plunged was spot gas … 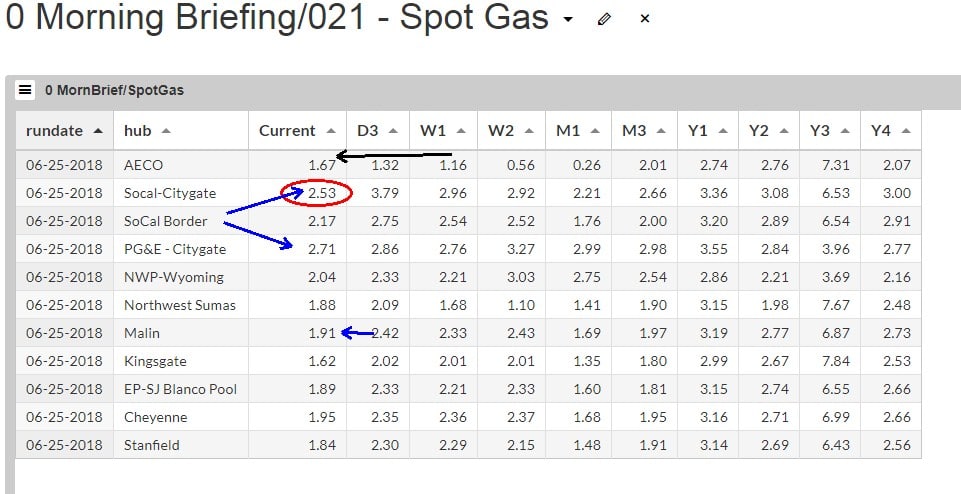 Weekend Cal prices saw the spread flip, but it has done that every weekend for weeks. More interesting has been the collapse – almost $0.50/mmbtu at nearly every other WECC hub, all in just a few days. That drop cannot be explained by Nymex as Henry is off but a dime or so.

Term gas at SCG has also seen some changes, though none make much sense. 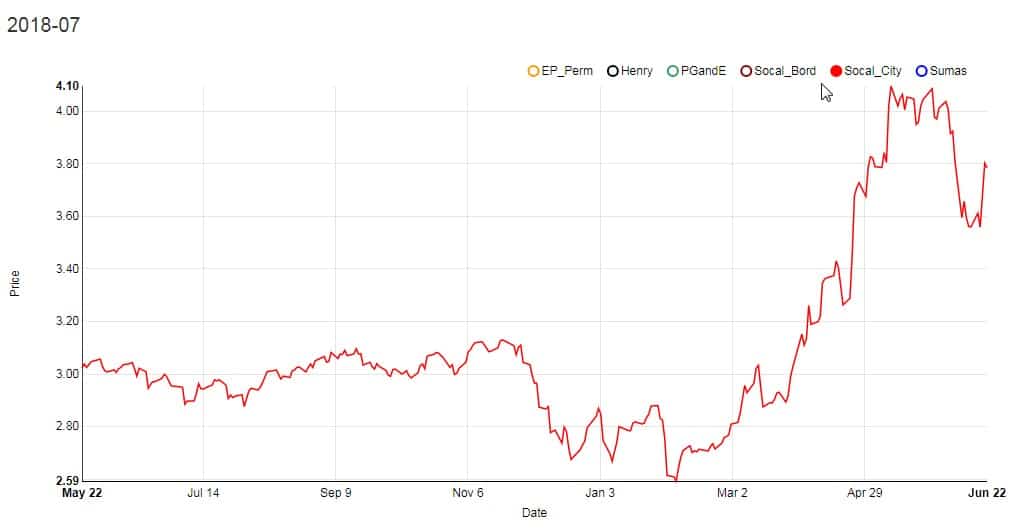 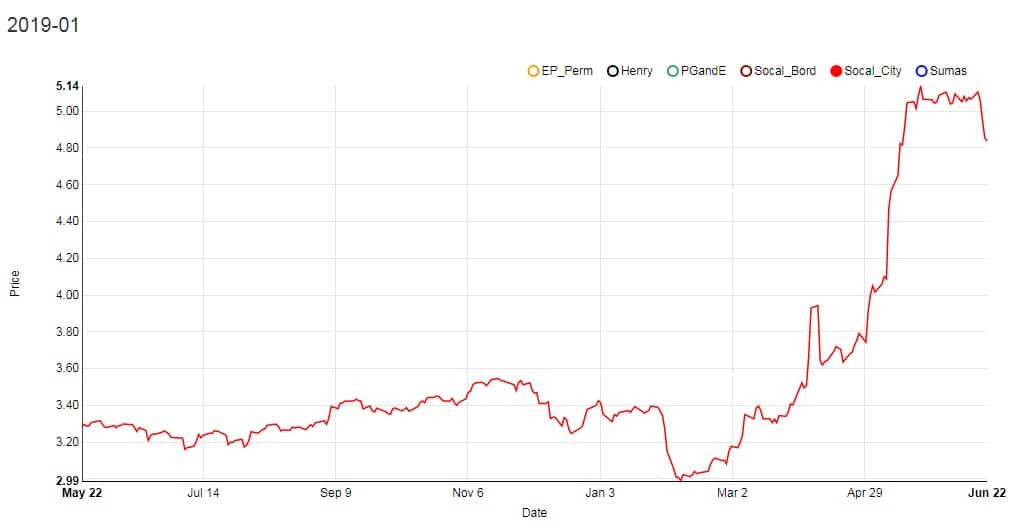 After camping out at $5.15 for a month, SCG drops $0.20 all the while July rallies. The Jan-July roll got crushed. What changed in Jan? Nothing that we can point an accusatory finger at, and we already shared out July thoughts. Oh well, another day in the SCG dramarama.

LMP prices behaved as expected – they are moderately weak.

Minimal congestion and small on/off spreads. Endemic of a moderately weak market that seems to be growing even more bearish across the coastal load centers.

Did we say everywhere was growing bearish? We meant everywhere but Palo, the southwest is returning to normal, even above average. Vegas is a blistering oven and has posted a string of days hotter than Phoenix. Both cities will be warm for the rest of BOM.

Then there is Burbank which hangs on to climo for a couple of days and then capitulates going into the weekend and posts a few days 5-10 degrees below normal. Ugghh. And San Diego isn’t much better unless you live there and aren’t long power. In that case, this summer has been perfect.

NP loads rallied sharply, week-on-week, off of warm interior temperatures and a cool set of days last week. This coming weekend is also sporting some positive anomalies which doesn’t exactly dovetail with NOAA’s 6-10 day, but we’ll go with NWS 7 day over NOAA’s pictures.

Well, then there is the MidC. Before whining about the cold weather, check out yesterday’s Portland|Seattle spread – 19 degrees warmer in Portland and it is but 150 miles apart. That is something you don’t see every day, and you won’t see it again this month. Both cities drop into the Ice Ages heading into the Fourth, hopefully, will rebound before the holiday. Look at those low 60s in Seattle. Those are “Heating” degree days – LOL.

All the nukes are running, most of the WECC’s gas isn’t because there isn’t enough demand. 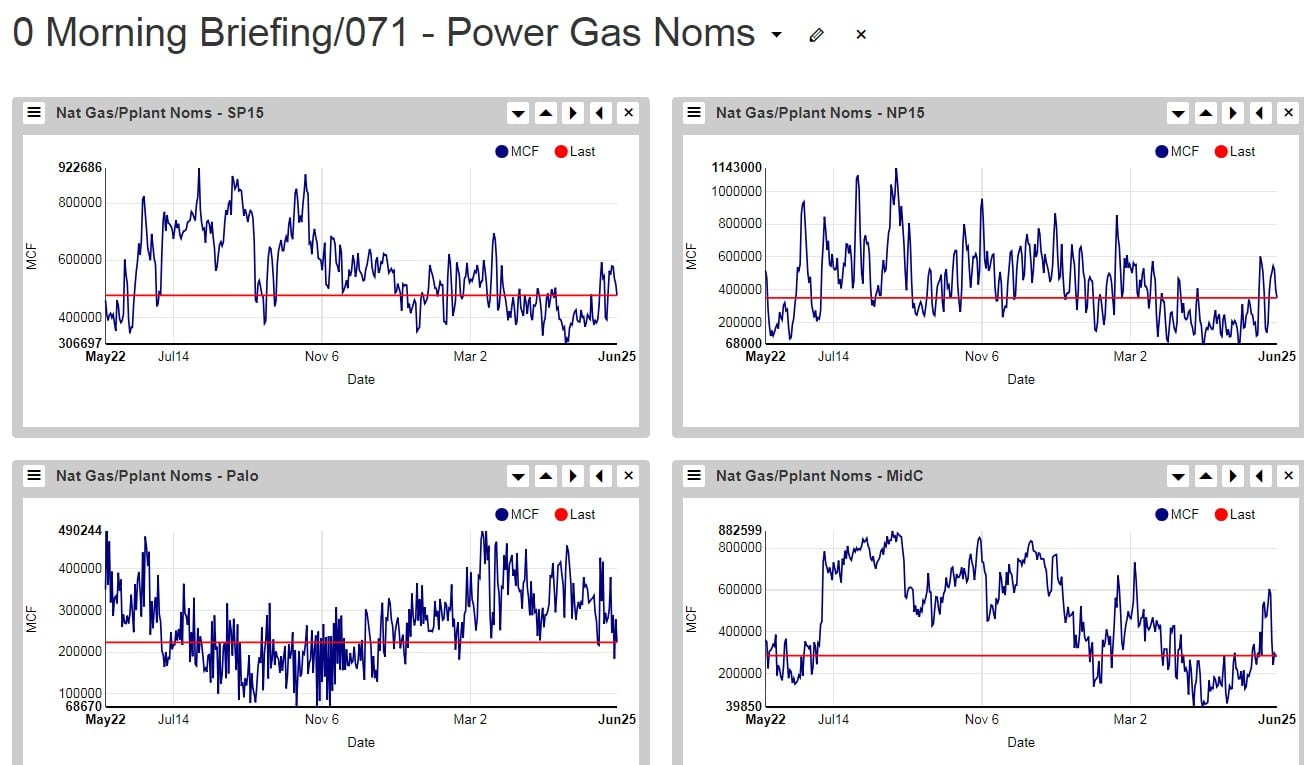 MidC saw the most significant drop in gas nominations for power plants. 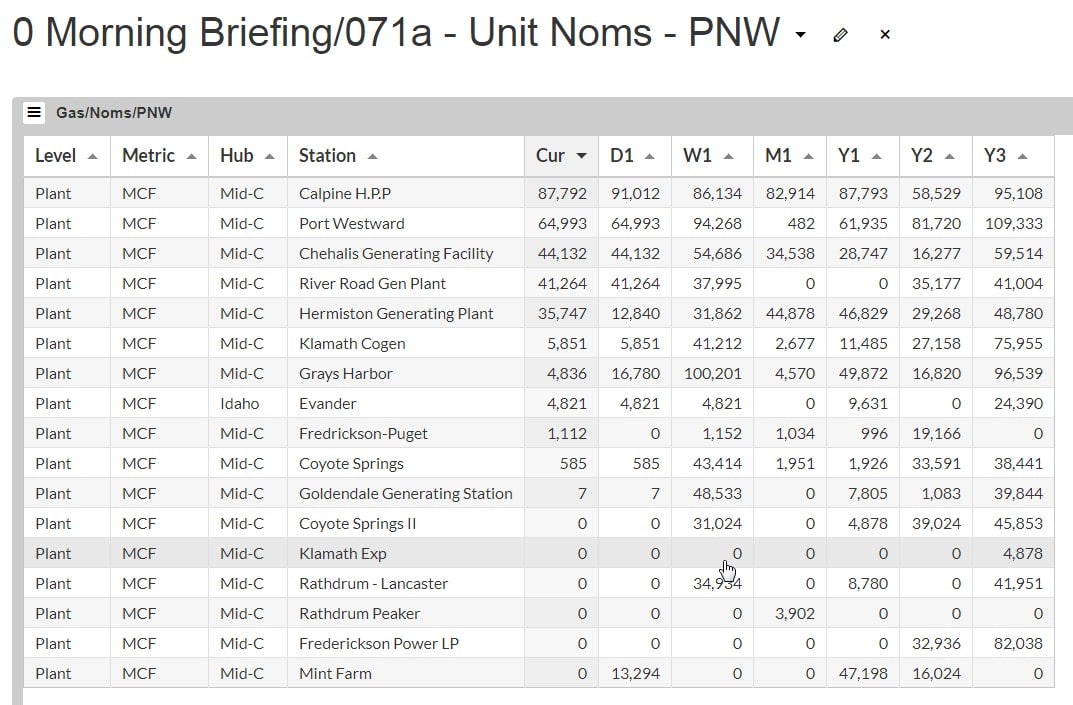 And we’d expect those drops to extend throughout the week as Portland sheds the 90s for the 70, perhaps 60, handles.

And to toss salt into the long’s wounds, the wind blew across the WECC; this weekend BPA saw its biggest 24-hour production in weeks all the while the ISO was in cloudless bliss.

We’re not done ranting about hydro just yet; there is always something to say regarding this 60 gig resource. Let’s start with reservoirs.

BC is now ahead over normal elevations but still has a long way till full. The Northwest has fallen behind average, but not by much and can quickly get to full over the next cold seven days. BPA will have no pressure to draft for demand and will coast to full by the fourth. Bravo BPA, another masterful performance. California is well above “normal” which means lots of shaping bullets for summer. 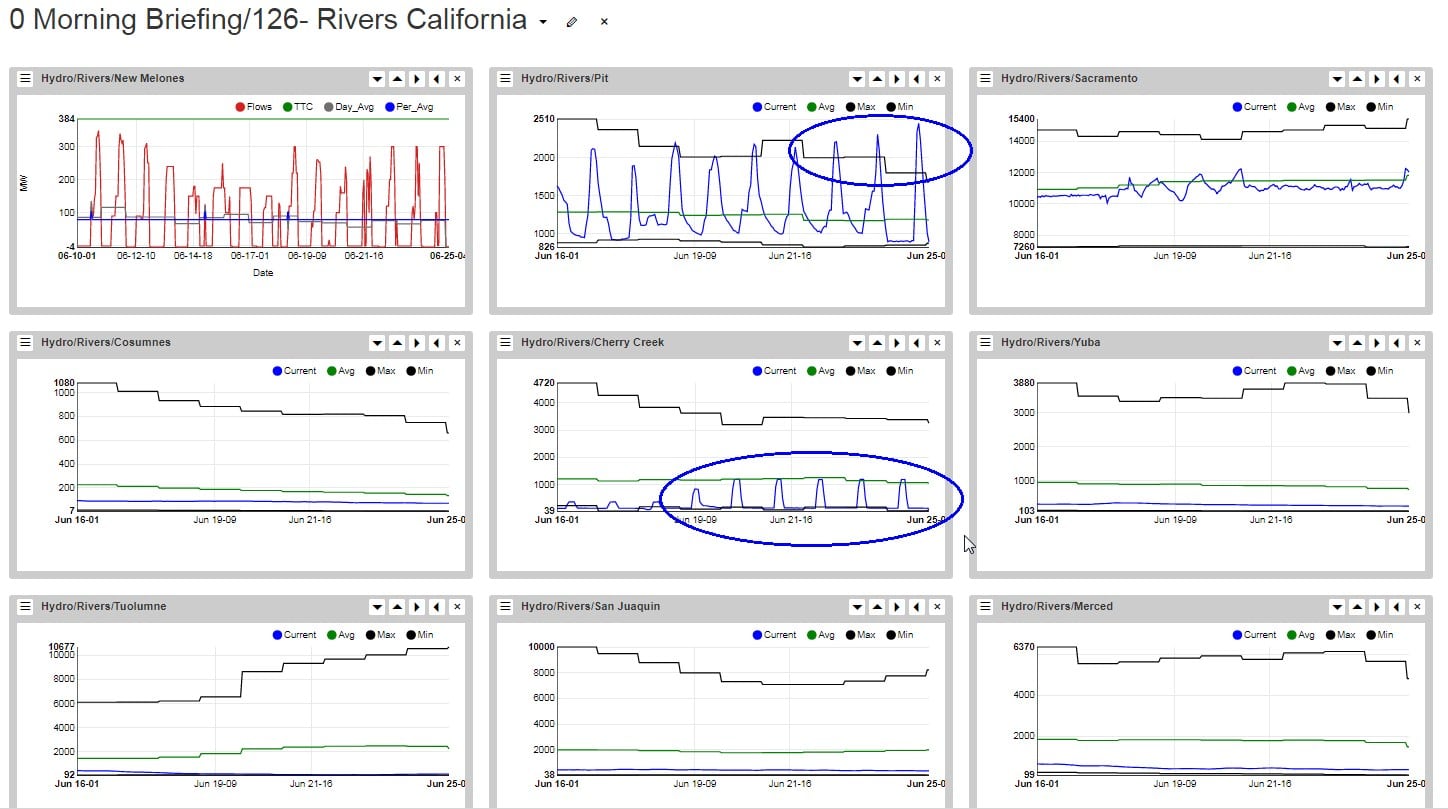 Check out the Pit River, it set ten-year records on discharge for a few hours and speaks to its robust reservoirs. 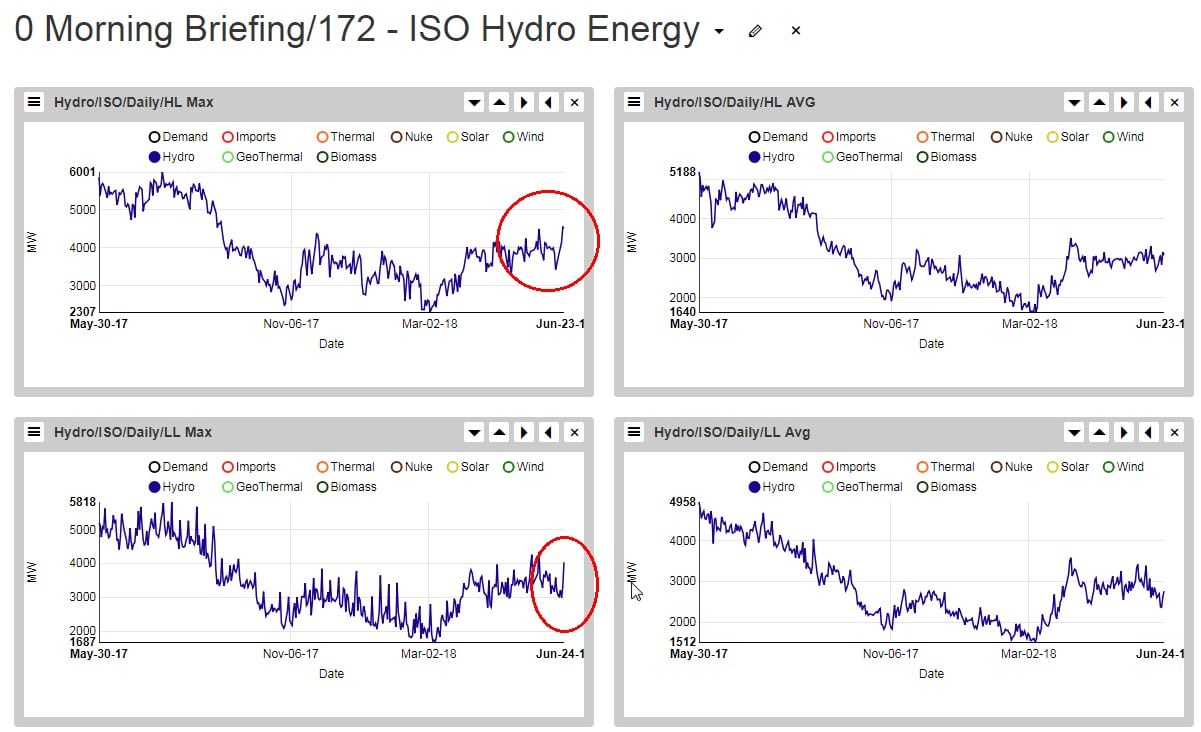 Though ISO loads were anything but strong, we still witnessed sharp spikes in peak hydro energy output – in both LL and HL, all of which speaks to the exceptional health of ISO hydro.

Coulee is sitting at 1285.5 feet and will kiss 1290 sometime before the Fourth. BPA can achieve that blindfolded and passed out on the floor given the dearth of power demand over the next week. Total energy production picked up at the plant, perhaps to serve those 90s in Portland. We also noted the peak is extended across HE11-20, there is no pull-back for the ISO’s solar ramp up.

Mica has doubled its discharge and is now sending 25kcfs to Revelstoke. Brilliant derived discharged is also up.

Ice Harbor saw production rally off some regulation change, the rest of the mainstem projects are unchanged. 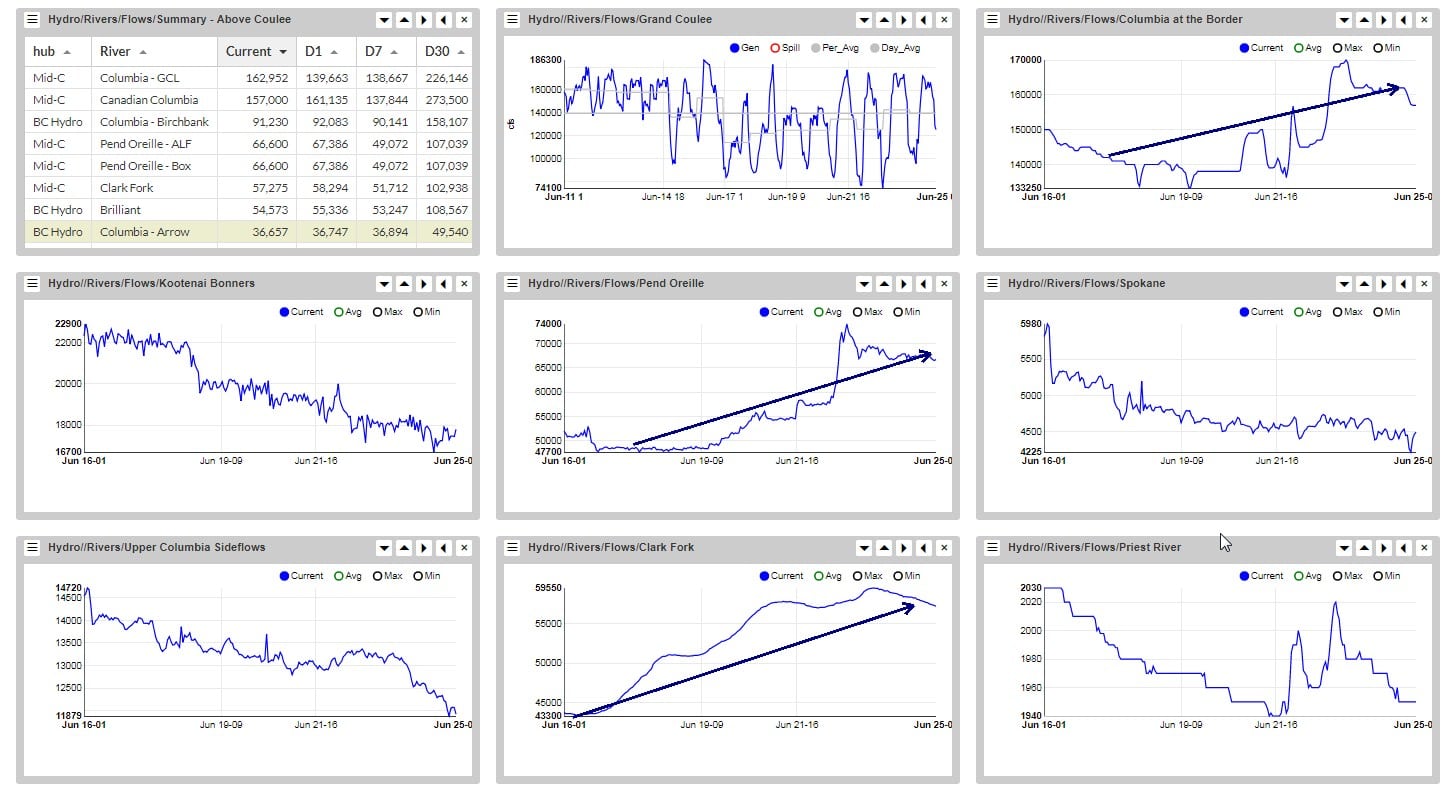 Call it late snowmelt, though there isn’t much of that left. 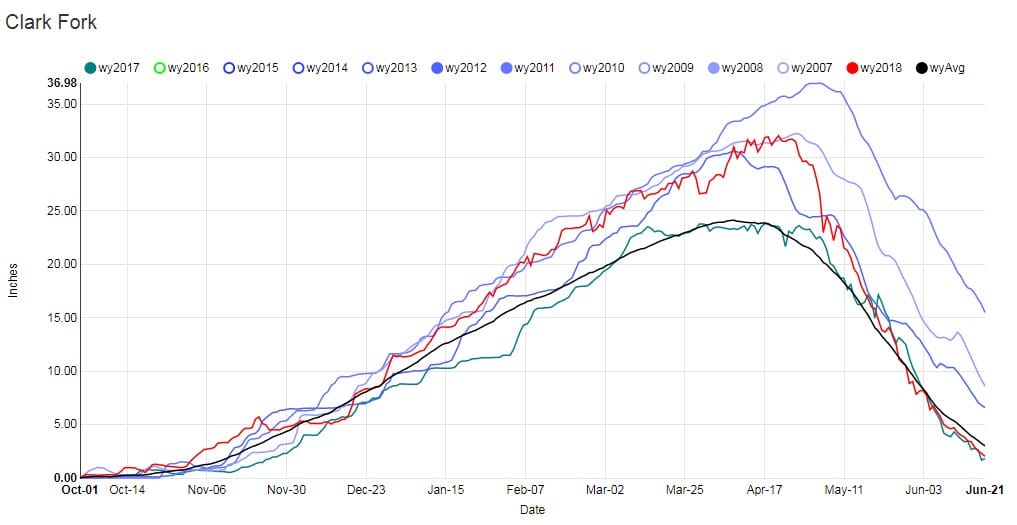 Today is STP Monday and our best “tell” is the RFC’s forecast for ten days: 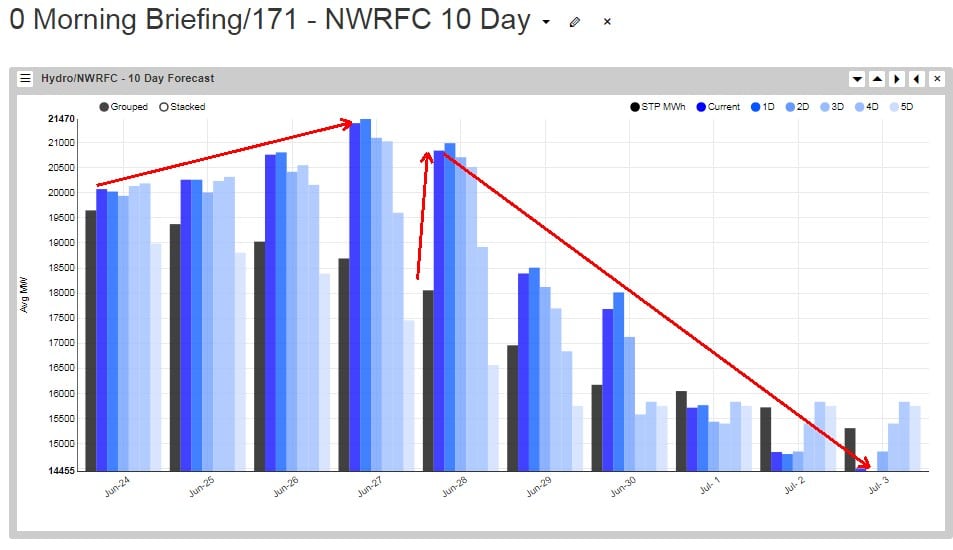 Total energy is projected to grow from today through the end of the week, which is surprising given that total demand is declining. Also, note the delta between last week’s STP and the most recent Ten Day forecast – nearly 2000 aMW of energy equivalents.  Finally, note the precipitous collapse in EEs from June 30 into July, an approximately 5000 aMW fall. Quite volatile, but we doubt the STP seems much change. 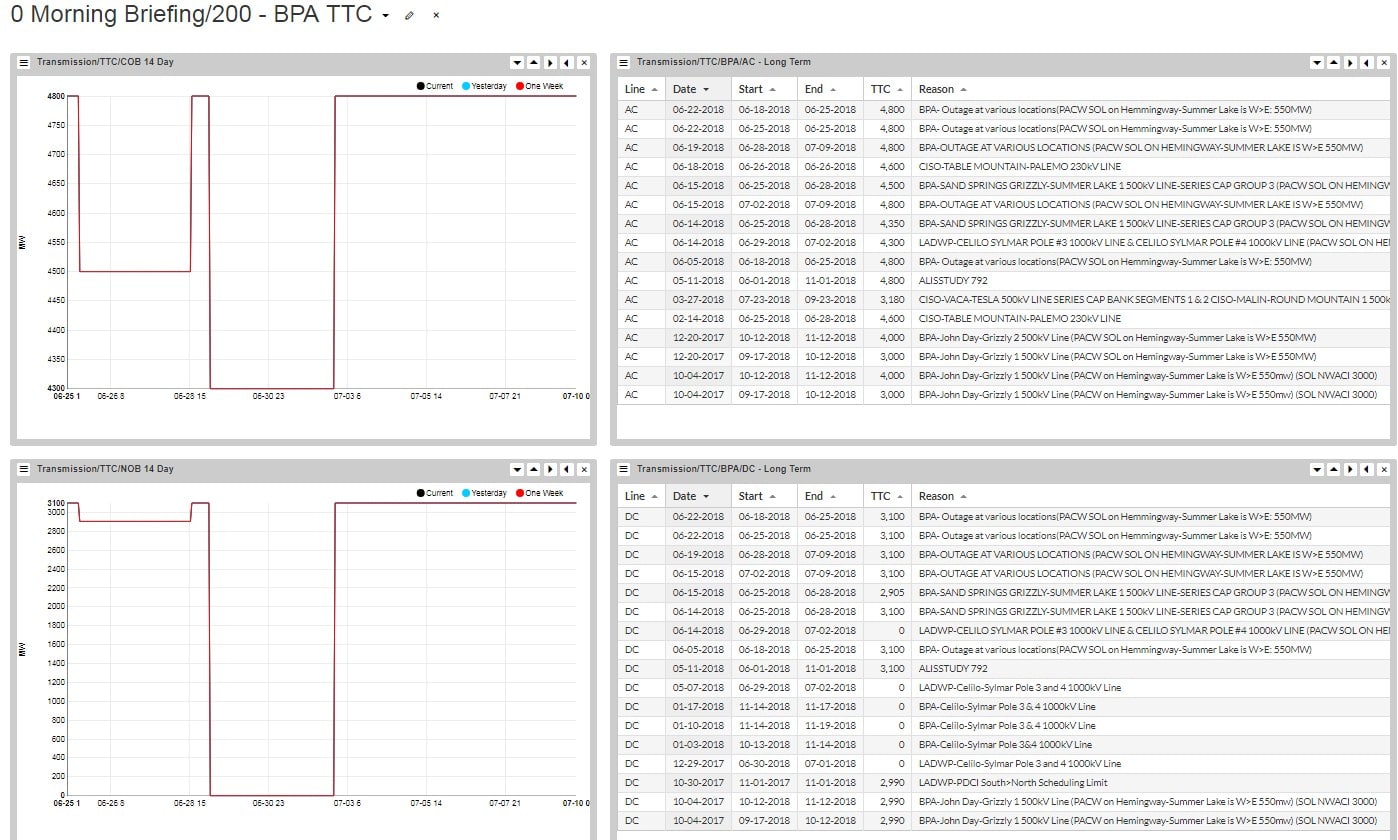 No changes in BPA’s TTC, either short-term or longer outlook.

Imports from Canada have been steady and strong the last couple of days. The DC has camped on TTC for more hours than it hasn’t; typically we’d see cuts during HE11-14, but we aren’t. Palo cuts hard, but not on peak solar hours; they are cutting every day on HE19 to serve their own load.

Bullish in the Southwest, bearish in the ISO but more so in SP than NP, and bearish in the Northwest. The system is flush with idle capacity and no degree days to serve. The good news is BOM is mostly over so even if it craters today there aren’t a lot of MWH left in it.