The Northwest enjoyed its first heat of the season and traded tight to the relatively weak ISO; the latter failed to pick up its first big heat event, the outlook remains modestly warm. 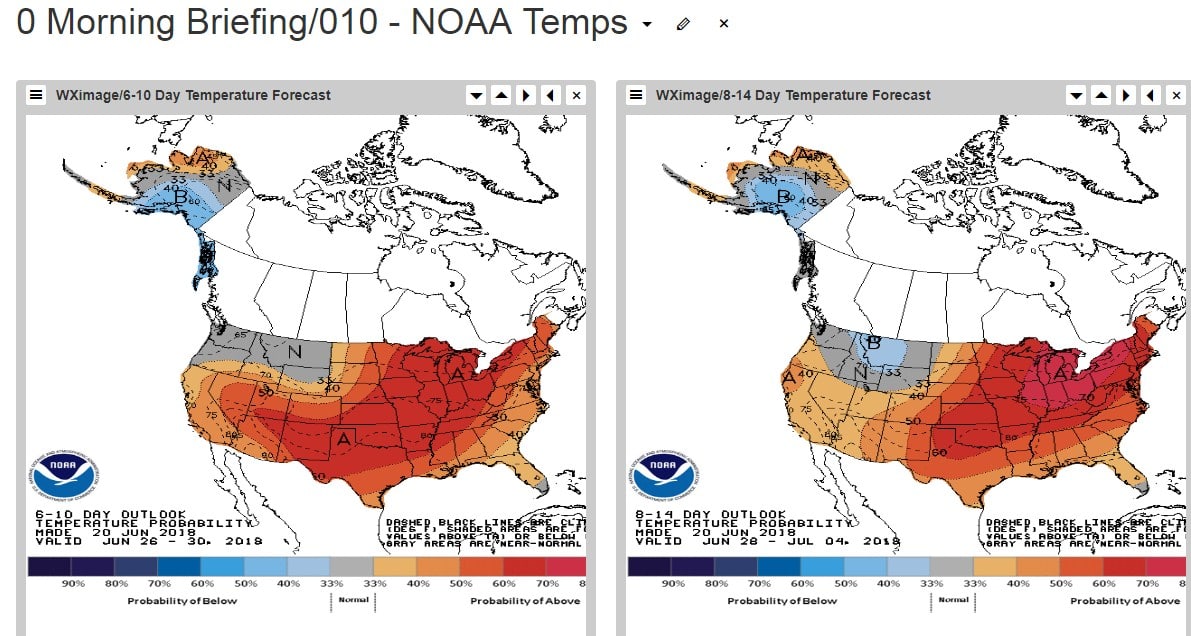 NOAA’s snapshot of temperatures says it all – barely busts normal down south and the Northwest returns to the low 70s. Probably a good time to take the family on a three-week vacation, come back and maybe the WECC will be more interesting, for now, it’s an utter bore.

So dull, couldn’t even find a number to circle. Check out those SP15 heat rates – 9k to 11k, every day, and NP isn’t much better. The Northwest traded tight to the ISO through its heat wave and now that it has lost the heat will it collapse? Kind of doubt it, water is tightening, and the ISO isn’t rallying off of loads, or anything else for that matter.

Citygate tightened, but doesn’t look like Socal will support a four handle for summer. 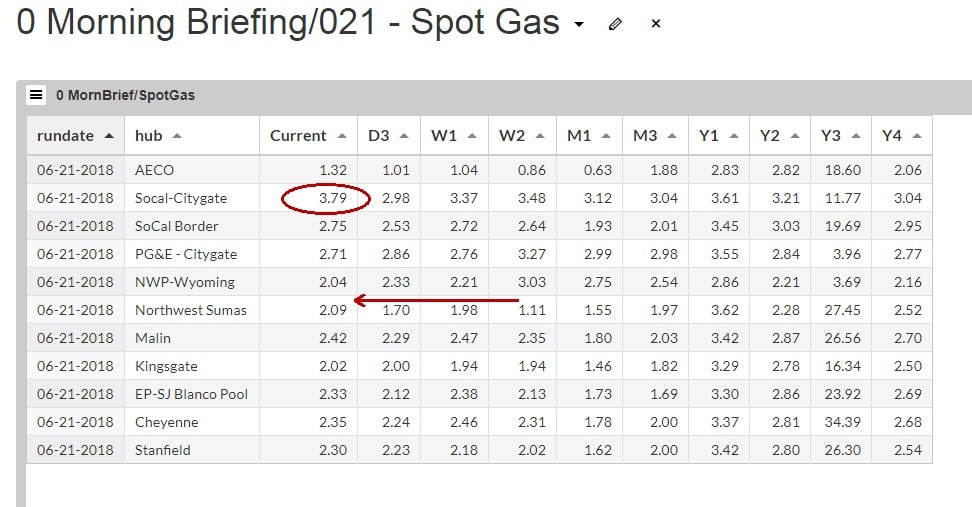 Sumas rallied, too, up nearly 100% in two weeks. We suspect the strong gas demand driven off of the heat explains most of this dubious bullishness. 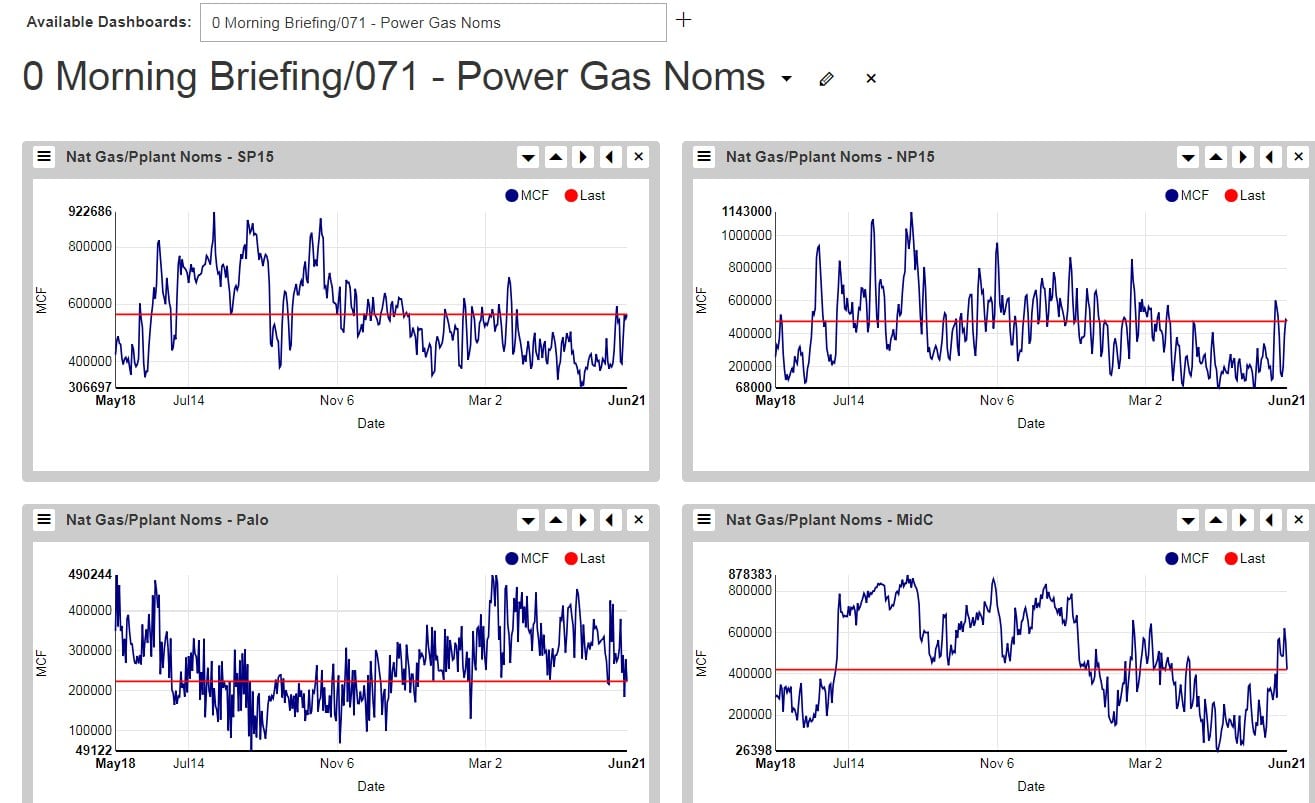 Total Northwest gas demand slipped yesterday and will slide further through the weekend, but tightening water will keep most of those 7k units running. Both NP and SP rallied off of their May-June lows, but levels are dwarfed by last summer.

MidC was the story this week, yesterday’s demand peak was 4000 MW higher than a week ago. But, alas, the heat is gone, and the hub is staring at average to below normal for the foreseeable future.  By the way, Portland hit 94 yesterday, and we’ve seen deep into the 100s at the City of Roses – those are the hot days.

NP has a couple of teasers out there – one of them lands on a Saturday, of course. But in days 8-10 there is a two-day heat event but don’t bank on it just yet, plus it is too short-lived to matter and doesn’t show up in the other hubs.

SP is like that movie “Source Code” where the guy keeps waking up right before the train wrecks. Every day the longs come to work and hit F5 on the NOAA 6-10 day a dozen times hoping to get a different set of colors, but it always comes back gray or yellow.

OK, here is some action, Vegas hits 110 today and is hotter than Phoenix. Like NP, there is teaser heat in the back of the 6-10 day. 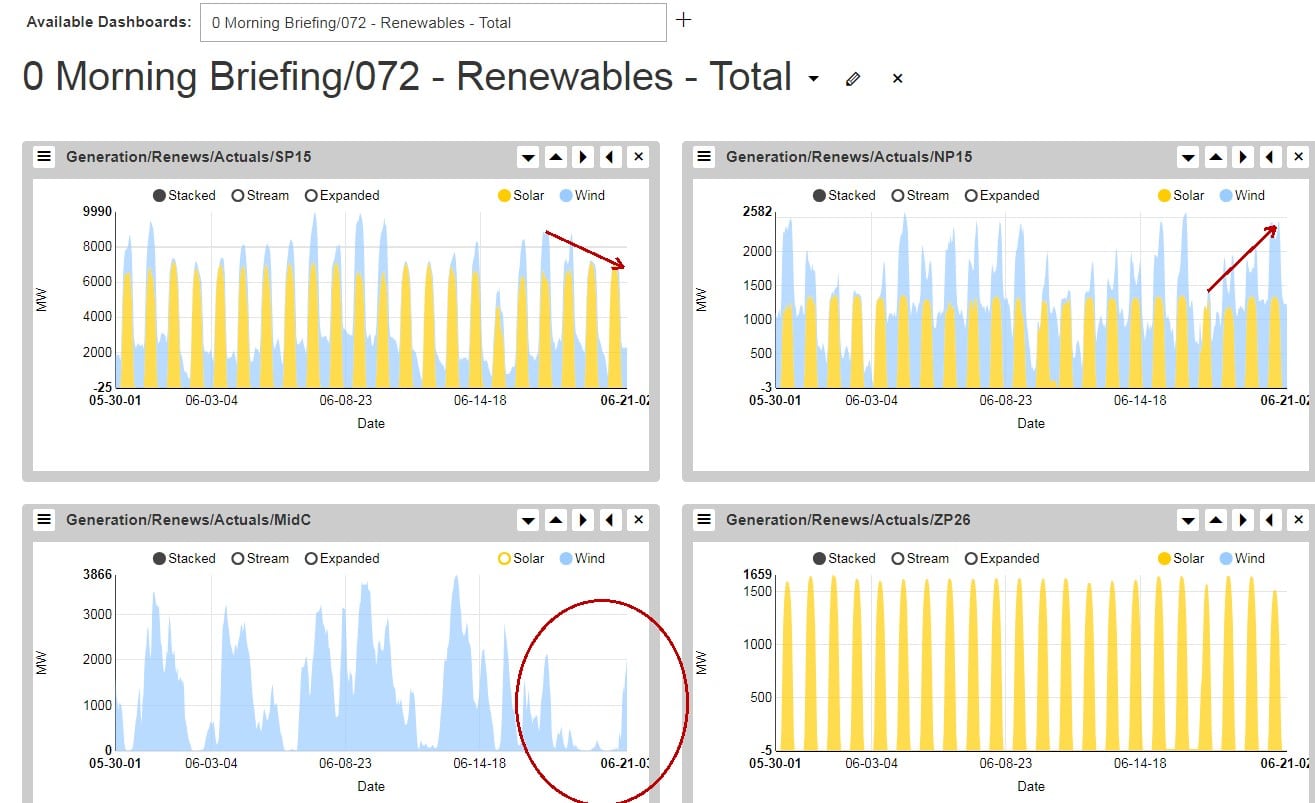 SP lost all of its wind, but NP didn’t, they saw theirs rally and the hub that actually could have used some wind saw its turbine blades cumulate cobwebs. 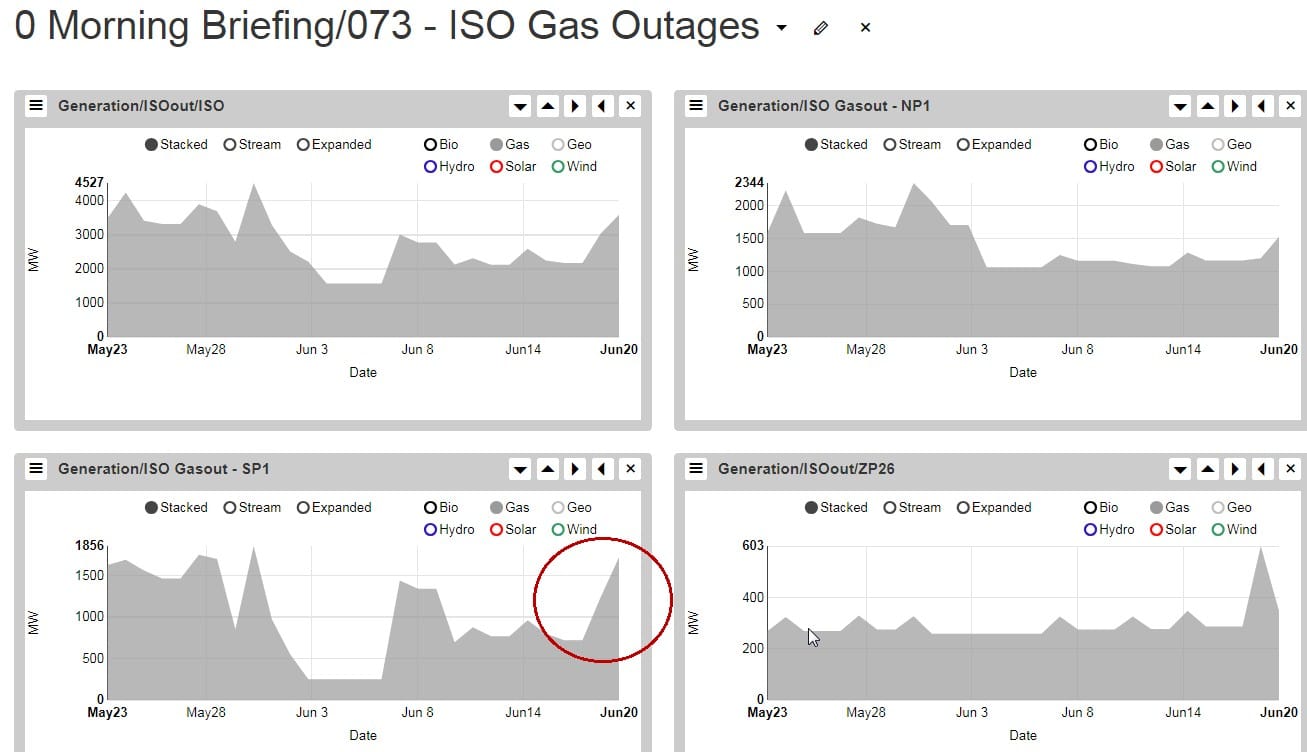 Whoa, here’s some bullish news for SP – gas outages rallied. Too bad 90% of those units wouldn’t be called upon anyway, but the chart looks good. 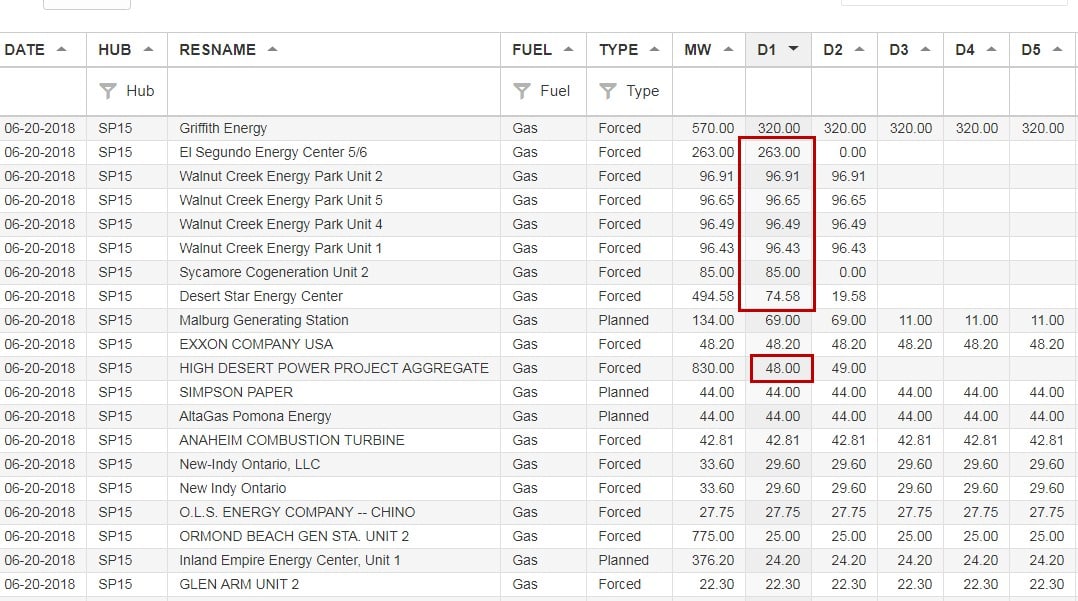 We mentioned Monday that BPA might need to draft its ponds to serve loads this week. Well, they didn’t draft, but they didn’t fill either and now the Northwest is 300 MAF behind normal. That shouldn’t be a problem recovering, not with temperatures cratering back to normals.

Coulee discharge continues to slide, but the rate of descent was arrested over the last couple of days as BPA scrambled to cover that 4000 MW peak demand rally. The pond now sits at 1283.7′ and has but a modest 5-6 feet to go until functionally full. Yawn. 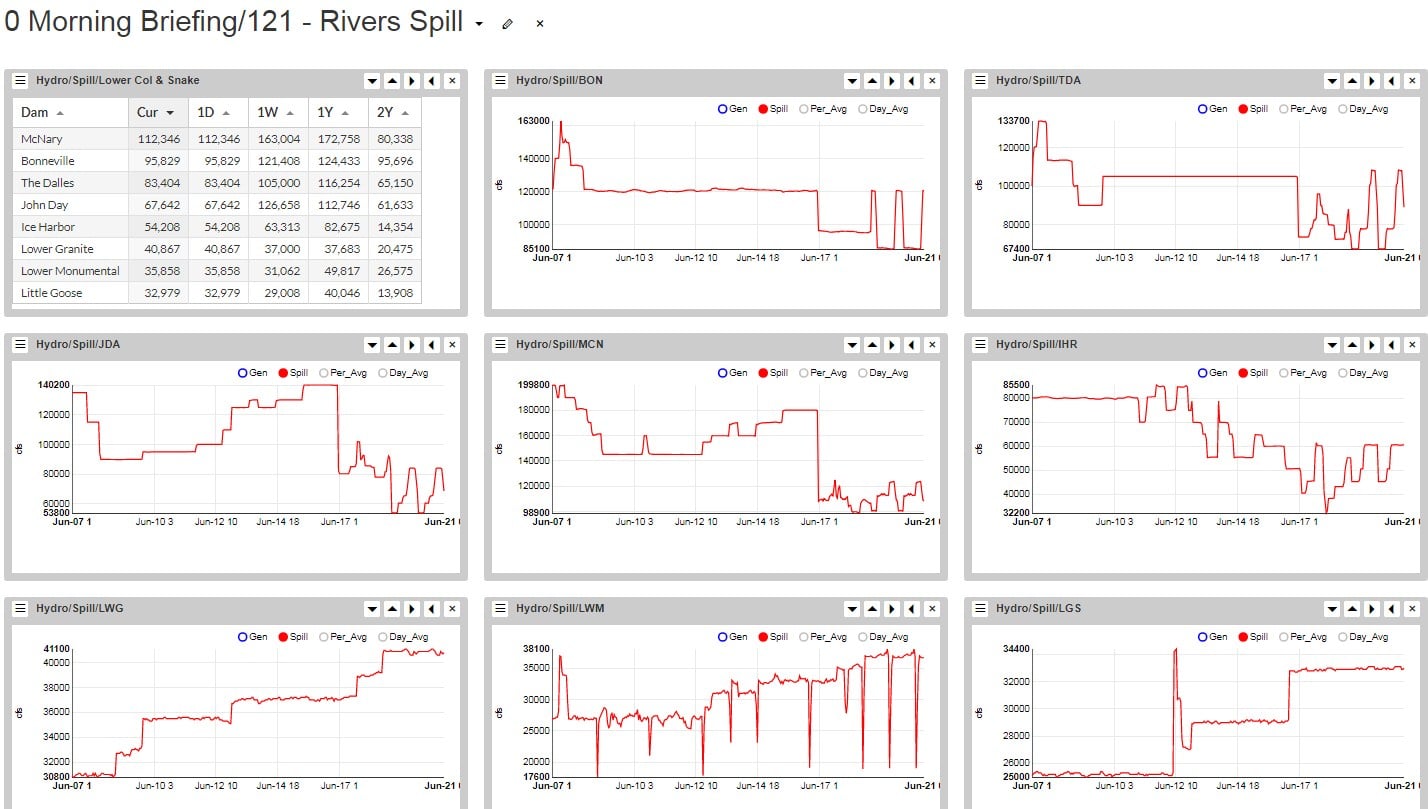 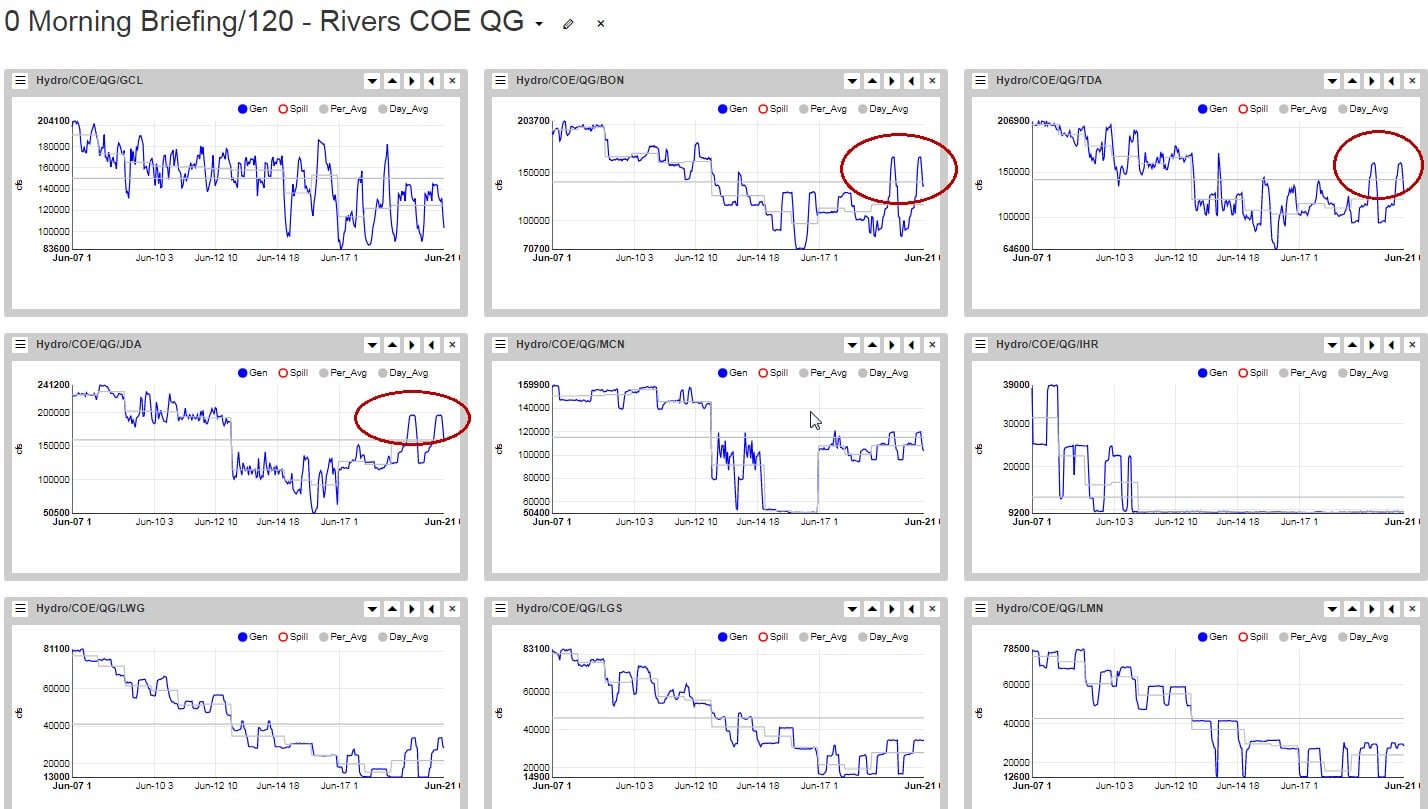 And turbine discharge cycled harder than previous days as BPA flexed its flexible might in meeting loads. 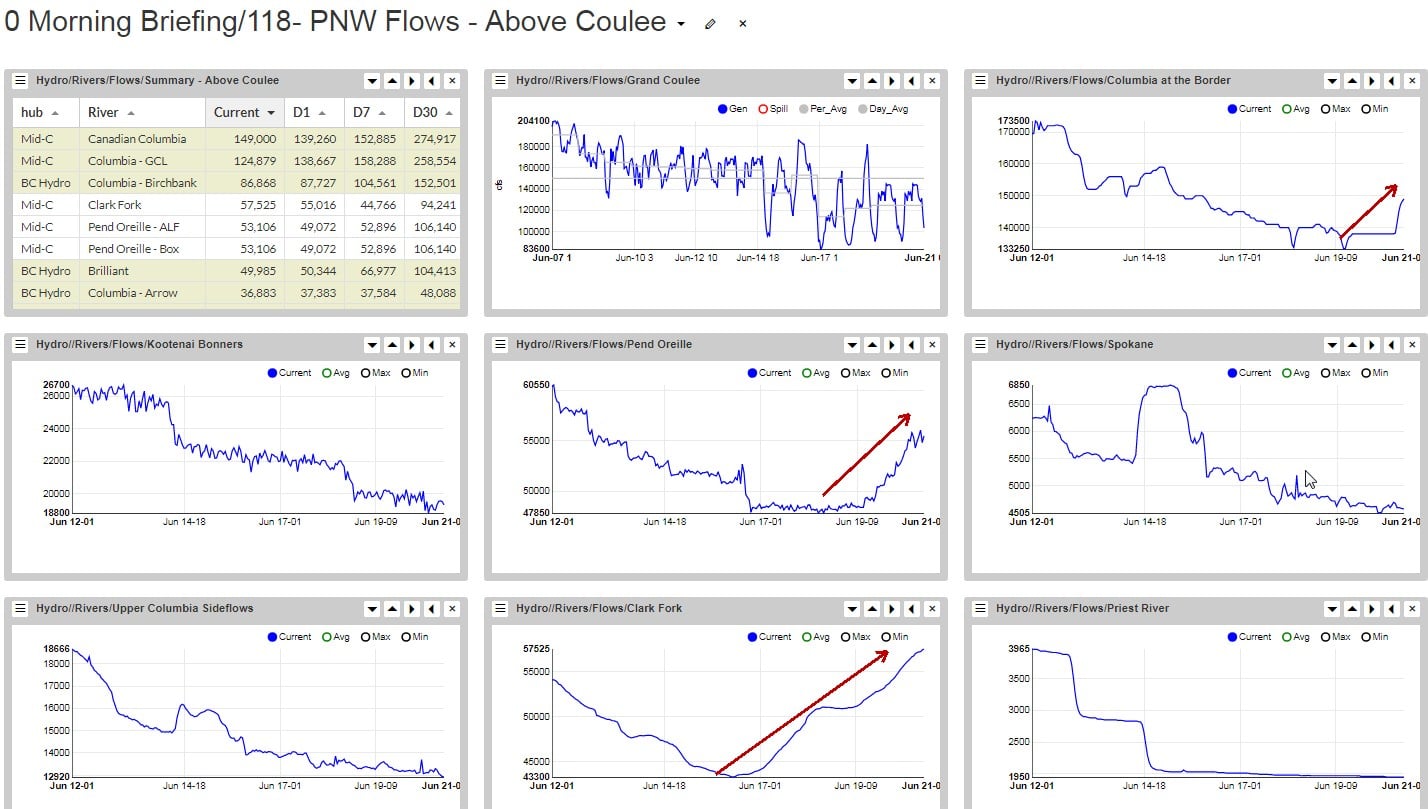 This is interesting, both the Clark Fork and Pend Oreille saw rallies. Call it regulated as BPA needed bullets to serve demand. 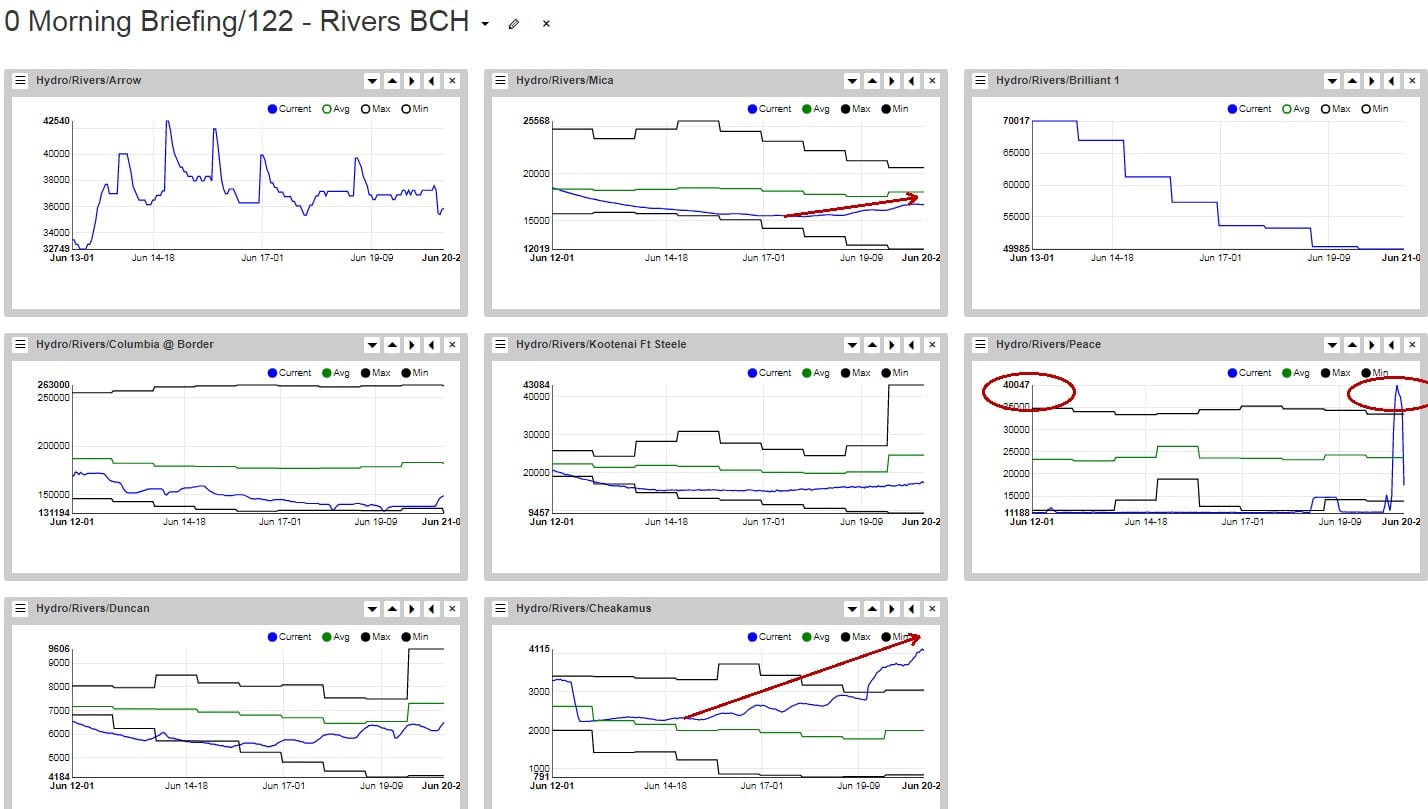 Mica rallied a bit but check out the draft on the Peace – from 10k to 40k – probably serving some Vancouver AC load. The Cheakamus is rallying, not sure why. 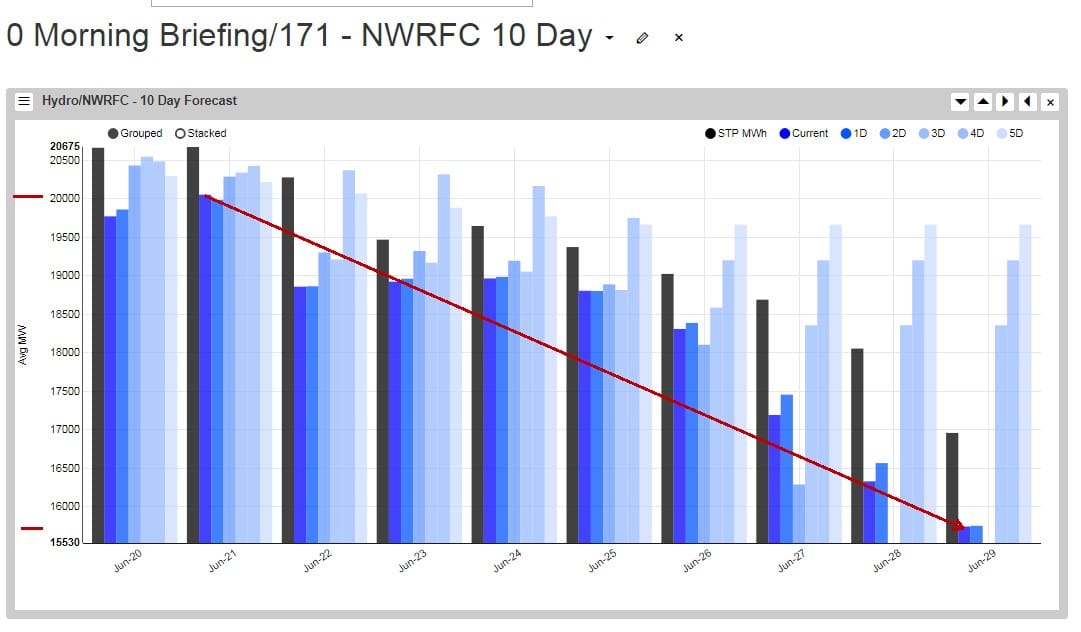 Finally, let us conclude with a report provided by our friends at the NWRFC. In this report, we compare the STP’s forecast with the 10-day. Generally, the 10-day is tighter than Monday’s STP, a sign of ever-tightening water. But more interesting is the total drop from June 21 to June 29 – nearly 5000 aMW of water equivalents. Talk about tightening! Some of this is to get the refill back on track; the rest is just tight water. 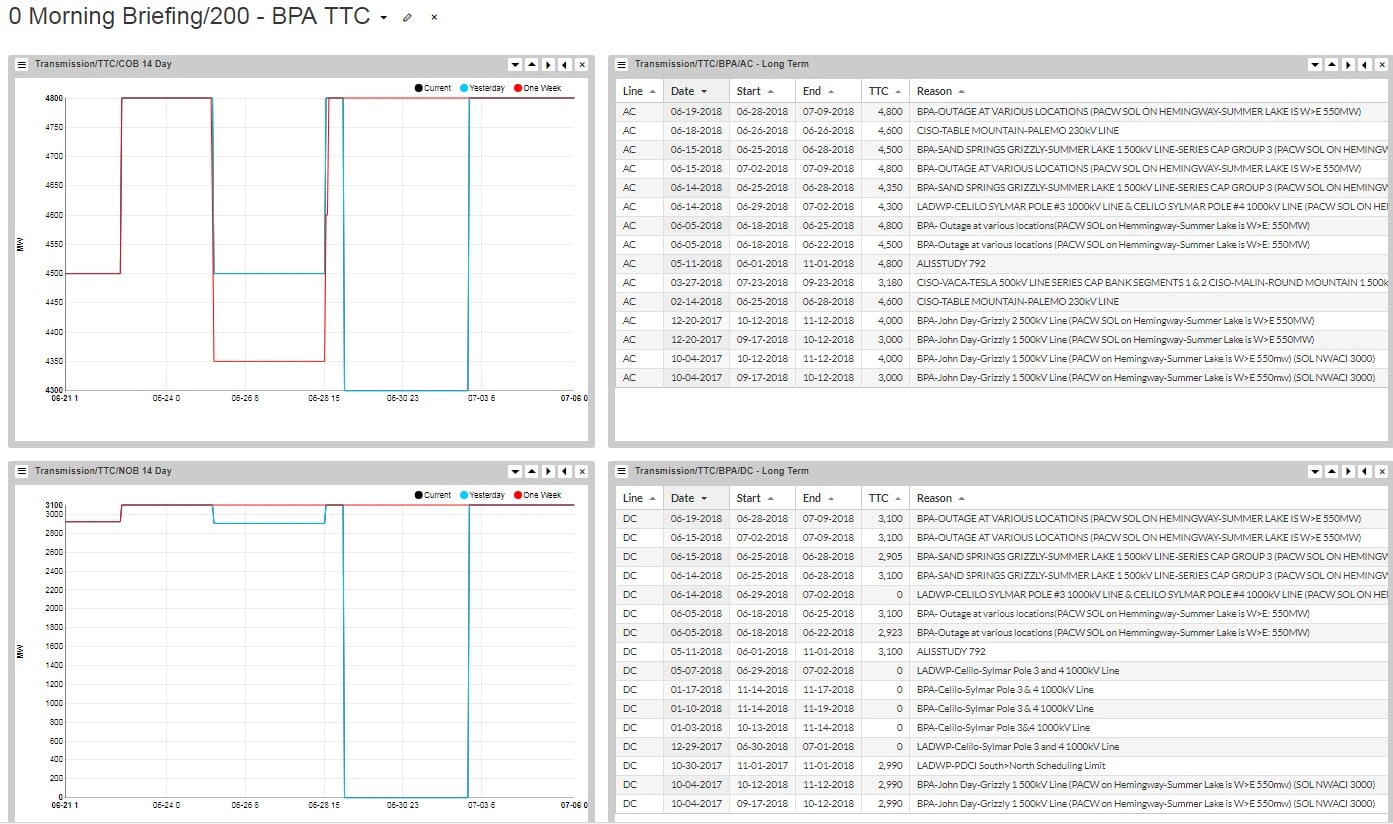 No material changes in BPA’s TTC from last Monday.

The Northwest received about 500 aMW of energy from Canada over the last couple of days, the DC was more full than not, and the rest of the lines behaved as expected.

Perhaps we don’t understand the rules of the ISO, but this virtuals report struck us as odd:

For seven straight days, HE20-22, at both SP and Palo, cleared higher in the DA than HA. Further, the average DA-HA spread was over $20 across all three hours. Six out of seven days cleared the same at NP.  HA averaged a higher clear at all four points for HE09-12.

At best, the weather outlook is normal, Water is growing ever tighter in the Northwest and is already tight in the ISO. We all wait patiently for the first test of 2018, but there are no signs of that test as of this writing. For now, buy HE20-22 DA and sell the same HA.