Two critical developments will dramatically change how power is generated, used, and priced. Both of these trends are already impacting WECC (and every other region in the USA), but their impacts will grow exponentially. Let’s explore both independently than see how they might interact with one another.

There are as many schools of thought on how much-distributed generation will come online as there are cases to run. Ansergy believes the number will be substantial for a couple of reasons.

– The price of solar panels is in a free-fall. China just canceled 20,000 MWs of solar thereby flooding the market with panels.

“Chinese and international project developers are putting their orders on hold as modules get cheaper,” Yali Jiang, an analyst at Bloomberg New Energy Finance, said in a research note Tuesday. By the end of the year, she expects module prices will slide to 24 cents a watt, down 35 percent from 37 cents at the end of 2017.”

That is just the start, the price of solar panels will follow flat-screen televisions and become “too cheap to meter.”

The payback on equipment is now under three years for most WECC states:

In California, it is under two years given that state’s high retail rates and solid solar factors.  These payback rates assume a $0.35/watt rate on panels and include full batteries. One significant change we see coming is the size of home solar is growing. Where in the old world they built out to meet a kwh subsidy cap, with batteries installed the buildout will match a 24-hour energy demand resulting in larger configs.

Who can afford a Tesla, right? Pretty soon, everyone will not only be able to purchase an electric vehicle they will have no choice but own one  The driver will be costs of batteries which are poised to follow PV panels down into the depths of cheapness.

“Batteries’ costs are generally measured by how much it costs to store a kilowatt-hour of energy. Form Energy is developing battery technology that could cost as little as $10 per kWh – the cheapest batteries today are about $200 per kWh…” –

But EVs increase load, right? Yes, they do, but they also are moving batteries which can help shape renewable energy into the hours most needed. And there will be a lot of shaping required.

Ansergy has developed several EV and DistGen scenarios. Here is a summary of changes in Demand for one case: 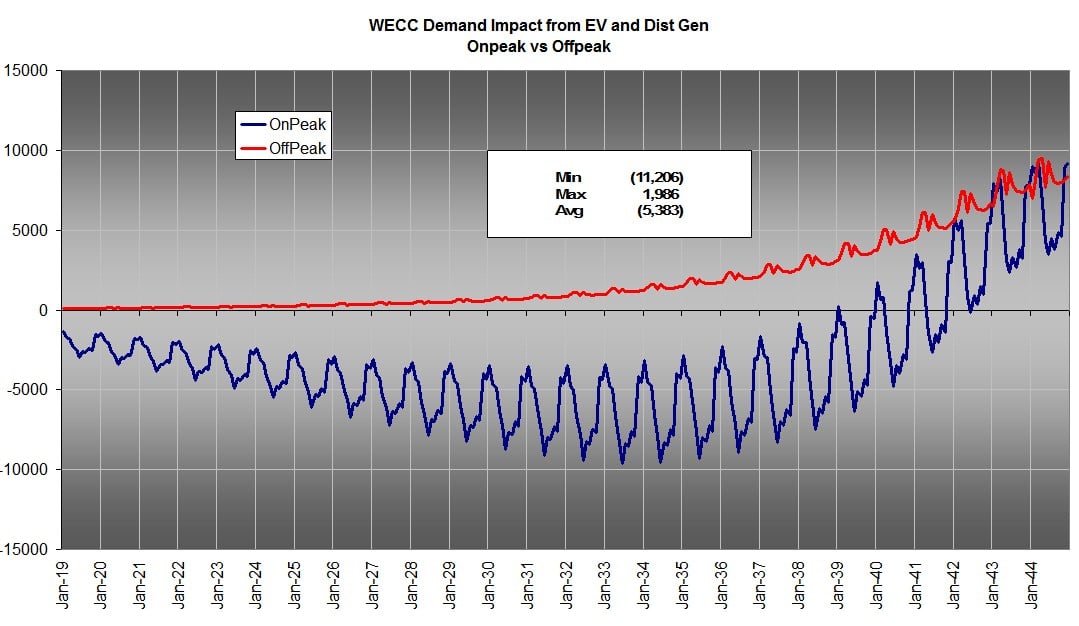 This case assumes a fully developed dist-gen by the mid-30s and complete conversion (95%) to EVs by 2045. The chart plots the change in demand (before EV and DistGen – Demand net of DistGen and EV) traditional Heavy Load (HL – HE07-22) versus Light Load (non HL hours). The peak WECC delta is 11,000 MWs and occurs around 2035.

Another way of looking at the same change is to toss out the old HL/LL grouping and look at the Solar Peak hours (11-14) versus the Ramp Out of Solar (19-22). 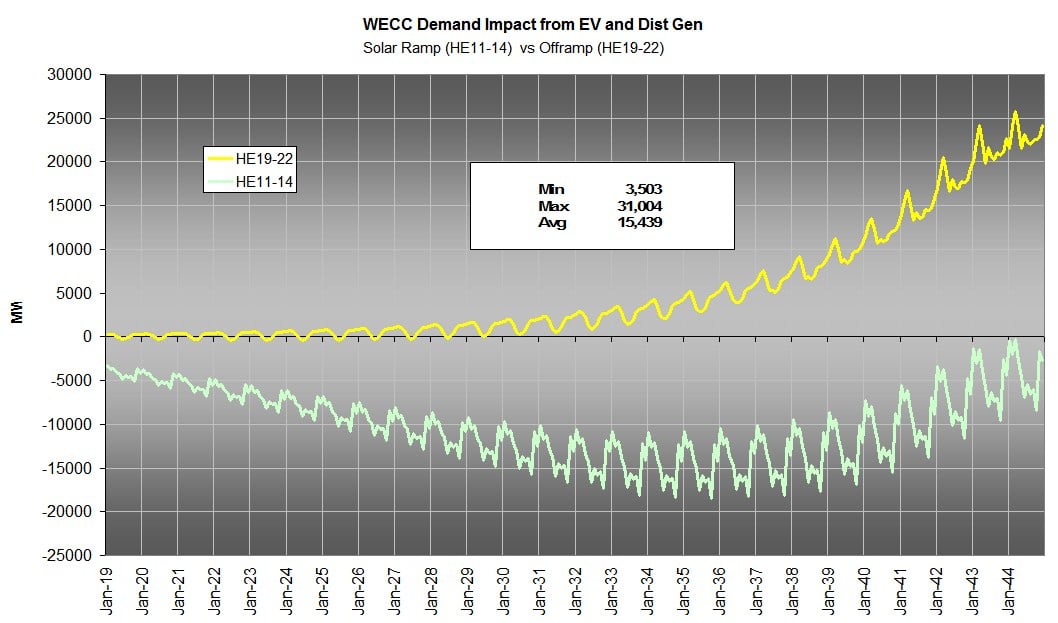 And now things get even more interesting as the net change peaks at 31,000 MWs, or about 30% of WECC’s loads.  The WECC is in for a wild ride and the HL|LL spreads are due for an overall tightening. But it will be the intra-day spreads that will experience the most significant volatility, at least until all the EVs are used as capacity resources.

All of our demand forecasts are available at a utility level. If you would like to learn more about Ansergy’s 25-year forecast products, please drop us a note.