A robust DA LMP market at SP15, even at NP15, driven off of warm, not hot, temperatures. The Northwest grows tighter by the day, driven by declining flows, not temperatures – those remain chilly, well below average. 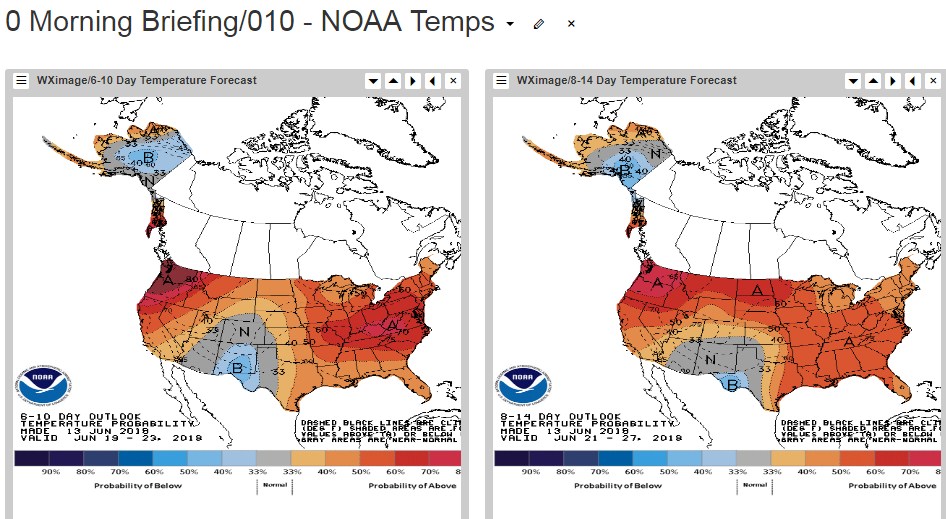 That brief heat is quickly displaced by a material cool-down in the southwest and spills into Socal. The Northwest looks to warm up and will bring a sharp rally in the hub’s loads – where else could they go, loads are at yearly lows now.

$40 handle LMPs and 12k heat rates – those are levels that match where Prompt is trading: 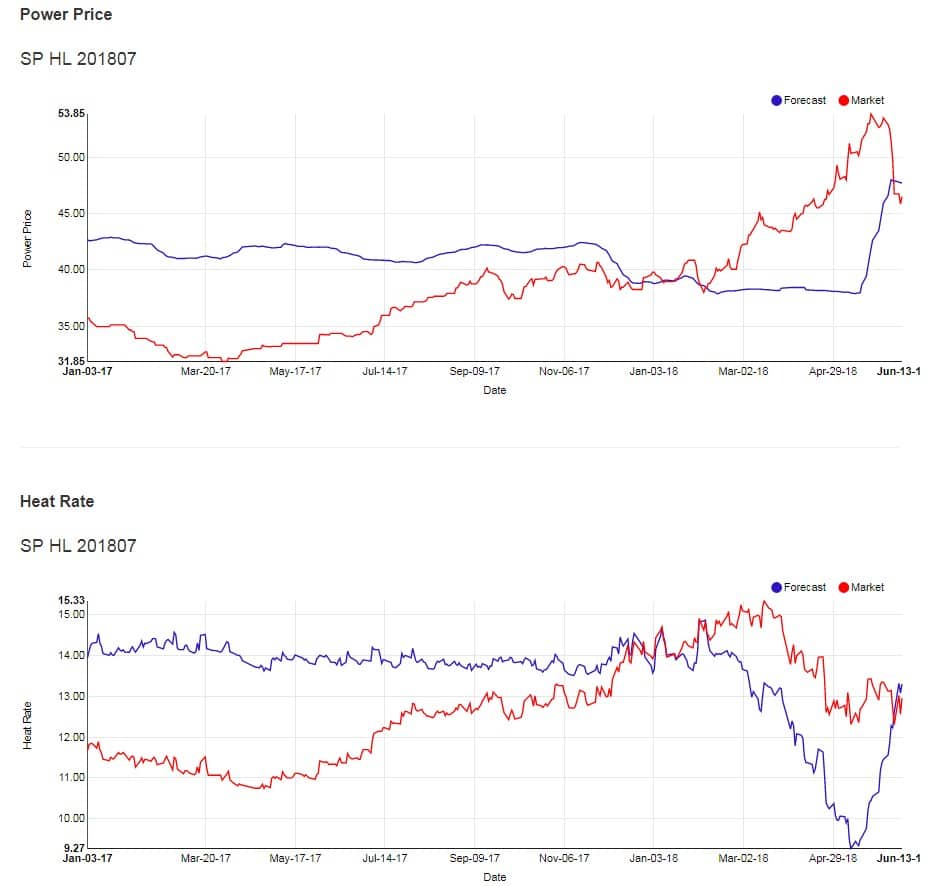 Length at these new levels, post-meltdown (driven jointly by declining Socal Citygate and eroding confidence in a hot summer), grows ever more attractive, though we’d be wary of the cold WECC that is coming next week.  Those 12k DA heat rates will be swapped out for 8k next week when Prompt is but ten days away. Unless the back-end of the forecast grows real hot, the prompt may be set for further selling.

Maybe Socal Citygate rallies? It just did in cash, though only a modest $0.50 on the hottest day of this year: 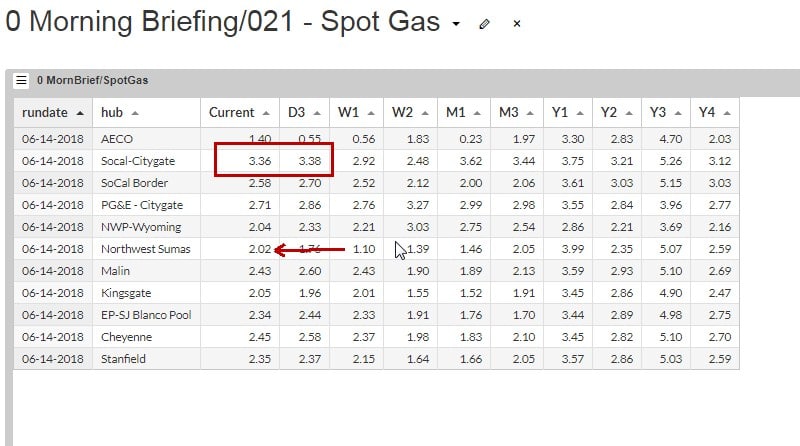 A nice bullish move, right? Not really, not when LA is heading towards the low 70s for a handful of days, and Prompt gas remains a tall dandelion with the lawn mower heading its way. 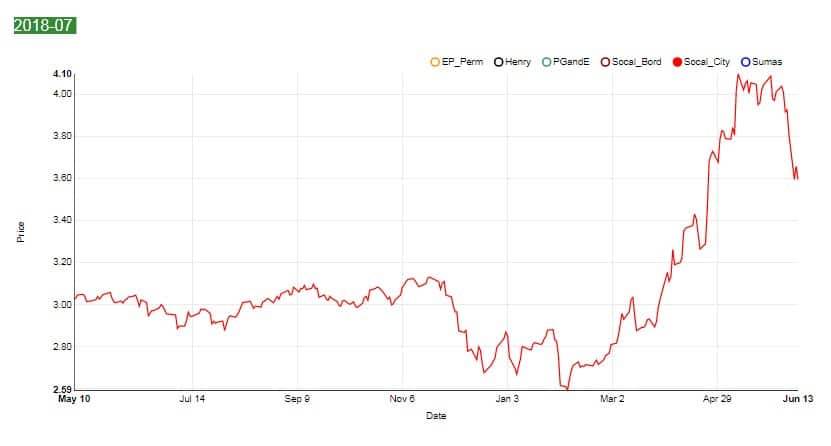 Sure, it sold off $0.50 in a week, that is impressive, but is there more to come? Well, if next week clears mid 2s, where we see SCG dailies going, then yes, there is more room to come off. All of that changes with a baking hot Socal forecast but, alas, we don’t see that. 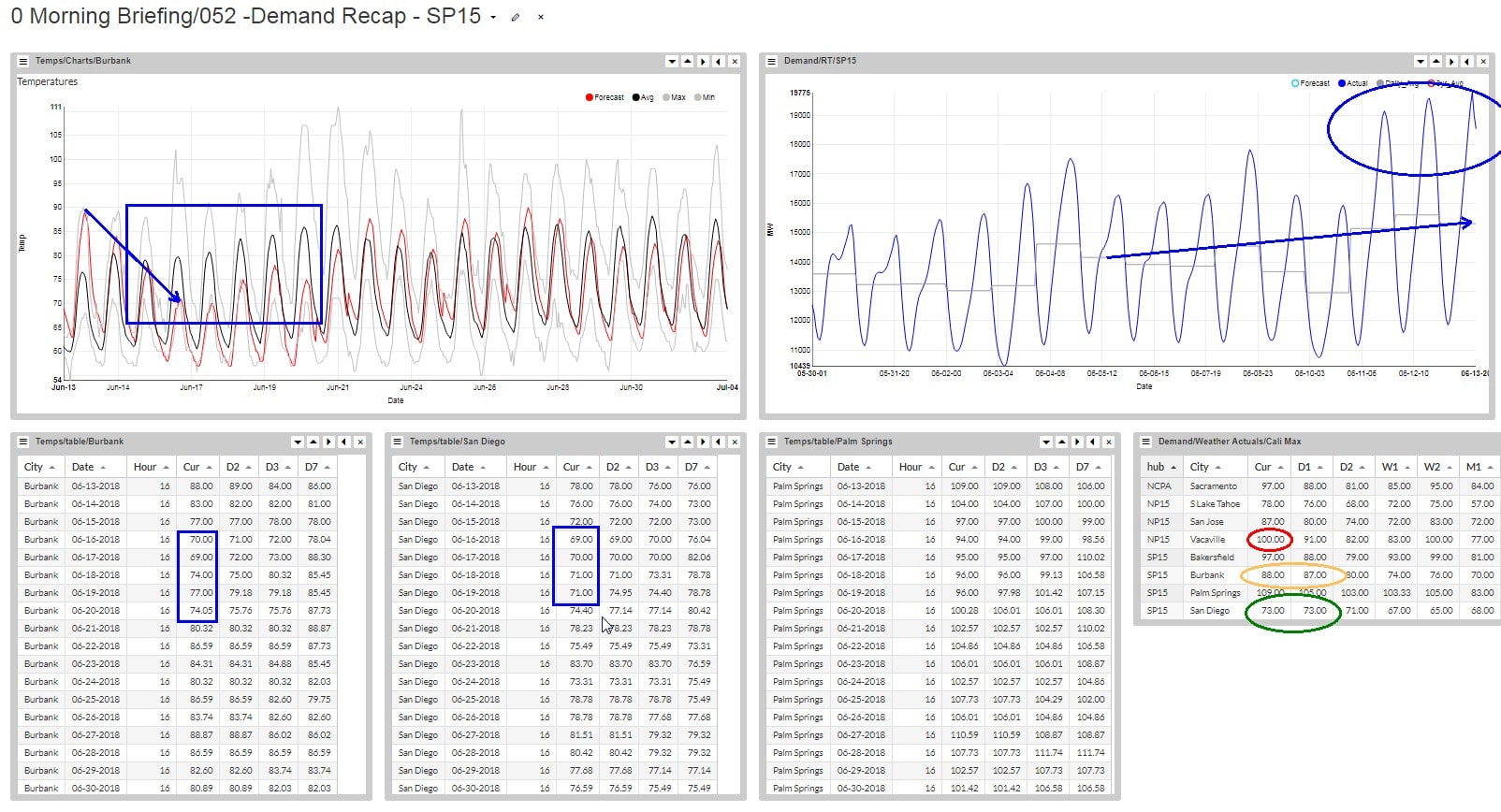 We see temperatures plunging, dropping 20 degrees and staying in those depths for five days. Beyond the ten day, we see just climo. But at least you enjoyed some fireworks, check out the load rallies. Also, check out those 100s at Bakersfield and high 80s in Burbank and … and… mid-70s in San Diego. Hah. Without SD roasting it’s hard to get SP boasting.

The same story at PV, Phoenix is plunging (temperature and loads). Interesting that Phoenix is projected to be colder than LV – don’t see that very often. 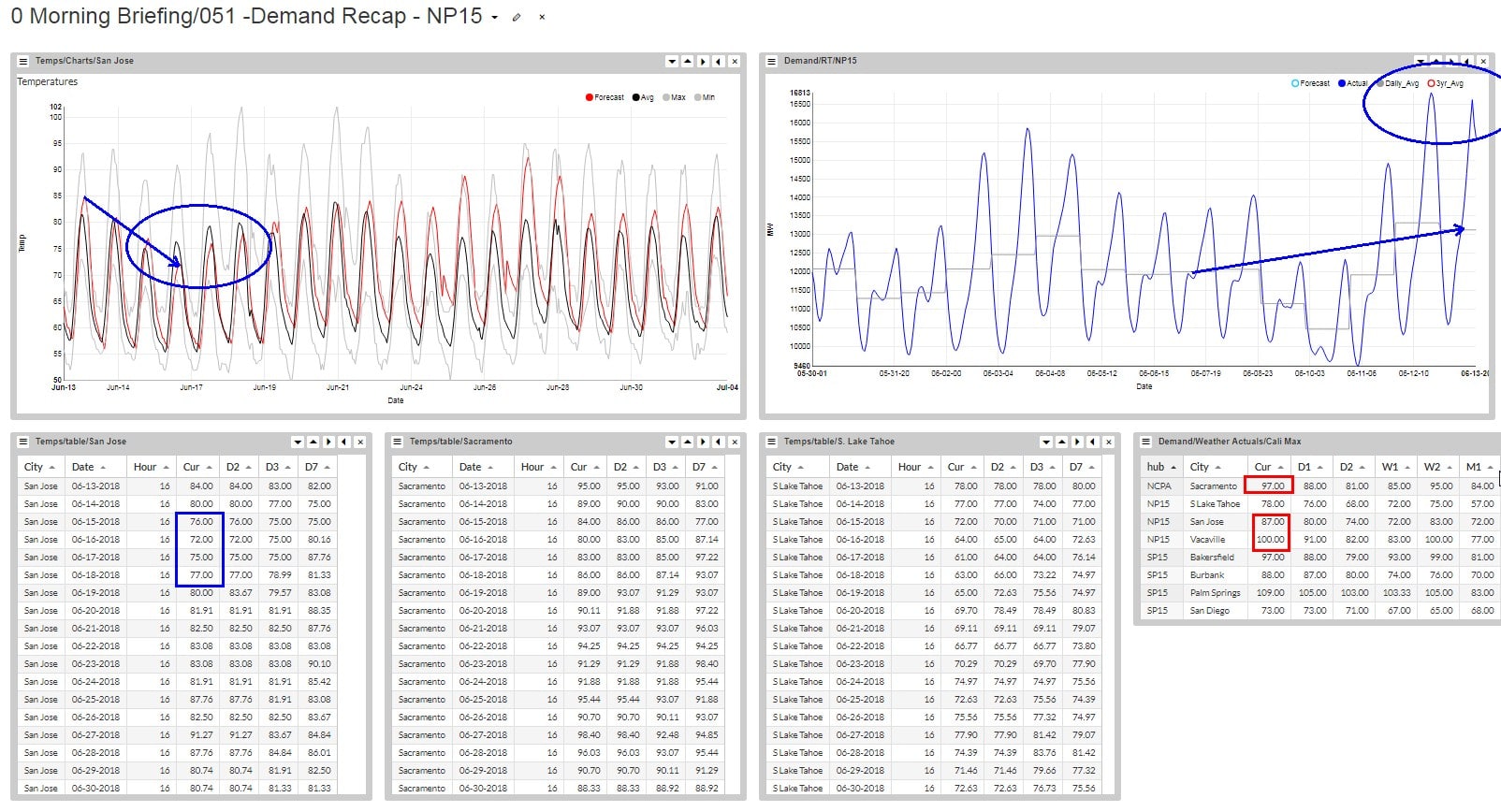 Big load moves at NP15, but like SP, next week cools down with no heat in the near horizon. Those big load moves were served by NP’s gas units, its power noms soared: 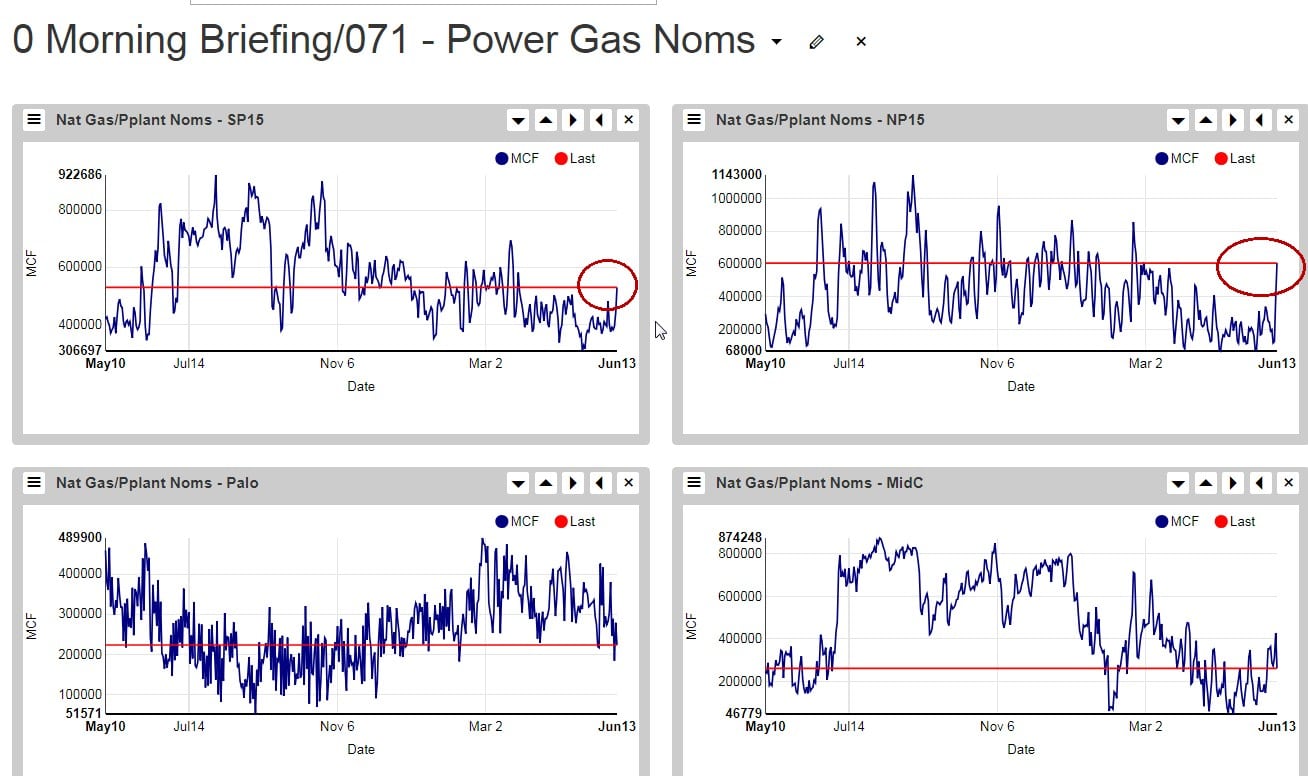 And will plunge next week. 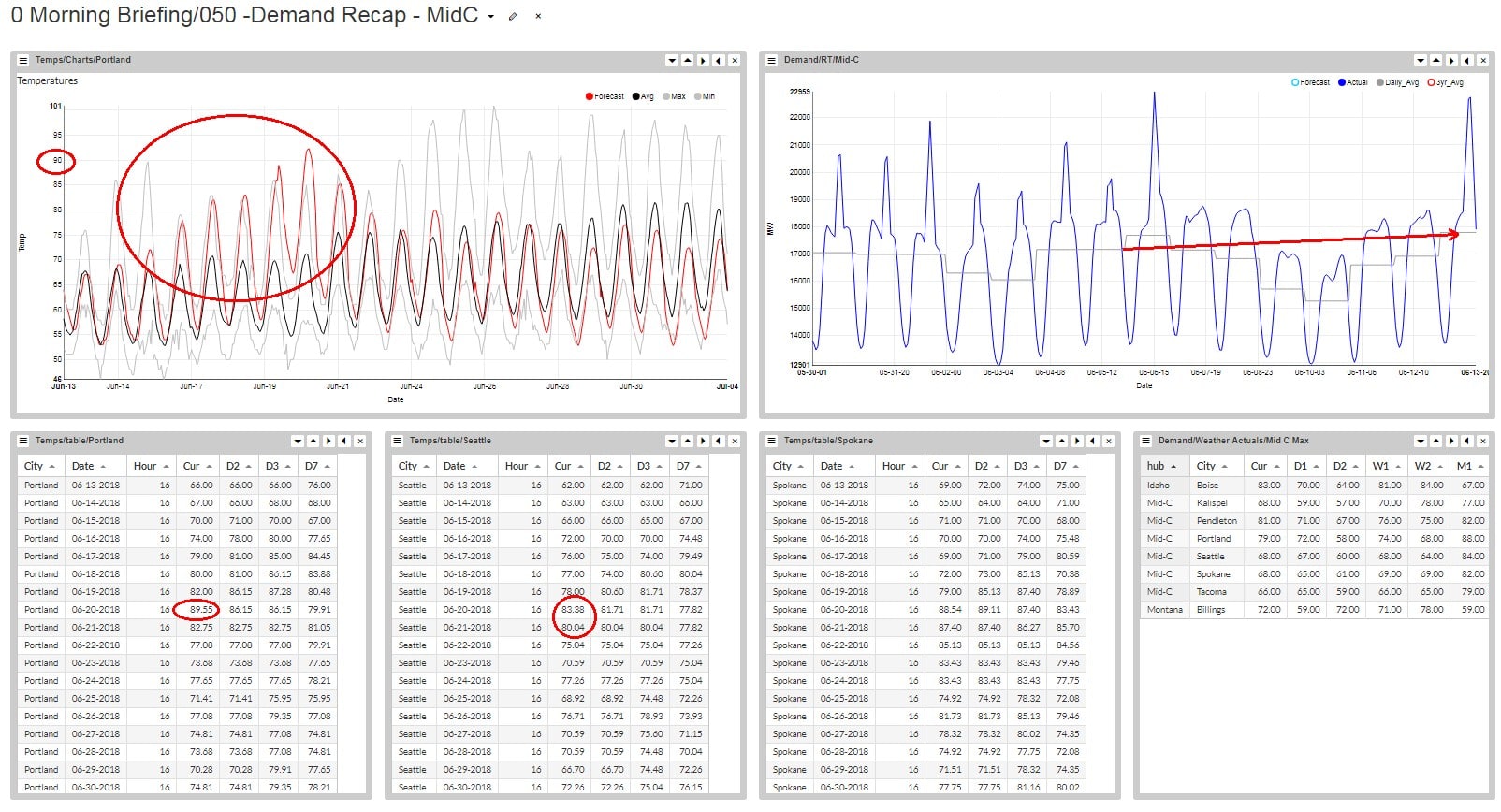 Its a tale of four hubs; three are heading to the doghouse and one is waltzing to the ball. The Northwest will enjoy its first hot spell of the year which takes place while the hub’s hydro is tanking. Might make for some exciting cash spreads and possibly tighten up term spreads, maybe.

We mentioned the power noms; there wasn’t much to say about them aside from NP15 doubling its gas burn. Probably more telling was how little they did move given that yesterday was perhaps the hottest ISO day of 2018. Adding fuel to the bear’s fire, renewables were near a low: 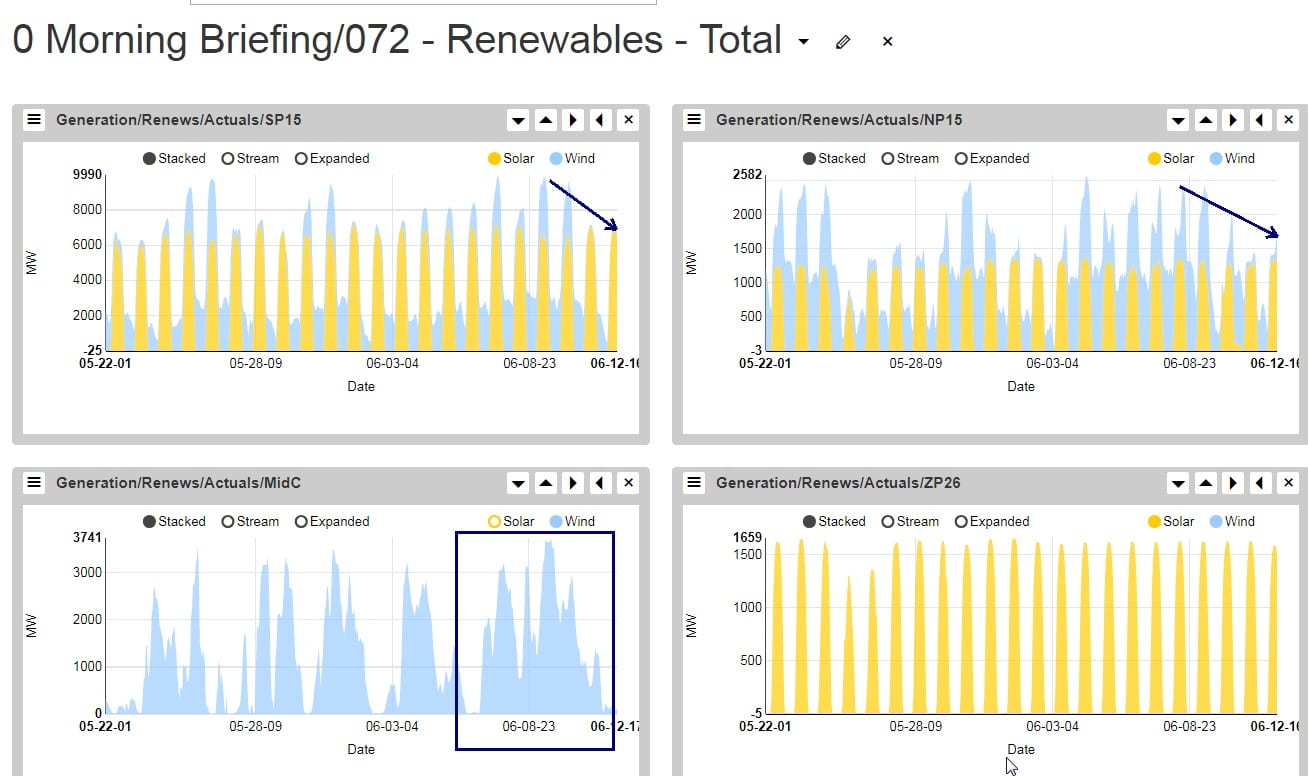 Both NP and SP saw their wind generation drop to zero, or close, while the Northwest had a blustery two days and generated across all hours. 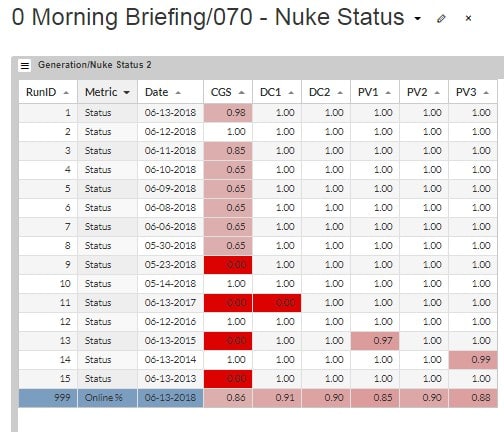 And, if you are looking for a demarcation of the water year, look no further than CGS – it’s back. BPA no longer needs to manipulate HL; tight water will keep gas on the MidC margin from now until next spring. And that water grows ever tighter….

The pond sits at 1280.5 feet, just 7-9 feet left to fill her up. BPA just yawns and mumbles “so what.” But actually, with inflows collapsing, filling the rest won’t be quite as easy as they might think. Perhaps those arrogant feds will regret dumping so much water over the spill gates? Our point here is that they have two weeks to do it, so plenty of time, but declining inflows just makes it that much harder. 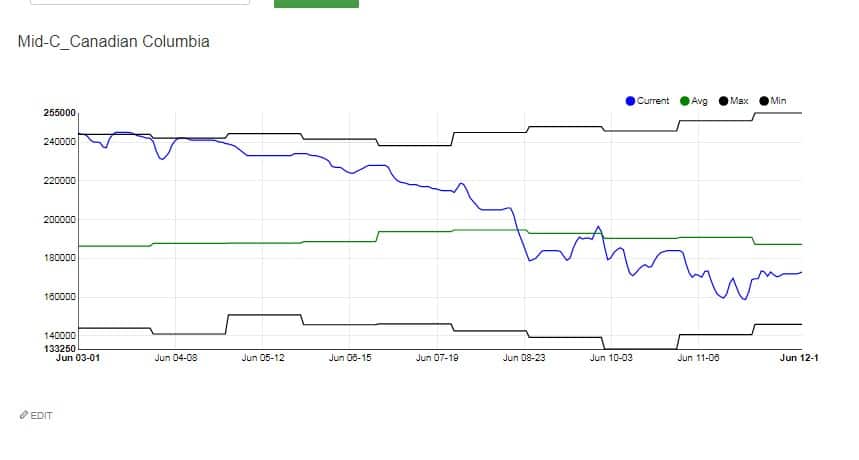 Another red line crossed – Inflows to Coulee are now below average, having forded that Rubicon last weekend, and the trend is sloping down. 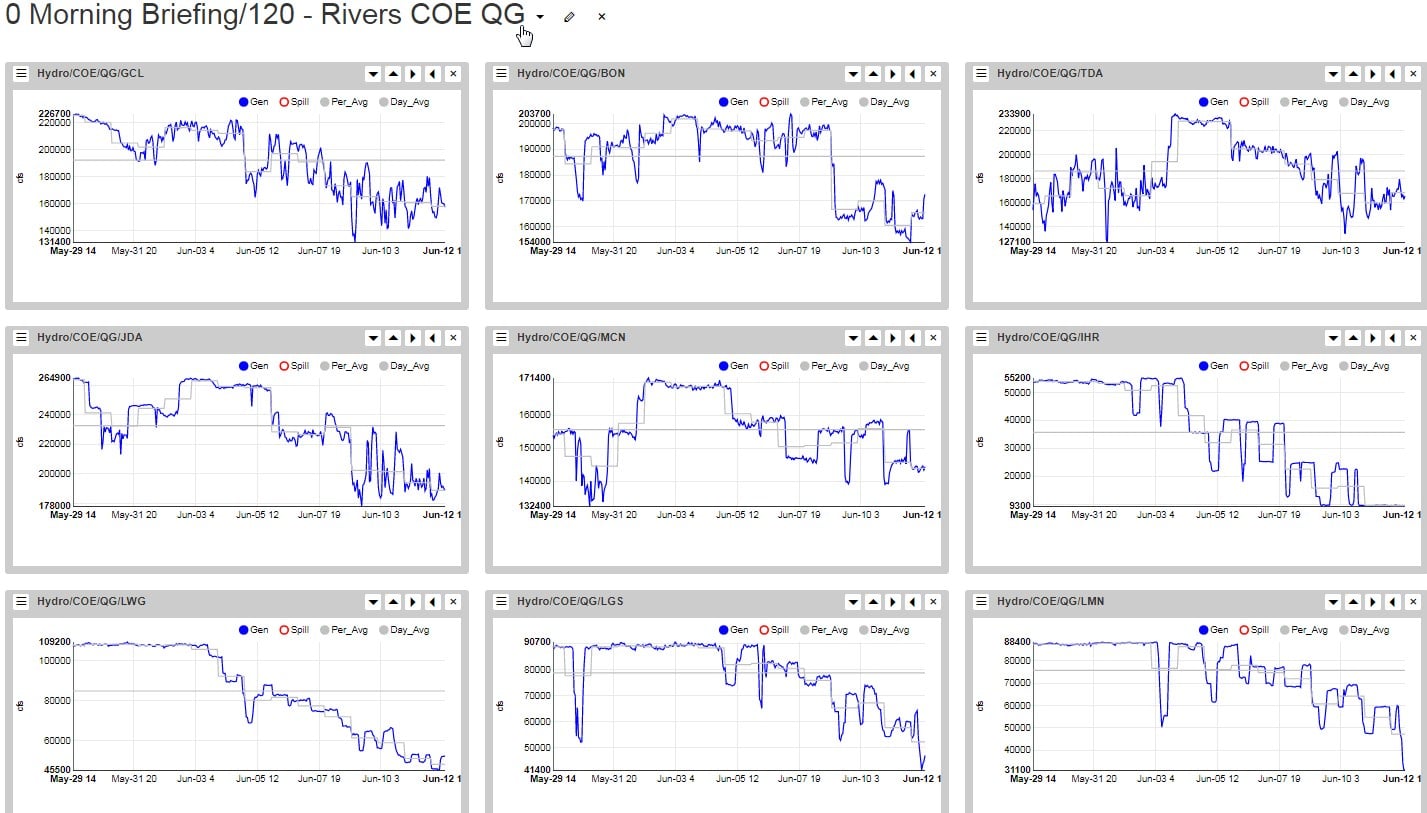 Another sign of the declining melt is the collapse of generation across both the Snake and Columbia mainstems. BPA can’t cut spill; those levels are now at the minimum required to save the salmon, all cuts now come out of “QG.” All of these developments are occurring right before the first heat event. Oh Boy. 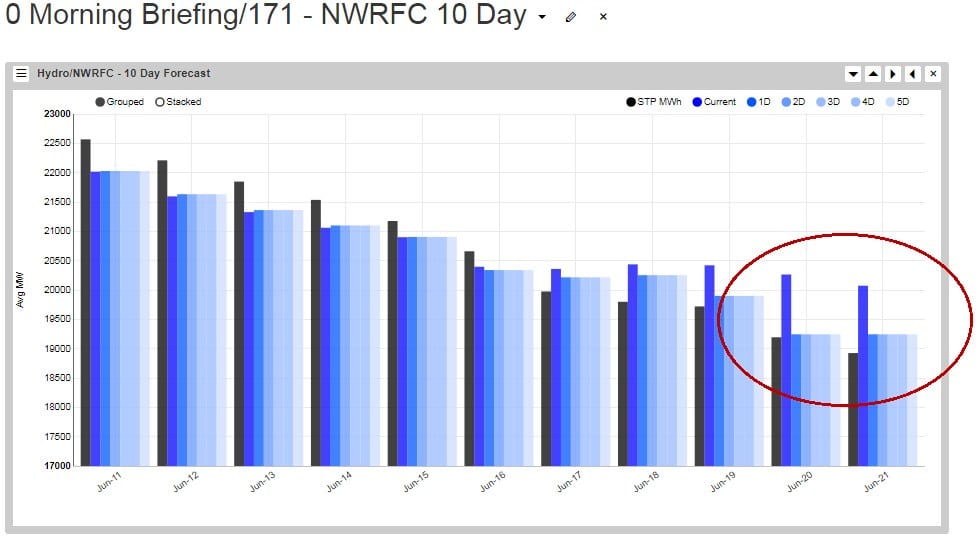 And the RFC’s ten-day keeps backing down from the STP – until it doesn’t. Wow, where did those rallies in days 8-10 come from? We think those may reflect the reality of an additional 5k of load the Northwest will be serving when Portland hits the 90s and Seattle high 80s. 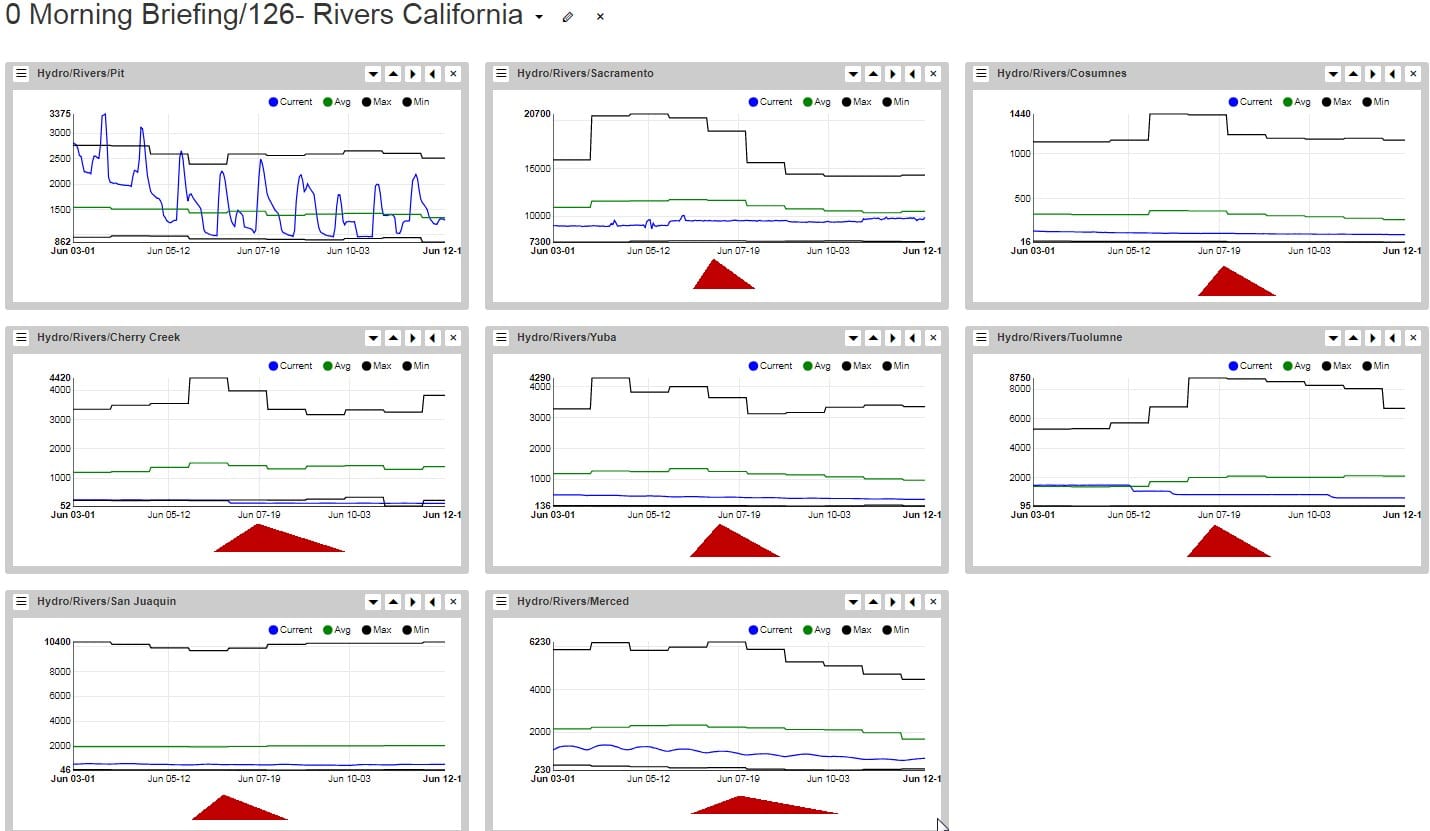 Final parting hydro thought. The plots above are California streams; the red triangles reflect those rivers below normal. All of them are below normal, except the Pit which is NPs load following resource. Hydro is tight in the ISO, should it ever warm up. They have reservoir bullets, but we doubt those ponds are aggressively drafted to serve load or cap price. Water is too scarce of a resource in the Golden State.

Speaking of the Golden State, it seems Kalistan is thinking about breaking up and become Socal, Nocal, and Cal. We think it would be easier for all of us power folks if they renamed “Cal” to ZP26 because the proposed new state boundaries pretty much match the tranny grid. I hope it passes, would make the whole area more Kalistan-like.

The Northern Intertie was a seller than it wasn’t. Nothing else interesting.

We want to buy SP Q3 but fear next week’s cash and its potential impact on the strips, but wouldn’t hold it against anyone for buying the dips. While the south sheds degree days, the Northwest rallies amidst declining inflows. A bullish recipe for MidC? We doubt it; you need all hubs strong to break out and with the price-setting south tanking don’t count on the MidC setting price. BC is poised to pounce upon any sign of bullishness; the south certainly won’t need any of MidC’s energy. Nah, that MidC heat will probably be a price headfake.