The selloff at the end of last week has driven the Q3 SP heat rate to one-year lows:

You could argue the price last year, on July 7, was still artificially depressed from the Feb 17 selloff. Now we are back to those levels. Palo also sold off, but not to the same degree:

Palo merely wiped out four months of hype, not twelve, and probably is closer to fair value than not — except for the dearth of significant heat, and there is none of that on anyone’s near horizon. 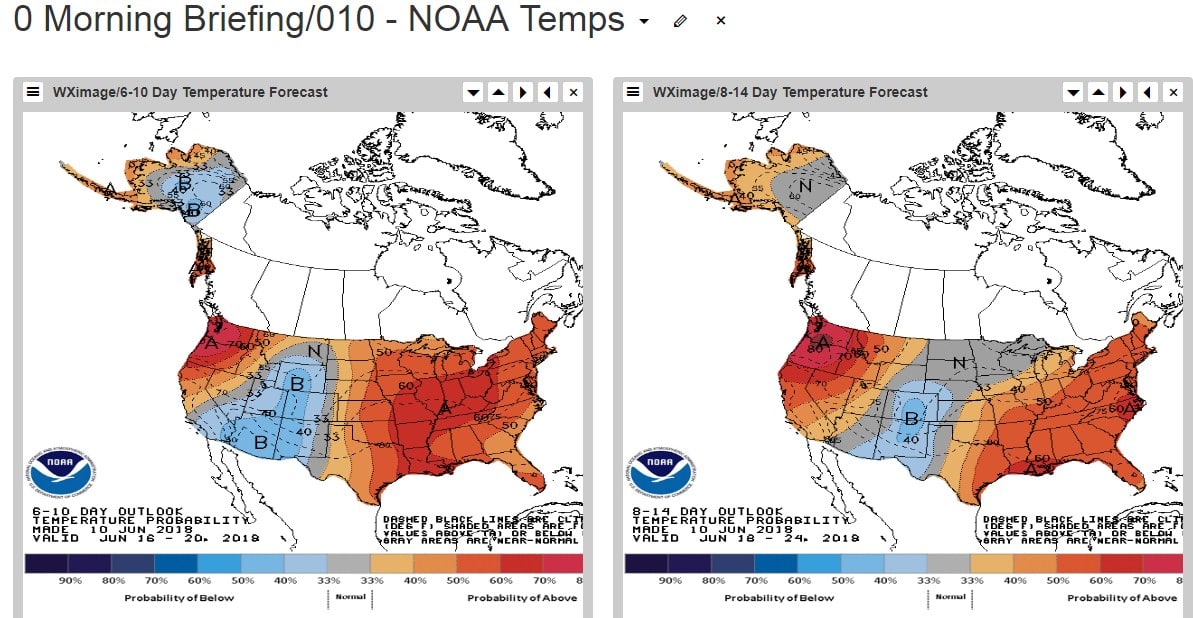 Blue in the land of Red – whatever happened to Summer? Well, for one thing, it isn’t summer, it is still Spring, and we are confident it will eventually arrive and confident it won’t show up for at least ten days.

The ISO Day Ahead market sharply rallied yesterday for today:

In Saturday’s market it seemed the end of the world actually ended, but then the forces of collusion stepped in and sent shivers of joy down the long’s spine, but we’d suggest that is more of a head fake than a paradigm shift or even a reflection of anything bullish. Sure, temps pop for a couple of days in SP – Burbank bakes in the mid-80s – then party over. 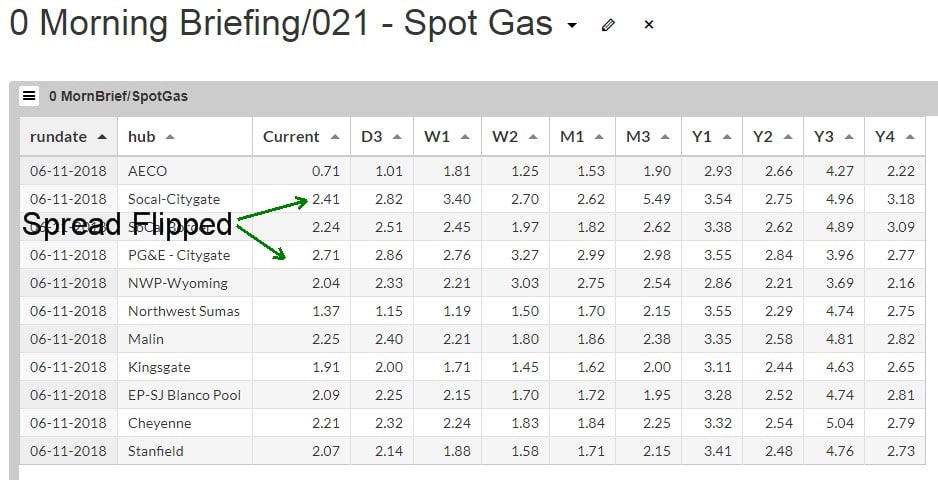 Speaking of parties ending, that Socal Citygate Lovefest has turned ugly, seems no one likes the position, which is also why the power tanked last week – the summer Citygate suffered some selling.

Not that we disagree with the move, in fact, we think it is underdone and needs to give back at least half of the May 8 rally. On that day, May 8, according to separate studies recently released by the Southern California Gas Company (SoCalGas) and the Aliso Canyon Technical Assessment Group, the sky on summer Citygate officially fell. Both suggested a strong possibility of summer curtailments which the greedy traders construed to mean $20/mmbtu summer cash, at least for a few days. And proceeded to drive the entire SCG strip to the levels we saw as of last Wednesday – then reality arrived.

Two studies, two conclusions that were identical…hhmmm. Seems that if I wanted to recover the full capacity of my govt-constrained asset, I’d hype the extreme case. I’d also make sure my guys were writing the studies. I’d say these two studies were not independent of each other; these were the same and proof is they released them on the same day. Naturally, the greedy traders bid it up and now are left holding the summer bag (we don’t disagree with the winter prices!). 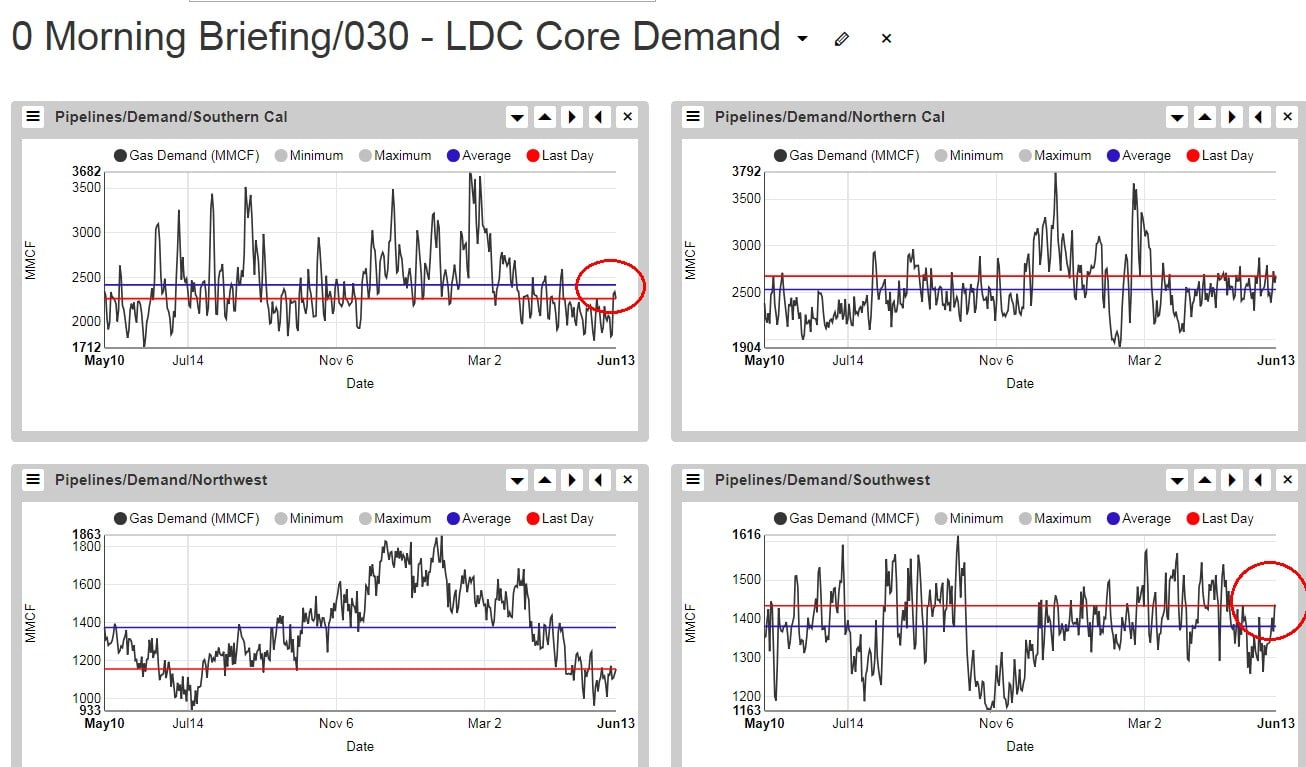 Socal system demand jumped up a slight amount, and the desert interior continues creeping up; NP and MidC are nowhere and not leaving anytime soon.

For some odd reason, Socal decided to draw gas from storage on a weak demand day – go figure. 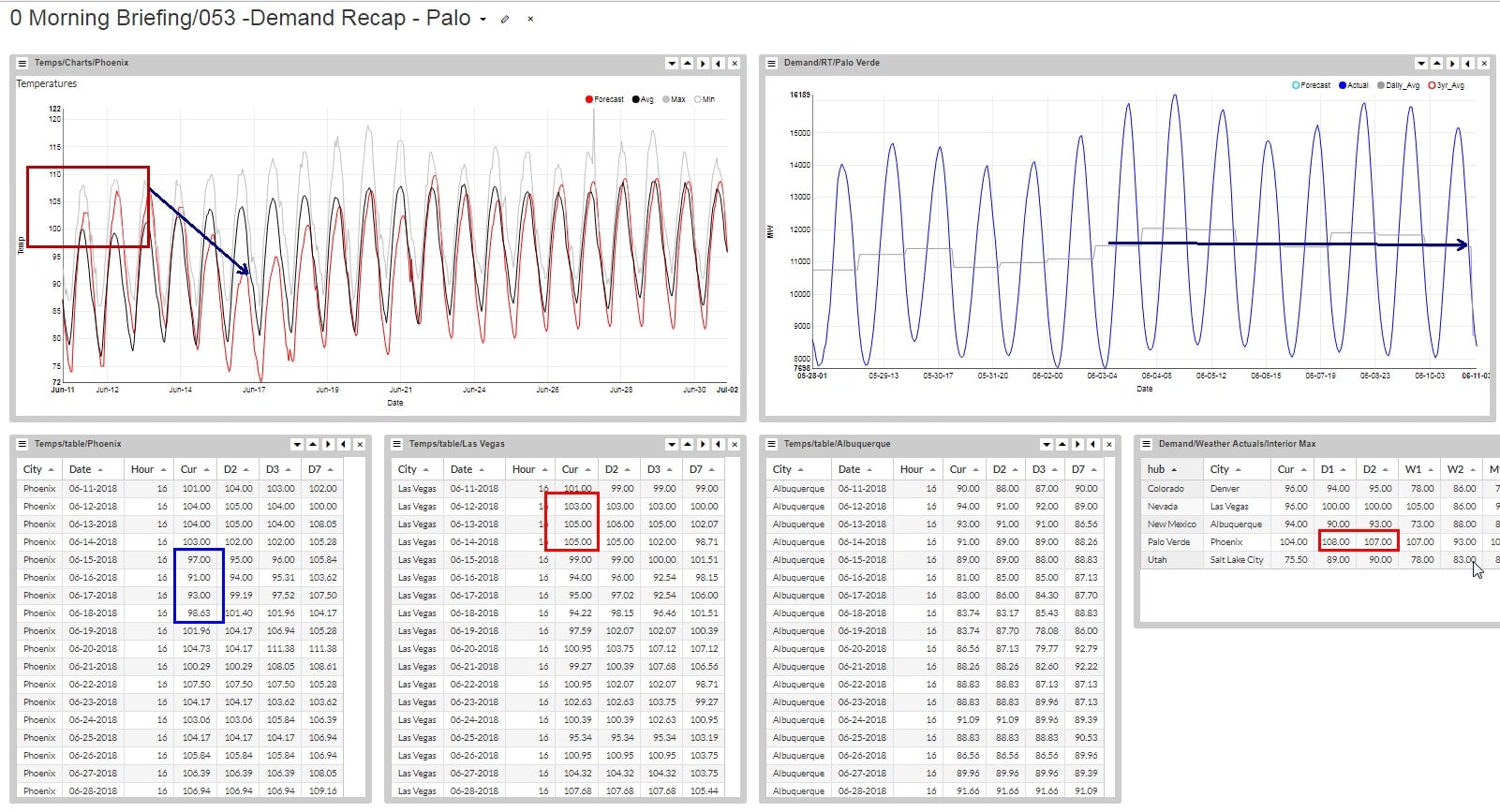 Warm through Wednesday, then dropping to the low 90s – Phoenix, that is. Loads are sideways, and we see no signs of extreme heat which takes us nearly to July. 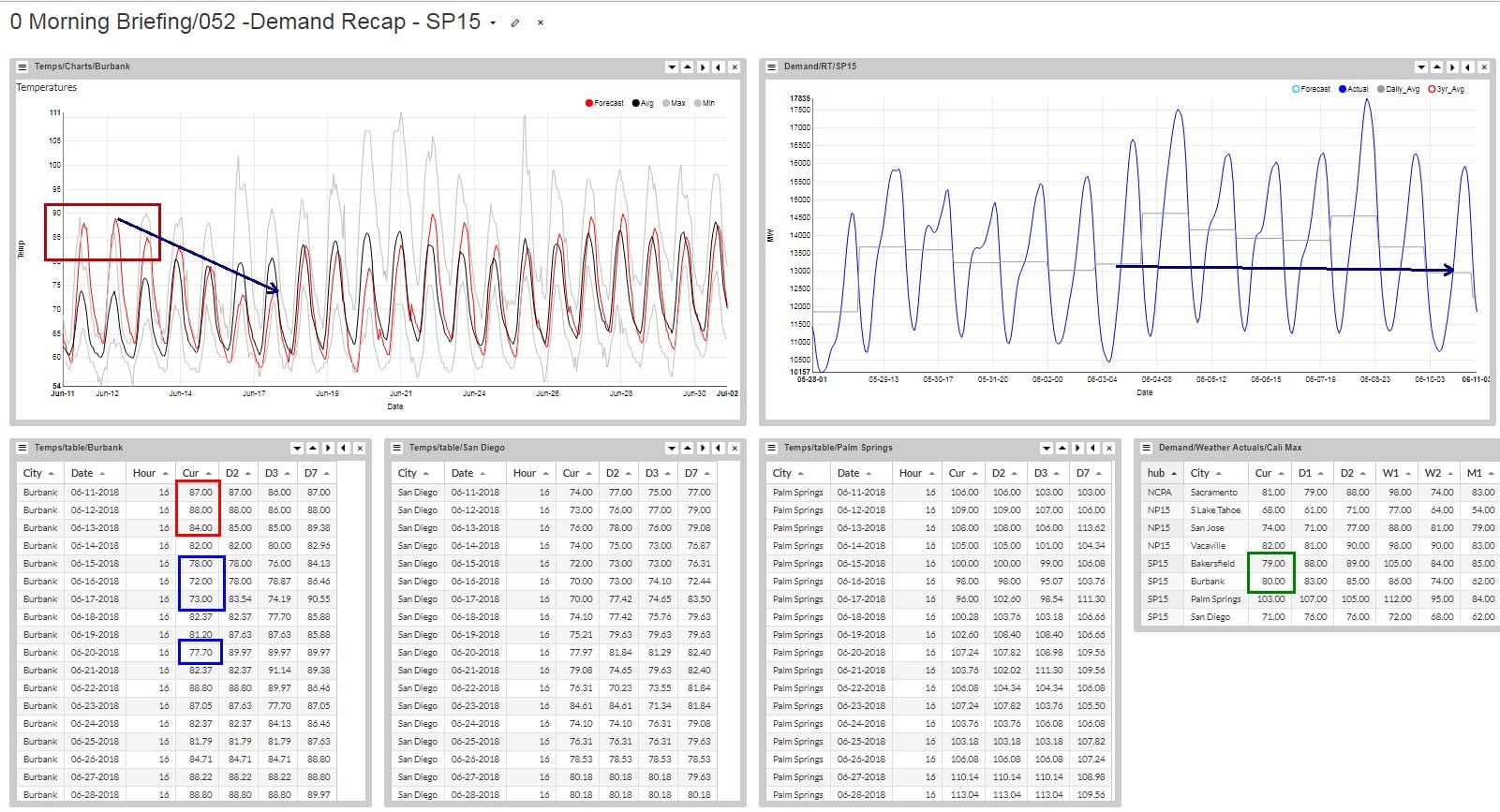 The same story at SP15, except Socal, gets colder and the cooldown lasts longer. Loads are sideways, might pop today and tomorrow off of LA 80s, but don’t hold your breath. 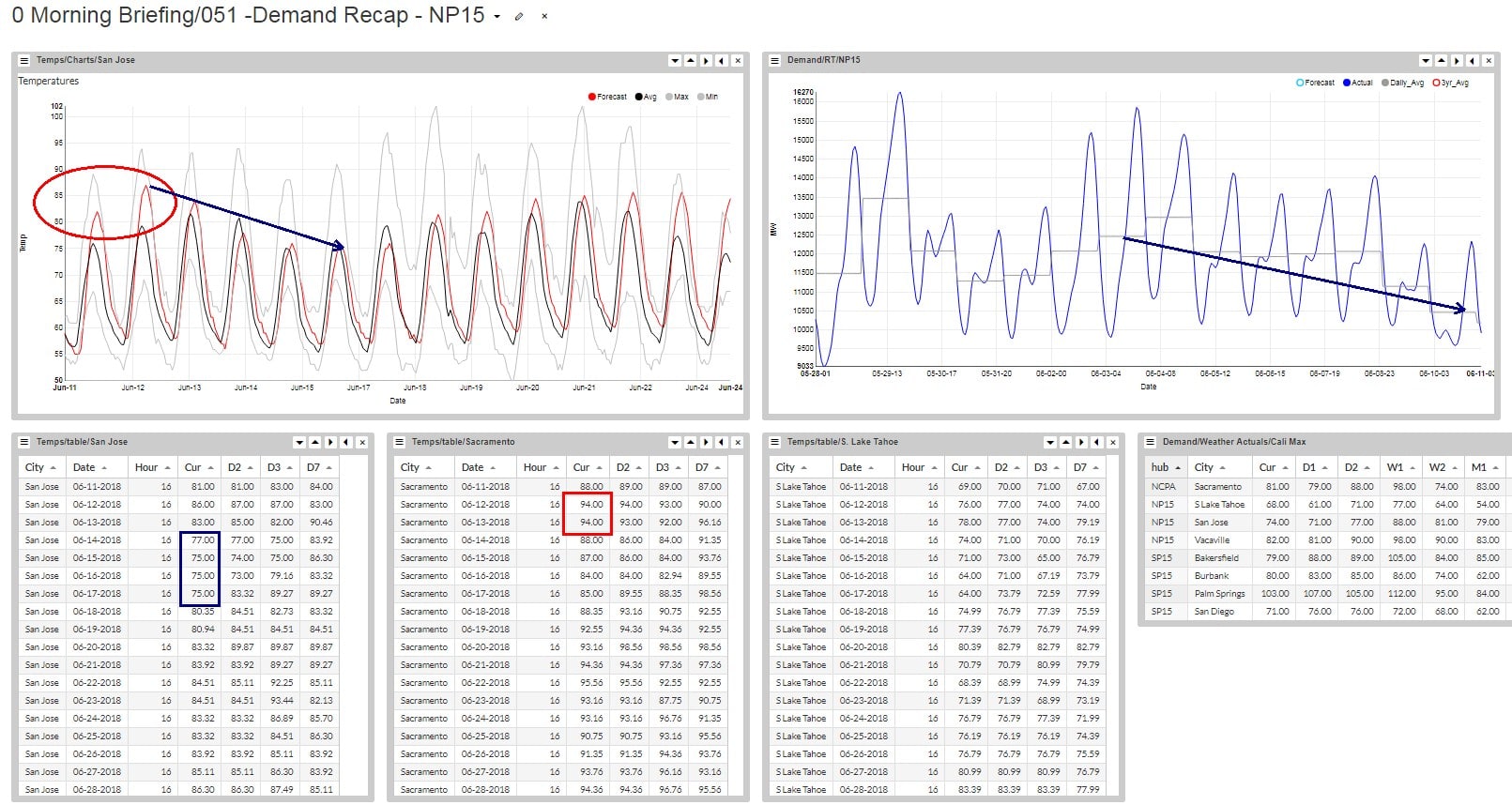 NoCal cools down faster, harder, and lasts longer than Socal, and its loads are not sideways, they tanked. 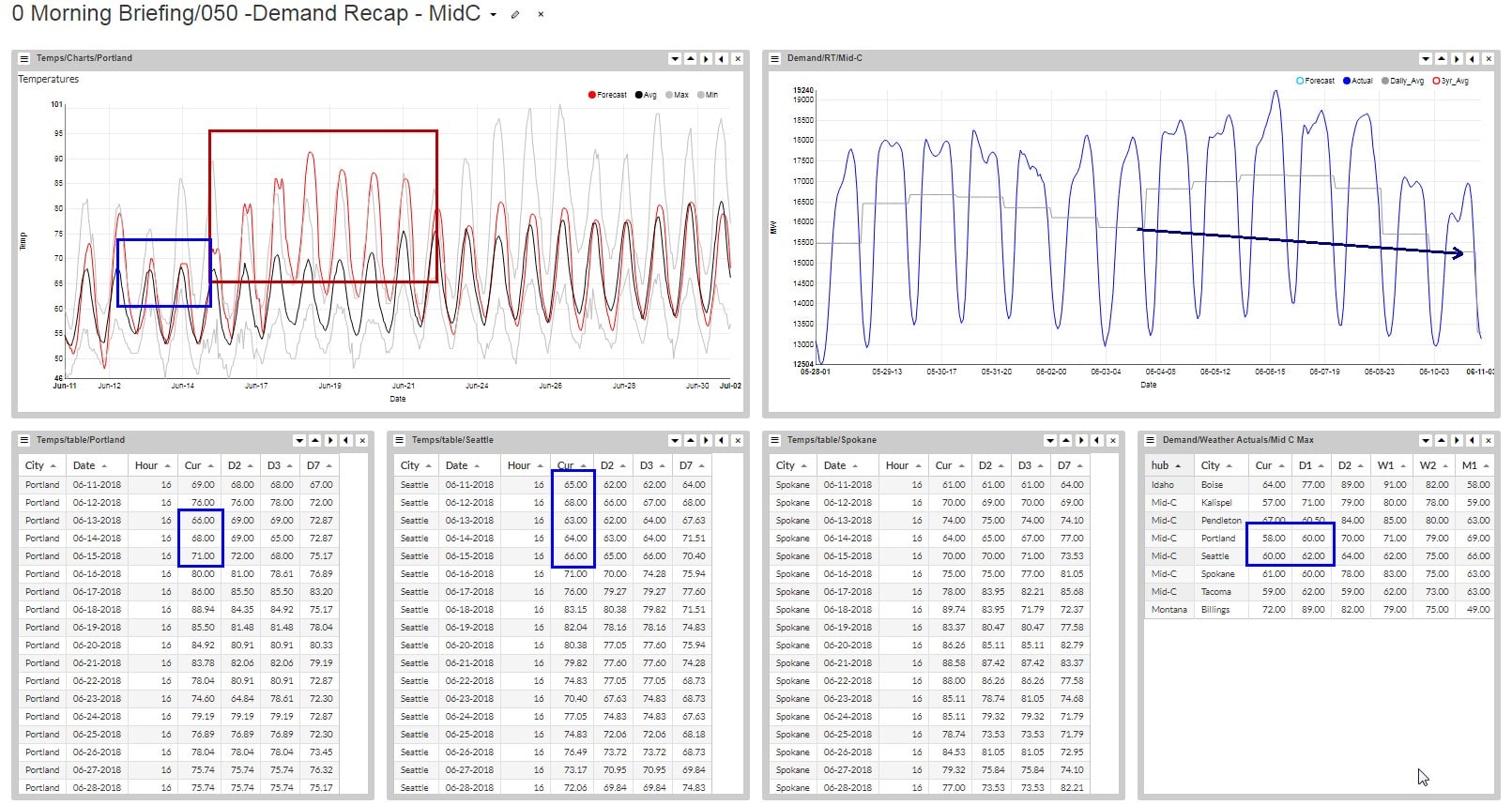 OK, here’s some action – heat in the Northwest, check out that 5-10 day outlook and those ten-degree anomalies in Portland. Heat, coupled with disappearing water, could portend for some bullish surprises in the Northwest. 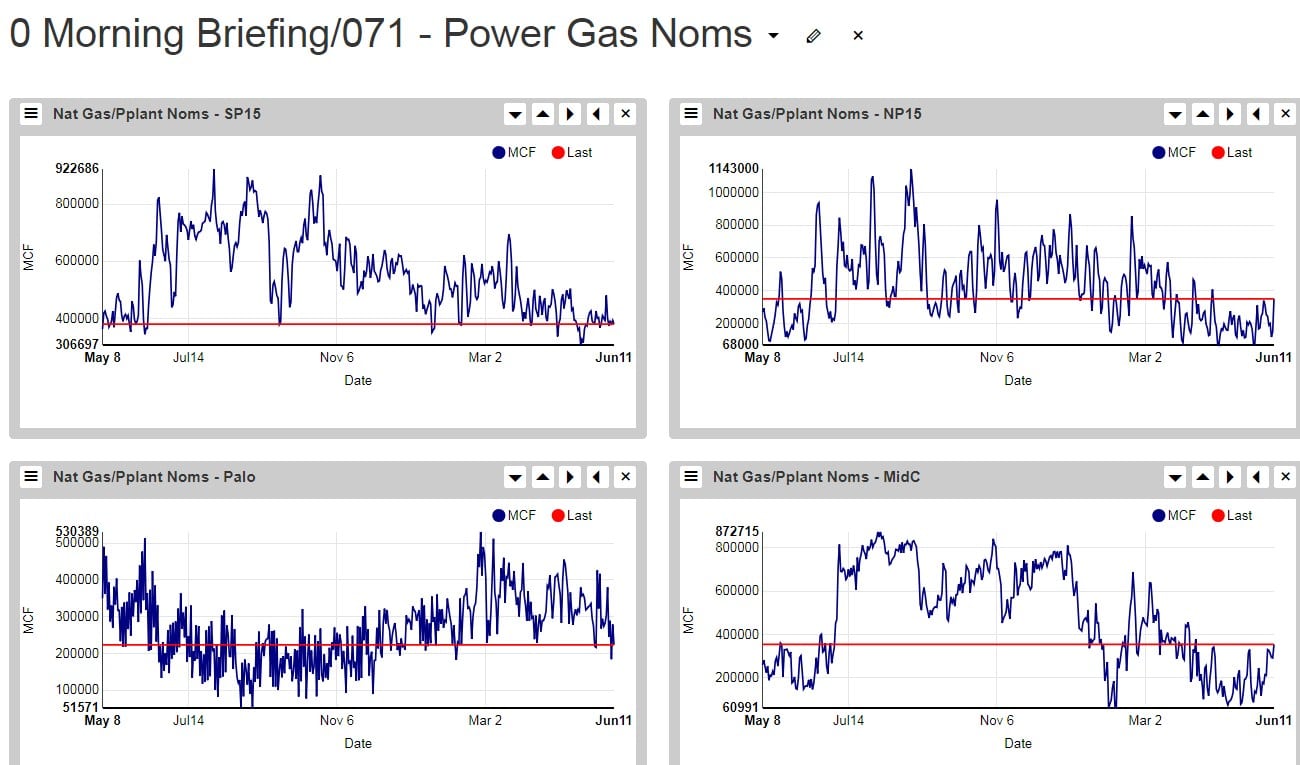 While every other hub saw its gas noms for power plants decline, the MidC saw hers rally, and it wasn’t off of loads. The Northwest is going dry, my friends, the water year is over, BPA did another masterful job at managing an incredibly volatile – and exciting – water year. I can’t wait for next year. 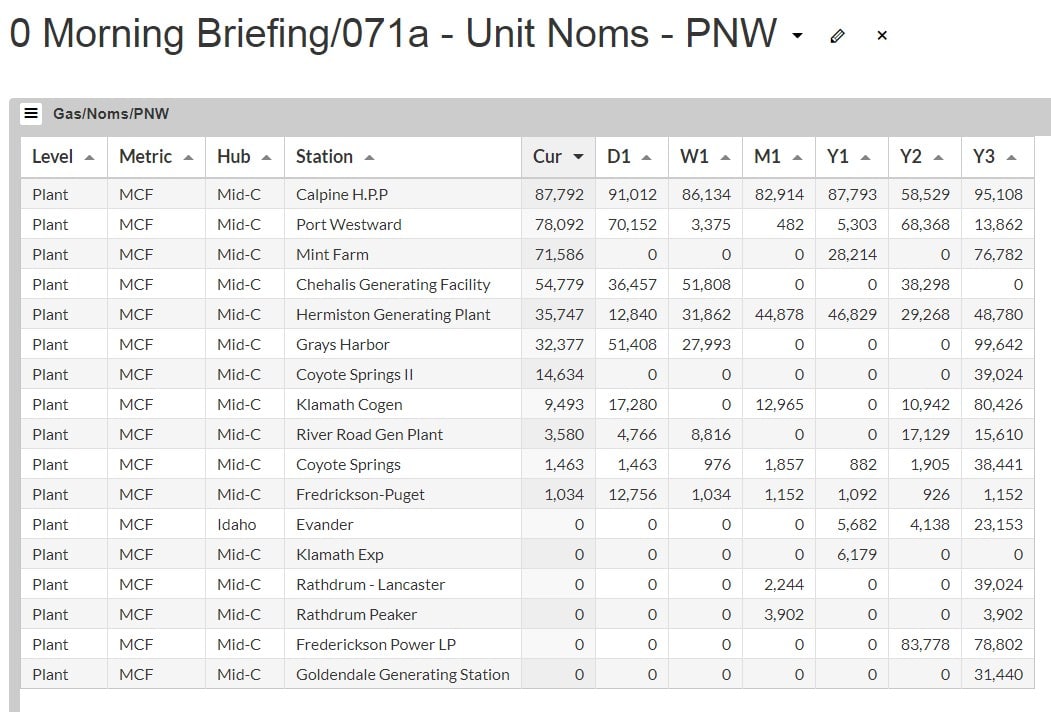 Let’s dive deeper into the MidC’s noms. We’ve seen three plants fire back up in a week, and we expect all but the peakers to be running by next Monday as much off declining inflows as rallying loads. Since BOM is already priced well above 7k heat rate it begs the question – “Does a fundamental tightening even matter?”

Despite selling off, the BOM MidC heat rate is still 16k! If I were Calpine, I’d dump all 2000 MWs this morning, locking in that 16k and most likely serve it by covering in cash. But, if need be, I can always turn on my 7k units and bank 9k. Duh – why aren’t they doing it? 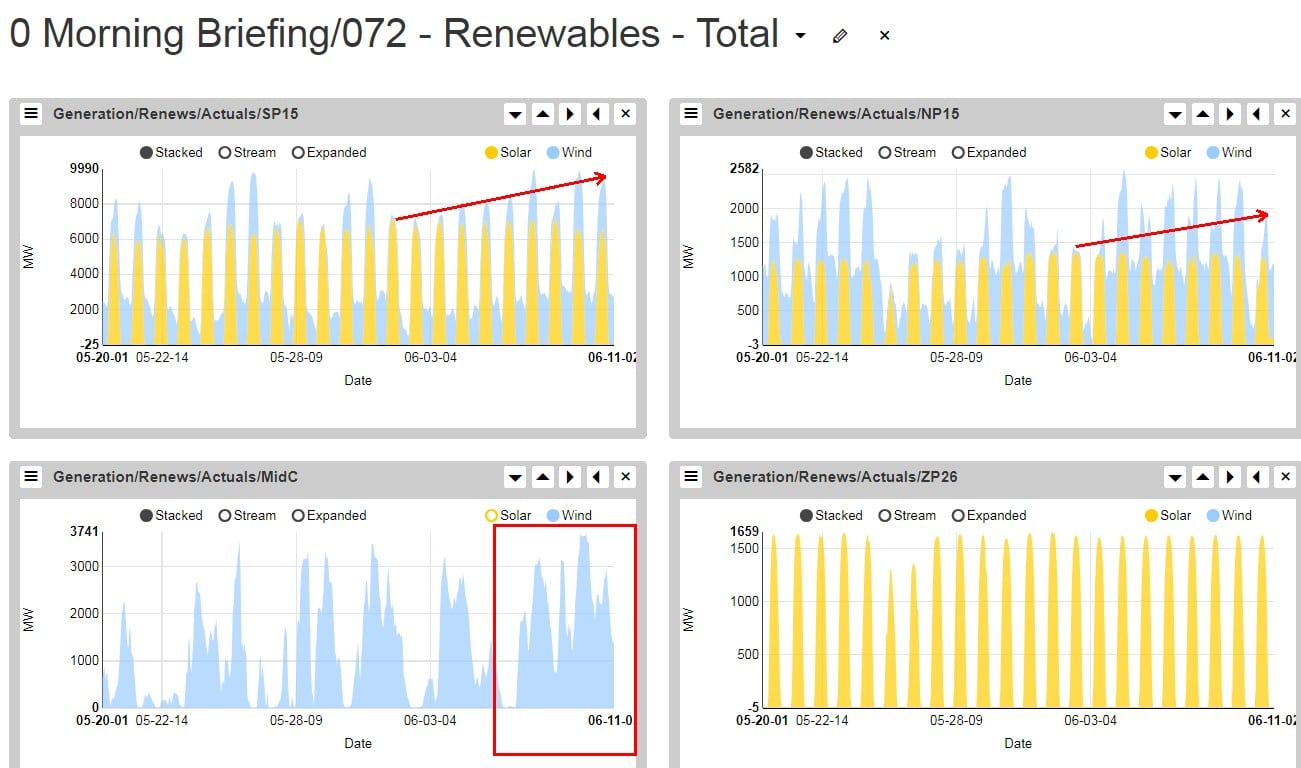 Weekend renewables were up which makes today’s SP DA price rally even more surprising, but then that traded before the HAs cleared:

And if it hadn’t been for HE 21 clearing $90s the day would have been a disaster. Eight straight hours cleared below $ zero. 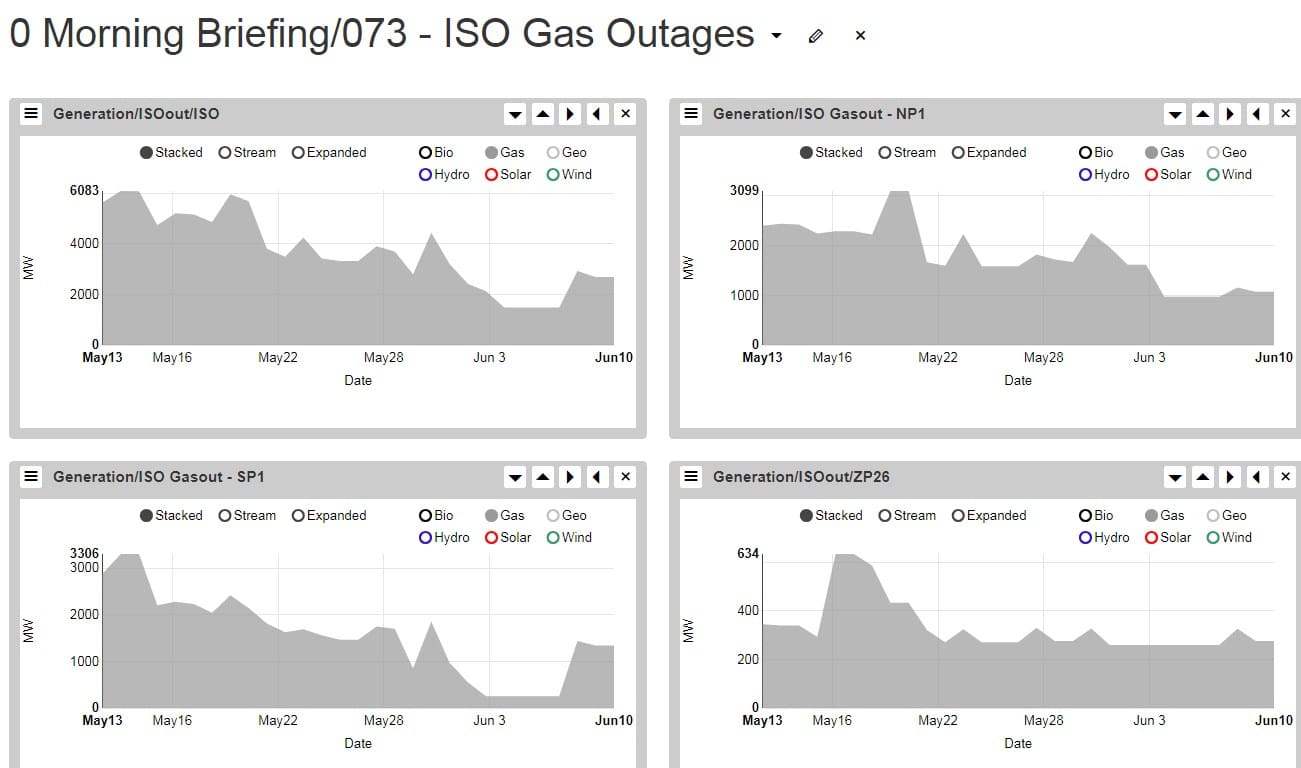 We mentioned last week that SP gas outages set a five-year low, that record is over, a few new units tripped inside the hub:

The reservoir is 8-10 feet from functionally full; they could do that in a few days with still strong inflows. Inflows would have been even stronger, but BPA decided to add four feet to Lake Pend Oreille:

Not sure where that came from, but four feet they did add which crushed the Pend Oreille flows. 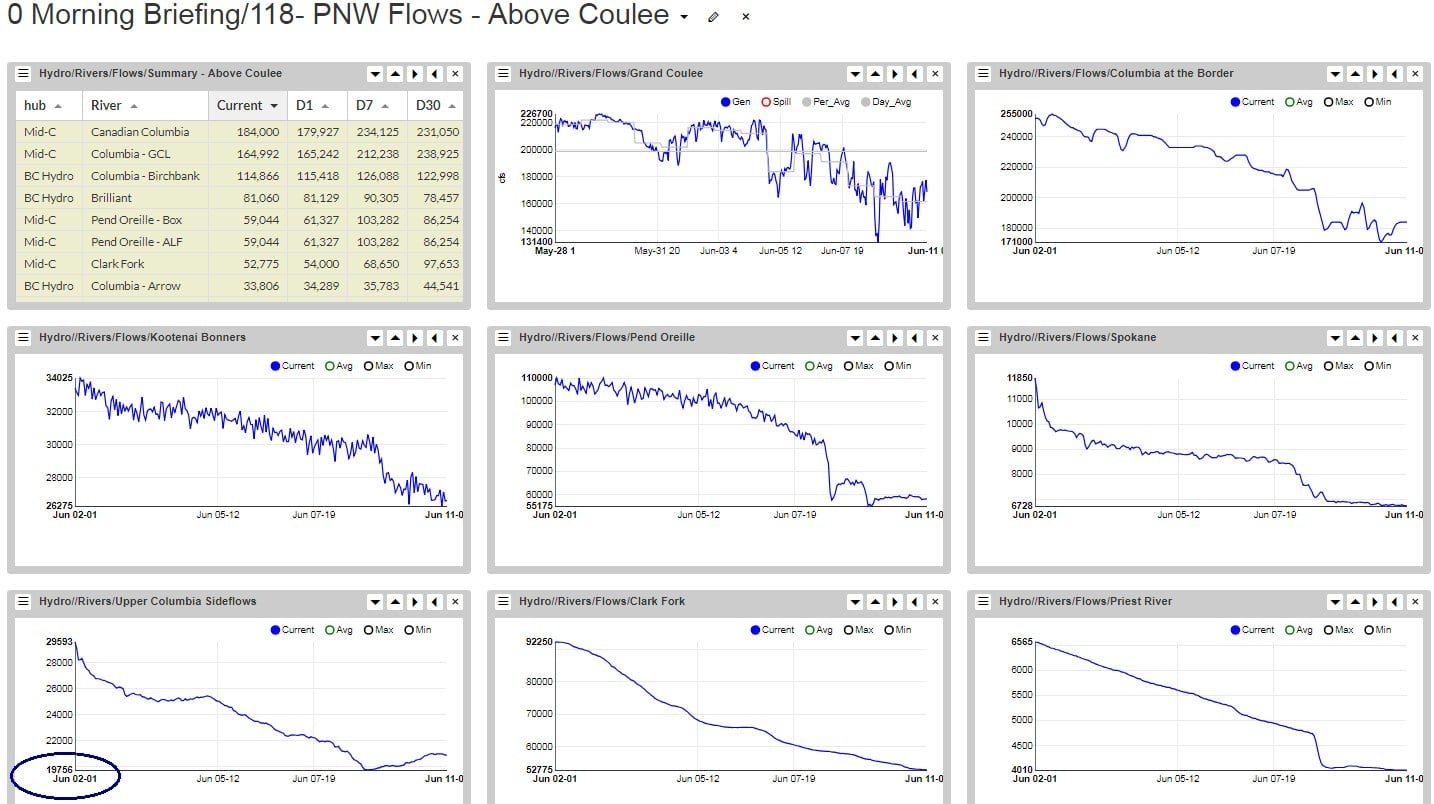 Clearly, the water year is winding down but given 16k term heat rates is it winding down fast enough? It seems it would need to wind to about zero to support those prices. 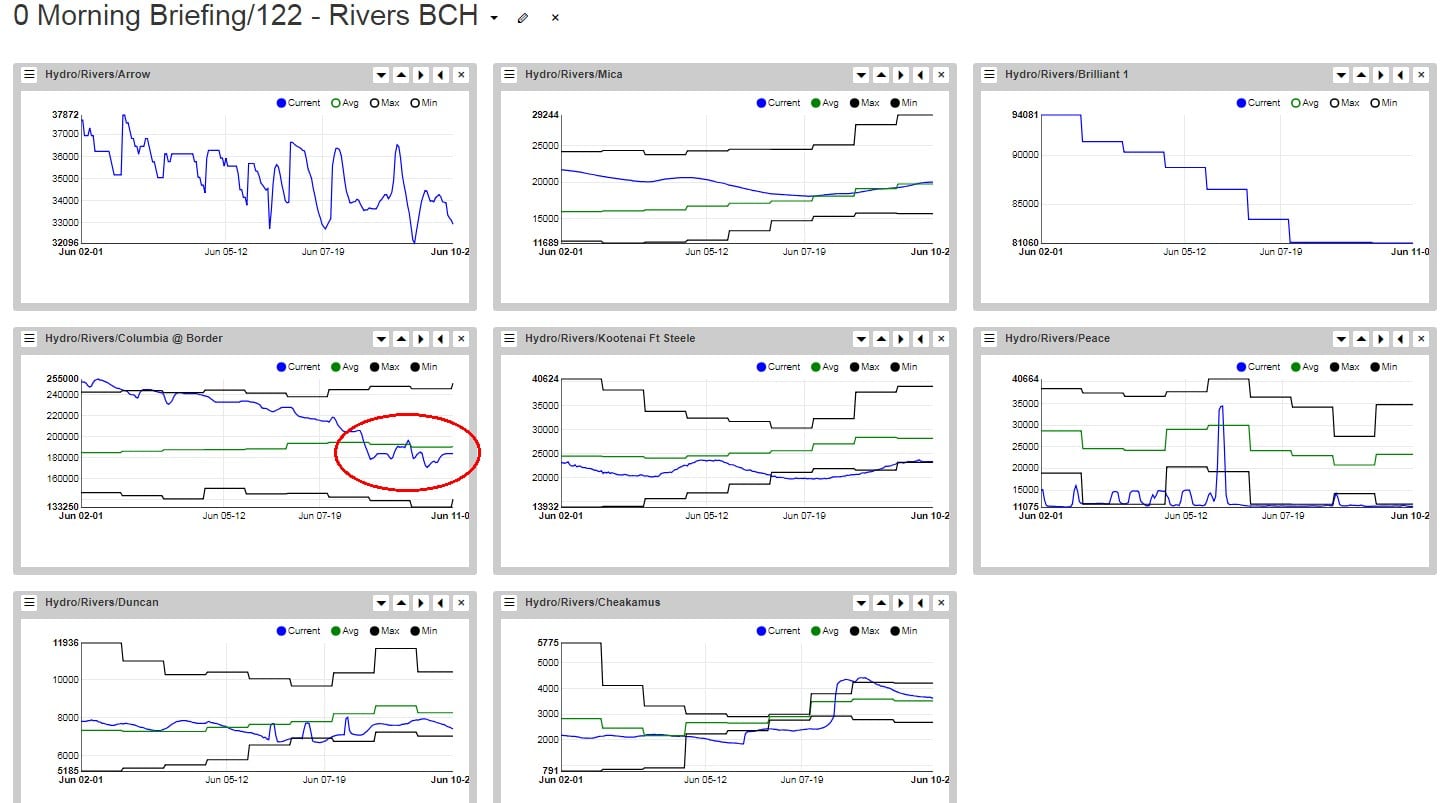 Inflows at the Border on the Columbia are now, for the first time since April, below average (Blame some of that on the Pend Oreille machinations). 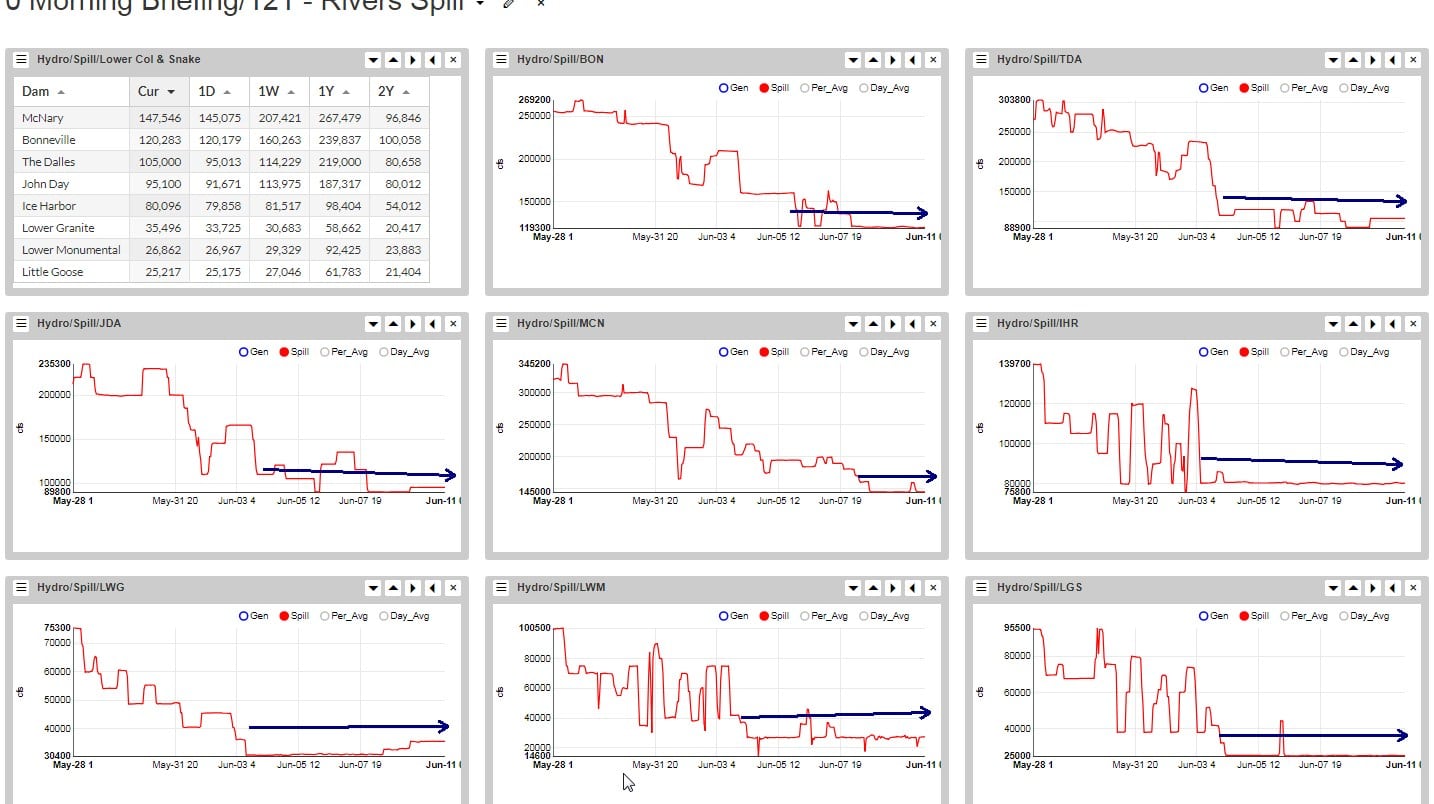 Another sign of a tired water year are the flat spill levels on the mainstems. Inflows have dropped to a level where spill can’t be cut any further, now cuts come out of generation. 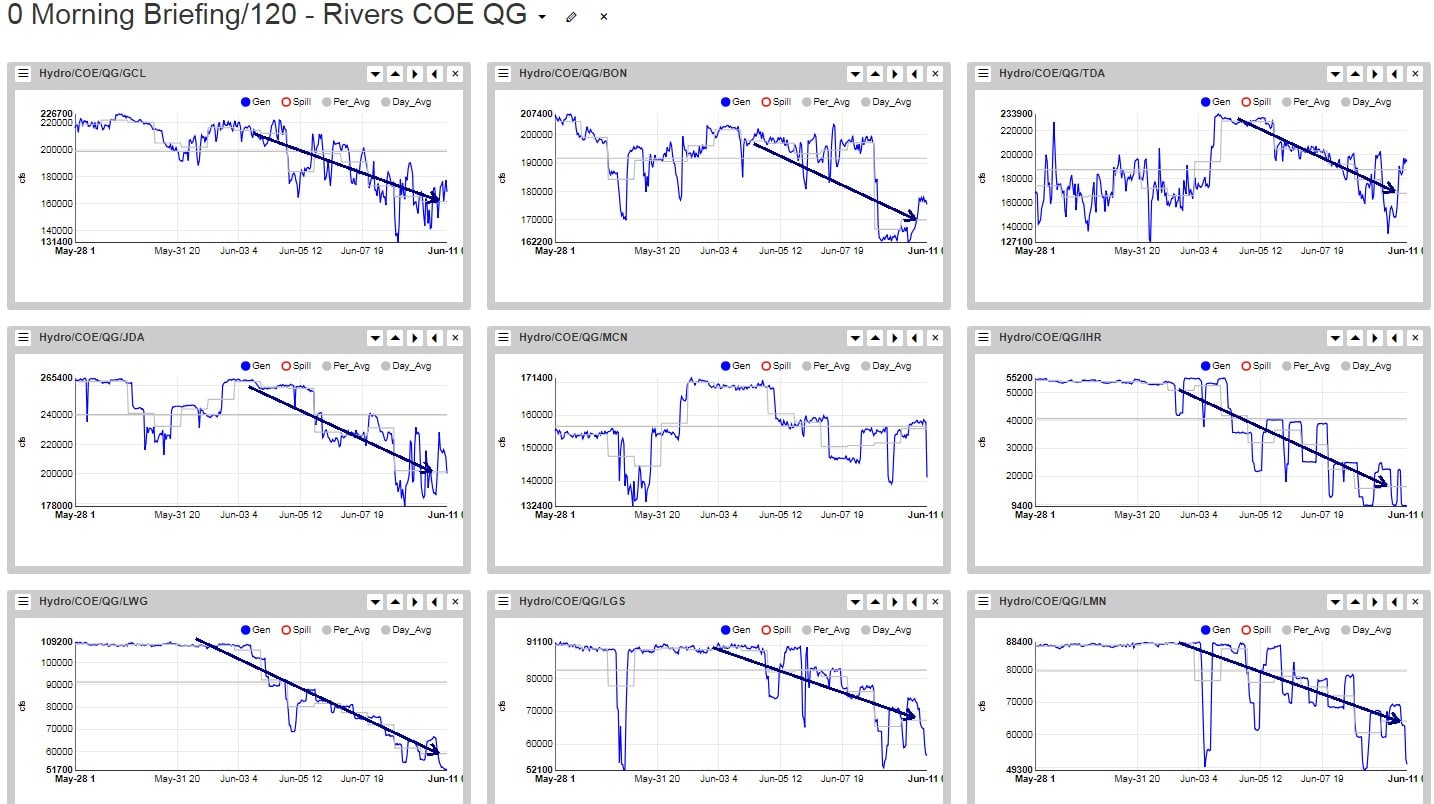 And cutting they are. Maybe this will be the last time we post something snow-related for this water year: 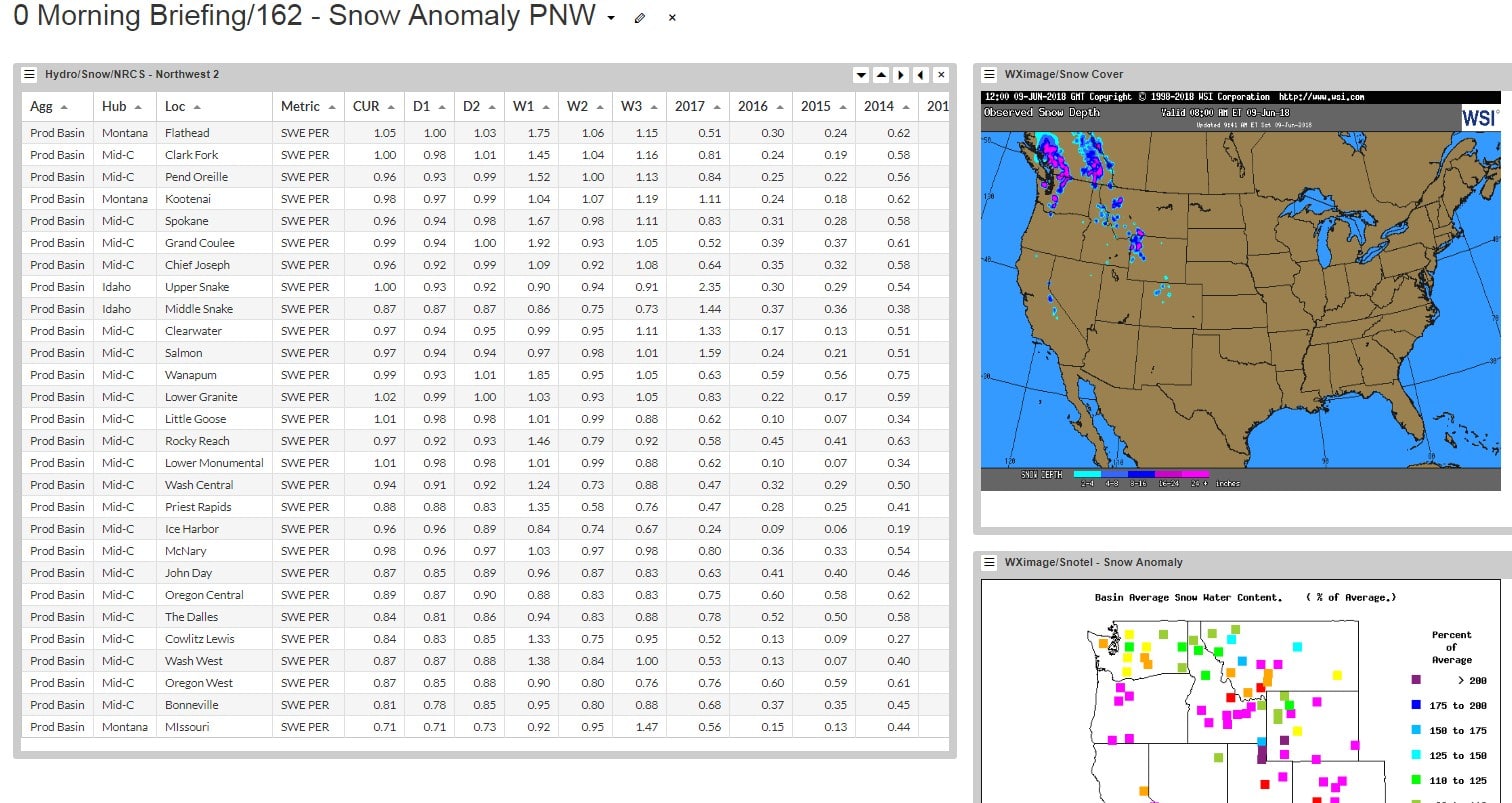 Most stations are “normal,” but when you look at the Snow Depth map all you can say is “So What?”. Party over, go home and count your millions and start looking for that second or third home. 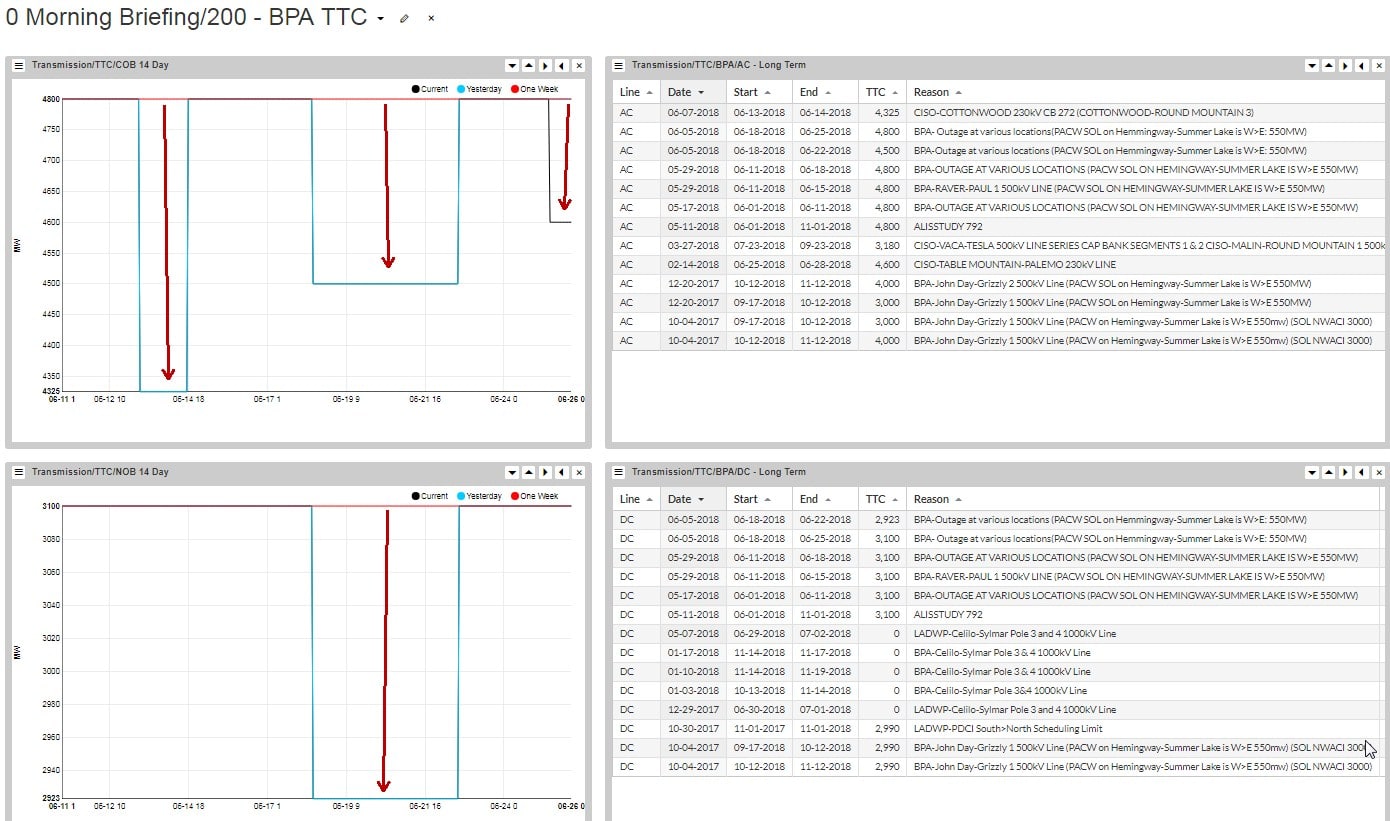 Minor tweaks in the south-bound lines, all cuts.

Canadians remain a net buyer. I’d have thought after getting “Trumped” in Quebec they’d just disconnect the line. I’d like to formally apologize to all my Canadian friends for the words and actions of our president. He isn’t America any more than Hitler was Germany. The man is an aberration, a canker sore that arose from a segment of America’s population that is angry. Angry because Fox news tells them they are angry and it is easier to get your emotions from television than books or reason.

MidC grows more bullish but don’t expect that to translate into a rallying term market – it already rallied, probably too much. The southern hubs see a modest tightening in the early part of this week, then revert to a more bearish outlook for the balance of the ten-day. Though it might be tempting to buy into the sell-off, we’d pass and wait for something actually bullish – or just cheaper prices.

Oh, and one more thing, I hate our President.