Our news of the day is the violent moves in BOM Mid-C, and we aren’t saying the move is irrational but is it rational? 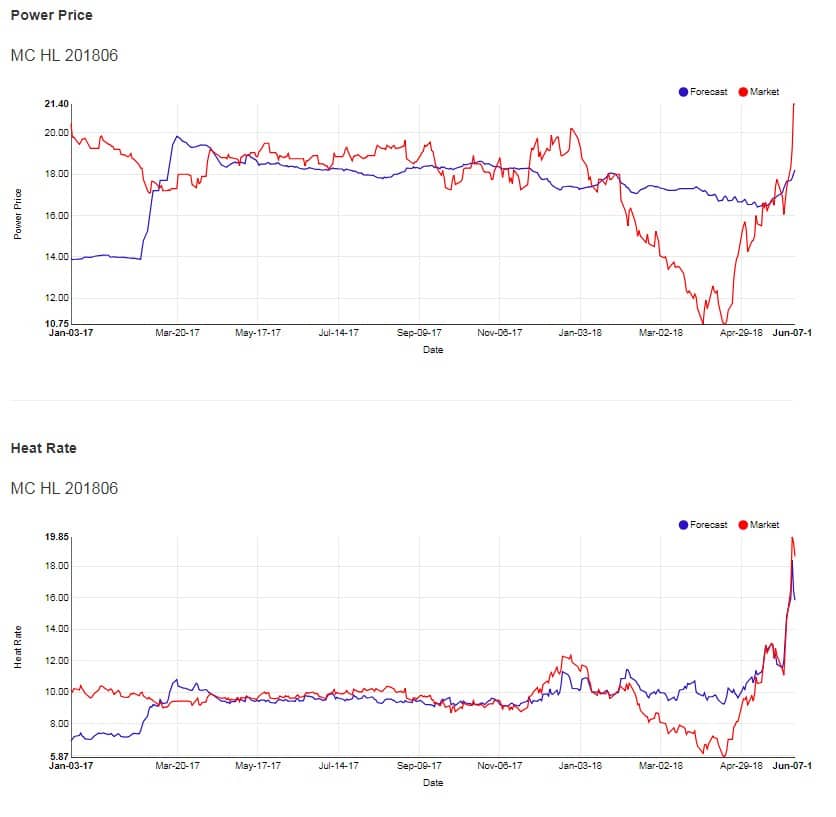 If you look at just price, you might think “well, gas rallied” but you’d be wrong; check out that heat rate – 19k all the while Grand Coulee realizes 220kcfs inflows. Drop the latter in any model, and you won’t get a 19k heat rate unless your model is broken. So the market model is utterly broken. Most likely, what is driving that heat rate is the daily LMPs at NOB and COB:

Both hubs are trading nearly flat to their parent nodes all of which drives an other-worldly 20k heat rate in cash. Stranger yet, and we all love strangeness in the world of commodities, right?, is the AC didn’t even fill up over the last day or so: 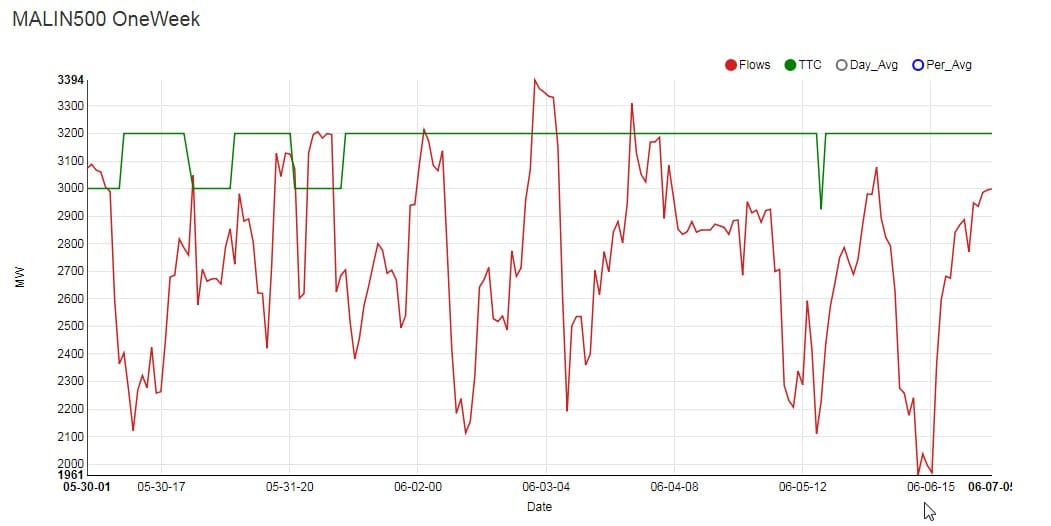 And to add bizarre to odd, most of the Mid-C gas didn’t turn on: 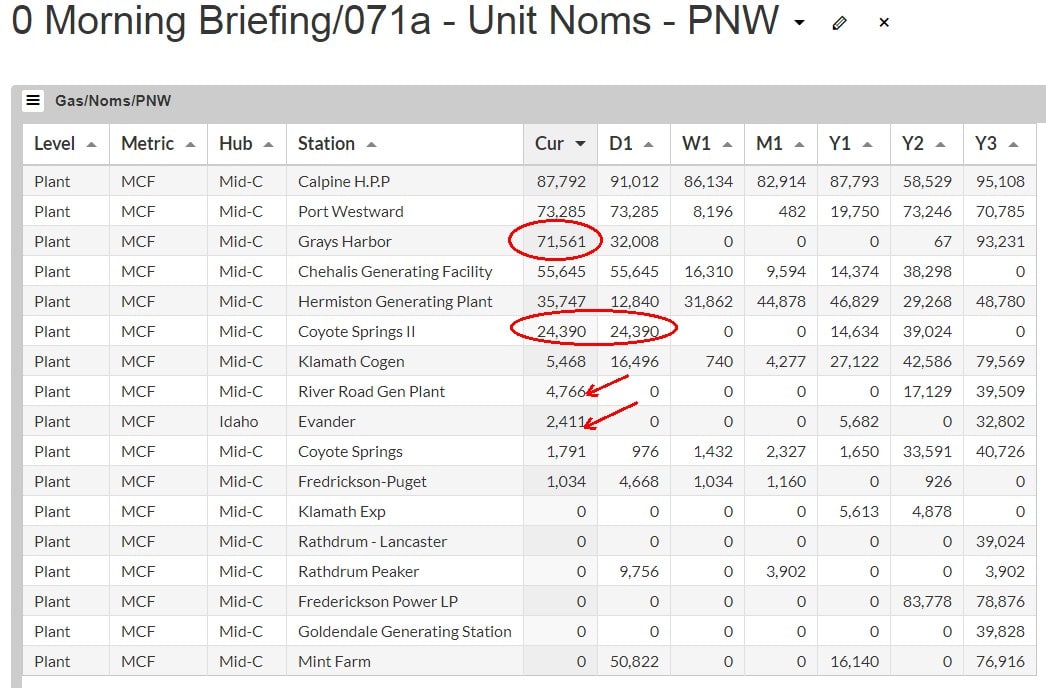 Sure, a couple of plants brushed away the cobwebs but if there is blood in the water why aren’t the sharks circling? And 20k heat rate is bloody blood. Oh well, just another day in WECC.

On the weather front, things are turning more bullish: 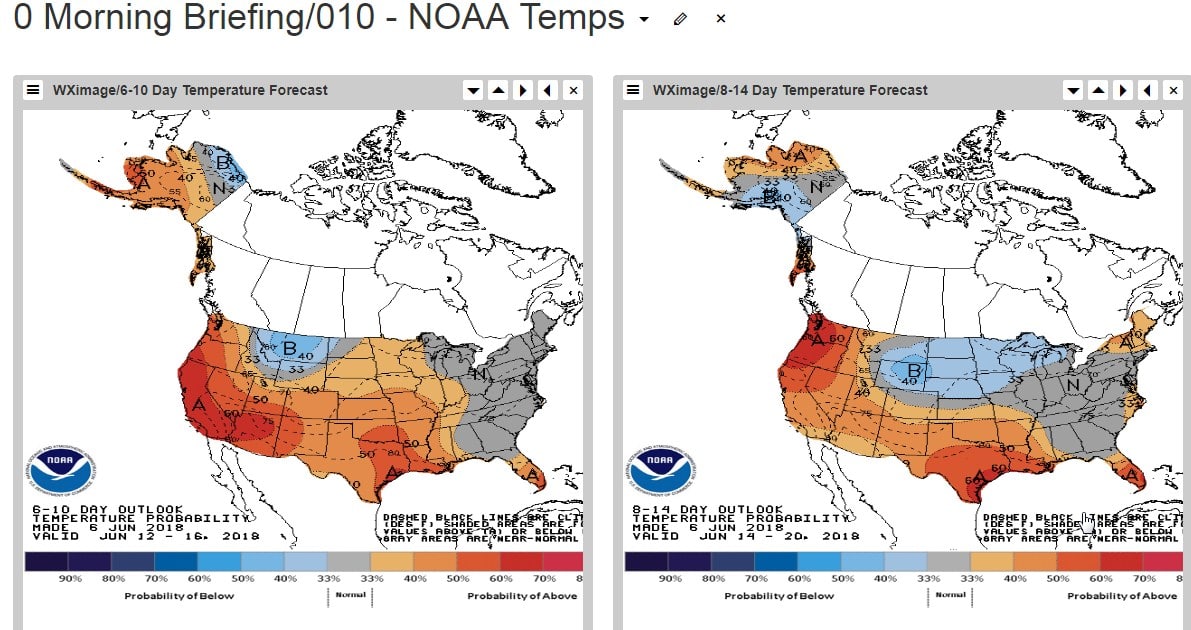 The coastal SP zone gets the most significant CDD anomaly in the nation in the 6-10 day; then the Northwest enjoys that honor in the 8-14. 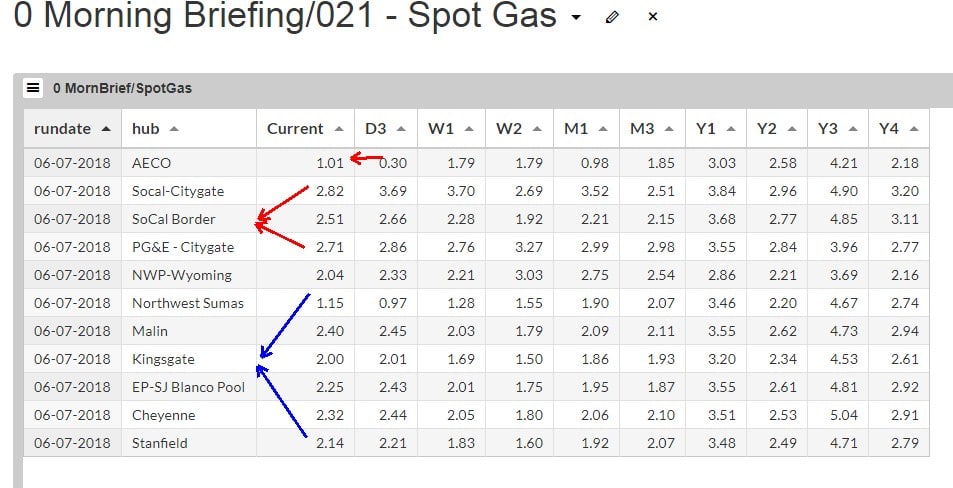 Socal Citygate cannot hold its three handles for long; now it trades a modest $0.11 premium to PG&E. AECO rallied out of that amazingly deep hole it found itself in yesterday ($0.30!!!!) and now boasts a buck handle. AECO’s cousin, Sumas, is also a battered hub as it posted a miserly $1.15 clear yesterday. Contrast Sumas with the MAGA hub Stanfield; the latter is nearly twice as big as Sumas …. MAGA! 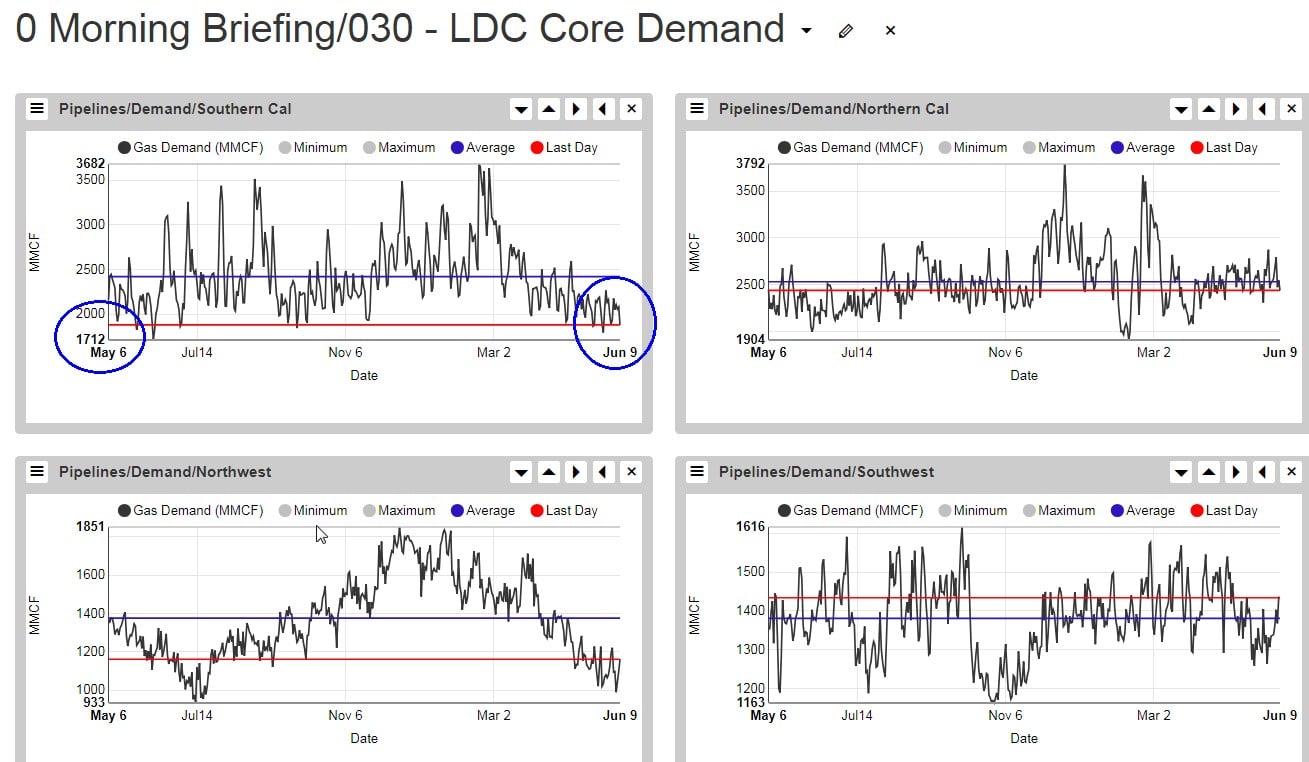 OK, we have to say it – Socal Gas fundamentals blow. The zone is realizing record low demand yet those ridiculous term premiums remain. 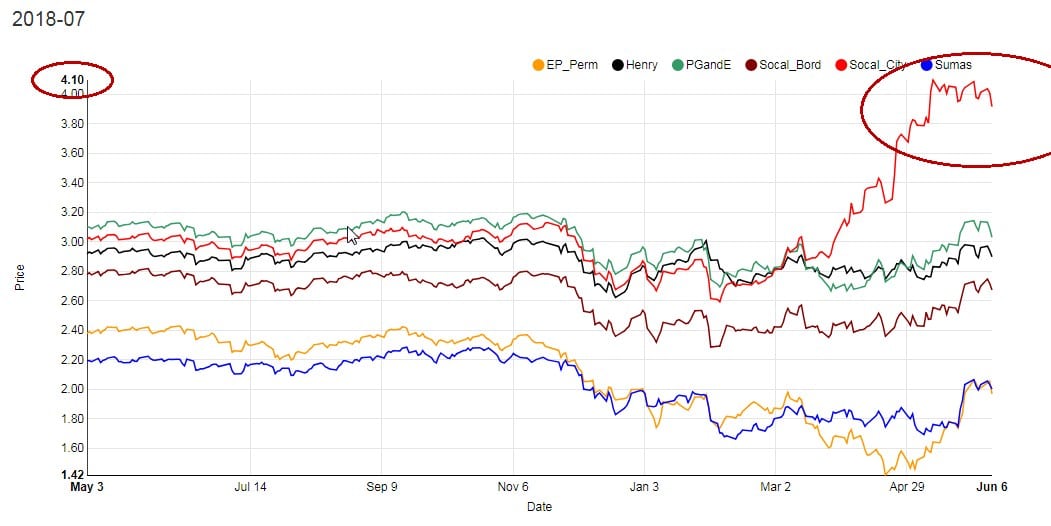 The long-side logic goes something like this: “Aliso Canyon constrains withdrawal capacity, and on a scorching day LA is screwed, and the gas turbines can’t run because there is no gas and a few of those spot days will clear $20/mmbtu”.  LOL

We might agree if we were talking about December, but we are talking about July. The only way SCG runs out of gas in July is if LA hits 115 for a week straight – which is about a 99 standard deviation event.

But wait, you say, SCG has storage issues, the poor LDC can’t inject enough gas, Aliso is broken, the sky is falling.

Nope, SCG is injecting more gas today than any time in the last five years; you have to go back to 2013 (2 years before Aliso meltdown) to see more gas going into the ground.

Prediction – July SCG gets smoked a buck or more in the next two weeks. 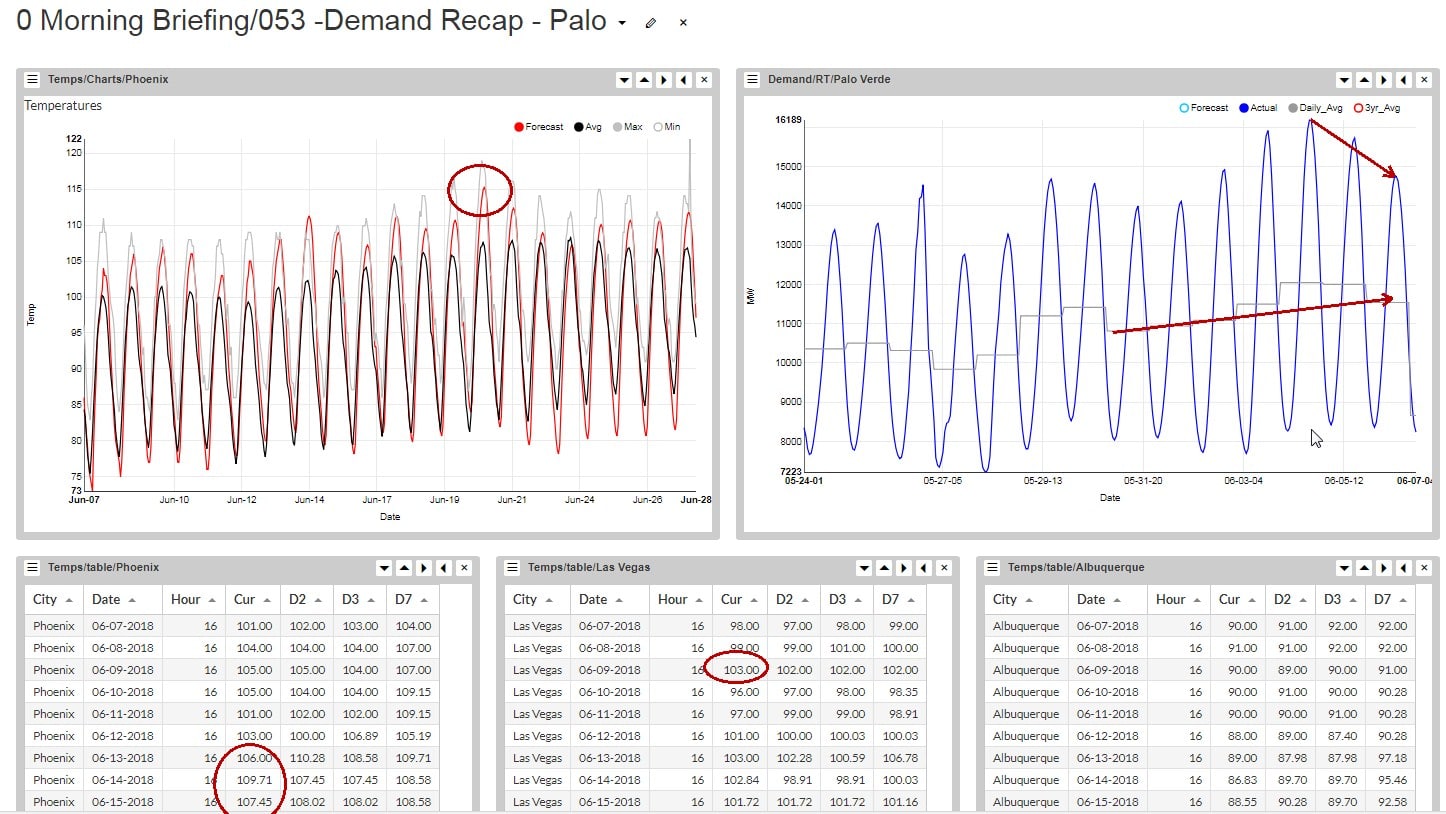 Temperatures at Phoenix will stay above average for the foreseeable future; perhaps normal is no longer normal and current is the new normal. Nothing remains insanely hot like last year, nothing approaches 120, though one outlier day two weeks out stalks 115. 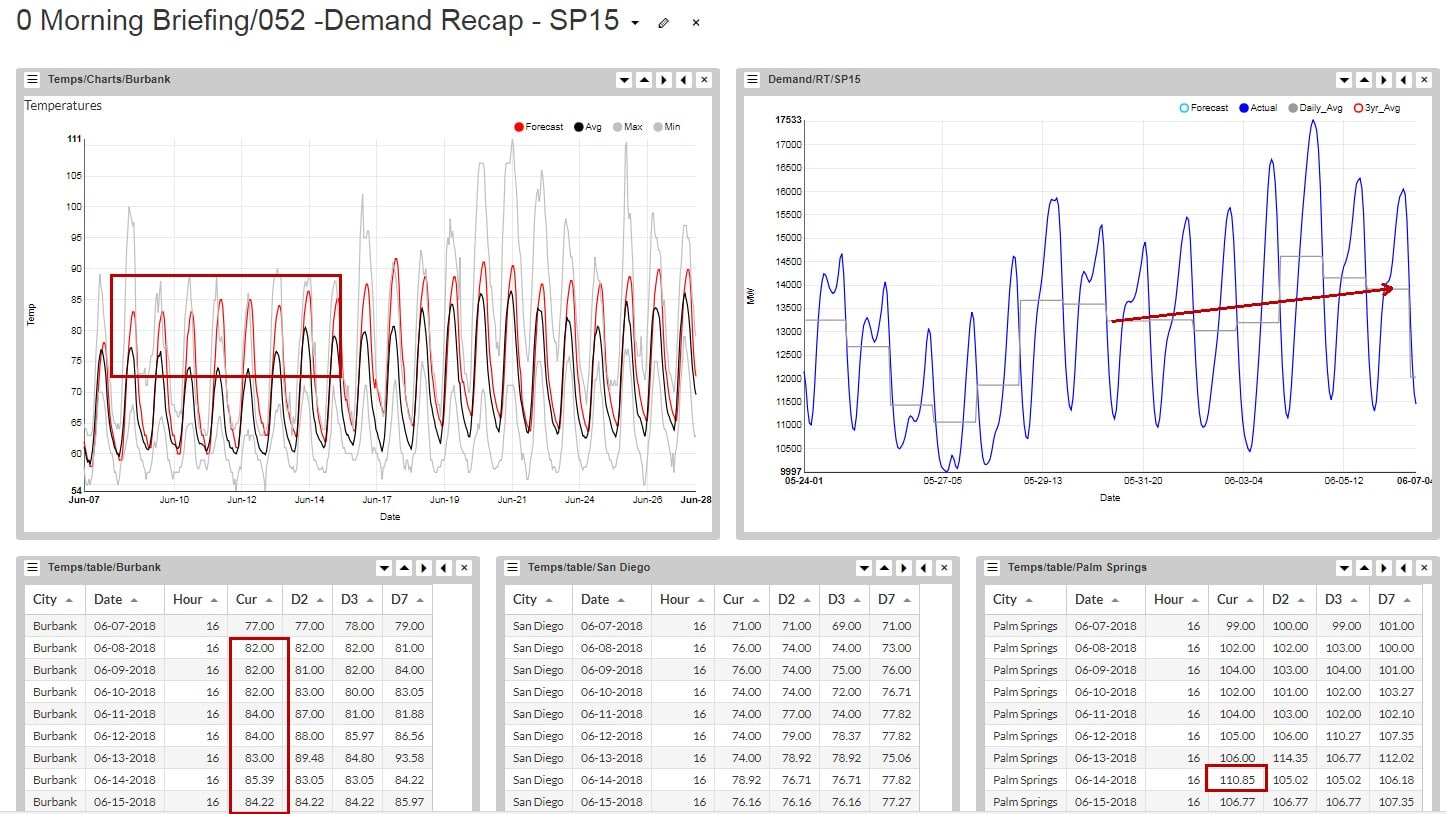 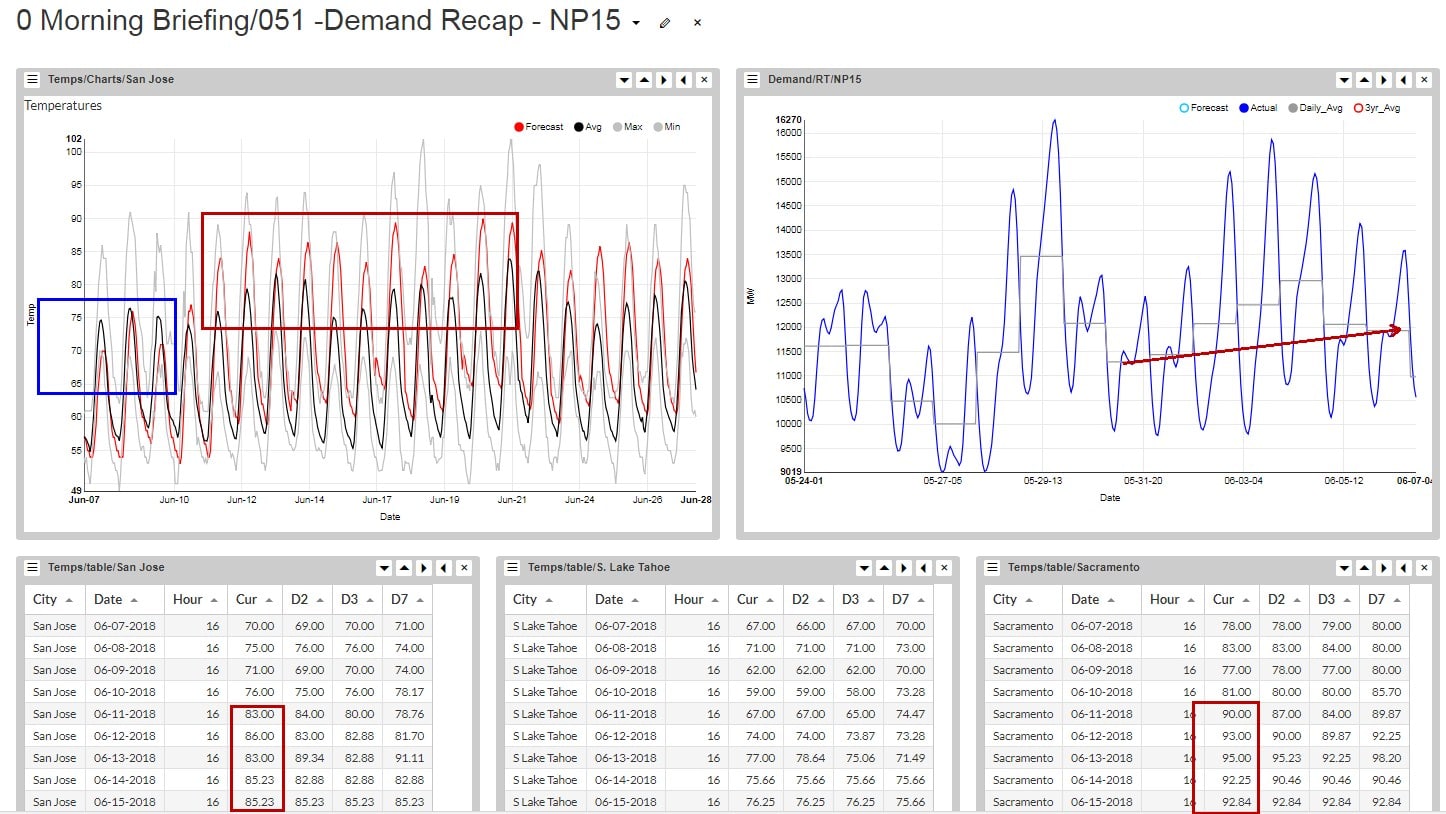 Northern Cal is mild, even below normal, through the weekend than warms up, but like its southern sister hub, it isn’t hot, just warm. Loads tanked over the last couple of days, Sunday’s loads were higher than any day this week. 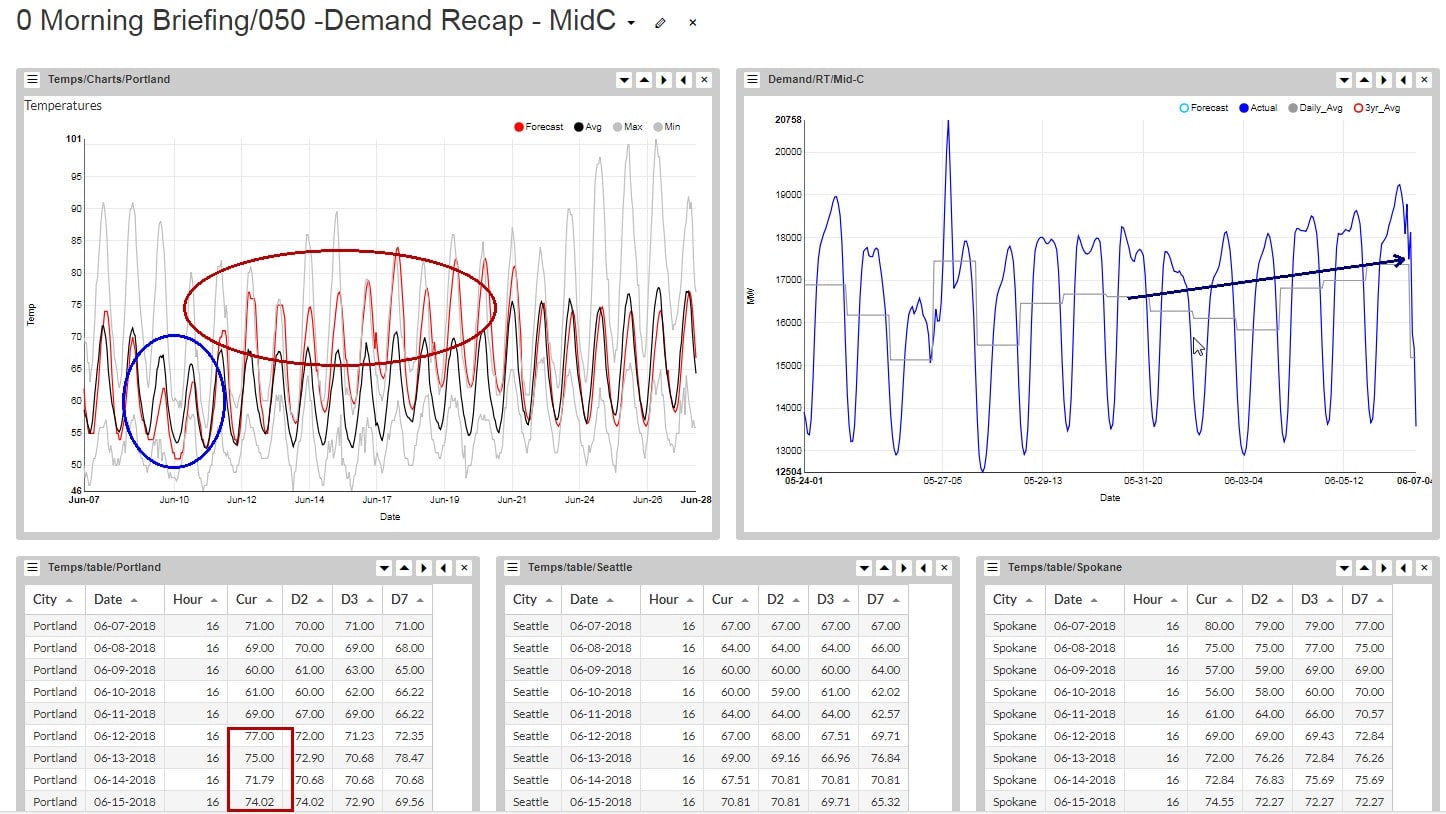 Mighty MidC, the land of the 20k BOM heat rate, will see temperatures slide further, demand grows weaker into next week. But there are hints of bullishness; perhaps Portland will see some low 80s! LOL. 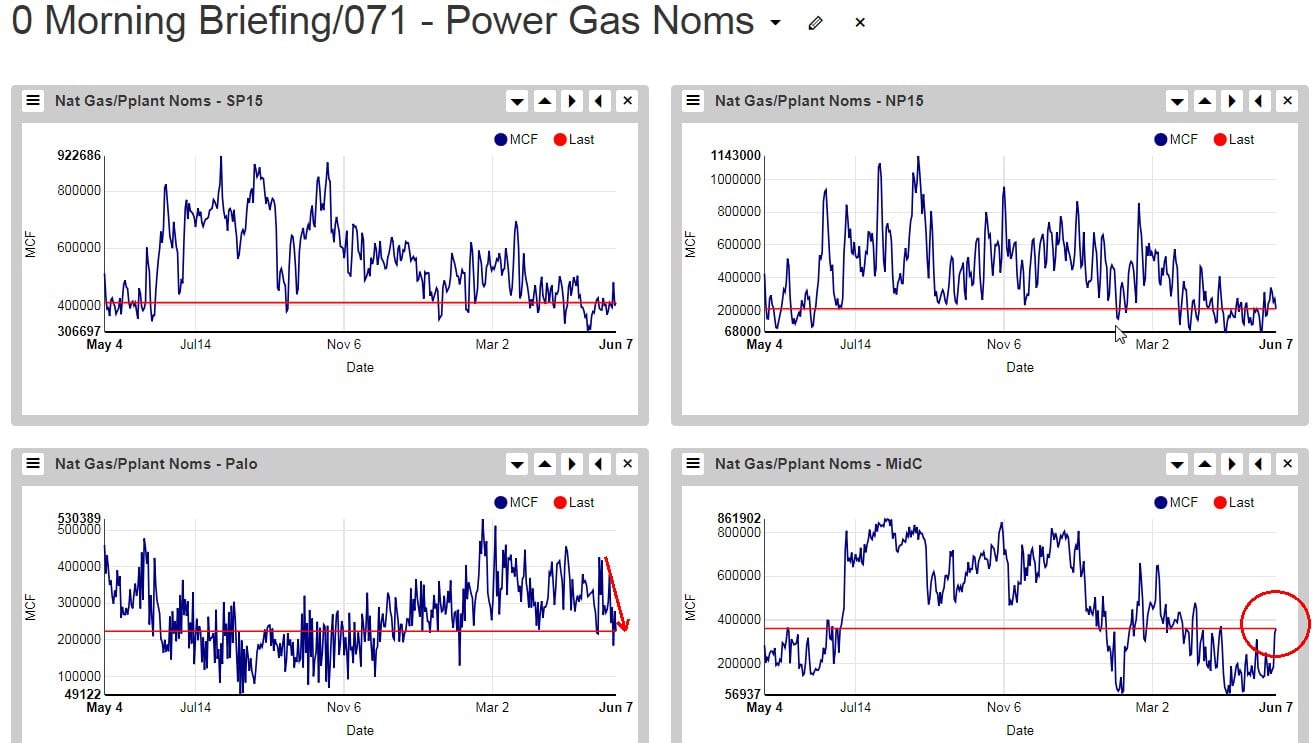 No wonder spot gas is so lame; the electric-side demand is so weak. The only sign of life was that slight pop at MidC. The weather outlook will drive higher noms, but nothing like a hot summer day. 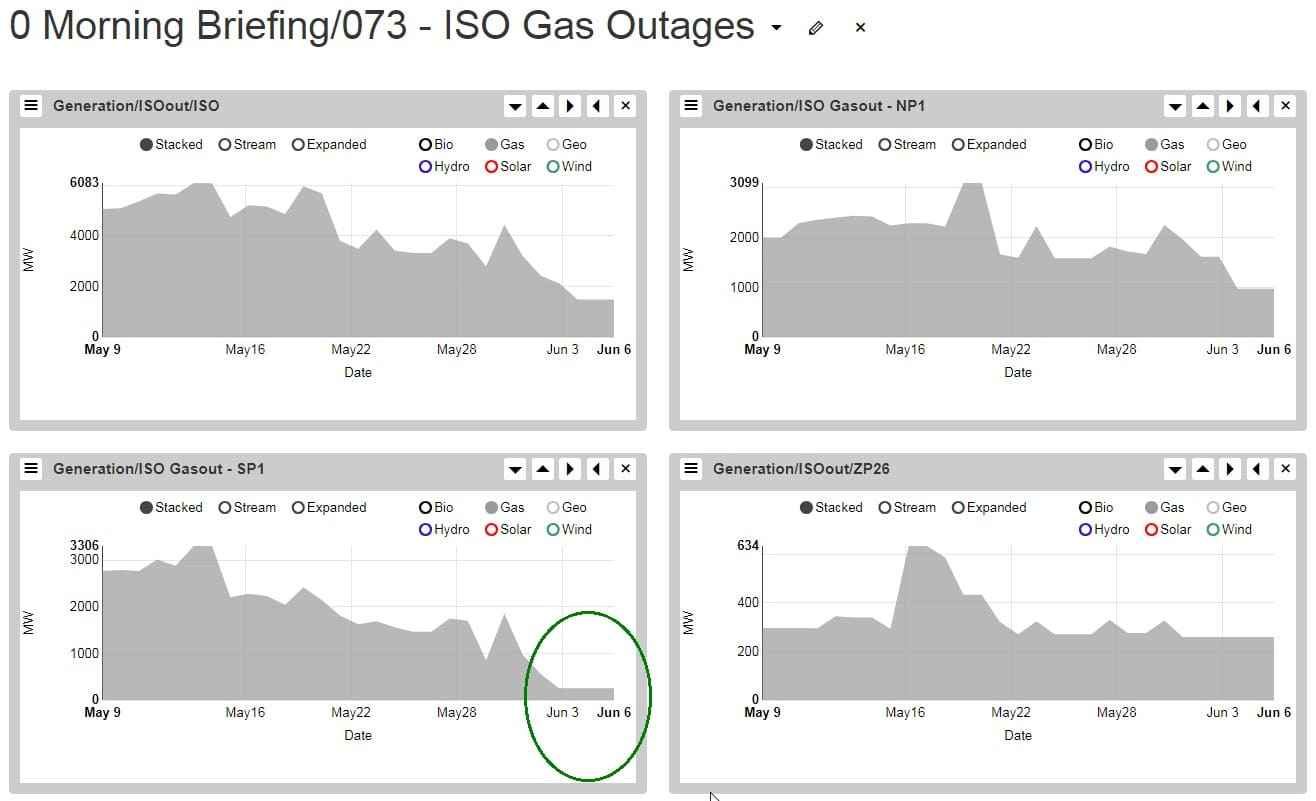 ISO outages are usually unworthy of comment in June, but we couldn’t resist pointing out the miserly levels of gas offline in SP15 – like 200 MW? We decided to dive deeper into this anomalous anomaly:

And found this is a five year low; perhaps its bad data, but if it’s not it is bearishly newsworthy. All men are on deck; there just isn’t a war to be fought. 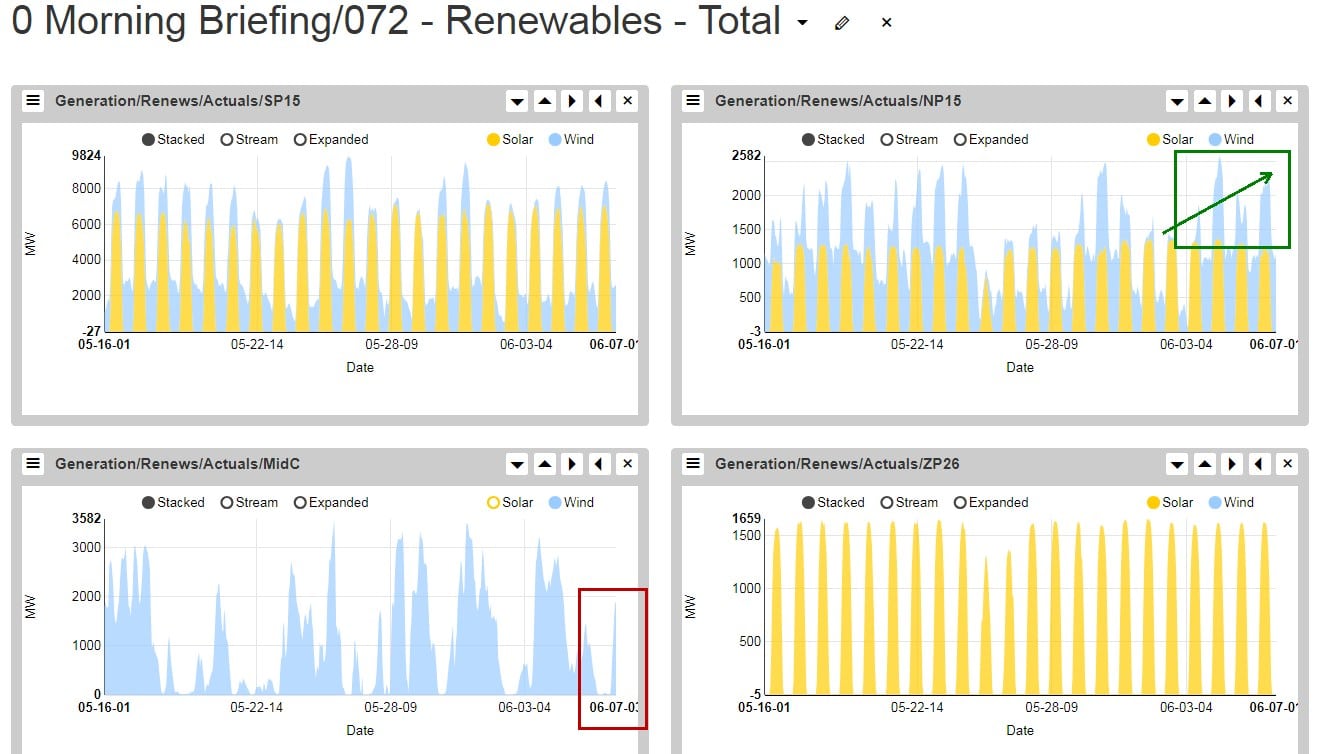 This dead horse is not dead just yet; we think we can squeeze a few more weeks of hype out of WY18. Here is our attempt today:

What do we know? We know the COB cleared at a 20k heat rate. Let’s look to GCL for clues. Several jump out:

Perhaps the feds were long BOM and needed to sell?

No more conspiracy theories – just the facts. The fact is, the ponds are filling faster in MAGA than Canada. 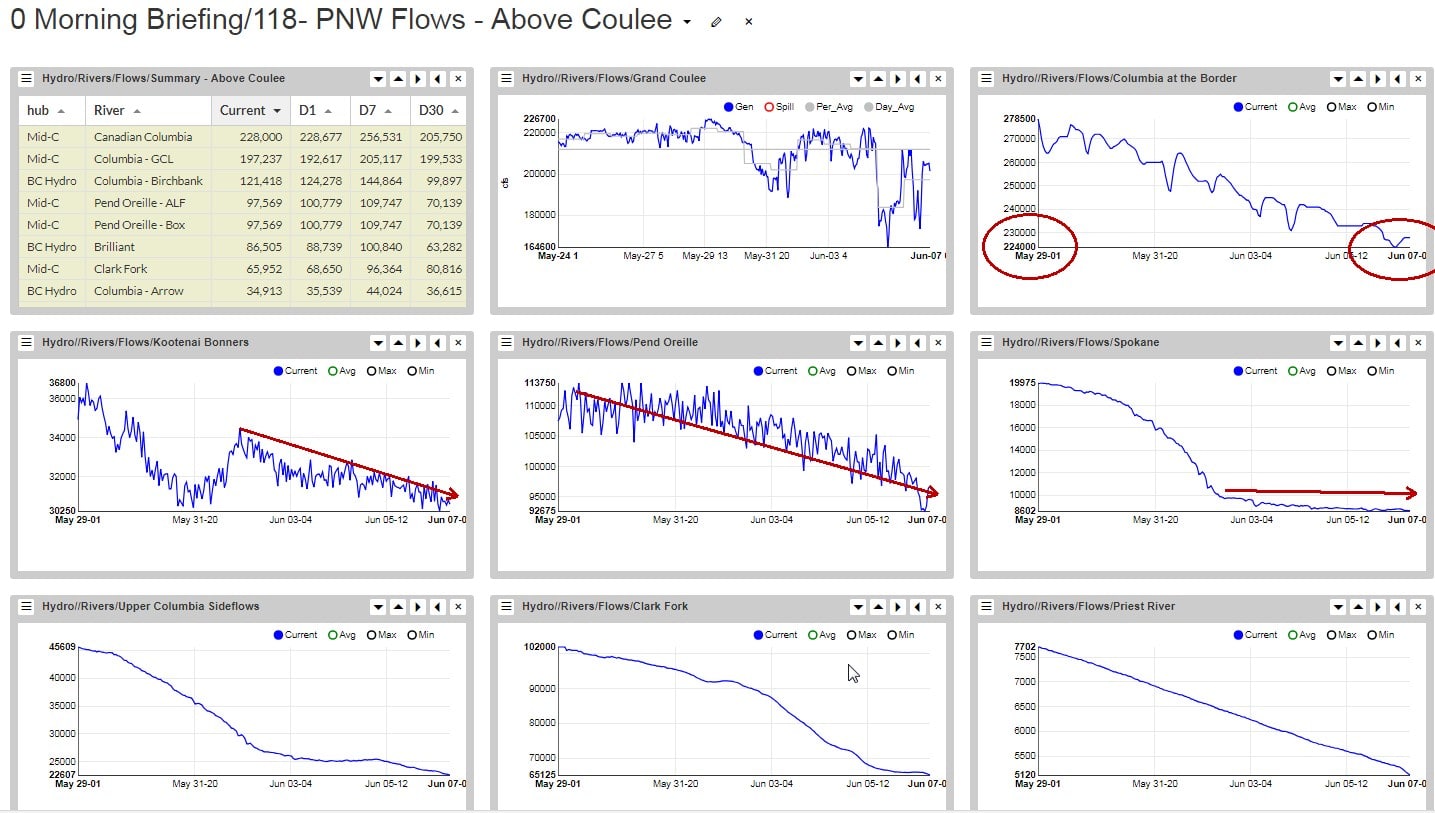 Another fact – every river above Coulee is ramping down. 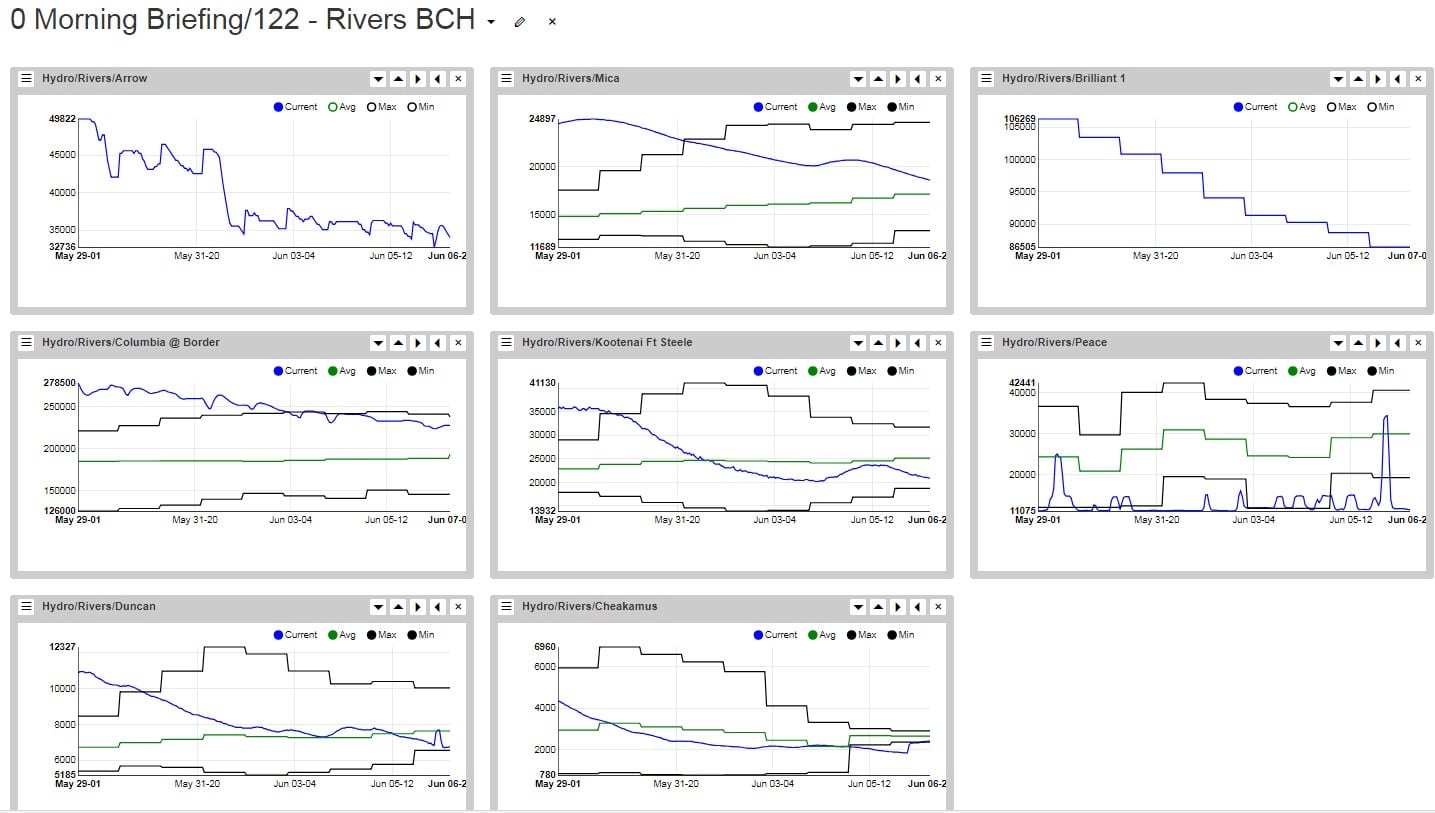 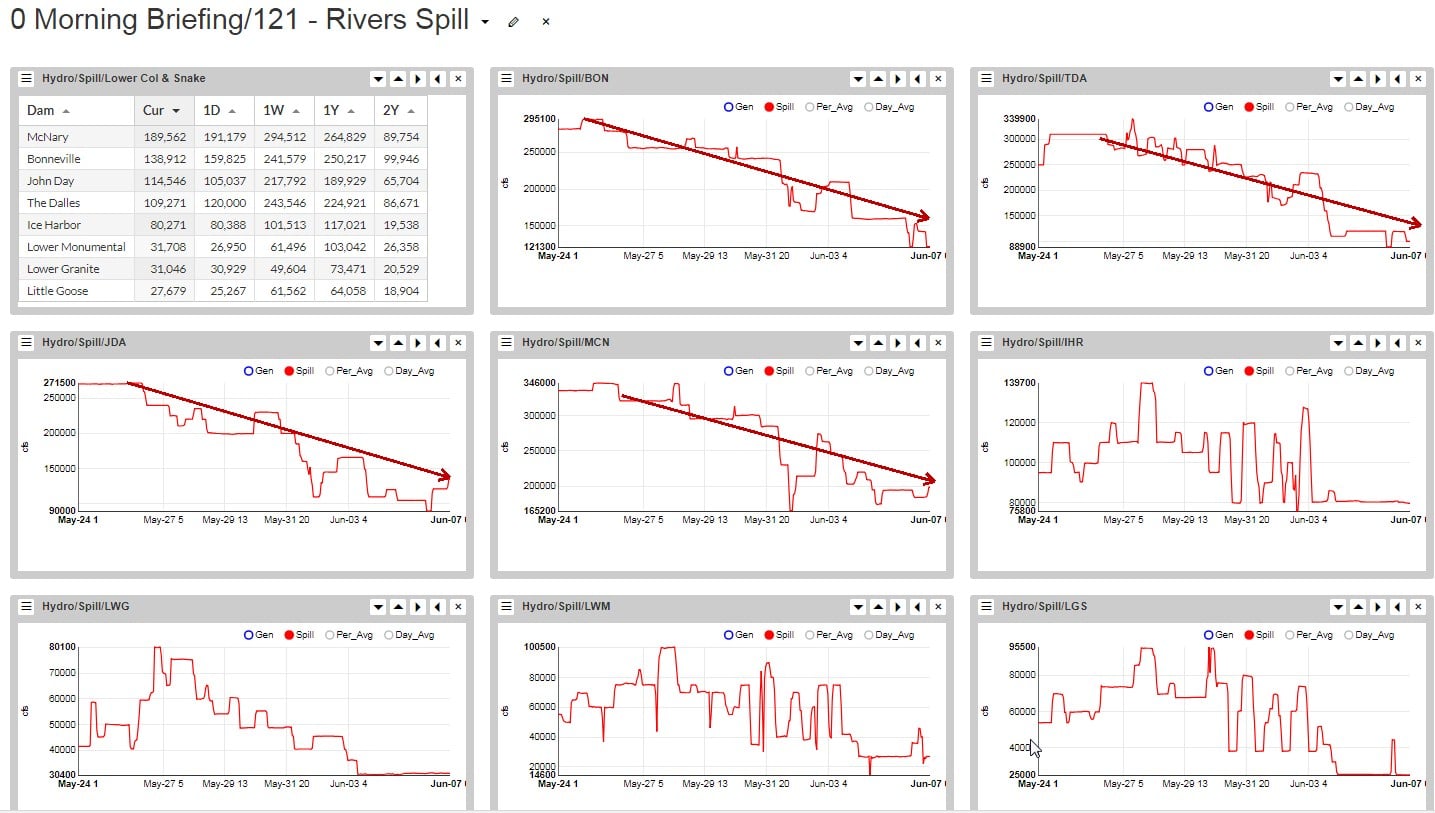 Mainstem spill is sharply off, less so on the Snake than the Lower Columbia. 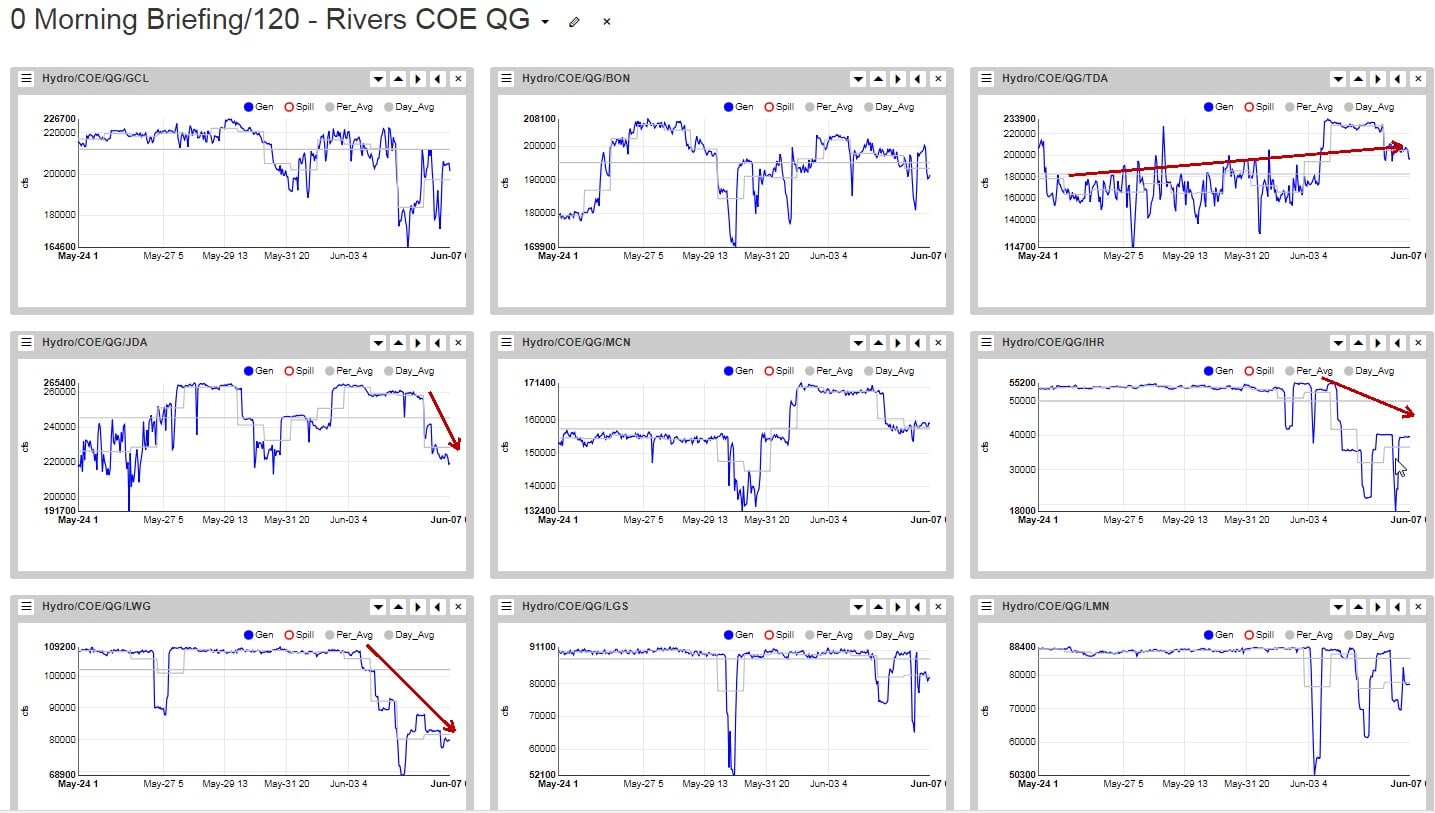 Yet energy, QG, is not falling much, at least not on the mainstem. We think the spill cuts are about over so any further drop in inflows will come out of generation. 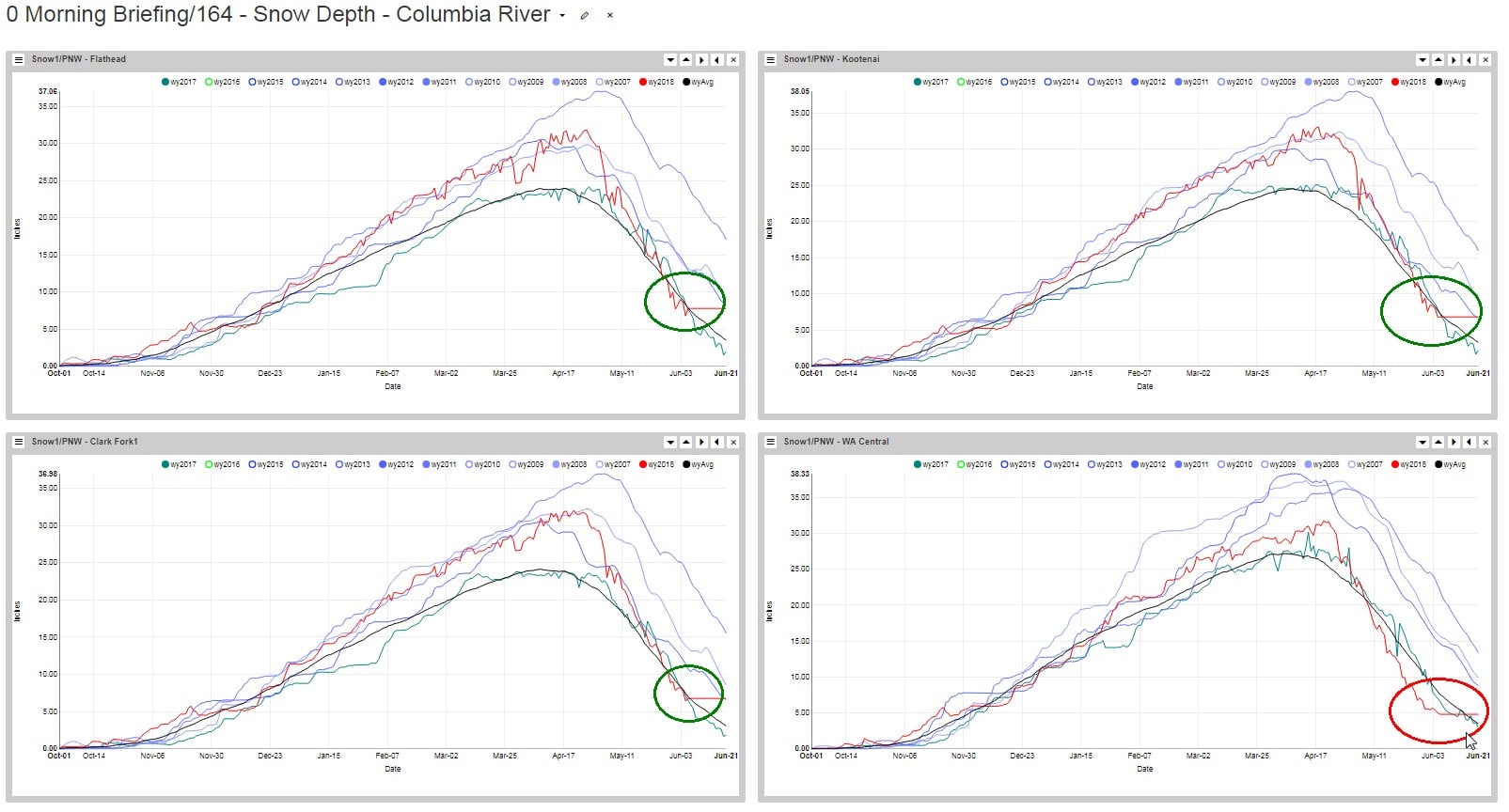 Recent cool Northwest temperatures have slowed the pace of melt, now three of the above Coulee stations are back to normal. 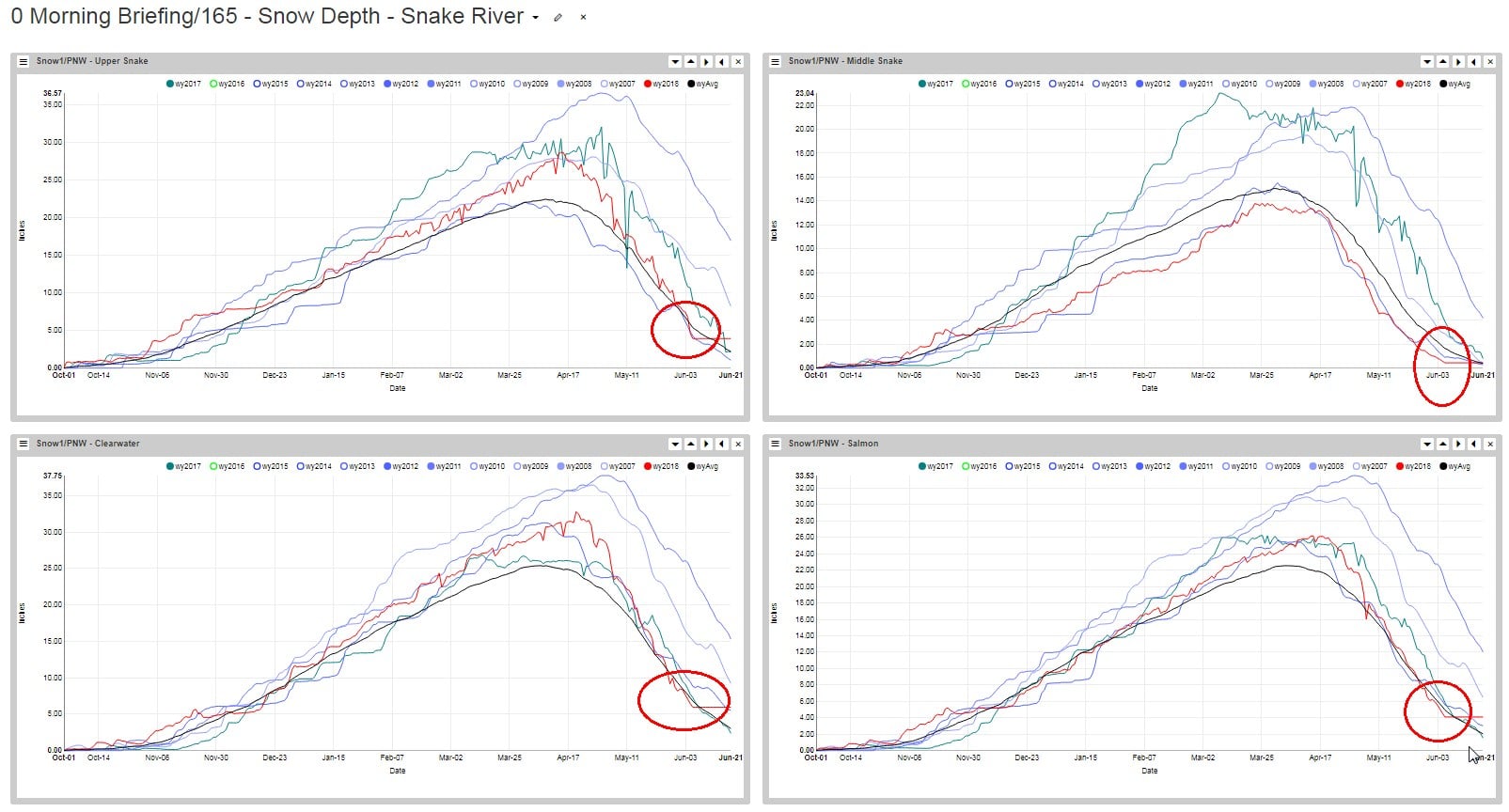 Not true on the Snake, all are now below average. All of which suggests decent inflows into Coulee for the remainder of the month and less spill on the Lower Snake. 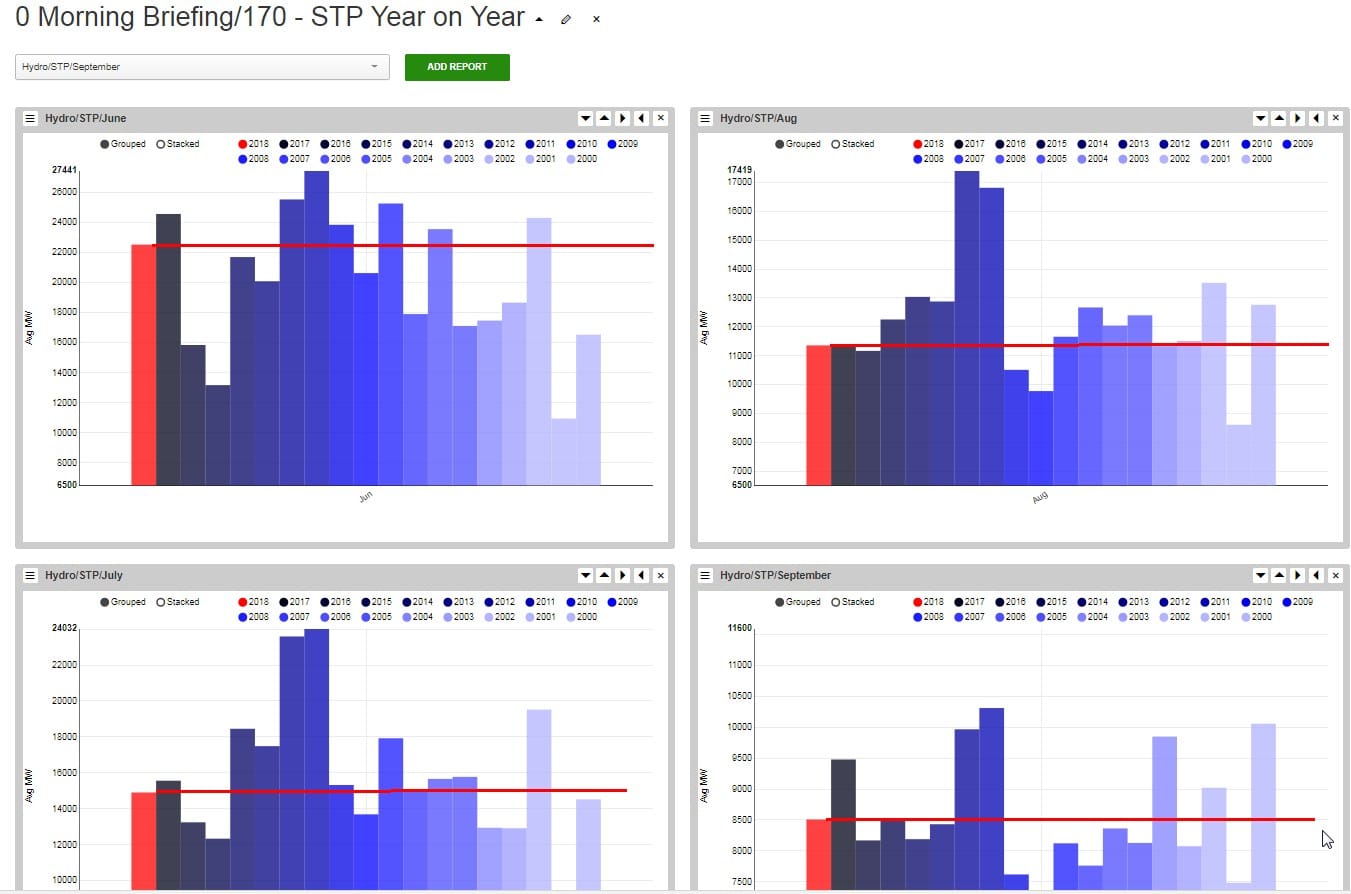 Given normal snow, we’d expect normal energy and that is mostly what the RFC’s STP is offering. We don’t disagree with any of these forecasts.

Be forewarned; the ten day is driving its forecast ever lower suggesting next Monday’s BOM is lower than this week’s. 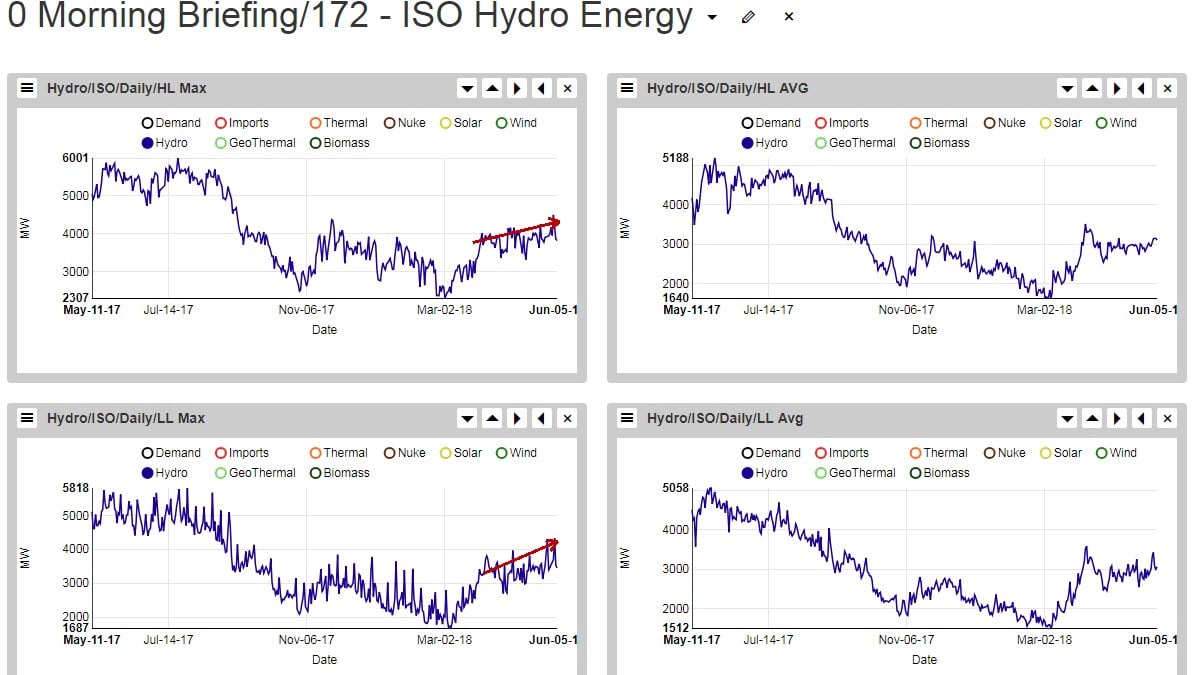 Reference back to that Reservoir Chart previously posted; the California system is about as good as it gets, storage-wise. In times of panic the ISO owns bullets it didn’t have in the 2013-16 era, and we see signs of that when looking at the maximum energy plots – both HL and LL are sloping up. If energy is needed, the ISO is sitting on 1000-2000 MWs of swing capacity. 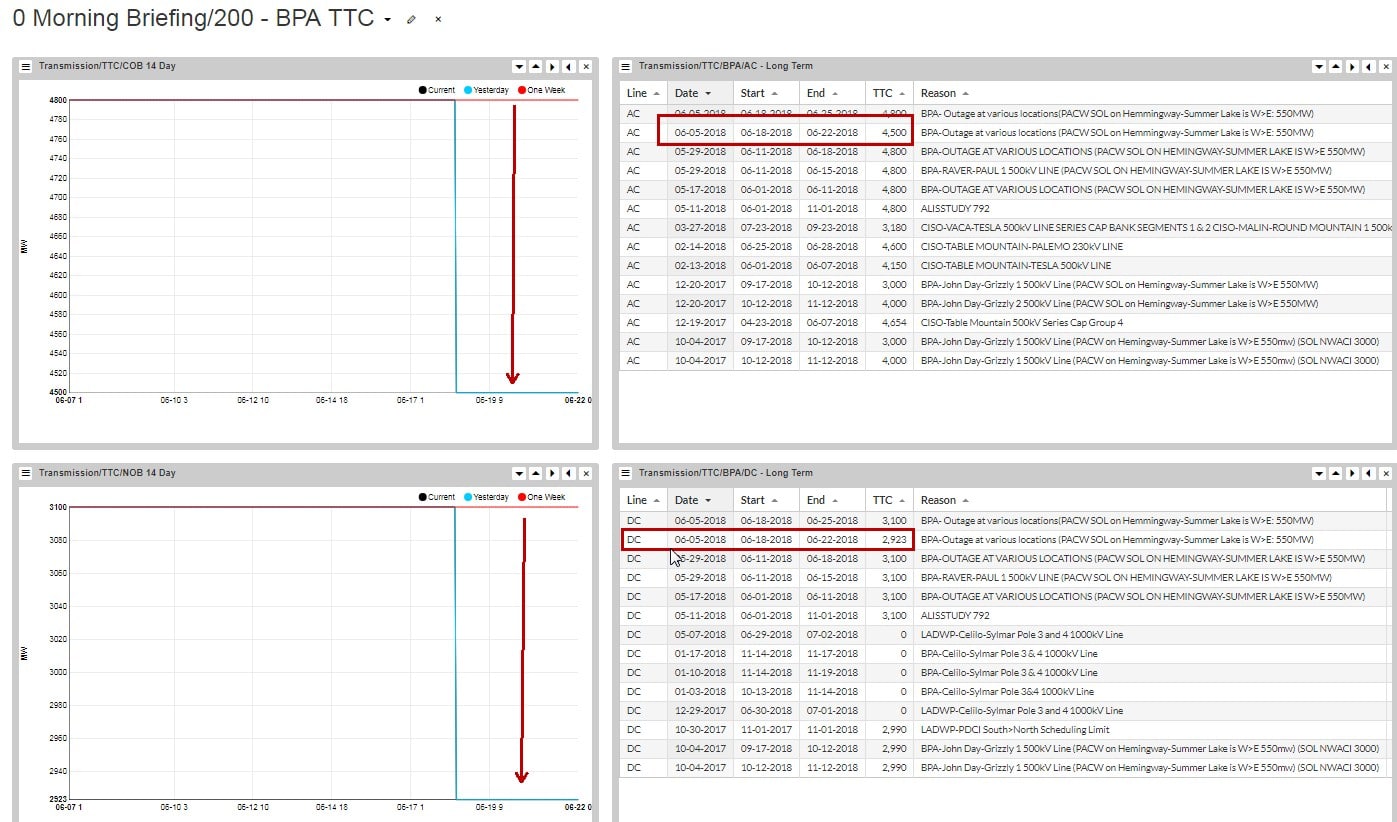 A couple of modest, and short-lived, cuts in TTC.

The Northern Intertie remains a zero-sum game- what goes north comes back south. The AC wasn’t filled, we spoke to that earlier. Path 15 puked energy back into ZP for a few hours which speaks to how weak NP was.

The Northwest is growing more bullish by the day off of cuts in streamflow, but there is nothing to support the silly COB heat rates. The rest of the WECC grows warmer but not hot and there is so much idle generating capacity to serve that modest marginal load we doubt we see crazy prices for a week or longer.