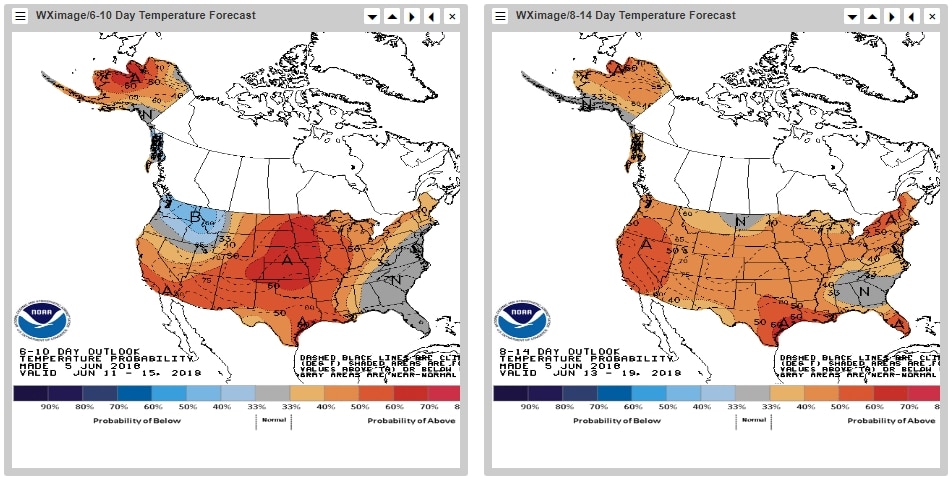 Cooler than normal temps should be in store for the Northwest, at least through the first week of the two-week forecast.  The second week will see a return to warm temps throughout the WECC, though especially so in California. 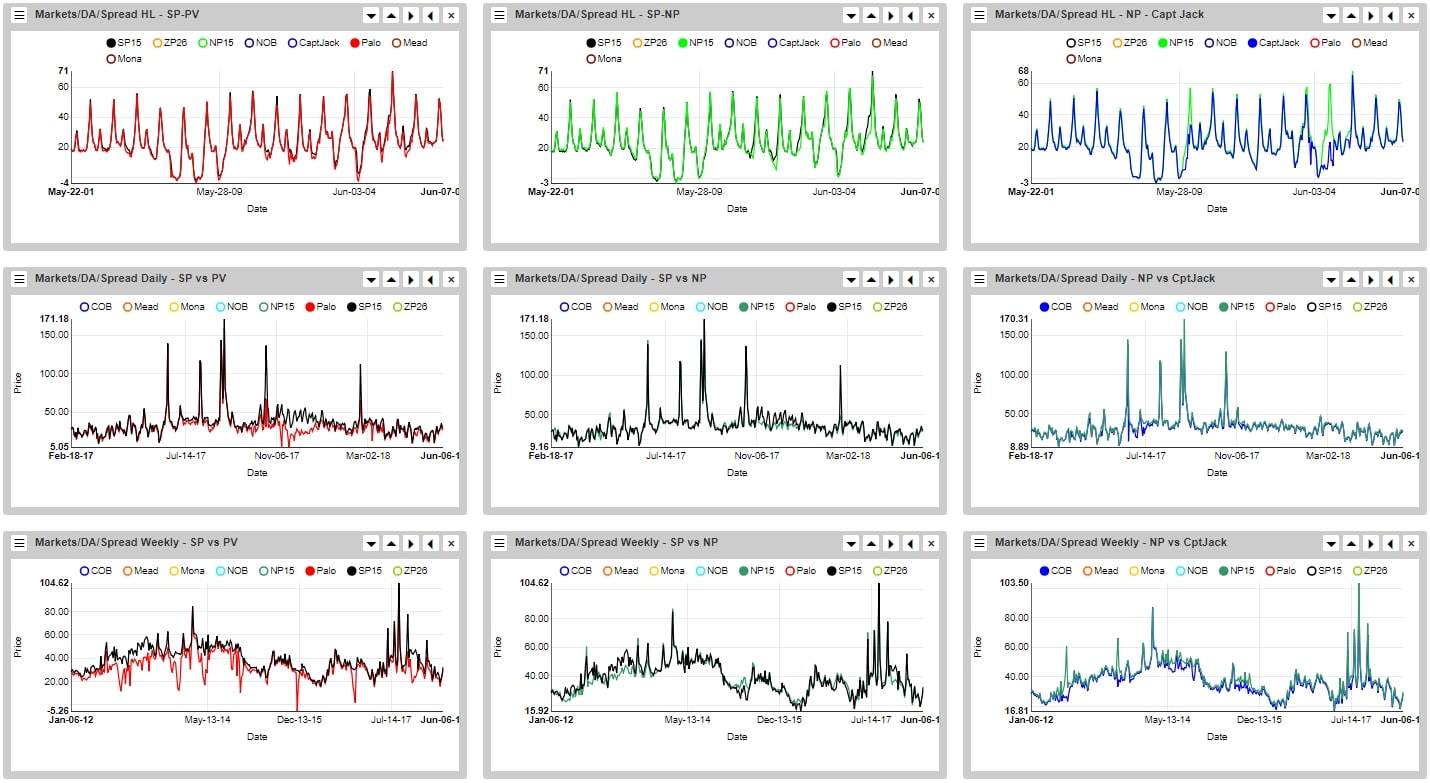 Crude is off $0.65 since late last night, essentially continuing the downward trend that started on May 22nd after peaking at $72.58. 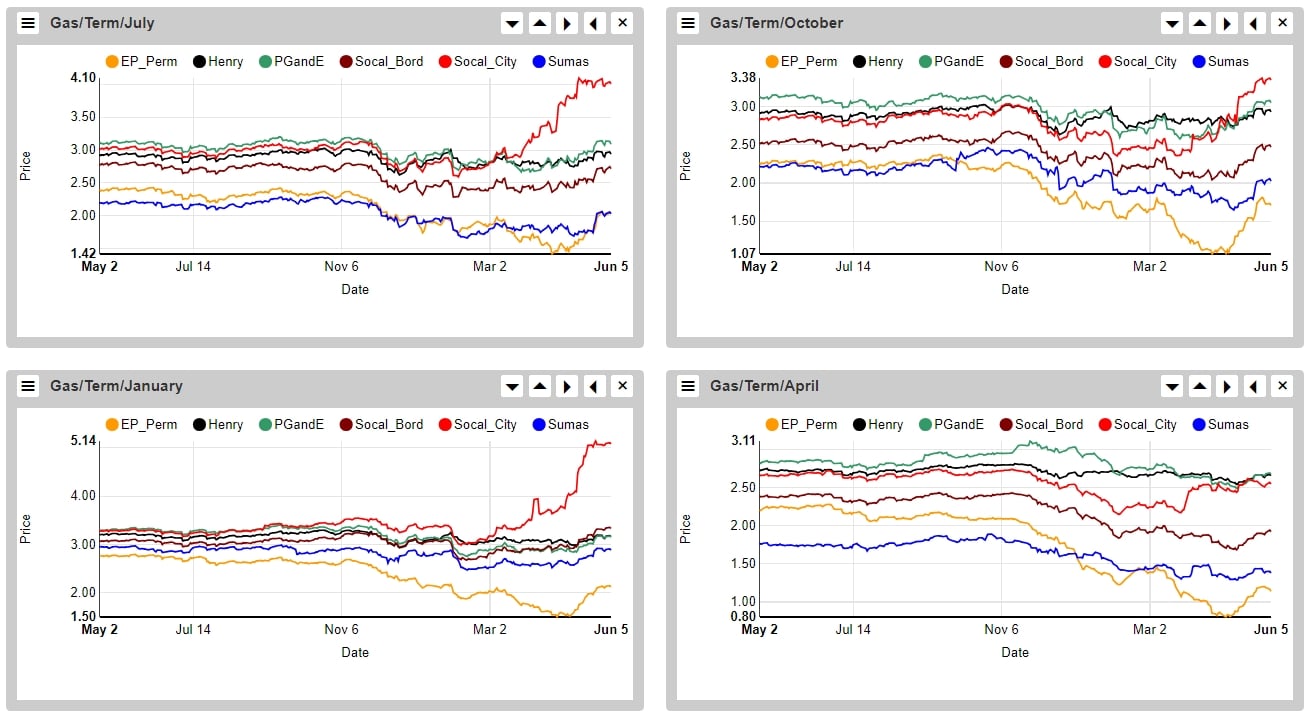 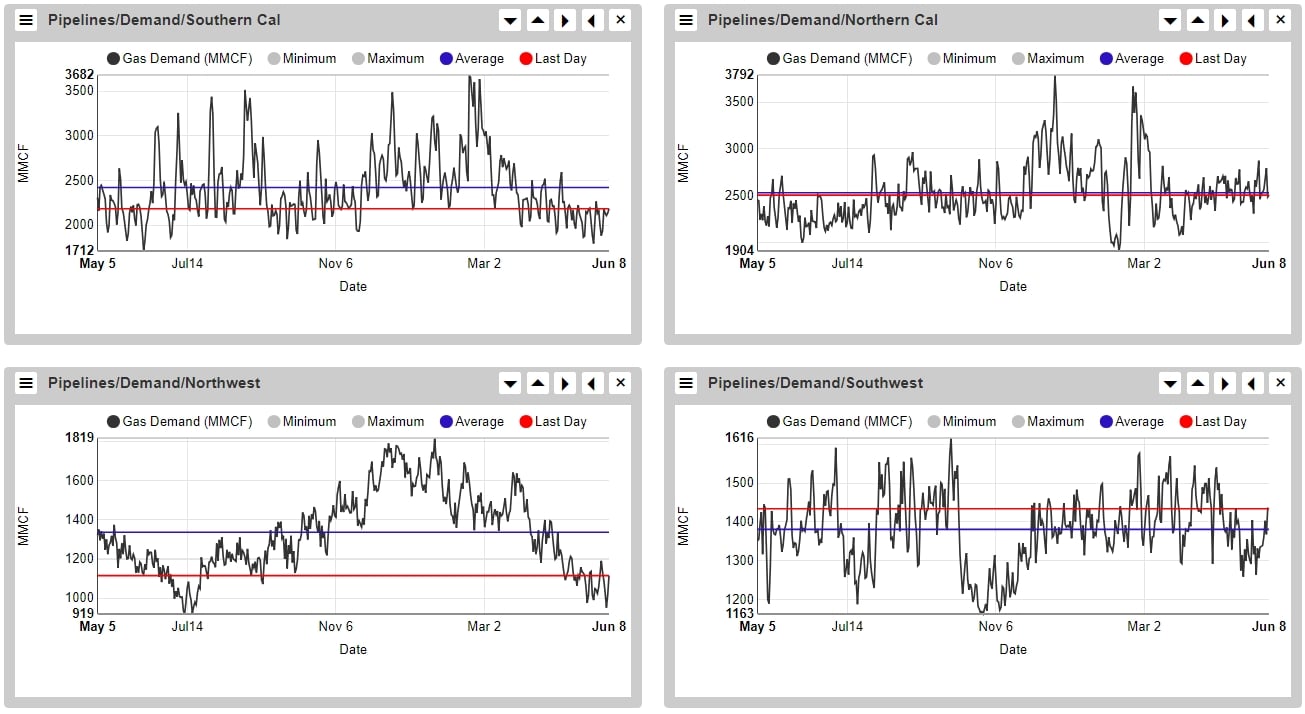 Northern California gas storage bounced back to 443,000 MCF today after dropping to 0 yesterday.   SoCal had a more modest increase of 30,000 MCF. 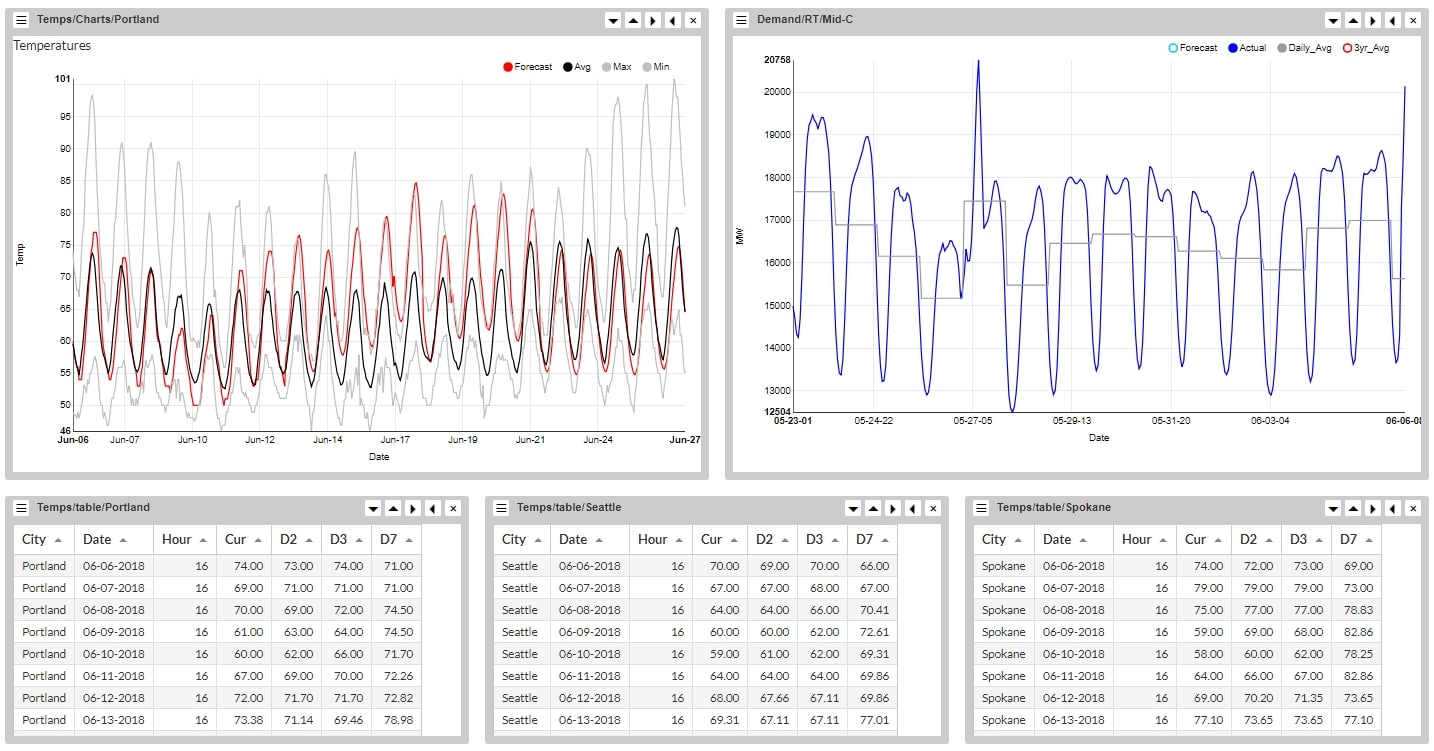 Portland is projecting a high of 77 today, three degrees above normal, but temps will take a sharp turn south across the Northwest moving into the weekend.  Saturday projects a high of just 62 in Portland, while Spokane shows up in the 50’s. 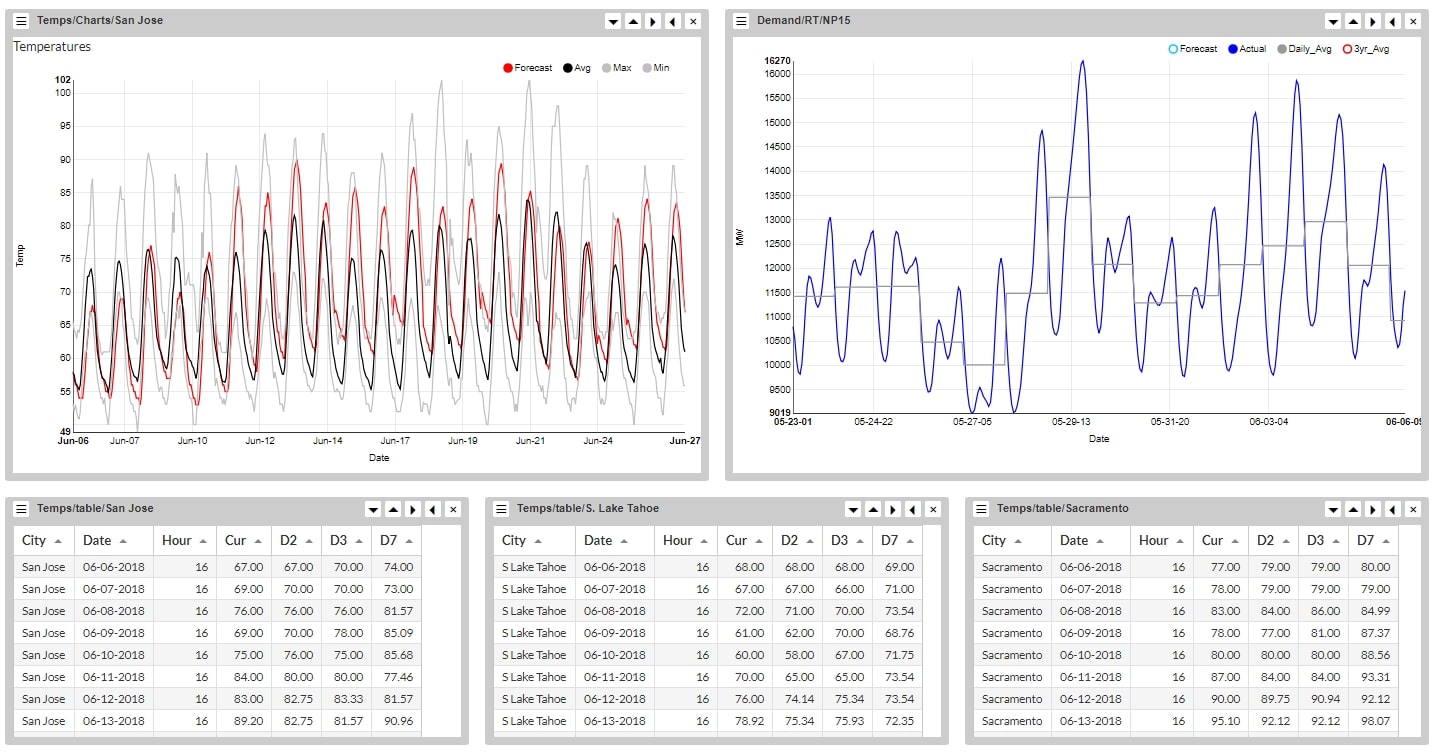 San Jose is projecting daily highs more than five degrees below normal for both today and tomorrow.  Cool temps today will soon change to 90+ degrees by next week as the 13th projects a high of 90.  Sacramento will come close to triple digits on the 13th as the current forecast calls for 98 degrees. 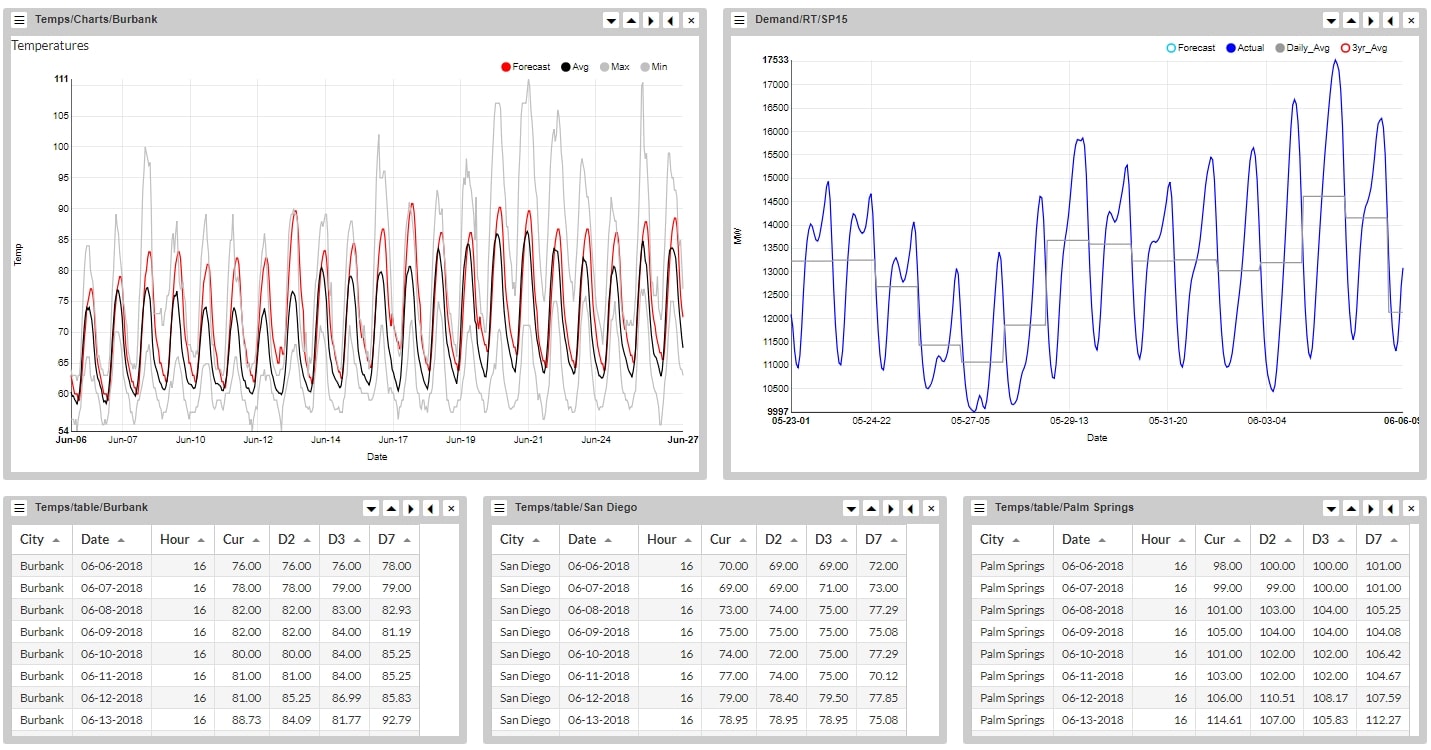 Cooler than normal temps aren’t making their way into Southern California where Burbank is projecting above normal through June.  Highs should stay in the 80’s through the next six days before the 13th brings a high of 90. 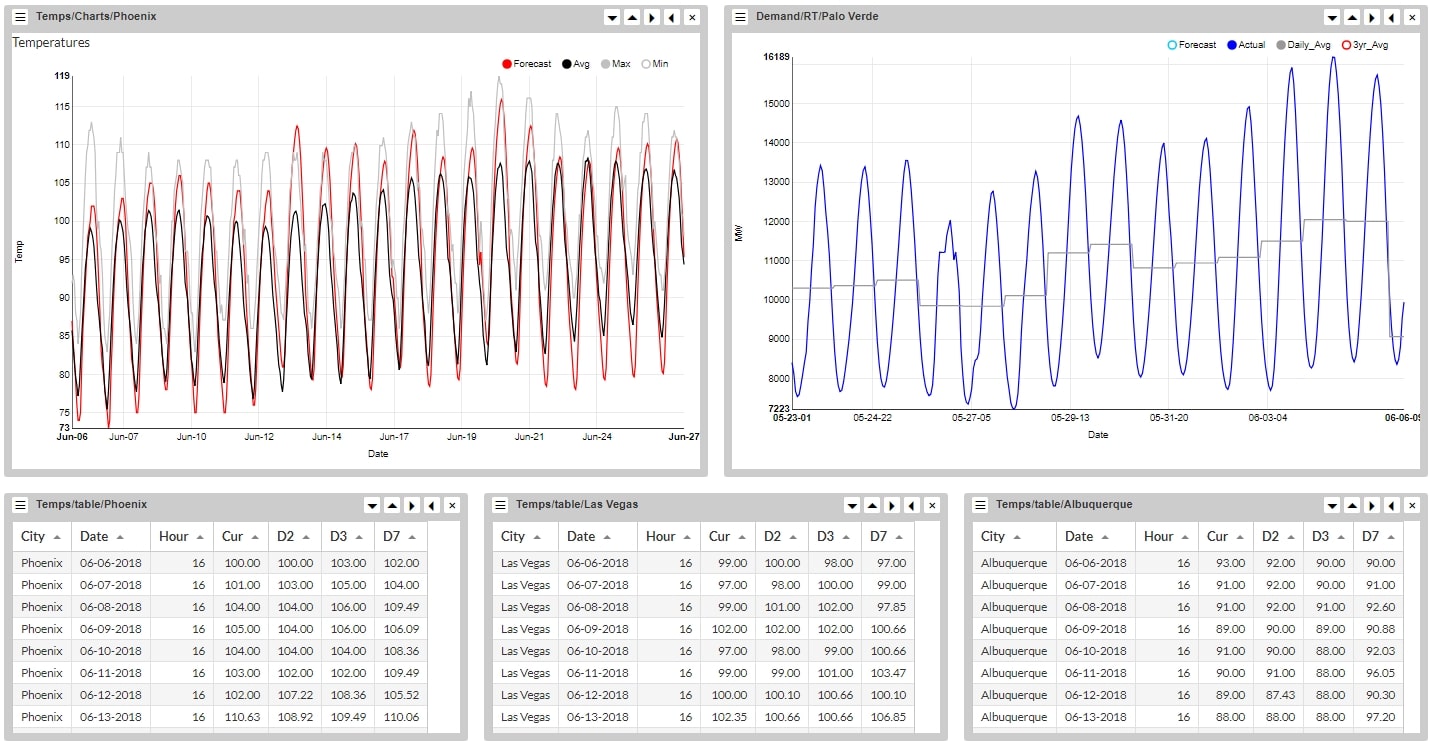 Phoenix projects triple digits through the end of the month and could reach as high as 112 on the 13th (I’m noticing a trend here).  If 112 holds up, it would be a new 10-year record for the day, eclipsing the previous high by three degrees.

California cooled off considerably yesterday, at least in terms of day-on-day movement.  The Southwest bounced back quickly from a cooler Sunday. 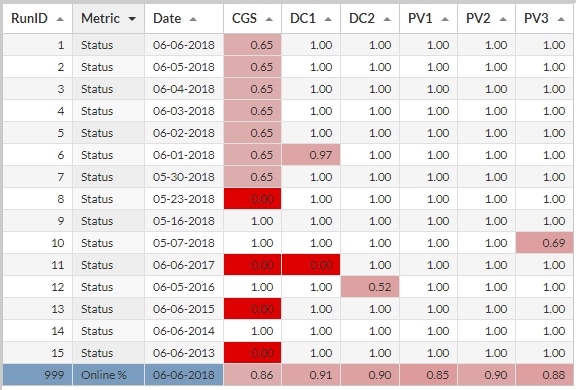 No changes in the Nuke Status report as Columbia remains at 65% while all others are generating at 100%. 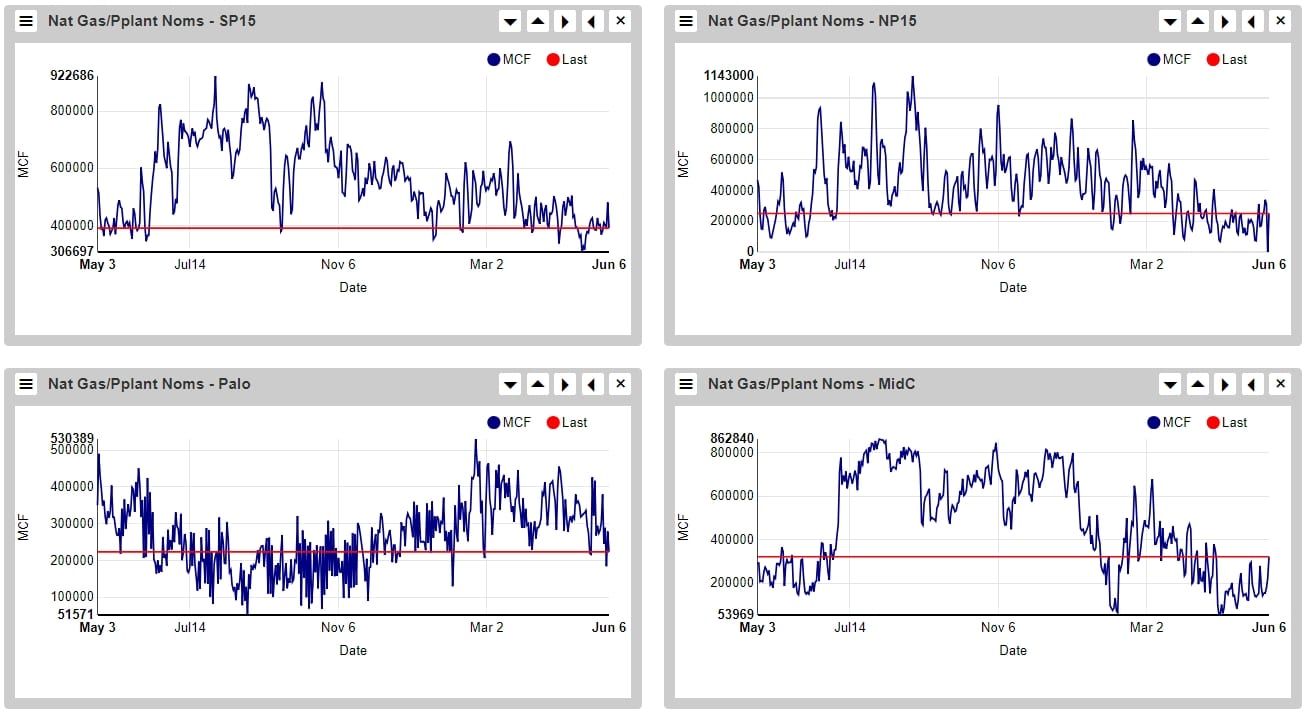 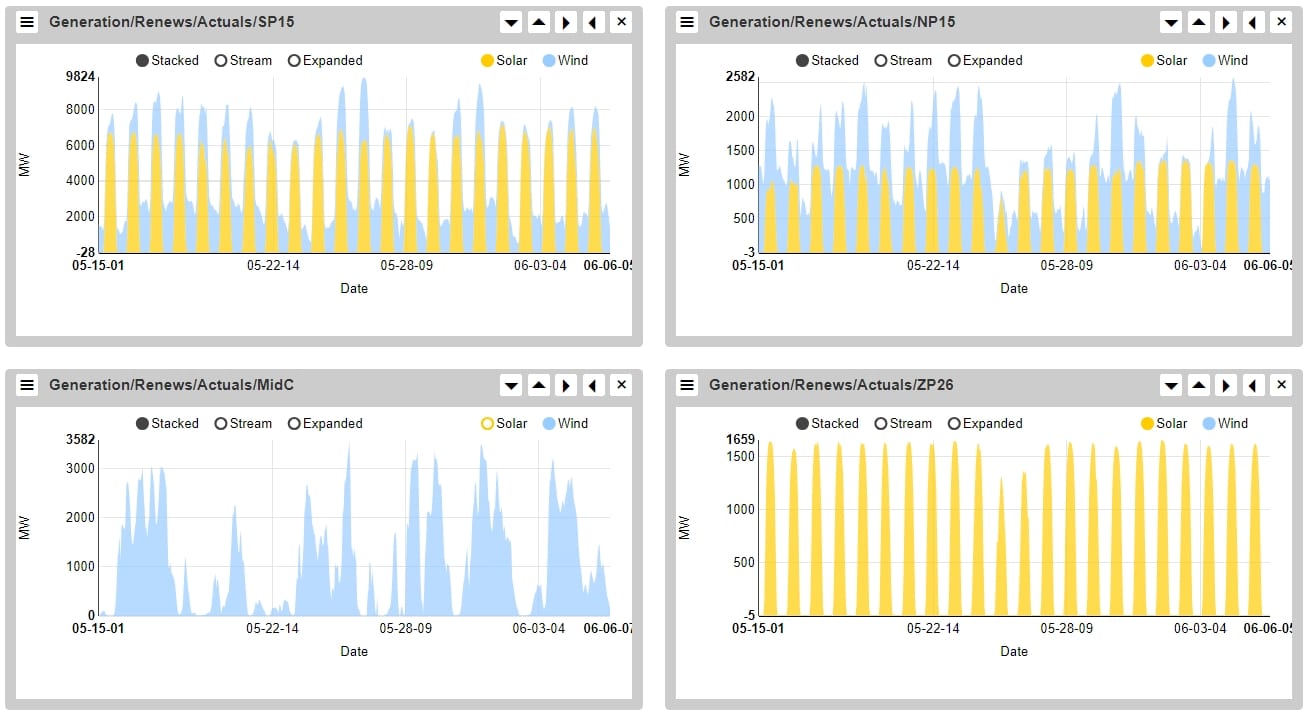 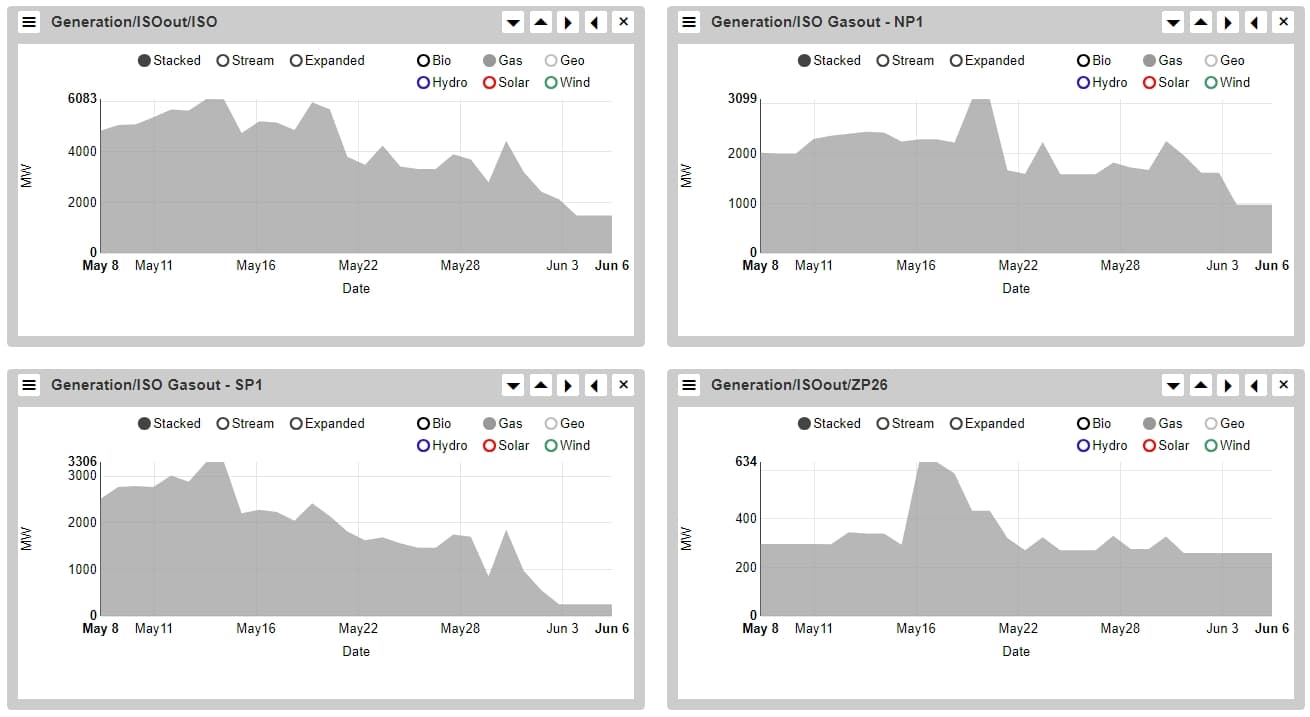 ISO gas outages plummeted to 1,482 MW yesterday, the lowest level in months as nearly all SP gas returned online (just 251 MW remain offline, down from 1,856 on the 31st). 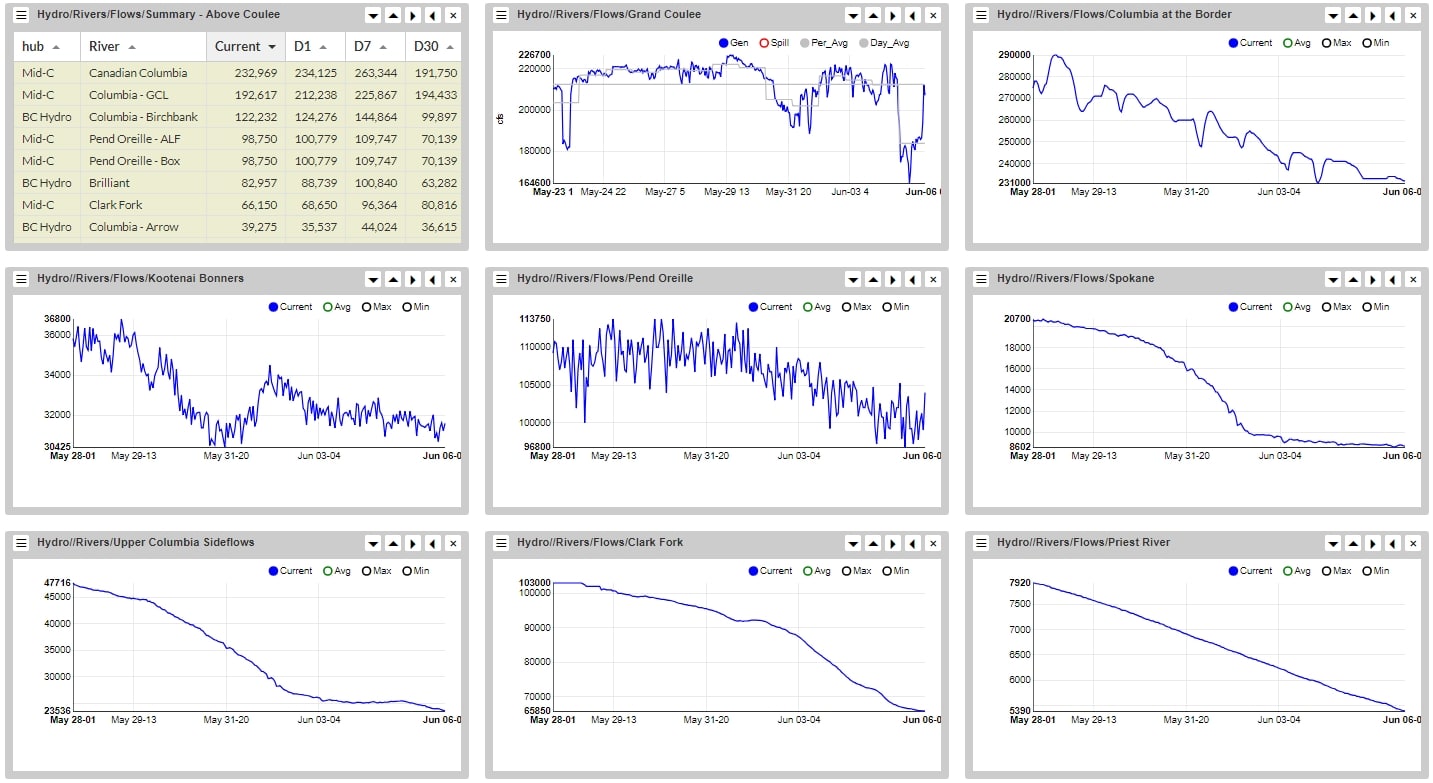 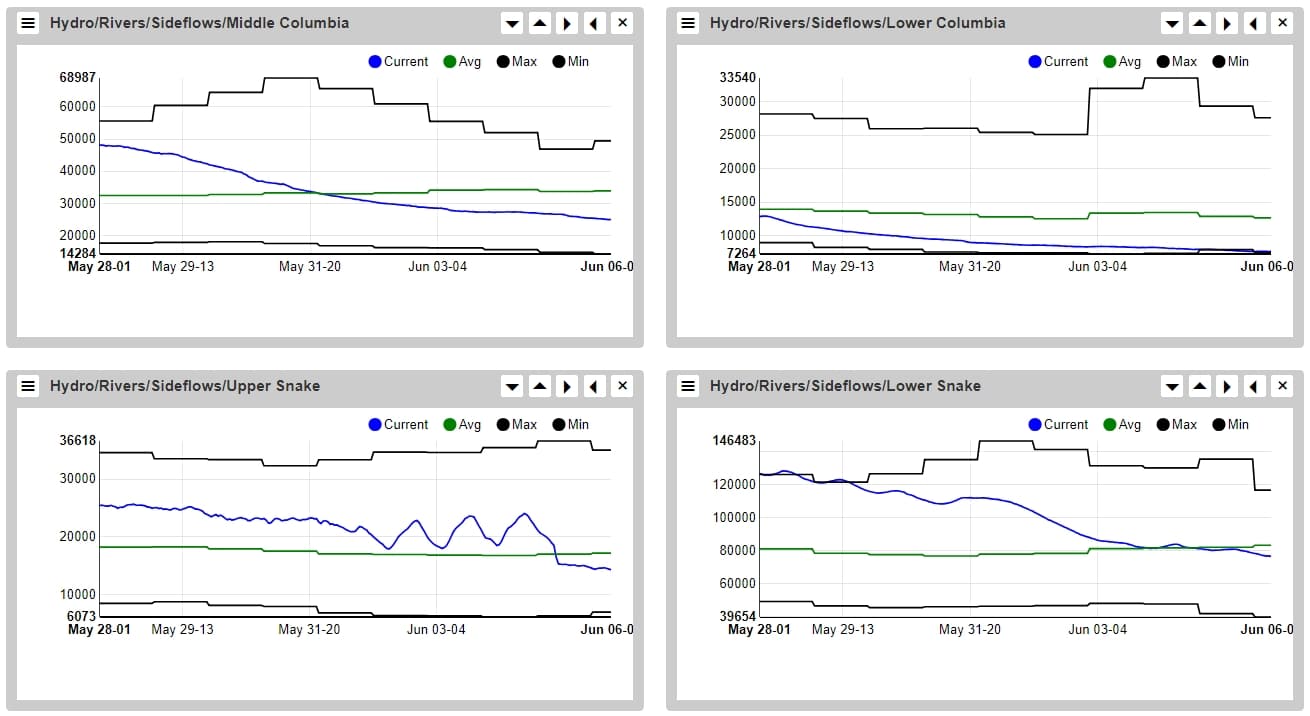 The sideflows into both Middle and Lower Columbia, as well as Upper and Lower Snake all fell below average since last week as the runoff took a downturn in earnest over the weekend.

Albeni Falls began shedding elevation on the 1st with 1.3 feet dropped as of today.  The other four charted reservoirs continue to build. 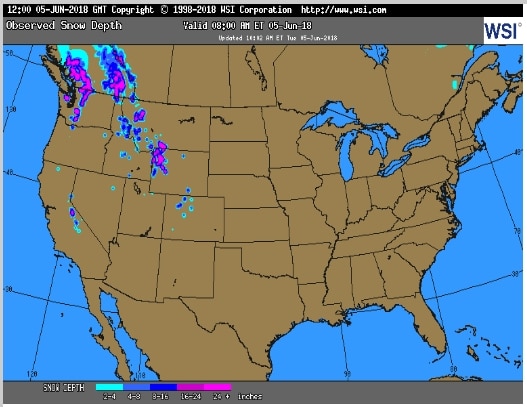 Pockets of snow remain, but the runoff has run its course for most of the West.  Still some heavy concentrations in Western Montana though much remains east of the divide. 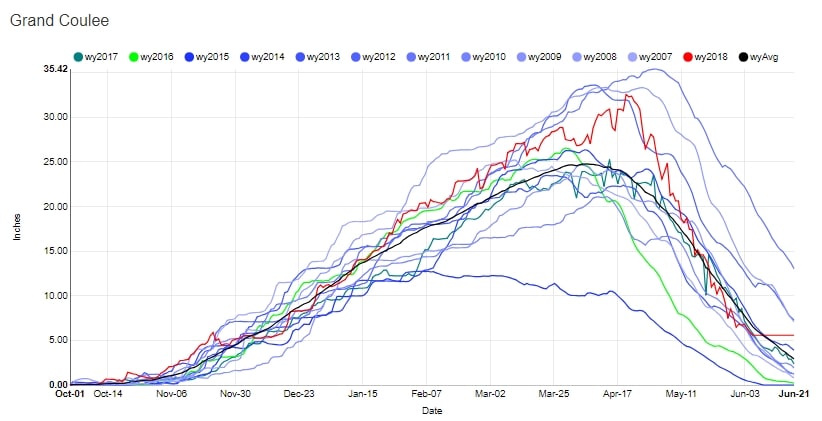 Grand Coulee snowpack levels fell below average on May 21st and sit more than an inch below normal as of today. 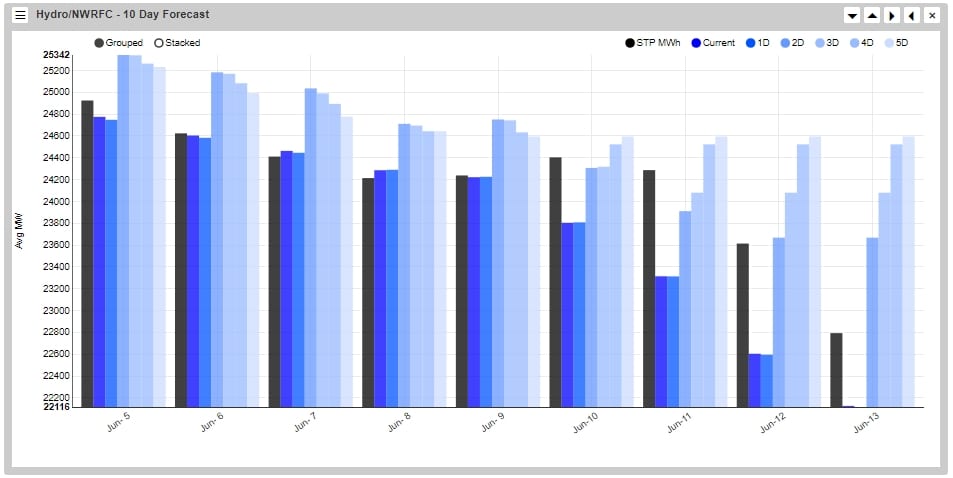 STP is forecasting heavily above the 10-Day forecast in the last five days where we see the 10-Day’s floor completely fall from underneath it.

Watch for the new TTC reductions for NOB beginning on the 18th and extending to the 25th.  177 MW were cut from TTC for each of the hours.

The forecast has been a strong indicator of market movement for the last month and with the market at a near-low and the forecast beginning to trend up, this trade could prove beneficial.

The trade has been producing wins for a couple weeks now.

Every trade has a PID (product ID) that can be called within the APT History table linked above, the one depicted is PID 686.  Hindsight is 20/20, but this at least gives you an idea of how often the recommendation has been correct.