The ISO showed some strong DA LMP prices yesterday; the SP soared to $35.00 for the first time in weeks:

But don’t get too excited, the SP only cleared at a 10k heat rate, and the weather takes a turn to the cooler side. 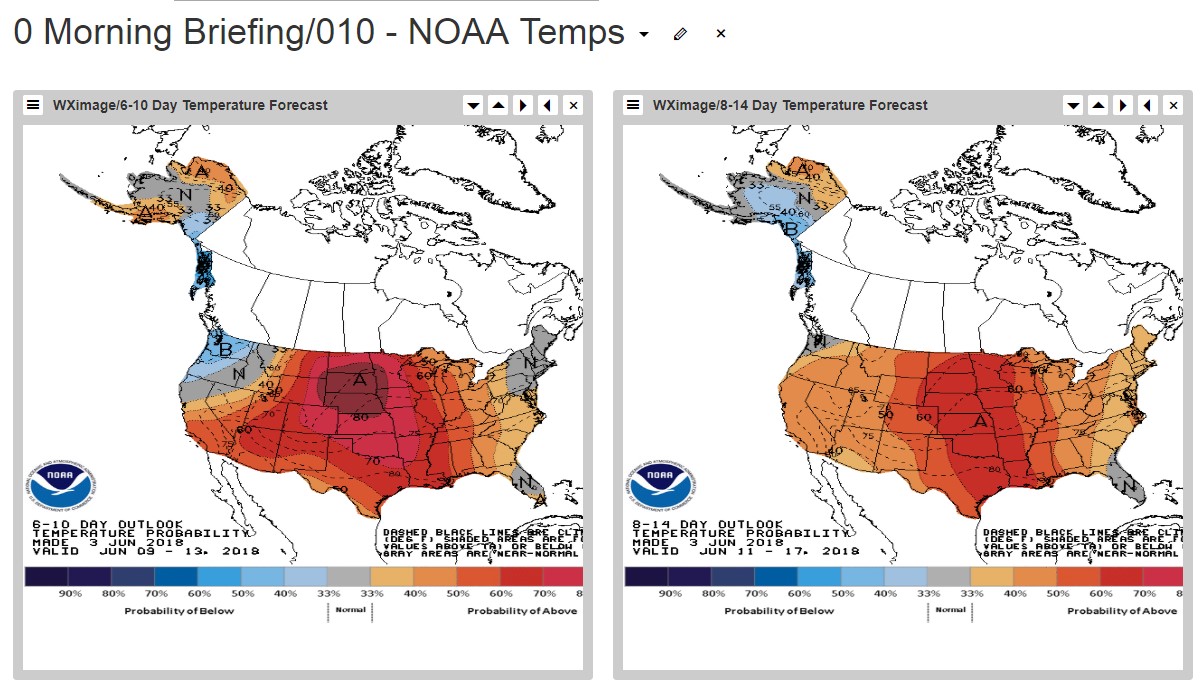 Still, a $30 handle where for weeks we’ve seen either teens or twenties. Interesting that the NP cleared $5.00 under SP and ZP cleared under NP. Palo paid for losses and cleared $33.13, driven off of a hot Sunday and expectations for an even warmer Monday. Even the Northwest is showing hints of bullishness as the amazing WY18 works its way into the Pacific. 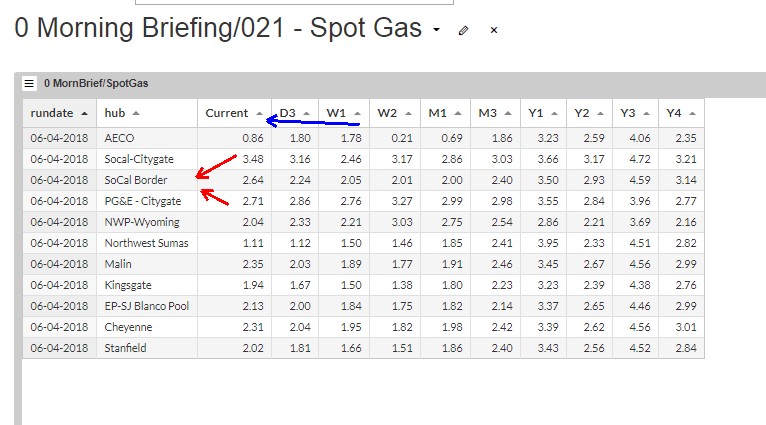 What happened to AECO? It dropped $0.92/mmbut in a day; maybe just a weekend issue. Socal Citygate strengthened, up $0.30 from Thursday and now is $0.70 over PG&E, though very little gas was on the margin in SP. 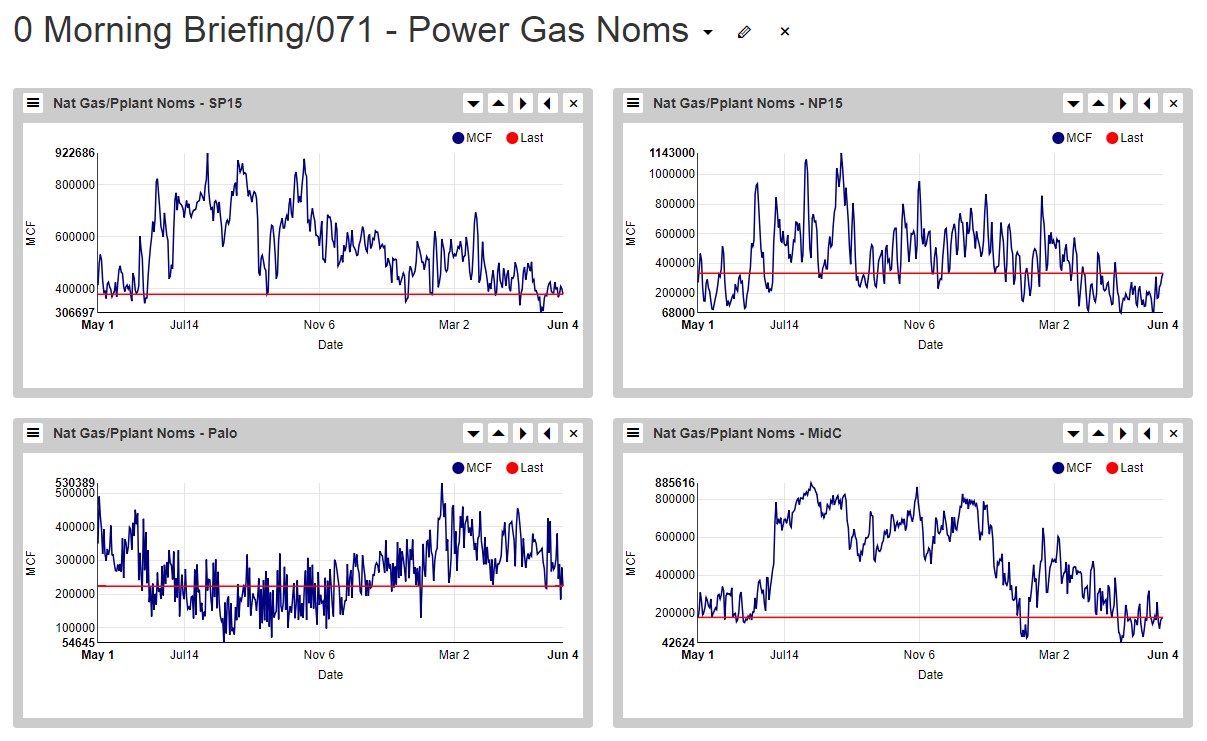 Socal is closer to the bottom than anywhere else, but last year it was burning about the same. The WECC just needs some heat.

Burbank hit the high 80s, but check out the interior – Bakersfield posted a 105, up 22 degrees from Friday. Surprising that NP wasn’t stronger, Sacramento hit 98 yesterday, hottest day so far this year. 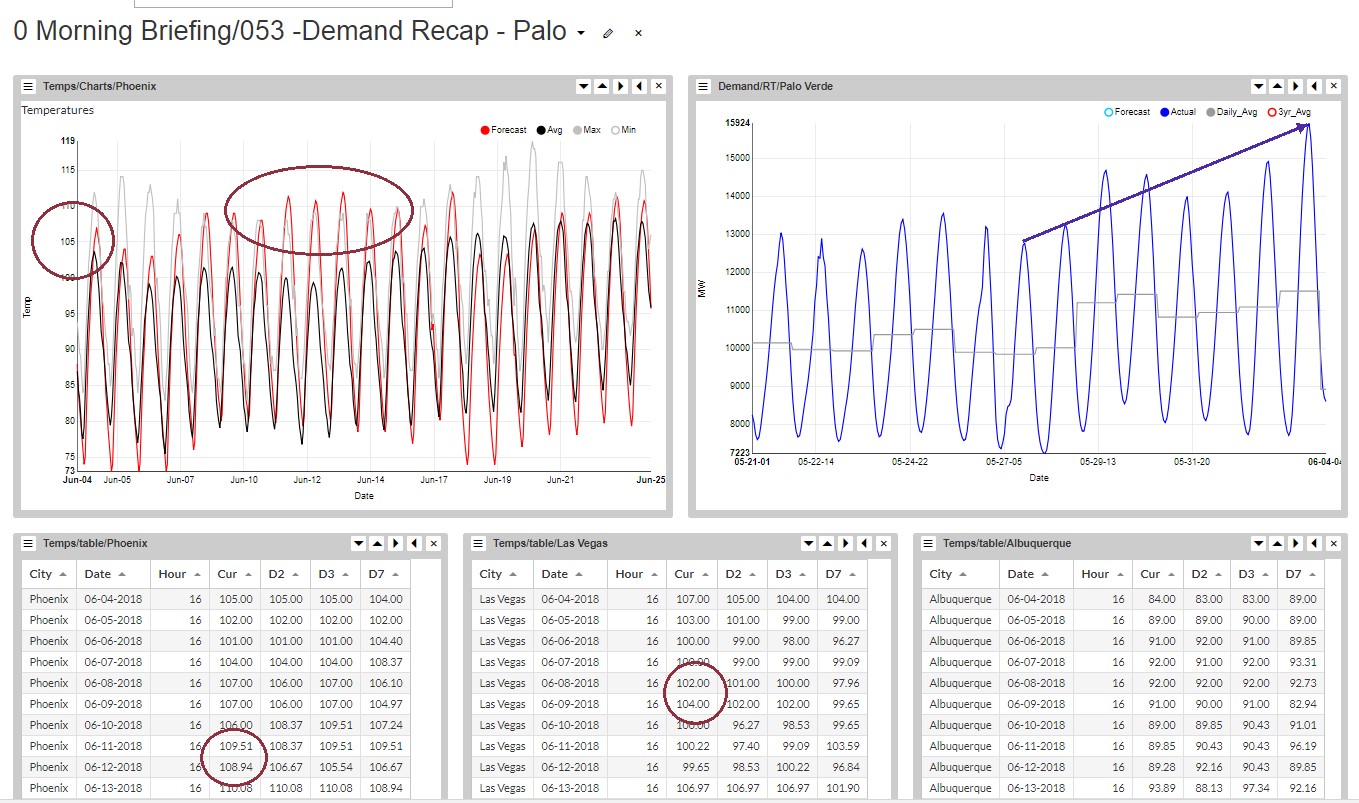 Palo Verde loads soared off a hot weekend; those temps will falter a bit, but then are set to get even hotter, perhaps north of 110 which would trigger peak loads around 18k. 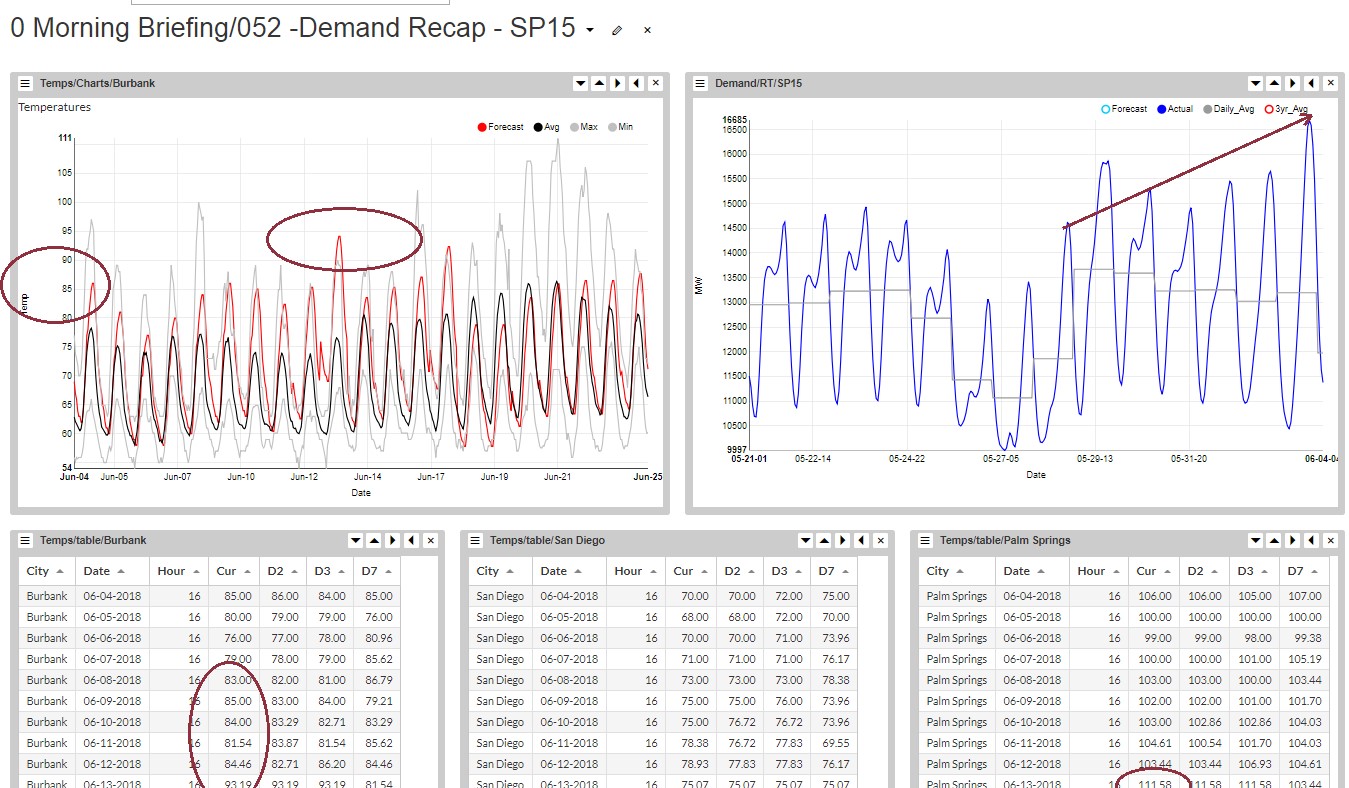 Today will be hot, the rest of the week not. Teasers in the 6-14 day, don’t bank on them just yet. 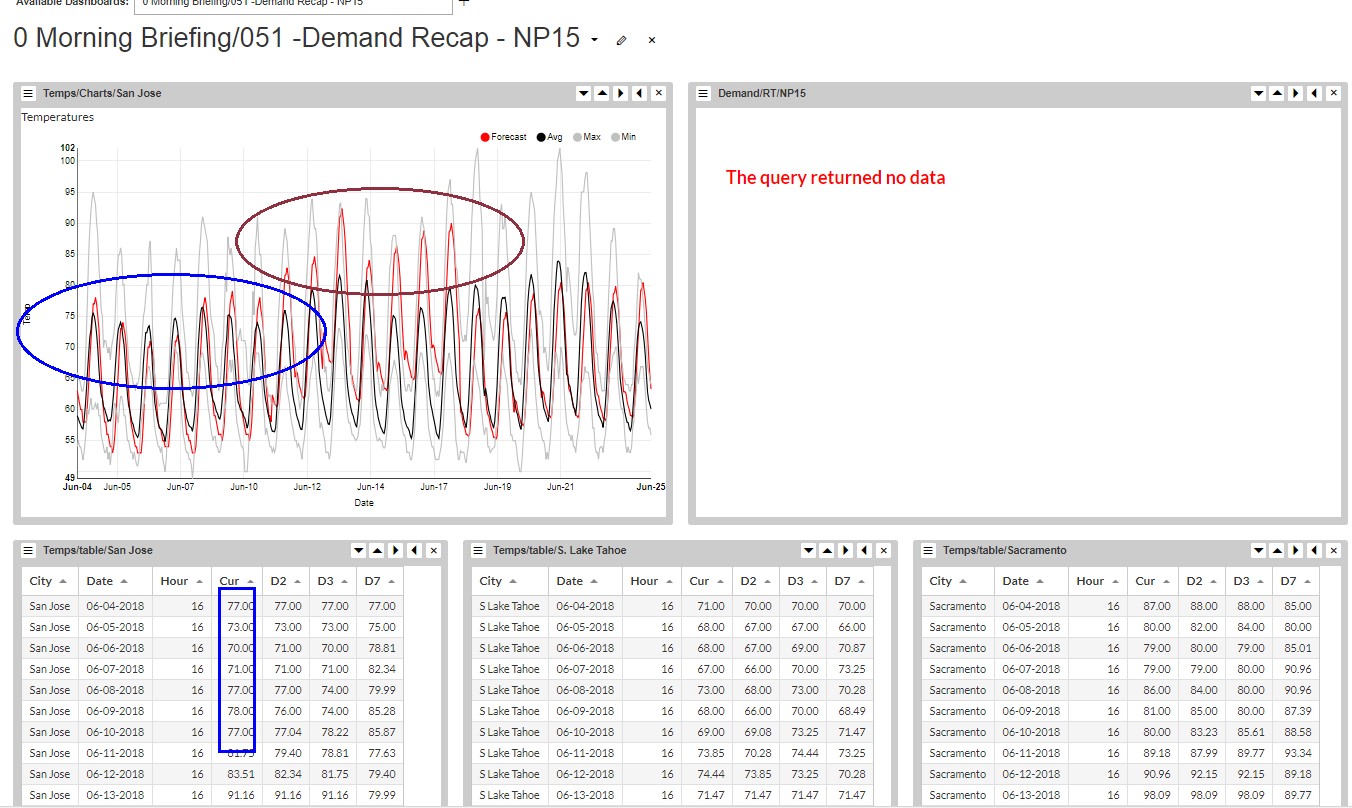 NP was hot in its interior, but the coastal load centers not so much. This week looks like averages and that 8-14 day has very bullish hints of significant heat.

Some of that ISO strength may have arisen from weak wind energy:

Both NP and SP saw total wind energy hit weekly lows over the weekend. Coupled with demand rallies, that’s all it took to post those SP $35s. 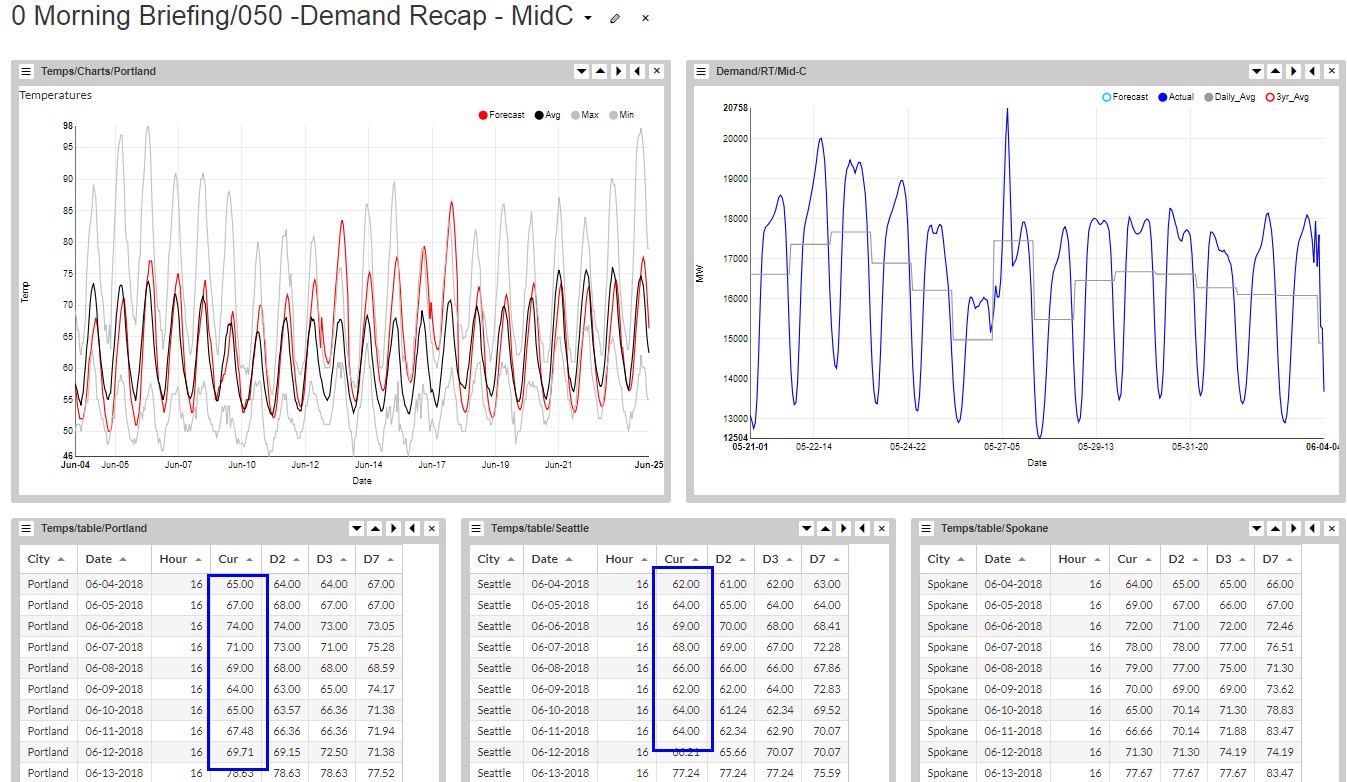 NADA in the Northwest as far as demand-based bullishness, but that region doesn’t need CDDs to drive price, it just needs to melt snow and dump water into the Pacific. Definite signs of the end of the water year, we report on those in the Hydro section. Loadwise, the MidC is going nowhere for the foreseeable future.

This long and winding Water Year 2018 road we’ve been traveling upon is reaching its end; the snow is mostly gone, and the streams are backing down. 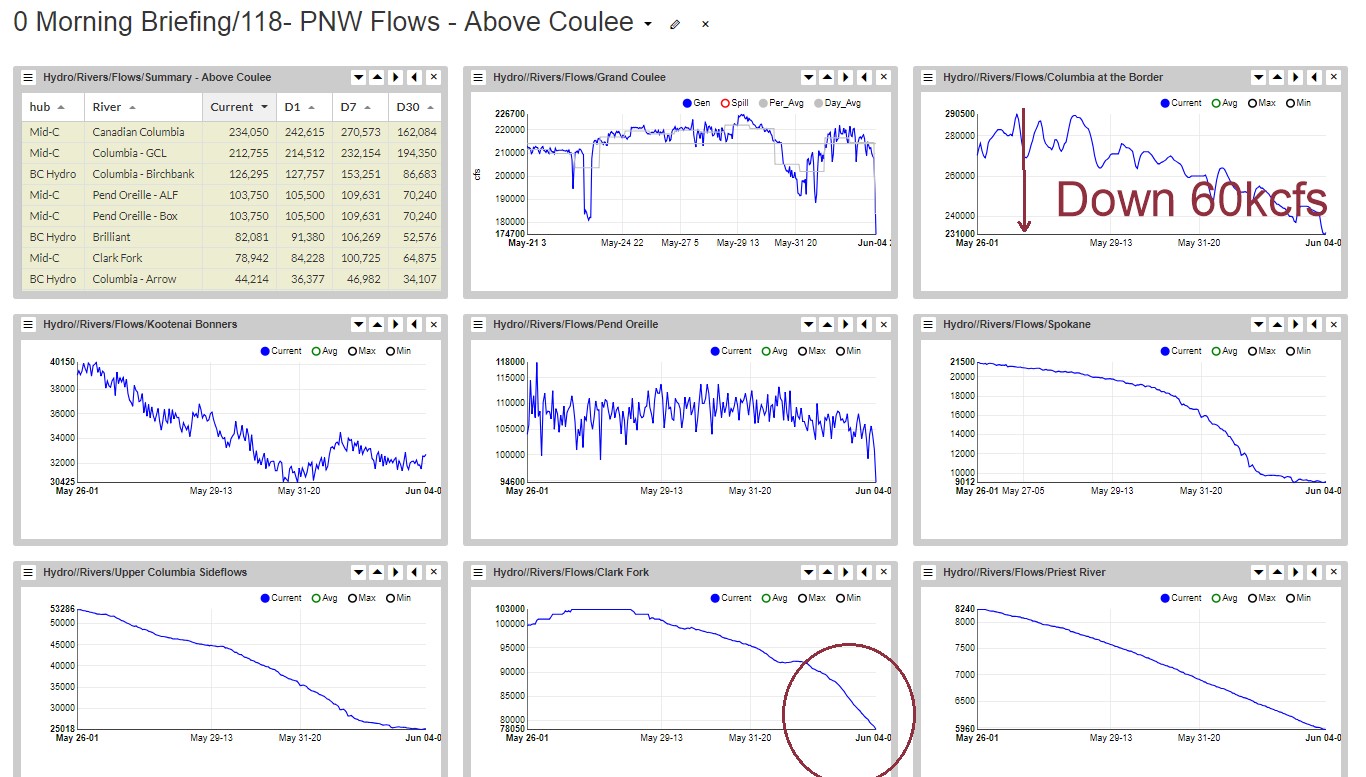 Flows on the Columbia at the USA|Canadian border are down 60kcfs in two weeks. The trend is pointing down; those flows will continue to drop. 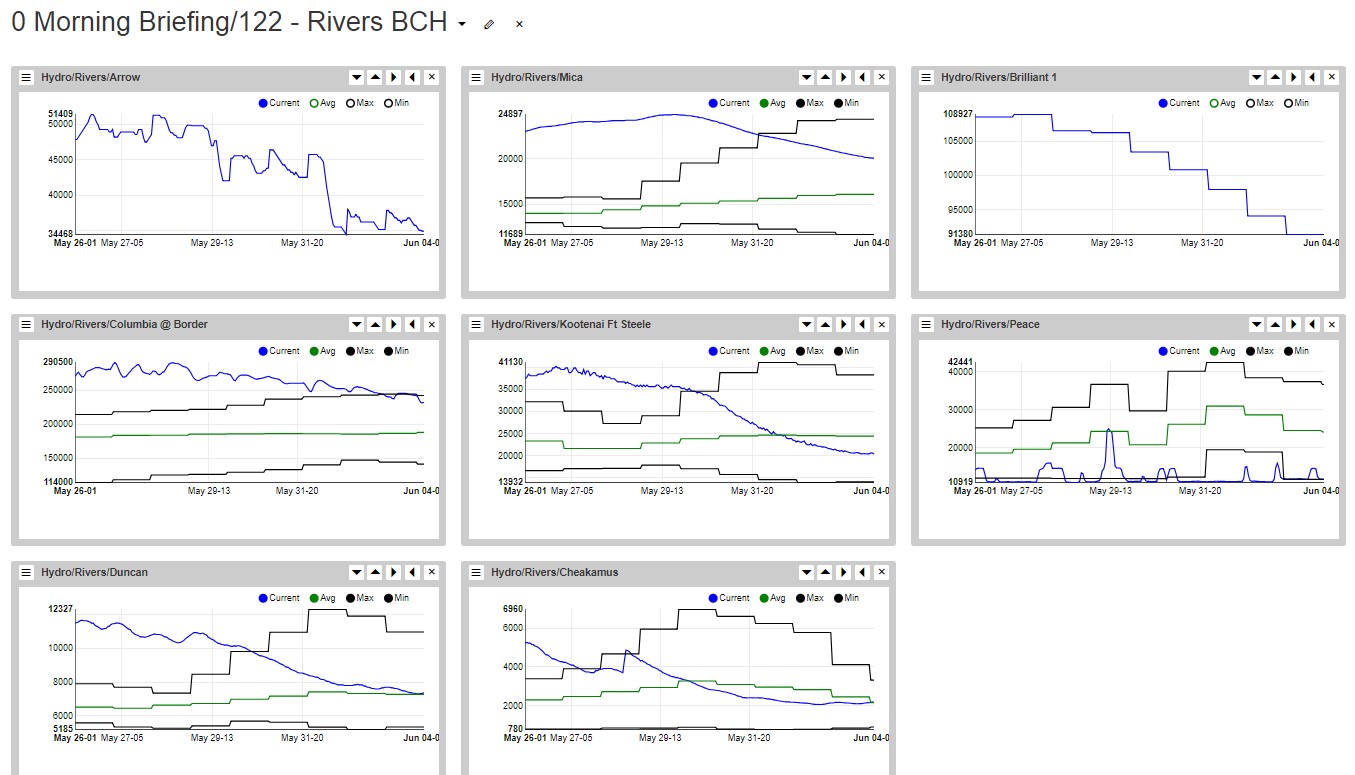 Canadian flows are off across the board; most of these are regulated, but the peak has been realized.

Coulee is sitting at 1271, just 17′ feet from functionally full, but the project is still close to hydraulic capacity, no spill any longer. The plant is generating more energy given the same water with nearly 50′ of additional head. 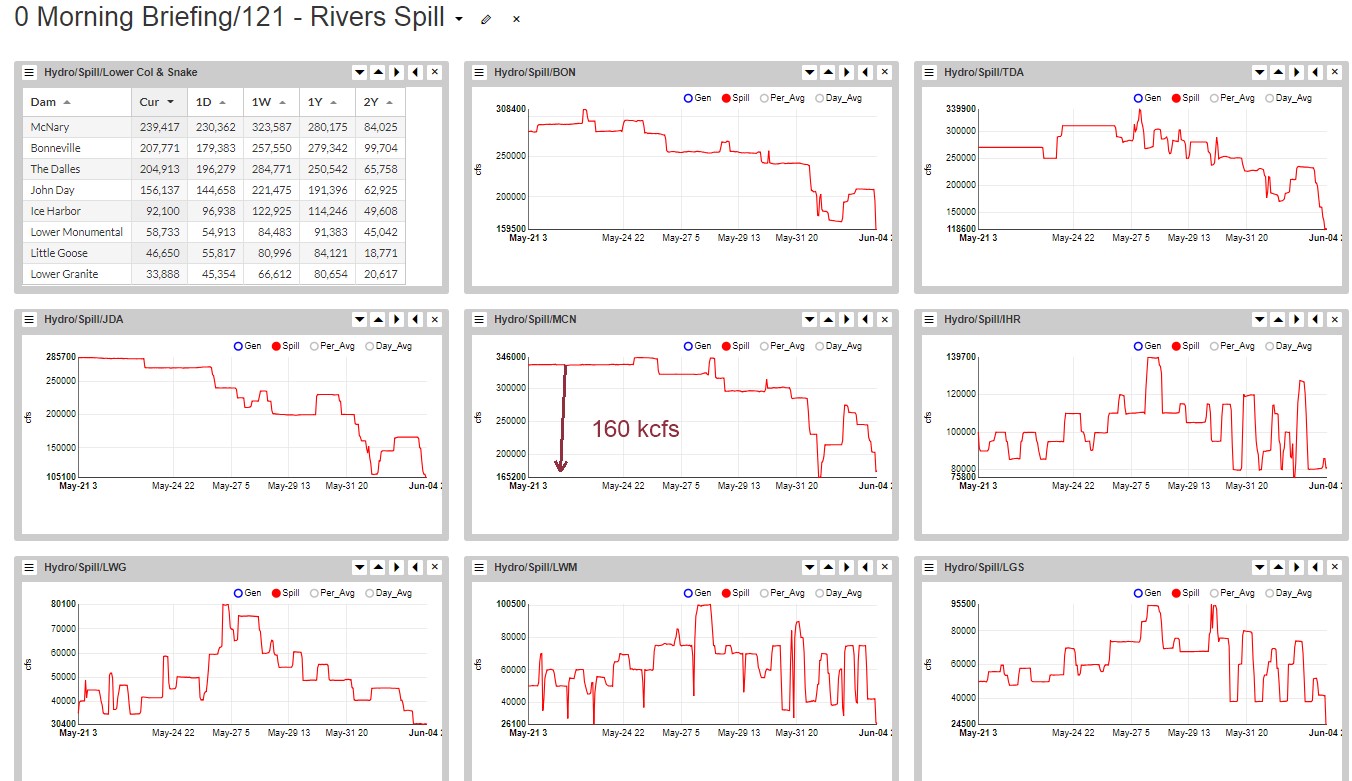 The spill is another good barometer of the water year; the spill at McNary is off 160kcfs in a week. The water year is winding down. 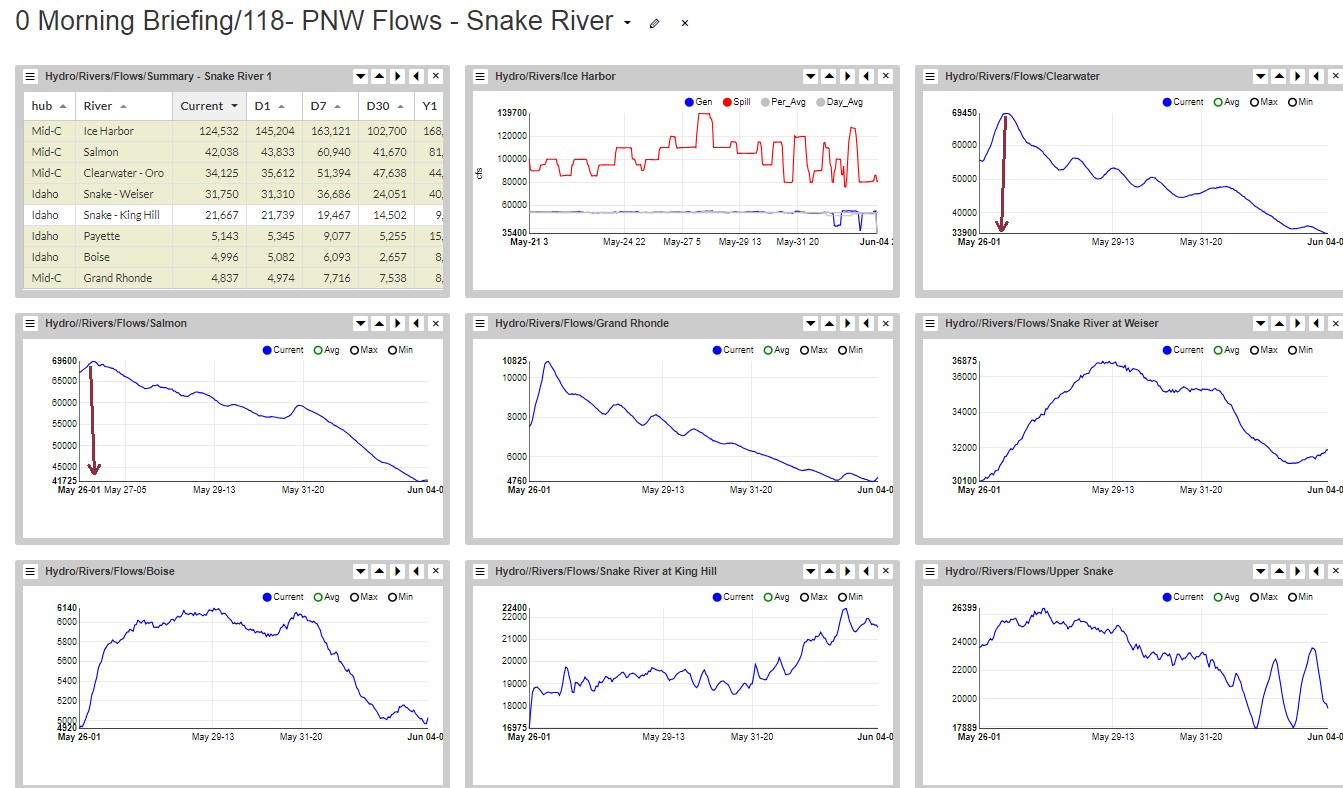 Today is STP, let’s look to the RFC’s 10 Day forecast for any tells: 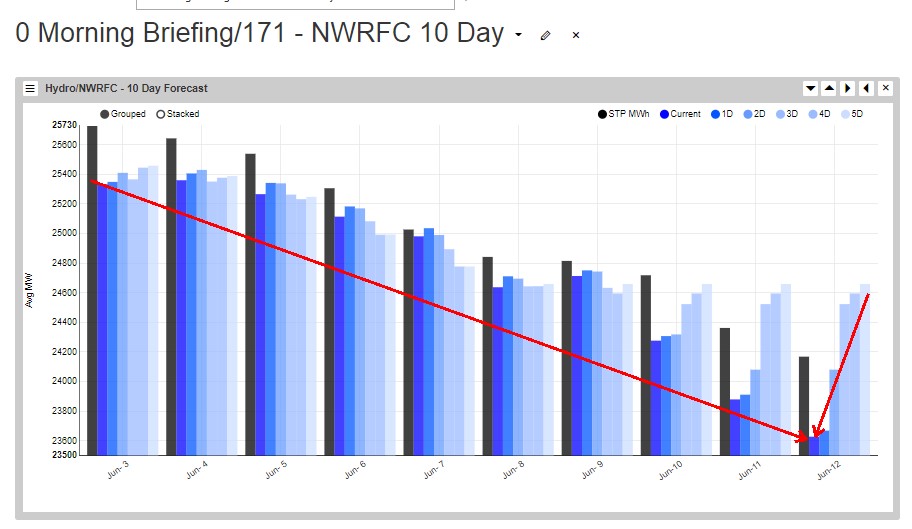 Every day is lower than last week’s STP and each day of the 10-Day is lower than the previous forecast. This suggests a bullish BOM but, as Trump so eloquently says “We’ll see.” 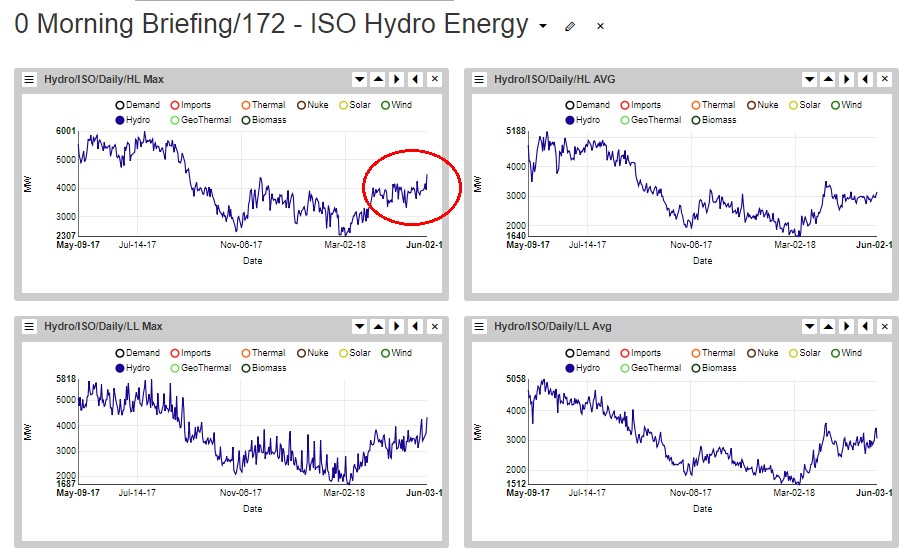 We noted small spikes in ISO Hydro energy over the weekend suggesting the system can rally to meet surprise load. Most of this swing seems to be coming from the Pit River system:

Assuming 4k is about hydraulic capacity, they are swinging the Pit from 25% to 100% on selective hours. We see no signs of that changing.

BC has a long ways to go to full; the Northwest is almost there, and California is heading into Summer ’18 with functionally full reservoirs. 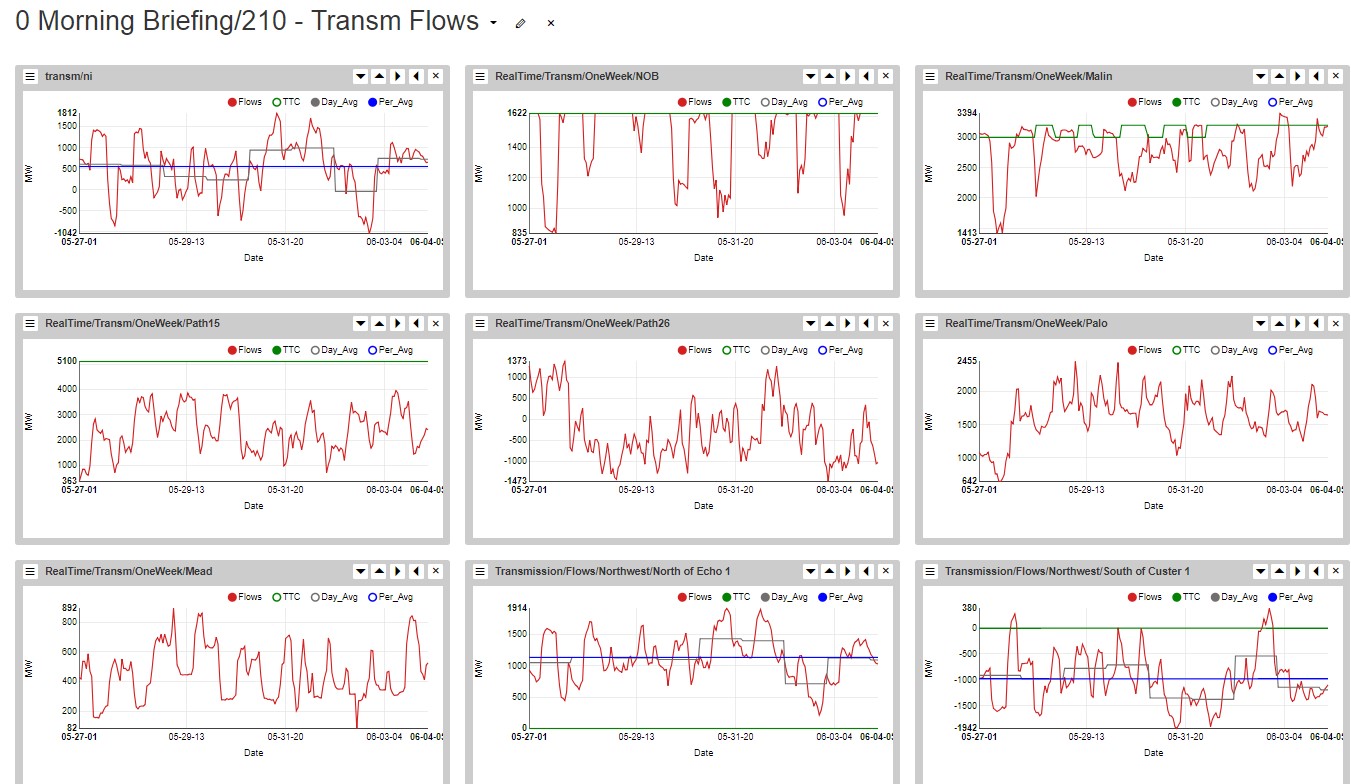 No surprises in transmission flow, but the data is always fun to study.

If you are seeking a demarcation from bearish to bullish, we may have just found that in yesterday’s LMP. The Northwest is drying up while the rest of the WECC is heating up. We’d be nervous shorts everywhere.